It’s time for Alesia Schumann vs. Lilly Sanchez to start! Due to a coaching change, a new TV analyst greets us tonight and it’s a five-time world champion.

“Hello and welcome back to the Paffen Sport Fight Night on Box TV, live at the Estrel Convention Centre in Berlin. I’m Esther Schouten and I have a sizzling final of the program for you. If you were thinking about tuning out, forget it!”

“Alesia Schumann will face Lilly Sanchez, one of the most exciting matchups of the year in women’s boxing. The local weather forecast includes a rain of bombs!”

“Schumann, 25, is a hot-blooded fighter hailing from Munich. She’s a former WBC Silver champion whose record stands at 4 knockout wins and 2 losses. The Bavarian gave a one-way ticket to nowhere to her coach after losing her title. She immediately fell for the charms of Regina Halmich, a legend of the game. Who wouldn’t?”

“Sanchez, aged 20, gives this matchup extra kick. The hottie from Mexico City has 6 knockout wins, 1 loss and 1 draw on record. The reigning Sanchez Gym champ, a naughty private club, is a big puncher whose fierce battles will scare almost anyone. Not Schumann, I guess, because I saw her in the arena a few minutes ago and she looked happy.”

“Who wins a gun fight between a bazooka and a flame thrower? Sanchez has a power game while Schumann’s best assets are speed and the counterattack, as long as she stays focused on her game plan.”

“Sanchez’ coach, Marlene, rightfully reminded me that her fighter is the favourite with much more experience against tough fighters, with a southpaw style that Schumann has not seen in the pro ranks. However, Halmich told me that a couple of months of hard work will show us a new Alesia. In addition, the last fighter who underestimated her was sent into hibernation. Something to bearin mind…” 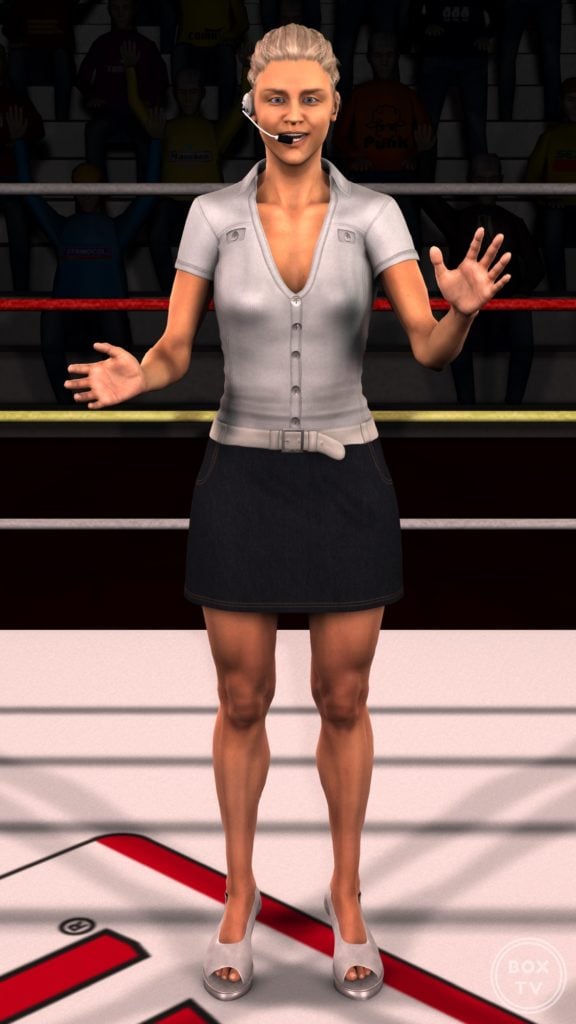 Before presentations and the fight itself, we go to the dressing rooms to take the pulse in both camps. It starts with Alesia’s.

Regina: “How are you feeling?”

Alesia: “Good! We’ve worked hard and I feel stronger, fitter. I know you will take me further down the road, but I think it’s a good start. I think I’ll do well tonight.”

Regina: “Yes. A couple of months isn’t that much time when we have lots of changes to make, but the amount of progress is satisfying. You willfight well.”

Regina fetches the gloves and other gear. A bit of mineral oil will make the skin slippery. They get ready.

Regina: “Alright, my little diva. It’s time. Let’s go out and make this a night to remember.” 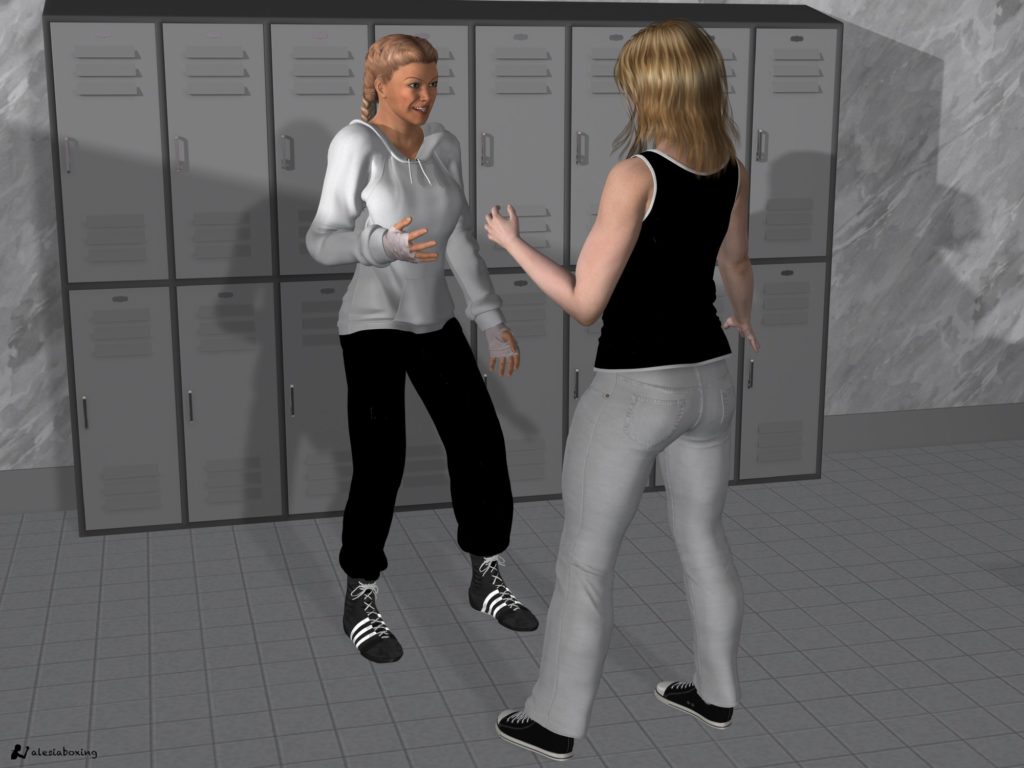 Lilly Sanchez is already dressed and ready for warmup in her dressing room. She and her mother Marlene have a little pre-fight chat.

Marlene: “I’ve prepared you well and you are the better fighter, but you must take this fight seriously, starting in the first round.”

Marlene: “We are also in Germany for the first time. The reception will be hostile.”

Lilly: “I’m prepared for anything. Trust me, mom!”

Mom is concerned when she sees the snarl. Her daughter is strong, but she sounds too confident to her taste… 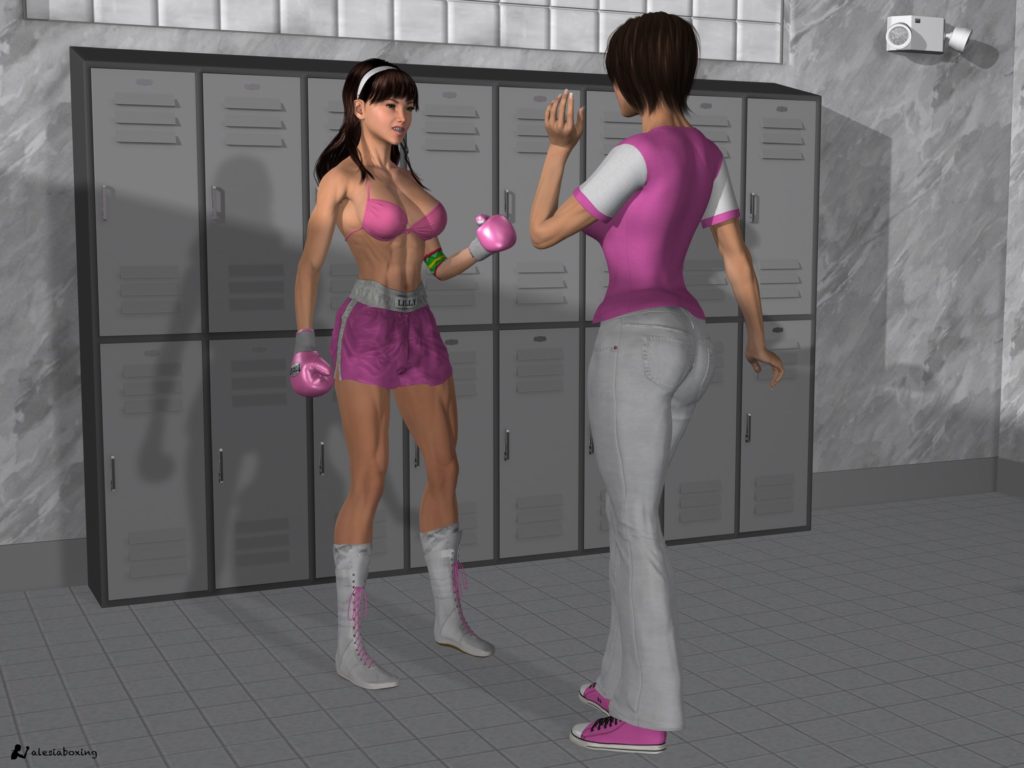 As tradition wants it, the visitor who isn’t a champion is the first to make her way to the ring.

Lilly comes out of the entrance sporting a familar pink outfit and pink Reyes gloves. She breathes confidence as she makes her traditional pose next to her mom Marlene.

Esther: “Sanchez looks the part, doesn’t she? As sexy and dangerous as a fighter can possibly get. A femme fatale.” 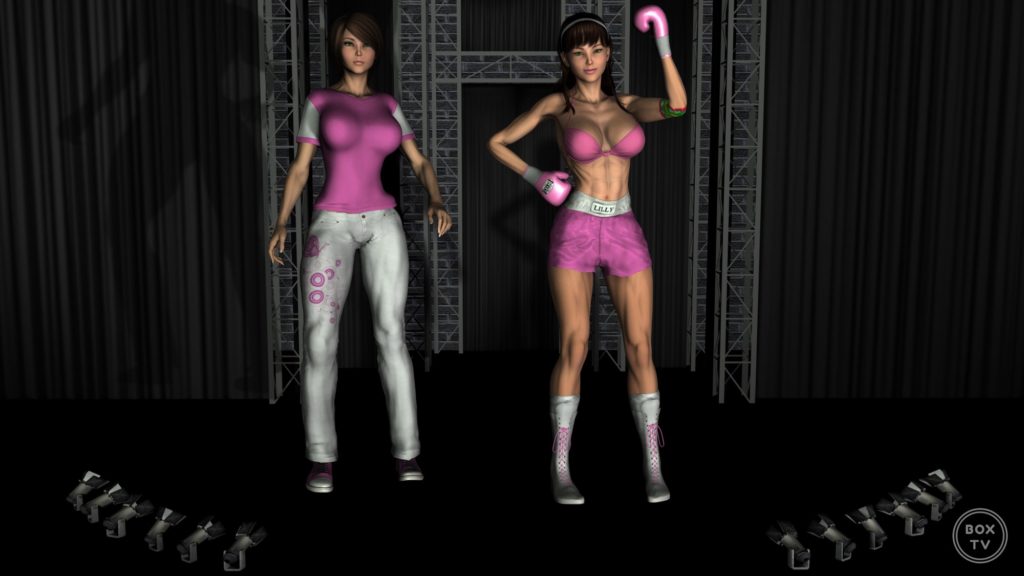 It is the local’s turn to enter the arena.

Announcer: “Please give the warmest of welcomes to Alesia Schumann, from Munich!”

Alesia and her new coach Regina show up and stop at the entrance, simultaneously posing with hands on hips. Ally is wearing her traditional colours for this fight, with black on white. All Guns Blazingby Judas Priest is playing in the arena.

Esther: “Schumann has arrived with a mix of good looks and seriousness. Look at those abs! They look like an ice pack that’s been in the freezer for six months… packed in steel.” 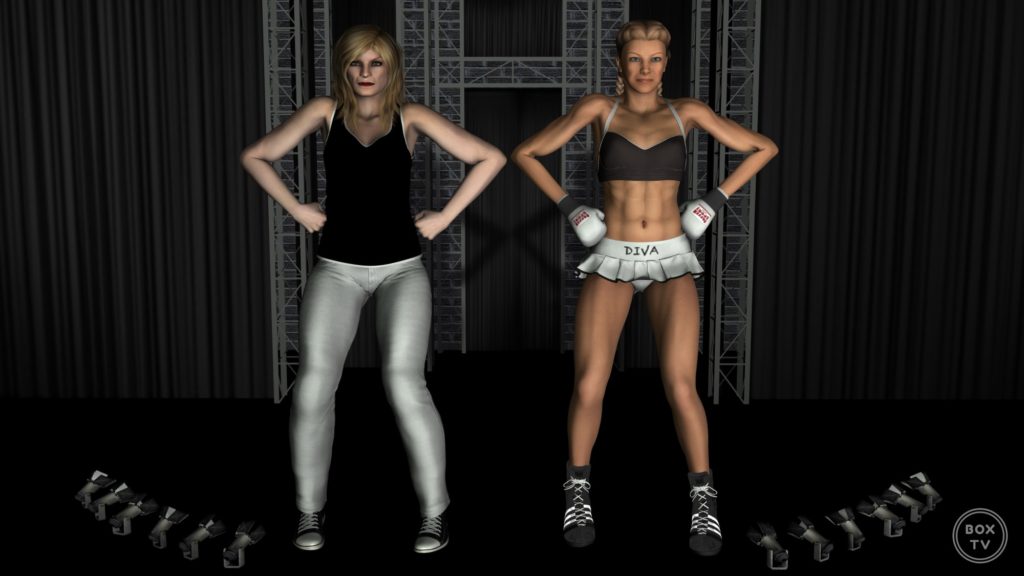 Esther: “Let’s go to the ring announcer for the formal introductions.”

Ring announcer: “Ladies and gentlemen, welcome back to the Estrel Convention Centre in Berlin, Germany. We have a superb final of the program for you! 10 rounds of boxing with a pair of fantastic fighters. For hundreds of people in this arena and everyone else watching around the world, it’s showtiiiiiiime!”

The crowd cheers and applauds mostly for Alesia ahead of an unexpected, big matchup. Both camps await as the ring announcer gets ready to introduce the visitor. 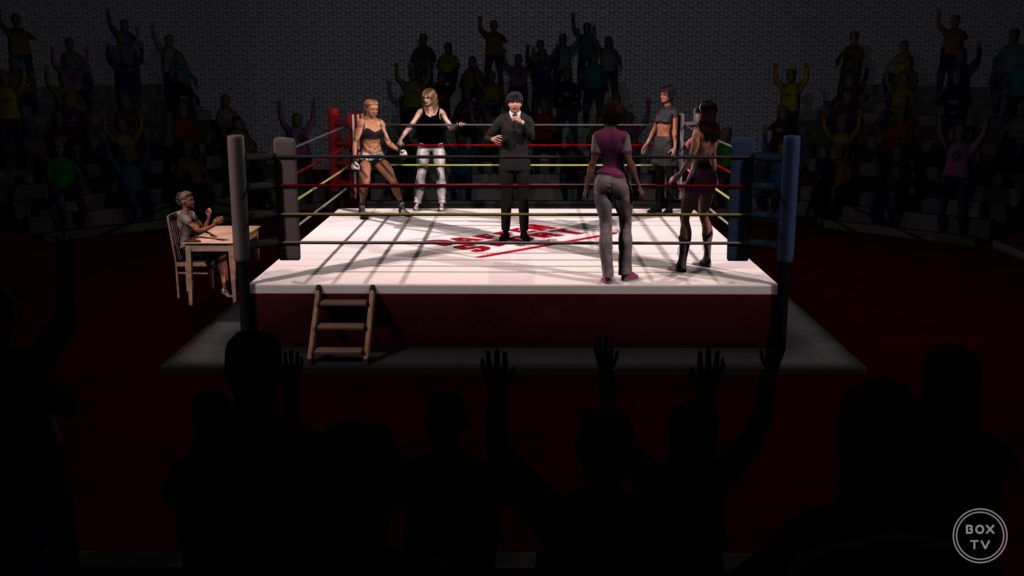 Ring announcer: “Introducing first, fighting out of the blue corner… she is wearing pink trunks with white trims, a pink top, white boots and pink gloves. Her professional record stands at 6 wins, all of them coming by the way of knockout, 1 loss and 1 draw. Aged 20, from Mexico City… Lilly ‘Aztec Princess’ Saaaaaaancheeeeeeeezzz!”

Much to the Sanchez camp’s surprise, the German crowd gives the visitor a warm reaction. Lilly raises her left arm to salute the audience as her coach and mom Marlene claps.

Esther: “There’s no doubt that Sanchez made fans across Germany with the fights that are available on YouTube. That means she can’t play the ‘us against the world’ card tonight.” 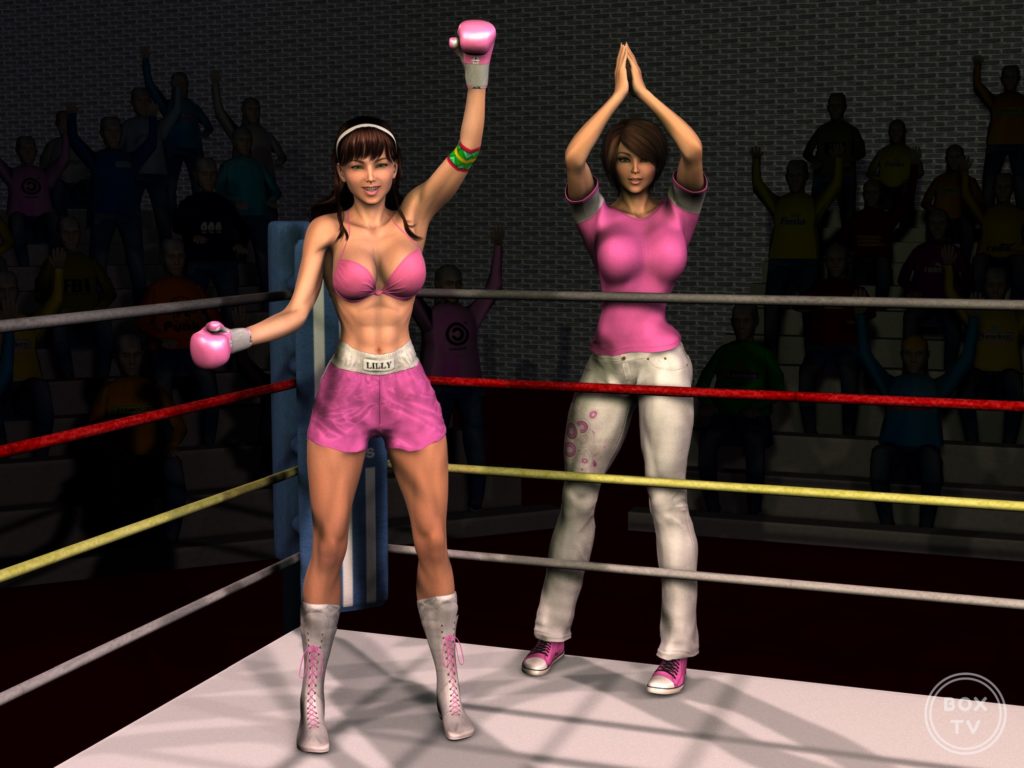 Announcer: “Her opponent across the ring, fighting out of the red corner, is wearing a white skirt, a black top with white trims, as well as black boots and white gloves. She hails from Munich. The former WBC Super Lightweight Silver champion has 4 knockout wins and one loss on her record, and ranked at number 10 by BOX! Magazine. She is the Fierce Fraulein, the Queen of Uppercuts, Alesia ‘The Diva’ Schuuuumannnnnn!”

The crowd explodes, giving its backing to the local fighter.

Alesia keeps throwing punches in the air while staring at Lilly, not even saluting the crowd.

Esther: “Schumann is not simply focused. She looks as cold as ice.” 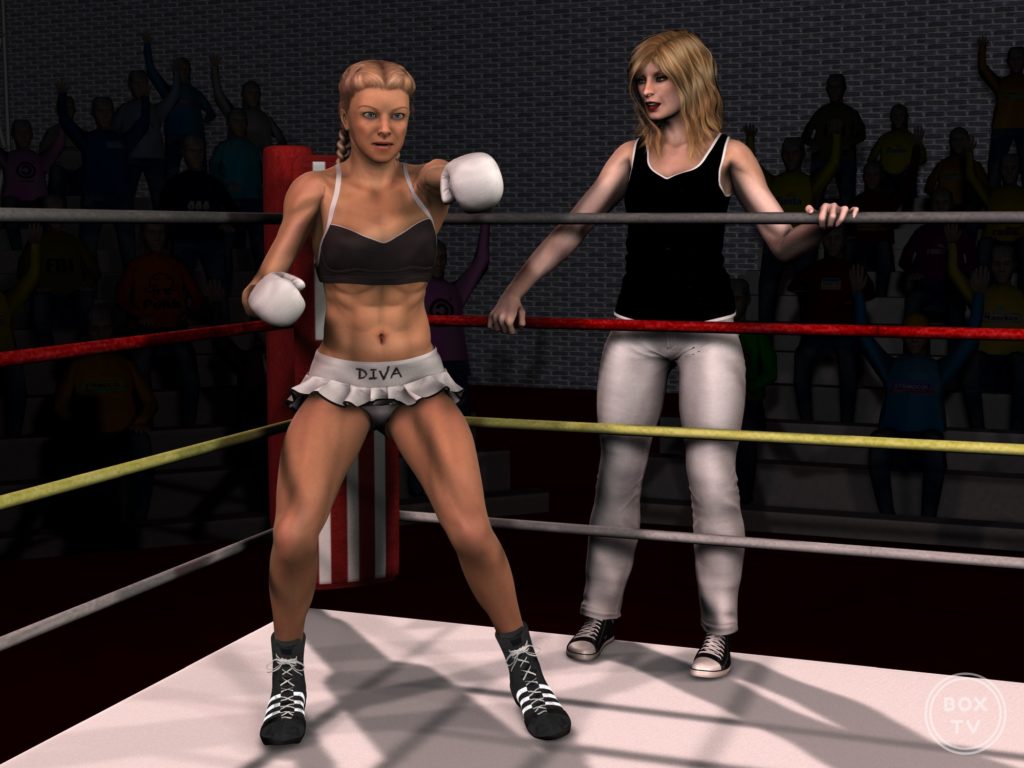 Ring announcer: “And your referee, in charge of the action once the bell rings, is Kanti Agrawal, from New Delhi in India.”

Kanti smiles at the camera and waves, getting her own applause from the crowd.

Who is Kanti? An original character created by AlexBoxer. Kanti means “Lovely” in the local language, and the name sticks well to her because she is indeed very lovely, with a great taste for fashion. She comes from an upper class family in India. Her short amateur career was inspired by amazing Indian fighters such as Mary Kom. After that, she stayed in boxing by becoming a ref in amateur tournaments, underground fights and then the professional ranks. She is making her way up with calm behaviour and this fight will be a good test.

I asked Alex to give me permission to use Kanti, not because of any problem with my main referee Rebecca, but to add a little diversity to this feed and because I dig the character

I created a Japanese fighter early on, and featuring Lilly as well as Kanti in this fight is a step further in that direction. I have plans to create more people of colour in the future. 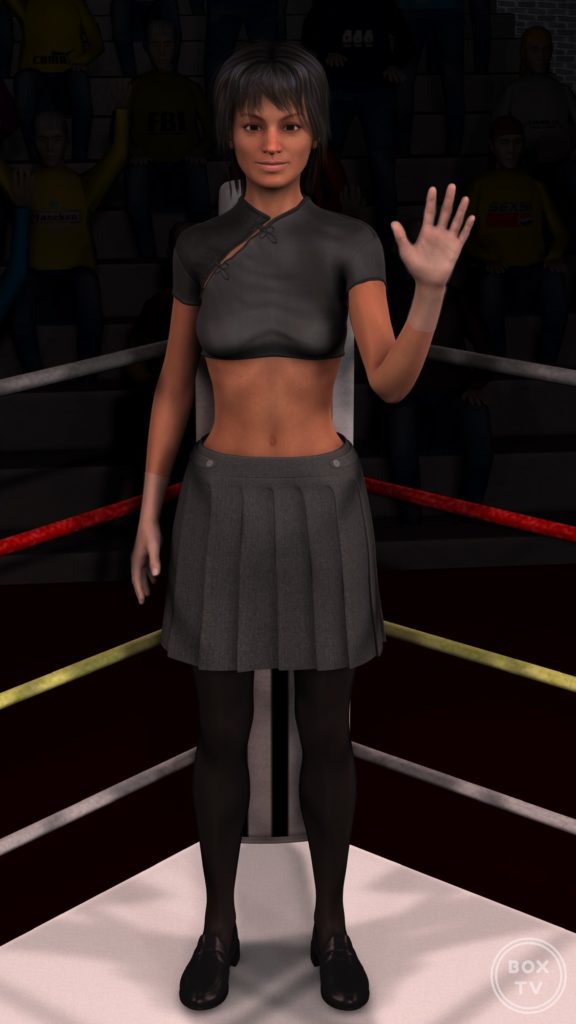 Referee Kanti tells Alesia and Lilly to come to the middle of the ring to remind them of the rules and touch gloves.

Kanti: “We went over the unified rules in the dressing rooms. This fight is scheduled for 10 two-minute rounds. There is no three knockdown rule. There is no standing eight count. You cannot be saved by the bell in any round. In case of an accidental headbutt after Round 4, we go to the scorecards. If you knock your opponent down, you have to go to a neutral corner before I count. If you foul intentionally, I will deduct a point. Questions? No? Thought so. Protect yourself at all times. Obey my command at all times. I want a good, clean fight. Touch gloves.”

Lilly is all smiles, oozing confidence as they touch gloves.

Lilly: “I’ll beat you hard with my gloves but I hope we’ll be friends after that.”

Alesia says nothing, only staring at her. It’s a poker face because she’s thinking: “Wow, I’m really about to fight Lilly.”

Kanti: “Ok ladies! Back to your corners!” 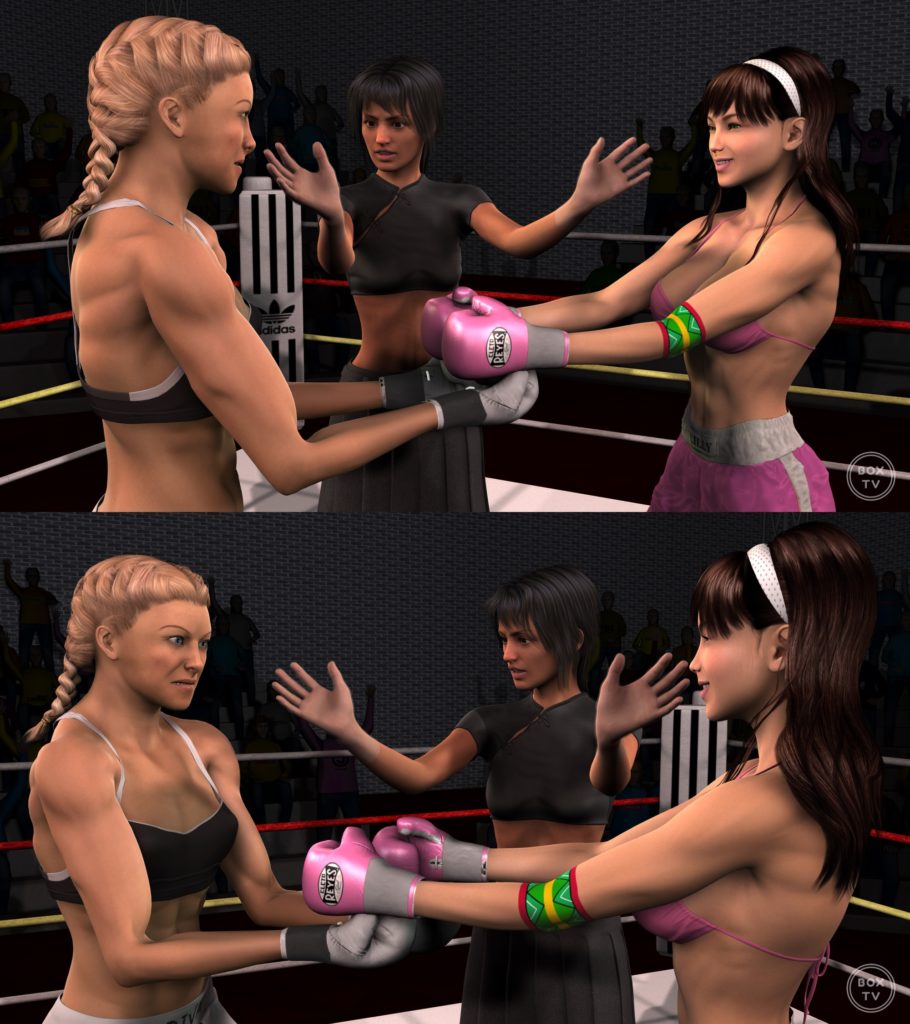 Esther: “Let’s have a quick look at each corner right before the bell, starting with Schumann’s.”

Alesia: “Give her the middle of the ring, move and adapt to whatever she does before the counterattack. Never stand still.”

Alesia: “Take the body whenever possible, but get the hell out after landing. In and out.”

Regina pulls the mouthpiece out, waters it and gives it to Alesia.

Esther: “On to the pink corner… I mean the blue corner.”

Marlene: “She lost her last fight by knockout. Start strongly and put her under pressure to shake her up. It’s a psychological game.”

Marlene: “Alesia is still a dangerous puncher who deserves your respect. Remember that.” 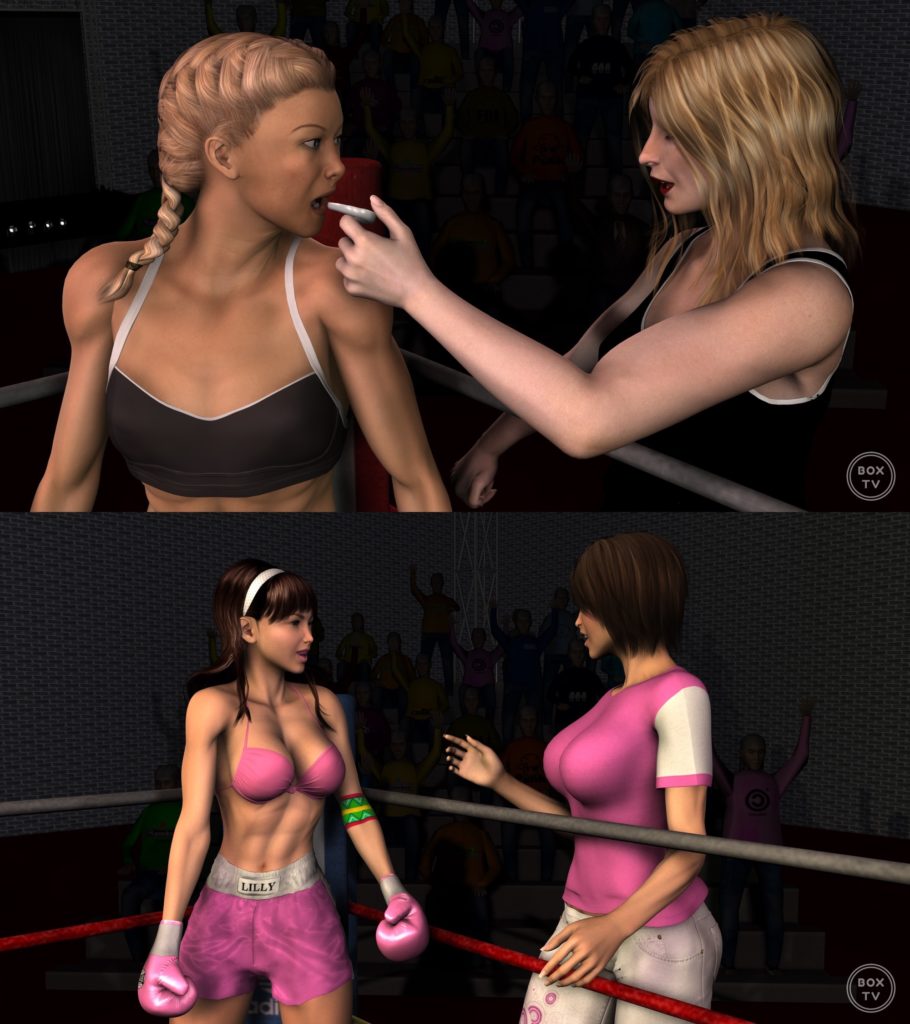 Hard training for Alesia ahead of the Lilly fight 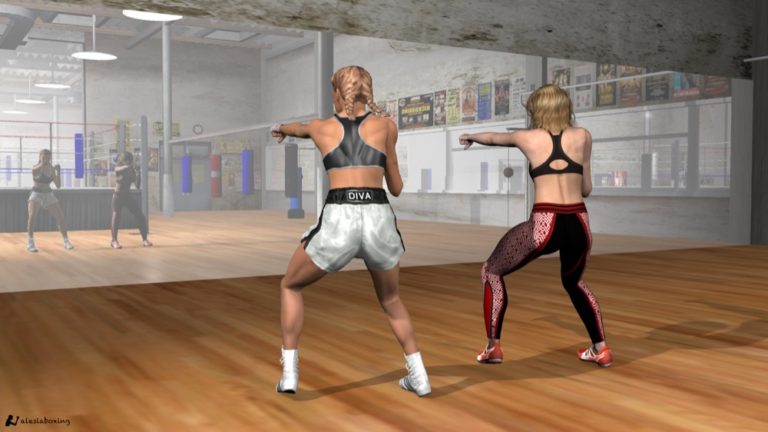 Alesia Schumann vs. Lilly Sanchez – Round 1 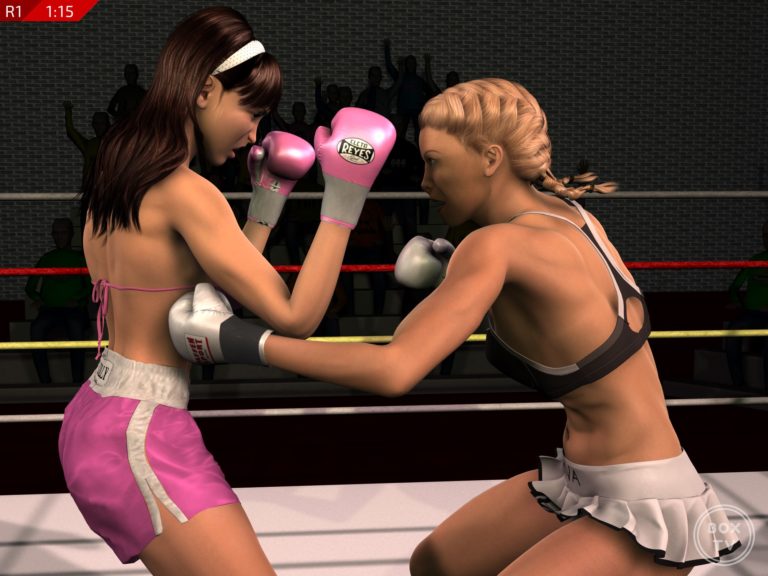