Alesia and Lilly get to the middle of the ring. They circle around each other, looking the opponent in the eye. Tension is rising in the arena.

Lilly: “Prepare to be dropped again.”

Alesia: “Do you have health insurance in Germany?”

Both think about attacking at the same time. Lilly is about to fire a left jab, but as she starts moving her arm and feet, the Bavarian has already pulled the trigger. Her right cross collides with her jaw!

Esther: “Schumann strikes first with thunderous right hand. She may have dropped points in the second round, but the first move in Round 3 suggests she won’t be a dropout.” 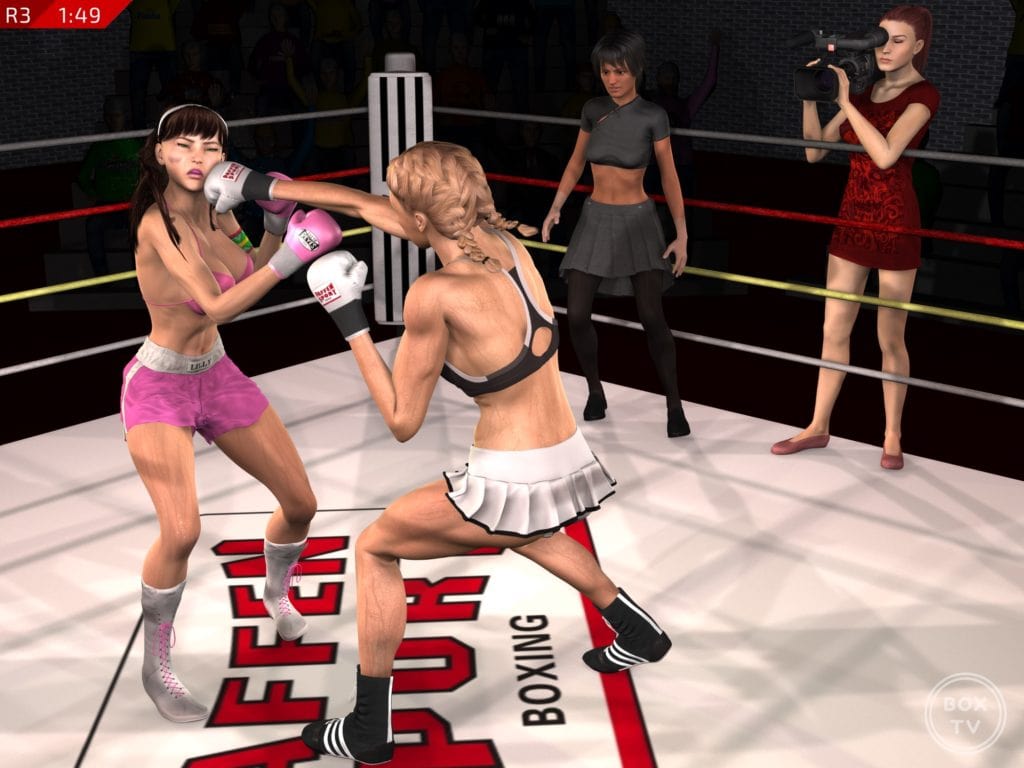 Marlene: “Come on, Lilly! You’re the best fighter here! Pound her into a quarter-pounder!”

Miss Sanchez listens to her mom and stays in the middle of the ring because she wants to hand out the leather. They trade a few shots that hit gloves or miss. Then Lilly lets Alesia make the first move, which comes in the form of a left hook.

Lilly does just enough to avoid it and fire an overhand right hook on target. It catches the upper part of the German’s cheek.

Esther: “Are we in for a round of back and forth? The two young ladies seem determined to cut each other’s head off. Is there a thing such as mutually assured decapitation?” 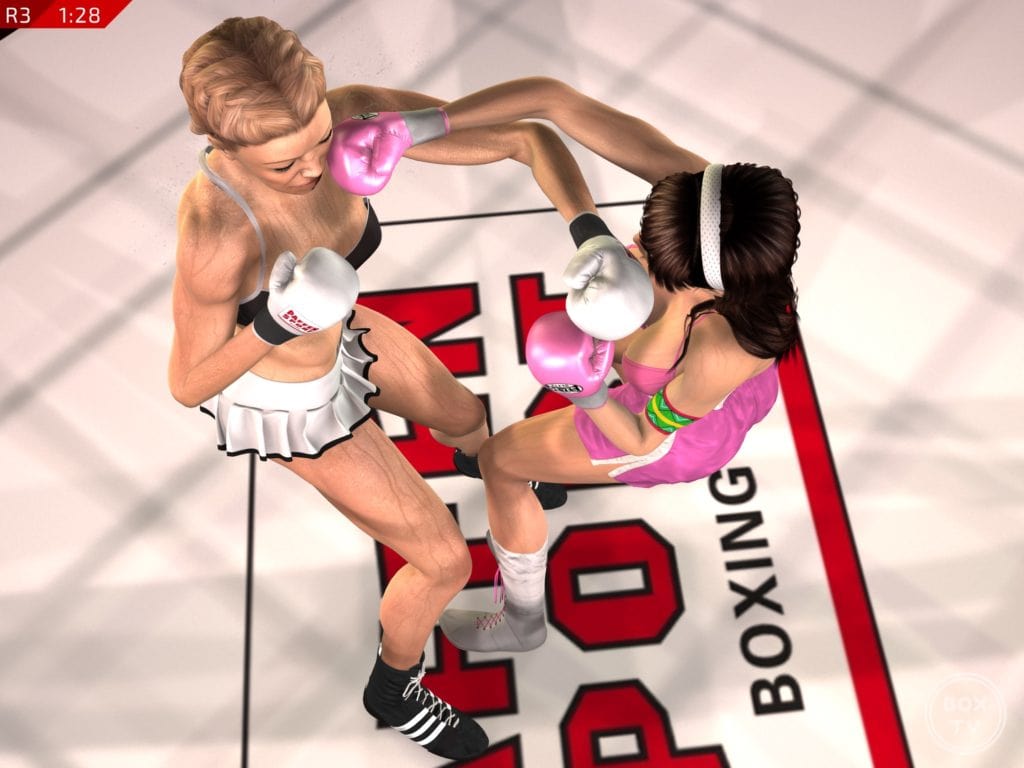 The crowd chants to give an extra boost to the local fighter, hoping that she will win Round 3. The German welcomes the support as she is back on track after a very tough second round. She dances around Lilly, who keeps attacking her to find a hole in her defense.

Our fighters get close to the ropes near the red corner and Lilly throws a right hand from the orthodox stance.

Ally turns her upper body to the right while her feet are going to the left, putting leverage behind a left hook over Lilly’s arm. The white glove catches the right eye! Closeups will show the details from other angles.

Esther: “A punch in the eye is not something that knocks you down, but it usually blurs your vision and it can do damage in the form of swelling or cuts. It’s kind of annoying, really.” 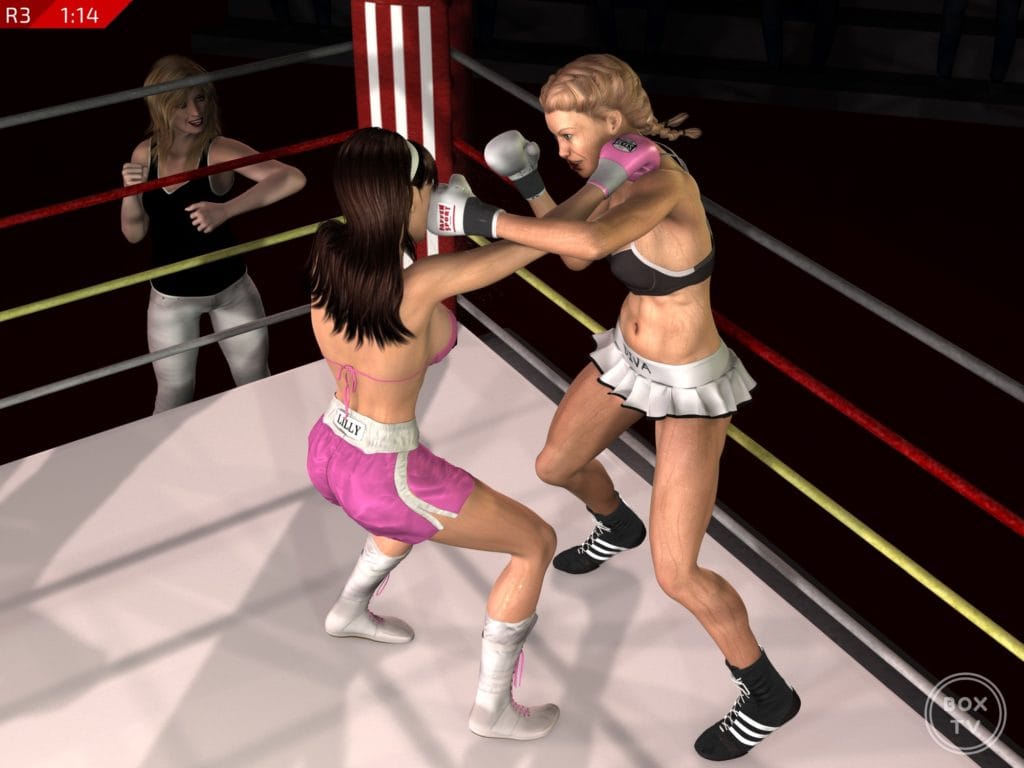 Lilly keeps going forward to attack Alesia, who works on the periphery of the ring. Both are playing to their strengths.

The Aztec Princess is the next to score, though. Ally is getting dangerously close to a neutral corner while backing up, and Lilly seizes the opportunity. She gets set and smacks the German with a quick jab just below the left eye, right as she’s trying to throw a jab of her own.

Lilly thinks: “Surely I can corner her now. She’s been evading me for too long.”

Esther: “Sanchez isn’t just good looking. She’s looking like she can get Schumann in a corner and drive forward and land a few solid punches. Does the German have it in her to resist?” 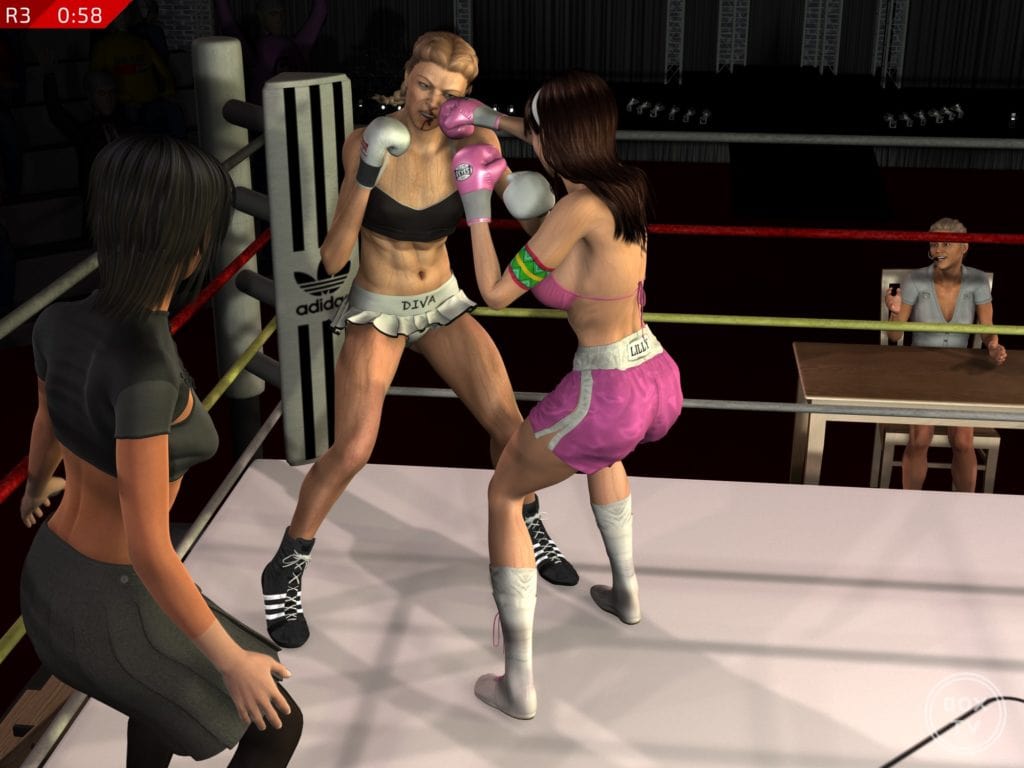 Alesia knows where she is, and she thinks: “Not so fast!”

Lilly just landed a jab. She tries to cut off the ring while getting ready to throw a big left hand, but the Bavarian stands her ground once again. She pivots on her toes and lets her right hand go to make contact just under Lilly’s left eye.

The crowd cheers the payback.

Esther: “The law of talion is in force in this ring, with Schumann retaliating immediately after taking a punch under the eye. My best guess is that she wants to balance things out by adding colour to the left side, after making the right side red.” 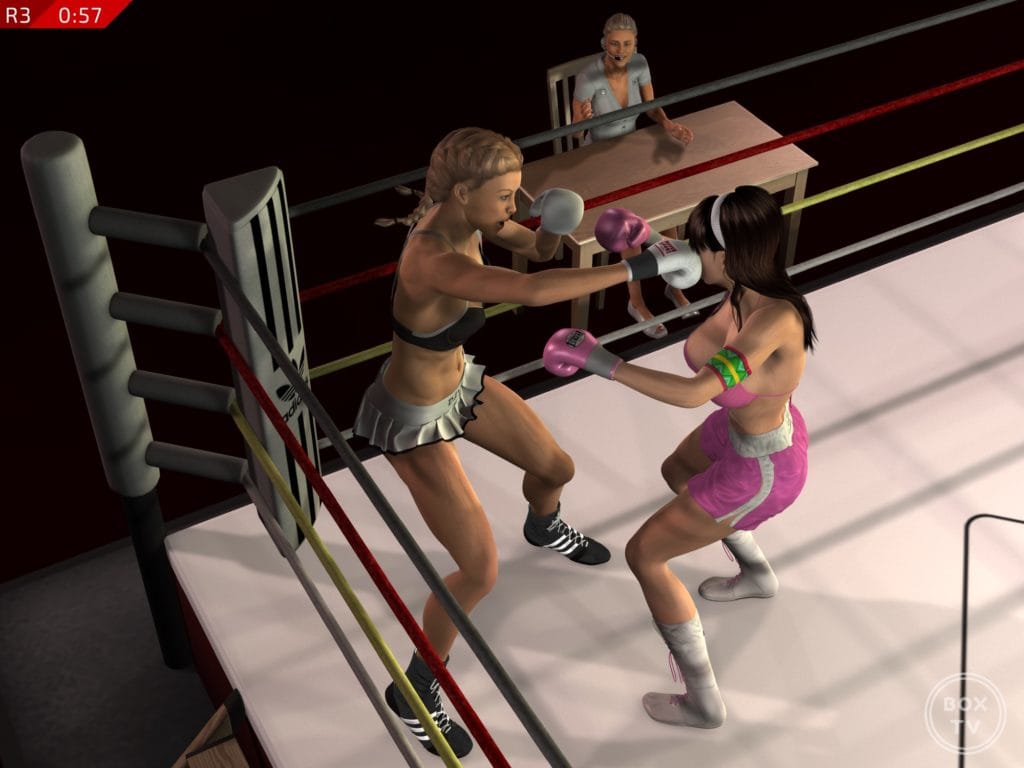 Action continues in a very tight Round 3. Both ladies traded shots and they’re “at it”.

The fight goes back to the middle of the ring with Alesia tightening up her defense to deal with Lilly’s assaults, but defending against her is not always easy.

The Mexican puts her right leg inside and finds an angle to throw a looping left hook that surprises Alesia. It finds its way between her gloves to catch her under the right eye.

Esther: “I believe it’s fair to say that these fighters see eye to eye… They keep targeting a piece of flesh that is vulnerable to cuts and swelling, certainly in order to make more damage and wear the opponent down.” 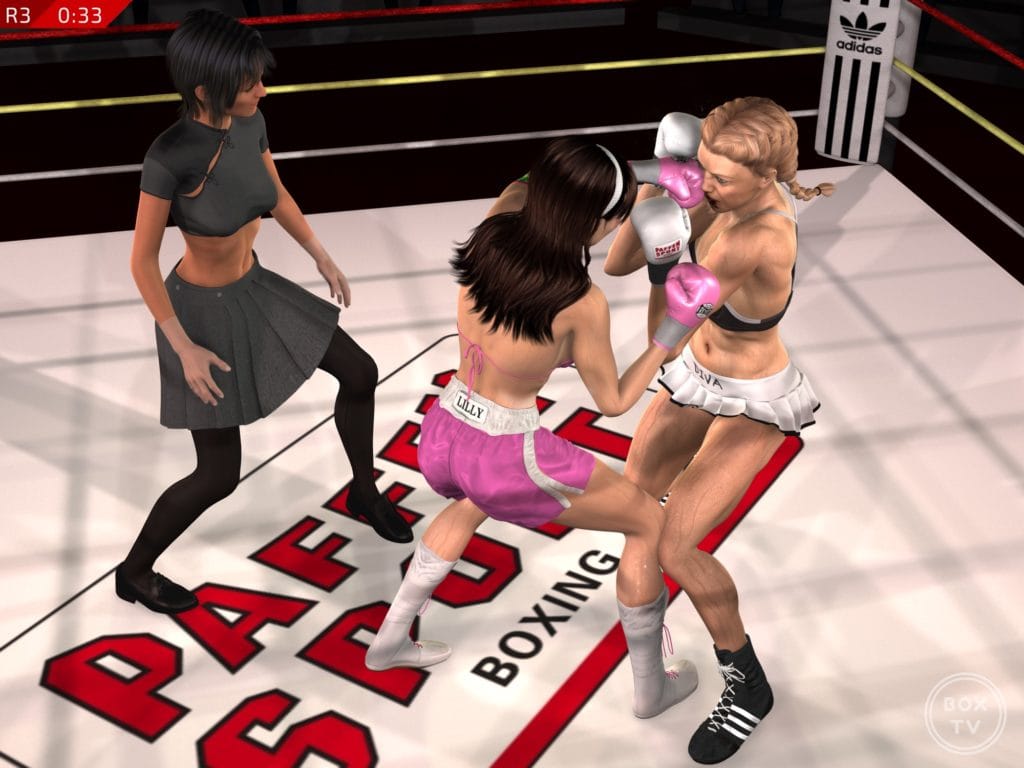 Marlene: “Go to the body again! Slow her down!”

Lilly works the jab to keep Alesia busy and try to set things up. The German bobs, weaves and blocks while trying to find a way to counter effectively.

The Mexican finally thinks she has the right momentum to dig to the body with a left cross, but just as she puts her left foot on the ground and goes forward, Ally steps back, transfers her weight and pops her in the jaw with a right cross.

The crowd claps to salute a fine move.

Esther: “As great a fighter as Sanchez is, she hasn’t found a way to take control in a contested Round 3. Schumann’s fundamentals are a fundamental obstacle that won’t get out of the way.” 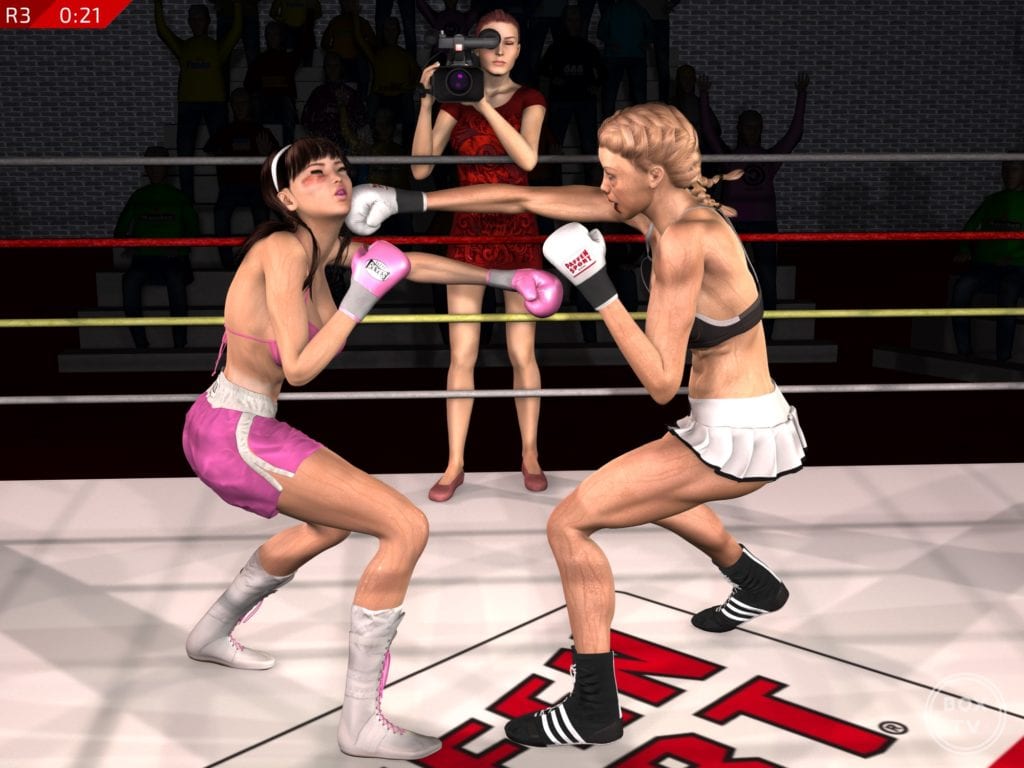 Lilly thinks: “Dammit. She’s as hardheaded as f***! I gotta mix things up a bit.”

The Aztec Princess starts moving around, making unpredictable motions with her upper body to confuse Alesia. She doesn’t throw a punch for a few seconds in the hope of creating a counterattacking opportunity.

When the Diva finally makes a move, she goes for a left hook from outside. Lilly has a plan, though. She moves inside and throws a right hook from an awkward low angle. It connects with her chin and jaw, leaving Ally unable to finish what she started.

Esther: “Surprise is your worst enemy in boxing. Surprise on the chin is even worse. Nobody likes it, really.” 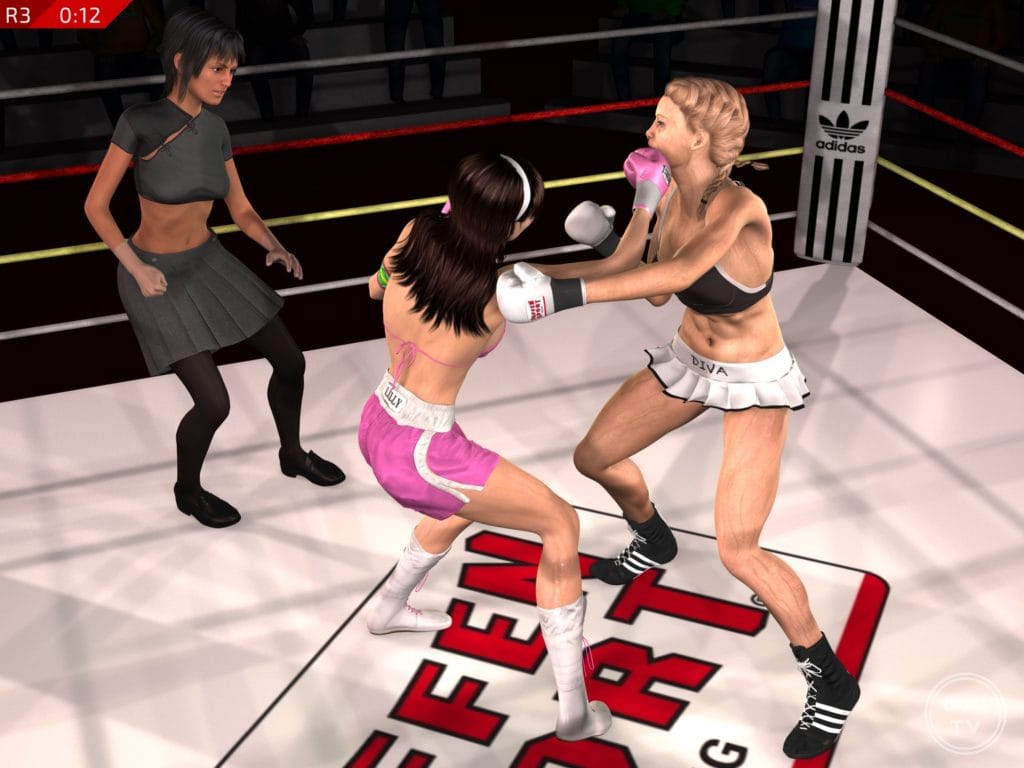 Kanti: “STOP! Go back to your corners.”

We start with Alesia’s.

Regina: “Do you really think you have a chance to win after what you just did?”

Alesia: “Funny! Did you pick up a clowning license, too? I’m calling the circus.”

Regina: “Ok. I want you to bring more intensity in Round 4. Keep working from the outside and keep your distance. Throw your punches with full arm extension for them to connect with power. Follow your instinct: when you dodge a good head shot, or feel that you rocked her already, move inside for a vicious body shot. That’s where she can be hurt.”

The coach treats the damaged eye with more vaseline and gives her the mouthpiece back.

Esther: “These two have chemistry, don’t they? Anyhow, Halmich gave her the right tip. Sanchez is more vulnerable to the body than the head. It’s the best place to hit to knock her down. Let’s see if Schumann can act on it once more.” 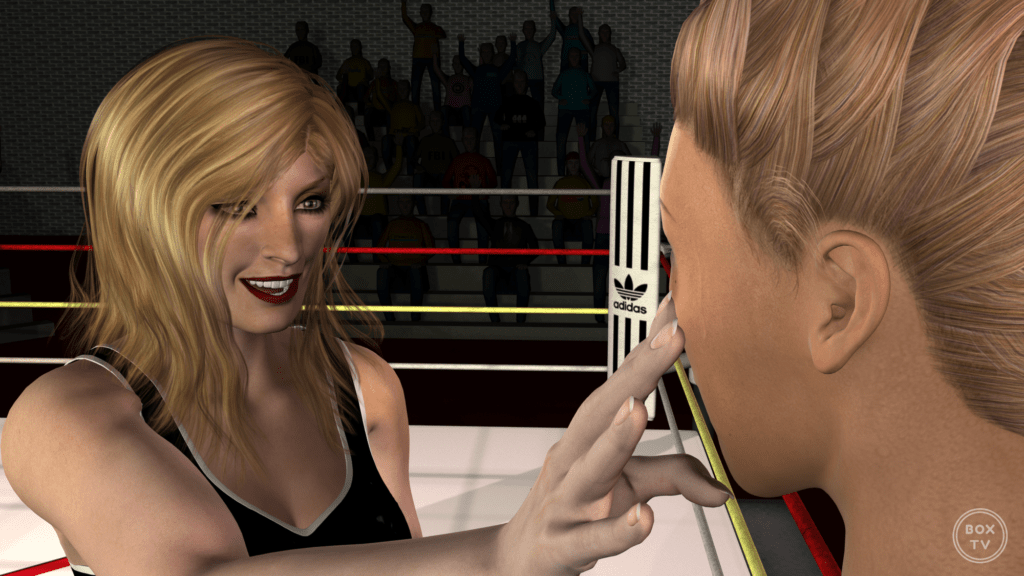 In the blue corner, Lilly comes back in a bad mood and she looks at Alesia while Marlene is helping her.

Marlene: “That round was close. The judges could give it to anyone, but since she’s the local, we have to assume she won it.”

Lilly: “She’s annoying. She came back and gave me that shiner.”

Marlene: “She’s not ranked 10th without a reason. You have to work harder to win this! She has problems fighting from a close range. If you get her in the ropes, you can hurt her with your crosses, just as you did in the second round. Then she’s all yours.”

Lilly: “She’ll be my little bitch! I’ll give her a collar with ‘Diva’ written on it!”

The coach works on her eye, gives her water and the mouthpiece back before Round 4.

Esther: “There are bad intentions in the Sanchez camp. Let’s see if she can ‘domesticate’ Schumann as easily as she thinks.” 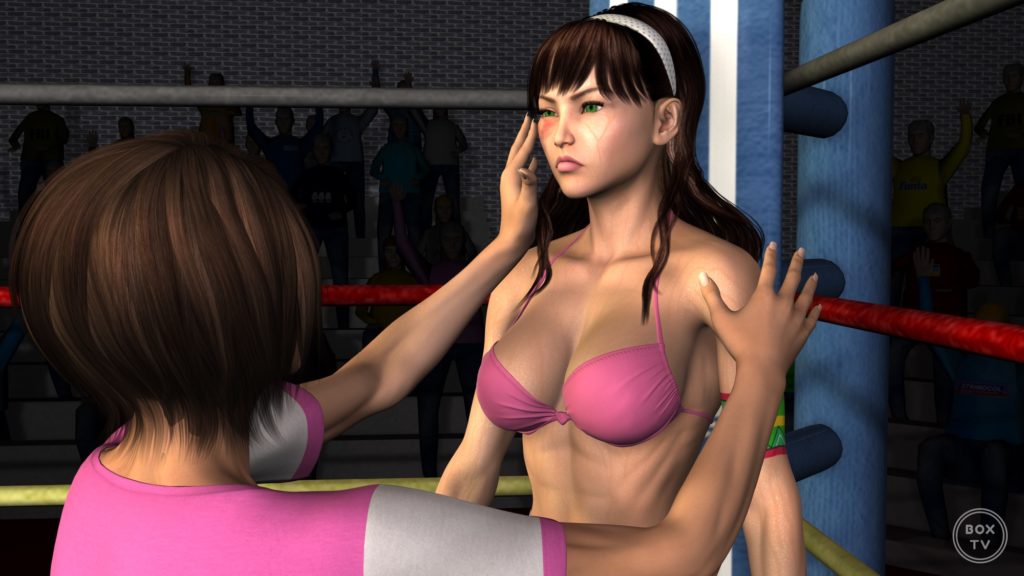 Before Round 4 begins, let’s hear Esther Schouten’s analysis with a scorecard update.

Esther: “Time flies when you’re having fun! Round 3 was very exciting, with Sanchez and Schumann taking turns to score, but I don’t see a winner. Therefore, I make it a 10-10 while keeping in mind that judges may be tempted to give it to Schumann, because she’s the local fighter and because the crowd cheered a lot more for her punches. Anything helps make an impression when it’s close.”

“Going into Round 4, I expect Sanchez to apply further pressure on Schumann, who looks more than ready to battle. Whether the Mexican can land her murderous left cross or the German can hurt her to the body could be the decisive factor. Stay tuned!” 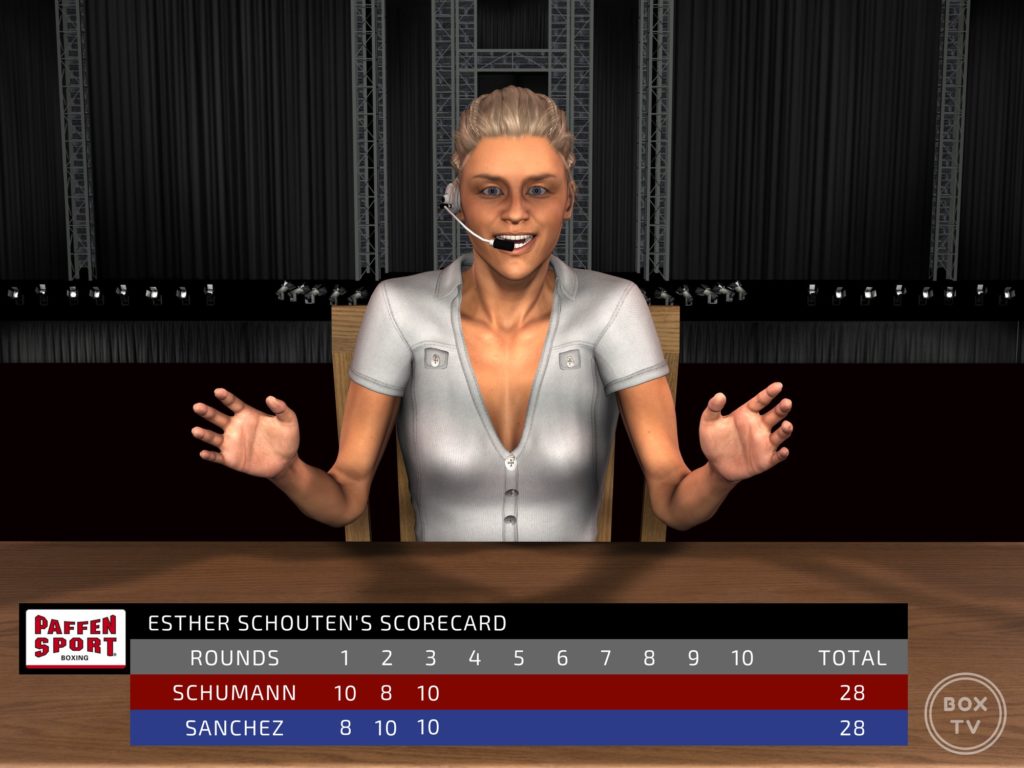 Alesia Schumann vs. Lilly Sanchez – Round 2 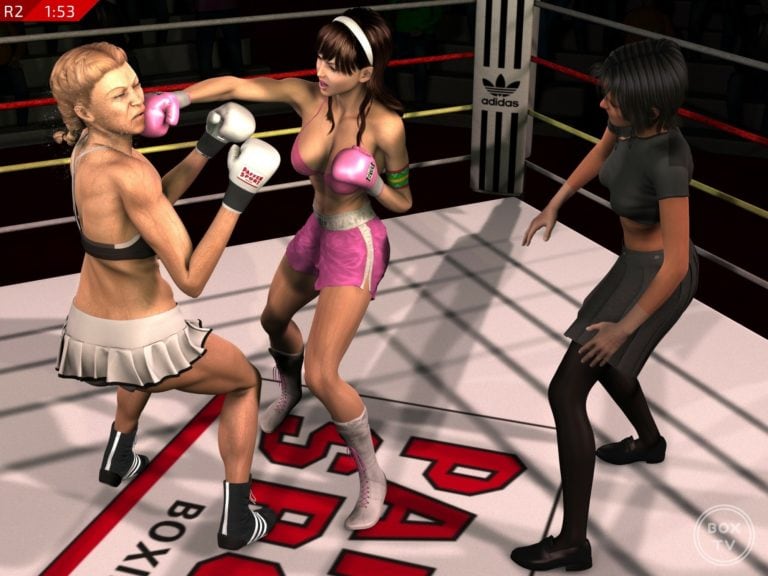 Alesia Schumann vs. Lilly Sanchez – Round 4 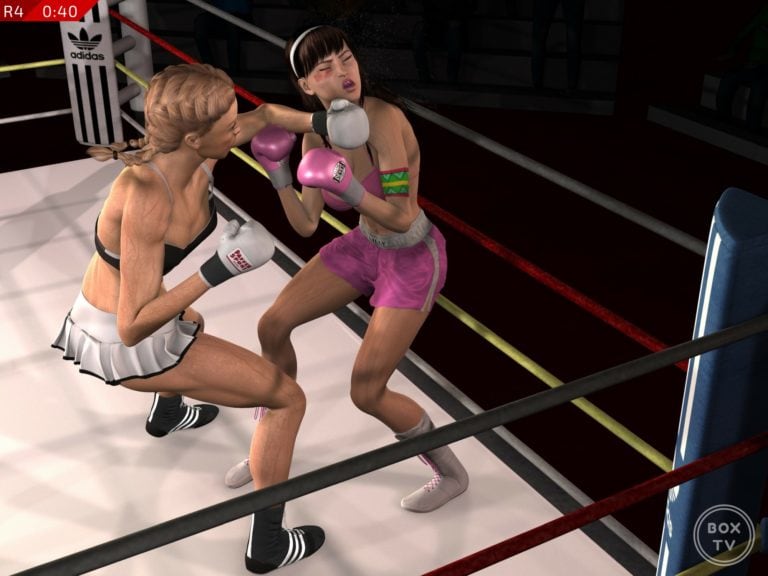