Round 4 starts. Alesia and Lilly square off once again, in what is turning out to be a cracker of a fight. They are cautious, throwing jabs to feel each other out.

Alesia knows what she wants to do. She sends out those jabs with speed and strength to make Lilly concerned… and too busy to throw something serious at her. She uses her left hand to paw continuously and keep her at a distance. She puts a bit more power into the last one, forcing the Aztec Princess to bring her hands up and block the jab. As you can see, Regina is egging her on.

Esther: “A good jab is annoying. It makes you hold back because you know that the right hand is coming next and you can’t do what you want when it keeps coming at you. Sanchez has to be annoyed by now. Very annoyed.” 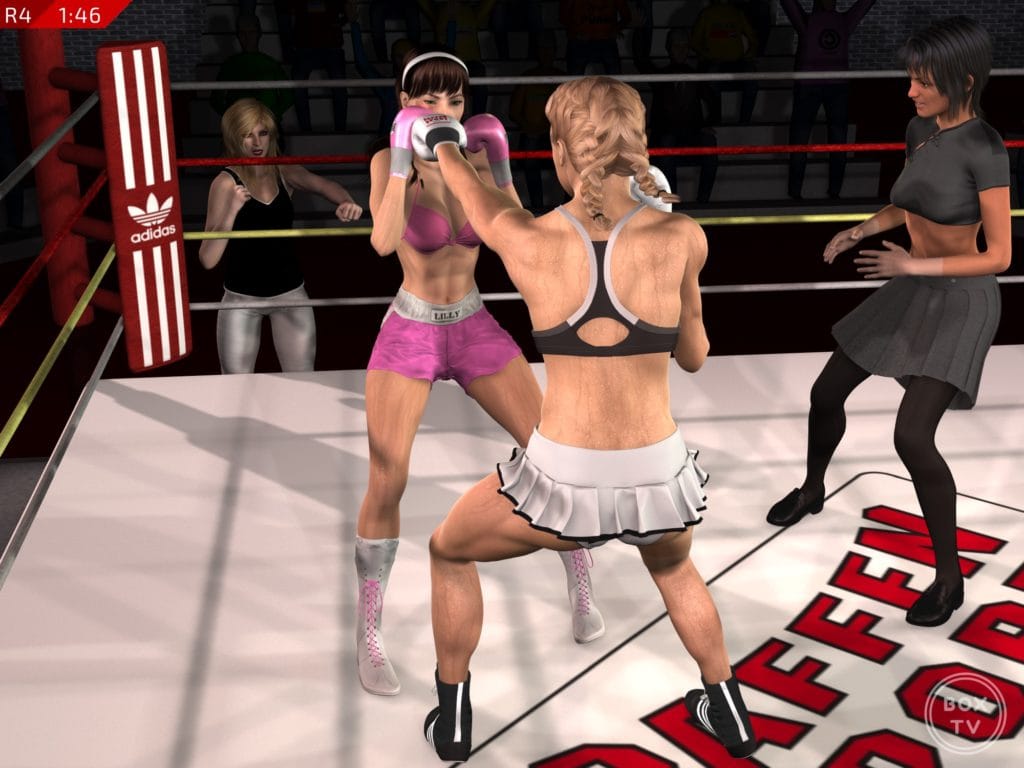 Following up on her jabs, Alesia puts Lilly under pressure, something she hasn’t done that often in this fight.

The Bavarian boxer keeps going after the Mexican, hitting nothing but gloves until she makes a more decisive move. She fakes the right uppercut, making the the Aztec Princess close the gap in the middle in the hope she can block it.

As soon as she sees the pink gloves moving inside, Ally goes outside to her left and throws a left hook behind Lilly’s guard, landing on the cheekbone.

Regina is usually calm, but she can’t hold back at the moment. “Yes! Yes!”

Esther: “This isn’t what you want to see if you are a Sanchez fan. Schumann is using fear of her most dangerous weapon, the uppercut, to create openings and target the damaged eye. A one-two punch combination without even throwing the first punch.” 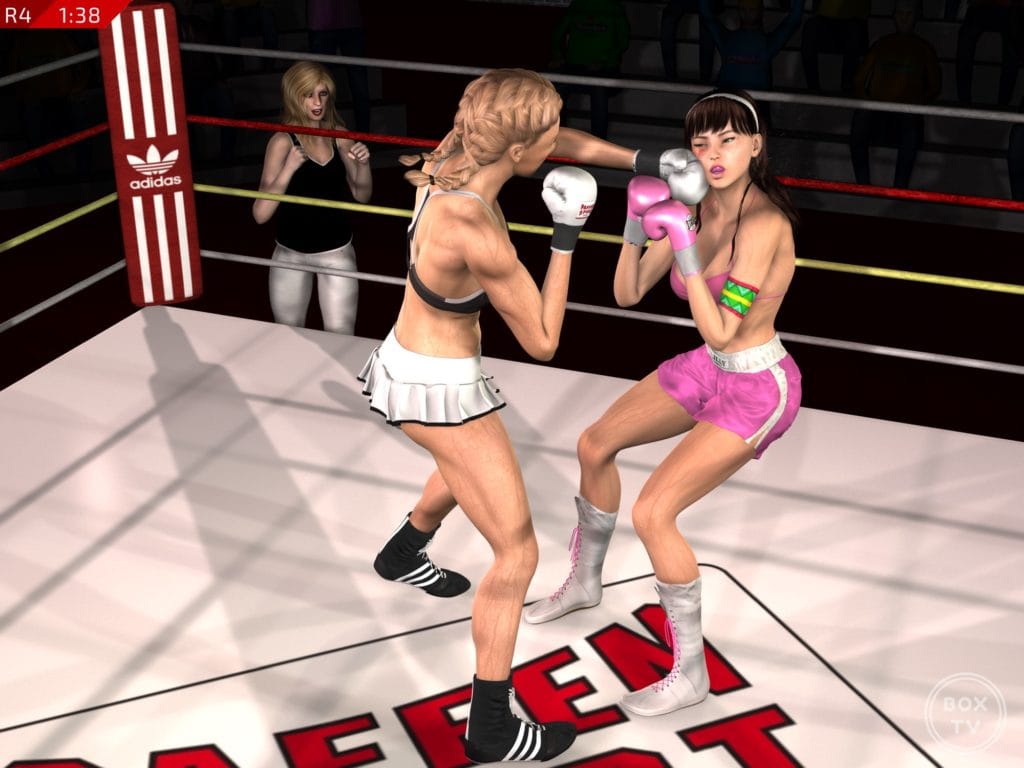 Alesia feels that she has the advantage early in Round 4 and she presses the Attack button while Lilly falls back after taking a left hook.

From the middle of the ring, Alesia keeps Lilly busy, with her hands up to protect, by throwing fast straight punches.

That left hook has scored many times before, so the German goes back to the well one more time. As soon as she sees an opening, she twists her upper body to throw the hook but the Mexican anticipates it well. She starts slipping to her left to avoid getting smacked once more.

Esther: “This is a nice dodge by Sanchez. It’s the first time in the fight that you see her make such a move, though. Is she… concerned?” 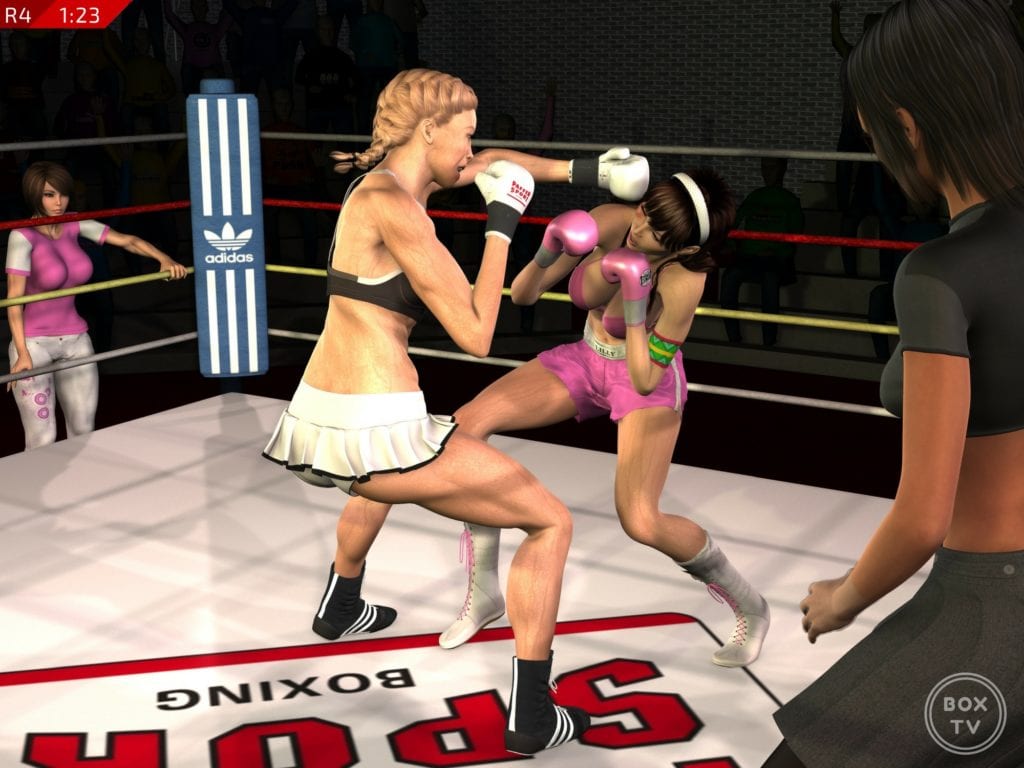 Lilly may have prevented a left hook from making further eye damage but Alesia forced her out of her position.

Right after missing with her left, the Diva follows up. She lowers her stance and launches a cannonball of a right cross before the Aztec Princess can get back into a normal fighting stance. Straight on the chin!

Lilly winces in pain and the crowd cheers.

Esther: “This ref is in the way… anyways, Schumann just showed us the importance of combinations in boxing. If your first shot doesn’t hit the target, it can make the second bull’s eye! This punch on the chin gives her control in this round. It looks as though a gap has appeared between the two fighters. Will Schumann keep digging?” 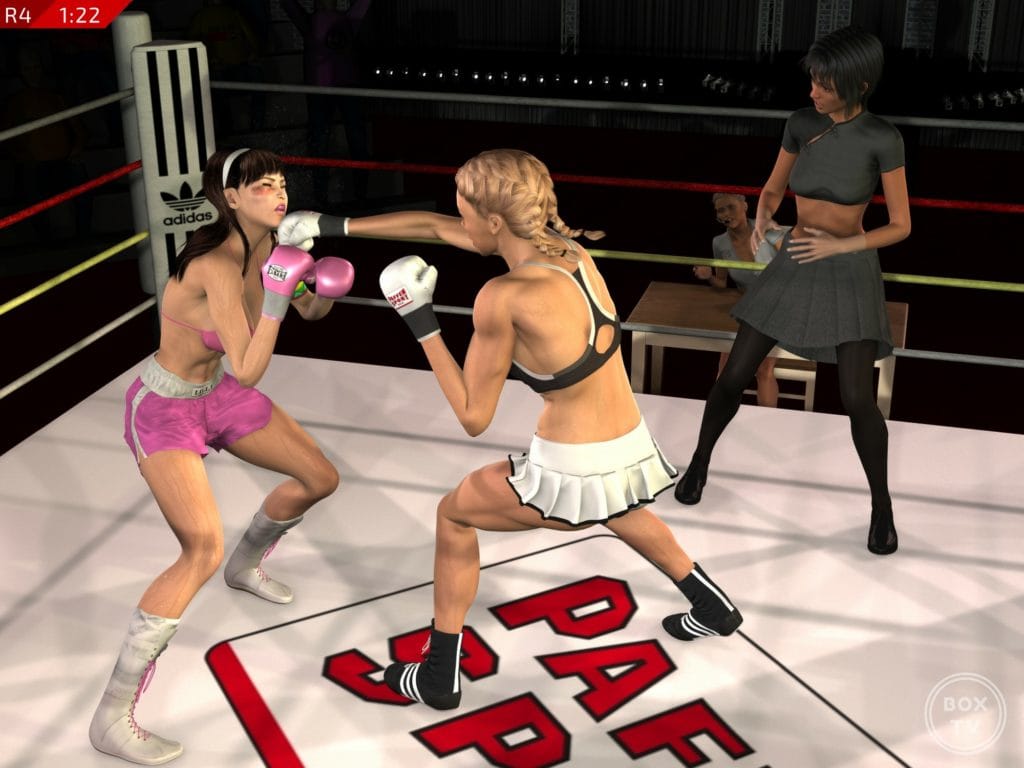 A sentiment of urgency invades Lilly’s mind. The German has already violated her space too many times and she wants to repel her… now.

Just as Alesia is working the jab, the pretty fighter in pink has an idea that could backfire if she misses, but she tries it anyway. She goes for a high right hook over the arm, and it lands in the upper part of Alesia’s face.

Marlene: “That’s it! You can counterattack, too!”

Esther: “Sanchez has been under pressure during this round, but she is showing her versatility by switching to the counterattacking mode. The result is scoring against a very determined Schumann.” 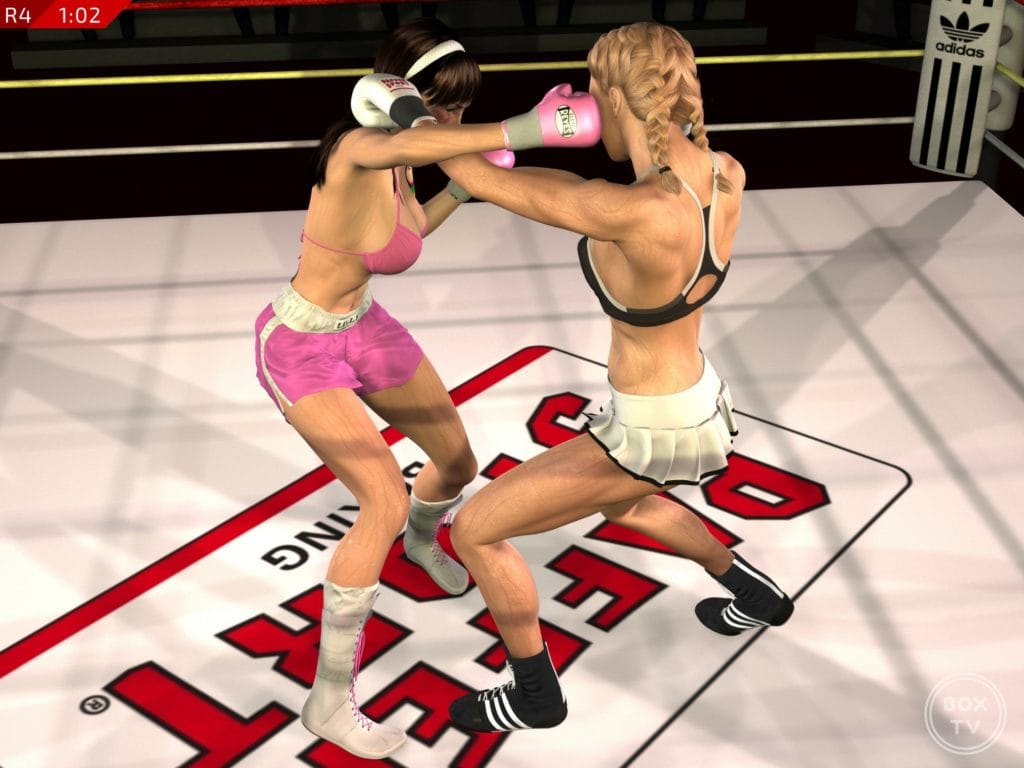 Alesia took a right hook, but she’s on a tear after that. She moves around and pressures Lilly, who barely escapes her punches while fighting backwards.

The crowd is becoming noisier, asking Ally to get a result now.

Esther: “Schumann has grown a lot in just two months with Regina Halmich as a coach. Her ring generalship has improved, with fitness to boot.”

Ally brings Lilly in the ropes near the blue corner and pumps her right hand halfway. The Mexican starts moving down to her right to duck it, but the Diva pulls back her right and throws a short left hook. Head and glove are going towards each other, and PISH! on the chin.

Esther: “Olé! Sanchez is hurt! She got fooled by a fake right hand and ate a genuine left hook that many Mexicans wouldn’t hesitate to claim as their own. She needs to get out of that corner now or face the worst!” 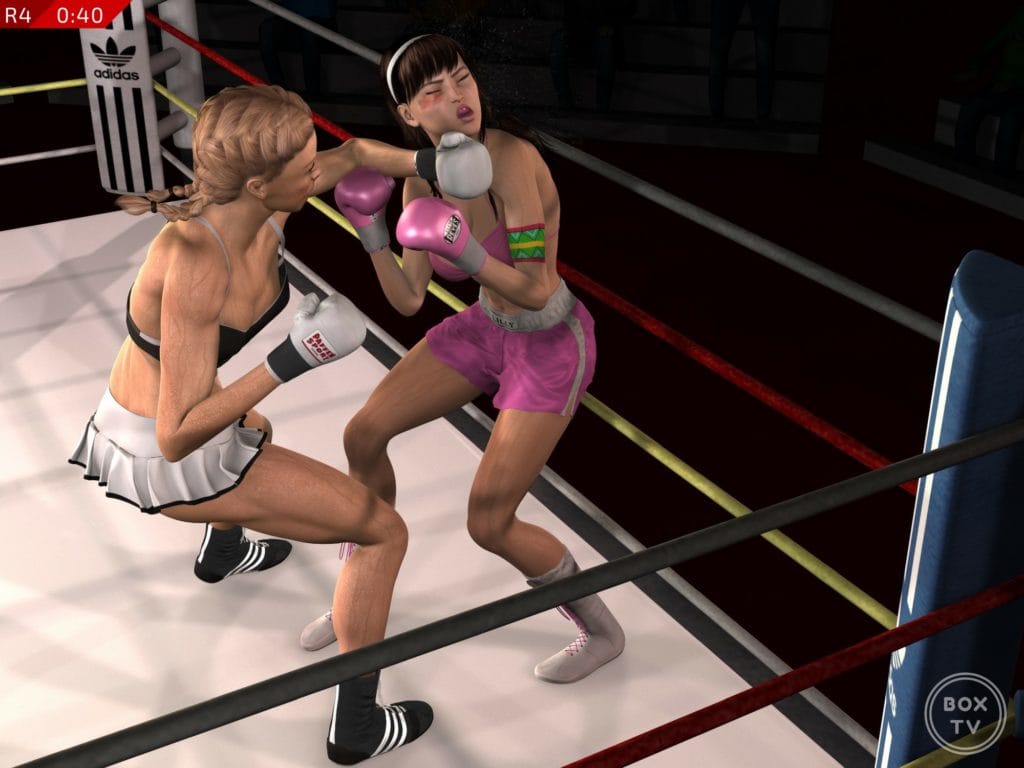 Alesia just hit Lilly with a hurtful left hook and her coach comes out of her usual silence.

Esther: “What do Halmich and her protégéehave in store for us? It looks like they made special plans.” 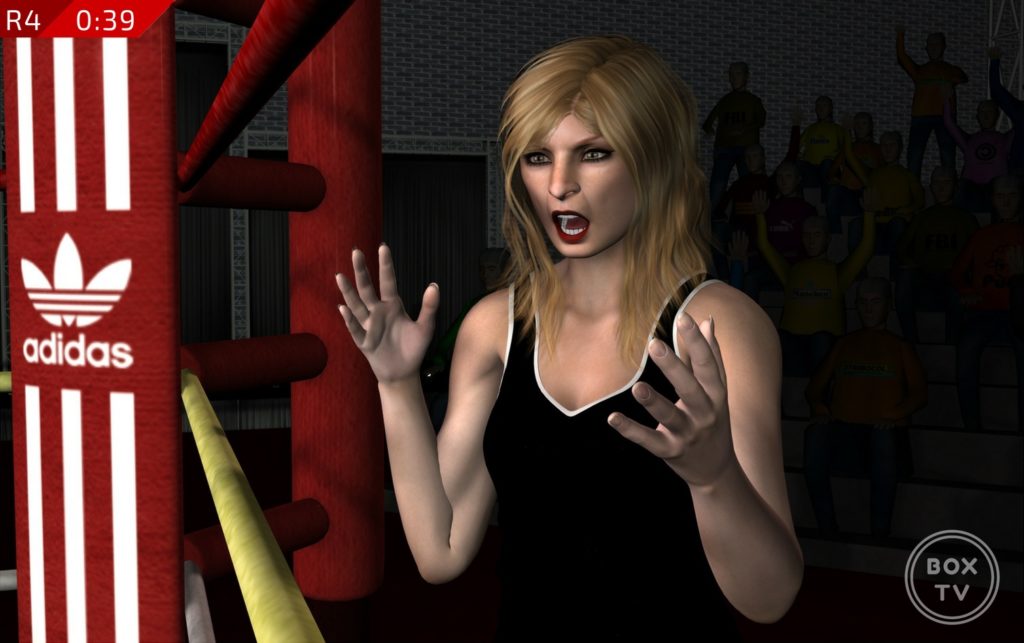 Alesia responds to her coach’s orders in Round 4. She goes for the kill!

After landing a big left hook on Lilly, the German has a defenseless Mexican in front of her.

Alesia resets her feet, bends her knees, lowers her body, winds up with her right hand low and her uppercut rises up to plow the solar plexus. Ally just landed her signature punch where the visitor is vulnerable.

The crowd roars in approval.

Esther: “Is anyone else having stomach ache here? I think I felt this uppercut myself. A vicious punch by Schumann, who probably can’t spell ‘nice’ at the moment.” 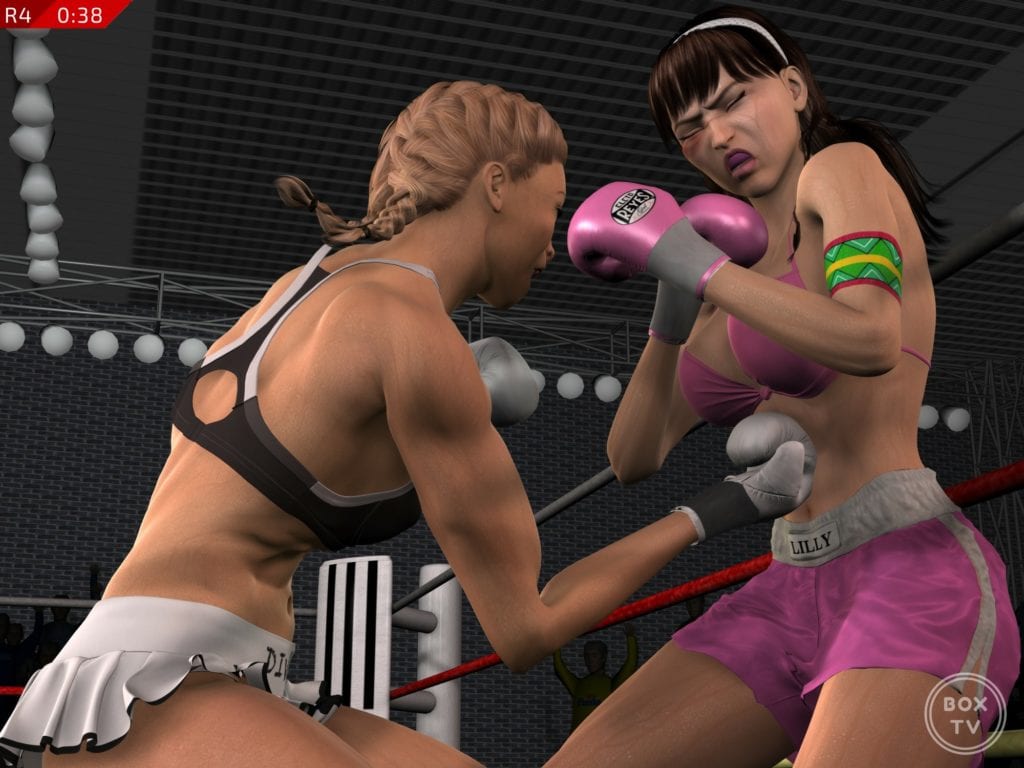 Alesia’s right uppercut to the solar plexus cuts Lilly’s air supplies. Her legs turn into jello and she falls forward on the canvas.

The crowd in Berlin jumps to its feet. Alesia takes a quick look at Lilly, who is gasping on the ground.

Ref Kanti rushes to the scene, looks at Ally and points to a neutral corner.

Esther: “Sanchez went down for the second time in the fight! Schumann showed that the first-round knockdown was no fluke and she’s firmly ahead, if she hasn’t already won it. It will be hard for Sanchez to get up from this. Perhaps Cornish pixies could give her a lift.” 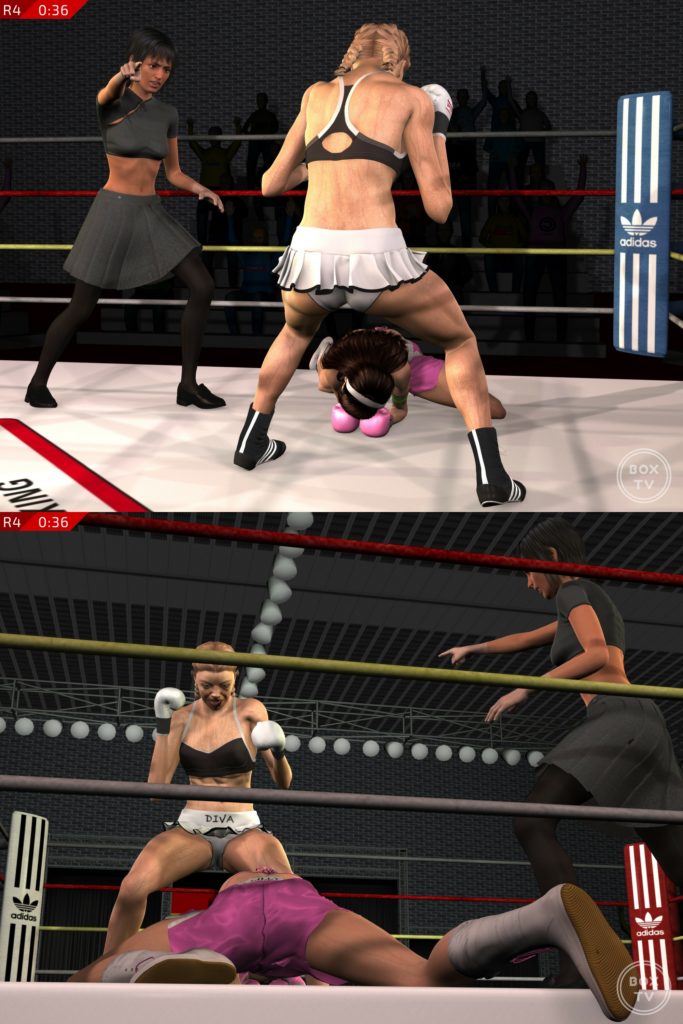 Lilly is still struggling to breathe and overcome the pain. Her mom and coach Marlene is urging her to move.

Marlene: “Get up. Please get up. You’re strong enough to do it!”

Esther: “Sanchez may have the will to get up, but does she have the oxygen intake and leg strength now?”

Kanti thinks: “Do I give her a count or do I declare her out? It doesn’t look like she can make it at all.” 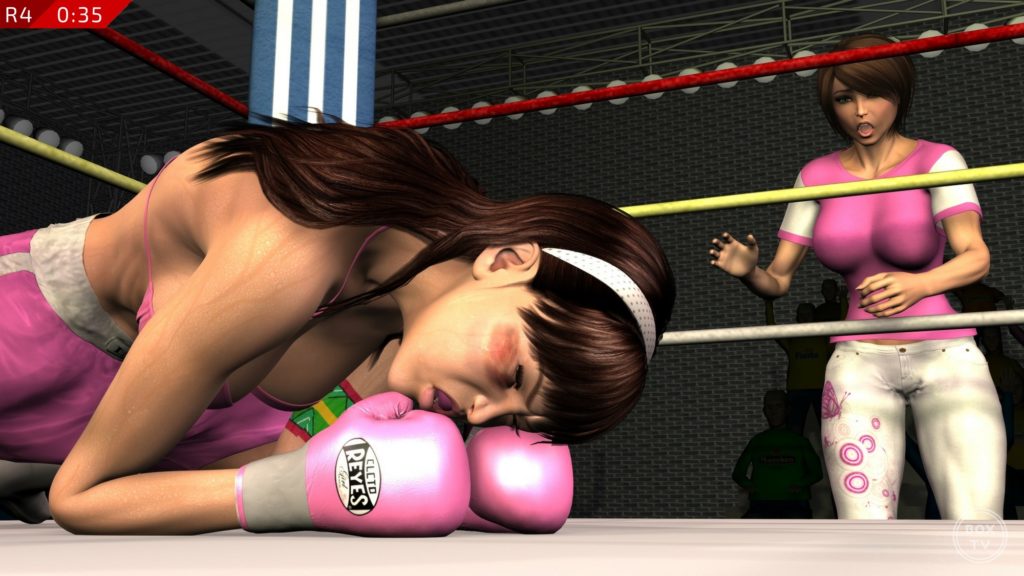 Kanti thinks: “Ok, I’ll give her a count and see how it goes.”

No reaction yet from the Mexican. All we hear is a whimper as she can finally take a bit of air in.

Esther: “It doesn’t look good for Sanchez. She’s finally breathing, but she has 8 seconds to rise to her feet and convince a smart referee that she can still fight. We’re not even talking about throwing a punch yet!”

Lilly starts pushing up with her arms, breathing a bit and looking at Kanti to see three fingers. She wants to get up.

Esther: “This is still an uphill battle but Sanchez is trying to fight it. It remains hard to be convinced that she can make it.”

Lilly is still trying. She puts her leg under the push-up effort although she’s feeling great pain.

Esther: “She could rise up after all. Will she do that inside 8 or 9 seconds, though, and look strong enough to continue?”

Lilly is on her feet. She’s trying to make sure she won’t lose balance and fall down again. If that happened, she’d be out for sure.

Esther: “This count is a nail biter. Good thing I cut mine regularly because I’d be doing major chewing.”

Lilly’s up. So are her hands!

Kanti: “Are you able to continue?”

Kanti: “Ok, but I’m watching you closely. If you can’t defend yourself, I’m stopping it.”

Esther: “That was the closest of calls. Sanchez improbably rose to her feet despite taking a huge uppercut to the body. Whether she can survive more than 20 seconds now is a big, blinking question mark.” 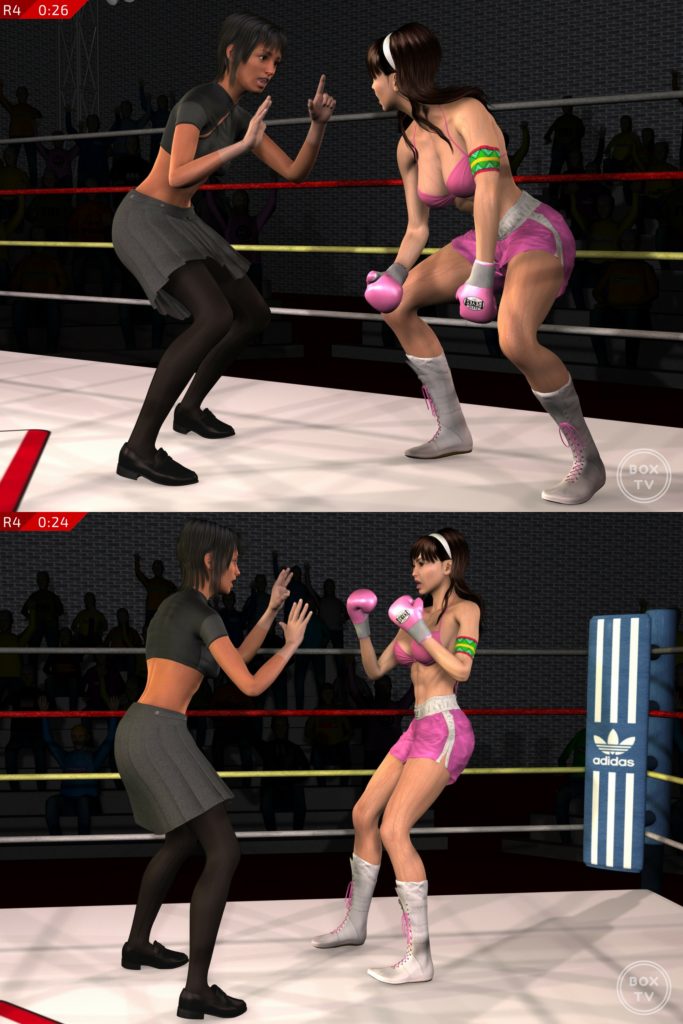 The action restarts with 20 seconds left in the round, and Lilly stays away from Alesia… who manages to catch up with her.

As soon as the Diva throws a punch, Lilly slips it, gets close and clinches. She never intended to try hitting at this point.

Kanti: “I know you love each other and want to show everyone, but break it up! Come on!” 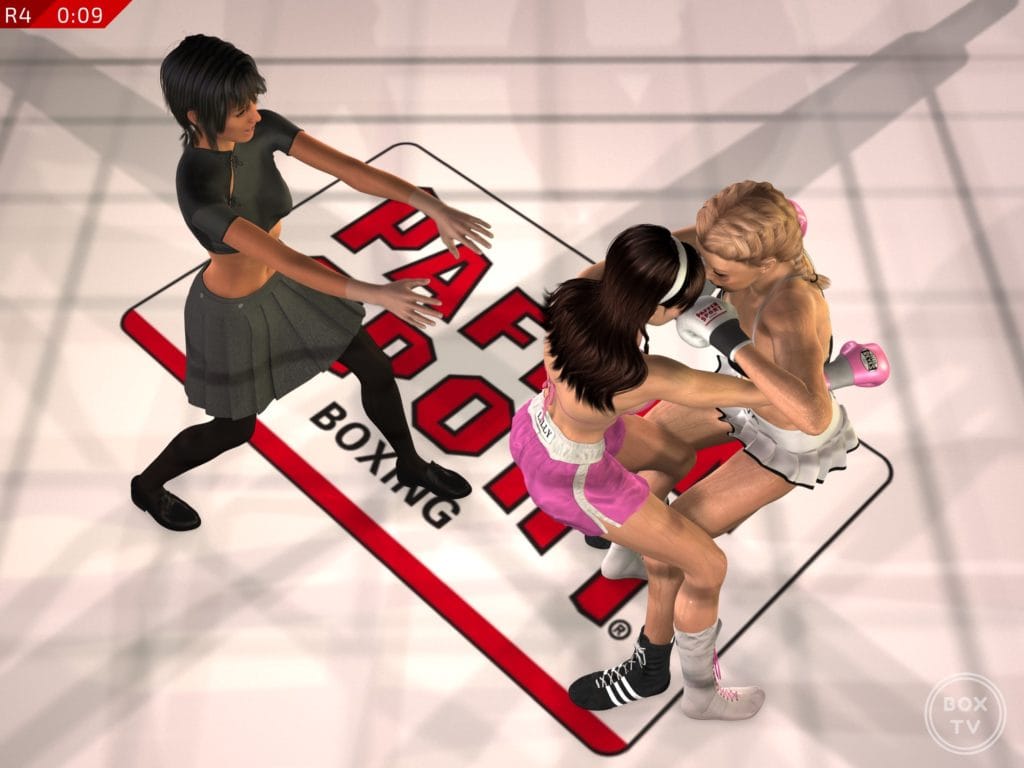 Round 4 ends and we go immediately to the corners. It starts with blue.

Lilly: “Dammit! What does it take to beat her?”

Marlene: “You have to use your speed and try to play the counterattacking game. If she becomes more aggressive, don’t throw everything at full speed. Throw some safe punches, then faster, harder punches. You need an element of surprise to beat her because she has figured out your strengths”

Marlene applies some metal on her right eye, which keeps swelling and progressively shutting down. Near the end of the break, the doc takes a look at the eye. “All good, but only for now. That eye has swollen a lot and it could easily be cut.”

In the red corner, Alesia and Regina are calm after taking the lead in this fight.

Regina: “Good job. Your aggression and calculated risk-taking have paid off. Keep going to the body when you have a chance. That’s how you’ll take her down.”

Regina: “Don’t forget to target the right eye, though. Make it swell until she can’t see a thing.” 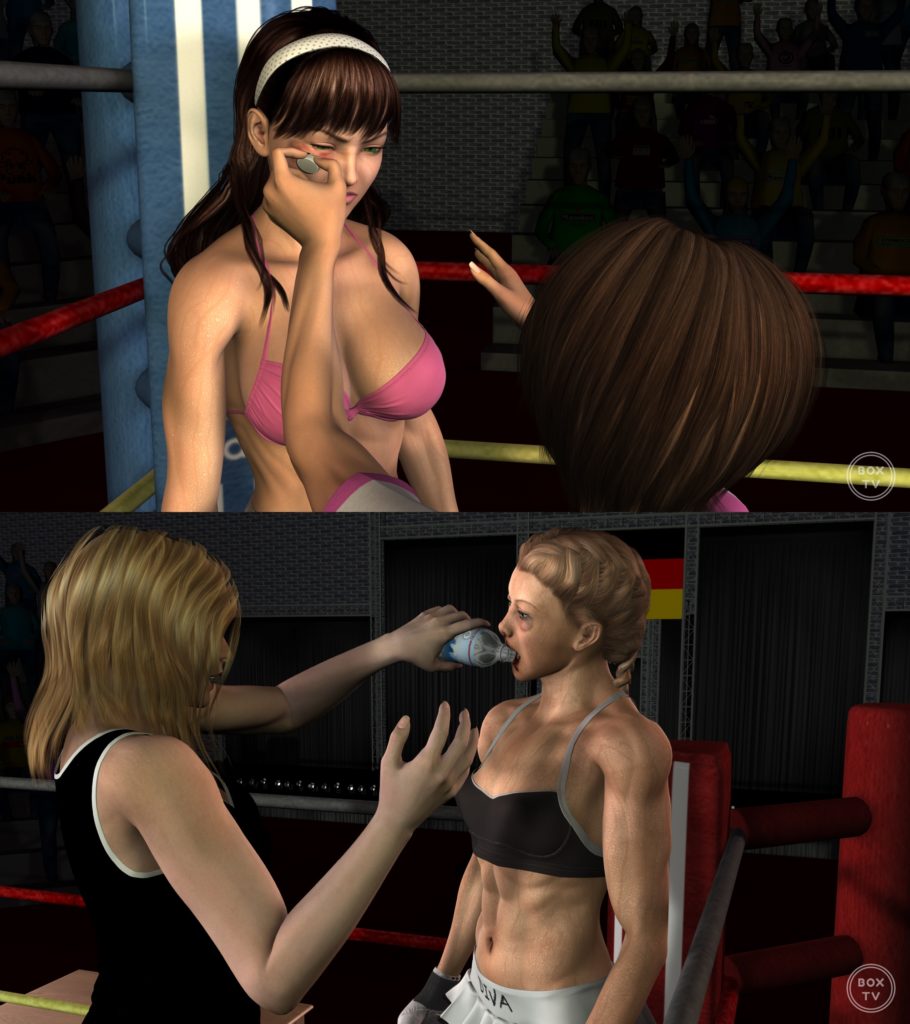 Esther Schouten provides us with a new scorecard update after Round 4, with further analysis on the fight between Alesia and Lilly.

Esther: “It goes without saying that Schumann took the last round 10-8 to gain a two-point advantage thanks to a solid right uppercut to the body. Sanchez has shown, so far, that she can’t handle this.”

“Sanchez will have to protect her body better without cheating too much if she brings her hands down. She needs to score big with power shots to reverse the trend unless she wants to find herself so much behind that she’ll need a knockout to win. She also has to protect the right eye better. She may need a second pair of hands to do it all at once!”

“Either way, Schumann is demonstrating today that she’s not just a pretty face, but a fighter who can handle a scrap with the best. It bodes well for her career.” 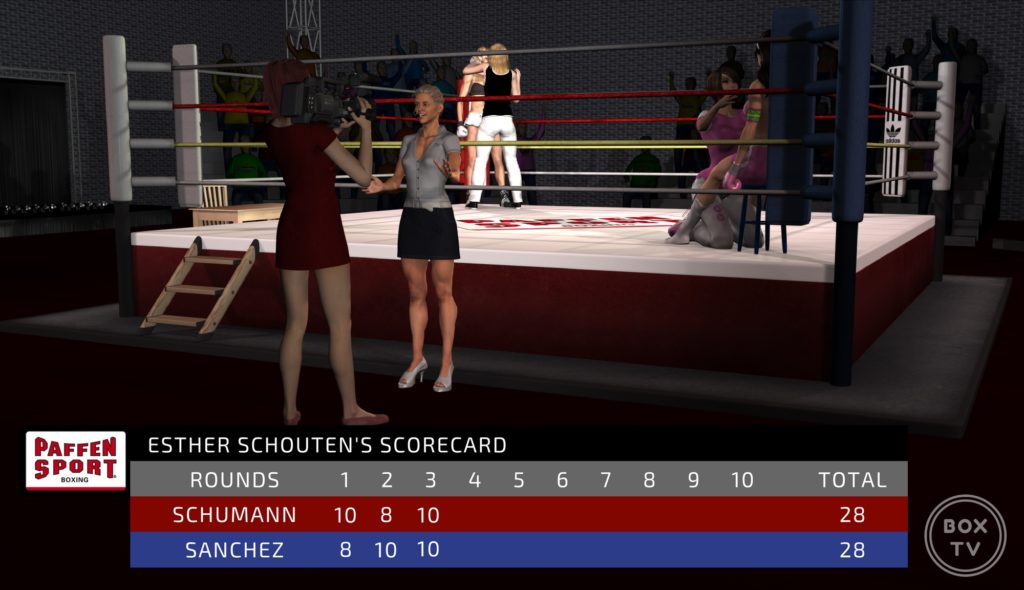 Alesia Schumann vs. Lilly Sanchez – Round 3 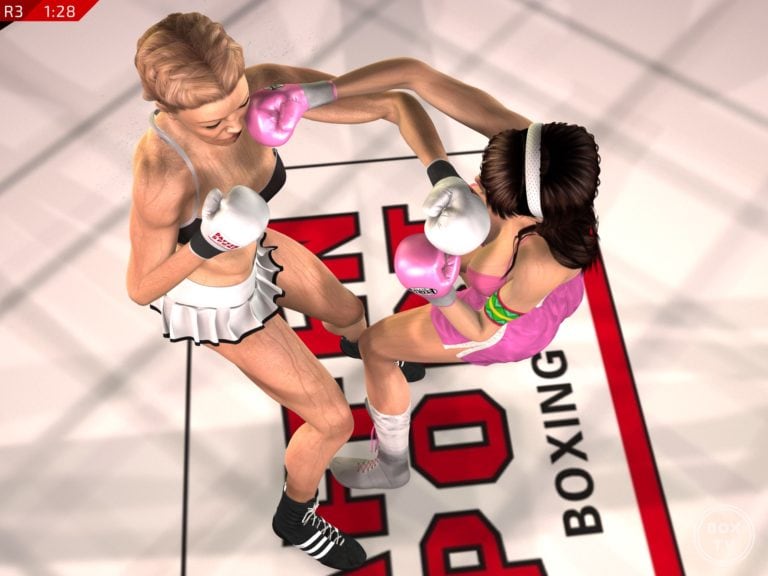 Alesia Schumann vs. Lilly Sanchez – Round 5 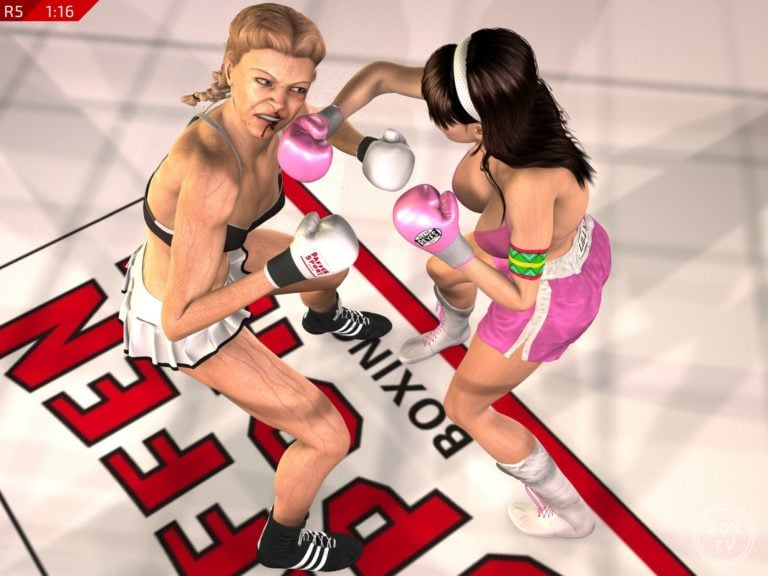