I meet Rachel in the middle of the ring at the start of the second round. I start off with my jab, both because that’s what I like to do, and my left hand is the more free hand at the moment as I want to try to keep my right hand protecting the cut.

Predictably, Rachel’s jab heads for my right eye, but my guard is nicely in place to stop it, while my jab catches Rachel on the cheek. Not a painful punch, but it scores points. 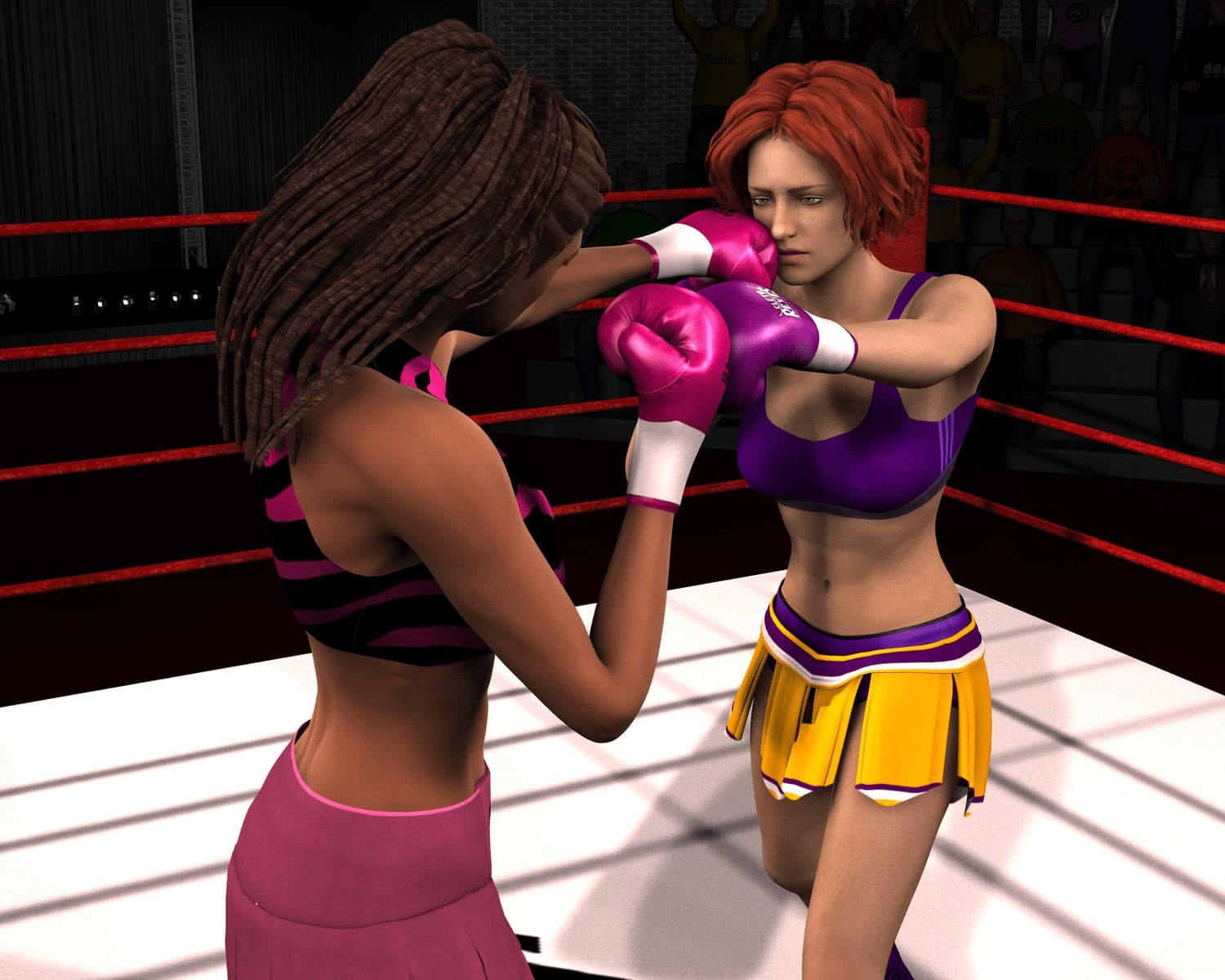 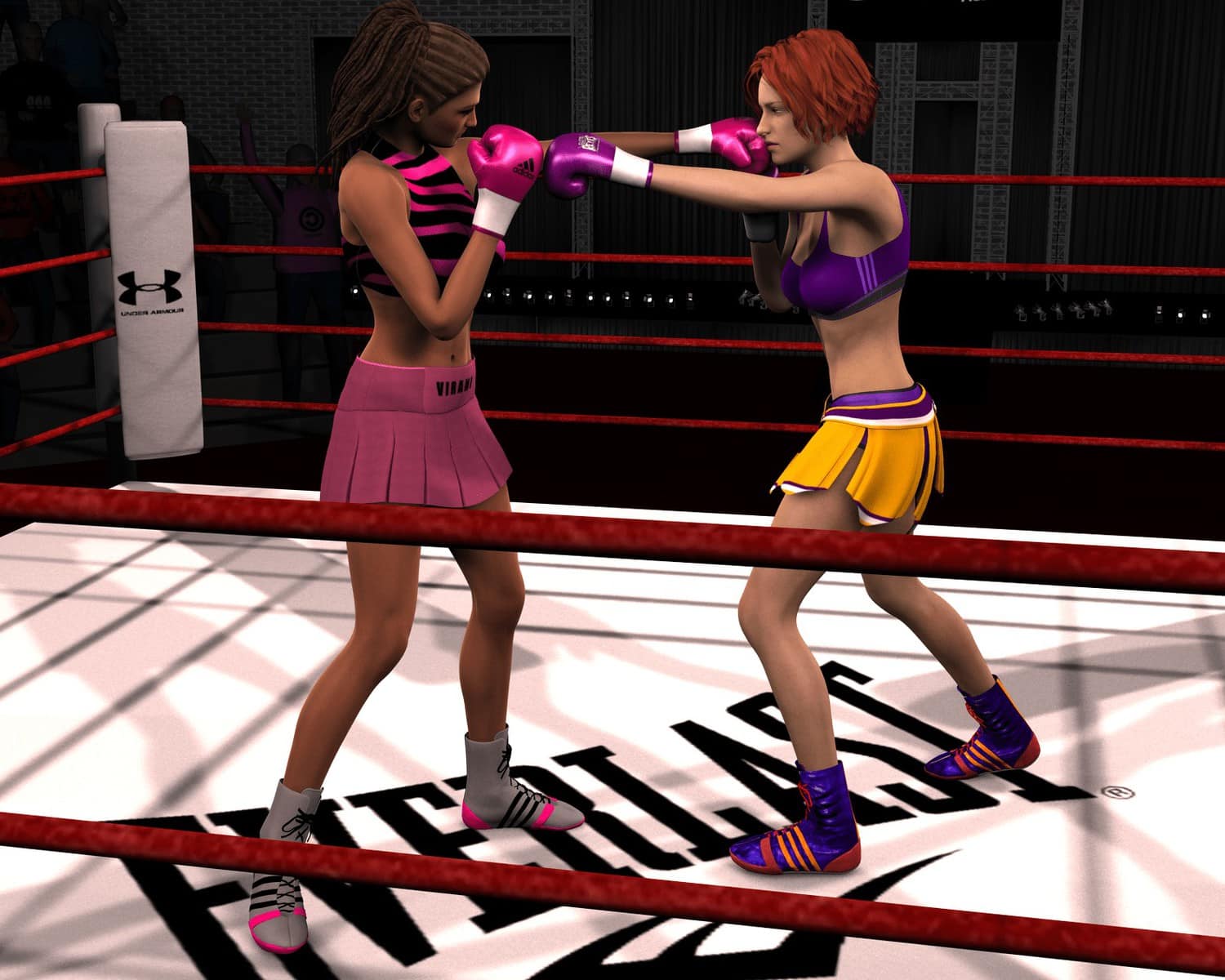 I notice that Kanti is paying a lot of attention to me at the start of this round, clearly she’s somewhat concerned about the cut. Okay. I want to end this quickly. I put the pressure on Rachel, herding her towards the ropes. She notices this and tries to fire back a right hand, which I avoid by swaying and crouching. Now that she is open, this is the time to strike… 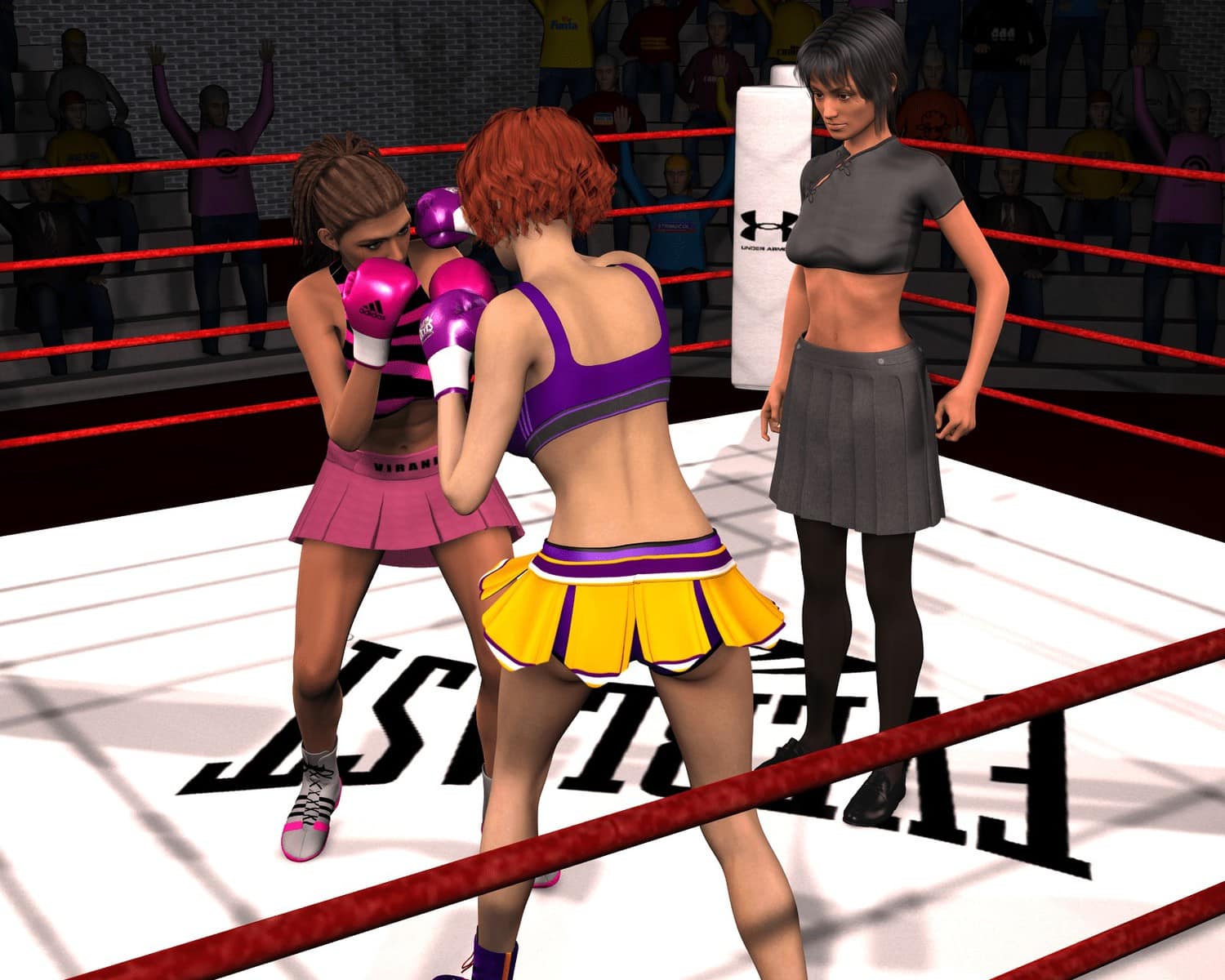 I quickly pivot on my feet and unleash my right hand before Rachel can reset herself. My uppercut lands flush on her chin, the absolute perfect spot for it to land. My punch jerks her head violently upward. The crowd roars. It’s the best shot of the fight. 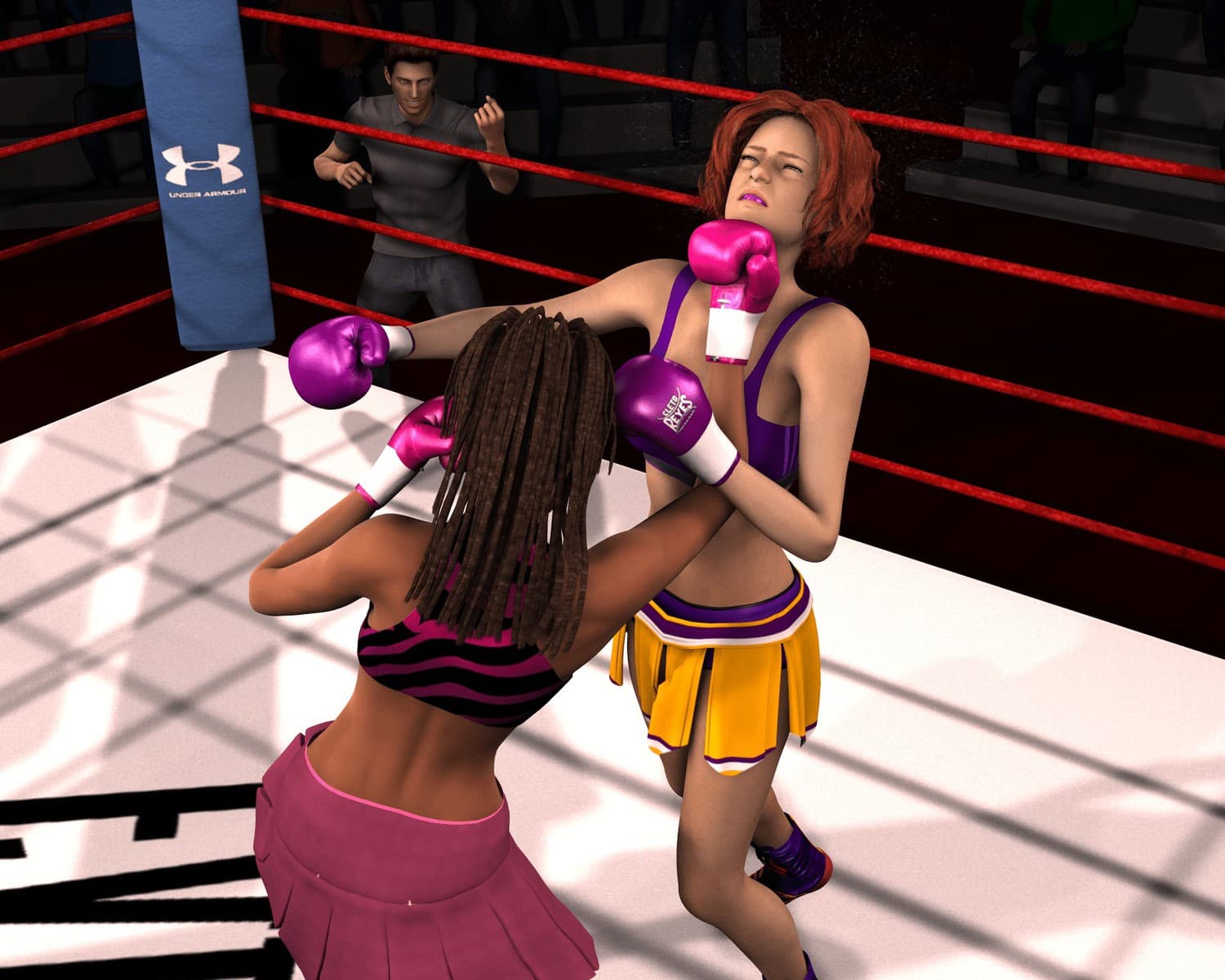 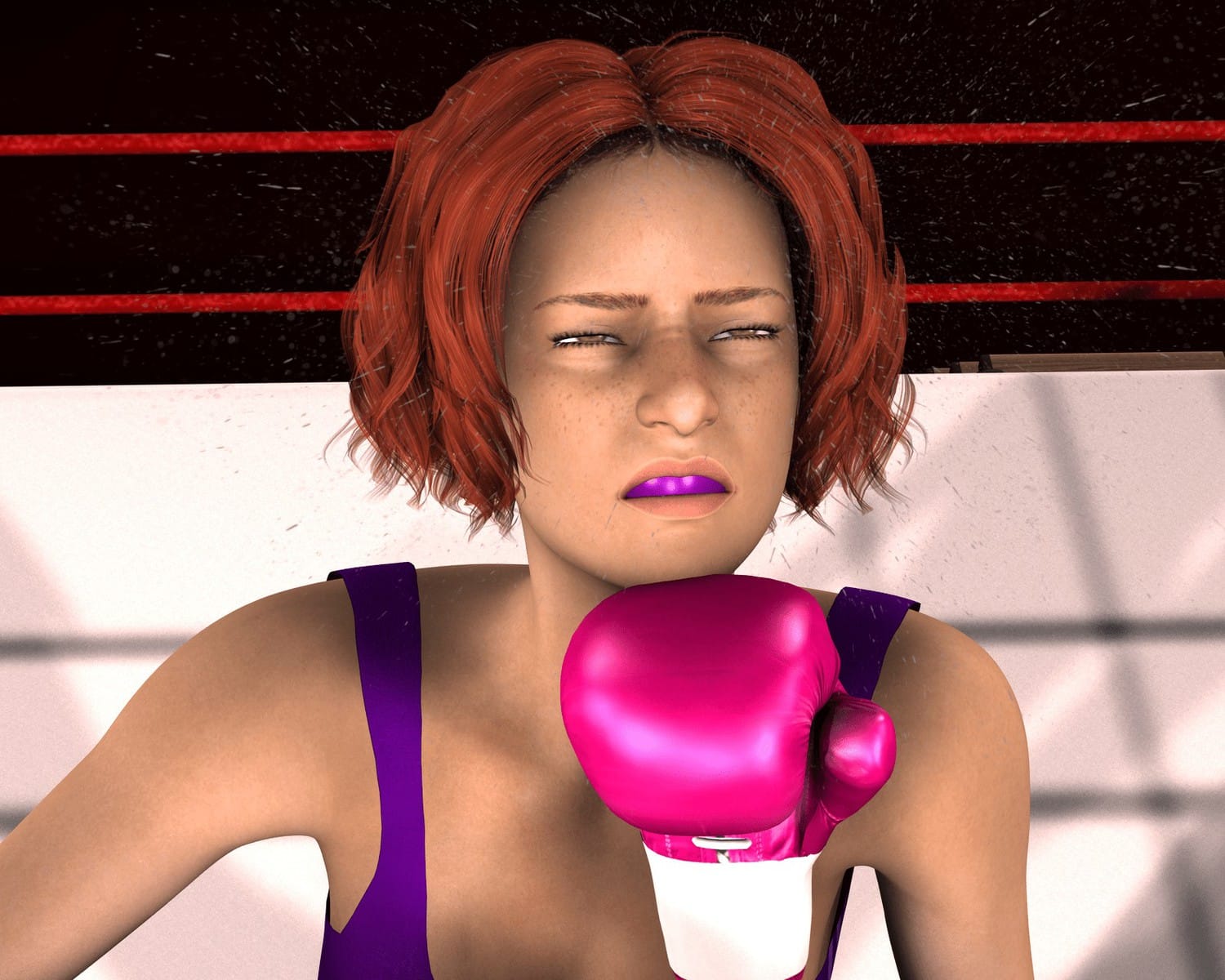 Thomas’s words of ‘Throw Combinations’ are still in my head, so after that uppercut, I torque my body around, sending my skirt flapping and smash home a left hook on my already staggered opponent. The sound my punch makes…it sounds like two cars colliding at an intersection. Concussive, to say the least. 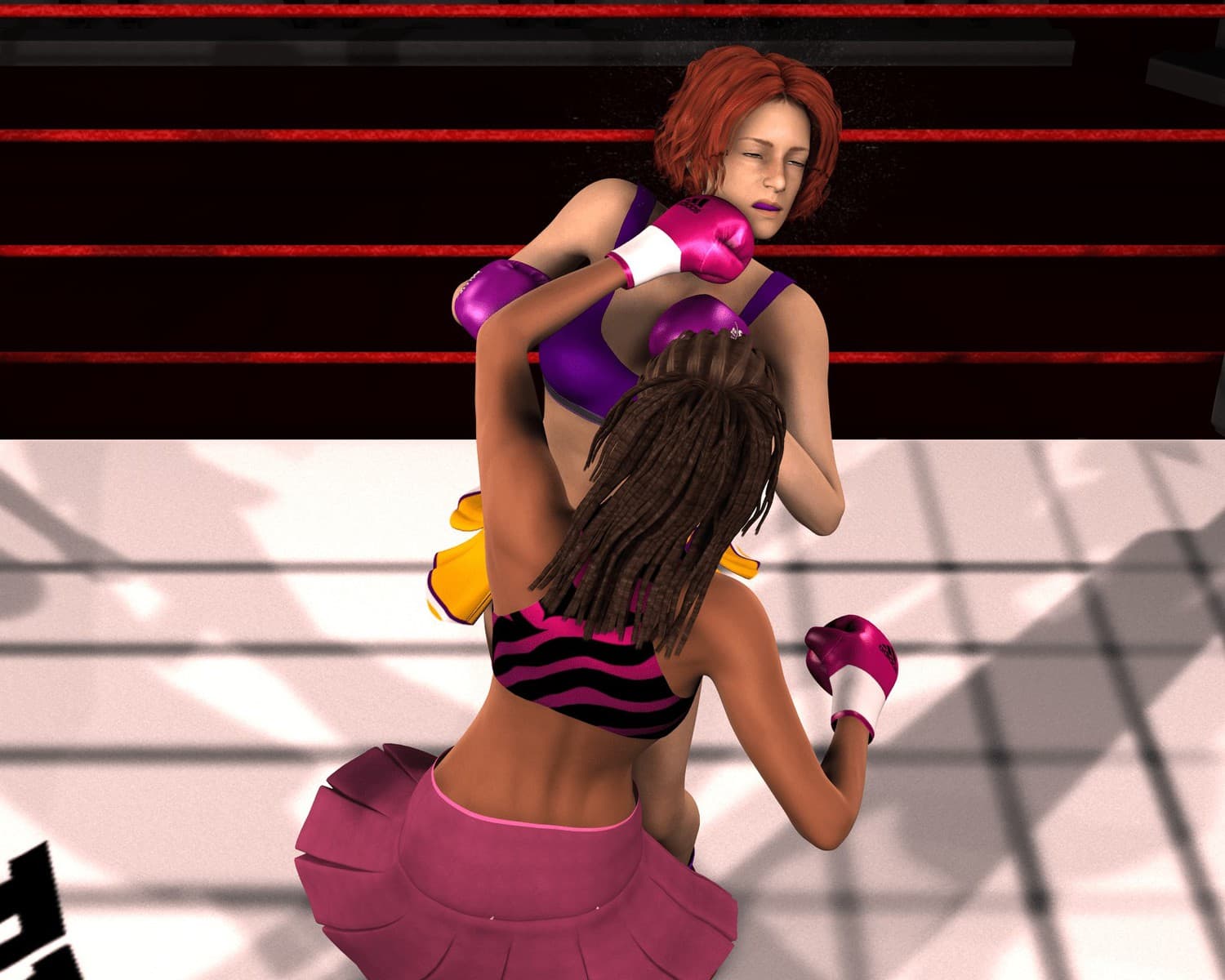 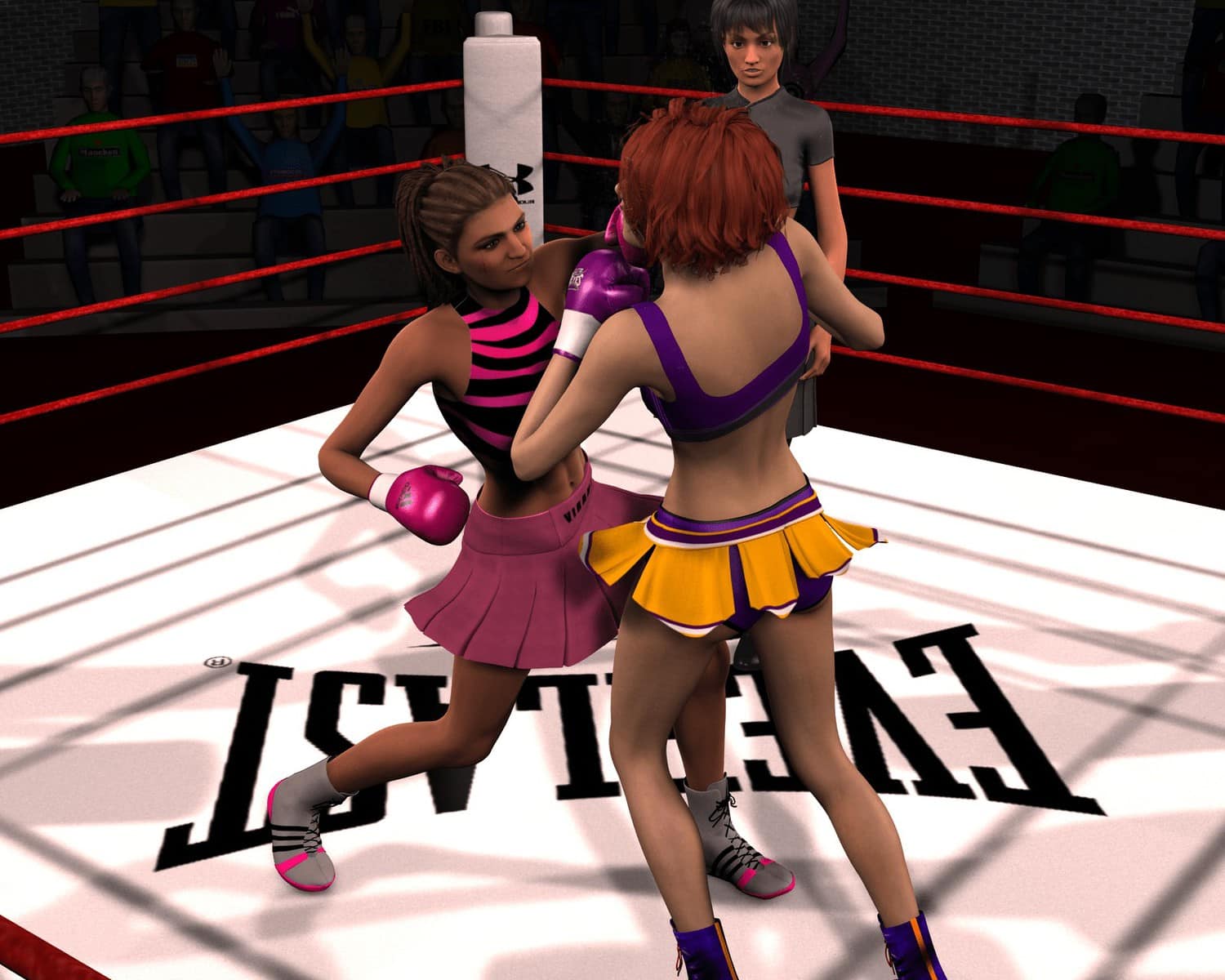 After recieving my left hook, Rachel drops like a stone, sprawling out on the canvas at full stretch. I can’t tell if her eyes are open, but I can tell that she does look very pretty laying out all peaceful like…

I thrust my arm in the air confidently as I walk to the neutral corner. It’s a funny feeling. I feel great, and that tiny little voice in my head that says ‘you really hurt another human being’ is being drowned out. This really does feel great. Stay down, Rachel. 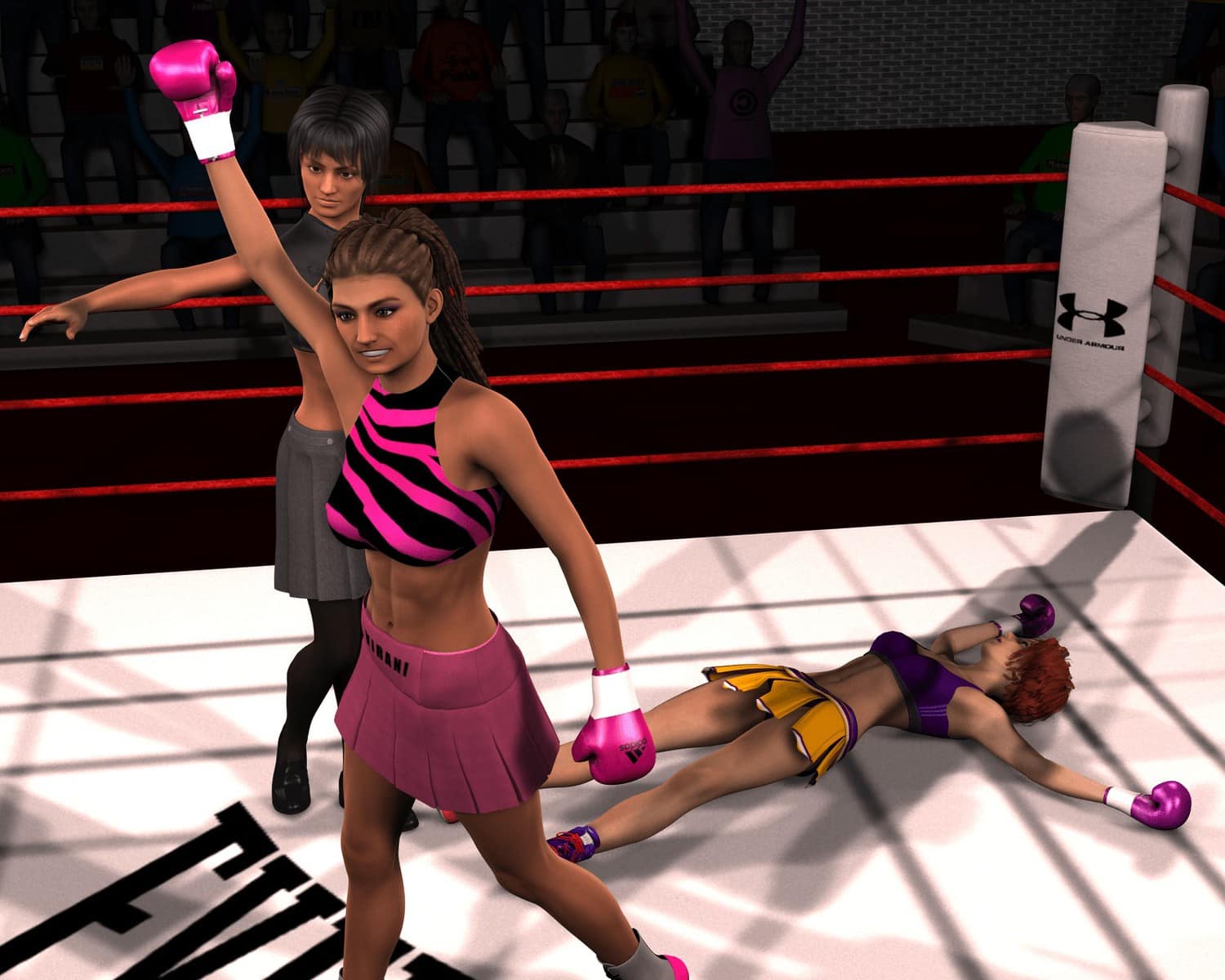 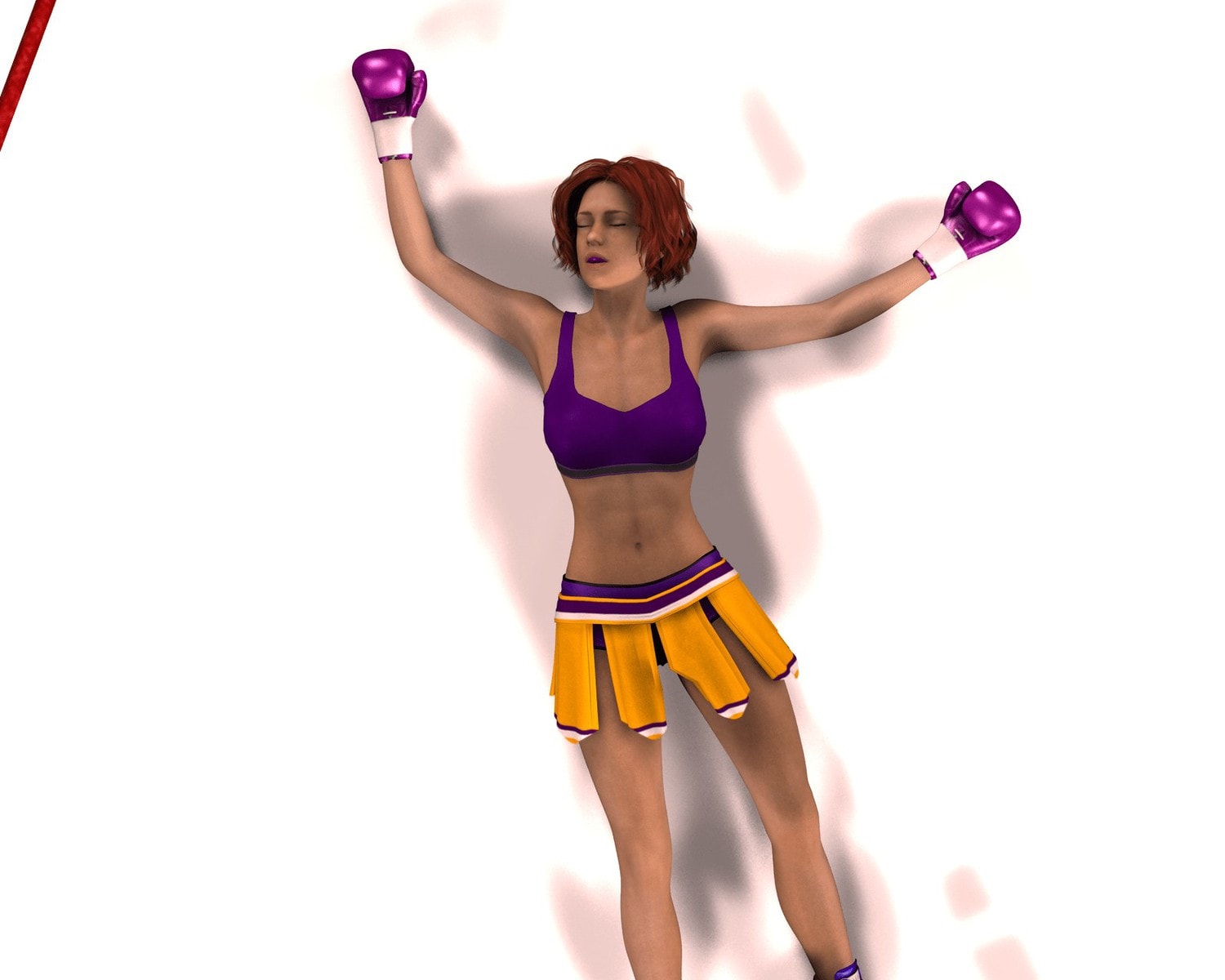 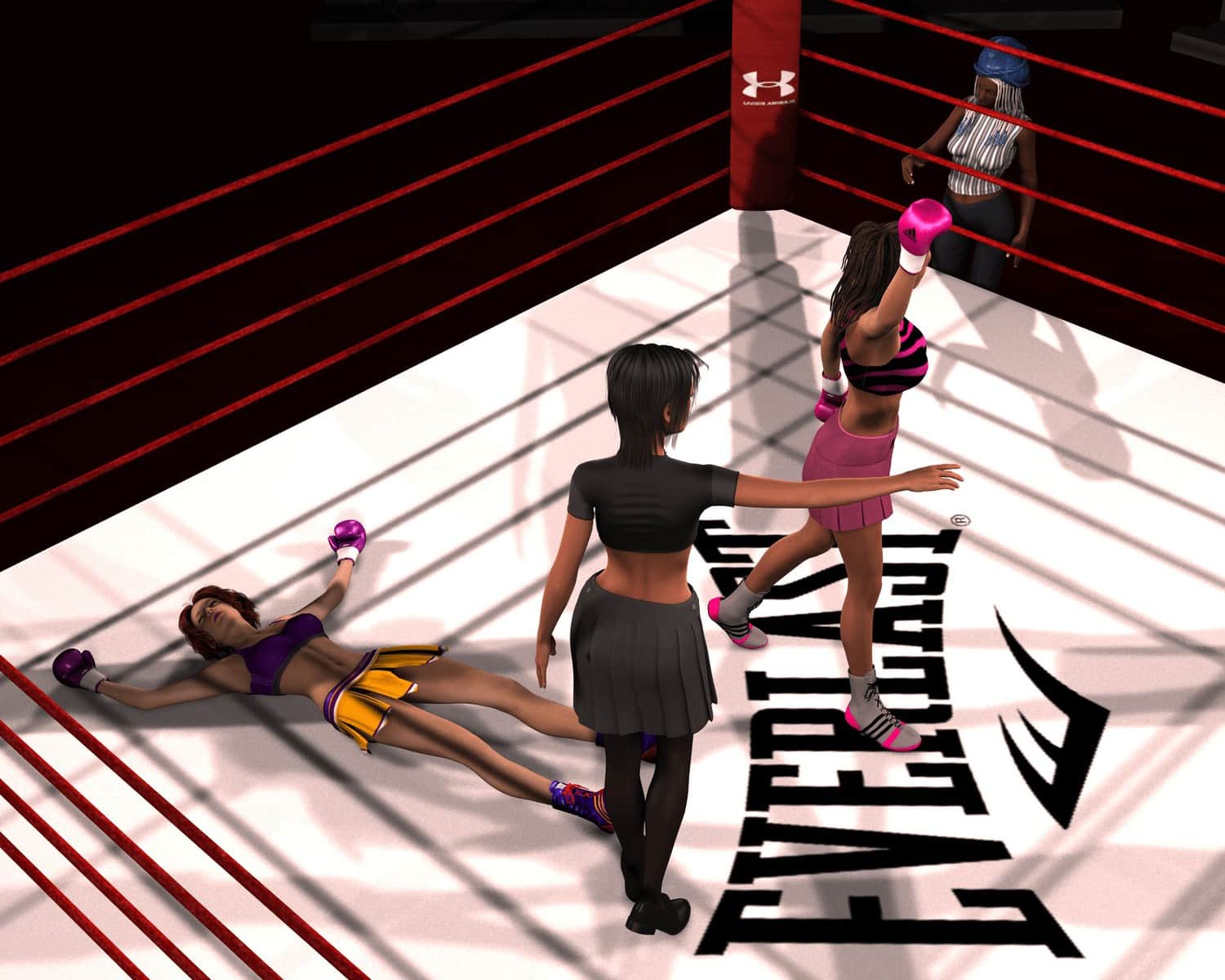 I retreat to my neutral corner, soaking in the roar of the crowd. The crowd is cheering for me, cheering for the punches that just laid Rachel OUT! I turn around to see Rachel still laid out on the canvas. I think that Kanti has probably started up a count (I couldn’t hear it over the crowd), but as she kneels beside the redhead, she quickly determines that Rachel’s not fit to continue and waves off the fight in short order. Maybe she would have given Rachel more leeway if the fight was closer…but it wasn’t.

I guess that means I won…by knockout. Real knockout this time, not some ‘T’KO. 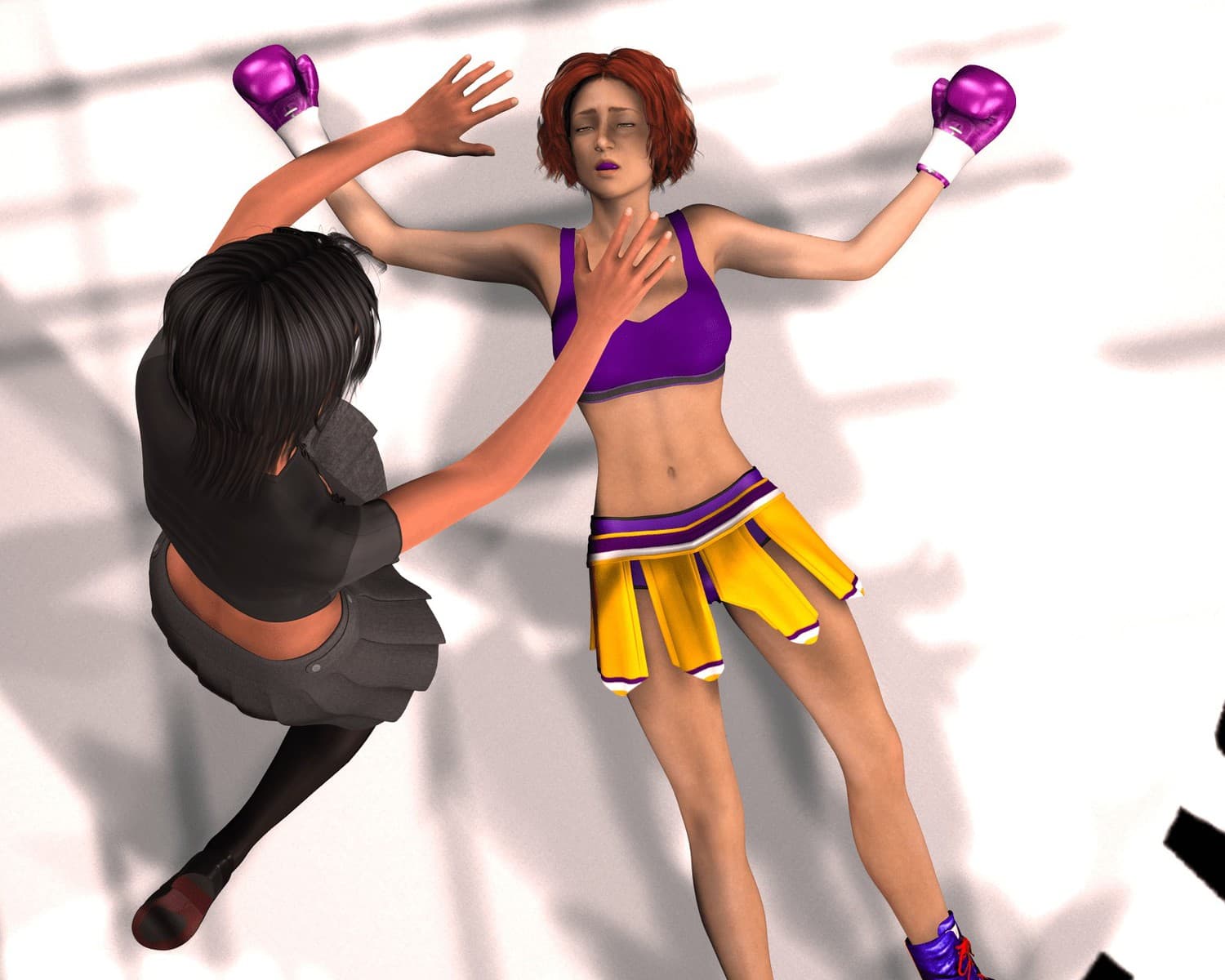 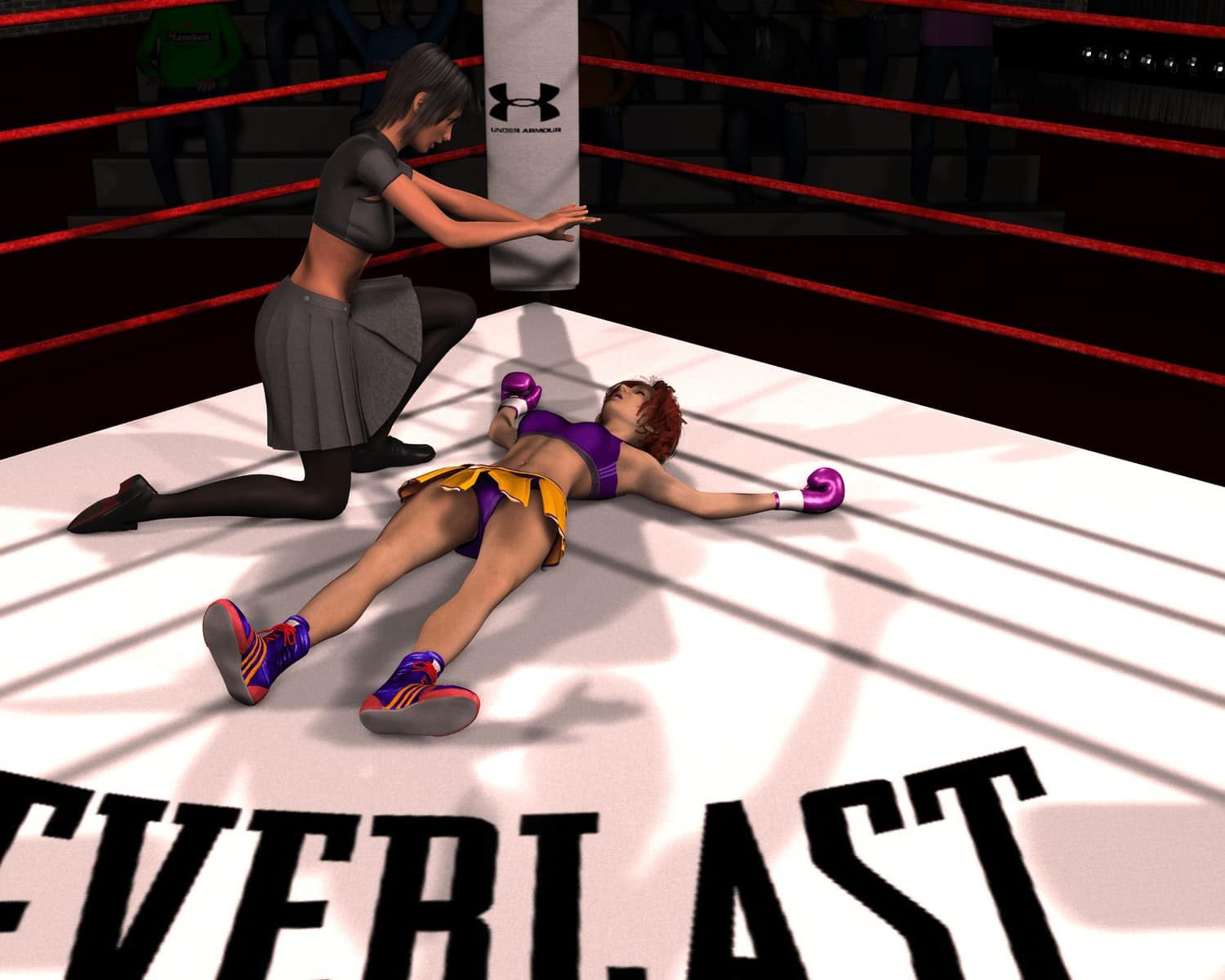 As the result is official, I jump into the air in delight. Holy smokes, I won…I knocked Rachel out! What a rush of adreneline. It’s a bit undignified, I realize after a moment, but hey, a girl has gotta have fun some times… 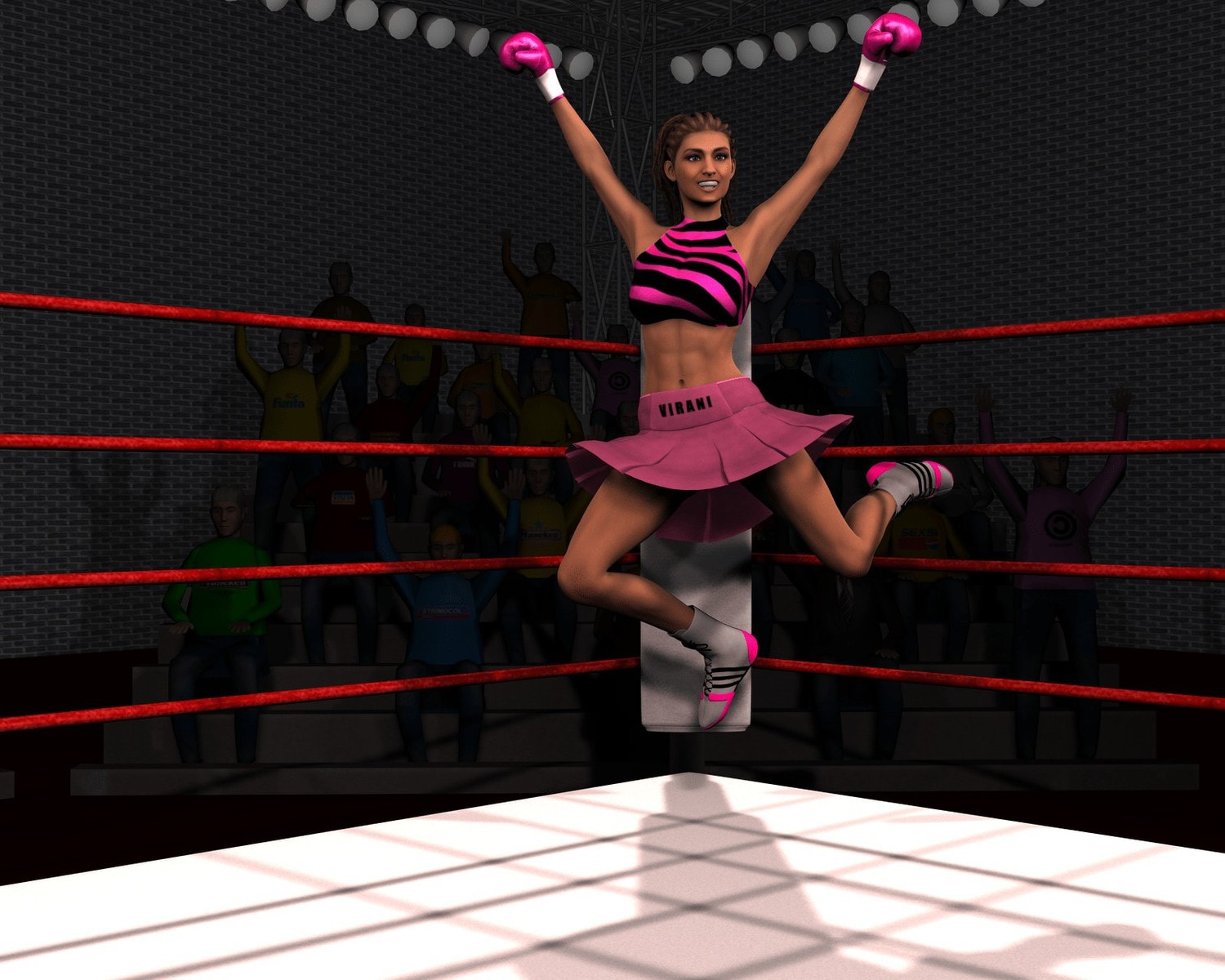 After the fight is waved off, Kanti removes Rachel’s mouthpiece and waves the ring doctor in so that she can check on Rachel. Helen is also quickly in the ring to check on her fighter. Kanti points at me and says “Stay in that corner until I tell you.”

I nod. Though I don’t think that Rachel is too badly hurt – I can already see her talking to the doctor and her coach – I have no intention of getting on the sweet looking, but authoritative referee’s bad side. I have a feeling that I might be seeing her around again.

Thomas carefully slides between the ropes and takes a good look at Rachel before flashing me a smile and a thumbs up. Such a ham, Thomas is. But he’s a great coach, there’s no doubt about that. Just ask Rachel. 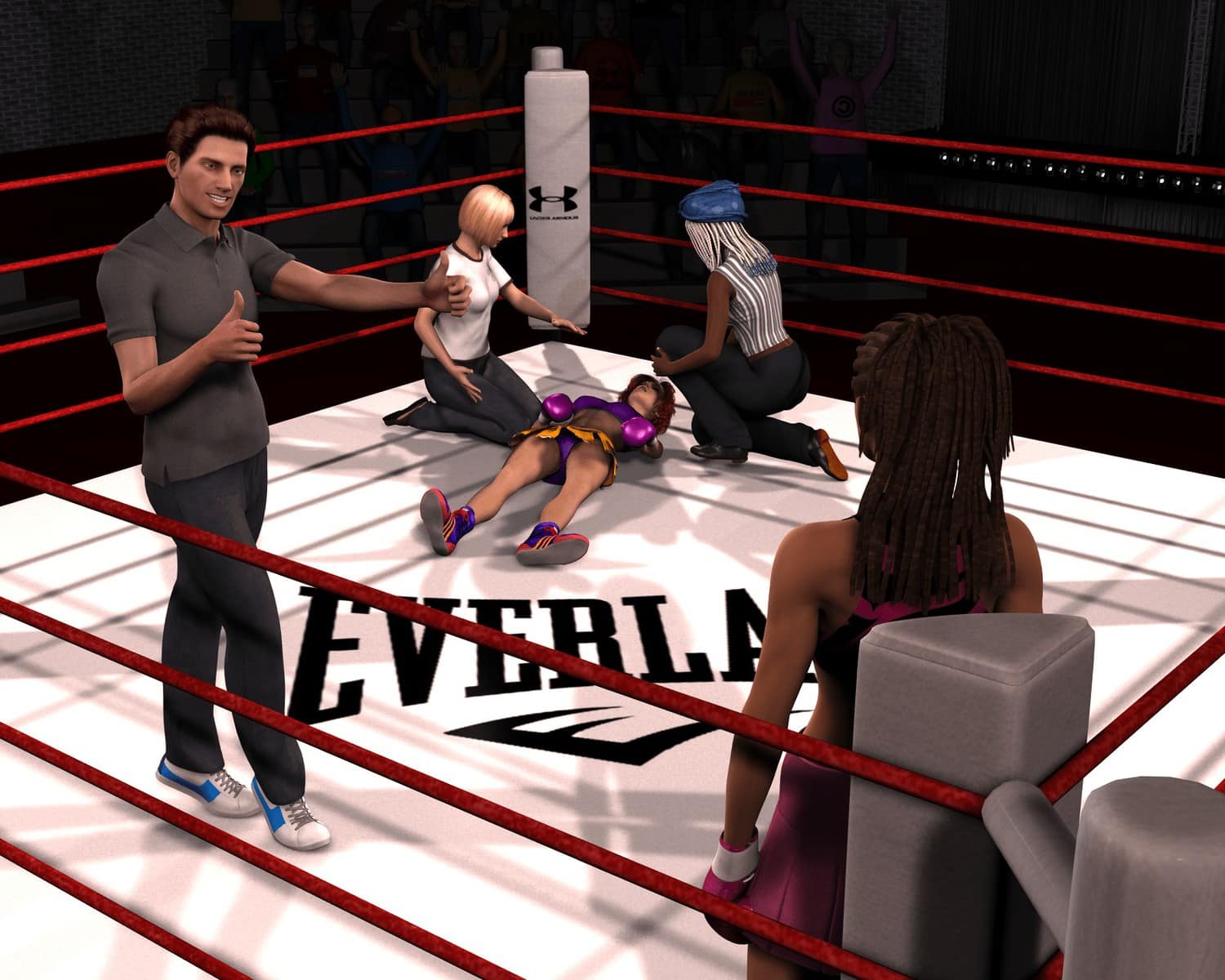 Rachel gets cleared out of the ring – she walks off under her own power, though she’s still a bit unsteady on her feet.

The MC finally gets around to announcing the results, “Ladies and Gentlemen, after thirty-seven seconds of action in the second round, referee Kanti Agrawal has called a stop to this fight, declaring your winner by knockout…. ‘The Canadian Cobra,’ Virani MacVicar!”  The crowd shows its appreciation for the knockout one last time, and this time I really soak it in.  I don’t think I’ve ever experienced something quite like this in my life.  It feels great.

There’s no post-fight interview, just time for another photo with me and Thomas, celebrating a victory.  I’m now 3-0 with two wins by knockout.  It’s crazy to think that not that long ago I was struggling in my first fight against Cynthia.  Now I’m here knocking girls clean out.

I exit through the ropes with Thomas and we have a bit of a conversation as we walk back to the dressing room,

“Thanks, Thomas.  I couldn’t have done this without you.”

“I know,” he replies sarcastically.  He pauses for a moment, “You know you are still bleeding, right?”

That was true…I could still feel the blood dripping down off my face, “I don’t feel it anymore.”

“That’s good…in a way.  But lets get that looked after, okay?”

“And then the hospital,” Thomas said.  “Lets not take any risks.”

“One day I’m going to get tired of your sarcasm, Virani.  Go get changed and we’ll sort it all out.” 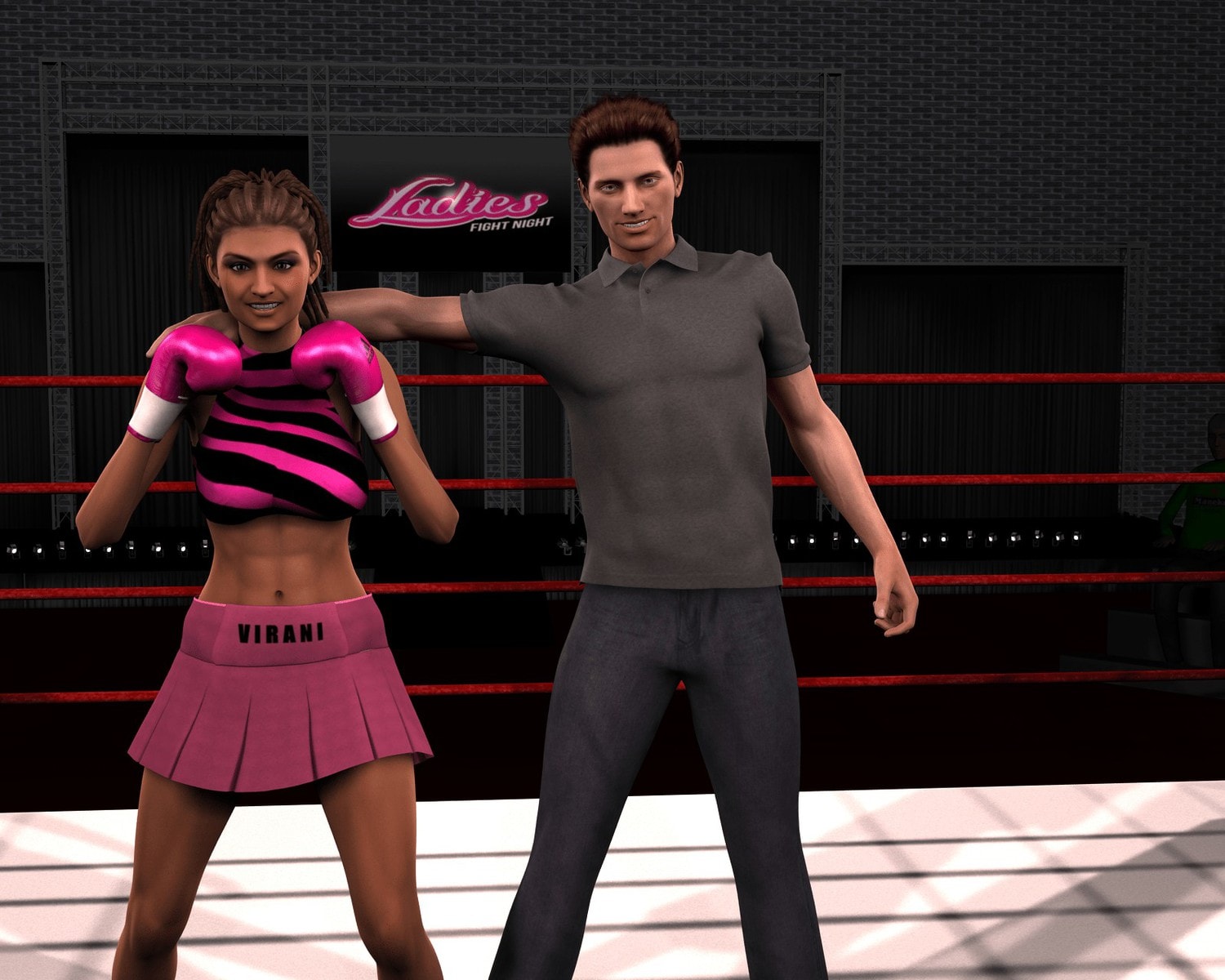 Virani MacVicar vs. Rachel Harmon – Round 1 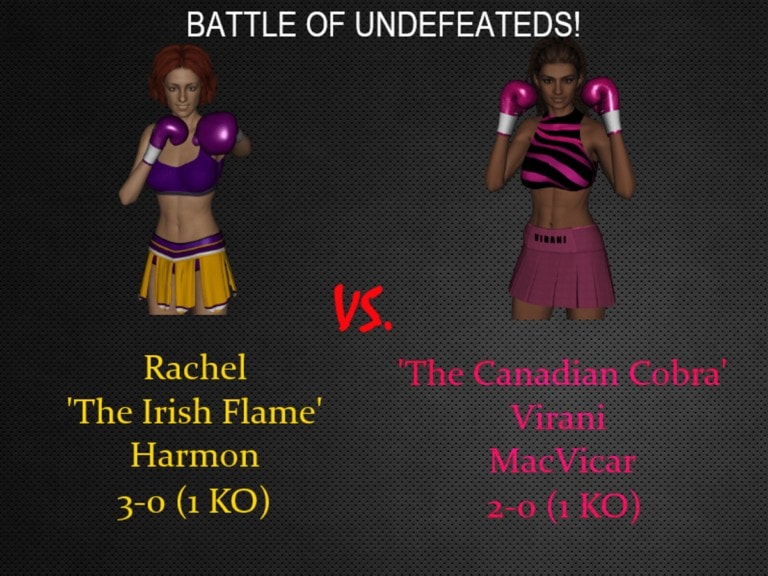 Virani MacVicar
Profile
Current Featherweight champion. A Canadian puncher known for her knockouts that has developed a more all-round style.
Support us
RSS Twitter
Contact PRIVACY
Characters and brands owned by us unless credited otherwise. Real-life elements used only for artistic purposes. You are NOT authorised to make derivatives. Icons credit: Font Awesome.
All rights reserved