It’s amateur fight night at Box-Club Bavaria-Landshut on a Saturday night in November and it’s time for the semi-final of the evening in the Lightweight division.

In the poorly lit and overcrowded setting, Sophie Schumann is about to face Tina Veil, the local gym’s best female fighter and we hear the introductions.

Announcer: “She recently joined Halmich Gym to be trained by the legendary Regina Halmich, who stands behind her. She boasts a stellar record of 28 wins and only 2 losses. She has qualified for the nationals. In the red corner…. Sophie “Picasso” Schuuuuuumaaaaaannnn!

The crowd whistles and boos the visitor, who is very strong but the nasty fighter you love to hate. She looks across the ring and makes a gesture to challenge her opponent to come over. 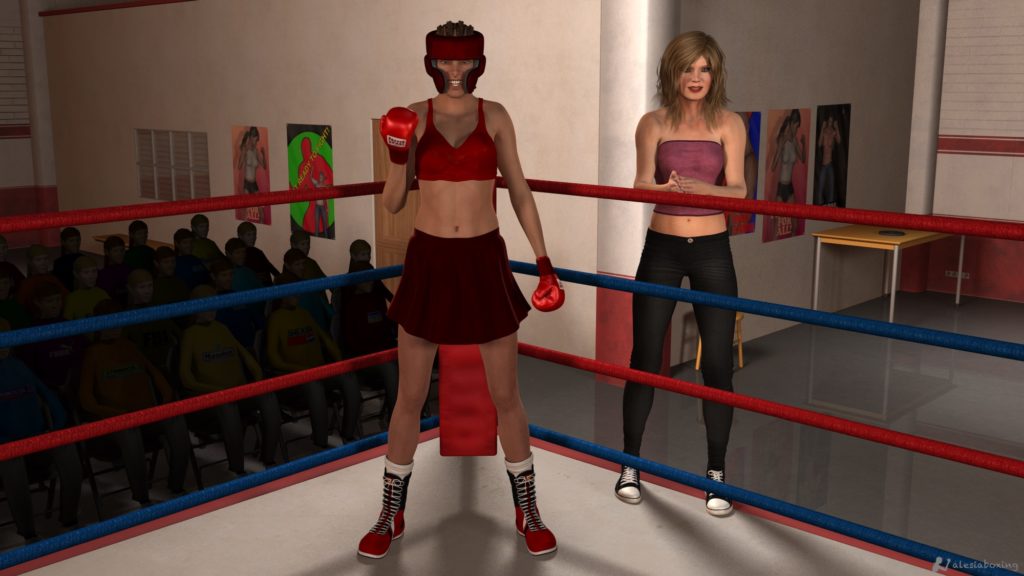 Announcer: “In the blue corner is the darling of Box-Club Bavaria-Landshut! She has 28 wins and 10 losses on record with a silver medal in Bavarian championships. From Landshut… Tinaaaaaaaa Veil!”

The crowd makes noise and applauds the local fave, who raises her right arm to salute her friends, family and gym mates in attendance. She doesn’t look at Sophie, hoping that the atmosphere will help fend off the intimidation factor coming from the red corner. 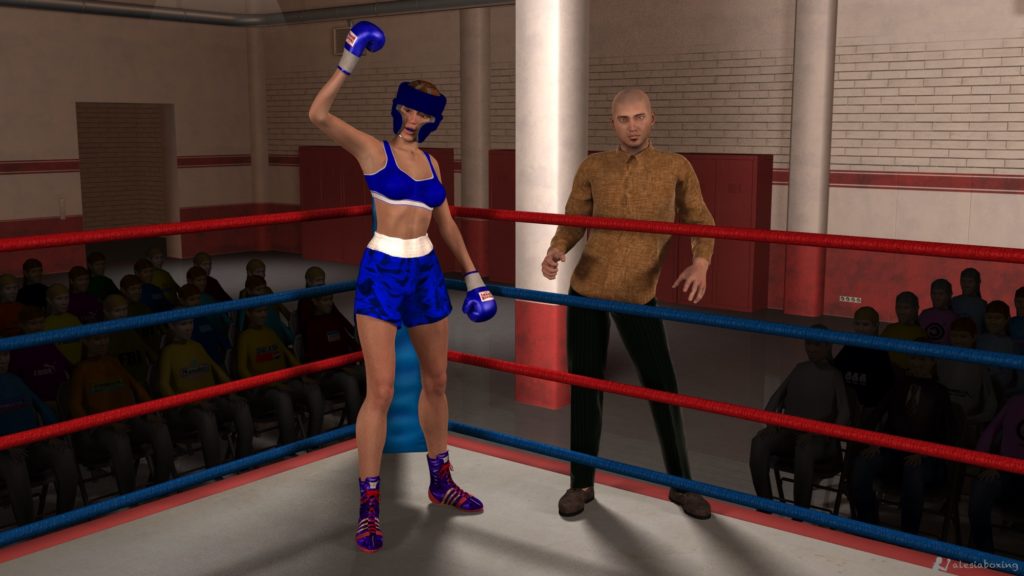 The bell rings and the ref “kicks off” the fight with the order to box. The crowd gets animated in Landshut. Sophie Schumann and Tina Veil get started!

They circle around each other and the first skirmishes give Tina a preview of Sophie’s power. The visitor’s first punches land on the gloves, but they are heavy. They test the girl in blue’s guard.

At 1:29, Sophie lands the cleanest punch of the round so far. Tina wants to keep her away with a jab but anticipation allows Picasso to throw a solid right inside it.

PISH! It snaps her head back. 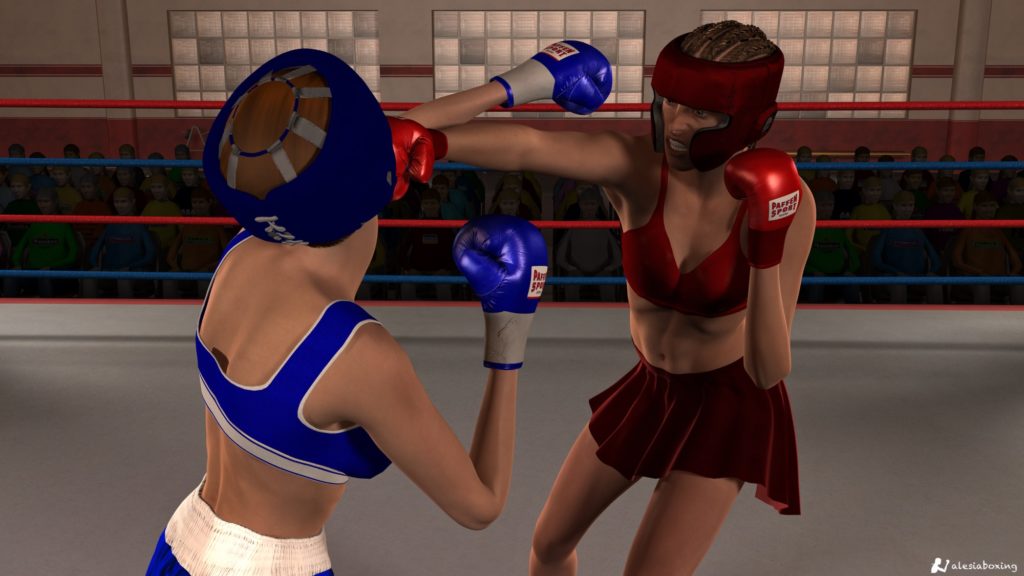 Exchange after exchange, Sophie and Tina wrestle for control of the action but the red girl is the one who takes charge.

Sophie keeps throwing bombs at her opponent and usually lands a clean hit right at the end of a combination. At 0:43, the Münchner has no problem finishing a combo with a straight left hand on the side of her head. She’s also taking her to the red corner.

The local crowd boos in hostility to the disliked visitor.

Regina thinks: “I like what I’m seeing in terms of boxing. It’s unusual to hear the boos, though.” 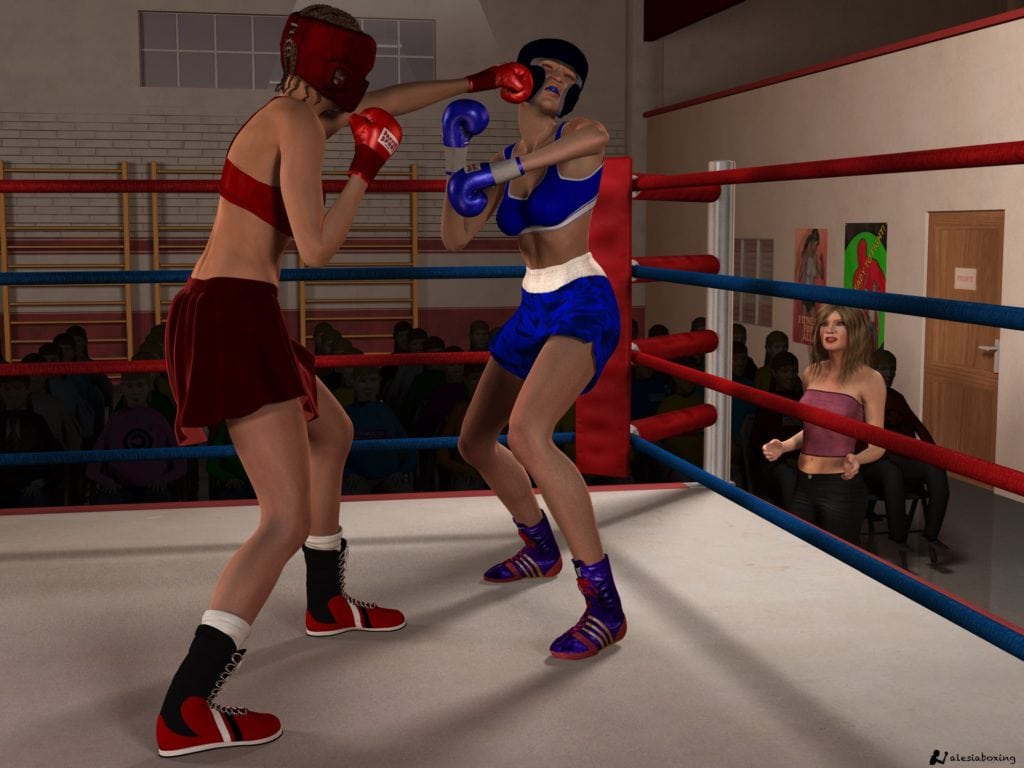 Sophie is power punching her way through Round 1 and Tina is trying hard to fight back without having an answer.

Late in the round, at 0:15, she is still fighting near the ropes with the young Schumann going after her. She is thinking of throwing a right hook to the body to slow her down but her opponent is quick and powerful enough. Sophie comes in with a right hook to the chin inside the guard.

The local crowd is increasingly unhappy. Boos and whistles can’t prevent her from hitting harder and better. 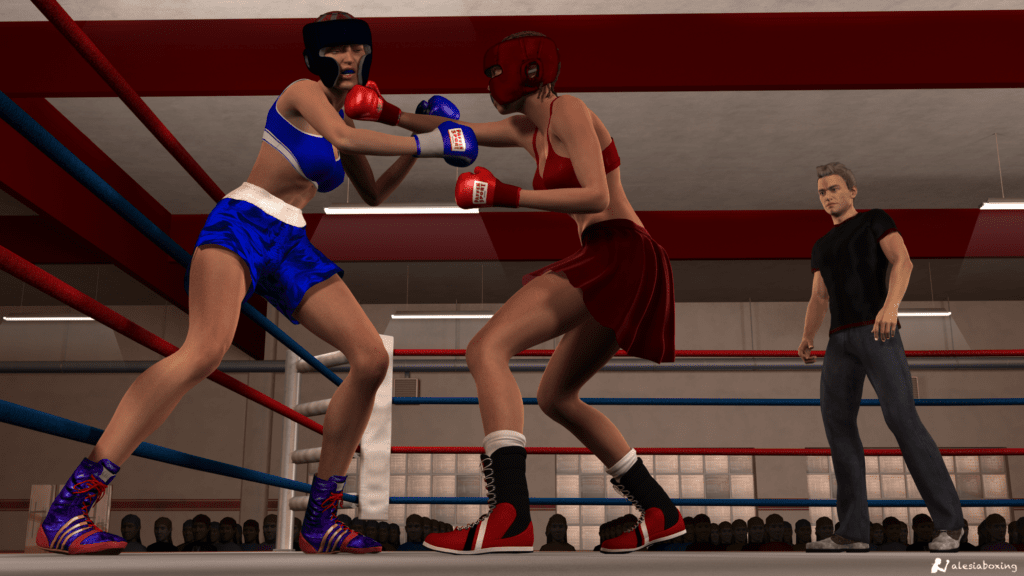 Round 1 ends as a total domination by Sophie. Both ladies go back to their corners for advice.

Tina’s coach is not happy in the blue corner: “Look, you’re not fighting your fight at all. You’re too easily intimidated by her.”

Tina: “Her punches are so heavy!”

Coach: “Your punches are good, too, but you need to try harder to land them. Counter her left hand to start things. Your overhand right is the best shot you can land when you time it properly.”

Coach: “When she starts moving her left shoulder, go overhand. Every time.” 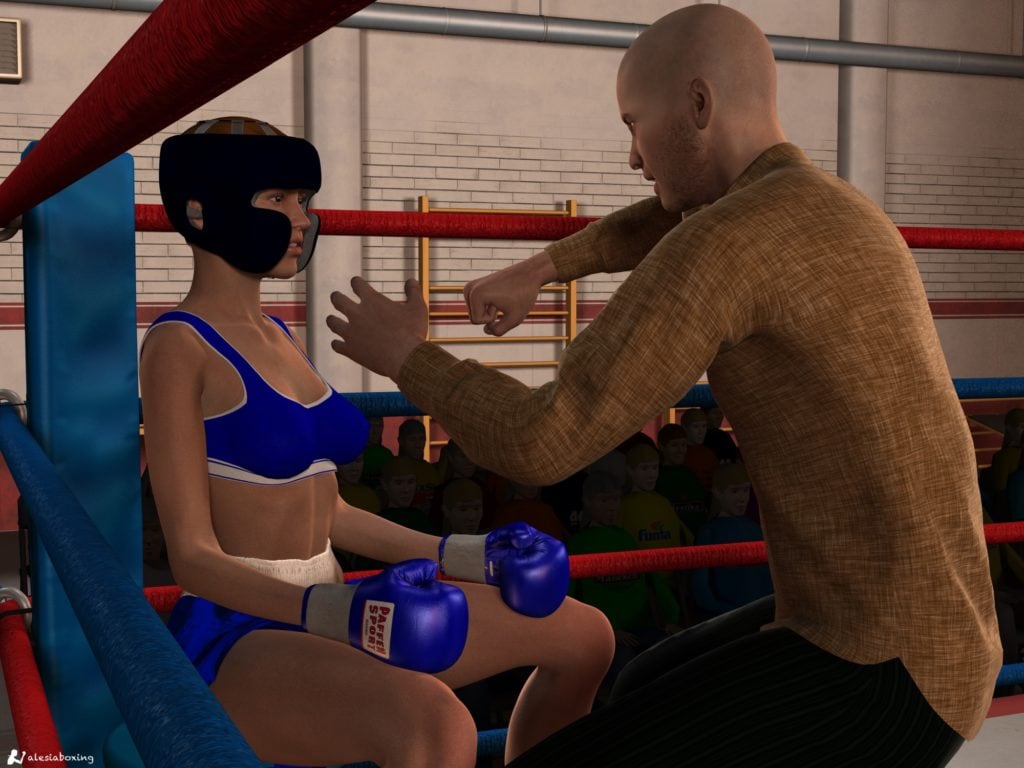 Back in the red corner, Regina has much better words for her new protégée.

Regina: “Solid job.  She doesn’t know what to do against your power and she keeps backing up.”

Regina: “Bring more variation to avoid being predictable, though. Mix it up with hooks, body shots and uppercuts to keep her guessing.”

Regina: “Winning will be enough, dear.” 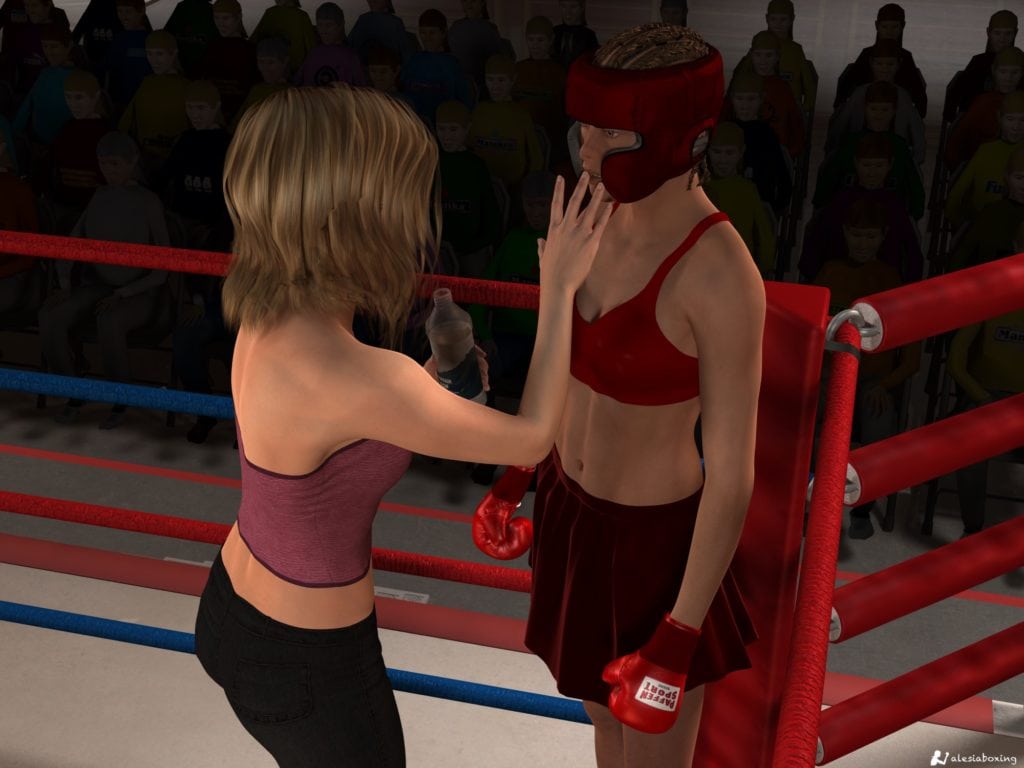 Alex, the ref, calls both ladies to the middle of the ring for Round 2 to begin.

He looks at Sophie and then at Tina to make them come forward. Just as he looks at Tina, Sophie makes a cut-throat gesture to scare her.

The crowd starts booing and whistling again. Tina’s coach points in her direction to protest at the gesture, but the ref hasn’t seen it.

The visitor is making new enemies and she loves it. 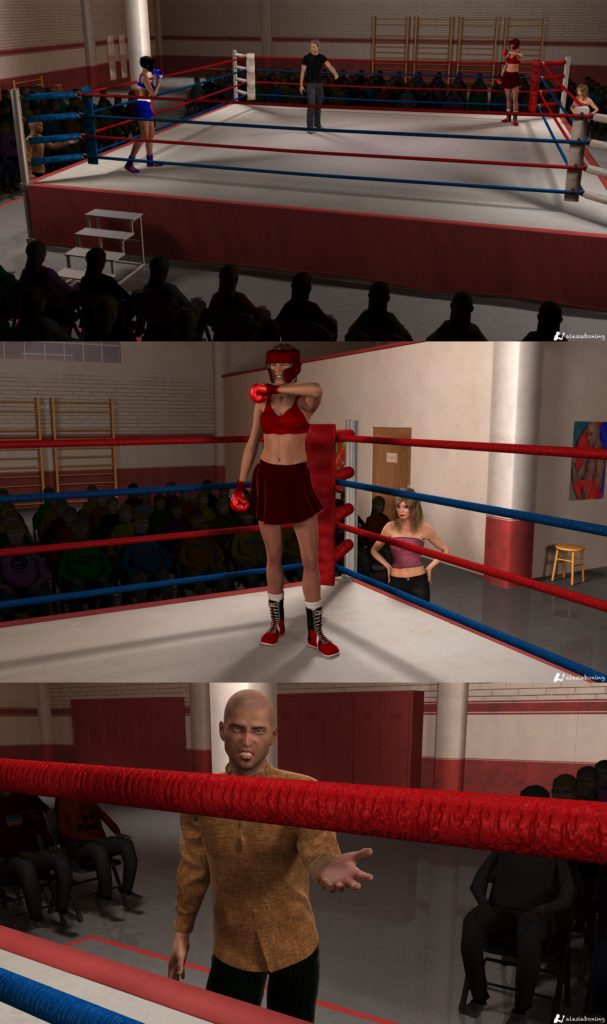 Poor Tina is not having any more fun in Round 2. Sophie keeps attacking and putting her under pressure.

The local does apply her coach’s advice, though, when she tries to go for the overhand right. Sophie starts moving her shoulder but it’s not the jab that pops out. A left hook goes under Tina’s arm and smacks her hard on the cheek. She groans. Her coach and the crowd are dispirited.

Alex thinks: “This is amateur boxing. If she keeps taking clean power shots, I will have to stop the fight because safety is first. But is it the right time?” 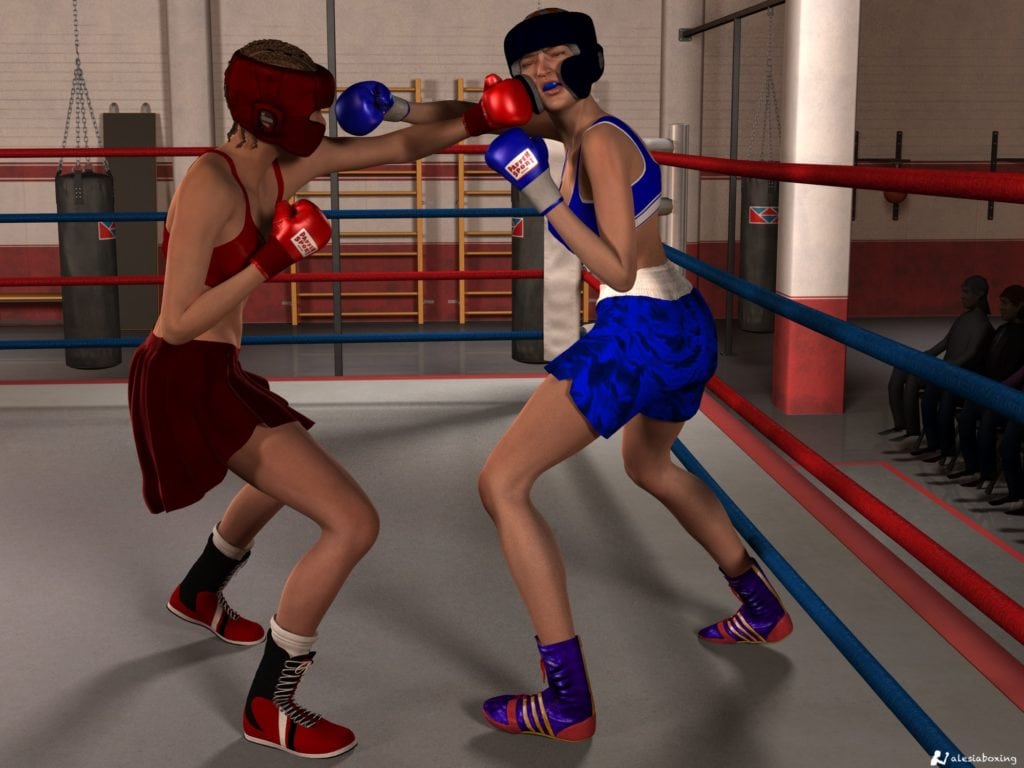 Tina stumbles after taking a left hook and she’s in trouble. Enough to put an end to an amateur fight.

Sophie doesn’t listen. She comes forward to land a massive right hand on the chin of the stumbling girl, who can’t defend herself with her back against the ropes.

The boos and whistles recommence. Tina’s coach is going mad.

Alex comes closer, steps in and puts his arm out to stop the action.

Sophie wins with an easy stoppage against an opponent who has ring experience. Not without having given the extra shot! 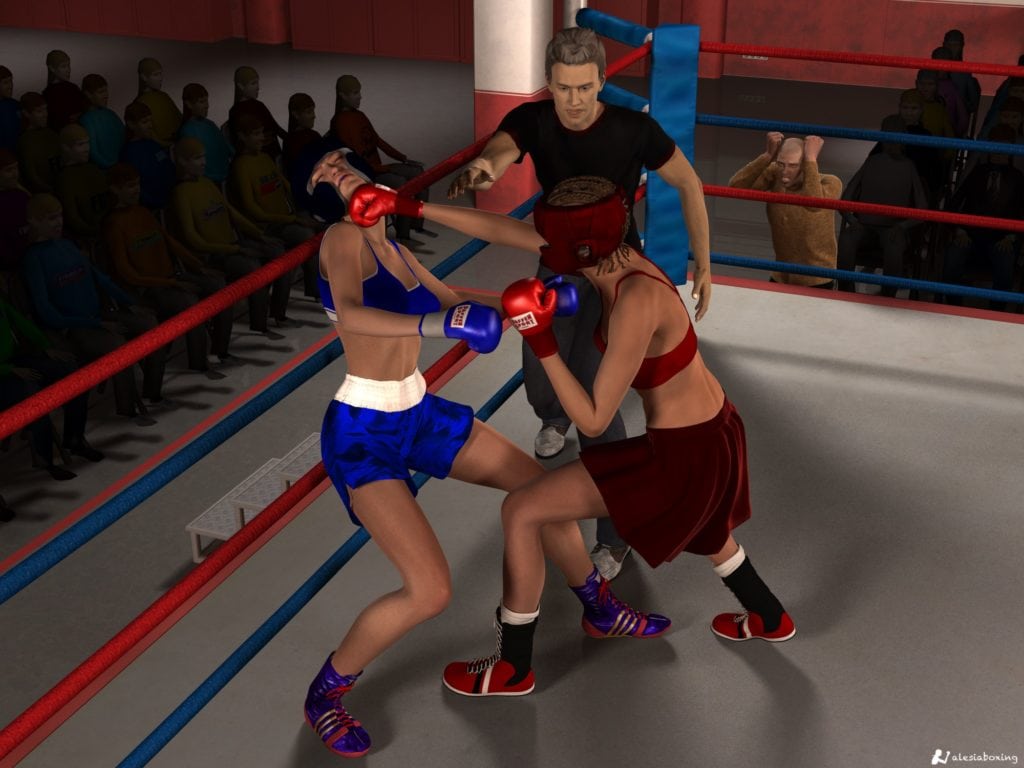 Just as for any fight, we go through the official particulars to announce the winner.

Announcer at ringside: “Ladies and gentlemen, we have a winner. By stoppage, she has 33 wins and only 2 losses, without a draw. From Munich, Sophie Schumann!”

Alex isn’t happy with her behaviour but he has no reason to disqualify her. It doeshappen that fighters don’t listen in the thick of the action, so he can’t prove intent. 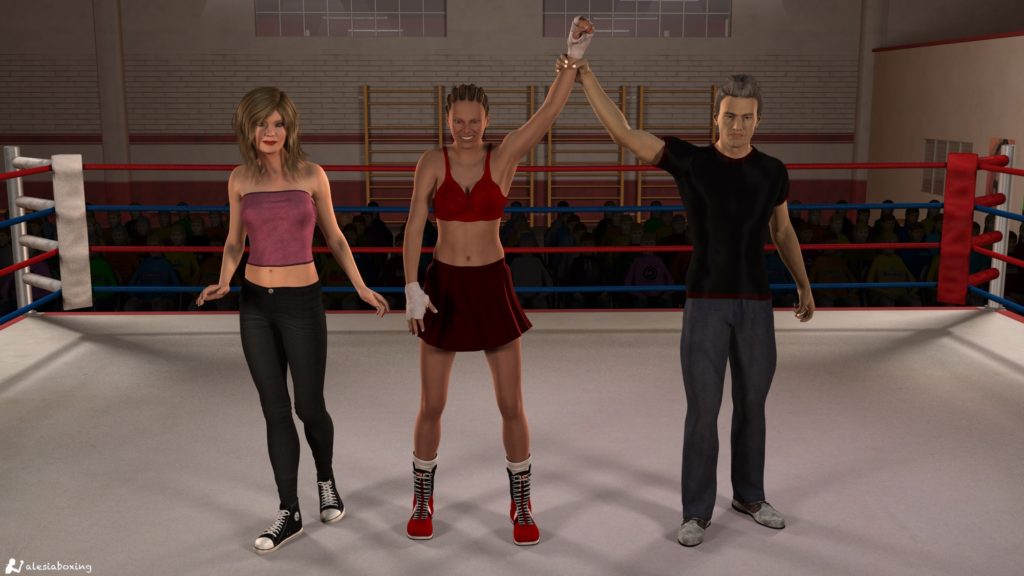 Sophie asks for the announcer’s microphone after being declared the winner of the fight.

Everybody in the room goes quiet, hoping that she will offer soothing words about doing certain things in the heat of the battle.

Sophie: “I had no problem mopping the floor with the local fave, did I?”

Boos and whistles resume, this time stronger than ever.

Sophie: “Tell you what: if Tina wants a rematch, I’ll take her on. Any time, any place. It’s always good to pad your record.”

At ringside, Regina and Alesia are watching. Regina isn’t particularly happy with how she’s rubbing it in.

Sophie: “I mean, she has experience, but clearly not at my level. Anyways. This was fun. That’s all I wanted to say.” 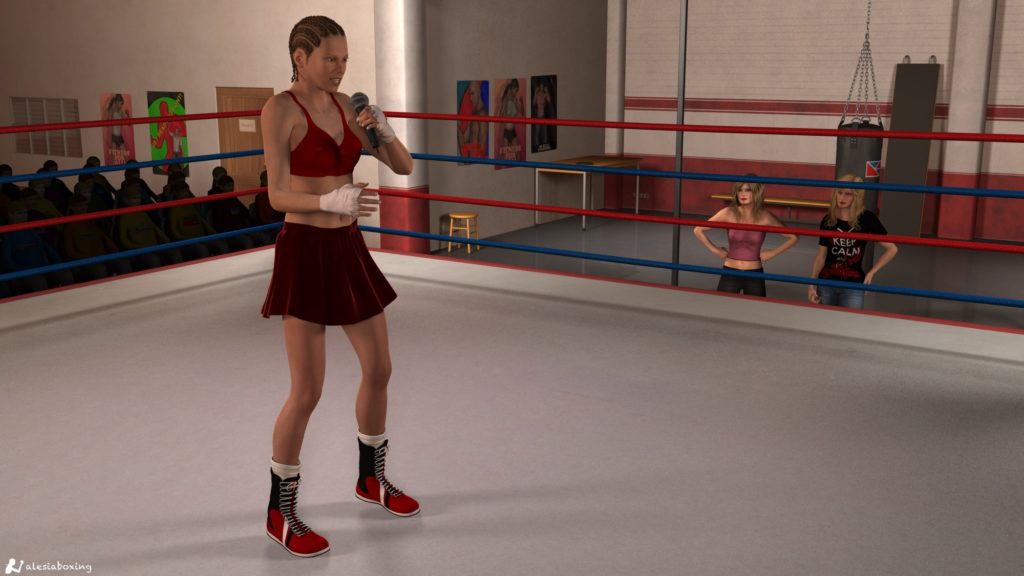 Reacting to the boos and whistles, Sophie bows after making her short speech.

The crowd keeps bringing on the hate, which only makes her smile.

Sophie walks out and joins Regina and Alesia. On her way out, she hears “bitch!” and “idiot!”.

Once in the dressing room, the coach scolds her fighter.

Regina: “Look, it’s one thing to intimidate opponents and bend the rules until you get a warning, but insulting everybody after winning isn’t cool. I don’t want you to do that again!”

Once Sophie and Ally are alone…

Alesia: “It can be fun to do, but it will bite you in the ass later on. I don’t think Regina will tolerate these things for long.”

Sophie: “Sorry, I couldn’t help it. It… just happened.” 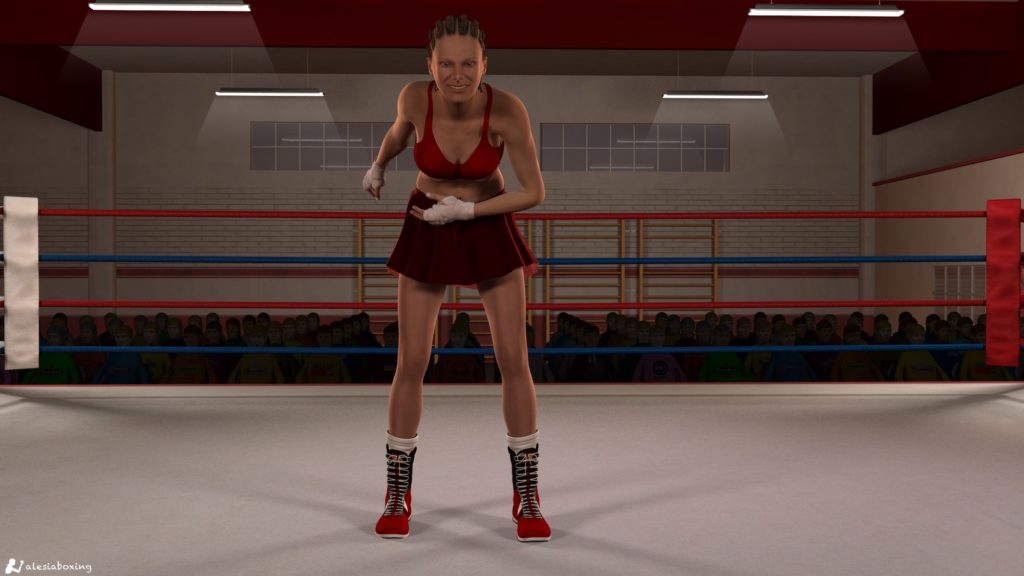