Commentator: “And we are about to begin this bout.  6 rounds in the featherweight division between up and coming Kayleigh ‘The Fluke’ Parsons and Emma ‘The Peach’ McGale, who will hope to upset the applecart, though she has a tall task in front of her.”

Virani: Who in the blue hell is Emma McGale?  For obvious reasons, I have a pretty good knowledge of the various featherweights across the world.  I don’t recall ever hearing about Emma McGale.  I quickly search for her and find her record on boxrec.com.  When I see her record, I groan.  Emma is 4-3 with one stoppage victory to her name – a TKO victory over a 1-4 Bulgarian.  She’s also been stopped in two of her three losses, including her most recent outing.

In short, she’s a tomato can.

This isn’t a serious fight.  There’s no way in hell that Kayleigh is going to lose.  This is just a showcase for Kayleigh’s talents.  I sit back on the couch and cross my arms across my chest.  No wonder I hadn’t heard of Emma McGale.  At least she was cute. 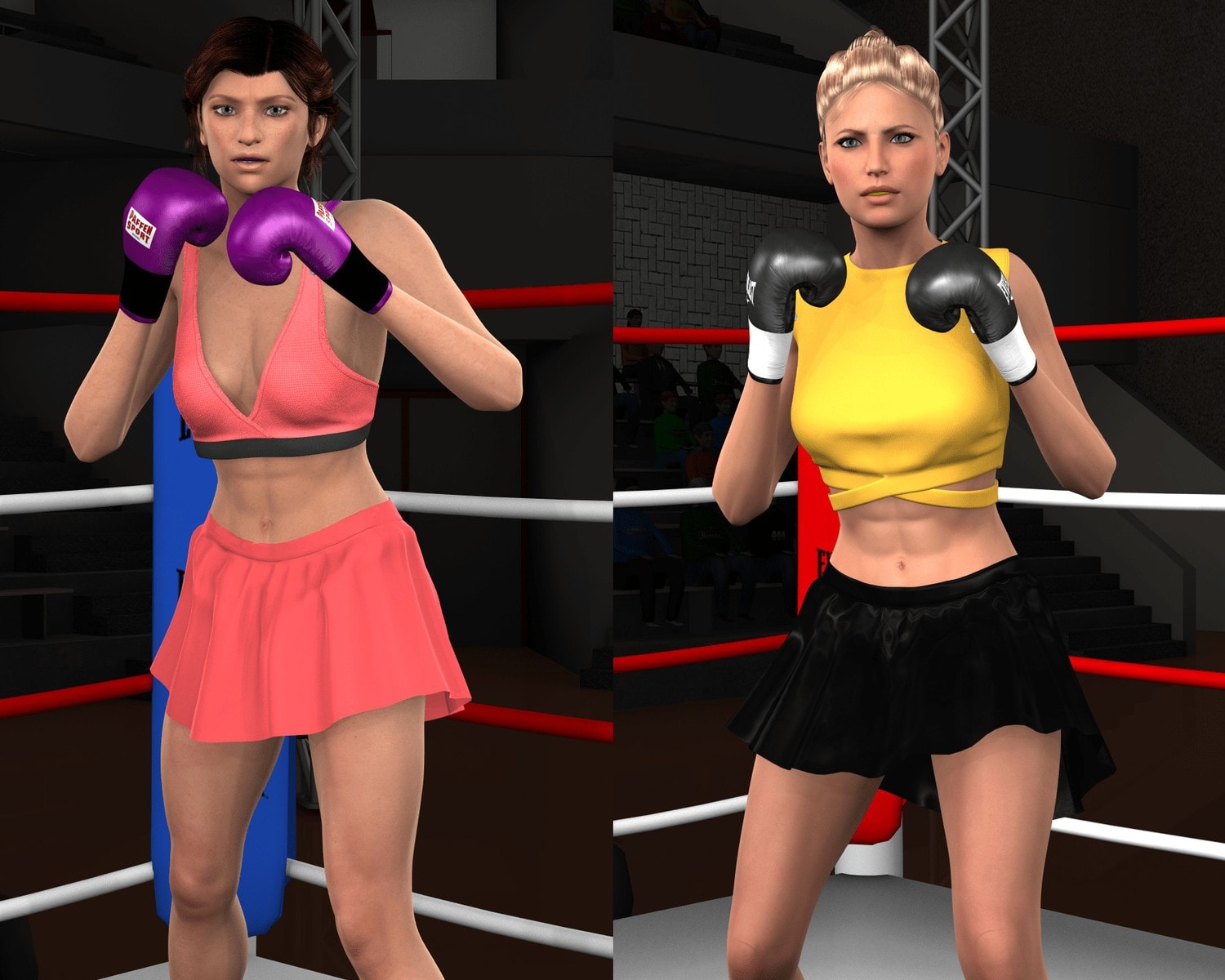 Commentator: “Well, you have to say that Emma McGale does not seem to be afraid of Kayleigh Parsons in the early going.  She’s a bit flatfooted though as she tries to attack Kayleigh with some light jabs.  Parsons handles the jabs with ease, keeping the right distance away from McGale.  Kayleigh has talked about going back to her amateur roots and rediscovering that part of her game, and she seems to be sticking to that idea here…”

Virani:  Kayleigh seems smooth in the early going, not at all phased by Emma’s aggressive approach.  Of course, she’s not exactly facing a hugely skilled opponent, so she can afford to be a bit more calm in there.  Still, I am impressed by the little movements she makes to avoid Emma’s jab.  A slight lean backwards makes Emma’s jab fall way short.

I have to say that I love Kayleigh’s new outfit.  Girl’s got style. 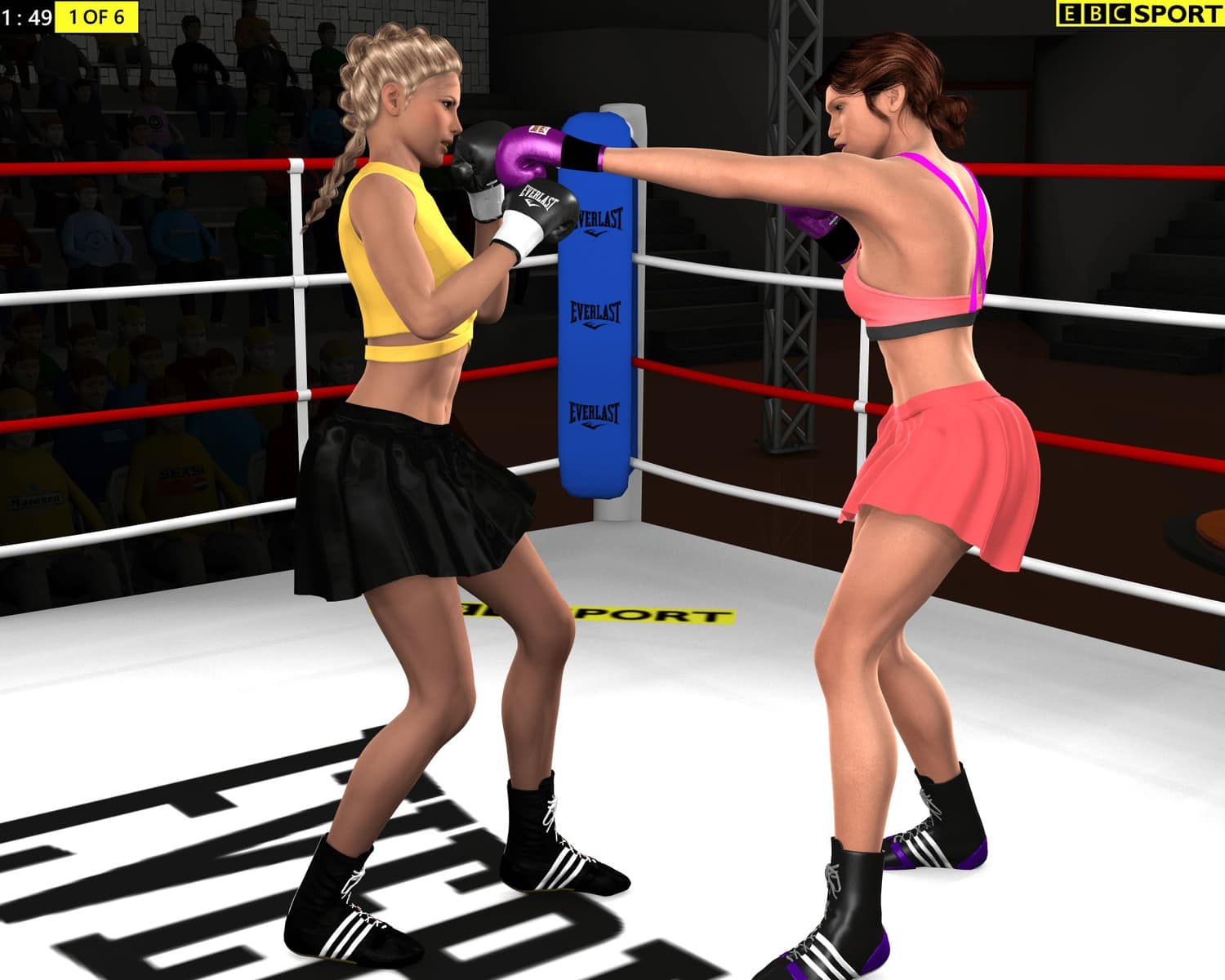 Commentator: “While Emma McGale tries to find the range, Kayleigh Parsons has begun to find hers.  A couple of jabs land, and then she snaps a good straight right hand to the body before taking a step back and resetting.  Nice boxing from the former amateur standout.”

Virani:  The difference in class here is disturbingly apparent, just 19 seconds into the fight.  Kayleigh paws high with a few jabs before unleashing a lightening quick right hand to the body.  The most impressive thing she does is that she sees Emma’s counter coming, and has her left hand up to guard against the hook that Emma wants to throw.  Kayleigh has very nice technique, I admit. 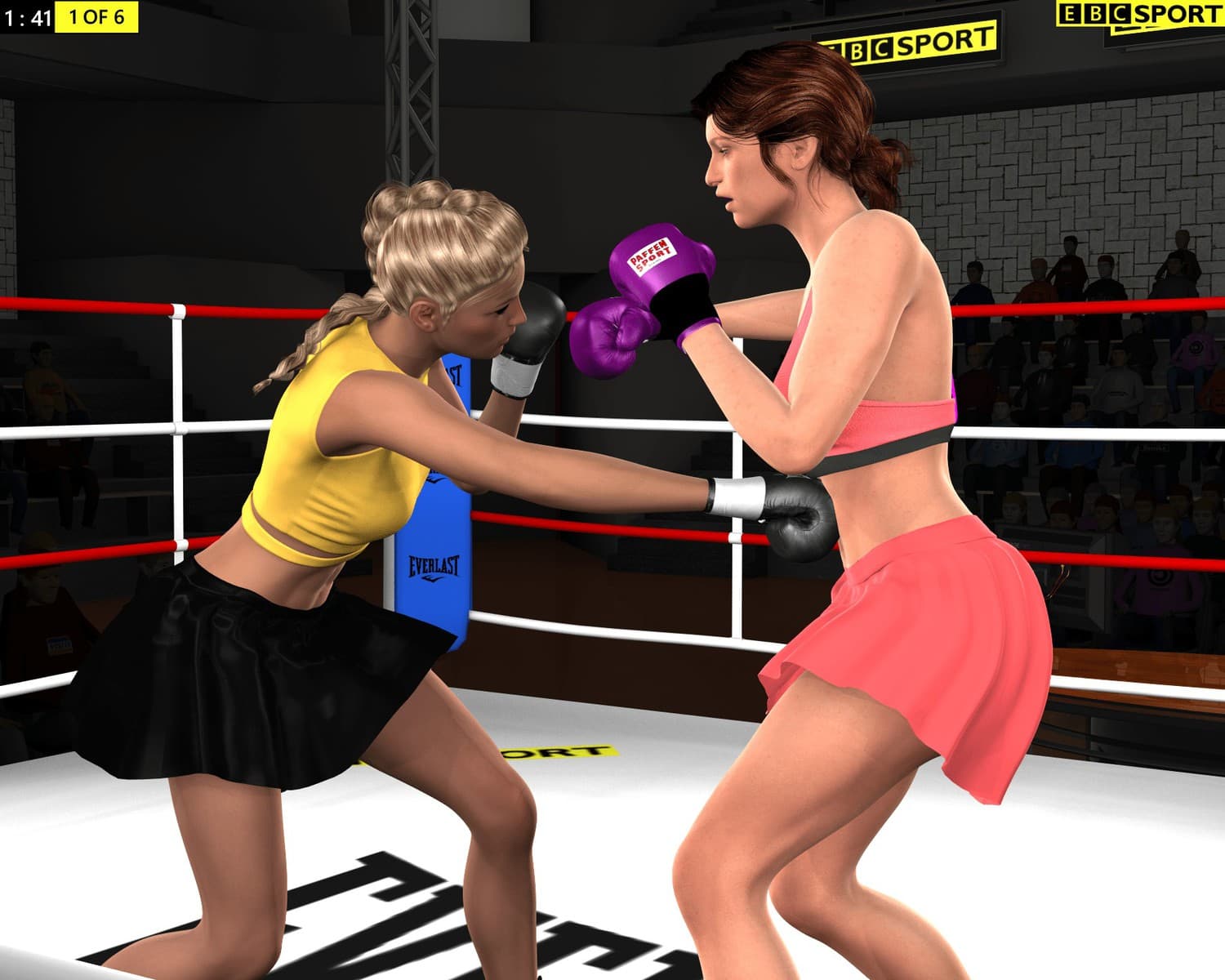 Commentator: “Kayleigh Parsons has put an emphasis on being elusive early in this fight, I don’t think Emma McGale has made solid contact with her yet.  It’s not for a lack of trying though, as McGale fires off a good right hand that Kayleigh avoids.  Lovely movement from ‘The Fluke.'”

Virani: Emma may be outclassed, but she at least wants to attack.  That’s encouraging.  But Kayleigh is equal to it, sliding out of the way of a good right hand.  I watch the way that Kayleigh avoids the punches.  It’s not quite as smooth or as practiced as someone like Alesia, but it is effective.  I know I’m not the same kind of fighter that Kayleigh is, but I wonder if I can add this to my own style. 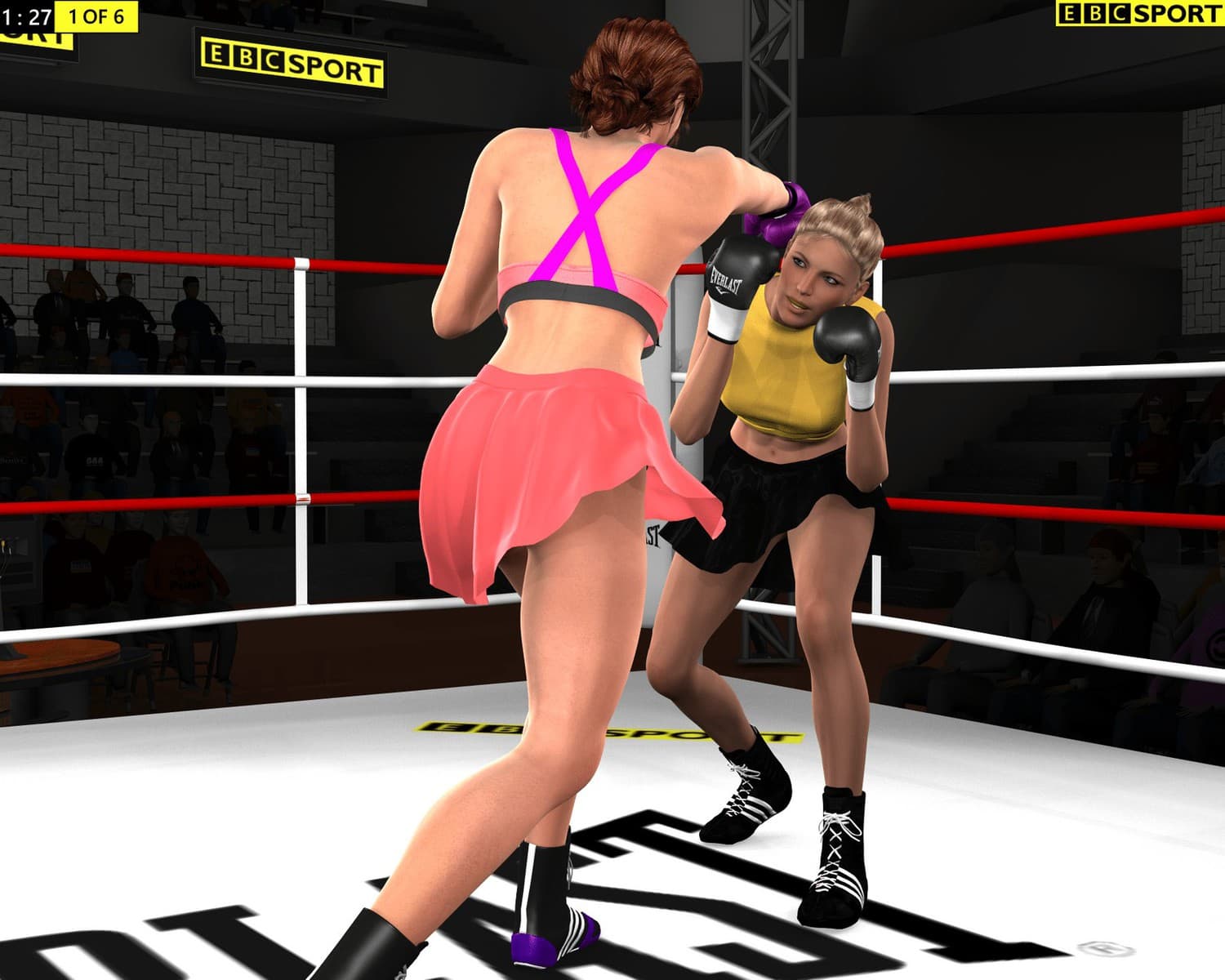 Commentator:  “Parsons has displayed some slick defence, but now she will have to find a way to land some punches.  And just as I say that, Kayleigh finds a home with a solid right hand.”

Virani: Kayleigh seems to have had enough of playing passive, and she ups the tempo a bit, moving her hands in an attempt to confuse Emma.  It works, and it freezes her defence for a split second, which is enough time for Kayleigh to fire home a right hand.  Emma’s inexperience tells.  She’s easily confused by Kayleigh’s more advanced techniques… 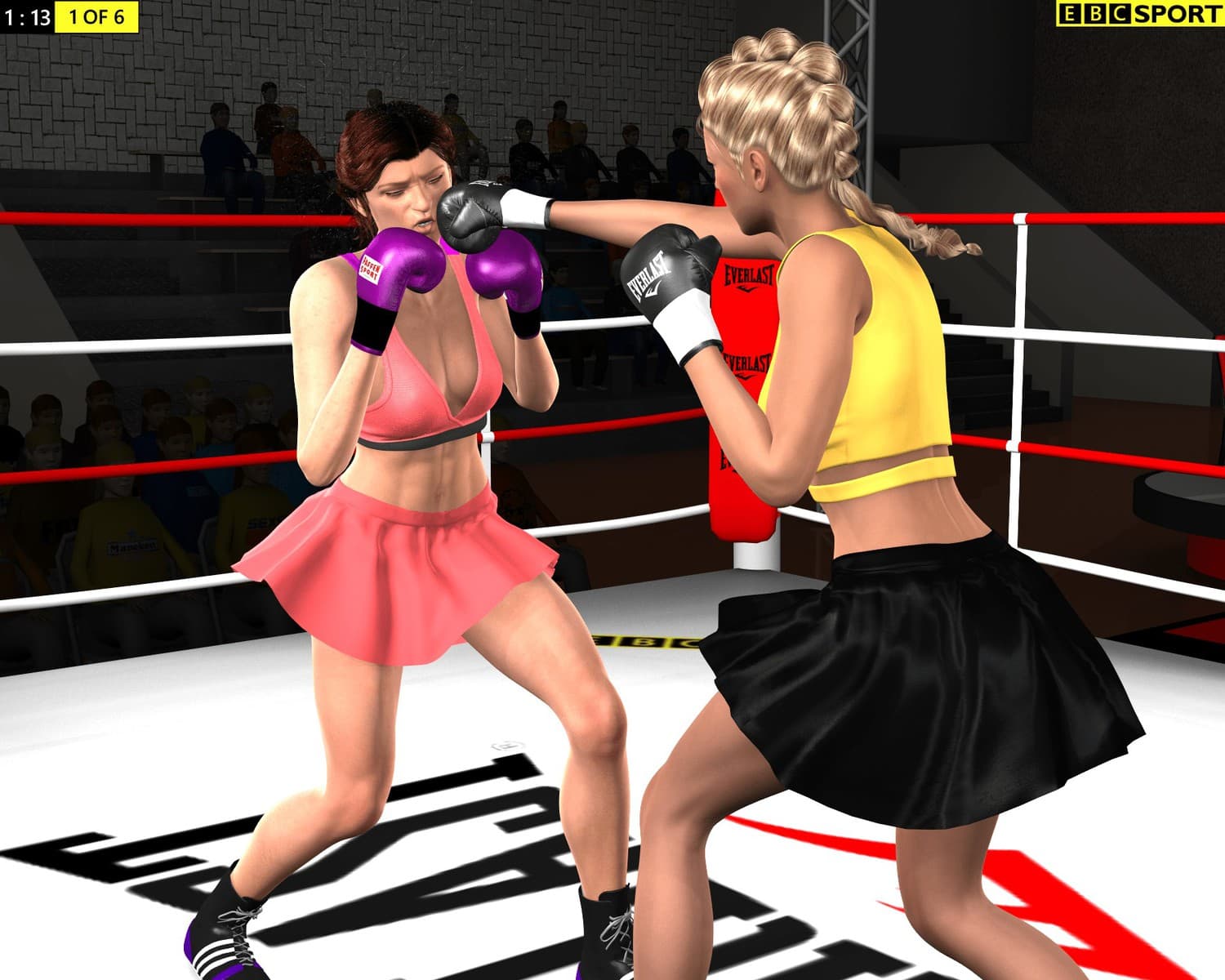 Commentator: “This one is settling into a pattern, and its a pattern that favors Kayleigh Parsons…but Emma McGale finds a home for her right hand, right up the middle.  It’s not a knockout blow, but it might knock back Kayleigh’s confidence.”

Virani: While the commentator hypes up the ‘comeback’ I know Kayleigh well enough to know that this punch was more of an annoyance than anything.  Emma needs to land combinations if she hopes to have any effect on this fight. 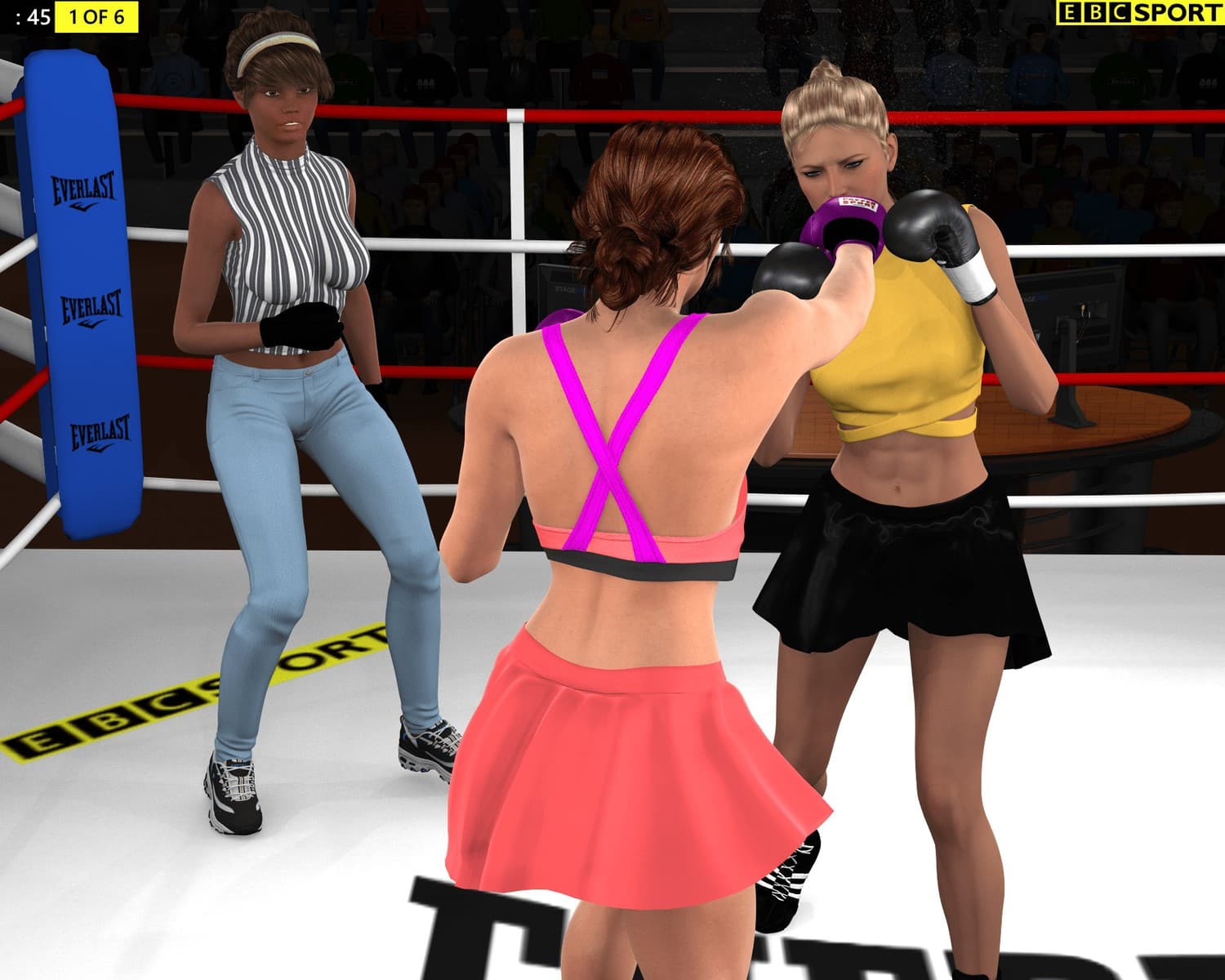 Commentator: “Parsons has done a masterful job of keeping Emma just out of range as she leans away from Emma’s jab.  Emma has to do a better job of following up on her jab.  Yes, she risks walking into a counter, but Kayleigh Parsons is too smooth to be caught by single jabs like this.”

Virani: It’s annoying to watch a fighter make such obvious mistakes.  I’m not going to learn anything about Kayleigh when she is fighting against this level of competition.  Maybe I’m being too harsh.  Emma is certainly out there trying.  That’s better than some. 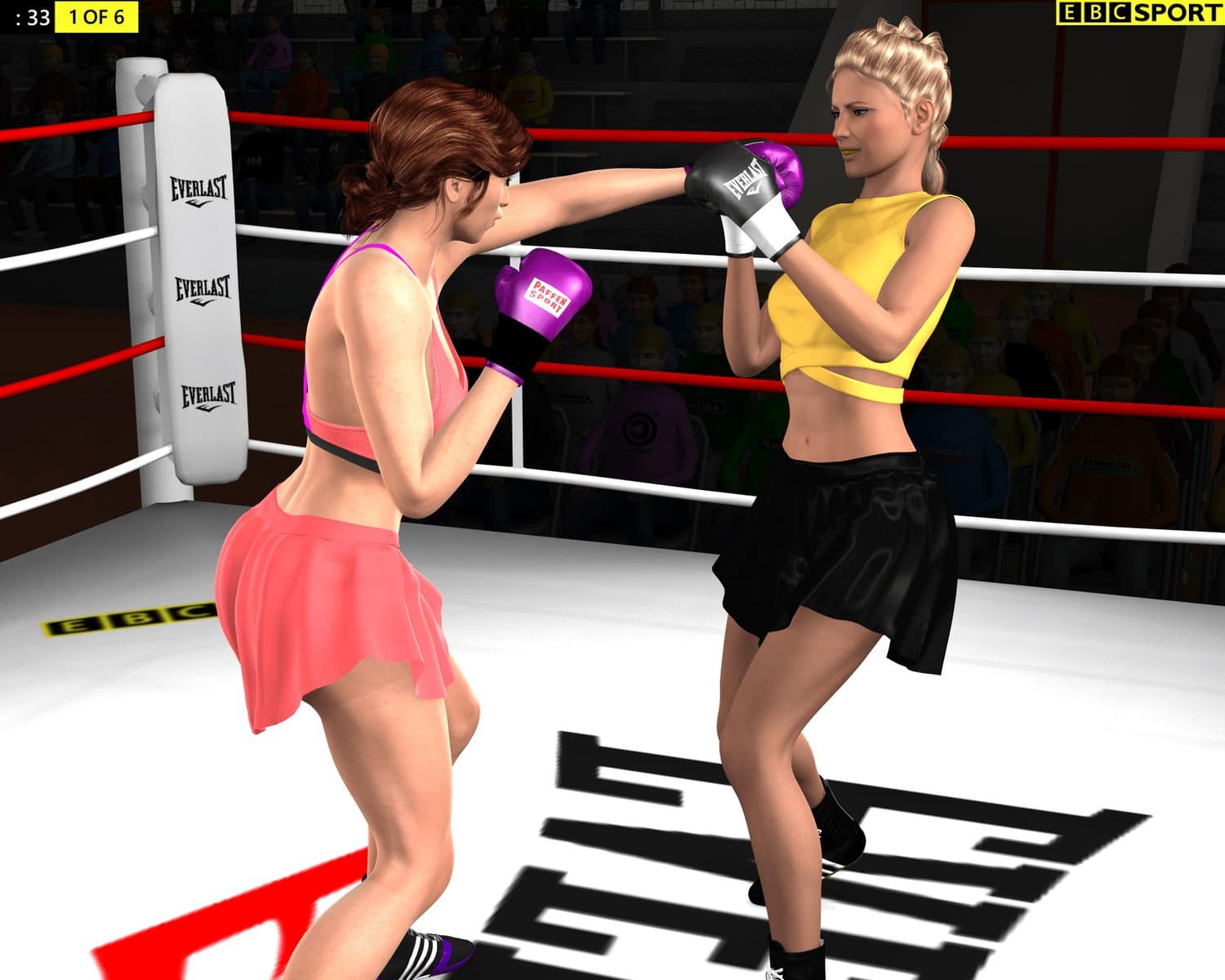 Commentator: “This has been a bit of a slow round, though ‘The Fluke’ has been almost completely in control.  And now she sideslips a lazy jab and scores with a sharp uppercut that hurts Emma McGale!  It was a peach of a punch from Kayleigh Parsons and Emma now looking to cover up and survive the round!”

Virani: Now that was some skill from Kayleigh, to both slip the jab and throw a hurtful uppercut at the same time.  It was a bad jab from Emma, no question, but still, Kayleigh had to have the speed and confidence to pull off the move. 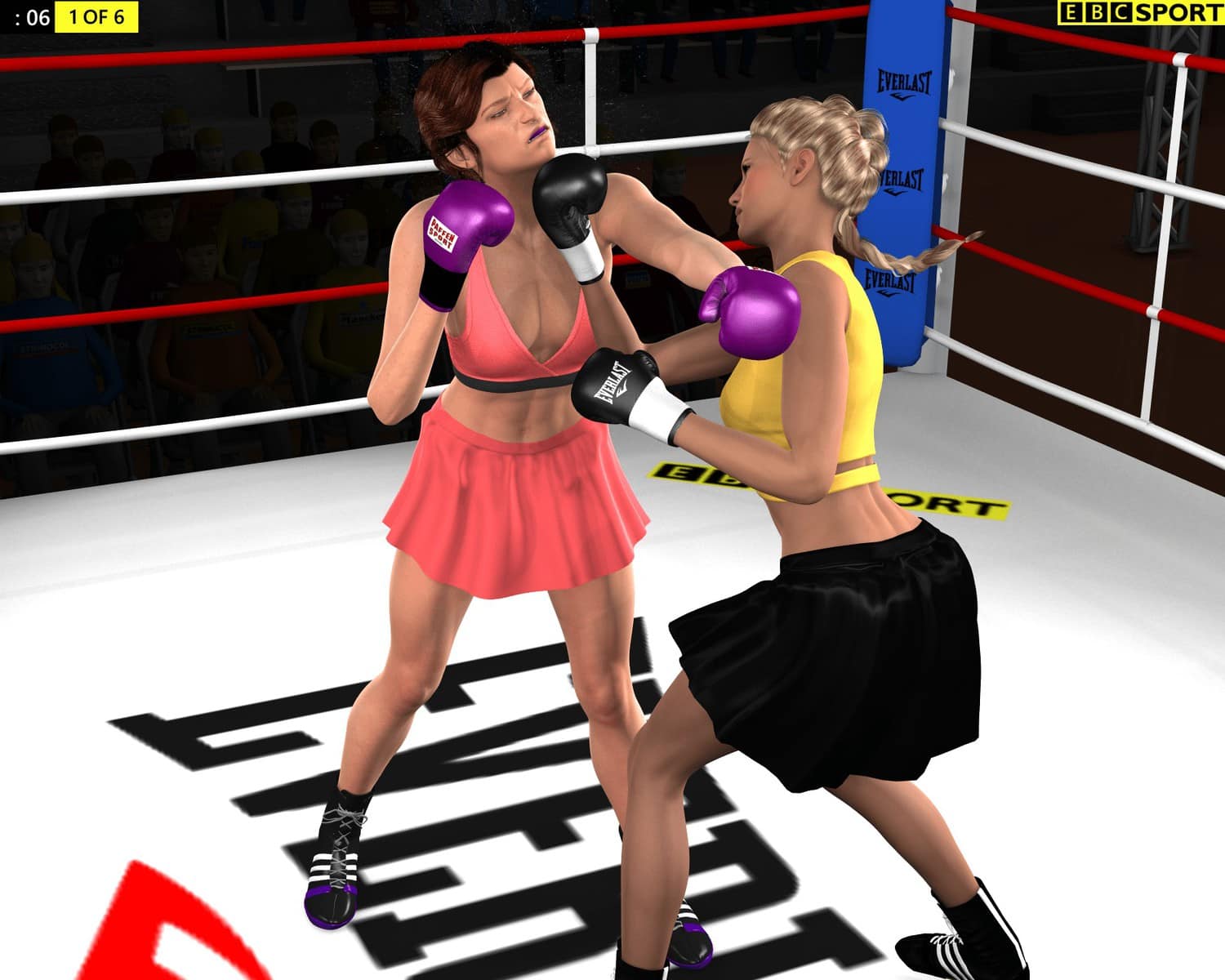 Commentator: “McGale is in a spot of trouble as the end of this round approaches.  She turtles, hoping to just survive the round, and while Kayleigh Parsons drives a wicked hook into her midsection, she will manage to do just that.  An exclamation point to a dominant round for ‘The Fluke.’

Virani: Kayleigh’s punches must have some snap on them, because Emma immediately went into turtle mode as soon as that uppercut landed.  That’s not the sort of defence that will survive long against Kayleigh, and she shows her veteran calm by picking a single good punch, rather than swinging wildly away, hoping to get through with a haymaker or two.  There’s a lesson for me in there.

Commentator: “An easy 10-9 round for Kayleigh Parsons, who will remain standing during the break as she gets instructions from her husband, ‘Fireball’ Jim Parsons.  You’d have to think the instruction will be for more of the same,

Meanwhile, Emma McGale looks a little worried in her corner, and its not hard to see why.”

Jim: “Okay, you’ve got her measure, put on some more pressure in this round.  Don’t get crazy, don’t get stupid.  Controlled aggression.”

Kayleigh thinks: This Emma girl isn’t on my level, but I still have to go out there and do a professional job.  I don’t want to underestimate her like I did with Virani after the first round.  I’m going to keep, calm, and focused, and think only about beating Emma McGale.

Virani: Kayleigh looks like she’s out for a morning stroll.  This fight is going exactly to plan for her.  Emma’s corner is telling her to attack and follow up off her jab.  That might help…if she could land her jab. 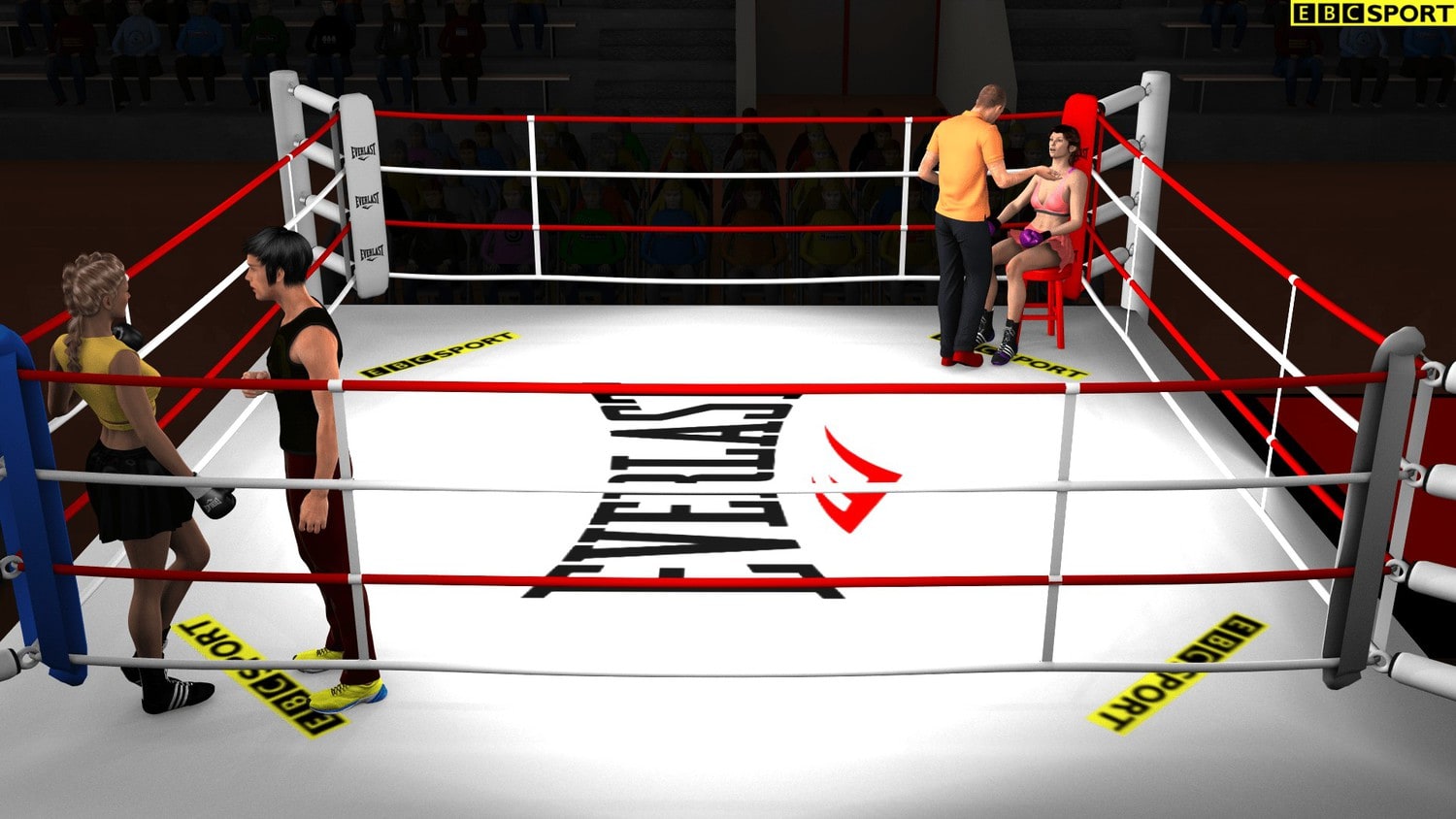