Commentator: “Emma McGale comes out at the start of the round and immediately fires off a vicious looking 1-2.  Kayleigh Parsons was up to the task though, showing very good head and body movement.  McGale is boxing reasonably well, but Parsons is just better.”

Virani: I feel my anger towards the commentator growing.  ‘McGale is boxing well’ – Because she missed with a 1-2 combination?  Jesus, I know the commentator likes to hype the home fighter, but that was rediculous.  Kayleigh certainly is putting on a clinic though. 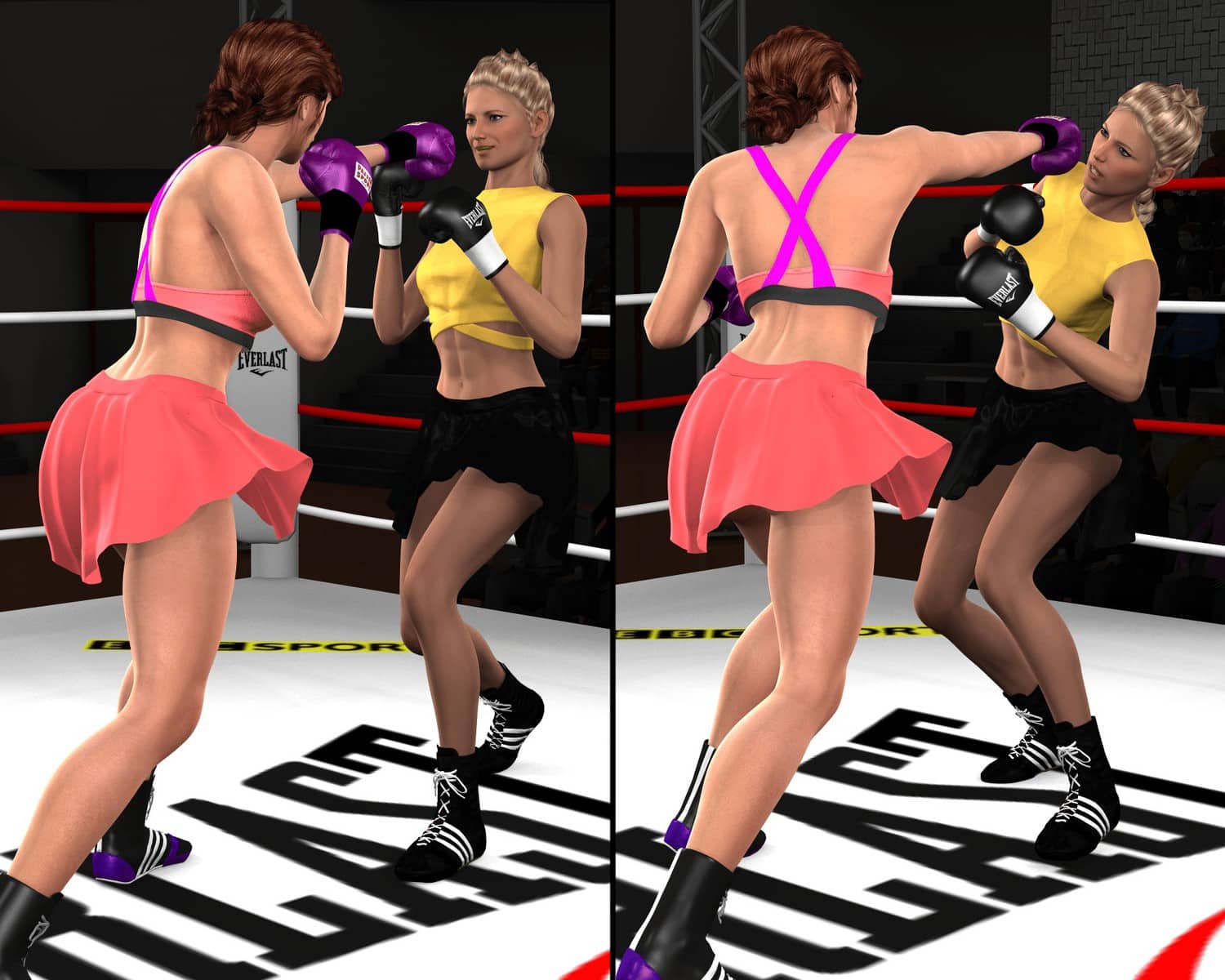 Commentator: “Kayleigh Parsons establishes the jab, snapping it through Emma’s guard.  Kayleigh isn’t afraid to throw to the head or the body and that is keeping Emma from reacting perfectly to incoming punches.”

Virani: Hmmm…. I can see what this fight is going.  Emma doesn’t have the skills to hang with Kayleigh. 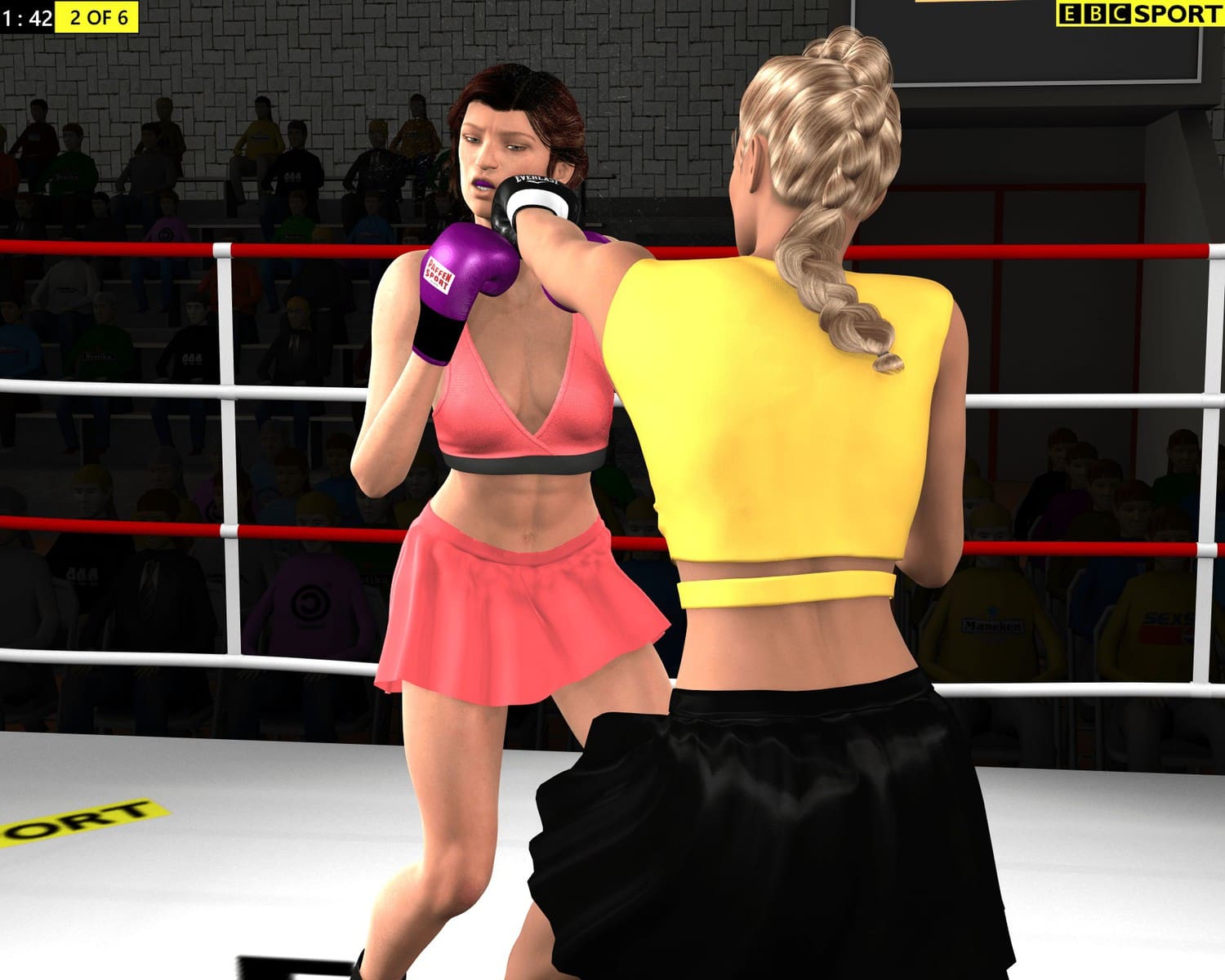 Commentator: “Parsons starts to turn up the heat, pressuring Emma.  Now she feints and lands a nice right hand over the top of Emma’s guard.  That feint froze her just long enough for Kayleigh to score with her punch.

Virani: What the hell are you even doing, Emma?  Did no one teach her how to defend herself?  Awful.  I mean I don’t have great defence either, but jeez. 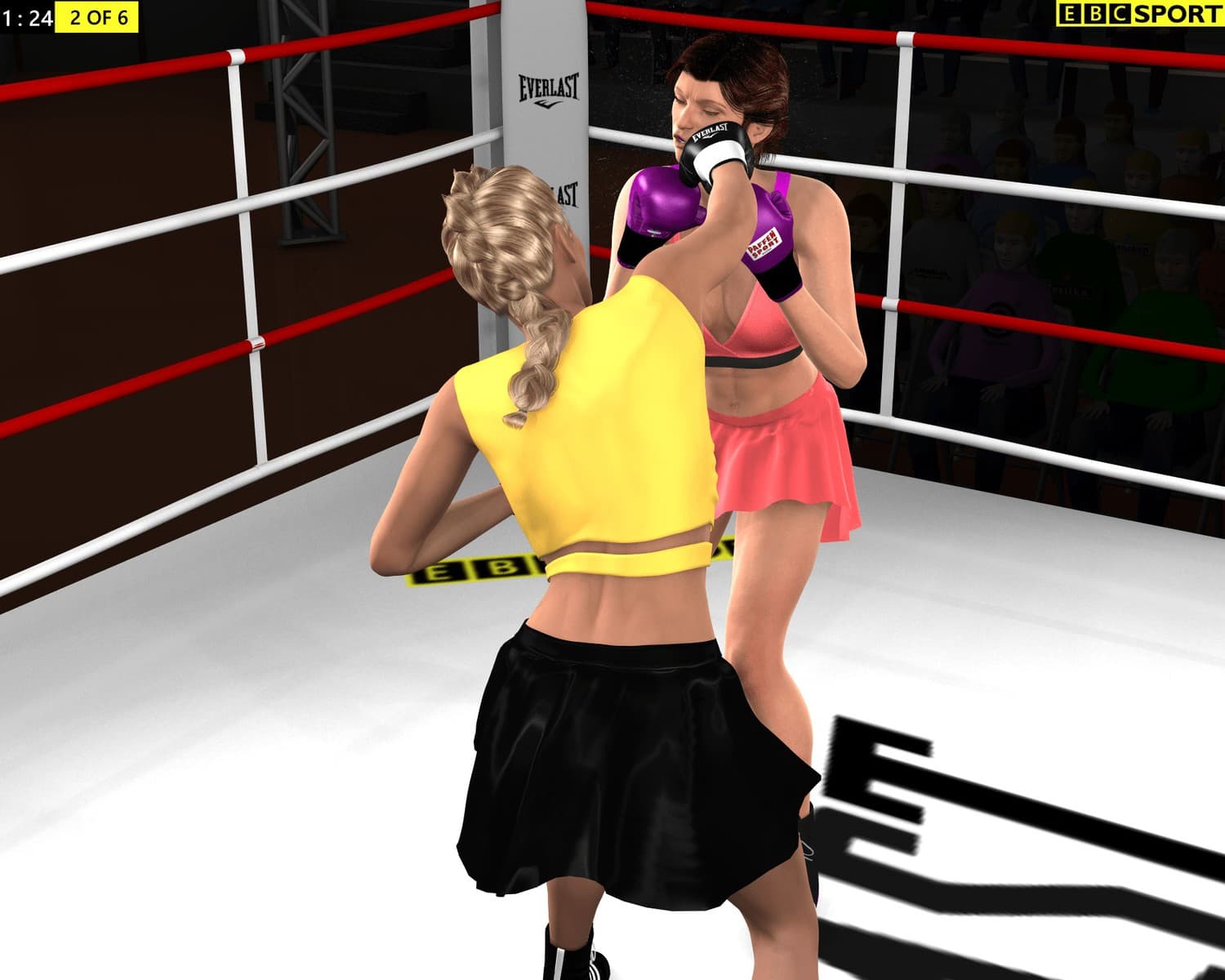 Commentator: “Emma looks a bit unsteady at the moment..and Kayleigh guides her into the ropes and pops her with a good left hook to the body.  Very nice boxing from Parsons.”

Virani: Emma shows the ring awareness of a groundhog, if that groundhog was both bllind and drunk.  She let Kayleigh herd her into the ropes way too easily.  The ropes are not your friend, girl!  And Kayleigh makes her pay, hitting her with a good left to the body that buckles her knees for a moment.  If I was to critique Kayleigh, I’d say that should have tried to go for the left hook to the liver instead of the midsection. 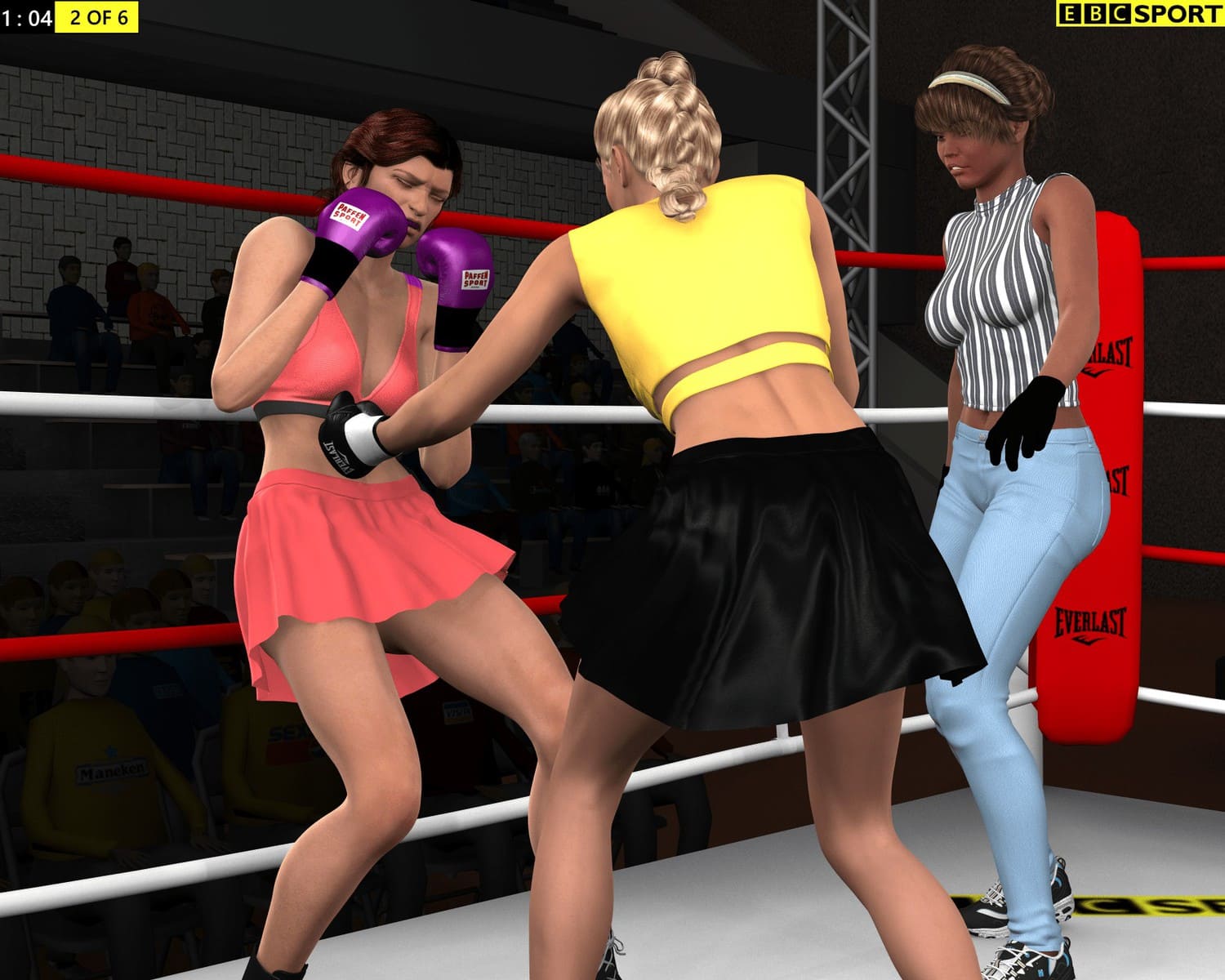 Commentator: “Parsons swings…and misses with a huge haymaker of an uppercut!  That was ‘The Fluke’ going for the victory with one punch – Emma McGale will be glad that her chin was not on the receiving end of that one… 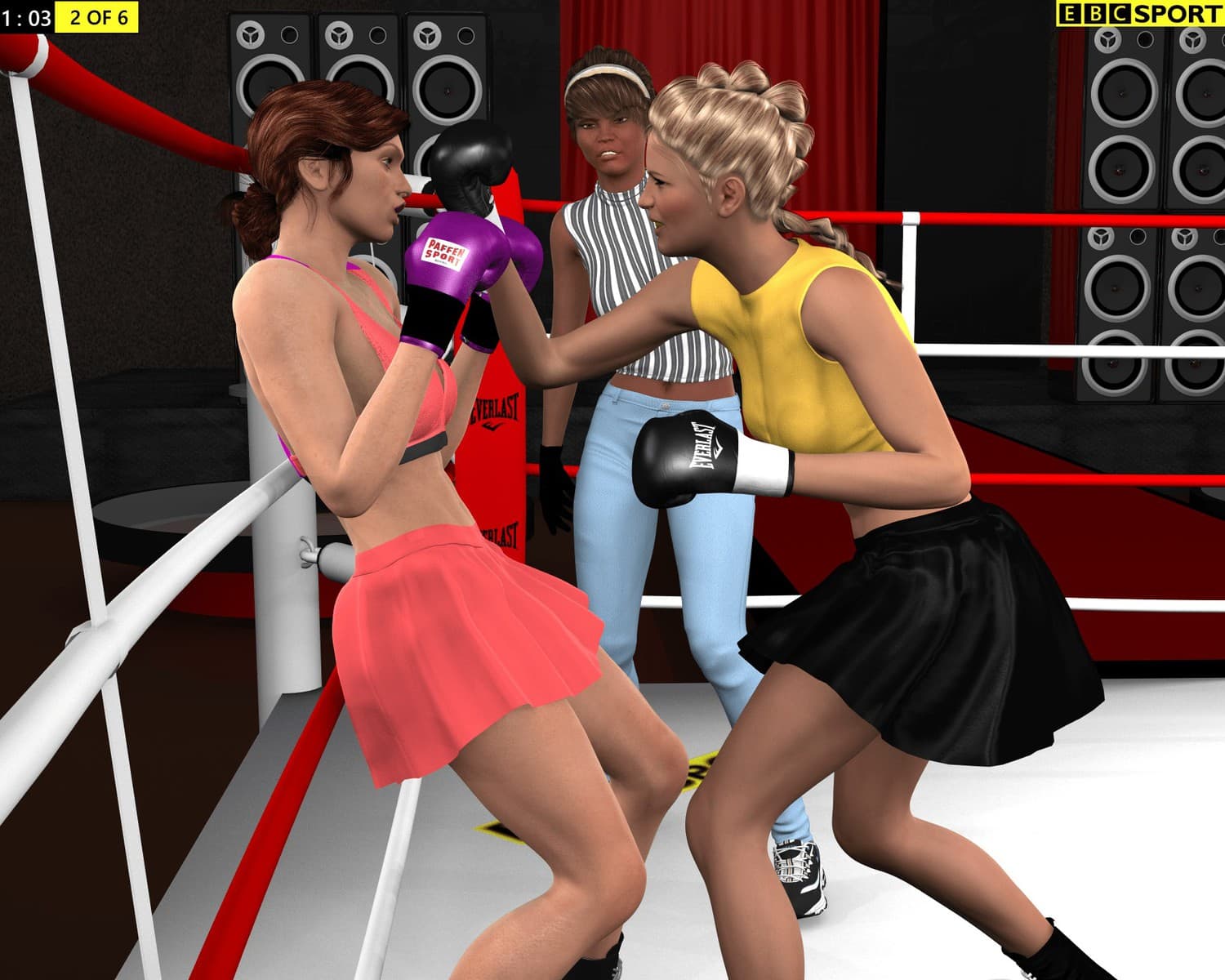 Commentator: “Emma DeGale throws herself into a clinch to slow things down.  She cannot be happy with the way this round has been going.  Clarissa Starling, our referee is quickly in there to break up the clinch.”

Virani: Good time to clinch for Emma.  She needs to get off the ropes, and she’d probably like to slow the pace of this fight down a little.  That’s one thing that a clinch does, it breaks the flow of the fight for a moment.  I’m not sure what Emma can do to really get in this fight – she’s having trouble landing her punches and she’s not elusive enough to make Kayleigh miss.  She’s just got to hope that one of her punches clips Kayleigh and hurts her. 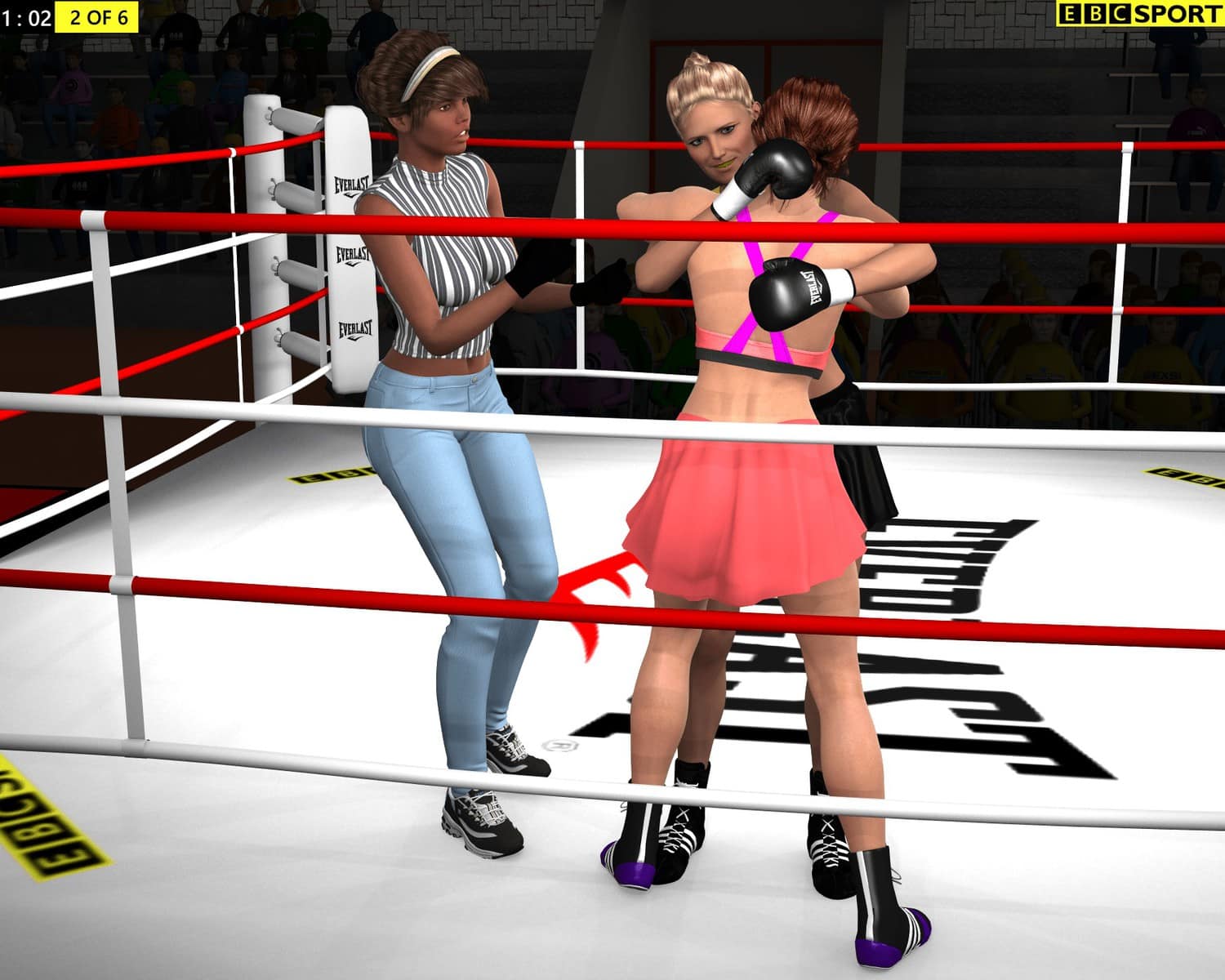 Commentator: “Parsons has been particularly sharp in this one, especially with her counters.  And we see evidence of that again as she sees a left hook coming from Emma and smacks her with a clean straight right.  Kayleigh’s speed and anticipation have been outstanding in this bout.”

Virani: I’ve kinda been impressed by Emma.  I don’t think she’s going to win this fight, but I don’t think she’s been particularly bad either.  She just has moments where she gets sloppy – like now when she tries to throw a left hook – she doesn’t have the angle to throw this punch, she’s just opening her body right in front of Kayleigh, so of course Kayleigh hits her with a clean right hand.  It’s what any decent boxer would do.  And Kayleigh is way better than decent. 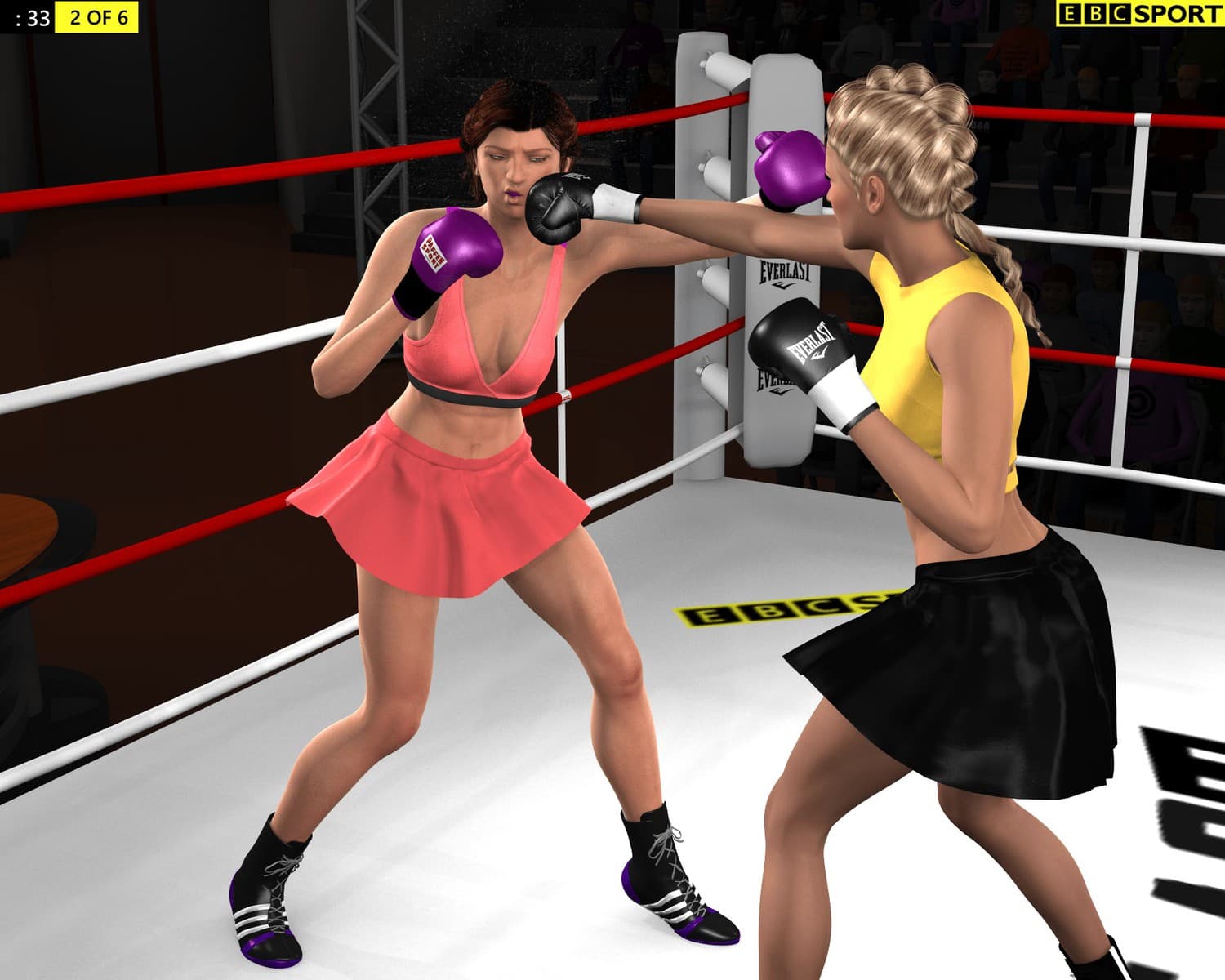 Commentator: “This round is drawing to a close, and it has been Parsons completely…but there’s a sharp right hand from Emma McGale!  Kayleigh seems to be a bit shaken by that one….maybe Emma will have a chance to put her mark on this round!”

Virani: Oh good, it’s a sign of life from Emma.  I’m kind of cheering for her to be honest.  Kayleigh got a bit lazy and Emma spotted the opening.  It was a good punch from Emma too…it probably won’t do much more than piss Kayleigh off, but…it’s something.  The commentator is acting like Kayleigh got hurt by that punch…I don’t believe that for a second.  Kayleigh just backed away after the punch landed to get distance.  Nothing more than that. 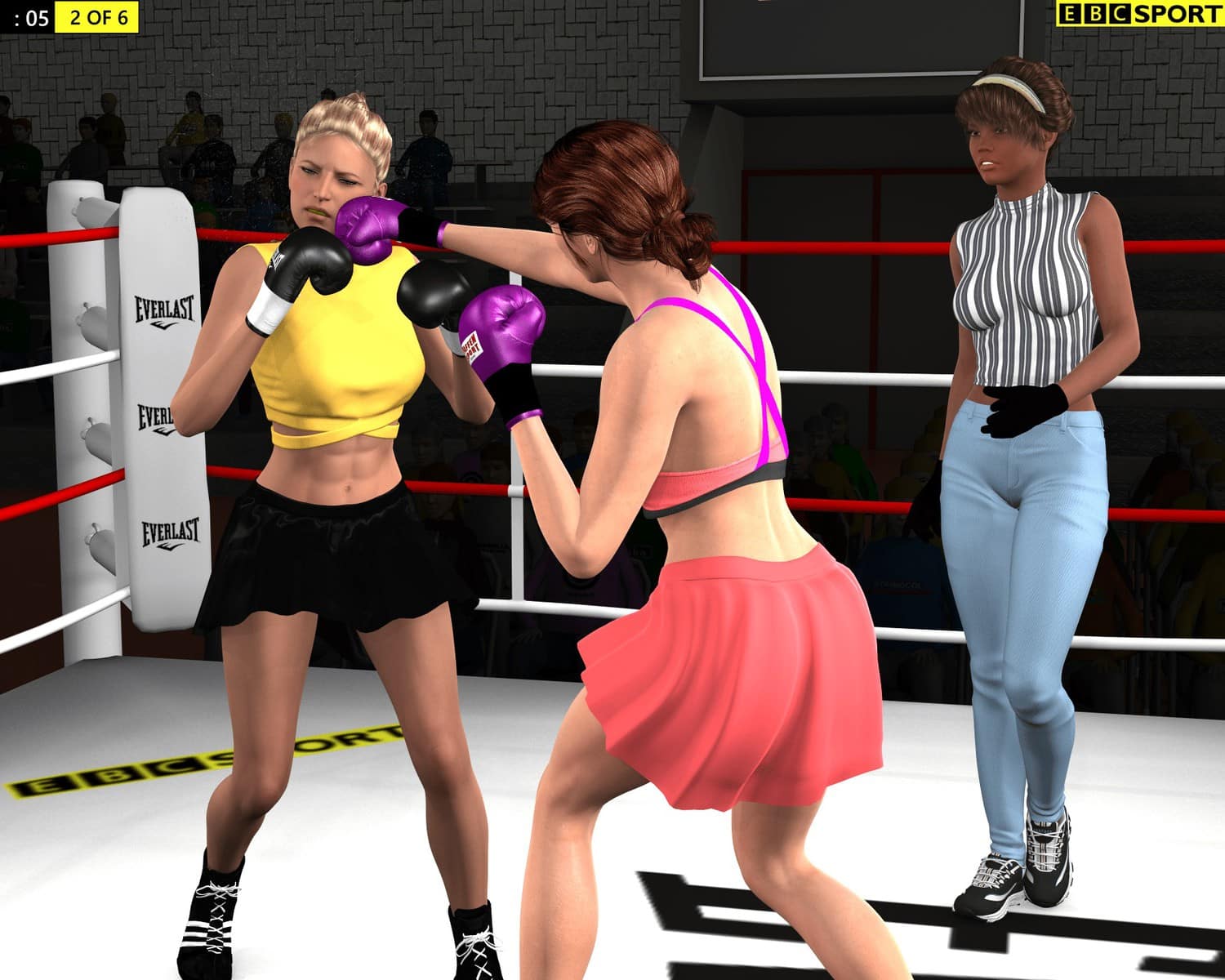 Commentator: “Parsons seems to be a bit shaken!  Emma McGale corners Parsons…and she…gets caught by a big left hook!  Everyone in the arena heard that one, and I think McGale’s mouthpiece ended up in row Z!  McGale stays on her feet and survives the round as Kayleigh Parsons leaves no doubt about who won that round!  McGale seems a bit slow to go to her corner…her confidence seems damaged.”

Virani: It’s like watching a trainwreck that you know is coming.  Emma rushes forwards to try to pursue her ‘hurt’ opponent.  Kayleigh coyly gives ground, waiting for that perfect moment to strike.  Emma knows that the round is nearly over, so she has to try something to win this round and get the momentum on her side.  So she leaps into a punch, ignoring her defence.  Which is exactly what Kayleigh wants.  As soon as she sees Emma over-commit, she’s moving, getting her body behind a smashing left hook.  Emma’s mouthguard flies out of her mouth, and I’m surprised that her head doesn’t fly along with it.  Emma staggers, clearly hurt, but able to survive the rest of the round.

A masterclass in tactics from Kayliegh.  She lures her opponent into making a mistake and then strikes.  The only thing that Kayleigh did wrong, is that she didn’t quite hit Emma in the right place.  Other than that, perfect. 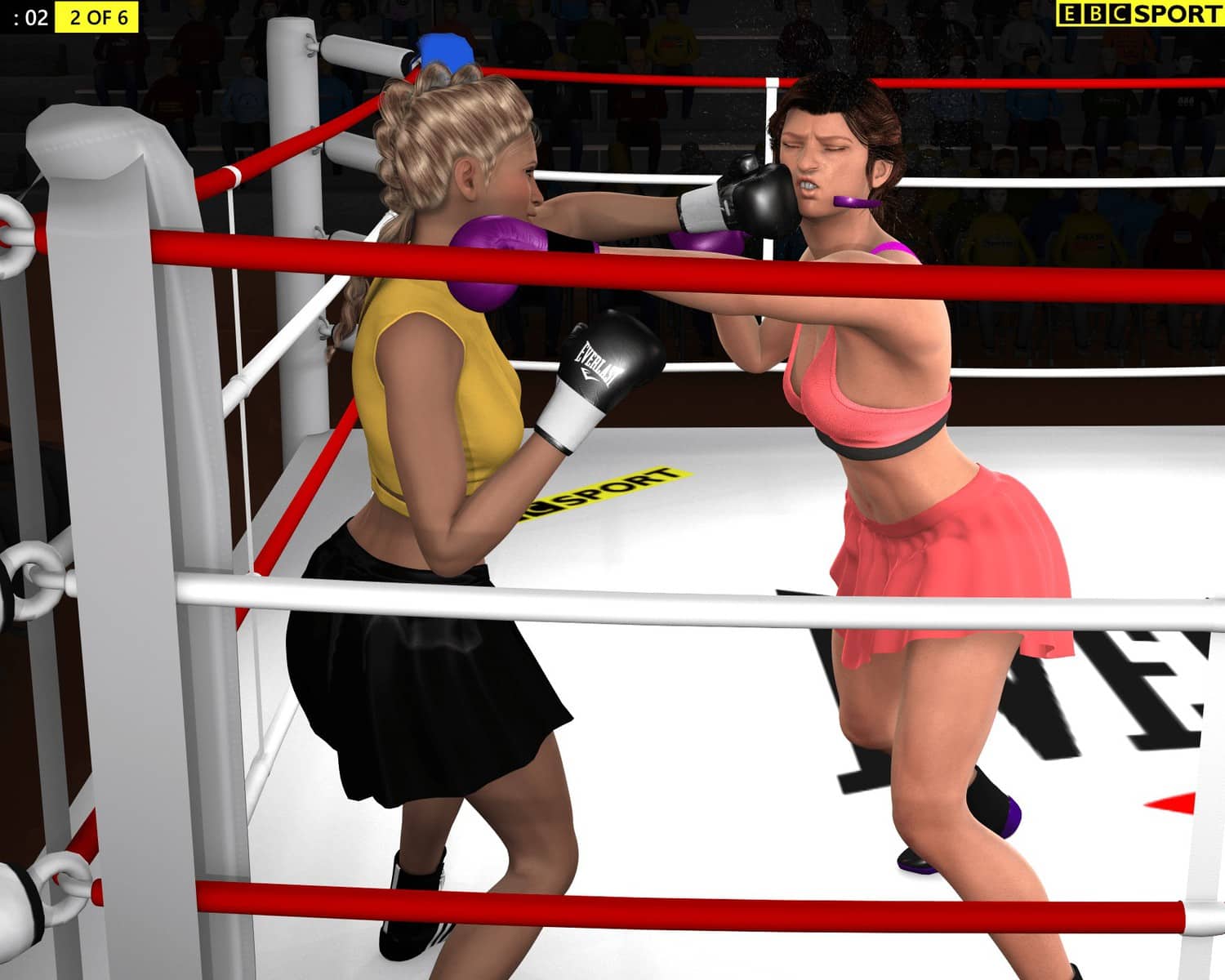 Commentator: “Another round in the books for Kayleigh Parsons.  The former amateur standout is showing off the skills that allowed her to qualify for the London Olympics.  The only thing that would make this performance better is if she was able to get a stoppage.”

Kayleigh: “I hurt her with that last hook.  How did she look walking back to the corner?”

Jim: “She didn’t wobble or anything. The starch is going out of her though.  I think you can take her out this round.”

Kayleigh: “I won’t get stupid, but I’ll see if I can hurt her early in the round and put her away.”

Virani: Kayleigh is dominant and she landed her best punch of the fight near the end of the last round.  She’s got the measure of her opponent now, and I think she might be looking to finish this fight sooner rather than later.  Emma looks defeated.  She started off the fight by trying to be aggressive, but her aggression has not come to anything.  She knows that she’s out of her league.  She might be looking for a way out.

Emma thinks: I am way out of my league here.  I only got 6 days notice for this fight, and I can barely hit this Kayleigh chick.  I didn’t want to take this fight, but my manager talked me into this fight, and I got stars in my eyes about the idea of being on TV.  My coach is telling me that I’m doing good.  I want to know what fight he is watching as it is clearly not this one!

I’m still a bit dizzy from that left hook Kayleigh caught me with.  Bloody hell, I did not get paid enough to take this fight. As the bell rings for the 3rd round, I consider staying on my stool and quitting before coaxing myself into getting to my feet.  It feels like I already lost though.  All I’m waiting for is the official announcement. 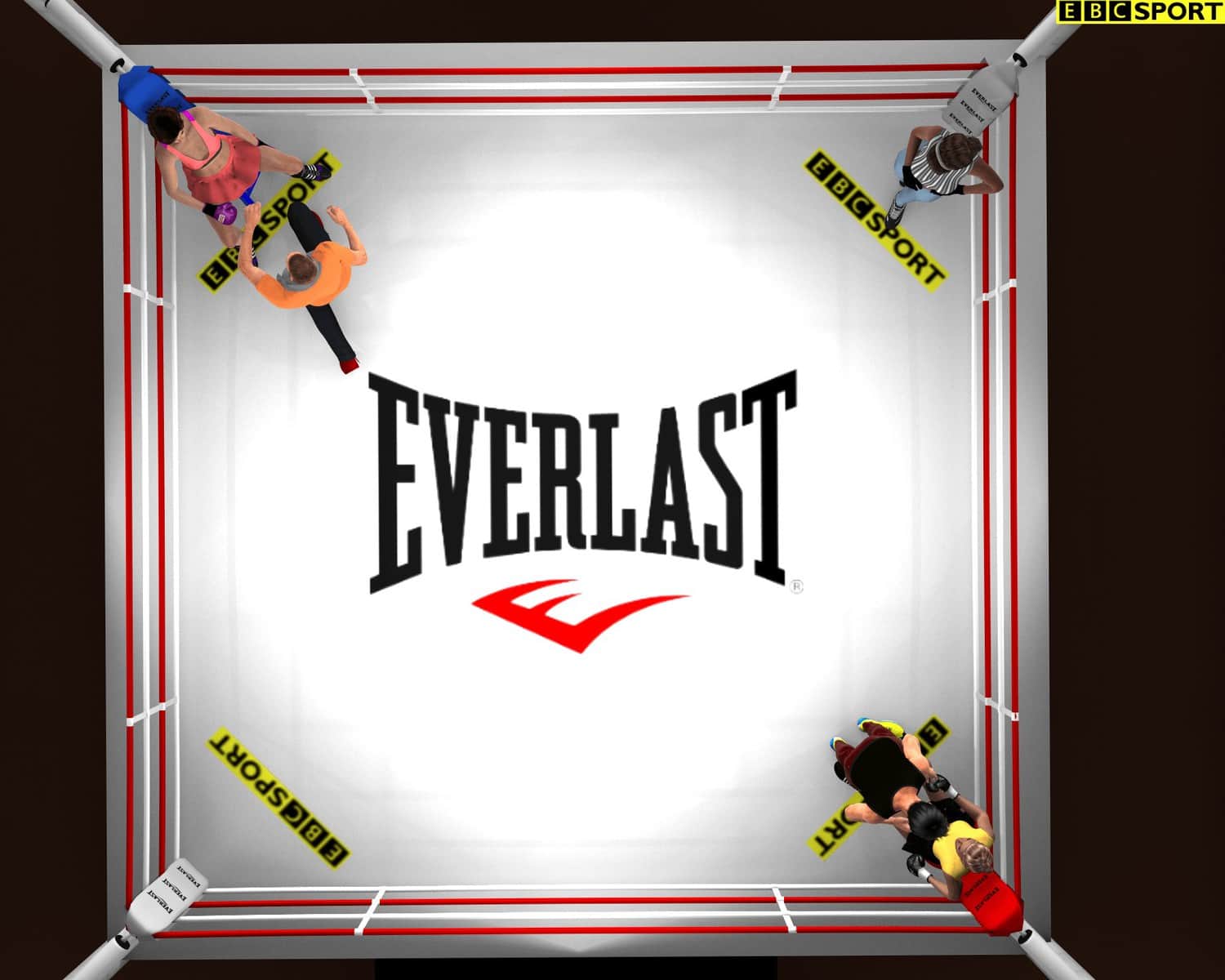 Kayleigh Parsons vs. Emma McGale – Round 1 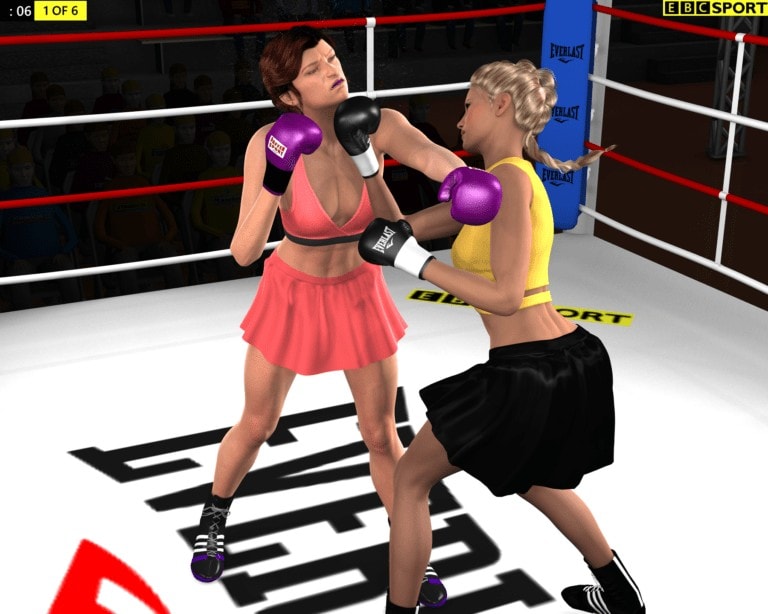 Kayleigh Parsons vs. Emma McGale – Round 3 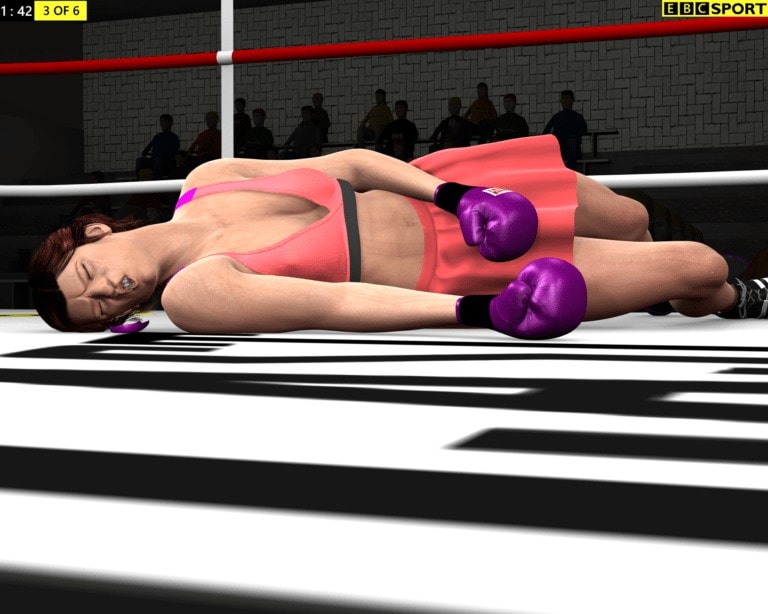