Commentator: “The third round starts out calmly…but there is a wicked 1-2 from Kayleigh Parsons! Emma McGale seems to be staggered by that one! That was a wicked right hand from Kayleigh and Emma is hurt very early in the 3rd round! ‘The Fluke’ stalks her prey, looking for more opportunities to do damage.”

Virani: Damn, that was a wicked combination. I don’t even think I can criticize Emma for not defending herself. It was just an amazingly fast combination from Kayleigh. I can see that Emma is hurt, and I suspect that this is the beginning of the end in this one.

Commentator: “McGale looks a bit wobbly, and her defence is a bit ragged…now Kayleigh gets her with a nice left hook! McGale felt that one and staggers into the ropes! Parsons will be looking for the finish!”

Virani: Kayleigh is one of those fighters that doesn’t really have a best punch because she’s so well rounded. If you had to pick though, it might be her left hook. And she landed a beauty of one on an already slightly wobbly Emma. Poor Emma is hurt. And that look in her eyes says ‘get me out of here!’ I sympathize.

Emma thinks: That right hand wobbled me…I can feel my legs go rubbery…I try to get my hands up to protect myself but they don’t respond the way they should. At the last second I see a left hand coming. It smashes into my jaw and my wooziness only increases. I stagger away and fall into the ropes…Ungh…I’m hurt pretty bad here… 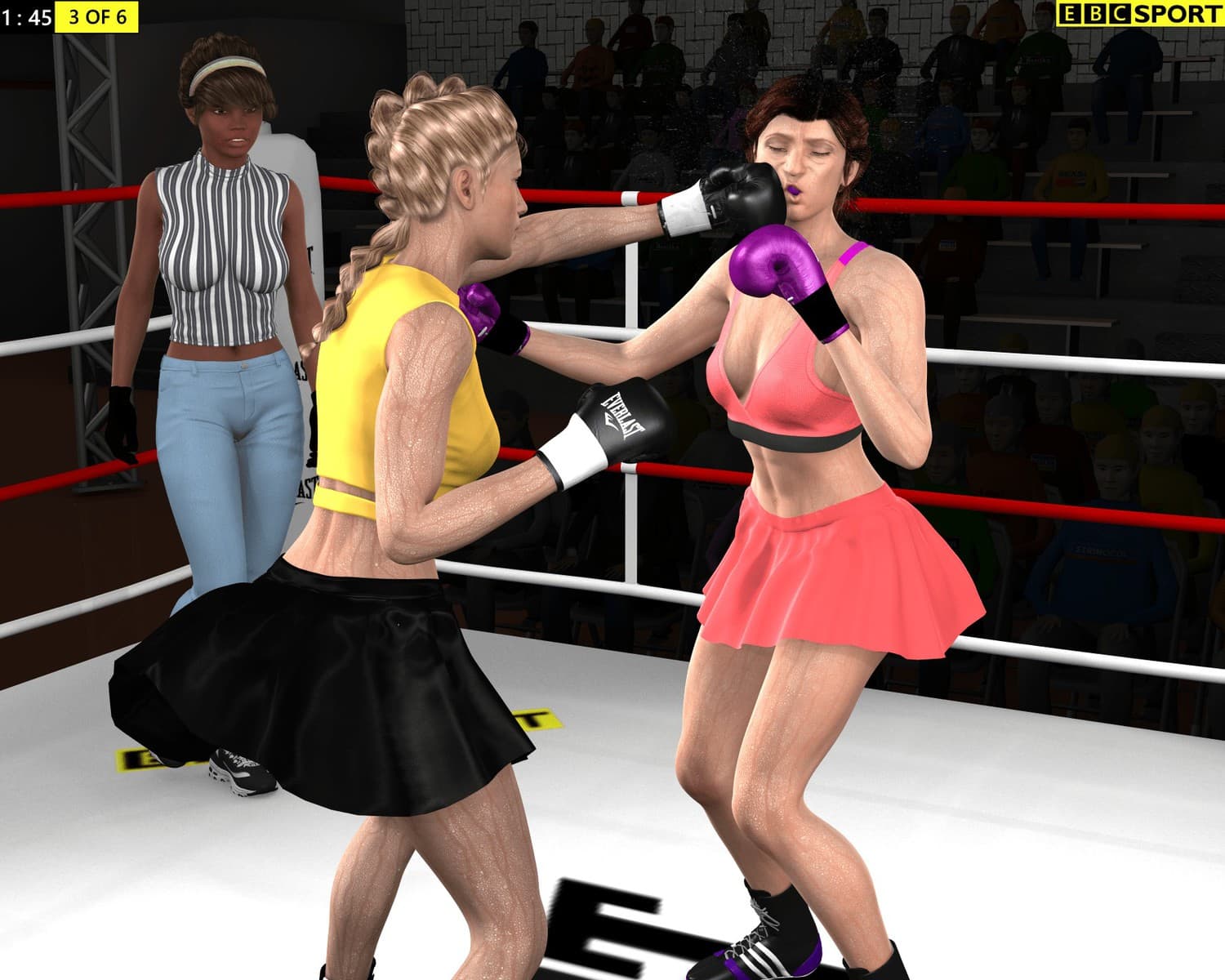 Commentator: “The crowd noise rises as they sense that this fight may be coming to a sudden end. Emma McGale sways out of the way of a few punches, but then Kayleigh squares up and nails her with a straight right hand to the body. Parsons was trying to punch right through McGale with that one, and the sound it made just reverberated around the arena…

Virani: Oof. Wicked body shot from Kayleigh. She put her whole body behind that one. I think that might be the end. Emma’s face tells the whole story.

Kayleigh thinks: Alright, I got this bird hurt, now time to put her out to pasture. She sways on the ropes for a bit, keeping her upper body hard to hit. Fine then. I put everything into a right hand to the body and it lands with a very satisfying sound. Hm. That might be it.

Emma thinks: I’m hurt, and I’m on the ropes, I’m just trying not to get knocked out. I sway on the ropes, trying to avoid the punches as Kayleigh throws them. But Kayleigh isn’t stupid and she picks her punches well. I keep protecting my head. I don’t even see the right hand to the body coming. I just feel it. It’s like someone detonated a bomb in my innards. My legs go weak… 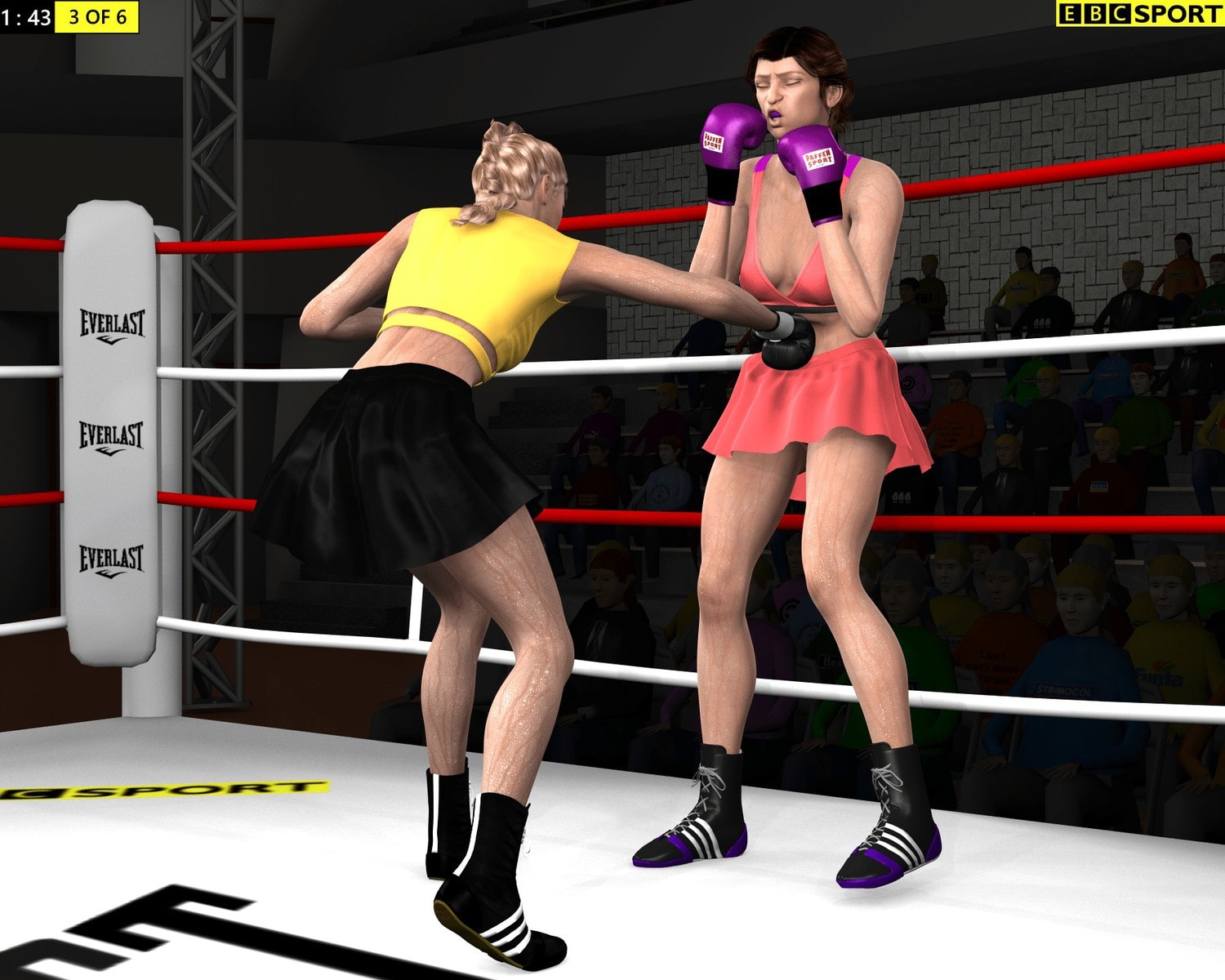 Commentator: “Emma McGale is down! That last shot to the body has sent Emma to the canvas and she looks hurt. Kayleigh Parsons landed a barrage of punches to start the 3rd round and I am not sure if Emma McGale can find her feet in time to beat the count.”

Virani: Nice knockdown from Kayleigh. She can hit reasonably hard when she has a hurt opponent in front of her. I don’t think that Emma will get up. It’s not that she’s been knocked out in the classical sense, its that the fight has been knocked out of her. Maybe Emma will prove me wrong though.

Kayleigh thinks: That girl is not getting up. 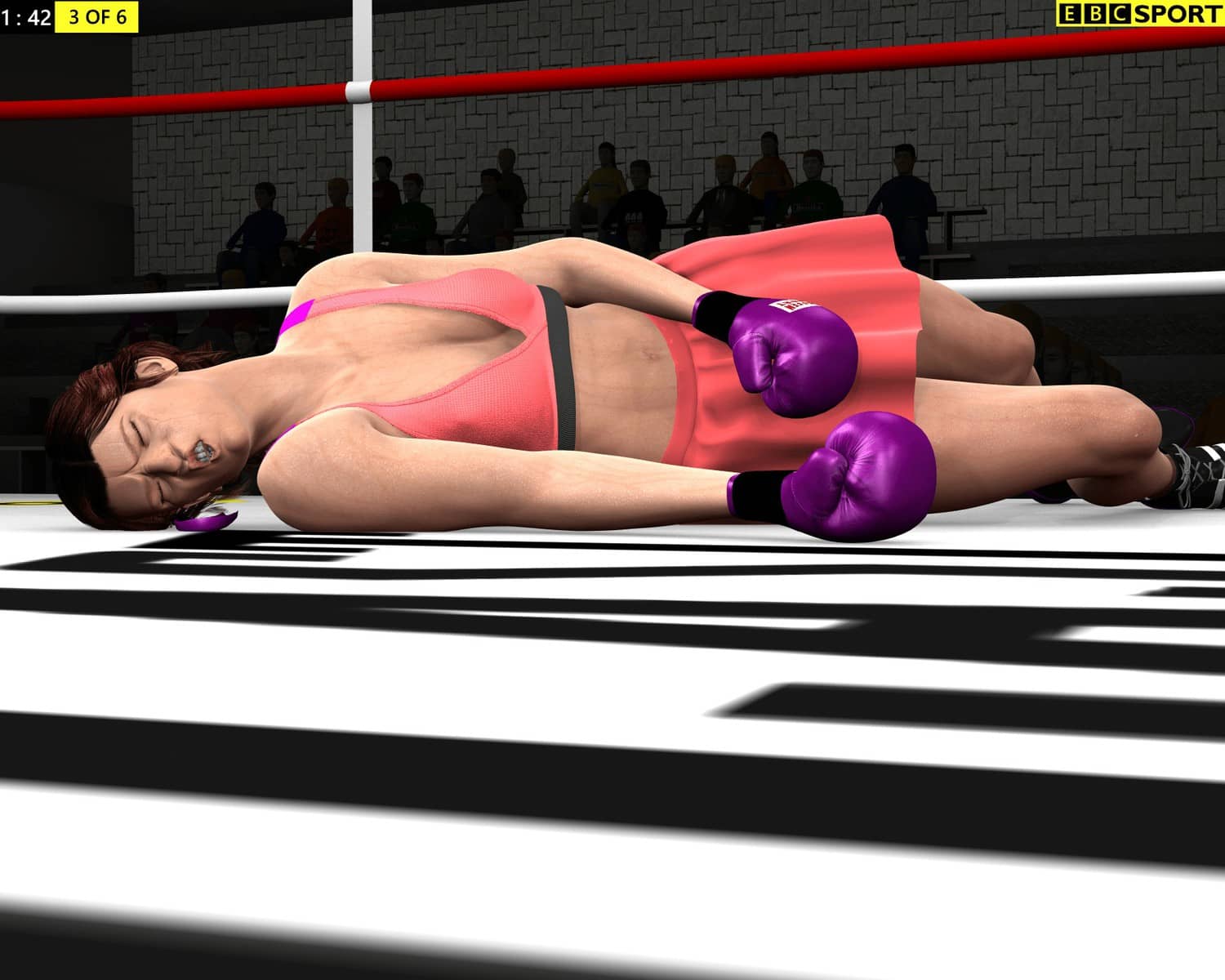 Commentator: “Referee Clarissa Starling’s count gets to 10…Emma McGale has been knocked out in the third round! Emma never made a real attempt to beat the count. A resounding victory for Kayleigh Parsons as she moves her record to 3-0.”

Virani: I’m not exactly surprised that Emma stayed down, though I thought that she would at least get to her knees. She just looks…defeated. She knew that she was outclassed and it was only a matter of time before she got knocked out…she just took the easy way out. I don’t blame her. This wasn’t really a contest, this was just a way to spotlight Kayleigh to a TV audience. At least she didn’t get seriously hurt. In a way, that’s a victory.

And really, Emma was actually pretty decent. Not at Kayleigh’s level, but she had some reasonable skills. Maybe with a better promoter, one that didn’t want to throw her to the wolves so that she could get on TV, maybe she could have done something. Maybe, maybe not. At this point though, she’s 4-4 and will probably never evolve into anything more than a fighter that gets matched up against a prospect that someone wants to make look good.

Boxing is a cruel sport.

Emma thinks: I hear the count progress above me, but getting up is the last thing on my mind. The pain from that body shot that Kayleigh gave me fades slightly, but it still hurts, bad. I roll onto my back and stare up at the referee. Count quicker please. I’m done. I’m not good enough to fight someone like Kayleigh. The ten count is almost a relief. 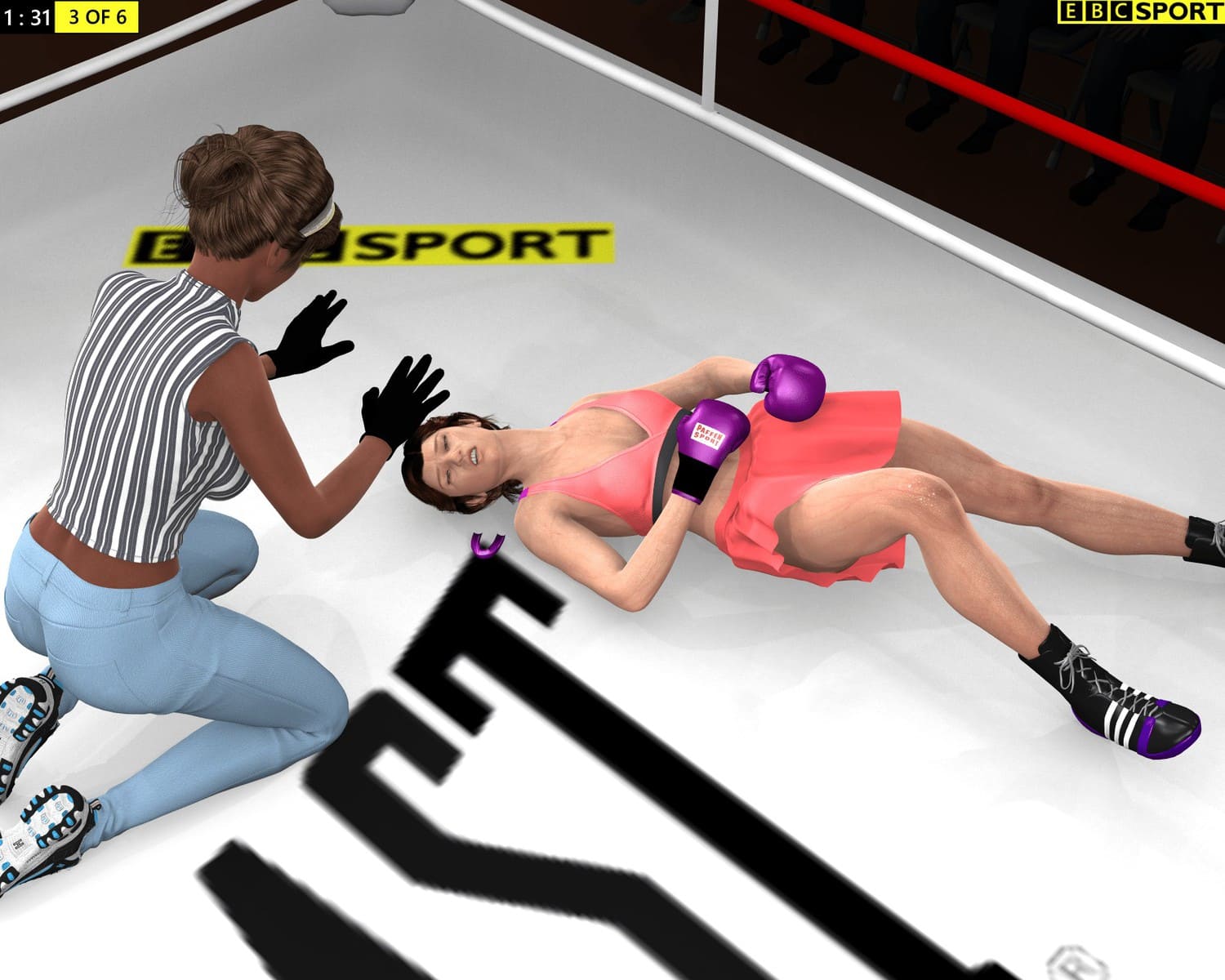 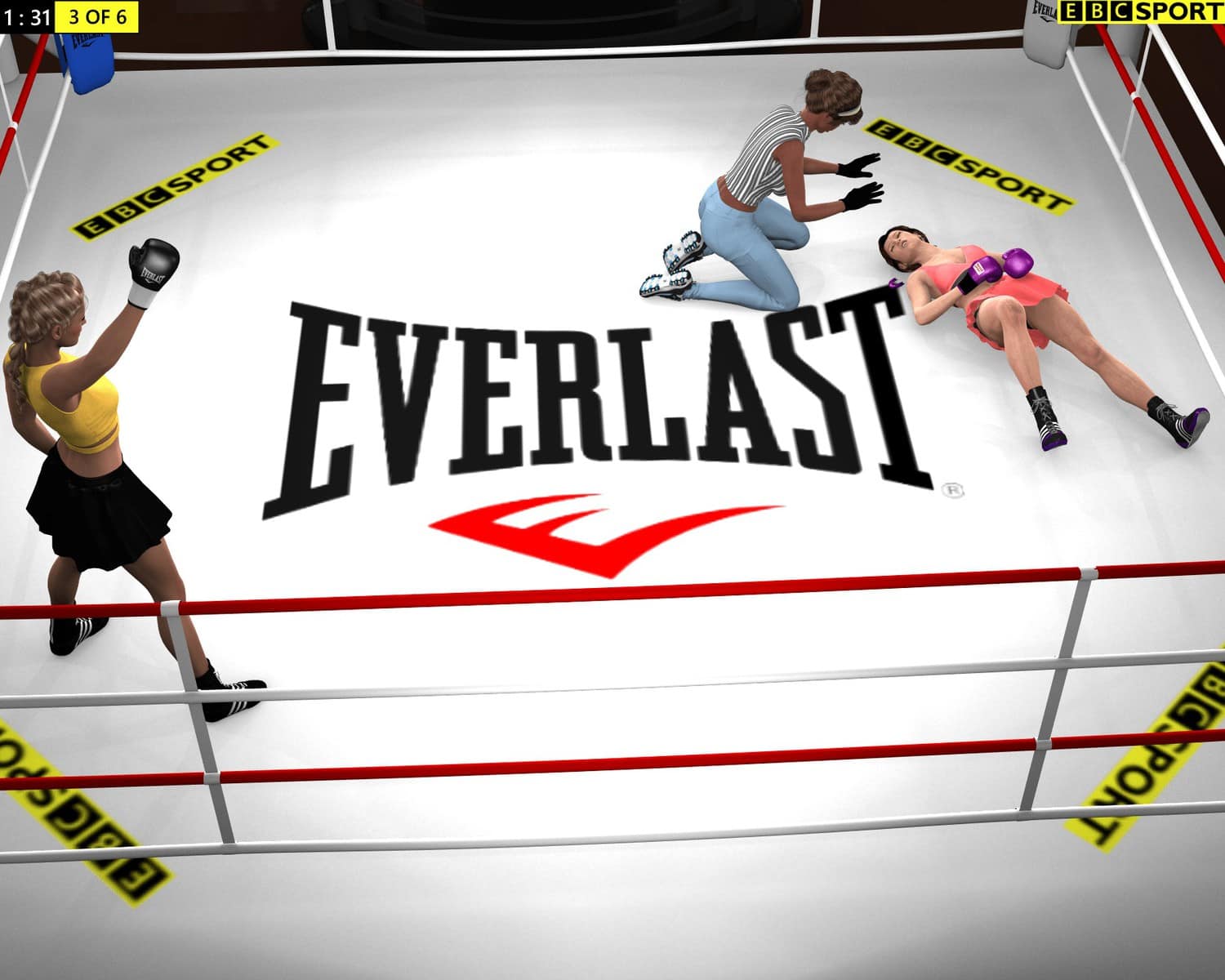 Ring Announcer: “Ladies and Gentleman, this bout comes to an end at 29 seconds of the 3rd round. Your winner, by way of KNOCKOUT, KAYLEIGH ‘THE FLUKE’ PARSONS!”

Virani: Another victory for Kayleigh. She’s now 3-0 with 3 wins by knockout. And while the level of competition was not the best, the way she handled herself in this fight was impressive. She showed off more of the skills that made her a standout in the amateur ranks, and she’s definitely more of a ‘boxer’ than she was when she fought me. Kayleigh doesn’t have the hardest punch, but she knows how to punch, which is sometimes more important. I’m interested in seeing what she does next.

Kayleigh thinks: Nothing better than getting your hand raised at the end of a fight. This Emma girl wasn’t that much of a challenge, but it was good to get out here in front of my fans and remind them how good I am. Not every fight can be for a title. Small steps.

Emma thinks: Is there anything worse than waiting for your opponent to be announced as the winner of a fight? Probably not. The pain in my midsection has mostly faded by now, but its been replaced by a feeling of despair. I wasn’t good enough tonight. I can offer a thousand different excuses, but Kayleigh Parsons beat me up and knocked me out. Simple as that. And it was simple for her. Damn. 4-4 in my professional boxing career. Not exactly promising. Maybe I’ll give it one more roll of the dice. But I’m changing my coach and manager. Those people have not set me up for success. I need a change of scenery. 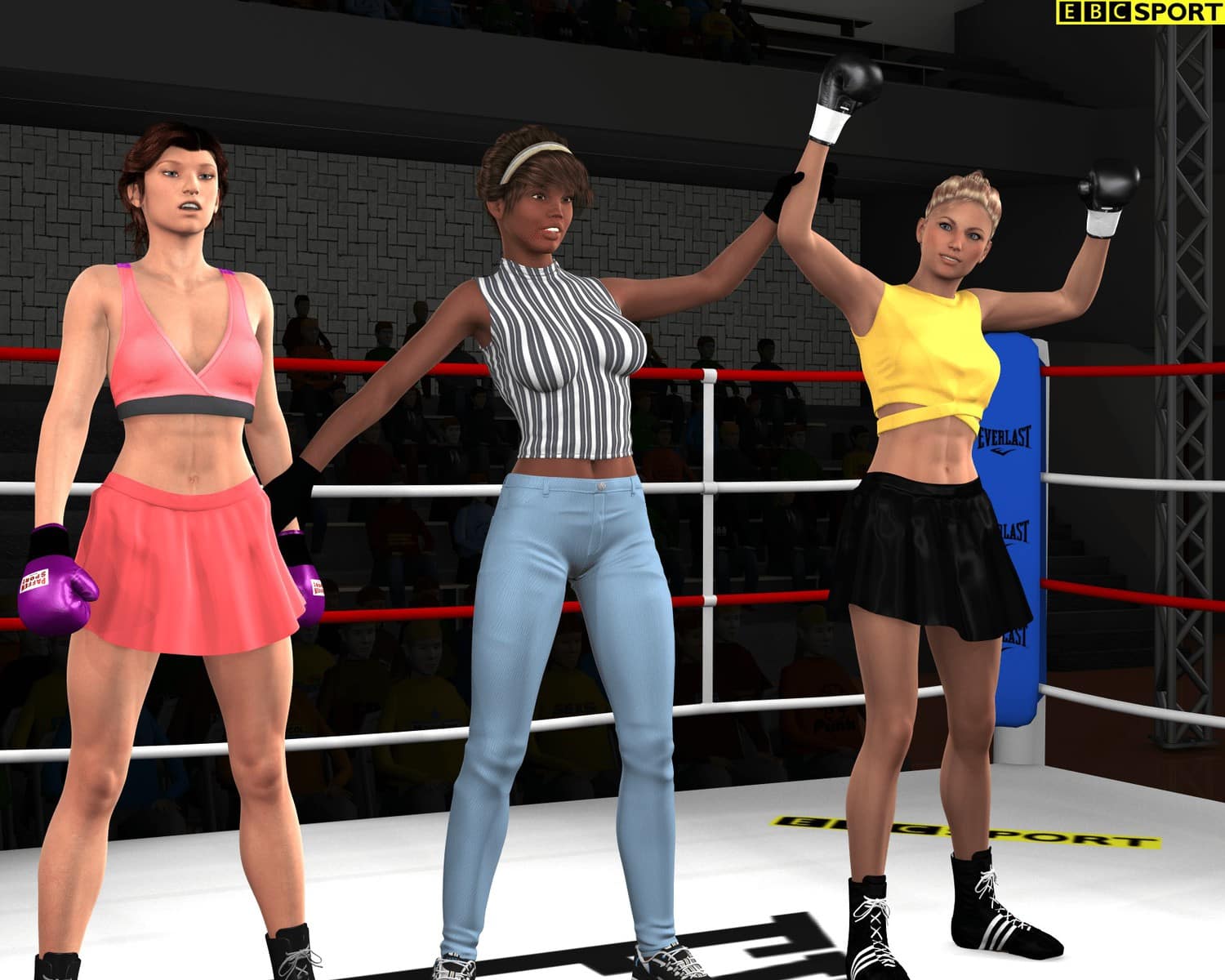 Commentator: “And now for some closing thoughts on this bout, we’ll hand things over to tonight’s winner, Kayleigh Parsons.”

Kayleigh: “Hey London! Good to see you again! Sorry this one didn’t last long, but hey, I gave you all what you wanted, a knockout! I want to quickly thank Emma McGale for taking this fight – at least you aren’t like some of the higher ranked fighters I’ve challenged, afraid to fight!”

“As for me, I’m going to keep training and getting better. I may not punch the hardest, but I’ve got skills that few in this division can handle. I want to keep it slow and keep building, but I see myself getting a title sooner rather than later…I think the Commonwealth title might be an interesting target. I’m sure that there is someone who might fancy a title like that.”

“But for now, I’m going to go on vacation with my family and then I’ll be back to the gym!” 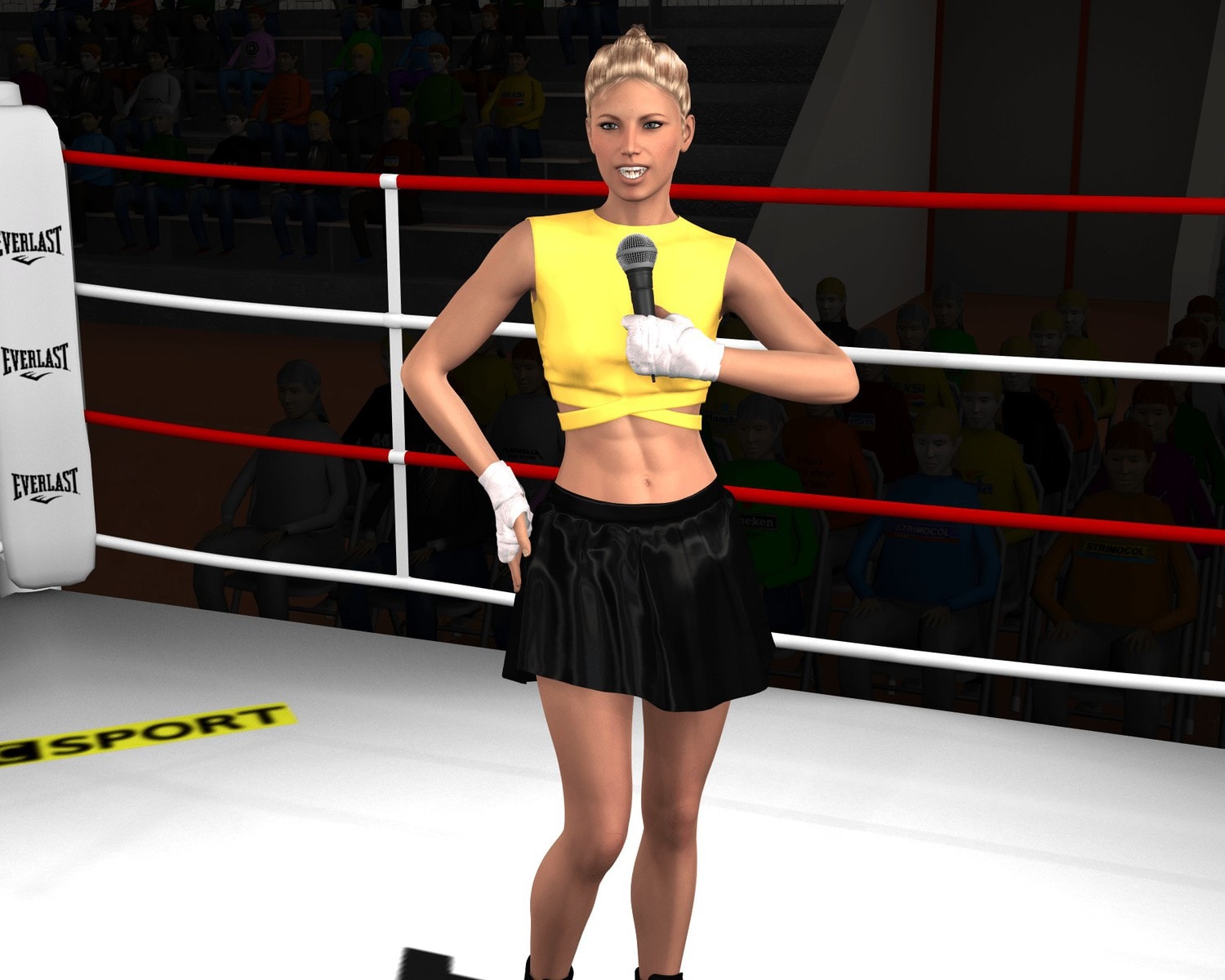 Kayleigh Parsons vs. Emma McGale – Round 2 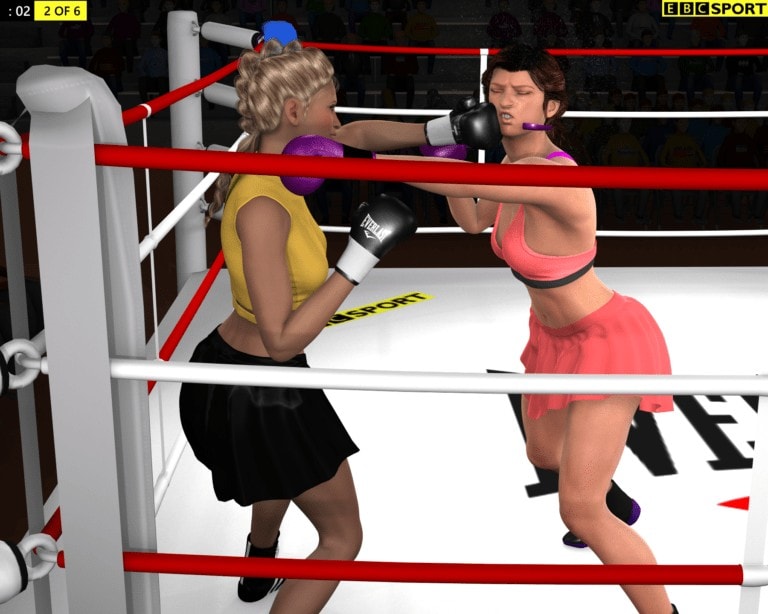