Heather Barker, featherweight Champion of Canada, was not exactly drowning in media attention. In fact, as she sat in a suburban Montreal Starbucks, she was pretty sure that no one was paying even the slightest attention to her. Heather had some small degree of fame in boxing circles…but that little fame she had did not translate to this coffee shop.

That suited Heather quite fine. With her laptop out on the table in front of her and earbuds in her ear, she was happy with being left alone. But she wasn’t about to be alone for much longer. Heather watched as her coach, Sylvie Chouinard, entered the Starbucks. They made eye contact for a moment, and then Sylvie went to order herself a tea. When it was ready, Sylvie came over and took the seat across from her.

“Your accent is still terrible,” remarked Sylvie in English. The older woman was perfectly fluent in both of Canada’s official languages. Heather’s proficiency in French was coming along, but it was a long way from fluency.

“It’s getting better,” she said defensively.

Syvlie smiled, “That it is.” The Quebecker took a sip of her tea, “So, have you finished the assignment I gave you?”

Sylvie’s assignment had been for her to watch all of Virani MacVicar’s fights, and then to rate her skills in various disciplines out of 10. It had been enjoyable viewing. It seemed like Virani was incapable of being in a boring fight.

“She wants to fight me for the Canadian title,” she observed flatly.

“Yes,” said Sylvie. “They contacted your promoter again a couple of days ago. They are amendable on many terms, so it seems like they want to get it done.”

“And do you want me to fight Virani?” Heather asked.

Sylvie looked down and stirred her tea for a moment, “I do not have an opinion. I am merely your coach.”

“I’m asking for your opinion.”

Sylvie made direct eye contact with her, “I believe that a champion should always defend their title against the best challenger that is available. That is the mark of a true champion.” Sylvie broke eye contact and shrugged, “But, I would not blame you for a moment if you wanted to take an easier fight for your first defence. Many fighters do. It may be the prudent thing to do.”

“Do you think I can beat her?” Heather asked.

“You sound like Yoda,” remarked Heather with a smile.

Sylvie blinked, not understanding the reference.

“Um. Well, I do think I can beat Virani. She’s a good fighter, no doubt. But she’s not unbeatable.”

“I agree. That’s why I gave you that assignment. I assume you have completed it?” asked Sylvie.

Heather turned her laptop to face her coach. 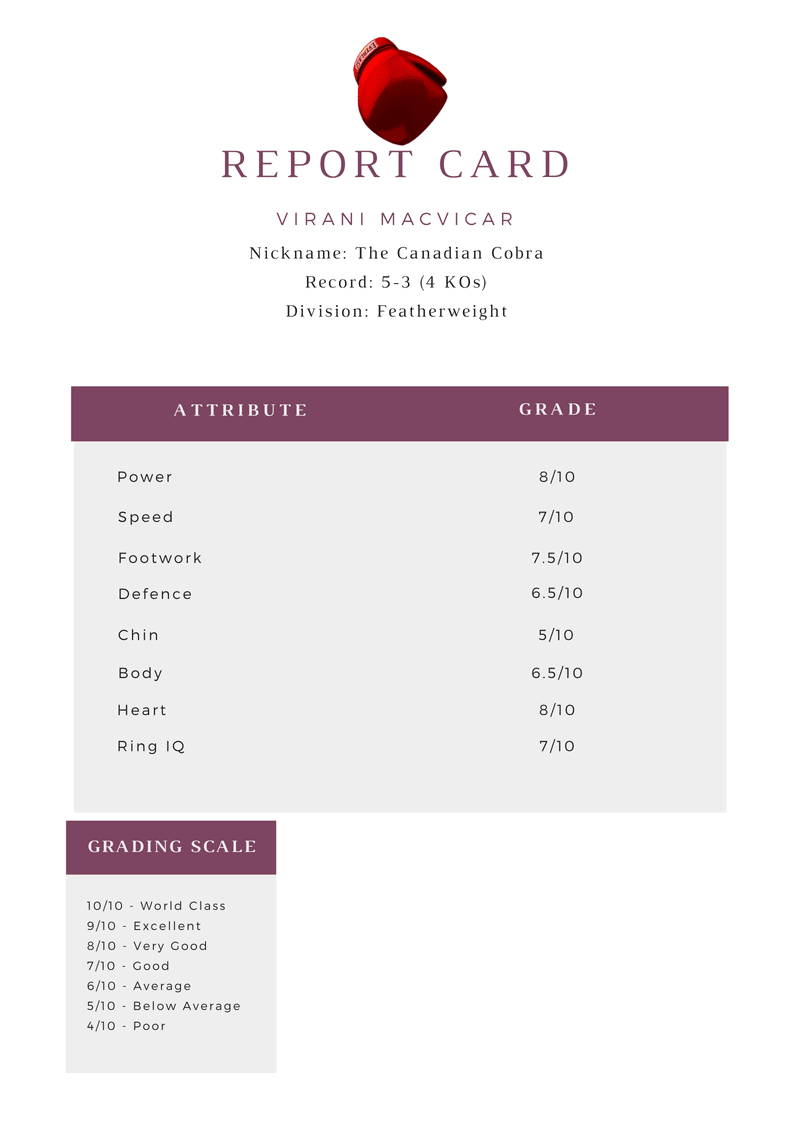 The Quebecker studied the screen for a moment and then smiled tightly. “Nice format. Such a millennial.”

Sylvie closed the laptop carefully, “Let’s discuss your assessment. What did you think of Virani?”

Heather chuckled, “You saw my report card on her. I want to know what you think about her.”

Sylvie nodded and leaned back in her chair, “Virani is a natural puncher that possesses above-average power for the division, especially in her left hook. Her right hand should not be ignored though. While defensively, the Canadian Cobra is a bit basic, she has seemed to grasp her defensive fundamentals better in her last fight. Still, she remains hittable and that will likely never change throughout her career.” Sylvie sipped at her tea, “And I believe that you underestimate her chin and general durability.”

Heather shrugged, “Rating her chin a 5/10 seems fair. She’s been knocked out 3 times in 8 fights. I’m not saying she’s got a glass chin or anything, but history suggests if you hit her had on the right spot, she will go down.”

Sylvie shook her head, “You misunderstand the context of those knockouts. She was knocked out twice by Lightweights, Lilim Alterion and Masae, she’s only been knocked out once by a Featherweight, and that was in round 6 of a gruelling bout with Kayleigh Parsons.” Syvlie made a conciliatory judgment, “Certainly I am not going to suggest that she has an iron chin, but with the amount of punches she does take, I think her chin is should be considered average.”

“I think if I hit her square on the button with my uppercut she’d be down for the count,” Heather replied, miming the motion for her uppercut as a demonstration.

Her coach smiled, “That could very well be true, Ms. Barker, but one should not count on that being the only path to victory.”

“I could outbox her too,” Heather opined.

Sylvie smiled slightly, “Could you though? You are technically superior to Virani, but probably by not as much as you think. She also has a good workrate, one that is superior to yours. You might land a higher percentage of punches, but Virani could land more of them.”

“It sounds like you don’t think I can beat her,” Heather said, displeased. She folded her arms across her chest to show that displeasure.

“And how do we do that?” Heather asked.

“By fighting where you are strong and she is weak.”