Knock knock. Someone is at the door at Virani’s flat. The Cobra has a hunch as to who is there since Alesia made it to town the previous evening.

Alesia: “It was a long flight but I’m here. You knew I wouldn’t miss your championship fight. No way!”

The two friends have a quick hug. 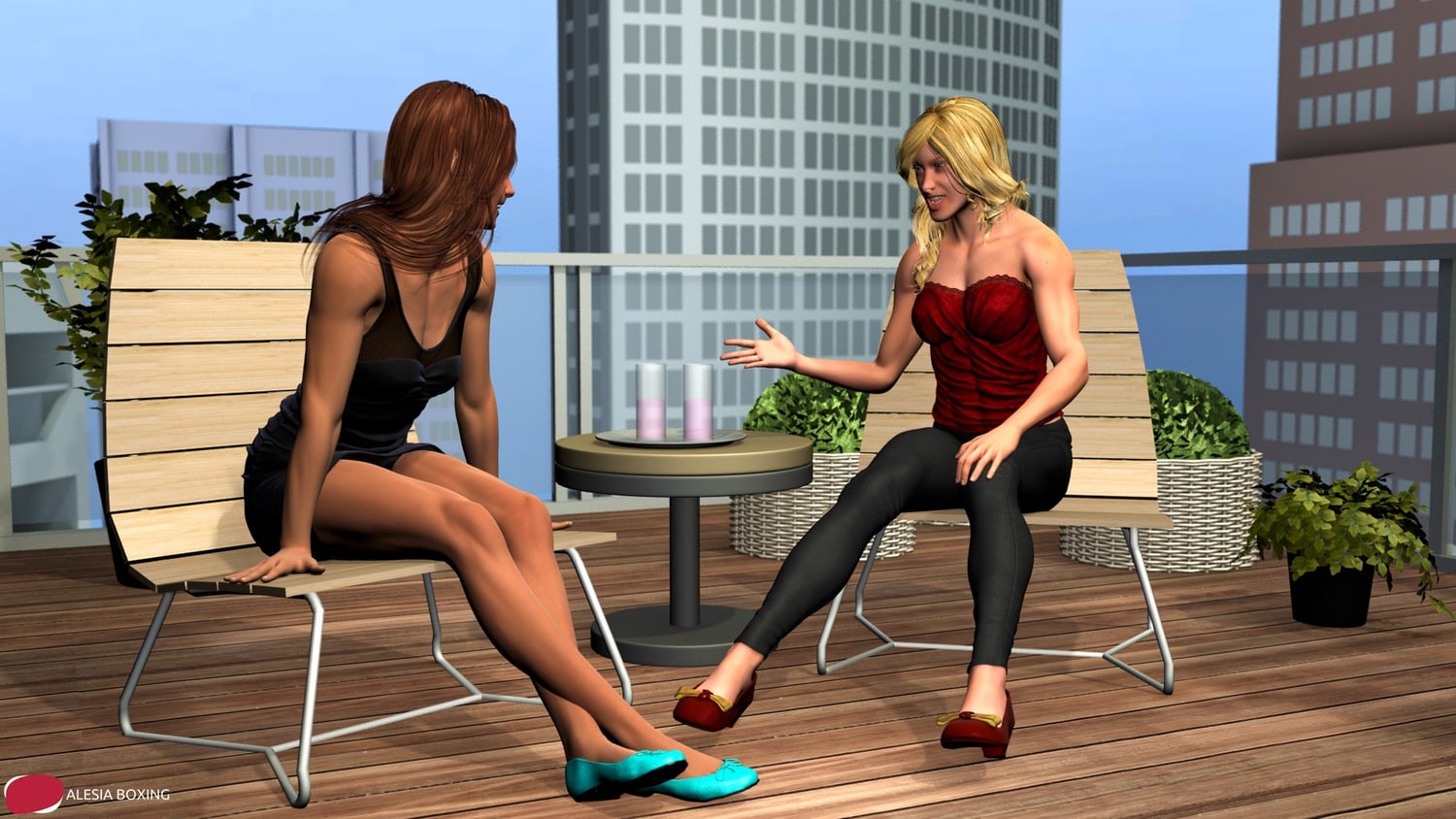 Virani: “Come in. Let me get ready and we can hang out.”

Ally sits down and looks around the flat as Virani puts the final touch to her makeup. She thinks: “Nice place. V has good taste.”

Virani: “Do you mind going to a sky bar? I know one with great views of the city. They have alcohol-free cocktails. I figure we should stick to that since we both have big fights coming.”

Alesia: “Let’s do that. I’ve missed my beer for the last couple of weeks. Can’t wait until the fight is over just to have one, really.”

The Canadian pats her playfully on the shoulder.

Virani: “You and your beer. It will taste better once you are German champion.”

Alesia: “You’ll have to drink that celebratory beer with me once the fight is over! It’s not an option.”

The two fighters take the subway – then an elevator, of course – and enter the sky bar. They find free seats with the best view.

Alesia: “Nice! Toronto feels so modern and chic. So different from Munich, which is almost 1000 years old. You guys are writing your own history and we live in museums.”

They look at the menu and make up their minds to order.

Alesia: “Argh. How slow is the service here? We’ve been here for 5 minutes and nobody came to see us.”

Virani snickers: “Always a diva, even when you travel overseas.”

Alesia snarls: “Leopards don’t change their spots. And cobras are venomous. We both know that.”

They finally order and get their cocktails.

Alesia: “Excited ahead of that match? Well prepared?”

Virani: “Yes! Thomas and I worked our butts off and I think I can beat Heather. She’s a good boxer. A tactician with French braids and a wicked uppercut. Geez, it feels like I’ll be fighting you in there, but a less dangerous version. We have equal experience and I hit harder.”

Alesia: “Ha! I’ve seen her win against Mechelle on YouTube. I’ll be cheering for you, of course, but I admit that I like her style. I saw that you improved your game in that fight against Prisha. And tortured her until she quit!”

Virani: “I did, and it was fun! But enough about me. I’ll have that beer with you in Germany if you answer questions today. I’ve been dying to know a few things.”

Alesia: “Whatever it takes to make you chuck down a Maß of Augustiner.”

The Cobra goes ahead, not realising that she just committed to have a full liter.

Virani: “What did you do before becoming a pro boxer?”

The German’s face lights up with a mocking smile.

Alesia: “Well, I was an amateur boxer.”

The Canadian rolls her eyes.

Virani: “You know what I mean!”

Virani rolls her eyes once more.

Virani: “Ohhh. That explains why you’re so good at mind games.”

Alesia: “The background story behind that started in the schoolyard, really. I was the one who stayed away from groups in the playground. I’ve been a loner for my whole life, standing out by being different and by minimising contacts with others. I got picked on because of that, of course, and many people think I hate everyone but that’s not it. I like being in my bubble and having personal space. At the same time, I’ve always had a sharp eye to pick up people’s behaviour and to understand what they are thinking, as well as where they are coming from. It doesn’t mean that I respect them or agree with them, but I always flip the coin to understand their side of the story. My observations were confirmed by psychological theories learned in uni.”

Virani: “So, you wanted to make a career out of it.”

Alesia: “I’ve written a few whitepapers and they had a good reception. My plan was to start a private practice once I was done with school. Dad would have lent me money for the overhead.”

Virani: “See, that’s something which makes me curious about psychology. No offense, but the people who are good at it tend to be a little crazy.”

Alesia: “It’s true! You can’t be a regular Joe or Jane who just wants a simple life to effectively dive into the human mind to grasp its subtleties or its deep motivations. Psychologists are all a little psycho. I’m just well-branded by calling myself a Diva.”

Alesia: “Without bragging, I also believe that it takes superior intelligence to recognise this and deal with it. People who are aware of their flaws are smarter than people who are blind to them. I prefer to be a little crazy and to understand how my mind works, as well as other people’s, than to pretend I’m a perfect little angel who never does anything wrong. Flaws shape us and we can’t avoid them. Denial is one of the telling signs that you are dealing with sociopaths. They build reputations instead of working on themselves.”

Virani: “And being a little crazy makes us accept the risks when we get in the ring. By the way, we never see your parents at the fights. Why? Are they against you doing pro boxing?”

Alesia: “That’s another thing I kept private. Dad gave me the nod, and my mom is very reluctant. She’s a writer, the artist type who doesn’t understand why you’d get in there and get punched in the face. Dad watches the fights at home while mom runs away to avoid seeing that on the screen. She’s overly protective and always has the worst case scenario in mind, even if you walk down the stairs at home. You won’t see them at the fights because of that. It’s ok. I just don’t want them to question my career choice. That would piss me off!”

Virani: “What will you do after you are done with boxing?”

Alesia: “I don’t have a plan. It will depend on how things go. If I become German champion and then world champion, coaching and commentating on TV will be possibilities. But then, I still like psychology. A return to that is not excluded. I also love fashion. I wouldn’t mind working in that industry.” 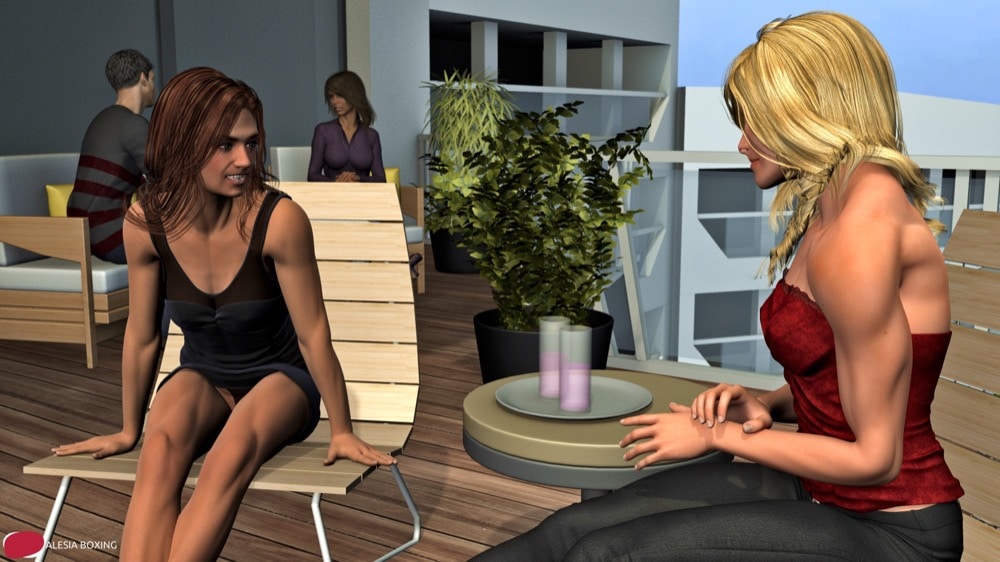 The conversation between Virani and Alesia continues at the sky bar in Toronto. The German has questions for her friend.

Alesia: “I want to know a few things as well. Who are the people you are the closest to here? Friends or remote family. I think I’ve only seen you with your coach!”

Virani: “Um, there’s not much family to speak of around here. A lot of my familial relations are still in India and we are estranged, to say the least. There’s a bit of a language barrier, as you might imagine. I’m actually still quite close with a lot of my high school friends. I went to a private school, so I have known them for many years! The fact that I was a bit on the rich side was not a problem for them, as many of their parents were richer than mine!”

Alesia: “I suppose it made it easier not to stand out.”

Virani: “Well, I was always going to stand out being of Indian descent. But it wasn’t too bad, I think.”

Alesia: “I still struggle with the fact that you were a lawyer for years before fighting. How did you cope with the crazy work hours?”

Virani: “I don’t know. It’s just expected of you to put in the hours, and you know that if you aren’t going to do it, then you aren’t going to make it. Honestly, it was my first real job and I didn’t realize how insane it was. Looking back, I spent way too long at the office, but.. there were some fun moments too. Just not enough of them. I think it was inevitable that I was going to burn out.”

Alesia: “With what you inherited, you’re richer than most fighters. Do you get unwanted attention from people who think they can gain something from you?”

Virani: “Hmm. That’s an interesting one. I think that actually being good-looking helped me out there. It’s always taught me to be careful about what people really want from me and to find those that simply don’t care about my inherited wealth. I think it also helps that I’m not necessarily a big spender. Sure, I have a nice home and nice clothes, but I’m not exactly out there flashing cash, so I don’t attract the same sort of people that some people get around them.”

Alesia: “Do you think that a rematch with Lilim in the future is a good idea?”

Virani: “I am not opposed to it, but I don’t think I’d ever seek it out. It’s a nightmare matchup for me. Lilim’s physically bigger and stronger, a huge puncher and with a far better chin than I have. Like I think I could beat Kayleigh at some point or even Masae, but Lilim… I don’t know, it feels like a bridge too far.”

Alesia: “You never sound afraid of a big challenge, though..”

Virani: “I think I’ll stay within my own weight class for now!”

Alesia: “And your own post-boxing plans?”

Virani: “Well… I think that’s a long way off, still. But I could go back to being a lawyer, though I’d say right now I’d enjoy having a go at being a promoter.”

Alesia: “You already own Cobra Promotions today. So you are a promoter even though you have a CEO. It will be interesting to see what direction you give to that company.”

Virani: “I think that a lot of promoters are doing things in a very old-fashioned way, and I think that I could do a better job.”

Virani: “Oh no, I’m not going to tell you so that you can steal all of my good ideas!”

Alesia: “You Canadians are such lightweights.”

Virani: “No, you’re a Lightweight. I’m a Featherweight.” 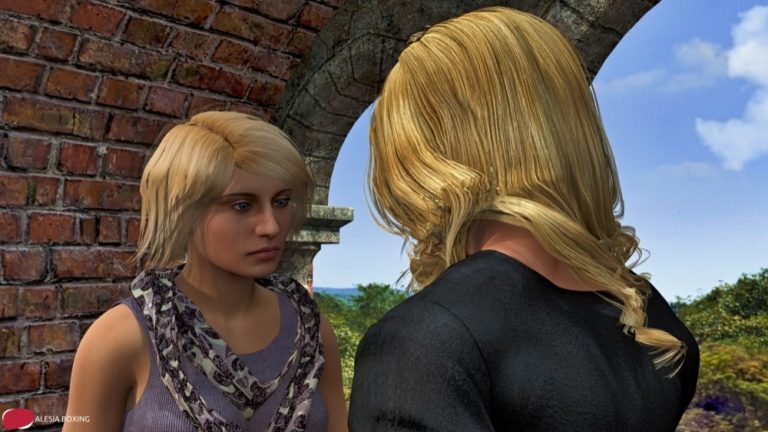 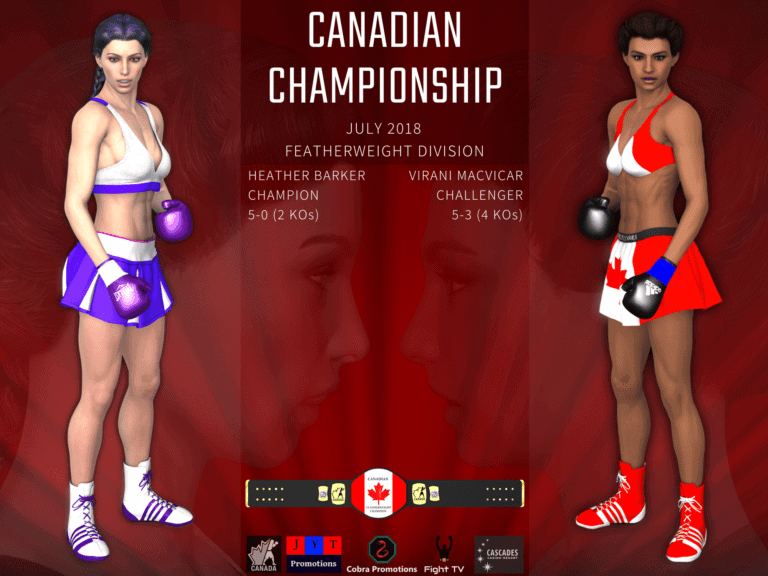