Commentator: “As befits a title fight there is not an immediate swell of action. These ladies have 10 rounds to figure each other out, there is no need to rush! MacVicar, as we expected, is content to be the agressor. She’s not exactly throwing everything she has, but she is on the front foot. But now Heather avoids a jab with a nice roll…”

Virani: Heather’s pretty slippery, and as Thomas told me to expect, she’s really trying to get inside. She makes a good slip of my jab, but I’m in good position to defend if she tries anything.

Heather: Early on, the only thing that surprises me is that Virani is a little bit faster than I expected. She moves pretty well in the ring too – nothing fancy, but effective. Finally, I manage to time one of Virani’s jab and slip inside. There’s opportunities here…

Alesia: “Double that jab, baby! Force her to make a mistake!” 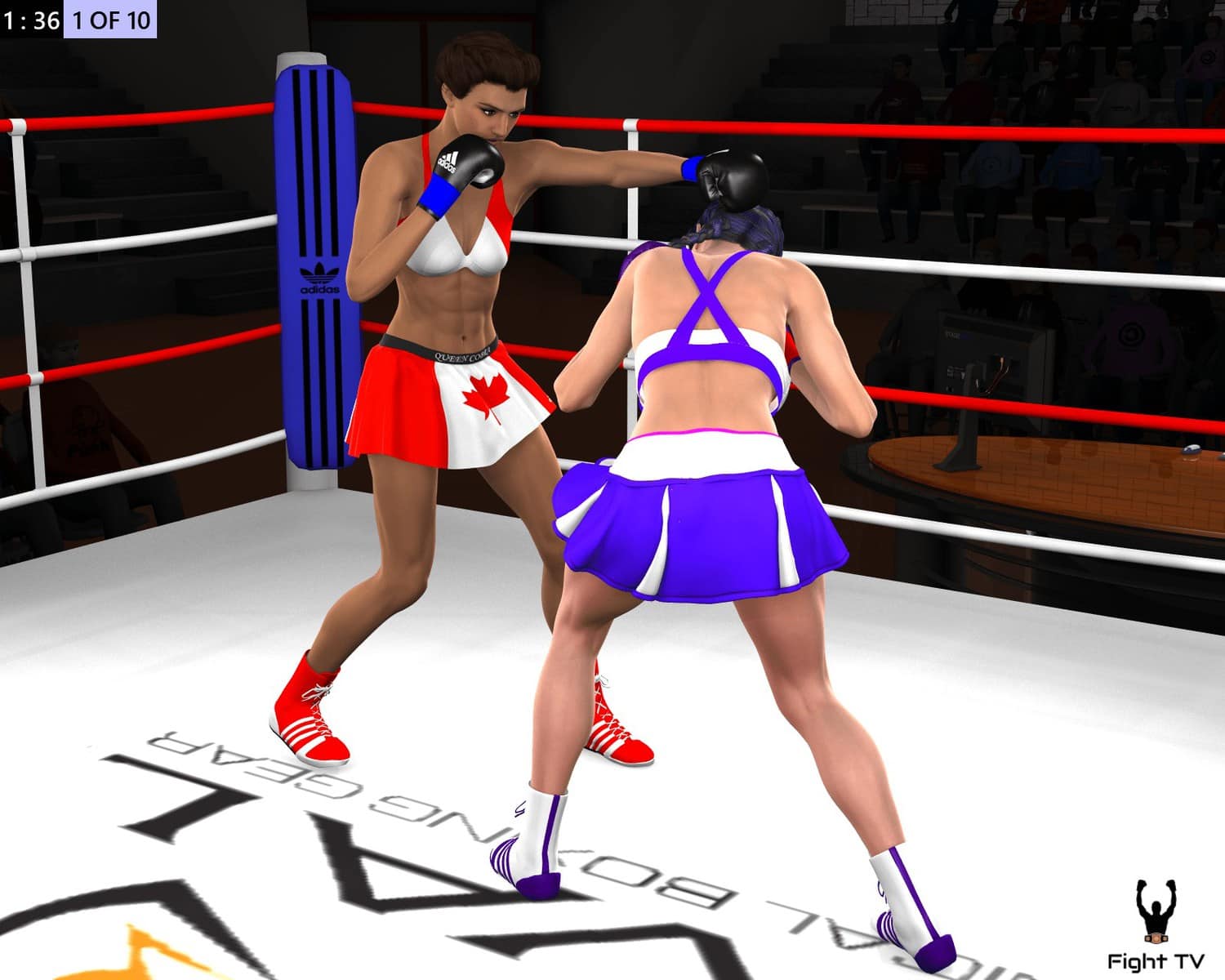 Virani: Ungh that was a solid shot, but I can get you with my right hand now…

Heather: Coach said to go to the body early, so that’s what I’m doing…

Alesia: “Throw the right hand! She won’t see it coming!” 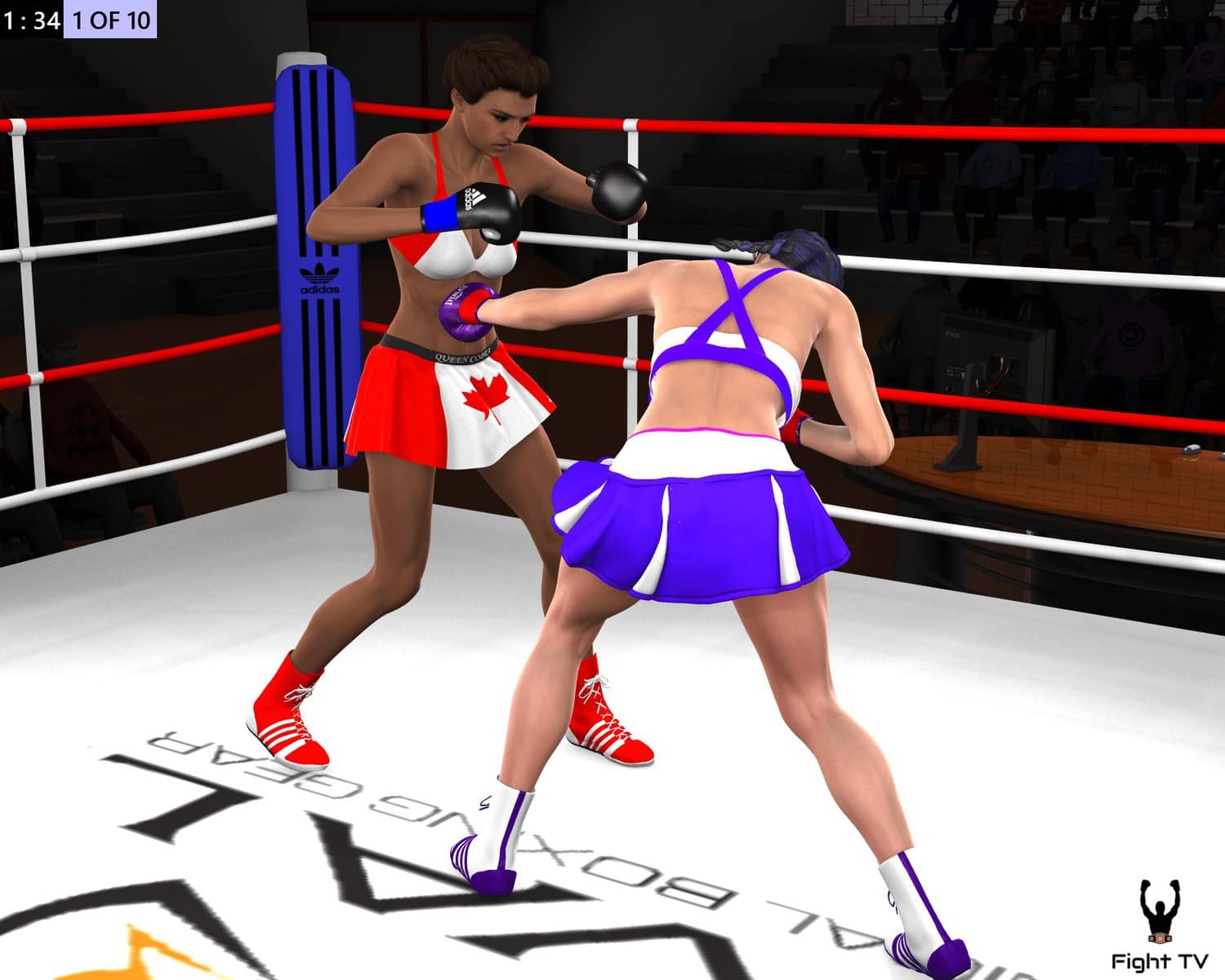 Commentator: “MacVicar comes back over the top with a crunching right hand that lands with authority! Heather landed a decent punch to the body, but Virani paid that punch back with interest!”

Virani: Heather did two things right, slipping my punch and landing one of her own, but she forgot that in landing that one punch, she left herself open. Maybe the other fighters she has fought against couldn’t do what I did. Works for me.

Heather: “Ungh.” Damn, Virani has fast hands, and powerful ones. Damn her.

Thomas: That couldn’t have been what Sylvie had wanted. A stupid risk from her fighter. Virani is too good, too experienced to let such obvious openings go unpunished.

Alesia: “Great! Fast hands. She didn’t even have time to react!” 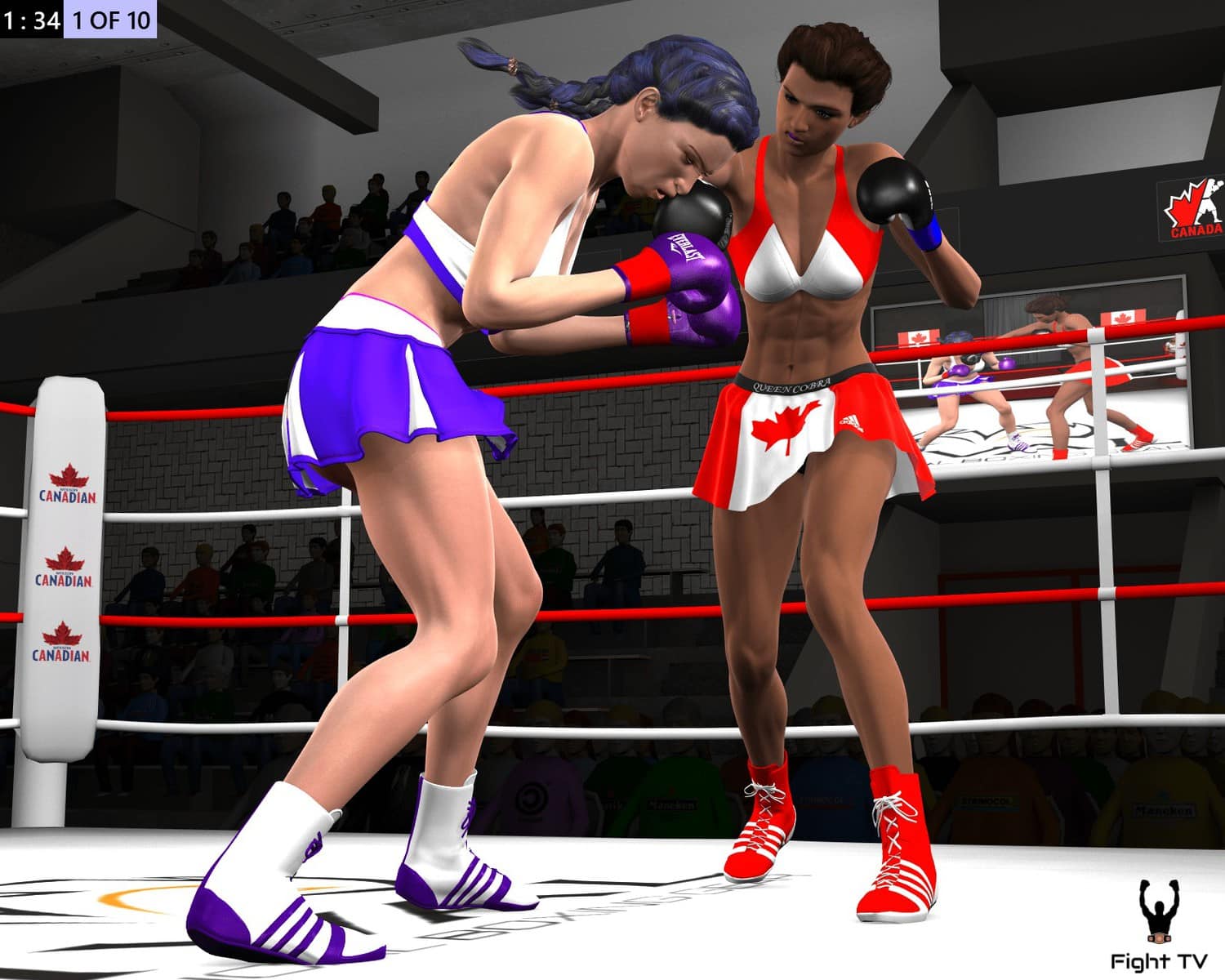 Commentator: “MacVicar is enjoying a strong start in this fight. She doesn’t seem to be cowed by the occasion at all. Heather tries a wild left hook that Virani had well covered off and she goes to the body with a left hook of her own. That’s a dangerous sort of punch for Heather to take, because if it catches her just right, that could be the fight right then and there…”

Virani: I’m not sure Heather has quite settled into this fight quite yet, she still seems anxious, trying to land punches where there isn’t an opportunity. Big fight jitters or just lack of experience? Does it really matter? I block a left hook and land one of my own to the body. I’m going for the liver, but I don’t really get it. Still, I’m sure it hurts.

Heather: God damn it, I can’t believe that Virani is doing this to me. I’m trying to get my hands on her, but she’s not letting me. Damn it.

Alesia: “If Heather keeps having this loose defense, damn. Virani will carve her like a pumpkin. A purple one, that is.” 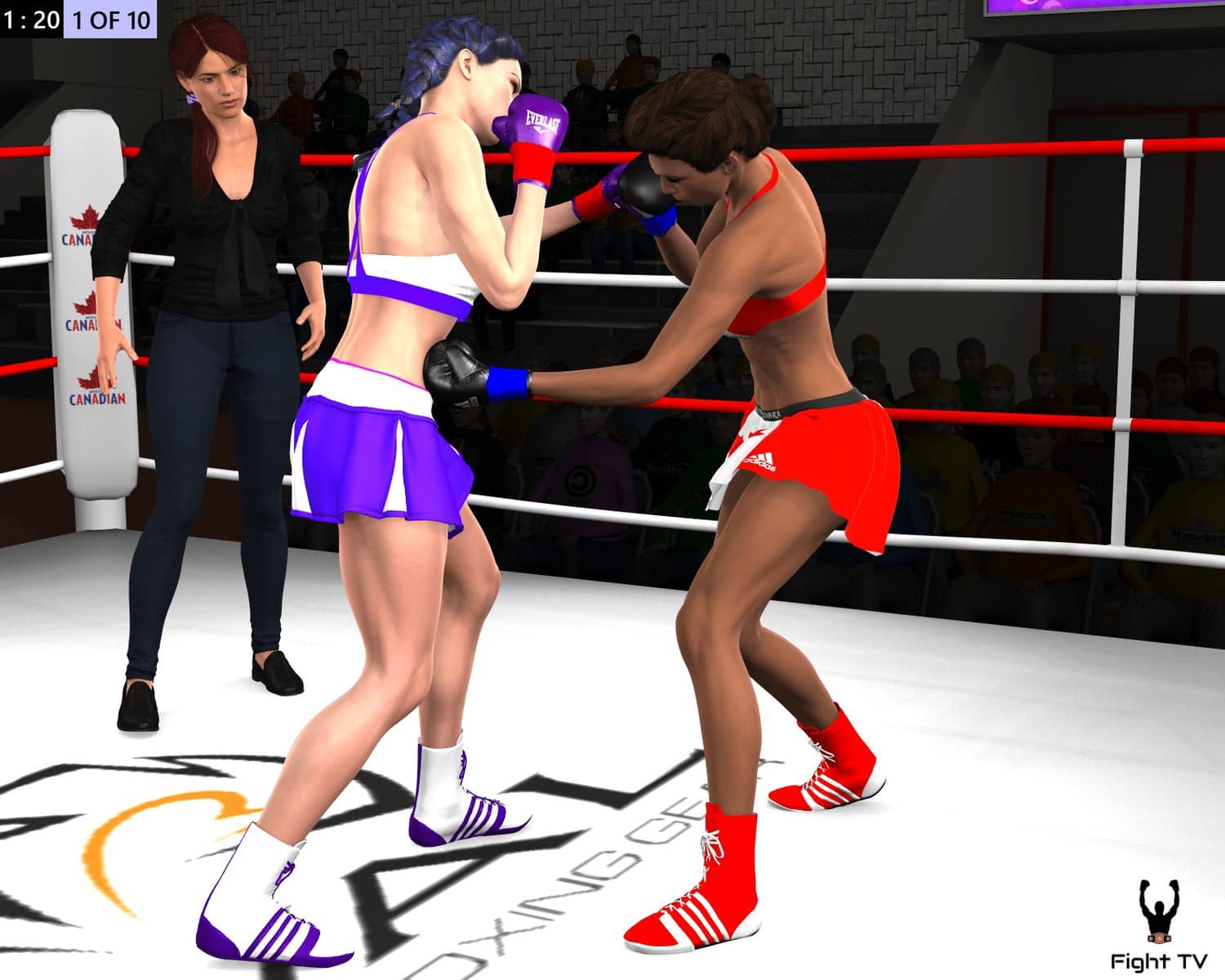 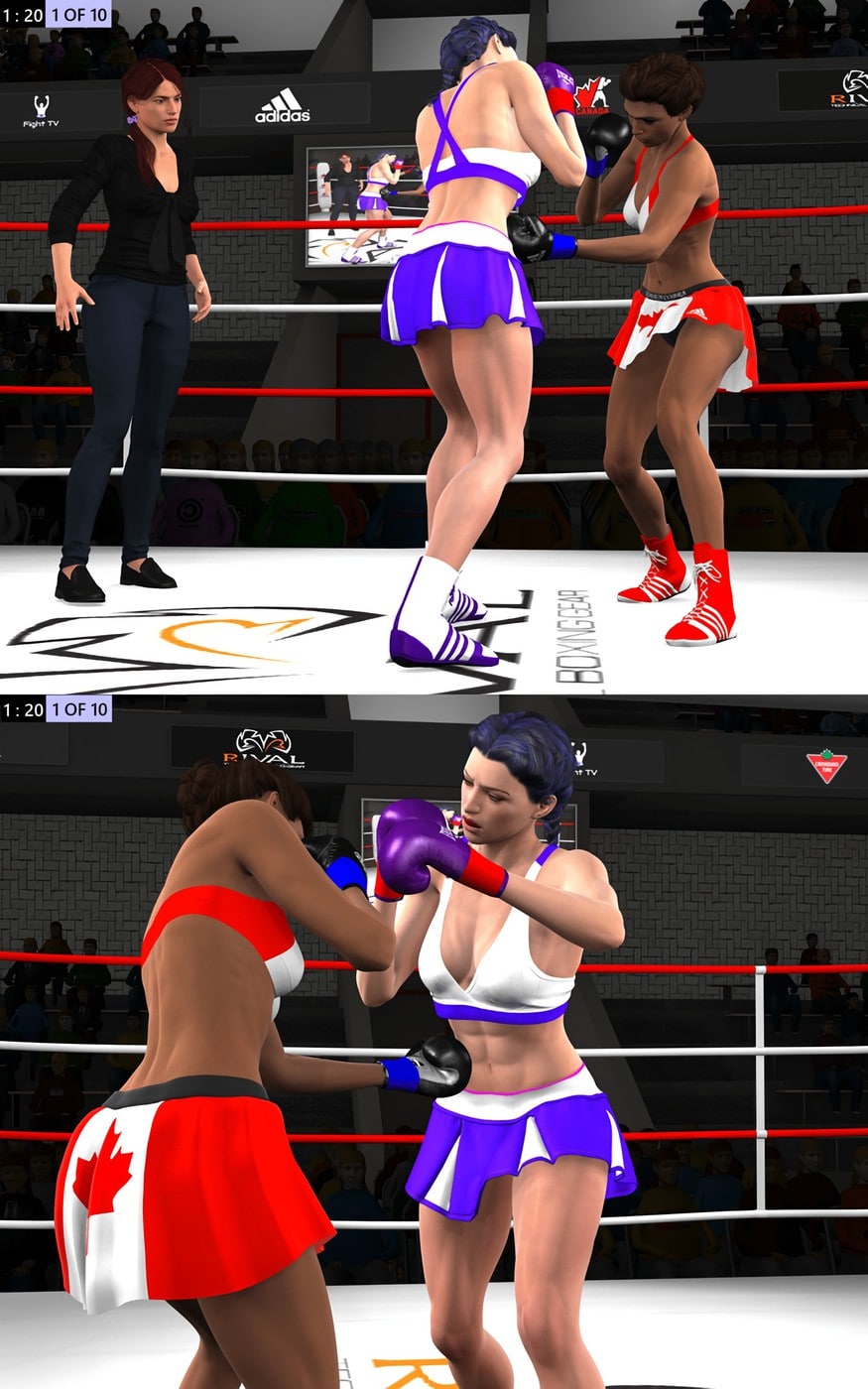 Commentator: “This is turning into a round that could have come straight from MacVicar’s playbook. She’s boxing at a range that is clearly comfortable for her and she is getting chances to light Heather Barker up on occasion…and there’s that left hook landing. Heather took it well, but that should be a warning, if Virani catches Heather clean with one of those – it could be a short night!”

Virani: Heather tries to slip to her left, but her guard drops as she does it, and I rip in a left hook over her hand. It doesn’t find her chin, but it knocks her head around quite nicely. Nice to land a left hook early – a nice warning shot.

Heather: Damn Virani has a sharp left hook. Gotta watch out for that. Like Sylvie said, I gotta keep my right hand high…

Sylvie: This is all wrong. The approach from Heather is good, but she is trying too hard to get inside. She can box with Virani if she wants to.

Alesia thinks: “She’s on an early roll. I think Heather can box better than that, but it’s nice to see V starting well.” 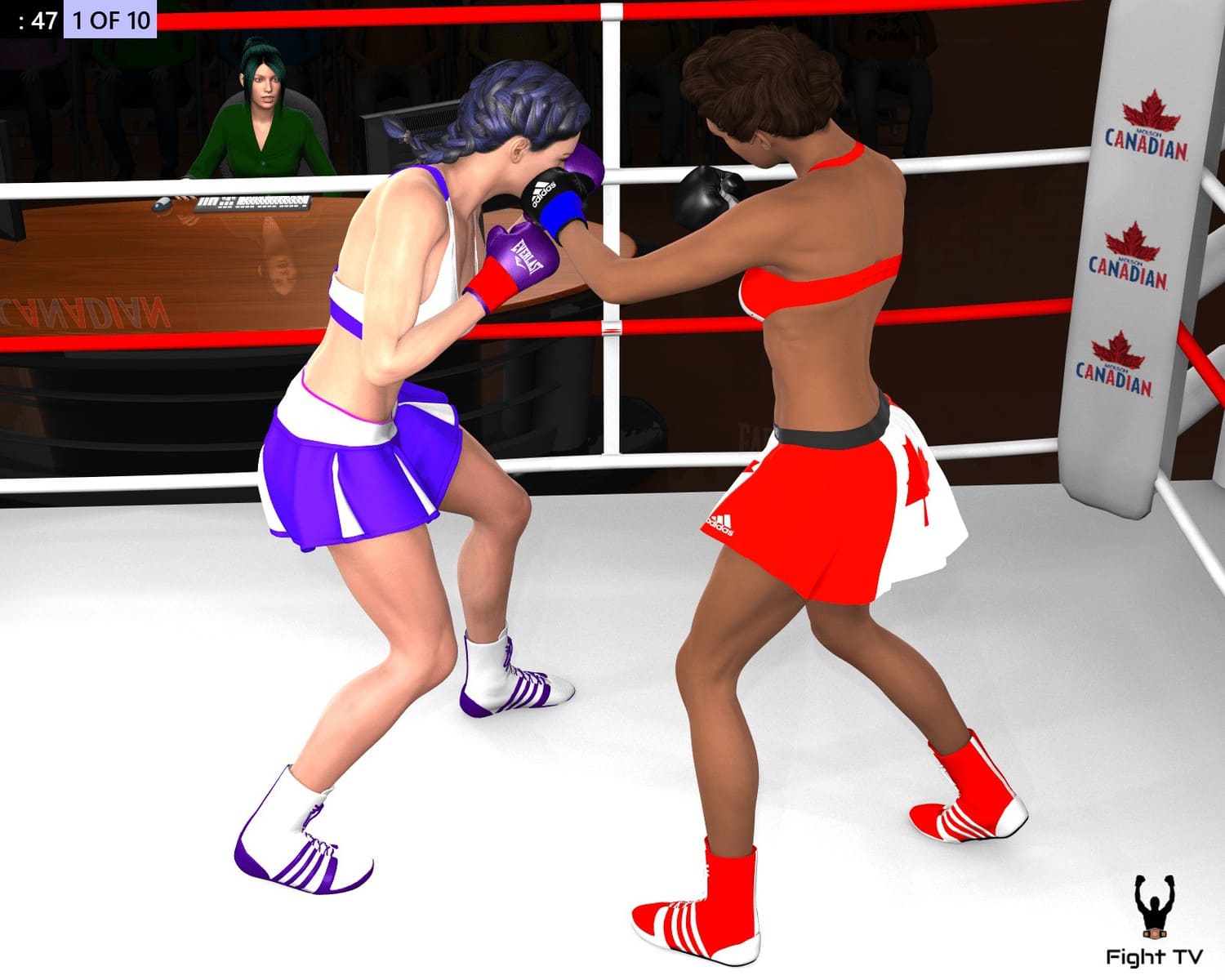 Commentator: “Barker is looking for something to build on in this round, and she lands a nice little jab to the stomach that catches Virani somewhat unprepared. Small building blocks for the Champion.”

Virani: I guess Heather is going to target my body. I have to react quicker to these punches.

Heather: Hah, finally I land something good and Virani has no reply. I could get used to this.

Alesia: “Use your elbows to block these! Come on!” 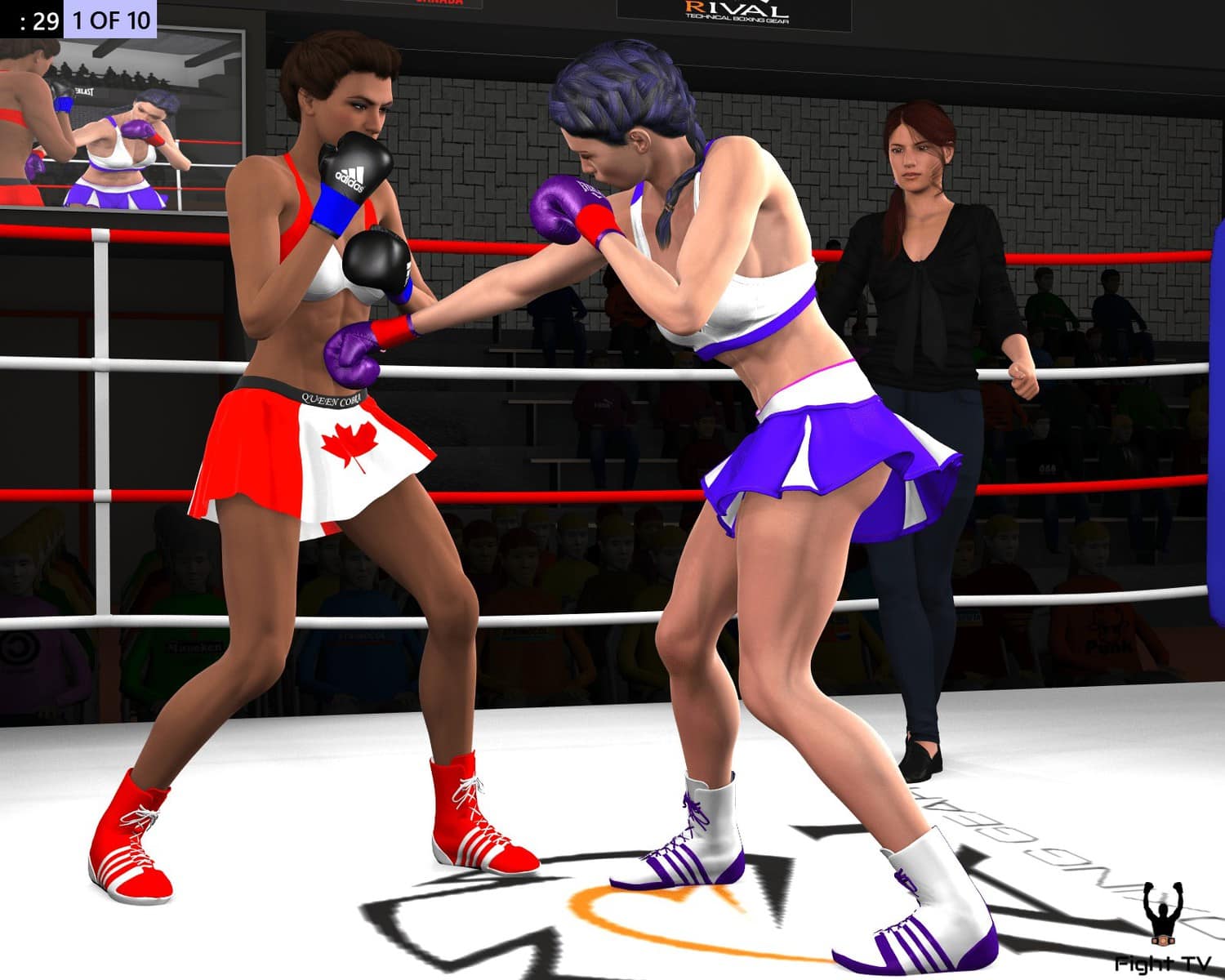 Commentator: “Heather Barker seems to be on the losing end of this one, but she is trying to leave a last impression on the judges, but she’s being a bit wild, as Virani manages a little slip….”

Virani: Jeez, Heather doesn’t like losing rounds does she – she’s trying to steal this one by landing a late eye catching punch, but it’s just so..obvious, that I manage to slip her big right hand.

Heather: I hear the ten second clappers, and it puts me right into aggressive mode. If I can land a big punch, I can maybe steal this round. I manage to get Virani on the back foot, but she avoids the incoming punches well…

Alesia: “What’s up, Kayleigh? You look bored out there.” 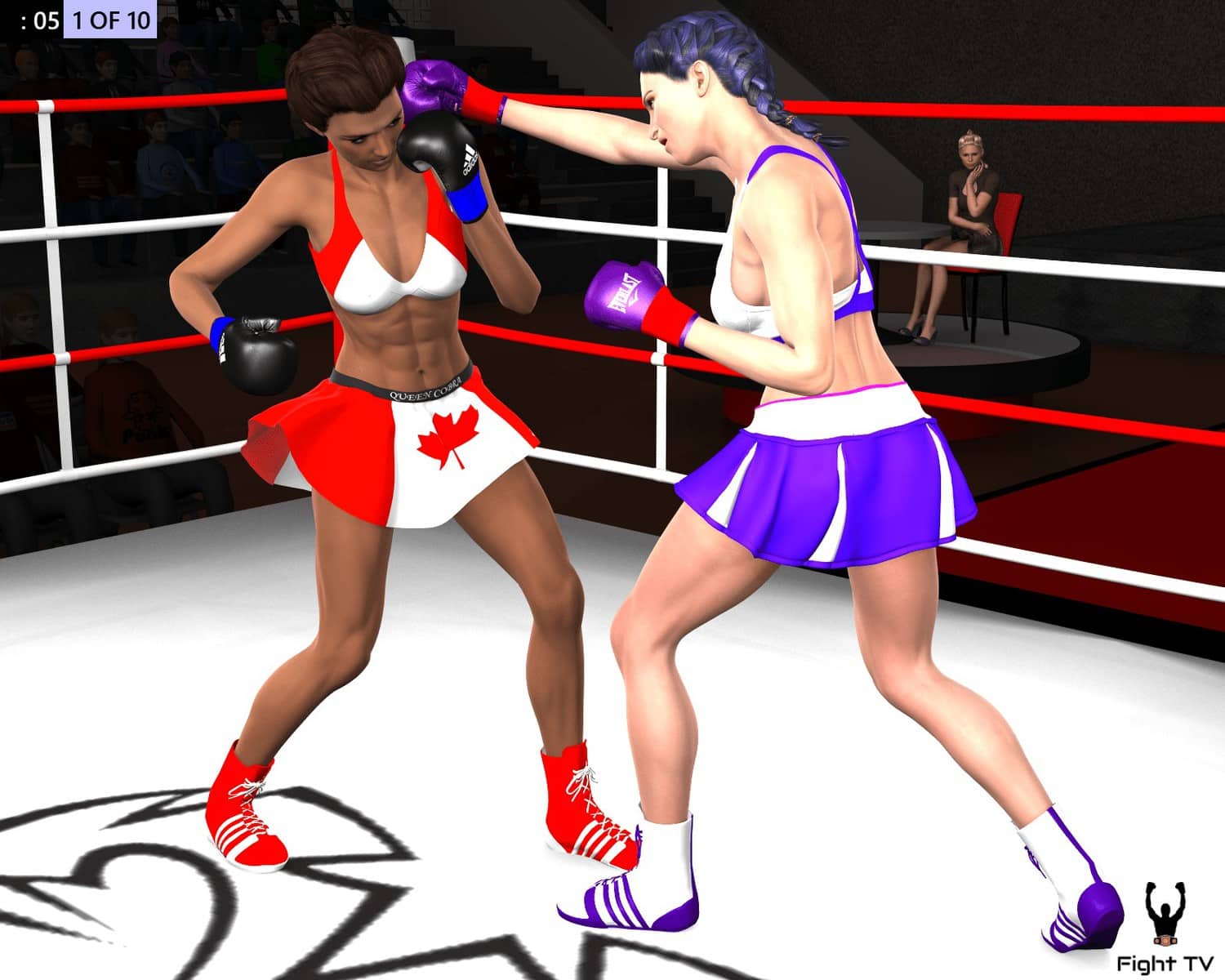 Commentator: “MacVicar makes Barker pay for being too aggressive, landing a snapping right hand that lands with a solid ‘thud.’

Virani: I’m not usually a counterpuncher, but if Heather wants to make mistakes that I can punish, I’ll gladly oblige.

Heather: “urgh!” That right hand rattles my brain for a moment. Virani’s got fast hands, faster than I thought she had, I’ll admit. Not as easy to hit as I had hoped too. Not a perfect start.

Alesia: “Nice shot inside! Finish this round with a left hook!”

DING! End of Round 1 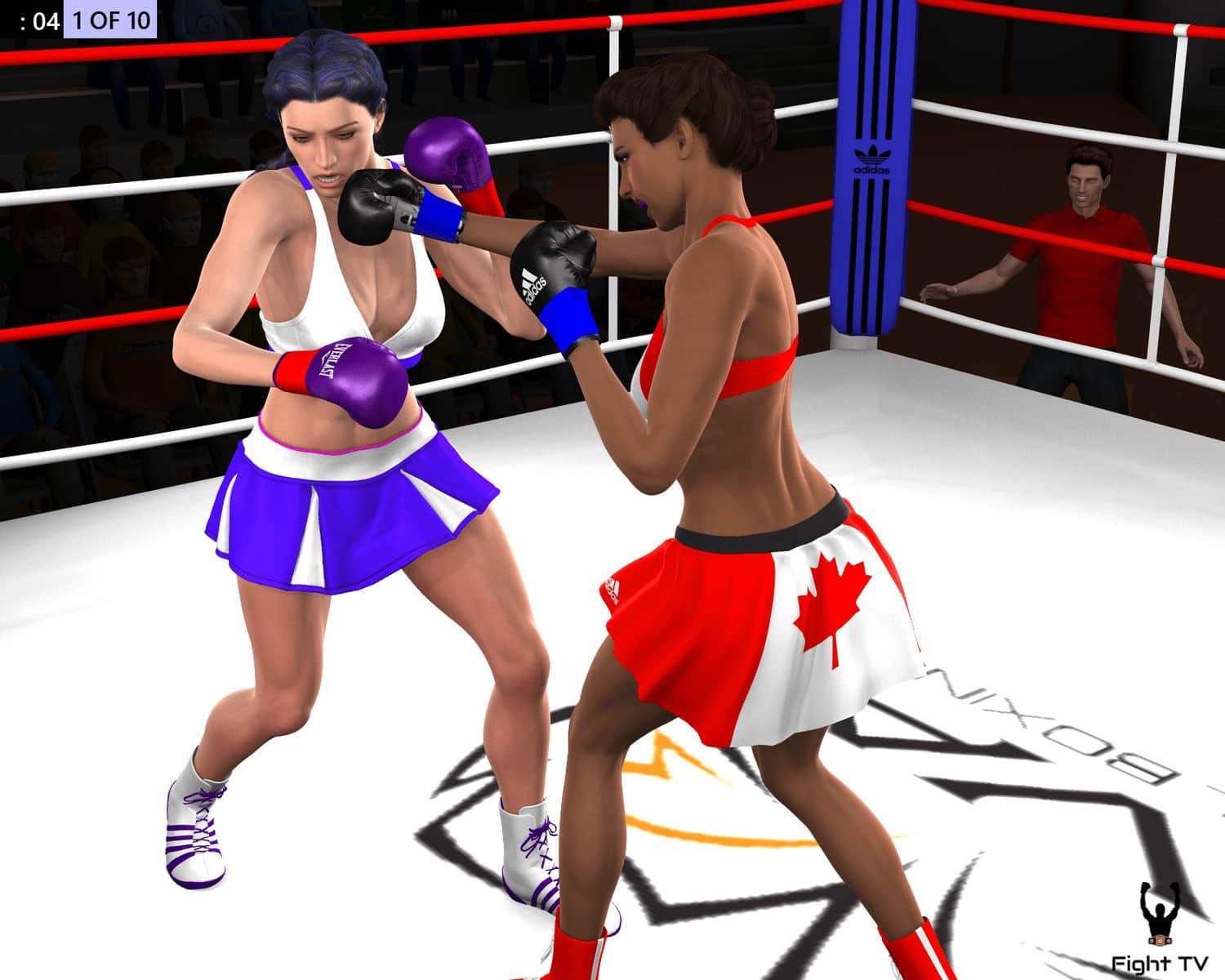 Commentator: “Let’s go to the corners and see what the coaches and fighters thought of that opening round. Challenger first…”

Thomas: “That was a beautiful round. You landed all the big punches and kept Heather at bay well.”

Virani: “She’s tough, she barely reacted to those punches I landed.”

Thomas: “We knew she’d be hard to break down, but you are showing that you can outbox her too.”

Virani: “She’s going to the body a lot.”

Thomas: “We suspected that she might do that. Stay long, fight tall and keep an active jab. When she tries to get inside, tie her up, like we practiced.” 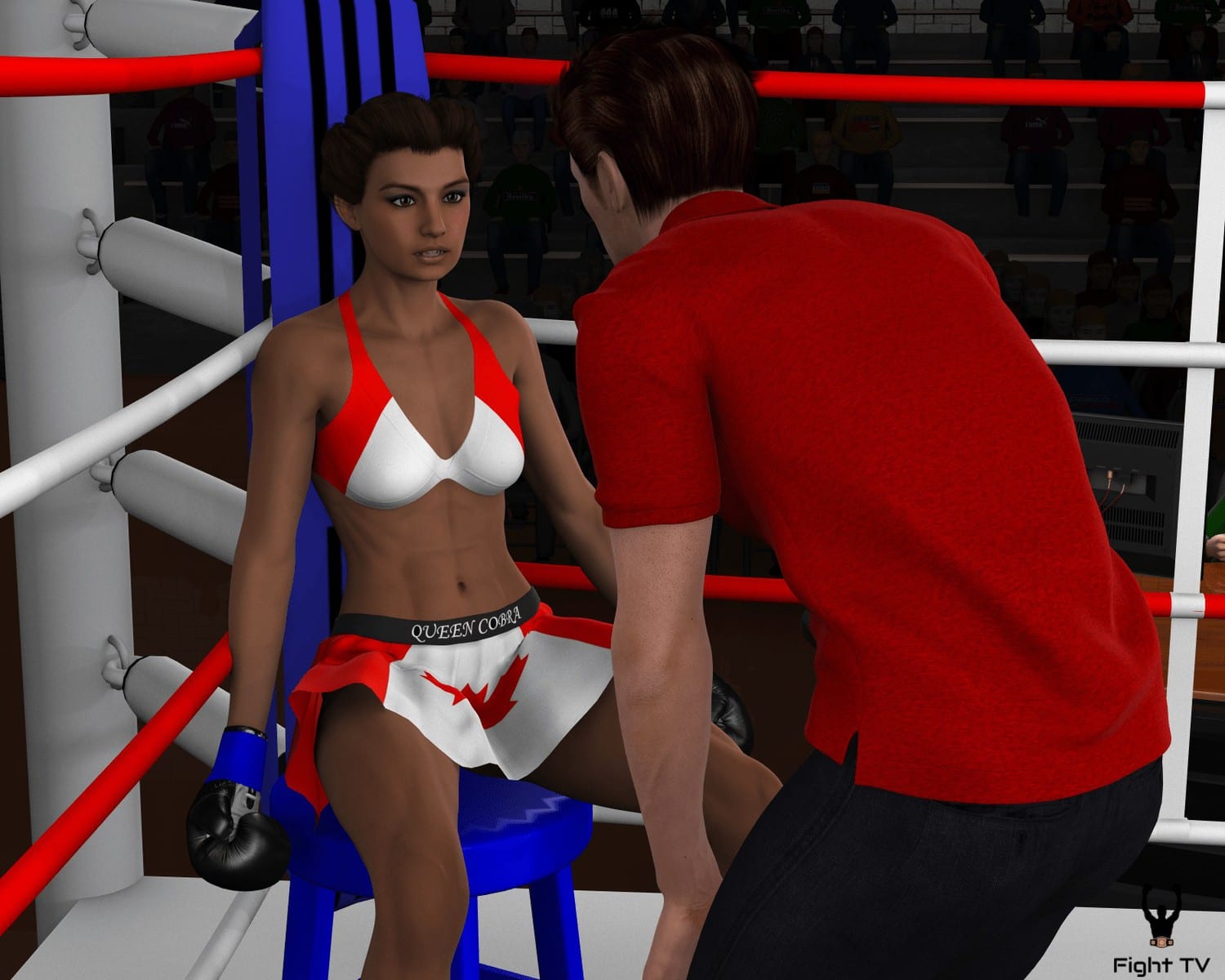 Commentator: “Heather got off to a rough start in this one, let’s see if Sylvie Chouinard can tell her charge how to turn it around.”

Heather: “She made me look stupid out there!”

Sylvie: “Calm down, champ. We knew that this was not going to be a simple fight. But you are pressing too hard. Take opportunities as they come, do not try to make things happen. Virani is known for making mistakes and leaving openings, but if you give her even more openings, she’s going to take them.”

Sylvie: “As I told you. You are also too focused on the game plan – you don’t have to spend all the fight trying to get inside. Activate your jab, and move your head, otherwise Virani will move it for you!” 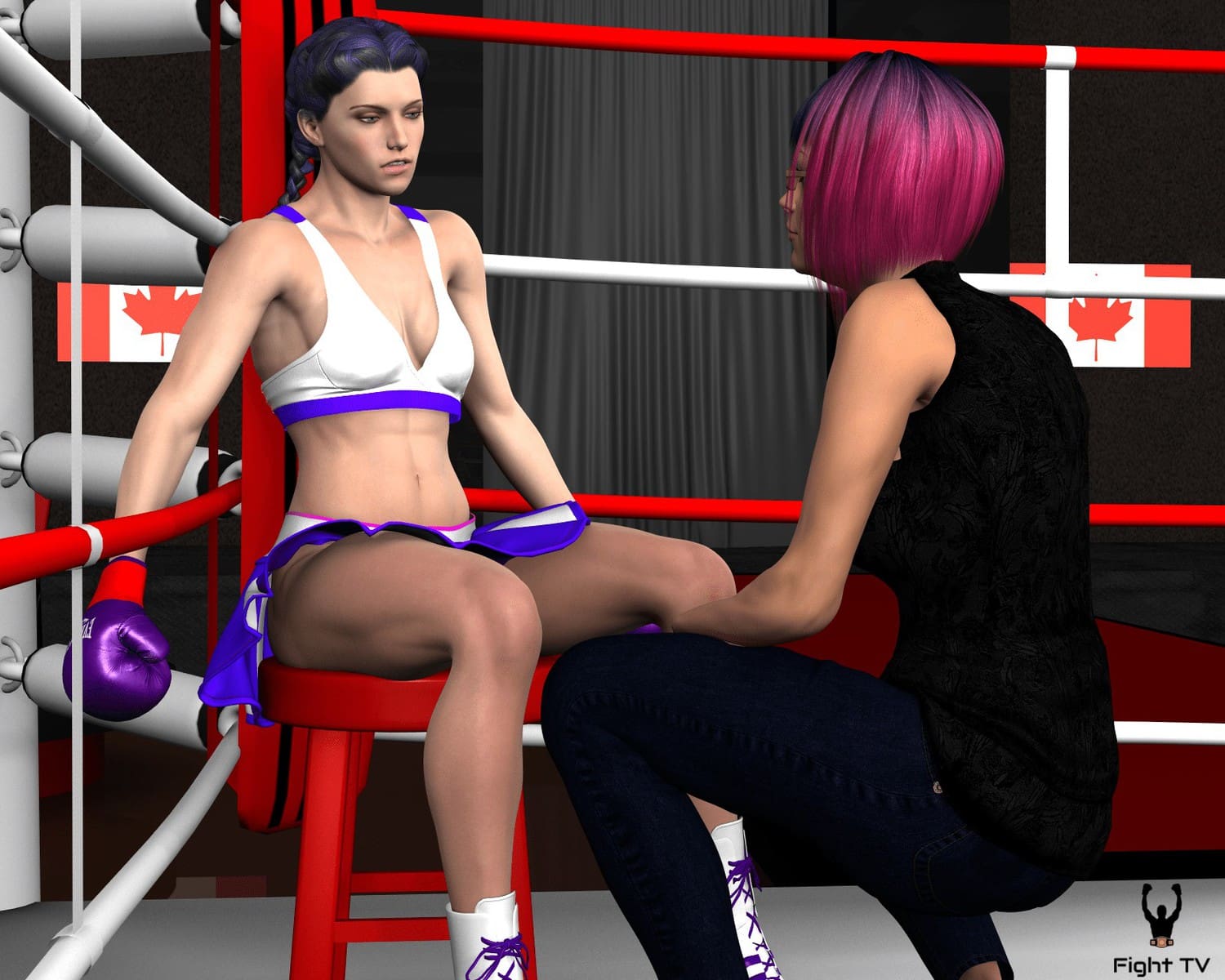 Commentator: “Well, there’s not much to say about a round that was rather obvious to score. Virani landed more jabs and more power punches than Heather Barker, and that’s a pretty good way to win a round. The strategy games will continue in the second round, can Virani land a telling punch, and can Heather get inside and be effective with body punches?” Our questions will be answered very soon. 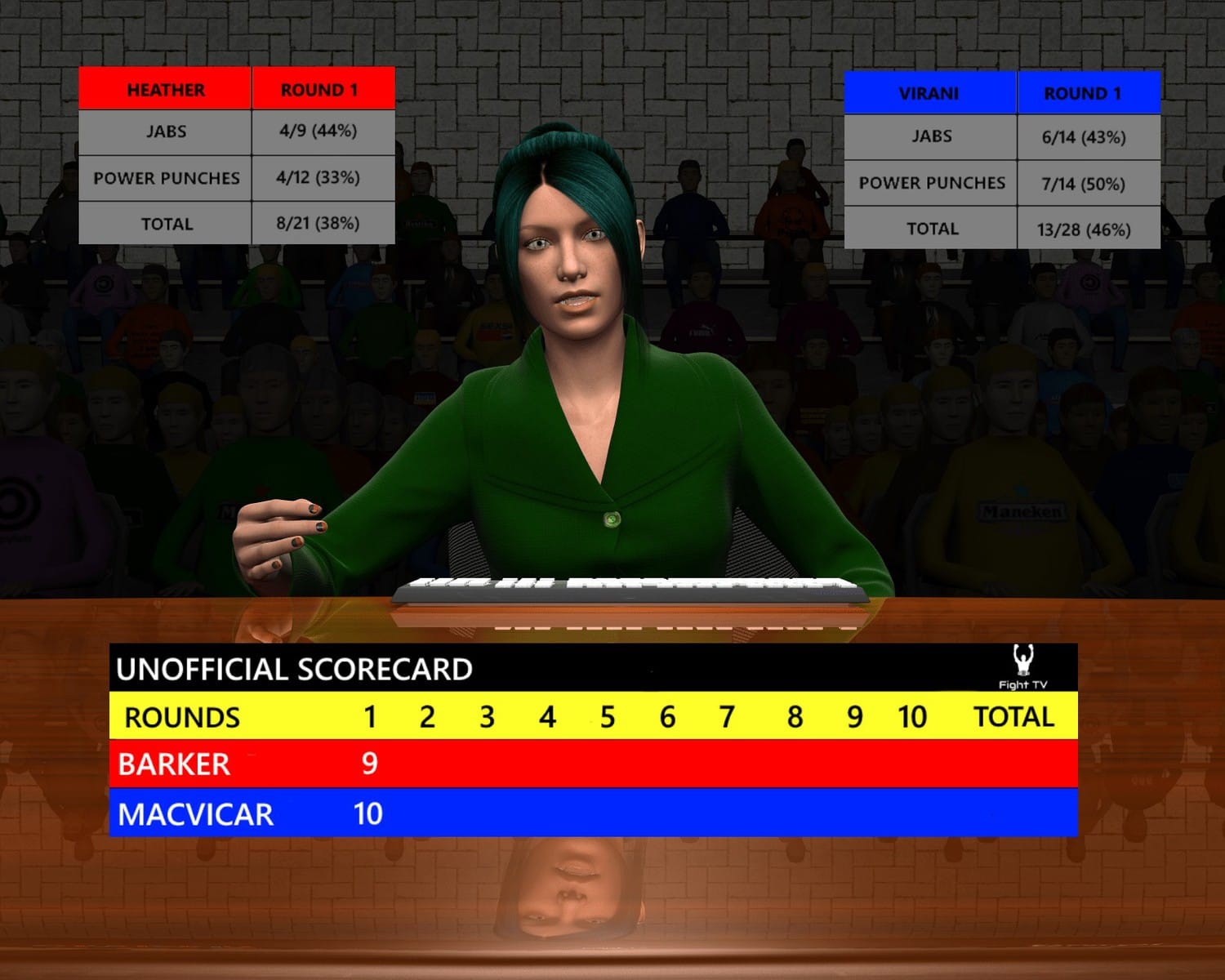 Heather Barker vs. Virani MacVicar – Round 2 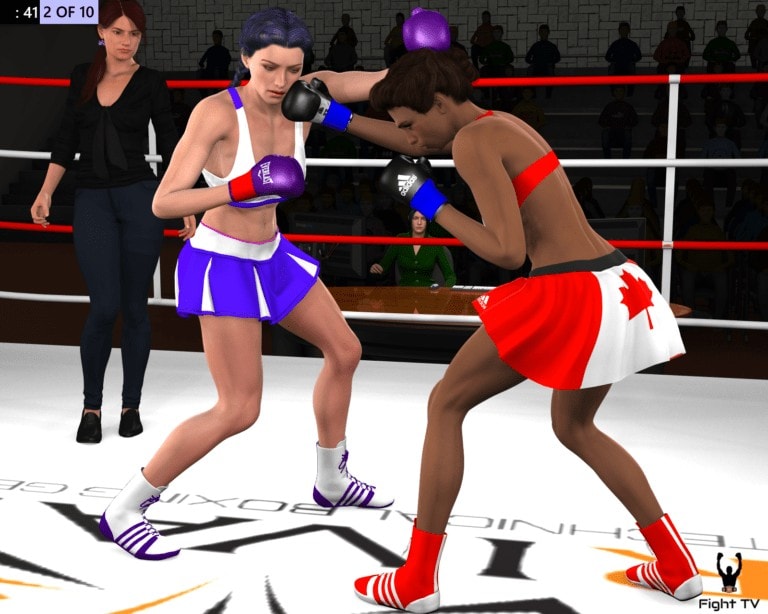