Commentator: “This has been a cagey start to this second round for both fighters. It’s a bit out of character for MacVicar, but it is inciting Heather to take more and more risks. She throws a right and then a left hook, which Virani deftly avoids with some nice head movement.”

Virani: Come to me Heather. Open up and make mistakes…get frustrated.

Heather: None of this plan is working out at all. I can’t hit this girl right now! Still, I’m in close, and I can probably use my best weapon…

Alesia: “Virani is becoming a boxing scientist. Her lab coat is a bit unusual, though. How do you see a rematch going if she wins? I bet it would be tougher.”

Kayleigh: “Virani has cleaned up a lot of her flaws, but I think she still comes apart under pressure. I wouldn’t count out Heather just yet either.” 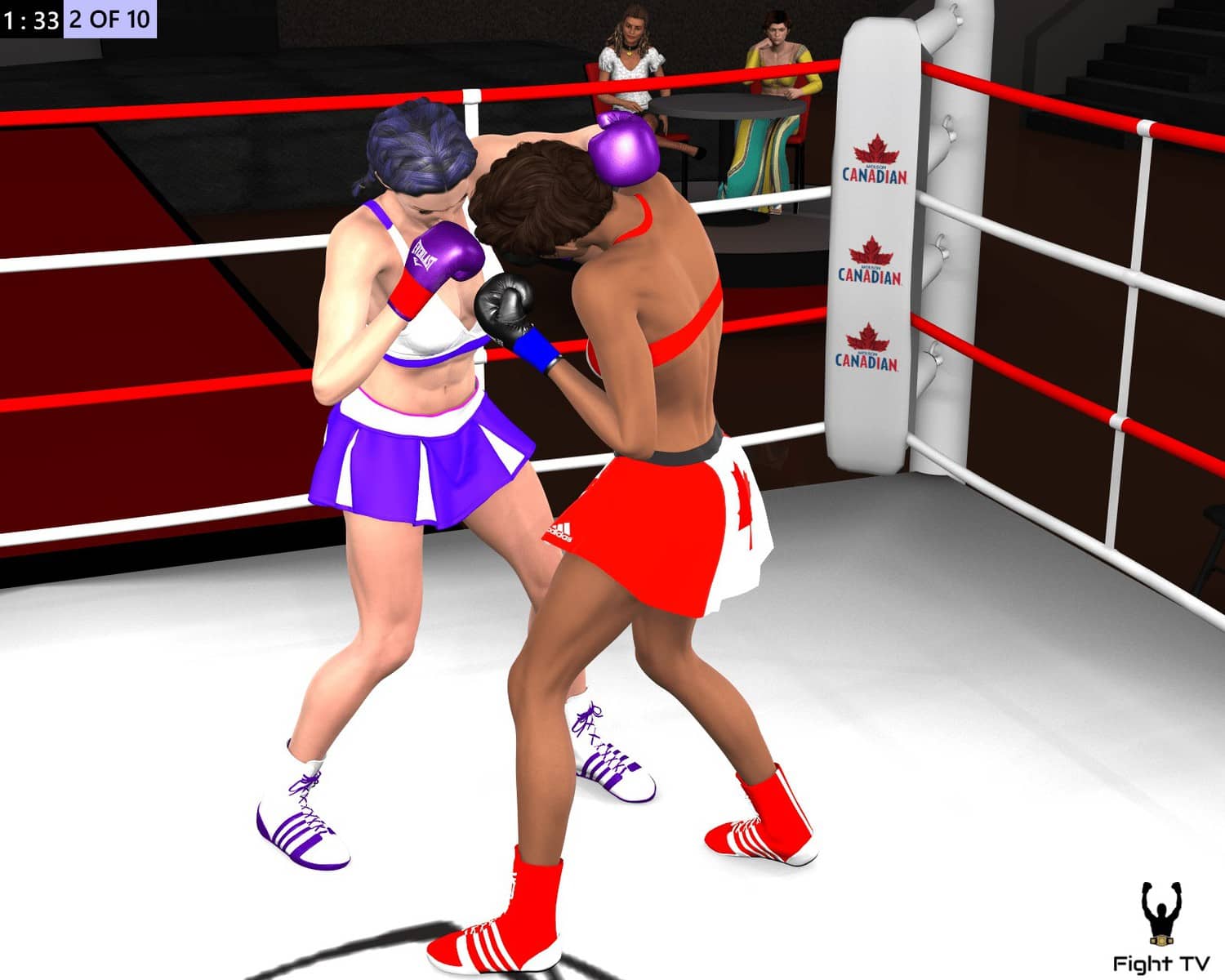 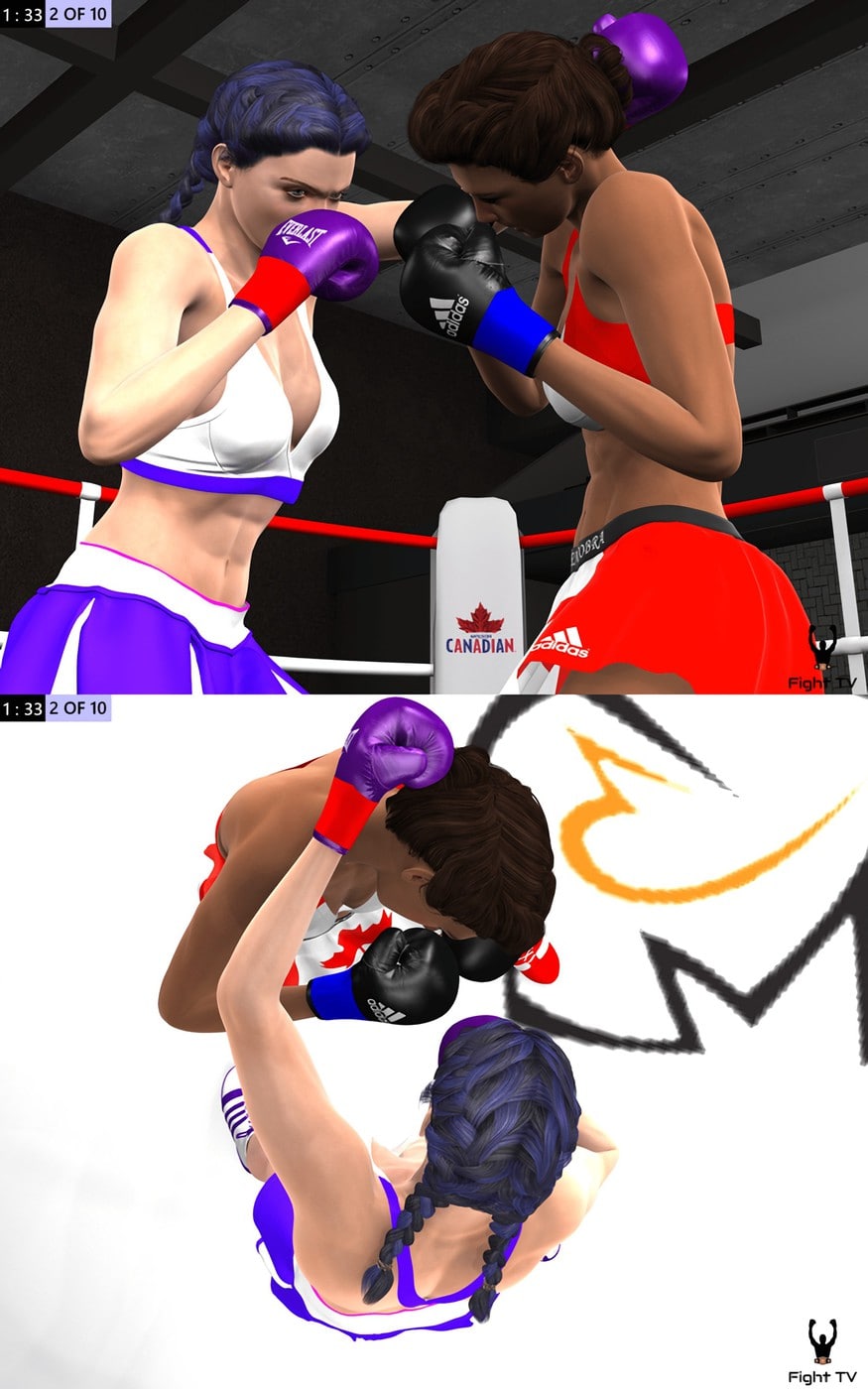 Commentator: “Heather Barker is in close, and she tries to just about take Virani’s head off with an uppercut, but Virani does well to block the Champion’s best weapon.”

Virani: I see Heather’s uppercut coming and I lean back and get my block in place, sliding my arm underneath my chin, making it impossible for the uppercut to land. Thanks for drilling that block into me, Thomas.

Heather: What the hell is this block.

Thomas: Heh, Heather loves her uppercut and it is very dangerous, but it’s not a punch that cannot be contained. Virani’s not a great in fighter, but this is the kind of move she can make to take Heather’s advantage in that area away.

Alesia: “Nice block, but I think that Heather’s uppercut was a bit predictable here. Without an element of surprise, Virani isn’t that easy to hit. At least now.”

Kayleigh: “Heather started slow in her last fight. I wonder if she needs to make more adjustments.” 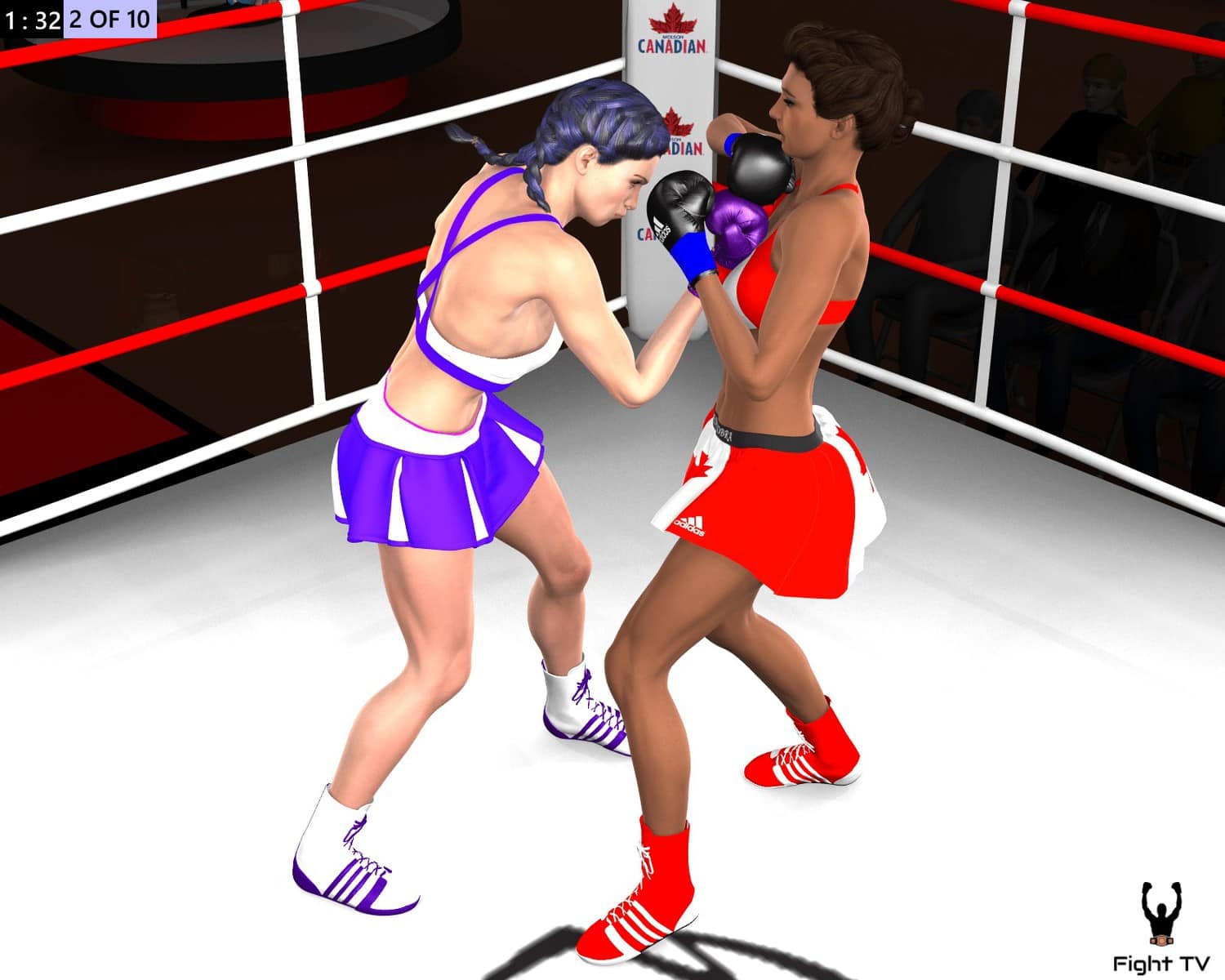 Commentator: “The two fighters are still negotiating in close quarters, and while Virani tries to tie Heather up, the Champion lands a solid right hand to the body. Not a good job by MacVicar in tying up Heather Barker and the White Swan punishes her.”

Virani: As we fight for position inside, I try to tie Heather’s arms up, but her right hand slips out and she fires a piston like right hand to my body which stings. Jesus, ref, come here and break this up! It’s boxing not wrestling!

Heather: I feel so much stronger than Virani in these close-quarters situations. If I can just get inside and get free I can do some real damage, I think.

Sylvie: “That’s the way!” This is one of the ways Heather can win – get inside, out-muscle Virani and hurt her to the body and to the head.

Alesia: “Hmmm. That’s where Heather’s uppercut would be more dangerous. When it comes from inside, you’re closer and there’s a dead angle. You can’t see it coming.” 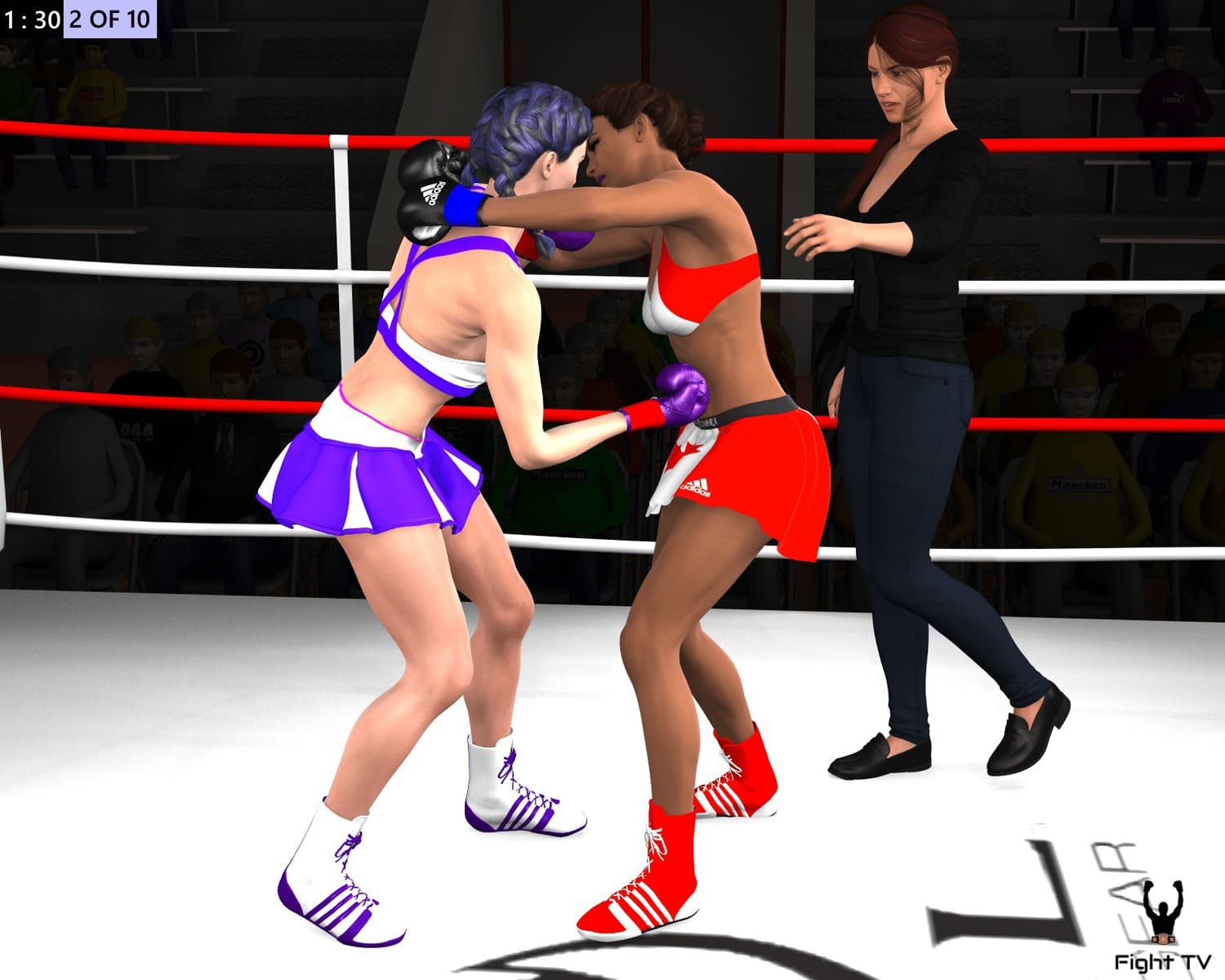 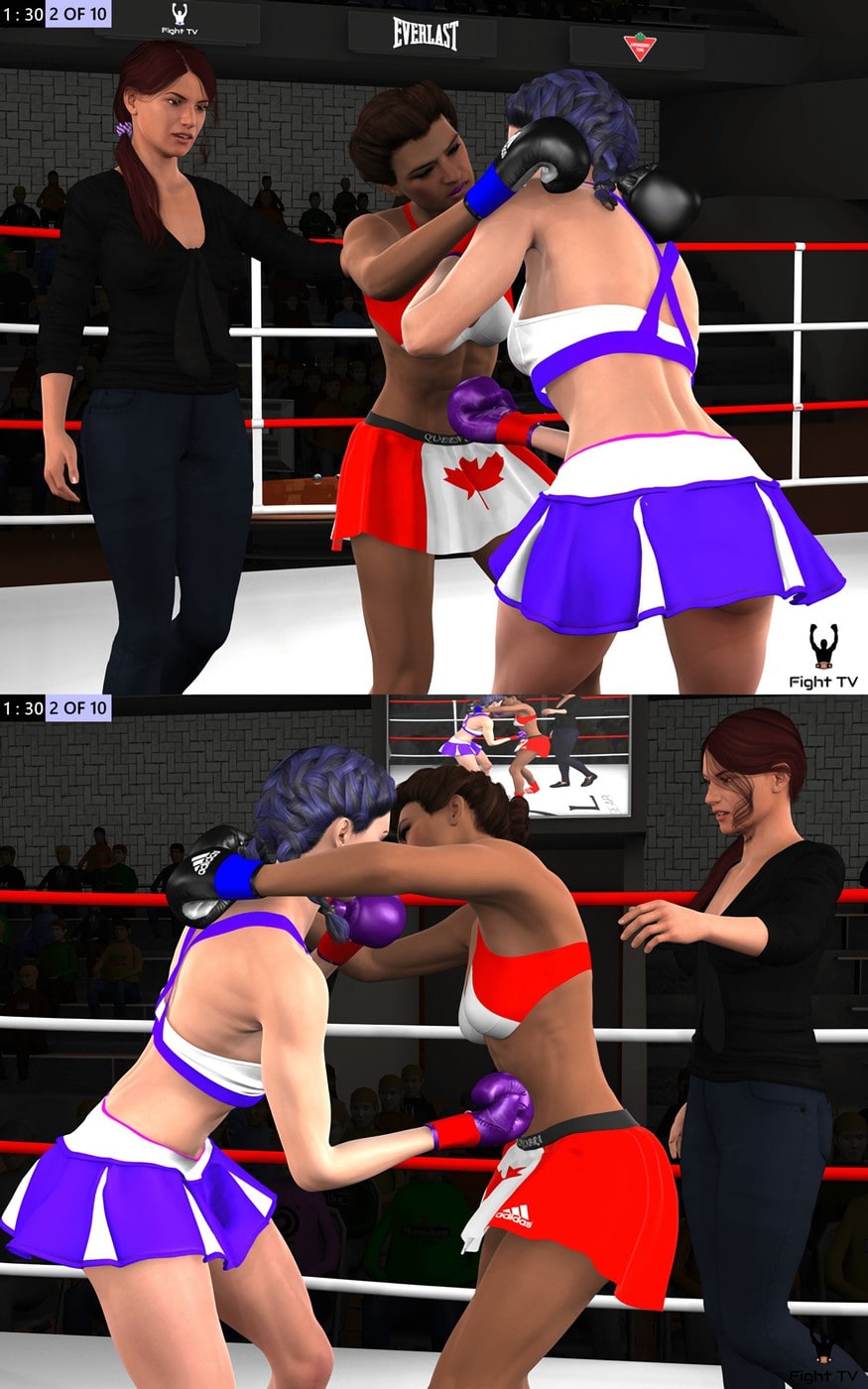 Commentator: “The challenger continues to set the pace of this fight, using a very active jab to keep Heather at the distance that she prefers. To her credit, Heather is not getting hit by a huge percentage of these jabs, but Virani is able to control the tempo of the fight. Nice tactics from The Canadian Cobra.”

Virani: Heather’s pretty elusive, but my jab being active and in her face at all times is making it hard for Heather to throw punches of her own. And she never knows when I’m going to slip my right hand behind my jab either.

Heather: I’m still sort of adjusting to Virani’s handspeed. She’s by far the fastest boxer I’ve ever faced, but perhaps this doesn’t say much about my opponents. For now though, Virani’s really doing well keeping me at bay. I need another tactic, I think.

Sylvie: Heather’s been put off by Virani’s strong start. There’s no doubt in her mind, I don’t think, but there is perhaps, some indecision.

Alesia: “Such a good start from Virani. If this were a sci-fi film, Heather would turn into a dragon in the next round. Dragon vs. Cobra. What do you think, Kayleigh?”

Kayleigh: “I think you have an overactive imagination. But I am impressed with Virani’s start, though the one thing about Virani that hasn’t changed is her chin. Not the most durable fighter around is she.”

Alesia: “Tricky one there. I think you’re aware that someone who protects their chin better don’t take as many clean hits, so they become harder to knock down. Therefore, more durable.” 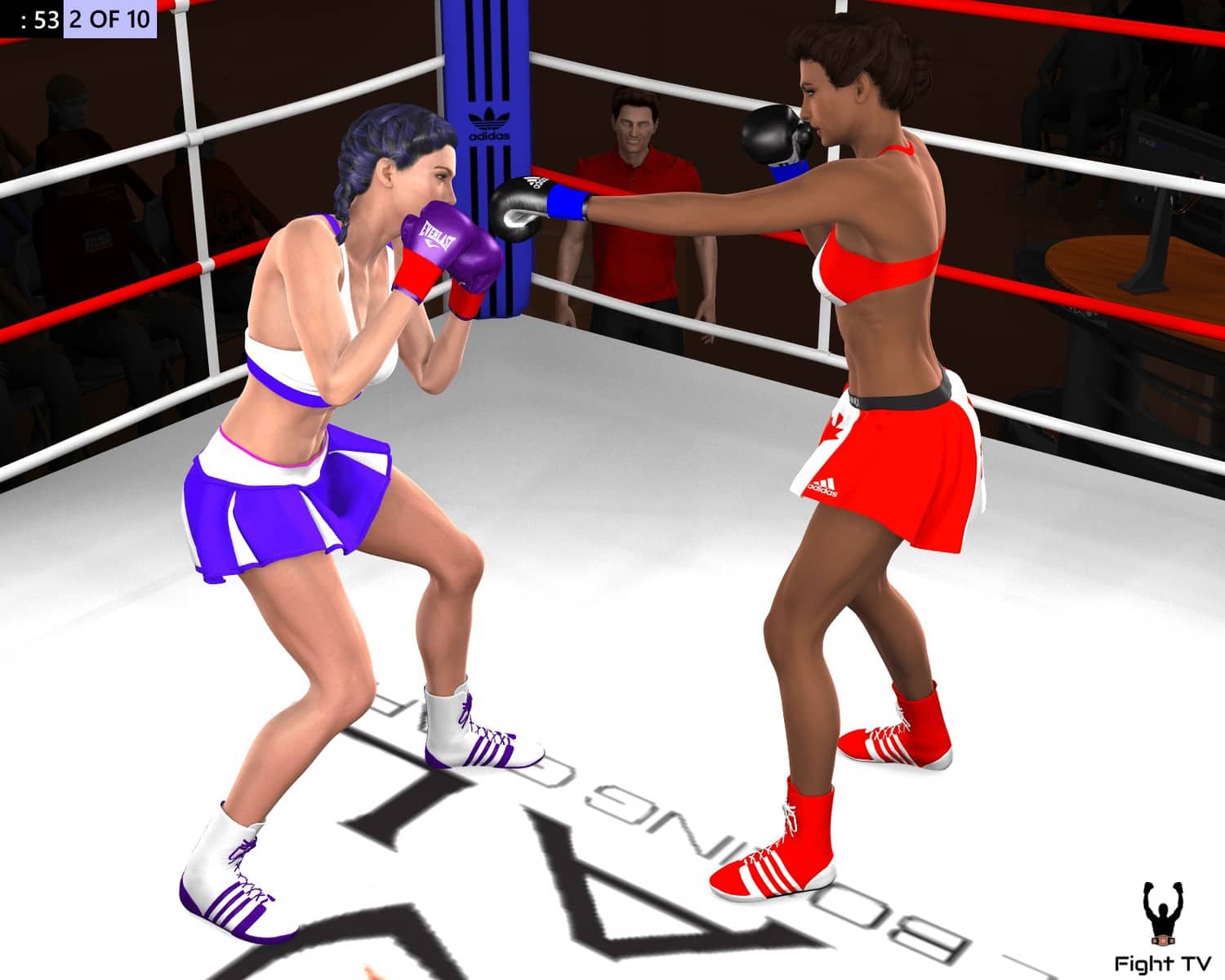 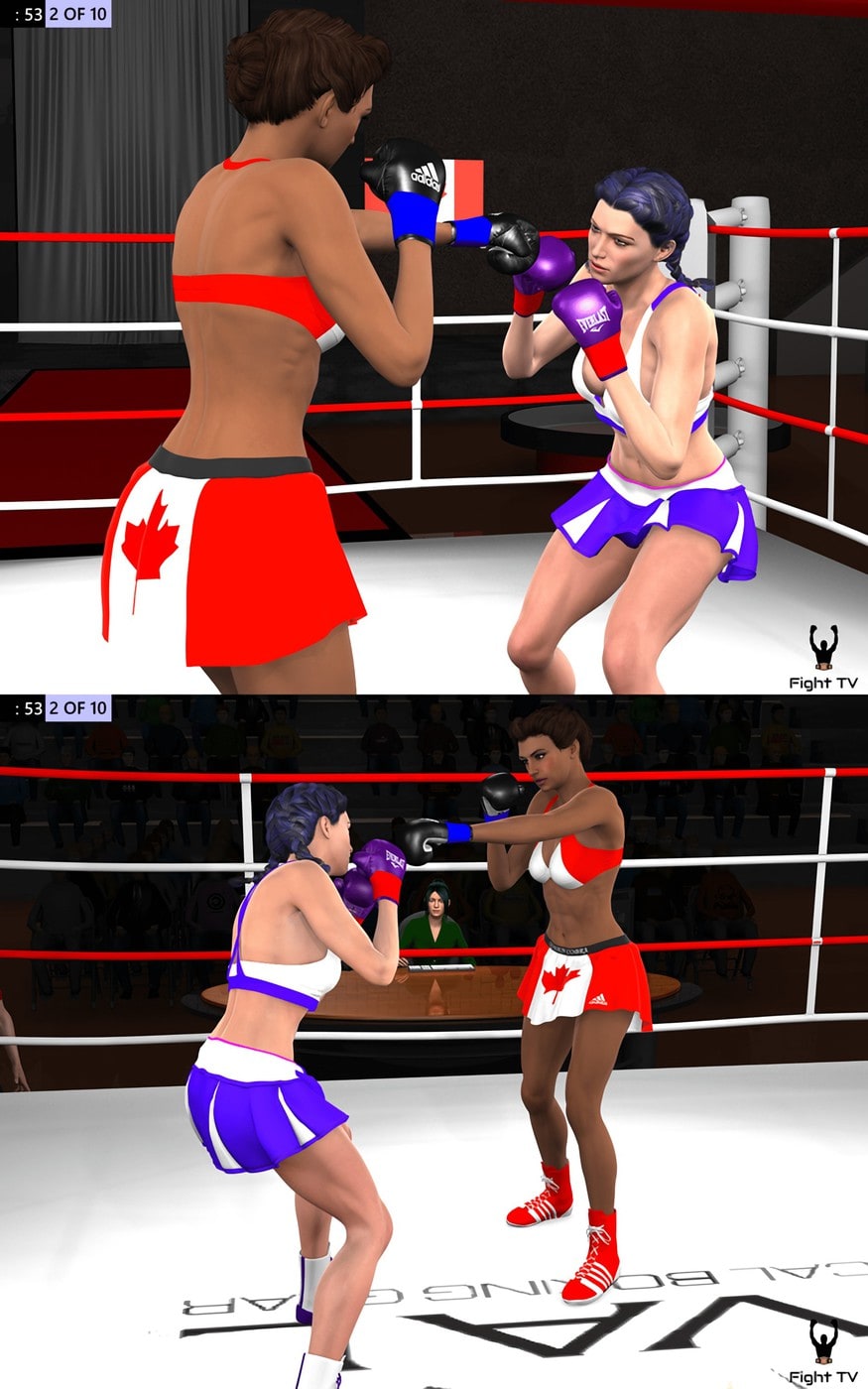 Commentator: “Heather Barker seems to be coming off second best in these exchanges…and there’s another one! Heather tried to slip in a left hook, but Virani gets there first, avoiding the left hook and connecting with a right hook at the same time. This is a very different MacVicar then the last time she fought in Canada and this is arguably the strongest start in her career.”

Virani: I don’t know if I’m in the zone, or I’ve suddenly been able to use the Force, but I seem to be able to anticipate Heather perfectly at the moment. There’s just a slight shift in Heather’s shoulders and I know she is throwing a left hook – I beat her to the punch with a right hook of my own. That felt great.

Heather: I’m continuing to pursue Virani and I think I have her rhythm sorted for a moment so I paw with a quick jab before turning into a left hook, but before my left hand can reach, Virani belts me across the jaw with a right hook. I give Virani a little nod. Okay, nice punch. 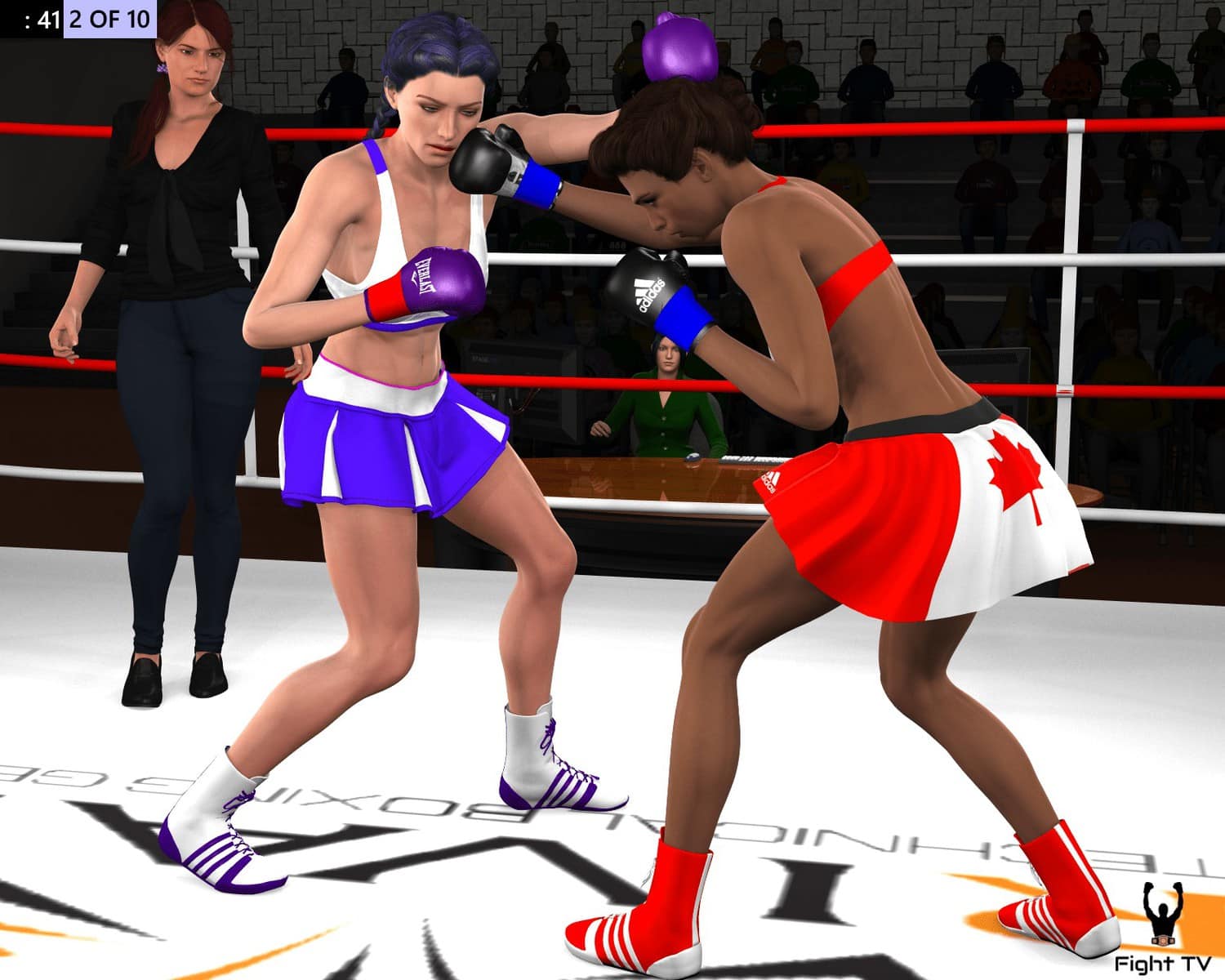 Commentator: “Virani continues the one way traffic so far in this fight. It’s still competative, but it seems like one fighter is a step ahead at all times. Heather tries to slip left, but Virani catches her with a left hook! She didn’t get everything on that one, but the left hook has been landing well for Virani here in the opening rounds.”

Sylvie: Hmmm…this is..not going well. I expected that Virani would be better than what we saw on film, but this is almost a quantum leap forward. Heather can still win, I am still confident, but the gameplan will need to be perfect.

Alesia: “Geez. Virani isn’t even making mistakes. And drilling Heather by beating her to the punch. So surprising, because Heather strikes me as someone much stronger than Prisha was. Virani must have improved exponentially in just a few months!!” 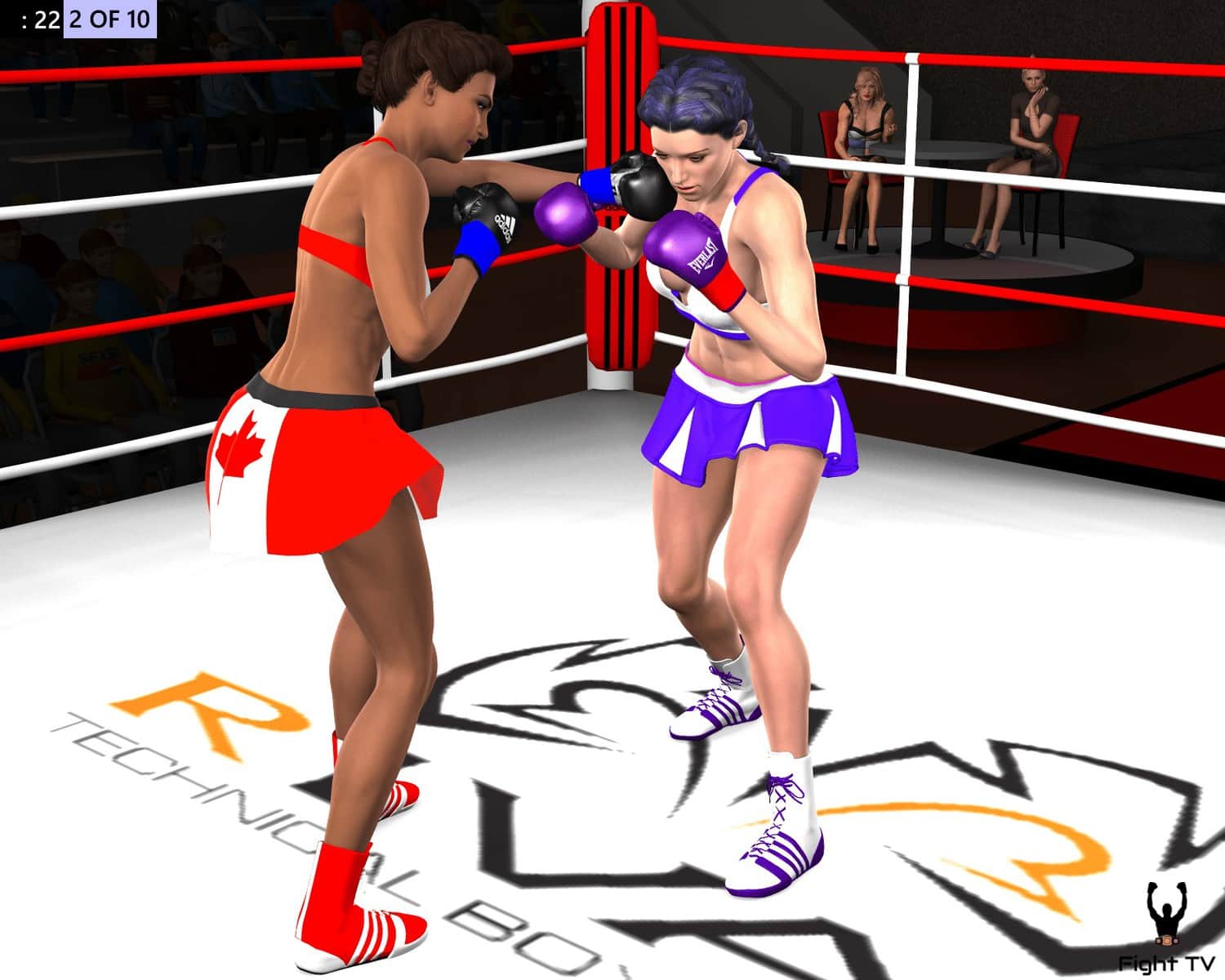 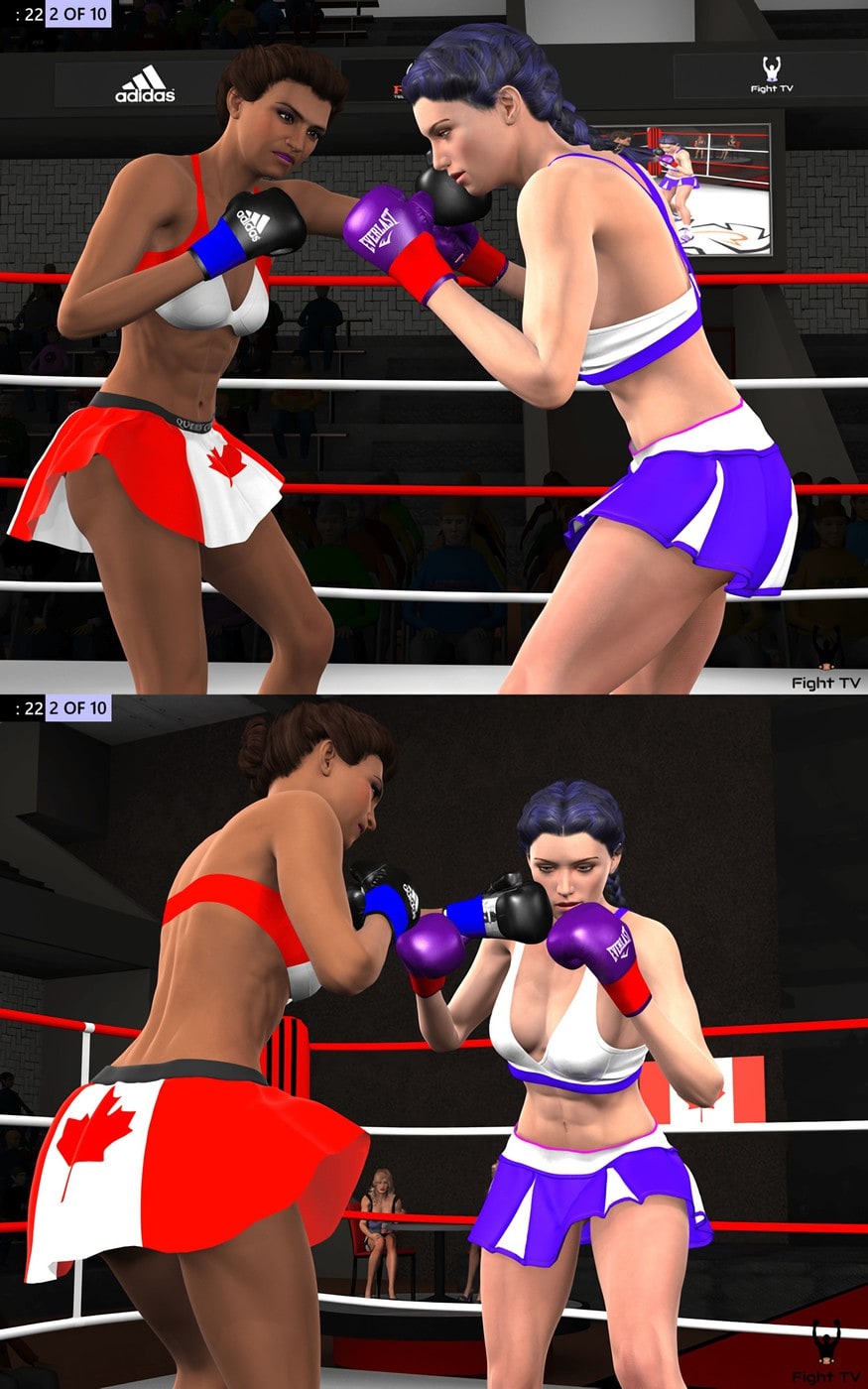 Commentator: “MacVicar ends the round with a thudding right hand to the body, probably to pay Heather back for the good body punches that Virani has taken early in this fight. One has to wonder if that new patriotic gear has unlocked Virani’s superpowers, because she is looking classy tonight.”

Virani: I know the round is ending and that will make Heather anxious to have one last go at me, but as she opens herself up to throw, I simply plant my feet and fire off a quick straight right to the body that makes Heather wince, while her return punch has barely started. After that, I simply back up and let the rest of the round expire. Two rounds in, two rounds for me.

Heather: This opening strategy has not been good enough. I need a new plan. 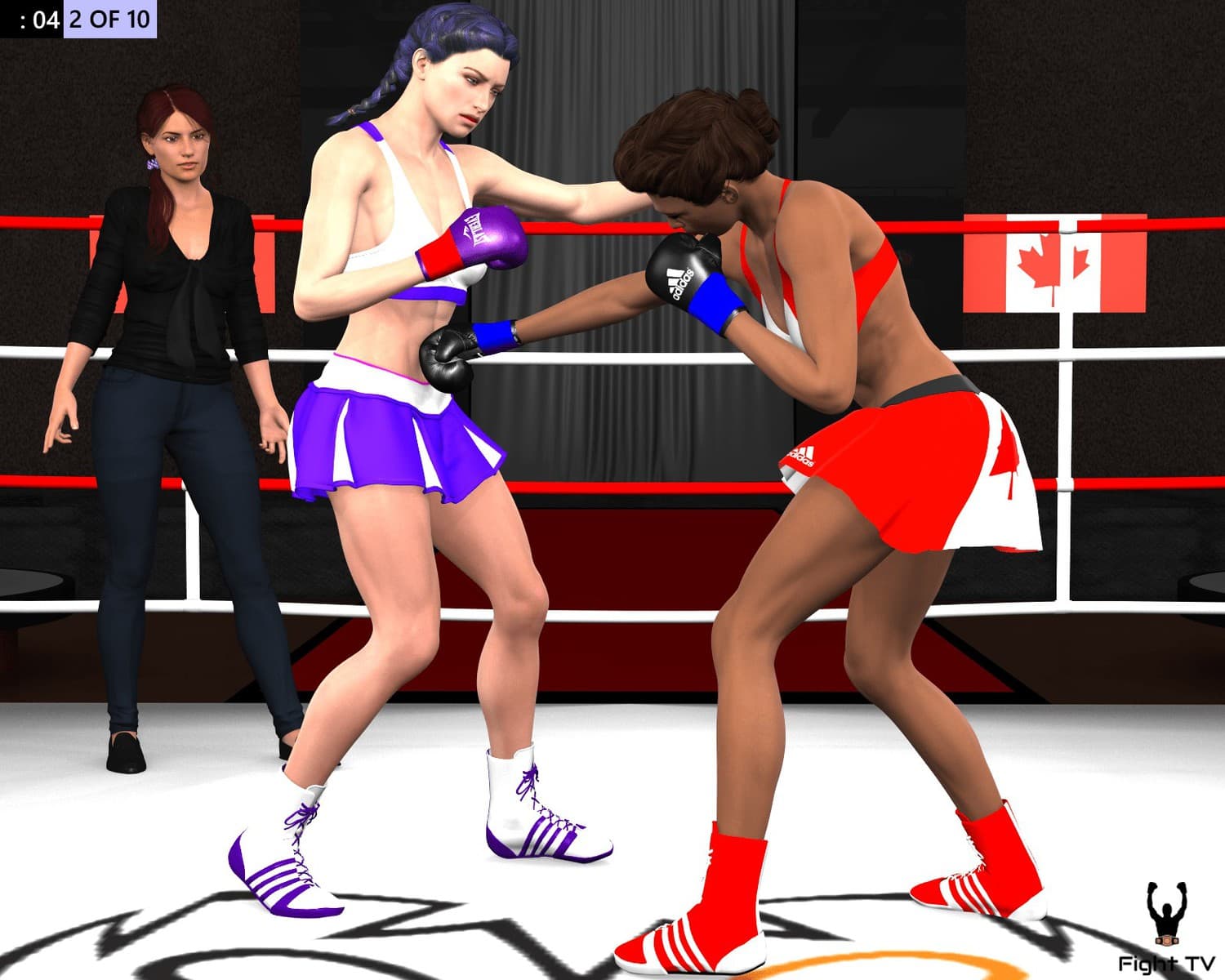 Commentator: “The fighters return to their corners, so lets go and listen in with Virani MacVicar and her coach Thomas Nagy have to say.”

Thomas: “Good round Virani. That’s two in the bank for you.”

Virani: “Thanks boss. Feeling good out there.”

Thomas: “She’s looking frustrated out there, so she might be looking to go for some more trading in the next round. Don’t oblige her. We’re smarter than her, remember?”

Virani: “I remember. Use the jab to keep the distance, pick her apart at range. Smother her when she gets in close.”

Thomas: “Keep on it and we’ll be laughing. Now breathe.”

Virani breathes deep and closes her eyes to focus. Two rounds down, Eight rounds to go.

Alesia: “So well done. She’s in total control after two rounds. You may have a very tough task on your hands in the next fight, my friend!”

Kayleigh: “I’d be ready for a rematch. Hopefully it will be as fun as the last one.” 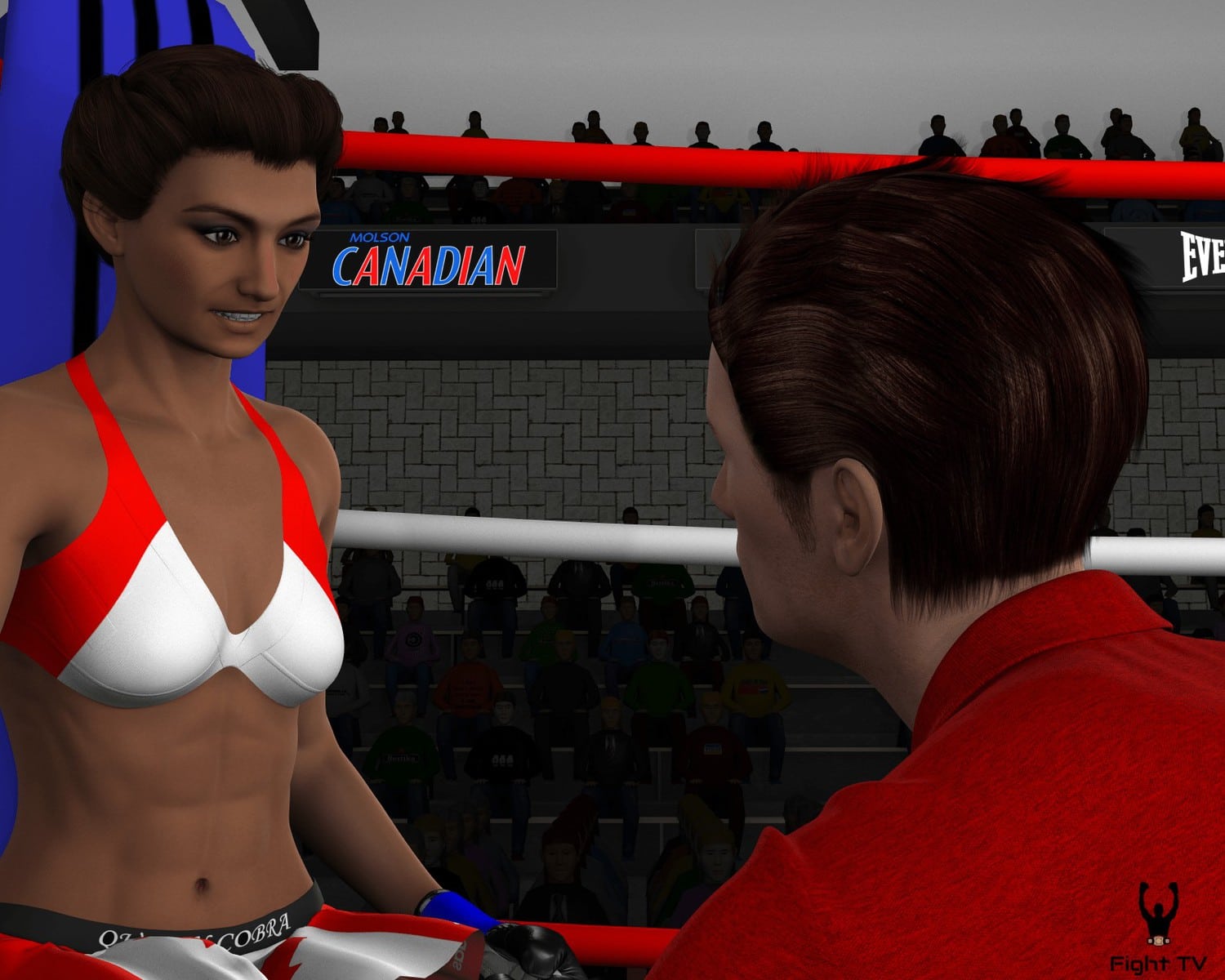 Commentator: “Reknown coach Sylvie Chouinard has her work cut out for her in the corner here early in this championship fight. Let’s listen in.”

Sylvie: “Hello, Can I speak to the Canadian Champion?”

Sylvie: “Beceause she’s sure as hell not fighting the way I told her to!”

Sylvie: “You are trying, but not committing. This is not some half-wit girl that will fall for the fakes that you are throwing! This girl will punish every mistake you make, and she’s doing a great job of it!”

Sylvie: “Our plan was to get inside and rough her up. Hurt her to the body. Now you’ve done okay landing punches to the body, but you are not getting inside!”

Heather: “Her jab is sharp and her punches are accurate…”

Sylvie: “Then you must be sharper. No indecision. Smother her punches by stepping inside of her hooks. Then push her around! Get her at the distance you want! You’re the champ! Make her earn it!”

Sylvie: “This round must be yours, Heather. Must.”

Anita: “What are they saying?” 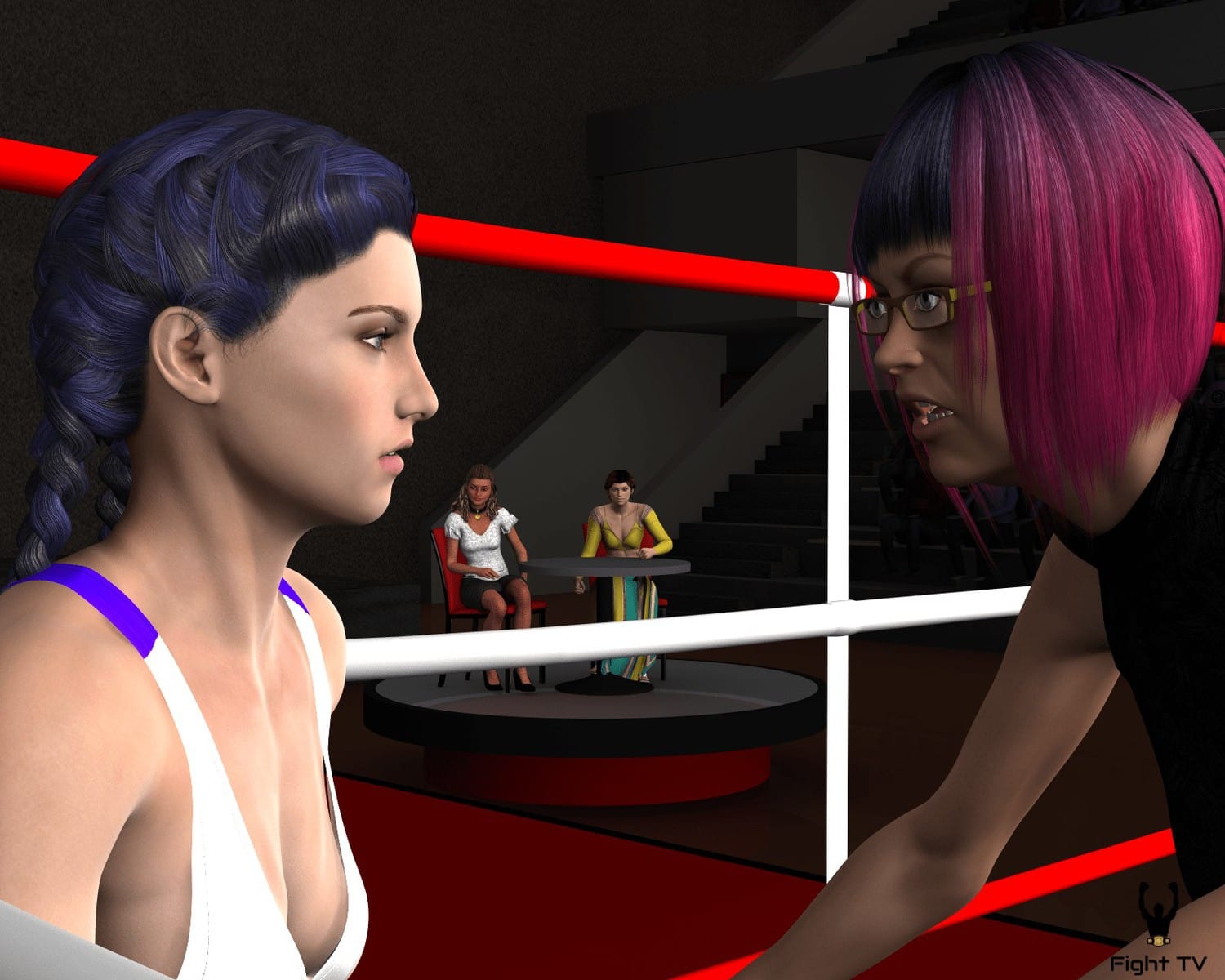 Commentator: “A round that simply does not need punch stats for someone to determine who won the round. MacVicar again was in a groove in the 2nd round, landing all the most impactful punches. Heather Barker has landed some good punches, mostly to the body, but there’s little doubt as to who was in control of the round. 2 Rounds to 0, MacVicar.”

Anita: “This is going better than I thought!”

Emma: “Don’t count out Heather. She and her coach know how to make adjustments to a gameplan, and Heather’s been scoring well to the body. Virani’s got a very toned midriff, but she’s not immune to being hurt by body punches. If Heather can slow Virani down and make her fight where the champ wants her to, this fight could turn quickly.”

Anita: “Virani’s not going to let her do that…right?”

Emma: “Virani’s got a good plan in place, but I get the feeling that it hasn’t truly been tested quite yet.”

Emma: *Laughs.* “Oh yes, that I agree with. Virani has been boxing beautifully so far. But with boxers this talented in the ring, a seizmic change can happen quickly.” 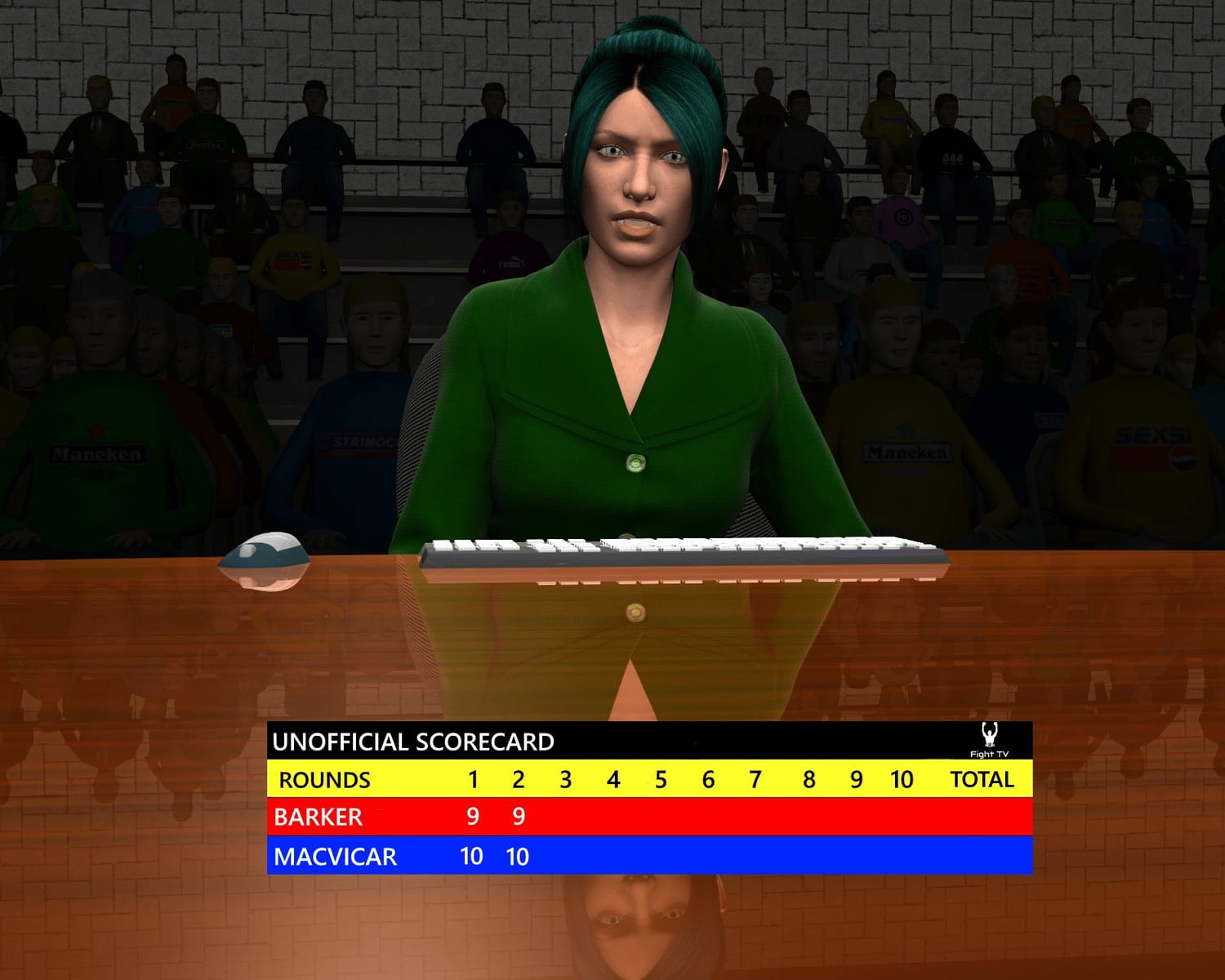 Heather Barker vs. Virani MacVicar – Round 1 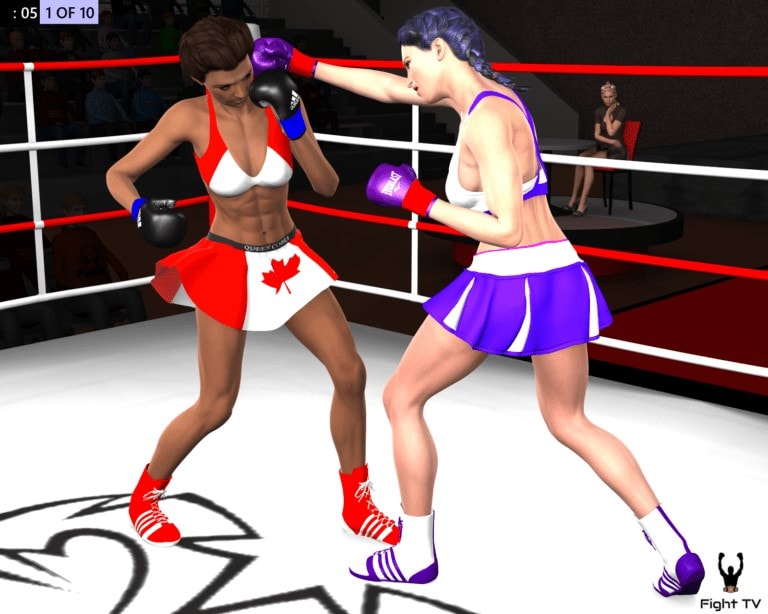 Heather Barker vs. Virani MacVicar – Round 3 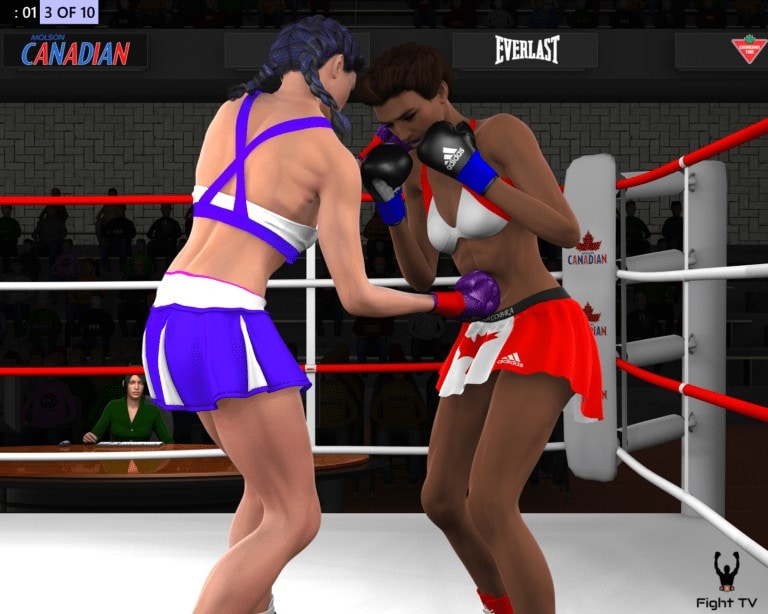