Commentator: “We return to boxing action here in the 5th round. The fight has been slowly edging towards Heather Barker and the knockdown in the last round confirmed that. It’s an uphill battle now for the Canadian Cobra to overcome the deficit on the scorecards and the punishment to the body she has taken. Heather Barker is being quite aggressive here in the early going in this round, but it is Virani who scores the first clean punch of the round, landing a very solid jab that might slow Heather down for a moment.”

Virani: No lie, my legs haven’t fully recovered from that knockdown, which is a bit concerning, though maybe its just the punches to the body that are slowing me down. I start out this round patient, which seems to flummox Heather a bit. Then when she comes forward, I change the angle and land a very solid jab. After that, I back out. This is a waiting round.

Heather: I expect Virani to come out more aggressive, to try to win the round. But she seems content to wait and stay patient. Maybe she’s still hurt! I try to go forward and get bopped with a solid jab. Okay, maybe she’s not that hurt. 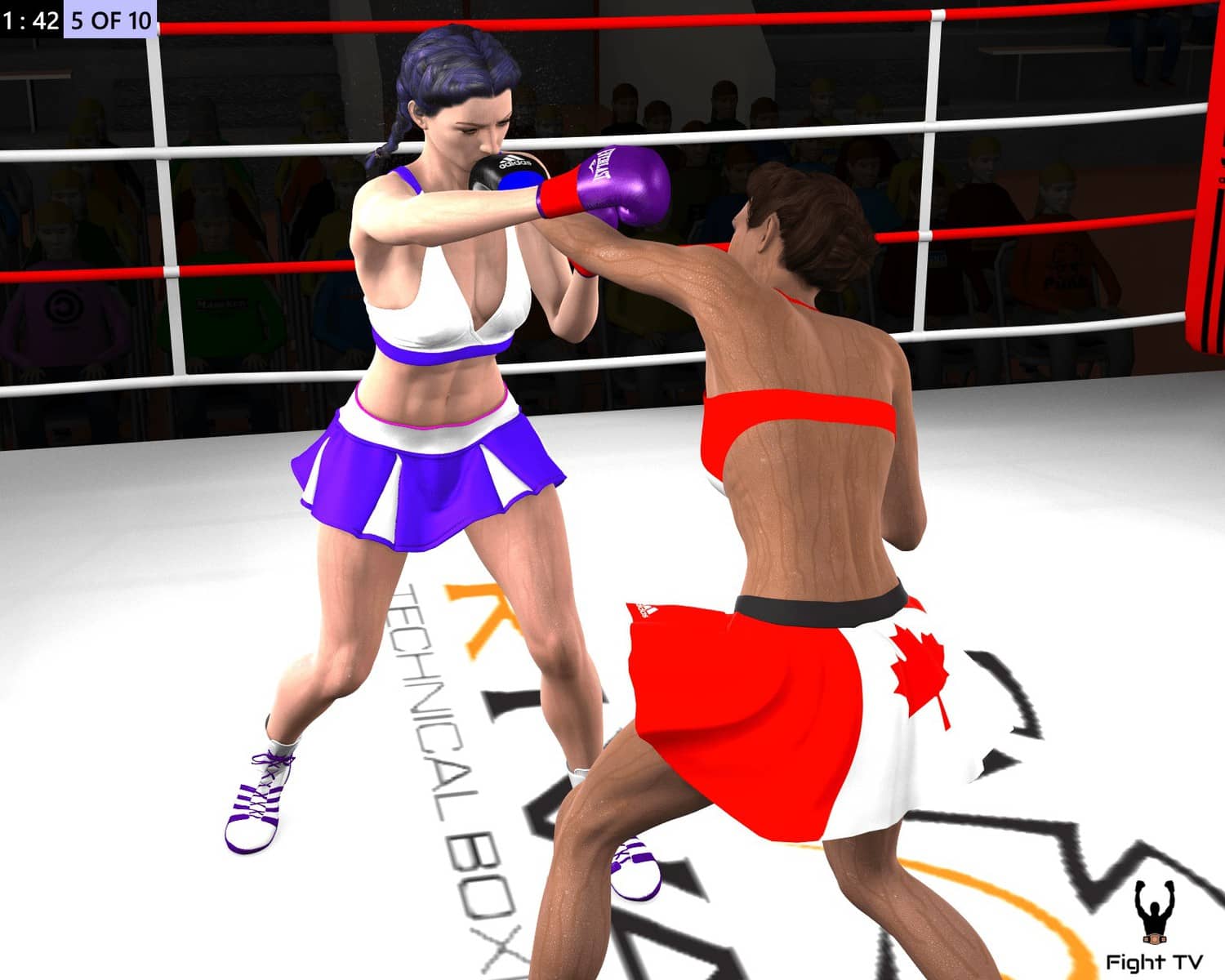 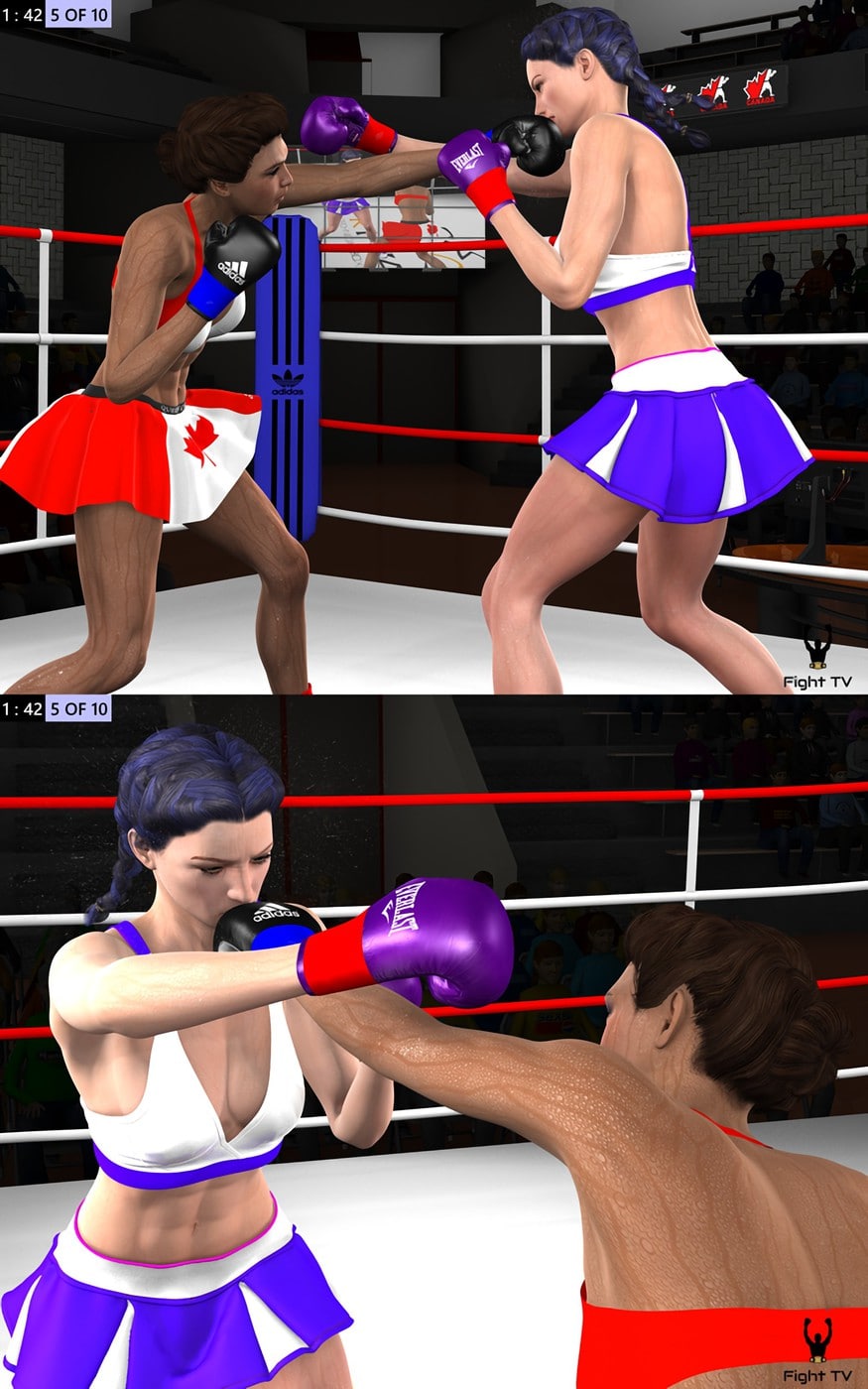 Commentator: “This is an unusually inactive MacVicar, who seems content to just wait for Barker to make the first, second and third move. That seems like a recipe for disaster, but ‘The White Swan’ is having difficulty in making her mark on her opponent. She’s winning the round…but it doesn’t feel like she’s managing to do much.”

Virani: I’m honestly just content to follow instructions from Thomas. I’m throwing little more than jabs, but I’m keeping my feet moving and not letting Heather get comfortable. I’m not scoring a lot of points, but Heather isn’t either.

Heather: This is a Virani that I’ve never seen before. She’s usually such a warrior, but she’s fighting off the back foot now, and doesn’t seem too bothered about it. It would be nice if I could really land some good shots, because maybe she’s still hurt. But she’s pretty hard to hit… 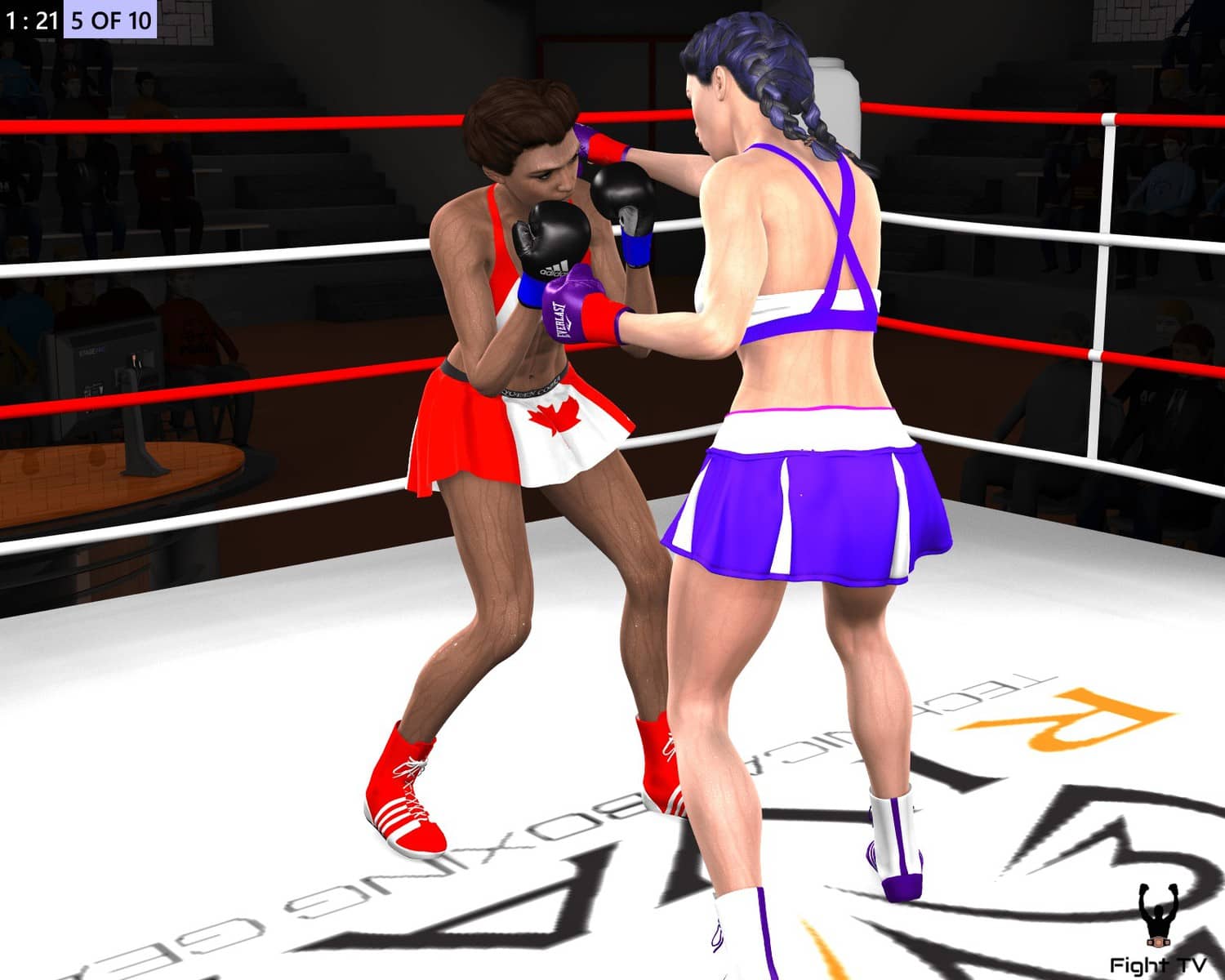 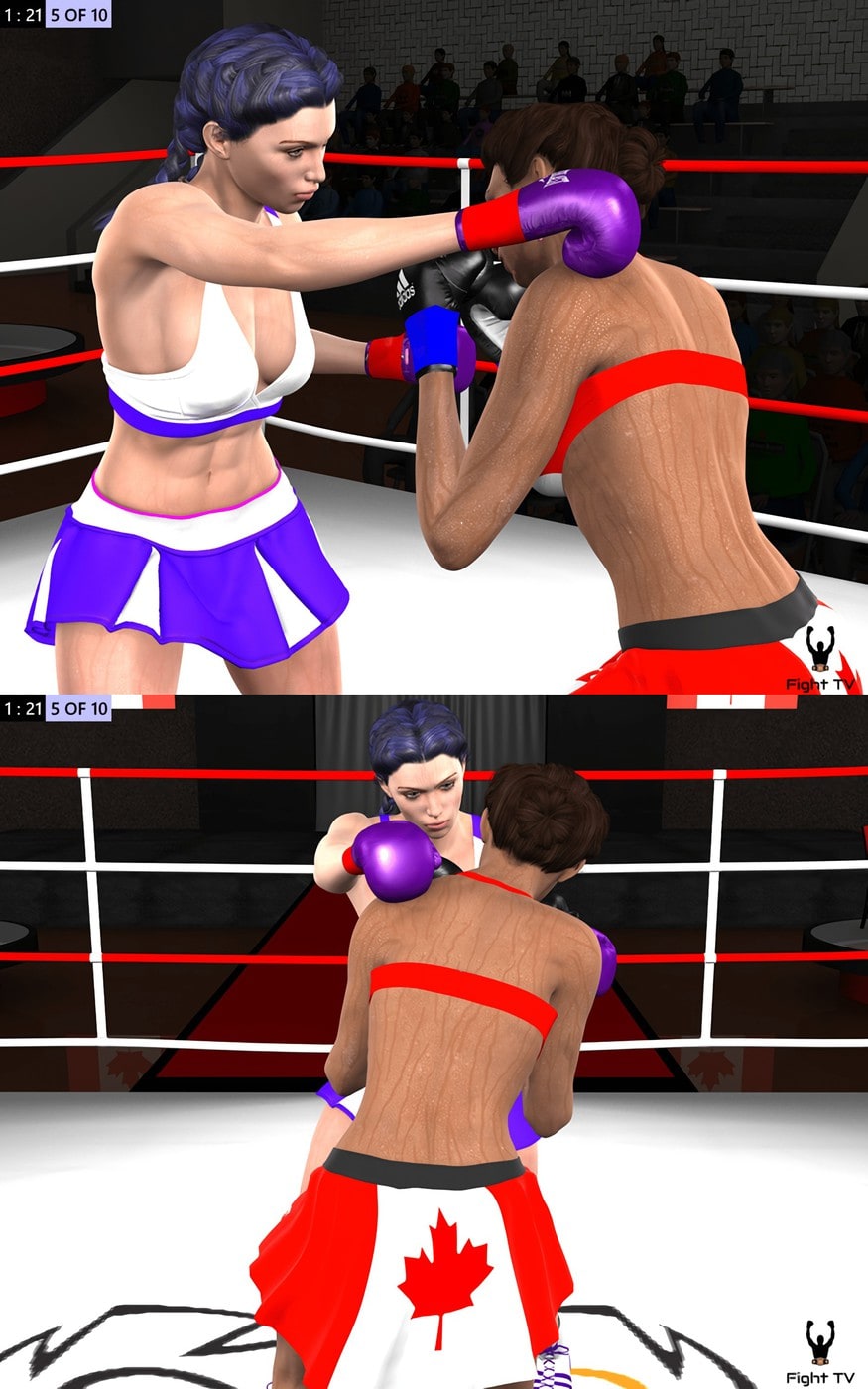 Commentator: “This strange, very action-less round continues, and it is Heather who is forcing the action. She throws a quick flurry and then tries to end with a left hook to the body, but Virani defends it excellently, keeping her guard tight and tucking her elbow down to protect her body. Basic defence, but well executed.”

Virani: I can tell Heather is getting frustrated, and I’m in a good zone defensively. I’m not getting hit by much, certainly nothing serious, so when I manage a couple of good blocks, I can feel myself getting more confident. 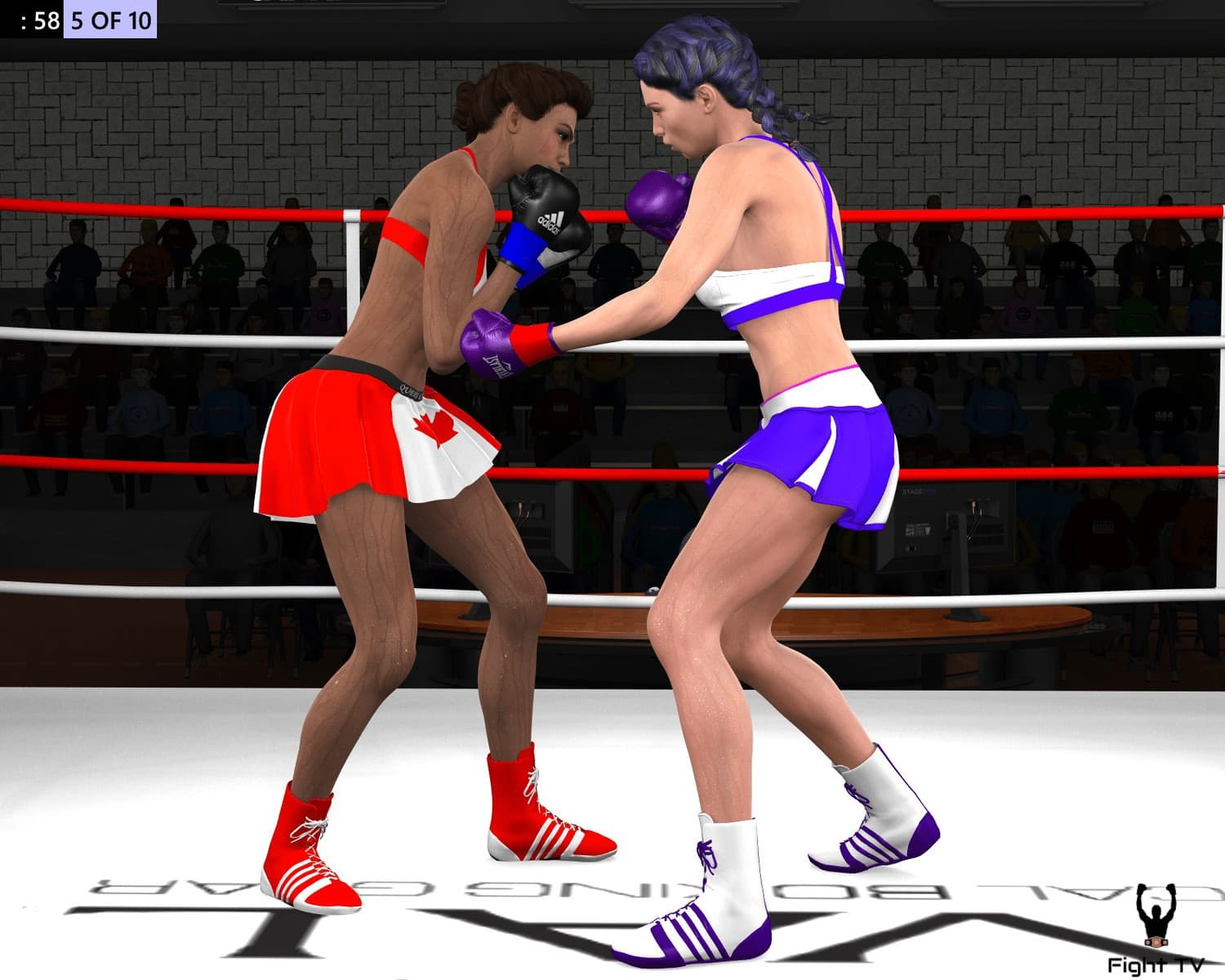 Commentator: “With Virani being passive, it was only a matter of time before Heather found the mark, and she does here, smashing a right hand through Virani’s guard with a nice right hand. That’ll hurt.”

Heather: Damn, finally I got through! I hope I crunched Virani’s nose good with that one.

Virani: Ungh…Damn, right through the guard. That hurt a bit, but my nose seems to be okay…

Sylvie: “KEEP UP THE PRESSURE!” 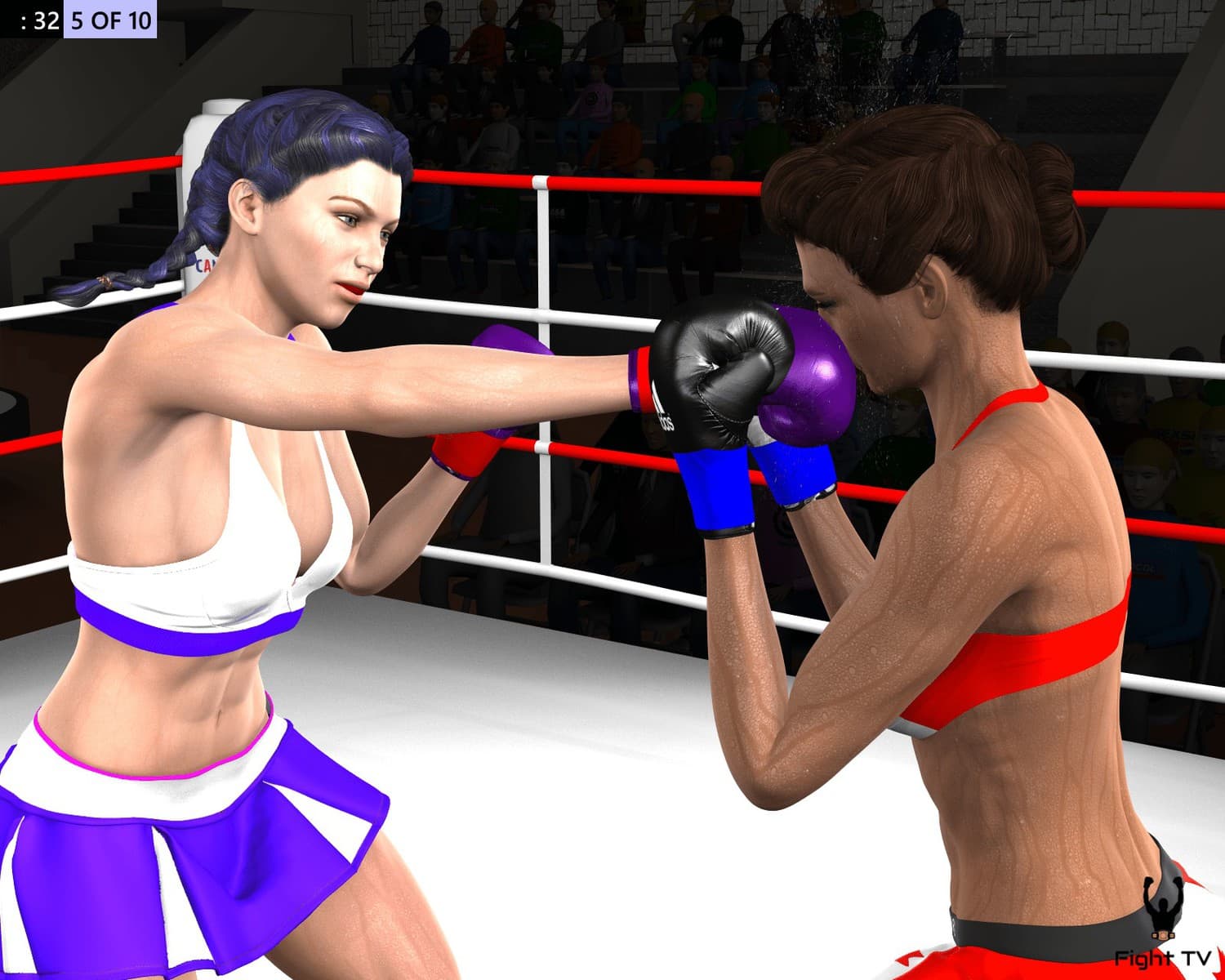 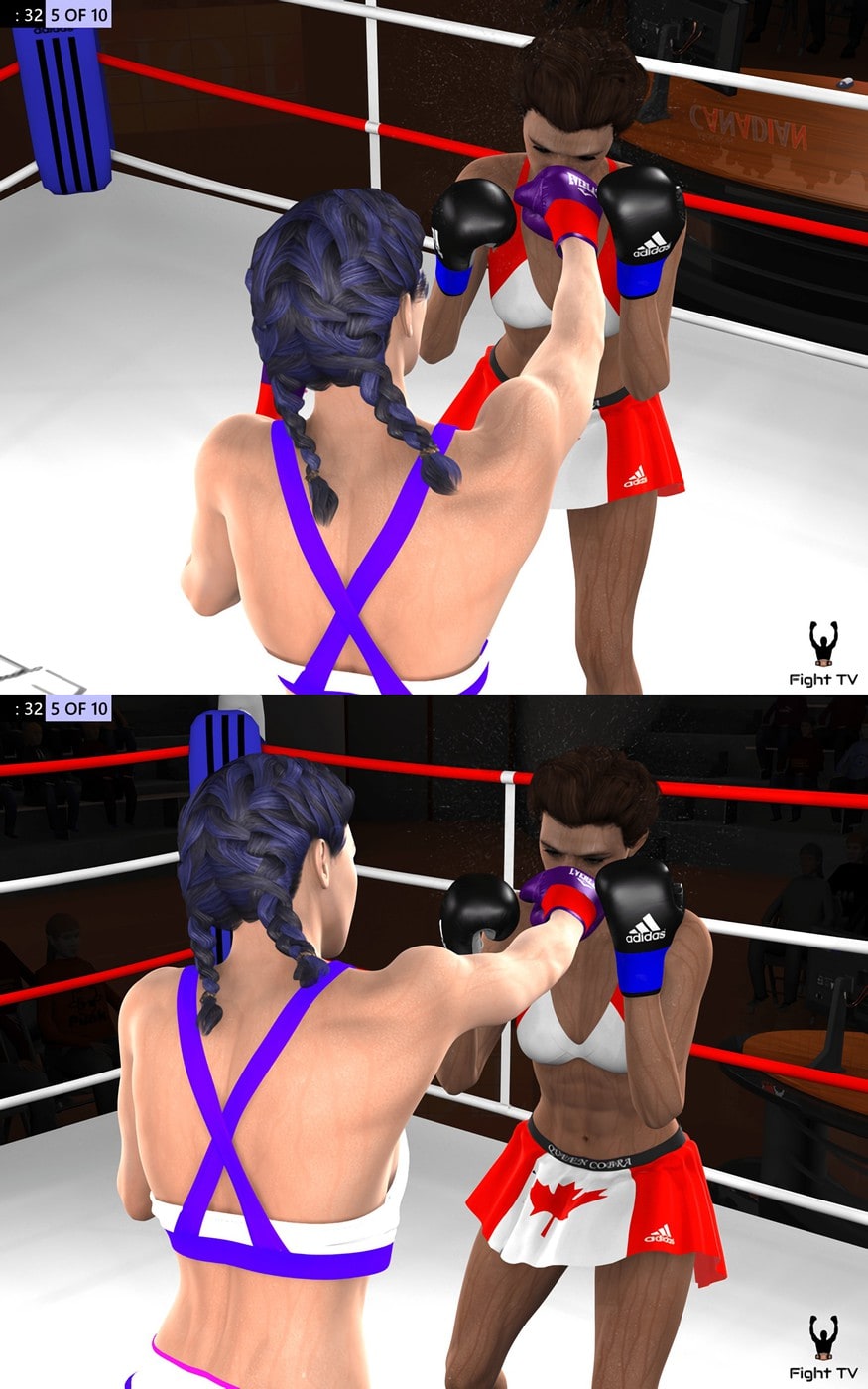 Commentator: “Heather Barker is having a bit of a struggle as Virani has changed her gameplan, and her frustration seems to be growing, as Heather throws right hand after right hand with basically the same results. Virani has been down, but it seems like she might have a little bit of a mental edge at the moment.”

Virani: Heather is throwing more and more, but landing a tiny percentage of her punches. It seems like she’s losing her head, almost.

Heather: God damn it! Virani is giving me this round, but I can’t freaking hit her and hurt her!

Sylvie: “Go to the body, Heather!” Virani’s defence has improved, but Heather’s frustrations are making it easy for her. 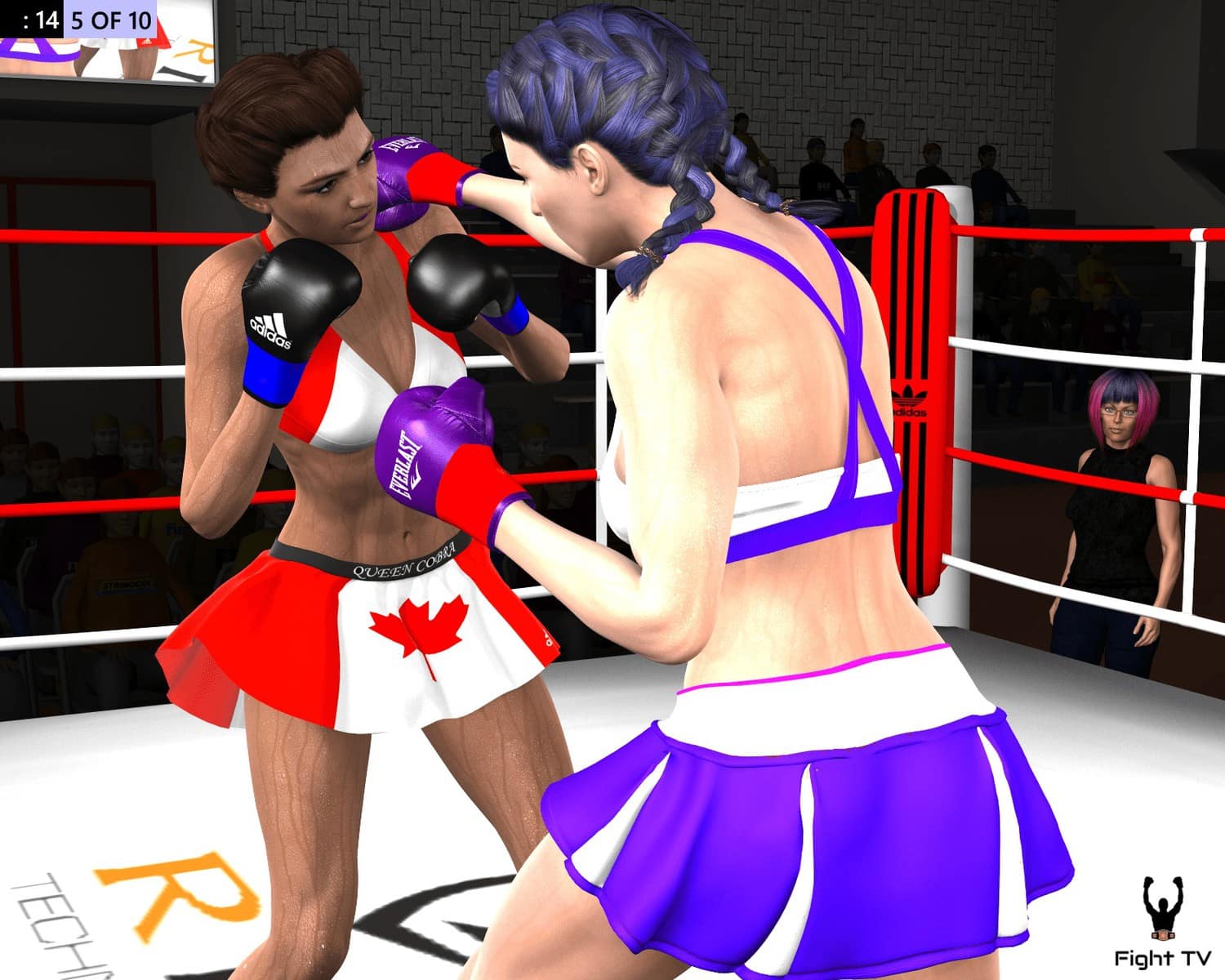 Commentator: “Heather Barker cuts a frustrated figure in the ring at the moment, not able to land the punches that she wants…and now that punch strays quite low at the bell! Was that frustration emerging or just an accident? Either way, it’s not going to make a difference as the round ends right afterwards.”

Virani: OOF…I’m not used to getting hit there…and that hurts…below the belt though, I think. The bell saves me from any further punishment because if that hadn’t been called a foul, I’d be in trouble.

Heather: God damn this round. I want to hurt this girl, who is doing nothing but moving around. I’ve heard of sticking and moving, but Virani is only doing the latter half of that. It’s frustrating as hell! I then see an opening and throw a right hand, but Virani’s arm deflects it downward and it goes a little lower than I intended. It hurts her. Good. 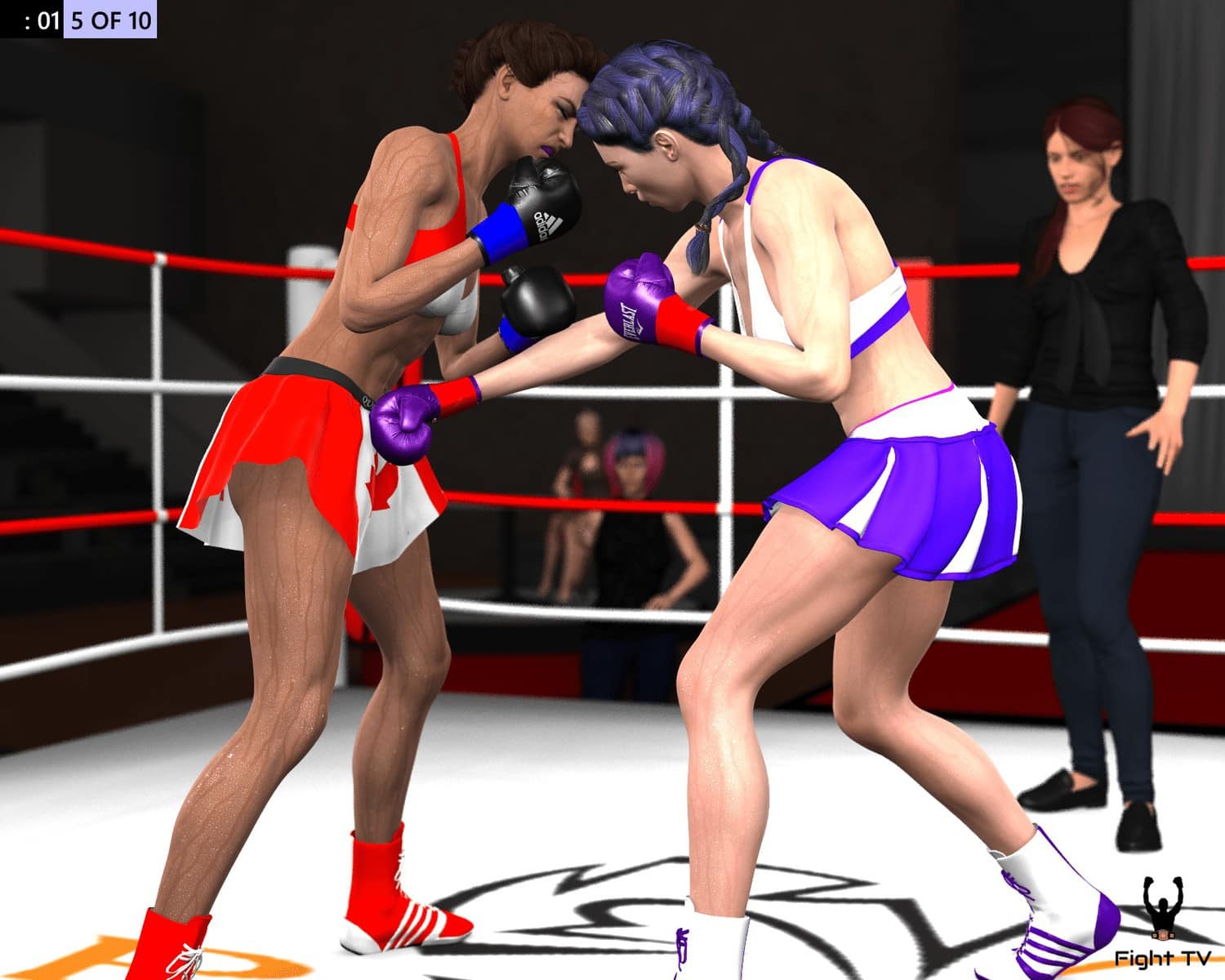 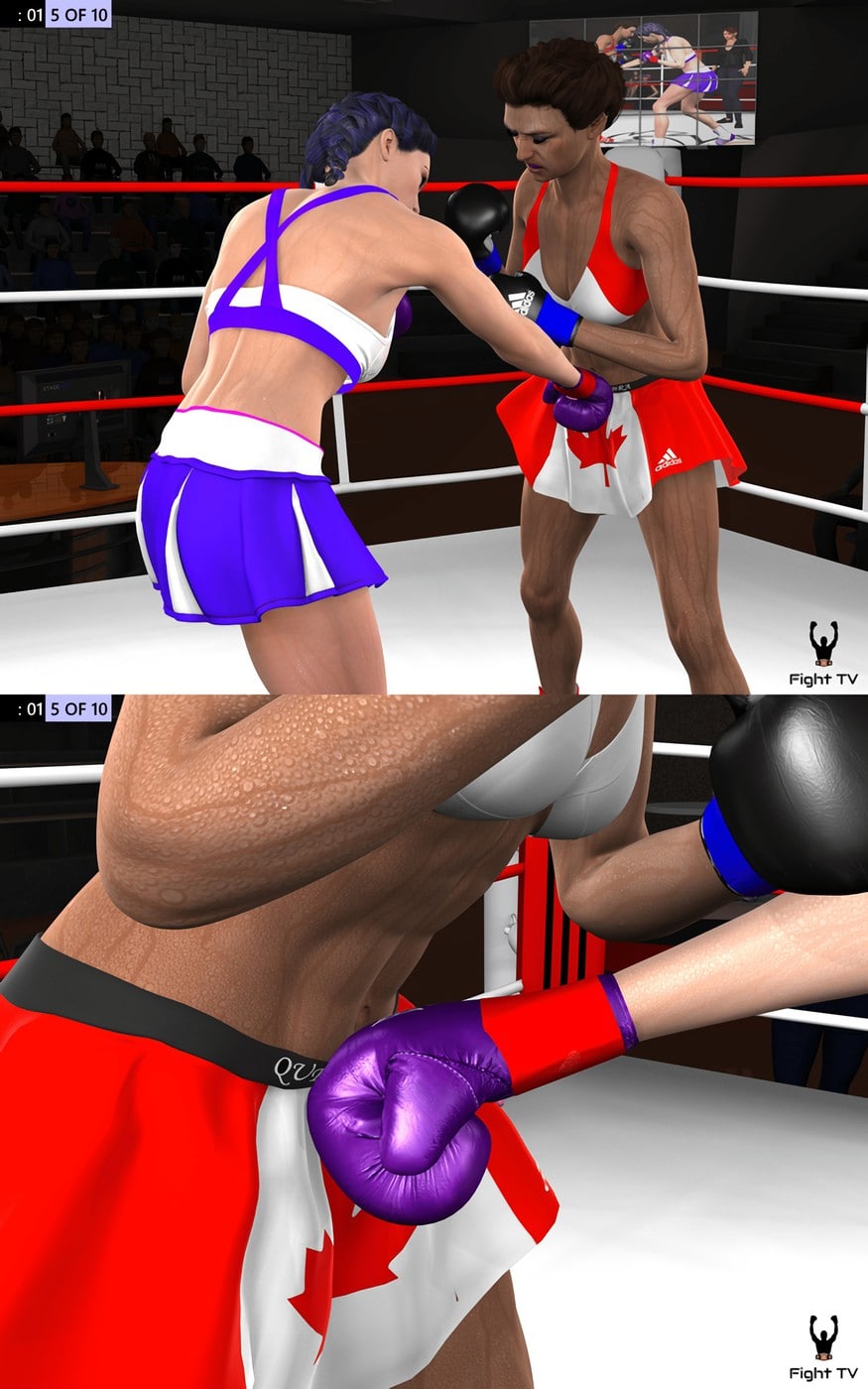 Commentator: “Looks like referee will be having a quick word with the champion as the break begins…”

Jennifer: “Hey! I’m giving you a warning about keeping the punches up, okay? One more like that and I’m taking a point away.”

Heather: “That was on the line, ref!”

Jennifer: “I know what I saw.”

Sylvie: “Thank you for the warning. Heather, take a seat.”

Heather sits and glares furiously at the retreating referee

Sylvie: “Okay, so the ref is being a bit of a bitch, but that’s okay. Ignore her. You’re up a couple of round here, and we should be cruising. Virani’s going to try to come back in this round, so expect resistance, okay?”

Heather: “If she stands in front of me, I’ll knock her out!”

Sylvie: “You’re not a one punch slugger. Use your skills – you can beat her.” 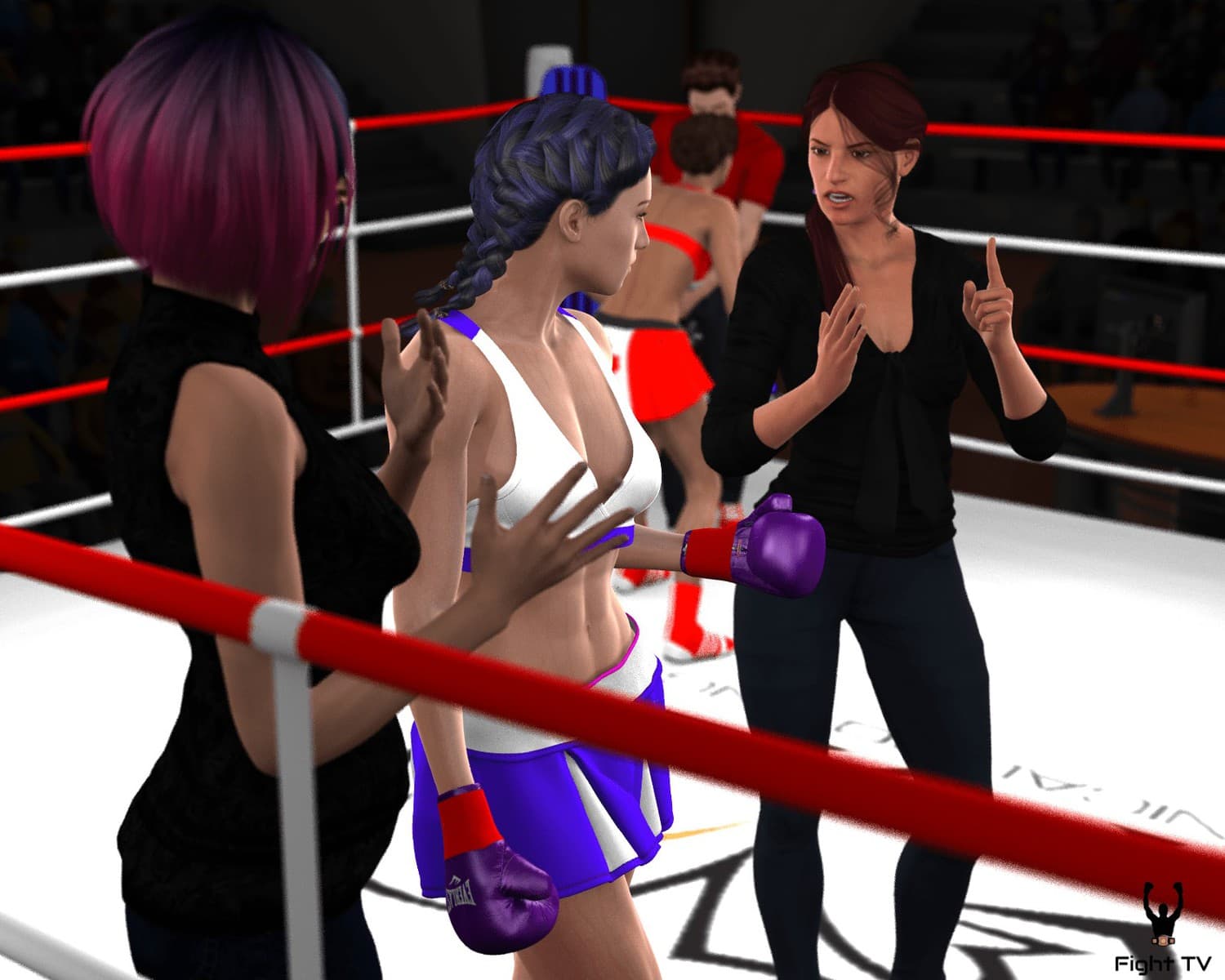 Commentator: “Virani still seems to be suffering from that last second punch from Heather Barker. Luckily, she gets the minute to recover.”

Thomas: “Hey, you okay? That last punch was low.”

Virani: “Yeah that one hurt.”

Thomas: “Okay, sit. That round went pretty well, she wasted a lot of energy that round and you made her miss a lot. She’s frustated.”

Virani: “Yup, I can almost hear her growling.”

Thomas: “Okay, this needs to be your round. She’s going to be aggressive because she is frustated. Now’s the time to nail her. Active jab, and then come in with the left hook, either to start off combinations or finish them, got it?”

Thomas thinks: I’m staying positive here, but how much damage has Virani taken? If Heather goes to the body more, will that be it? 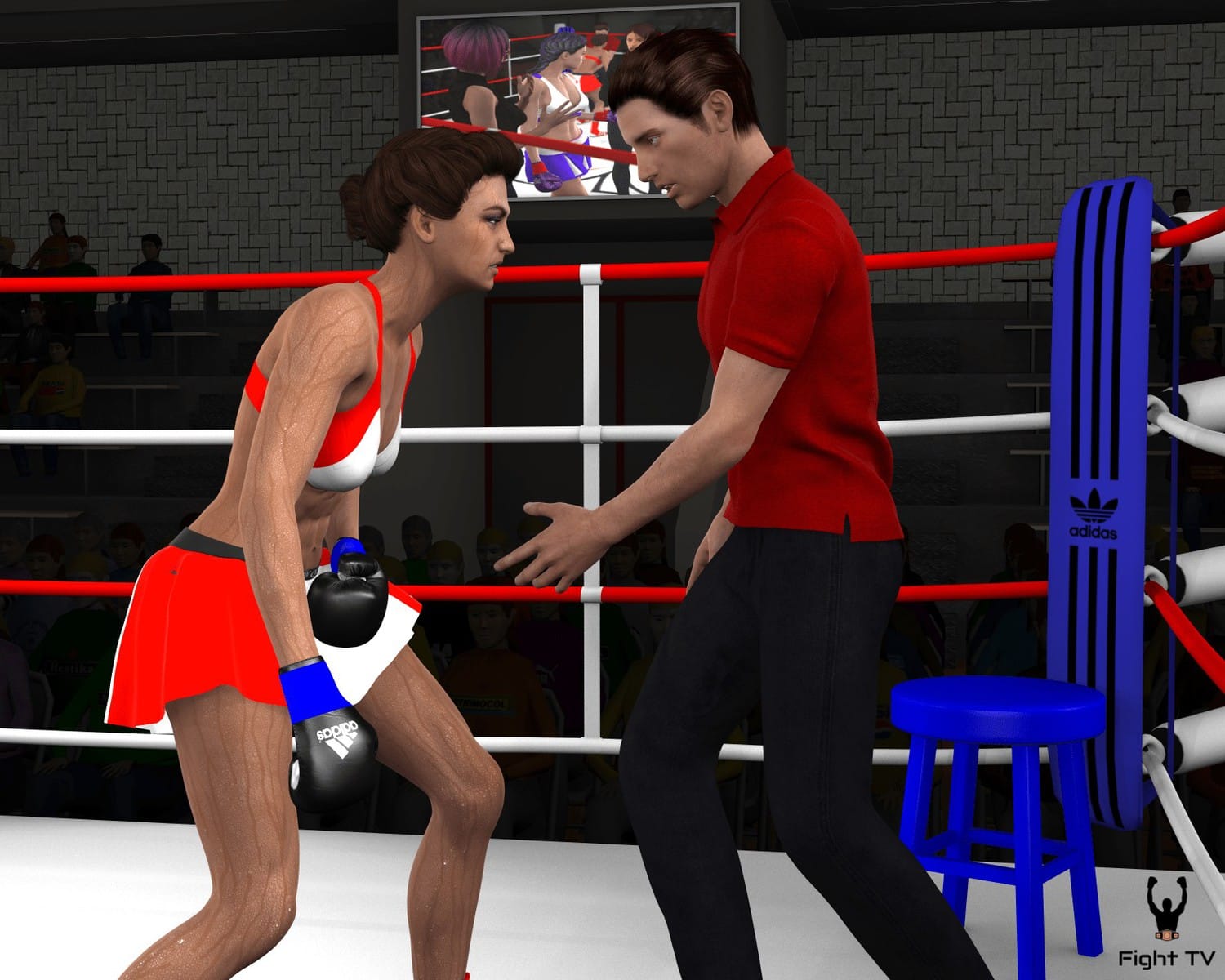 Commentator: “Smooth sailing for Heather in the middle rounds as she holds a decisive edge in this fight on my scorecard. The champion has been warned for hitting low, and a further foul could be a one point deduction. The champion seems very strong at the moment, can she continue to build her lead? 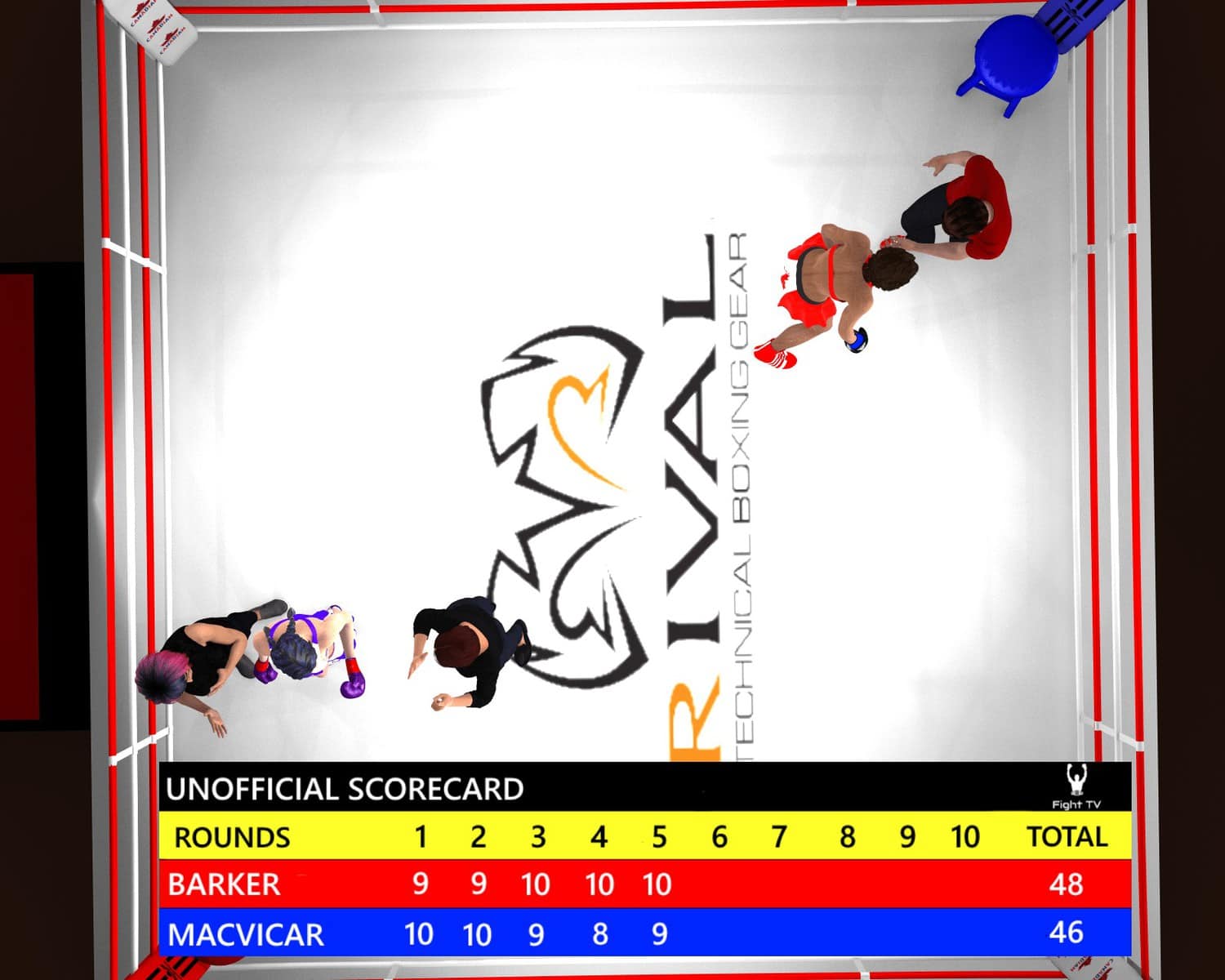 Heather Barker vs. Virani MacVicar – Round 4 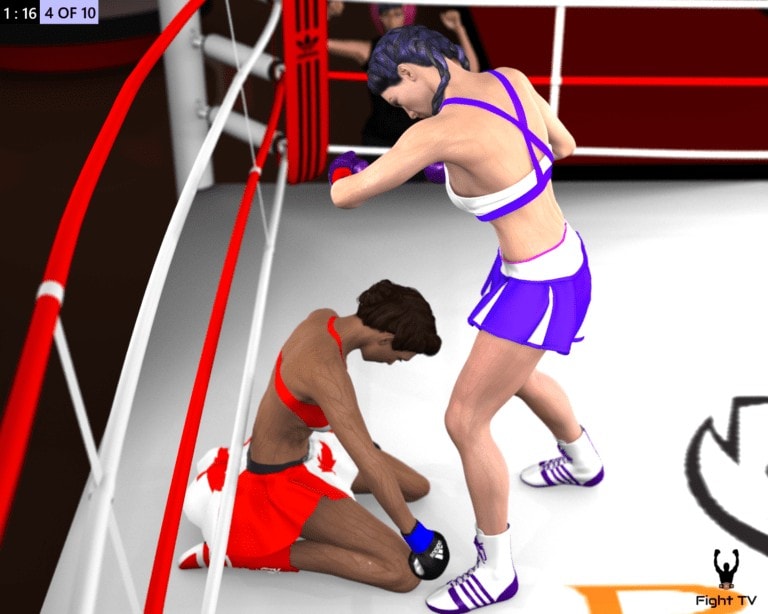 Heather Barker vs. Virani MacVicar – Round 6 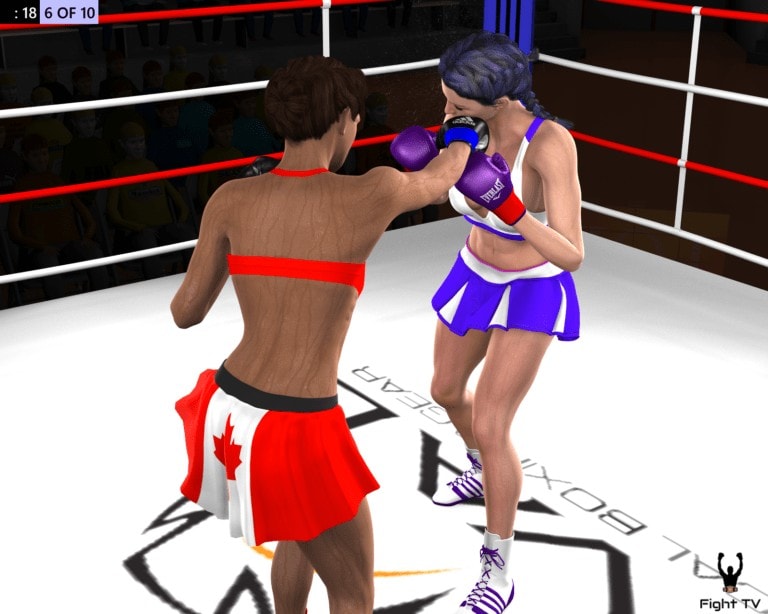