Commentator: Early on in this round the first big punch of the 6th round goes to Virani as she beats Heather to the punch, landing a solid right hook that lands very nicely on Heather’s face. Heather might have forgotten the taste of Virani’s leather after last round, but she is reintroducing the taste right away in this round.

Heather: Oof. I shouldn’t have thrown that uppercut. Too soon. Gotta be more careful. 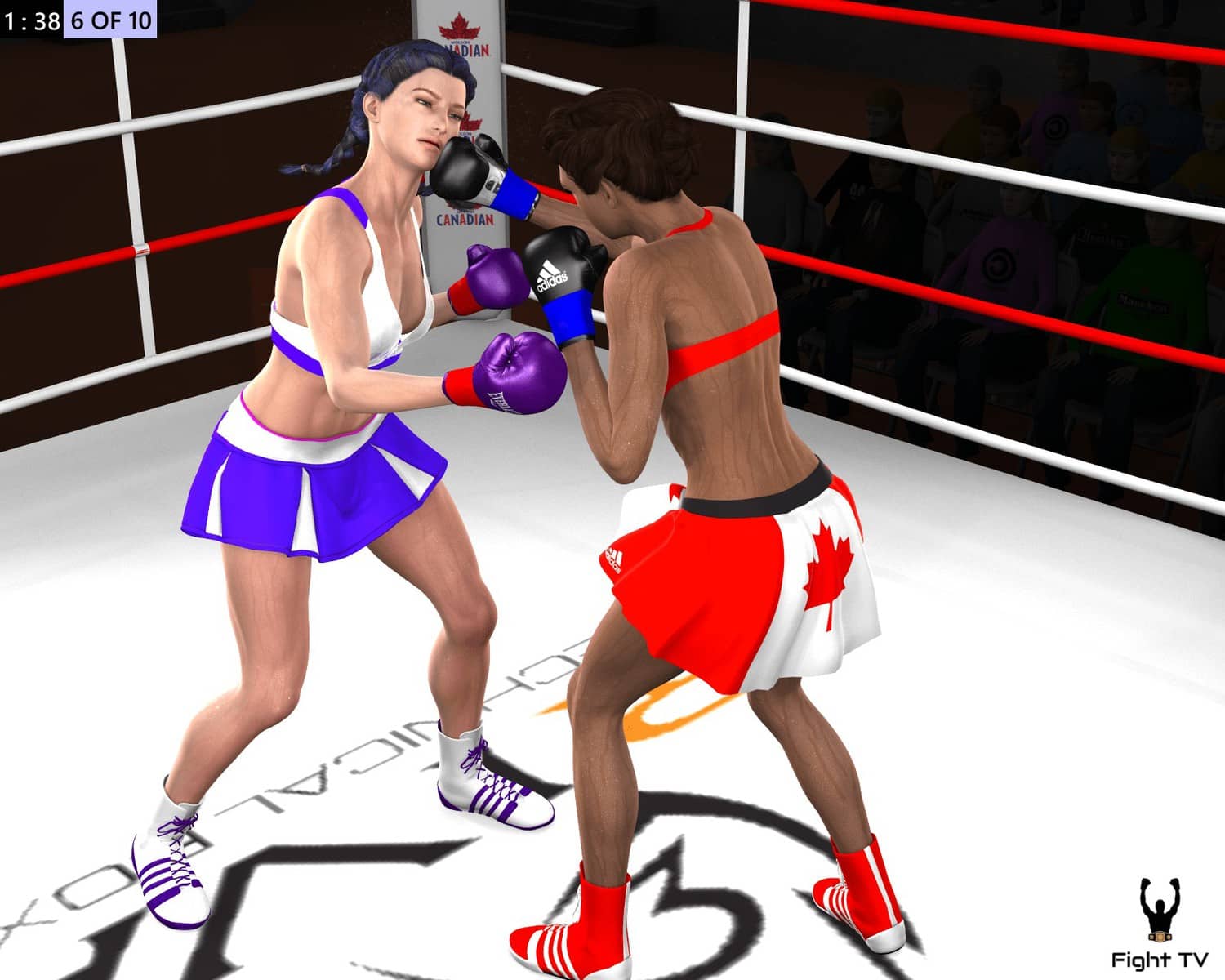 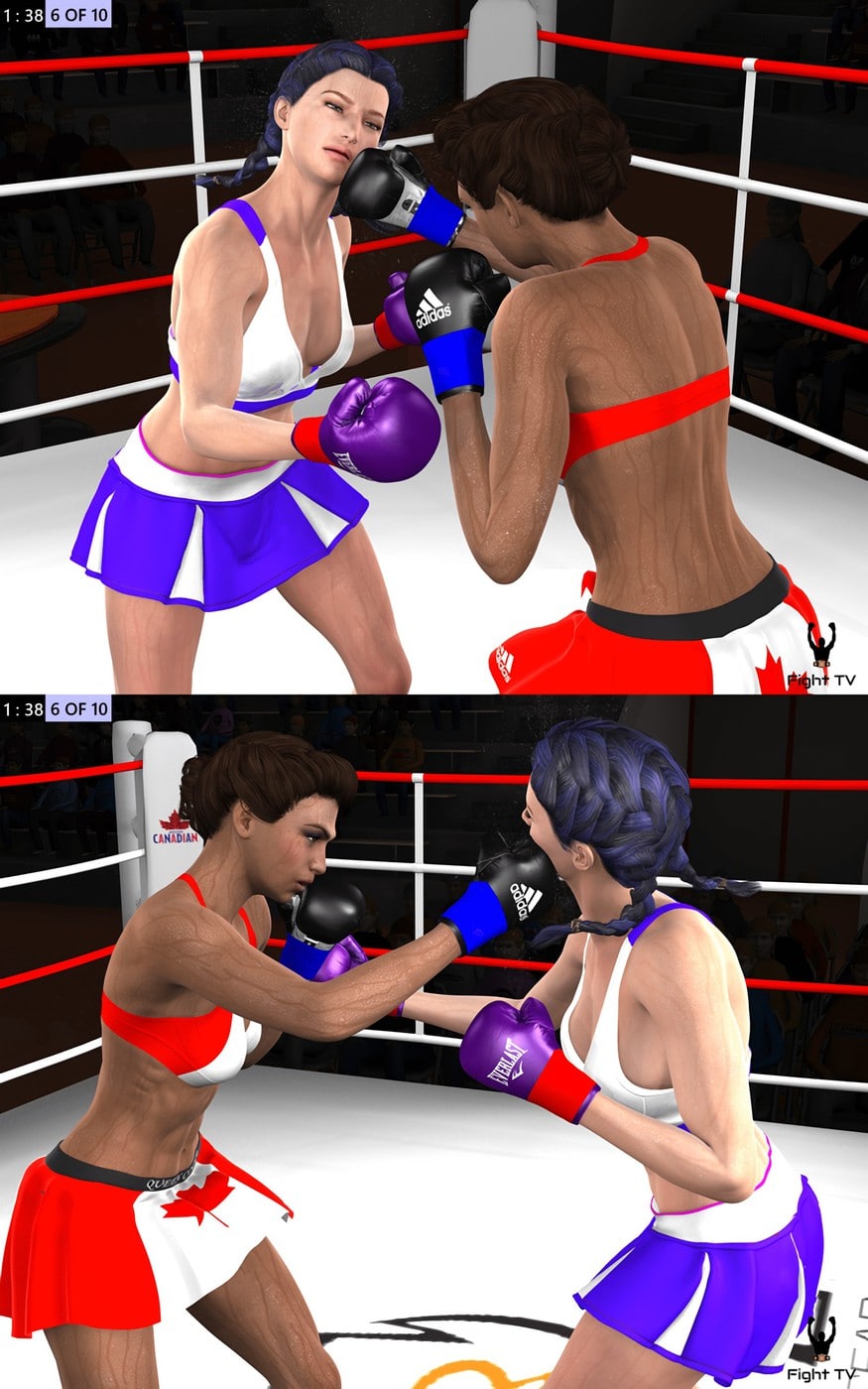 Commentator: “The two fighters are going at it here in the 6th and now Heather lands a good left hook right around Virani’s beltline…that one appears to have hurt Virani!”

Virani: Heather isn’t going to go away. She’s aggressive still. She then fakes and lands another wicked punch to the body that makes my body react…my mouthpiece slips from my mouth…I’m hurt.

Heather: Hell yes, I got her good. I can finish her off!

Jennifer: That one looked low again. I’m going to intervene. 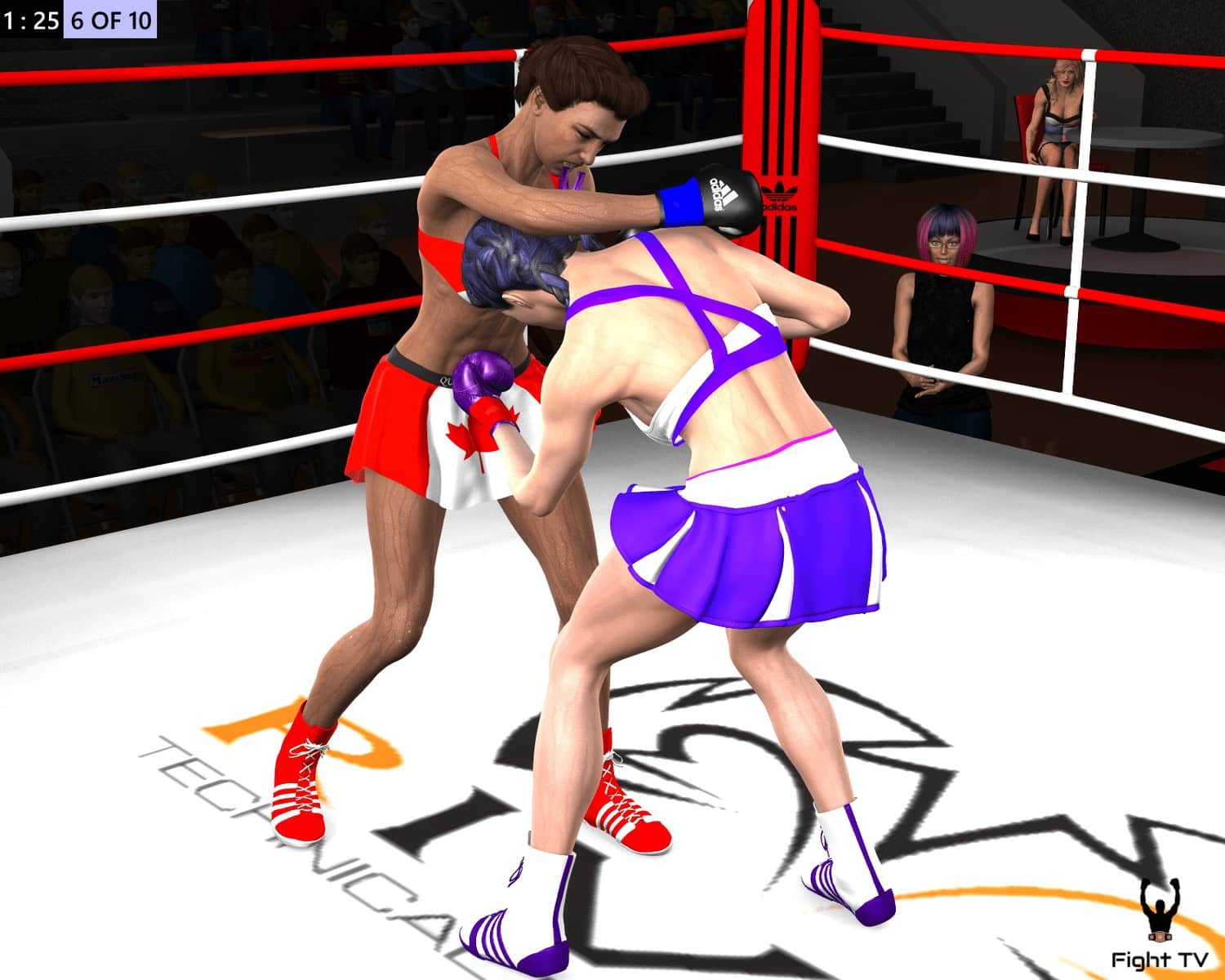 Commentator: “The referee has stepped in to stop the action momentarily…looks like she thinks that last punch from Heather was low…certainly it looks like Virani felt that one.”

Jennifer: “STOP!” I move to put myself in between the two fighters. “Time!”

Heather: What the hell…I had Virani hurt!

Jennifer: “Take your time to recover, Virani. Heather I warned you about hitting low!” 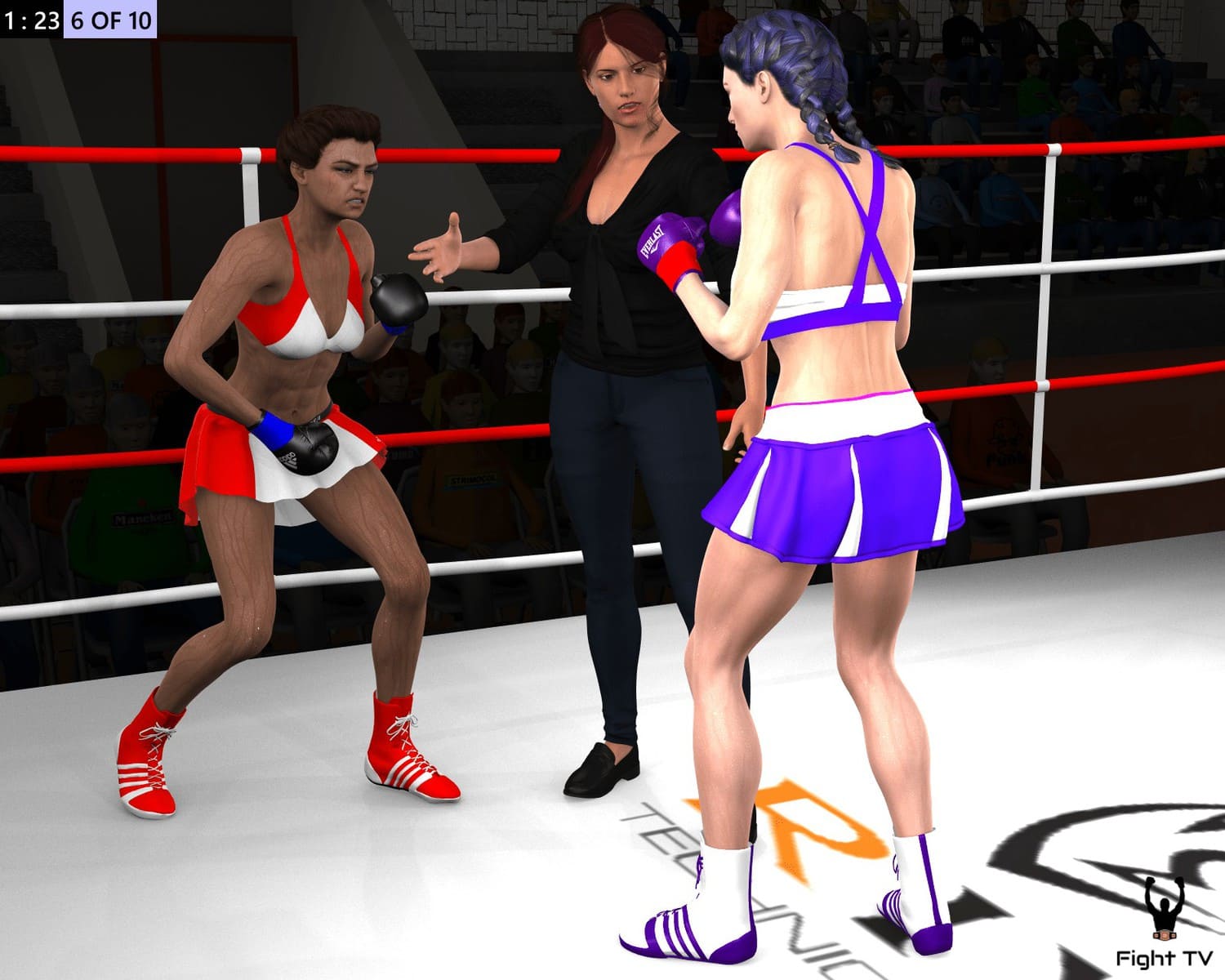 Commentator: “MacVicar has recovered fairly well from the earlier punishment, and Heather Barker seems hesitant to punch low after the warnings from the referee…and now Virani nicely dodges a jab from Heather…”

Virani: Heather’s jab is a bit tentative and I manage to read it and slip it. Maybe there’s a slight opening to throw a punch… 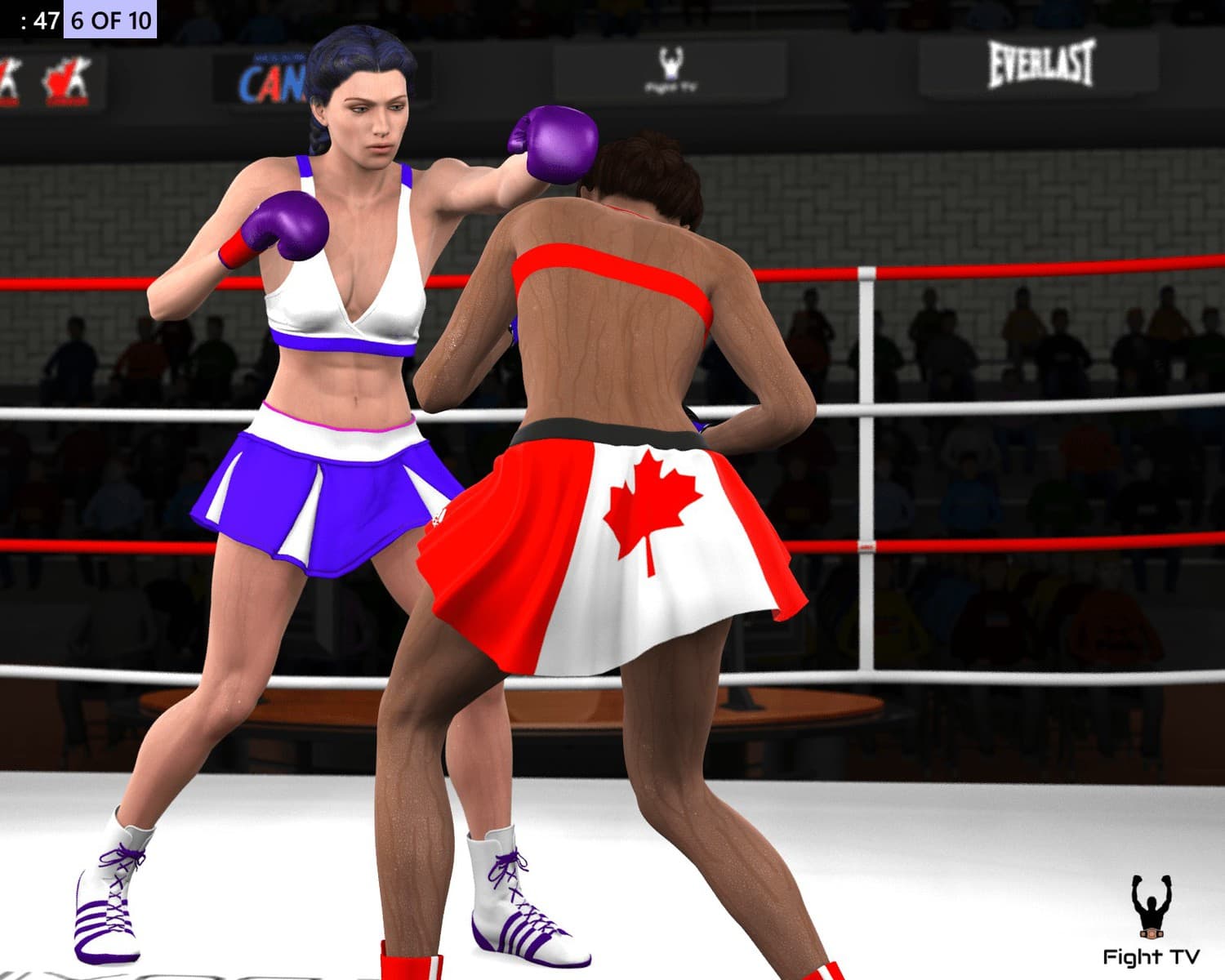 Commentator: “And after the miss, Virani connect with a solid uppercut to Heather Barker’s chin. The Canadian champion gets a bit of her own medicine! Virani’s not known for having a vicious uppercut, but that one certainly stung.”

Heather: Oof. Damn. That one snapped my head back for a moment.

Virani: A solid connection. Damn, that feels good. I gotta keep going. I need this round, I need the momentum. 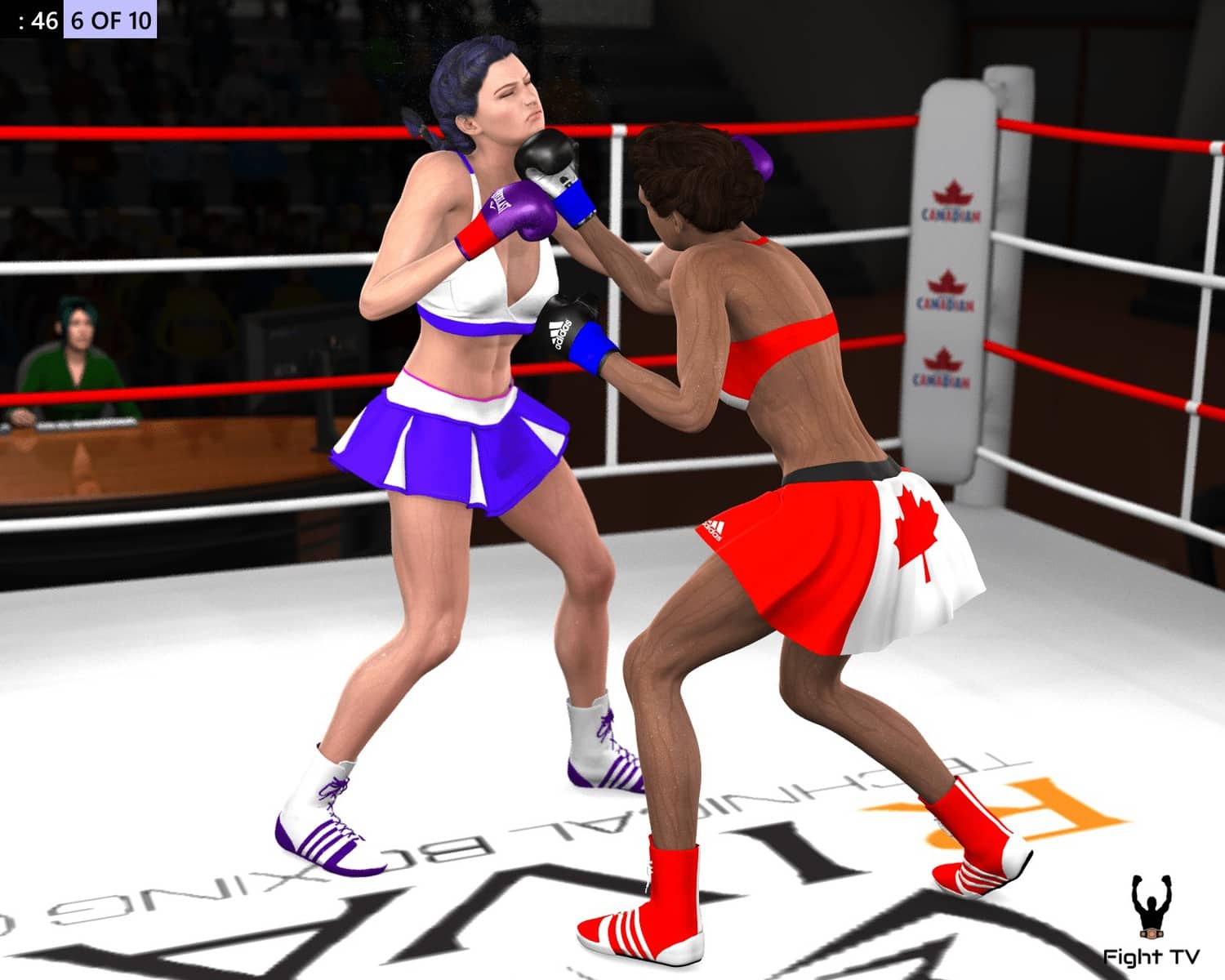 Commentator: Virani is back on the attack as Heather seems to have gotten slightly rattled by that last uppercut. The Canadian Cobra tries for a left hook, but Heather reads it and slips it! Heather doesn’t fire back, but manages to escape without taking harm!

Virani: Damn, Heather has my left hook read well. I have to be way more tricky when I throw it.

Heather: I’ve tasted Virani’s left hook and I don’t want to do it again, so I make sure to get myself well out of the way when I see her throwing it. I still want this round. I need to get the momentum back. 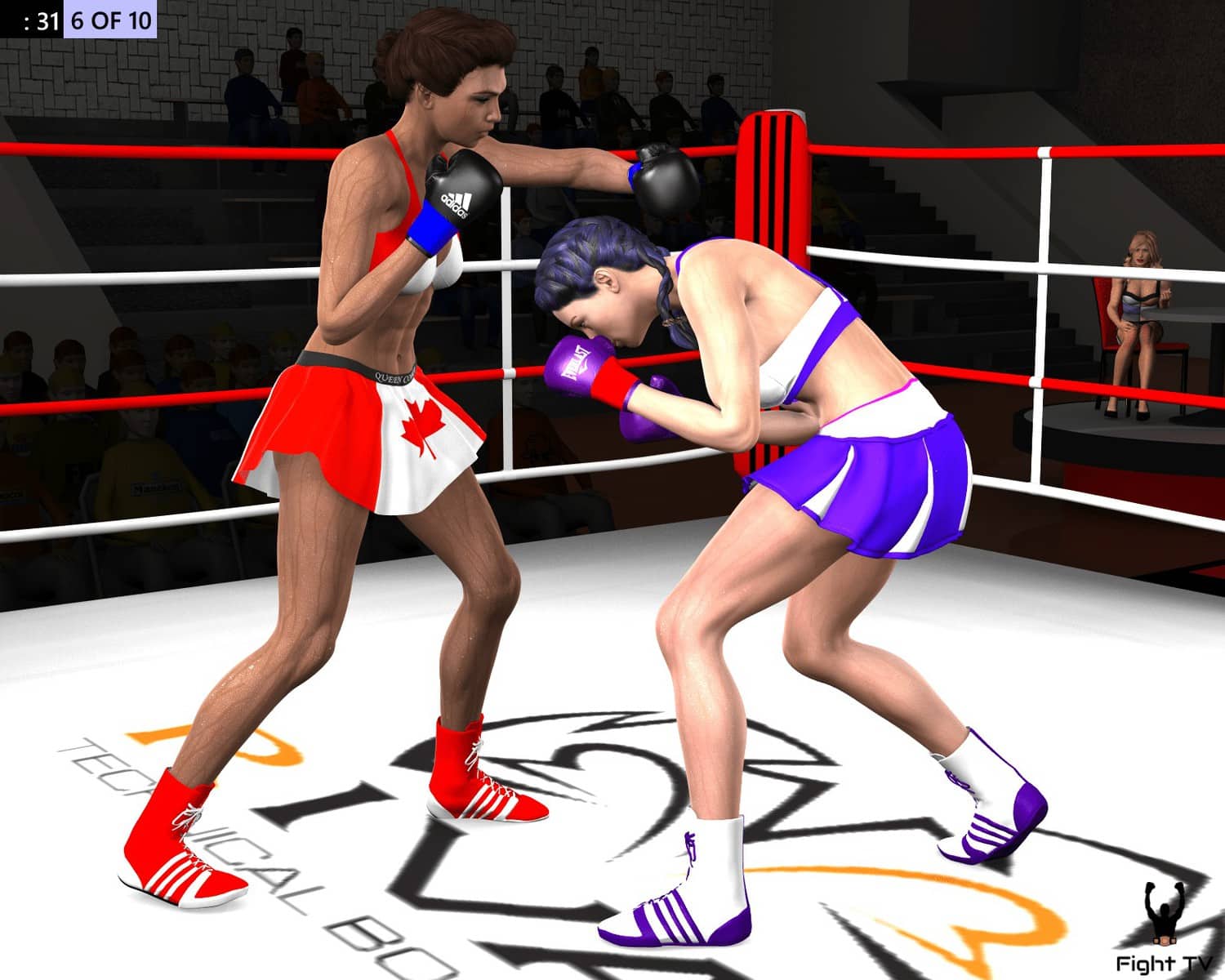 Commentator: “MacVicar seems to be coming on here in this round…and now she lands a solid left hand. That one made a nice sound as it reverberated around the arena.”

Virani: Heather’s giving me too much respect for my left hand, and its giving me openings for my right.

Heather: Grrr. This damn girl will not go away! 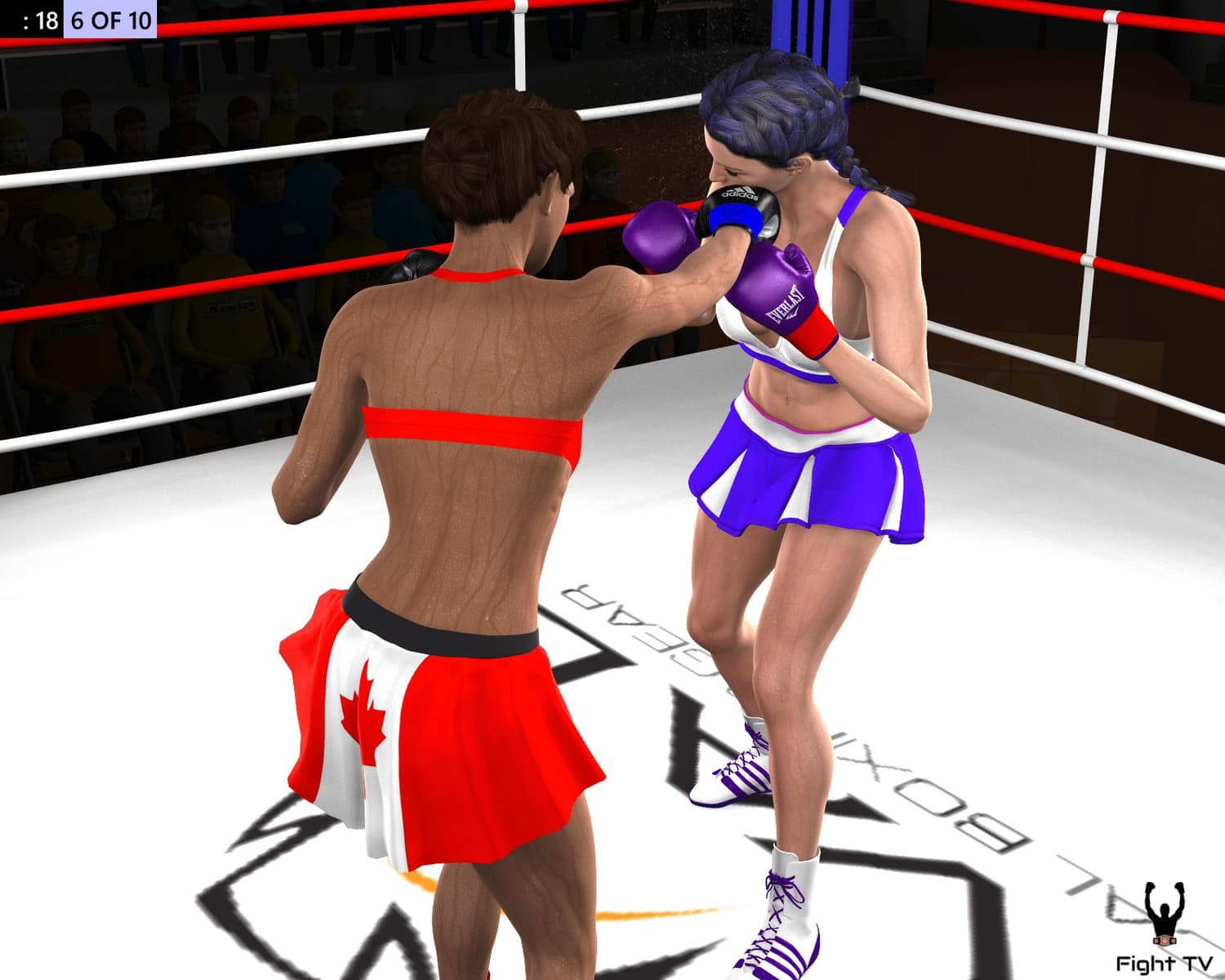 Commentator: “This round is heading towards the end…but Heather catches Virani with a nice left hook before the bell can go. Not the most impactful punch in the world, but it certainly scored points!”

Virani: Damn, thought I could avoid that one. Tricky.

Heather: Hah! Finally got you again. Not my best punch, but it’s nice to get my leather on Virani again.

Thomas: Damn. Well, it was a good round for Virani at least. 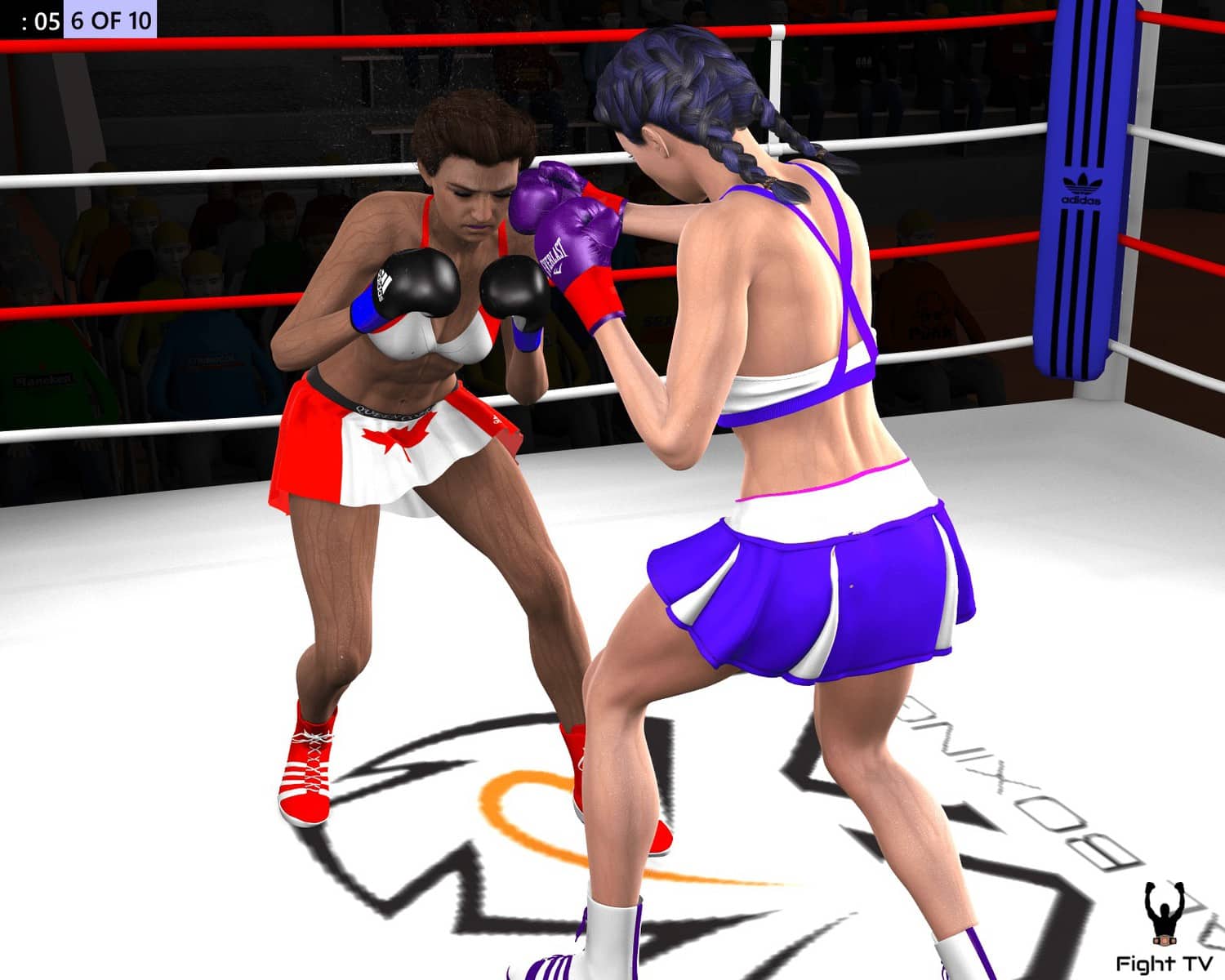 Commentator: “Looks like fighter and coach are happy with that last round.”

Thomas: “Nice work V. Let’s get you seated. How are you feeling?”

Thomas: “That last round was really solid. I want you to step it up in this round though. I’ll need you to keep pressuring her, use your movement and put some punches together – she’s keying on the left hook, so don’t lead with it, okay?”

Virani: “What do you think the scorecards say?” 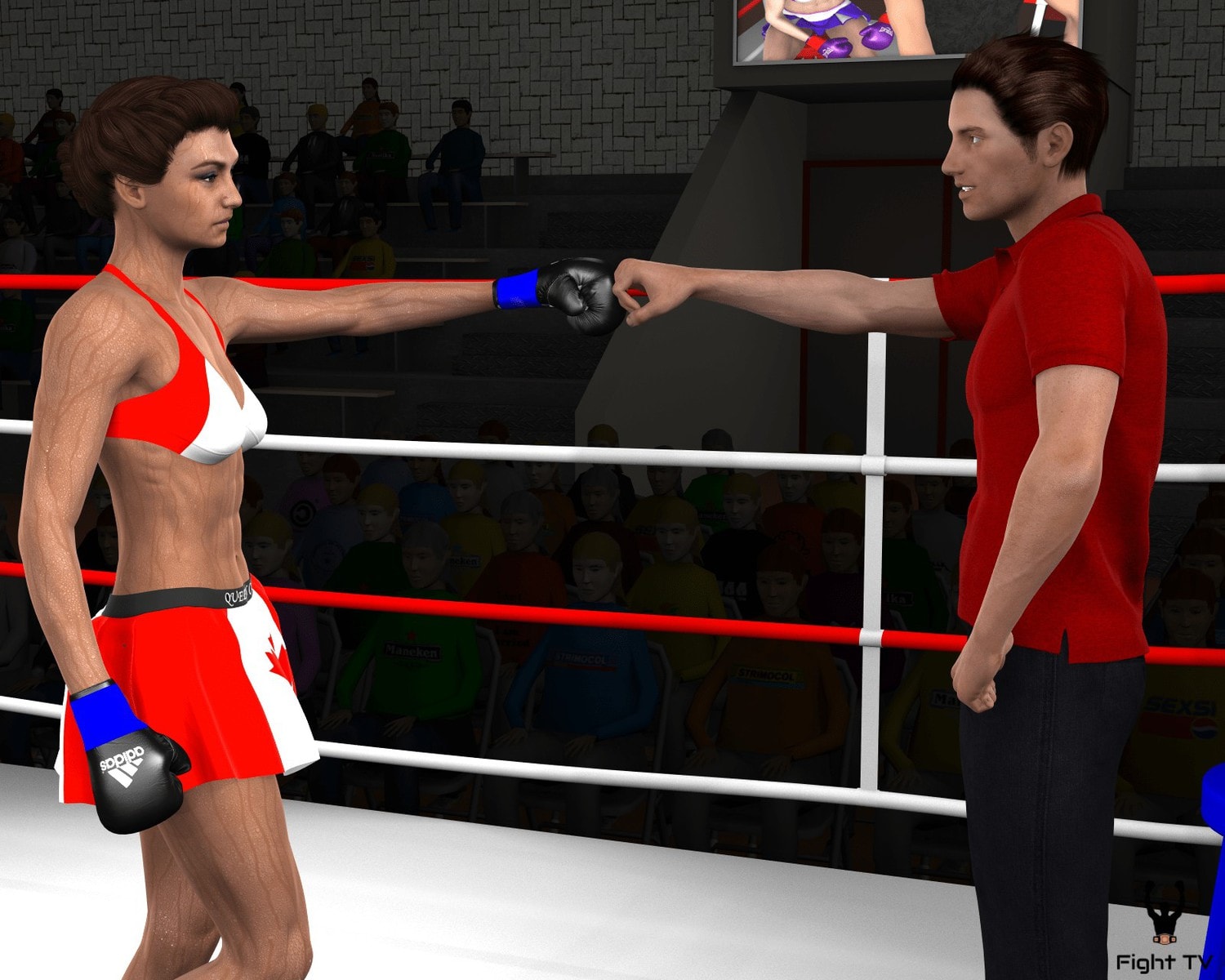 Commentator: “And now let’s go to the Champion’s corner.”

Heather: “She beat me that round.”

Sylvie: “Don’t focus on the past, my dear, there’s still rounds left in this one. We are still in the driver’s seat.”

Sylvie: “Okay, I need you to go back to the body this round…”

Sylvie: “Don’t worry about the ref. Keep your punches up but go to the midsection, okay?”

Sylvie: “Just a few more rounds, champ, and you’ll be out of here and into the top 10 of the rankings, okay?” 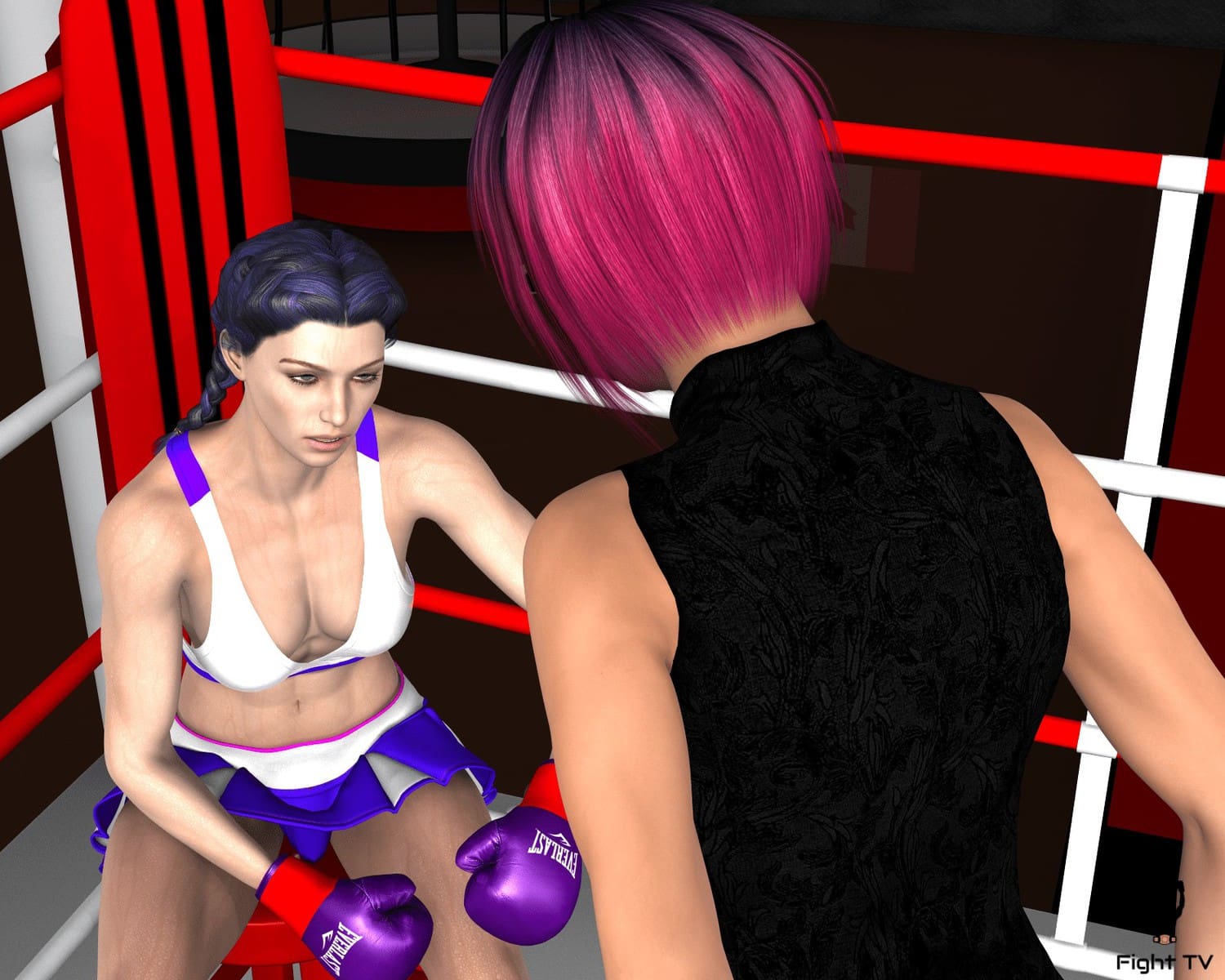 Commentator: “We have some other professional boxers in the arena and one of them is with me right now, Emma McGale, one of Virani’s sparring partners. How are you enjoying the fight so far? That is quite a dress, I may add.”

Emma: “Thanks! I’m wearing it in support of Virani.”

Commentator: “Well you pull it off nicely. Back to the fight, how do you have the fight scored so far?”

Emma: “After the last round, I have Virani down one point, thanks to the knockdown. But I think Virani is coming on in the fight – she’s recovered well from the knockdown. One thing I know about Virani, is that she has excellent endurance – she’s a great athlete.”

Commentator: “Has the fight lived up to your expectations?”

Emma: “I honestly didn’t know what to expect…we knew that Heather was good, but she’s fighting very well today. Both of these girls can still win this fight, which is what you want in a title bout.”

Commentator: “Well I’ll let you get back to your seat, as the 7th round is about to begin.” 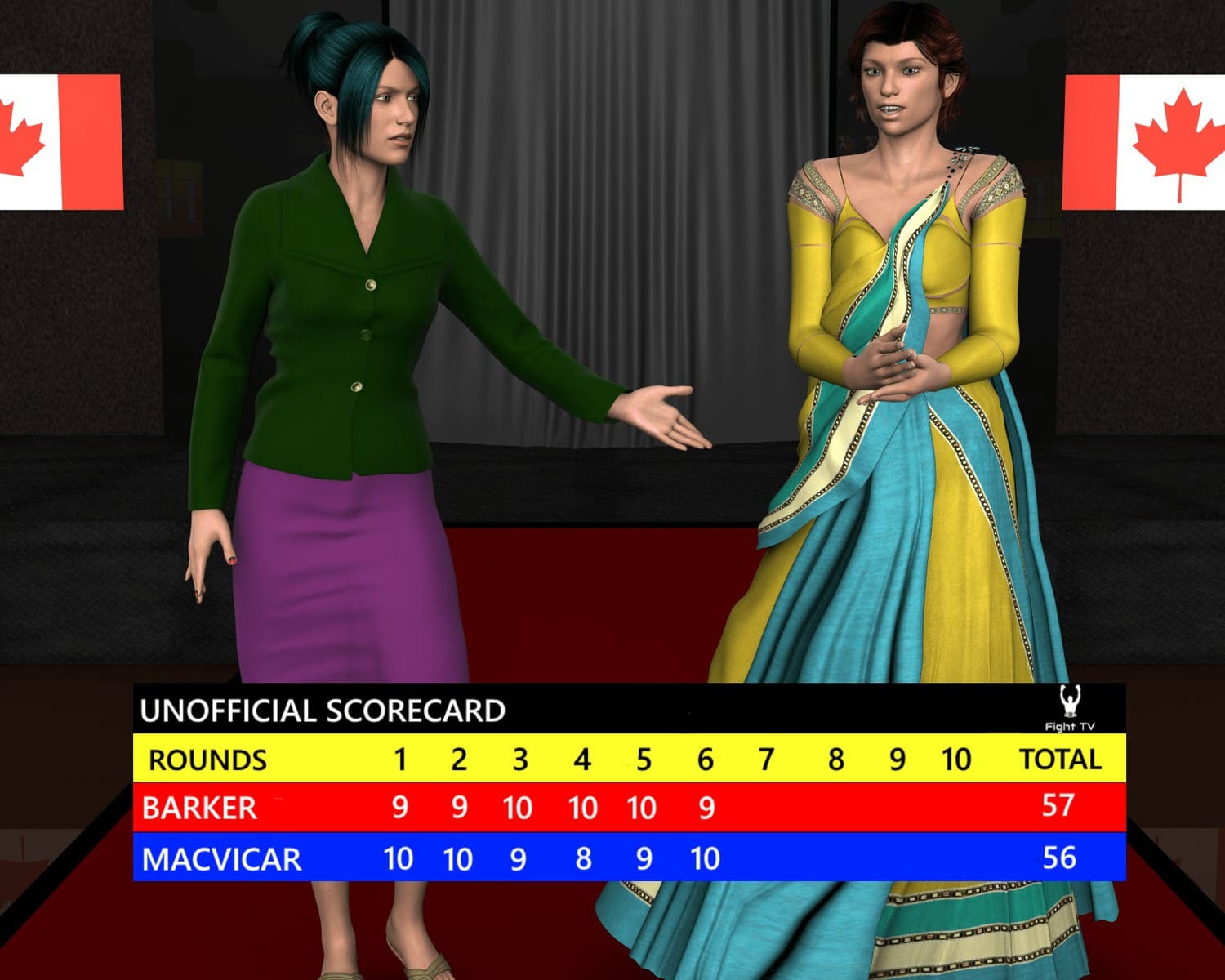 Heather Barker vs. Virani MacVicar – Round 5 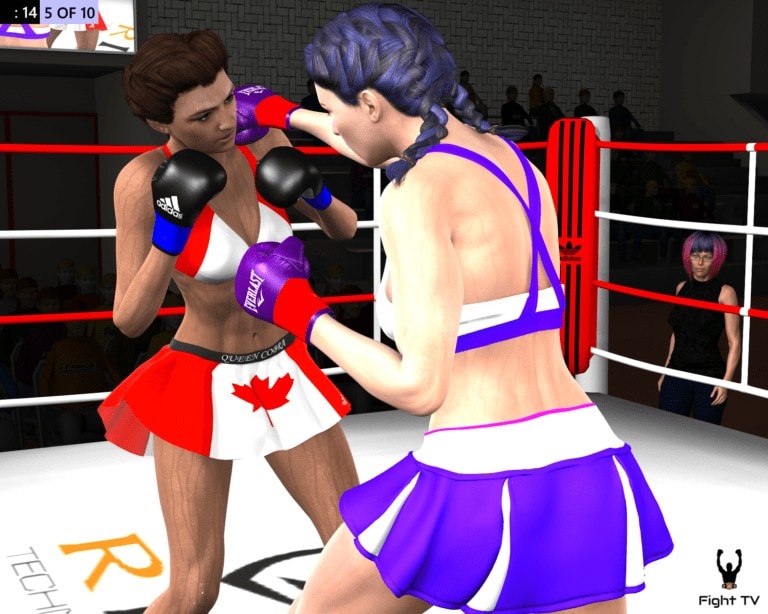 Heather Barker vs. Virani MacVicar – Round 7 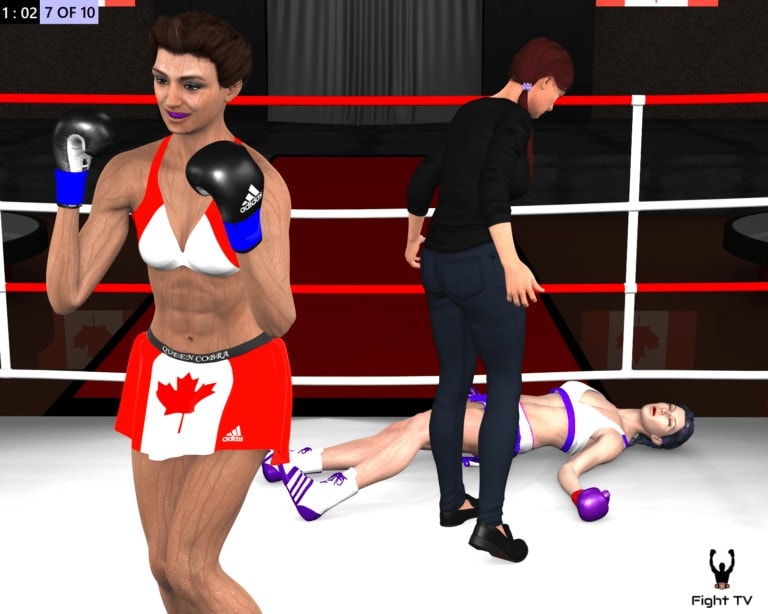