At Halmich gym, the coach has excellent news for Akane Watanabe. A big match is coming.

Regina: “We’ve booked you a fight with the number one Lightweight in Germany, Erica Kühn. I’m surprised that she took it, but she did. And she’s totally beatable for you.”

Regina: “I expect you to train like a devil and win this fight.”

The coach puts her fighter through gruelling sessions in the gym. Warmups, jump rope, speed bag. Crunches. Sprints. Heavy bag. Loud music to give the fighter extra motivation. Nothing is forgotten.

Instead of letting Akane work on her own on the bag, Regina insists on being close and egging her on. She shows dissatisfaction all the time.

Regina: “You need to throw the jab better. Put torque into it and twist your knuckles. This adds force to the punch!”

Akane repeats the move and grunts, but she twists her wrist to put additional strength behind the shot.

The long, intense sessions make Akane tired but her coach is happy.

Regina: “Great. I love your dedication.”

Regina: “You are currently number two at Lightweight in Germany. I reckon that if you beat the number one convincingly, you’ll be made number one and mandatory challenger at the same time. When we have that, the champ can’t duck you anymore.”

Akane: “I appreciate what you are doing for me, Regina.”

The fighter comes closer to get a hug.

Regina: “I’ll make you a champion. You’ll be as successful as Alesia in your weight class.”

Next in training for Akane is working with Regina in the ring, with the handpads.

Regina: “Your defense needs work. Vera Stone knocked you down and we want to resist better against power players.”

Akane: “I was worried about that.”

Regina: “I don’t want you to adopt the philly shell like Alesia. Your number one asset is pure speed and we can use it for better defending. Anticipation, footwork and upper body movement will do the trick.”

They get in the ring. Regina makes offensive moves and expects Akane to get in the right position to avoid getting hit. Then, she can either fake a move to the head or hit the pads hard.

Regina: “When you get close to a corner, it’s important to avoid getting trapped. Use footwork to move sideways and move either inside or outside the punch. You’ll find an angle to counter.”

The coach throws a right hand and Akane steps to the left while leaning with her upper body. Then, she fakes a left hook to the head. 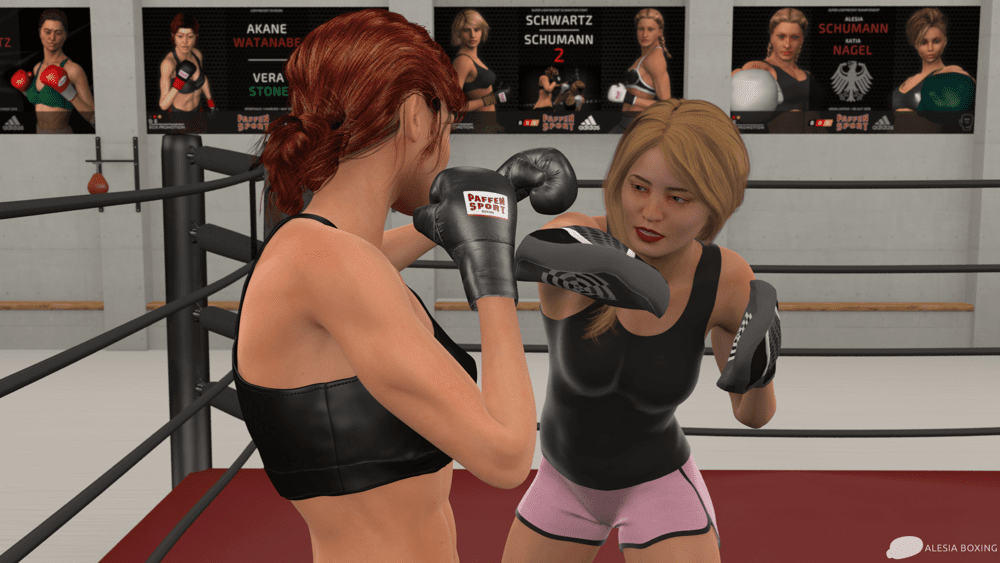 Regina: “Exactly! You could have hit me with your left hook, and have followed it up with a right cross as I would pulled my right hand back.”

Akane: “Right. That sounds so easy.”

Regina: “It’s hard to do in the middle of the action, but with more practice, it will become natural. Most people say that a boxer has to ‘stick and move’, but you can reverse the pattern. Move, find an angle and strike.”

At the end of another training session, Regina has a bit of suffering in store for Akane.

Regina: “Moving to defend is nice, but you know you can’t always avoid getting hit. We can’t train the chin for that, but we can train the abs.”

Sophie Schumann, who was warming up, gets the call.

Akane thinks: “Oh dear. I like Sophie, but the thought of getting hit by her is… gruesome.”

Regina: “Sophie will drill you.”

Akane thinks: “Into the ground, yeah.”

Regina: “Tighten the abs and breathe out when a punch comes in. Here’s your mouthpiece because… we never know.”

Sophie gets to work. She pounds Akane’s body with powerful shots. The poor target grunts every time she takes a shot, despite her best efforts to withstand the punishment. She holds the ropes and hopes she won’t double up.

Akane thinks: “Between that and receiving a brick… I’d take the damn brick.”

Regina looks at her timer and thinks: “She has to take it for two minutes.” 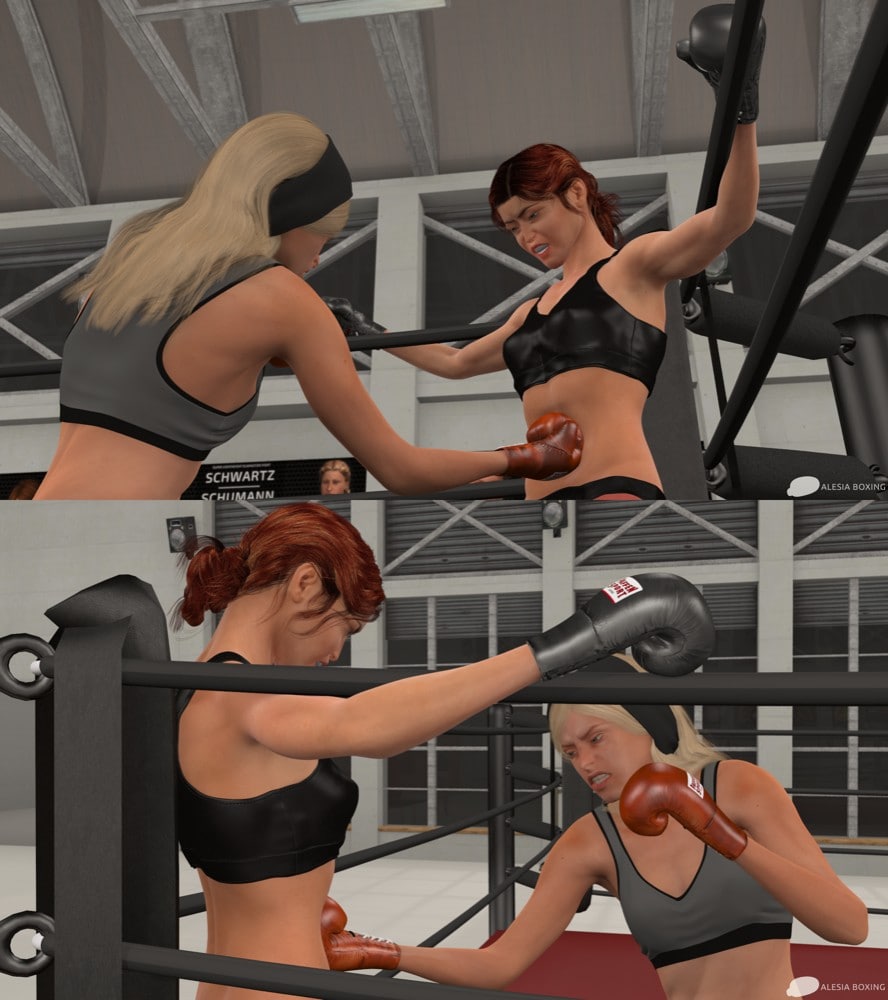 A punch too far

The coach looks at her timer as Sophie pounds Akane’s body. Time is almost up.

Sophie, who always enjoys dishing out punishment, gets carried away at the “bell”. She lets a left hook fly upstairs. It smacks Akane in the jaw. Akane grunts harder.

Regina thinks: “Did she really have to do that? Of course not!” 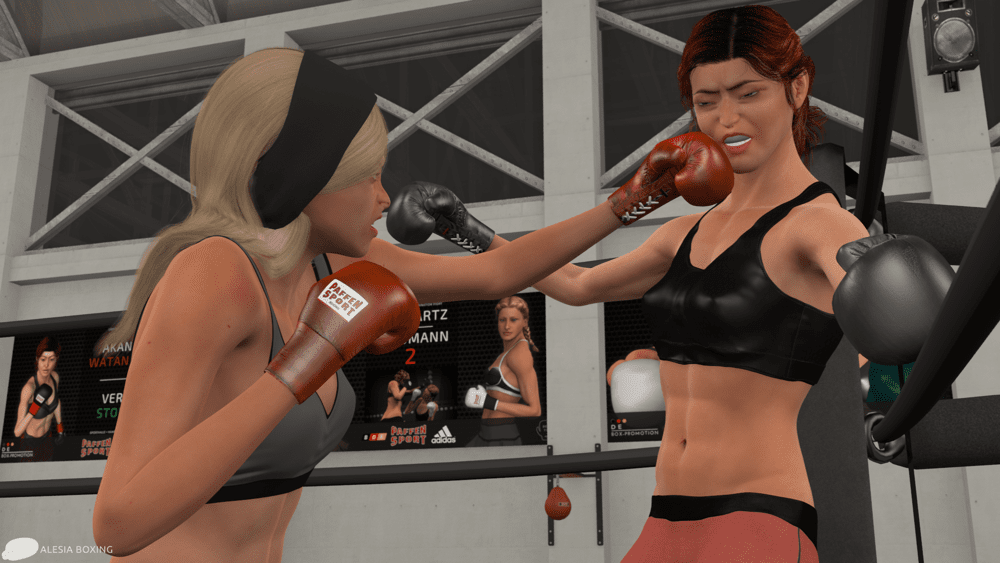 Akane squats to recuperate from the punishment she just took from Sophie. The head shot hurt, but the body pain is what keeps her down.

Coach Regina is pissed off because Sophie gave her training partner a punch in the head when she was only supposed to work the abs.

Regina: “Goddammit! That’s a shitty thing to do! Was she defending herself? No! Why the hell did you do this?”

The 19-year-old knows she messed up. Her eyes zero in on the accusatory finger pointed by her coach.

Regina: “You owe her an apology! Now!” 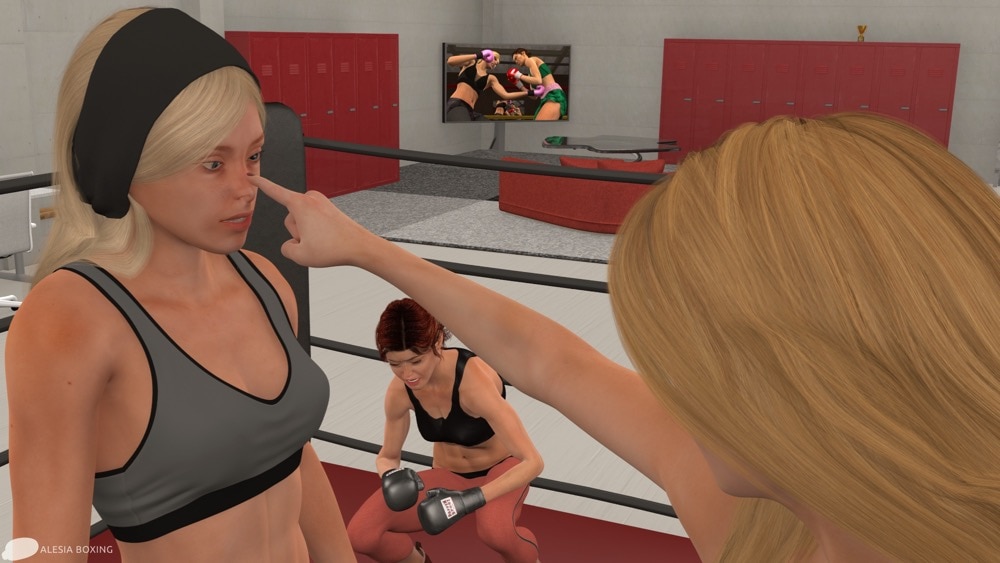 Told by her coach that she has to apologise after taking a free shot at Akane, Sophie feels sorry.

Sophie frowns sadly, realising that her behaviour was insulting to a friend that she likes very much. Once Akane is back on her feet, she turns to her.

Sophie: “I’m so sorry. I should never have done that.”

She looks her in the eye and then bows. She keeps her head down and thinks: “Damn. She won’t uppercut me into next week, will she? Well, I might have deserved it.”

A startled Japanese looks down. She can’t believe her eyes.

Akane: “Apology accepted. But Regina… was that necessary?”

Regina: “She has to learn to respect other people, especially those who are older than her.”

Akane: “Then, she should bow to you. Aren’t you ancient?”

The coach is stunned by the unexpected wisecrack. Akane turned a moment of contrition into comedy… at her expense.

Regina turns to Sophie, who goes back to bowing at Akane. 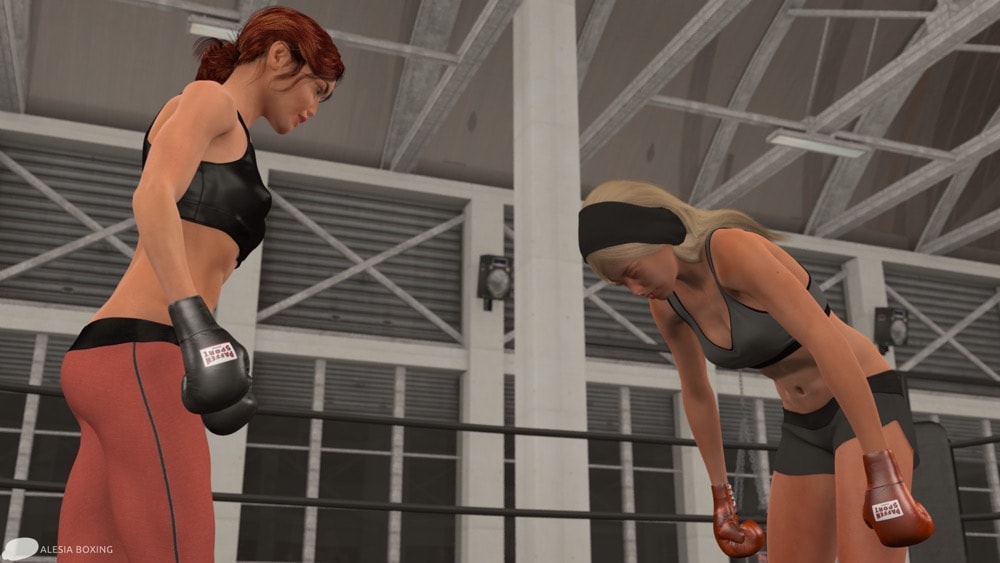 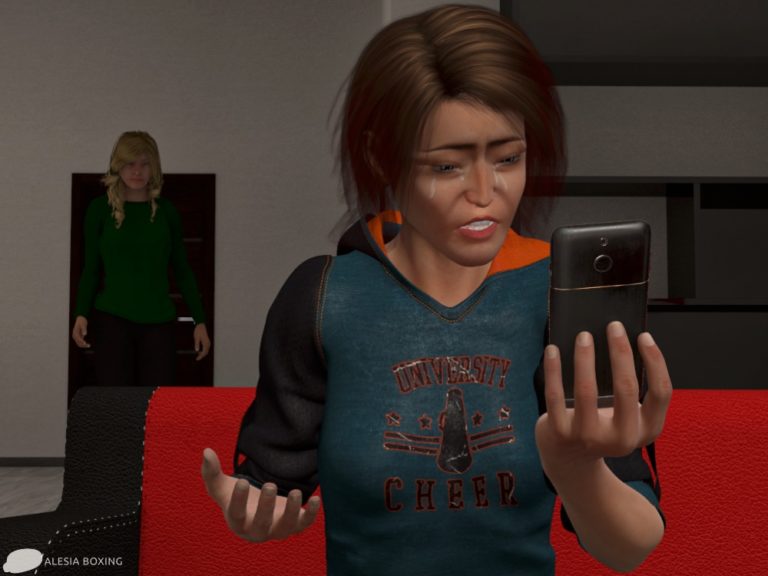 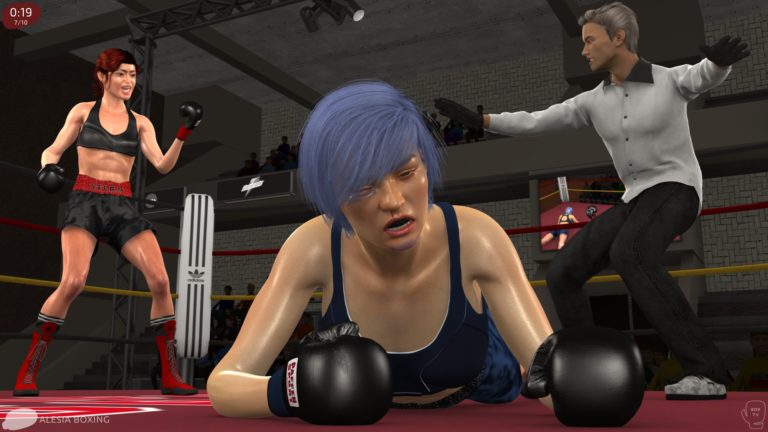