Denver, December 2018 – Mercedes Carter and her coach/adoptive dad Carl Williams are in the dressing room. A fight just ended in the arena. A few more to go before Mercedes fights in USA Boxing Golden Gloves final, Welterweight division.

It’s time to warm up. Mercedes starts with stretching, followed by shadow boxing. Then, light work on the pads to be truly warm ahead of the fight. Once her body feels ready, she goes back to the floor to loosen up a slightly stiff left calf.

The coach uses the occasion to give her a motivational speech, something he never has done before. Mercedes has always been primed for action, but he wants to add an extra layer today.

Carl: “When I came to ya in the gym dat first time, ya were wide eyed but ya had no direction. Look where ya are today. Ya found a purpose. Ya found a family. Ya found a passion in sport. Yer one fight away from bein’ American champion.”

Mercedes doesn’t look at him, but she’s listening. Mental pictures appear as she hears his words.

Carl: “When ya get in that ring, remember what it took to earn it. Remember da shit moments. Da grunts, the sweat, da blood yer first tough sparrin’ partners drew. Remember da cold winter nights when ya put in da work to become a strong, successful boxer. Yer friends thought ya were nuts, but they applauded and chanted yer name at da fights.”

Carl: “Remember all those times when we drove to other states to fight and build ya up. When ya did dat, other kids yer age were drinkin’ beer, eatin’ burgers and havin’ all kindsa other stuff I forbid ya to touch.”

The young pugilist nods. She gets up and looks at her coach while he ties and secures her gloves.

Carl: “Why did ya do it all? To come here, kid. To win it all. Tonight’s our night. Nah. Tonight’s yournight, kid. Yer not fuckin’ around in dat ring. I don’t care if it’s on points or if ya put da other girl on a stretcher. Yer gonna win and be da American champ. There ain’t nobody to stop ya, kid.” 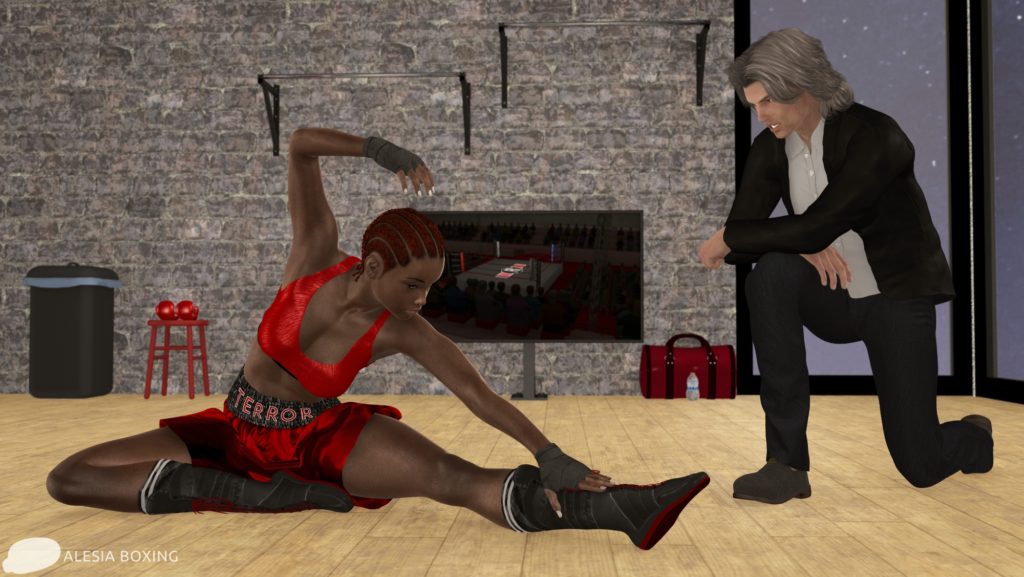 The USA Golden Gloves finals are underway in Denver. It’s time for the introductions in the Welterweight division.

Announcer: “Ladies and gentlemen, welcome back for the Welterweight final. Introducing to you first, she is fighting out of the blue corner. She has 34 wins, 16 of them by stoppage and only 4 defeats. She hails from San Diego. The current California State Golden Gloves champion… Caitlin “The Witch” Brown!”

Tanned with a solid build, Caitlin comes out of the corner to salute the crowd. The attendance responds with spontaneous applause. Her coach Nathan Jones… seems to have some attitude.
Mercedes thinks: “She won’t be so happy once I start punching her.”

The tournament finals are live on Star Sports 2, a mainstream sports network in the US. Jim is doing play-by-play while Warren is the colour commentator.

Jim: “Brown is the sunny-side up kinda of girl, typical from San Diego. There must be something in the water over there. I wish more people were like that.”

Warren: “They also say there’s something in your water, Jim, but it’s not a compliment.” 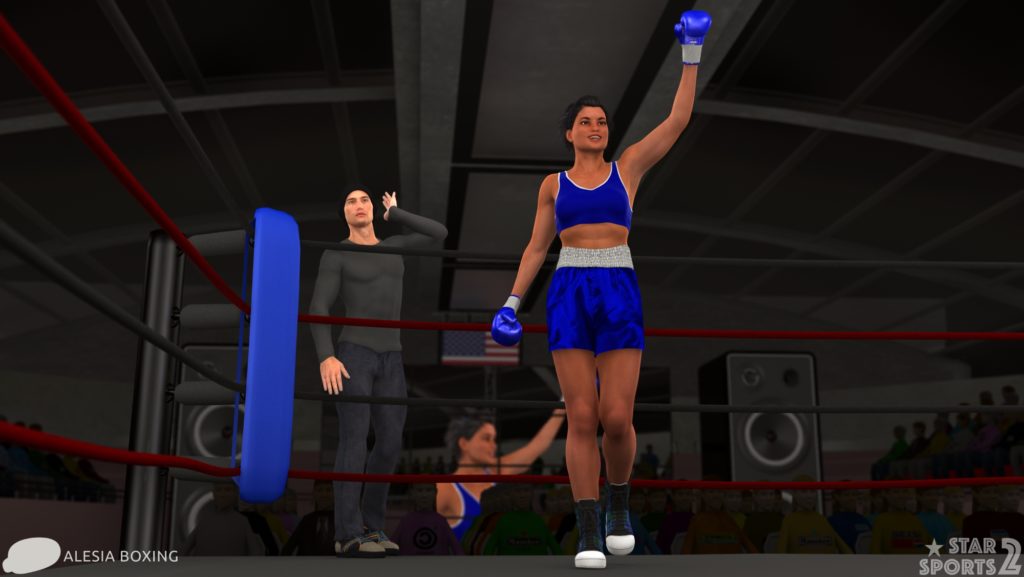 Ring announcer: “Her opponent across the ring fights out of the red corner, and she comes from Detroit. Her record stands at an impressive 55 wins, 32 of them by stoppage, and only 4 losses. Twice the Detroit Golden Gloves champion in the Welterweight division, here is Mercedes “Red Terror” Carter!”

Better known than Caitlin, Mercedes draws the loudest cheers. In fact, the loudest heard for a woman in the tournament because she is a celebrity in amateur circles. She doesn’t run around while saluting the crowd, opting to keep eye contact with her opponent.

At ringside, the organisers put sofas for special guests and Anne Carter cheers for her cousin. [Depth of field blurred her a lot more than expected.]

Jim: “Mercedes Carter wears her nickname well. Always friendly outside the ring, the icy look of death she gives her opponents is rather fearsome. The way she fights backs it up. She breezed through the first three fights, on her way to this final.”

Warren: “I bet you would run around like a chicken after getting that icy look, Jim.” 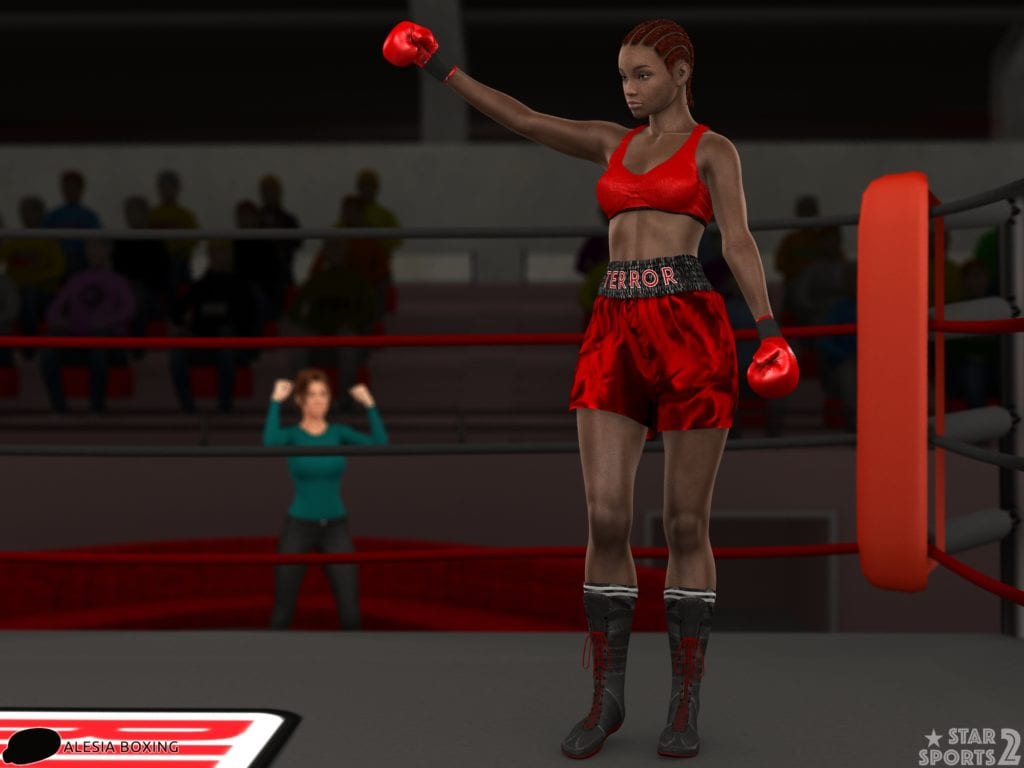 The referee calls Mercedes and Caitlin to the middle of the ring for the usual pre-fight formalities.

Referee: “The fight is scheduled for four two-minute rounds. In the case of a standing eight-count or knockdown, you have to go to a neutral corner. Protect yourself at all times. Obey my command at all times. Touch gloves and give us a good fight.”

The two boxers pause to look at each other for a few seconds, with a stark contrast in attitude.

The cheerful Caitlin smiles at her opponent and thinks: “This is gonna be a good fight. We’re the two best Welterweights.”

Mercedes adopts a cold, determined stare and thinks: “There’s only room for one champ. It ain’t gunna be you, sistah.”

Jim: “If body language means anything, Carter will deliver a violent performance tonight.”

Warren: “It’s boxing. Of course there will be violence.”

Jim: “You know what I mean, smarty pants.”

Warren: “Indeed. These two fighters are both very skilled but Carter’s pugnacity is notorious. She puts the mean in demeanor.” 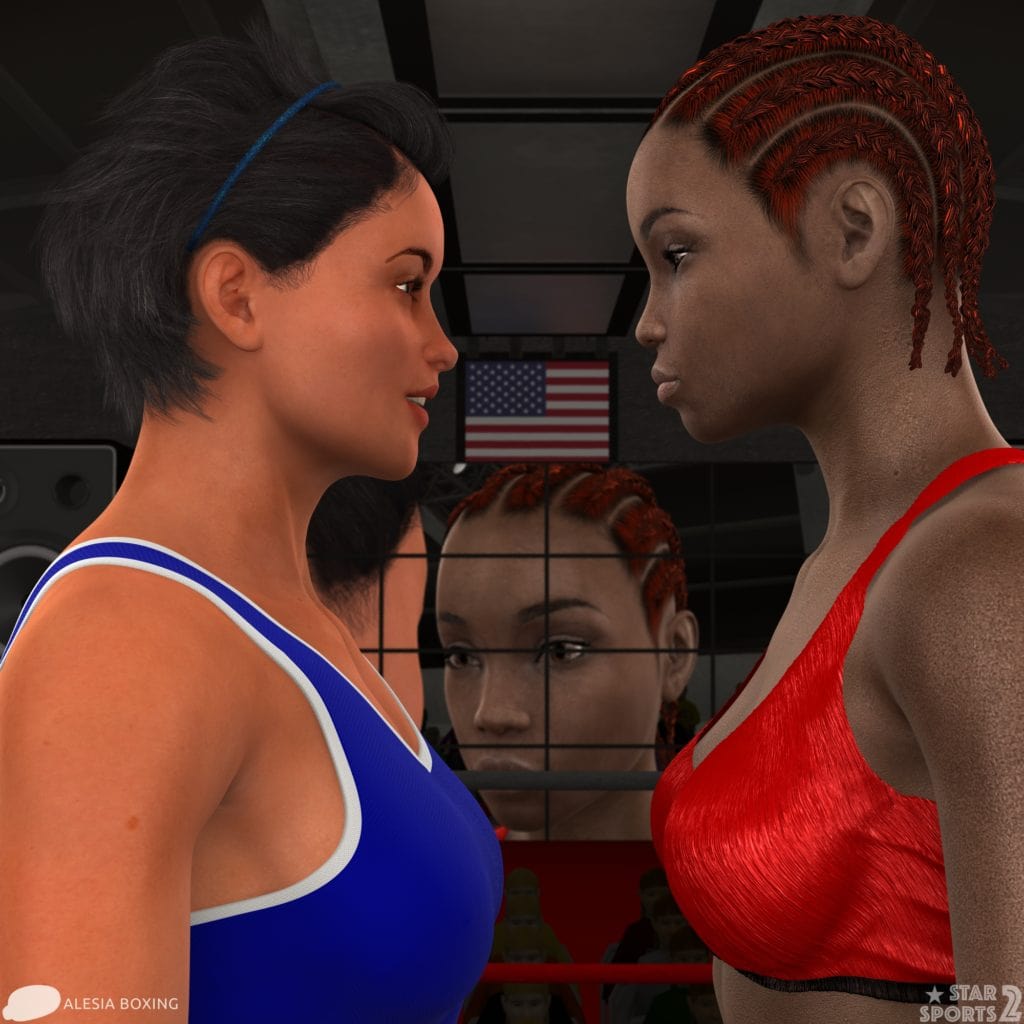 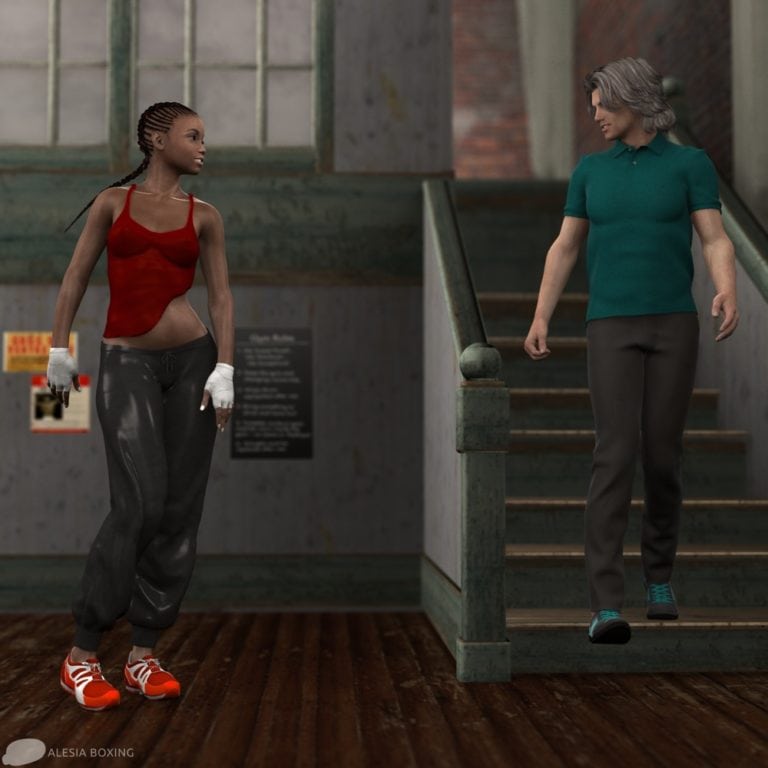 Strong start: Mercedes Carter at the Golden Gloves – Round 1 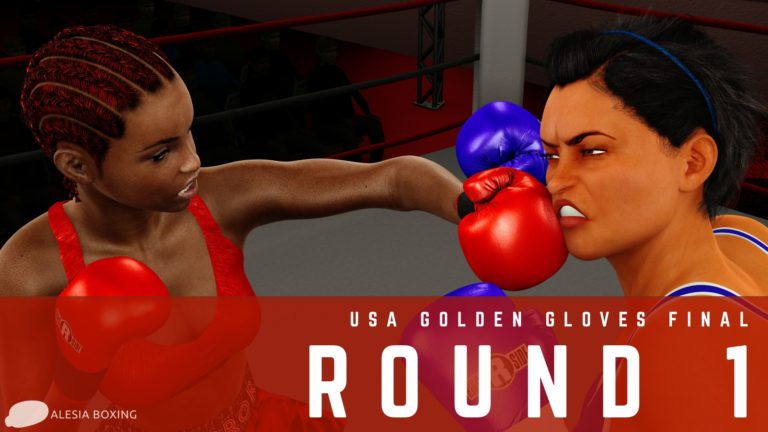