The boxers go back to their corners after touching gloves. They get their mouthpieces and last words from the coaches.

The ref looks around to be sure that everything is in order and waits for the sound that everybody is asking for. The bell rings.

The boxers quickly approach and tap gloves in the centre of the ring. They circle for a few seconds. The girl plays the waiting game, knowing that her athleticism is superior to that of most fighters. Caitlin starts with a pawing jab to feel things out. Easily blocked by the Red Terror.

Mercedes pivots as if she were to throw a jab to the body. Caitlin opens her stance to throw an overhand right cross, but her opponent goes back up, and in, with a left hook to catch her on the cheek.

Jim: “Carter begins with a power shot. A cheeky little feint to give the illusion of an opening, only to connect hard in the first 10 seconds.”

Warren: “This is the way she likes to box. No all-out attacking. Rather using her opponents’ movement and banking on physical prowess to get the job done.” 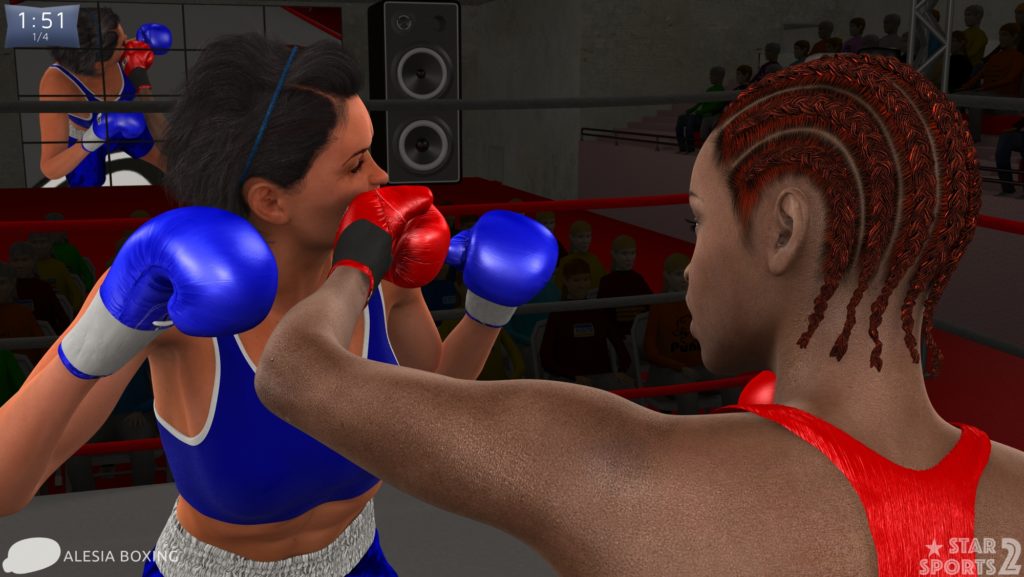 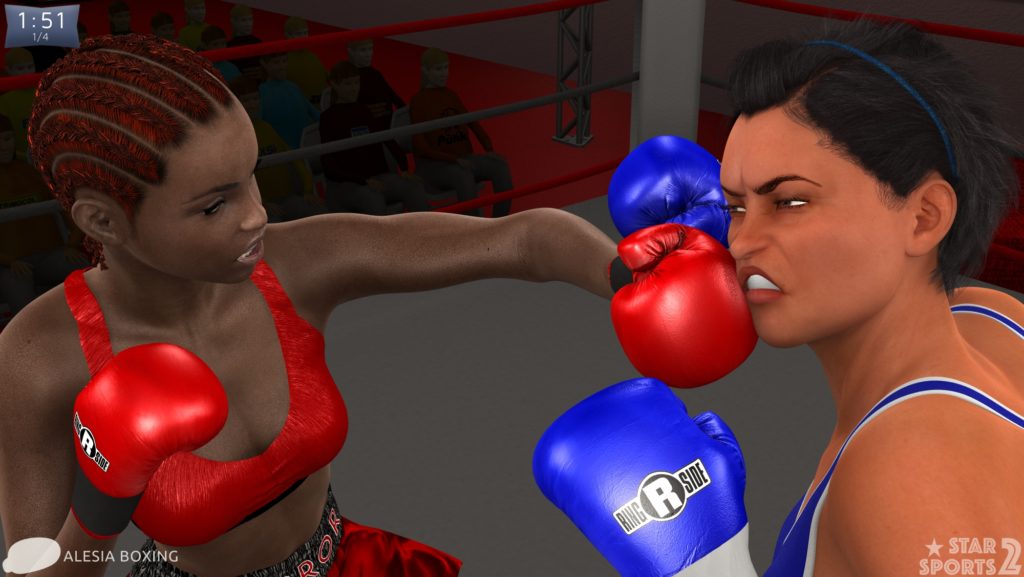 Mercedes starts well. She takes control of the ring with a boxing style that Caitlin finds hard to deal with.

Red Terror moves quickly, but she rarely takes the initiative. She prefers to stick with a proven “reaction” method that gave her… more than 50 wins.

In the middle of the ring, the two fighters trade shots, but nothing serious lands besides the odd jab. Then, Mercedes applies pressure to force Caitlin to step back to her right. The girl from Detroit bobs and weaves to make her opponent hesitate.

Mercedes then looks like she may throw a right cross to the head, which Caitlin looks to counter with a left hook. Mercedes takes a step back to the right and goes in with a straight right to the body.

Anne Carter thinks: “Wow. How can she do all of this so quickly?”

Jim: “Carter scores with an excellent right hand to the body. Warren, how do you explain her success? She’s got 55 wins, but she never seems to be the number one at any of the specifics.”

Warren: “That’s right, Jim. When you look around in women’s boxing, you always find someone who has more punching power, speed, agility, tactical genius and whatnot. Carter brings those individual qualities together, in one package, and uses them with instinct and understanding of movement. That’s why she stands out.” 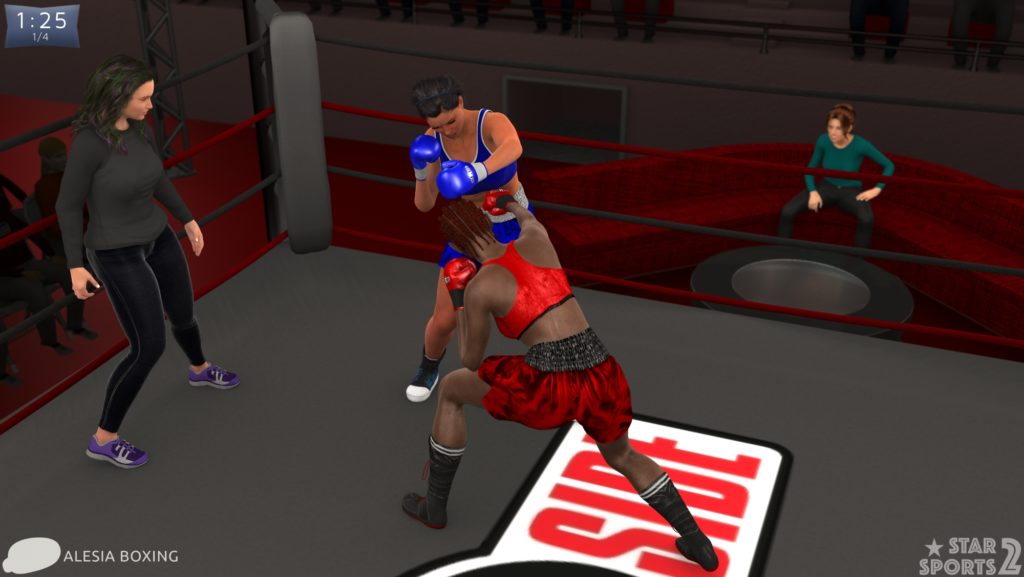 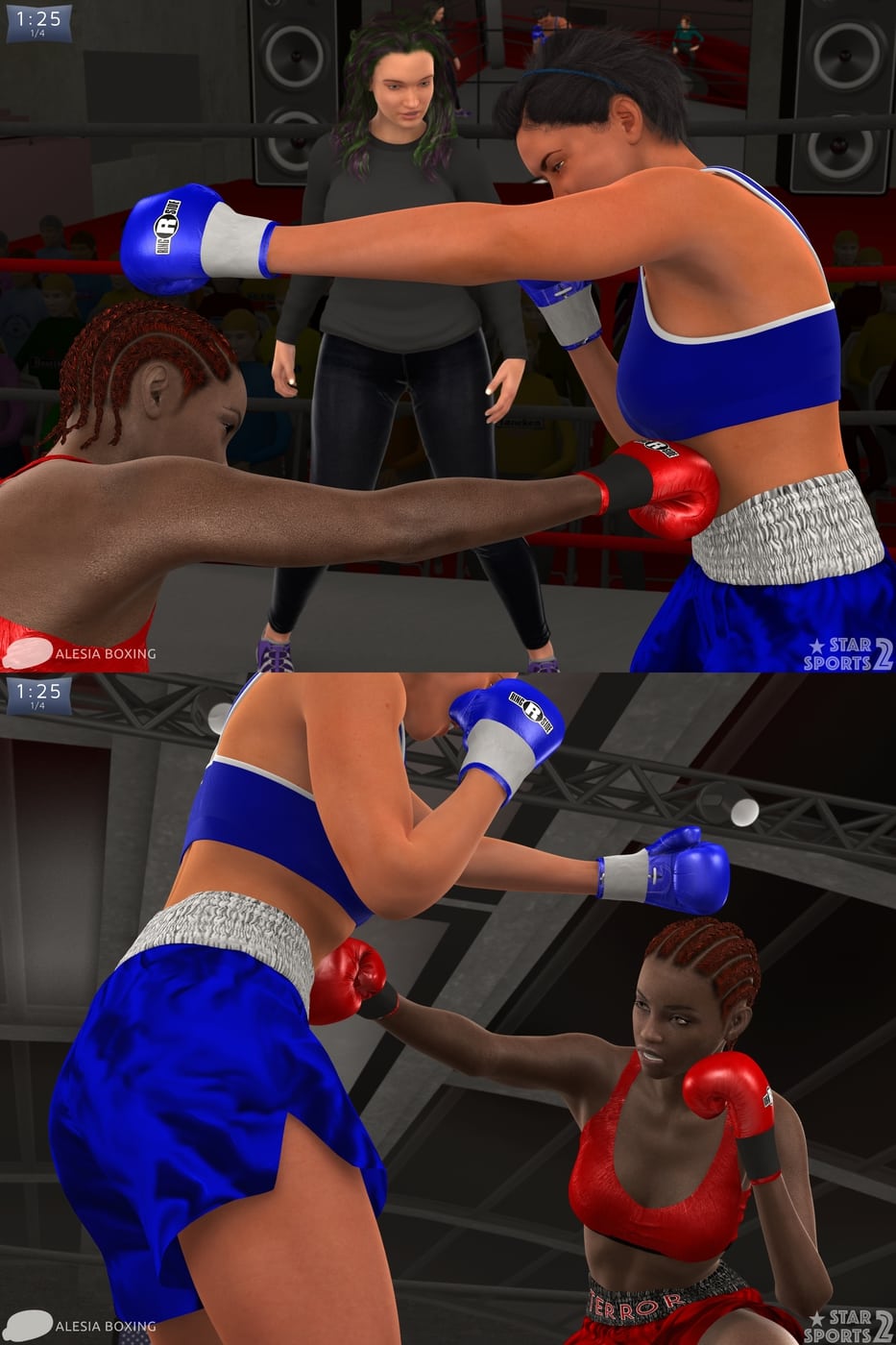 Jim: “Mercedes Carter has dominated the first minute of this fight with movement and instinct. She is true to her reputation as a steamroller.”

Warren: “Brown will have to react quickly. Otherwise, she will only be a piece of pavement left behind by Carter.”

In the blue corner, Caitlin’s coach is pissed.

Nathan: “WHAT THE HELL ARE YOU DOING? GIVE THIS CHICK A REAL FIGHT!”

Caitlin doesn’t come out of nowhere. She already feels the urgency to react. She charges forward and throws a heavy-duty one-two in Mercedes’ gloves. It takes her aback.

The Red Terror scrambles back near the blue corner to weather the storm and hopefully avoid getting smacked. The one they nickname The Witch follows her around quickly. Before Mercedes has time to sidestep to the right, she throws an unexpected, looping right hook. It lands on the side of the eye.

Jim: “It took more than a minute, but Brown found a way to land a clean punch. She was just a bit quicker than Carter.”

Warren: “Keep in mind, though, that she spent a lot energy in a few seconds to land this power shot. Few amateurs can bring this kind of intensity to the game for four full rounds. Can she bring the fight to Carter without exhausting herself?” 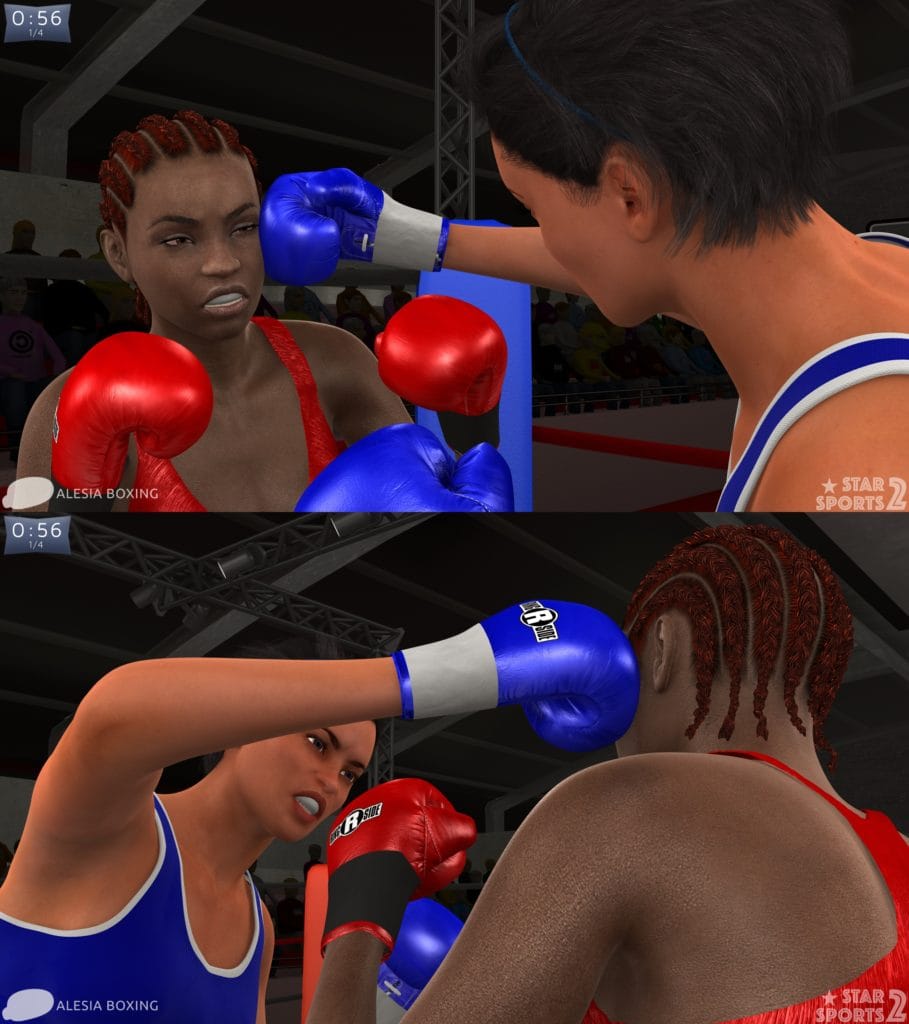 It’s a contested first round in the Welterweight final at the USA Boxing Gloves 2018. These two fighters aren’t giving an inch.

Moments ago, Caitlin landed a good right hook and she wants more. She attacks and looks for a chance to put Mercedes in trouble.

Red Terror’s awareness is not easily undone, though. She has no problem leaving the middle of the ring to her opponent and moving around to nullify her power. Works around the ropes and doesn’t mind dealing with pressure.

Near the ropes and close to the red corner, Mercedes loosens up. She drops her left hand. Caitlin thinks this is an opening to land a clean punch. She comes forward with a right cross. Mercedes rolls her shoulders to deny her. The blue glove only brushes her left shoulder.

Jim: “Brown threatens near the ropes. She looks dangerous. A big right hand comes out but Carter does the shoulder roll to avoid taking a big shot. Such nice work from the Detroit girl.”

Warren: “This is why I always tell people that you have to think backwards in boxing. Drop one hand to see the punch coming and gain the freedom to move your upper body. Gorgeous stuff from Carter.”

Anne thinks: “Damn, girl. How do you do these things? I’ve only seen that move on TV. Wait, we areon TV here. That explains everything!” 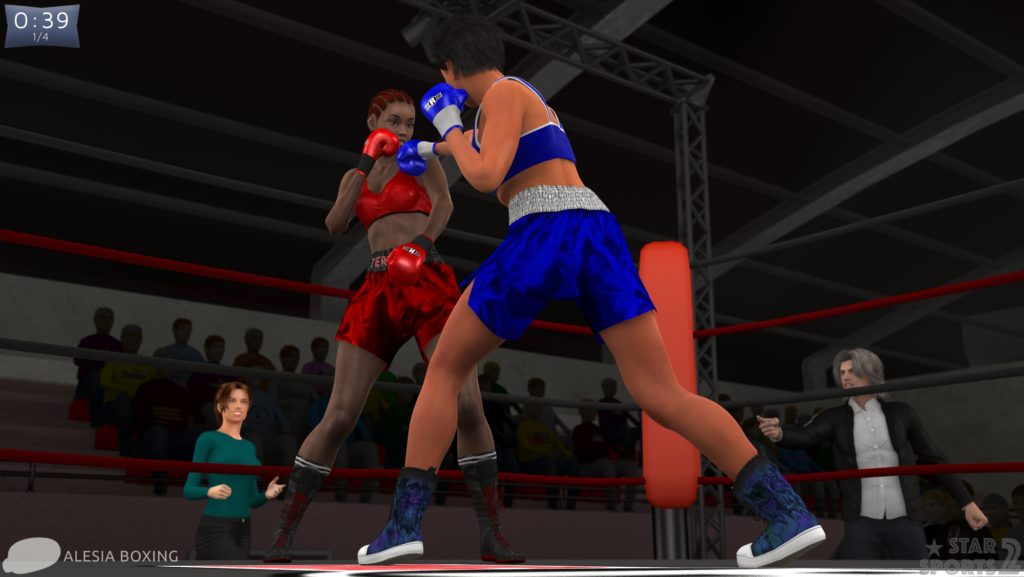 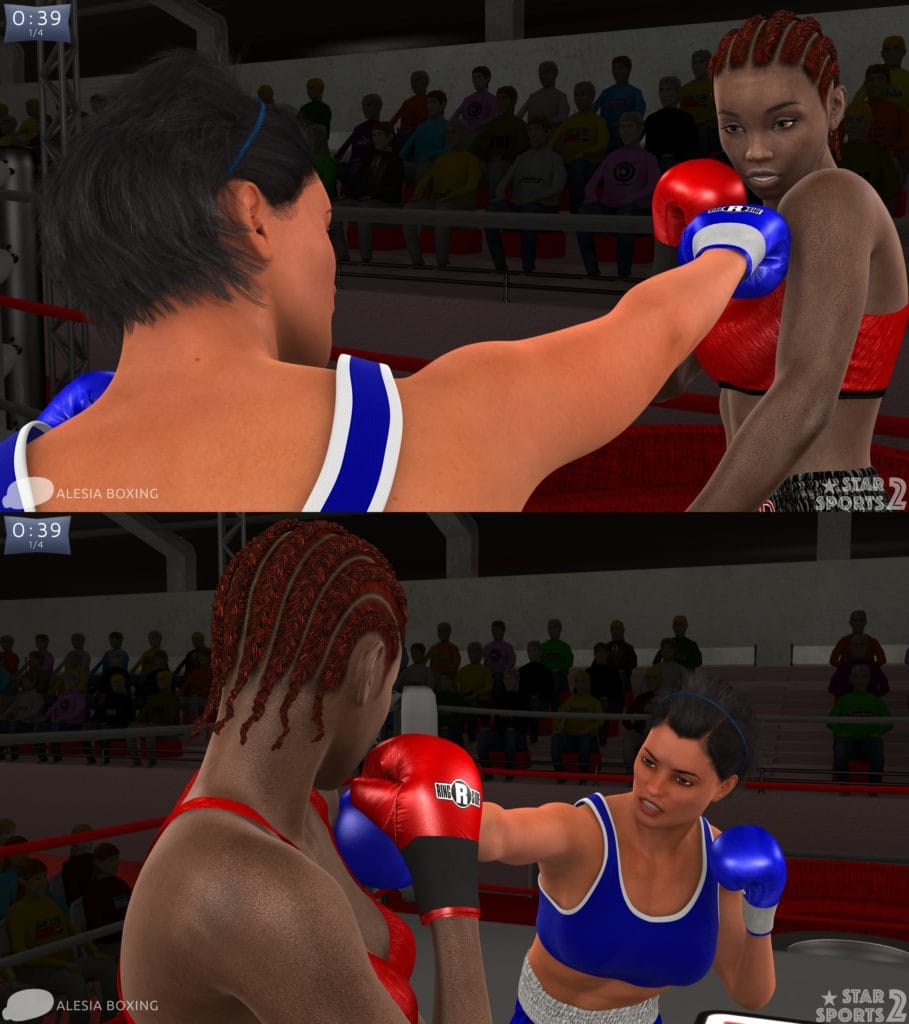 Embolded by a clean shot that landed earlier, Caitlin embarks upon an offensive boat to try and take the round from Mercedes.

The San Diego girl counts on her proven stamina to come forward and throw punches. In response, Mercedes lets her instinct and athleticism dicate reactions to move fluidly around the ring. Caitlin hits gloves, but she finds it hard to make leather meet black skin.

Caitlin gets a bit more desperate to land blows to score points. She chases with more intensity. Close to the red corner, she throws a hard left hand. Mercedes pivots to her left and lets the blue glove fly nearby. When Caitlin’s hand drops, she comes forward with a straight right hand that collides with her opponent’s face.

The crowd cheers a slick counterattack.

Caitlin thinks: “Dammit. That girl is a step above all the others.”

Mercedes thinks: “Focus. Focus. Caitlin is good but my punches are a bit more accurate.”

Jim: “Carter is building a lead. Brown may be wondering if there is a secret backdoor to open Carter’s defense.”

Warren: “So far, Carter has done everything a little better than Brown. If I were her coach, I’d want her to take the body to try and slow down that Formula One racer. She has the power to hurt and she may be wasting it by headhunting.” 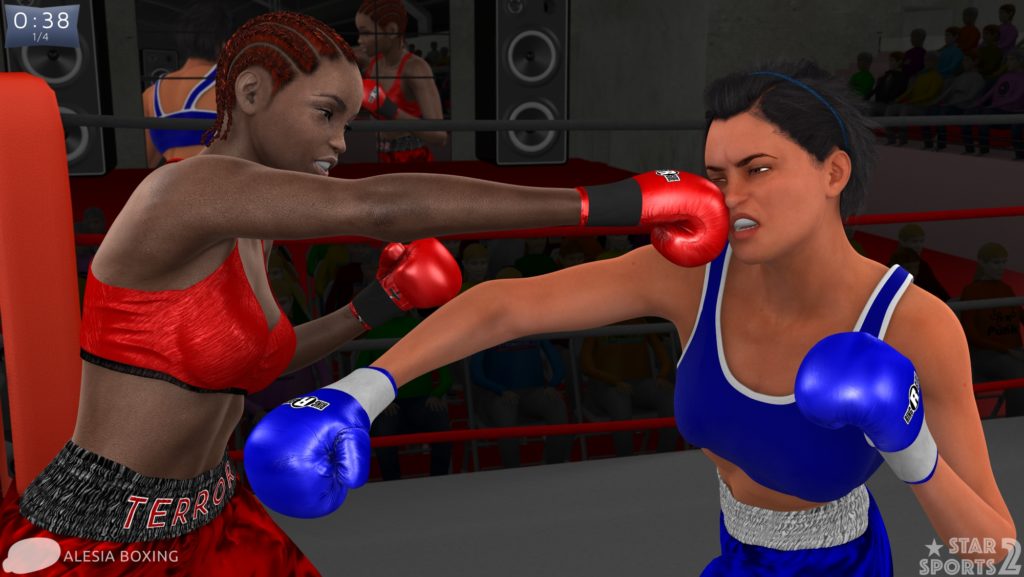 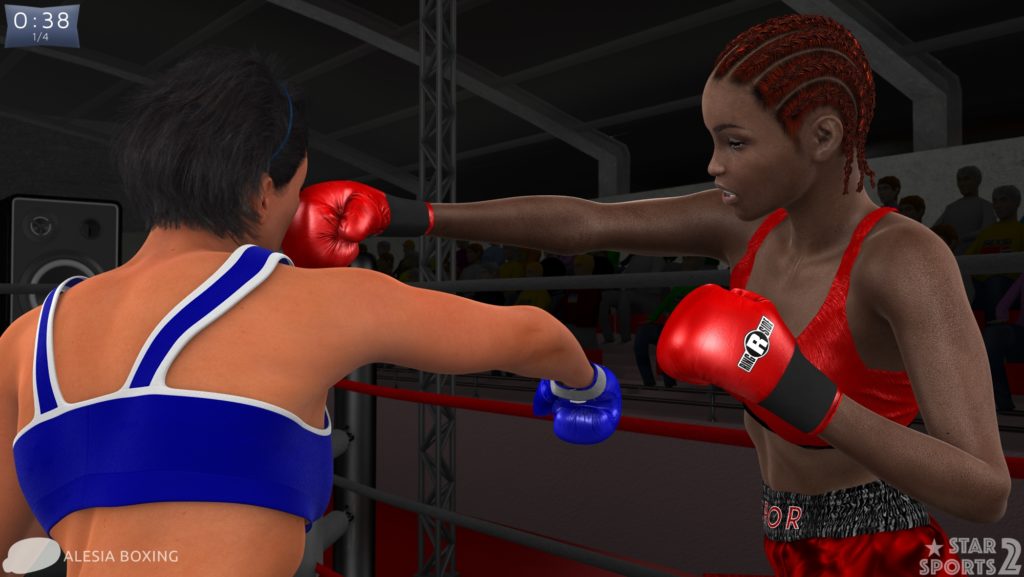 Caitlyn working to catch up

The clock is ticking and Caitlin knows she may lose the round on points. She becomes more aggressive.

By now, she stalks Mercedes everywhere in the ring and throws quick straight shots. The pressure forces the girl from Detroit to put her hands up high and block punches. Mercedes feels Caitlin’s power through her red gloves. The hard shots sometimes force her upper body back, and produce heavy leather against leather impact sounds.

Mercedes thinks: “Geez. She’s a real puncher. I can’t let her bully me.”

Caitlin goes for a fake. She puts her feet firmly on the canvas and throws her right hand forward as if she were to go for the cross. Mercedes fires a defensive jab that should at least annoy Caitlin. The Witch pulls her right hand back and pivots for a swift left hook that cracks Mercedes in the jaw.

Jim: “Brown tries to make an late impression on the judges. Landing clean punches near the end of a round could allow her to steal the points.”

Warren: “If there is a chink in Carter’s armor, it is tactics. Most amateur fighters don’t have what it takes to take advantage of such a weakness, but an elite competitor like Caitlin Brown could pull it off. Not in one round, but perhaps later in the fight.” 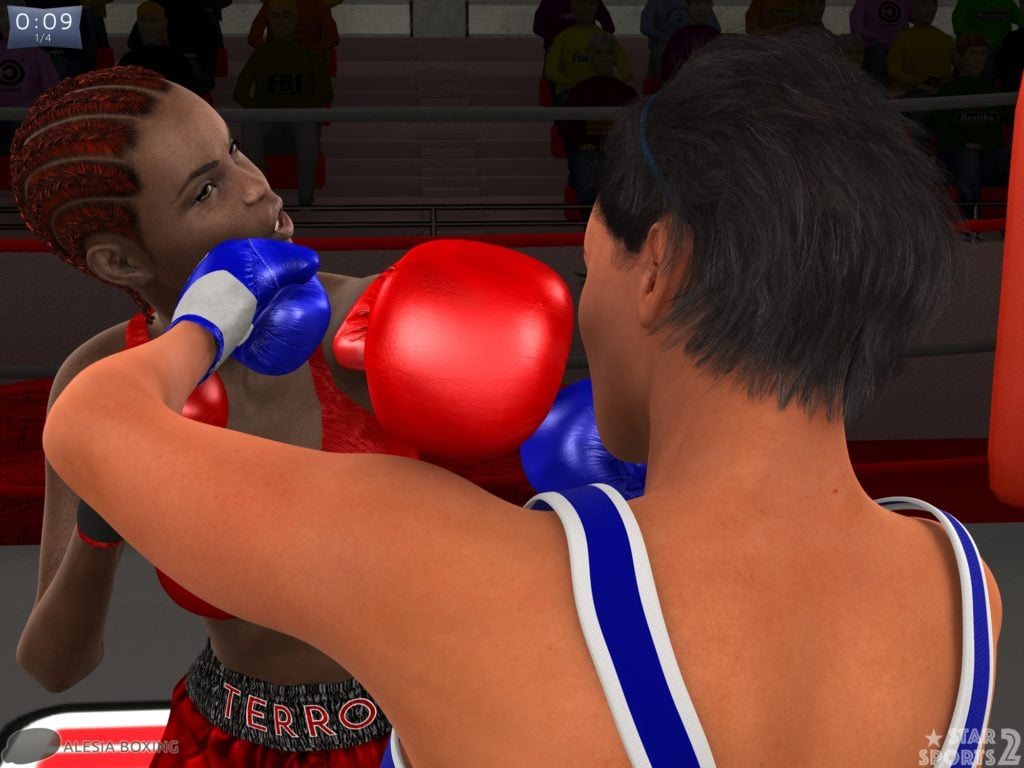 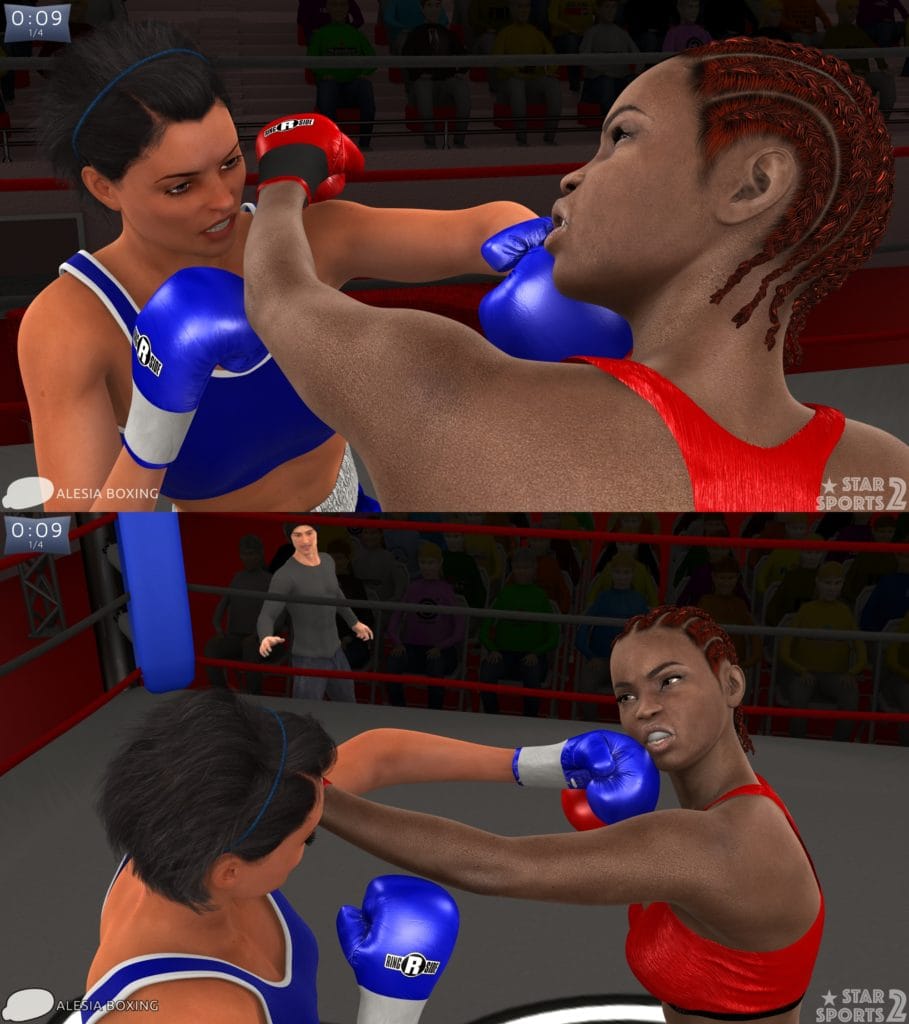 Mercedes pulls out of the corner quickly after getting smacked in the jaw. A few seconds are left in the round and pressure is mounting.

Shortly after her escape, she reaches the middle of the ring and Caitlin is in her face again to throw an evil right hand. Mercedes steps back and leans backwards to make it miss.

Caitlin has overreached and her hand drops. Mercedes surges forward with a short right hand between the eyes. Smack! It crushes Caitlin’s nose.

Mercedes follows up with a left hook but Caitlin ducks under it and the bell rings.

The crowd applauds high-level action as the boxers return to their corners. 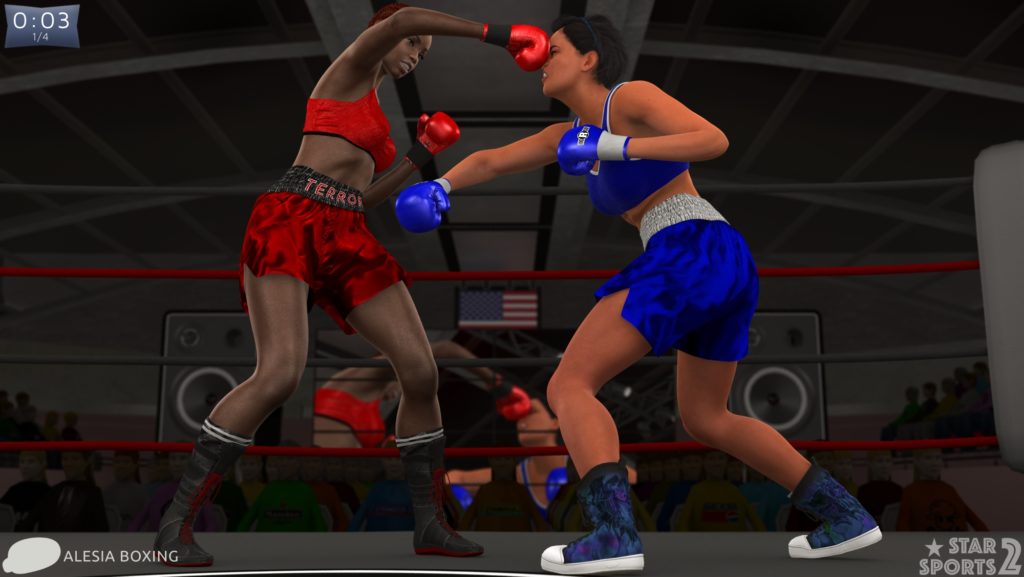 Jim: “The round ends with a warning shot and Carter sending the following message: follow me too closely and you’ll regret it.”

Warren: “Pressure is obviously useful in boxing, but you can’t put too much of it in the plumbing unless you want to see the pipes explode.” 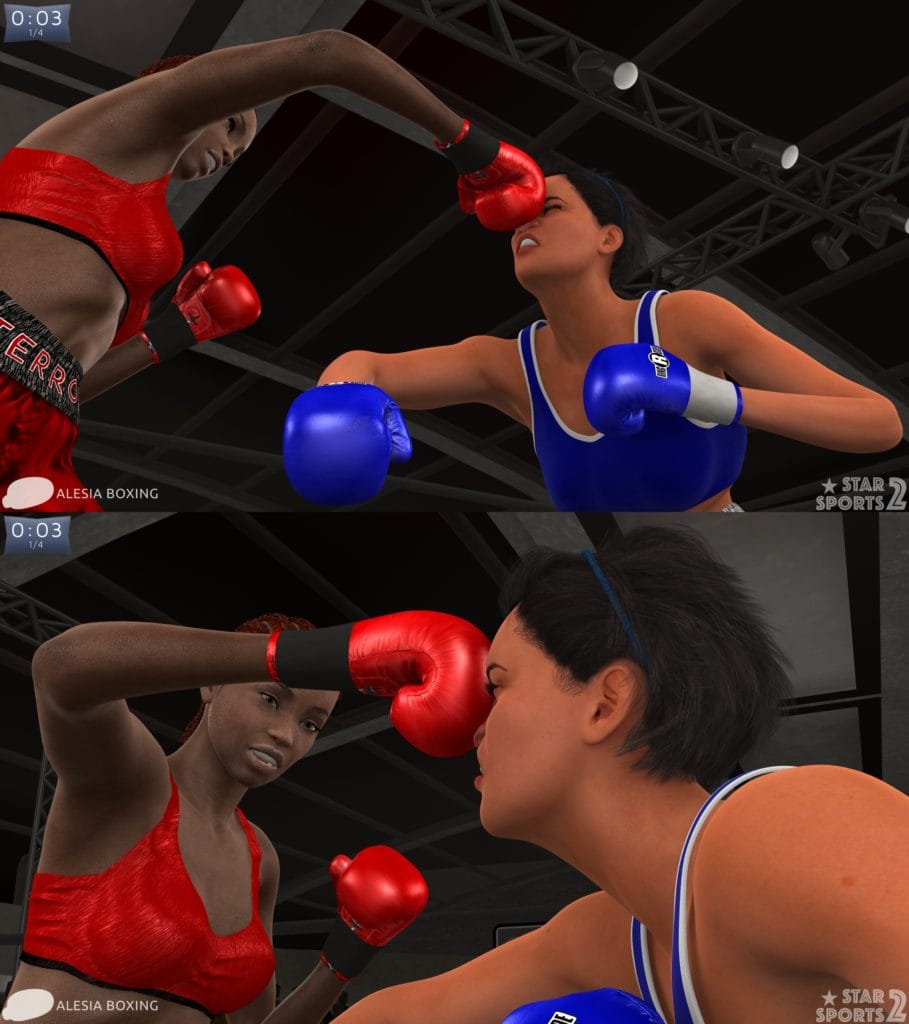 Jim: “Round 1 is in the books and the corners get to do their work. The official score is 10-9 for Mercedes Carter.”

In the red corner

Carl: “Alright, kid. Ya got this round. Ya did well. I like how ya used angles and space to counter. She be a puncher and she be hard to hurt, so ya can’t afford to do anythin’ stupid. Yagotit?”

He gives her water.

Carl: “Now, I wanna see a bit more sideways movement from ya. She be very good at comin’ forward but a lil’ step to da side and ya can avoid gettin’ tagged. Da punches ya don’t eat are more important than da ones ya land.”

In the blue corner

Nathan: “No no no. You got almost everything wrong in that round.”

Nathan: “You were too eager to get your punches in, and you made big mistakes. That’s why she hit you so often and that’s why we’re behind. Only by one point, but you know there’s little time in these four-rounders.”

He gives her water.

Nathan: “To hurt this girl, you have to set up patterns to bait her. She’s looking to hammer you with her right hand, so work on it. Be quick to come in to take the body with your left. Do it well a couple of times and she’ll try to catch you on the counter with her cross. When she does that, fake the body shot, let her commit and hammer her with a right hook.”

Nathan: “Vary things a little in the exchanges, but establish that pattern for the big shot. Lay that trap.” 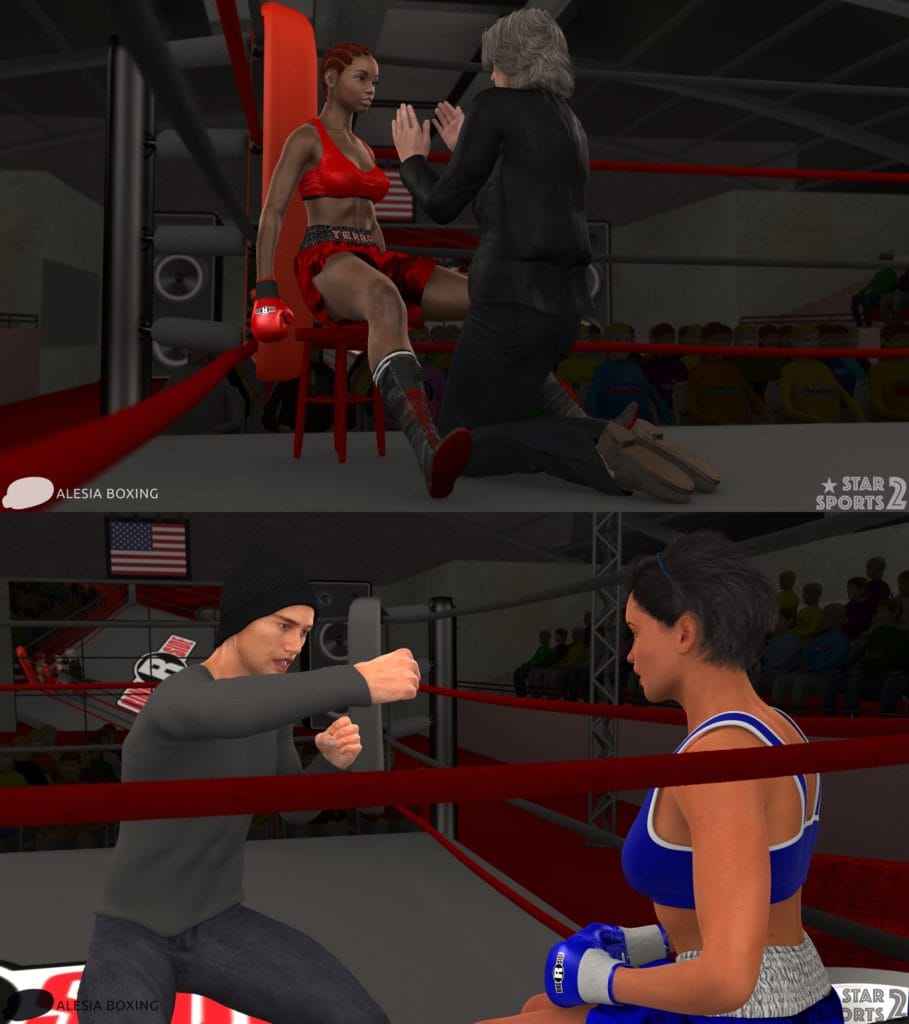 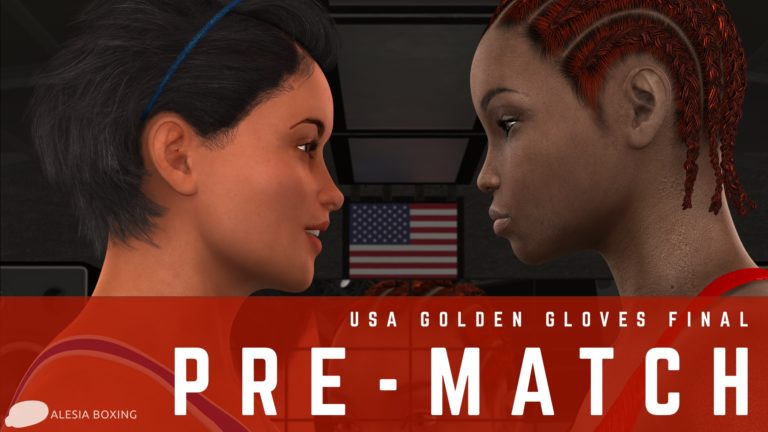 Near disaster: Mercedes Carter vs. Caitlin Brown – Round 2 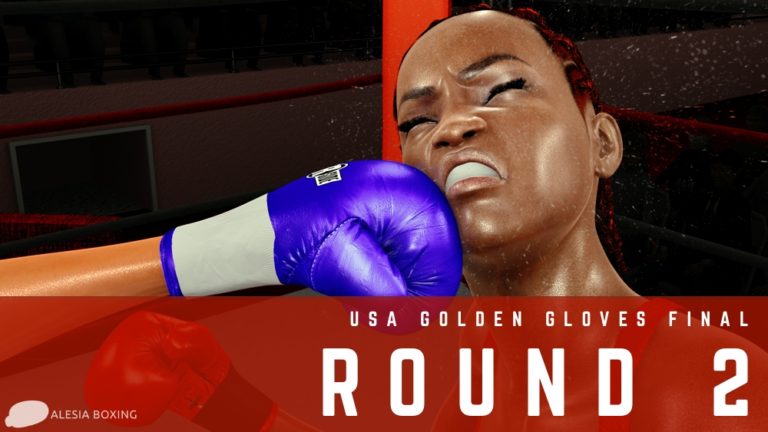