A little over a week before Emma’s fight with Astrid Olsson, Emma is to have her a last ‘full strength’ sparring session with her friend, Virani MacVicar.

Thomas has asked Virani to imitate Astrid’s fairly unique, aggressive style, but to also make sure that she keeps her power under control, there is no need to risk Emma’s health so close to the fight. For Emma, Thomas has asked Emma to go ‘all out’ – to fight as if she was actually fighting Astrid (while holding back on actually clocking her friend).

For the first minute of the session, Virani struggles to imitate Astrid’s unorthodox offensive style, and Emma is able to pick off Virani with a strong jab and punish Virani’s aggression whenever she oversteps. But the Canadian champion settles into the style, and starts using her footwork and movement to put Emma under pressure. The second half of the round is a strong one for the Canadian Cobra, as she keeps the pressure up on Emma and starts to make the Englishwoman miss, while landing punches of her own.

In between rounds, Thomas attends to both sparring partners. He goes to Virani first. “You hate this style, don’t you?” he asks.

“100%” replies the Canadian Cobra. “It’s too open, too wild. It’s too much like the ‘old’ me. Getting into exchanges and awkward positions. Not what I like doing anymore.”

“Keep it up,” encourages Thomas. “Keep using your feet. Pressure Emma into the ropes…I want to see how she’ll react.”

Thomas moves across the ring to speak with Emma. “Good start,” he says appreciatively. “But you need to be smarter with what spots you are picking. We don’t want to get into a firefight. Move. Counter. Set your feet occasionally, but be elusive.”

The second round has Emma shifting tactics. She stays very passive, looking for opportunities to counter Virani’s aggression. The Canadian Cobra spots this, and uses it to her advantage, bullying Emma into the corner and then using her advantageous position to land solid blows to the Englishwoman. Under pressure from Virani, Emma struggles to get out of the corner. She doesn’t have enough space and time to land counters, and when she tries to clinch to escape, Virani uses her physical strength to shove her back into the corner. It’s over a minute before Emma can finally escape the corner. Throughout the rest of the round, Emma does better, trying to combat Virani’s aggression, but she struggles with the fast pace set by the Canadian Featherweight champion.

In between the 2nd and 3rd rounds Thomas flashes a thumbs up to Virani, before going over to Emma, who looks downward at her shoes in disappointment at her performance.

“You’re too passive,” Thomas instructs his fighter. “I know you want to counter, but you can’t only counter. Passivity doesn’t become you, Emma.”

“If you are giving up the middle of the ring, then you have to move decisively. There is no way that Virani should be able to trap you in the corner like that. You are stronger than her. Remember, we don’t want to get into exchanges, but there’s no reason that you can’t be first. Okay?”

Emma bounces lightly on her feet, “I can do that.”

In the 3rd round, Virani tries to repeat her success of the last round, but Emma provides sterner resistance this time. Emma keeps light on her feet occasionally lashing out with her jab as Virani tries to get inside and occasionally setting her feet and throwing harder punches. Virani has her moments in the round, but Emma is able to take advantage of Virani’s aggression, landing the more telling punches in the round. Late in the round, Emma adjusts further, lowering her stance and inviting Virani to come forward. When the opportunity presents itself, Emma lands a pair of thudding punches to the body. Virani accepts the loss of the round and doesn’t try to force it, letting the time run out.

Thomas goes to Virani first at the interval.

“Do I have to keep up this aggression,” Virani whines jokingly. “She’s going to smack me around.”

“Sorry,” replies Thomas, “But this is the role of the sparring partner. Take one for the team, V.”

Virani smiles and nods. She’s happy to play this role for her friend.

Thomas then goes to Emma. “Okay. Comfortable with this now?”

Emma puts her mouthpiece back in, grinning as she does it.

The fourth round is an Emma round, through and through. Virani’s overaggressive style does not suit her and she finds herself eating punches whenever she tries to attack. The Canadian Cobra is losing a bit of confidence as Emma begins getting the better of everything. But she continues to persist in attacking, as is her role as a sparring partner.

Late in the round, Virani tries to make an impression. She gets low and fakes a shot to the body, and then goes high with a right hand. Emma reads it perfectly and goes with a right hand of her own. The timing of the punch is perfect, with Emma using Virani’s momentum against her. 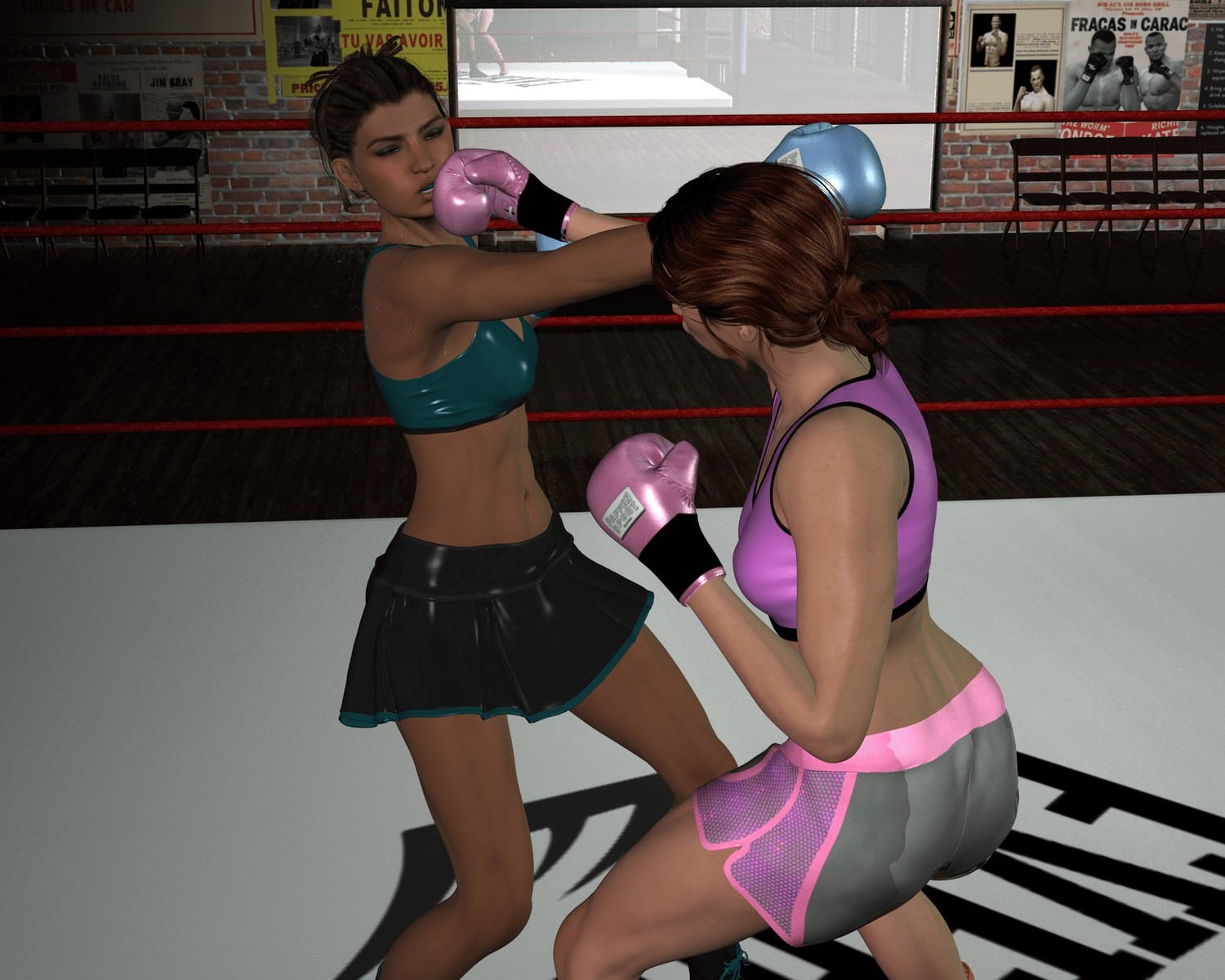 As the loud “pish” echoes around the gym, as Virani’s upper body is forced backwards and her head twists sideways. Virani’s gloves drop and she stumbles backwards on shaky legs, obviously hurt from the perfect counter from ‘The Peach.’

But it is an unnecessary reaction, as Emma is well aware of the effects of her punch. She drops her guard and follows Virani as the Lady Cobra retreats to the ropes to lean on them for support.

“Holy shit,” Virani mumbles to herself. She’s still a bit shaken, even a couple of seconds after the punch landed.

Virani turns around, taking out her mouthpiece, “Yeah….but I’m seeing about 5 of you right now, so I think it’s time to stop.”

Emma feels guilty, “I didn’t mean to hit you that hard…”

Virani shrugs lightly, “It was the timing that hurt me, not the power. I walked right into it. Great punch!”

Emma reaches out to embrace her friend. “Sorry.” 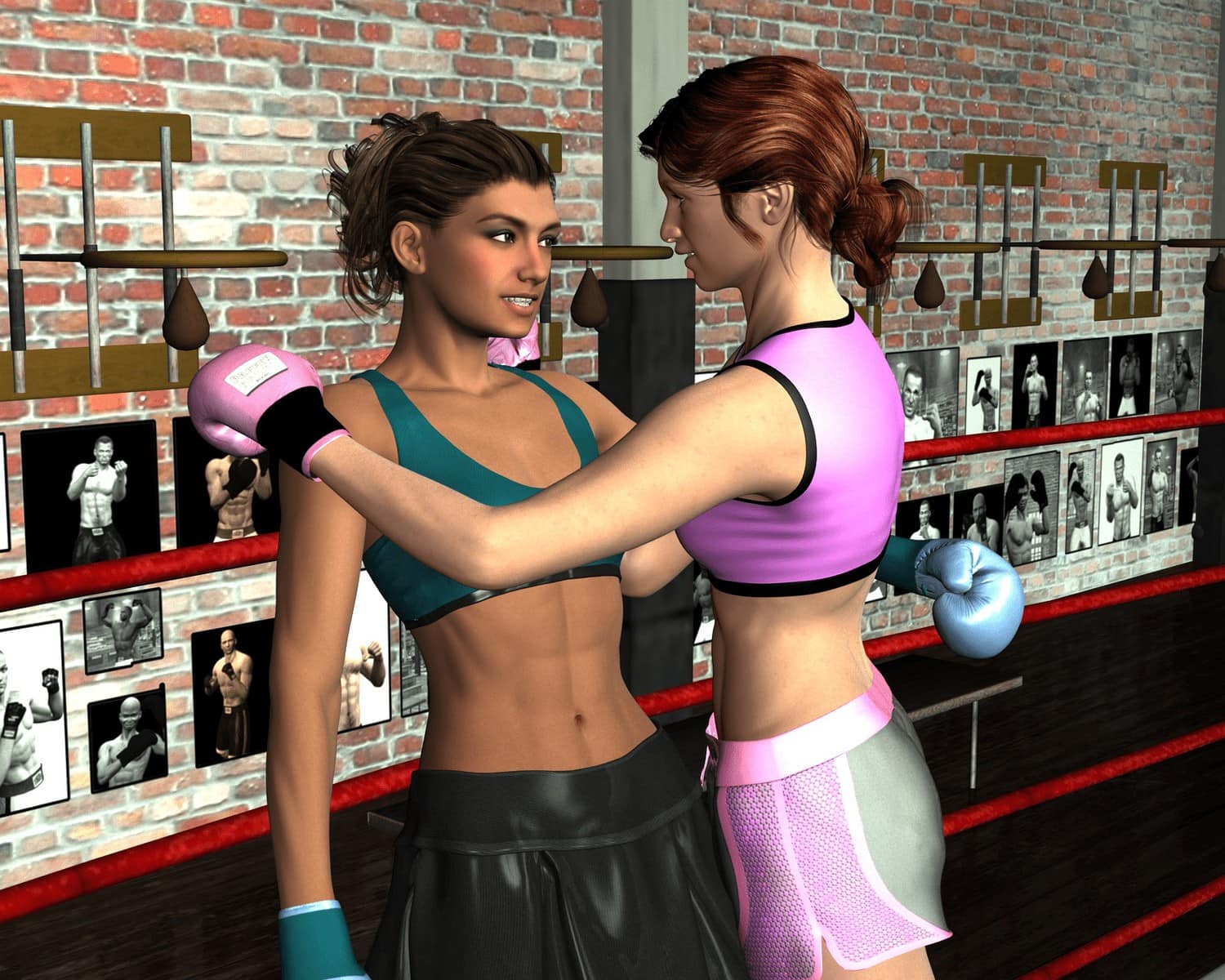 Virani smiles, “Nothing to be sorry for. I think I’ve dropped you in sparring before…this…this is payback.

Emma laughs, “So, am I Canadian champion now?”

Thomas interjects himself into the conversation, “Nice counter, Emma. Virani, can you keep going?”

Virani shakes her head, “No. I got my bell rung, time to stop. Emma is the winner by TKO,” she laughs.

Thomas isn’t as amused as the two women are, “Well, in that case, this was supposed to be 10 rounds. Emma, get in front of the mirror and finish the rest of the fight by doing shadowboxing.”

Emma’s shoulder slump for a moment. “Okay, coach.” Emma and Virani tap gloves before Emma exits the ring and begins vigorously shadowboxing in front of the mirror.

Thomas helps Virani remove her gloves as they both watch Emma shadowbox. “You okay?” he asks.

“Yeah,” Virani replies. “She stunned me really good with that counter. I reckon she would have sent me to the canvas with a follow up had this been a real fight.”

“You are lucky Emma’s not that powerful,” said Thomas. “She caught you absolutely flush.”

Thomas finishes removing Virani’s gloves and the Canadian Featherweight champion begins undoing her handwrappings, “So, what did you think of her?” asks Thomas.

“She’s improved quite a bit recently.” Virani responded. “When things are going her way, she’s quite strong. She adapts well. She doesn’t have my gifts. My power or even my speed, but she might have better fight intelligence than I do.”

Thomas senses a bit of hesitation from his protege. “But?”

Virani bites her lip for a moment, watching Emma throw a jab and then slip neatly to her right. “But this will be a test for her. A TV fight. A decent, if flawed opponent, and there’s a lot of pressure on her. If she doesn’t win…what will happen to her career? I know that I’d be happy to help keep it going, but there’s only so many losses a fighter can take before their confidence goes. And Emma’s never been the most confident.”

Thomas nods, “She can beat Astrid. She’s better. She’s a top 15, top 10 featherweight, potentially. But Emma’s better in sparring than she is in her actual fights. I’m not sure if she’s holding something back, but in training she shows talent and then in the ring she seems…less.”

“I agree. There’s only so much you can do, Tom. At the end of the day, it’ll be up to Emma to prove she belongs in that ring.”

The two Canadians watch in silence as Emma continues to shadowbox. After a few minutes, Thomas silently slips away from Virani to discuss a flaw in technique he sees in Emma. The Englishwoman nods at her coach, and goes to work on fixing her little mistake.

Virani is nervous for her friend going into this fight with Astrid. Though she’s just gotten a first hand taste of how good Emma can be, its only natural for her to worry. But she knows that she’ll be there to support Emma, in this fight, the next fight and any others that Emma has. Because that was what friends do. 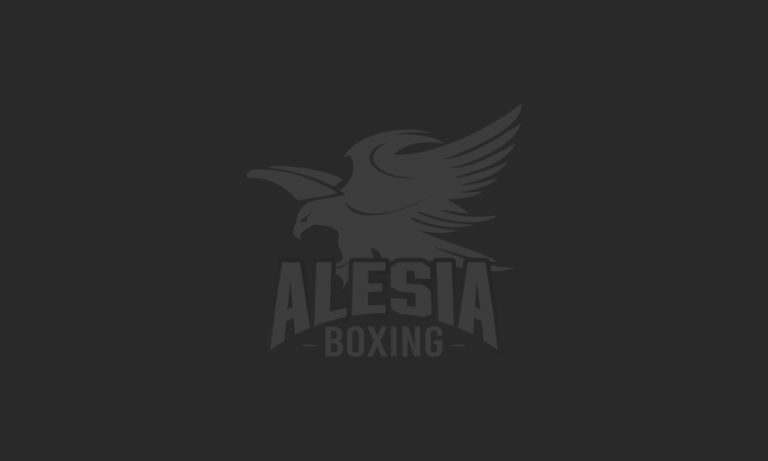 Emma McGale vs. Astrid Olsson – Intros and Round 1 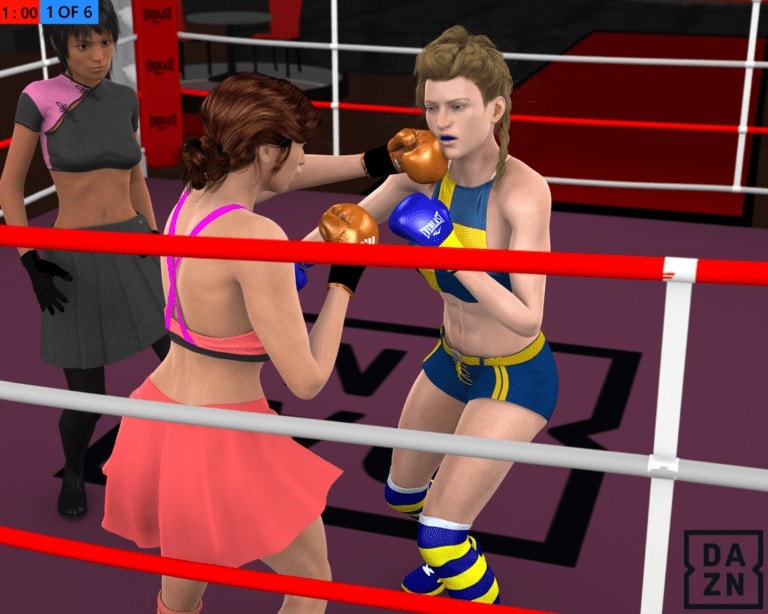 Emma McGale
Profile
A self admitted boxing nerd and friend of Virani. Especially powerful and dangerous working from in close Super Featherweight contender.
Support us
RSS Twitter
Contact PRIVACY
Characters and brands owned by us unless credited otherwise. Real-life elements used only for artistic purposes. You are NOT authorised to make derivatives. Icons credit: Font Awesome.
All rights reserved