The 4th round begins and it does not take long to establish that Emma McGale is still being affected from the punch that sent her to the canvas in the 3rd round. The Englishwoman fights tentatively, pushing and pawing with a jab, and reacting weakly when Astrid threatens her.

The Swede quickly takes notice of this and Astrid needs little invitation to be aggressive and lands a god jab to the body to start the round, which further deflates Emma.

Emma thinks: Astrid is just all over me, I can’t keep her away…I’m still hurting…

The Swede continues to be aggressive and this time she sets her target higher, faking another left hook to the body before transitioning to a left hook to the head, which Emma fails to block. It lands with a hard “BAP!”

Commentator: “McGale is off to a rocky start in the 4th round, and she does not look like the same fighter that she was before the knockdown.”

Emma: My body feels week, sluggish. Like I just went for a long jog and now the batteries are drained. 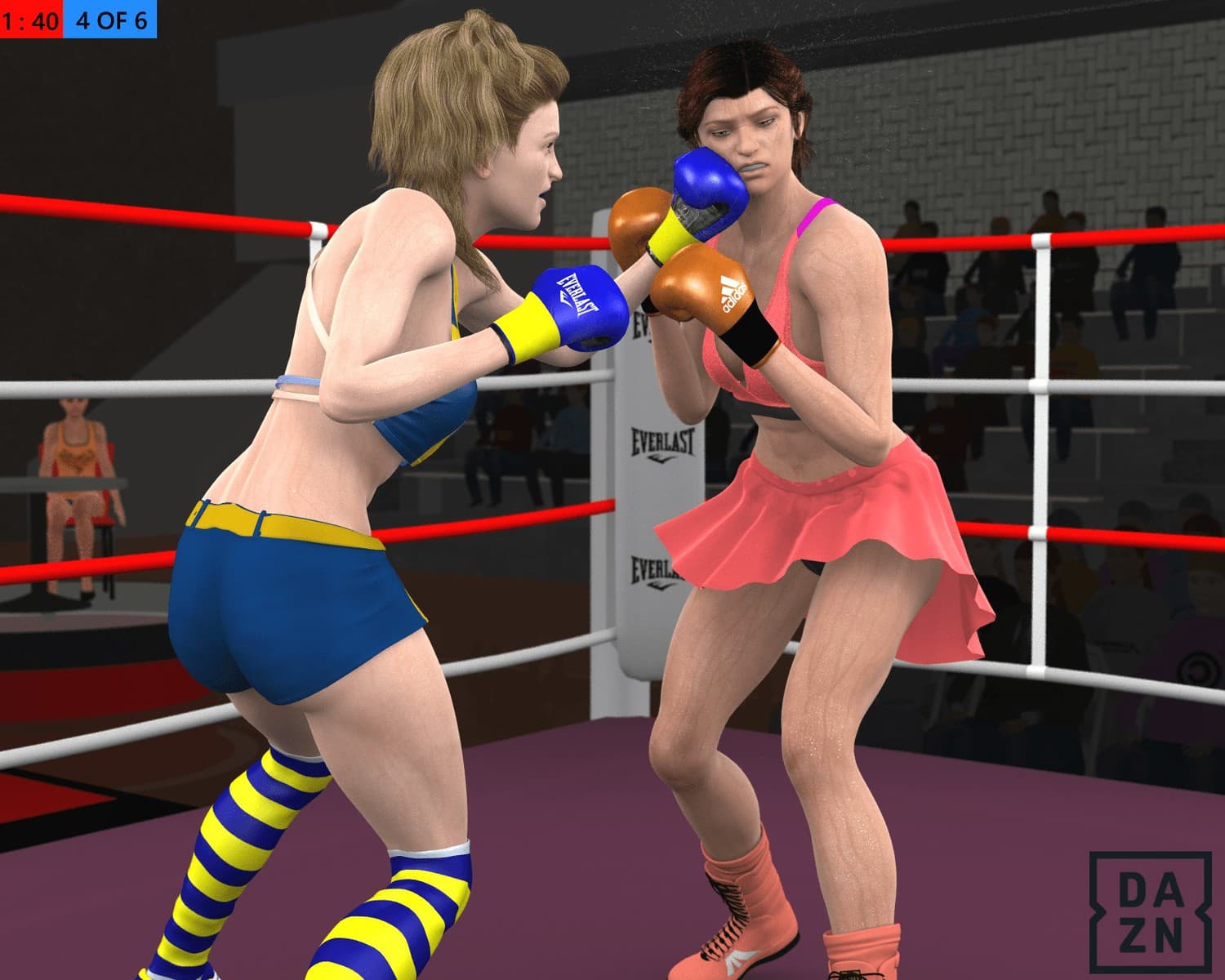 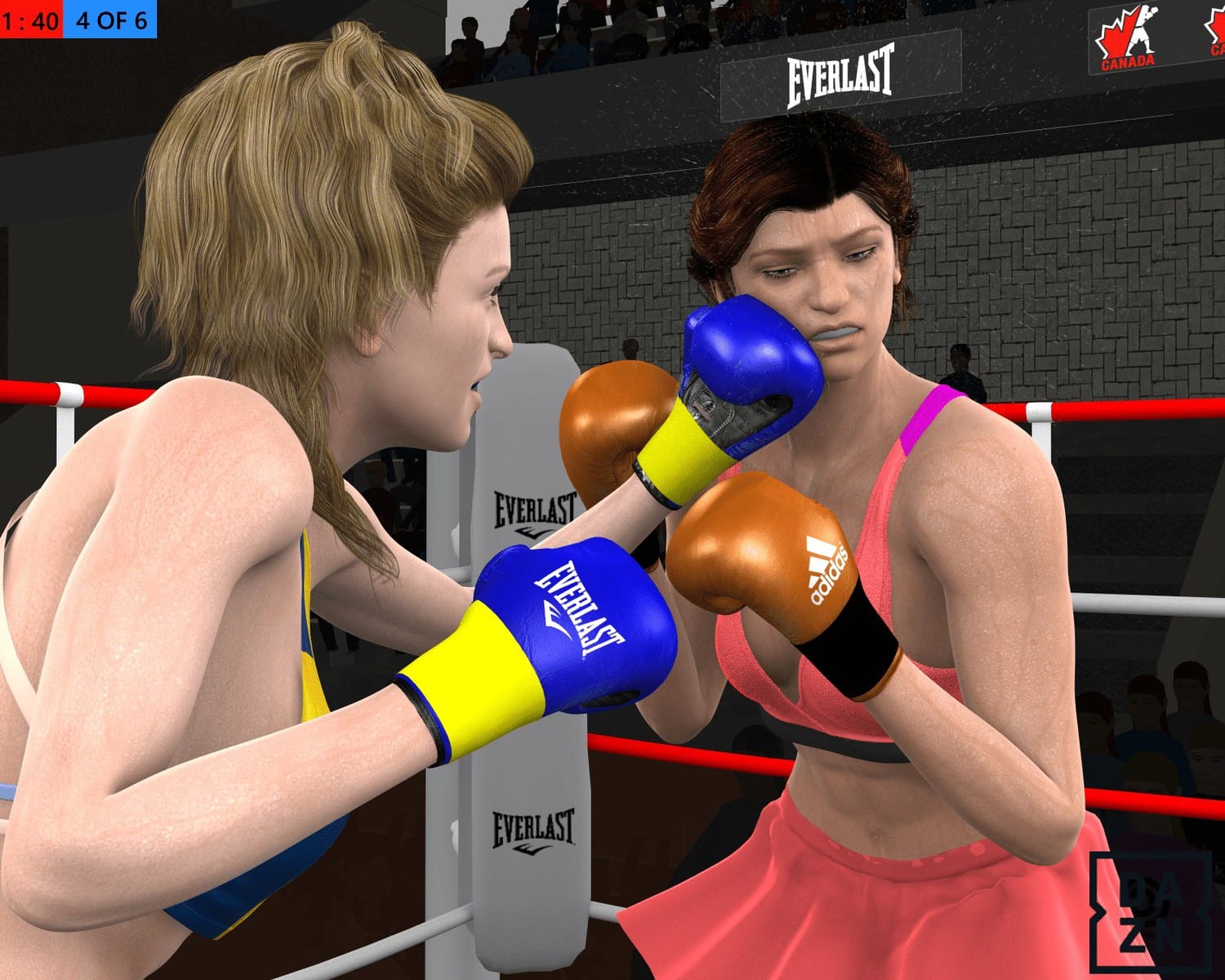 Virani: “Ow. That one hurt. Astrid’s got her moving to her movements, which isn’t good.”

Virani thinks: Fighting hurt is not something you can learn in the gym. Emma’s a quality fighter in the gym, but in the ring…it’s yet to be proven.

Astrid: Emma’s still in trouble, still hurting from that knockdown last round. It’s taken the wind out of her sails. Now I need to pour on the pressure before she recovers.

The tone for the 4th round is far different than the preceding ones. Emma throws few punches, and mostly tries to clinch and waste time. The fire is out of her eyes and she pays the price for failing to match the aggression of Astrid. Previously, she punished Astrid when she tried to get in range. Right now, she is too passive to keep Astrid away.

After ducking out of the way of a few punches, Astrid catches on to that particular ploy, and then catches Emma with a wicked uppercut as she tries to bend down to avoid the punch. Emma’s nose starts to bleed slightly, the first showing of blood in the fight.

Commentator: “We sometimes talk about eating an uppercut, but that was just about what McGale did there. The Englishwoman is a shell of herself in this round and Astrid is pumping in the punches. McGale is just too passive in this round and Astrid will take advantage. The Swede will be heartened by the sight of blood. Swedes are like sharks, for those of you that were not aware.”

Astrid: There’s nothing quite as satisfying as landing a wicked uppercut on your opponent. I think I may have smacked Emma’s nose as well. Bonus!

Emma: “UMMPH!” Oh my goodness that hurt…..I can feel my nose starting to bleed after that punch. What else can go wrong in this fight…. 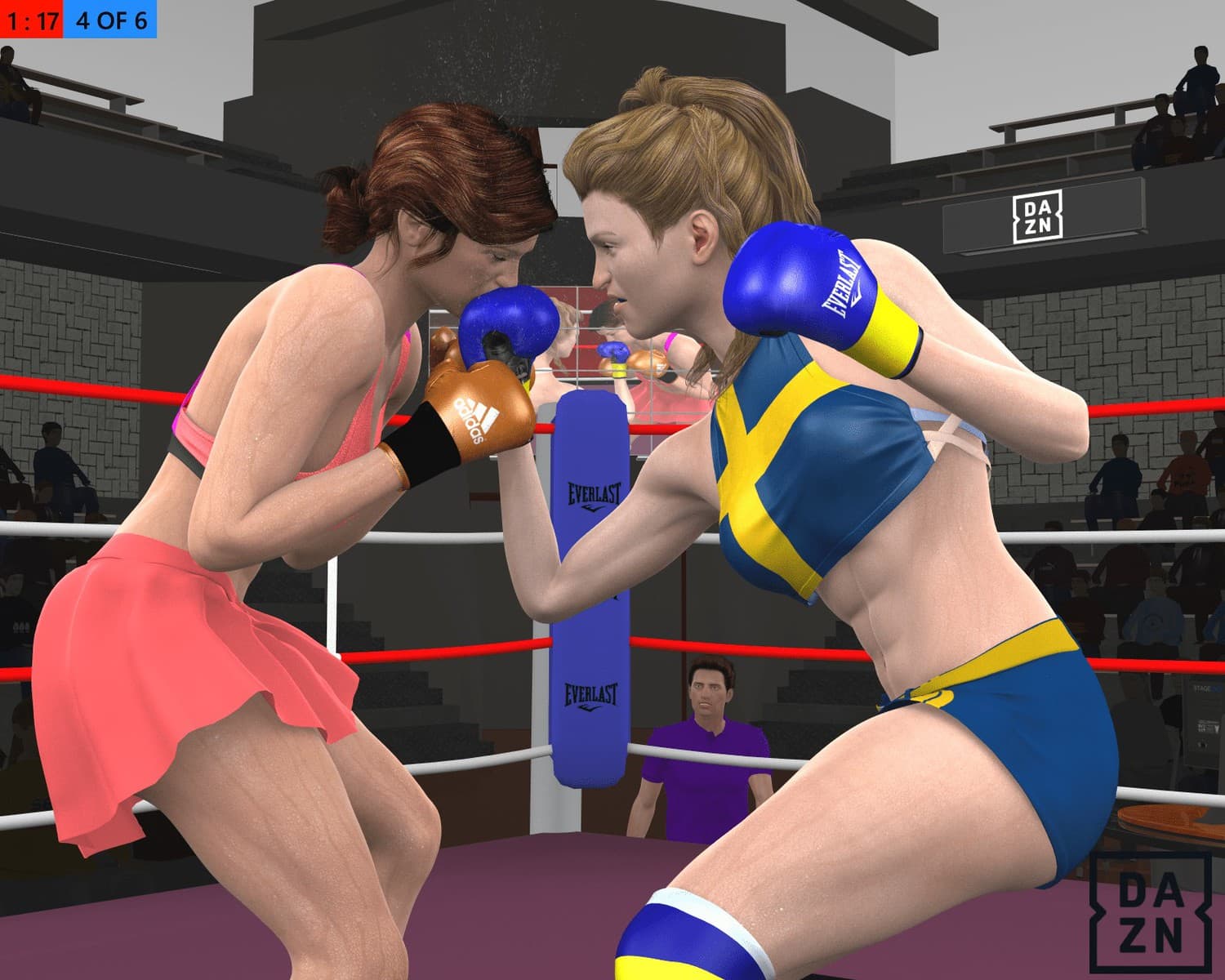 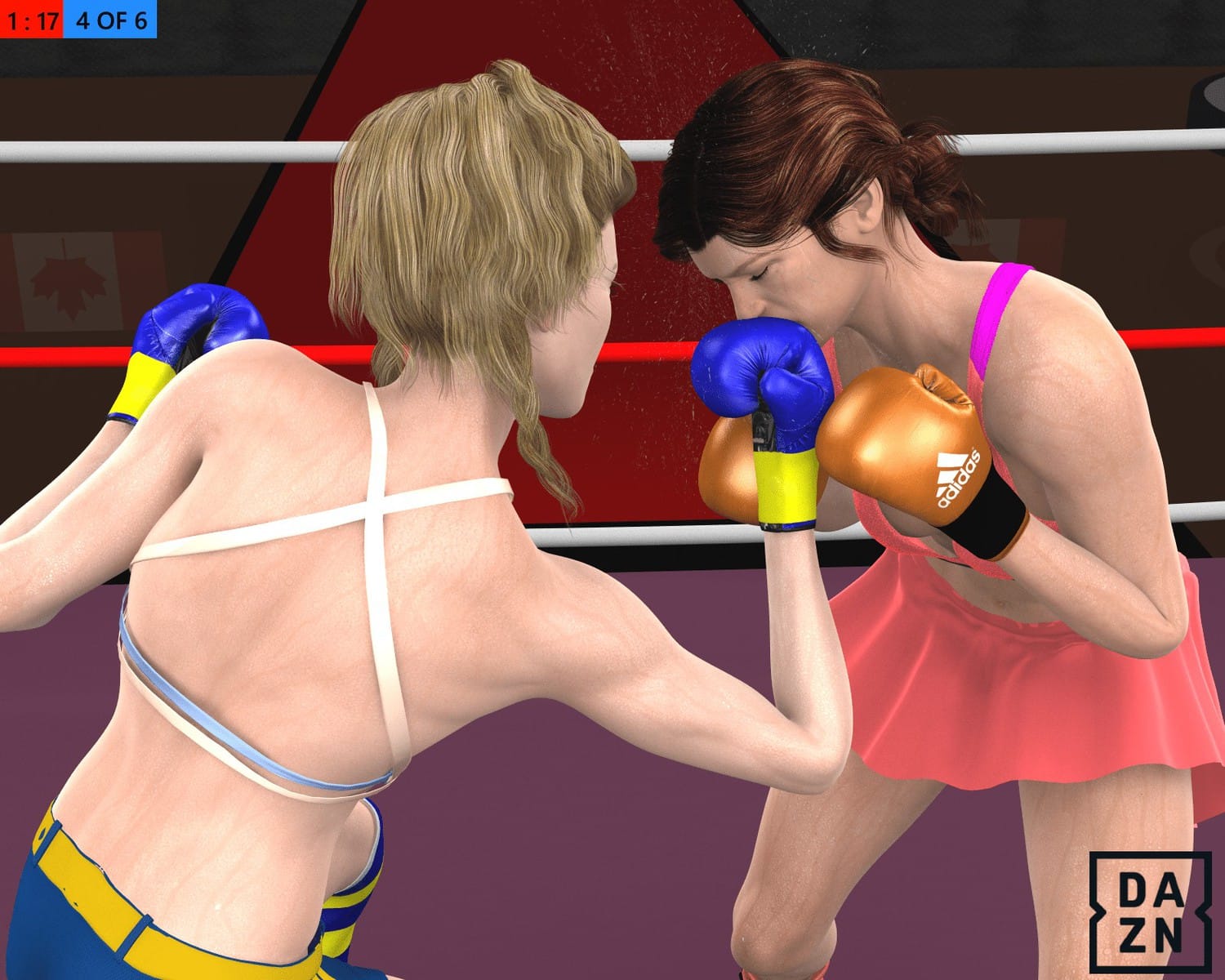 Virani: “I am not liking the way this is going…”

Thomas: “Jab and counter!” What the heck Emma, you can batter this girl if you just use your fundamentals…

The new tempo of the fight continues, with Emma backpedaling and avoiding Astrid as much as possible. The Swede though, won’t let the Englishwoman just run out the clock. She gets aggressive with her footwork, pressuring Emma towards the ropes, where she can finally go to work.

Commentator: “Astrid Olsson has Emma McGale on the run…but there is not very much space to run to in a boxing ring. It seems rather inevitable that the Swedish Sweetheart will catch up…and then she gets Emma in the ropes…and she goes to work. The Englishwoman covers up for a moment, but then bombs start to land for the Swede! Emma manages to escape, but the damage keeps accumulating and Emma just doesn’t seem to have the will to fight back!” 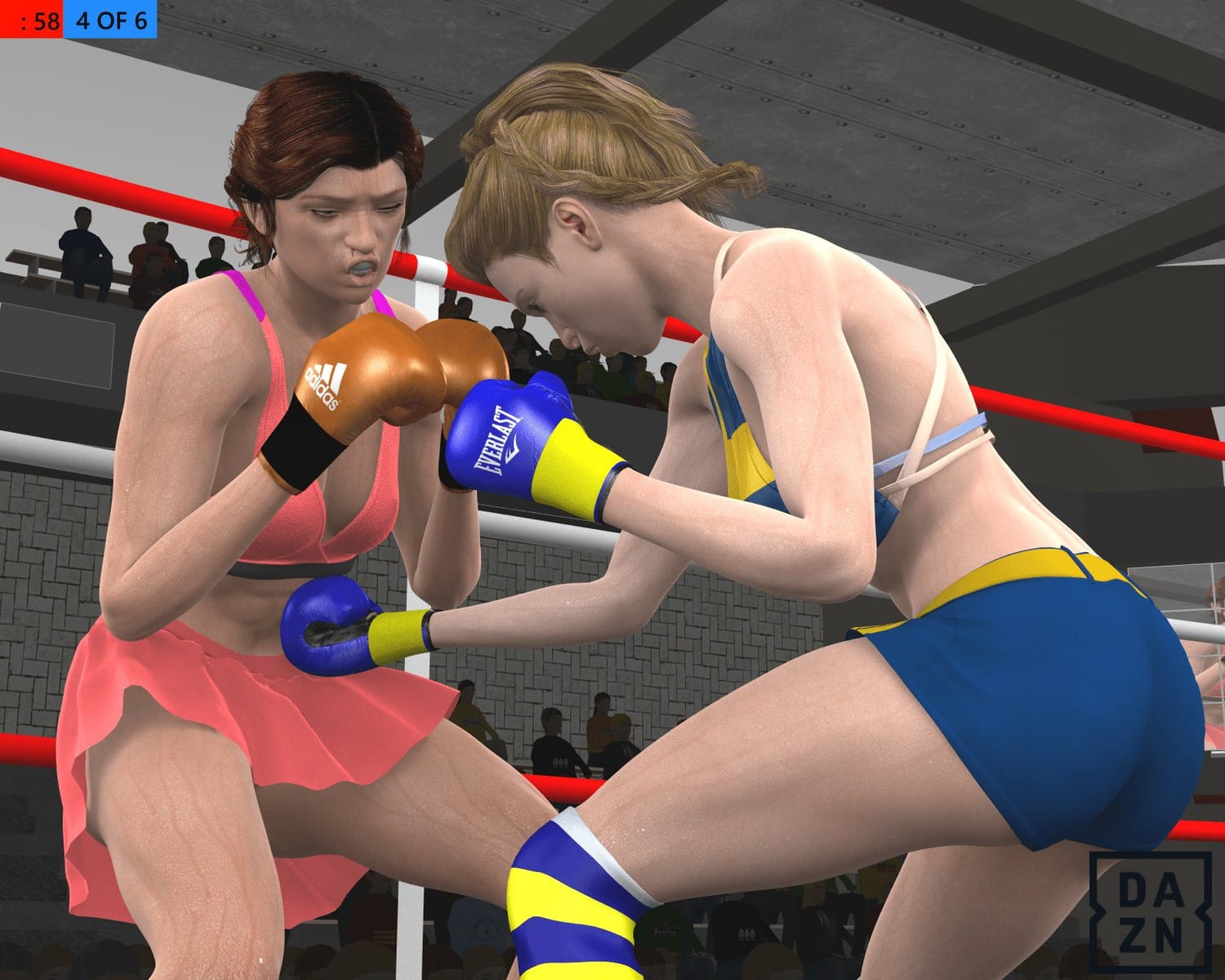 Astrid: The fight is going out of Emma. She doesn’t want to scrap it out with me any more. It’s happened to a couple of the other fighters I’ve faced…and it looks like it is happening again. I can’t give Emma room to think, regroup or breathe, I just need to keep hammering away.

Emma: Astrid is just too big, too strong, too…on me all the time. I can’t get my bearings back, I can barely think. Astrid gets me into the ropes and just fires away. A lot of punches miss…but a bunch land too, including a really good punch to my stomach that makes me regret ever picking up a pair of boxing gloves. I wish this round would end…and I kinda wish this fight would end…

Thomas: “You’ve got to FIGHT BACK, EMMA!”

Virani: “This is…hard to watch.”

Laila: “It seems like the Swede has all the momentum. Do you want one of these ladies to win?”

Spencer: “Nah, I have no preference. I just want a good fight…which I am getting.”

Laila: “You’re cheering for a knockout though, I imagine.”

Astrid is on the ascent for the entire round, and she puts an exclamation point on the round a she gets Emma retreating backwards and then thuds a strong right hand right through Emma’s compromised guard. The force of the punch sends Emma’s upper body backwards and snaps her head around painfully. 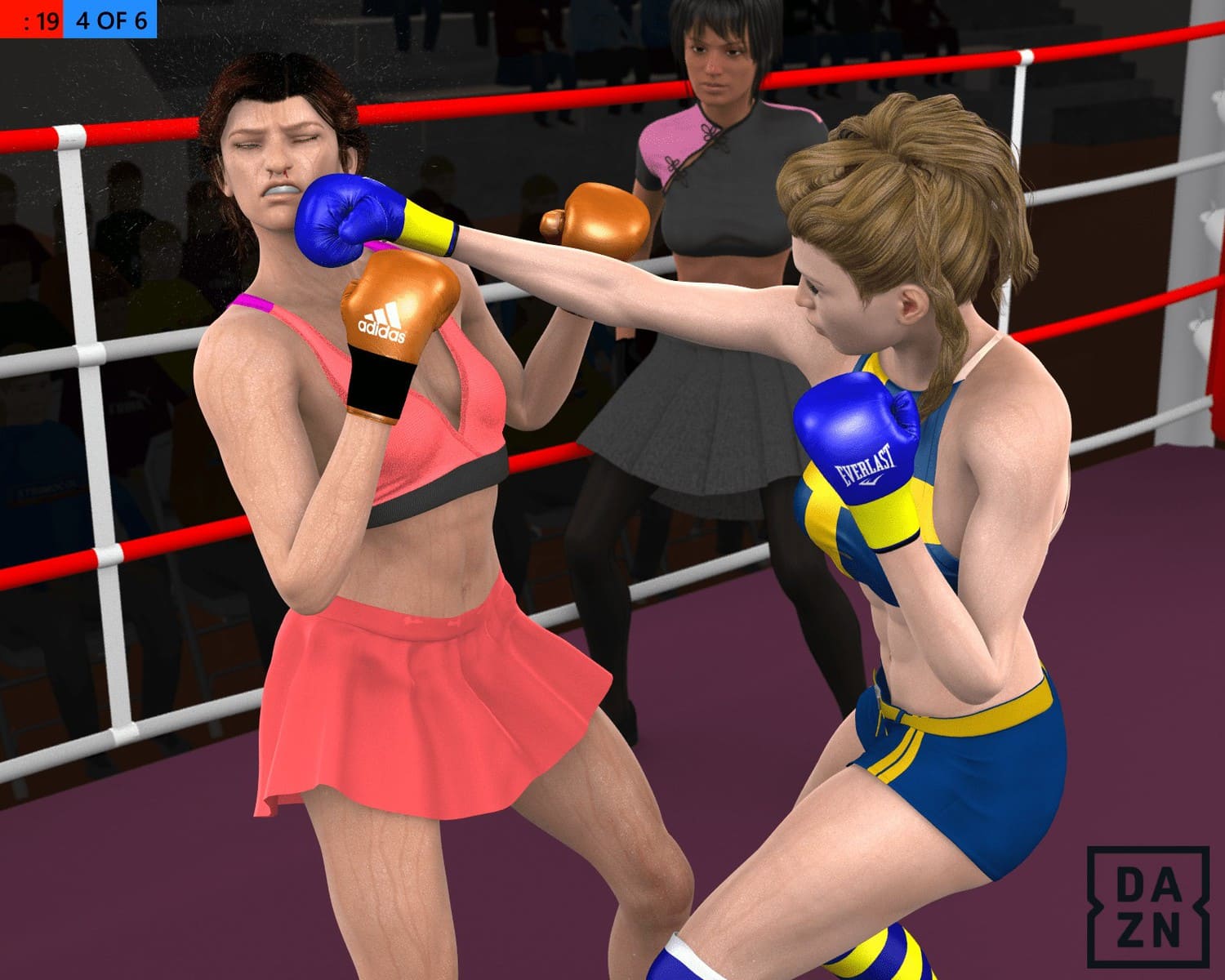 Astrid: I’m finally landing my big punches. Maybe I can put Emma down again and force the ref to stop it. Gotta keep going Astrid. It’s my chance.

Emma: Astrid lands a huge punch, and my knees buckle for a second….

Virani: “Clinch! Tie her up, Emma! Jeezus Emma, fight back!” 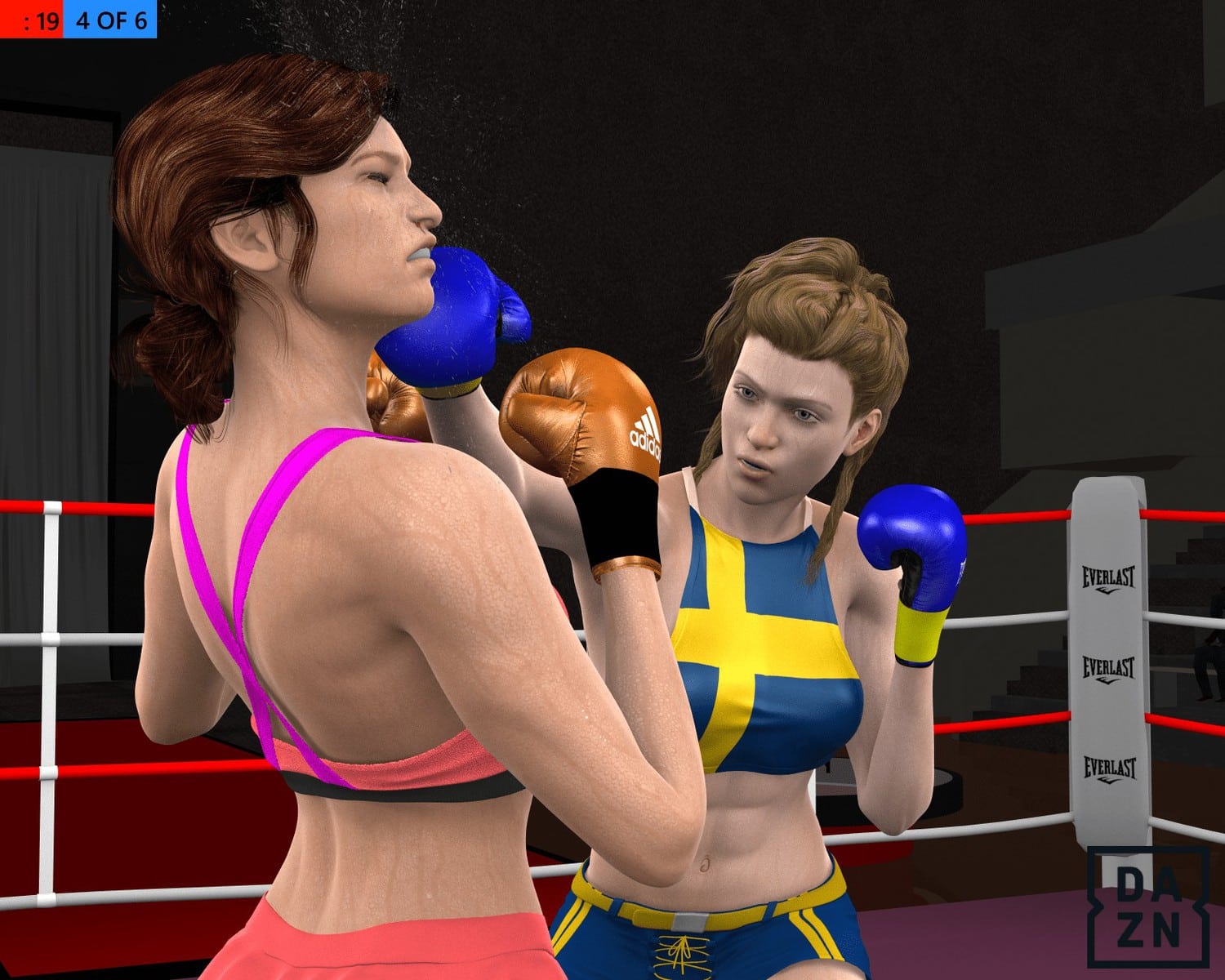 Having being battered around the ring like a discount pinata, Emma is starting to fall apart. After eating yet another punch from Astrid, ‘The Peach’ just leans into Astrid and hangs on, too hurt, both mentally and physically to continue to scrap it out with the Swede.

Commentator: “McGale manages to tie up Astrid Olsson to get a respite from the beating she is enduring from the Swede. As bad as this round has been, getting a clinch might be the best thing that McGale has done in this round, which tells you everything about how successful this round has been for her opponent. 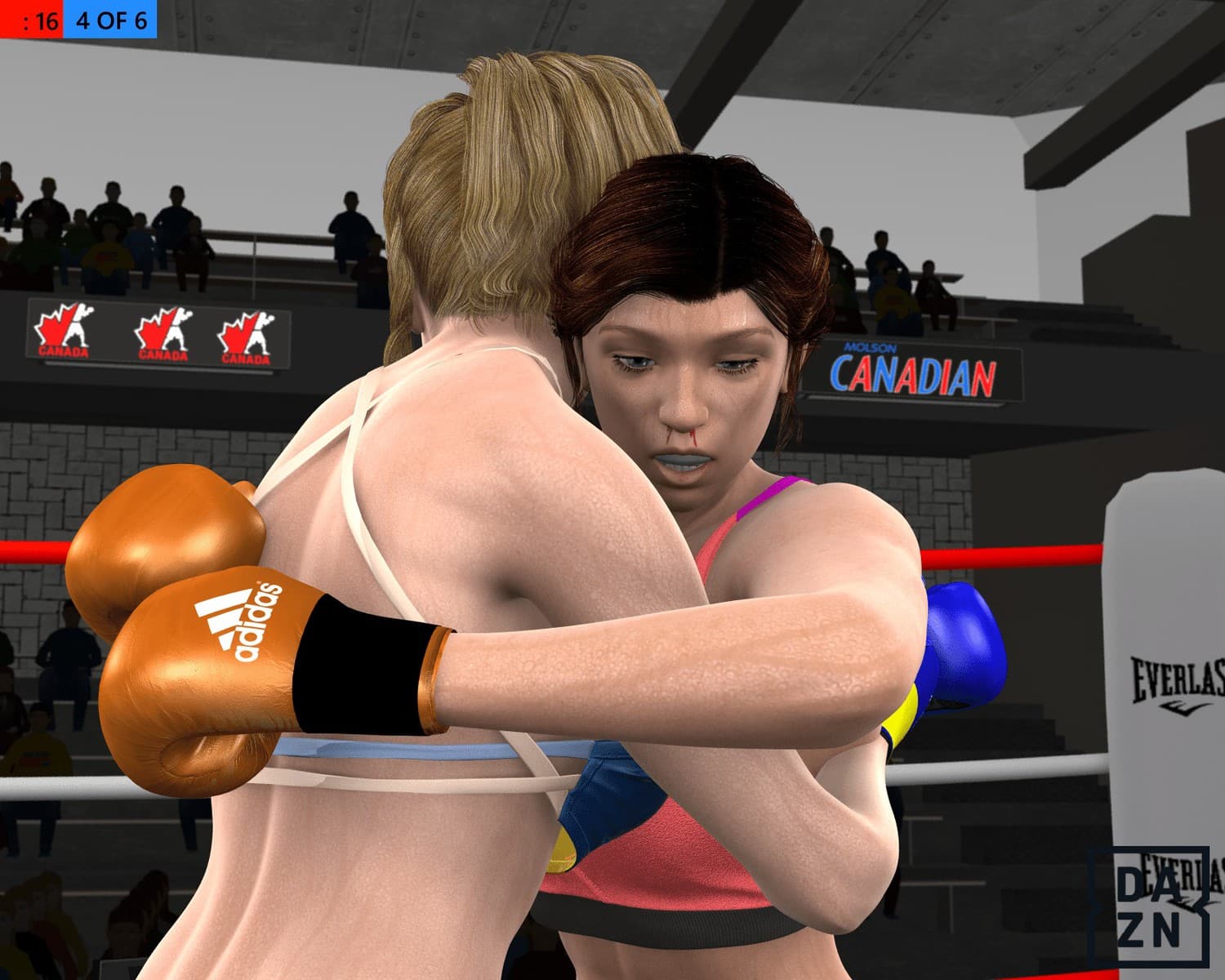 Astrid: I think that Emma is just about out of gas. She hasn’t been able to hit me on the counter like she has previously. It feels like she might be done.

Emma thinks: This was a round from hell. I don’t know what else to do…I’m still hurt. Astrid hurt me more…

Commentator: “That was a totally dominating round from Astrid Olsson, and Emma McGale was lucky to survive the two minute barrage from the Swede. One even has to wonder if the referee will let this continue.”

Commentator: “An unmitigated disaster of a round for Emma McGale has tilted the scorecards in the favour of Astrid Olsson. I have it 38-37 for Astrid after the 3rd round knockdown and a dominant 4th round. One will have to question if referee Kanti Agrawal will let this fight continue much longer, because the last round was just completely one sided for Astrid and McGale seems to have lost the will to fight back. It seems like Kanti may be delivering such a message right now.”

Thomas: Emma gets into the corner and sits down without a word. She looks tired. Done. She fought like she was done. Is she though? I don’t think so. I see Kanti making her way over to us. That’s not good.

Kanti: “Listen, if you don’t fight back, I’m going to stop this. Understand?”

Thomas: “We get it. Thank you.” Kanti leaves.

“Em…are you okay, do you want to keep going?”

Thomas: “No, you are letting her beat you up. You’ve volunteered to be a punching bag and you are upset that she’s dominating you?”

Emma: “She’s all over me. She’s bigger…stronger…”

Thomas: “And worse than you! She landed one punch that hurt you, but you’ve decided to pack up shop because of it.”

Thomas: “BOXING hurts, Emma! The other girl you are fighting trains as hard as you do and wants to beat you just as much as you do. It’s not supposed to be easy.” 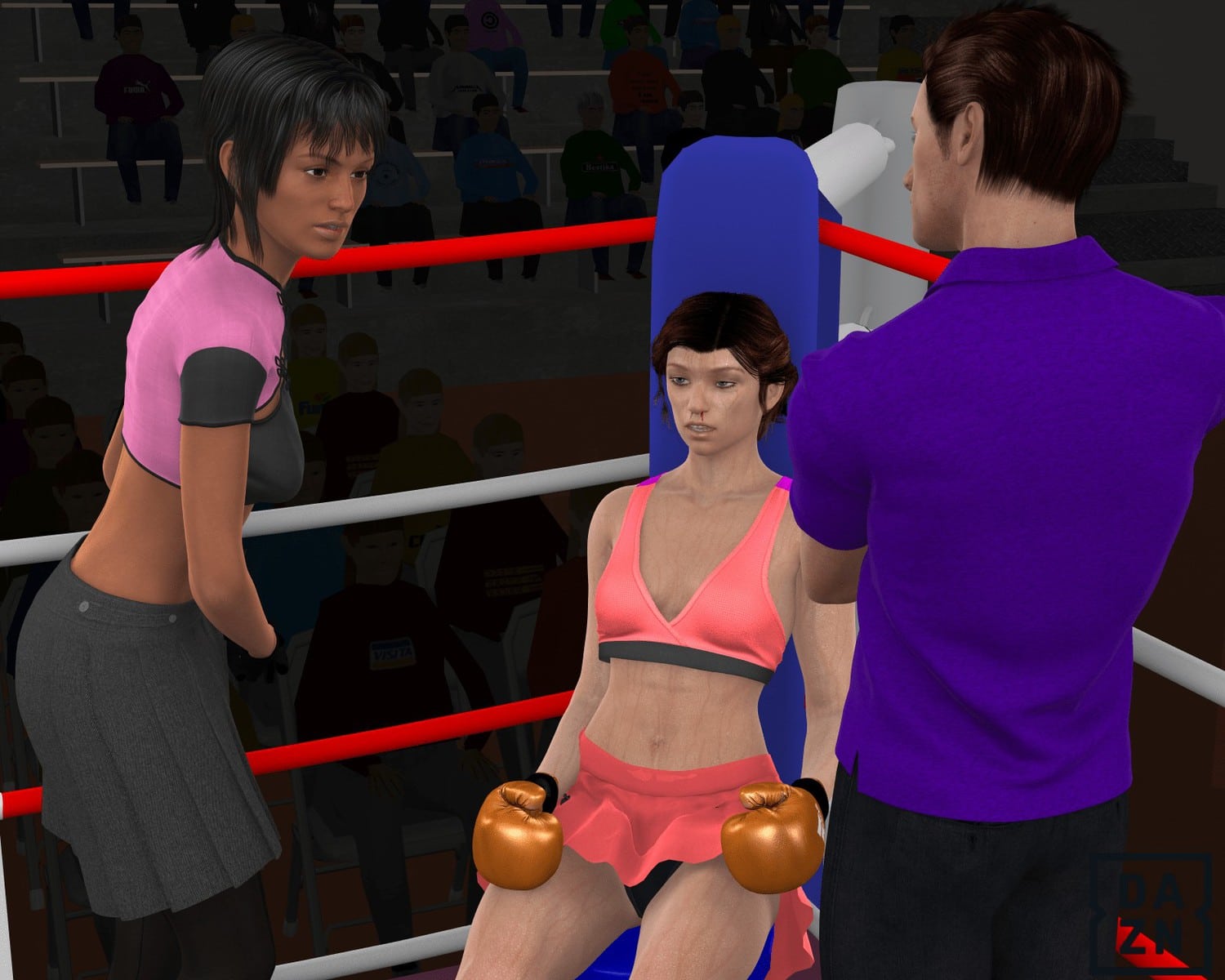 Thomas: “But I am. I’m sure you can do this, Emma. You go toe to toe with Virani in sparring, and now this girl is too much for you? I don’t believe it. You shouldn’t believe it either. Why are you giving up on yourself Emma? You love boxing more than anyone I’ve met. You put more hours in than Virani. Why are you putting all those hours in, if you are going to throw them away when it matters? You’re hurting? I know you are. It hurts to watch you get hurt. But I would have thrown in the towel if I didn’t think you could win. I know you can still win. Why don’t you?”

Emma: Thomas is so animated and my head is swimming so much it’s just…easier to trust him. I close my eyes and push the pain away. It doesn’t all go away, of course…but I feel a little bit better. Good enough to keep going. Because the truth is…I want to box. And there’s no place else I’d rather be right now. I’m down on the cards, but I can change that.

Thomas: Emma’s posture has changed for the better. Maybe she’s not giving in after all.

“Plant a good punch on Astrid in the early going. Make her respect you again, and then back to what worked for you in the early rounds.”

Thomas: “I don’t think I can stop your nose from bleeding. It’s not too bad, but it’ll be annoying.”

Thomas thinks: Whoa, I have got to look into becoming a motivational speaker.

Thomas: “We needs this round Em. Win it for me, please.” 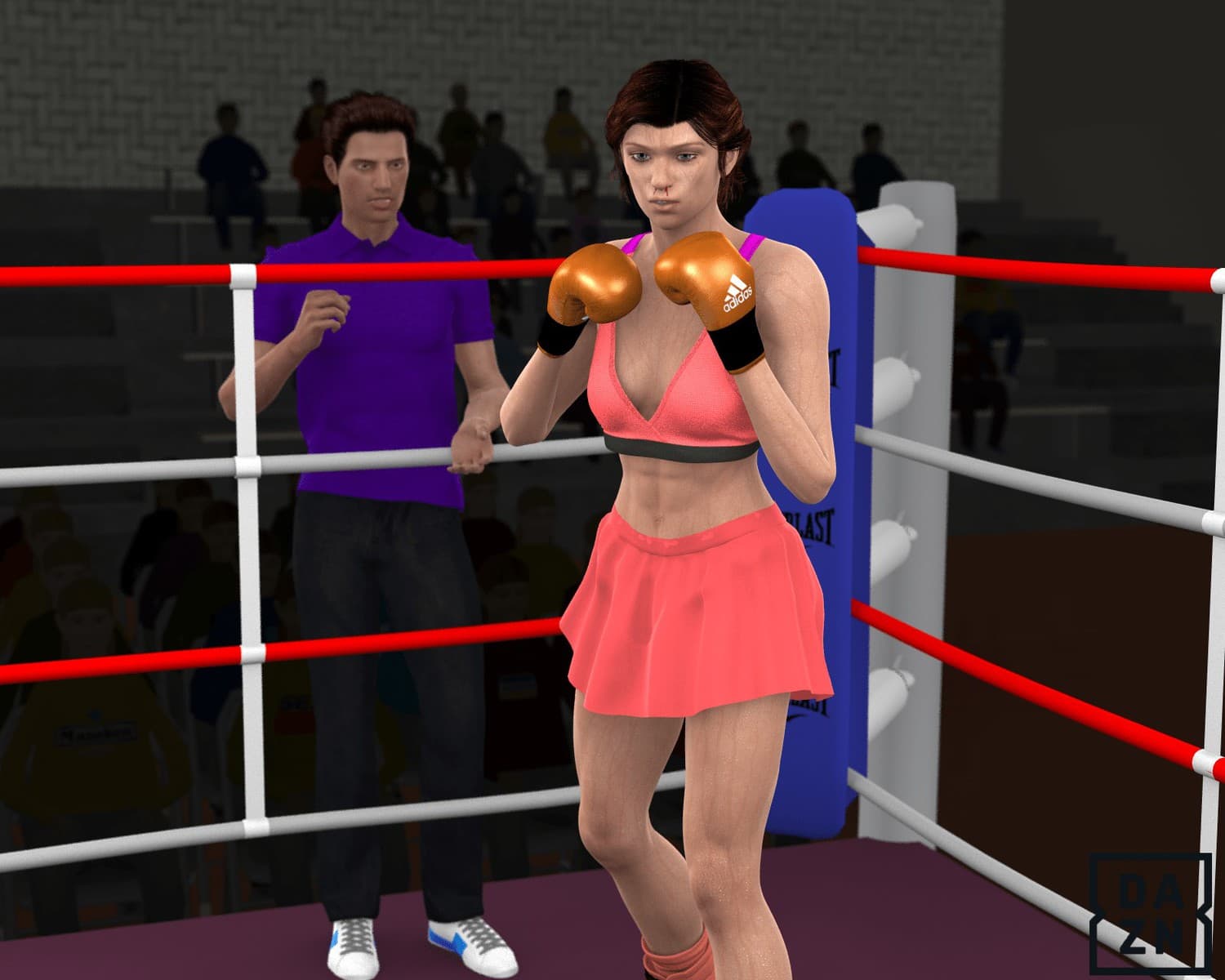 Emma McGale vs. Astrid Olsson – Round 3 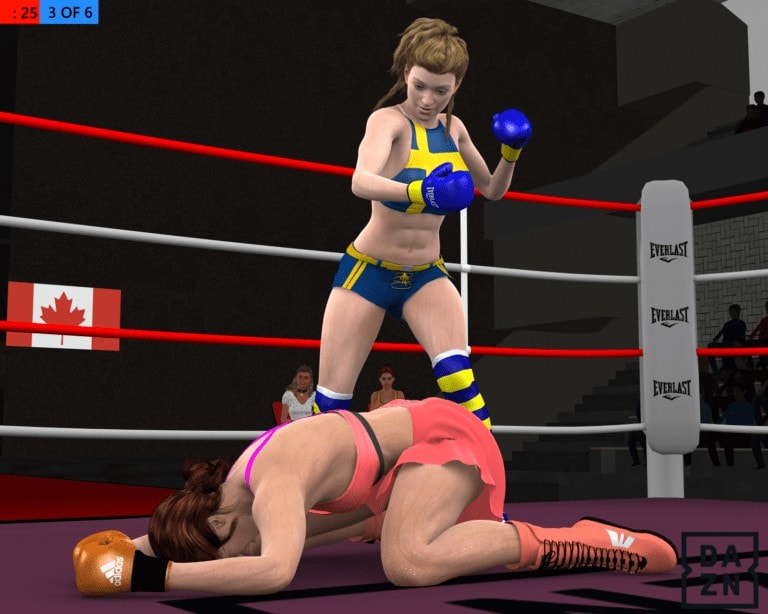 Emma McGale vs. Astrid Olsson – Round 5 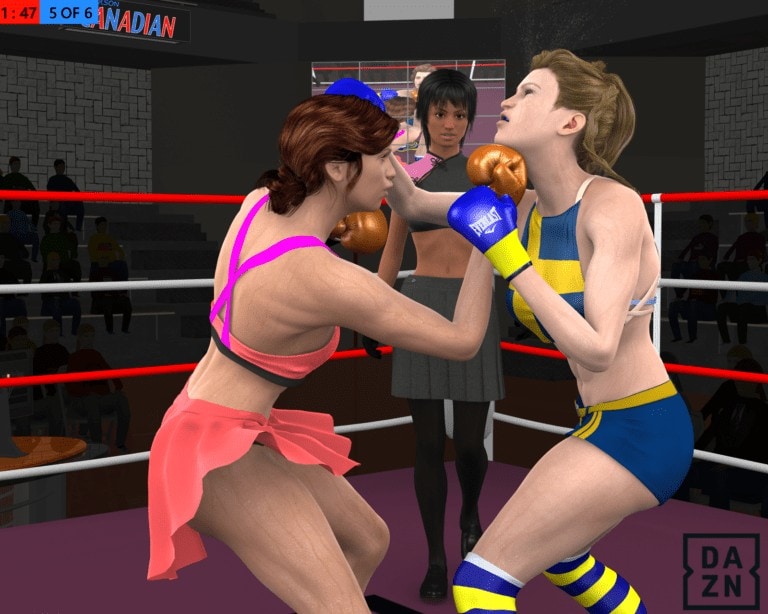