Commentator: “Emma McGale received a rousing speech from her corner, and she seems to have responded…but it is easy to get motivation, its another thing to face punches… But the first punch that Olsson throws is slipped adroitly by The Peach, and she seems to be poised to counter…”

Emma: I’m feeling a little bit better when I come out for this round. I know I need to be better if I have any hope in winning this and keeping my career going. Astrid at the start of the round comes right forward, because of course she does. She takes a big swing at my head and I drop low and to the side to get out of the way. Naturally my right hand dips, and it seems like there’s a chance for my right hand to do some damage with it…

Astrid: Damn, I was hoping to clip Emma right off the start of the round…

Anita: “Knock her damn block off!” 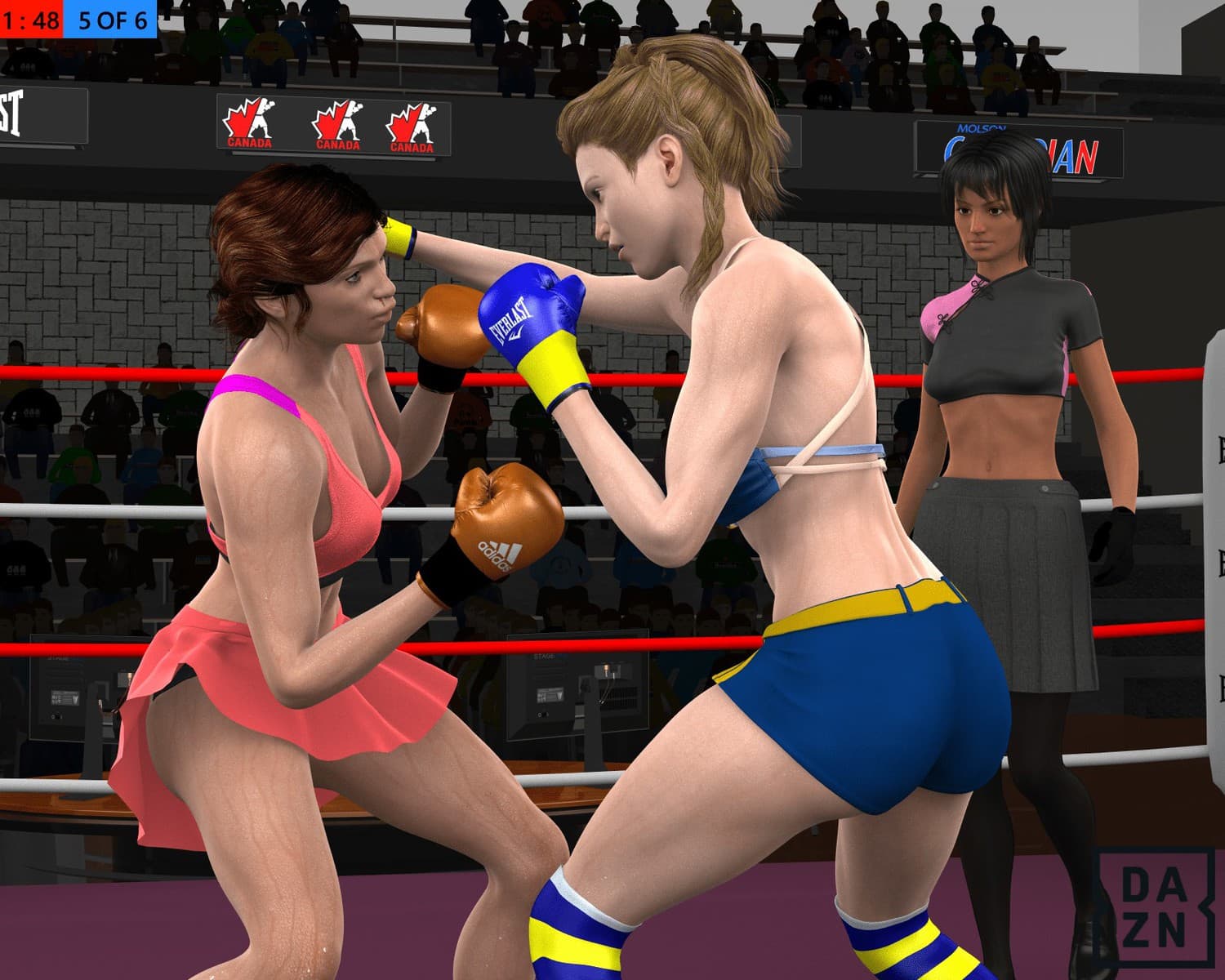 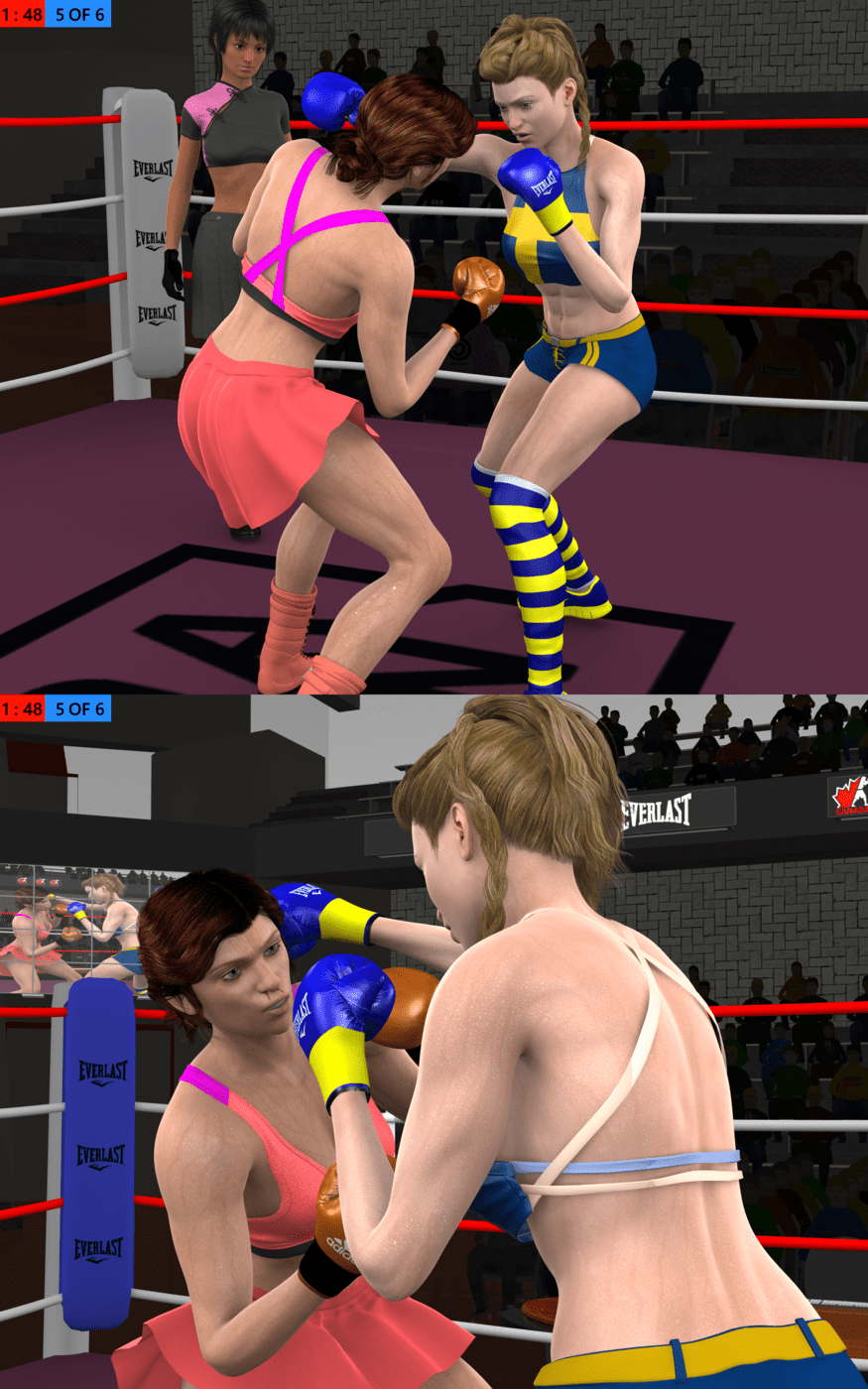 Commentator: “….and McGale connects with a crisp uppercut to the chin of Astrid Olsson! The Swede staggers for a moment, but is able to recover her bearings, though it certainly takes a moment for her to get her balance back. McGale might have followed up, but she seemed to be content with rattling the Swede with a punch right from the off.”

Emma: Its an easy follow through with my right hand coming straight up from below. I clip Astrid right on the chin and she staggers backwards for a moment. It would be easy to follow up, but that feels like the wrong decision. I can take my time. Outbox her. Plenty of time…I’m just getting my legs back as is.

Astrid: I feel an uppercut land. I don’t see it. My legs go for a moment as my eyes drift skyward. Whoa…that punch had something to it. Glad that Emma didn’t follow up. I need a few moments to get my senses fully back.

Anita: “Can’t you just be happy with the punch, that one stunned her.”

Virani: “It should have been more.” 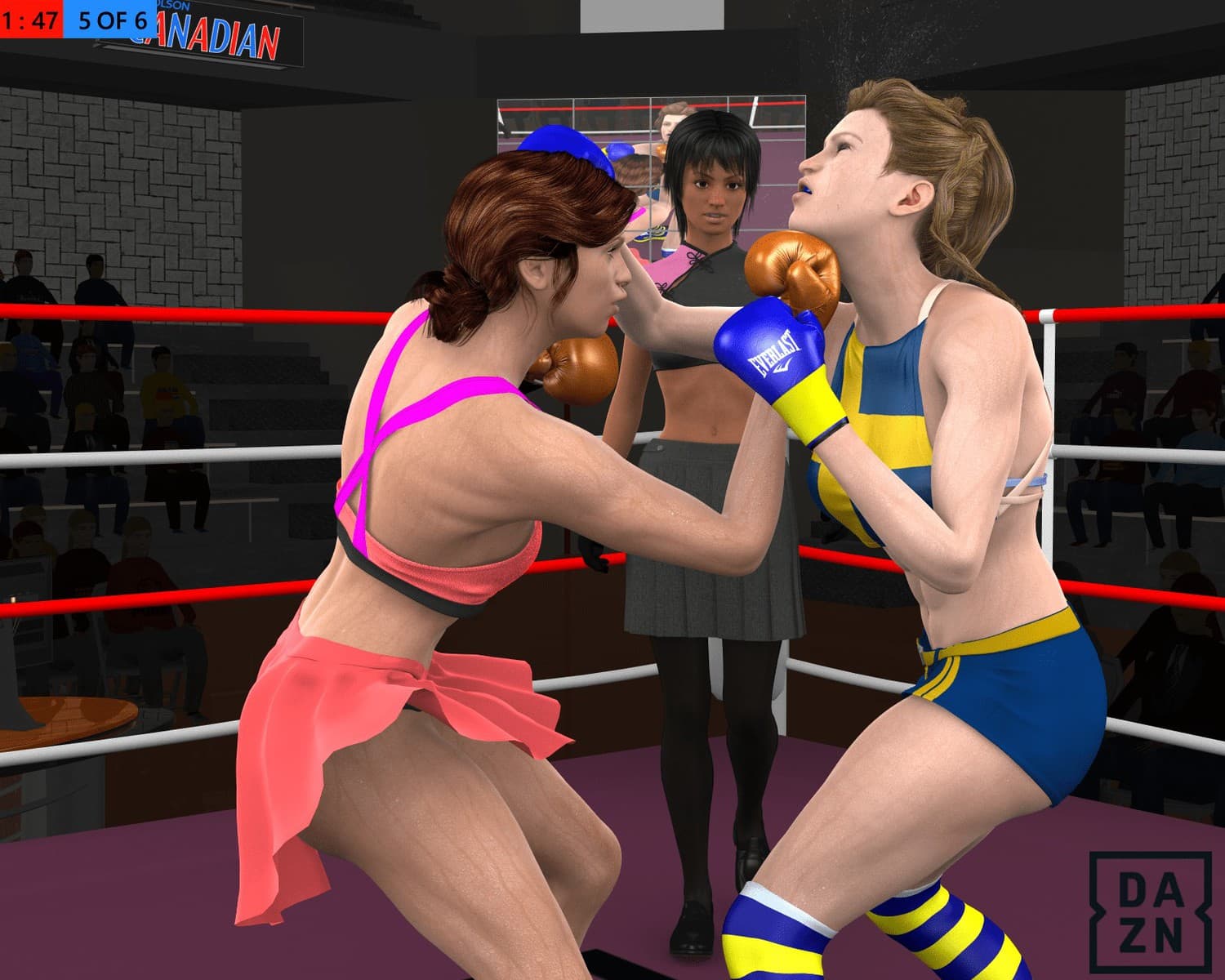 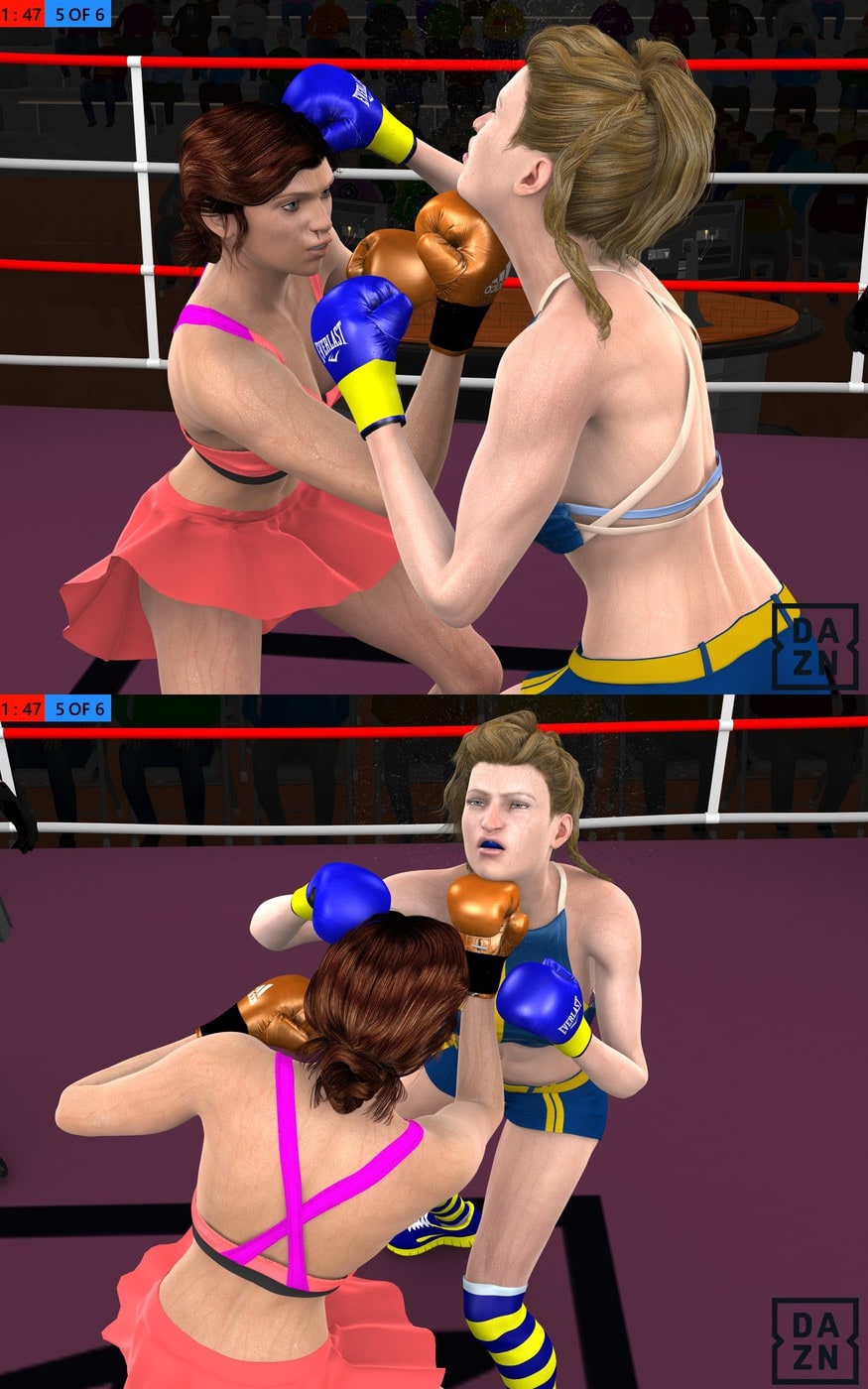 Commentator: “McGale seems more confident in this 5th round, and perfect timing as well, as she is down on the cards and needs to make an impression on the judges. She throws a couple of jabs and then goes low to the body with a nice left hand to the body! Astrid tried to throw a counter right hand but too slow and too late. McGale seems to have recovered brilliantly here in this round. She will be hoping to keep it up…”

Emma: Feels good to take it to the body. There’s something satisfying about hitting someone in the midsection, its just more pleasurable, I think.

Astrid: “Ooof.” Ungh, yeah that hurts way more than it should. Really wish I had caught her with that counter!

Thomas: Emma’s feeling confident when she goes to the body like that. Amazing how quick the turnaround has been for her. I almost don’t want to say anything for fear of stopping this roll she is on. 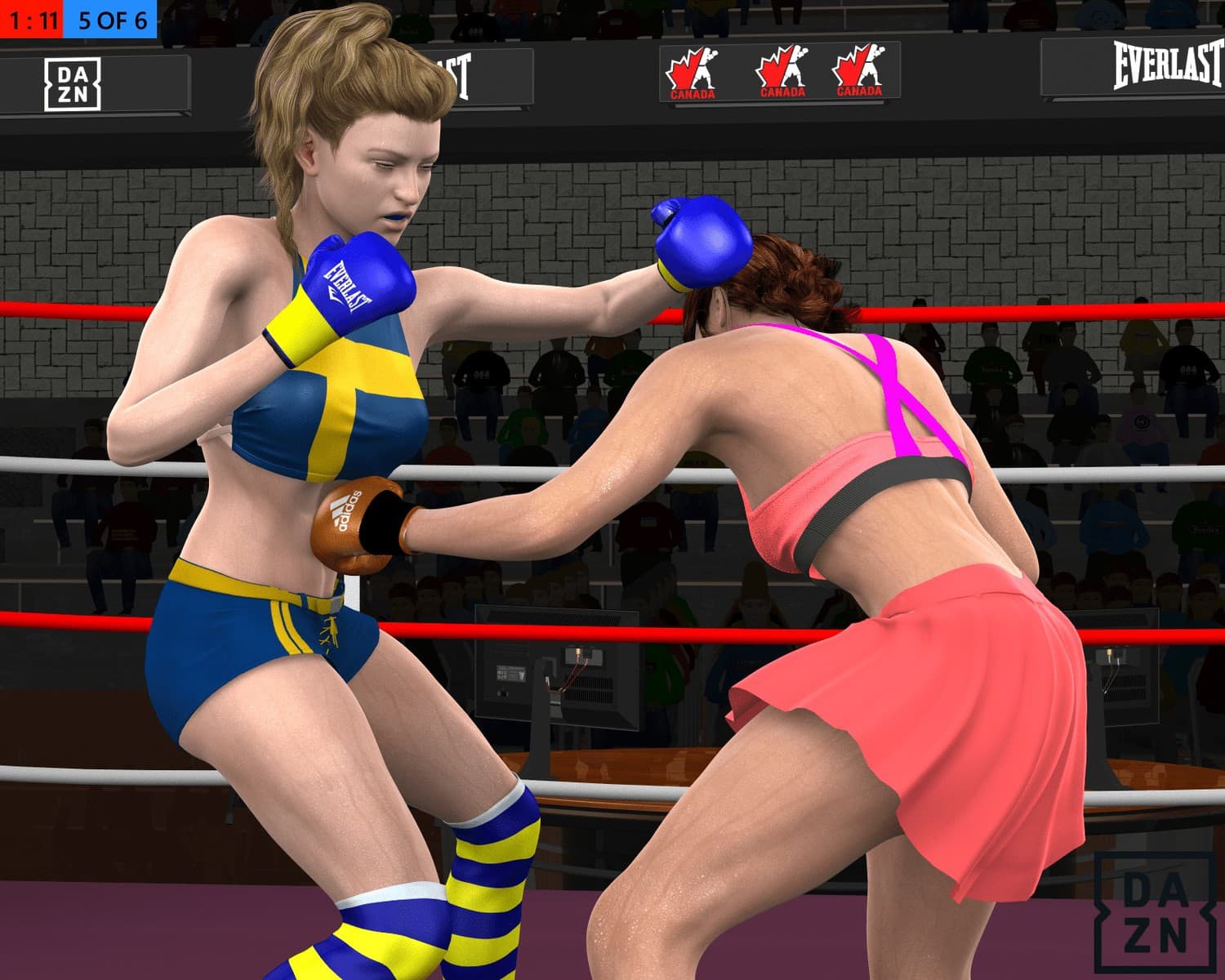 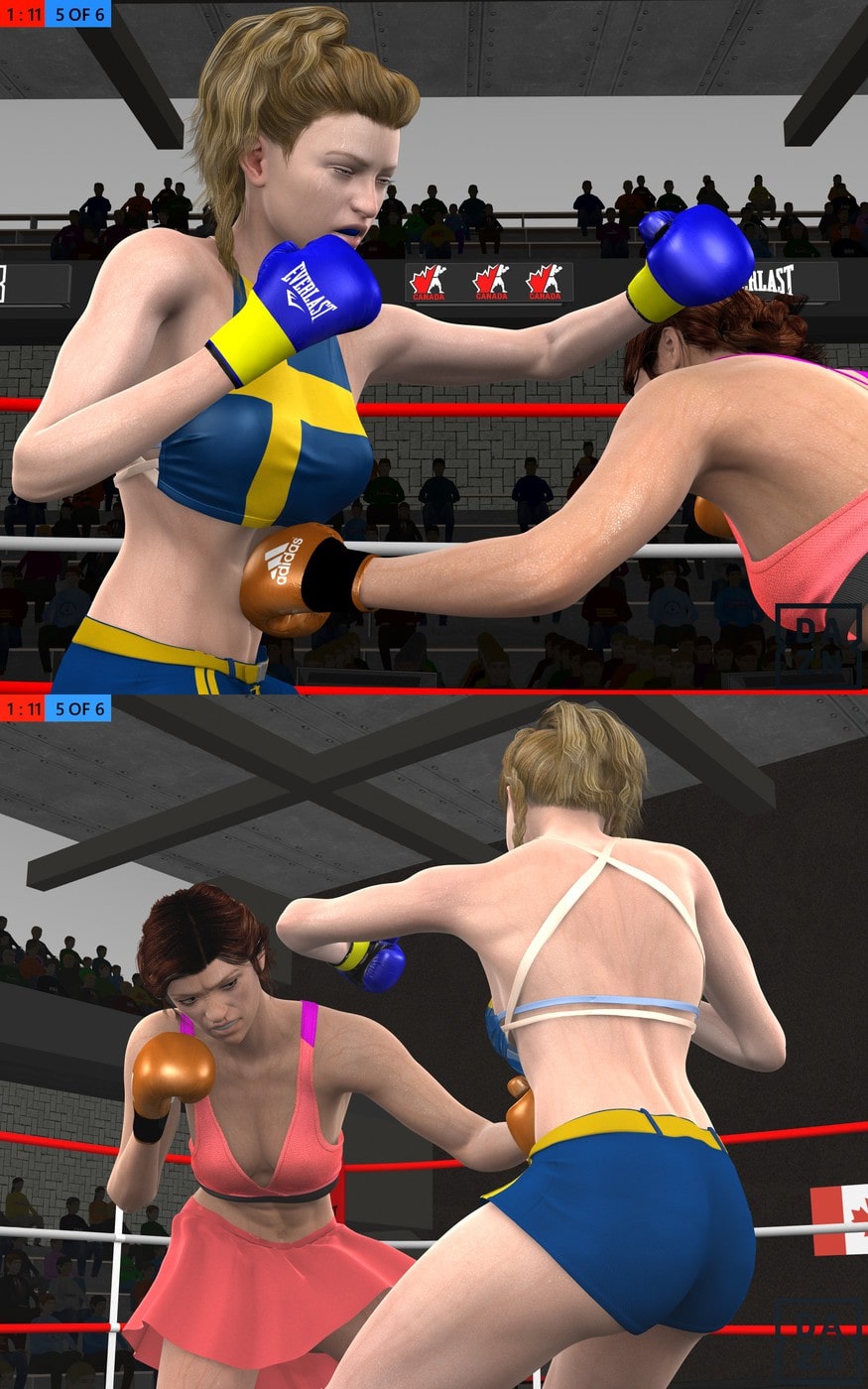 Commentator: “This fight is hotting up as both fighters need to win this round. An exchange begins and The Swedish Sweetheart gets the better of it, as Olsson had the better angle for the punch! That was a painful one that landed around the eye of McGale…”

Astrid: Yeah! Finally got Emma to go for an exchange and I certainly got the better of it as my right hand thuds into the side of her face. Emma doesn’t seem too affected by it, which is a tad surprising. This girl is tough, and she’s got heart. I wish this fight was more rounds, because I am enjoying this!

Emma: For one of the first times in the fight, Astrid and I really start swinging away at each other, and I end up paying the price, eating a really solid punch that gets me on the cheek and around the eye. Damn, that stings. No time to worry about that. This round needs to be mine and that means I have to attack.

Thomas: It’s not the best result, but I do like the aggression from Emma. It’s good to be able to mix it up a bit.

Virani: “Oof. Nice shot from Astrid. Emma’s got to be careful. She’s trying to push, but that’s playing into Astrid’s hands a bit.”

Anita: “Then why is she doing it?”

Virani: “Because the alternative is leaving it up to the judges to decide that your counter attacking was clean enough. Astrid’s aggression is very easy for the judges to appreciate because she initiates the action.” 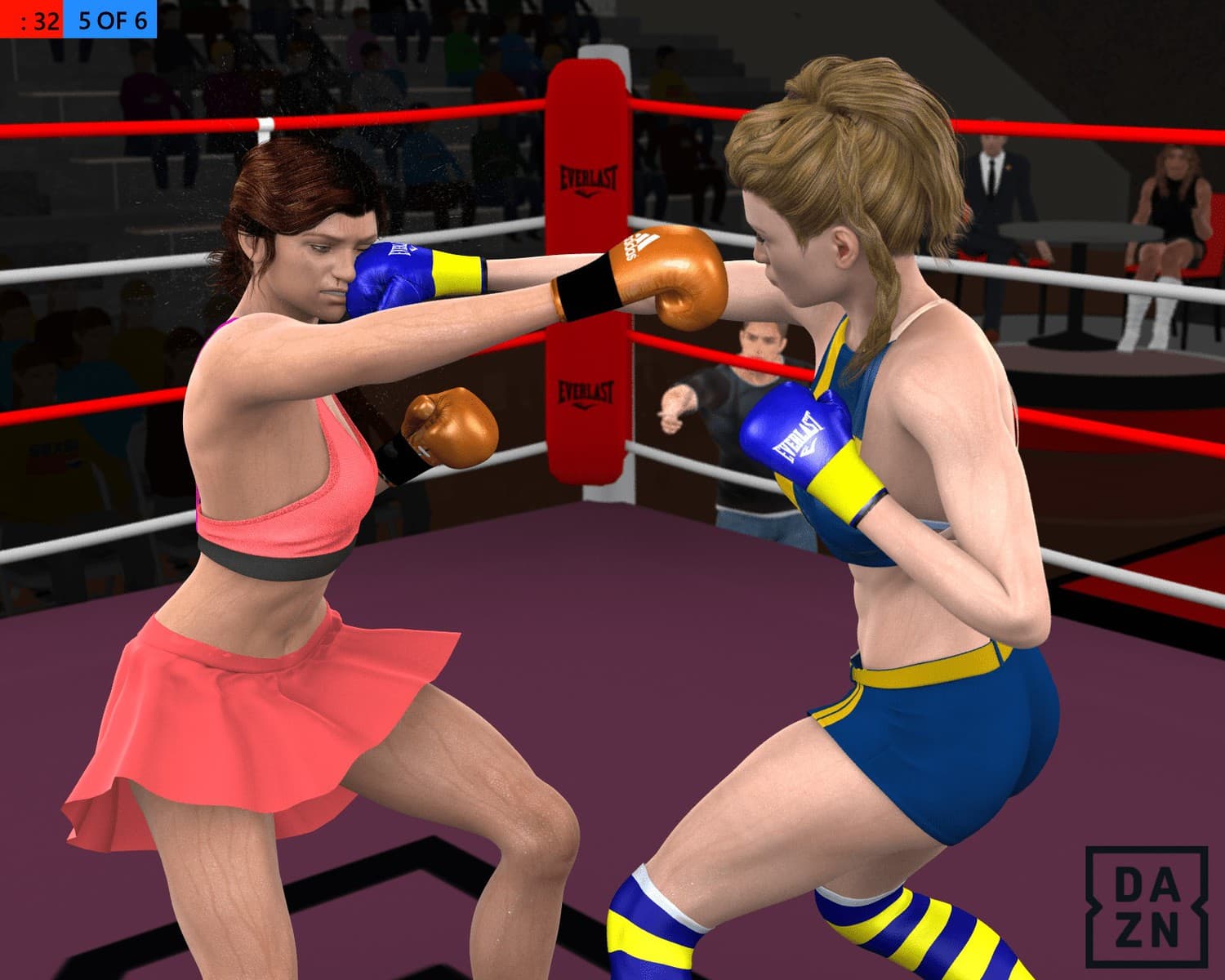 Commentator: “Another wild exchange as the round, both fighters have the same idea as they both land crunching uppercuts as time ticks away here in the 5th and both fighters seem a bit wobbled!”

Emma: I really want to put an exclamation point on this round if I can. A nice big punch to put the idea to the judges that I won this round. Astrid is more than willing to oblige as we both throw punches. Some miss and then I see an opening for an uppercut which I throw without hesitation. It sparks right up under Astrid’s chin, but at the same time, Astrid’s blue glove connects with my chin. That one sends a bit of a shock through my body, but I think my punch did the same to Astrid….

Astrid: If I win this round, I can really make Emma go for broke in the last round…so when there is an opportunity, I don’t hesitate. I get a nice opening for an uppercut and I throw and land it nicely, but I take one in return which makes my legs go weak for a moment…that hurt.

Thomas: I love the heart that Emma is showing right here. She’s been hurt, she’s been down, but she is sure as hell is giving it her all. That’s all I can ask for. I’m not sure my heart can take it though.

Virani: (Shouting) “GET HER EMMA! Punch her lights out!”

Anita: “I should have gotten earplugs.” 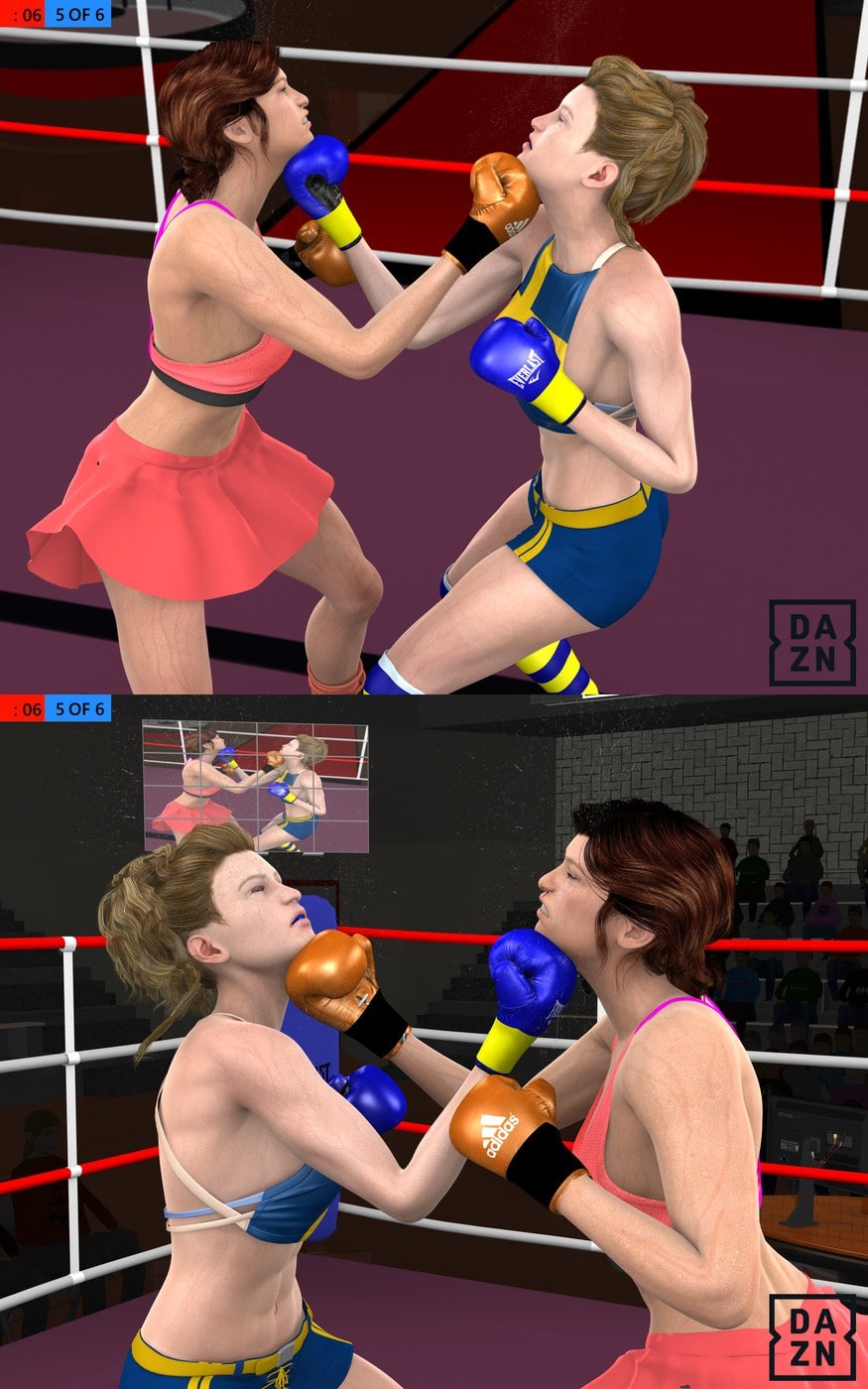 Commentator: “Olsson seems to have been hurt by that exchange of uppercuts and McGale quickly forces her towards the ropes, and then she gets in a perfect straight right that cuts right through Astrid’s guard. That’ll be the last meaningful punch of the round, but that’ll leave an impression with the judges, one would have to think…if not an impression of McGale’s Adidas gloves on her opponent’s nose!”

Emma: I’m a bit hurting from Astrid’s uppercut, but not as hurt as Astrid. She seems to be on shaky legs. I pursue and throw a couple of jabs, which gets Astrid backing up, right into the corner. When she gets there, I drive a straight right hand through Astrid’s guard, which smashes her nose. That’s payback for making my nose bleed. But the round ends before I can do more damage. Damn.

Astrid: I’m dazed for a moment and Emma puts me under pressure, forcing me back until I am against the corner. I try to bring my guard up, but Emma’s punch squeezes right through, flattening my nose and pressing me back into the corner. Thankfully the bell saves me. Whew…that was close… That Emma can punch pretty good!

Virani: “That damn bell! Urgh! Emma almost had her!”

Anita: “How did that uppercut do that much damage to Astrid? She seemed to be able to take heavier punches than that.”

Virani: “Timing is part of it. The other is just sheer accumulation of damage. It tends to add up over time. A punch that would not cause problems in the 1st round can drop someone in the 8th round. There’s a breaking point for everyone.”

Anita: “So are some fighters iron chinned, or is it just a fluke?”

Virani: “I’m honest with myself.” 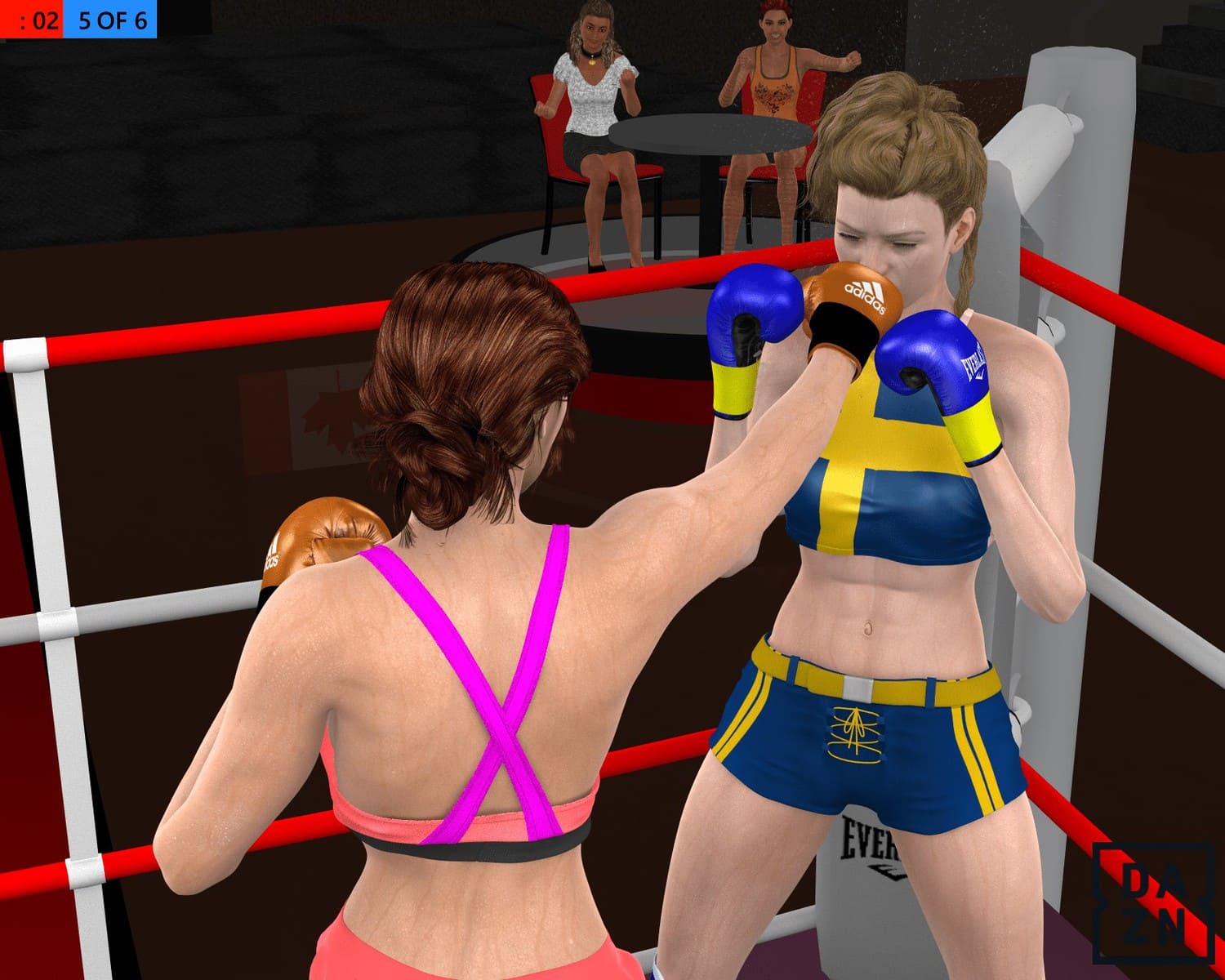 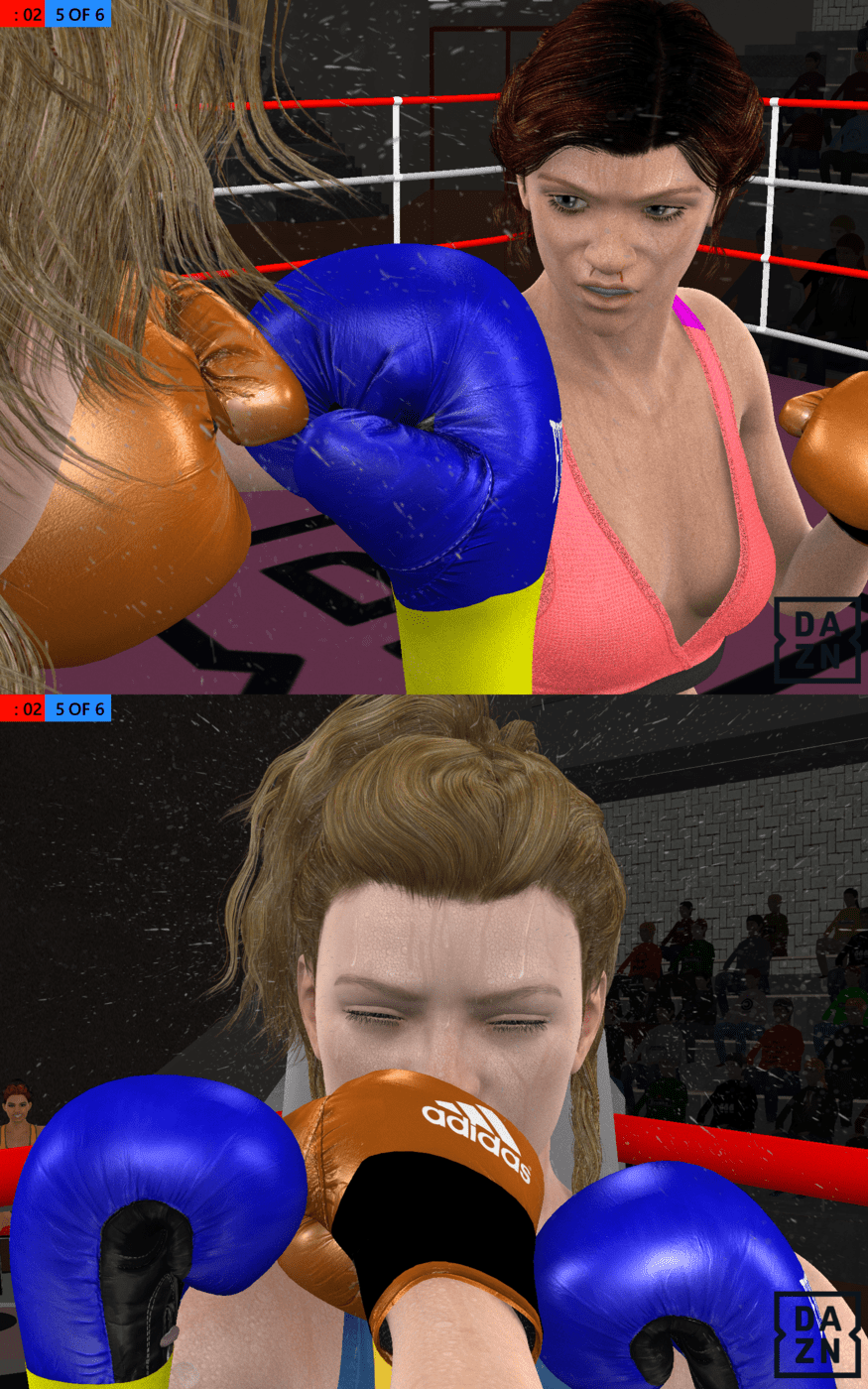 Commentator: “We head to the corners for the final time before a decisive 6th round. I have this fight even going into the final round, so it’s all to play for in the upcoming round. McGale stormed back to stun Olsson late in the 5th round, and we will have to see if there has been any lasting effects from that. Let’s see what the coaches have to say.”

Sven: “Okay Astrid, she made a comeback and took that round. We must give all we have left in this last round!”

Astrid: “Don’t worry about me, I always give me my all!”

Sven: “Be aggressive, judges prefer aggression, so don’t let off the front foot. Are you feeling okay?”

Astrid thinks: Two minutes. I can do two minutes.

Thomas: “That was a bit more trading than I want to see from you, but good job! You won that round.”

Emma: “Thanks…I took a bit of punishment that round.”

Thomas: “That’s a problem for tomorrow. Right now, I need you to focus on the next two minutes. The next round is going to be key, it should determine the fight. How do you feel about setting a trap?”

Thomas: “Astrid leaves herself open when she punches, we’ve been taking advantage of it for the full fight. I want you to let her force you towards the counter, but instead of using your feet to escape, plant them and go for one big counter. That should set the tone for the rest of the round. Don’t leave it up to the judges. You know what happened to Virani. Make sure you leave it all in the ring, Emma.”

Virani: “YOU CAN DO IT EMMA! I BELIEVE IN YOU!” 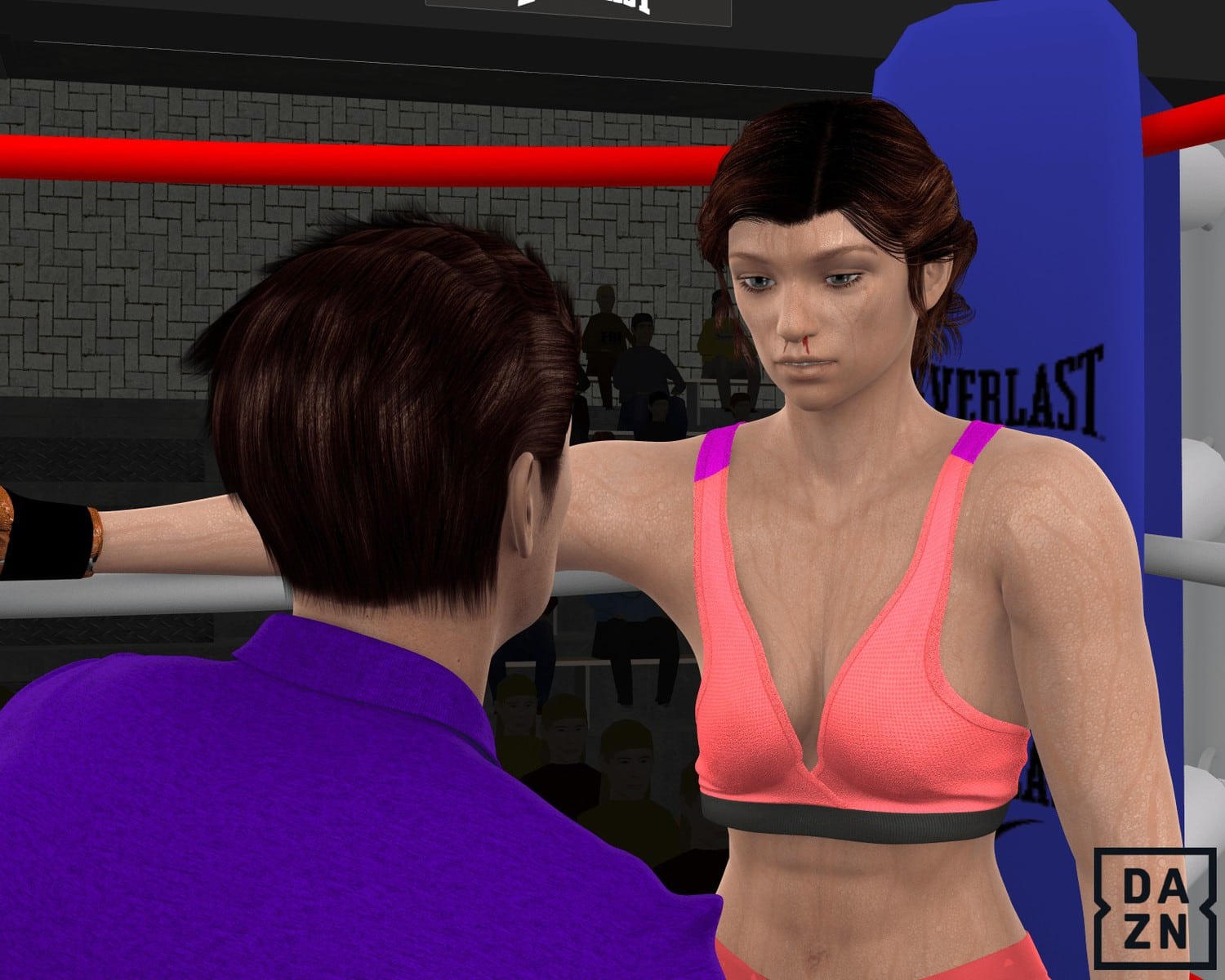 Emma McGale vs. Astrid Olsson – Round 4 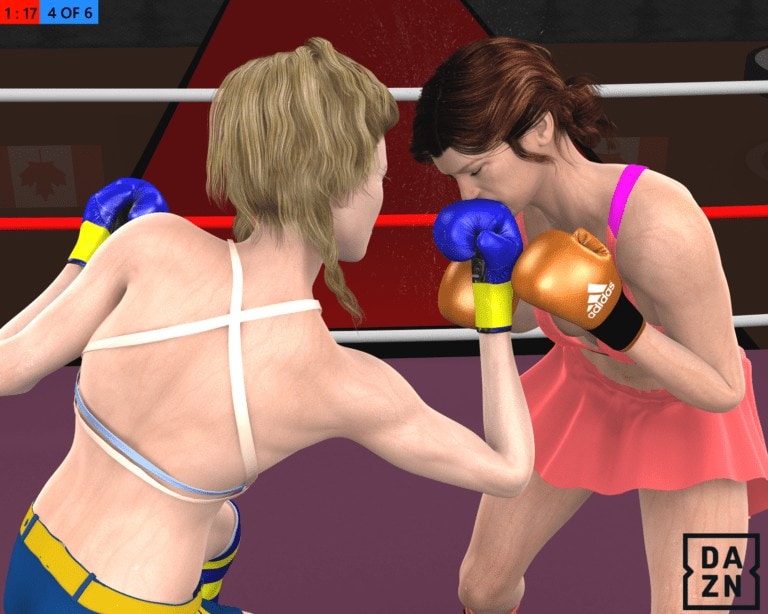 Emma McGale vs. Astrid Olsson – Round 6 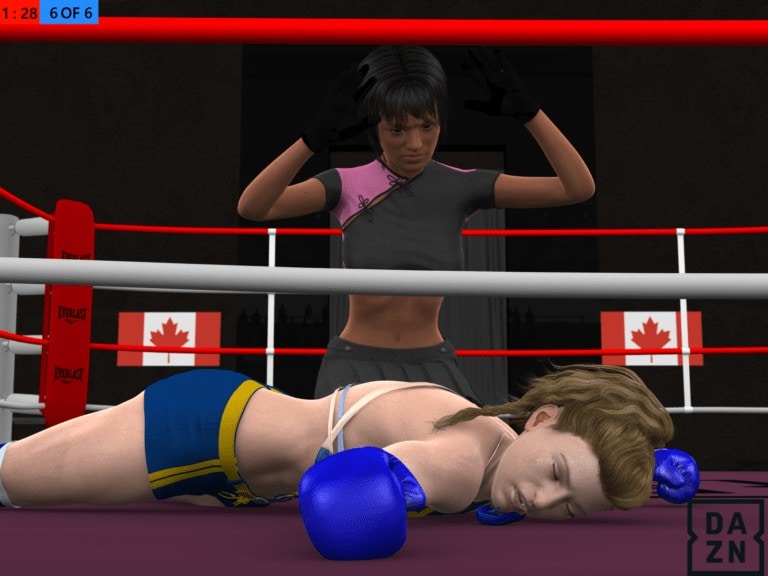