Ding! The third round starts. Mercedes takes the center of the ring quickly. Her San Diego opponent doesn’t want to trade. She prefers to step sideways and look for counters.

After a few seconds, it becomes clear enough for everyone at ringside. Caitlin is drained. It feels even worse now that fatigue has settled in.

Jim: “Sometimes, it takes a while for fatigue to settle in. Sitting on a stool for a minute may have been the worst thing for Caitlin Brown.”

Warren: “She has slowed down considerably. There is less spring in her legs and her facial expression betrays that she’s not sure what to do. That is the last thing you want to show to your opponent in boxing.”

The young black woman bounces forward to go after Caitlin, who takes a few steps back. The rushing attacker is very quick on her feet.

Both boxers want to hit at the same time. Caitlin wants to jab to hold Mercedes back. Her opponent goes for the right hook. The red glove flies much faster than the blue one, and it shatters Caitlin’s jaw. PISH!

Jim: “What a strike! Carter hurts Brown with a massive overhand right hook thrown at the right time. I repeat: what a strike!”

Warren: “Amateur boxing insiders who have seen Mercedes Carter know this punch. It’s her favourite. Her most dangerous weapon and she hurt scores of fighters with it. She threw it spectacularly this time. She can now think about a knockout.”

Jim: “Caitlin Brown is hurt! She steps back to buy time but Mercedes Carter is not selling. She turns on the engine, drives forward and slips a strong left uppercut between Brown’s gloves.”

Warren: “That’s Carter’s instinct at work, Jim. She is merciless when she has a hurt fighter in front of her and Brown is just one among many.”

Caitlin feels the red glove thumping the tip of her chin and her head snapping back. She grunts while the crowd cheers in anticipation of further heavy punches.

Decidedly hurt, Caitlin falls back to the ropes and her hands drop. The combination of fatigue and two big punches is getting the best of her.

However, Mercedes doesn’t relent. She wants to finish the fight now. She reloads by regaining her balance and coming forward. Then, she releases her right hand for a straight punch. Without any defense, Caitlin can only “block it with her head”. The red glove smacks her on the cheek, forcing a spray of sweat to the side.

The officials steps in.

Jim: “Carter is becoming even more aggressive, dishing out the punishment at an alarming rate. Now is great moment to give Brown a standing count or simply stop the fight.”

Warren: “Since this is an amateur fight, I would put an end to this, Jim. Protecting the fighter is the amateur ref’s first obligation in the ring. Carter has Brown more hurt than she was in the second round.”

The ref points to a neutral corner and immediately turns to Caitlin as the red opponent starts walking away. She looks at Caitlin to assess her state for either a count or a stoppage. She sees a vacant expression and pain.

Referee thinks: “She’s punch-drunk. I’m stopping it. No way she can get back into this one.”

A tired Caitlin bends forward and spreads her arms in disbelief. 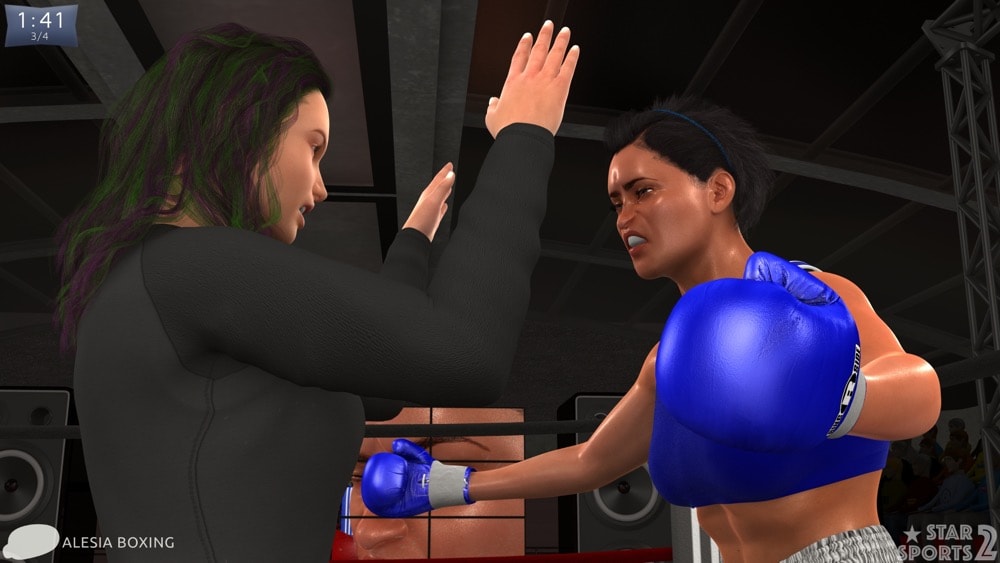 Jim: “Brown protests against the referee’s decision, but I don’t blame the official for stopping the fight. She took hard shots from a fired-up Mercedes Carter and fell in the ropes, without any ability to resist whatsoever.”

Warren: “Agreed. Brown is toast. The ref only prevented her from taking further damage. We have a worthy new Welterweight champion at the Golden Gloves.”

With this stoppage, Mercedes Carter is the Golden Gloves champion for 2018 in the Welterweight division!

Our fighter immediately turns to the red corner, where her coach Carl Williams is waiting for a celebratory hug. She runs and jumps in quickly.

Mercedes: “Thanks pops! Ya helped me so much! Dat title is yours, too!”

Jim: “Mercedes Carter has managed the pressure of a tough and talented opponent to stop her, surviving a painful second round and using her unique blend of skills. A job well done in my opinion.”

Warren: “Although I hate to agree with you, Jim, now I have to. Carter is a top fighter who has a great chance to make a killing at the Olympics in 2020 or turn pro in 2019. The decision lies in her hands.”

Ring announcer: “Ladies and gentlemen… at 1:41 in Round 3, we have a Referee Stop Contest. Please, a round of applause for the winner and 2018 USA Golden Gloves champion in the Welterweight category… from Detroit…. Mercedes “Red Terror” Caaaarrrrrteerrrrrrrrr!”

The crowd raises the roof as Mercedes jumps in the air after having her arm raised. USA Boxing officials give her the big, heavy golden trophy that proves her victory.

Mercedes then gives the trophy to her coach, bows to the four sides of the ring and raises both arms to salute the audience before getting out of the ring. 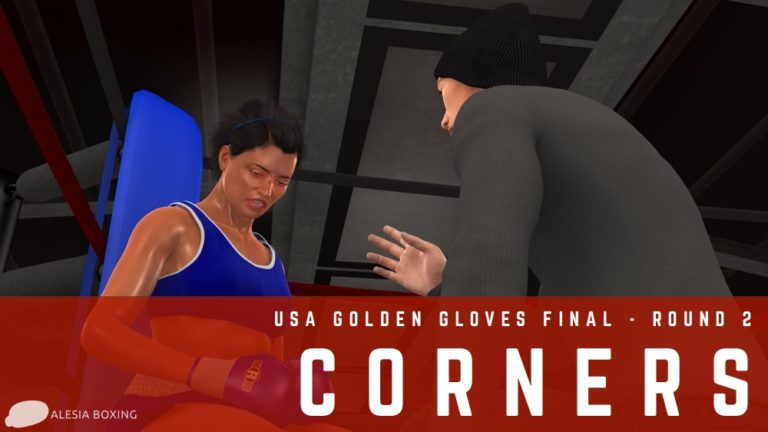