Laila: “Next up we have our co-main event of the evening, where we have a Featherweight showdown between Carla ‘La Princesa’ Flores, the Mexican Featherweight champion, and the always dangerous Jessimin ‘Silver Fox’ Reed.”

Virani: “Carla comes in with a very capable record of 8-1 with 6 KOs. Her lone loss did come by knockout, but it was avenged when Carla knocked out Maria Garcia to win the Mexican Featherweight championship in her last fight. She is a tough, tough fighter that fights in the traditional ‘Mexican’ style. She likes to get inside and land shots in close.”

Laila: “The American, Jessimin ‘Silver Fox’ Reed is experienced and capable fighter, coming in with a record of 18 wins and 6 losses. She has 9 knockouts to her name. She’s solid fighter, known for her tenacity, but she’s also known for fading late in fights.”

Virani: “The bookmakers think of Carla Flores as the betting favourite, but not by an overly huge amount. This one is scheduled for 10 and it would not be a surprise to see it go the distance.”

Laila: “Let’s go down to ringside, where the two fighters are getting the preliminaries from the referee…and once that is done, they touch gloves, with Jessimin going for bit of a veteran mind game by putting her gloves on top of Carla’s. The Mexican…seems to be taking that one in stride.”

Virani: “I love both of these girl’s outfits. When you fight, you might as well look good!” 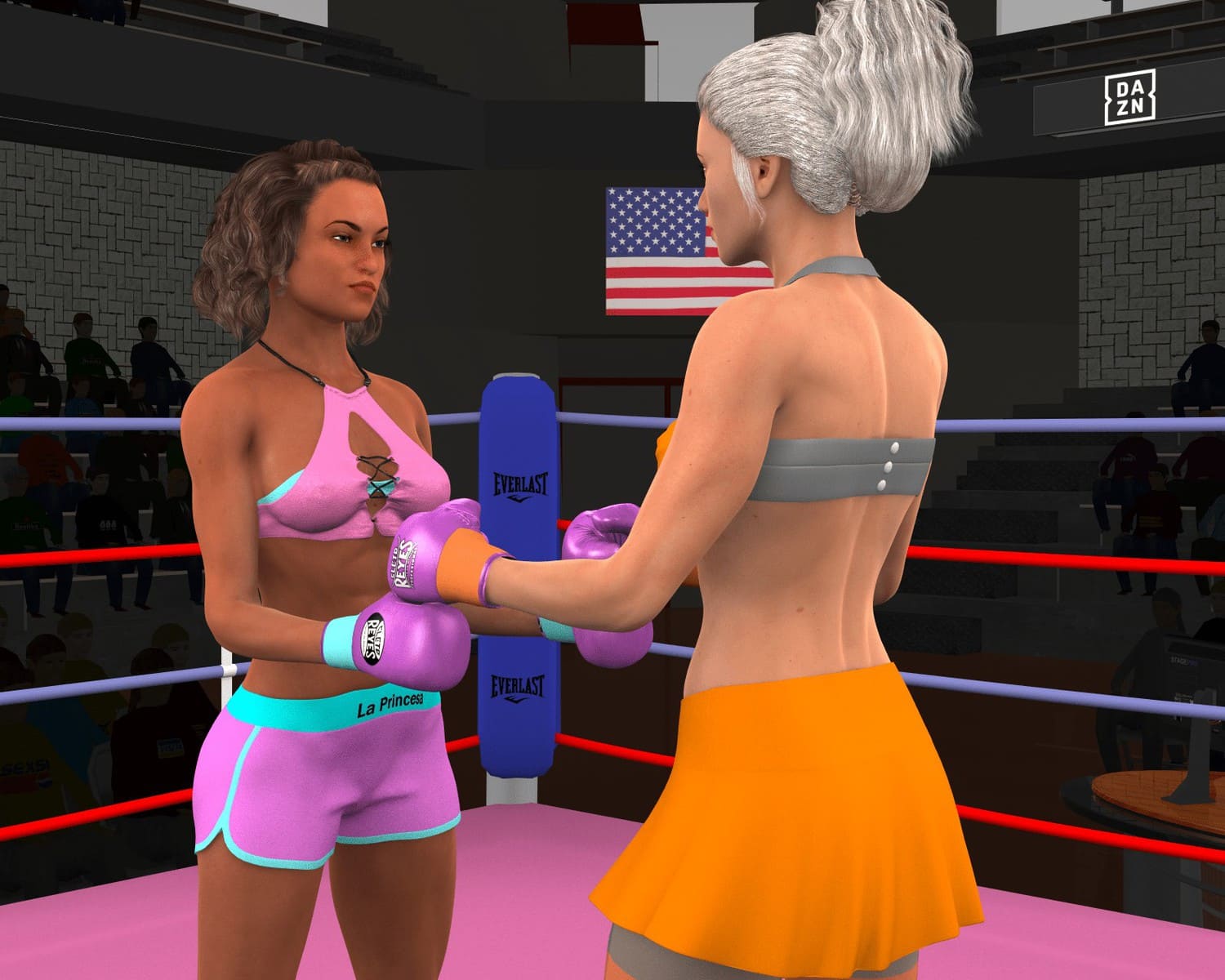 Laila: “The first two rounds of this one have been dominated by the aggressive Mexican. It’s been a well contested fight between the pair, but when counting the significant punches, more has come from Carla Flores. She’s done well to work the body too, which has been impressive.”

Virani: “I agree Laila. Jessimin has had her moments, but Carla is fighting her fight, getting inside and working the body. That’s been a common strategy for Carla in many of her fights, and it doesn’t seem like Jessimin necessarily has an answer for her. Which is concerning, to say the least”

Laila: “How do you got about countering Carla’s aggressive style?”

Virani: “Well, if you don’t want to fight Carla inside, you have to find a way to keep her at a distance, whether that be with a jab, or by landing power punches of your own. A slugfest doesn’t really favour Jessimin, so I would expect her to try to land the jab with more regularity than she has so far. If she can’t keep Carla away…it’ll be a long night for her.” 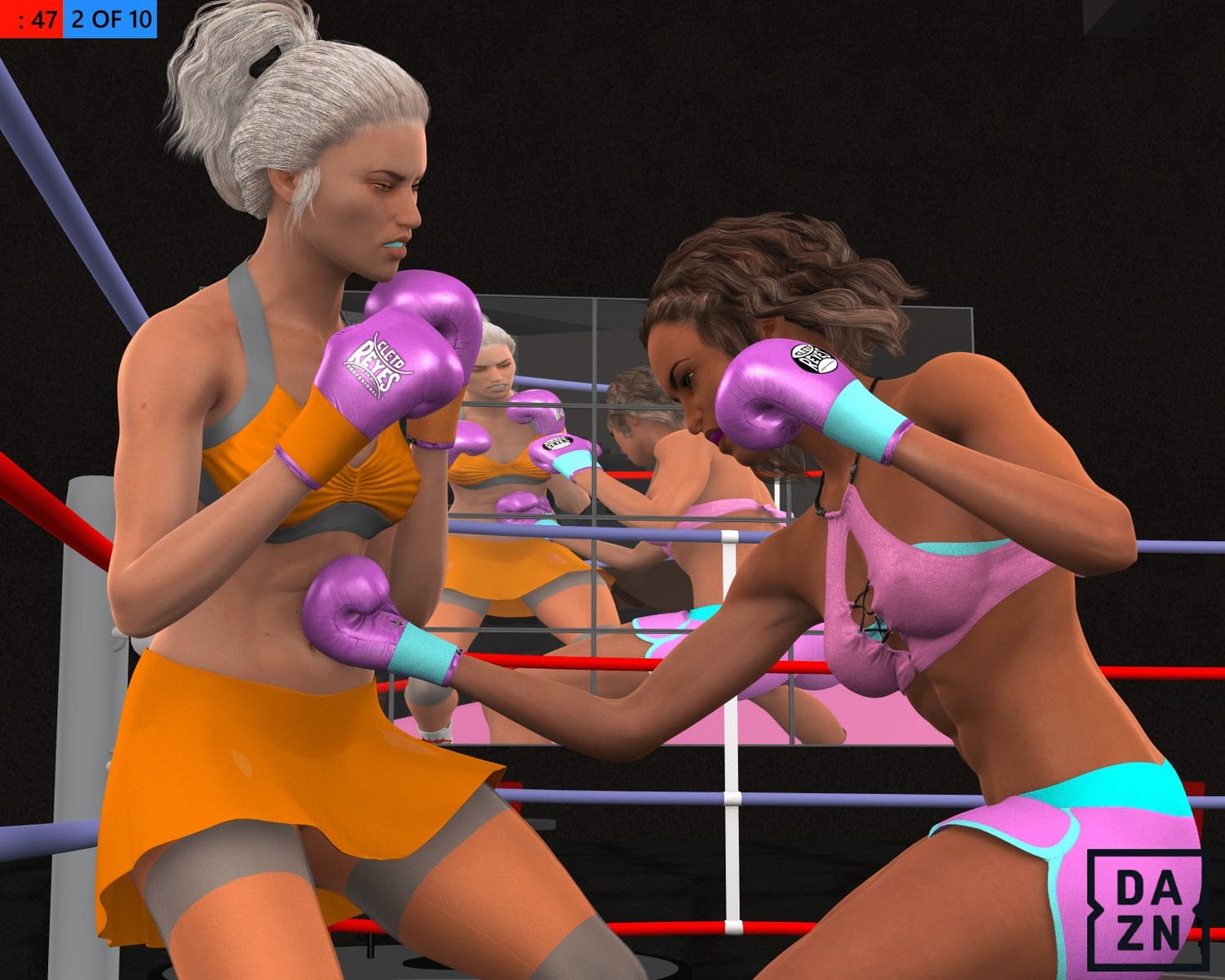 Laila: “Though Carla looks somewhat slight, she is really able to bully Jessimin around inside, adroitly using her shoulder to create openings.”

Virani: “Jessimin can’t afford to hope the ref bails her out of situation like these, she’s either got to get on her bike and get out of there, or try to fight her way out…” 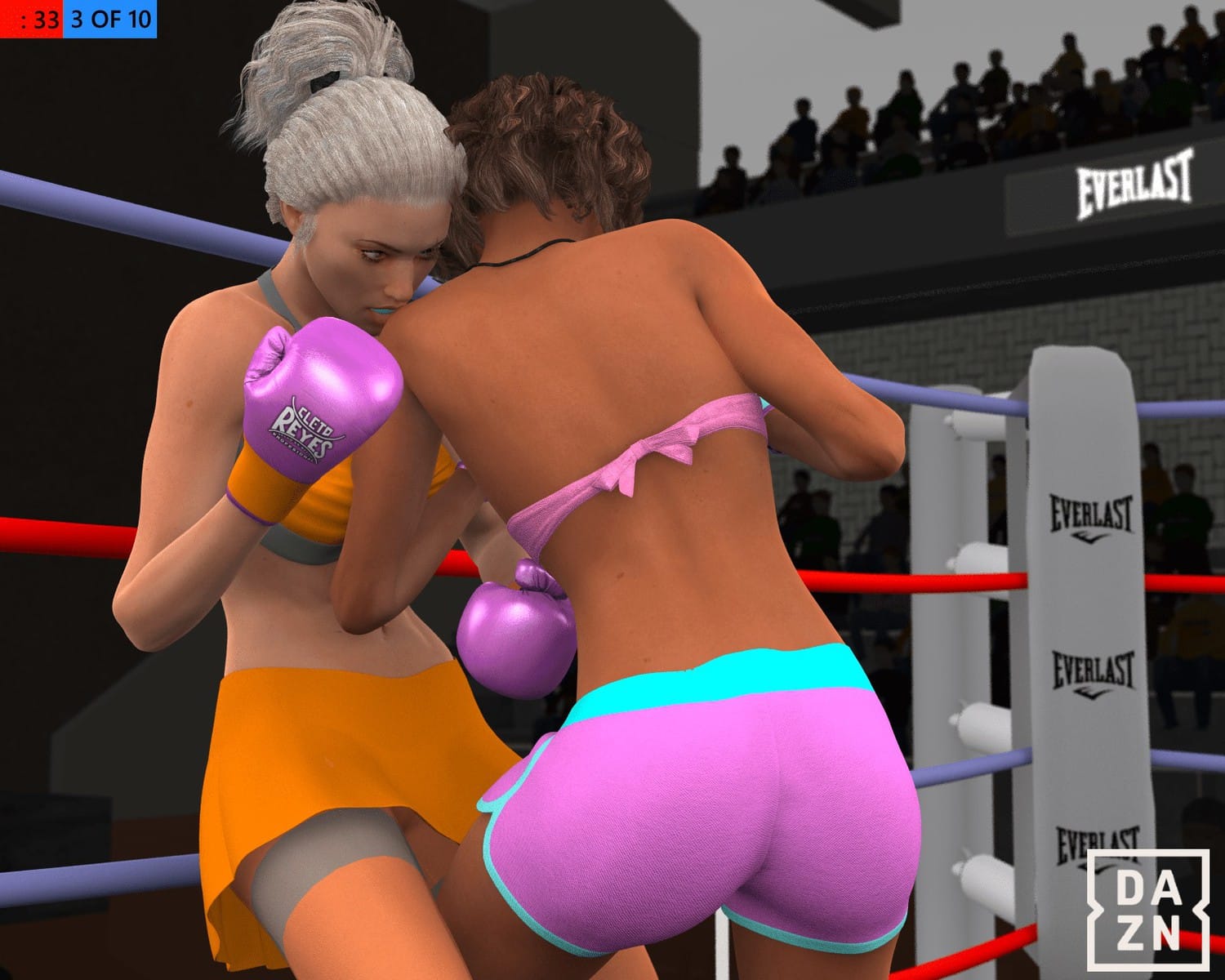 Laila: “Oh! After carving the space with her shoulder, Carla drives a wicked right hand onto Jessimin’s jaw! That was the biggest punch of the fight so far. Jessimin clinches to force a break, but she is looking hurt from that one.”

Laila: “Sneaky stuff from the Mexican fighter, who shows some real veteran wiles in this fight.” 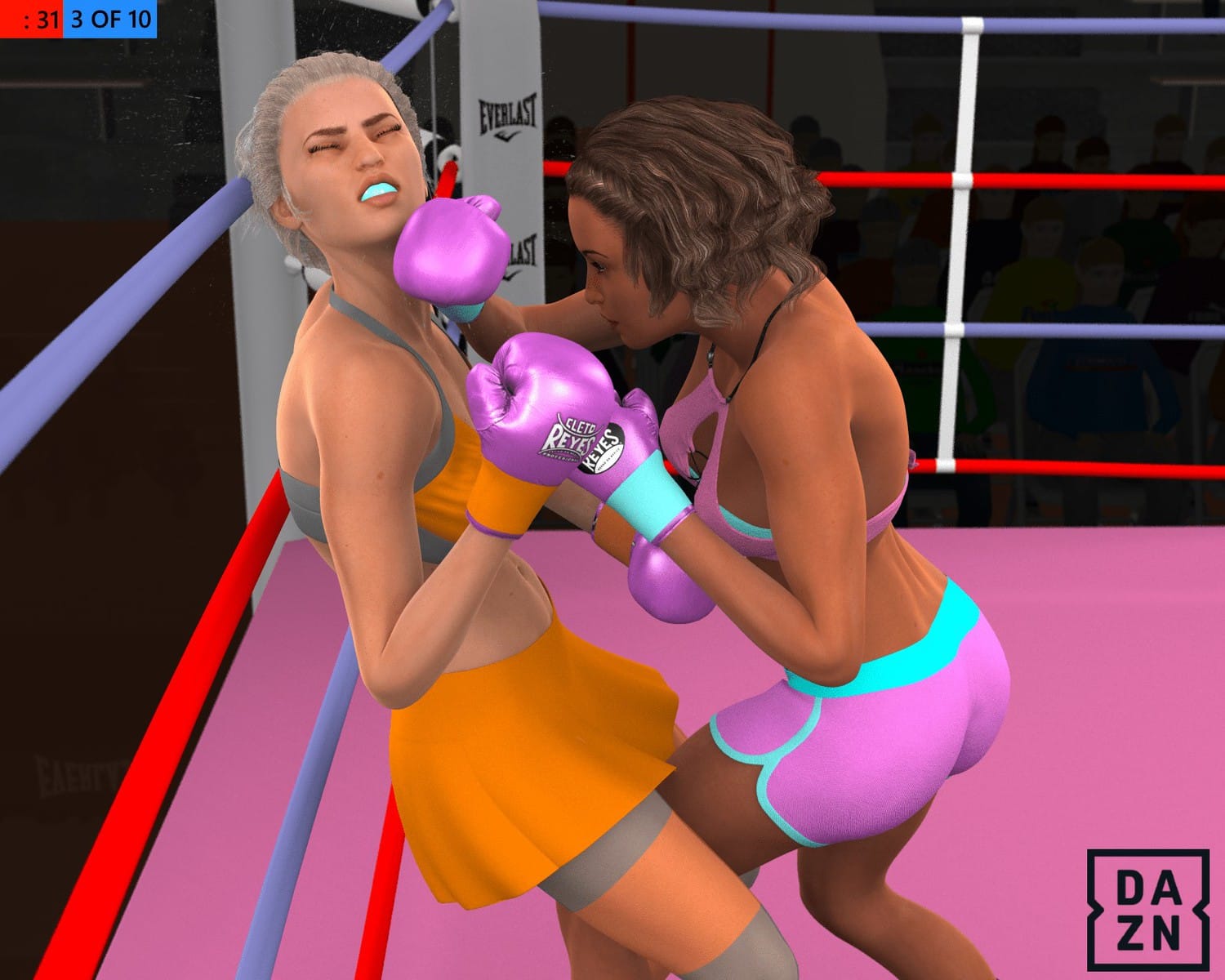 Laila: “Though Carla has won the first 3 rounds, there is signs of life in the American here in round 4, as she has really worked hard to box at range and keep Carla on the end of a snapping jab. What’s been the difference in this last round?”

Virani: Jessmin is using her feet better. She has been gliding around the ring this round and it’s made it very difficult for Carla to get in the right range to throw punches. It’s the way I think you need to fight against Carla.”

Laila: “And what does Carla need to do better?”

Virani: “Move her head, make her movement a bit more predictable. Right now Carla is there to be hit, and now Jessimin is hitting her.”

Laila: “That seems like something that she may want to rectify…” 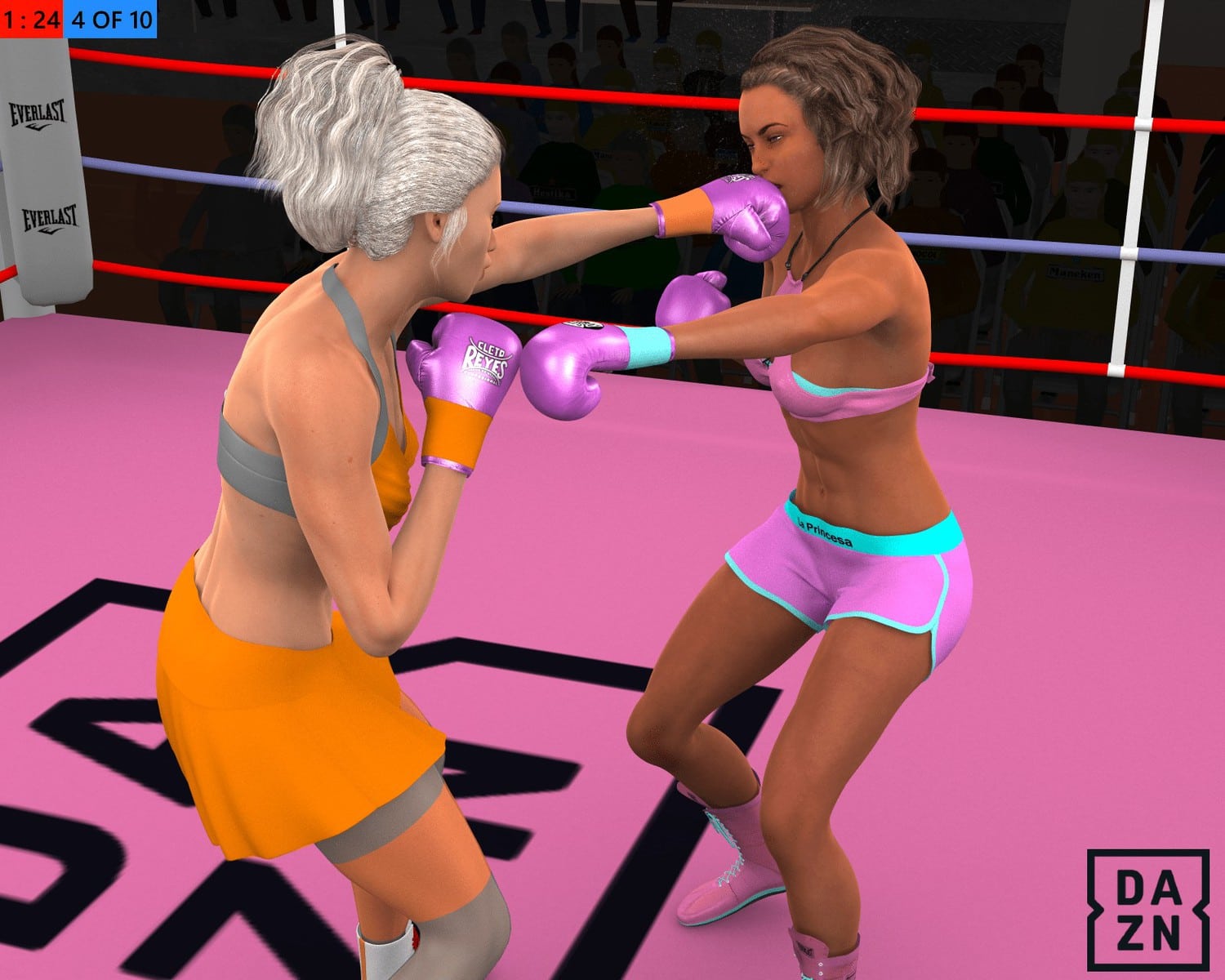 Laila: “Jessimin is coming off her best stretch of the fight in the 4rd and 5th, but here in the 6th, it seems like momentum has shifted back towards the Mexican champion. Jessimin seems to be fading here as we enter the later rounds whether that be to the pounding that Carla has put on her, especially to the body, or a natural fading late into a fight.”

Virani: “Whatever it is, that’s a terrible sign for Jessimin.”

Laila: “Now Carla unloads a big uppercut into Jessimin’s midsection, and the American’s mouthpiece just about jars free of her mouth, that’s the sign of a fighter that is not taking these punches well.”

Virani: “Jessimin’s durable, but Carla has really worn her down this round.” 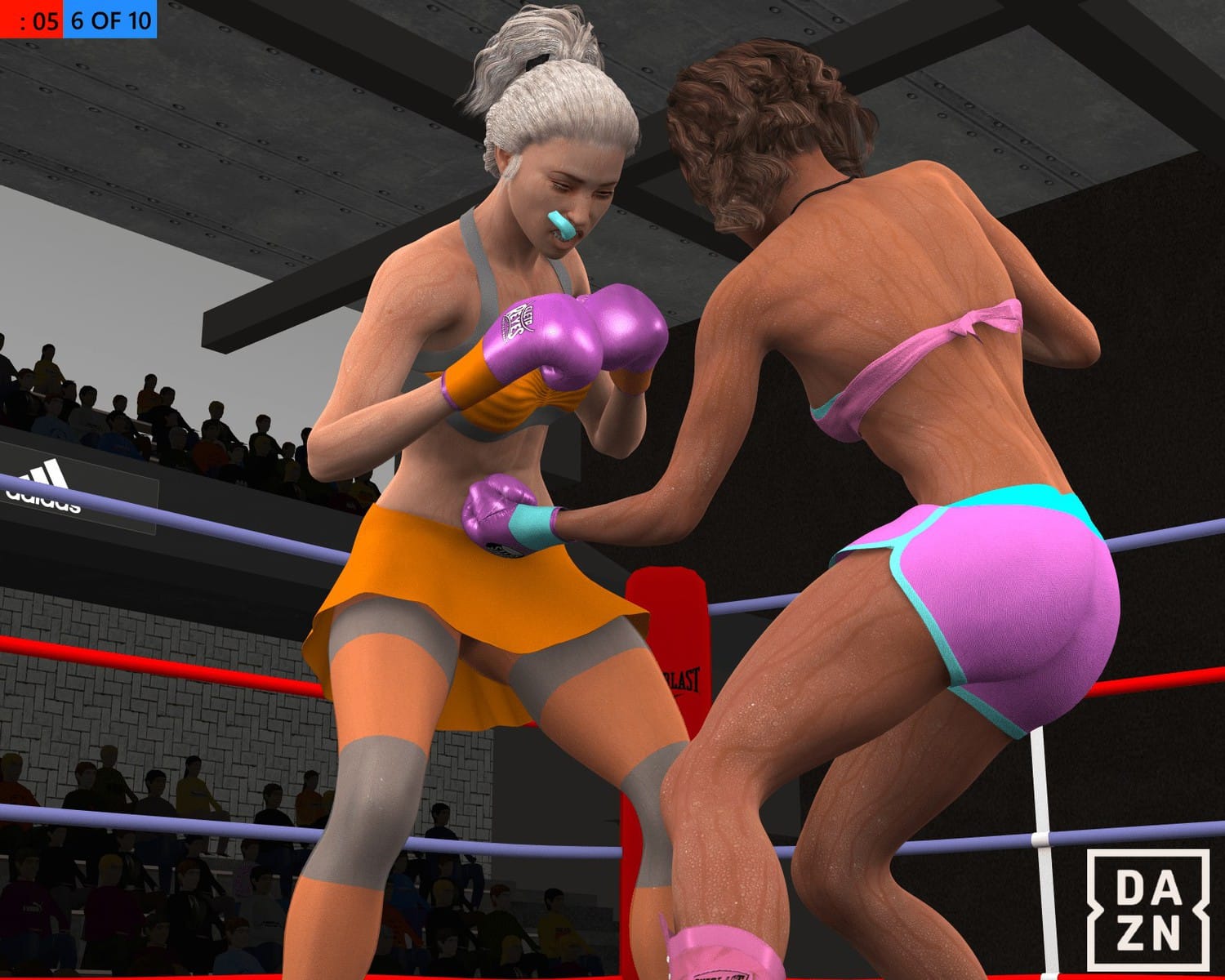 Laila: “We are early in the 7th round and Jessimin is hurt here! She took a solid right hand from Carla and her legs really buckled. ‘La Princesa’ can smell blood in the water.”

Virani: “I’d be surprised if Jessimin makes it out of this round without touching the canvas…she’s wobbled. Carla did the early work to the body to slow her down and now the punches to the head are taking the starch out of Jessimin. She needs to hope that Carla gets sloppy.”

Laila: “Annnd that was not sloppy at all! A wonderful left hook followed by a straight right hand drops Jessimin Reed! The American goes down hard!”

Virani: “That is killer killer instinct from ‘La Princesa.’ She knew she had her opponent ready to go and she gave her no chance. The feints that Carla used really opened her up for the punches she really wanted to land. It’ll be a long way up for Jessimin…” 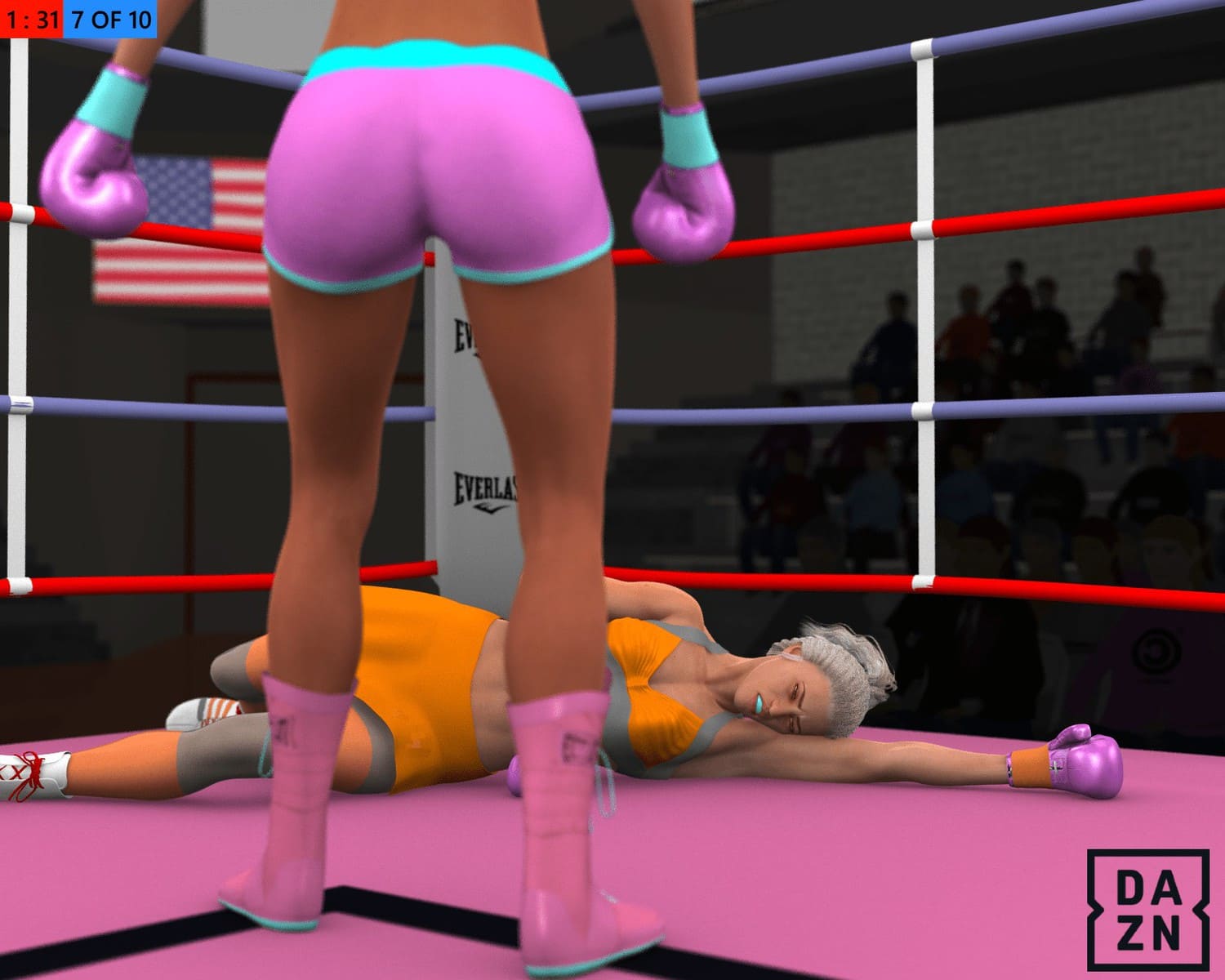 Laila: “Jessimin is up…but she can hardly stay on her feet! The referee stops the fight, and there is no protest from Jessimin’s corner. ‘La Princesa’ has won this one by knockout!”

Virani: “The correct decision from the referee caps a great performance from Carla Flores! It’s hard for a ref to stop a fight when a fighter gets to their feet, but Jessimin is really in no state to continue. She was losing the fight, and it was a good moment to make sure there is no further damage taken.” 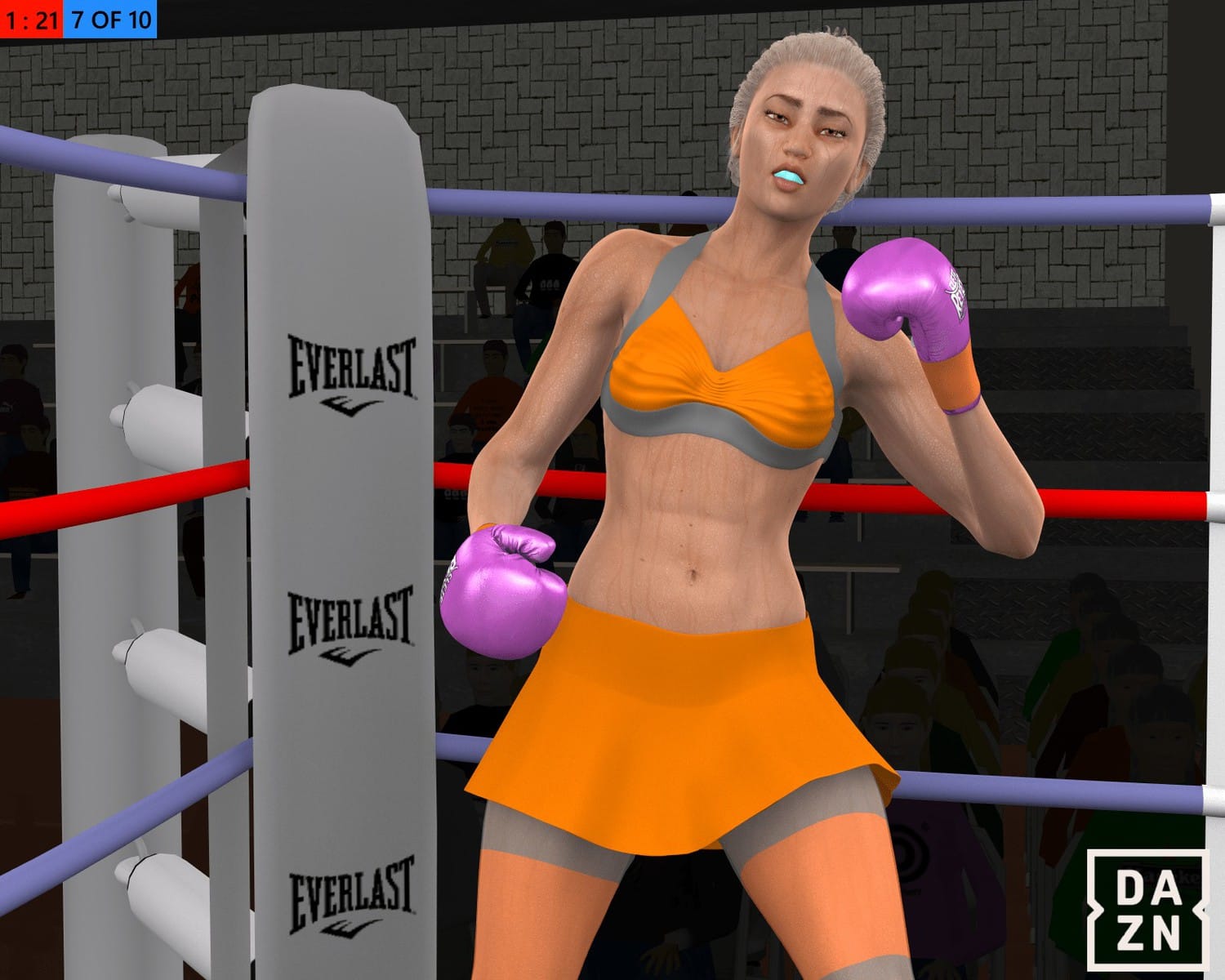 Laila: “With a victory in the books for Carla, she takes the plaudits for a fight that many thought she could win, but few thought she would do so in such style. That moves her record to 9-1 and a potential showdown with the woman beside me, Virani MacVicar. Tell me, what are your thoughts on the fight?”

Virani: “It was a very strong performance. Carla’s an action fighter that takes the fight to her opponent, and that’s a type of fighter that can be difficult to stop when you don’t have the tools to stop them, and Jessimin simply did not. Carla showed how strong she was when she was fighting her fight.”

Laila: “So maybe it’s time for a showdown between the Mexican and Canadian champion?”

Virani: “I’ll let her have her moment, but yeah, I want to see her up close.”

After the usual business is completed, Virani climbs into the ring with Carla. Virani nods and shakes Carla’s hand, congratulating her on a strong performance. 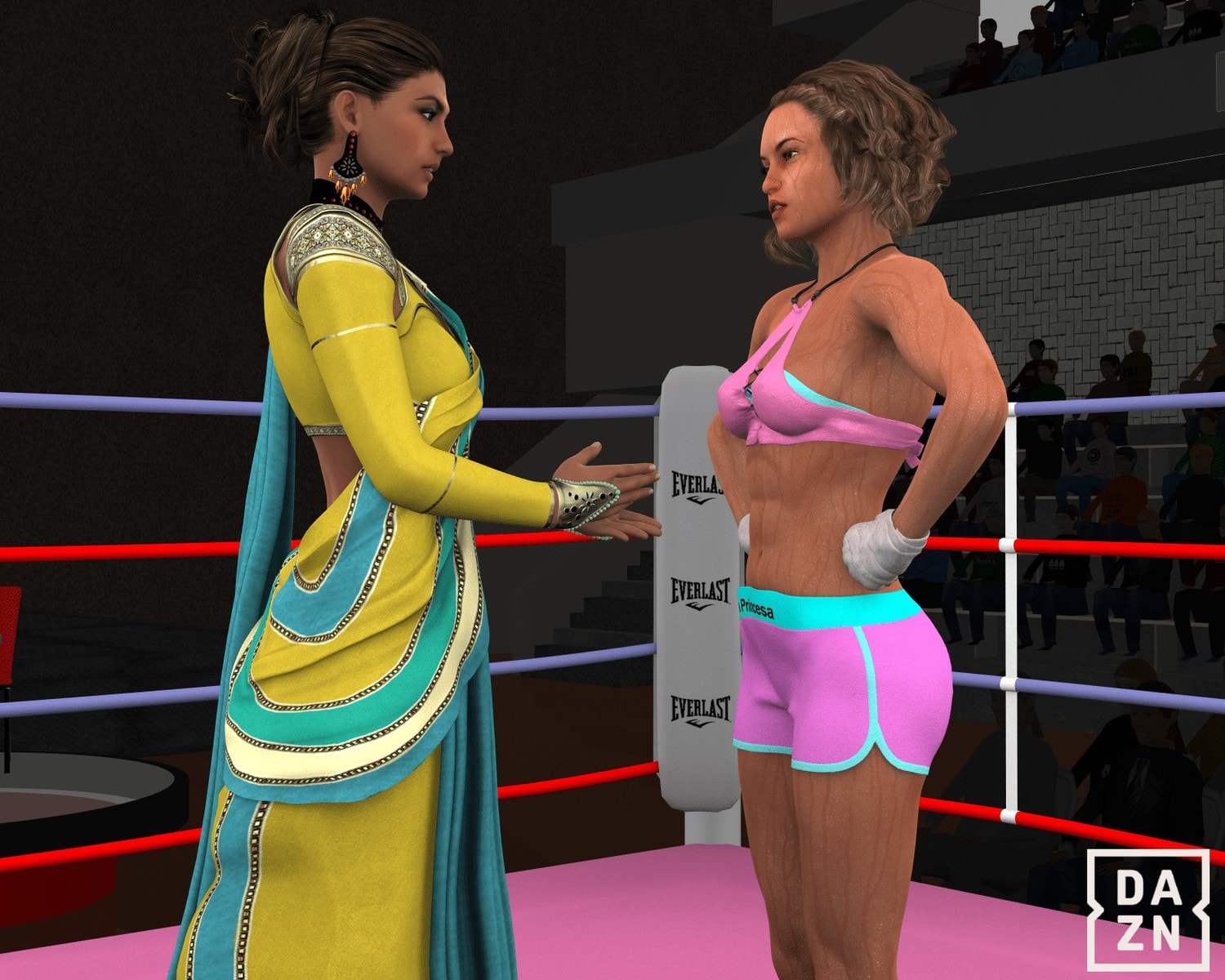 Virani: “Congratulations on the win.”

Carla: “Thank you. No time wasted to set up the next fight, I see.”

Virani: “That’s how the game is played.”

Carla: “I want to fight you next. I want the Cobra.”

Carla: “I do. This is not trash talk or mind games. I want to fight one of the best in the division and you are it.”

Virani thinks: I want this fight too. The champion of Mexico would be a big scalp if I can beat her, and I don’t see why I can’t. I’m better than Jessimin.

Laila: Carla Flores vs. Virani MacVicar…I think the fans want it, I think the fighters want it. I think we will see that as a fight on DAZN shortly!” 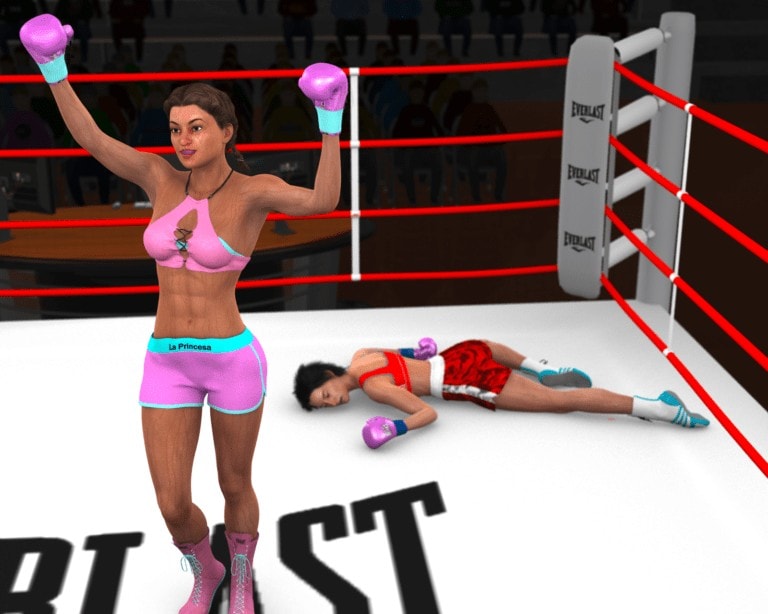