Berlin – Box TV Championship is on the air with analyst Esther Schouten at the helm. The final of the evening’s program features Anastasia Orlova’s world title defense against Victoria Owen (11 wins, 7 KO, 1 loss), from England.

Ranked 9th by the Women’s Boxing Union, Victoria is keen to take the fight for the title shot and payday. Anastasia (26 wins, 9 KO, 5 losses, 3 draws) looked at the promoter’s idea as good for a tune-up between big matches. A great way to stay busy and notch another win.

Known for her pure aggression, Victoria’s plan is to take the fight to Anastasia and do what others have been unable to do lately: hit her. The hope is to knock the Super Lightweight champion off her pedestal with the clean punches others have failed to land.

The fight begins on a very positive note for the Englishwoman. She steps in, finds her range and throws fast shots to disrupt the Russian’s long-range game.

Esther: “It’s a good early showing for Owen, who does what challengers are expected to do against champions. She takes the fight to Orlova. Her hand speed and fearlessness could help her pull off the upset if she remains consistent.” 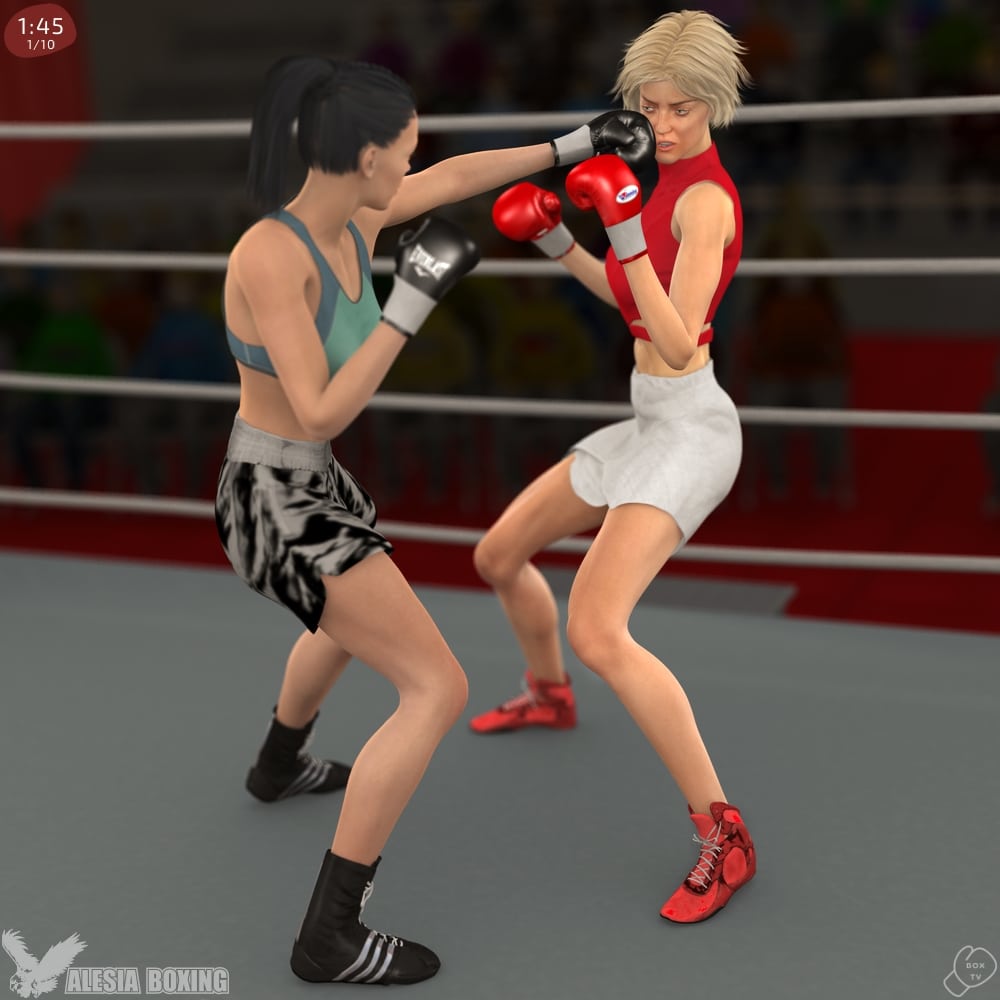 This plan works well for a couple of rounds. Victoria’s aggression makes her land decent shots. Anastasia absorbs and remains patient while trying to figure out how she can beat her opponent.

The champion hits the accelerator in Round 3. She uses her long legs to move backwards and dare Victoria to keep coming forward. It works. Victoria can’t reach her opponent anymore. The champ starts landing devastating counterattacks. This left uppercut near a corner halts all forms of movement, and intimidates the challenger.

Esther: “A few more punches like this and Owen will soon have the consistency of spoiled yogurt. Orlova is milking her best assets well. Holy cow.” 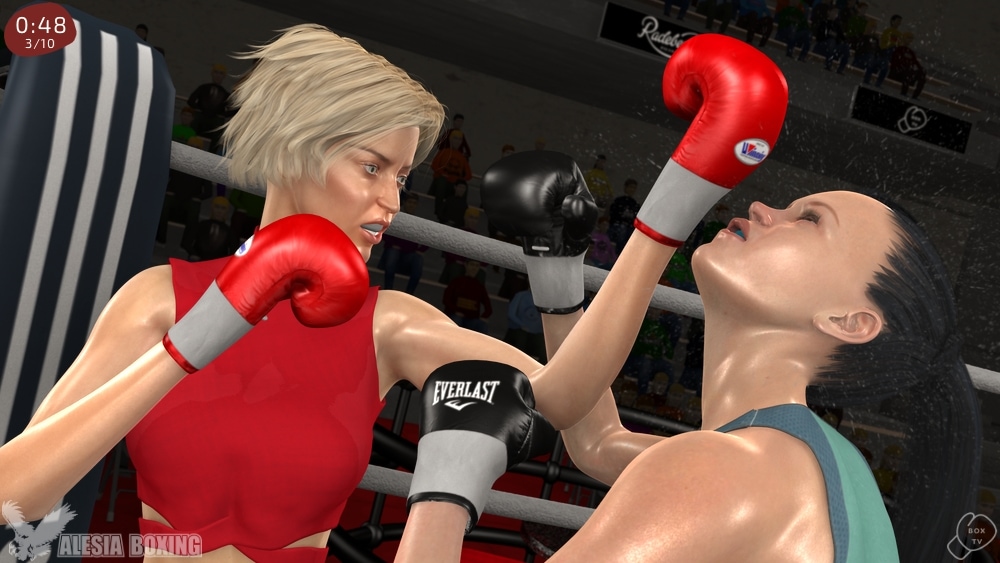 Between Rounds 3 and 4, Anastasia’s coach tells her to take control. She does it very well. She keeps fighting backwards, but stands her ground at select moments to pummel Victoria with powerful intercontinental ballistic missiles. The Russians do know that technology well.

Esther: “Orlova is one of the most dangerous female boxers in the world for a reason. It doesn’t take much for her to harm a challenger’s health as she currently does with Owen. Those counterattacks cannot be taken for long, by anyone.” 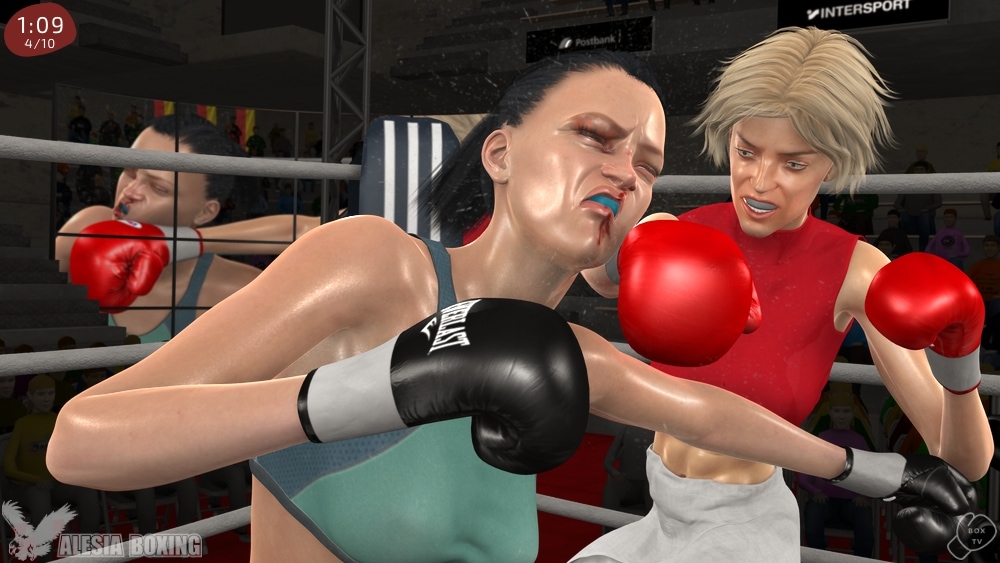 The Englishwoman’s right eye puffs up. Blood comes out of her nose and mouth. This is Anastasia’s ring now, and she takes ownership in more authoritative fashion than the challenger did earlier. The crowd rewards her with wild cheers because it knows what to expect: damage. The kind of pain that nobody else in the division can inflict as accurately, except maybe for Taylor Grant.

Anastasia’s domination continues in Round 5, with one wicked twist. Victoria is afraid of coming forward, so the champion attacks. She batters the challenger around the ring, taking her to the ropes and corners regularly. Hard punches land, and Victoria is out of her league.

Right after the 20-second mark, the Russian’s coach yells: finish her!

Anastasia pounces on her prey, takes her to a corner and unloads mercilessly. The helpless fighter is unable to defend herself. She now hopes to go down fast… or see the referee end proceedings.

Rebecca Linden, who officiates her second world championship, recognises that it’s time to step in. She stops the action and awards the TKO.

Rebecca: “Enough! The fight is over!” 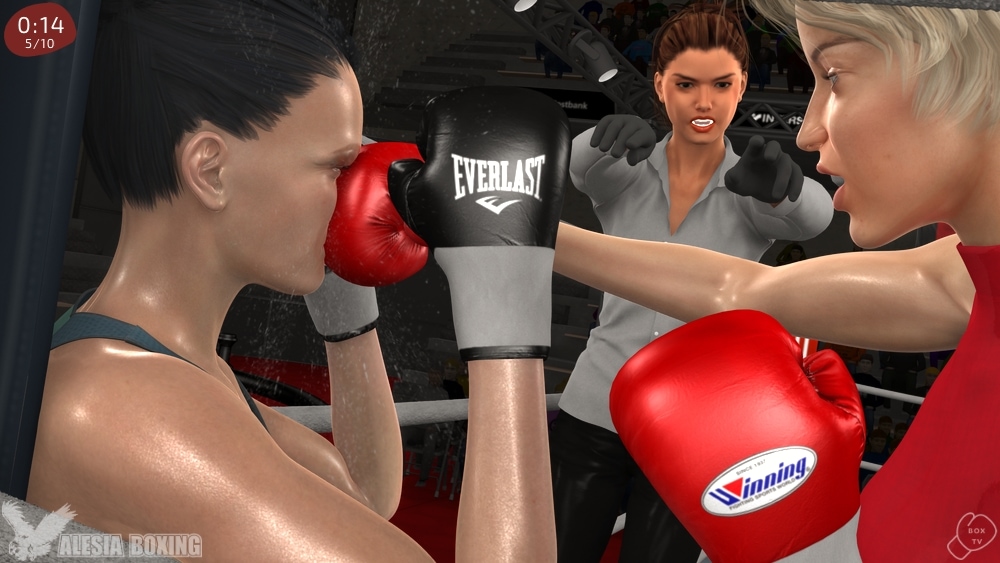 Esther: “What we have seen here today is a demonstration of skill and appetite for destruction. Anastasia Orlova never looked more dangerous, with two straight knockout victories that leave no doubt as to who is the best Super Lightweight of the world.” 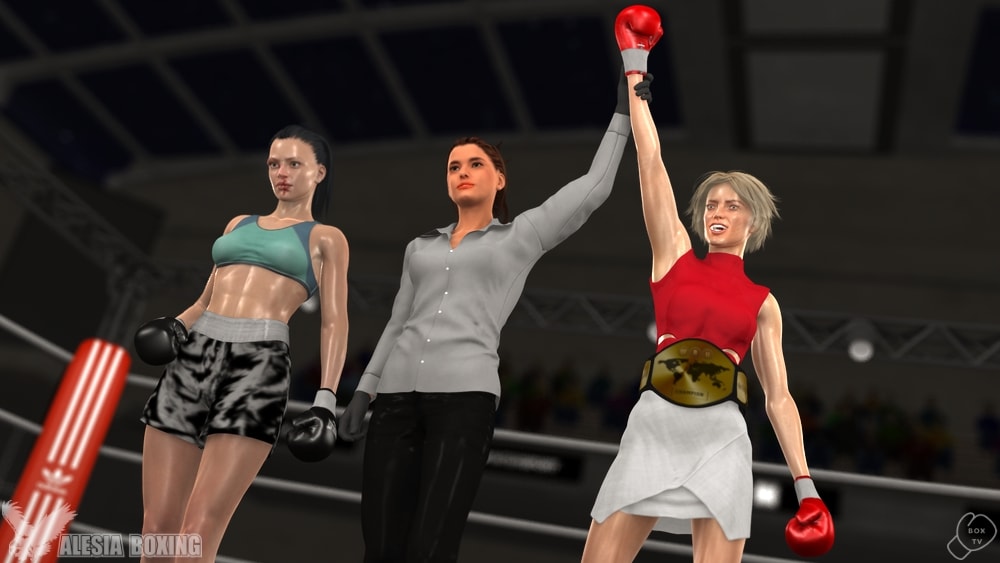 In the post-match comments, Anastasia recognises the limitations of her opponent.

Esther: “Although Victoria was ranked 9th ahead of the fight, wasn’t this a glorified tune-up?”

Anastasia: “Maybe it was, but she was a game fighter. I’m aiming for a bigger match soon. I’d love to make a deal with Taylor Grant if that’s possible. She is my number one challenger and the most dangerous threat to my crown. I would be very happy with such a showdown. I know she wants me anyway.”

Esther: “What if you can’t make that deal?”

Anastasia: “There are other options as well. I never fought Chloé Potvin. She never got a title shot. Why not? I also like Alesia Schumann. A world championship between us in Germany would be a hell of an event. She said no the first time, but she’s ambitious. I’d love to sit down with her for coffee and make an offer. I can make the financials attractive.”

Alesia jumps to number one!