Shut up, brain I’m 2-0. Kasandra commanded, shaking her arms out and bouncing on her toes, just to preoccupy herself a bit. The other girl was finally in the ring. Honestly it looked like they had plucked a random fan out of the crowd, put boxing gear on her and sent her into the ring. Carolyn Jones was soft around the middle and though she had some definition on her arms, Kasandra had seen fitter looking people go jogging past her apartment.

All she needs are two fists, Kass. And she has those.

Behind her, Thomas gave her a gentle nudge. “Don’t focus on her, focus on you. Start with the jab, find the range. She’s going to throw wild punches at the start. Fight smart and it’ll come to you.”

Kasandra nodded. It was nice not to have to listen to her own self-doubt. It was nice to have an actual plan, with an actual coach who had scouted her opponent previously.

The not quite half-full arena cheered as the Ring Announcer stepped to the middle of the ring, “Ladies and Gentleman, Welcome to the Danforth Music Hall here in downtown Toronto, Ontario! We are proud to present live boxing to you tonight. Our first bout of the evening is in the Featherweight division and is scheduled for 4 rounds. Introducing first, fighting out of the red corner. She comes into tonight with a perfect professional record of two wins and zero losses with both of those wins coming by way of knockout. She weighed in at a trim 126 pounds. Fighting out of Toronto, Canada by way of Gdansk, Poland, please give a warm welcome to Kasandra Sobieski!” 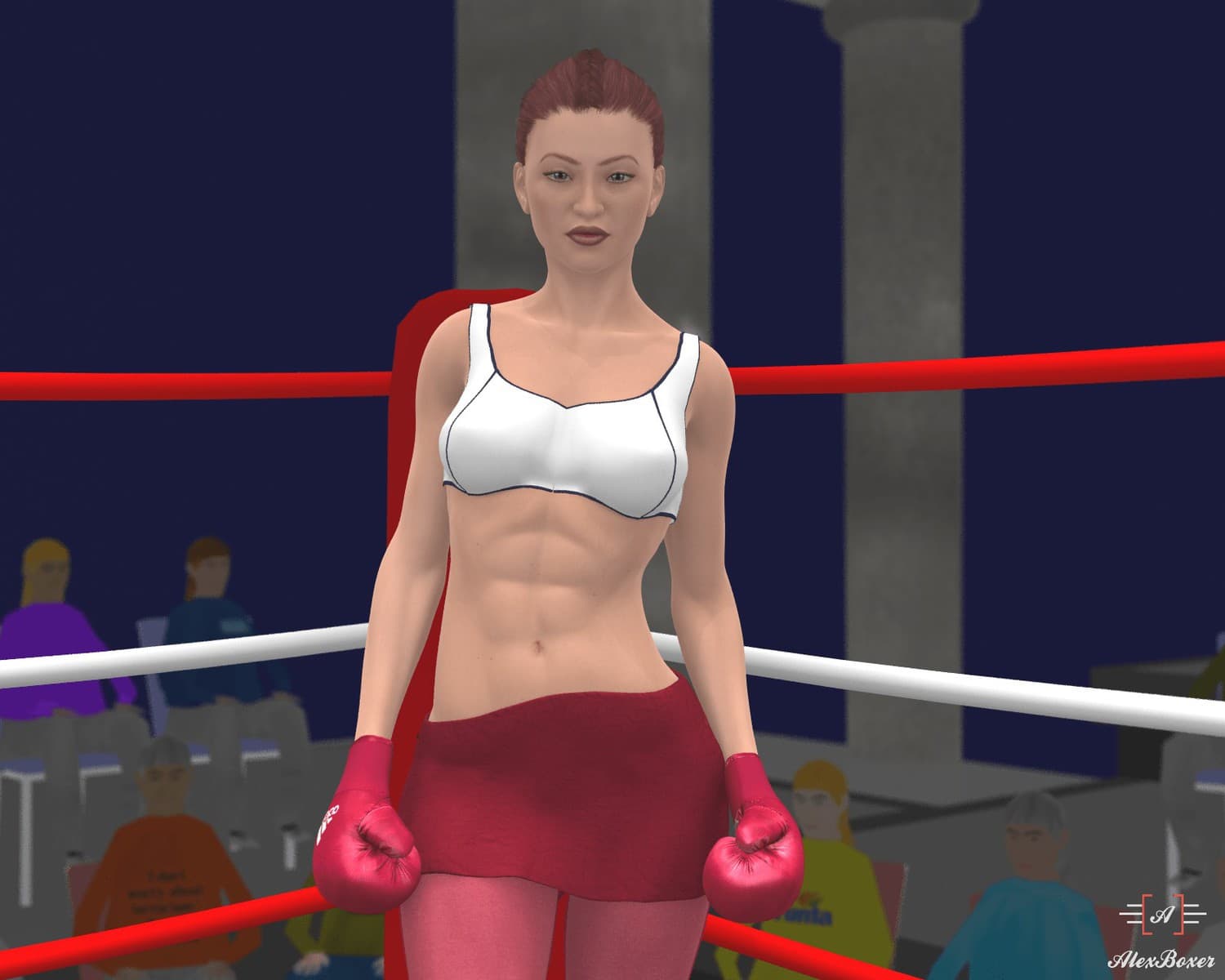 Kasandra stared ahead unenthusiastically, but had to grin a little, at the small amount of applause that she did get.  It was better than nothing, after all.

The Ring Announcer looked back down at his card, “And in the blue corner is her opponent. She has a professional record of no wins and one loss. She weighed in at 126 pounds. Fighting out of Oshawa, Ontario, Canada, please show your support for Carolyn Jones!” 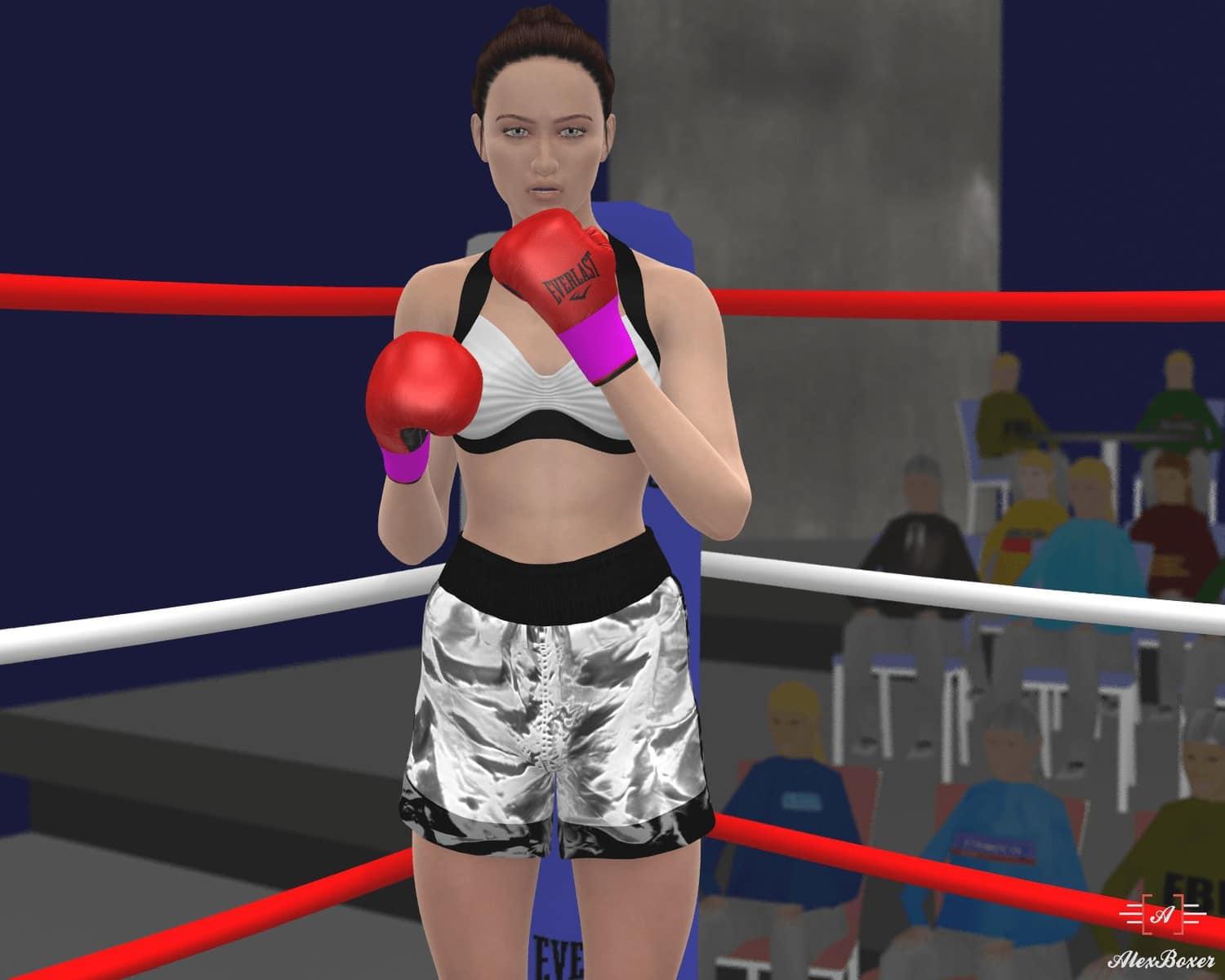 She glanced at Carolyn’s reaction to being introduced, but then focused on herself, jumping up and down to get the blood flowing into her legs. Next, she was called to the middle of the ring for the referee’s instructions, with Thomas right behind her. Kasandra didn’t really focus on the referee’s instructions, listening with half an ear as she stared at her opponent. Carolyn seemed nervous and if she had to guess…she looked like she didn’t really want to be here, which was an odd thing to sense from your opponent. She had gotten that sense only once before, from an opponent in the amateurs. That girl had comprehensively outboxed her for 3 rounds and took an easy victory. Somehow she couldn’t see Carolyn pulling off the same result.

“Okay, touch gloves, and have a good clean fight,” commended the referee. Kasandra touched gloves with Carolyn and then turned to walk back to her corner. Once in the corner, Thomas held out her mouthpiece in his hand and he gently placed it in her mouth. Kasandra bit down to get it in the right place in her mouth. Now it was really go time.

Kasandra nodded, her heart beating somewhere between one thousand and two thousand beats per minute. She looked across the ring for the referee and made eye contact.

Kasandra rushed quickly to the middle of the ring, claiming the centre for her own. Carolyn seemed a bit surprised by that and stood flatfooted in front of her, so she fired a jab off of her back foot. It missed by quite a bit, but it provoked Carolyn into throwing a wild overhand right in response. Kasandra took a step back to make sure it missed. It took her opportunity for a counter away, but it also meant she didn’t get hit. 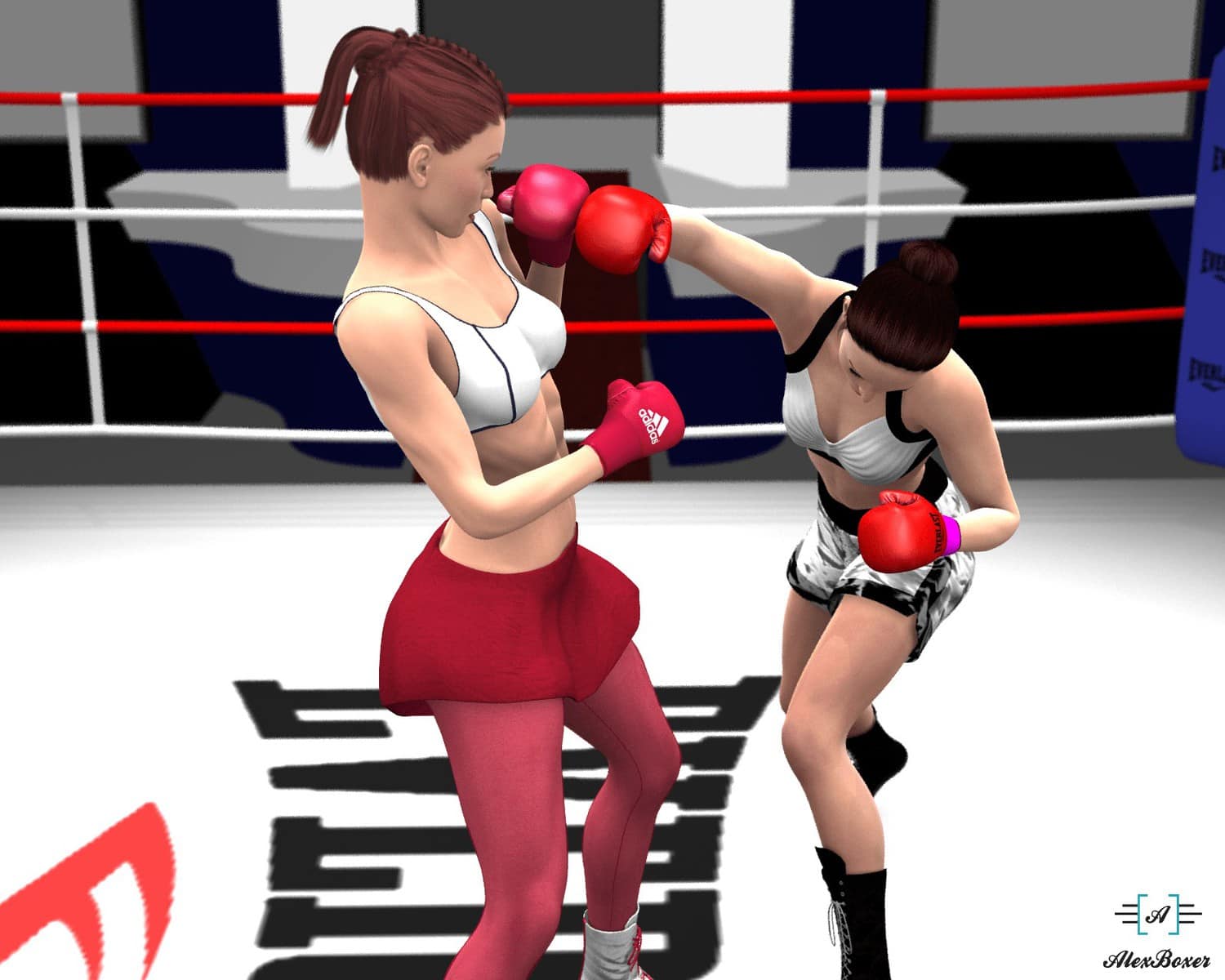 Kasandra ceded the middle of the ring and circled, watching Carolyn try to plod after her. Not very good footwork, she noted. Kasandra stood her ground for a moment, raising her guard high, seeing what reaction that would provoke from her opponent. Carolyn stood a little short of effective range, daring her to do something. Kasandra chose to circle again and reset. No need to take a risk early in the fight.  This one was still in the feeling out phase.

Kasandra stopped circling, and the moment she planted her feet, Carolyn tried to throw another wild overhand right. Kasandra avoided that one easily and then pumped a jab at Carolyn’s face, which landed flush, flattening her nose for a moment. The Canadian fighter raised her guard and backed off.

Pattern established, Kasandra waited for Carolyn to throw another wild punch. Carolyn obliged. This time, Kasandra stepped to the side and then drove a right hand into Carolyn’s exposed flank, producing a grunt from the Canadian. Kasandra could have tried for more, but chose the pragmatic approach. Early returns indicated that this girl that she was facing was not exactly of the highest level. Therefore no need to take risks. But there was no reason to get careless either. 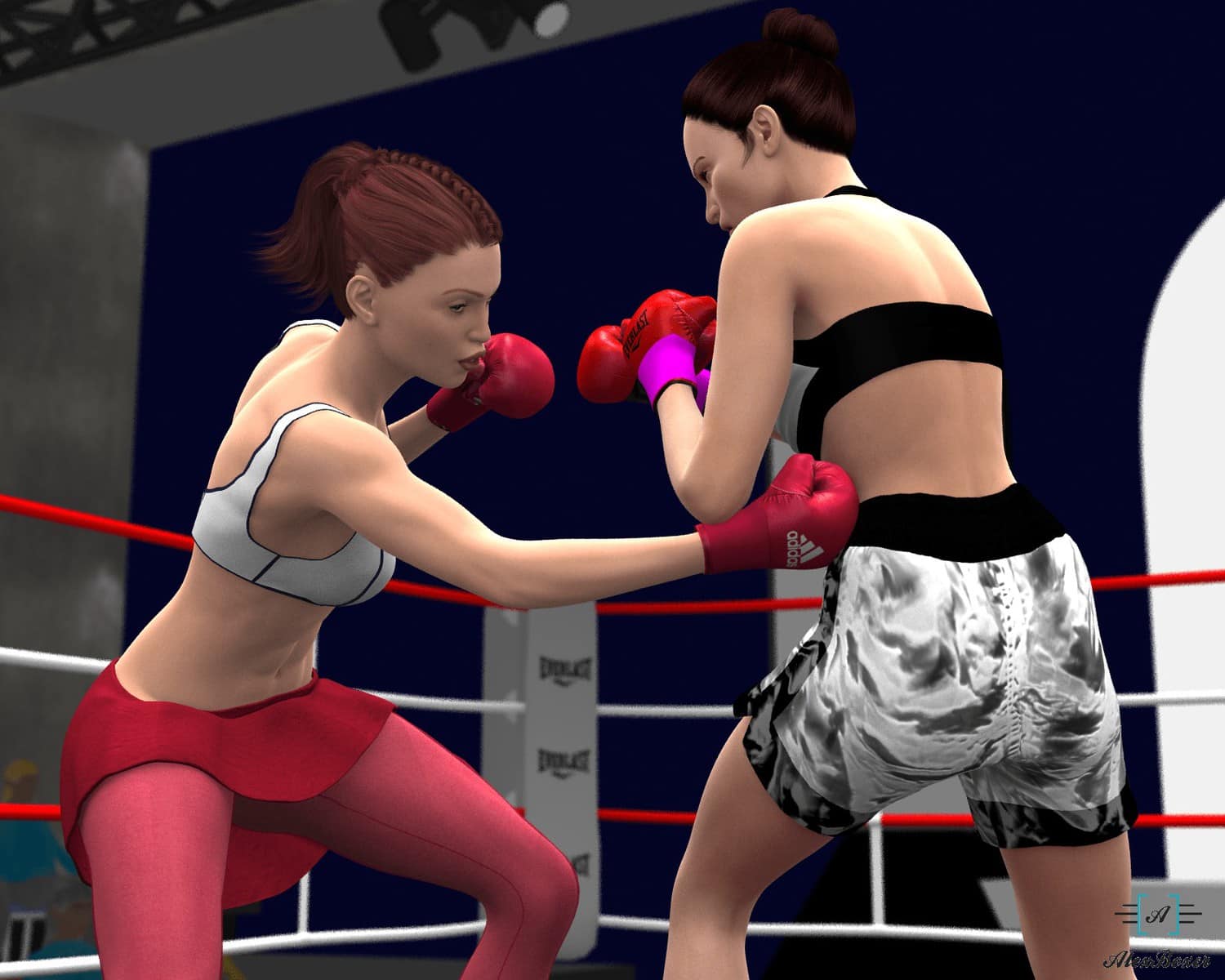 Having mostly been passive early in the fight, Kasandra was feeling the need to up the tempo, just a bit, just with the jab. So she crept forward, shuffling with short, quick steps, keeping her weight well balanced and poised to make a sudden defensive movement if needed. Carolyn, perhaps a bit stung from the last time she had thrown a punch, seemed content to let her make the first move. Kasandra threw a pair of quick jabs from the shoulder. Kasandra’s first left hand brushed her opponent’s face, making light contact, the second was blocked by Carolyn raising her gloves.

Having totally forgotten about being nervous a few minutes ago, Kasandra’s feet moved without conscious thought, shuffling to new angles and giving her opponent a moving target. She shuffled her hands for a moment, seeing if she could get her opponent to overreact, but Carolyn only seemed intent on firing wild, looping punches. Those punches were easy to dismiss, but if one of them landed, Kasandra had no doubt it would hurt. Her opponent was swinging for the fences.

Kasandra fired a jab, not to land or do damage, but to get her opponent backing up. Apparently oblivious to the fact she was going towards the neutral corner, Kasandra pressured her with her feet, guiding her steadily towards the corner. 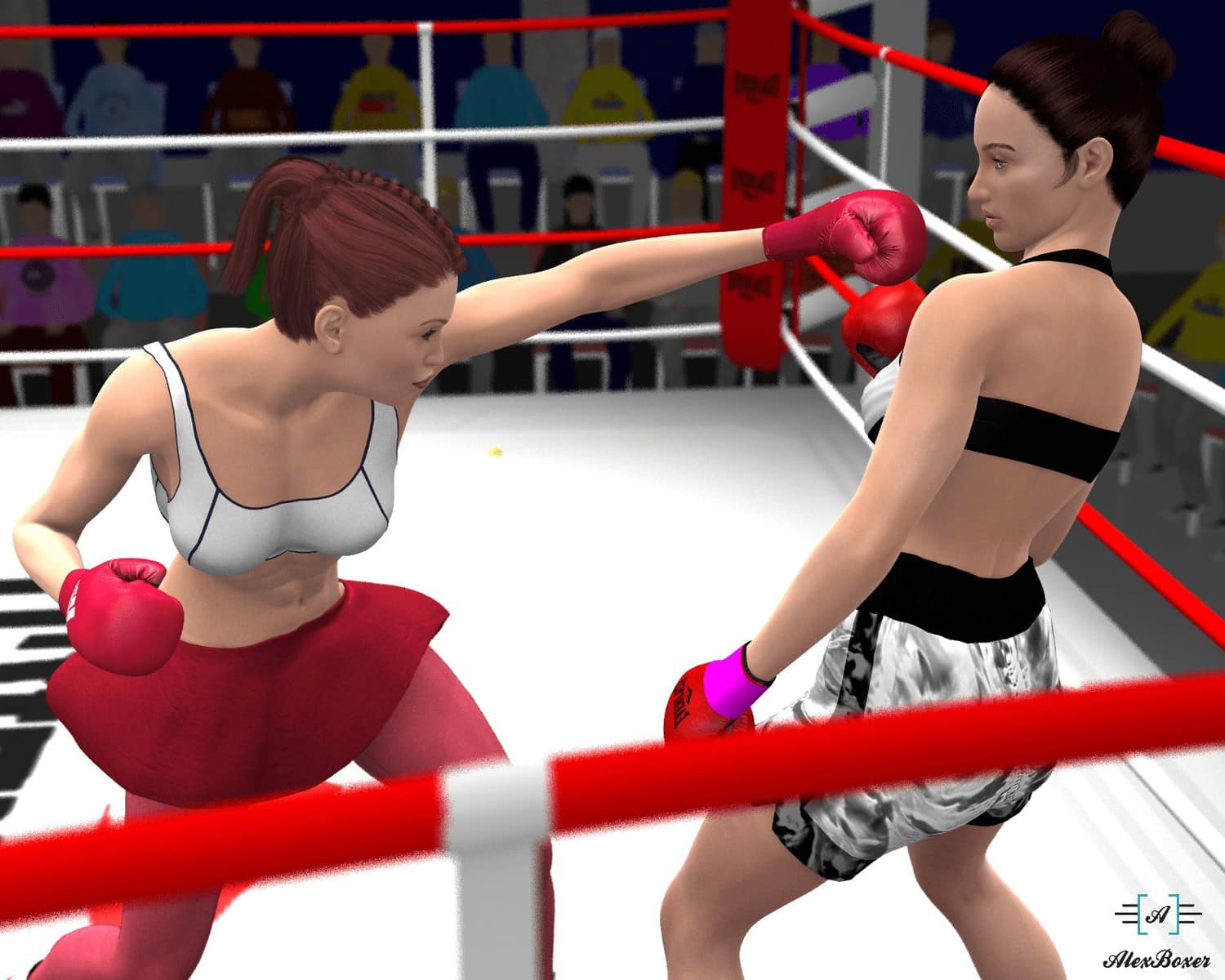 Carolyn bounced her back off of the ropes and came off towards her, Kasandra tried to pivot her body to land a jab, but Carolyn’s landed first, glancing off the top of her head. But with her left foot outside of Carolyn’s rear foot she had the better positioning, and her followup overhand right caught Carolyn awkwardly on the face, while her own punch harmlessly fizzled out.

Kasandra paused for a split second, then realized that Carolyn was still in the ropes and wasn’t making any move to escape. The Polish fighter’s instincts kicked in and she fired away with left hooks and right hands, while Carolyn did the same. But Kasandra had the better positioning, not only did she have her feet in the dominant position, but she wasn’t in the ropes like Carolyn was. Kasandra fired away wildly and Carolyn did too. 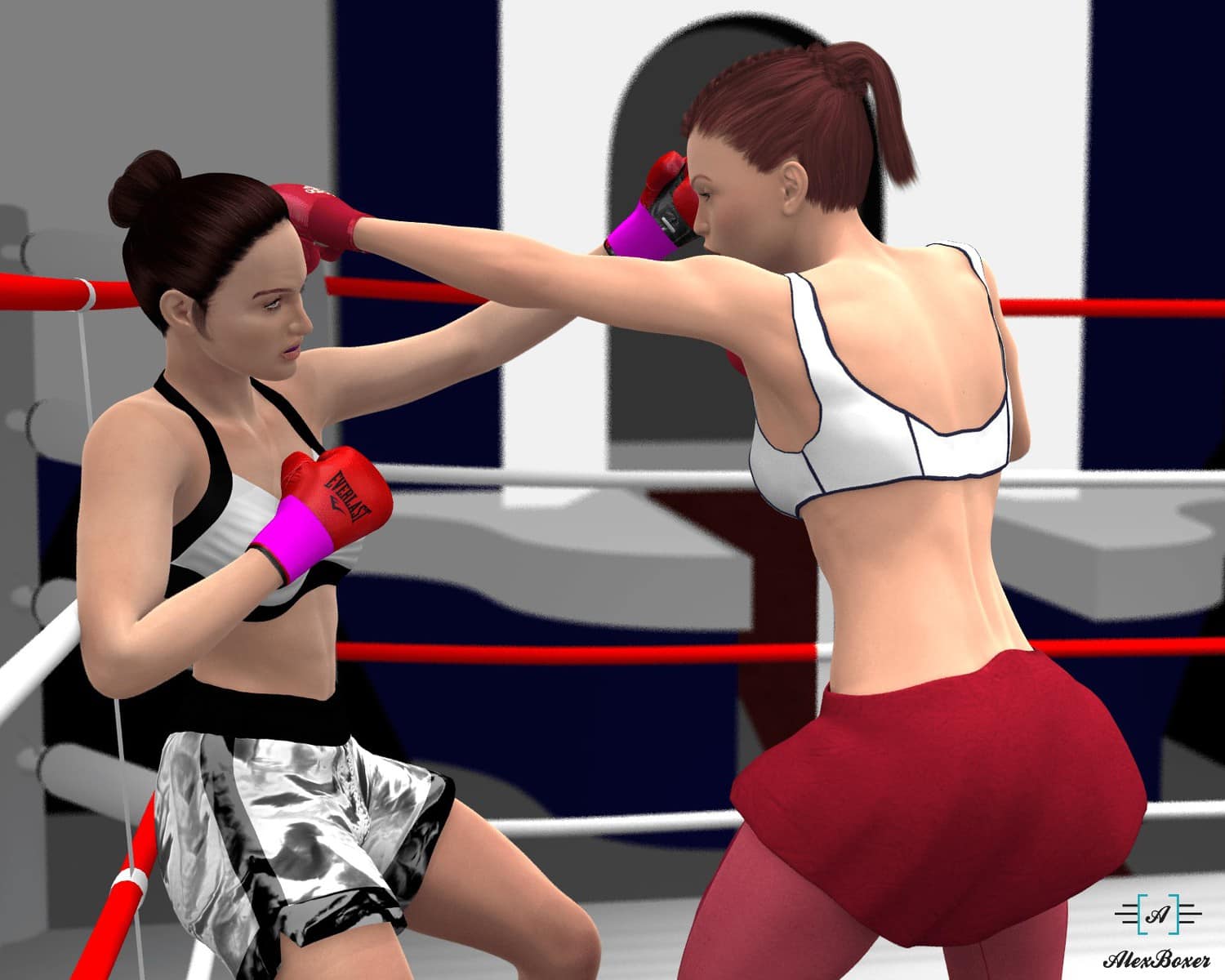 Kasandra reset her feet to keep firing away, changing her target to throw a left hook to the body. It landed a bit higher than she had wanted, but it had landed. She doubled up on the left hook, catching Carolyn a bit high on the head. Carolyn bent over but kept firing, landing an inconsequential left hook of her own just under Kasandra’s eye. Still flurrying, Kasandra kept her punches shorter and landed a chopping right that finally landed on Carolyn’s chin. 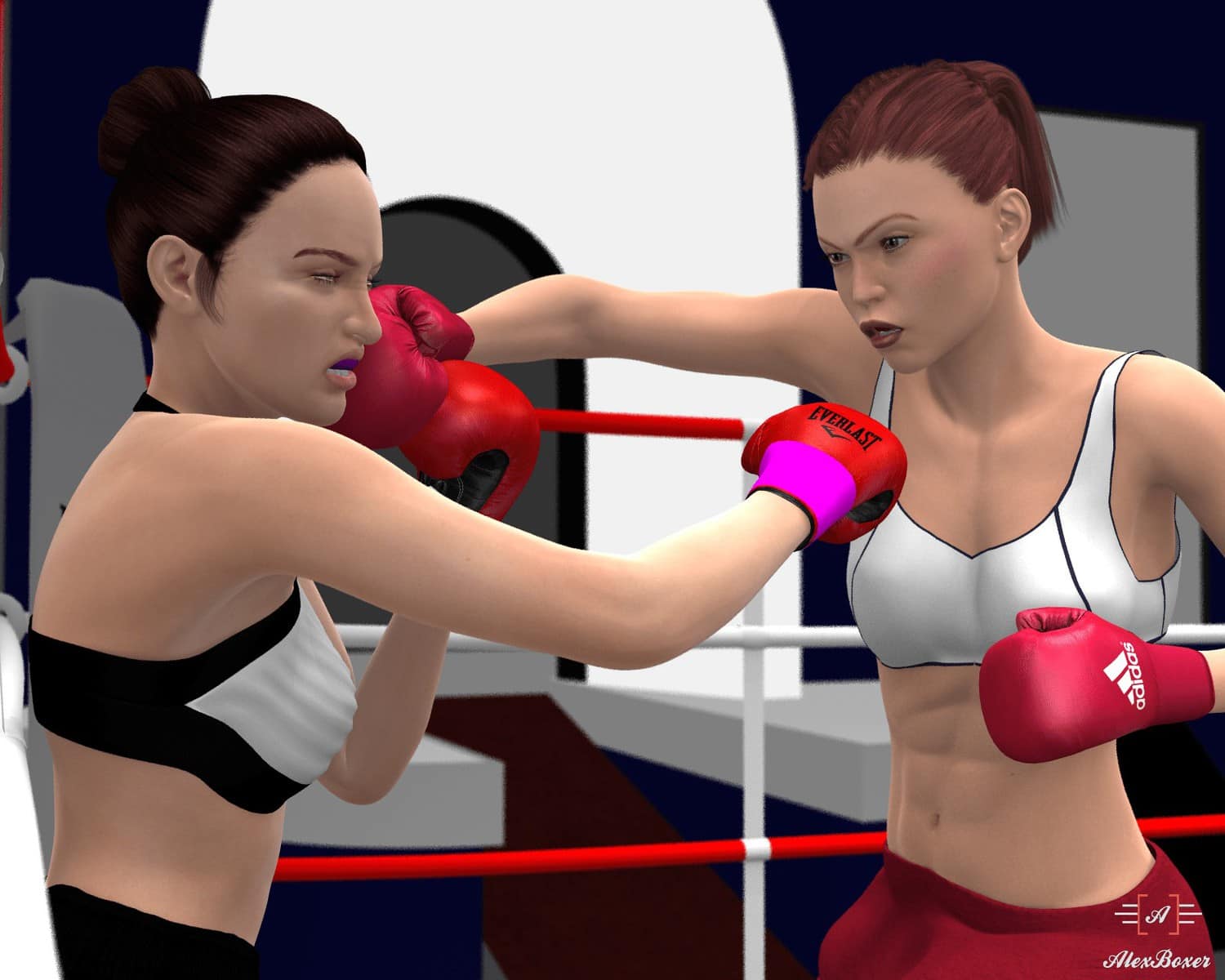 The Canadian fighter dropped, her butt hitting the lowest rope before going down to the canvas in a seated position. 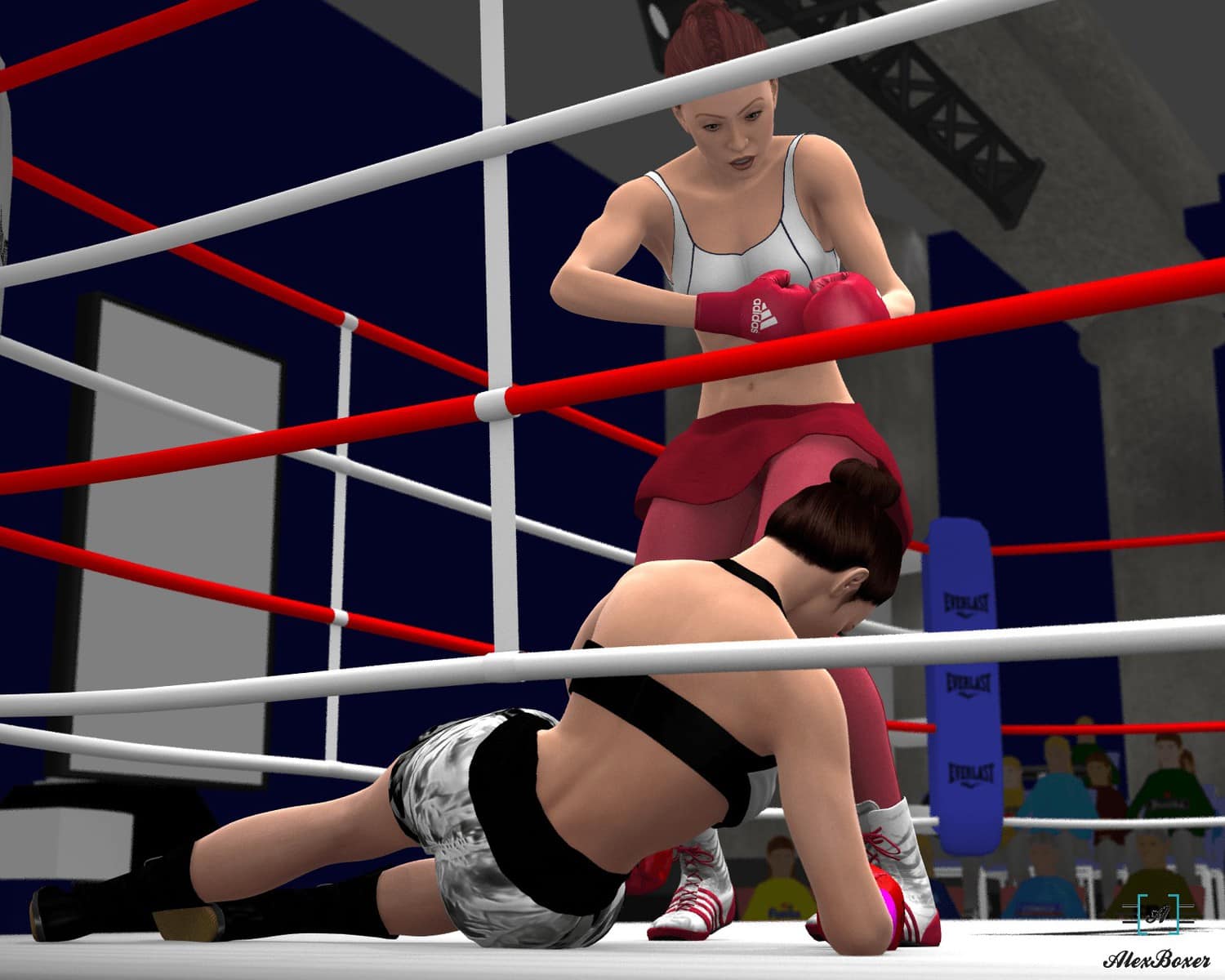 Surprised, given that she hadn’t landed anything particularly powerful, Kasandra still was experienced enough to know what to do, proceeding to the neutral corner before the referee could even step in and order her there.

As she walked to the neutral corner, she glanced into her corner and got a thumbs up from Thomas. That hadn’t exactly been her gameplan, but with Carolyn in the ropes, she had gotten a bit wild. She resolved to be a bit more patient when the fight inevitably resumed. Kasandra kept herself focused, watching as the referee counted Carolyn. The Canadian was still down in the seated position, shaking her head, probably in frustration. Kasandra had landed some punches, but realistically, she hadn’t hurt her opponent.  Maybe Carolyn had just slipped.

Kasandra waited in the corner and waited as the count continued. It was up to six, and then seven, then eight and then nine…and Carolyn was still down and not making any attempt to get up…

“Ten! She’s out!” The referee waved her hands over Carolyn, who had moved on to all fours. And just like that, the fight was over. 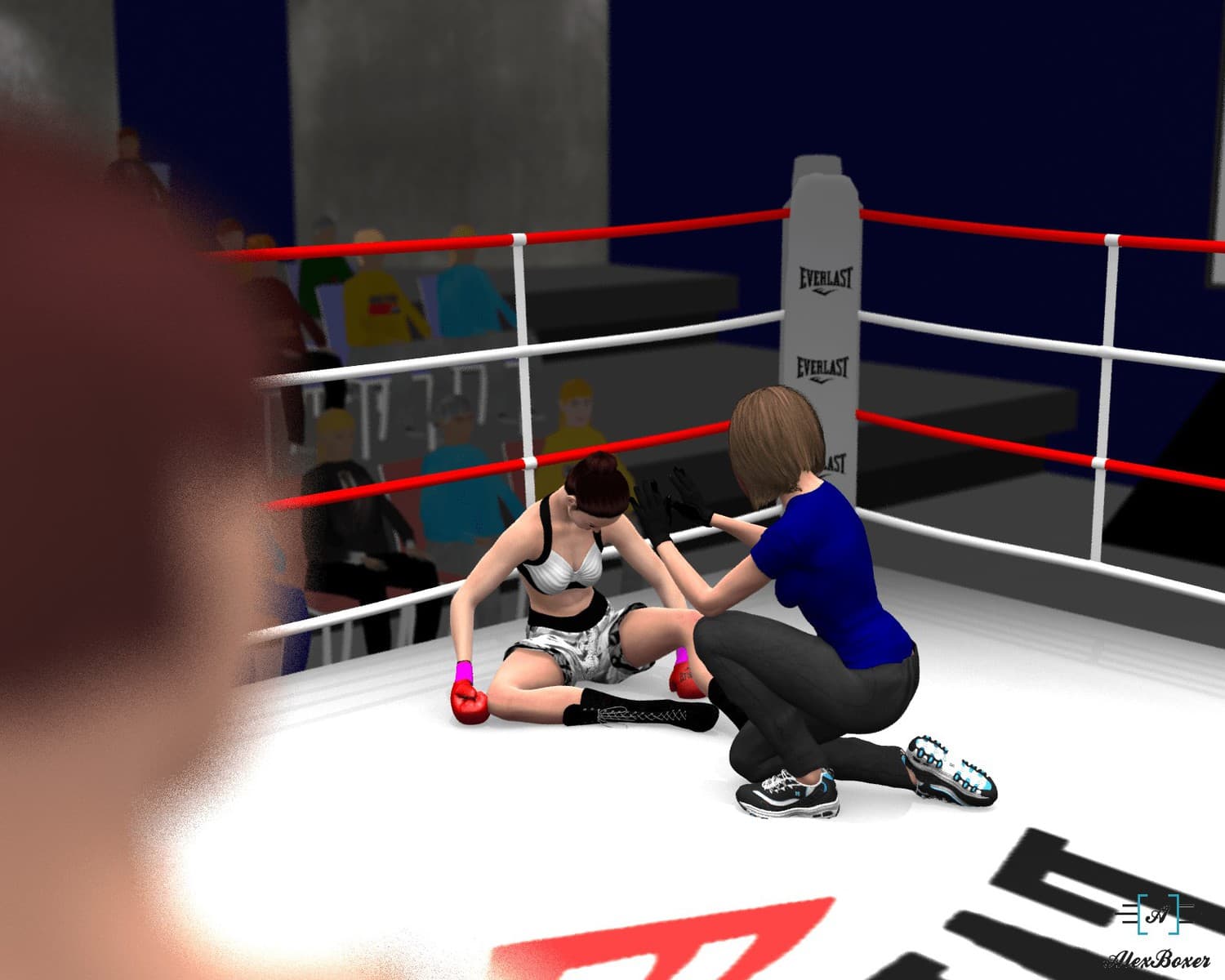 What the hell. She didn’t get up. I won?

Kasandra walked back to her corner in a daze, still not really believing the result. “Good job, Kasandra!” shouted Thomas enthusiastically. 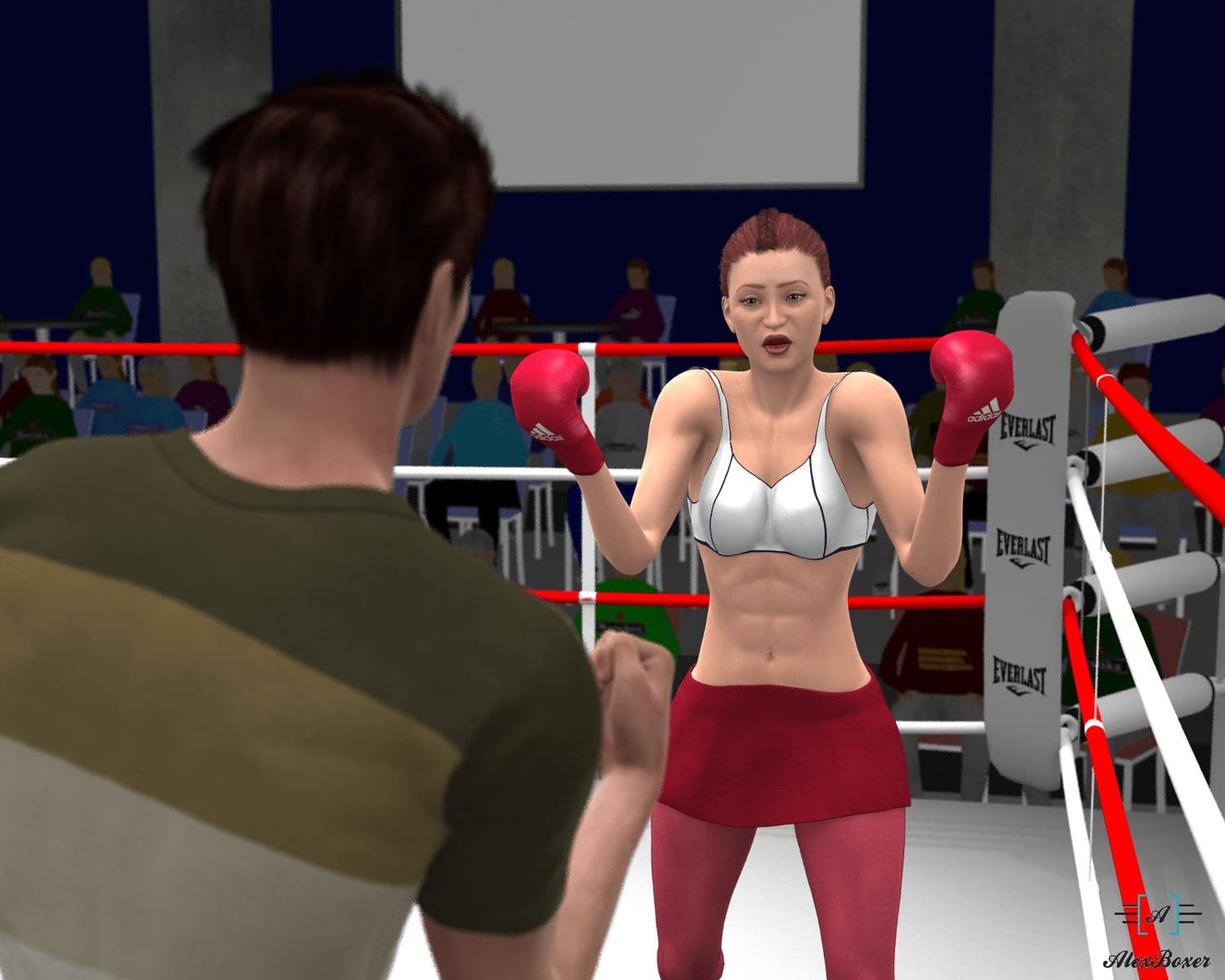 Thomas shook his head in disappointment, “That girl was just there for a paycheck. I guess she decided that she was going to take a few punches and go down.”

“I don’t understand. She wasn’t even trying to win?”

“Apparently not.” Thomas shook his head again, “But you did exactly what you were supposed to. Good work. Three wins, no losses now.”

Kasandra got called to the middle of the ring by the referee and she dutifully went to the referee and waited for the official decision to be read. The ring announcer sounded pretty bored as he announced her as the winner by knockout at 1 minute and 1 second of the very first round. The referee raised her arm and she smiled as the fans applauded.

After the moderate amount of clapping died down, Kasandra thanked the referee and walked back to her corner. Anita had joined Thomas in the corner, and gave her a big thumbs up, “Good job Bombel!”

Thomas grabbed her hands and started unwrapping her gloves. Kasandra shrugged her shoulders, “I barely did anything.”

“I know,” Anita replied. “We’ll have to bring in better opposition, but you came in and you proved that you are no fluke.  That’s something.  Each time you get in the ring, you’ll get a bit more experienced.”

“This was barely an experience,” she complained.

“Honey, you got paid for about a minutes worth of tough work.  There are worse things.”

Kasandra flexed her hands after Thomas had finished getting her gloves off, “I worked hard to get into shape, only for this girl to fall down on cue?  Seems a shame.”

“It is what it is,” Anita said.  “We’ll find someone better for your next fight.”

Kasandra nodded and exited the ring.  It hadn’t been a hard fight at all, but she had made people happy, and that had felt pretty good. Hopefully all of her nights would be like this.

A Polish-Canadian created by Alesia and now owned by Alex. She is known for classy technical boxing.
Profile
Support us
Characters and brands owned by us unless credited otherwise. Real-life elements used only for artistic purposes. You are NOT authorised to make derivatives. Icons credit: Font Awesome.
RSS Twitter Contact PRIVACY POLICY
2022, Alesia Schumann, AlexBoxer