Sophie Schumann has the second fight of her professional career in the boxing hotbed that is Hamburg against Nancy Slater, from England.

The bosses at DE Box-Promotion have picked Nancy as an opponent for one reason: Sophie needs to gain experience in the pro ring.

Nancy fits all the requirements for this four-rounder. She has an 8-8 record, a good chin, stamina, a decent punch, as well as some limitations. She’s battle-hardened and courageous enough to stand in the ring with a young puncher who can strike fear into most boxers. However, she’s not a destroyer.

Before the fight starts, Regina Halmich gives her protégée the main instructions.

Regina: “Work within the style that we’ve developed since your last fight. Teenage Tyson. Compact with diagonal movement, patience, power shots from angle. Let opportunities develop, and use them as they appear.”

Nancy is aware of her role in that ring after a discussion with the promoter, who is keen to avoid the turmoil that Clara Aubert caused in Sophie’s pro debut.

Heidi: “I know that facing my best young prospect makes the odds of winning slim, but we’re giving you a nice purse for putting in a good shift. Make Sophie earn her way and I’ll reward you with more gigs, with the next one being a lot more favourable. If you take a dive after couple of clean shots, we won’t work together again.”

Nancy agreed. She sets out to attack early in the first round, and annoys Sophie with a jab that has zing to it. The young German doesn’t panic. She gets tagged a few times, but improves her movement and fires back with her own jab, which carries more weight. 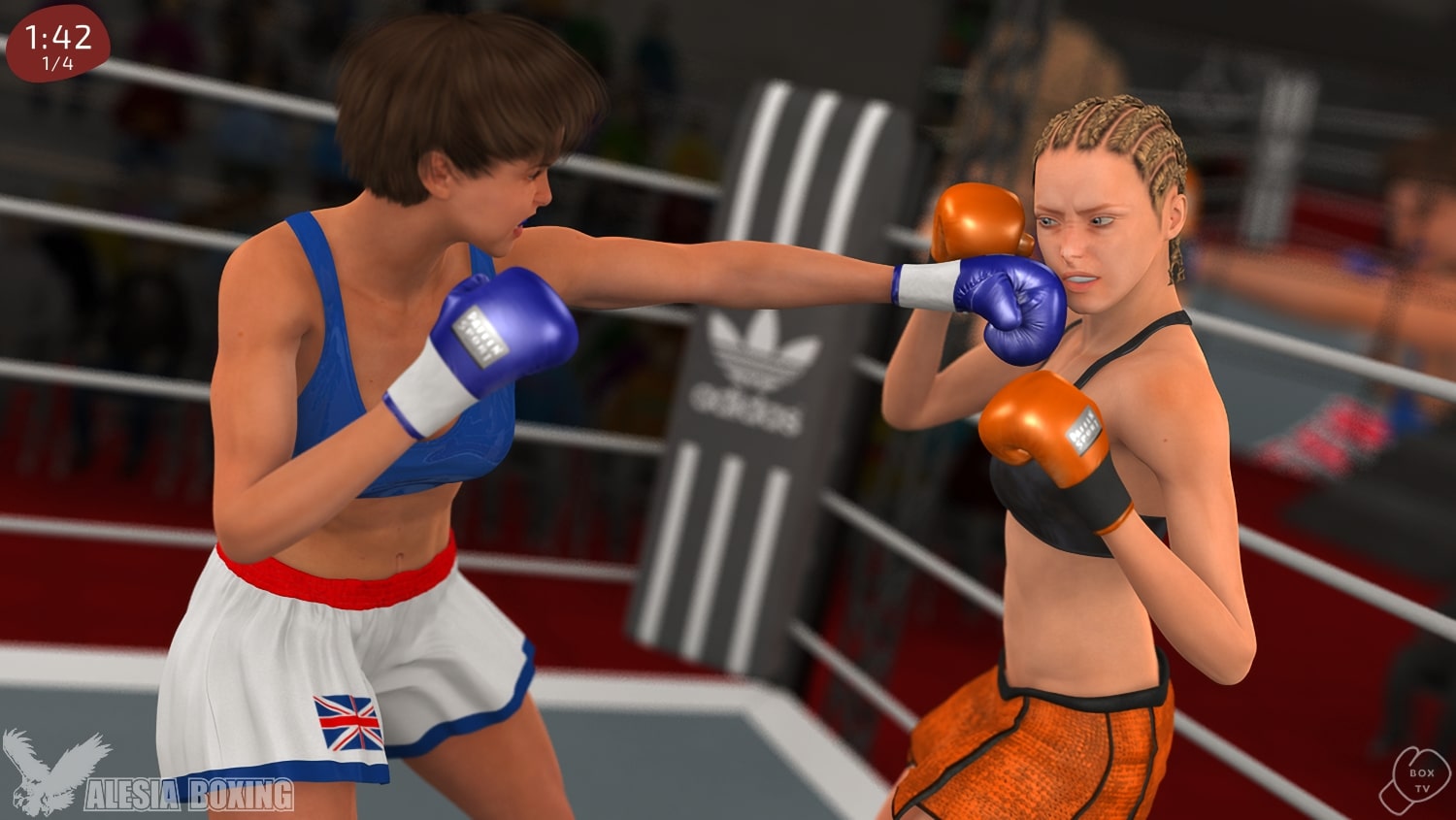 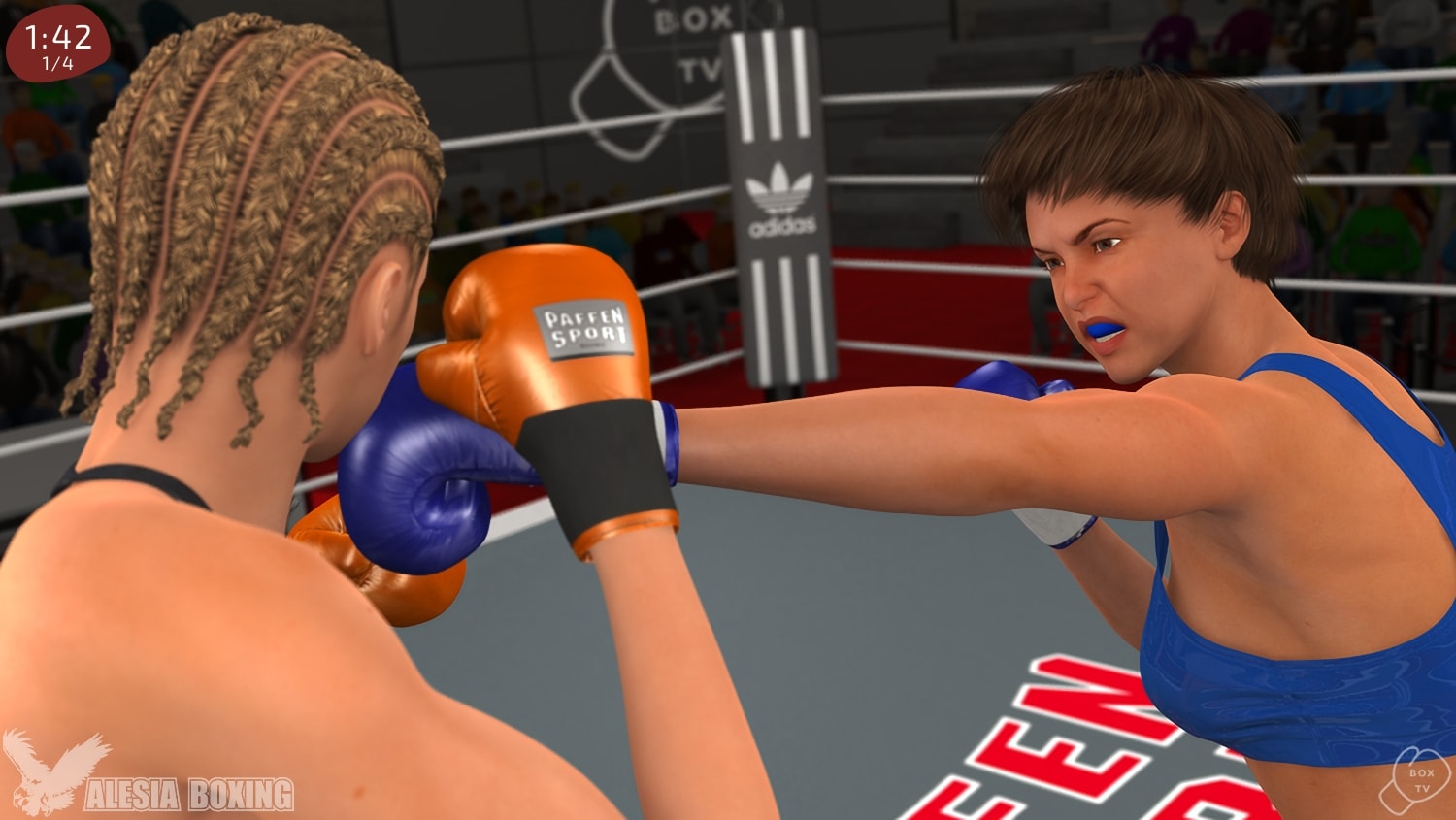 At the break, Regina tells Sophie that she did a good job slowing Nancy down, but that she must increase the work rate in the second round. Better tempo, a bit more power behind the punches, more combos. Working from angles instead of going for straight shots.

Picasso gets to work, and she paints convincingly. Everything starts with active footwork to play a game of diagonal movement and dynamism. The blonde’s positioning unsettles the brunette who can’t find a clean target to punch.

Sophie lets the blue gloves’ movement decide when and where she strikes. When her opponent breaks out of her guard to punch, an orange glove comes in to disturb plans and search for the target.

The highlight of the round happens in the second minute. Sophie throws a halfway jab that prompts Nancy to go for the overhand right. The German pulls her hand fast, leans to the left and comes in with a left hook inside. It collides with the British woman’s socket and temple. Sophie follows up with a clean right cross in the middle of her face. 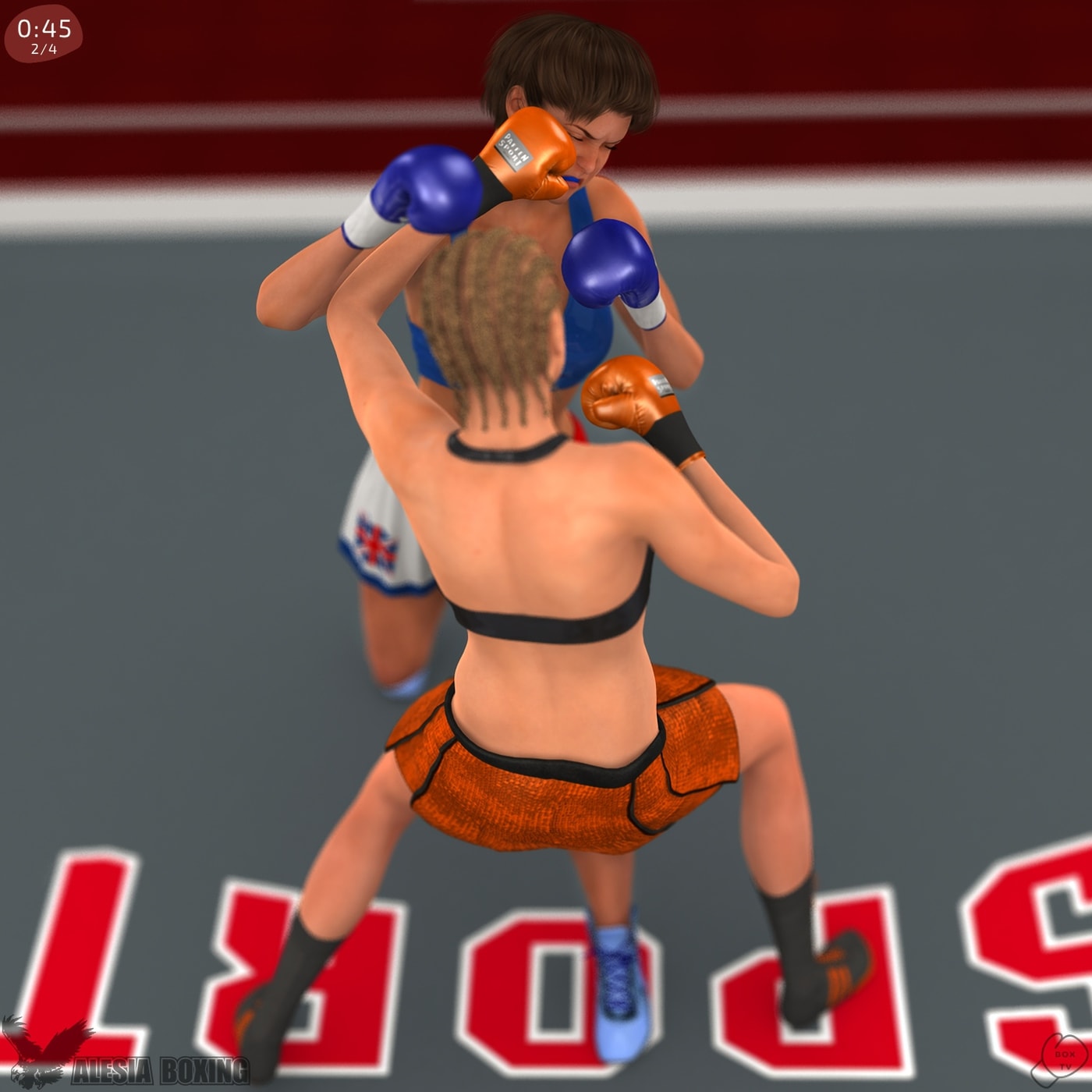 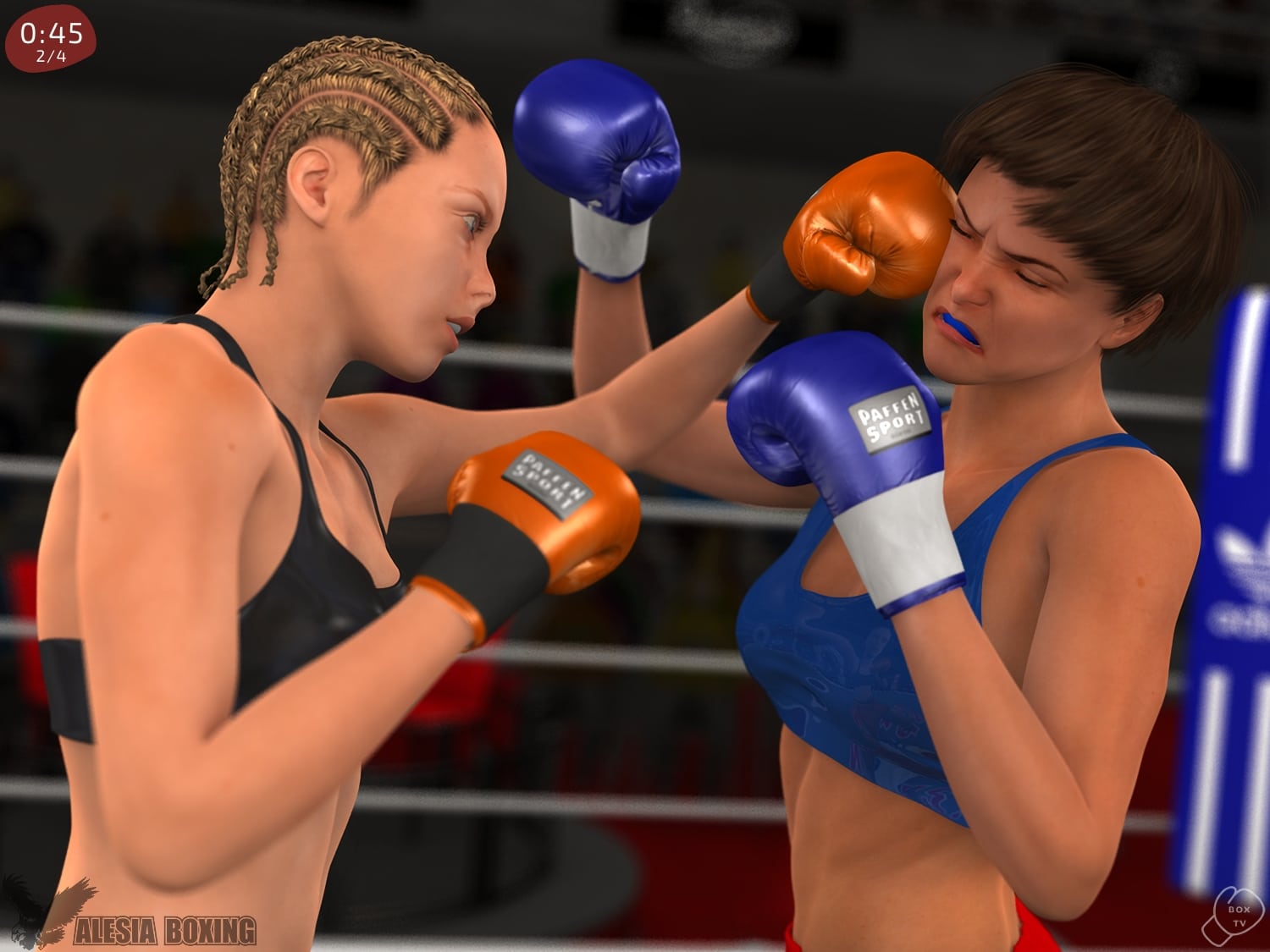 After the round, the fight seems under control.

Regina: “A fine job, my bitter orange. Remember that you shouldn’t be careless. You took a couple of shots that you could have avoided in this round. Nancy can still hit and all it takes is one well-thrown punch to turn a fight around. We don’t want that.”

Picasso, who is far more receptive to instructions by now, shows her flexibility in the next two minutes. She doesn’t just dominate in the punching department. She also puts on a display of methodical defending when Nancy throws punches with the intent to inflict pain. Accurate ducking and leaning deny the visitor the prize that is Sophie’s chin. She remains compact enough not to expose the body as she takes her head out of the way. 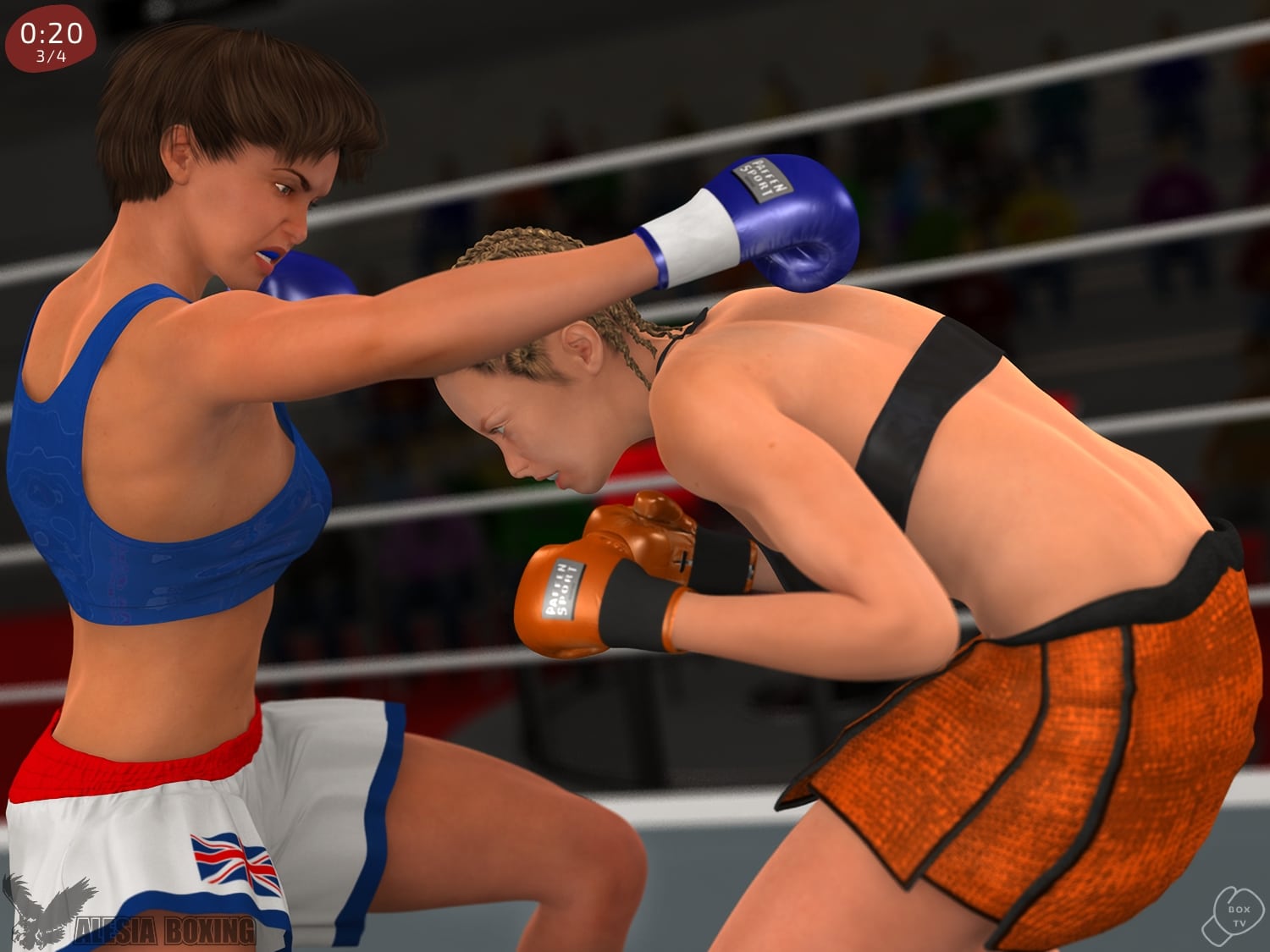 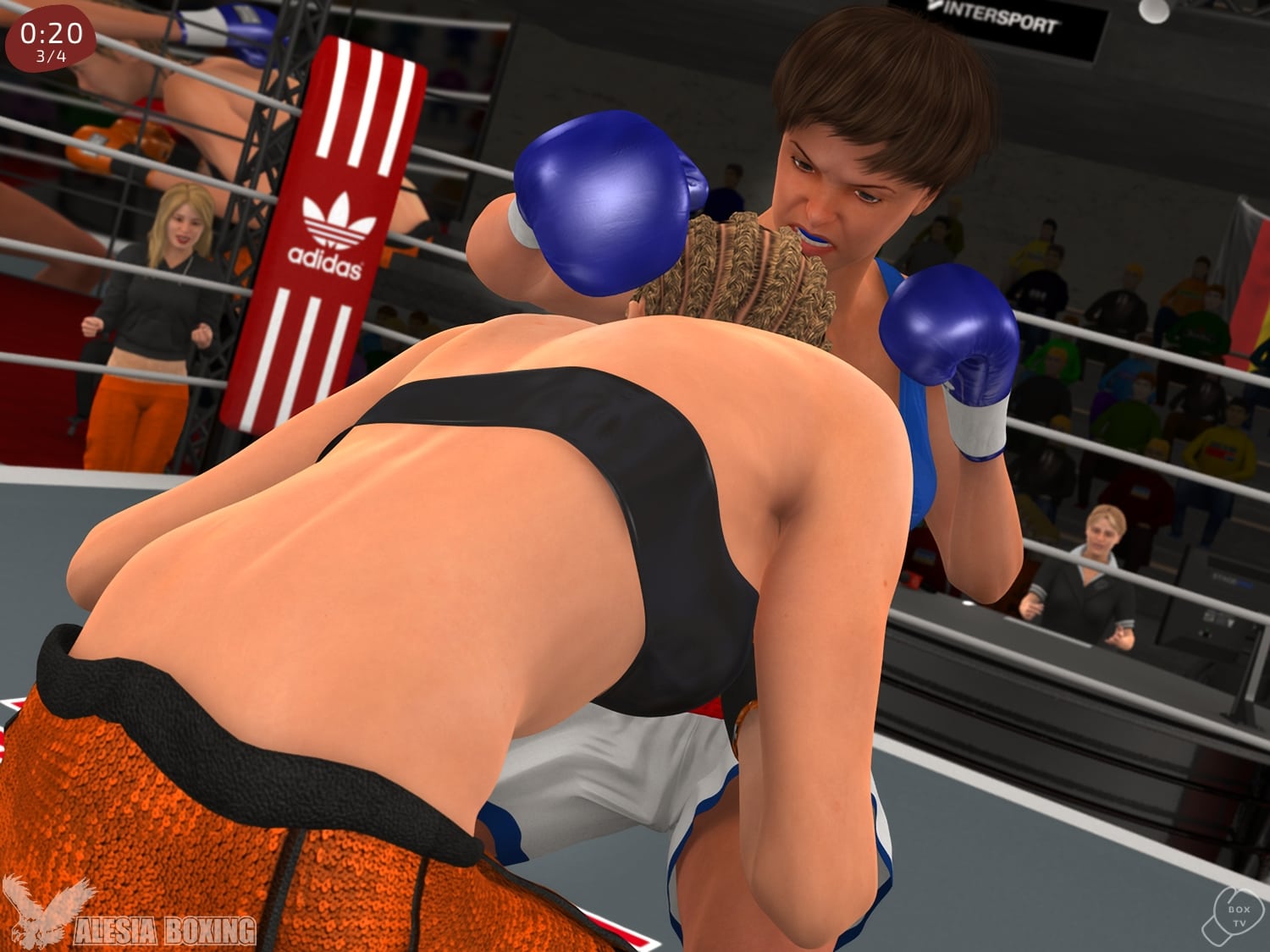 At the break, the German coach’s demeanor remains cool while expressing satisfaction.

Regina: “Good work, Picasso. I like it. Add a little spice to your punches. Only go for the knockout if you have a clear chance. Try to generate it through tactics.”

Sophie boxes with finely tuned skills in the final round, bringing out an unpredictable mix of fast feints and heavy power shots. As time flies, so does Nancy’s ability to deal with the pressure and increasingly punishing punches.

With just 20 seconds to go, Picasso feels like she knows exactly how her opponent moves, and that she can bag the win on the spot. She throws a low right cross as Nancy leans to the left. It’s only a decoy to force movement. As she withdraws the right hand, Sophie leans forward and launches a rocket of a left hook that connects on its way down.

The visitor is ready to go. All it takes is one more punch to perhaps send her flying through the ropes. 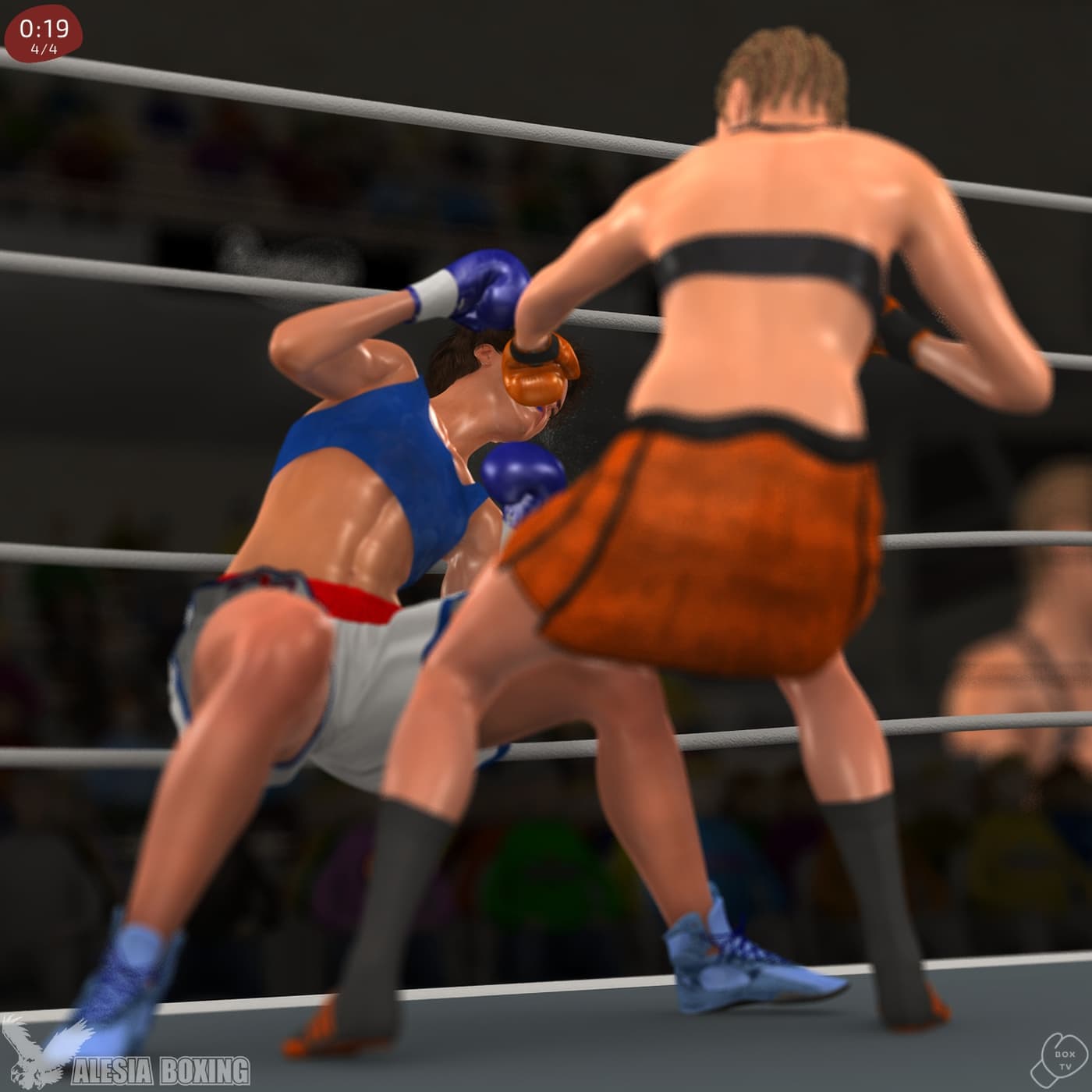 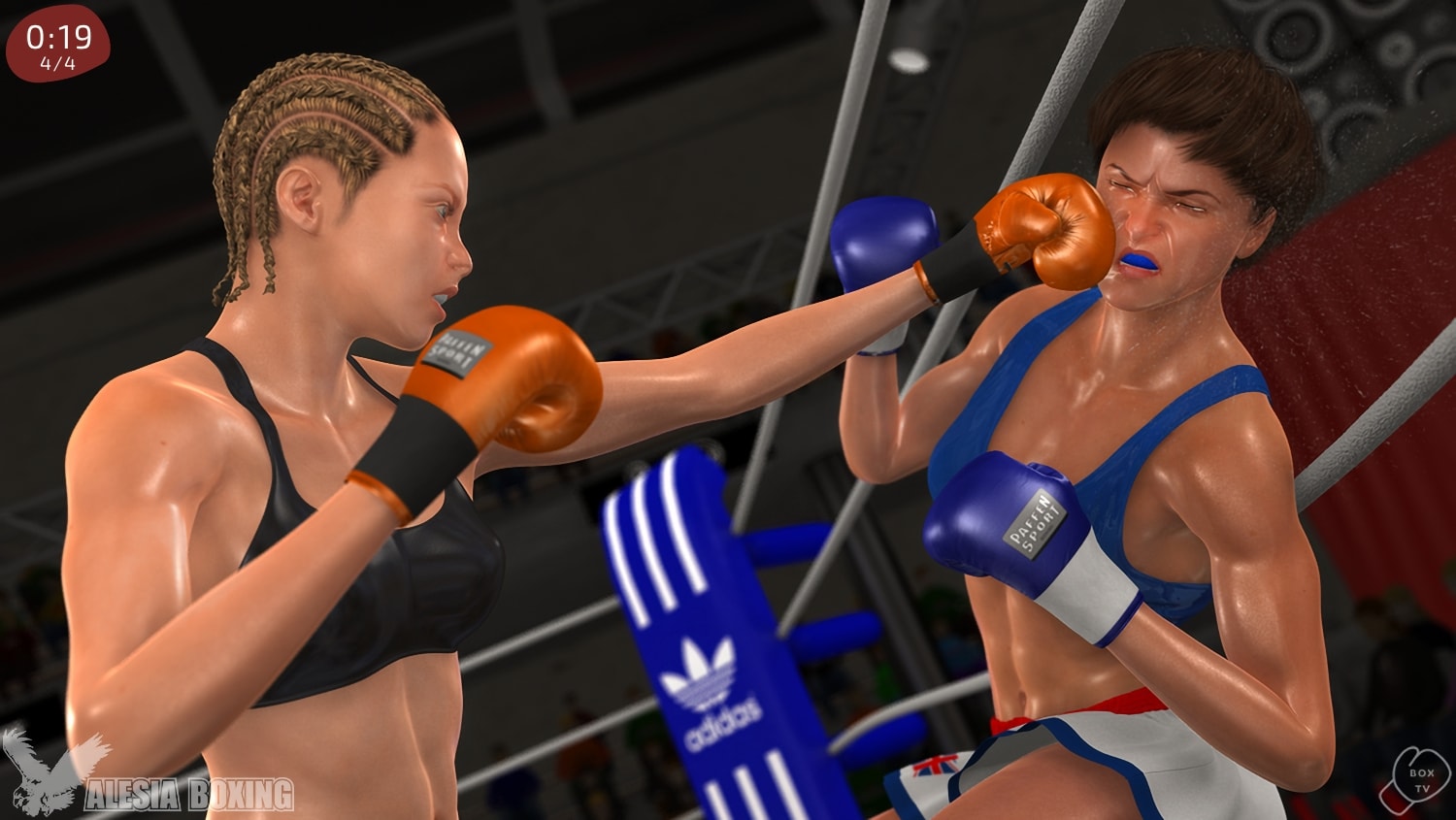 Luckily for Nancy, the best female referee in the world shares the ring with the two fighters. Rebecca Linden knows that the brunette is overmatched and that there’s no point in taking further punishment besides risking an injury. She steps in, stops the fight and awards the TKO.

The crowd in Hamburg cheers as the German prodigy celebrates her second pro win. She now is 2-0 and gaining the much-needed experience to convert her amateur greatness into professional success.

Still in pain, the visitor still has a clear enough head to reflect on what just happened.

Nancy thinks: “Oof. A left hook from hell masked by that right hand. The ref saved my ass there.” 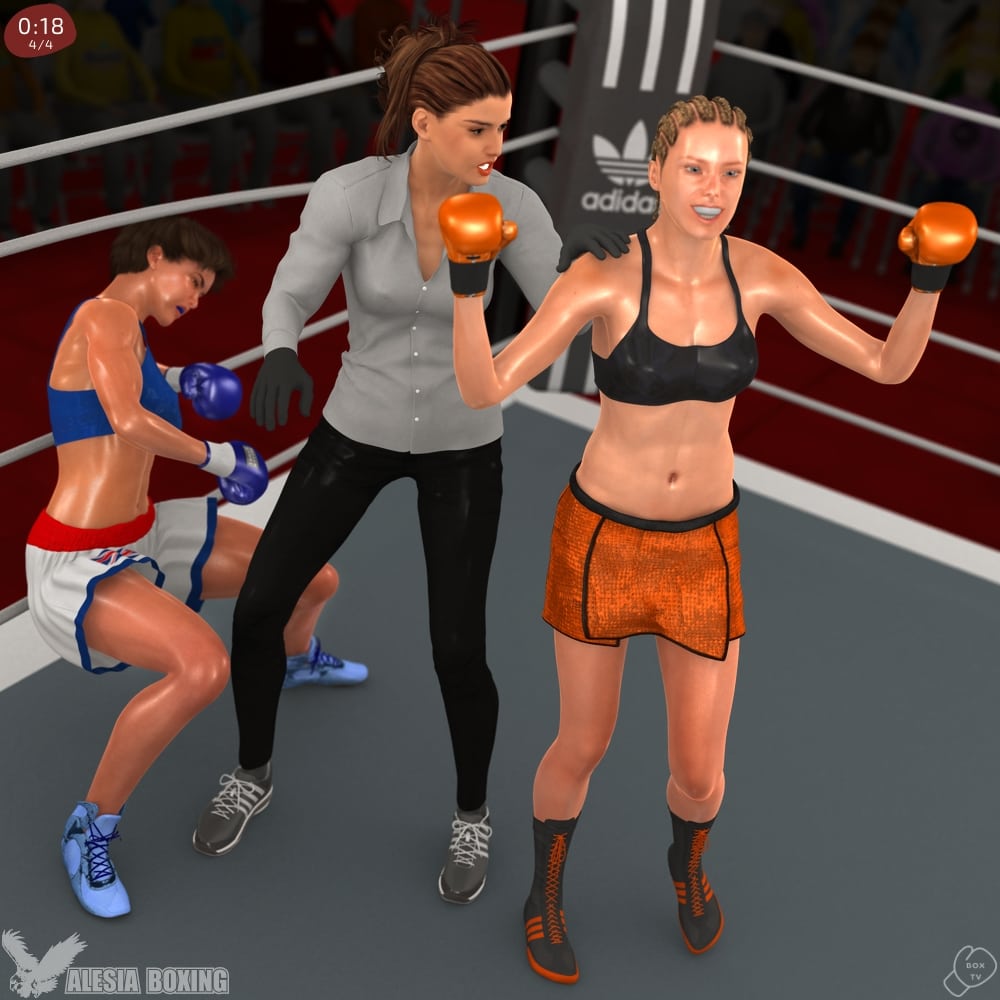 Ring announcer: “At 0:18 in the fourth and final round, we have a winner. By technical knockout, give a warm round of applause to this bitter orange who is undefeated with a record of 2-0! She’s Sophie ‘Picasso’ Schuuuuuummaaannnnnn!”

Sophie thinks: “Damn. So nice to get this kind of acclaim instead of the boos from my amateur days.”

Esther: “Sophie Schumann’s progress as a professional continues with a slick and composed performance. She ticked all the boxes tonight, with a great display of her growing maturity.” 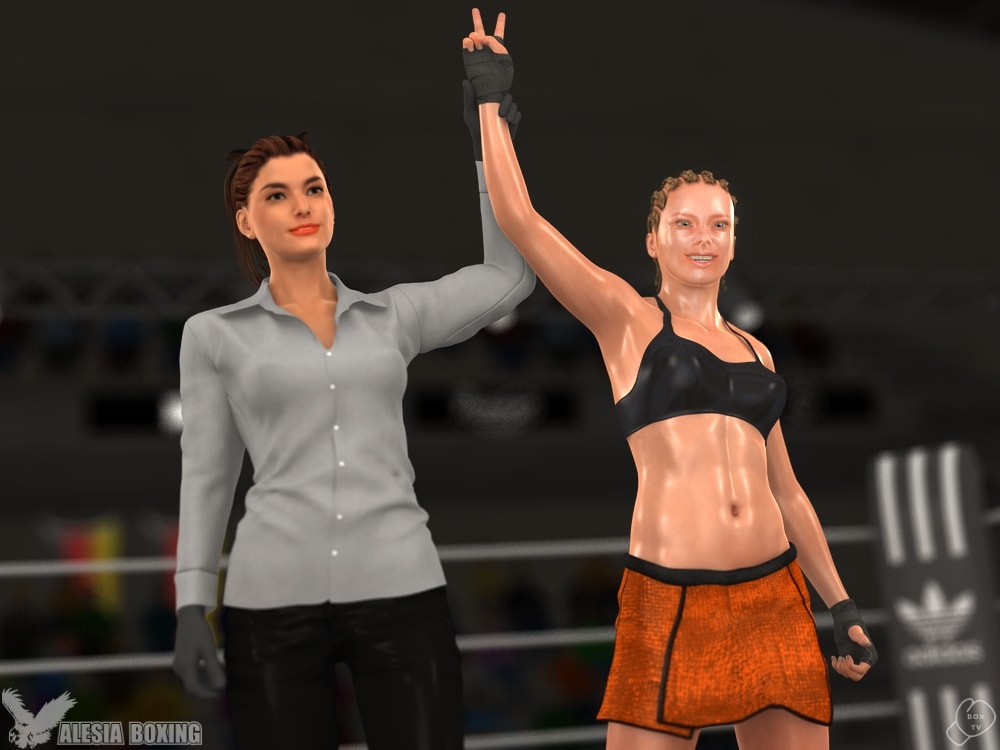 There is less fanfare about this second fight than the pro debut. The blonde must climb up the ladder, one fight at a time. Nevertheless, Sophie walks out to another round of applause before lovely greetings back in the dressing room.

The coach gives her a high five.

Regina: “Congrats, Picasso! You’ve boxed so well. So smart. I love it. My treat. What are we eating?”

Sophie: “I want a greasy döner!”

Then, she gets a big hug from her inseparable sister.

Alesia: “What Regina said. You were so good tonight. I love to see you win like that. So solid in there.”

Sophie: “Thanks! This wasn’t as spectacular as the fight with Clara, but it was fun.”

A quick shower and the German camp is ready to head out when the trio comes across Nancy in a corridor.

Nancy: “Yeah. That left hook hurt, but I’m fine. Thanks for the fight.”

Sophie: “No, thank you for the fight, Nancy. I’ll support you if you fight in Germany again.”

Nancy: “I think that will happen.”