It’s fight night in Hamburg, German boxing’s hotbed. Esther Schouten and Anna Schwartz are at the broadcast desk for Box TV for a German championship match in the Lightweight division.

This bout was mandated by the boxing federation as the Lightweight belt became vacant late last year.

The challenger gets introduced first, fighting out of the blue corner. Lara Dietrich, aged 26, is the number two challenger in the division. The Freiburg native a bit of a latecomer to the game who didn’t have an amateur career. However, her 8 wins, no loss record has made quite the impression.

Esther: “Dietrich has no knockout on record but she has been pretty solid in every ring appearance so far. Using height and long range to outbox her opponents, usually with ease.”

Anna: “That’s right. Her moves are slightly robotic, but she has a good sense of positioning and an uncanny ability to release punches before her goes get within range. The challenge for her opponent will be to make it a scrap.”

Across the ring, in the red corner, is Michaela Sommer. Hailing from Bremen, she is 25 years old and an unusual animal in boxing due to her appearance. She is chubbier than most professional boxers, making her generally underrated despite a scintillating 23-2 amateur career. She now is 9-1 as a professional, with all her wins coming by way of knockout.

Esther: “Sommer may not be lean, but she is a mean machine. She employs the power game throughout a fight, getting inside, hitting hard from a short range. She loves pushing and serving uppercuts from both hands. Few people enjoy that treatment.”

Anna: “She comes in as the favourite in this fight not only due to her amateur credentials, but also due to physical strength and power shots that have reduced opponents to ashes. There’s power in those pink gloves. Her only loss was a controversial decision that everyone at ringside felt she had won.” 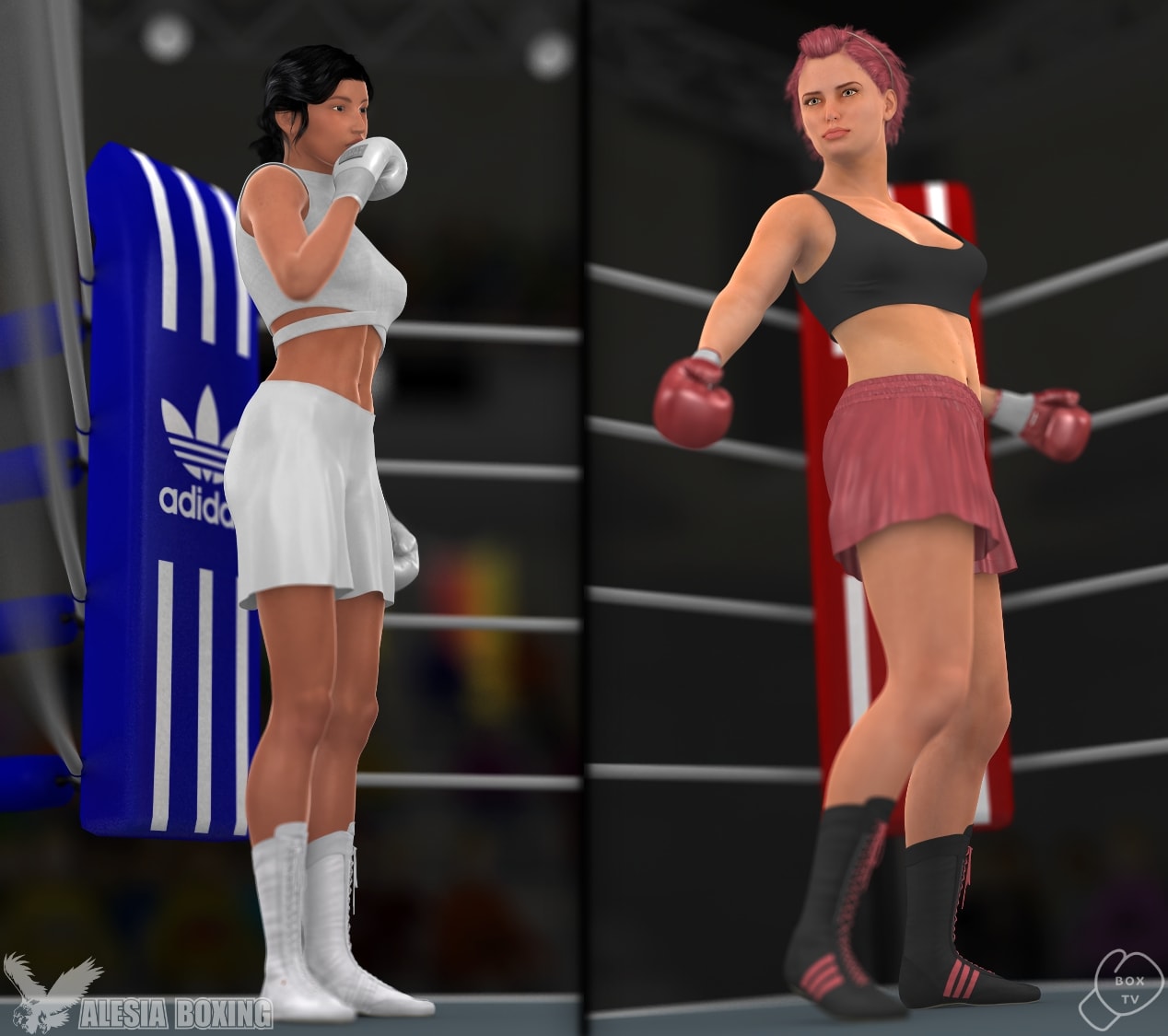 The contestants get to the middle of the ring, hear instructions from referee Rebecca Linden and touch gloves. They are tense but respectful. Moments later, they get back to their corners, the bell rings and the fight commences.

The first round starts with a long feeling out process. The boxers don’t want to give away too much in regard to their tactics, so they trade light shots, move around and study each other.

The number one contender applies light pressure in the second minute to get in midrange and throw shots. Just close enough for her short arms to put some leather in Lara’s face and deny her the chance to find her full reach. A bit quicker, the girl from the North scores with a few clean shots. Her pink gloves make a nice crisp pish sounds as she paffs her opponent to take the round. 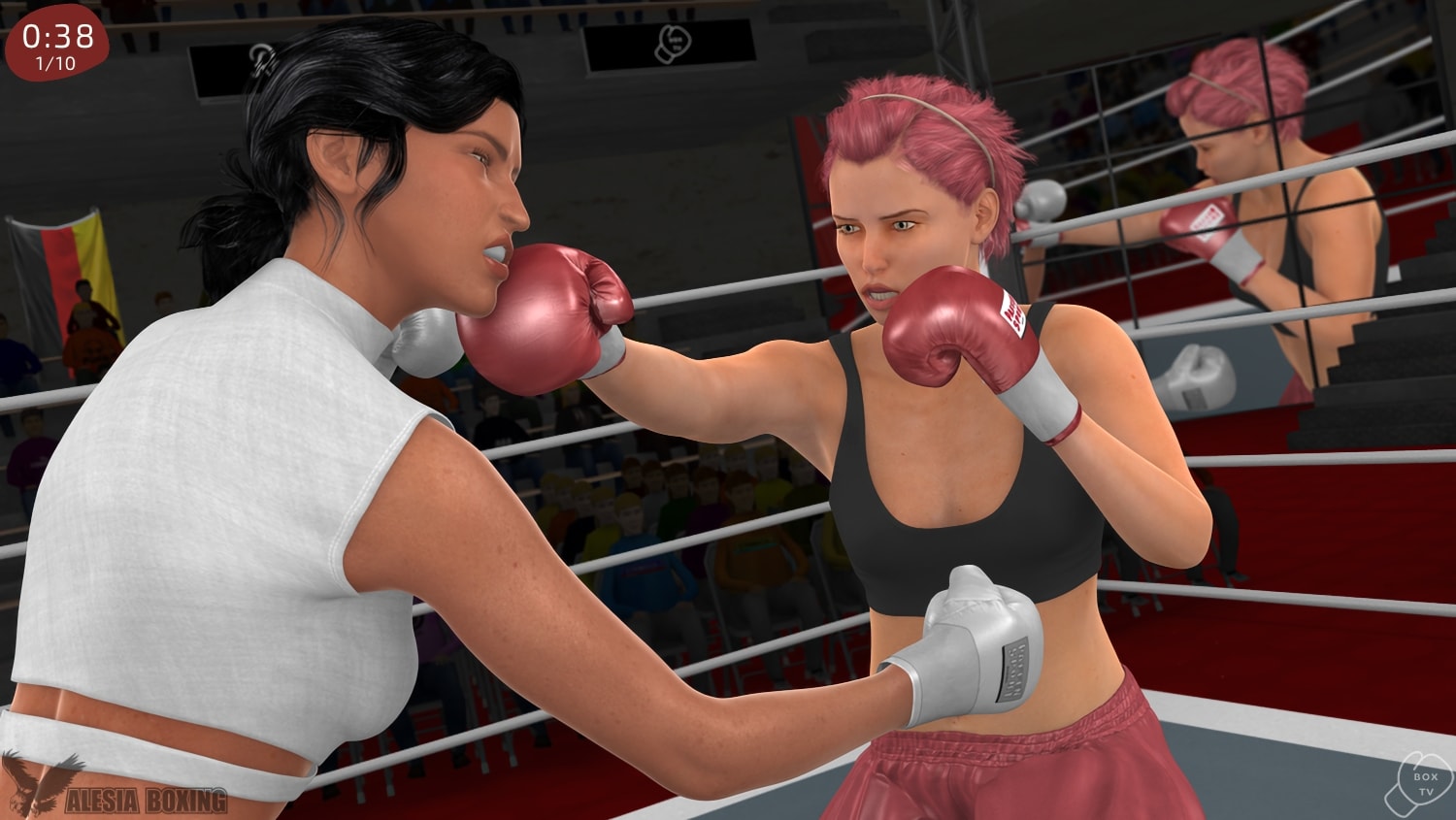 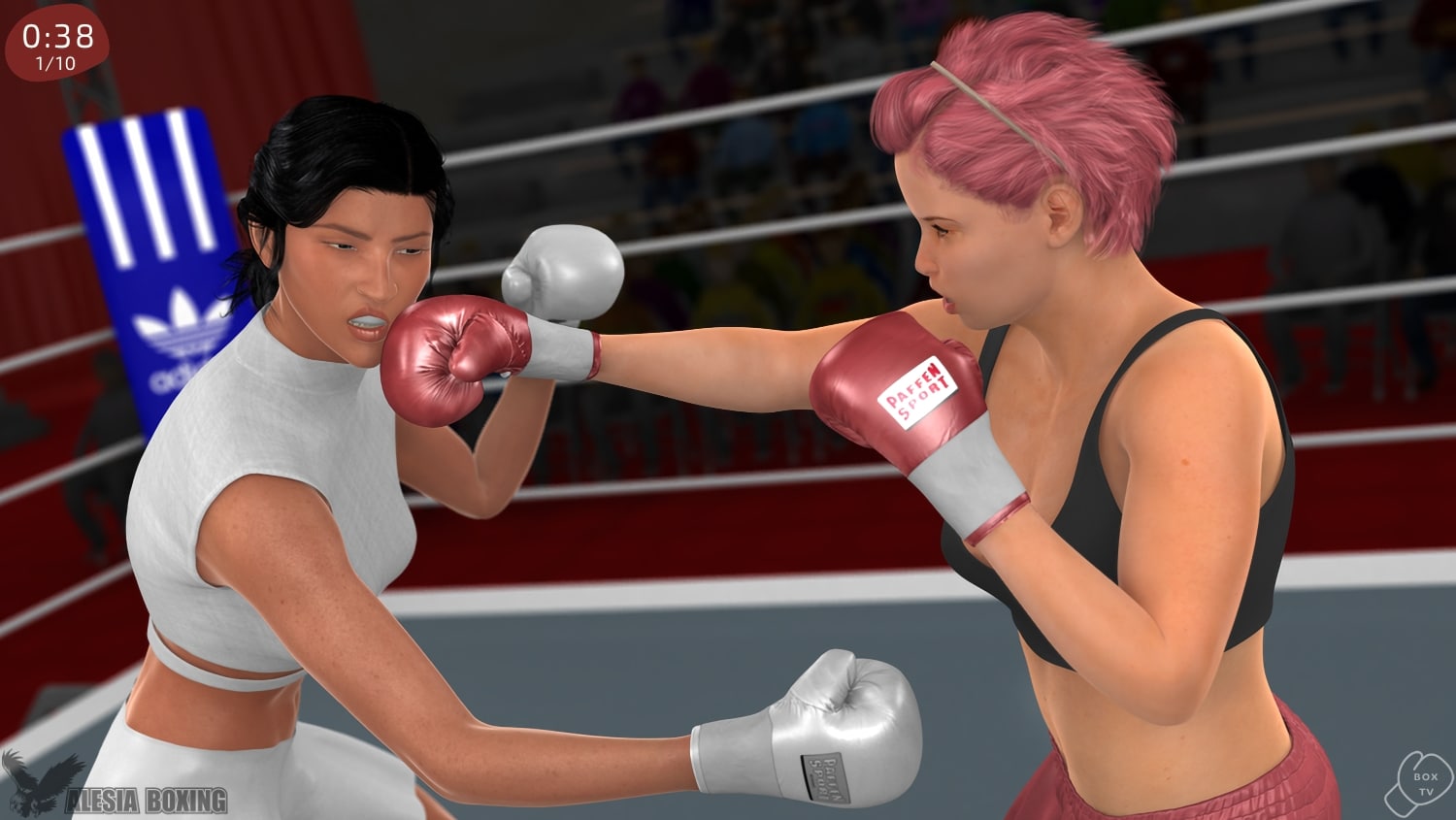 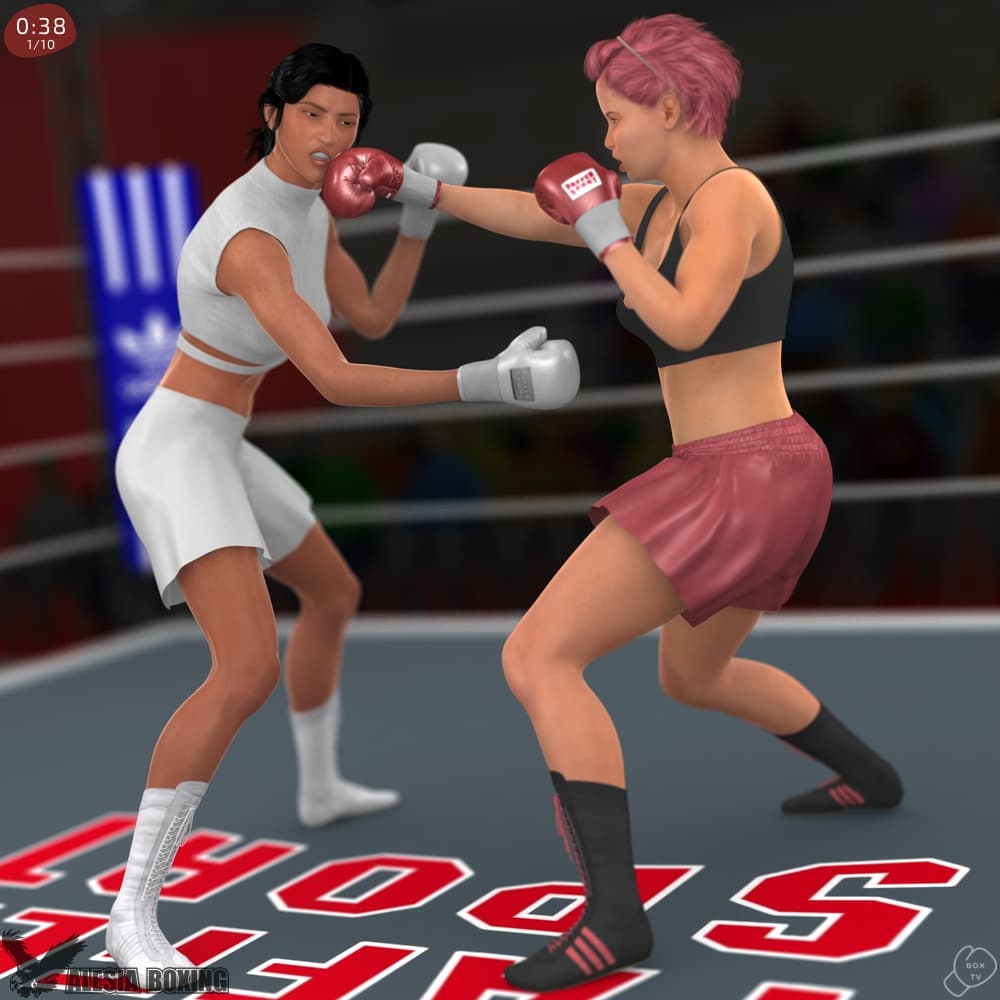 There’s more trading in the second period. Michaela becomes more aggressive in order to get closer to her opponent, who is anything but comfortable in proximity.

The best moment for the Bremen native comes at 1:13, when she fakes a right hook to the body. Lara lowers her elbow to block, but Michaela makes an abrupt change to slip a left hook aimed at the liver. The hard power shot on target makes the number two grunt. Luckily for her, it missed the “sweet spot” for the liver by very little. 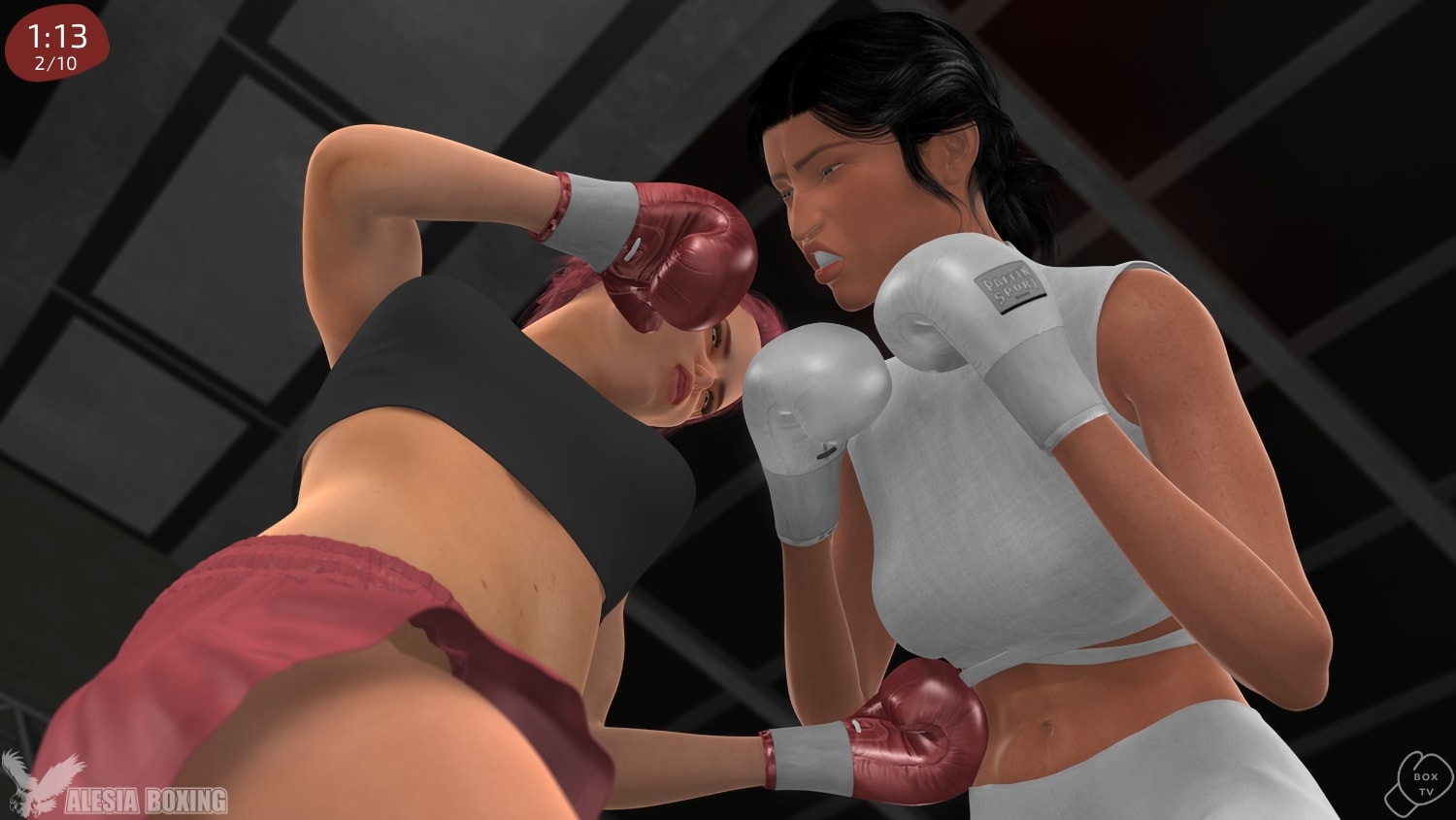 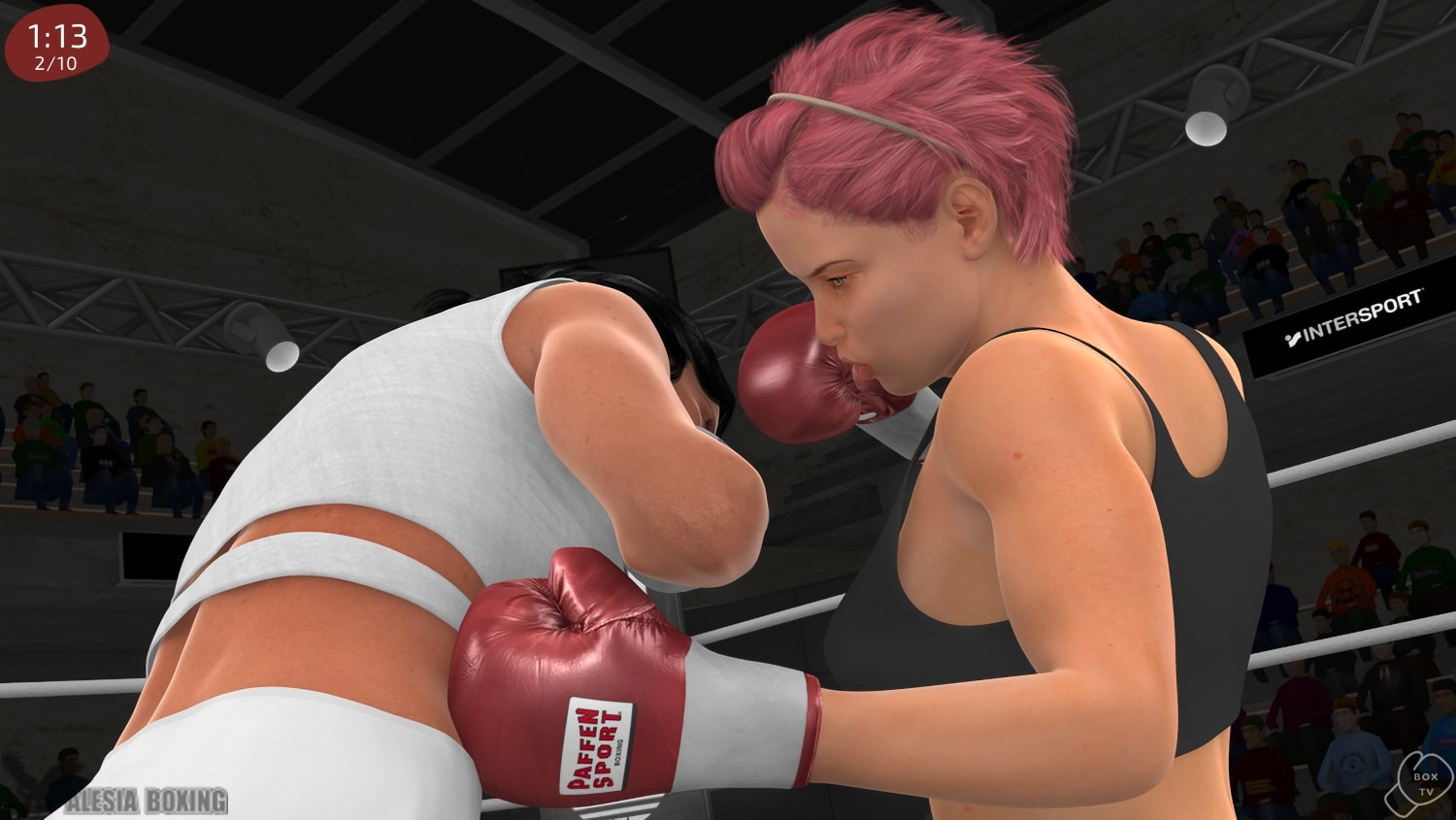 This action makes Lara pull back and throw many jabs to keep the opponent at range. With a little more time to reflect, the white-clad woman from the South unleashes straight punches that connect nicely. Pish! Paff! Pish!

Lara baits the left to the body by lifting her right elbow. When the pink-haired girl throws, she changes the angle to send a sweeping bolo punch that makes Michaela’s head lift up and turn right. Pish!

The back and forth continues until the bell, with the underdog giving a good account of herself.

Esther: “This round was very close, and it’s anybody’s game since both made clever moves.”

Anna: “I have it 10-10, making the total 20-19 in favour of Sommer who is as lively as a spring chicken. It’s a narrow lead that can easily be cancelled. I believe we have yet to see the best out of these two fighters, who are getting into the match progressively.” 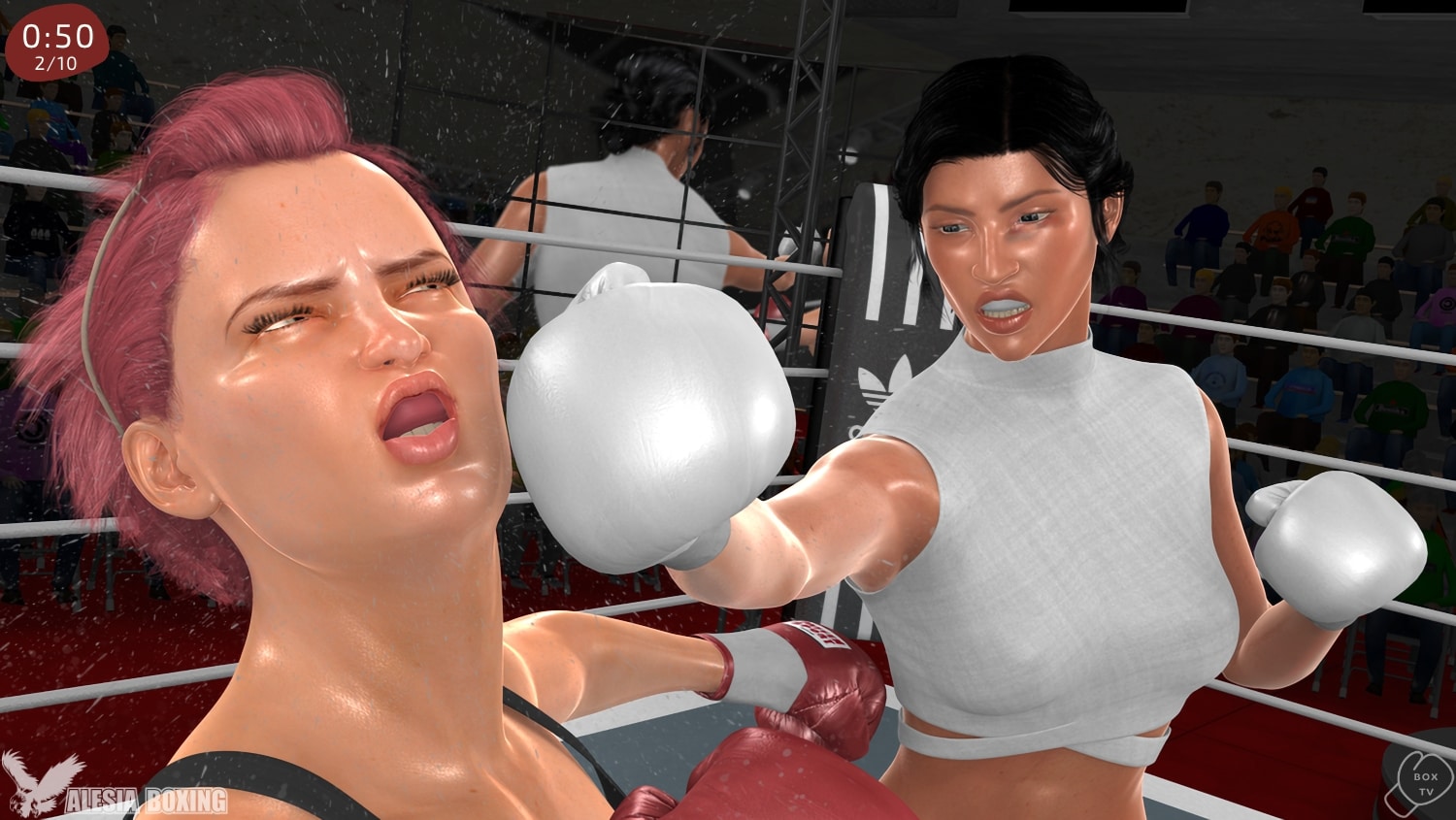 Round 3 turns out to be wildly different. Michaela charges with energy to leave no breathing space whatsoever to Lara. She gets in, presses her powerful upper body against the brunette’s and supports it with her equally strong legs. Once she plants her feet on the ground, the opposition is forced back by her body mass and overwhelming strength.

The tactic works beautifully for Michaela, who takes Lara’s arms out of the game with power moves, before delivering hard knocks inside. Many of them uppercuts in the middle to bang Lara’s chin, jaw, mouth and nose. It turns into a pink glove festival. 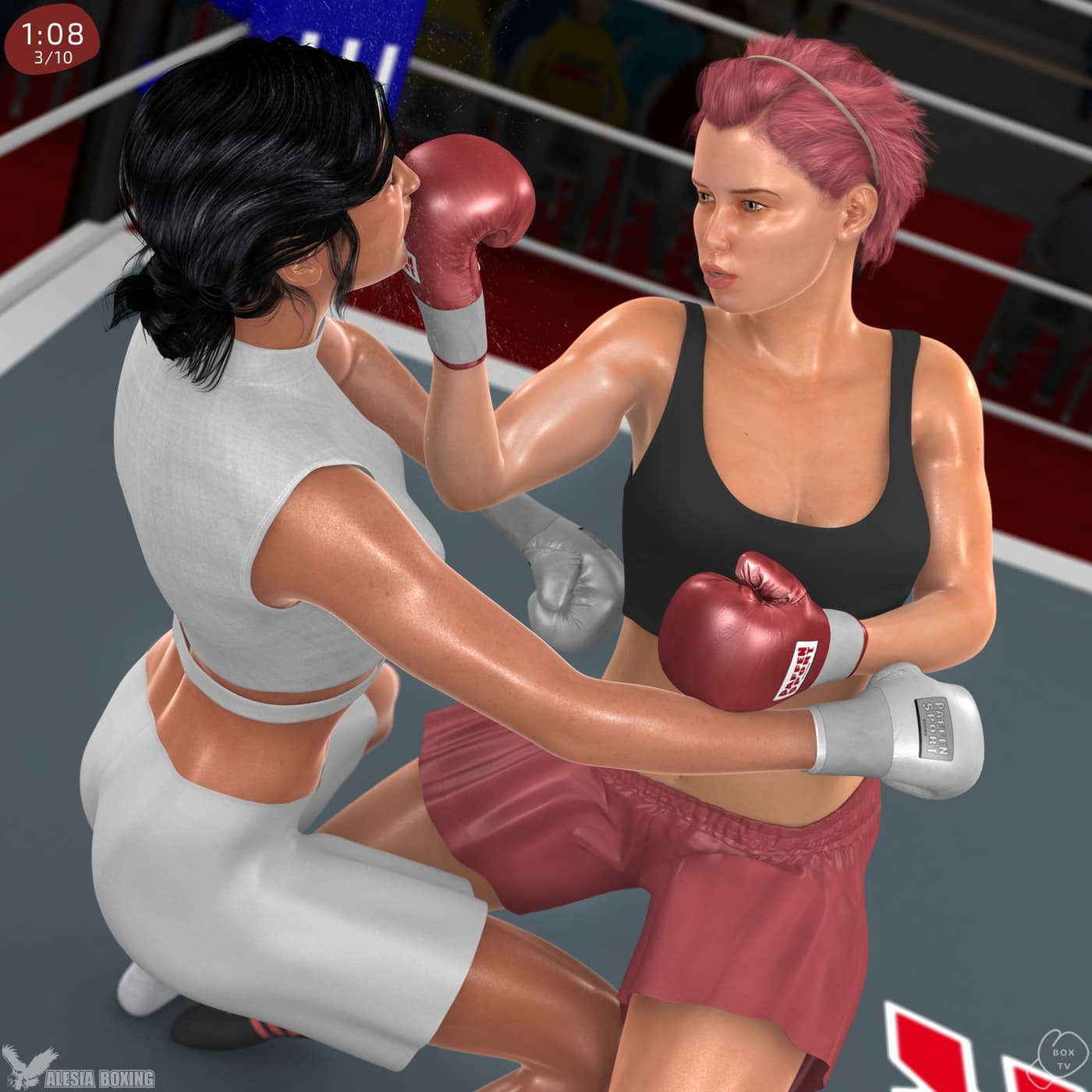 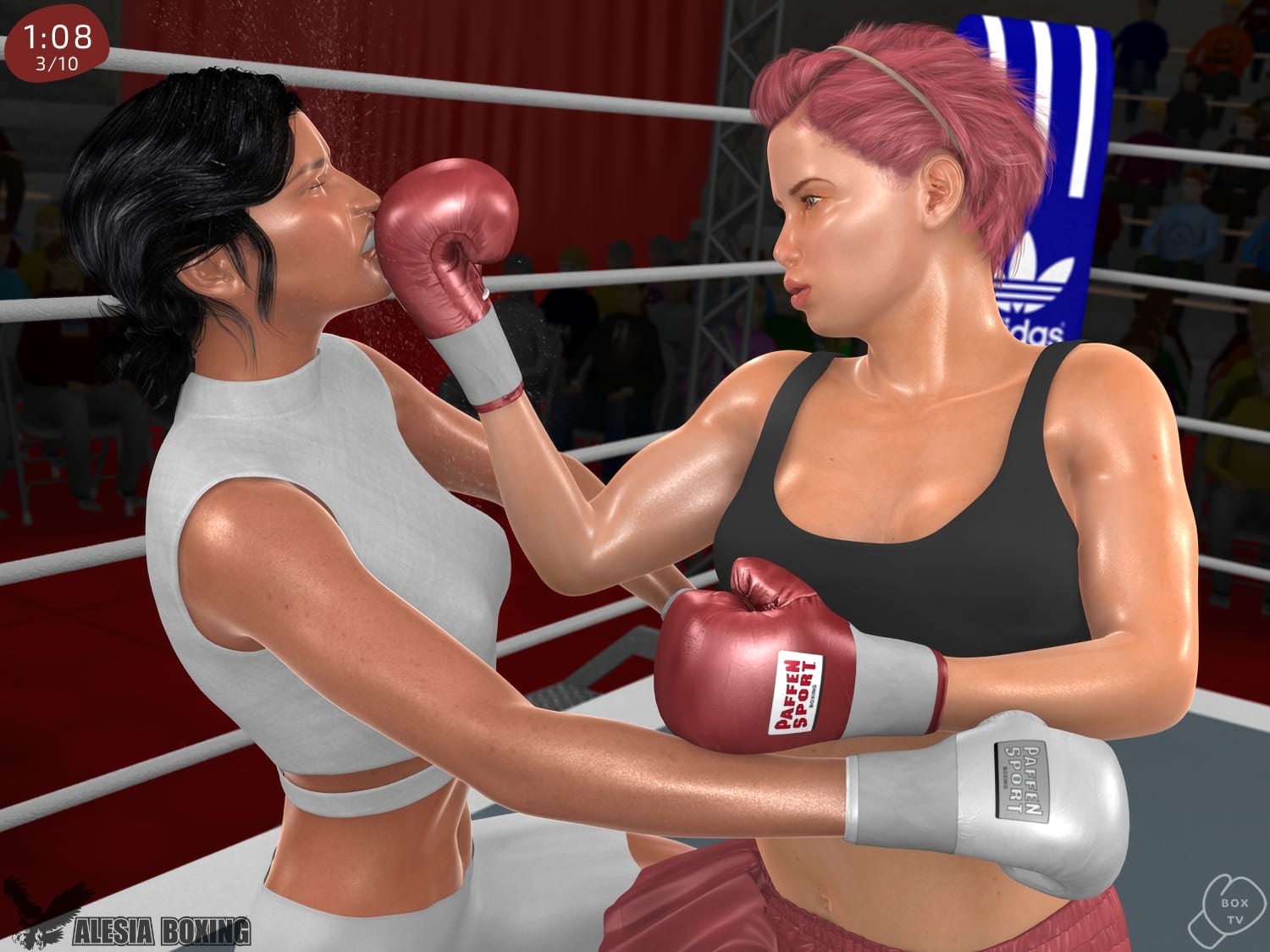 Michaela is in full control in Round 4, throwing power punches from a variety of angles. Lara is bottled up before she can make good use of her long arms, and she gets punished badly.

The end comes with 18 seconds left, when the referee is already close to stepping in. Lara thinks that she has time to take the body and intends to throw a right hook to the ribs, but she gets beaten to the punch. Her opponent winds back and twists her upper body for a forceful left hand from underneath. The pink glove connects with her lower jaw and the right side of her chin, for a massive hit.

The crowd is wowed by the blow, which makes Lara bend over in pain. 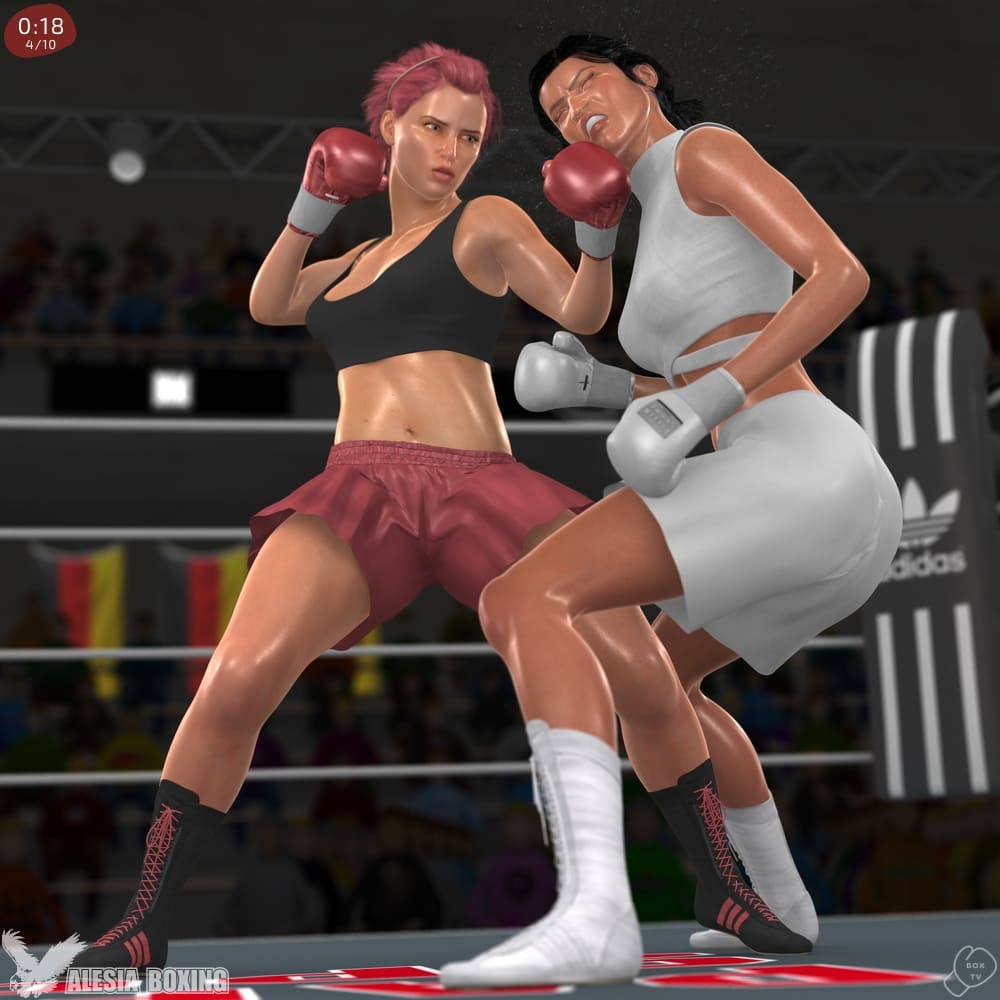 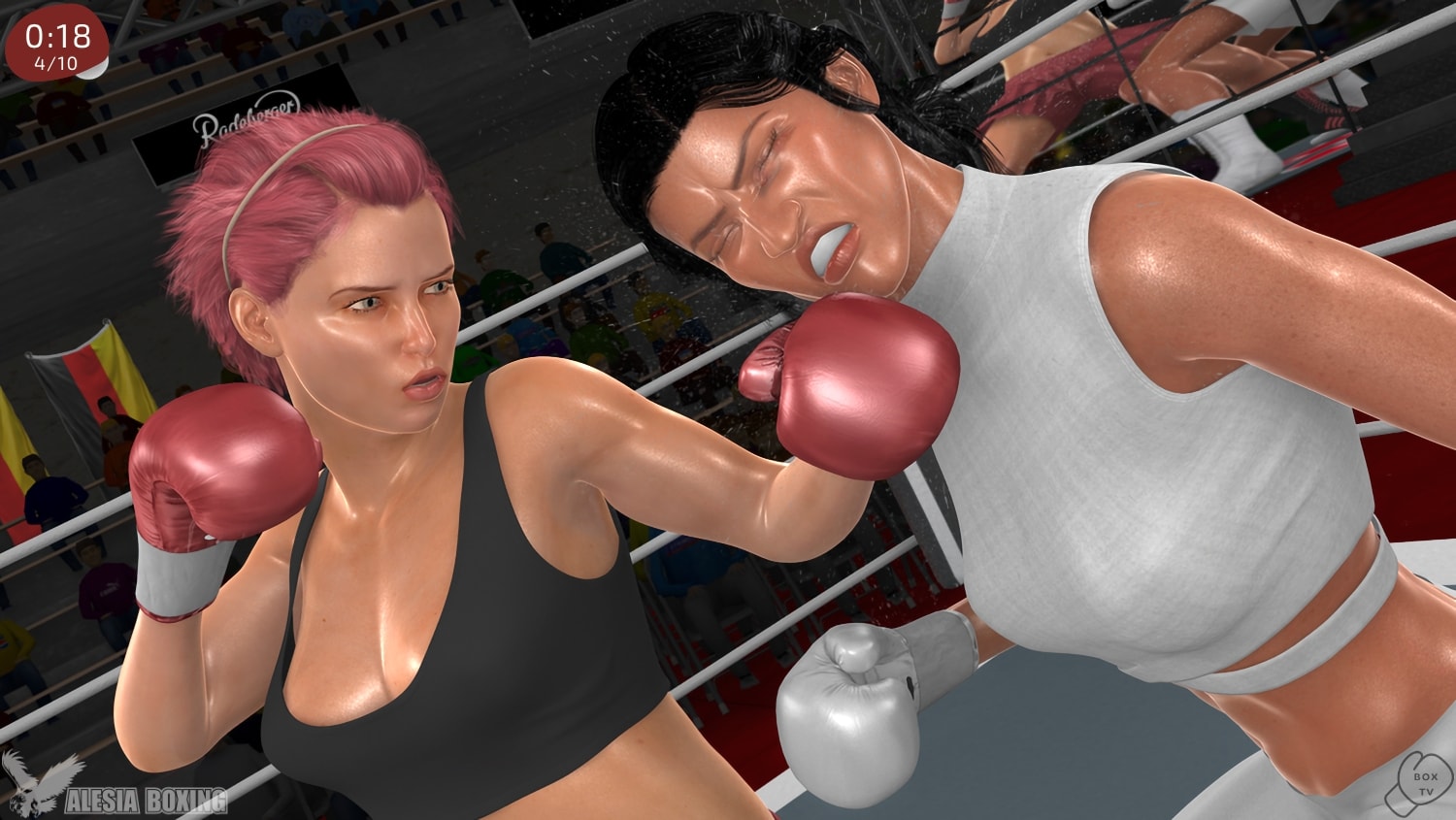 Rebecca Linden takes a couple of steps forward to put herself between the two boxers.

The crowd cheers for the Northern girl. A champion is born.

Esther: “Linden intervenes for a stoppage at the right time in a championship fight once again. Sommer gets a well-deserved title belt while Dietrich is spared unnecessary punishment. Put another star in the official’s stellar record.”

Anna: “Dietrich has been outclassed and rendered unable to defend herself by her opponent’s power game. It’s a nice performance from the new champion, who believes that you should keep your friends close and your enemies closer.” 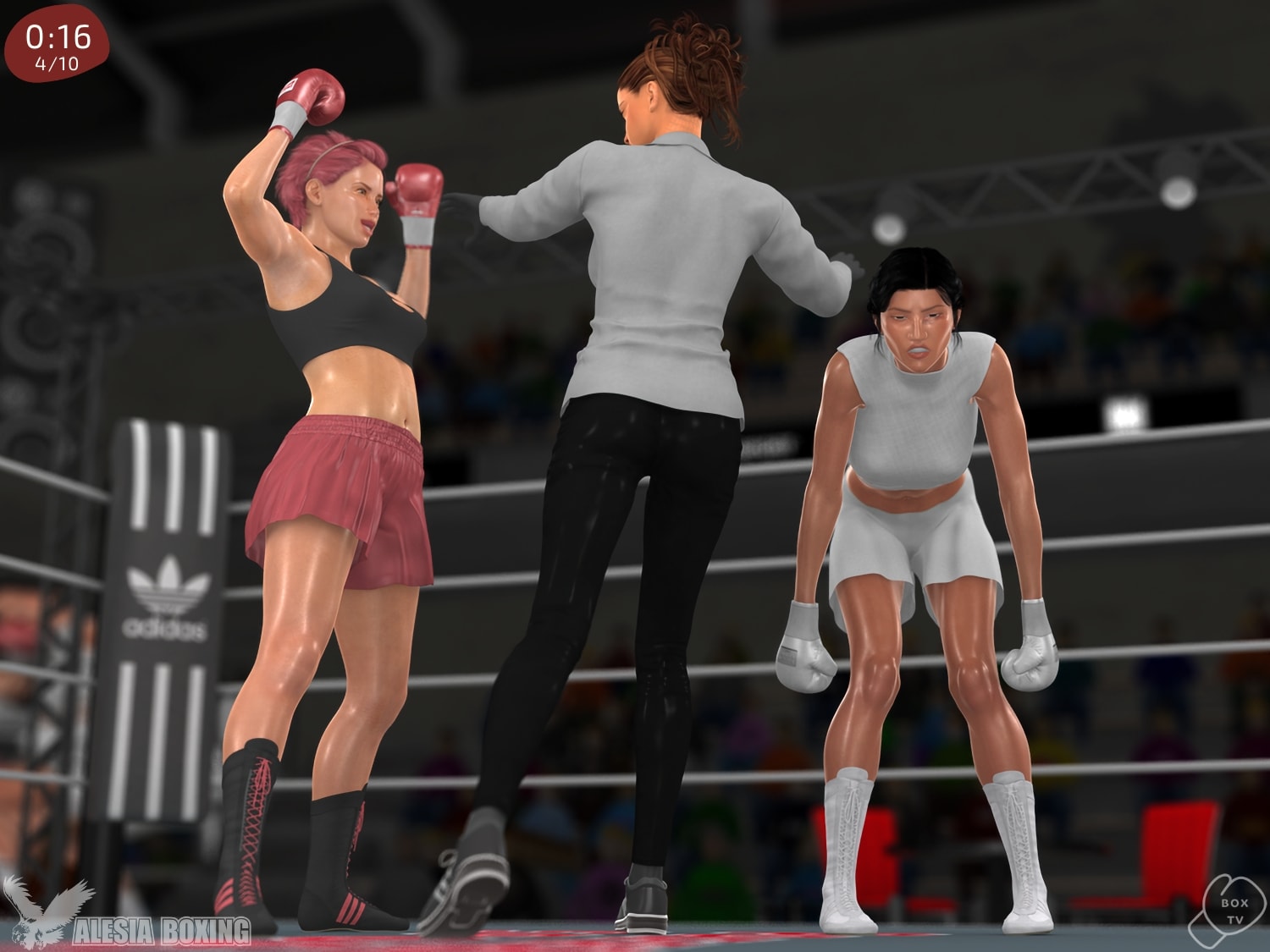 Ring announcer: “At 0:16 in Round 4, we have a winner. She is the NEW German Lightweight champion… by technical knockout… Michaela Sommer!”

Now 10-1, the champ celebrates the best night of her career with her coach and fans. She may not have a six-pack of abs, but she makes up for lack of definition with brute force. 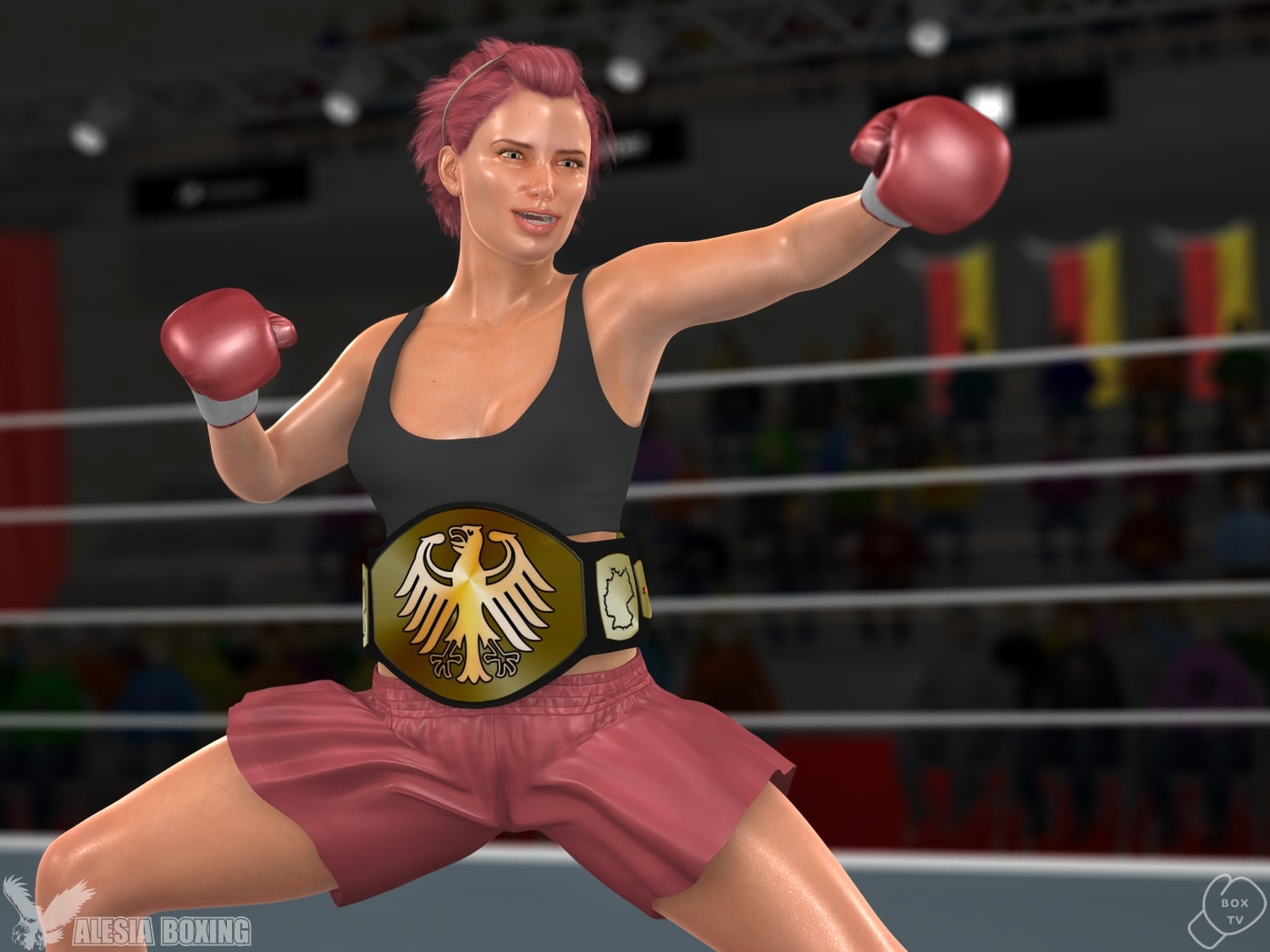 The German Featherweight champion is a tough inside fighter, with size, who punches above her weight.
Profile
Support us
Characters and brands owned by us unless credited otherwise. Real-life elements used only for artistic purposes. You are NOT authorised to make derivatives. Icons credit: Font Awesome.
RSS Twitter Contact PRIVACY POLICY
2022, Alesia Schumann, AlexBoxer