It’s showtime in Berlin, in the undercard of a run-of-the-mill fight night organised by DE Box-Promotion. Astrid Olsson has her German debut against Melina Kaplan in the Lightweight division.

The Swede goes into this one with a 7-4 record and something to prove. Kaplan, who hails from Hannover, has a 6-8 record. She did score wins in the past, but she has also lost her bouts against talented boxers.

The Swedish Sweetheart is a little antsy in the dressing room.

Astrid: “I’m nervous. First fight in Germany, and I got knocked out the last time I fought.”

Maxim: “There is nothing to worry about. Melina is tailor-made for you, and beatable.”

Astrid: “I know, but I thought I had Emma. You never know what happens with the under-rated ones who are thrown at you this way.”

Maxim grins: “You haven’t dealt with DE Box-Promotion before, right? They’re the gold standard in boxing, with the best scouts. I want you to go out there and enjoy yourself.”

Astrid smirks: “You’ll see a lot of leather flying then!”

Action gets underway with referee Alex Spindler at the helm, without television. Simply a packed arena with German fans who are treated to regular shows across the country. The first 20-25 seconds are tentative with customary jabs, range finding and footwork.

An antsy Astrid forces the issue shortly thereafter with heavy combinations. Her coming forward and bursting with activity makes Melina step back and cover up after taking a couple of hard shots. The blue gloves hit purple ones with six unanswered punches, and then a strong right cross slips down the pipe to connect with the opponent’s chin. 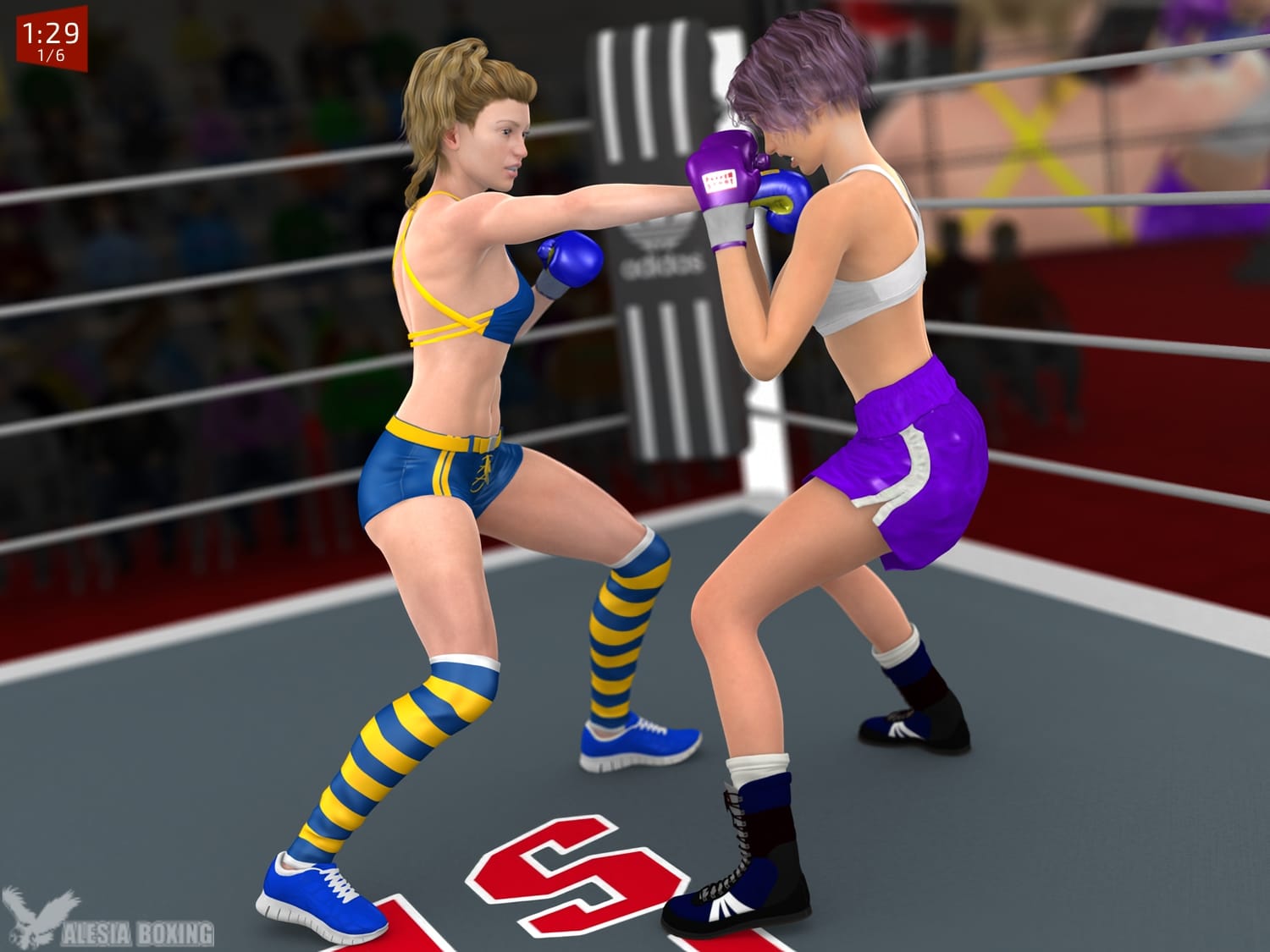 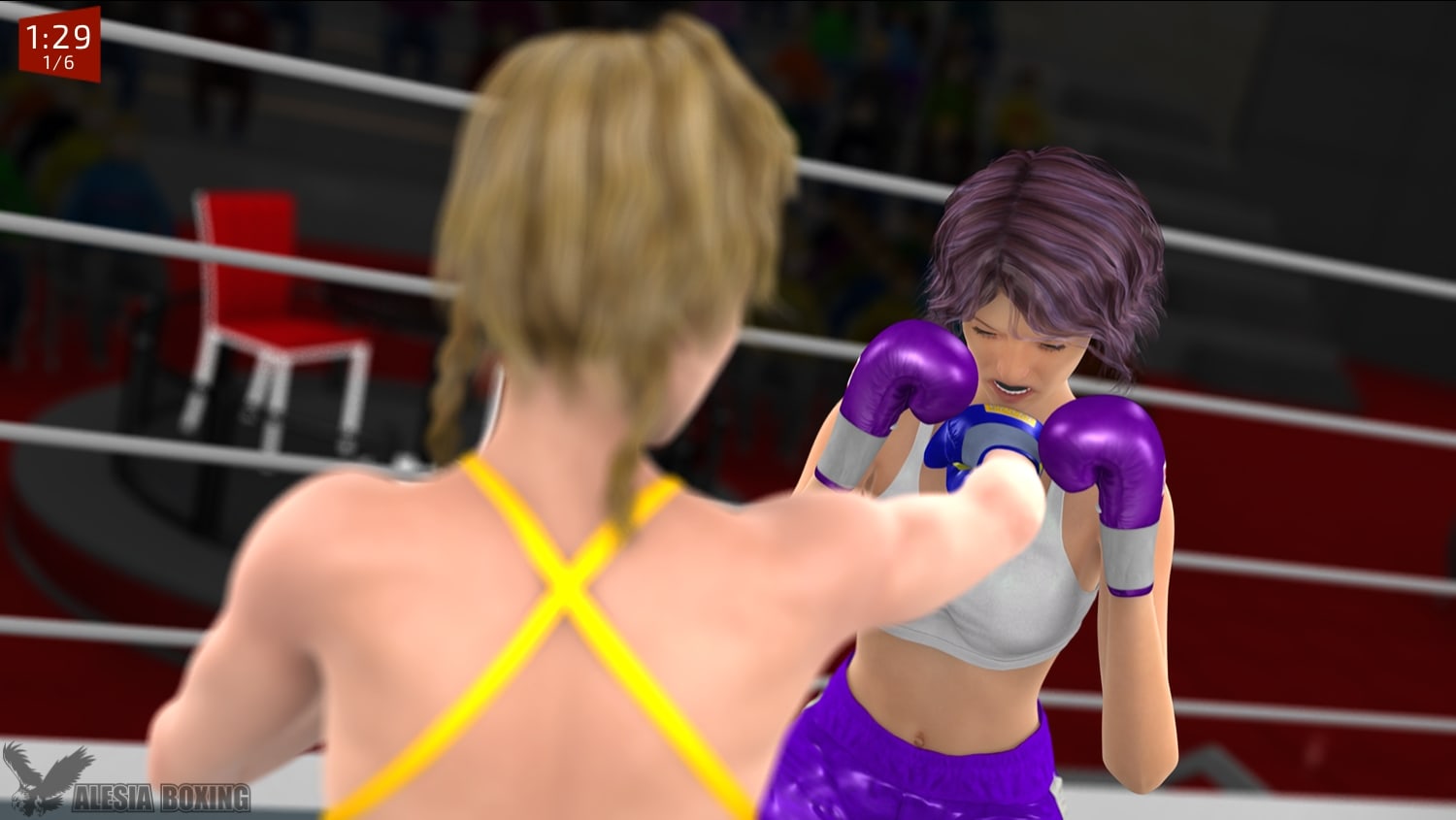 That solid power shot carries a message: the Swedish Sweetheart has all the strength needed to hurt the North German girl. Both of them know it now.

It doesn’t take more for the blonde to swarm as she loves it. She bullies Melina in the ring, advancing and throwing bombs that the opposition can hardly avoid.

The highlight of the round happens with 18 seconds left in the first engagement. Melina opens up to throw a right hook from a distance and Astrid moves in with a sweeping left hook that bangs the chin. PISH.

The crowd cheers. It loves the Swede’s fearless attacking and entertaining style. 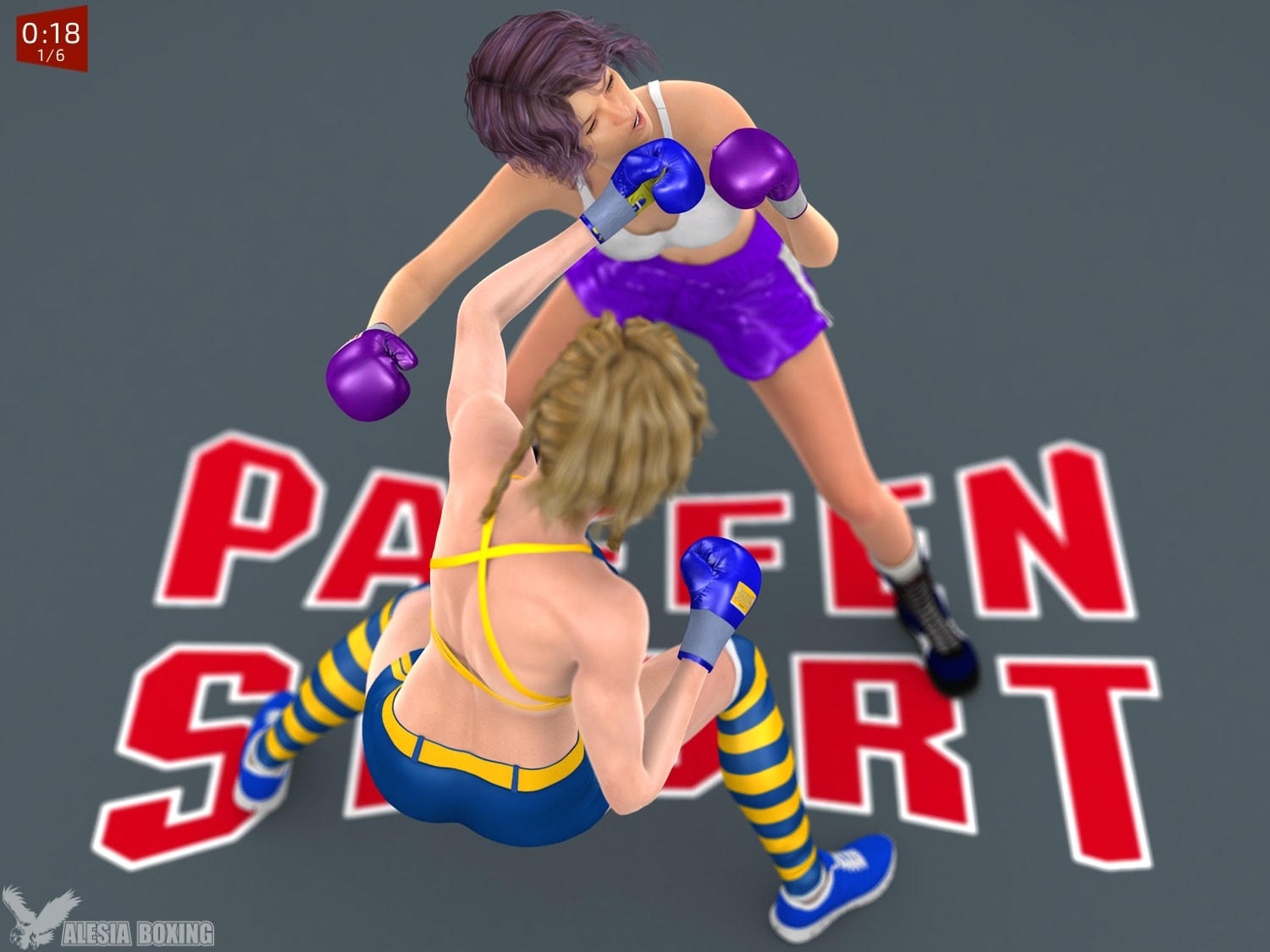 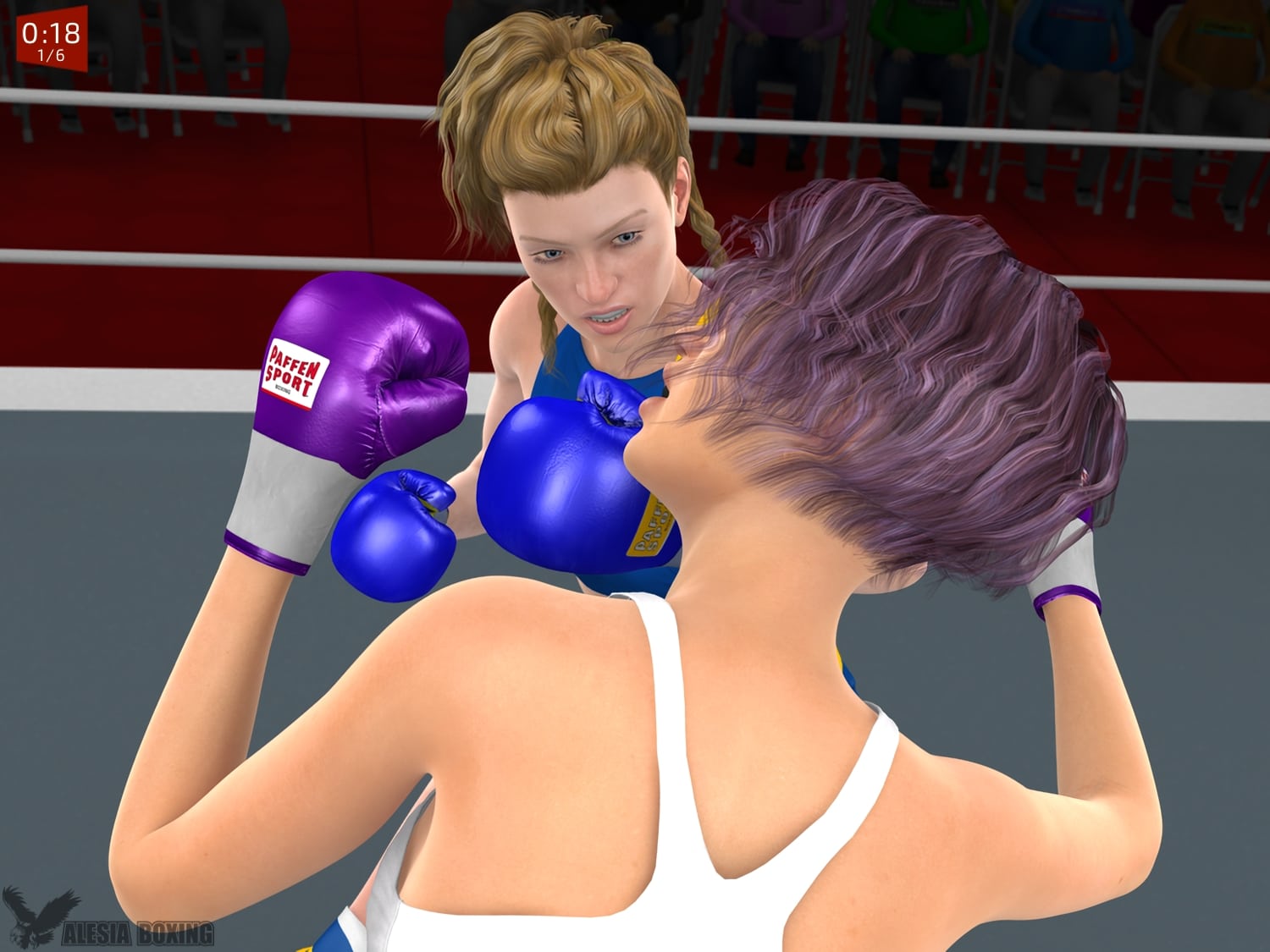 The domination continues in the second round. The sweetheart has already found her timing and range to punish Melina, who doesn’t find a sense of direction when the adopted Berliner sends blue leather flying her way.

The German swings to defend herself and lands some shots, but that only plays into the Swede’s hands, whose counterattacks become heavier. For every blow served by a purple glove, a powerful blue glove smacks Melina. 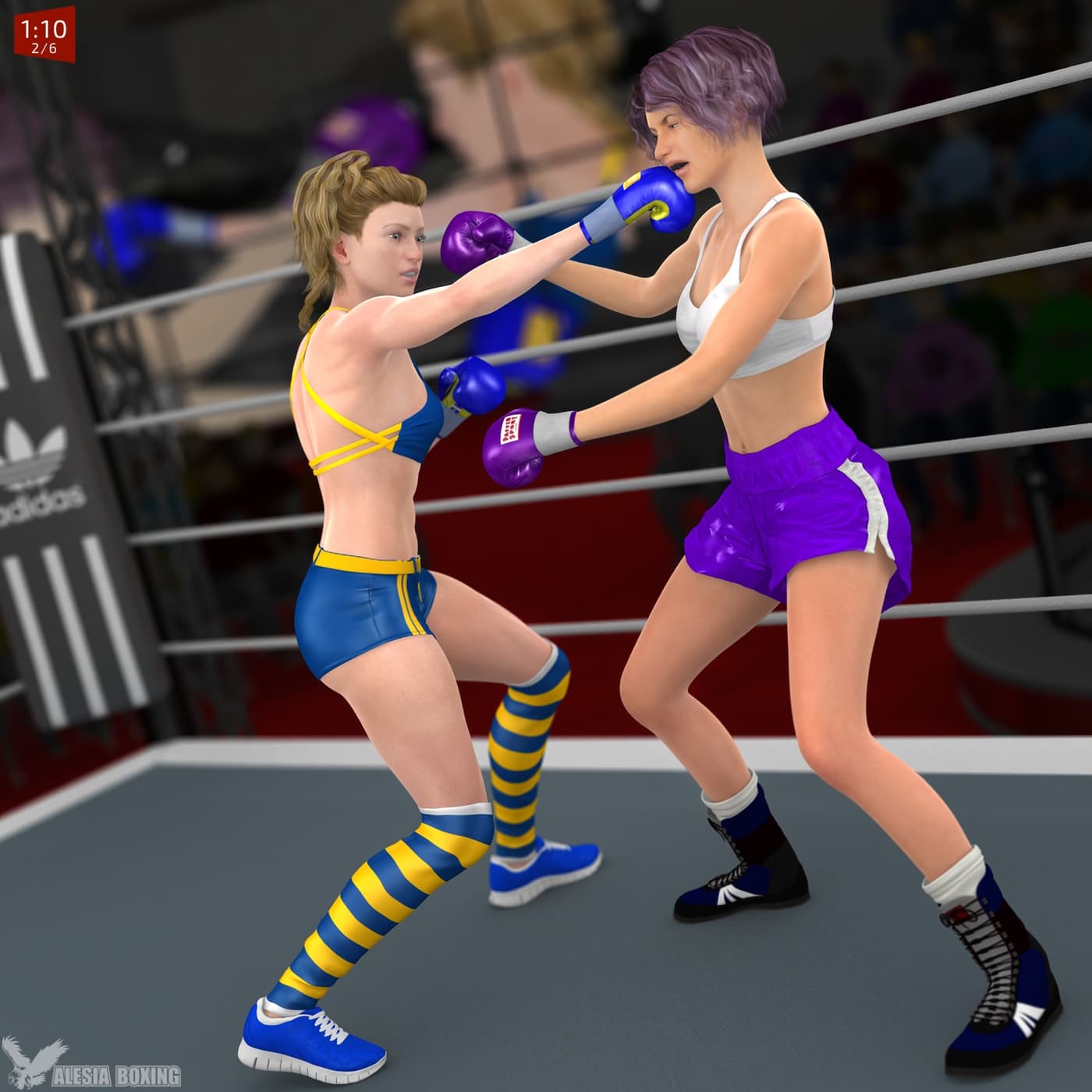 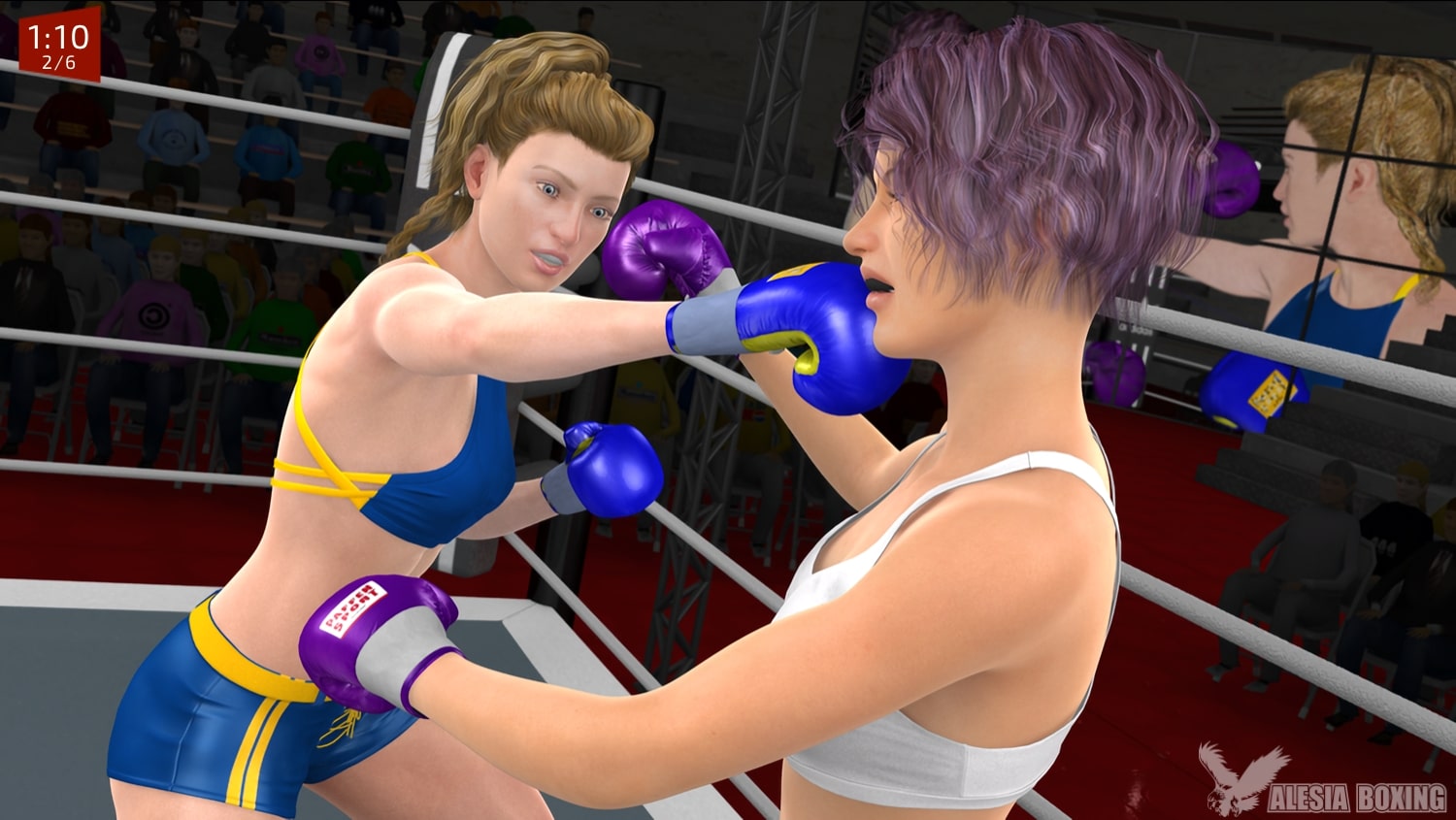 It’s a nasty round for the purplehead, who finds out she doesn’t have the skills to resist the spanking. Seconds before the bell, she is desperate to clinch and spare herself more punishment. Astrid stands strong in the ropes and raises her arms for everyone to see that she’s not the one stopping the action.

In the blue corner, coach Maxim Weiß is all smiles.

Maxim thinks: “Melina is a journeyman but hey, that’s what Astrid needs in a return fight and she’s schooling her better than expected.”

Two seconds later, the bell rings to relieve the underdog. 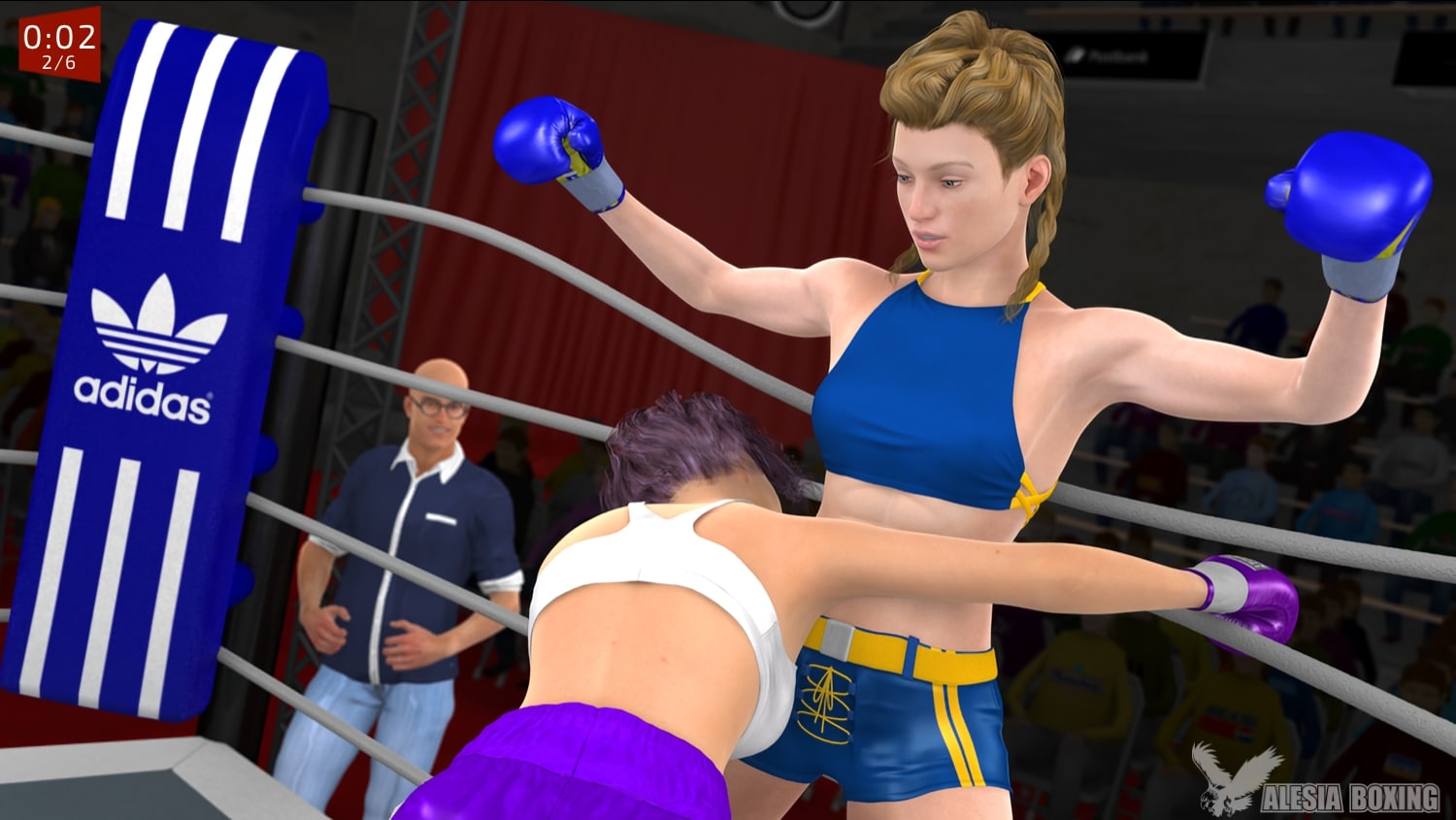 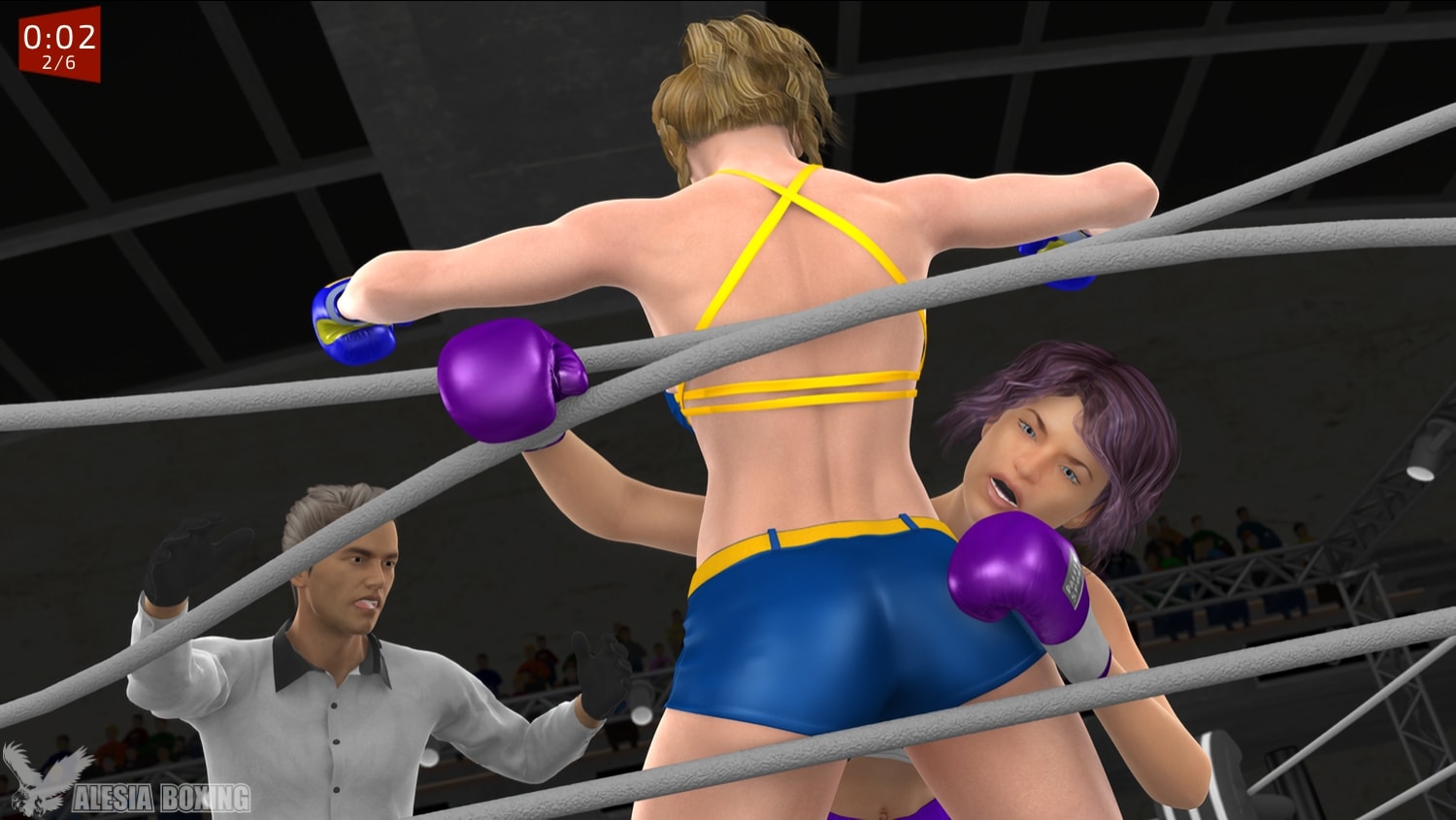 In the red corner, Melina’s coach tells her that she needs to stand her ground a little more. Getting bossed around by Astrid is too dangerous.

Across the ring, Maxim instructs Astrid to keep going. “Don’t give her an inch. She can’t stand the pressure and doesn’t have your firepower. This is for you to win.”

Melina starts the third round with more courage. She throws a wild left that connects with the Swede’s chin, but it doesn’t really hurt. She keeps pressing to change the momentum, with limited success. Astrid digs in, covers up and observes the punching patterns. She’s willing to take a few on the chin to suck the opponent in and make her walk into a big counter.

That’s what Melinda does 35 seconds in. She fakes a left hook and comes in with the intention to throw a right hook. Her advance ends abruptly as Astrid surges with a short right hand that smashes the middle of her face. PAFF.

The audience cheers loudly as it relishes the sight of a good looking blonde beating up her opponent. 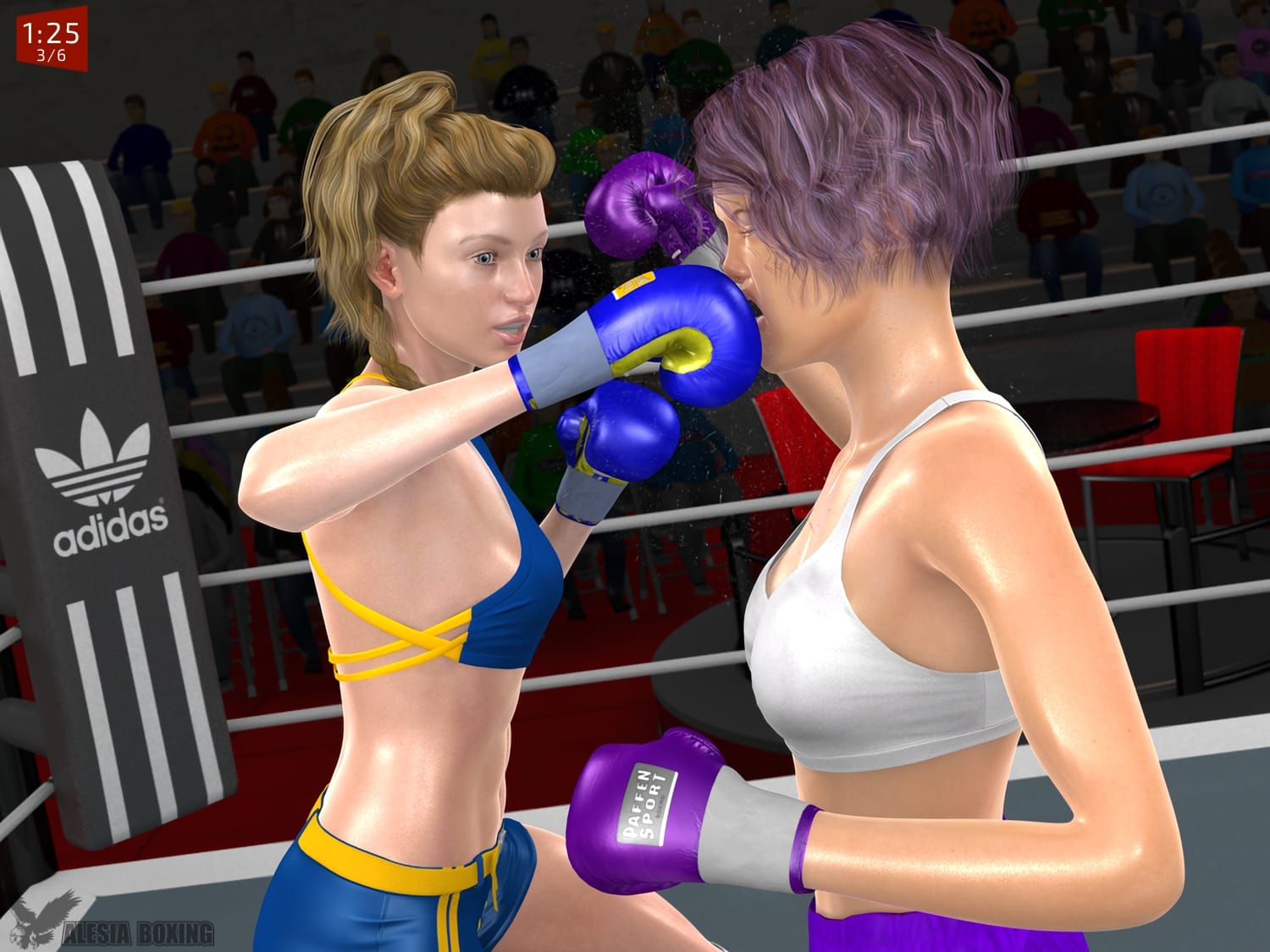 The Hanoverian is hurt. She retreats instantly across the ring and turtles up near the ropes. The swarmer doesn’t need more to start a hunt.

Astrid sends a short right hook in the guard to test that defense. The prey keeps a compact stance to block it. 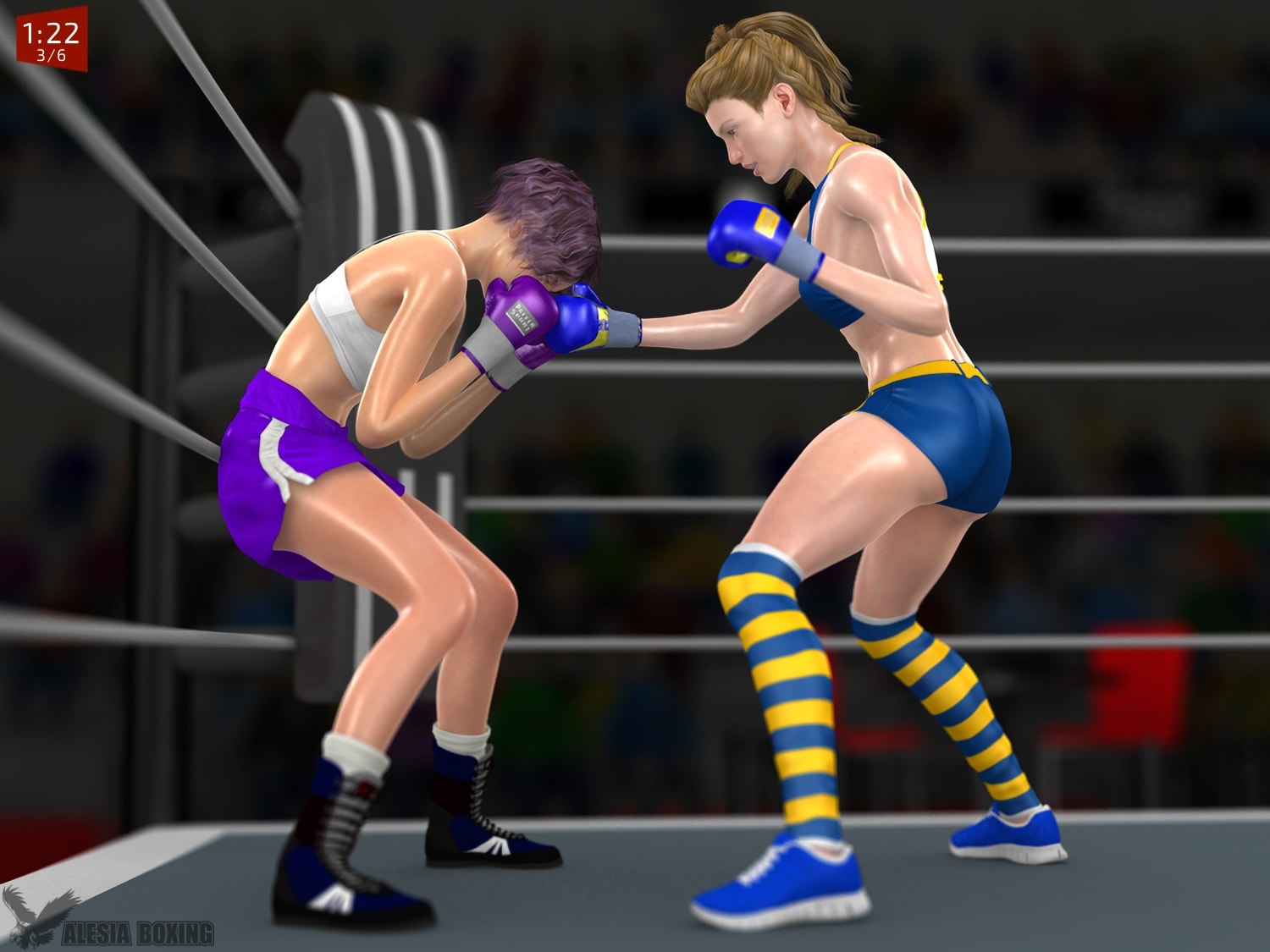 What she doesn’t know is that the punch is a decoy. The Swedish Sweetheart takes a step forward, just outside on the left, before unloading a left hook to the body. Her glove lunges forward to find Melina’s right side. The impact crushes ribs against her liver. Melina groans. 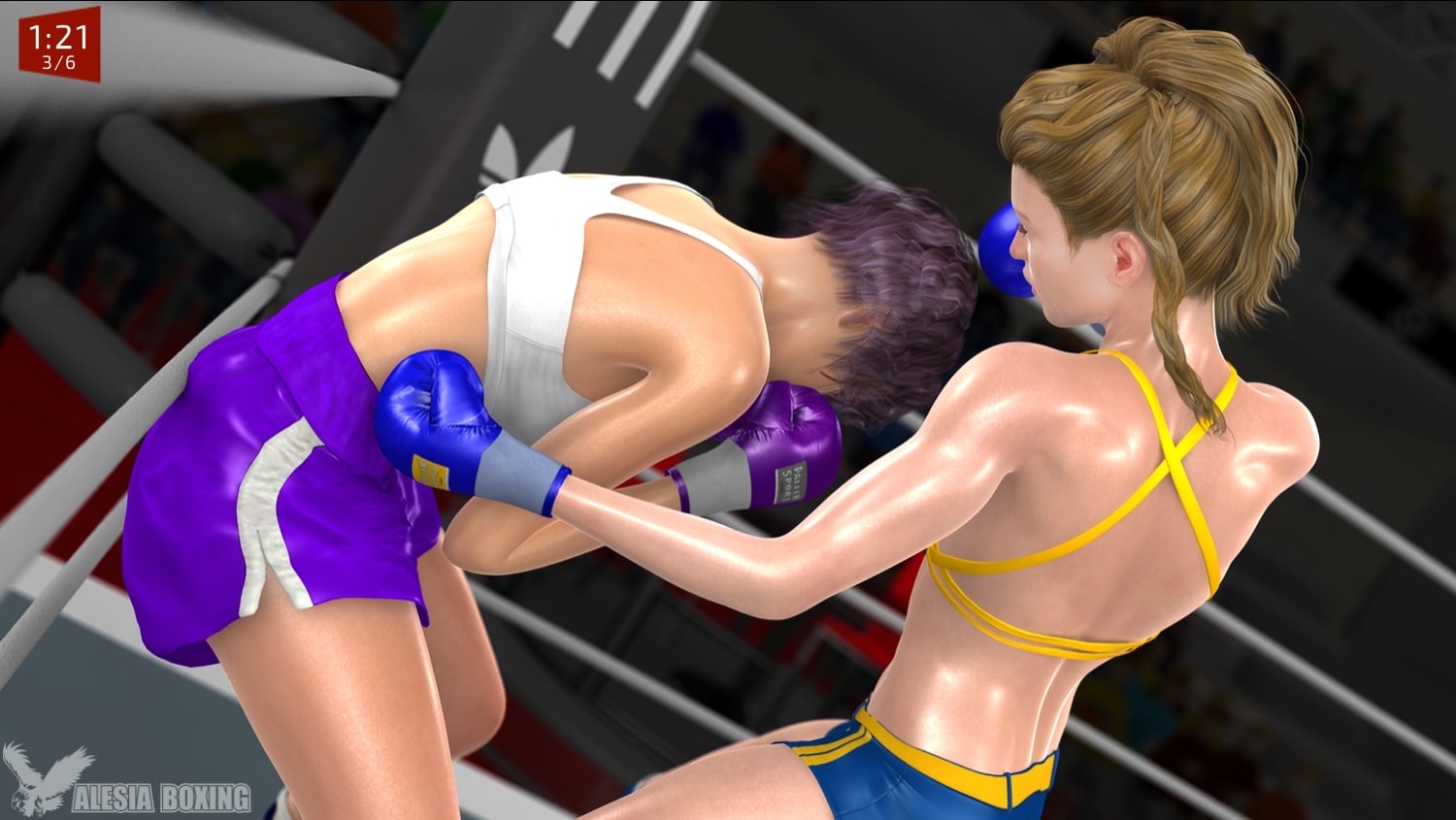 The poor girl sinks to her knees, puts her right hand on the canvas and groans again as she covers her body with the other arm. The pain is unbearable.

Astrid takes a step back and before she can even go to the neutral corner, the official is right in front of Melina.

Alex thinks: “This girl is overmatched. I don’t care if she gets up. Not letting her get beat up further.”

He stops the fight. 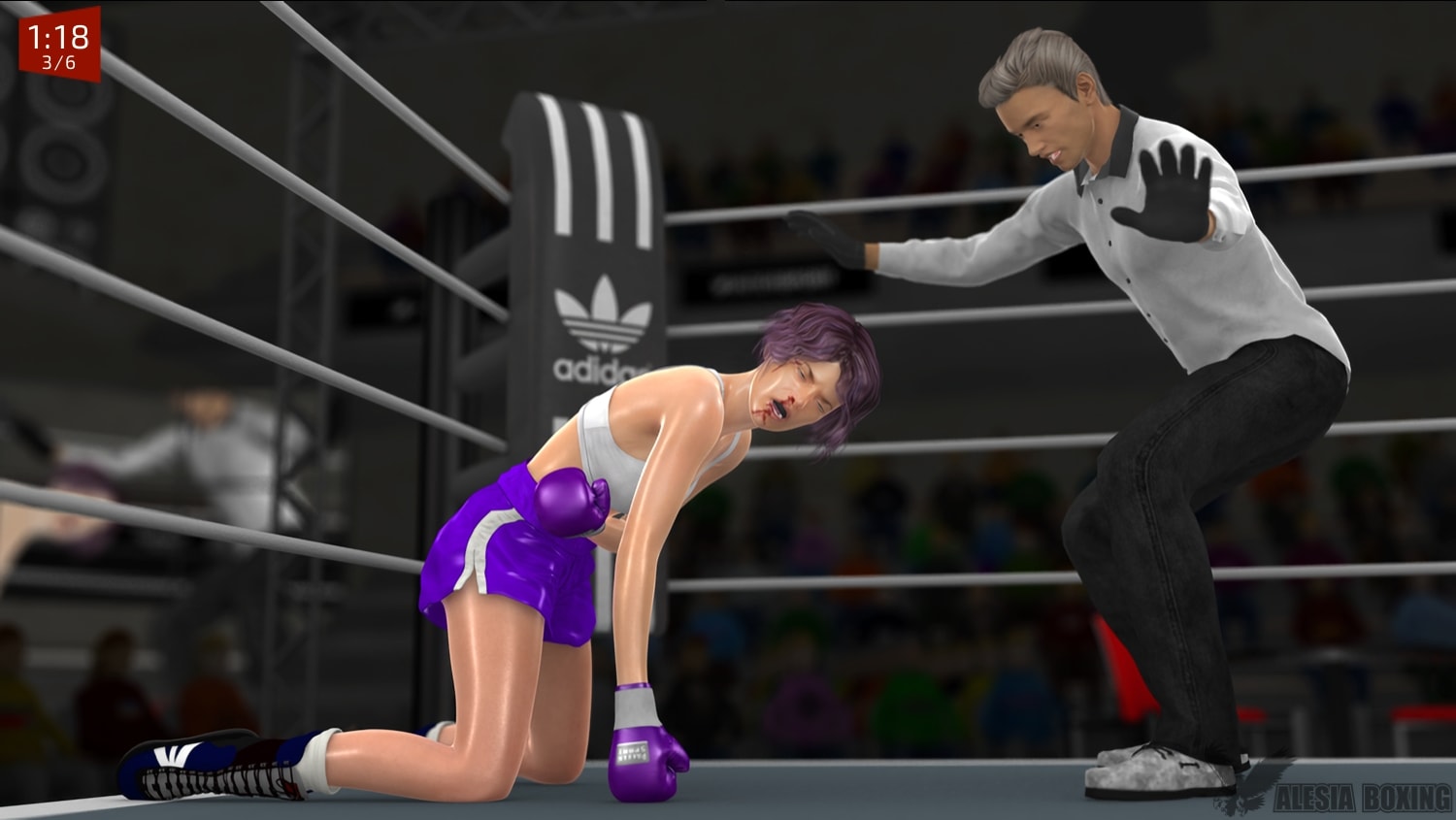 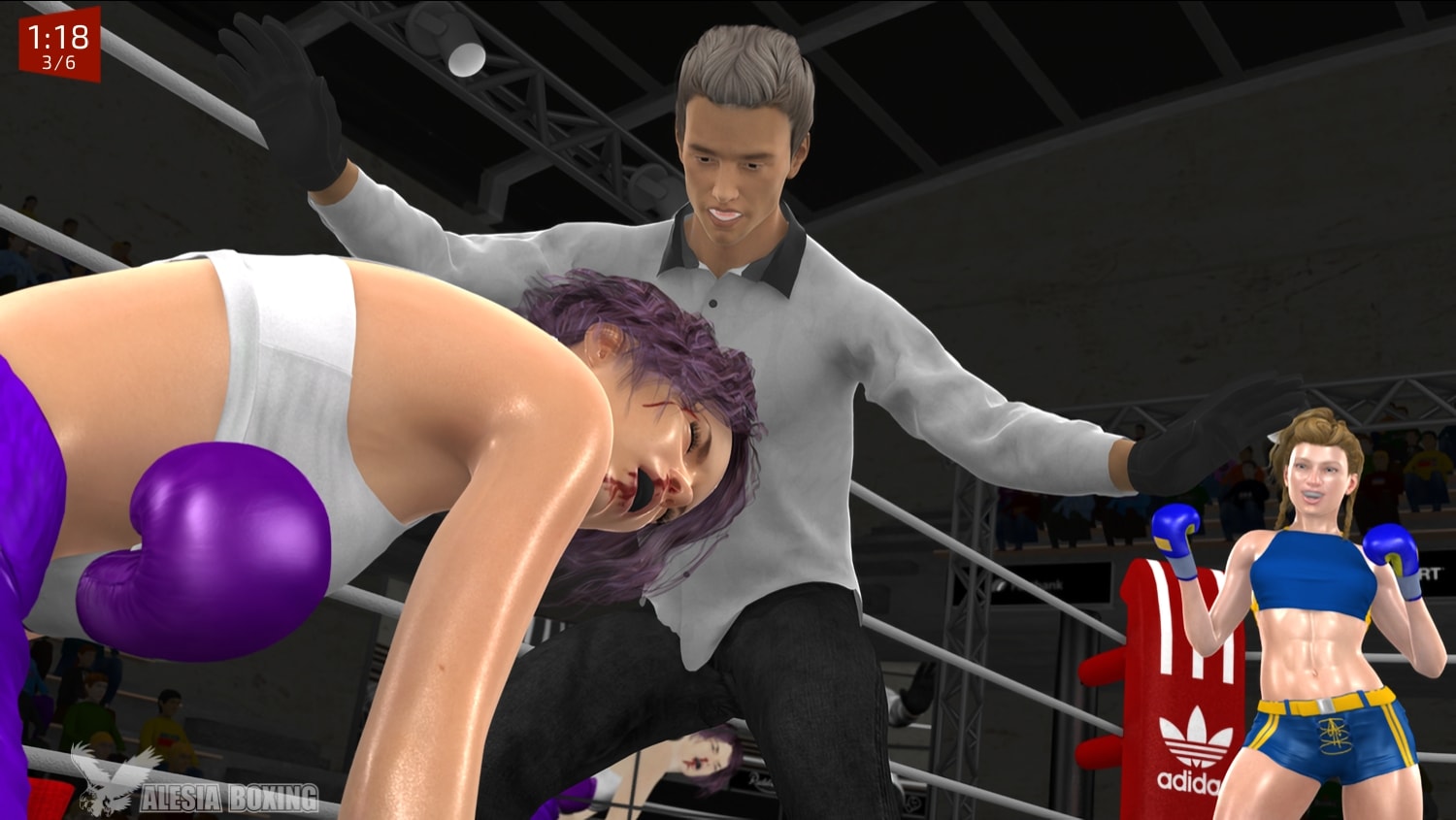 The crowd roars. Coaches get in the ring. Maxim gives his new girl a hug. Astrid goes to thank a hurting Melina for the fight.

Astrid: “That was pretty easy, huh?”

Maxim: “You know why you had it. We needed a successful return to show what you can do.”

Ring announcer: “Ladies and gentlemen, we have a winner by knockout! From Berlin by way of Gothenburg… Astrid ‘Swedish Sweetheart’ Olsson!” 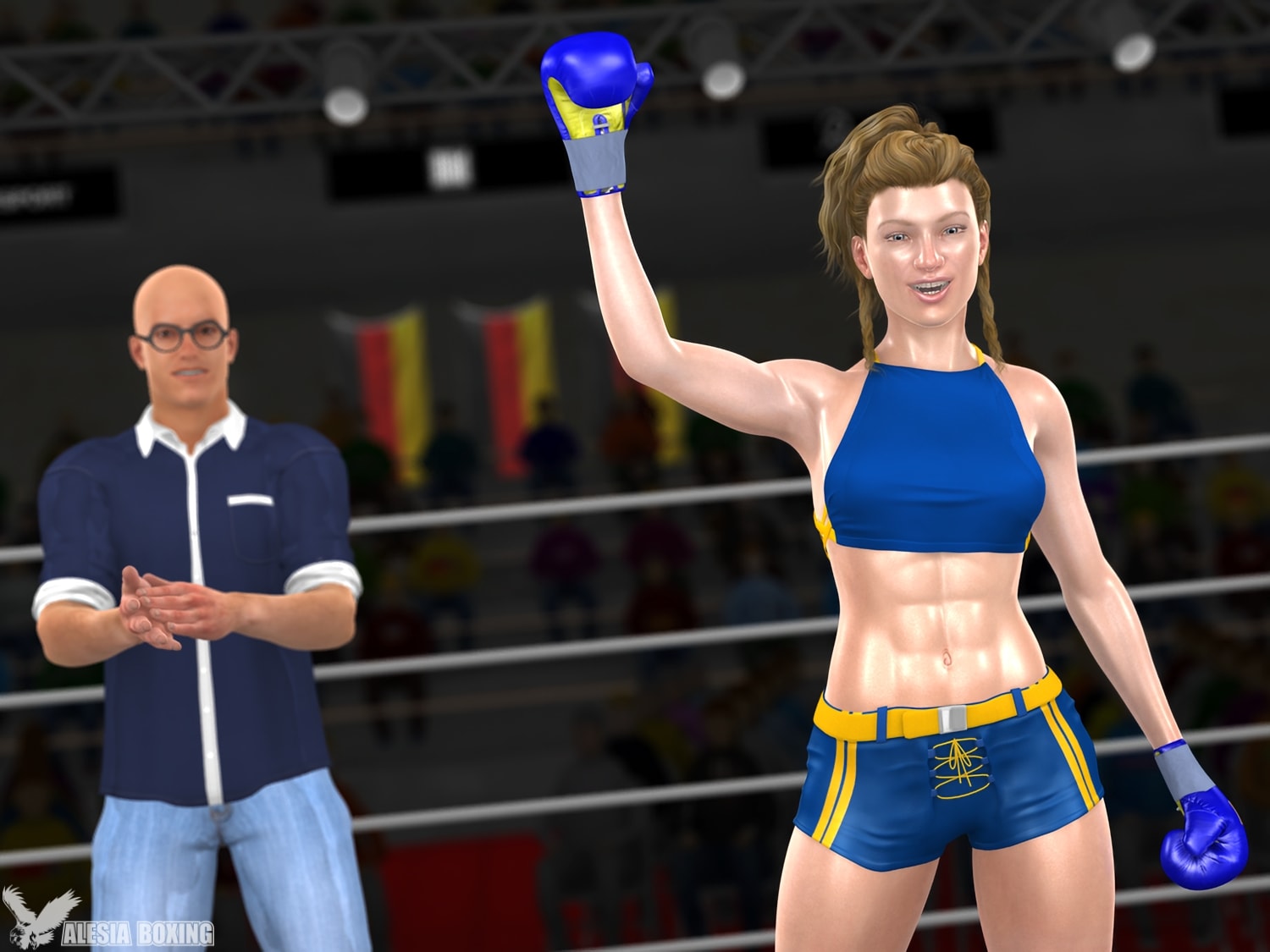 Astrid’s record gets a positive bump at 8-4, with four knockouts. She leaves the ring with a feel-good sentiment in front of a crowd that just fell in love. There are few things as uplifting for a boxer. 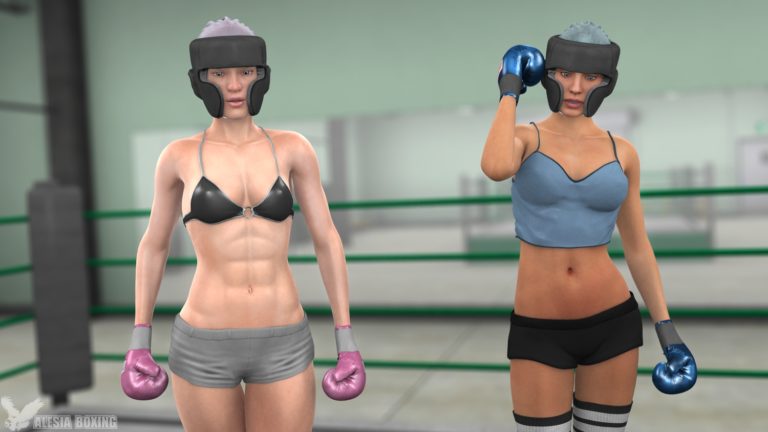 Heather takes on Astrid in Vegas 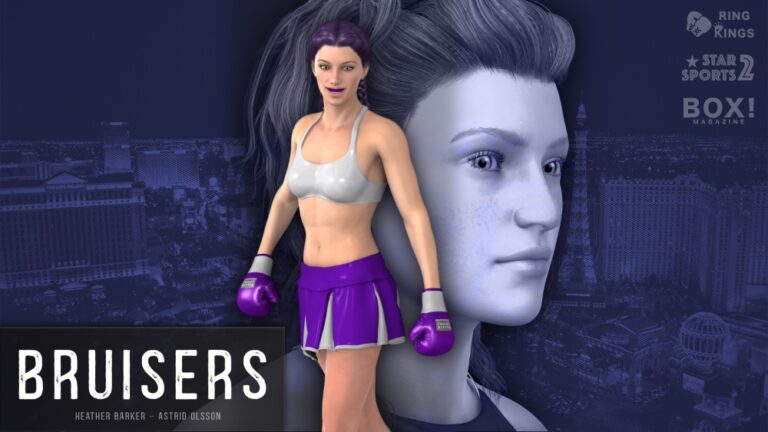 An original character created by Alex and now part of Alesia's world, she loves a good scrap no matter what happens in it.
All posts
basic HTML to style comments