DE Box-Promotion and their partners announce that a unique boxing match will take place at the Treptow Arena, in Berlin. It will involve two Muslim fighters in Anna “The Ice Queen” Schwartz (14-6) and Leyla “The Volcano” Abdul (10-0).

The bout is scheduled for 10 rounds in the Super Lightweight division, and it will be broadcast on Box TV in Germany. The event is backed by Sport Couture, with most of their contribution going directly to the fighters.

Schwartz is ranked number three in Germany, against the number seven position for Abdul.

“This has cultural meaning, says Heidi Becker, CEO at DE Box-Promotion. We will see two capable German-born contestants whose faith is not a barrier to boxing. One fights with her head uncovered and the other broke ground by getting a rule change for hijabs in the ring. On top of that, we are looking forward to a good, clean fight.”

“Berlin and Germany are multicultural by now and I’m delighted to be involved in an event that will display our diversity, says Schwartz. I will win, of course, but independently of the result, this fight is a sign of social progress.”

“I dispute Anna’s prediction but I’m with her regarding the meaning of this fight, reacts Abdul. There is no room for discrimination against women and Muslims in sport and we strive to be poster girls for achievement, determination and skills. May the best boxer win.”

The announcement attracts a lot of interest from mainstream media in Germany. Various outlets, big and small, are giving it coverage.

The biggest public broadcaster in the country sent journalists to the field for a one-hour documentary on what’s happening in Berlin’s gyms. They report on the presence of young women of all backgrounds, from the “classic” white-skinned Germans to the ones born with foreign ancestry, to recent refugees.

The two stars give interviews in the studio.

“Freedom shouldn’t be negotiated with anyone, says Anna. Wearing a hijab in the streets of Germany and being uncovered in the ring is my way to exercise freedom. There are people who give me funny looks for it, but I don’t care anymore.”

“With this fight, we are handing prejudice a resounding defeat.” 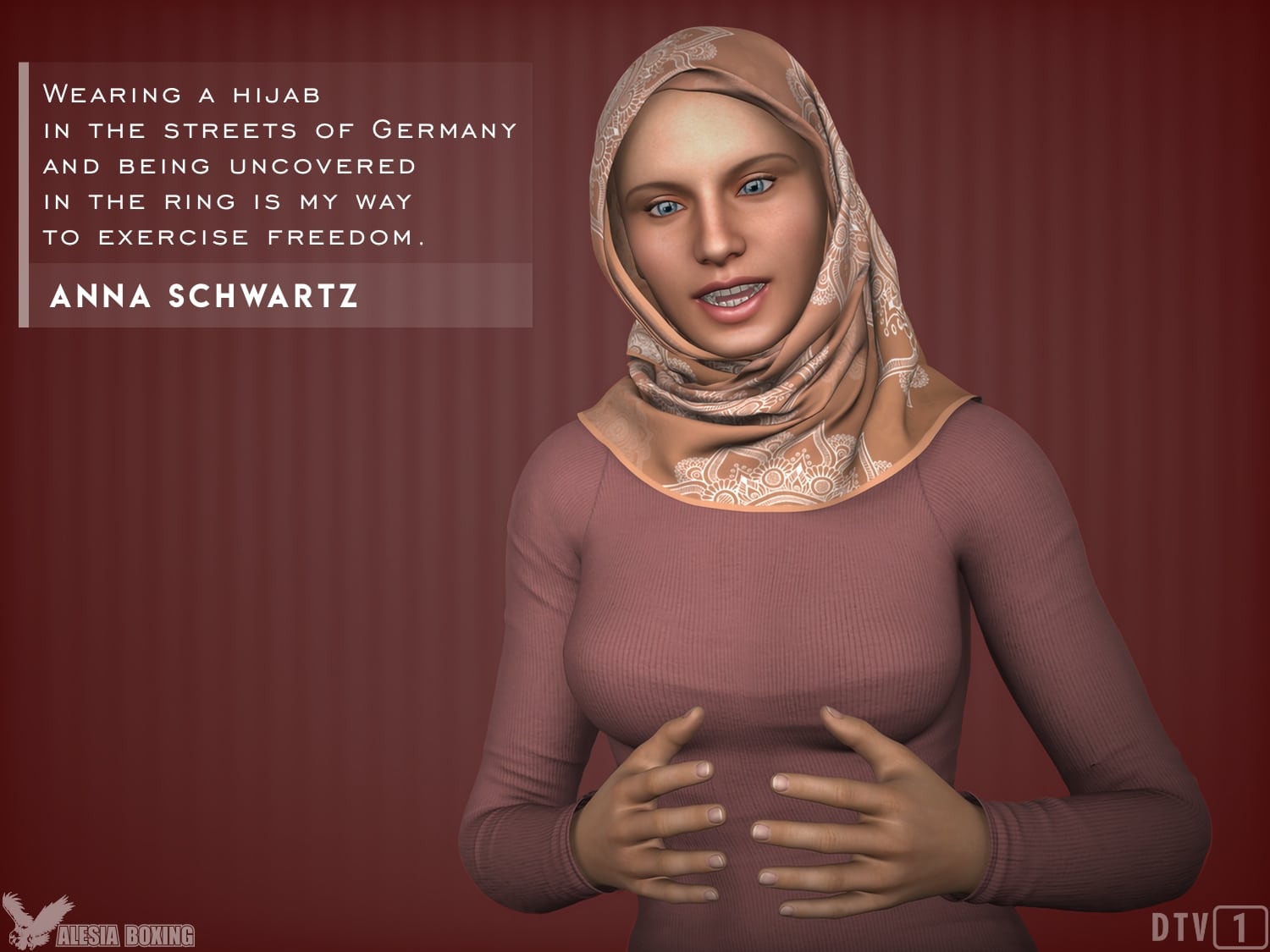 “This fight is about a lot more than the two of us, says Leyla. We primarily want girls to see that they can do anything, from a career in sports to fixing pipes or leading a law firm if that’s what they fancy. My hope is to set the standard.”

“At the end of the day, we will both get paid for doing what we love, and everybody should be able to say the same. Only you should pick your lifestyle and clothing, no matter who you are.” 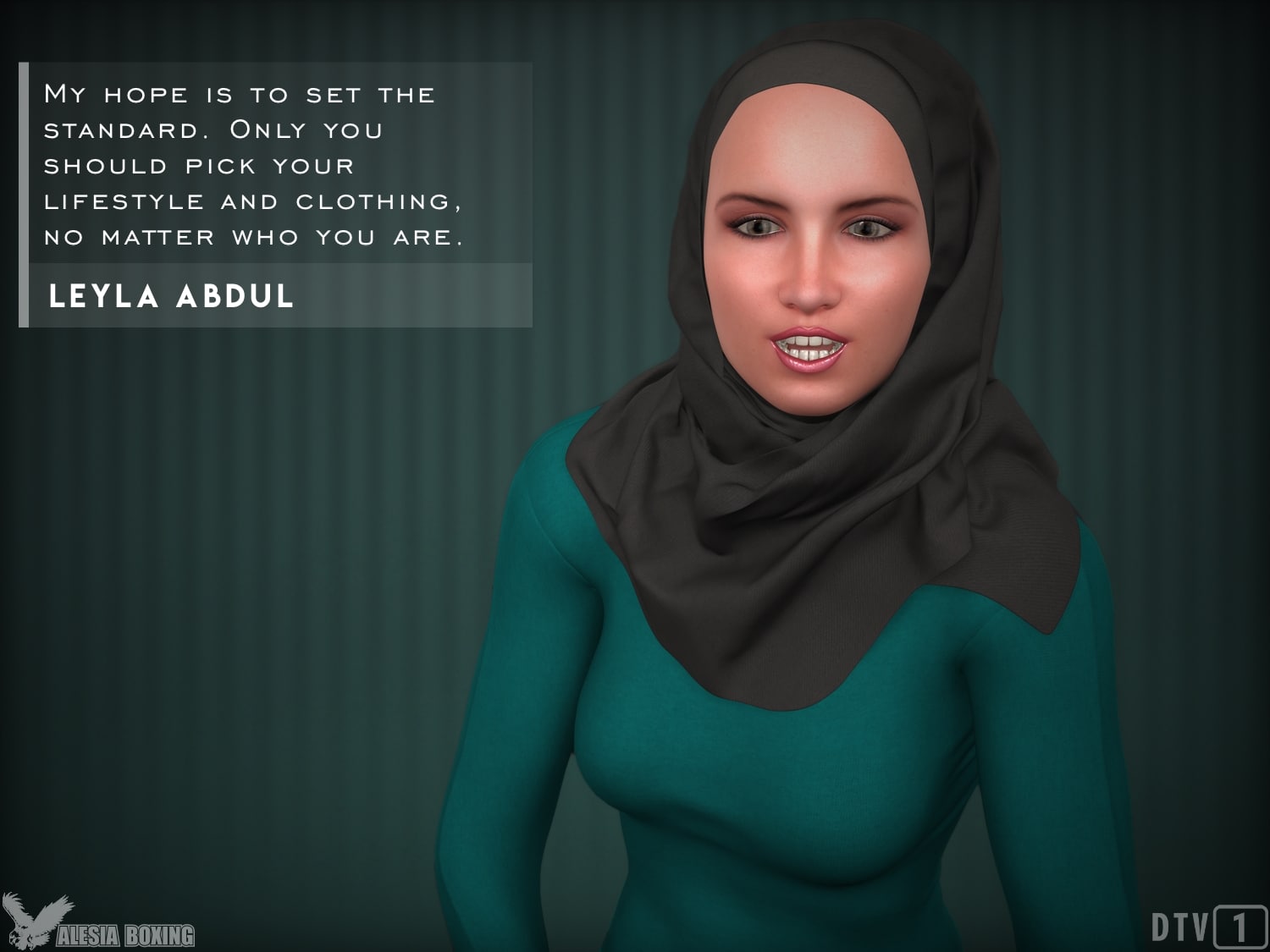 How did this fight get booked? We’ll find out in the next post. 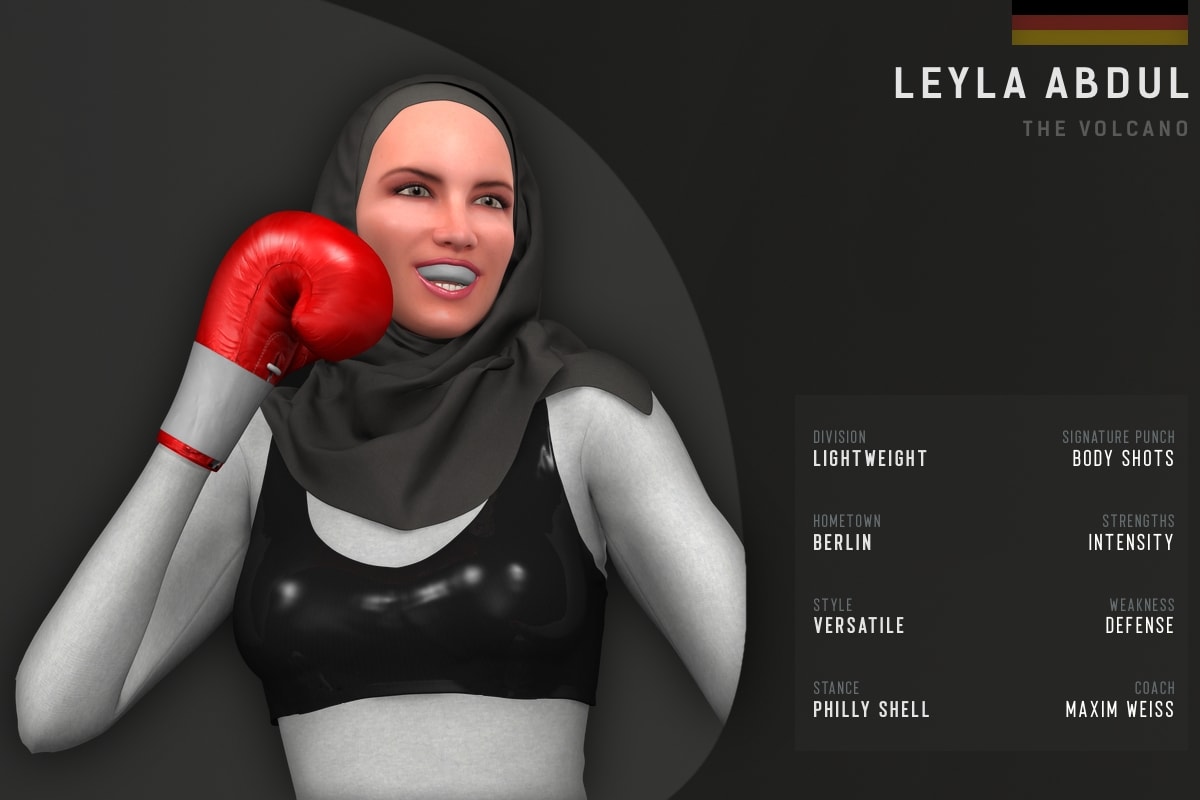 The young Muslim was brought to this world by Lebanese parents who migrated to Germany for civic and economic reasons. Her father Hibrahim left Lebanon with his wife Munisa in the late 1980s, when the recently formed couple had enough of the civil war, which decimated their families. They needed a new start.

Germany turned out to be the promised land.

A highly qualified engineer from a family that had brainpower in ample supply, Hibrahim had no problem learning German and finding a job at a firm headquartered in Berlin. His wife Munisa was also keen to be accomplished, with a clear interest in fashion. She found work as a small and local clothing label that slowly grew within Germany.

Leyla’s upbringing took place in an interesting context to say the least. Her parents are deeply religious, but they fully embrace the freedom and tolerance of Berlin, passing on their mixed values to their daughter. The message is: get a good education, be faithful to Allah, dress modestly… and enjoy life. Smash barriers if you have to.

Thus, Leyla grew up with an appetite for ambition. Successful in school, falling in love with boxing changed plans which may have led to engineering or architecture.

At the tender age of 11, Leyla saw Regina Halmich give a spanking to Ria Ramnarine on television. She was inspired by the veteran champion’s work and made sure to see the last three fights of her career in person. This included the grande finale against Hagar Finer in Karlsruhe.

Between the Ramnarine and Finer fights, Leyla lobbied her parents to earn permission to join a boxing gym. It was quickly granted. Hibrahim and Munisa felt like their daughter needed to explore something, which she did.

Leyla never had the biggest punch, the best defense or the most speed. However, brainpower and a fearless attitude more than made up for it. Trained by a top amateur coach, she learned the unique combination of the philly shell stance and pressure tactics. This original approach to boxing totally worked. Leyla won 37 times and lost only 3 times in the amateur ranks.

However, Leyla had to wage war against boxing’s conservatism. With the help of a sports clothing startup called Sport Couture and a “pro bono” initiative by a lawyer, she staged a legal challenge against the hijab ban. They got it overturned, forcing boxing federations to accept hijabs in the ring.

This “political” move was covered by German mainstream media, making Leyla famous. As she racked up the wins, she also received sporting recognition.

Leyla turned pro with the support of a small Berlin-based promoter. She and her coach took on a different approach to scouting than most fighters. It paid off since Leyla is undefeated with 10 wins as a professional boxer.

What is that specific approach, and who will she fight next? We shall find out in the next post.