It’s showtime in Berlin! We tune in on Box TV to join Esther Schouten in the late evening as a DE Box-Promotion event is well under way at Treptow Arena.

Esther: “Welcome back, dear viewers, for the semi-final of our program; a special attraction in the women’s Super Lightweight division. Anna Schwartz, the number three in Germany, will battle Leyla Abdul, the number seven and a starlet who has gotten the boxing world to accept the hijab. Two Muslims with contrasting ring styles.”

Esther: “I am alone tonight at the broadcasting desk because my analyst partner is fighting this time. How dare she. Let’s have the introductions.” 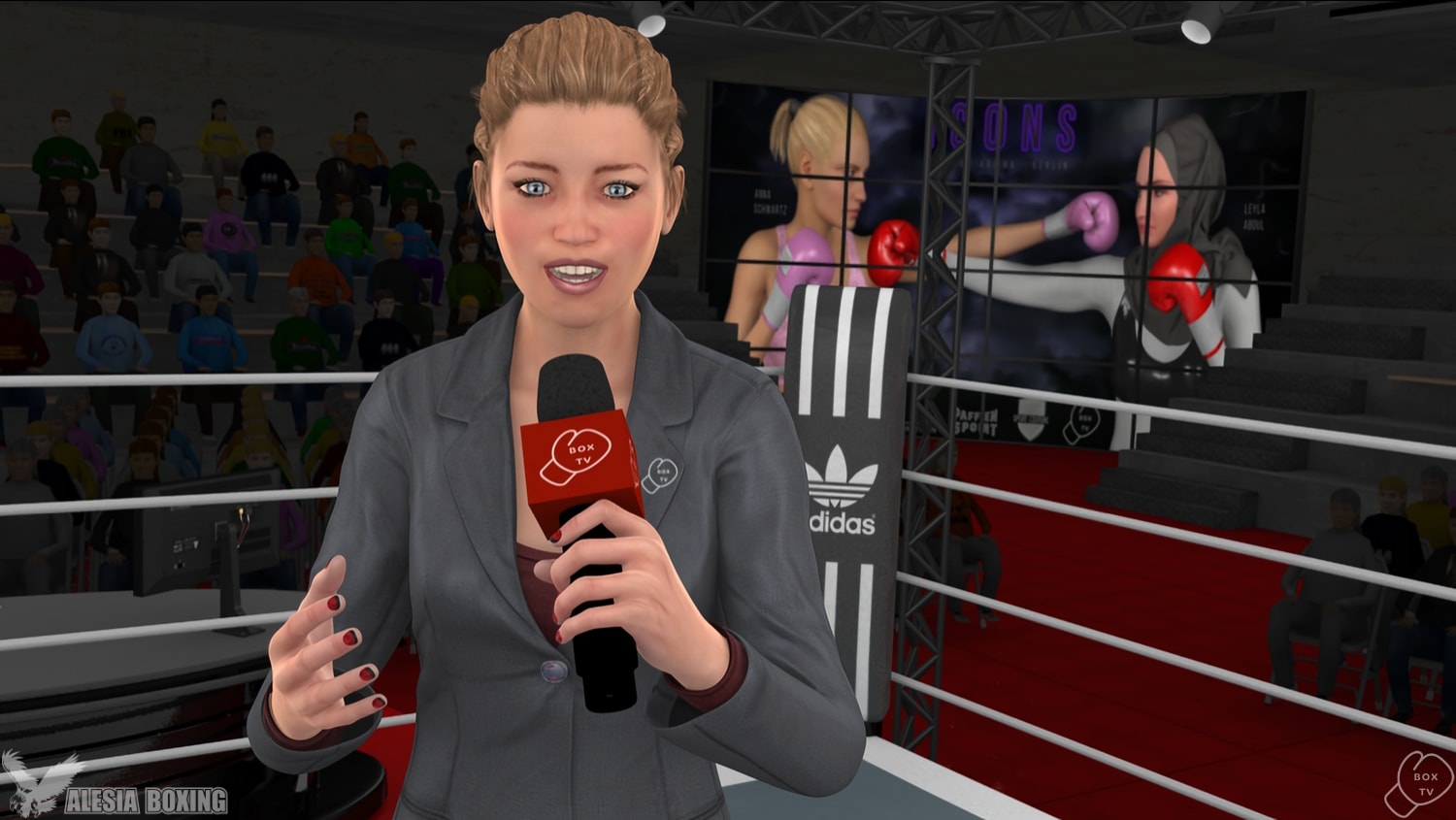 The Volcano erupts from the drapes with a massive grin, with her charisma shooting like lava around the arena. Her walk-out song is Fight by Doro Pesch, a classic of German hard rock.

Esther: “Abdul is not a classic swarmer, but she finds her comfort zone when opponents and uncomfortably stuck between her, the ropes and corners. She fights out of the Philly shell, cuts the ring well and lets her hands go when you have nowhere to go. She’s a fearsome body puncher. This is her first serious test as a professional.” 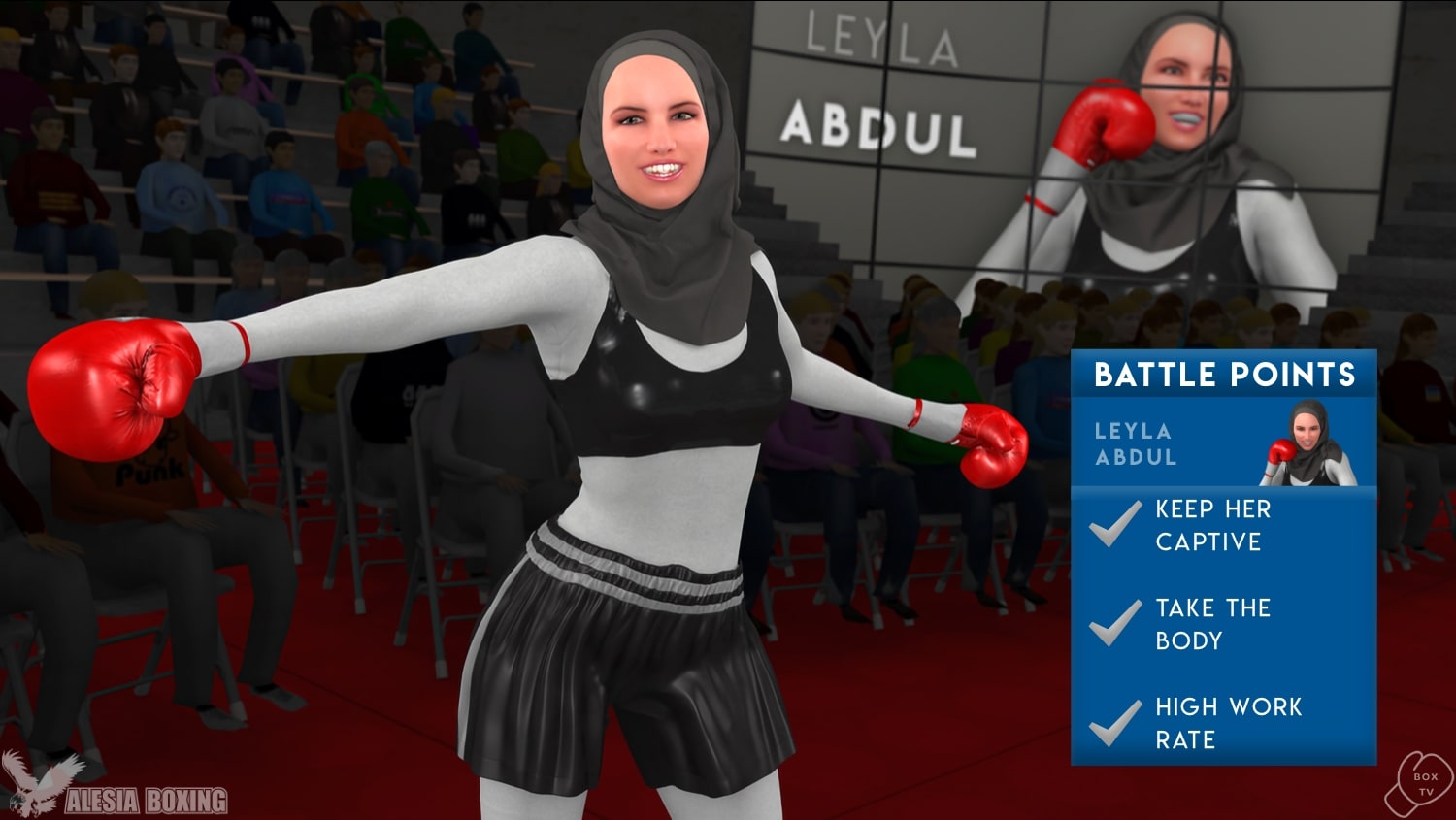 A smiling, pretty-in-pink Berliner walks out to Ice Queen by Within Temptation, with a pause for the camera before climbing in the ring.

Esther: “Schwartz has struggled under pressure in her last fight, and she faces someone who can give her problems in the same fashion. She must fight from the centre of the ring, keep her feet moving, tighten up and counterpunch. No matter what happens, we have two lovely boxers whose smiles are highly contagious.” 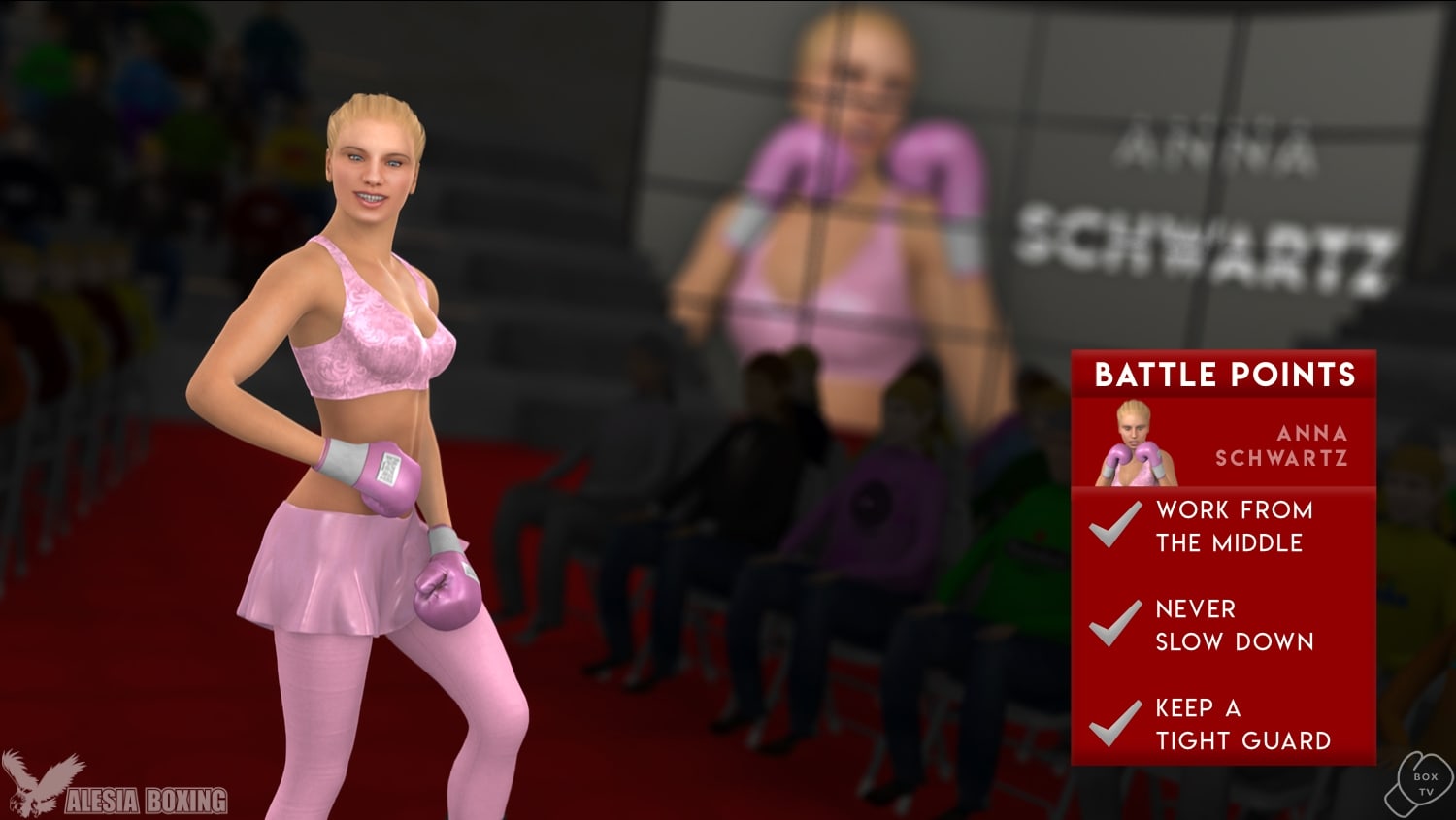 Ring announcer: “Ladies and gentlemen… welcome back to the Treptow Arena for the semi-final of the evening. Ten rounds of boxing in the Super Lightweight division. Introducing first, in the blue corner… ranked seventh, she is wearing black and white with red gloves, is aged 24 and weighing 139 pounds. Trained by Caspar Aach, she hails from Berlin and has 10 wins on record, three of them by way of knockout. She is the UNDEFEATED Leyla ‘The Volcano’ Abbbbduuuuuuuulllll!”

The crowd gives her a warm reception.

Ring announcer: “Her opponent across the ring fights out of the red corner. Wearing pink, weighing 139.7 pounds and coached by Maxim Weiß. She is ranked third in the division in Germany and has a record of 14-6, with 6 wins by way of knockout. Here is Anna ‘The Ice Queen’ Schwwaaaaarrrrrtttzzzz!”

Another enthusiastic welcome follows. The crowd seems to love the two boxers equally.

The contestants join referee Zelda Deniz in the middle of the ring.

Zelda: “We went over the unified rules in the dressing rooms. This fight is scheduled for 10 two-minute rounds. There is no three-knockdown rule. There is no standing eight-count. You cannot be saved by the bell in any round. If you knock your opponent down, you go to a neutral corner before I count. I will deduct a point for any intentional foul. Got questions? No? Have a good, clean fight and don’t mess with me. Touch gloves.” 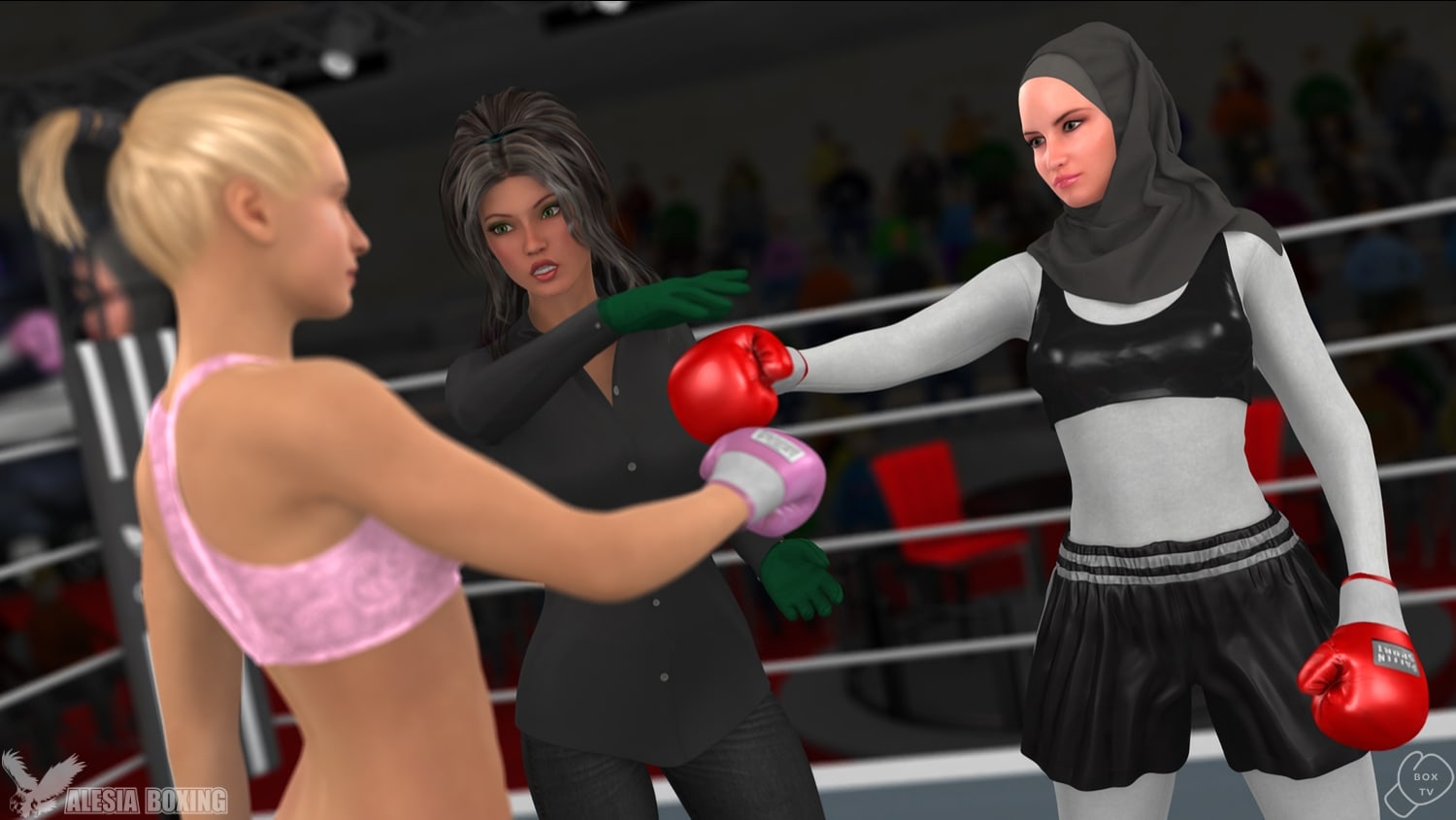 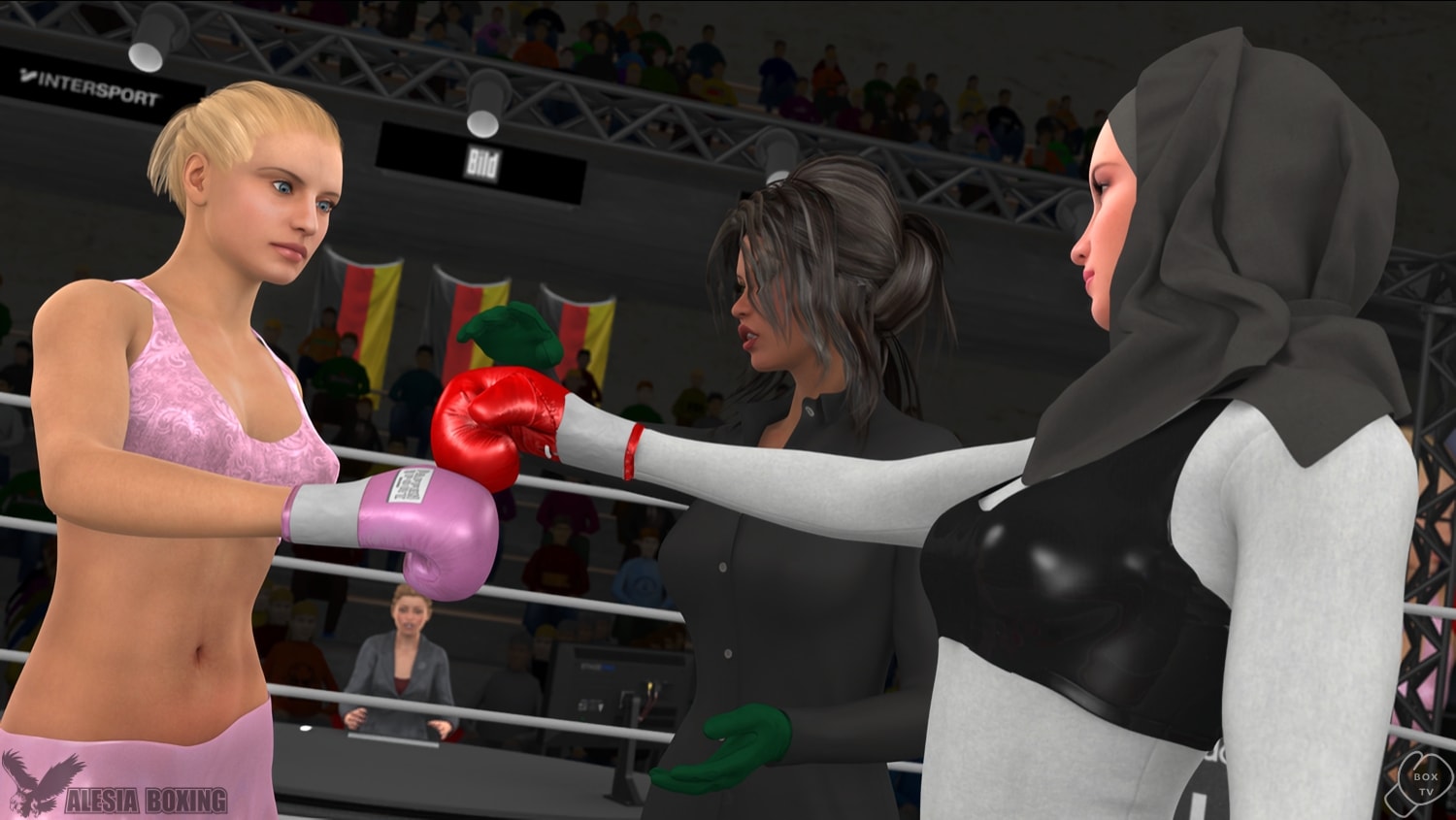 They go back to their corners.

Maxim: “Alright. Hold back in the first round and make her show her hand. She’ll give you leather and that will give her the round, but give us the fight.”

Anna: “Right. If I scare her early, she won’t walk into the counters later.”

Esther: “Before the action starts, we see that a special guest at ringside is Alesia Schumann. She is the girlfriend of Anna Schwartz as well as the German champion in their division. Also number one contender worldwide, expected to face champion Anastasia Orlova later this year.” 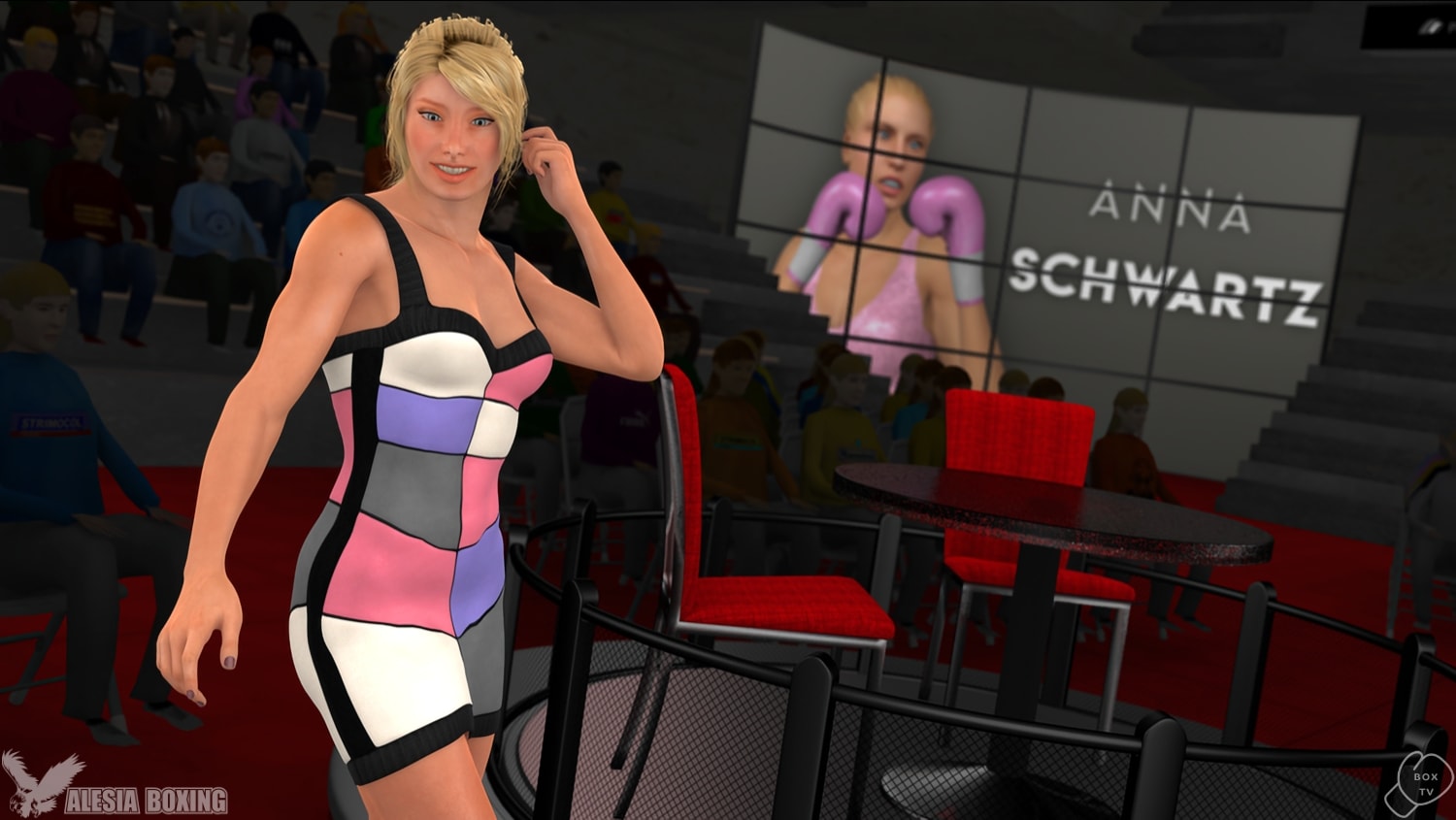 The crowd cheers as the two Muslim boxers tap gloves and start circling. They throw jabs that hit gloves to test defenses and reactions.

It’s only a matter of seconds before Leyla’s jab directs traffic from the middle of the ring. Shortly thereafter, she comes forward, twists her upper body and delivers a right hand down the pipe. It lands in the middle of Anna’s face, with a satisfying “pish” leather sound that gratifies boxing fans.

Esther: “An accurate right with intention from Abdul doesn’t go unnoticed when you see, and feel, a flash of red leather coming to strike you.” 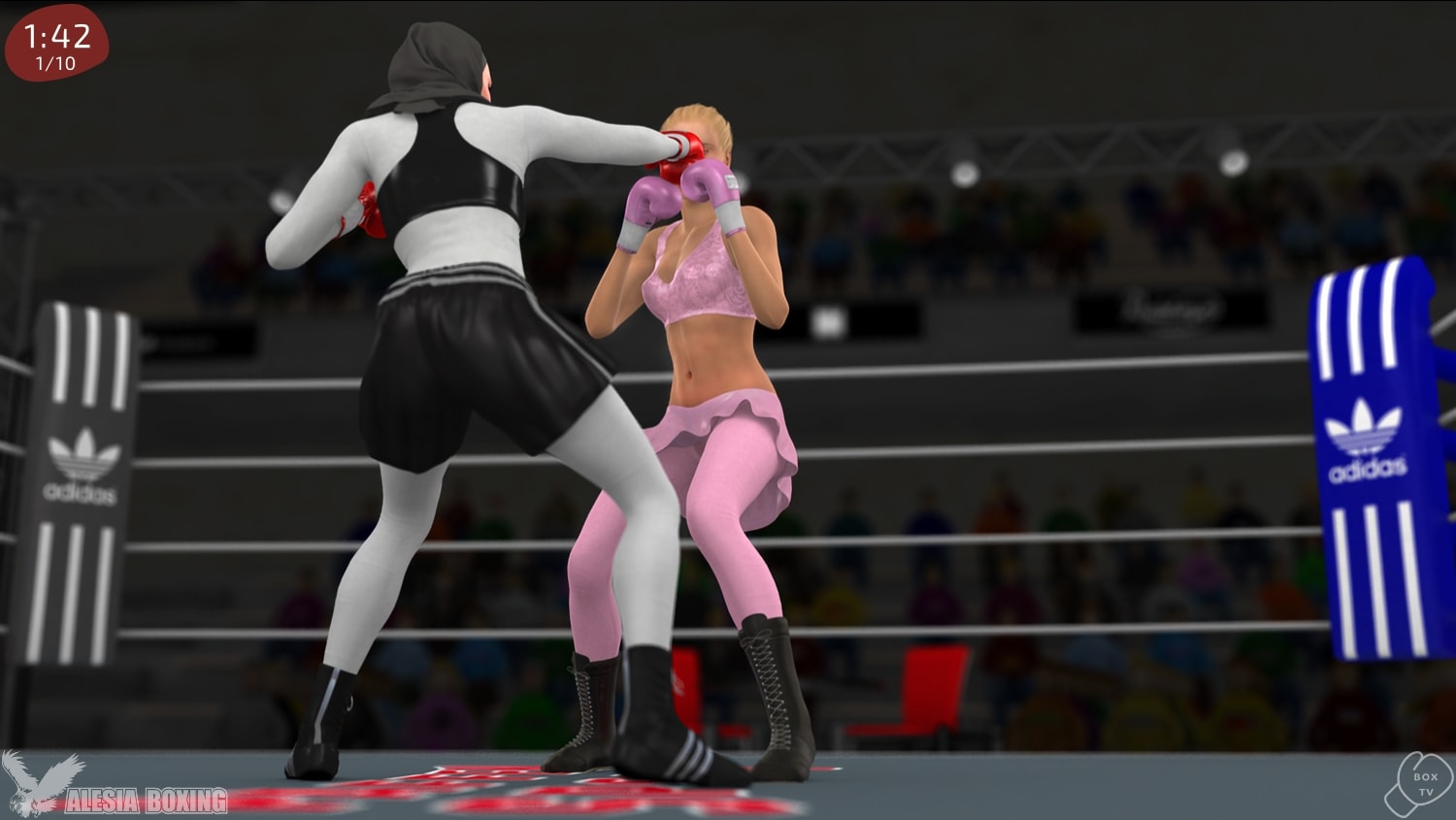 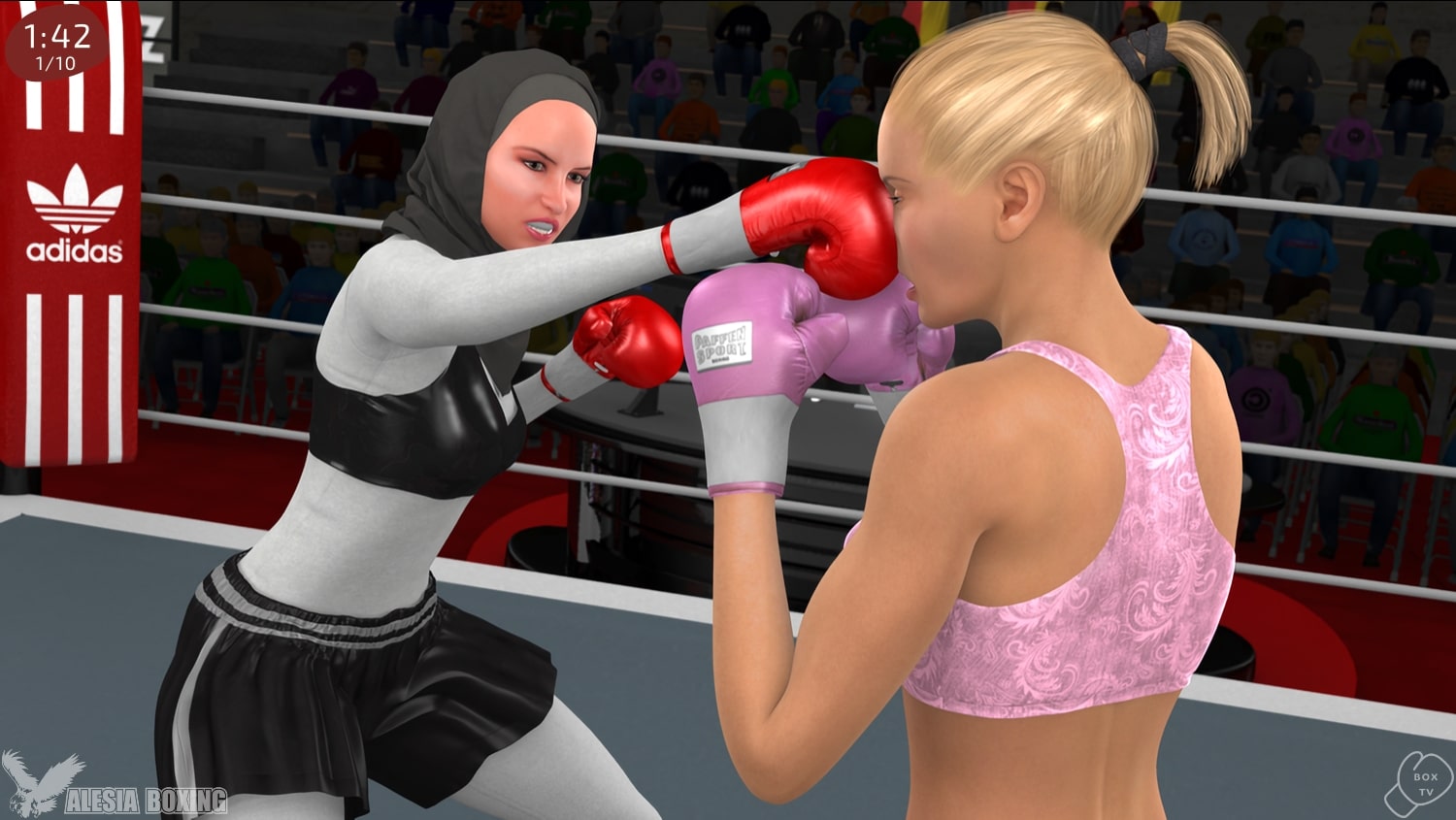 Anna keeps holding back, letting the volcanic Muslim come after her. There are a few even exchanges, but most of the time, the girl in black and white gets her way. The Ice Queen is gathering data at the cost of taking a few punches.

A highlight of the round comes one minute in. Anna lets a right hand come out and Leyla goes inside to smack her with a left hand, backed up by upper body swiveling. Paff!

Esther: “Leyla Abdul is doing well in this first round, landing punches and pulling the strings at will. Schwartz is a bit passive, either because she isn’t warmed up yet or because her opponent started faster than expected.” 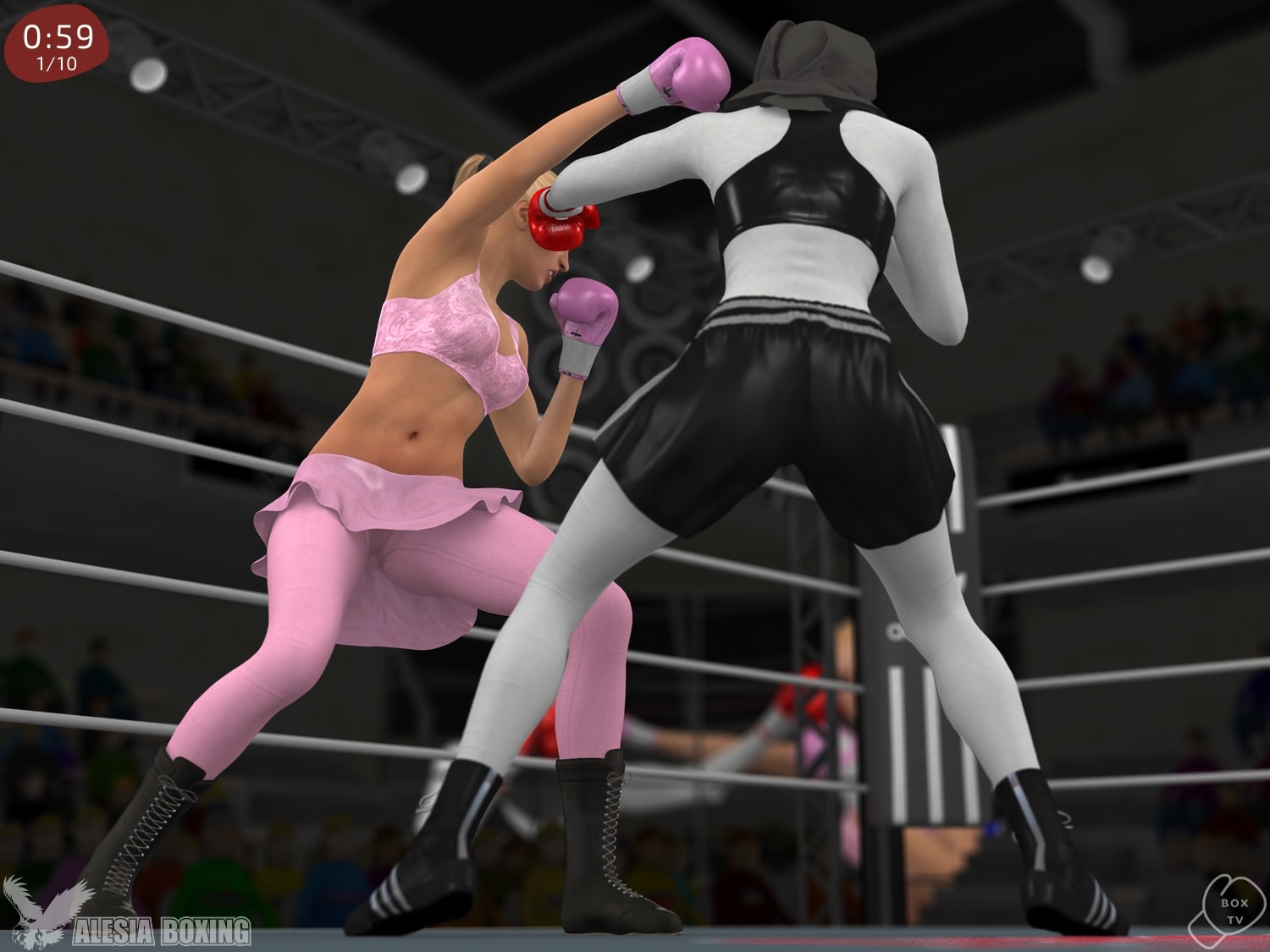 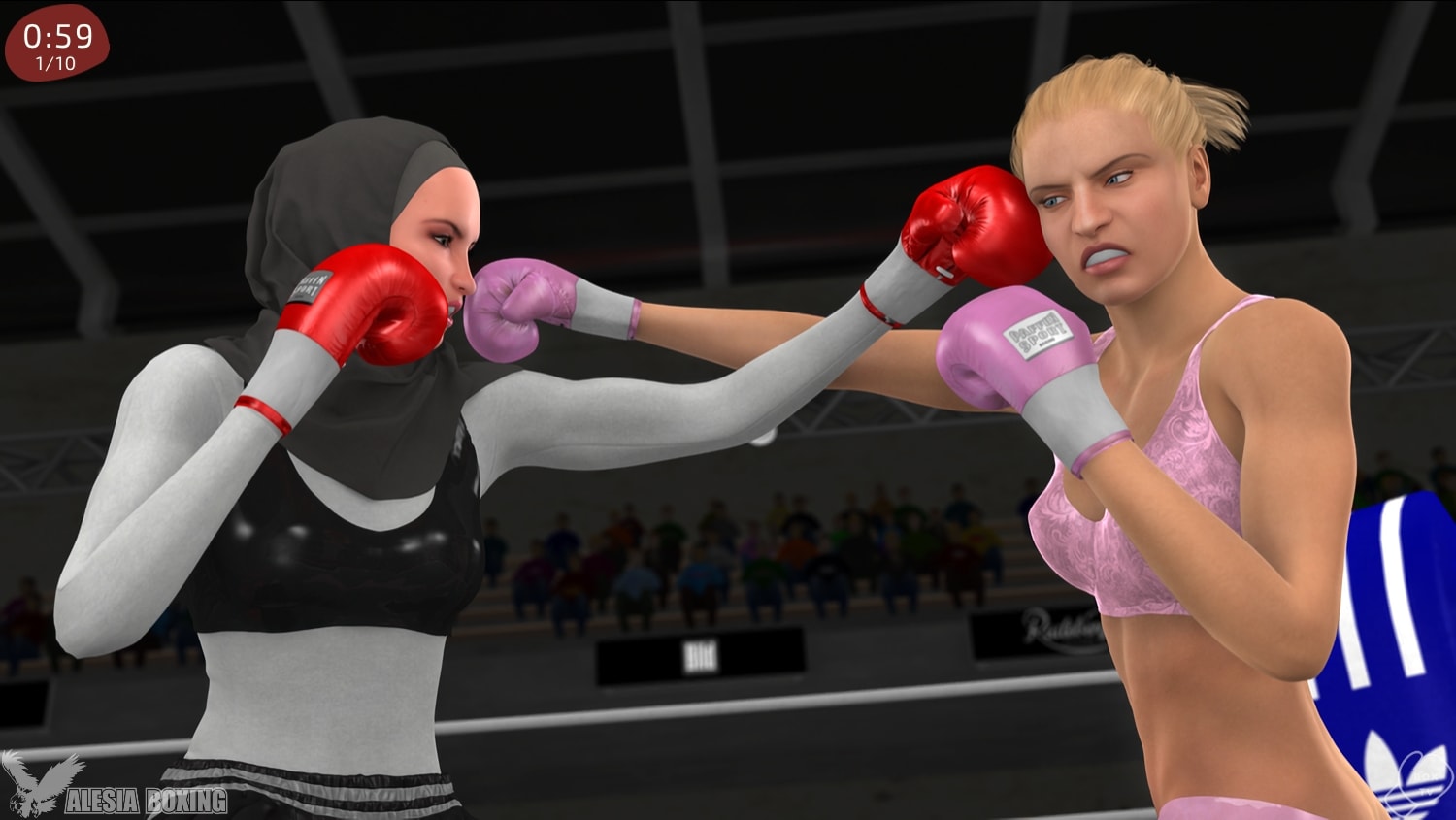 Anna stays on the back foot in that second minute. It’s a slightly painful experience as red leather comes in. In the meantime, Maxim reads Leyla’s movement from the red corner.

In the dying seconds of the round, the blonde falls back in a corner and stays captive as Leyla closes in. Will she bombard with a last flurry? 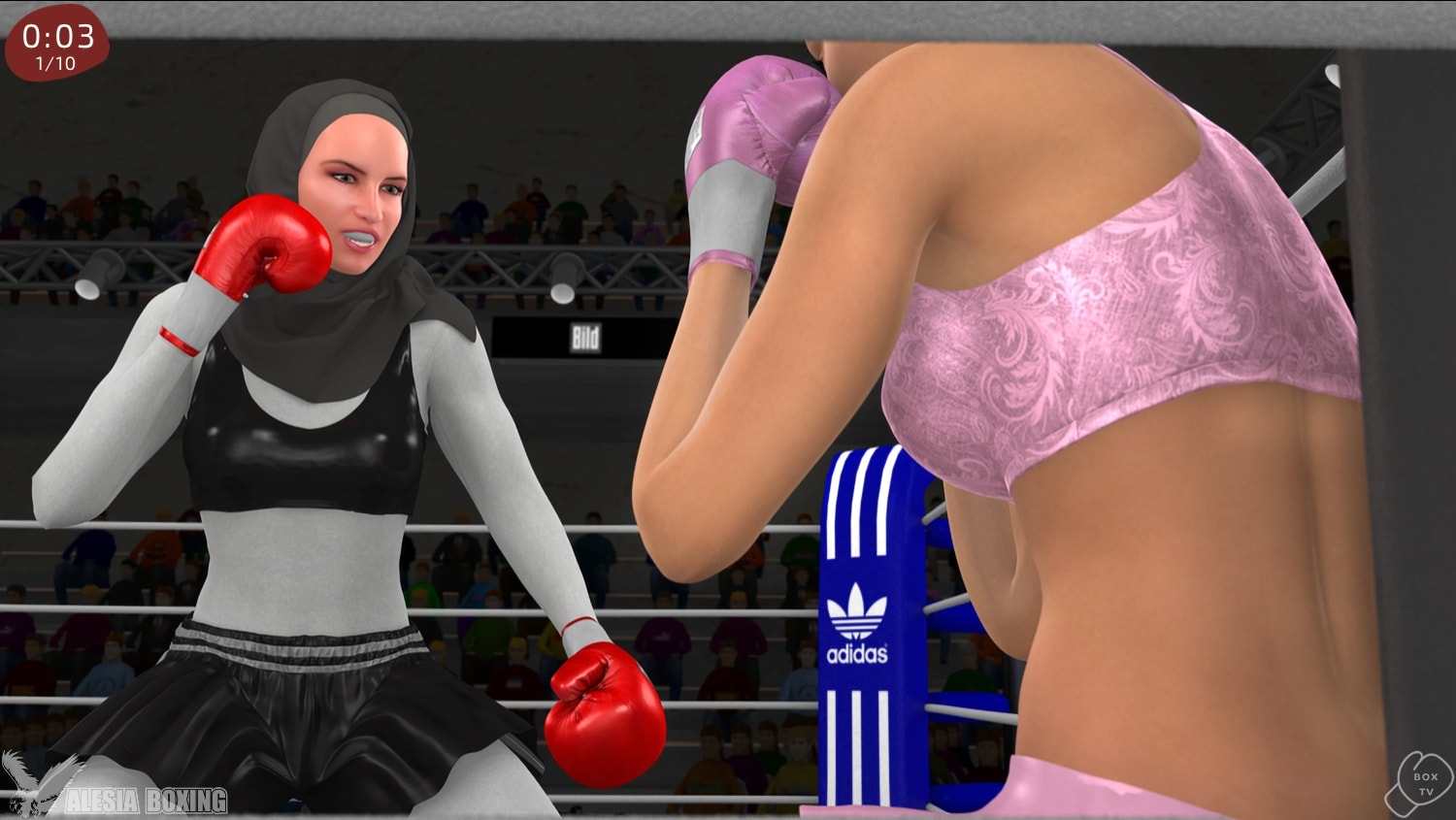 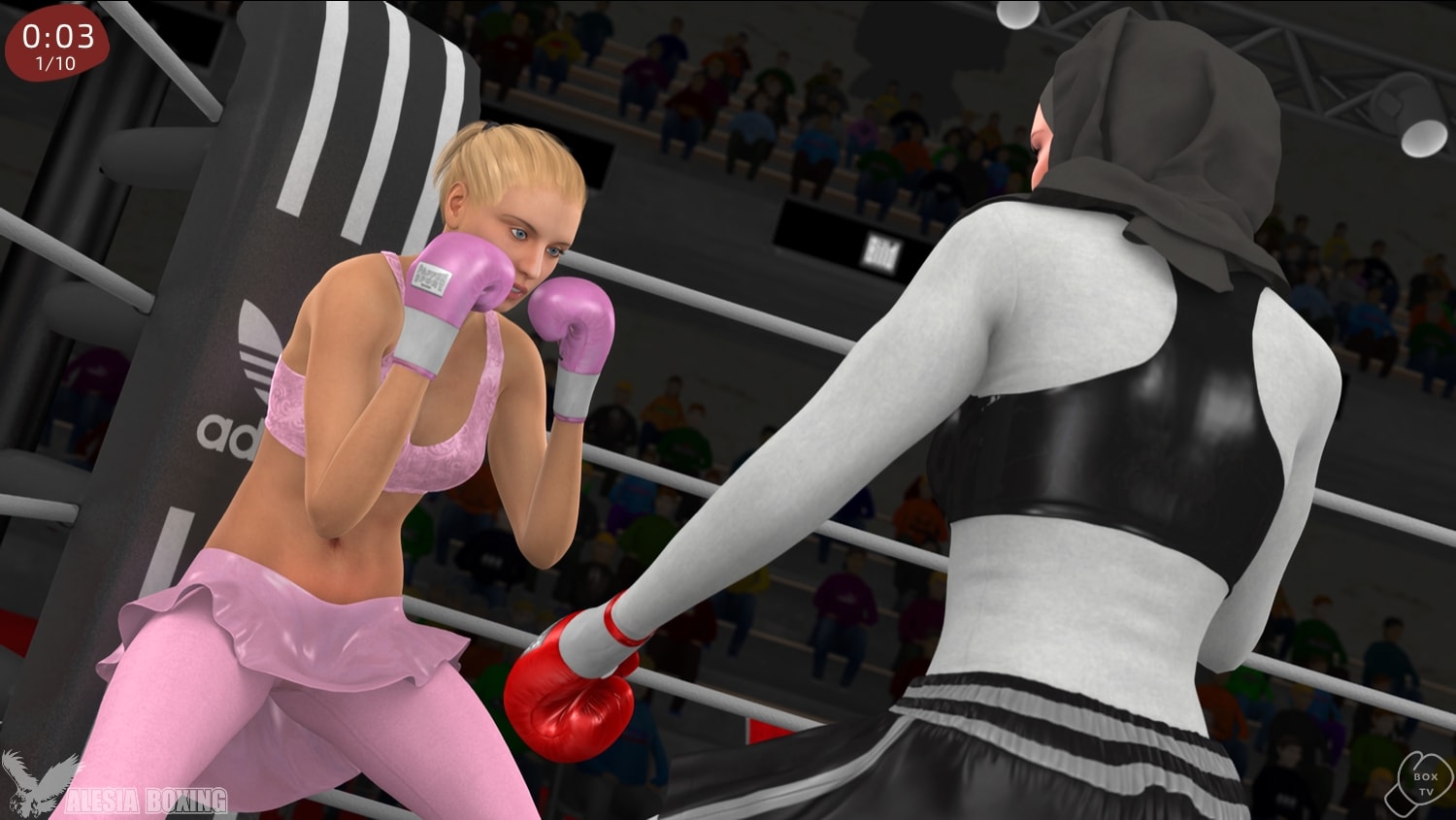 The Queen on ice

She does, by faking a jab and expediting a right hand in the blonde’s midsection. 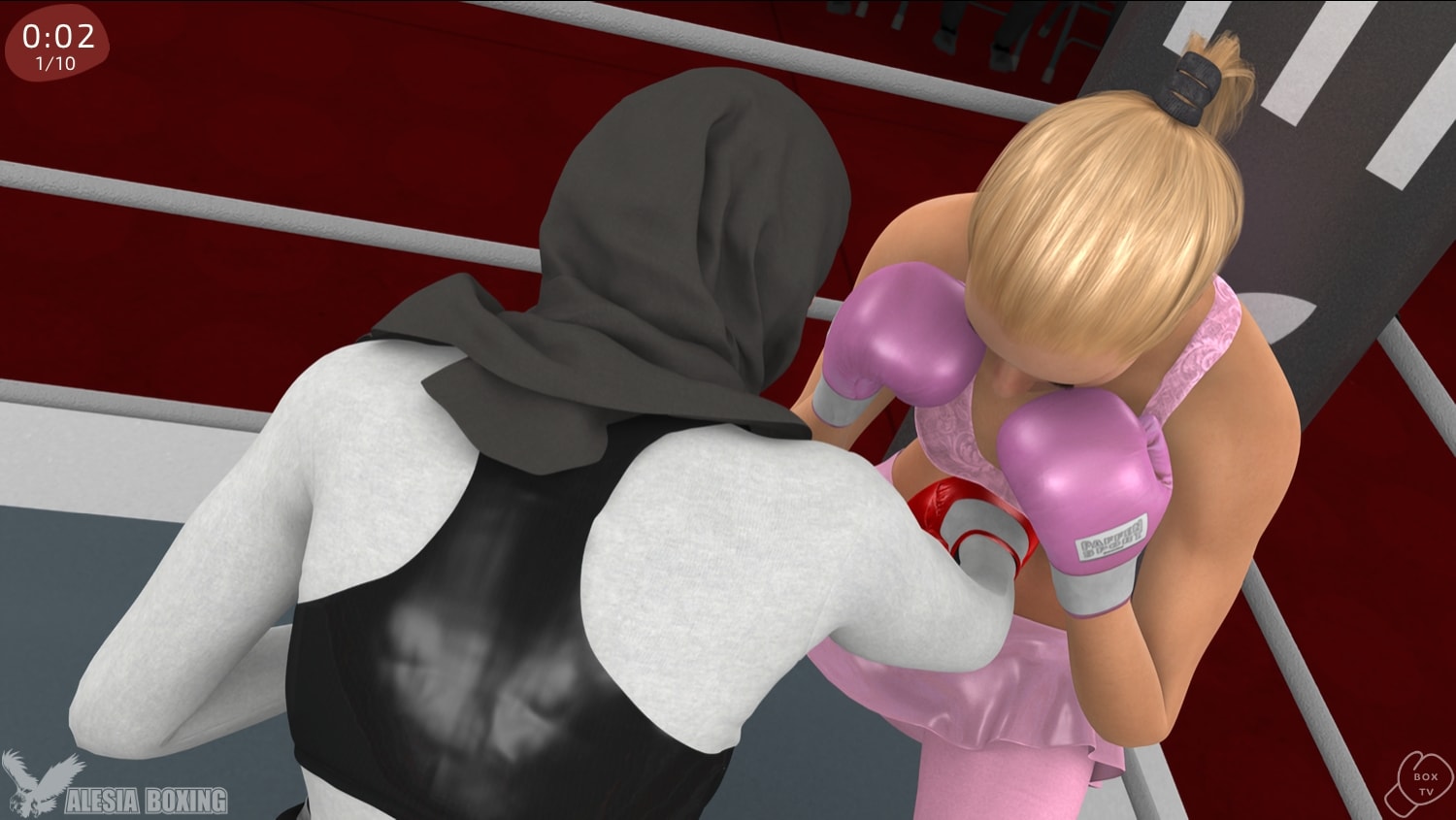 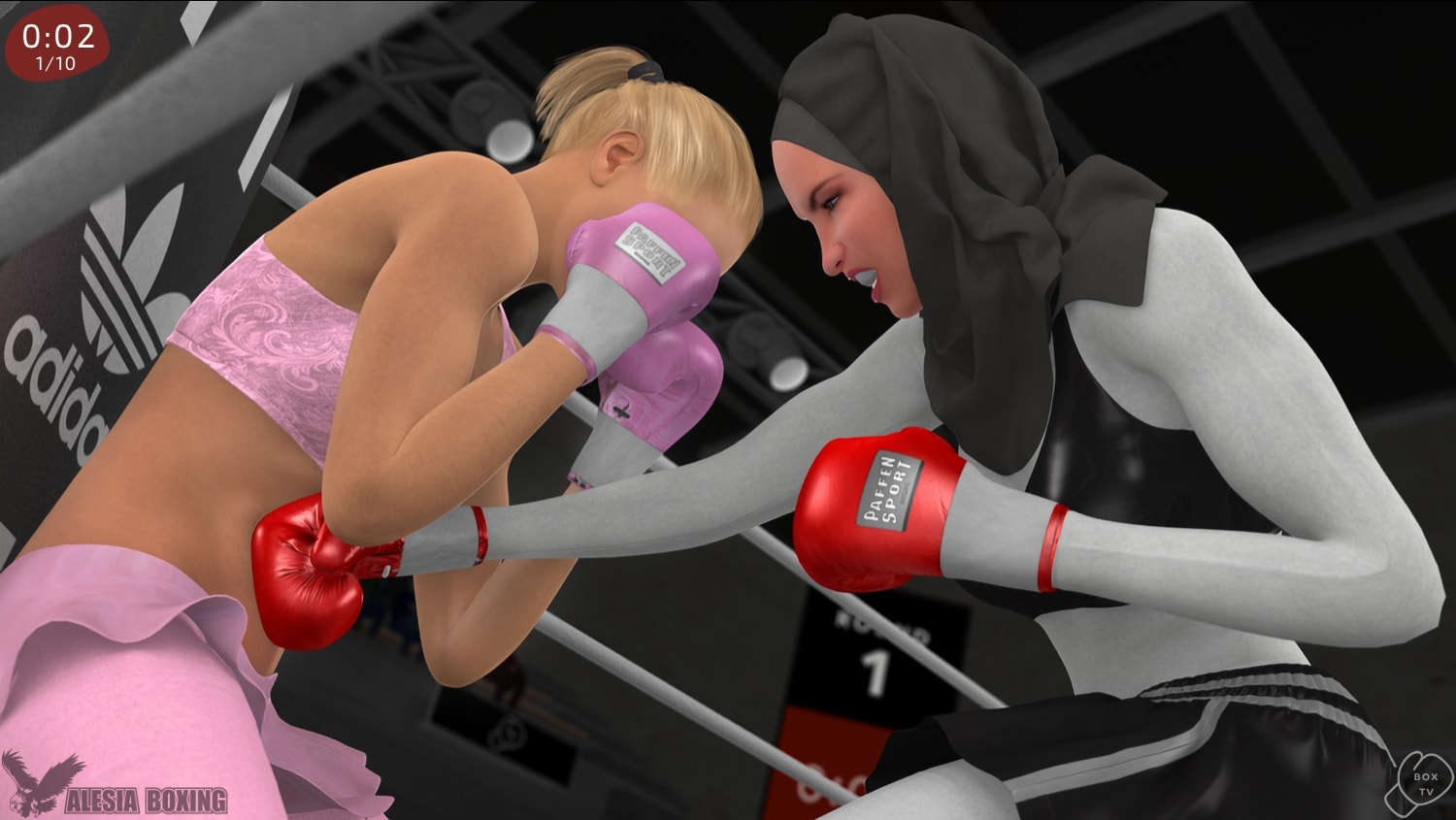 Anna keeps a high guard, which Leyla challenges confidently with an invasive left hook from below. It forces the Ice Queen’s right hand back and collides with her cheek. Pish! 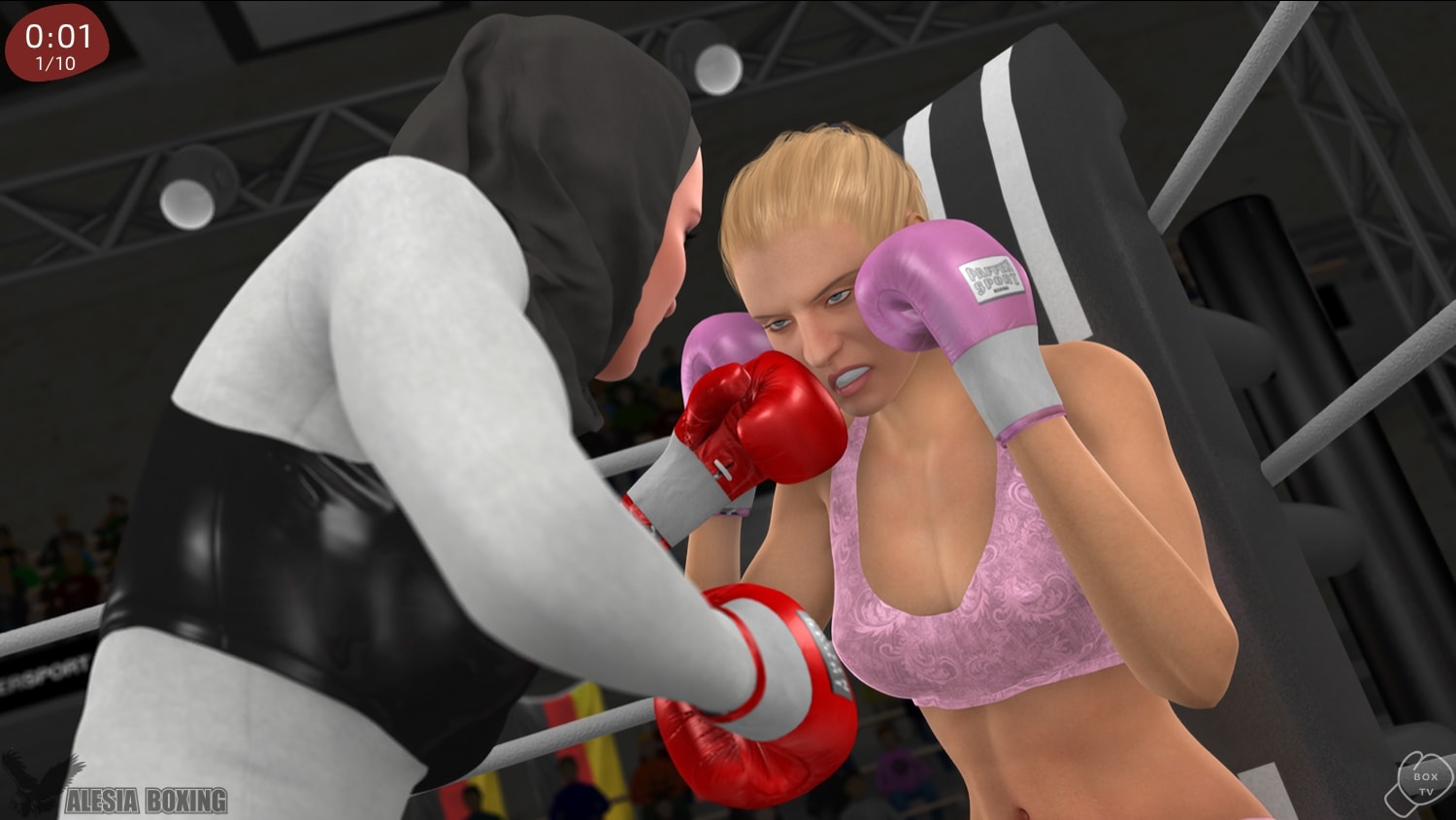 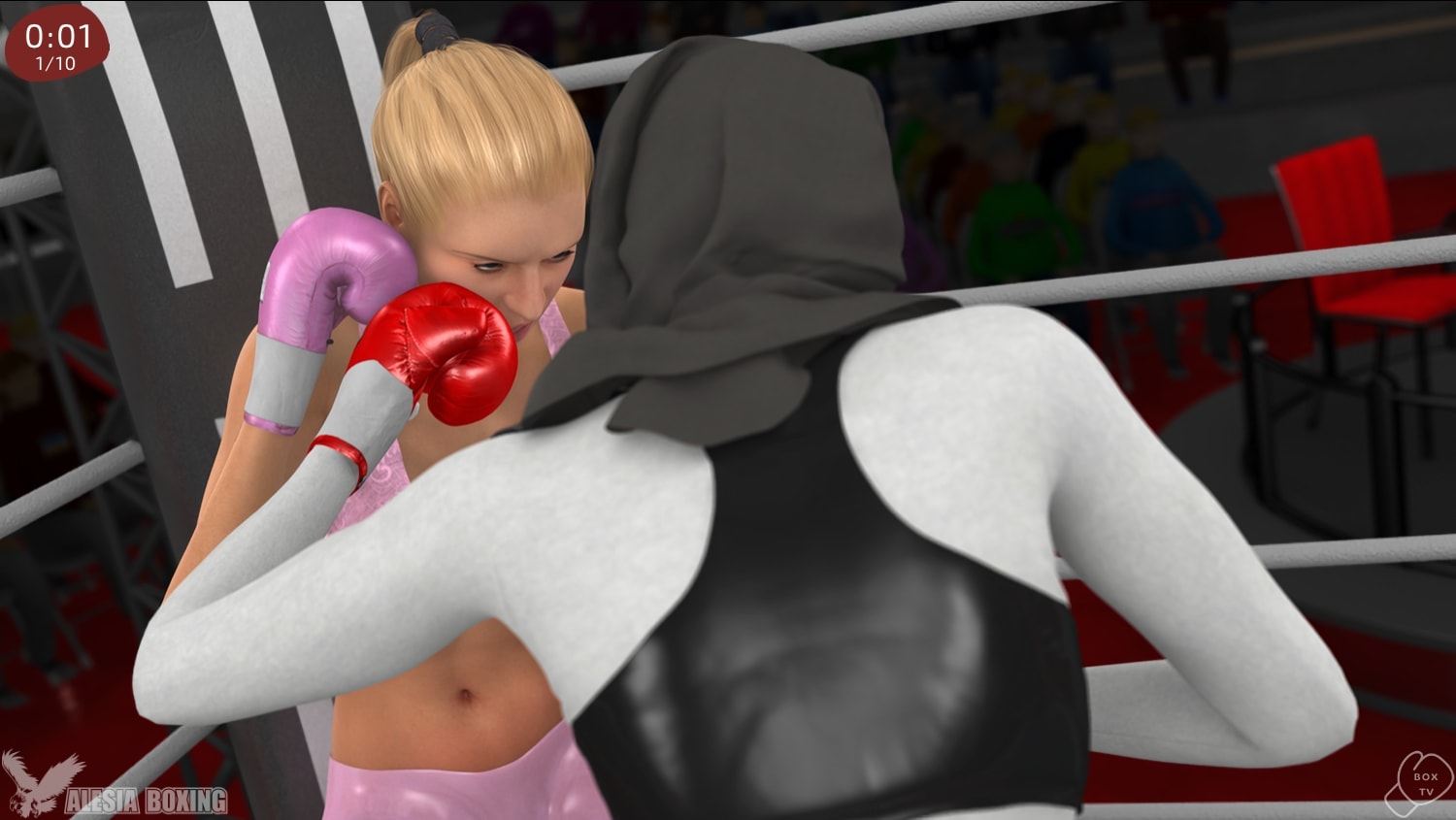 A second later, the bell rings and the crowd cheers.

Esther: “The opening round is already in the books and it has Leyla Abdul’s name all over it. Her gloves were all over Anna Schwartz, who will have to kick into high gear in the second round to avoid letting the gap grow.”

What will the coaches tell their boxers? We will find out in the next post.

Sandbagging to earn a match 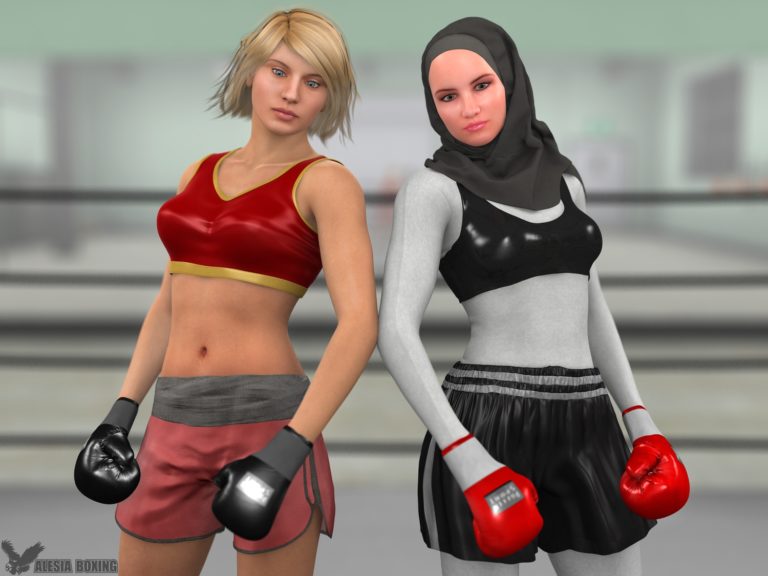 Setting up the trap 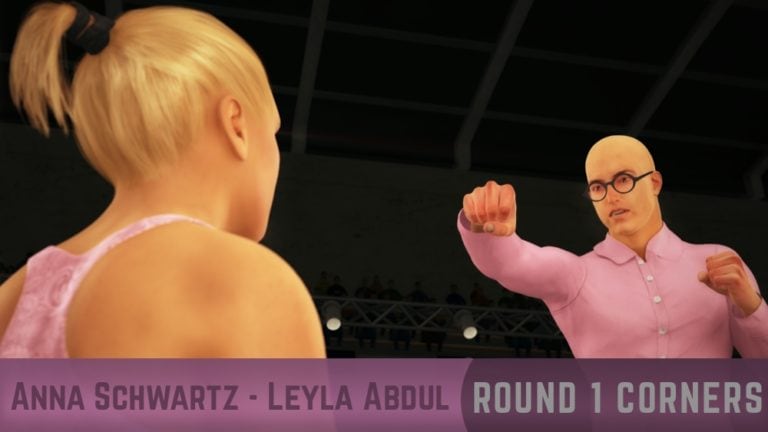