The war effort resumes in Round 6. Lovely Leyla starts on the front foot to stage fierce resistance to every effort made by her opponent.

Anna, her Berliner counterpart, doesn’t compromise either. They start trading in the middle of the ring, with exchanges that go back and forth. The crowd gets animated as you would expect.

At ringside, a certain number one Super Lightweight is a bit worried.

Alesia thinks: “This is always fun to watch, but no one can get hit like that forever.”

More than a minute into the round, the Diva’s concern is proven correct. Unfortunately for her, the boxer she loves gets battered by red gloves.

Anna is chasing Leyla in parallel to the ropes, coming forward and throwing a right cross. The younger Muslim changes directions for a counterattack executed to perfection. She evades the right hand by pulling back to the left, replying with an overhand right cross that leaves no room for interpretation. The red glove smacks the Ice Queen’s jaw. 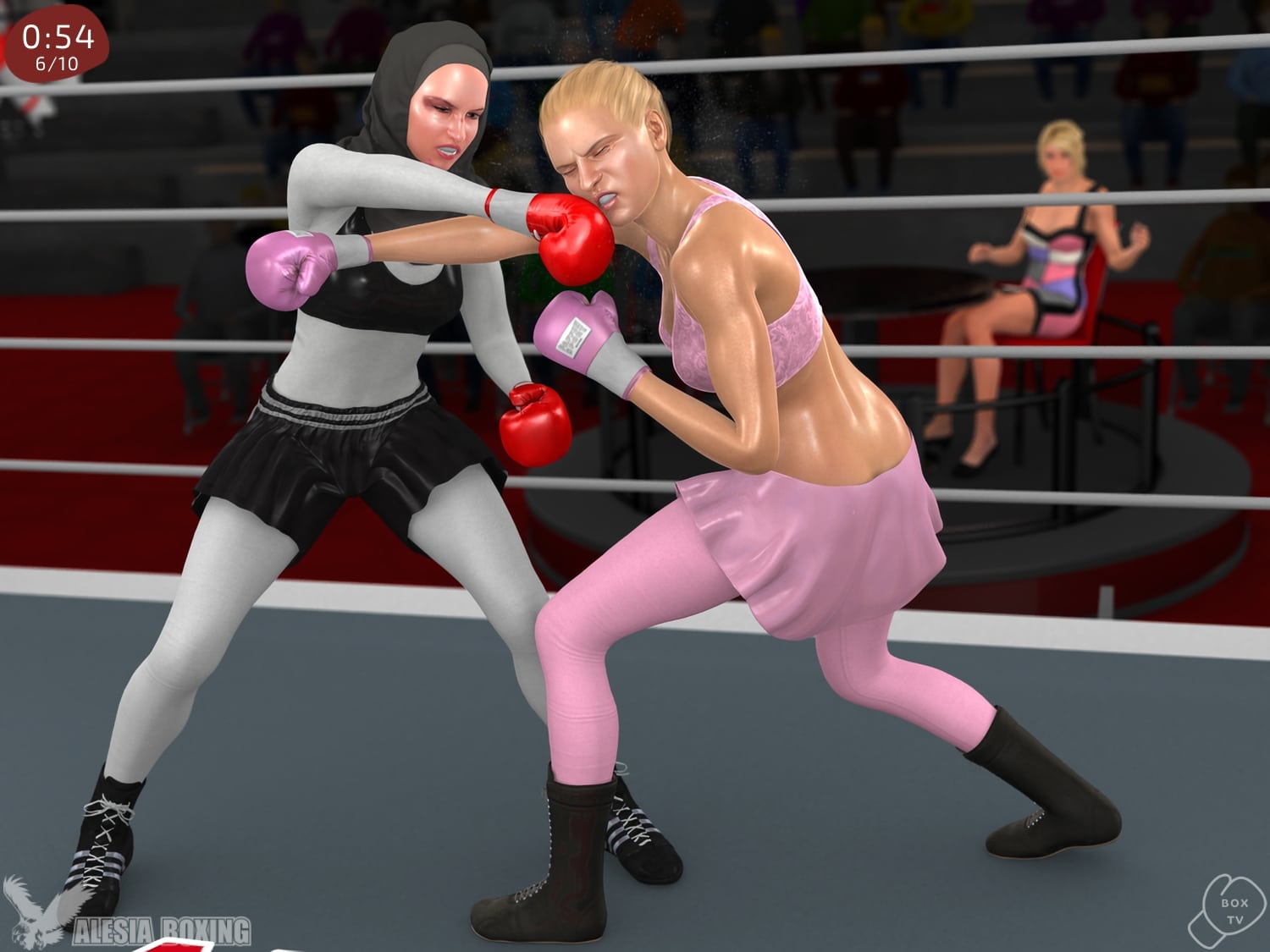 Anna stumbles back and tries to go away. Leyla’s inner hurt fighter detector rings, so she goes after the newly defensive blonde. A couple of seconds and a few darting shots later, the lady in pink gets caught by a huge right hand as she tries to sidestep to the left. The gloved fist crushes the middle of her face and sends her head back sharply.

Esther: “Abdul’s punches turn devastating after a decisive right that gave her a clear advantage. She has killer instinct after hurting Schwartz, who scrambles to find a way out but cannot see the exit. There’s none in the boxing ring. If you dash, you get smashed.” 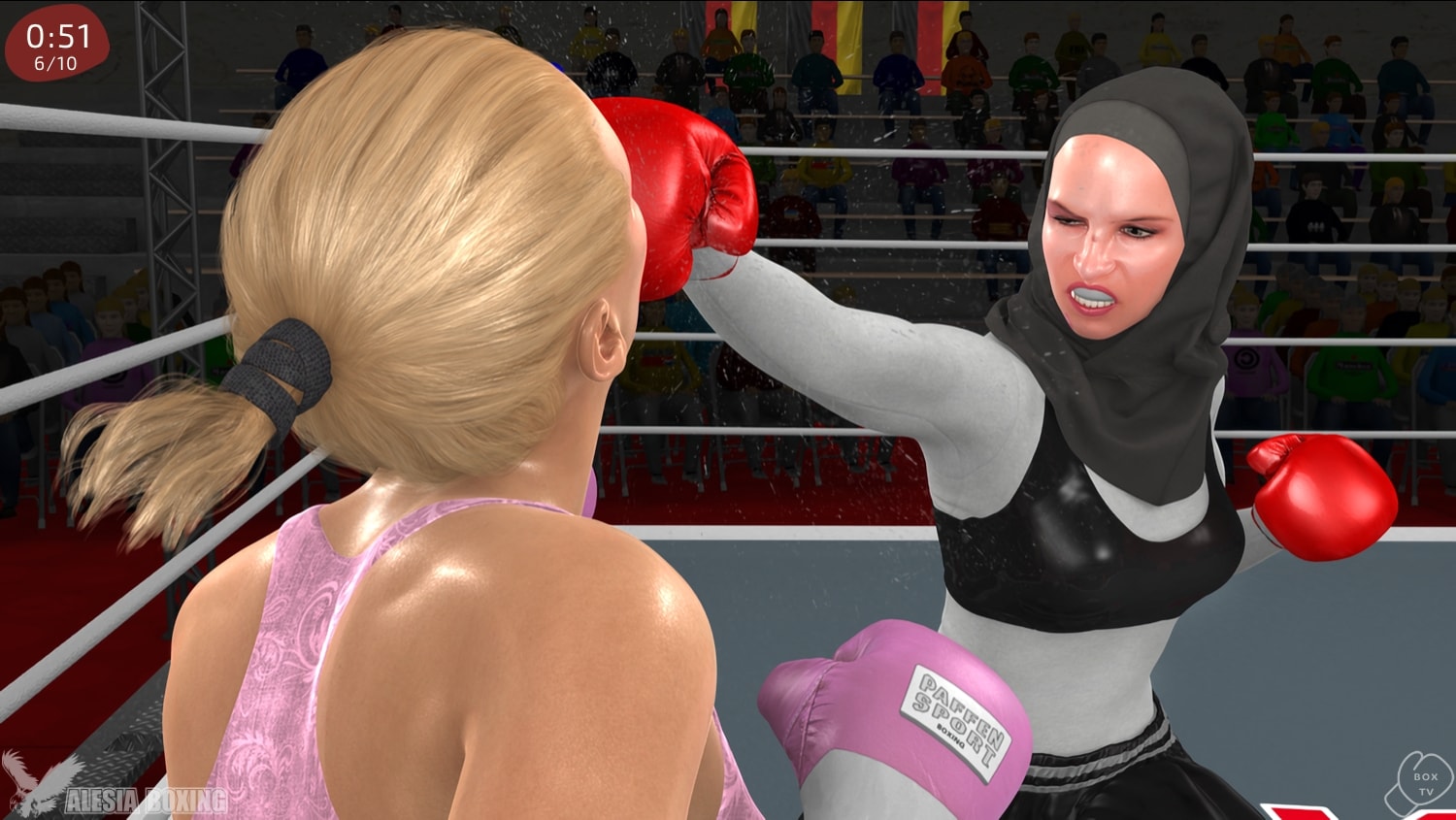 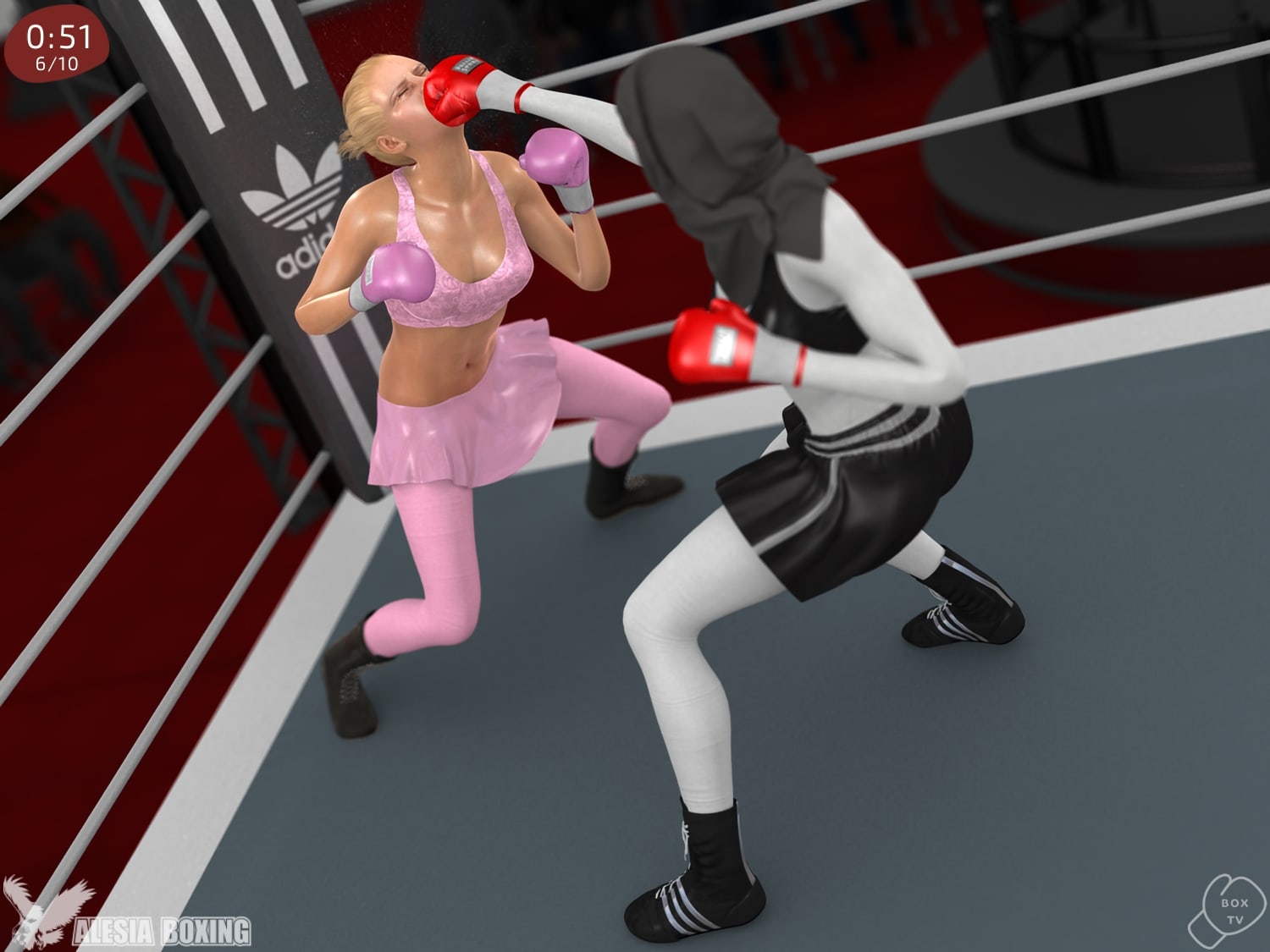 Esther: “Schwartz goes down! She falls on the canvas, perhaps intentionally to avoid taking a shot that would do even more damage. Leyla Abdul will probably take a lead on the scorecards after imposing her will in this Battle of Berlin.”

Anna’s fans are in distress, screaming for her to get up despite the pain she is in. So is a special guest at ringside. 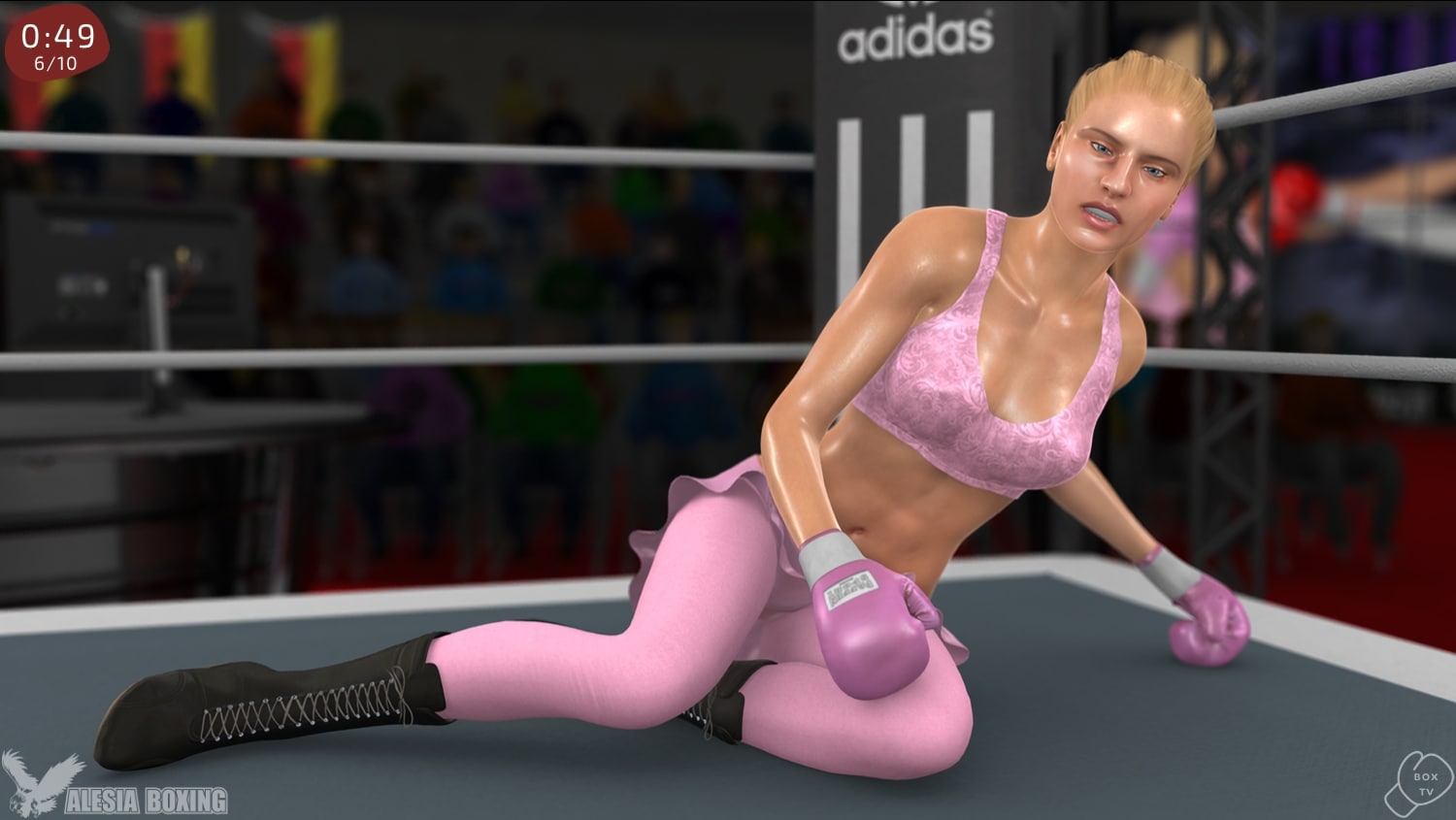 The lights aren’t out in the Schwartz house as the referee, Zelda Deniz, gets close. The blonde stays down to listen to the mandatory eight-count.

At the other end, Leyla leans back against the corner pad as she takes in the cheers from her fans.

Esther: “This is Abdul’s moment in the spotlight. She is shining after knocking down the most reputable opponent in her professional career, rightfully smiling as she may have one foot in Victoryland.” 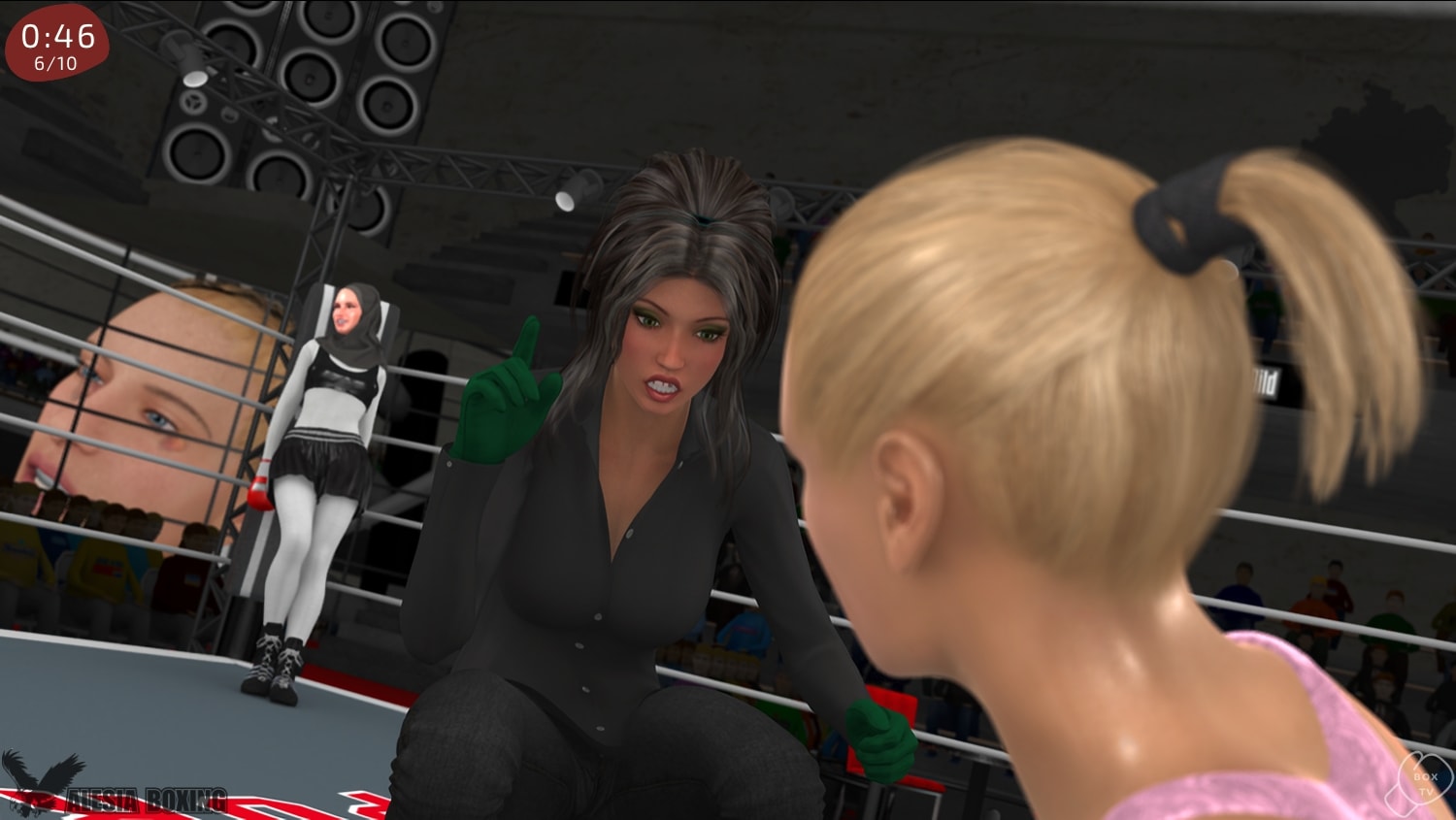 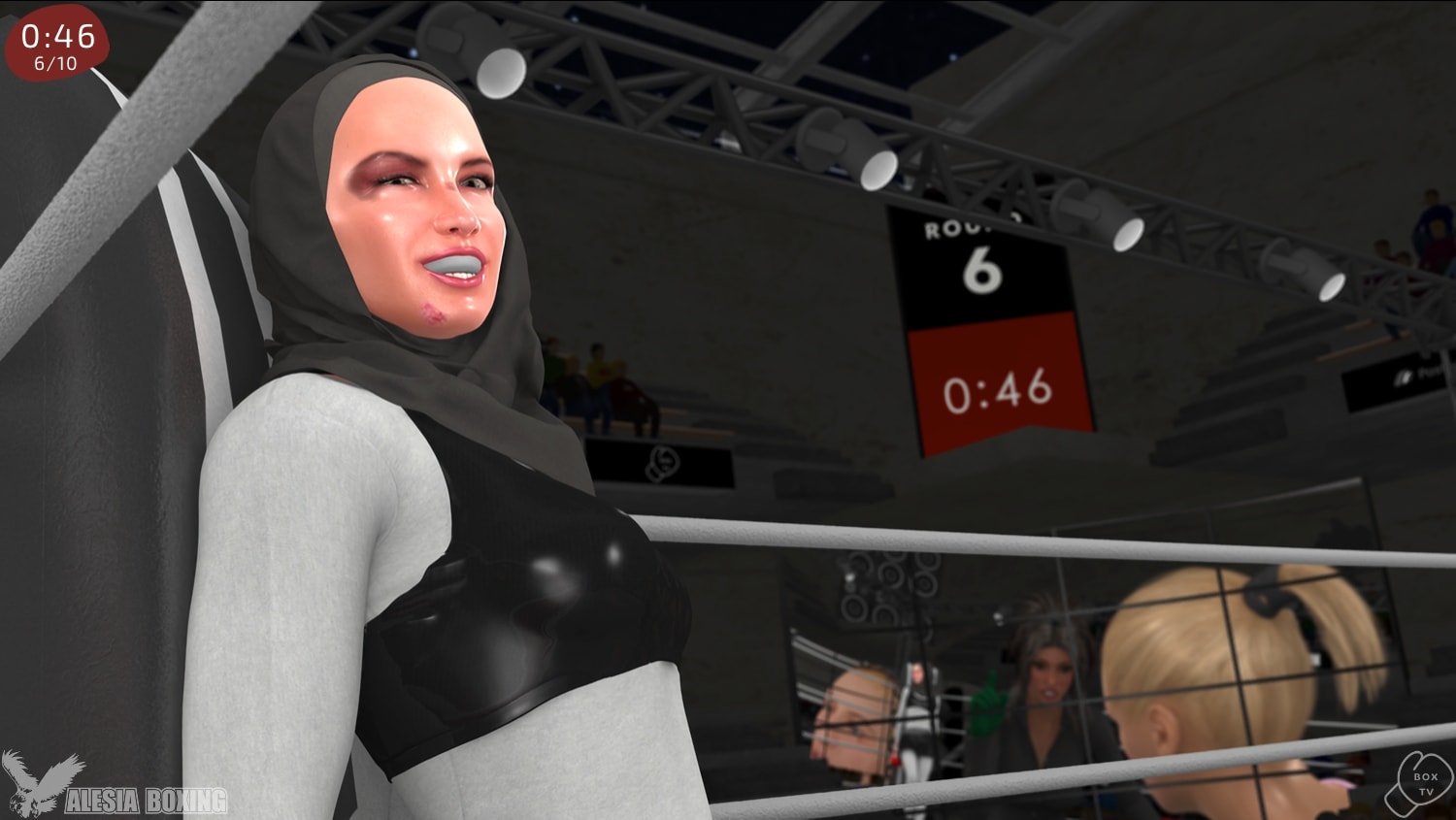 Zelda completes her eight-count with Anna up to her feet and apparently eager to continue.

Esther: “As most viewers may have suspected, Schwartz wasn’t fatally sunk by the knockdown, which probably bruised her nose, lips and ego more than anything. Can she get back into this fight after going on the ground, though?” 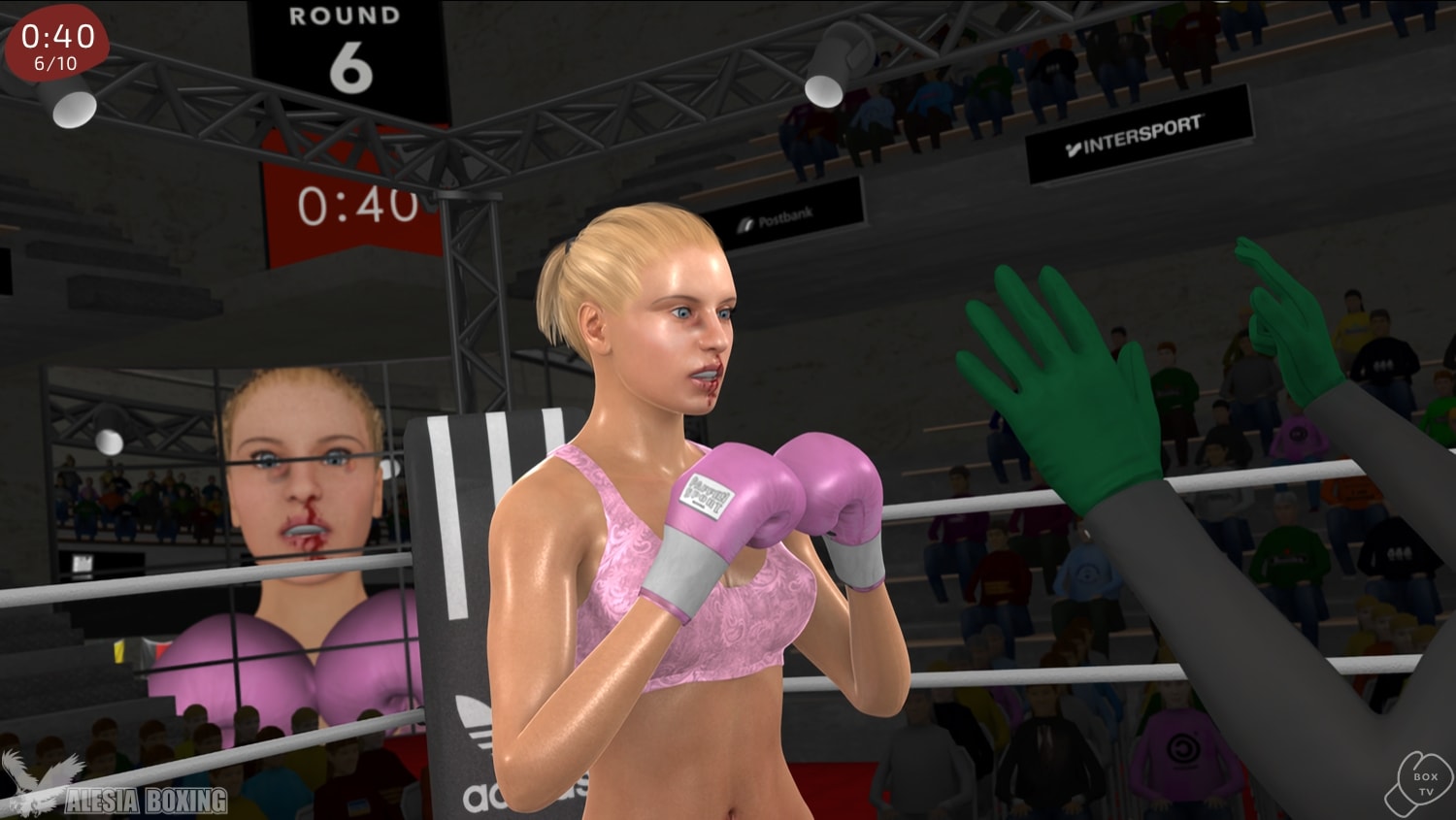 The audience rapidly gets a sense of Anna’s resolve. Seconds after the official orders the two ladies to box again, Leyla’s attempts to get close meet aggressive flurries that force her to step back and stay away. She can’t make inroads before hearing the “clack clack clack” that signals “10 seconds left”.

The Ice Queen wants to send a message late in the round. She steps on the gas to counter when Leyla initiates a motion for the right hook, coming inside with a left hand that combines the speed of her jab and the upper body torsion required by her coach. PISH!

Esther: “Schwartz will not win this round on points, but she will win hearts by being absolutely fearless with a splendid push-back in the last 30 seconds. Just as she did against Lena Löw, she refuses to roll over and play dead.” 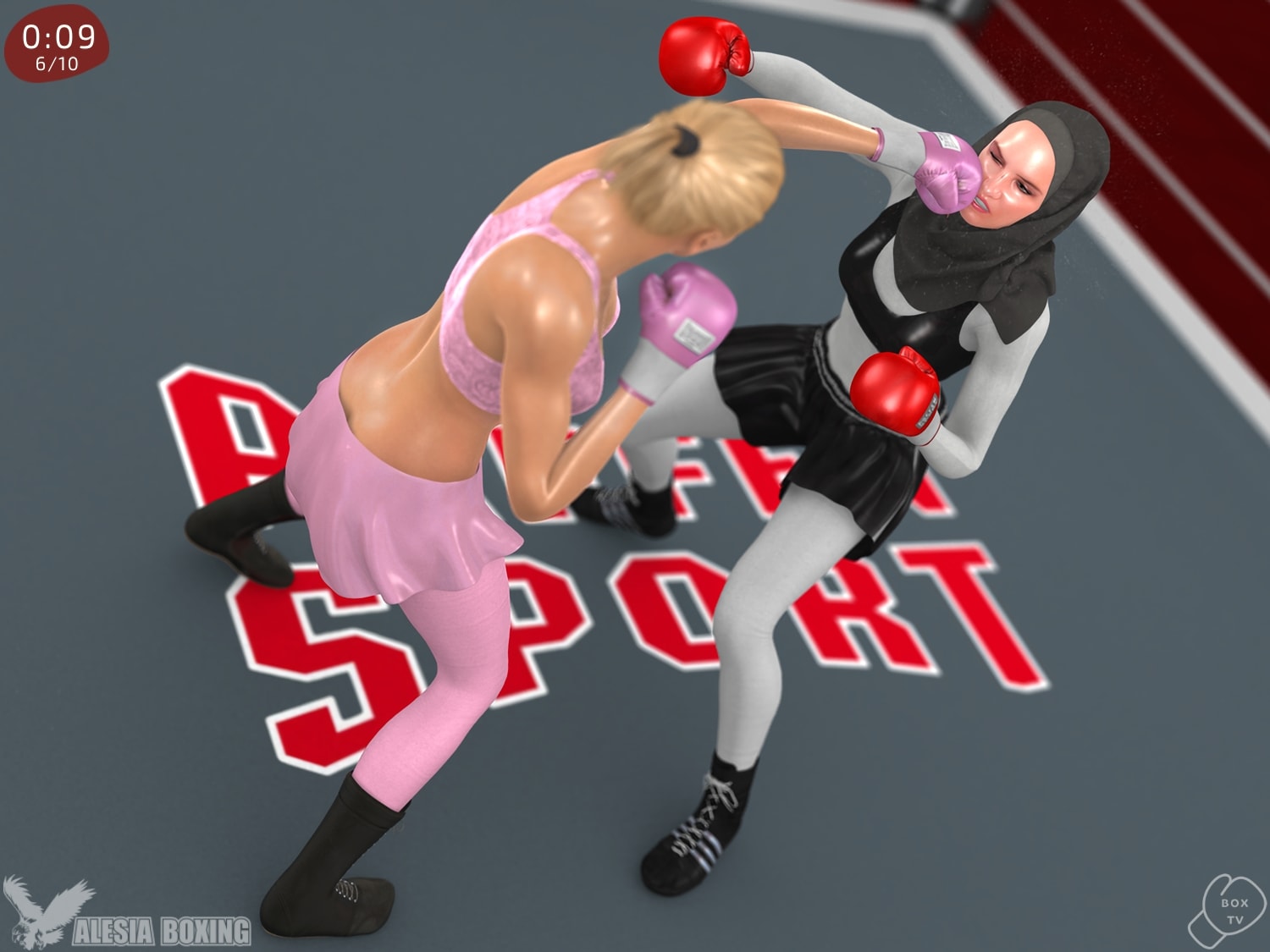 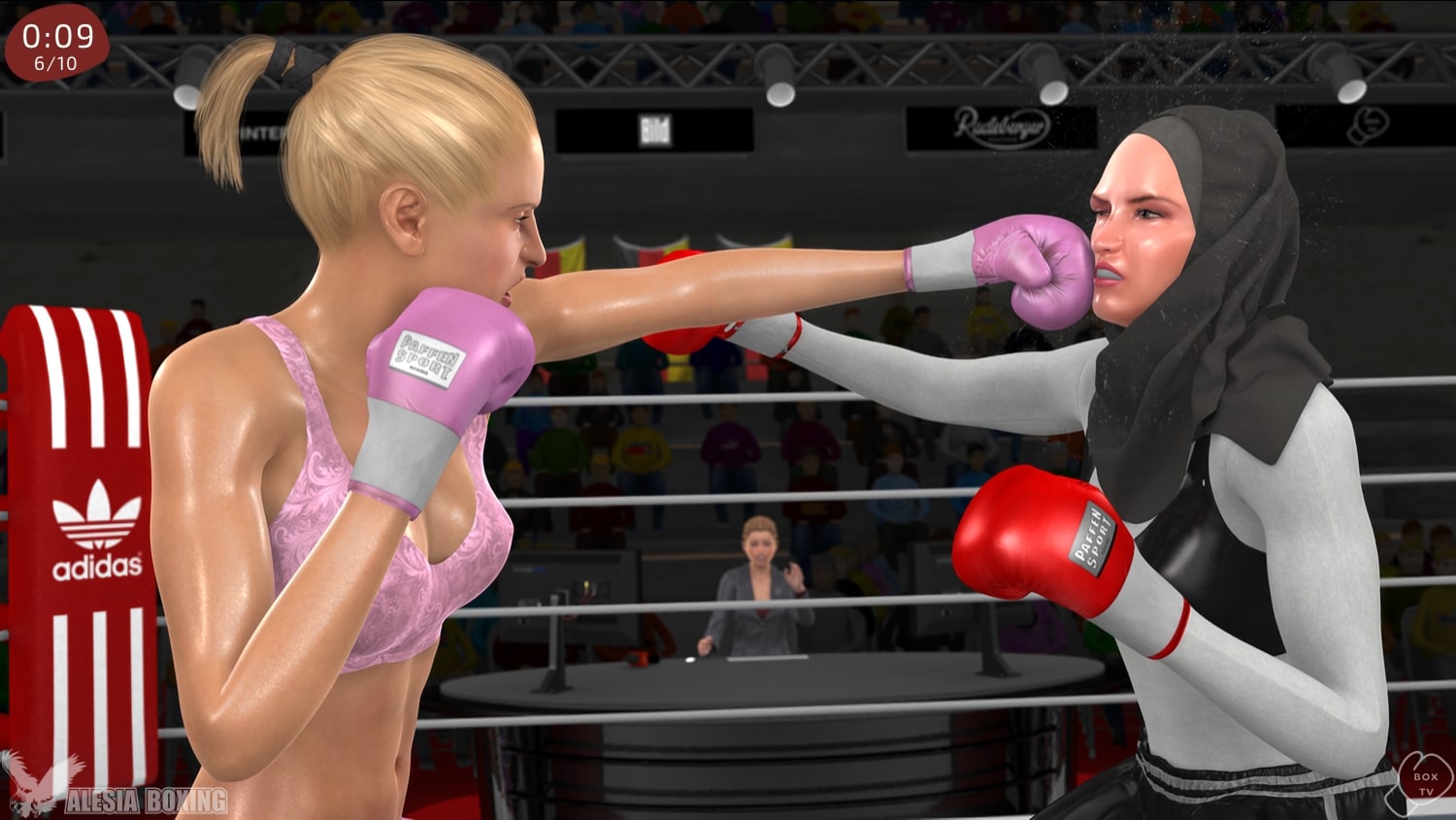 The blonde bomber receives Maxim’s congrats for a never-say-die attitude. The coach uerges her to remain aggressive while trying to minimise mistakes. If she does it well, she can get even. For her part, Leyla is told by Caspar that she must keep Anna under pressure, as the second part of Round 6 has shown her ability to fire back.

The best move of the round comes at 1:17, when the covered girl makes a few feints before stepping into a left hook effort. The Ice Queen pulls out and answers with an unusual overhand left that crunches Leyla’s left cheek. PAFF!

Esther: “From the offensive to the counteroffensive, Schwartz probably is reacting as well as a boxer can after getting knocked down in the last round. She is avoiding mistakes and serving up punishment whenever she has a chance.” 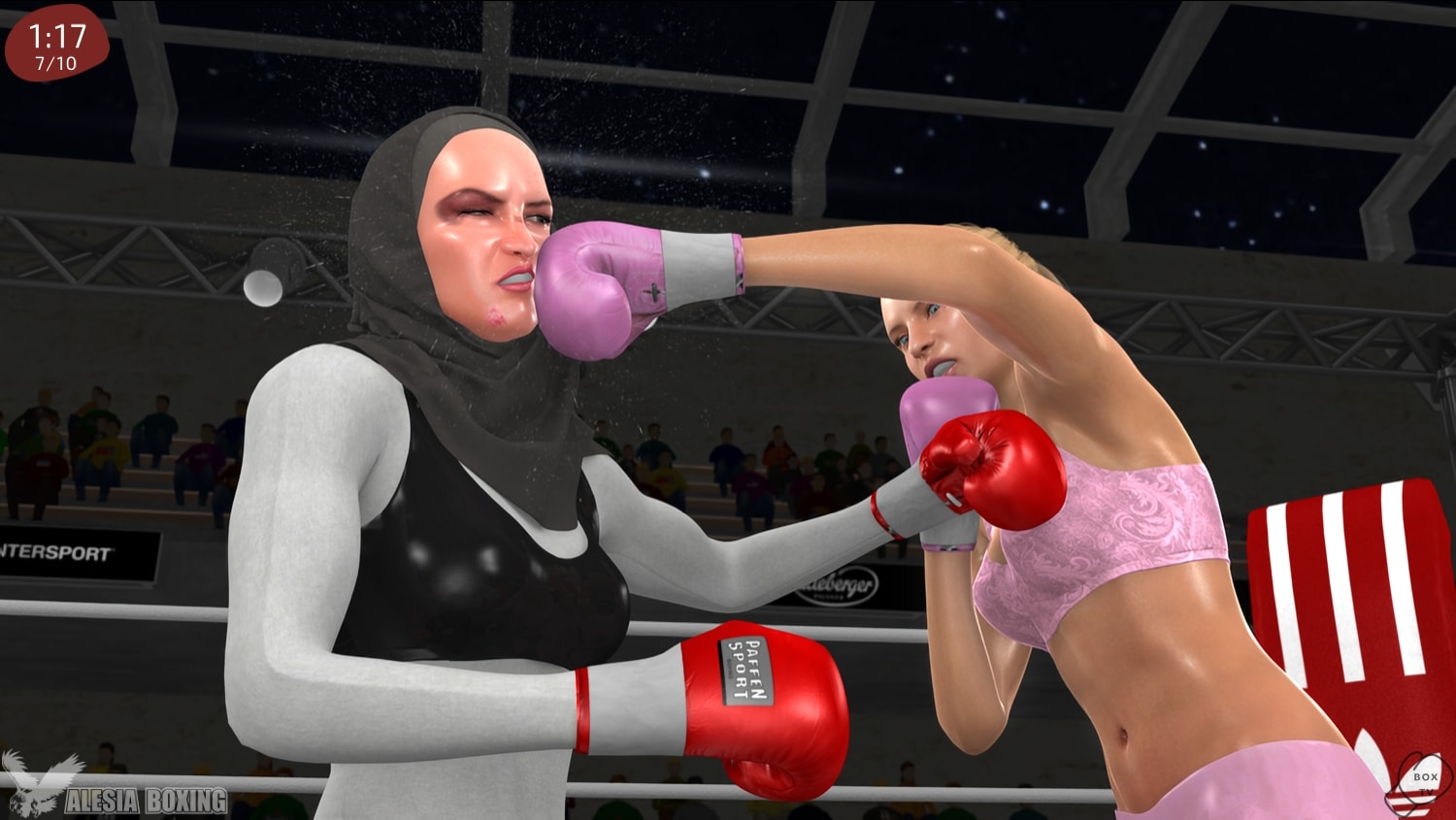 Leyla tightens up her game in the following round. She alternates between the Philly shell and an orthodox stance to make her moves harder to guess and defend more conservatively. The woman in black and white also does less mindless attacking, favouring going in and out of exchanges more unpredictably.

As a result, she is more successful at landing clean shots while Anna tries to solve a more puzzling game. 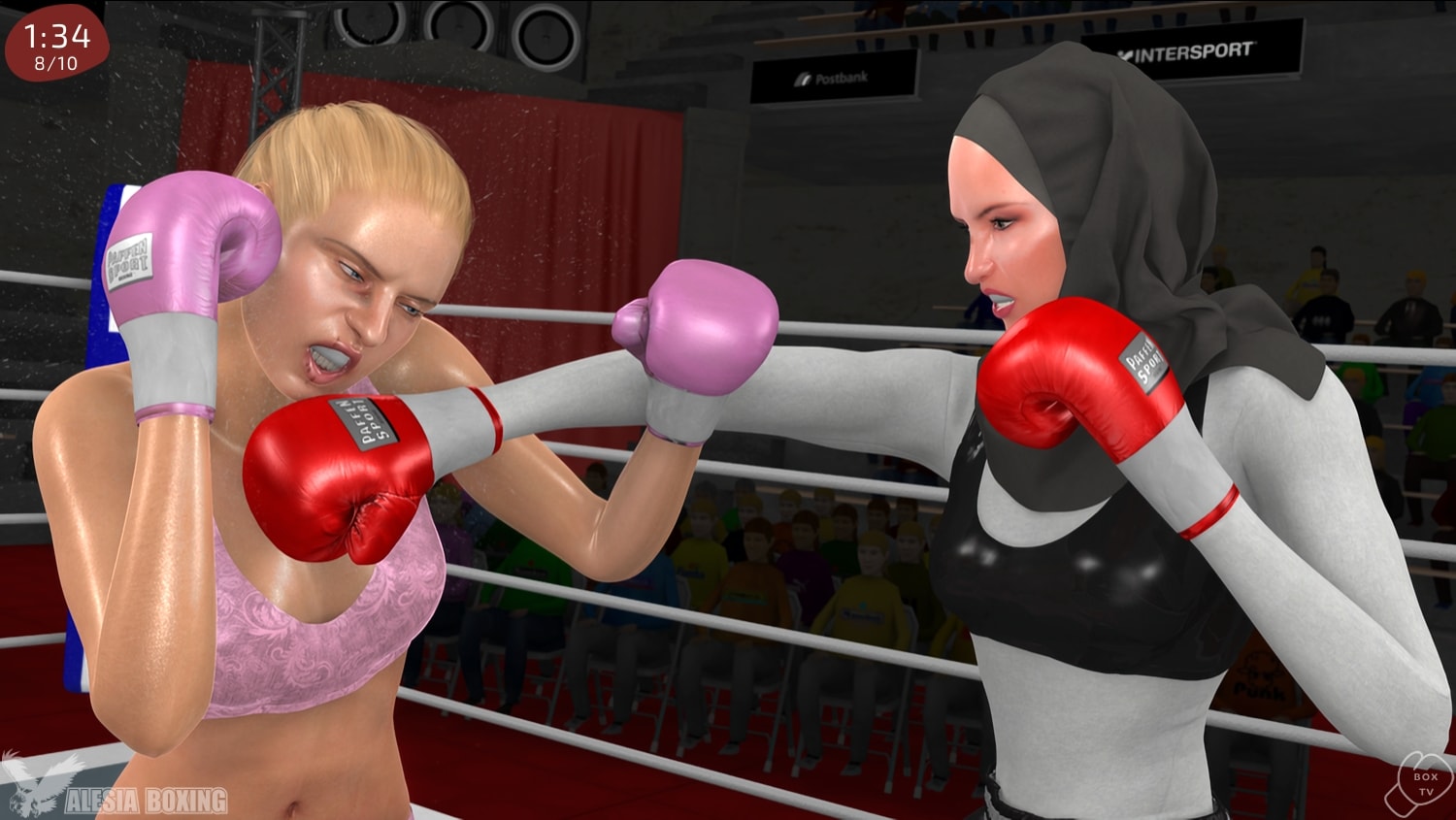 This scheme works well for The Volcano until the mid-point in Round 9. The two pugilists are thinking of attacking at the same time. Leyla drops her right hand slightly before throwing a cross. Anna jumps into the fray, going in first with a cross that sweeps the lower part of her opponent’s face. A stunning power shot on target.

Esther: “Schwartz scores with a big right! Perfect timing to beat Abdul to the punch with a powerful cross that’s just a split second faster than her own hand.” 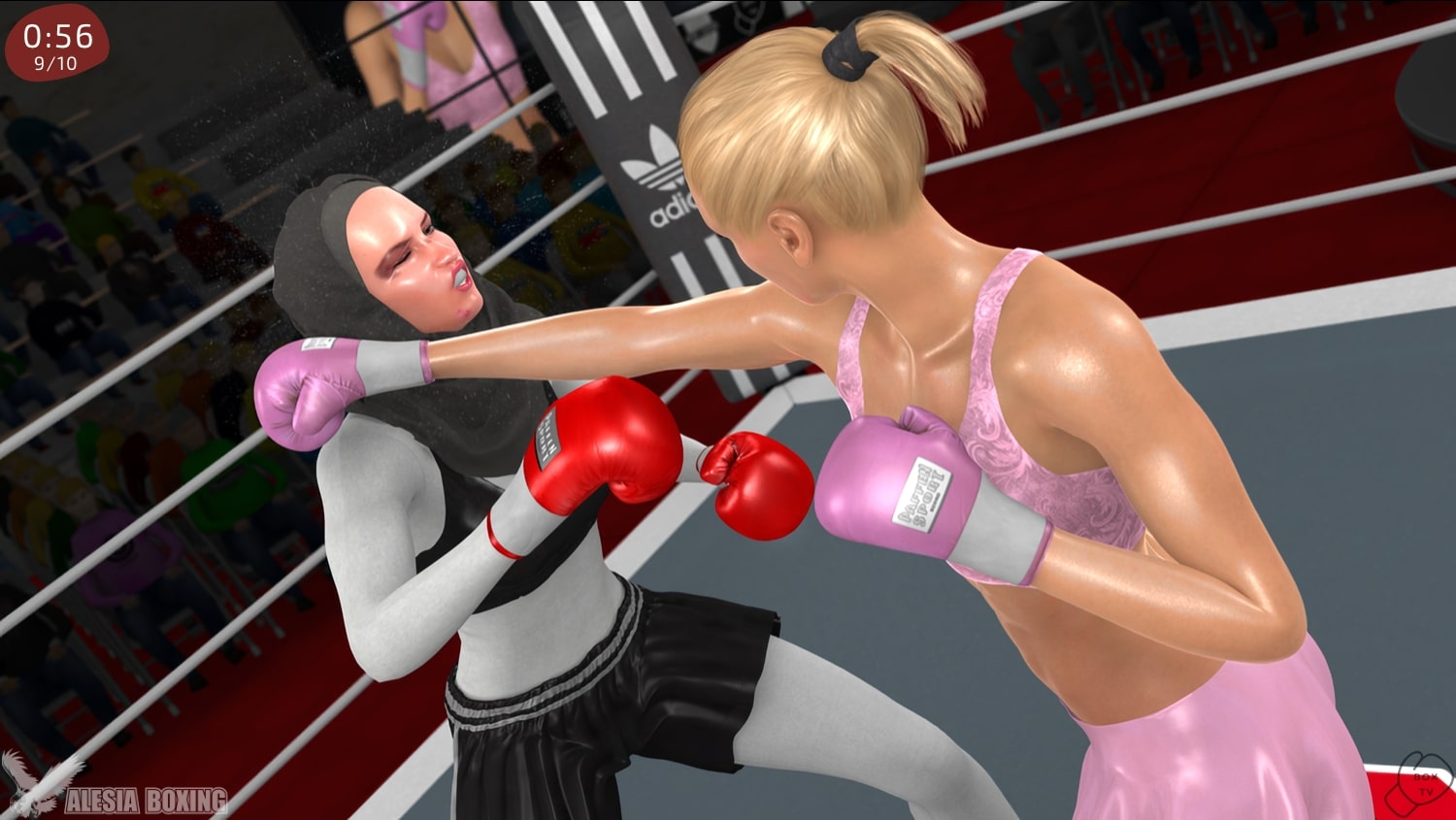 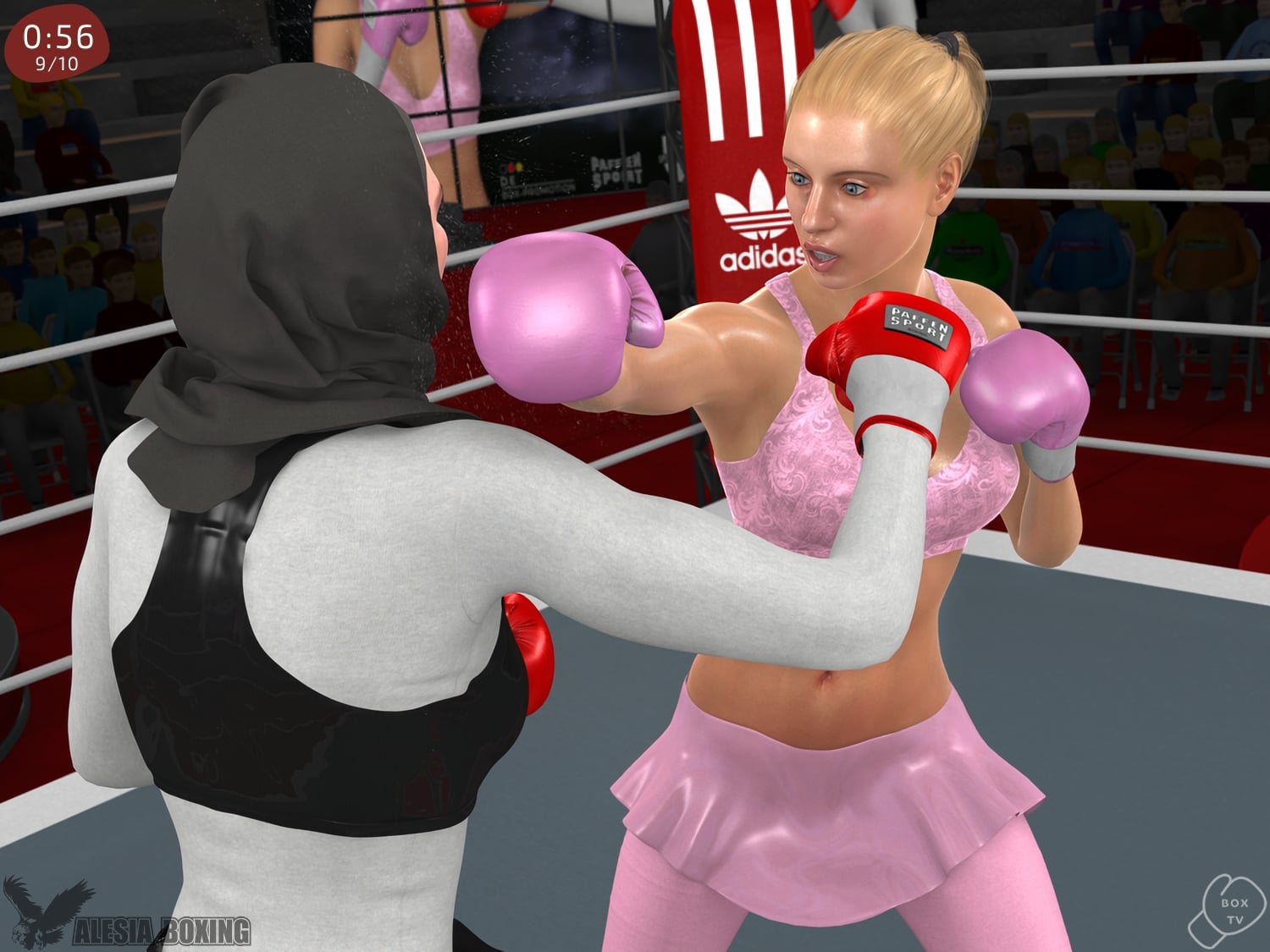 Leyla isn’t only stunned. Her legs lose coordination and strength, making her fall on her butt. Her coach Caspar facepalms since this cancels out the advantage she took earlier in the fight, and the crowd cheers the continuation of this intense session of mutual violence between the two boxers.

Esther: “Abdul is down! Speed kills in boxing, and Leyla Abdul now pays the price for being only a bit slower overall than Schwartz. The cross that came across made her cross-eyed for a moment. Now she has to pick herself up and keep fighting in something tougher than a cross-country race.” 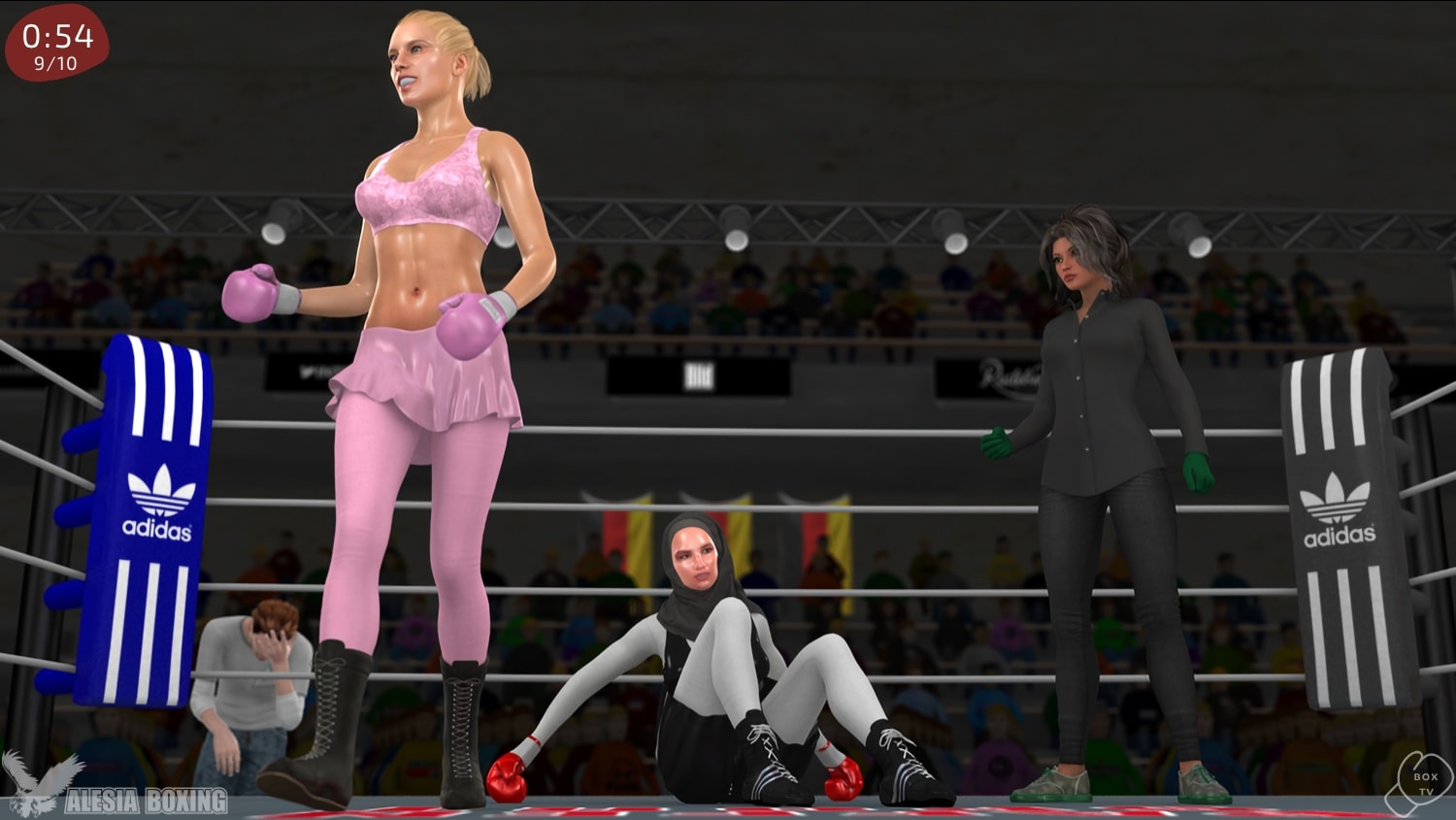 Hurt but not crushed, Leyla gives herself seconds to make sure she isn’t too dizzy before getting up as Zelda’s voice and fingers start from zero and reach eight. At the end of it, she confirms that she’s ready to continue without looking too dazed.

In a neutral corner, the Ice Queen grants herself the right to make a confident supermodel pose as a reward for her effort.

Anna thinks: “I came right back into this one, didn’t I?” 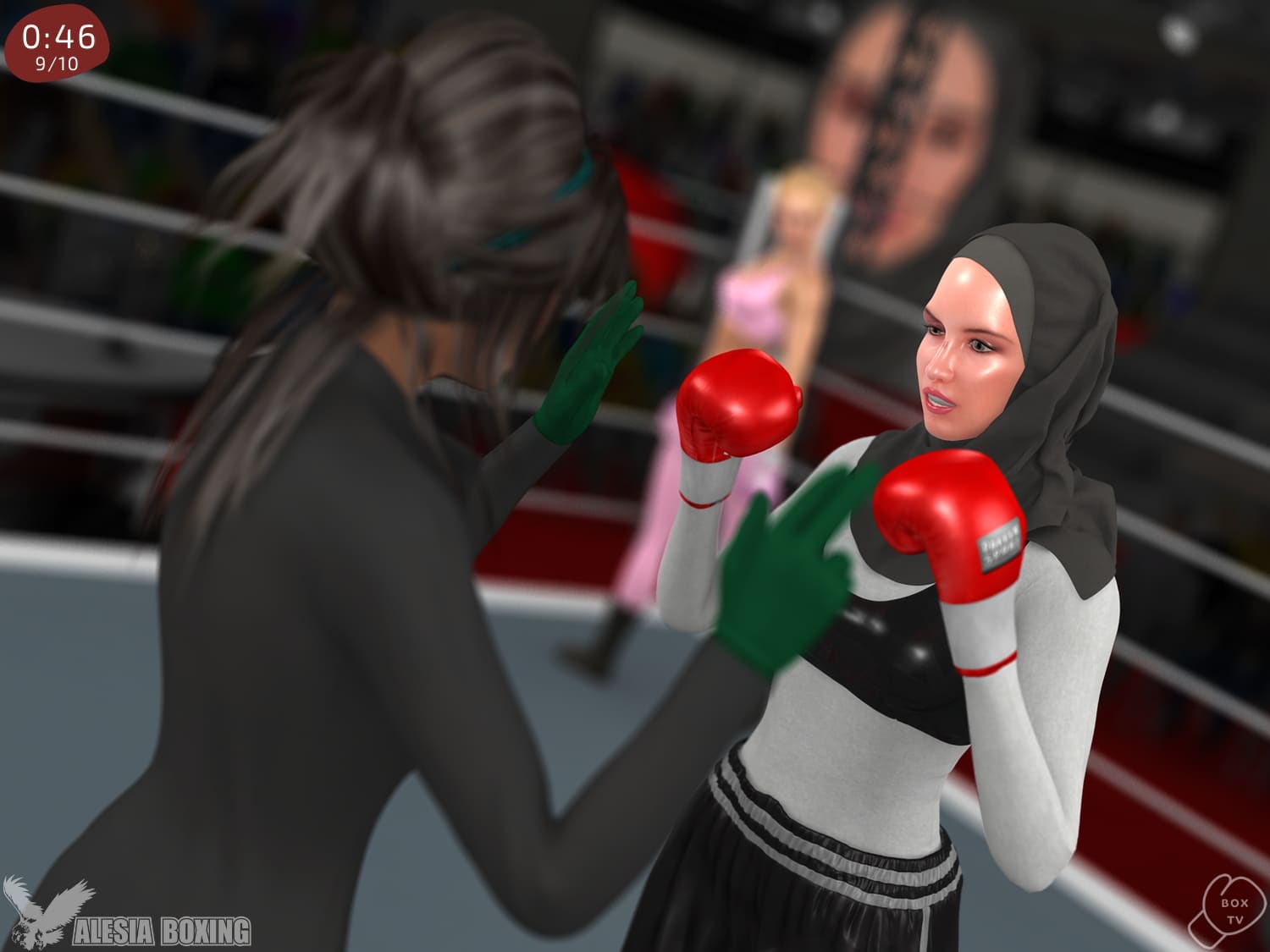 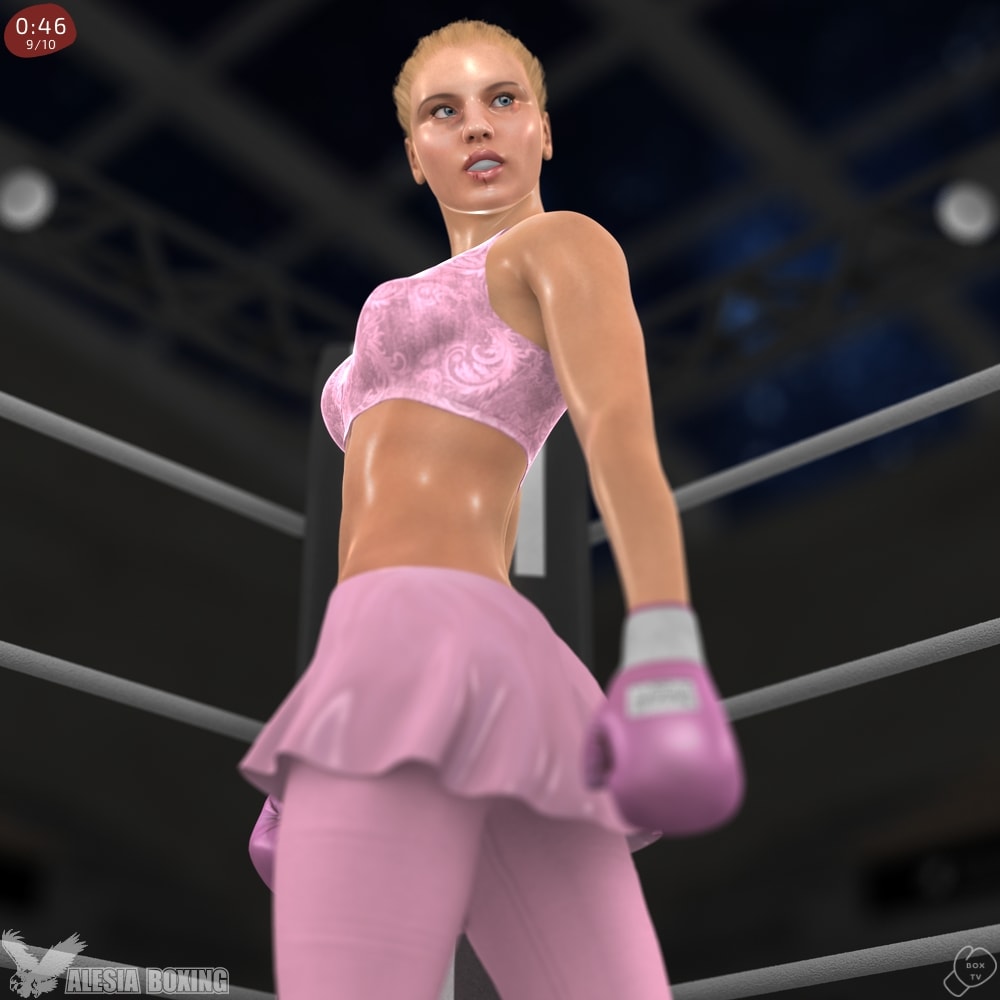 Anna resumes the aggression as soon as she is allowed to get anywhere close to Leyla again. She applies pressure on the younger Berliner, firing energetic jabs. Leyla struggles to keep the invader away, with the jabs lashing out and whipping her chin more often than not. Counterattacks yield little results as the Ice Queen is firmly in command late in the round. 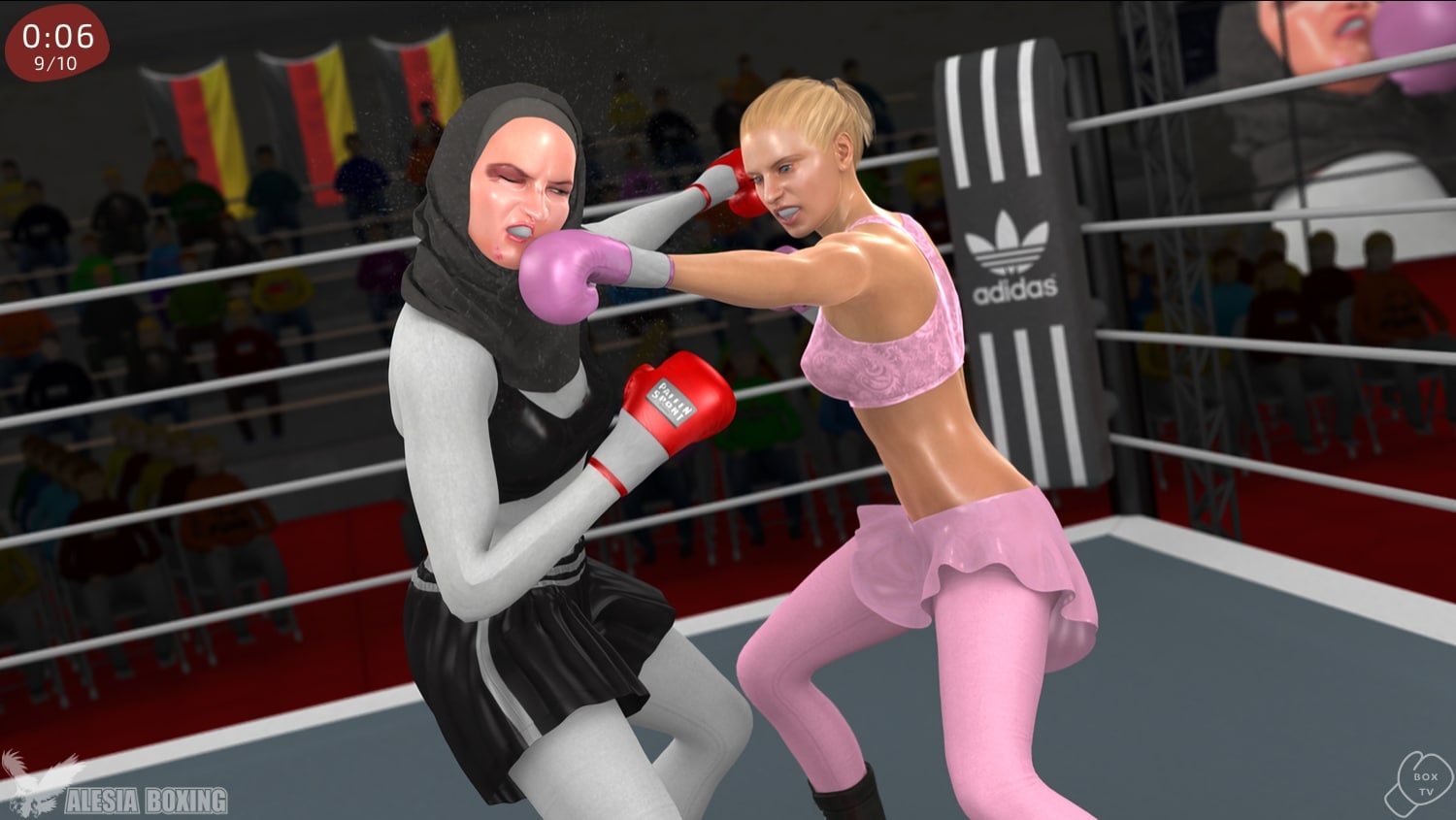 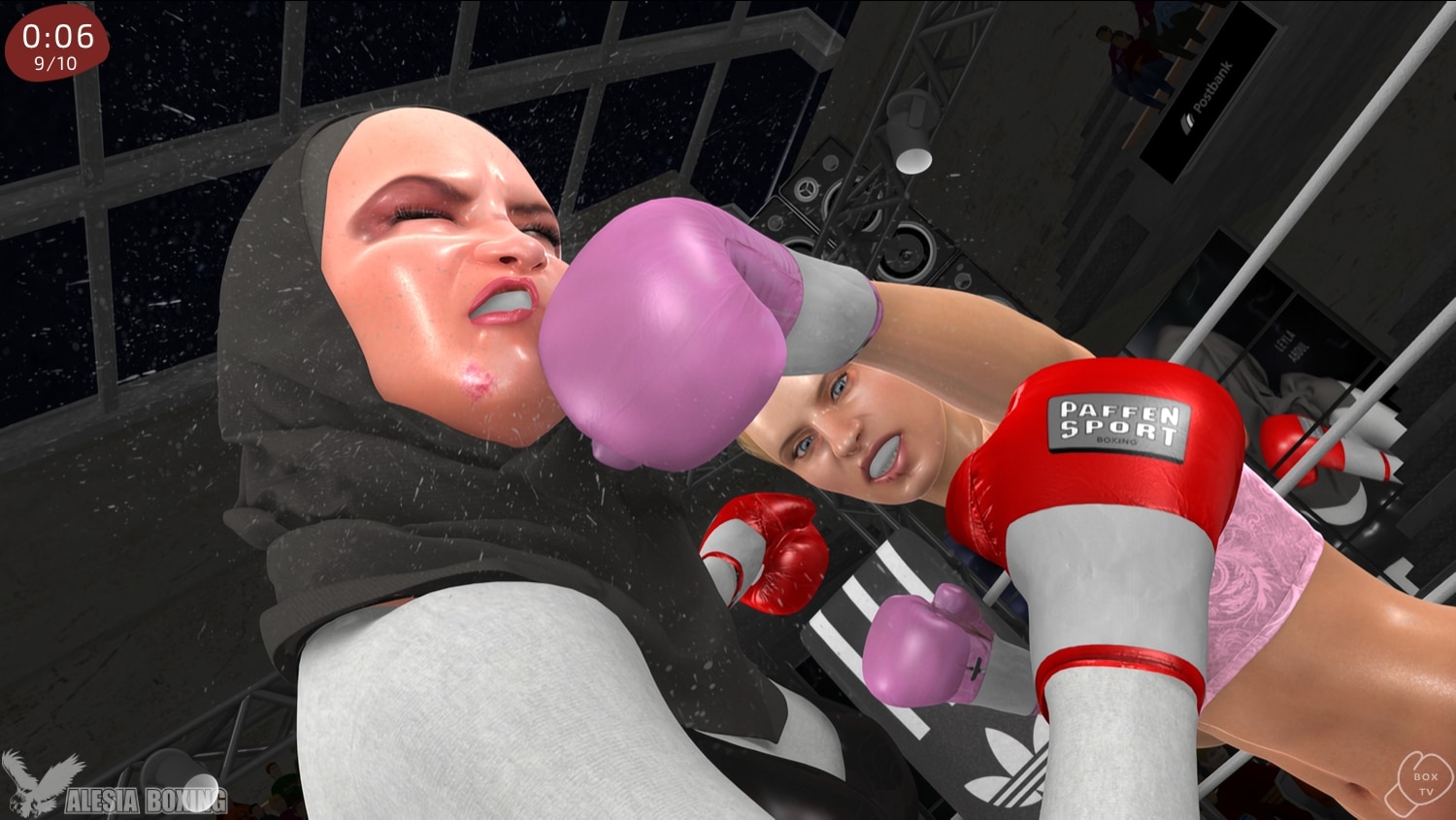 That’s until the bell rings. The crowd applauds the two fighters who have completed nine rounds out of 10.

Esther: “We are set for the tenth and final round of this disputed match between two fearless Muslim fighters. It easily surpasses what was promised before the opening bell. Who will be successful in the final stretch?”

The tiebreak is coming in the next post, y’all.

The Queen breaks the ice 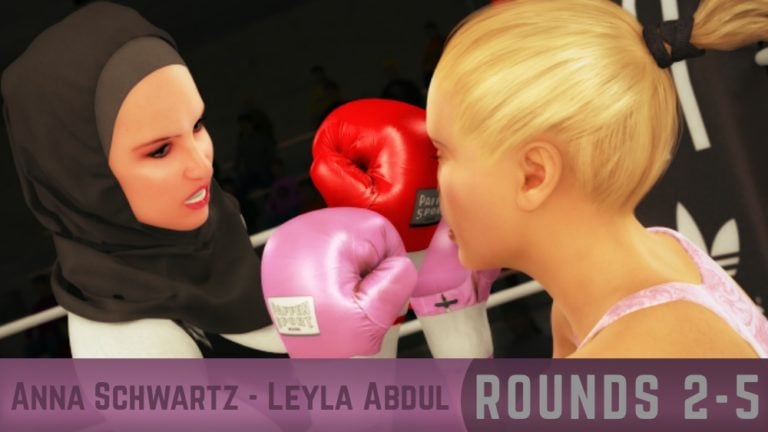