New York – Weeks after a vacation in Alaska, Amber Rose and her coach Hanna Gabriels start working on preparations for the next fight.

The blonde boxer is extremely motivated after defeating Catarina Espiga upon her return. She trains relentlessly. She and her coach have talked about having Andrew, who is Amber’s new boyfriend, in the team.

The young man has studied nutritional science, so he can handle planning and cooking for optimal nutritional intake in addition to another part-time job to make ends meet. He enthusiastically agrees to the idea and to a move to the Big Apple.

Housing quickly became a question. Andrew agreed to move in with the two women in their flat, which has two bedrooms. Just ahead of the move, Amber is a bit distracted in training so she is given a few days off to make settling in happen as quickly as possible before resuming with real focus.

Life takes on a new rhythm after that. Three hours of training at the gym in the morning followed by showing New York City to Andrew. Then things become normal, with Andrew taking a look at the two fighters’ schedules and planning for their nutritional needs. They both discover his commitment as he handles meal planning, letting them focus on fitness, strategy and finding opponents.

Who should Amber fight next? That’s a huge question, one evening, as Hanna has many documents on the dining room’s table. Many fighters are interested in Amber, but picking the right opponent is always a difficult question right after a successful return. 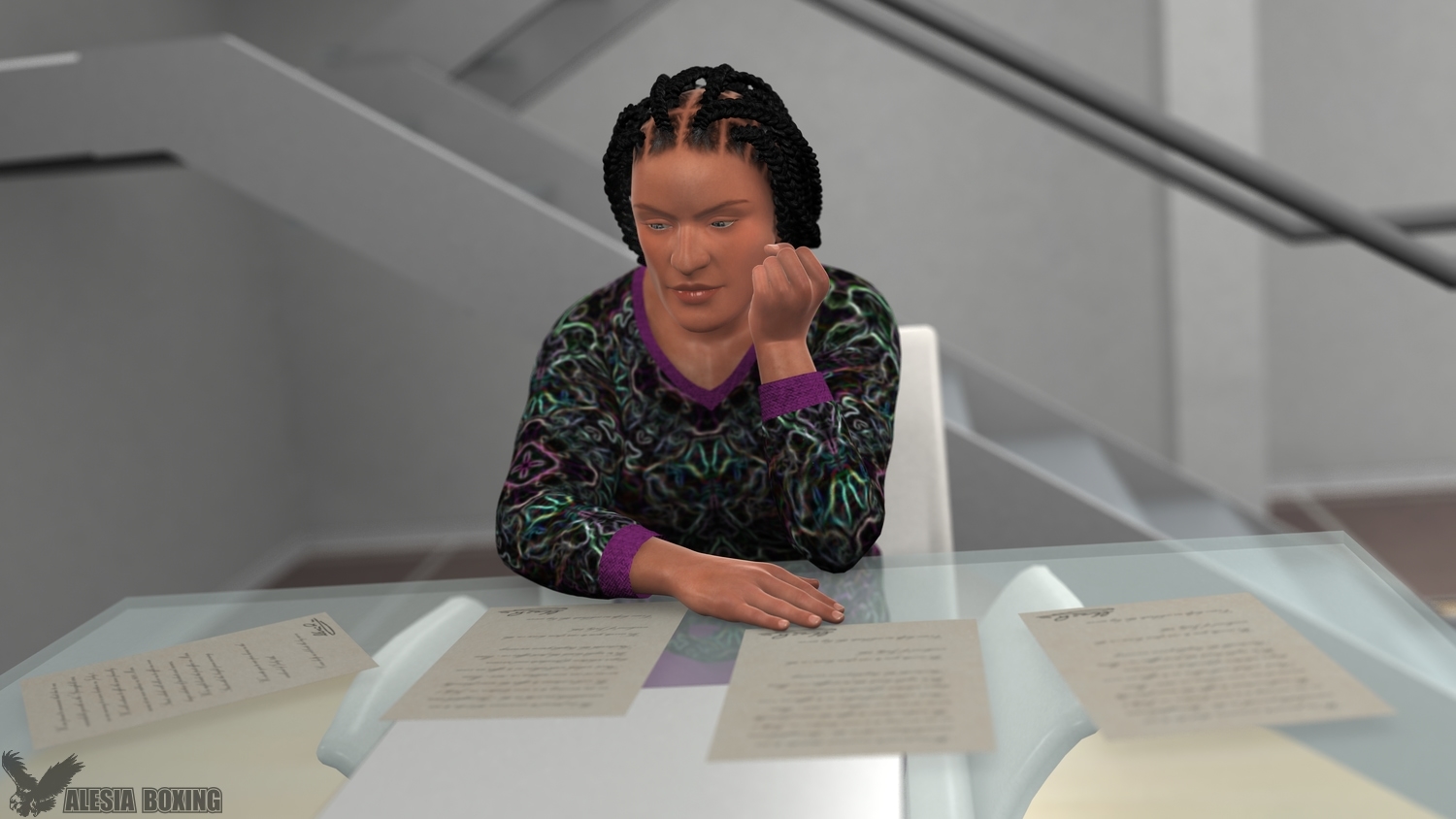 Amber and Andrew get back home as the trainer reflects on possible options. Hanna gives her fighter a rundown of potential opponents including an inquiry from Super Lightweight champion Anastasia Orlova.

Hanna: “We’re gonna turn that down, though. She asked just in case she would need to stay active in case negotiations with Alesia Schumann were to push their fight into 2021.”

Amber: “What? You’re saying no to a world title fight? I can beat anyone.”

Hanna: “Not yet. You’ve have only one fight since your return and Catarina is worlds away from Anastasia, who knows you’re not ready for this kind of fight yet. We’re not throwing you in as a tune-up for a world champion. No way.”

Amber: “I can’t believe you’re deciding that without even considering it.”

Hanna: “We’ve been clear about matchmaking from the beginning, Amber. Ring Kings and I plan for you because we have experience that you don’t, and can avoid falling into traps. If you work hard and perform, we’ll make you able to beat anyone. That’s how it works.” 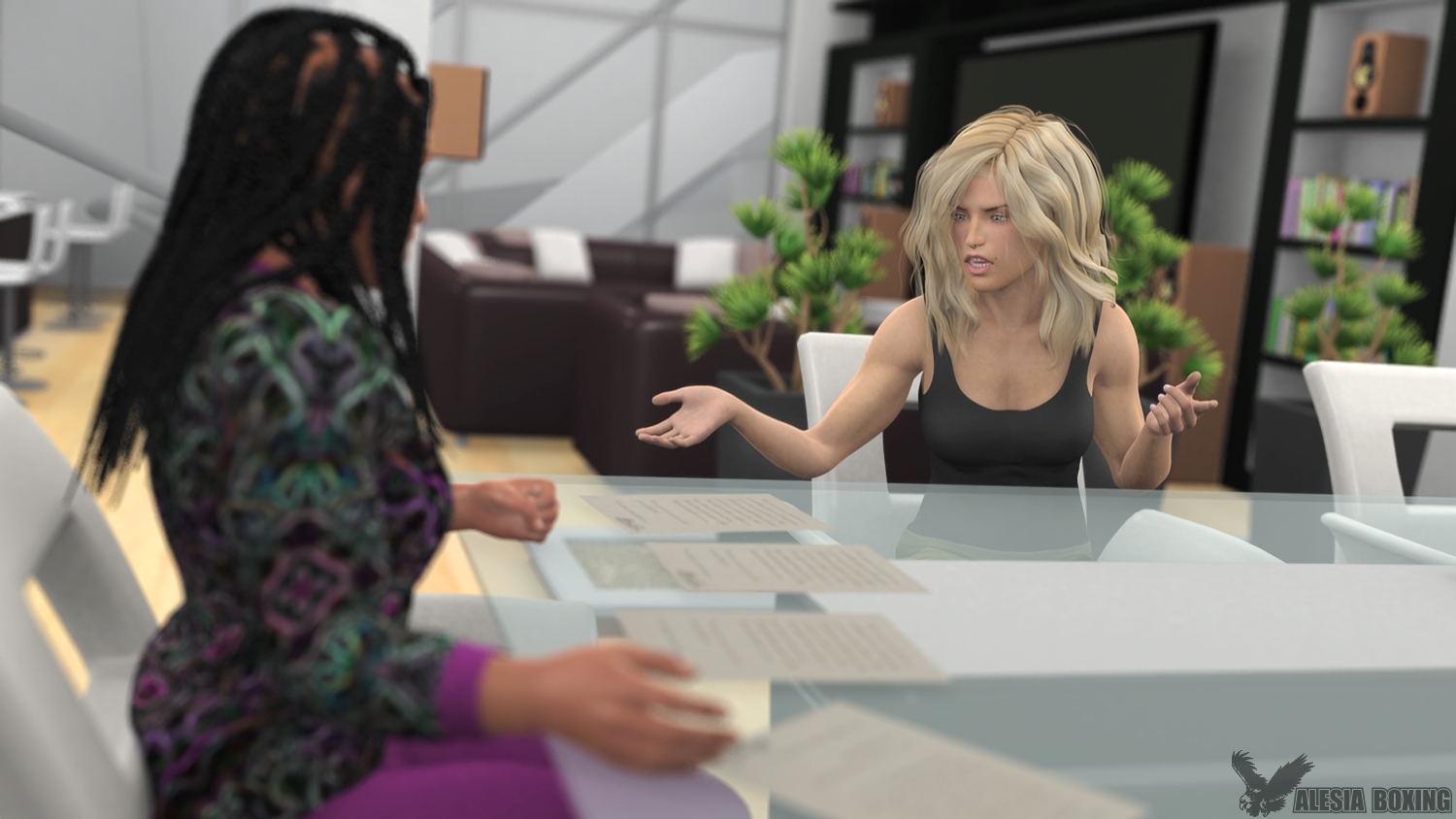 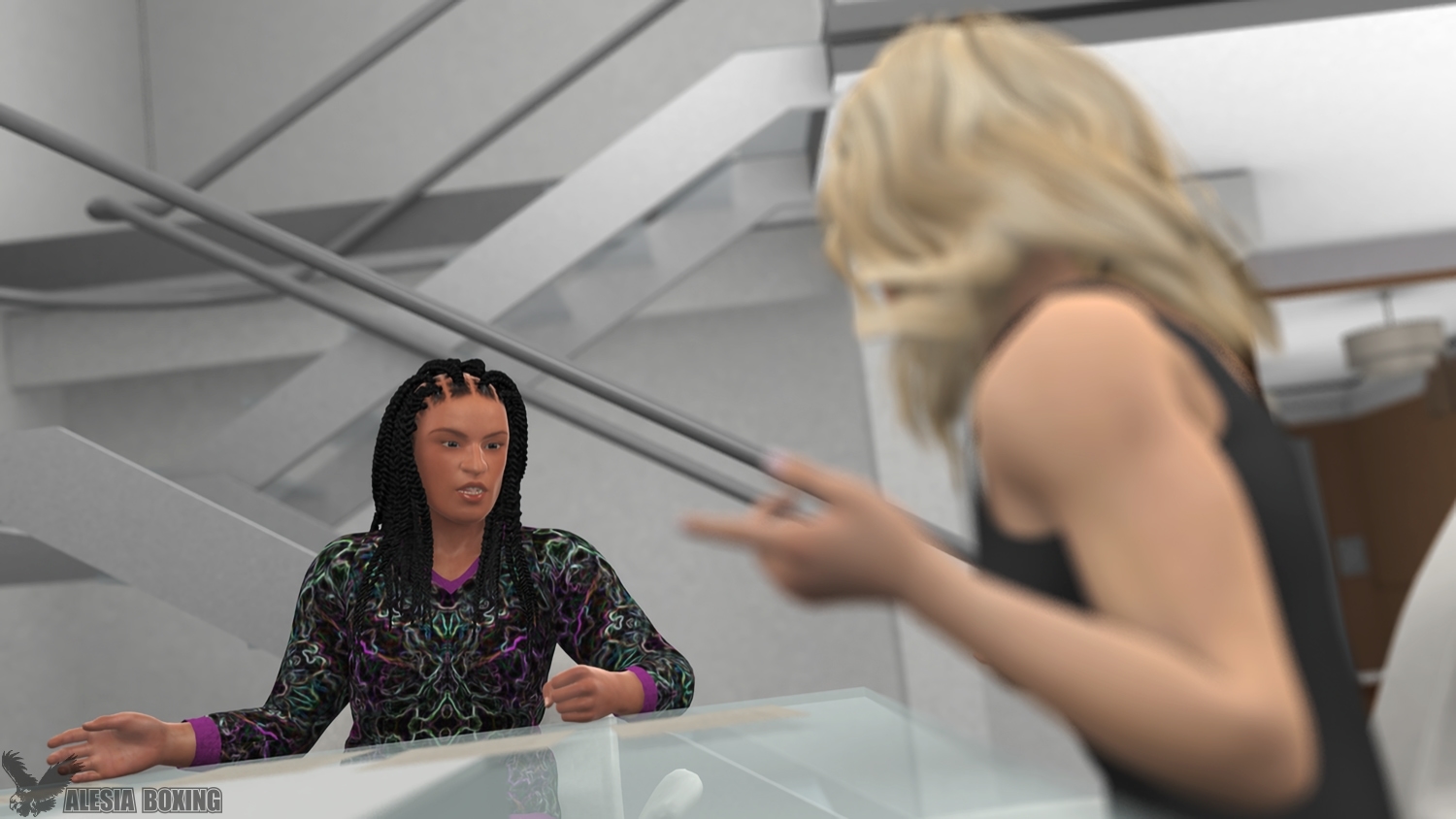 Unhappy with this firm stance, Amber gets up and goes to the bedroom to do something else. She grumbles at the idea that a title shot isn’t within reach despite the champ’s interest.
Minutes later, Andrew joins her.

Andrew: “You know I love you, but I see that Hanna is right. You’re strong and you can beat many fighters, but taking on the world champion right after your return makes it a bit early.”

Andrew: “Not all the time, dear. Orlova is insane in a contest and she’s pure evil outside of the ring. Hanna and your promoter are not going to burn you by throwing you at her before you can handle this kind of monster. Look at what she did to Victoria Owen in her title shot. She dangled a payday and took her to the slaughterhouse.”

The blonde looks down and away before sighing.

Amber: “It really is that dangerous, huh?”

Amber: “Meh. Okay. I might wanna see Anastasia against Alesia, though. That should be a hell of a fight.” 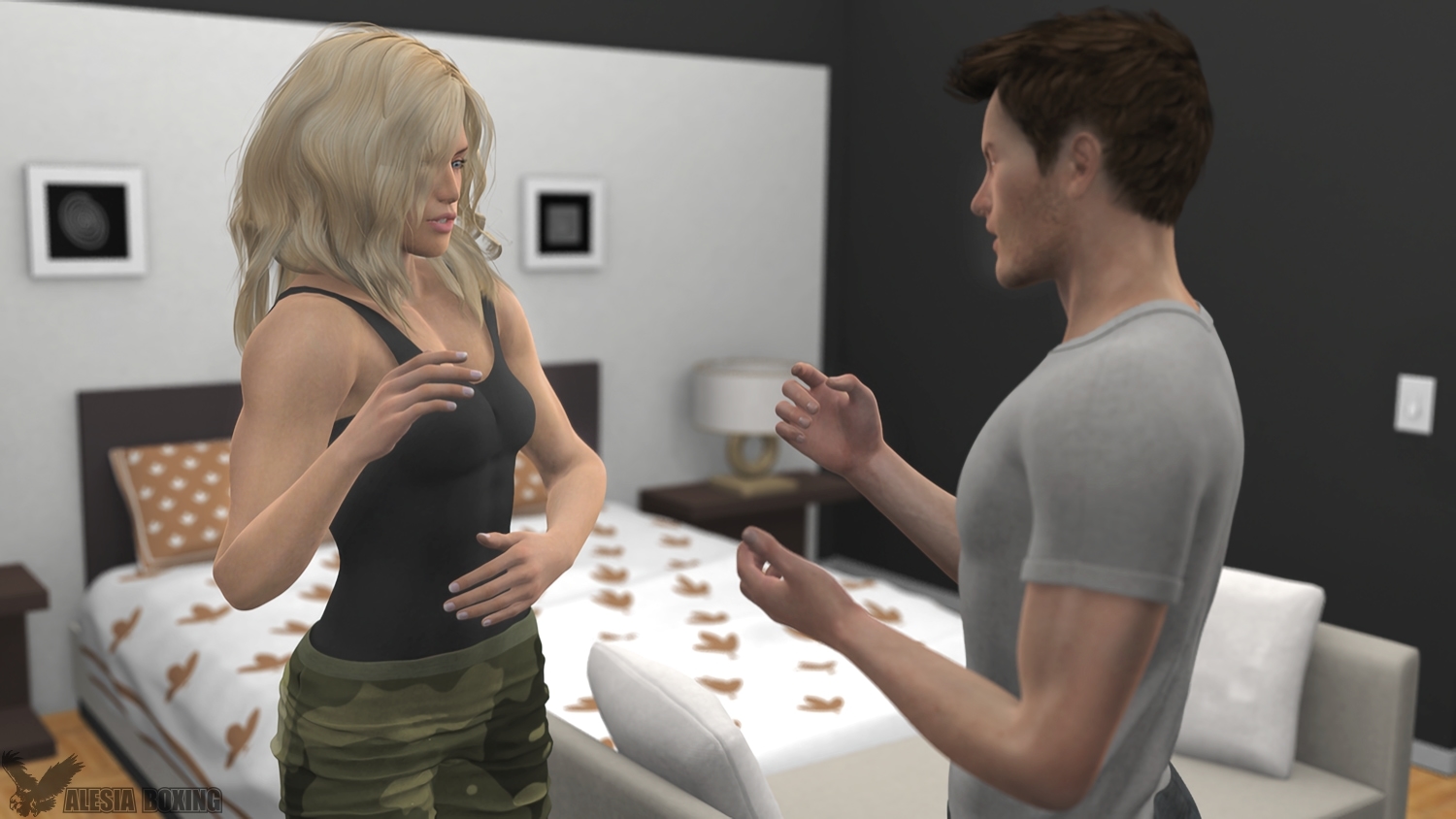 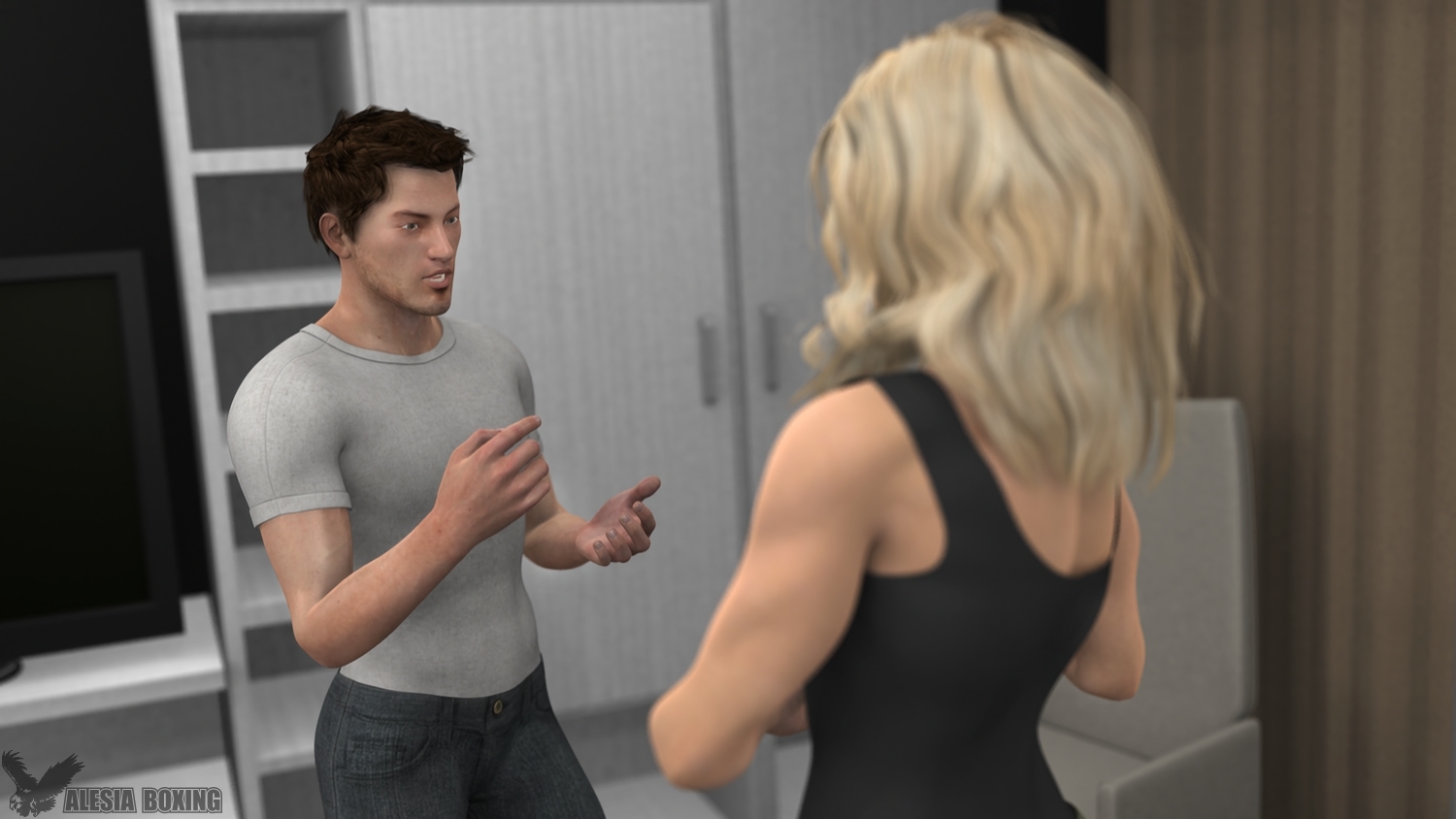 The next morning, Amber breaks silence with her Costa Rican coach. She comes out of her room with a smile and joins her flatmates at the breakfast table.

The boxer concedes that taking on Orlova would be a mistake, making the coach nod.

A shocked Amber spits out the first gulp of coffee, gagging and making everyone laugh.

Hanna: “I had a Skype conference with our handlers at Ring Kings and we agreed on an opponent. She’s the new American Super Lightweight champion, Kathy Black. Physically strong, but not the smartest cookie and we think that her win was against a weak defending champ. With proper tactics and punching power, you can take her down.”

The blonde wolfs down eggs and fruits as she listens to the details, the matchmaking and the purse. It all sounds very good.

Hanna: “What do you think?”

Hanna: “Then it’s on. We’ll sign the papers and have an announcement out. Get ready for a photo shoot for the poster.”

As she walks to the gym later on, Amber has a big-ass smile on her face. She thinks: “An American title shot against someone I have a good chance to win against. Now that’s the life.”

Scroll back to top wpDiscuz