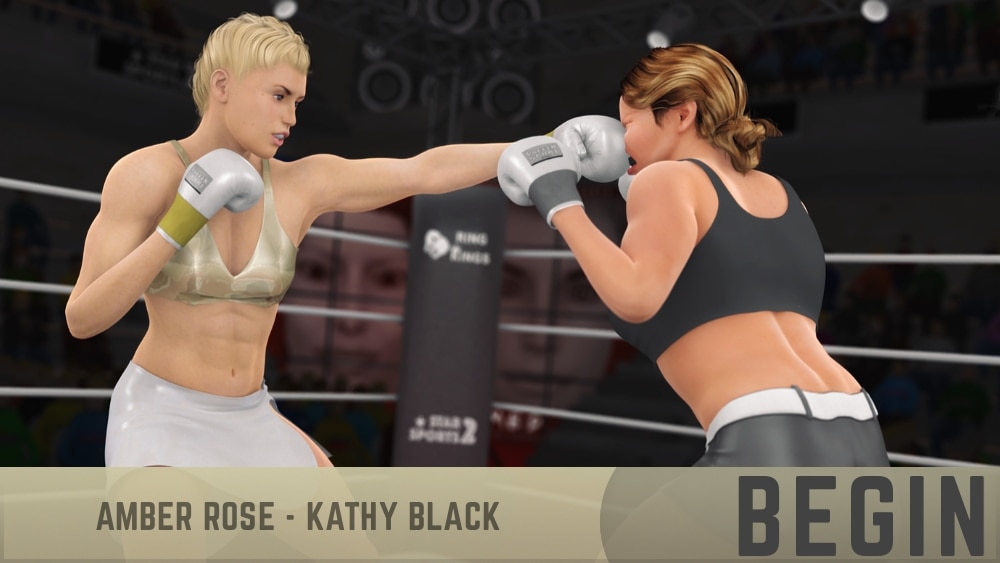 Las Vegas, Nevada – There is tension in Amber Rose’s dressing room as Hanna Gabriels gives her protégée a warm-up. Amber does hard counterattacks on the pads while moving backward.

The coach is satisfied after the workout. She massages her boxer’s shoulders for relief, making her close her eyes and enjoy the relaxing moment. She lets her mind go over the possible tactics to fight Kathy Black, from Hanna’s training to Mercedes Carter’s tips. She visualises herself winning.

Once the massage is over, Amber opens her eyes. It’s only a matter of minutes before an official knocks on the door and asks the ladies to go ringside.

Amber gets out with AC/DC’s Thunderstruck blasting through the speakers. She looks focused and her face says “I will get out of this ring with the belt”. As she turns up near the red corner, Mercedes is sitting at the guest table after accepting her invitation. This support is good for the Russian-American’s spirits after shedding blood, sweat and tears in training.

Kathy Black enters second as she is the reigning champion. The song Black Magic, by The Amazons, plays through the speakers as she walks with a smile that is half-friendly and half-menacing. She gets cheers from fans who love backing a champ.

Ring announcer: “Ladies and gentlemen, welcome back at the Mandalay Bay, for 10 rounds of championship boxing in the Super Lightweight division. Introducing first, fighting out of the red corner, she comes from Miami, Florida, and is coached by Hanna Gabriels. Her record stands at eight wins, five of them by way of knockout, and one loss. She is a former WBC Silver champion. The challenger… Amber ‘The Beast’ Rooooooose!”

Jim: “Rose wears her name very well. She has only one loss on record, against Alesia Schumann, who has recently earned a title shot against world champion Anastasia Orlova.”

Warren: “The Russian-American has a solid build and a huge right hand. However, she favoured elusiveness and placement in her last bout against Catarina Espiga, a Mexican puncher who takes no prisoners. She may be prepared to do the same tonight against Strong, who brawls and often takes unnecessary damage.”

Ring announcer: “Her opponent across the ring fights out of the blue corner. Her record stands at 12 wins, 10 of them by way of knockout, and three losses. She is the reigning American Super Lightweight champion, a raging animal… Kathy ‘The Amazon’ Black!”

Jim: “Black has an impressive record. What do you make of her situation?”

Warren: “This could be the biggest test of Rose’s career as she tries to steal the title away from Black. She has power, physical presence, a good chin and she loves a good scrap. The kind of woman who makes trading dangerous because she is always one punch away from dropping her opponent.” 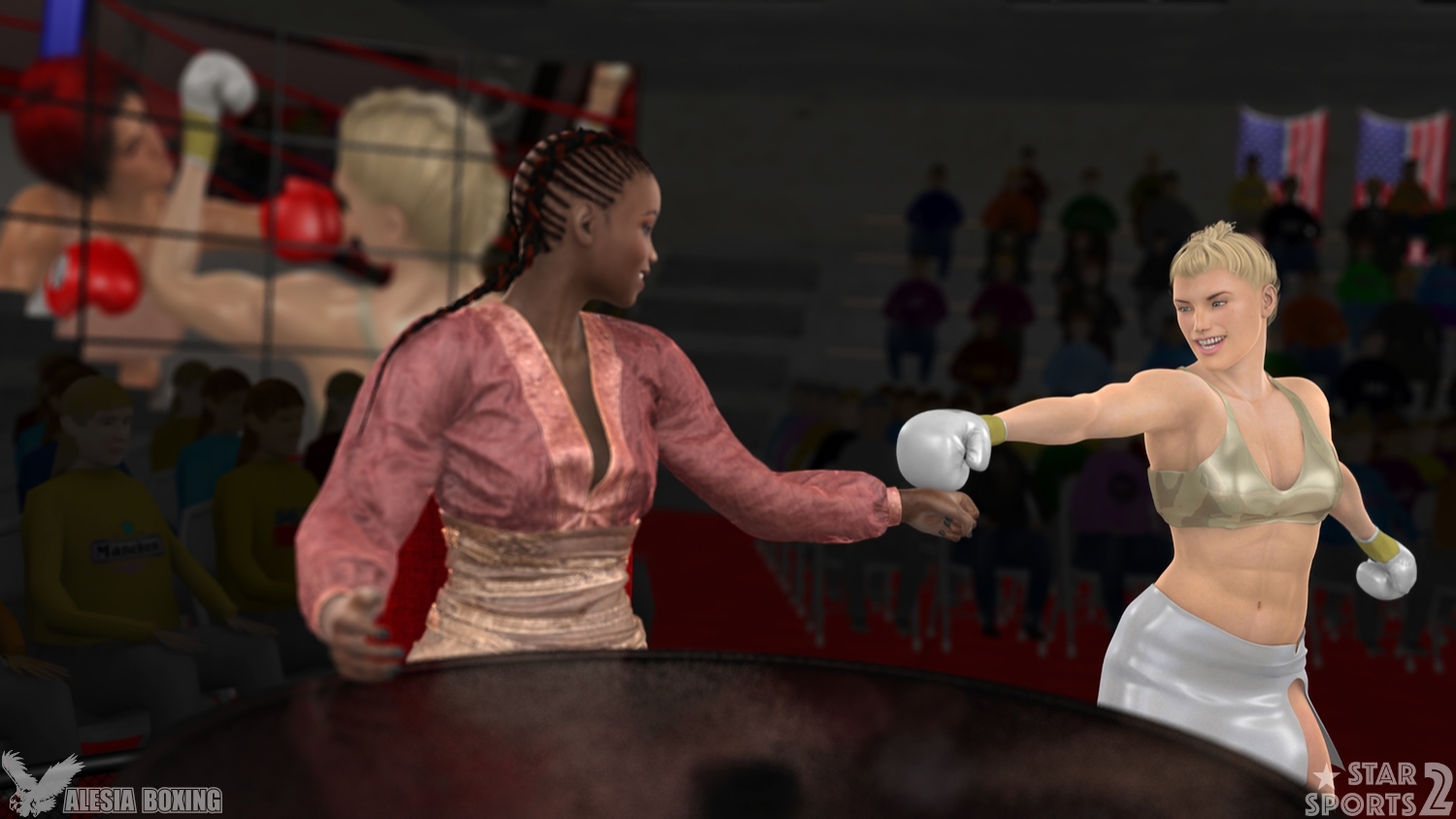 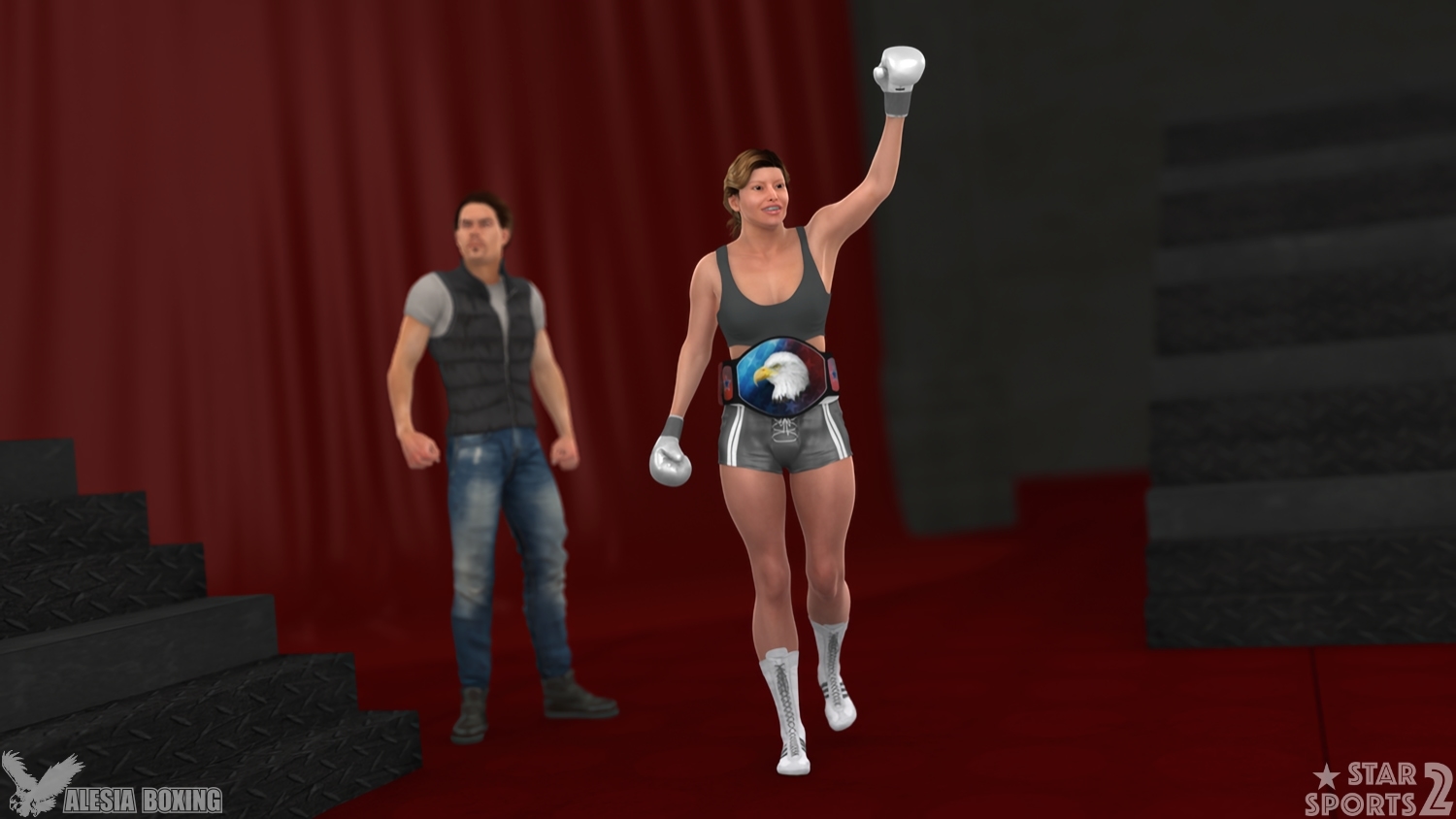 The fighters go to the middle of the ring and receive instructions from referee Jeffrey Cain.

Jeffrey: “This fight is scheduled for 10 two-minute rounds. There is no three-knockdown rule. There is no standing eight-count. You cannot be saved by the bell in any round. If you knock your opponent down, you have to go to a neutral corner before I start a count. If you foul intentionally, I will deduct a point. Protect yourself at all times. Obey my command at all times. Have a good, clean fight. Touch gloves.” 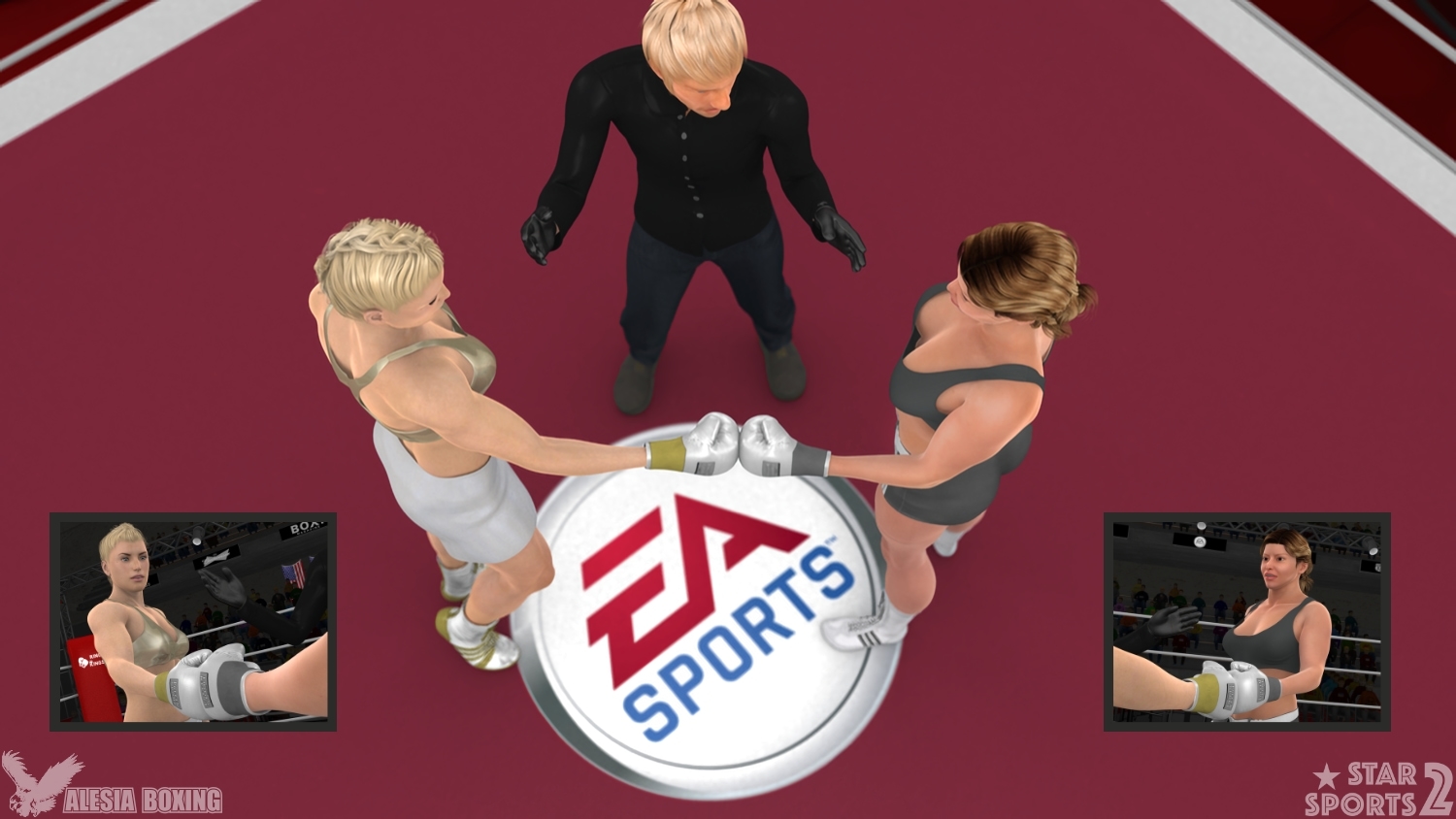 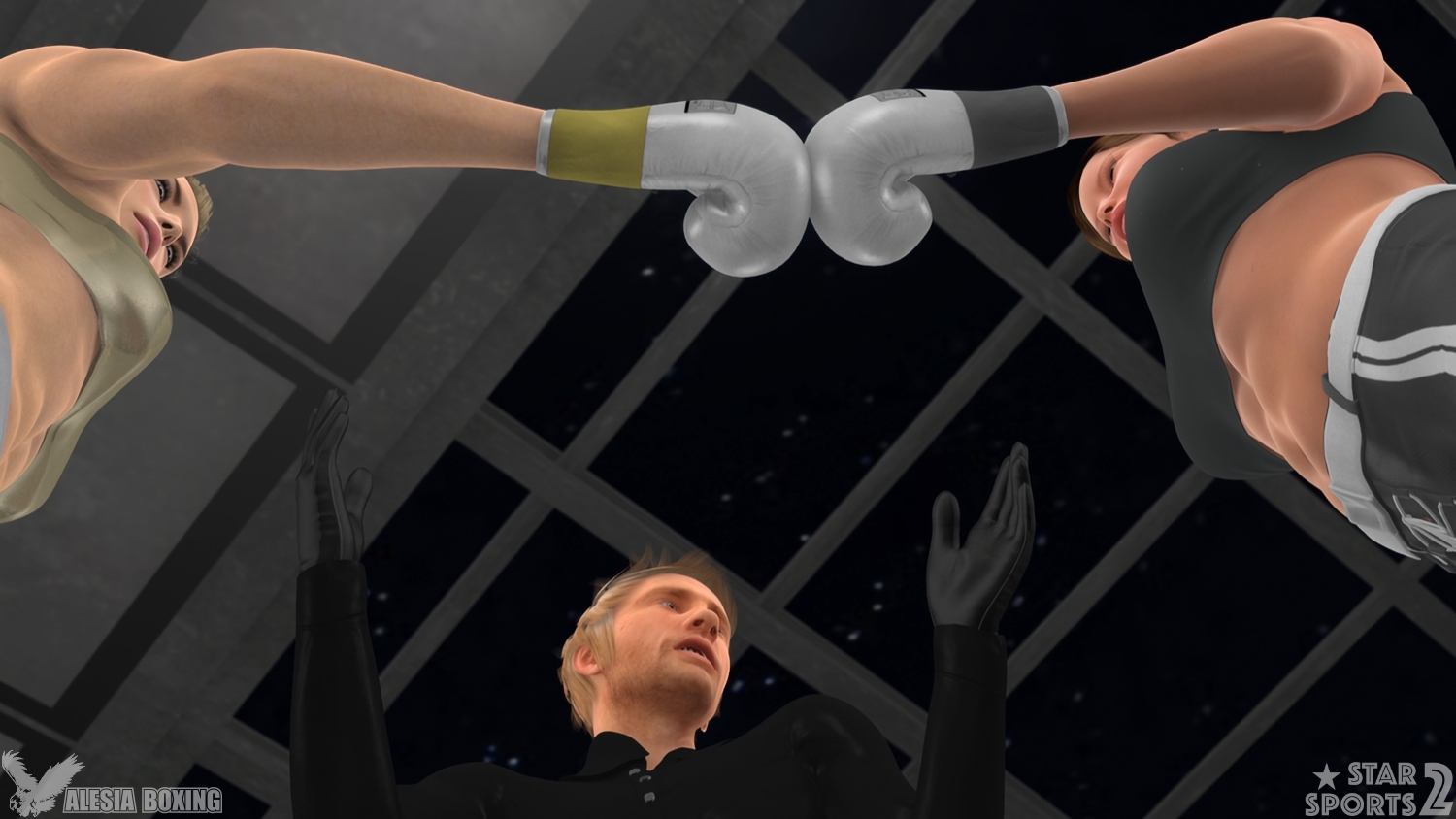 The two fighters get to the middle of the ring and throw some tentative shots to measure each other up in the first 30 seconds.

It takes little time for Amber to put more venom in her jab to send it through Kathy’s loose guard, between the gloves, to snap her head back. She does it repeatedly and the audience hears the snappy pish sound of her leather colliding with a face.

Jim: “Rose is off to a very good start. She punches with authority while the champion is searching for her comfort zone in the ring. Just what a challenger needs against a champion. She must convince, not just win narrowly to get the points.” 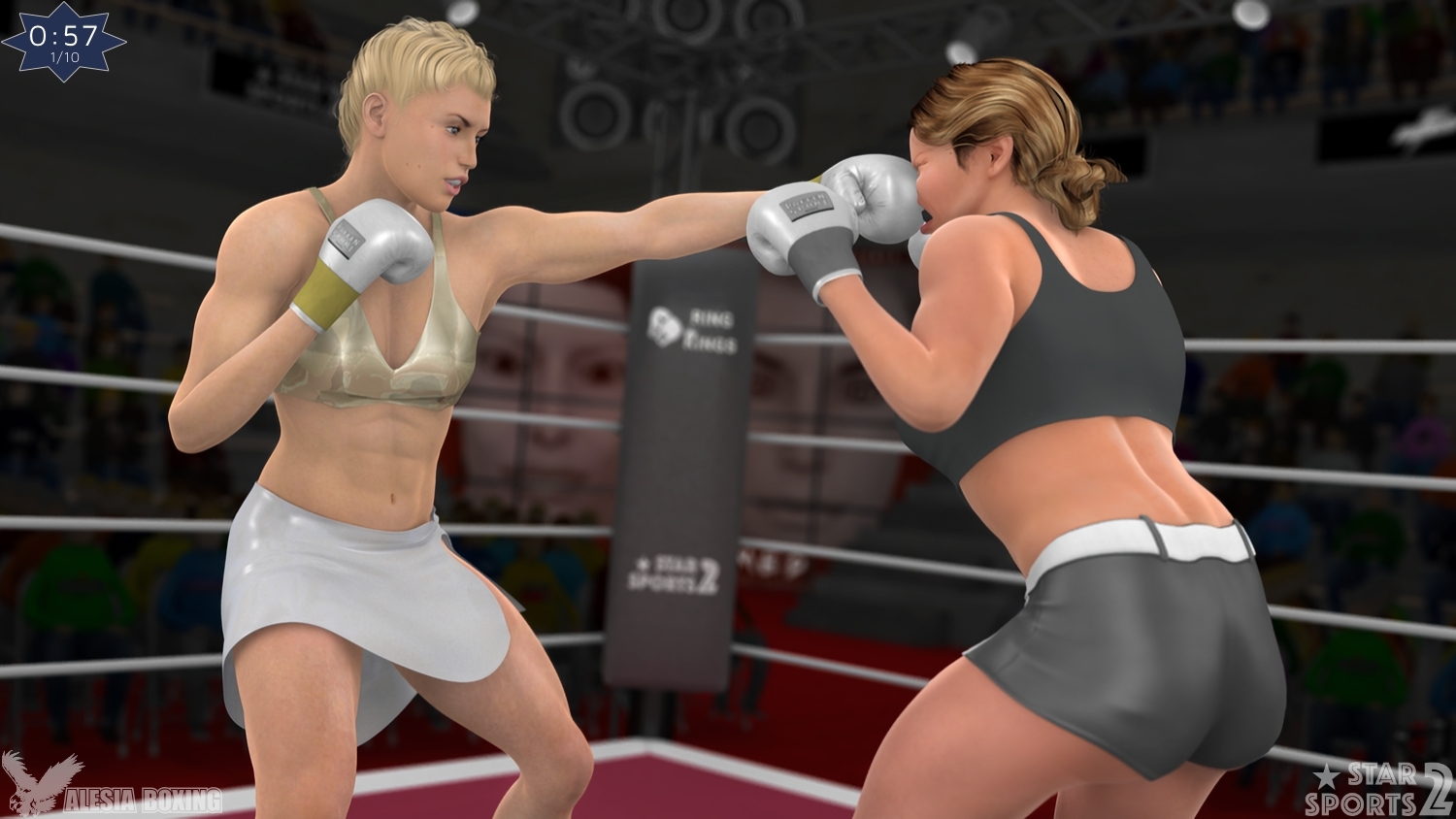 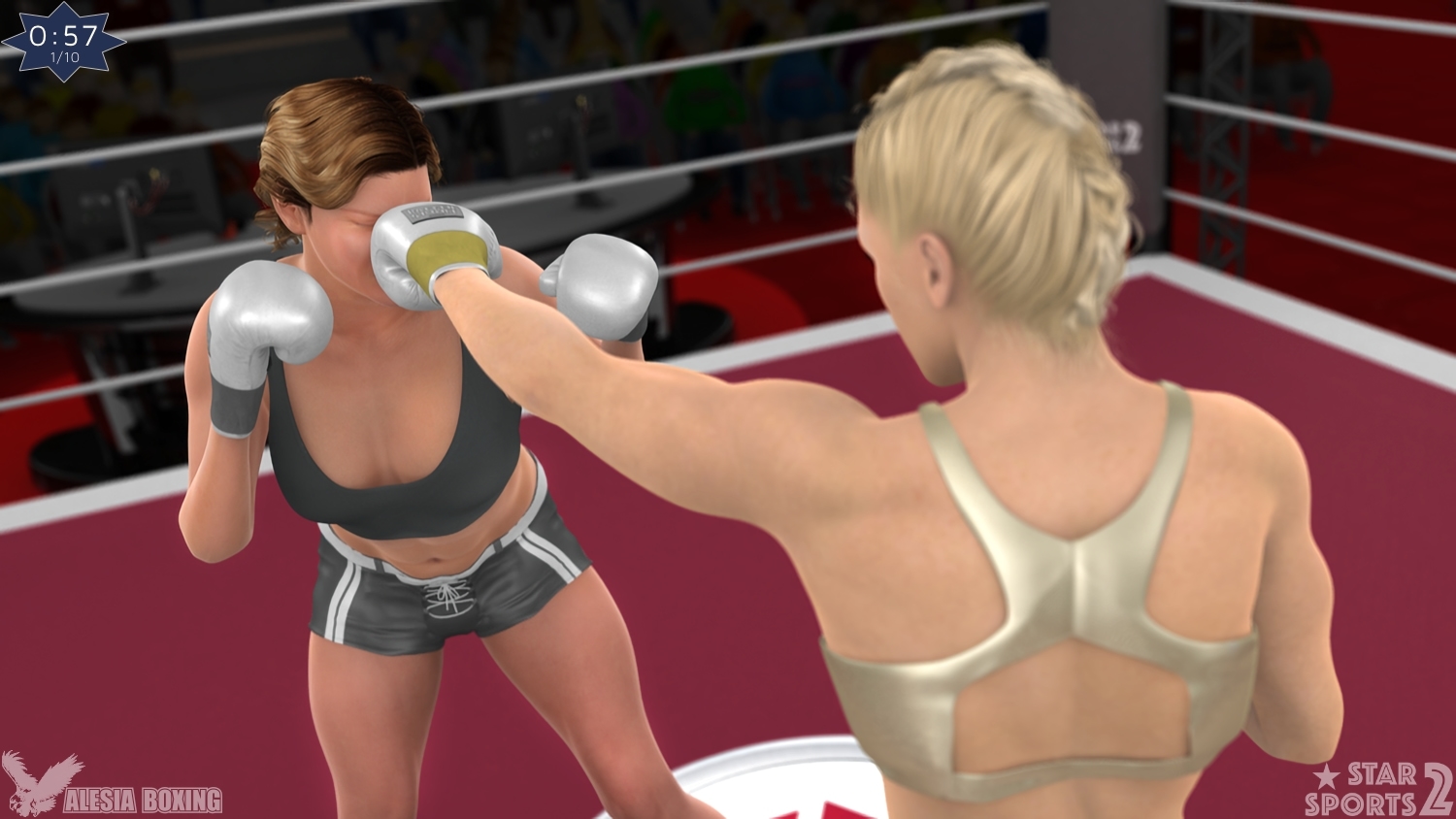 The Beast’s improved footwork is also sharp, and it shows as the action intensifies in Round 2. The Amazon comes forward to throw power shots but the blonde wearing white and gold moves constantly to protect herself. The hard fists wrapped in white gloves hit Amber’s guard, the hard impact giving her the sensation that clean shots would do damage. Then she moves away to safety, out of range. 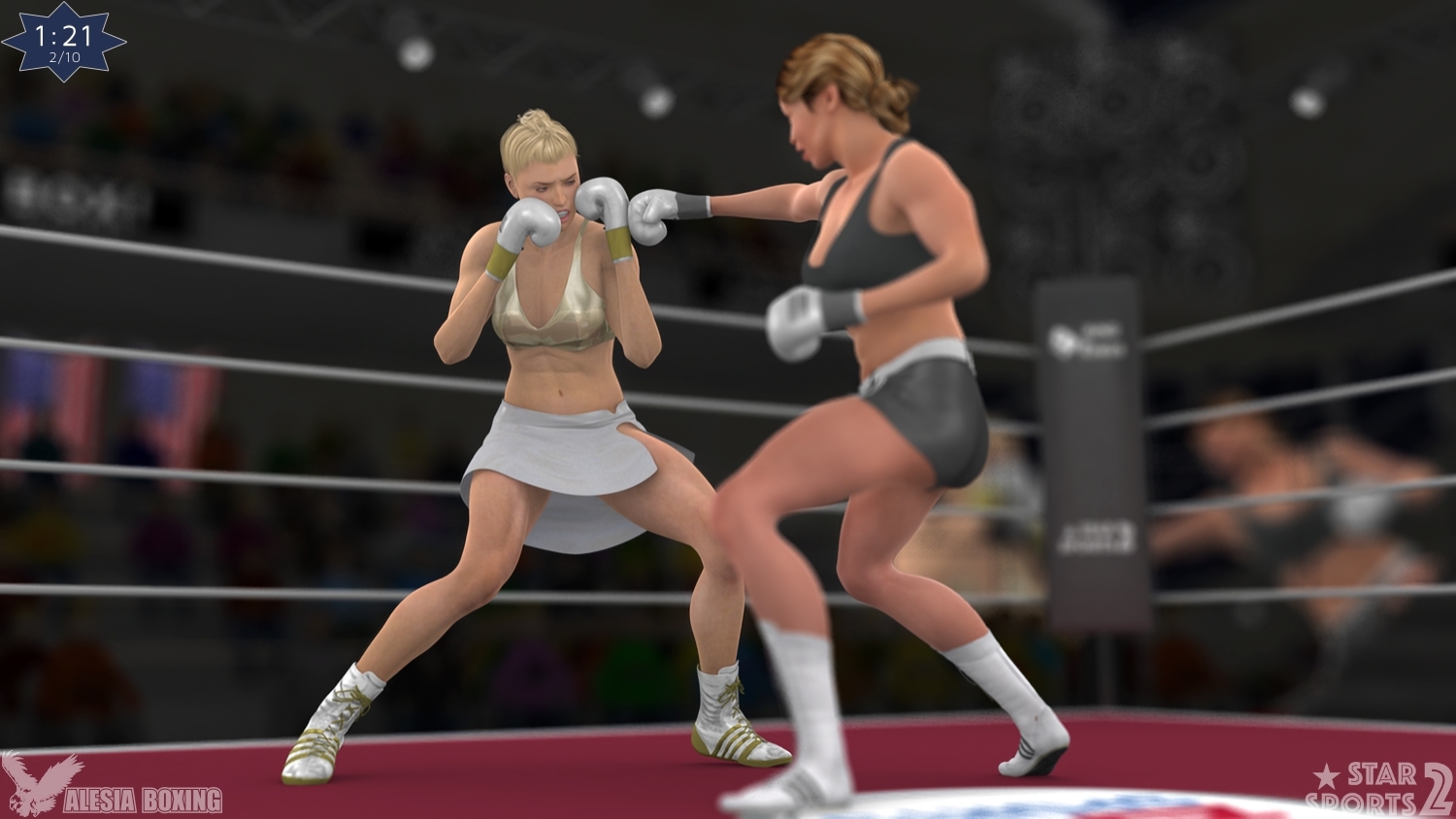 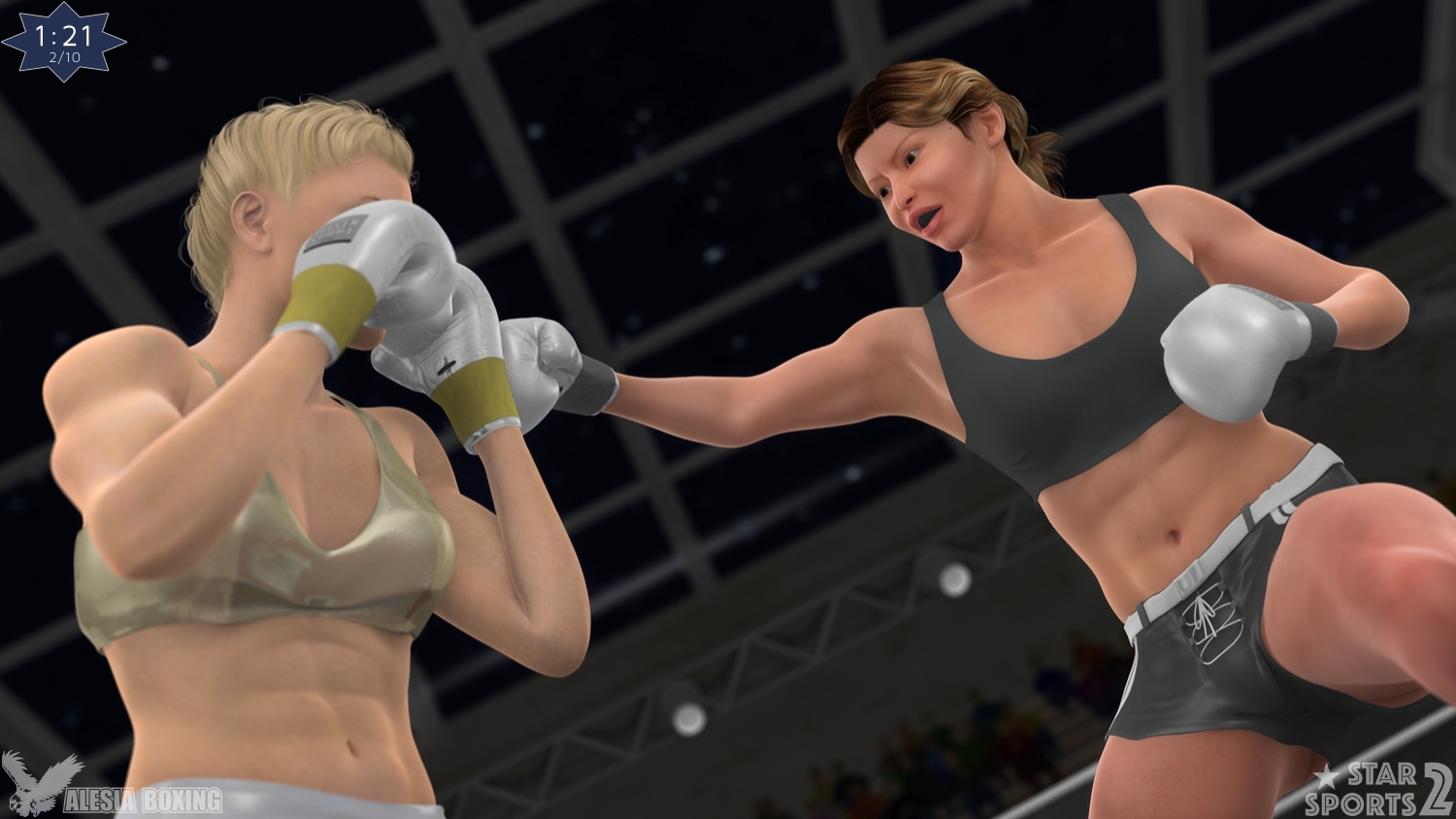 The Amazon and Beast play a game of cat and mouse as the fight moves into the third round. The wild woman remains aggressive but her presumed prey fights back with aggressive counterattacks to land more significantly.

In response to a heavy straight left, Amber turns to the right and hits back with a solid dig to the ribs with her right hand. Then she gets out to avoid an incoming right hook. 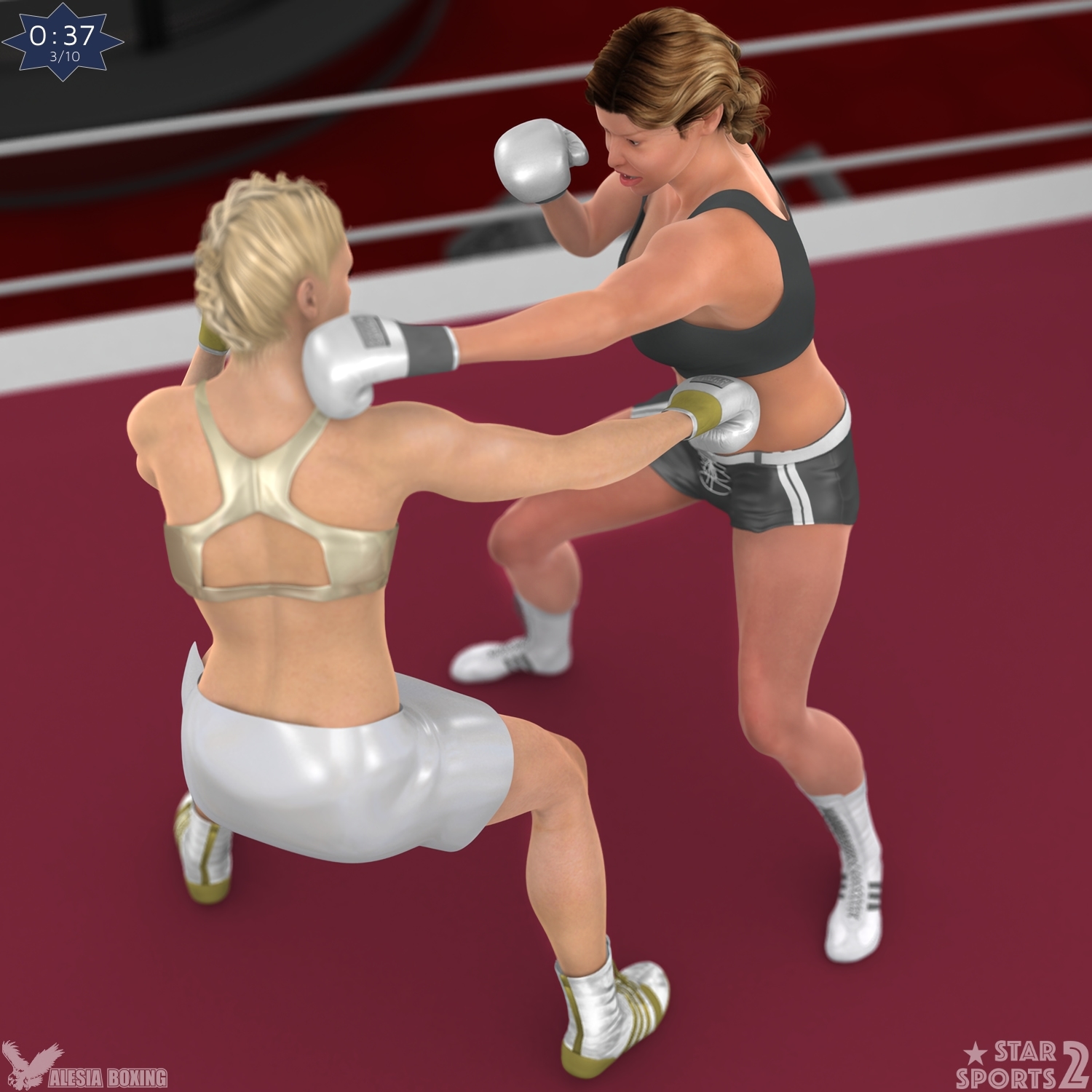 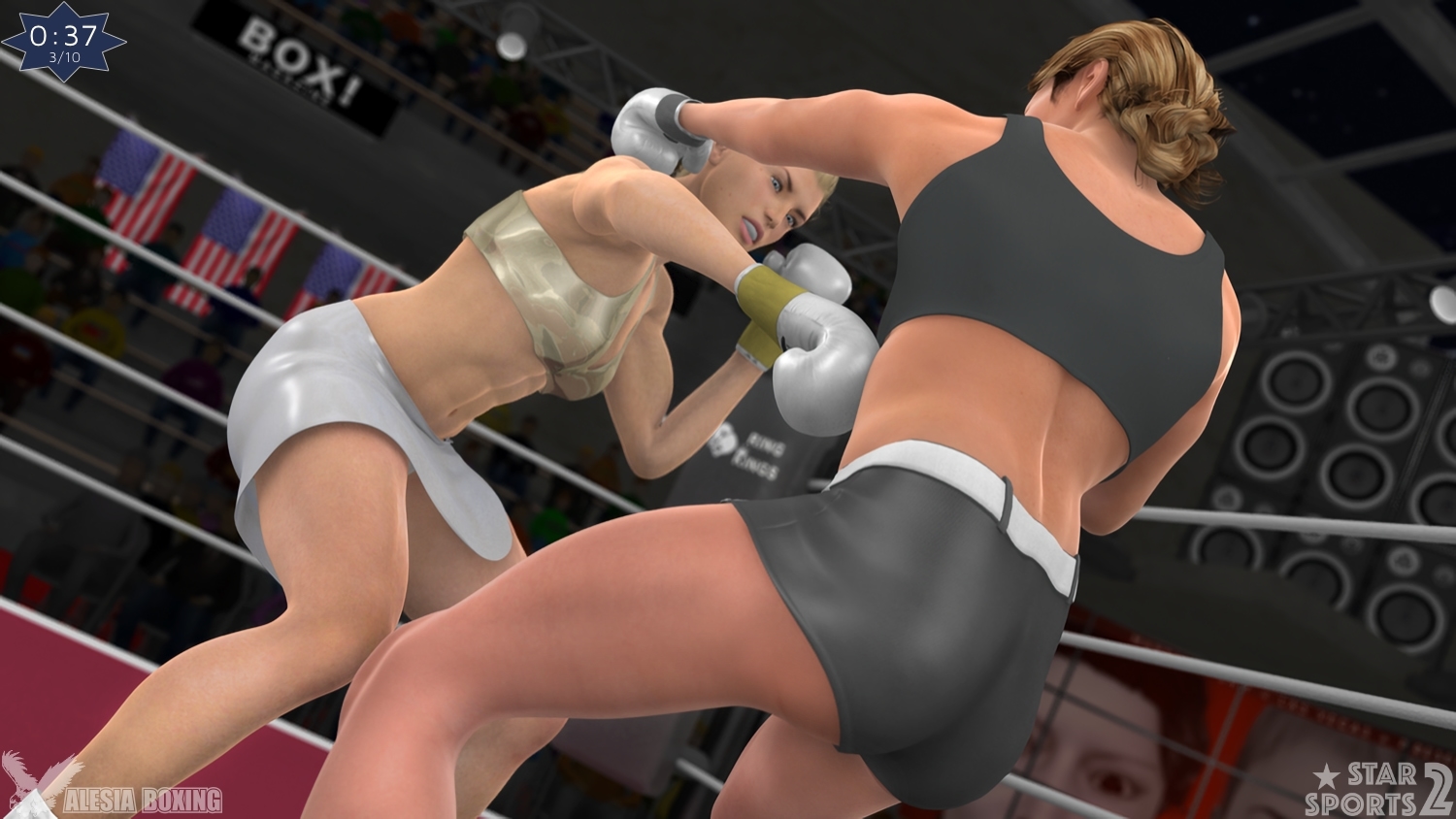 Late into the round, the challenger goes for disruption. Kathy turns to unload a left hook but The Beast comes in with a right uppercut that whacks her chin and snaps her head up with a violent collision. The crowd cheers a perfectly timed power shot on target.

Back in the corner, Amber looks in charge but Hanna asks for more work and better work.

Hanna: “Move that upper body to change your angle and aim downstairs to slow down that brawler. Don’t trade shot for shot with her until we see the effects of your hits. We’re not there yet.” 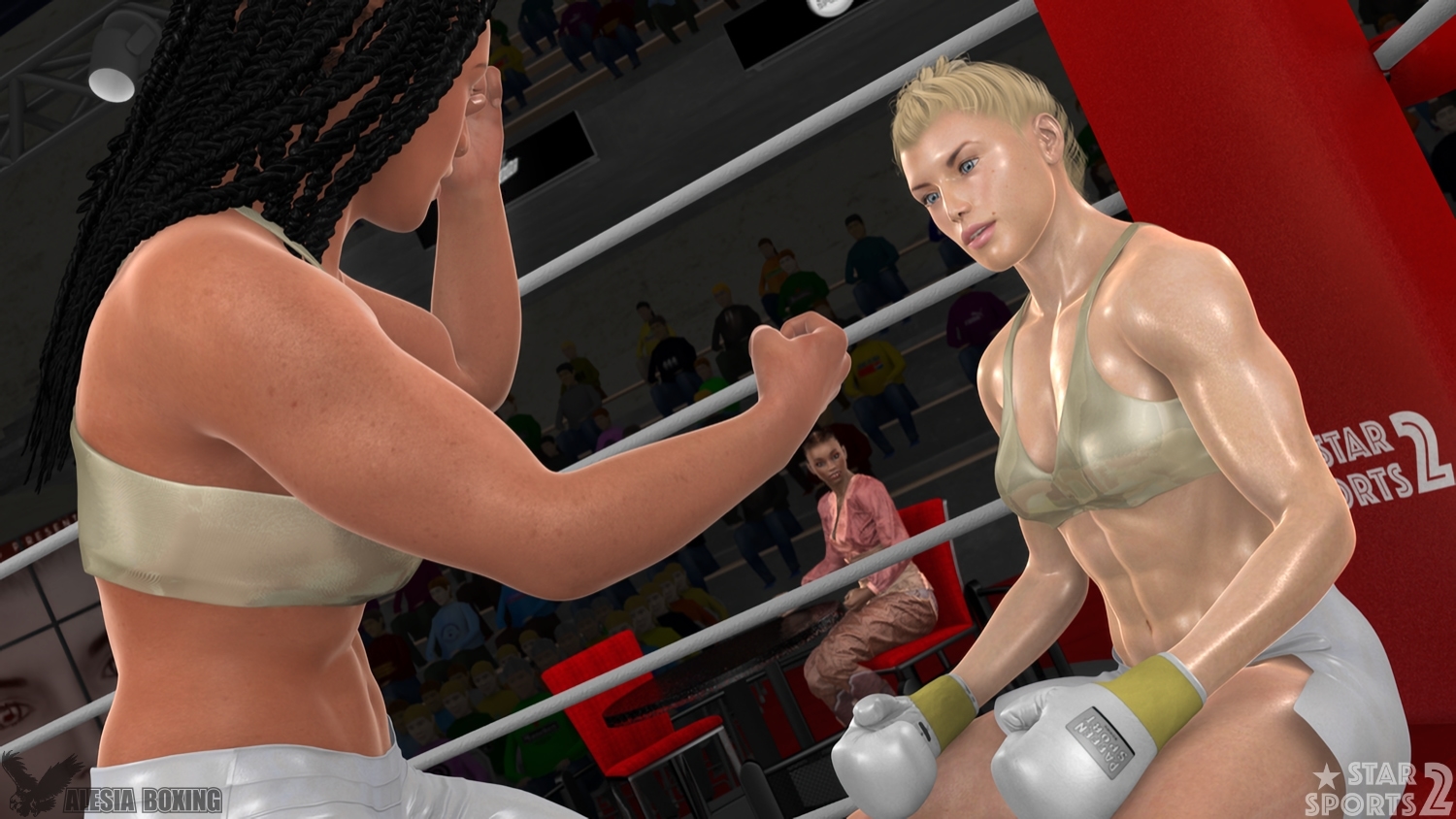 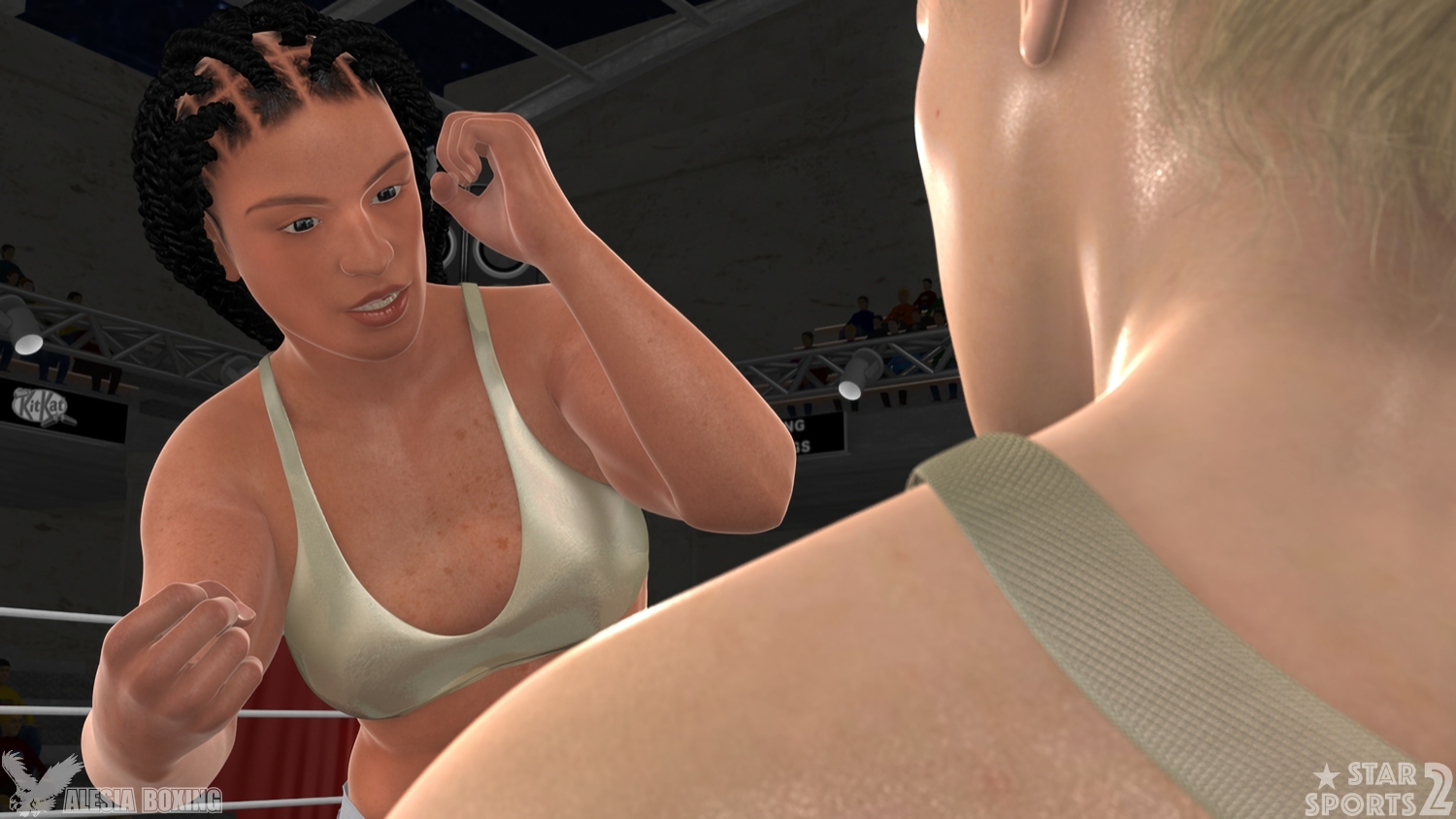 Alex: “I need your aggression to be more focused. Pick your spots instead of going after her so much that you’re bound to walk into punches.”

Alex: “You know you’re the best boxer and you just have to show it. Be disciplined and make it obvious to everyone, starting with the judges.”

Jim: “Three rounds in, we have a surprise. Amber Rose is dominant and Kathy Black is falling behind.”

Warren: “Exactly. I give the challenger the first three engagements since she outboxed the champion with accuracy, generalship and sound defense. You can hardly begin a championship fight better than this. Title holders tend to storm back in, though. Will Black give us the reaction we can expect?” 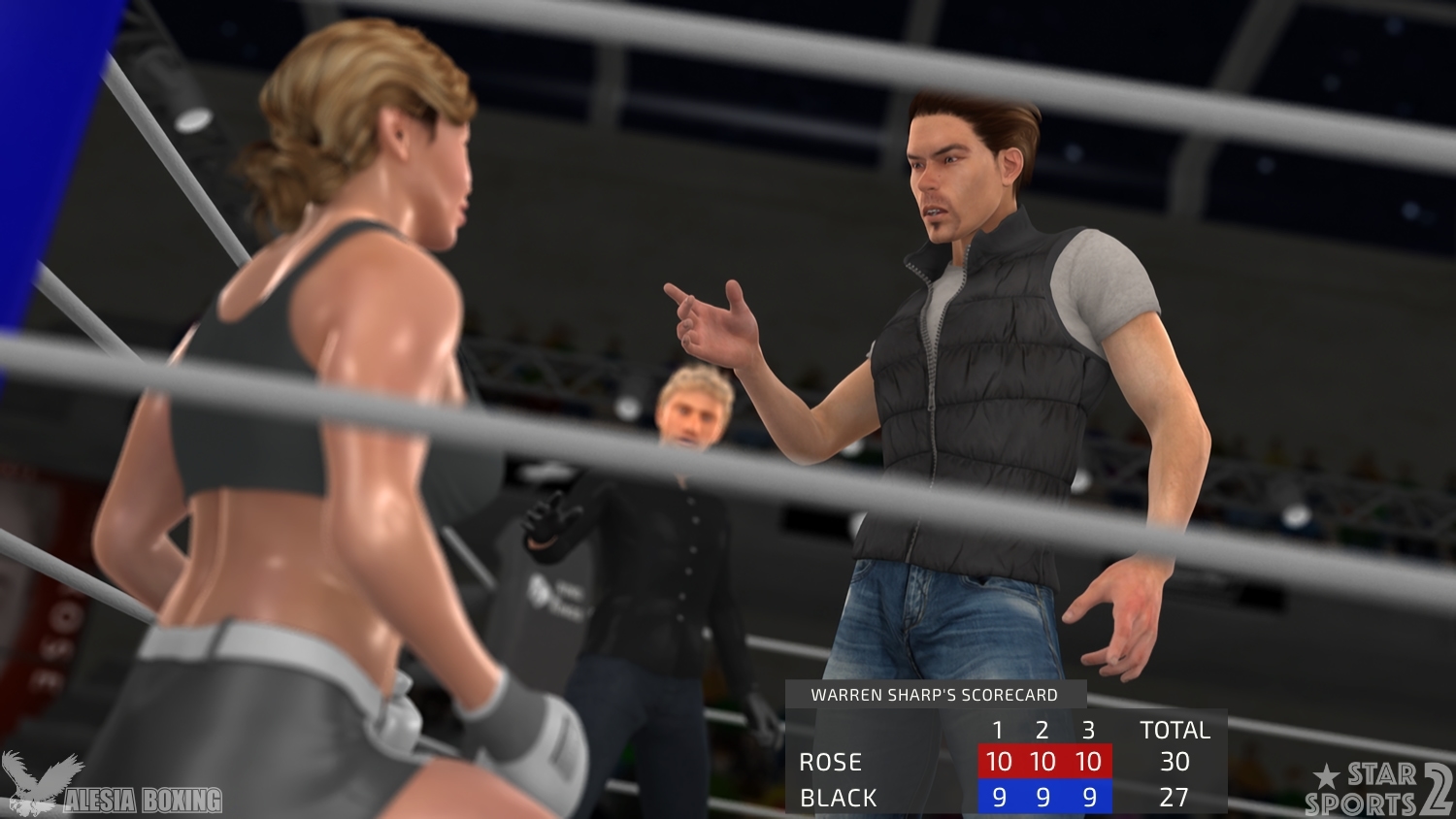 Amber is a character by Circulo90 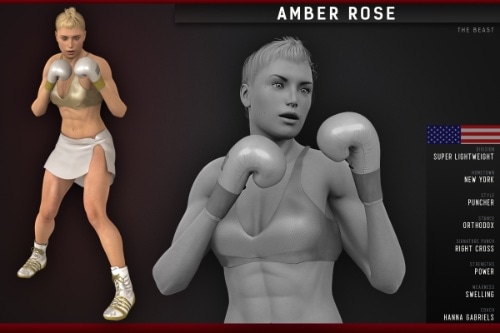