Michaela and Virani resume their dance in the 3rd round. For the first part of the 3rd round, Virani is mostly able to keep Michaela away with her jab along with some harder punches when the German presses too close.

The pink-haired girl has no intention of letting Virani dictate the entire round and goes on the attack. She wades into range for Virani’s punches, absorbing a quick jab from Virani. The Canadian tries to go for something a little more impactful, but gets caught by a shorter, quicker left hook from the Bremen-born scrapper. ‘Das Kong’ doesn’t miss the chance, landing a big punch flush on the chin of the Canadian, who grunts upon taking the biggest punch of the fight.

Laila: “The German scrapper has decoded the Canadian Cobra and lands a short, authoritative left hook on the chin.”

Stunned by that peach of a punch from the pretty, pink-haired pugilist, Virani reacts slowly as Michaela pivots to throw a follow up right hand that crashes into Virani’s chin.

Laila: “Sommer thinks that landing twice is very nice! She gets through with another potent punch, this time a right hand that finds the target. This is a real chin check of the Canadian here in the 3rd round and she is certainly in trouble!”

Alesia thinks: “Oof! Fraulein Kong is such a puncher. Gives me goosebumps. Virani’s jab wasn’t enough, though. She has to hit a little harder from a distance.” 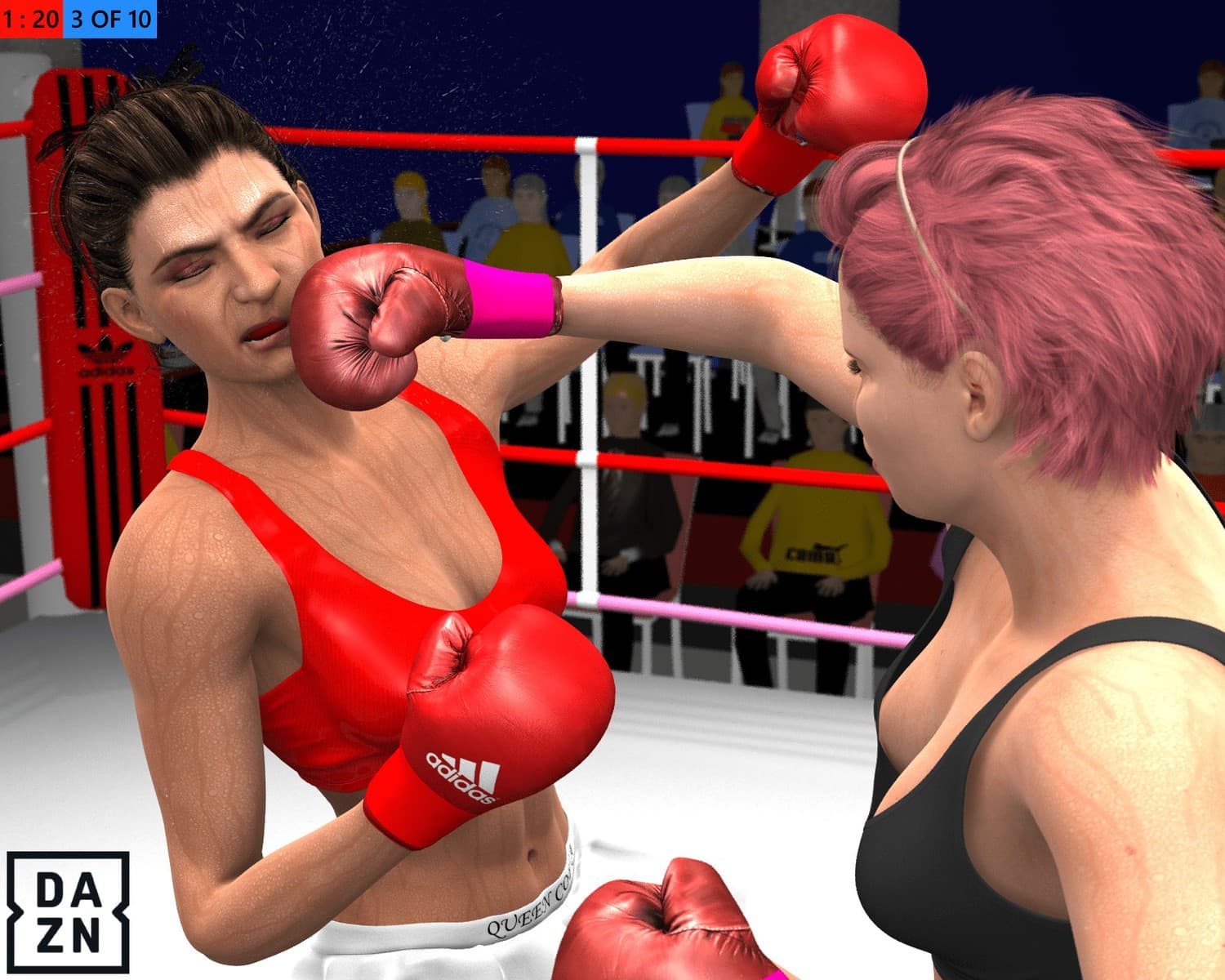 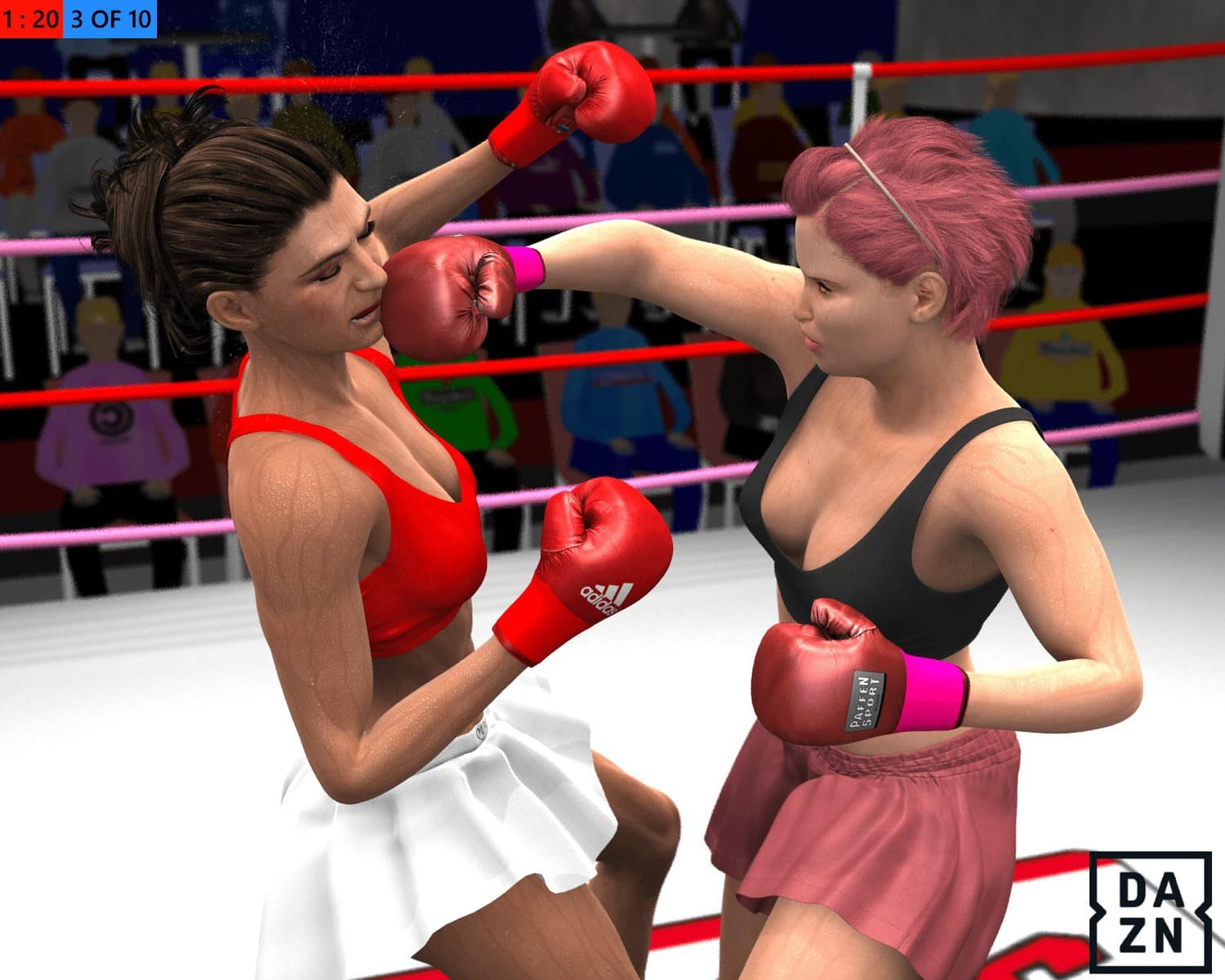 Virani’s legs lose strength after taking two ferocious blows from the hard punching German. She falls backwards landing on her butt before coming to rest flat on her back.

Laila: “MacVicar goes down here in the 3rd! The Canadian’s chin has often been an Achilles’ heel for her, but daresay that Achilles himself would have fallen after taking two mighty jolts from ‘Das Kong.’ The Canadian Cobra will do well to get up from this barrage and will face an uphill battle to survive even if she does beat the count.”

Michela thinks: Pretty girl goes down pretty hard. No one in this division can take the power in these mitts.

Alesia thinks: “Damn. If anyone wondered if they could get knocked down by pink gloves, they know. Surely V can get up from this, though. She’s seen this before.” 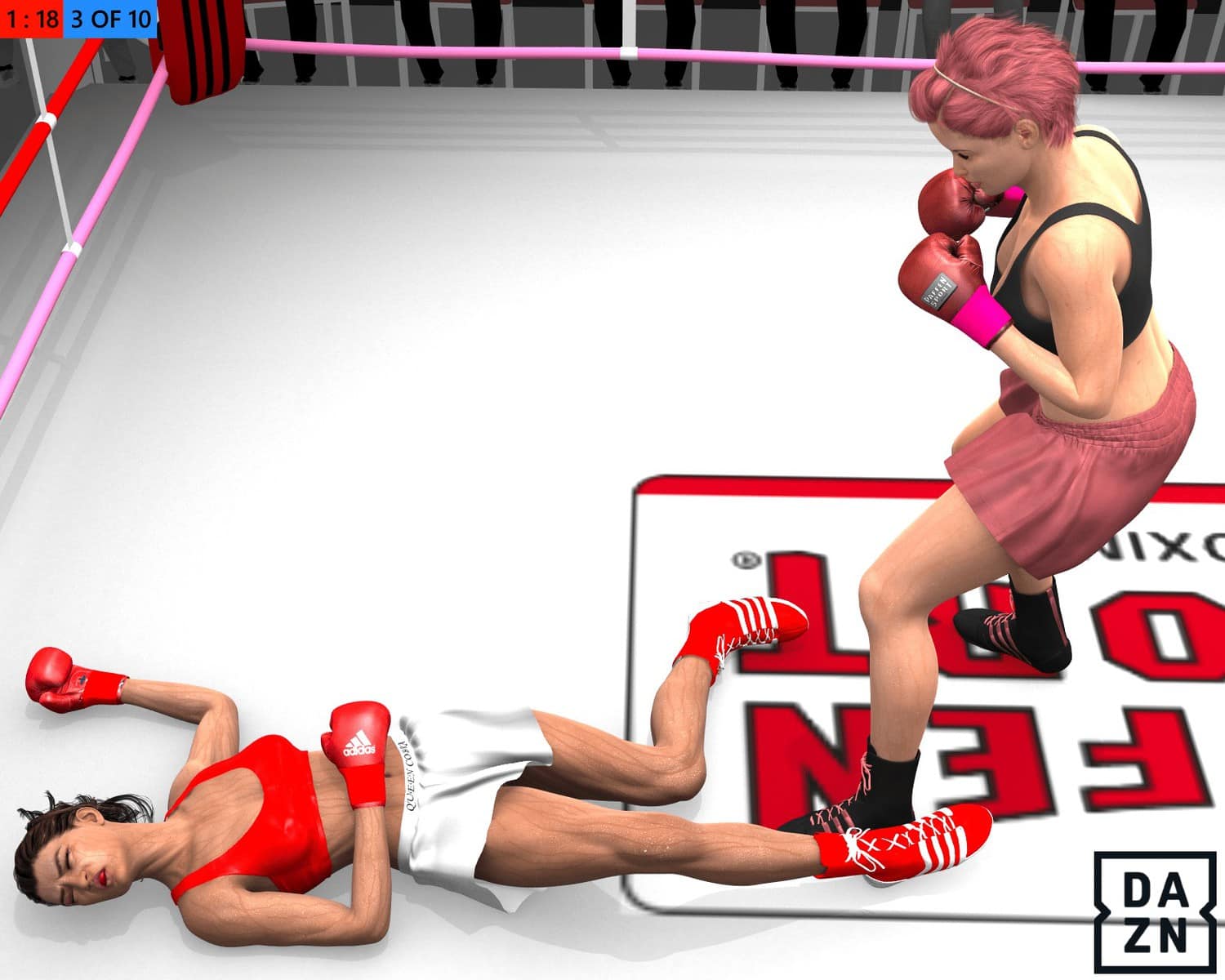 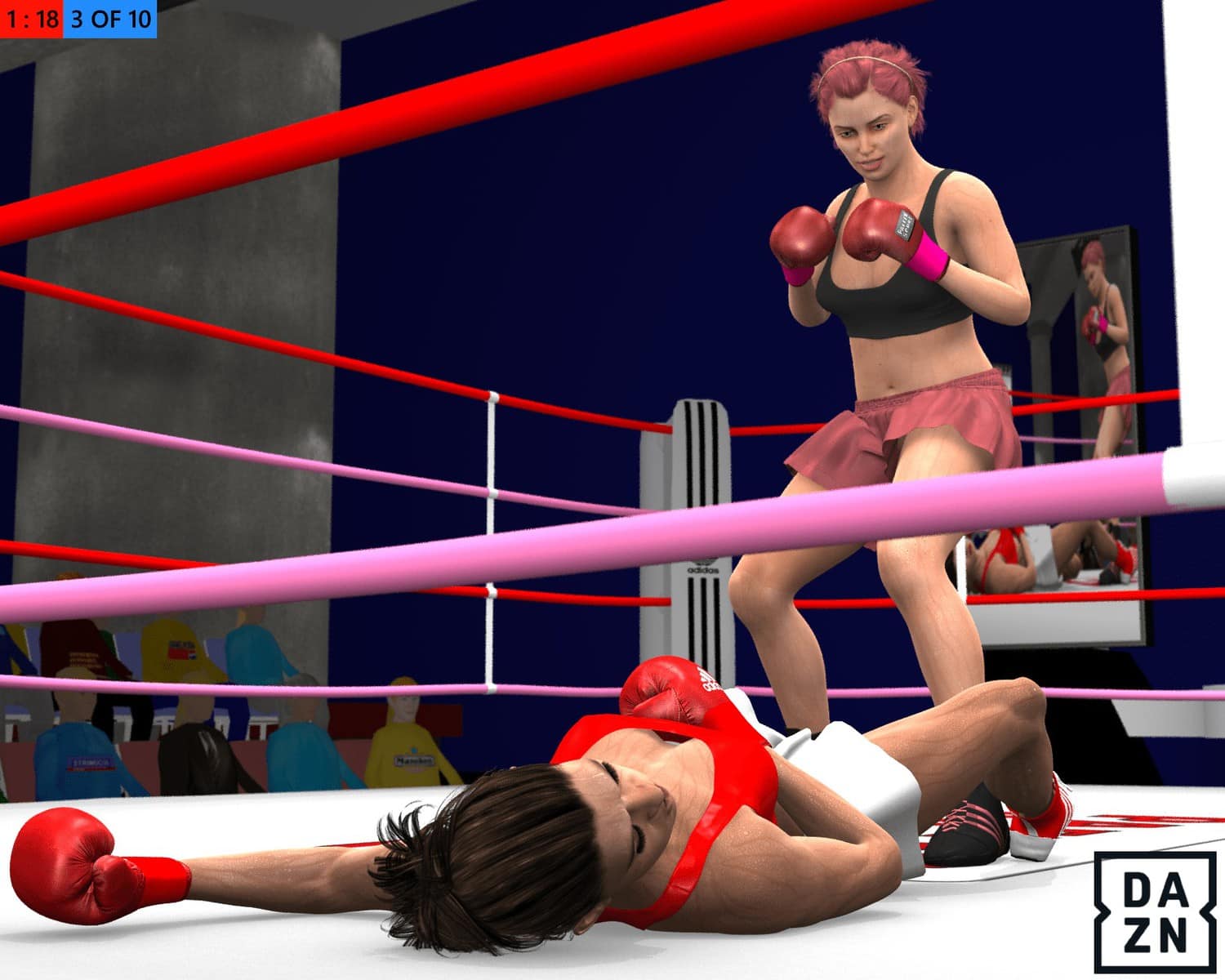 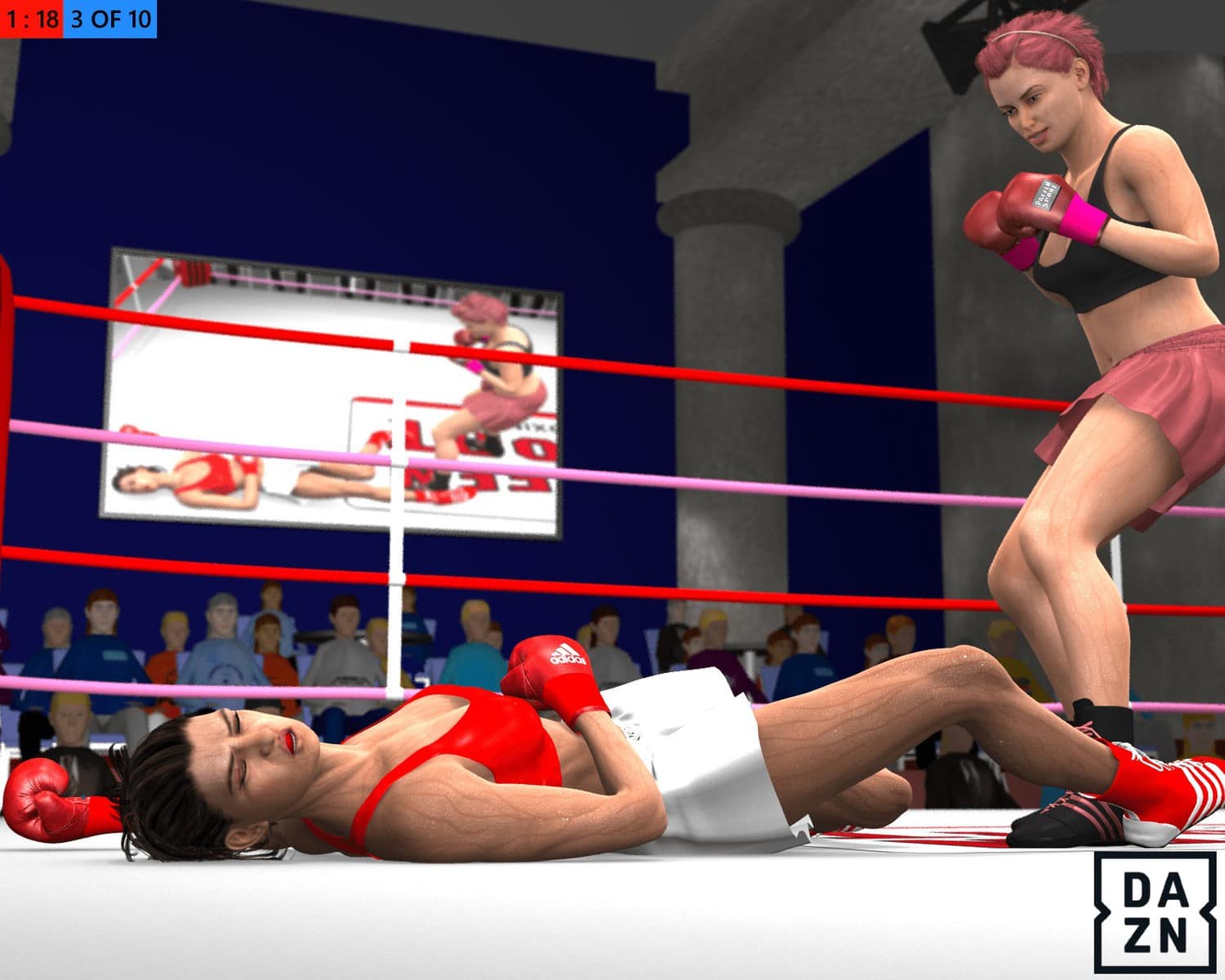 Referee Monique Deschamps is on the scene quickly to send Michaela Sommer to the neutral corner. The German champion confidently jogs in the desired direction, confident that she has altered the course of this fight definitively.

Monique thinks: That’s a big knockdown, but its early in the fight. She’ll get a chance to get up and convince me she can continue.

Virani thinks: Ungh…that hurt. Don’t hear the count so the fight’s either over or it hasn’t started. 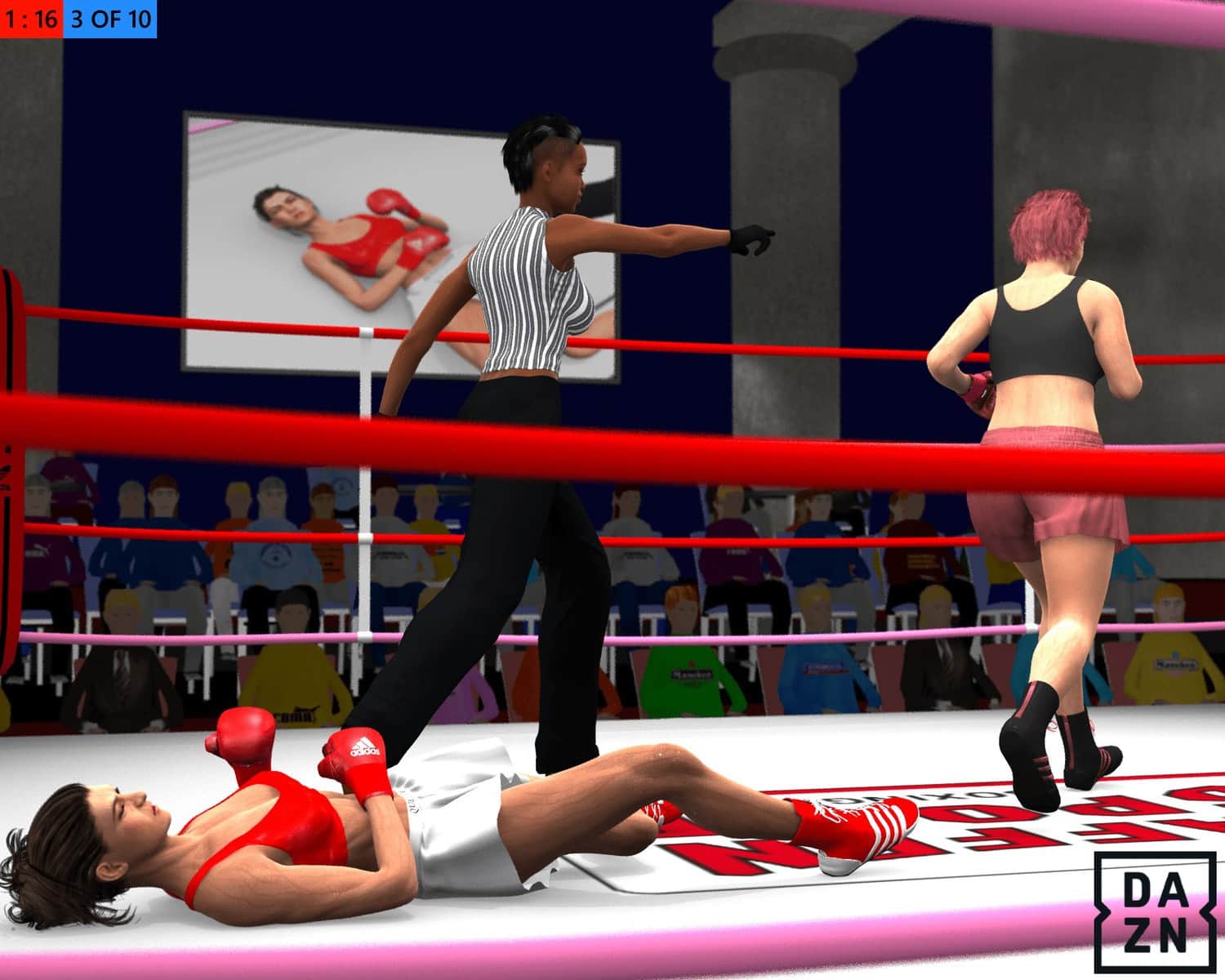 Laila: “MacVicar begins the long trek back to her feet by rolling onto her side. The Canadian still looks a bit shaken after taking those two shots from Sommer, but she doesn’t seem to be too out of it to continue. Of course, that will be for the referee to decide, should Virani get to her feet.”

Michela thinks: That chick is tough. I’ve hit fighters with lesser punches than that and they took the hint and stayed down.

Virani thinks: I’m certainly feeling a bit sluggish after those two bombs, but there’s no way in hell I’m staying down. 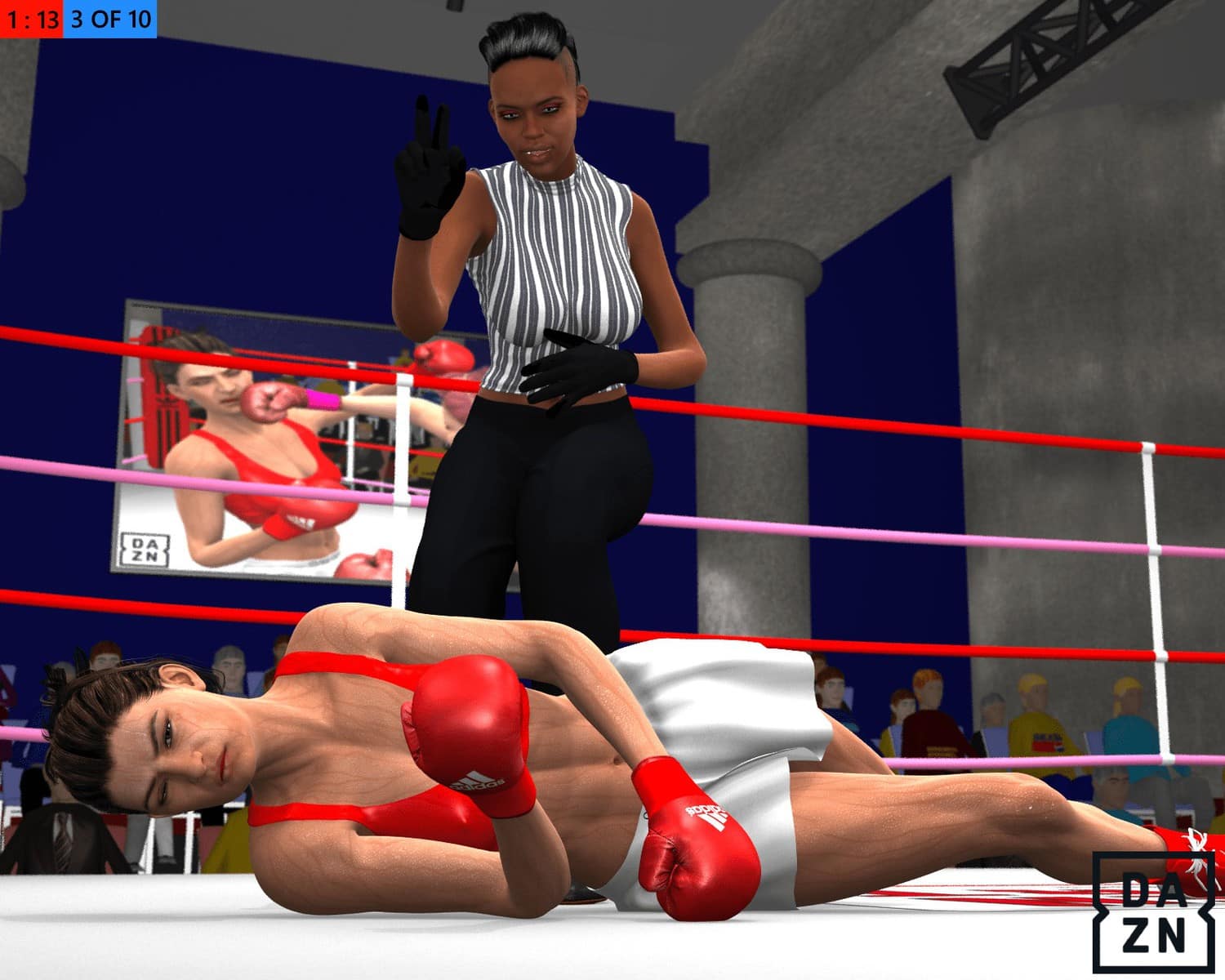 Virani continues her slow, deliberate ascent, using the ropes to help her get up while the count reaches ‘6.’

Laila: “As usual, Virani is showing heart by picking herself off the canvas using all available tools to do so. The Canadian’s chin might not be world-class, but she is a fighter that will never say die, even though she took some ferocious punishment from a fighter that will no doubt look to add more if the fight continues.”

Virani thinks: That’s it, slow and steady. Just beat the count. Time needs to be on my side. 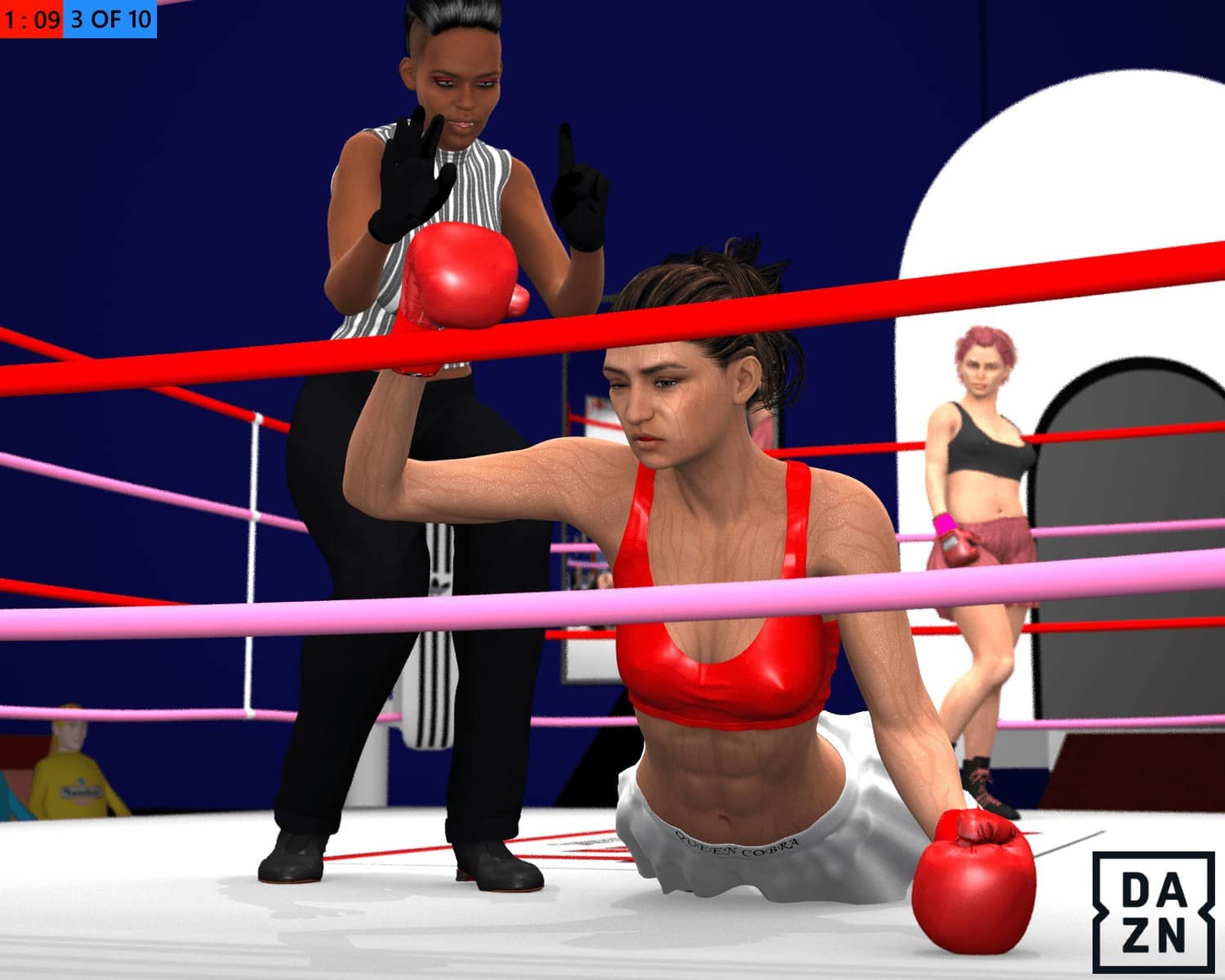 Virani rises to her feet and puts her hands up, signaling a willingness to continue. The Canadian Cobra does not look at her best, but almost certainly is fit to continue.

Monique: “Are you okay? Do you want to continue?”

Monique thinks: She’s hurting but she doesn’t look too bad. I’ll have to keep an eye on her though. 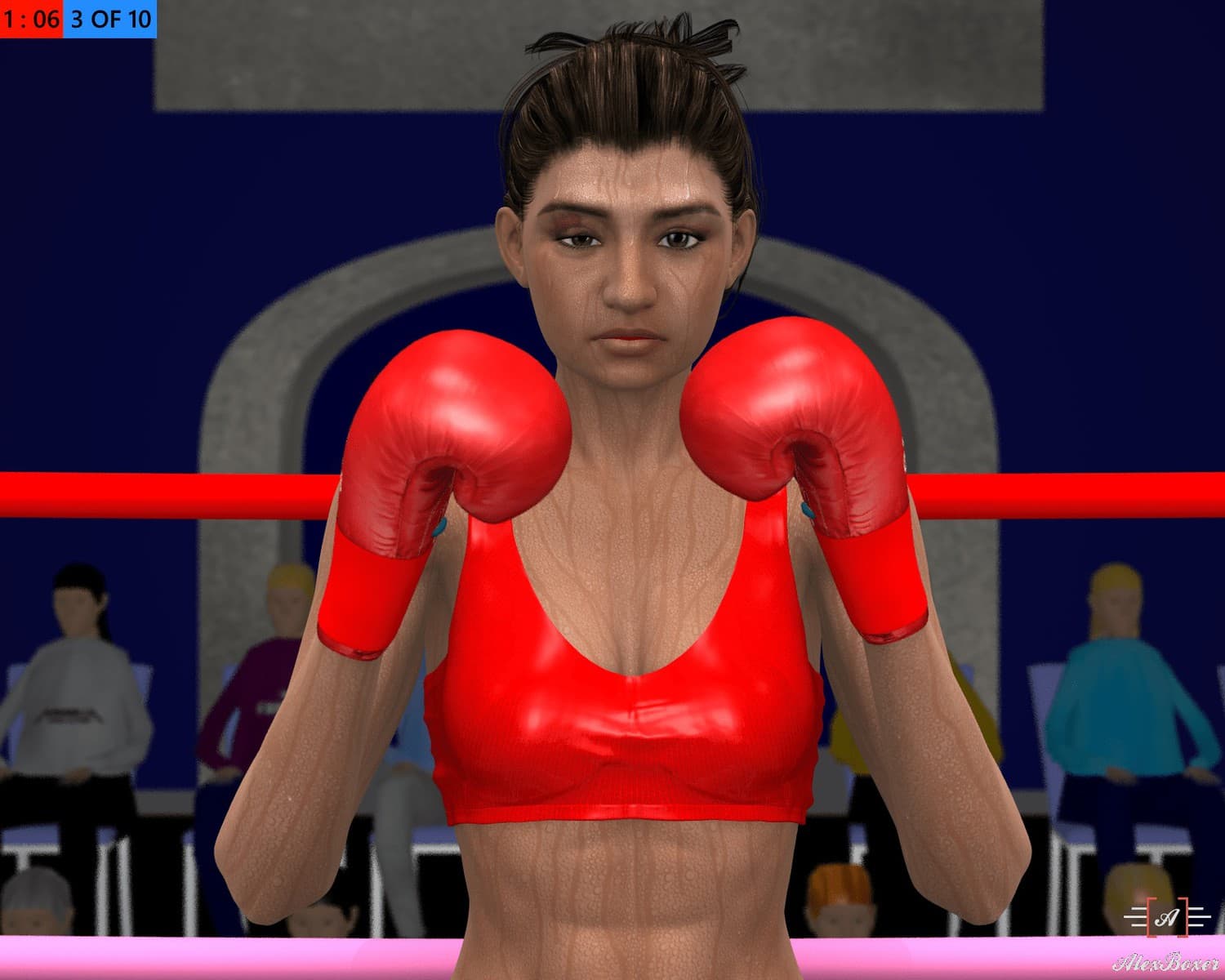 After the knockdown, Virani fights fully on the defensive, rarely engaging with the stout German fighter. The Cobra has been fully de-fanged, only throwing jabs to keep Michaela away from her.

Michaela doesn’t have the success she might have imagined though, as her target slips, blocks and stays out of range of the Michaela’s mitts. Queen Kong is also a bit guilty of swinging for the fences instead of pressuring Virani into making a mistake. Still, she’s winning this round and not taking much, if any punches in reply.

At :27 of the round this is punctuated as Michaela launches a big overhand right that gets Virani leaning back and out of the way of a punch that, if it had connected, would have certainly ended the fight. With Virani’s defensive move, all she feels is air whooshing by. 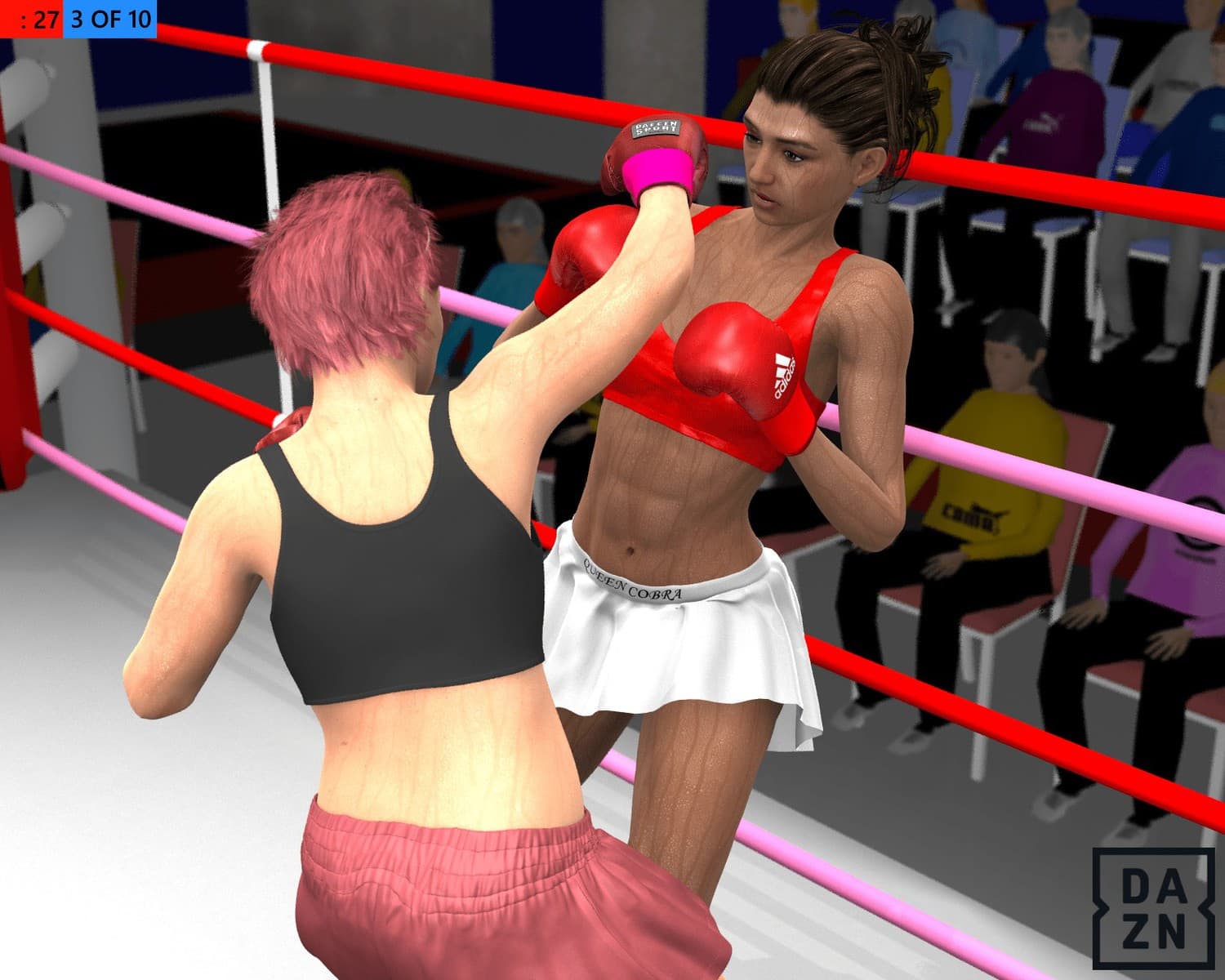 But the German slugger knows that even a missed punch can be an opportunity as she thuds home a short left hook to the liver area of Virani, who grunts painfully having not been able to use her elbows to protect the sensitive area.

Laila: “Sommer’s best punch after the knockdown is another punch delivered from in tight as her left hook finds MacVicar’s liver. She must have just missed the sweet spot, because the Canadian is able to slip away, but that is a warning sign that Michaela Sommer will use her hooks to the head and to the body and she can hurt you with both.” 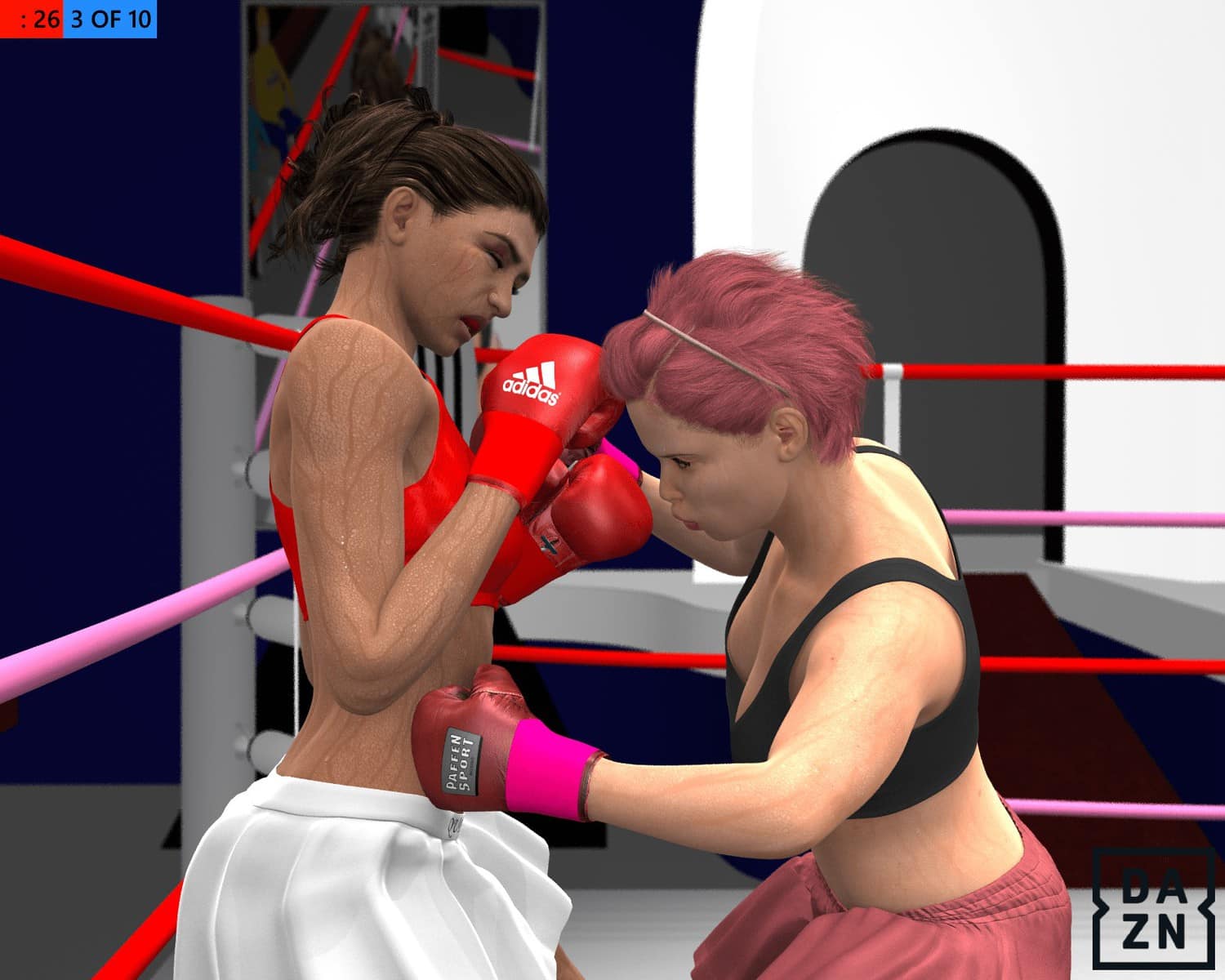 The last 20 seconds of the round are all Michaela. She pressures Virani around the ring as the Canadian is desperate for a respite from the powerful puncher. Sommer isn’t able to land the telling blow to send Virani down again, but she does land more punches that batter the former Canadian champion. At the end of the round, Virani is trapped in the corner, trying to guard against the incoming power shots from Michaela, only to be saved by the bell.

Laila: “And the bell will ring on this 3rd round here, and not too soon for Virani MacVicar as she was trapped in the corner and seemed to be on the way to being stopped. However, instead of Monique Deschamps intervening to stop the fight, she will intervene to send the fighters to their corners. Sommer will claim a 10-8 round and a commanding lead in the fight.”

Michaela thinks: Almost had you, Cobra. You’re going to be mine in the next round.

Virani thinks: That bell came none too soon. I was ready to go…

Alesia thinks: “Wow. She owned her in this round. Who’s the last to have done that? Totally Masae. I think V is more resilient than before, though. She’ll come back. And fuck it, I’m getting a beer. Need it.” 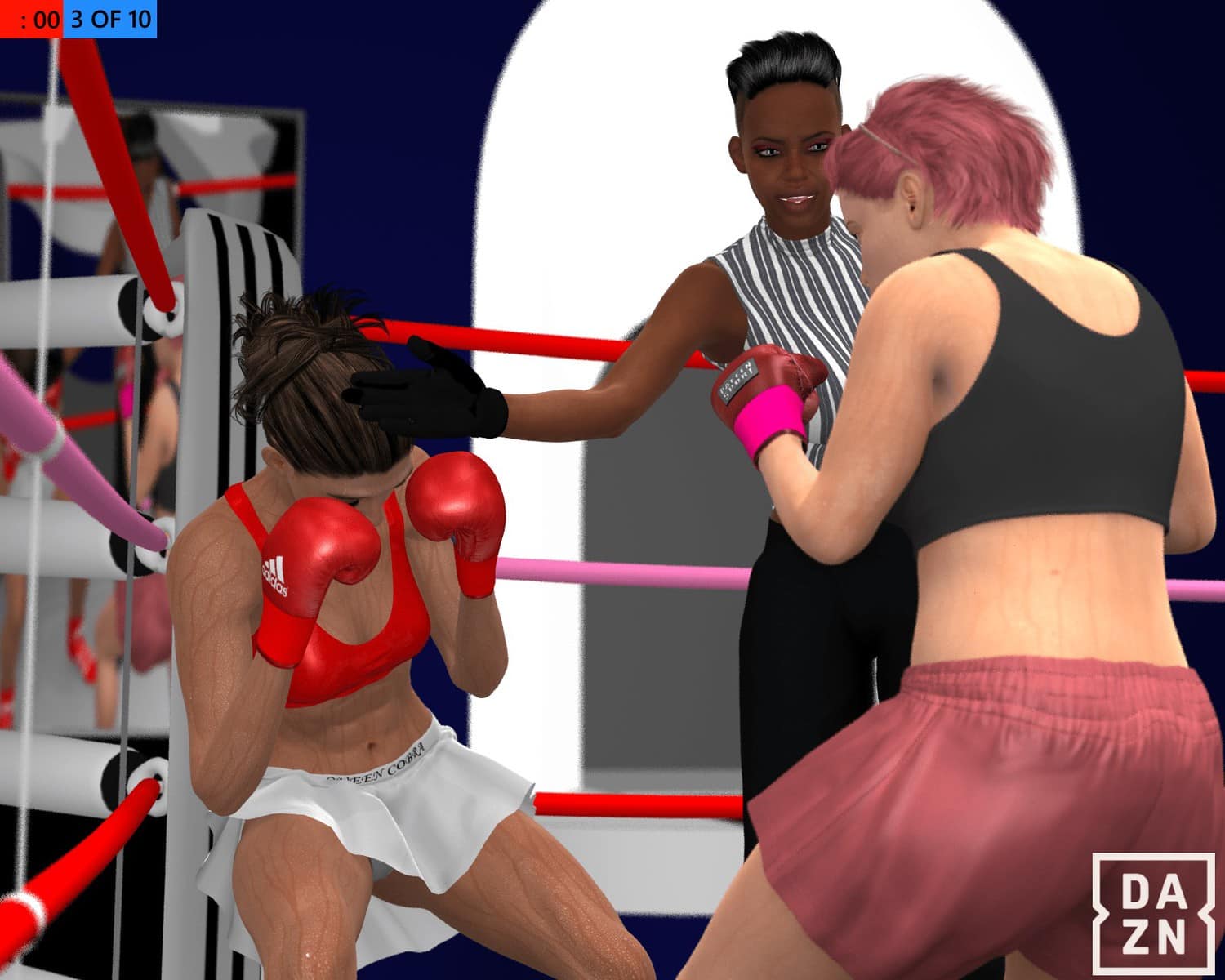 The fighters retreat to their corners for a minute of rest.

In Michaela Sommer’s corner, the message is simple to keep it up.  Axel Plesner wants his charge to also focus on going to the body to take the starch out of the Canadian.  Michaela and coach is quite happy with how things are proceeding.  The power game of the German is ascendant at the moment.

In Virani MacVicar’s corner, the tone is a bit more dire.

Virani: I’ve mostly recovered, but damn, that girl has anvils for hands.  I can’t trade with her at all.  She’ll lay me out.

Virani: It’s not exactly what I practiced.

Thomas: It’s what we need.  Fight from a lower position  so that you can more easily protect the body.  Fighting upright isn’t going to get us anywhere.  And if you can…make sure she feels your power too. 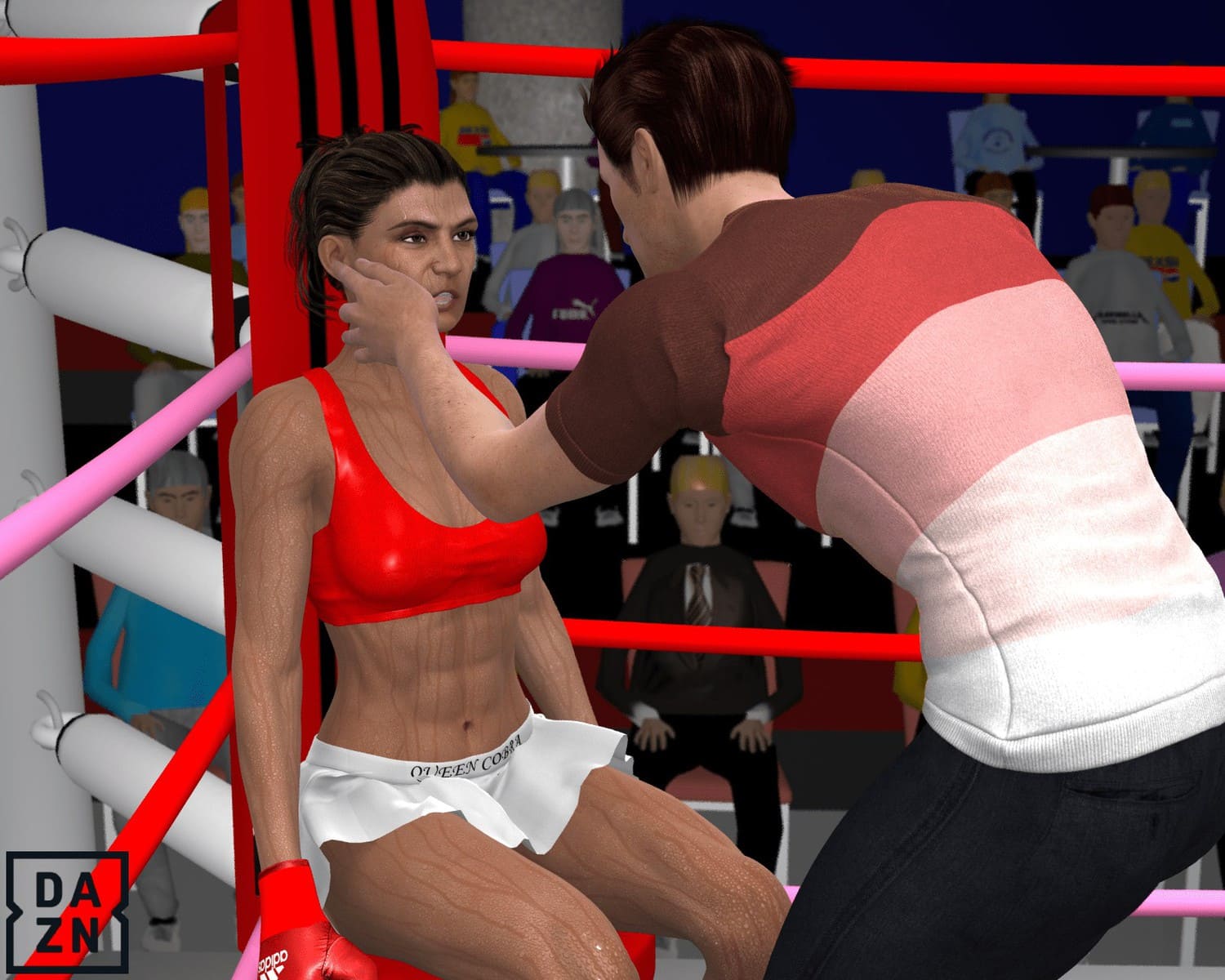 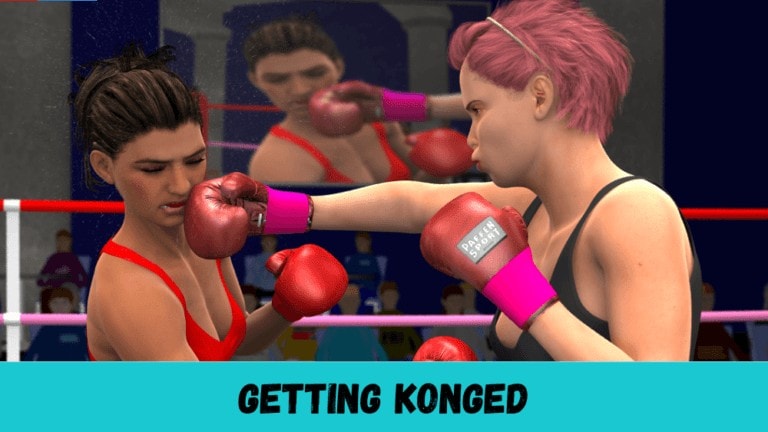 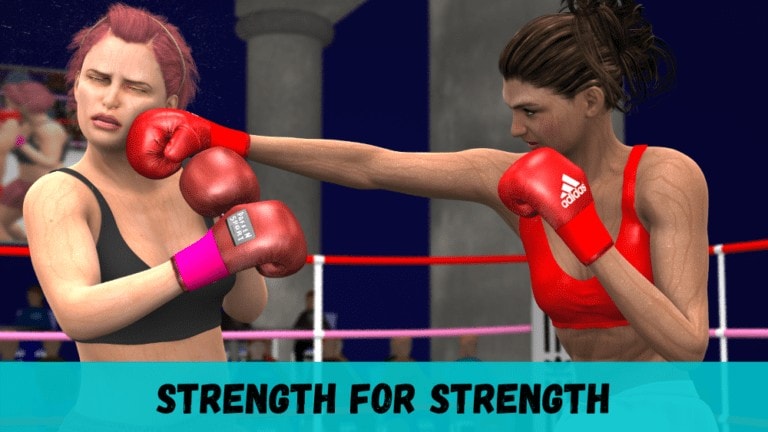