The Lady Bends the Rules

The two combatants rise from their stools before the bell rings for round 2. In contrast to the first round, this time Virani takes the middle of the ring authoritatively, throwing a few jabs at Steffi to dissuade her from fighting her for it.

Steffi comes out with a different approach, staying quick and elusive on the outside. The two fighters trade long range jabs as Steffi gradually forces Virani back. Then, without warning, Steffi lowers her head and charges in, pushing Virani back until her back is pressed against the ropes. Steffi intentionally presses her left arm against Virani’s neck, forcing her backwards, off balance… 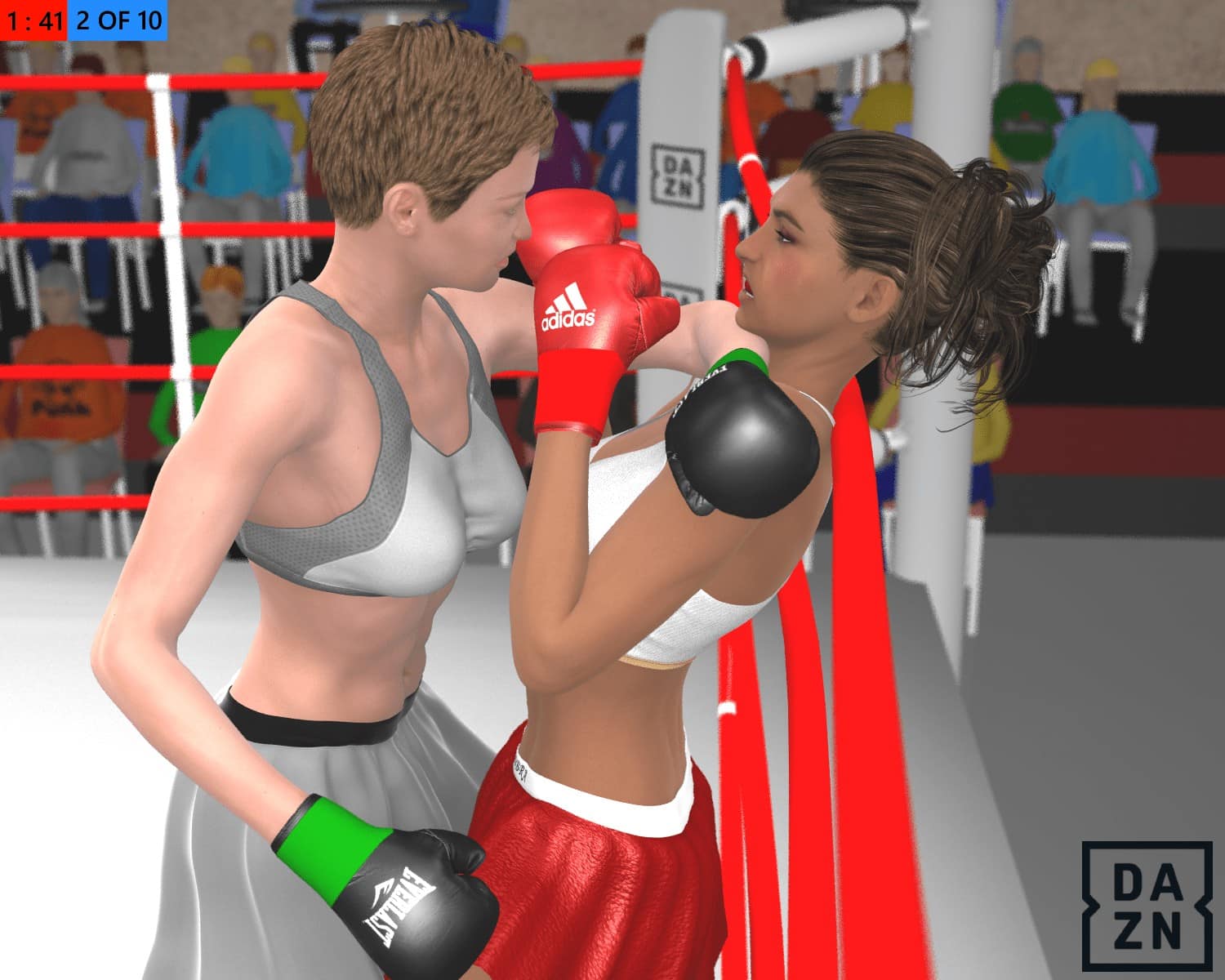 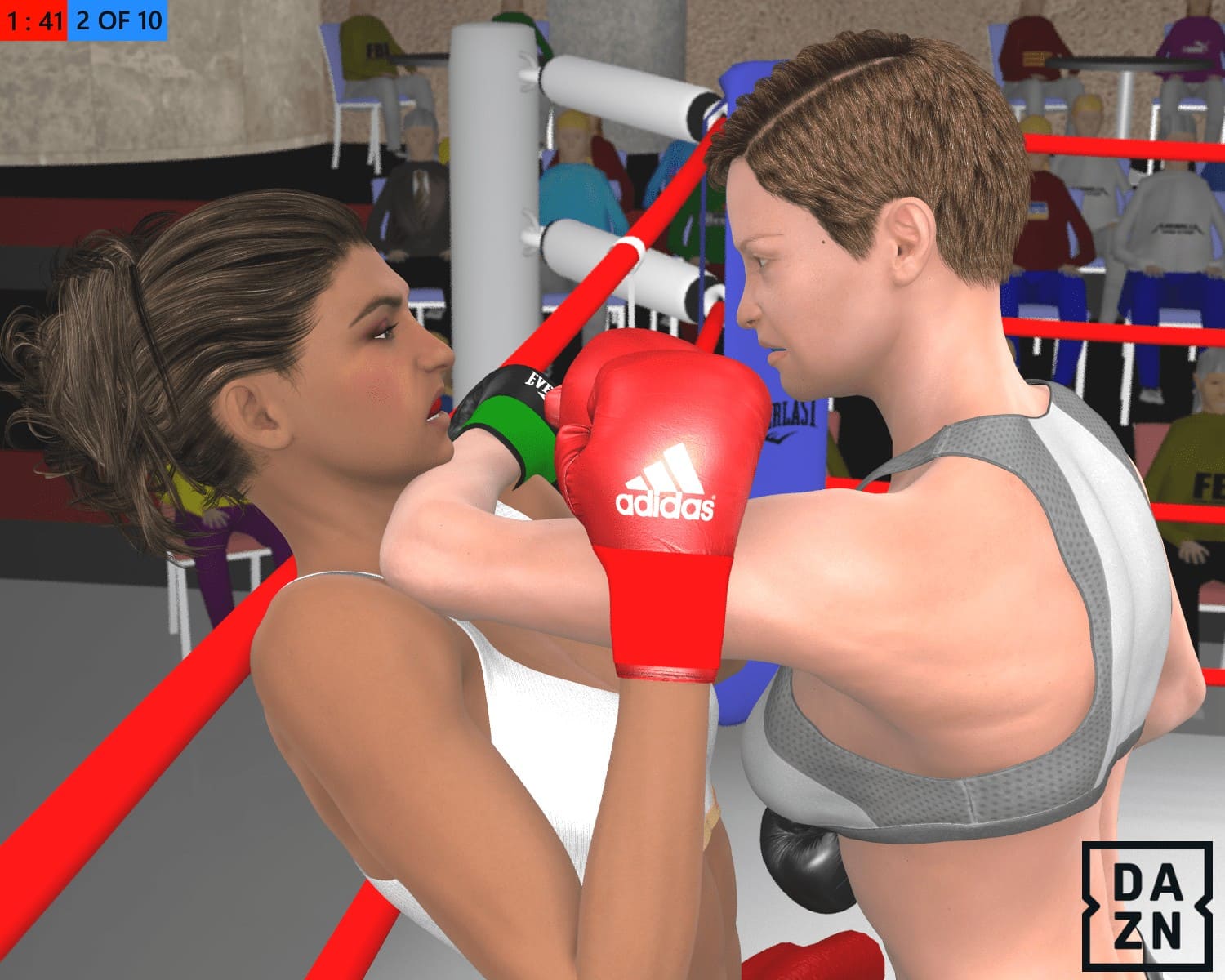 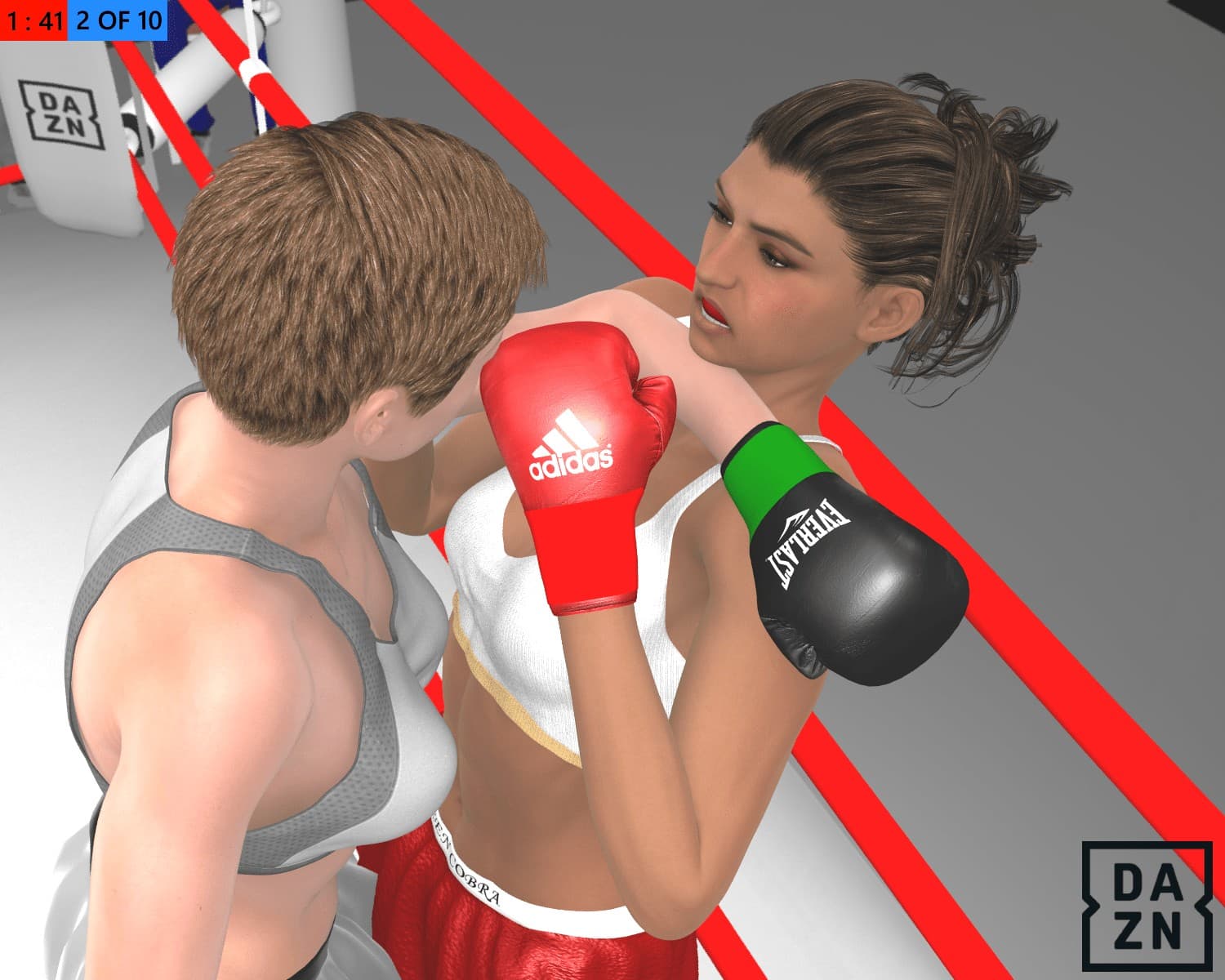 …And then smacks Virani with a crisp right hook that the Canadian had little hope in defending against, given she had just been fighting a grappling contest a moment earlier.

Laila Ali: “Some, well, ‘unorthodox’ are being used here by Steffi Slater to get the advantage here. First she pushes Virani back into the ropes, then she blasts Virani with a right hand while the two grapple in close. The punch itself was probably legal, the move to get Virani into the ropes…well, that’s the type of thing that gets even the usually docile Kanti Agrawal involved.” 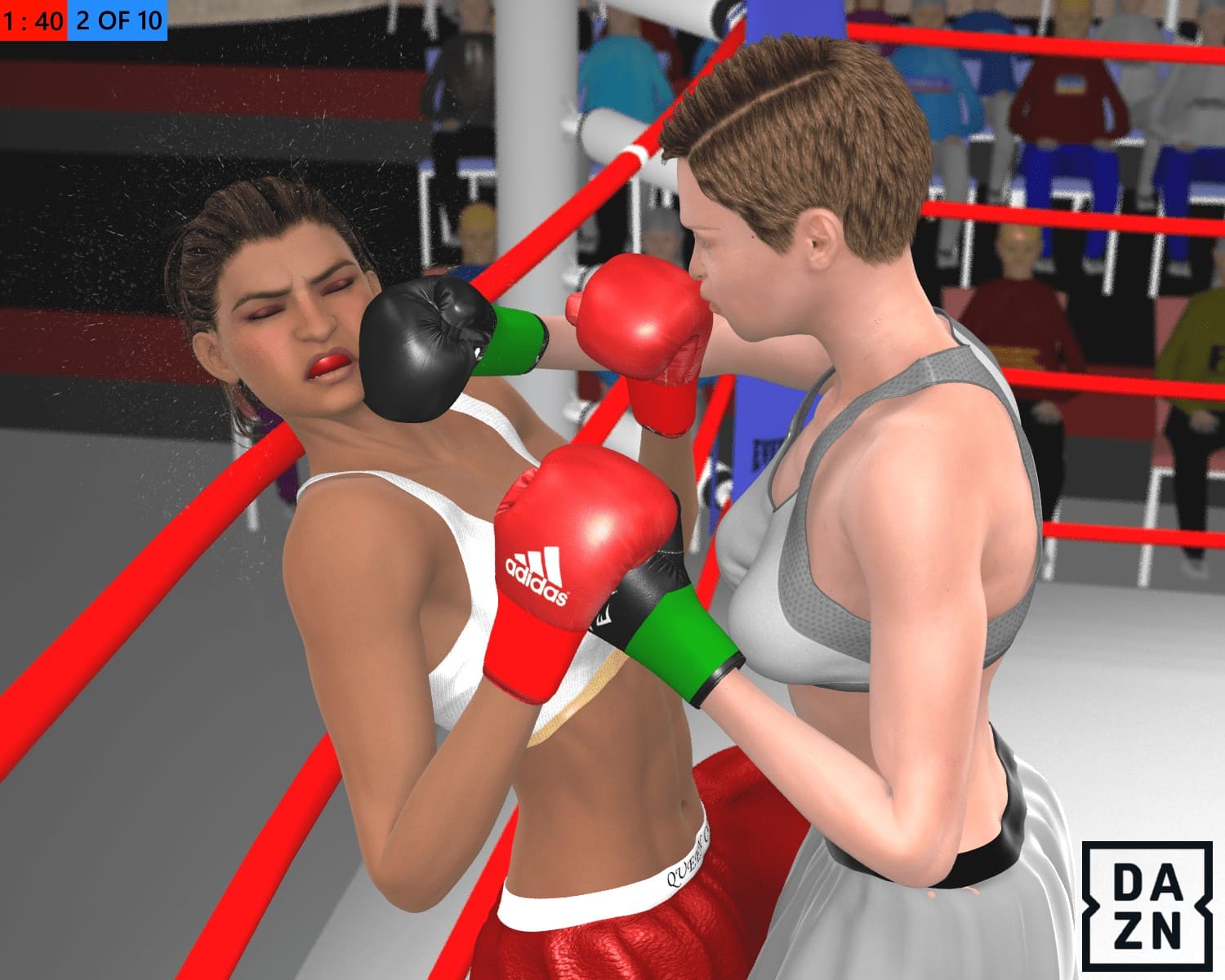 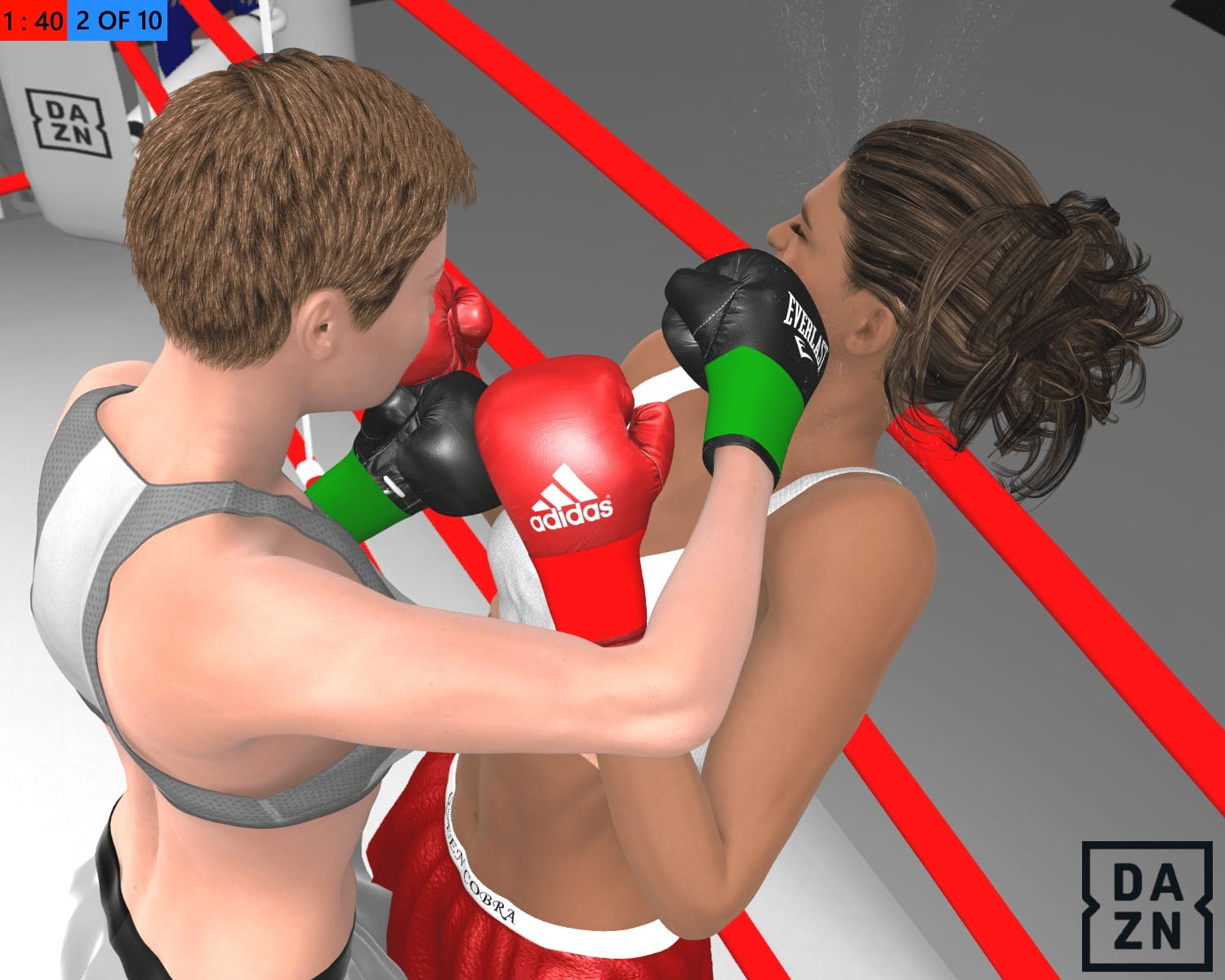 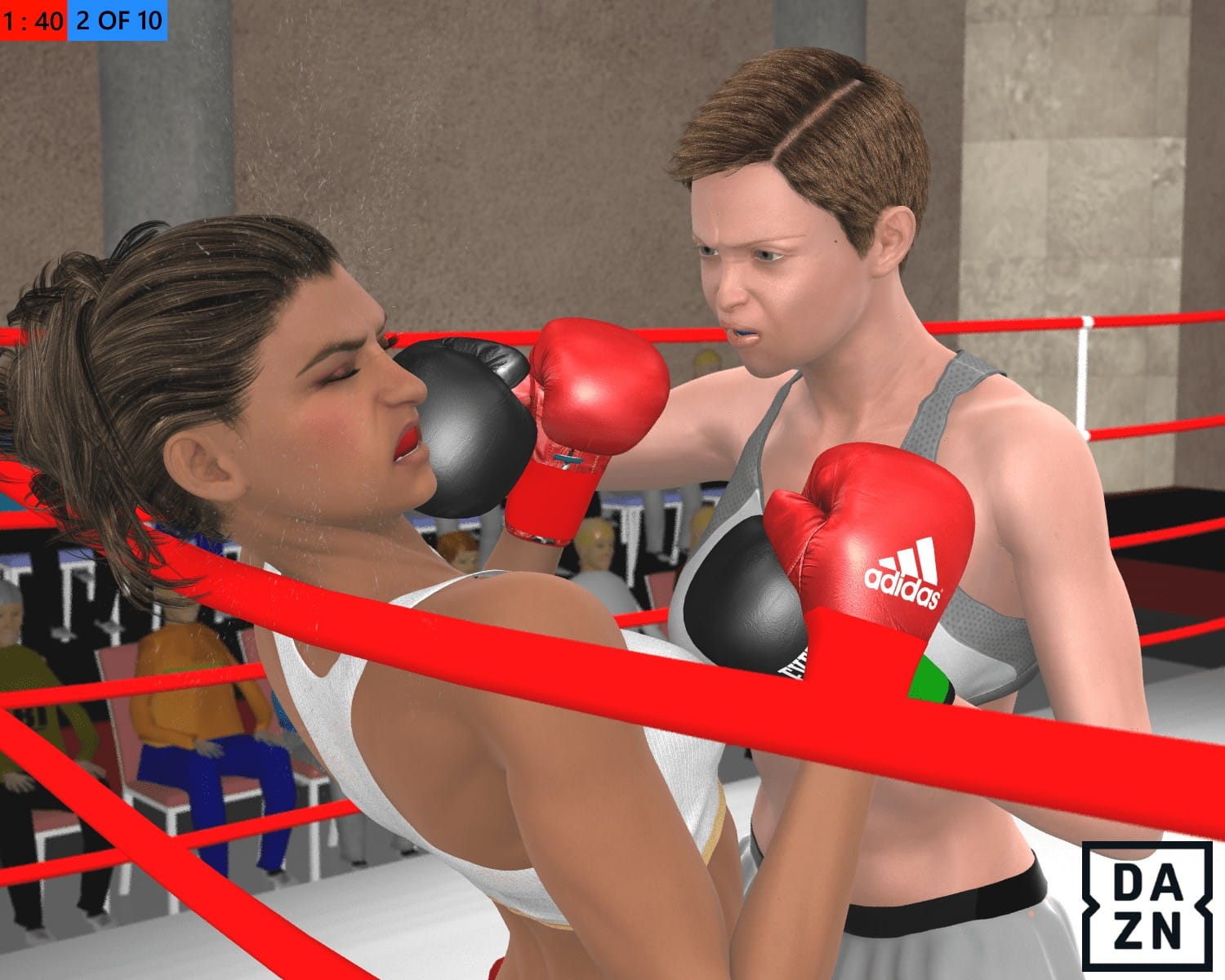 Kanti thinks: Why can’t these two just punch each other legally?

Virani: “Ref, did you see that! Do something!”

Steffi: “This is a boxing ring, not a dance floor. Body contact is encouraged!”

Virani: “You want to punch? Fight legally you old cow!”

Kanti: “Both of you shut it! Steffi, I don’t want to see anymore grappling, okay! And Virani, I’ll do the bloody reffing here!”

Laila: “Tempers are running high here early in the 2nd round as referee Kanti Agrawal struggles to keep these two hellcats from bending the rules. One has to suspect that this might be Steffi Slater’s gameplan – unsettle the younger Canadian and lure her into Steffi’s kind of fight.” 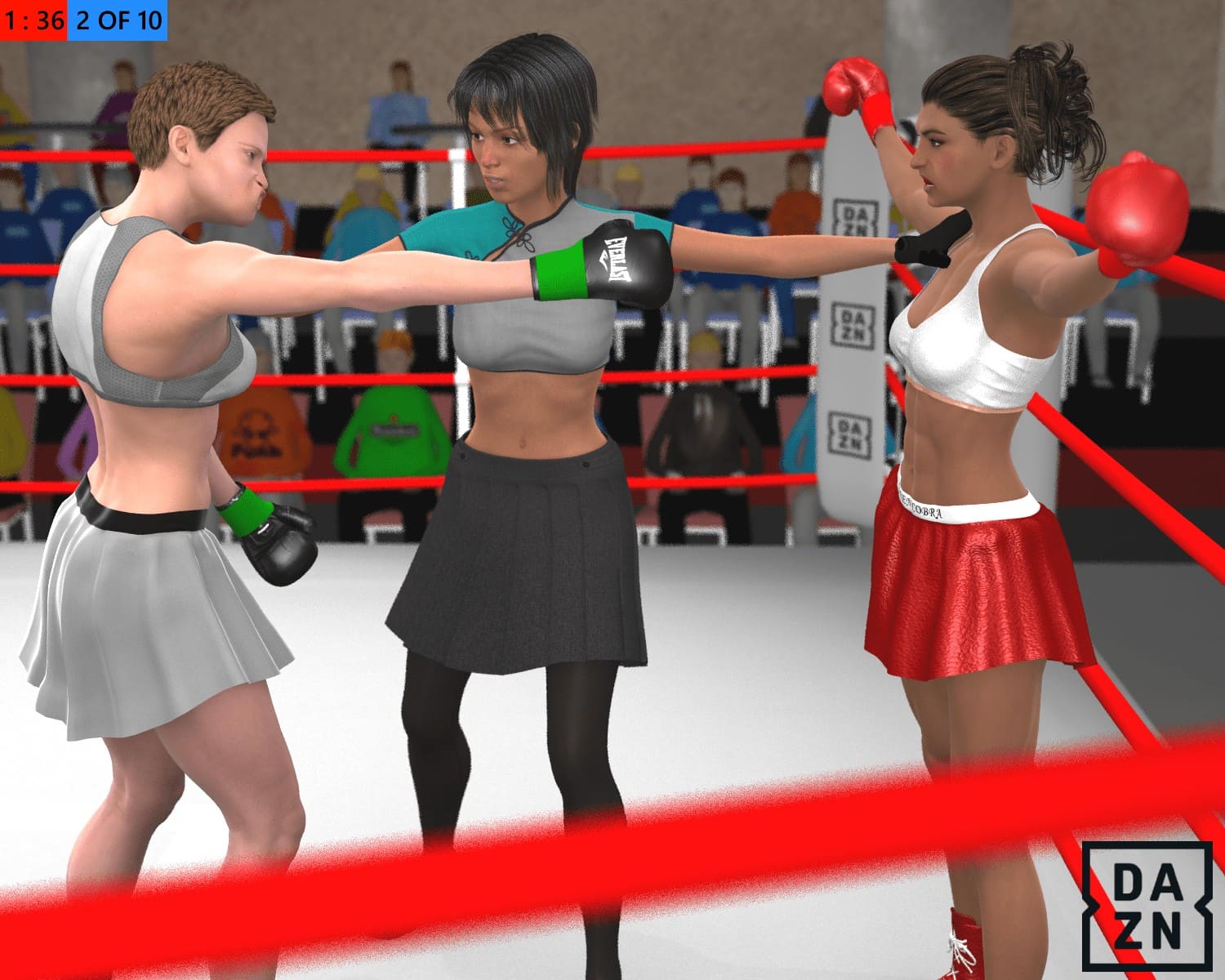 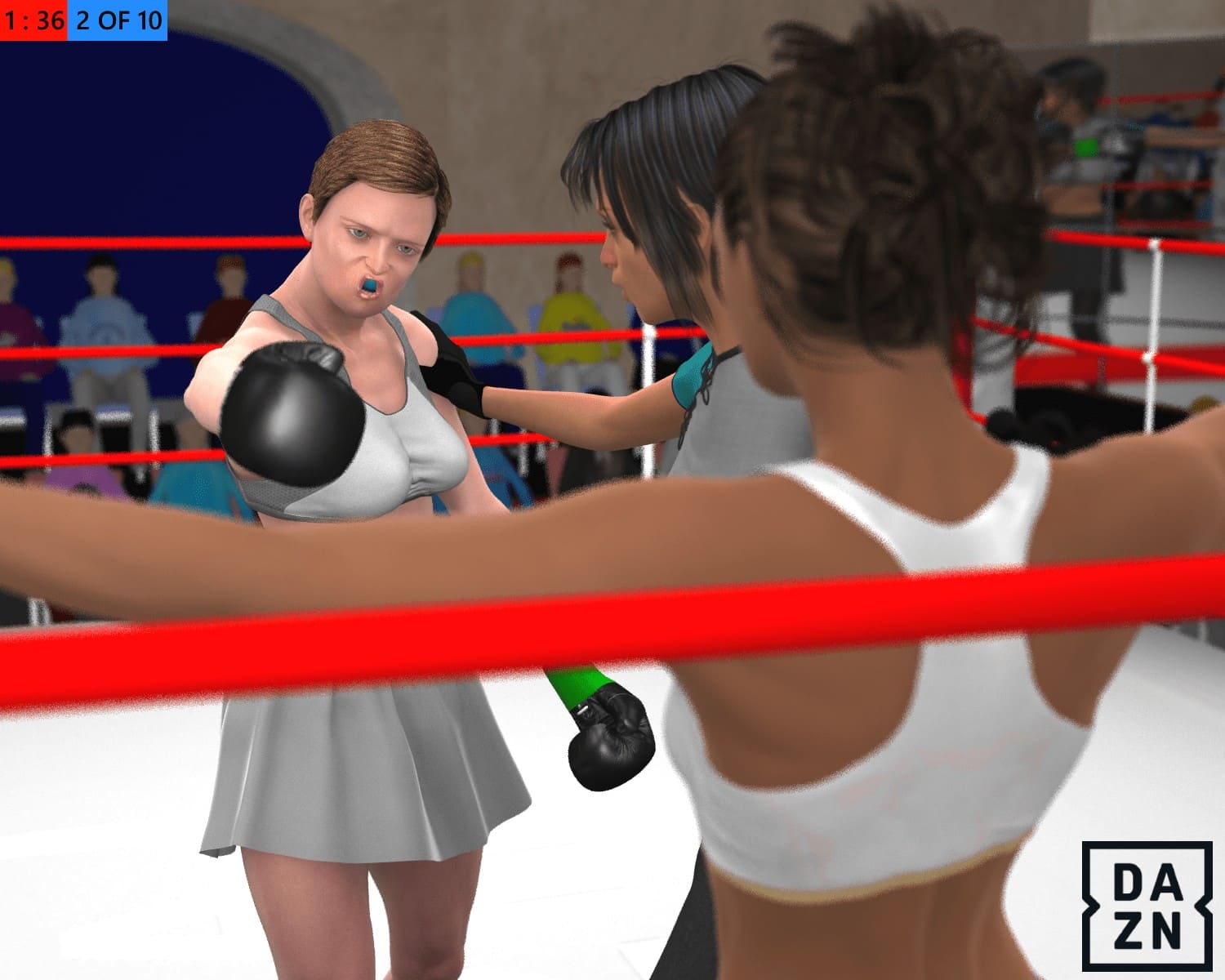 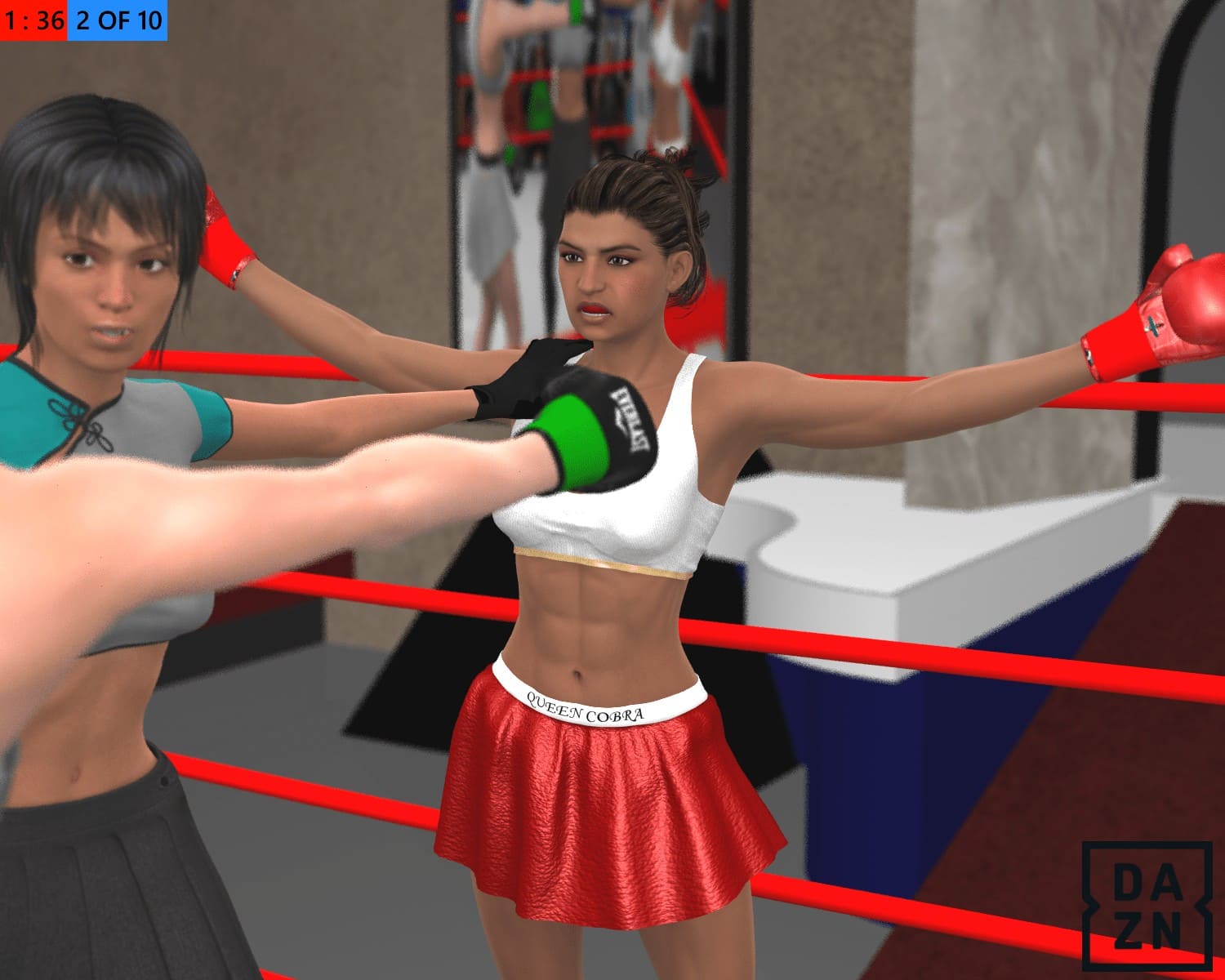 Virani may not need that reminder, but it certainly helps keep her mind focused on the task at hand. The Canadian Cobra boxes mostly at a distance, not letting Steffi close the range easily. The Cobra is a patient snake early in this fight, knowing that she has an early lead after that 1st round knockdown.

Forced into action Steffi tries to gauge the younger girl’s reactions to fakes and feints. Steffi feints to get Virani to commit, but Virani doesn’t bite. Instead, Steffi tries to bait Virani’s jab, which she does. Steffi tries to catch Virani with a right hand, but Virani’s already leaning way to her left to bring forward a massive overhand right. It connects flush on Steffi’s face, forcing a massive grunt from the American as her nose is temporarily flattened.

Laila: “Woof! A big, short, right hand from the Canadian Cobra gives Steffi her some reconstructive surgery for free. That kind of punch is the best sort of revenge.   Legal.  Savage.” 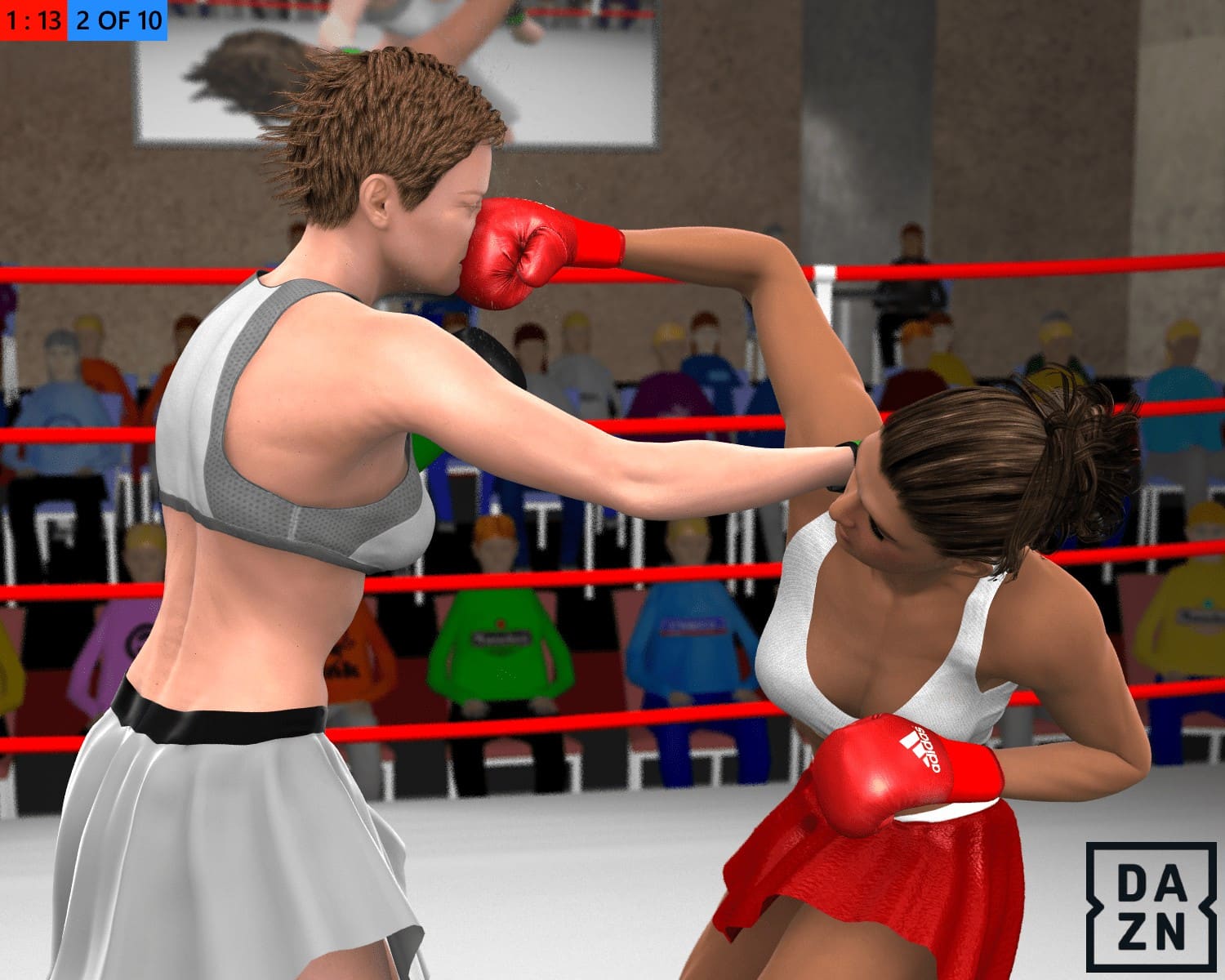 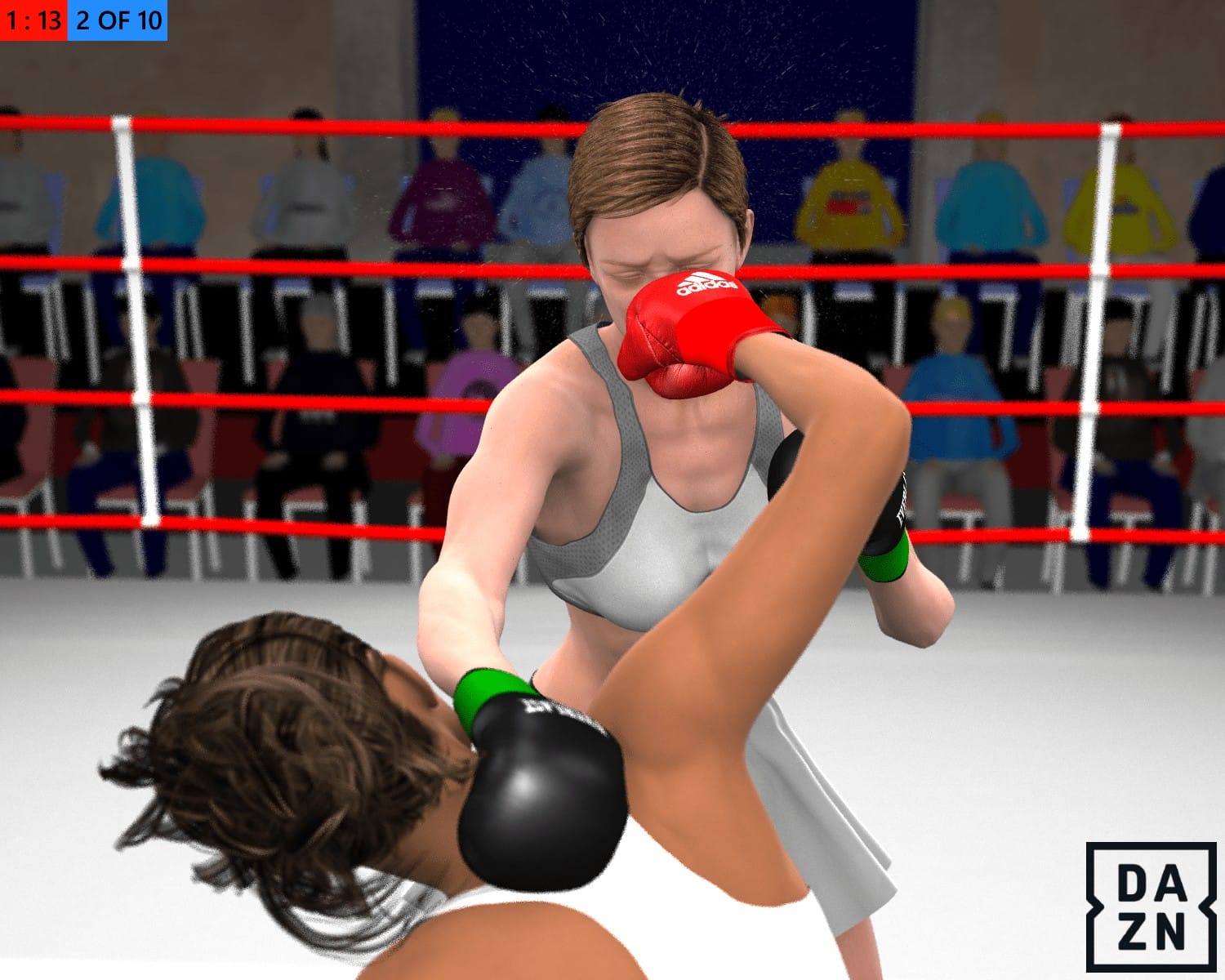 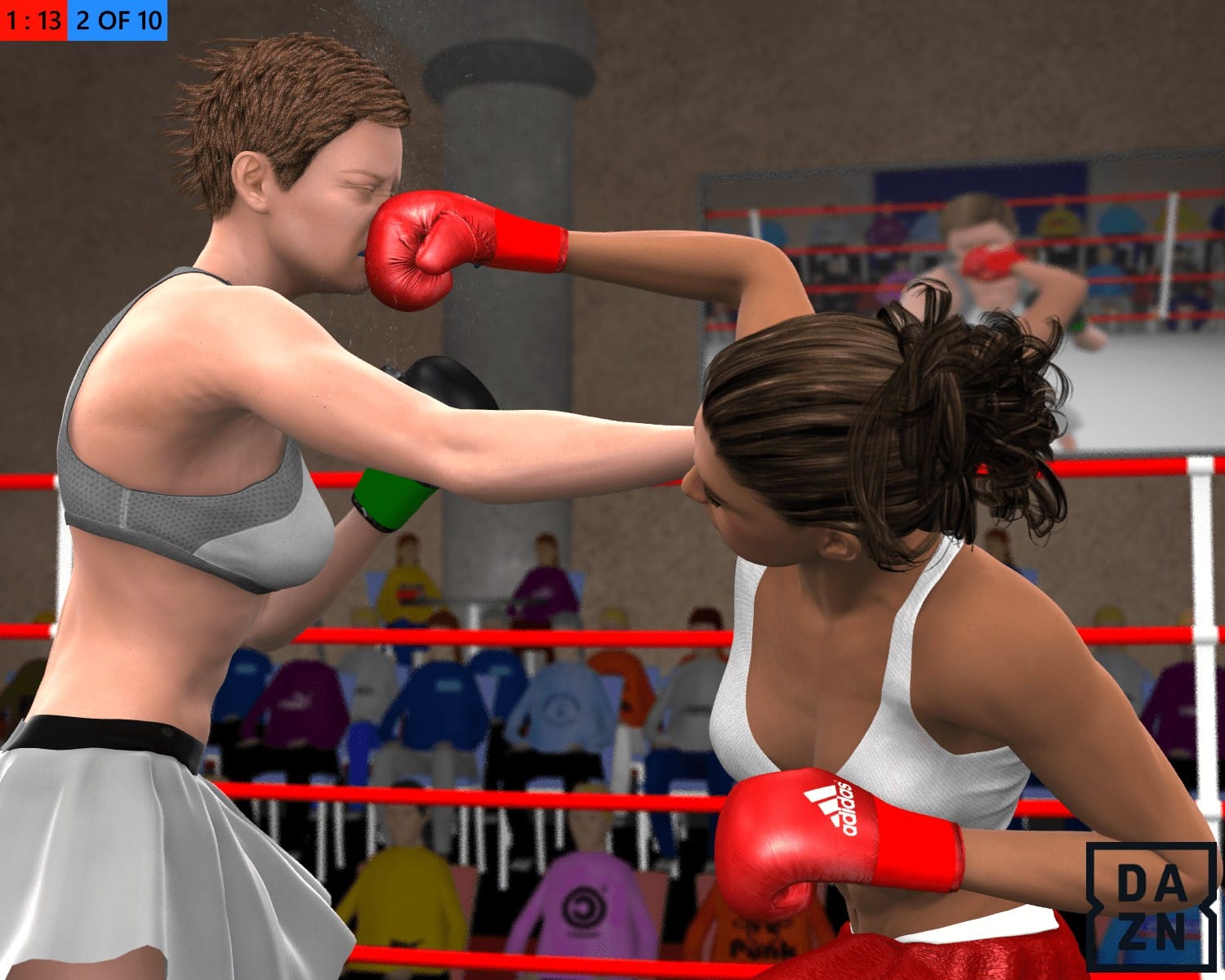 Virani continues to be patient, knowing that she has ten long rounds to dish leather out. She avoids Steffi when she comes into range, wanting to be the one that initiates the action. This isn’t what Steffi expected from Virani and she seems a bit out of sorts in this round.

When Virani does decide to get in punching range, the Cobra is quick, efficient and powerful as she hits and fades, doing damage without wanting to get into a protracted fight. With 51 seconds left in the 2nd round, the Canadian Cobra strikes with a solid right hand that stings Steffi as she tries to lean to her left.

Laila: “The Canadian Cobra picks up on the movements of Steffi Slater and makes her pay with a cunning right hand. That’s a nice punch from the Canadian, who has had the upper hand so far in this fight.” 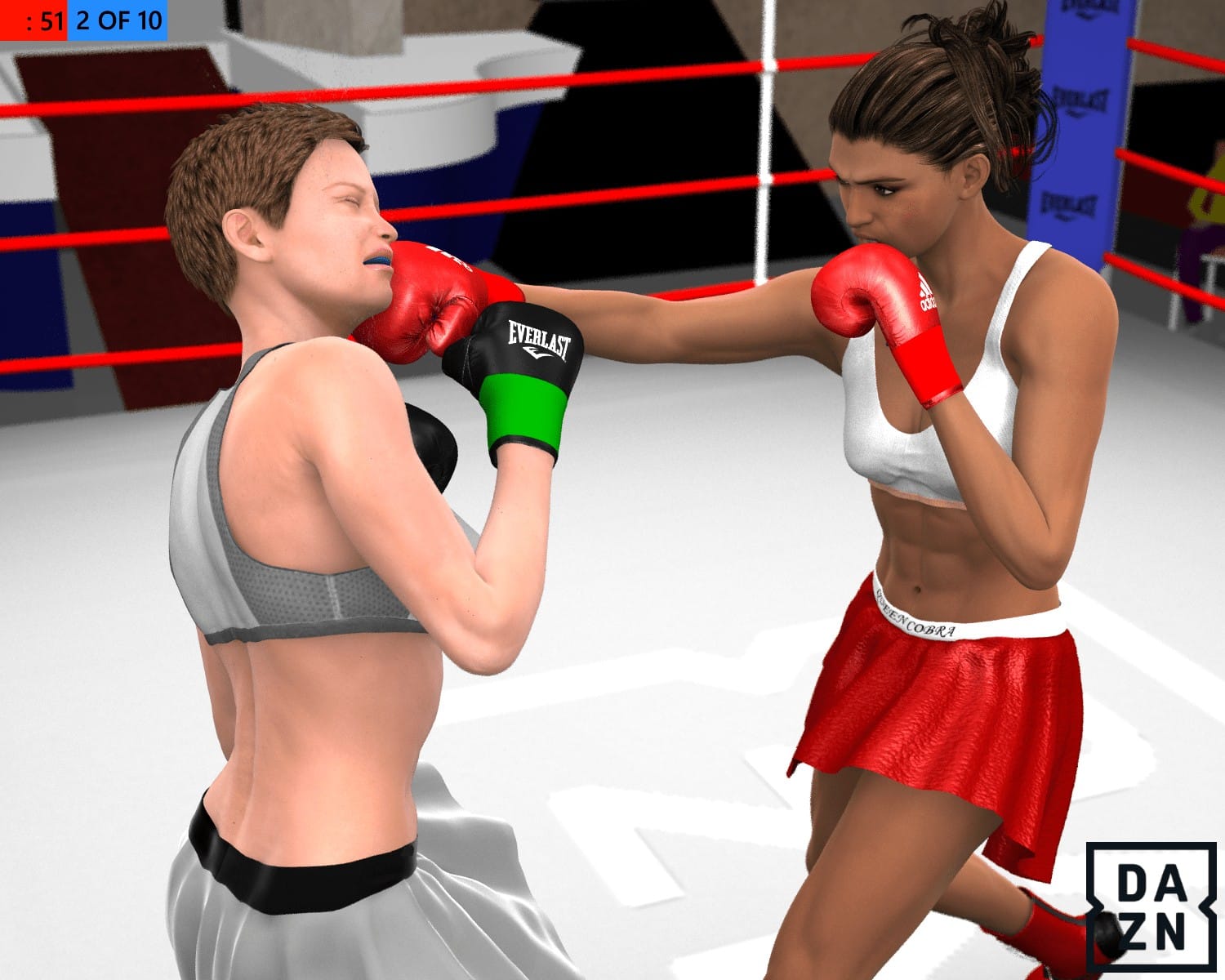 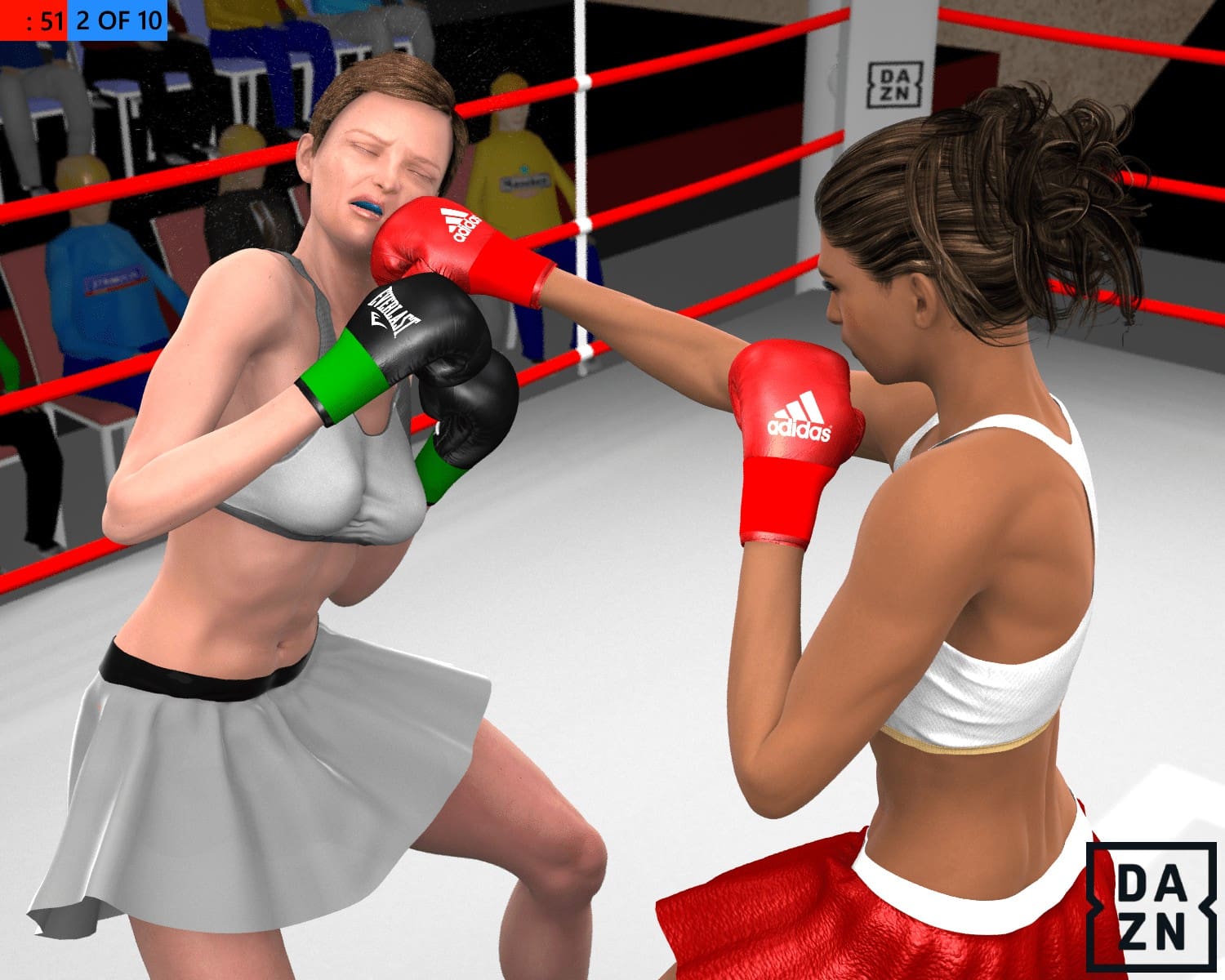 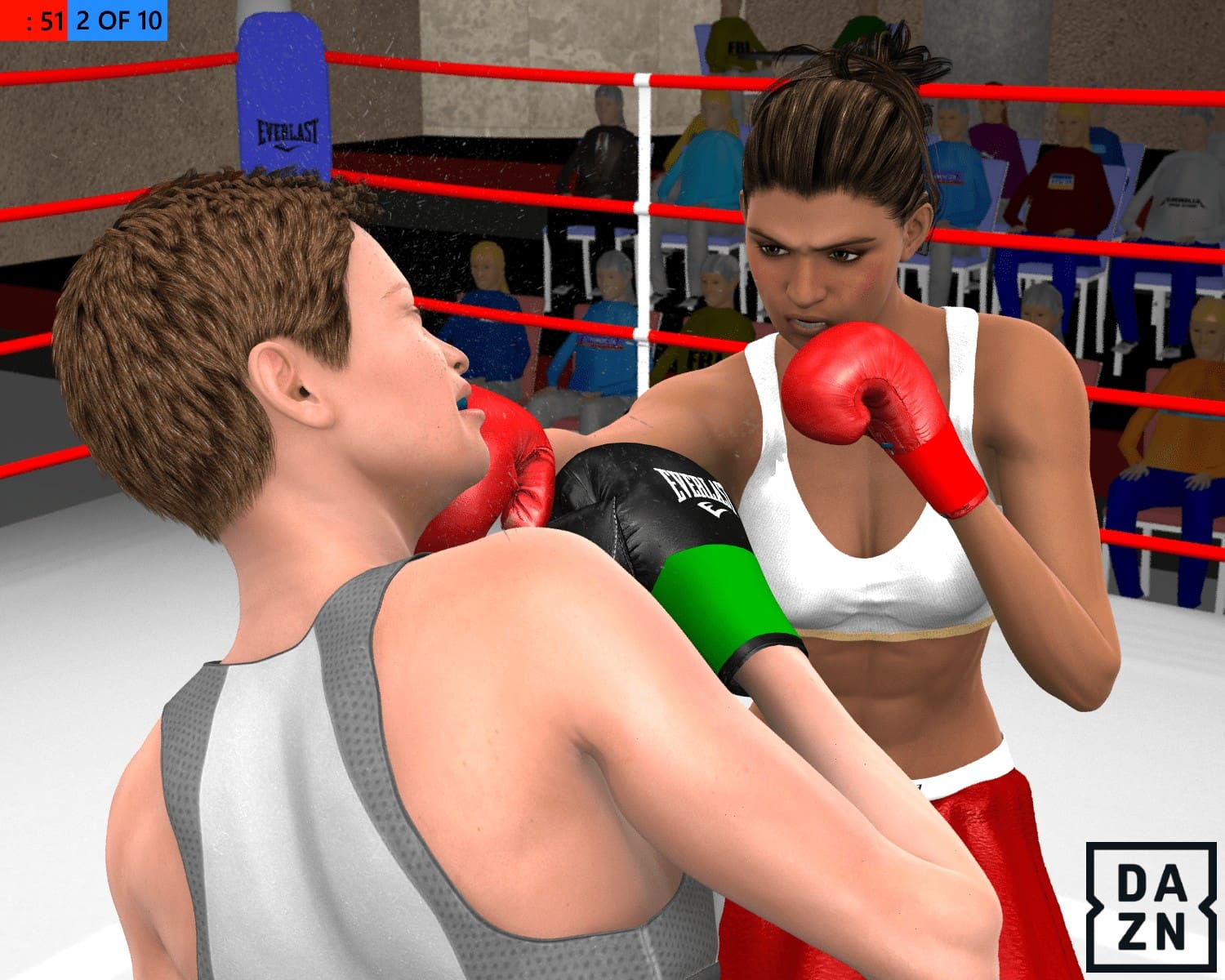 Steffi Slater seems a bit taken aback as Virani isn’t the same over aggressive Virani that seems to be willing to trade. This Virani patiently picks her spots to do damage. Highlighting this, Virani works the body with a long jab, scoring clean to Steffi’s midsection and retreating before the American can reply.

Virani thinks: I’m faster and you aren’t doing anything to slow me down, so I’ll just pick you apart piece by piece. 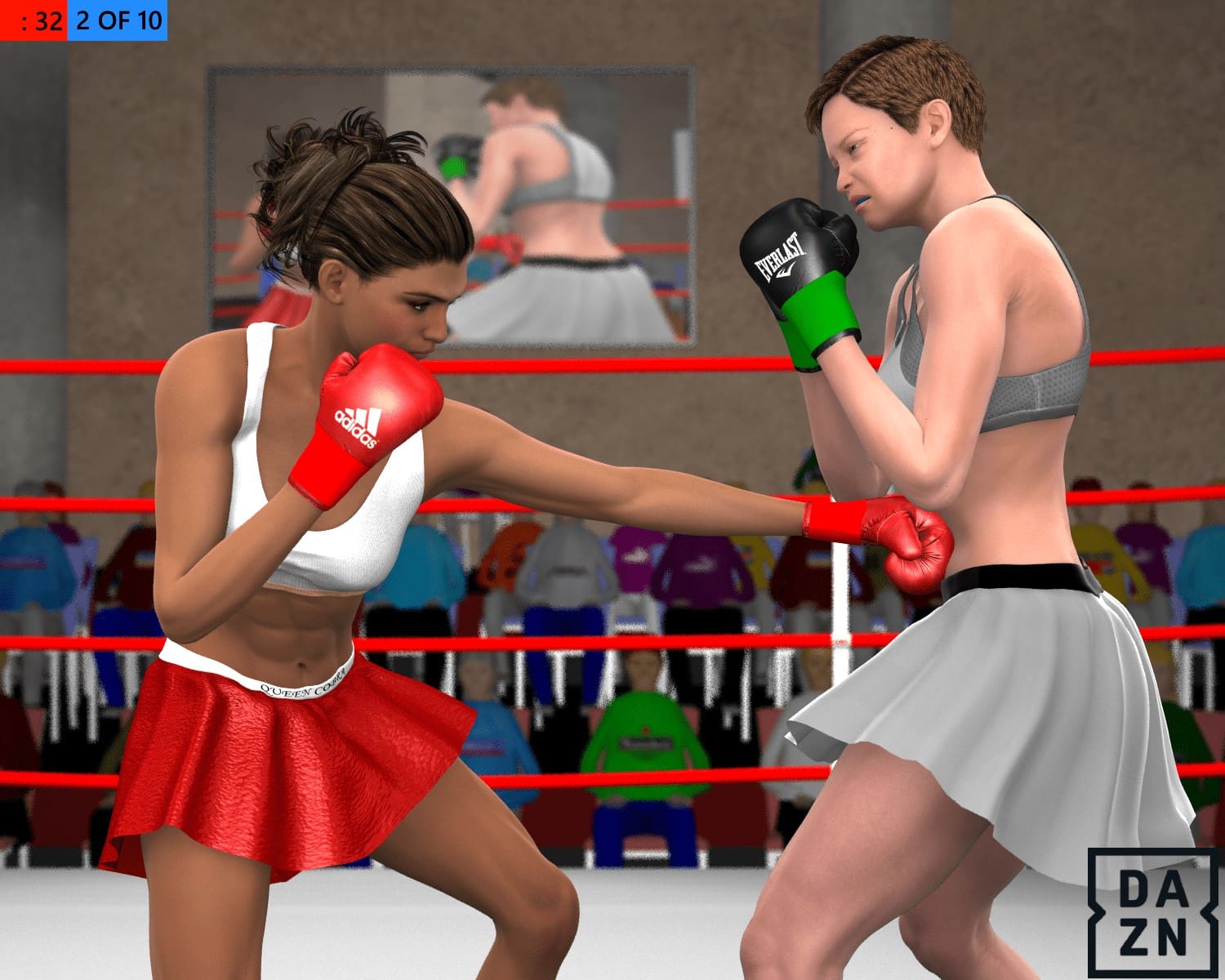 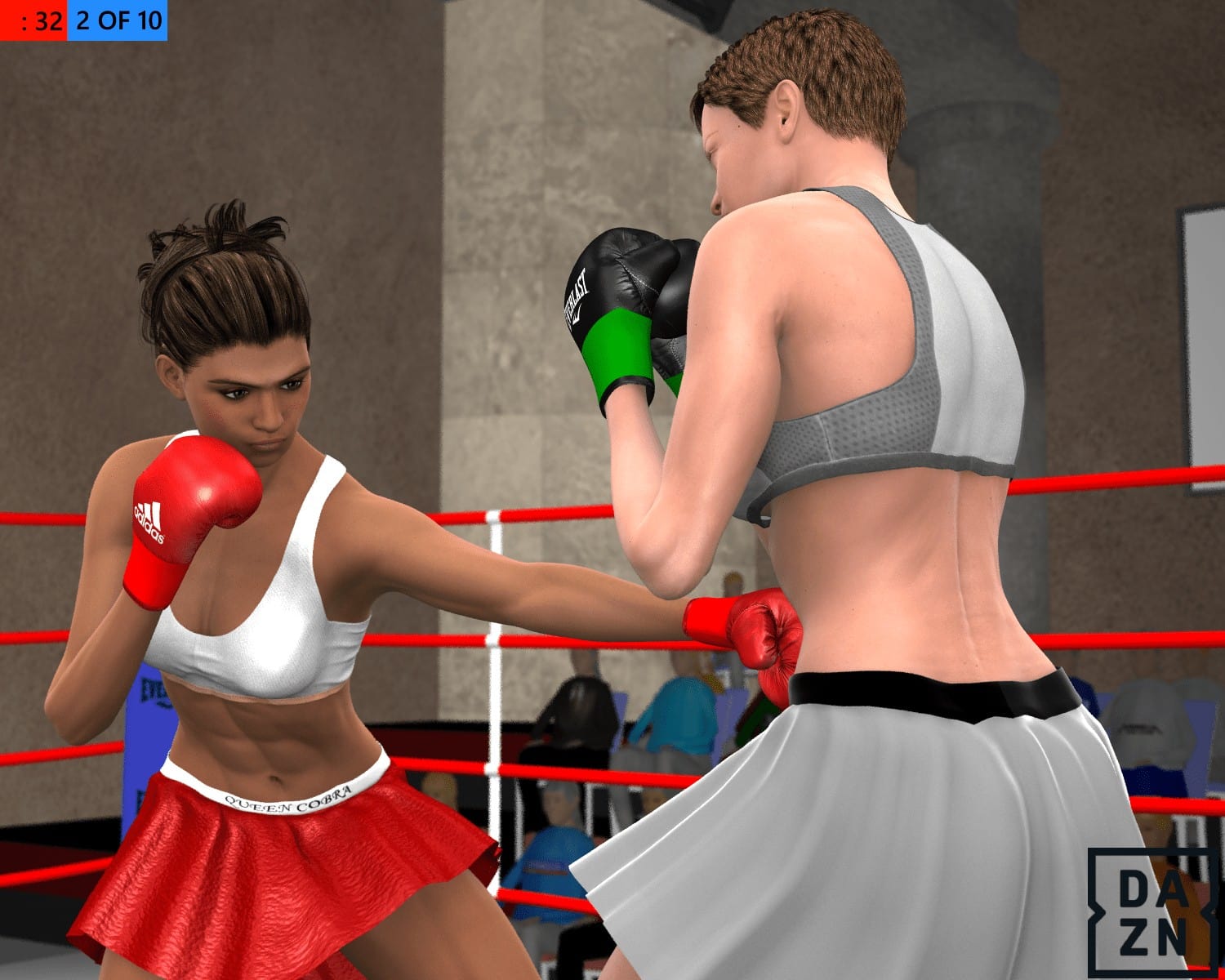 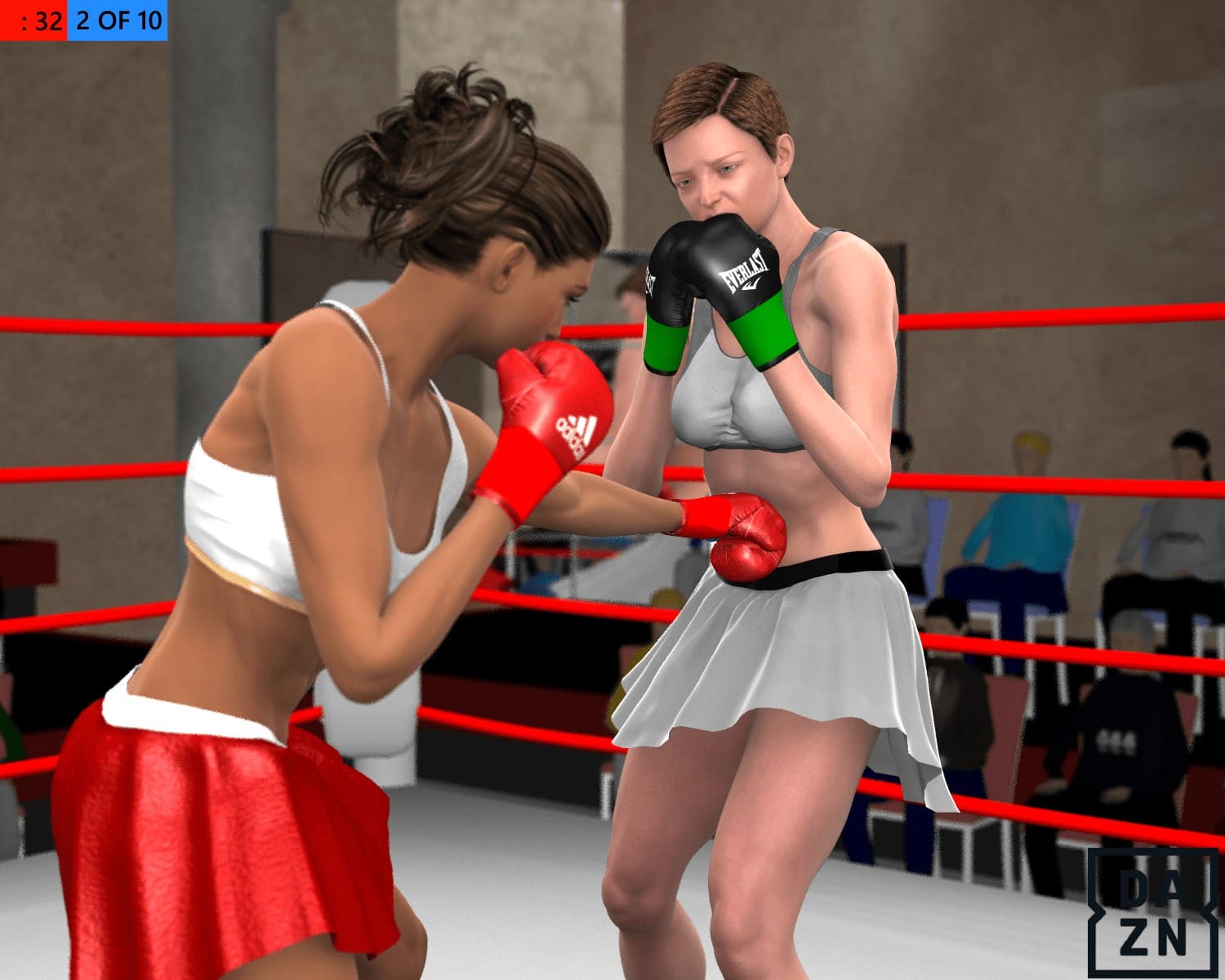 It’s been a Virani round so far in the 2nd, but she hasn’t done much in the way of damage.  Content that she’s ahead on the scorecards, Virani looks for a chance to put an exclamation point on the round.  She drops her gloves to invite Steffi to come forward.  Steffi knows that a late punch might not win the round, but it might just prevent Virani from thinking this fight will be a runaway.  Lured in by the low gloves, Steffi fires a few punches before throwing her intended punch, a right hook.

Virani reads the incoming punch perfectly and sees the incoming leather, and also knowing that it opens up the path for her left hand.  The Canadian Cobra pivots and throws her best known punch with the precision that has become second nature to her.

Stunned a bit by the well-timed blow, Steffi retreats, trying to figure out what just hit her.

Virani thinks: That’s why the call me the Cobra, girl.

Laila: “The Canadian Cobra shows off her signature punch and unlike showing your favourite doll to your friends at school, this one won’t conjure feelings of jealousy, only a feeling of numbness in your face.” 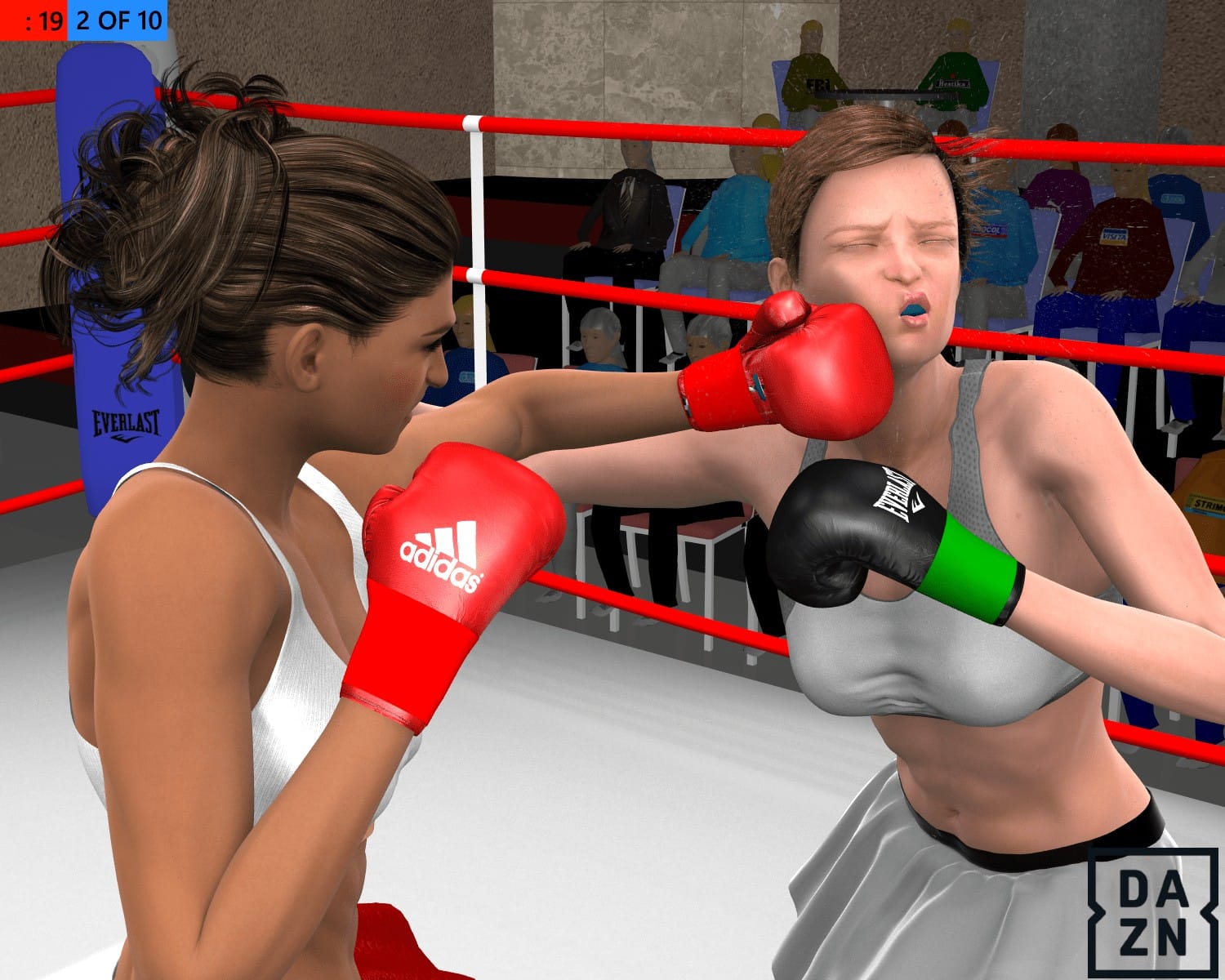 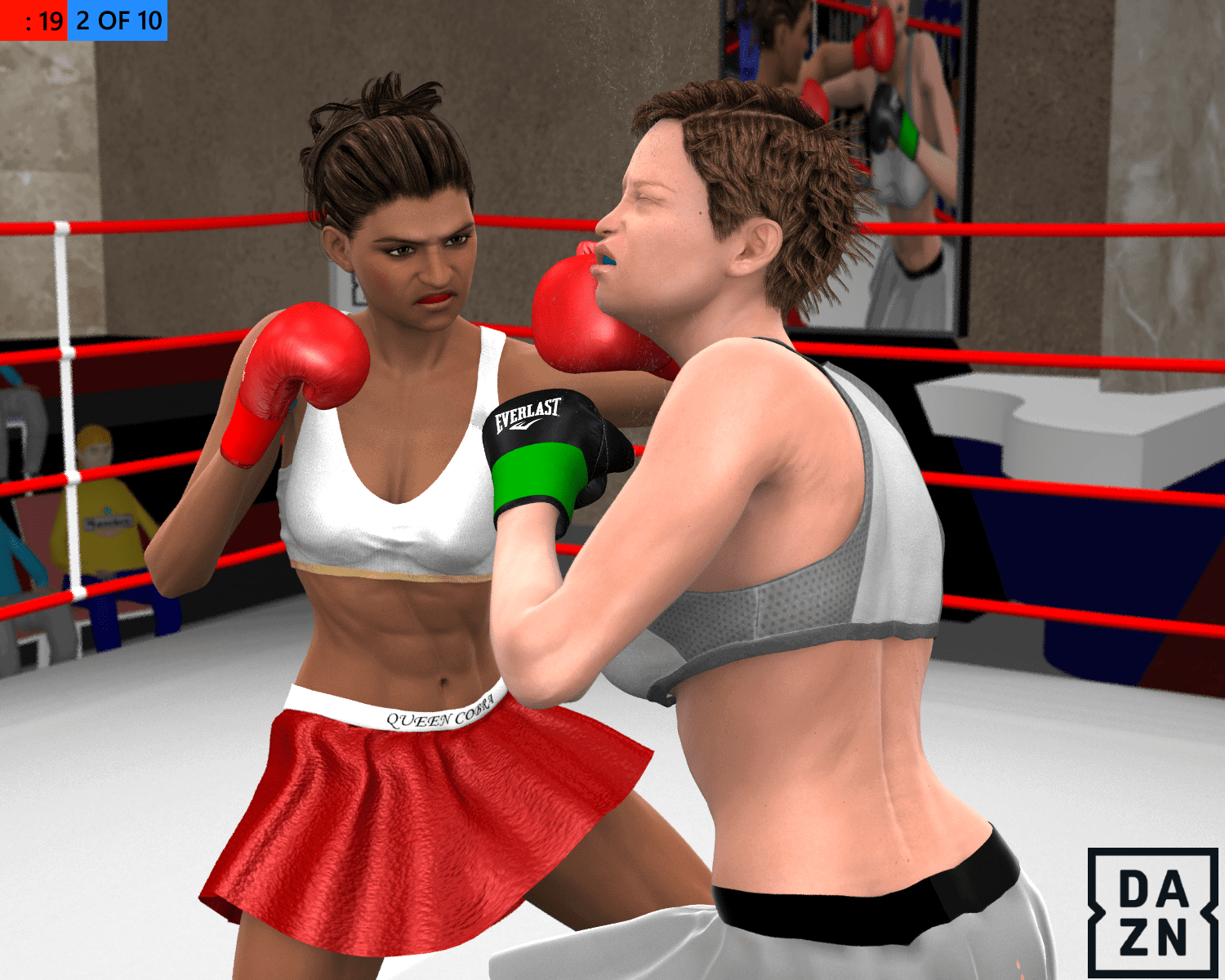 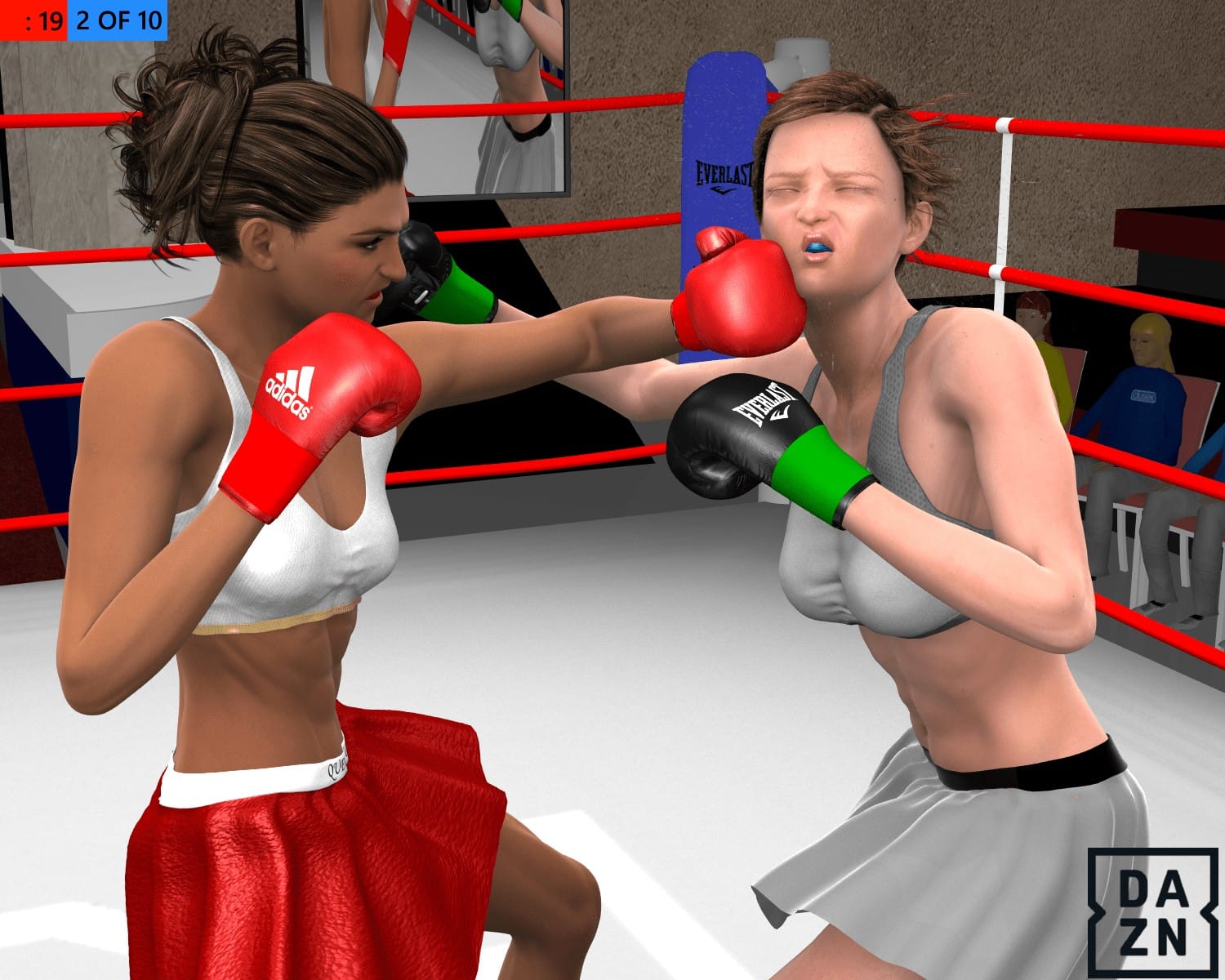 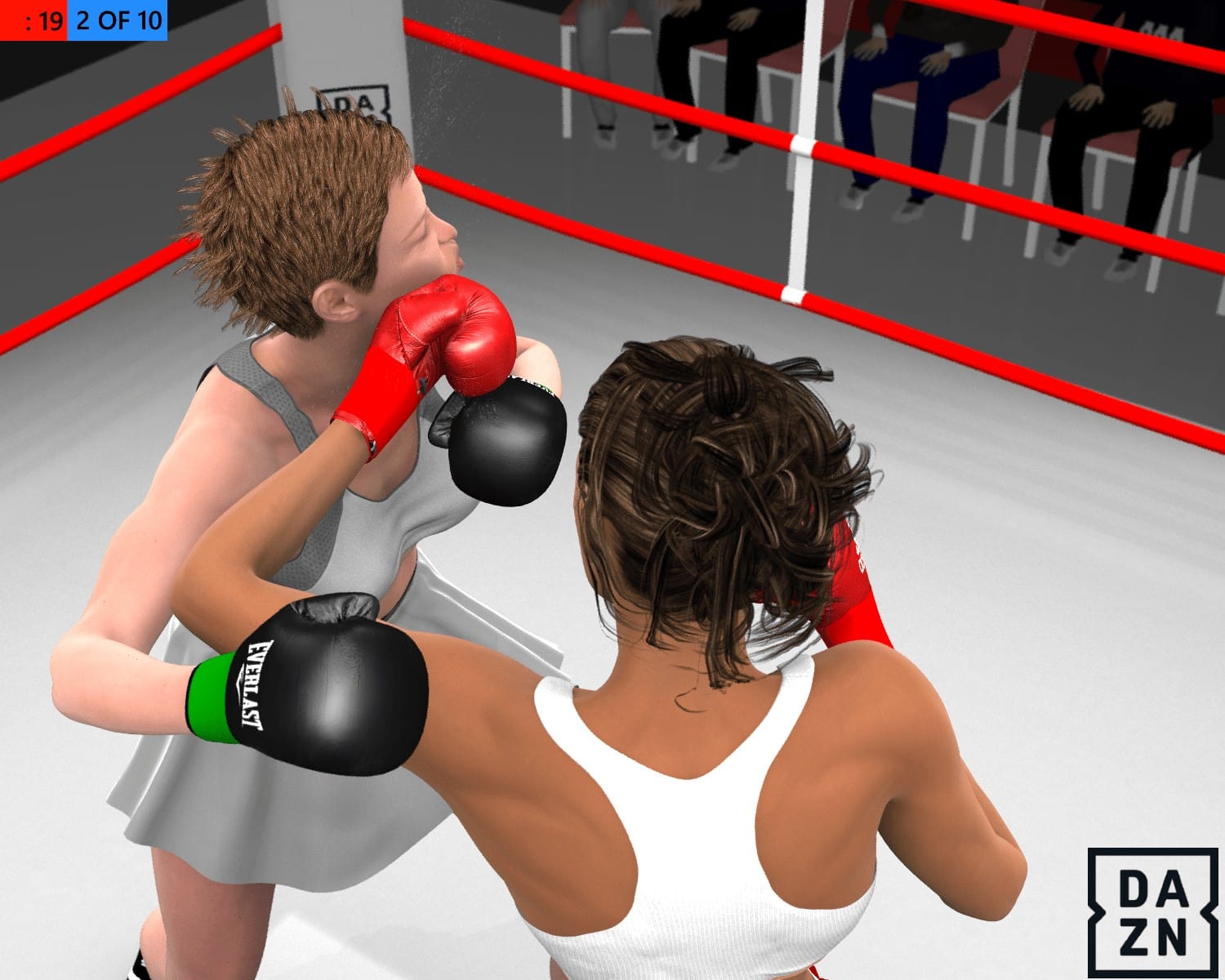 The Lady is Hurt

The Lady in Gray may be a solid veteran with a lot of tricks up her sleeve, but even she can’t conceal the fact that she really felt that left hook from Virani.  The Canadian Cobra is a bit more wary chasing after Steffi given what happened in the last round, but her instincts tell her that she has her opponent hurt and wants to pour on the damage when given the chance.

Virani carefully guides Steffi towards the ropes with a strong jab and good footwork, waiting to line up her shot.  With Steffi keeping up a varied guard and playing for time before the round ends, the Canadian picks her spot well.  She uses her jab to get Steffi to straighten up in the ropes, before throwing her full body into a right hand that splits Steffi’s guard and twists Steffi’s head around brutaly.

Laila: “MacVicar scores again with a big shot that she put all her weight into.  That’s 126 pounds of toned fury for those keeping score at home.  Referee Kanti Agrawal is watching this one carefully, though she doesn’t seem too intent on stopping the fight, only being in the right place if she needs to be.”

Virani thinks: That won’t be enough to stop you, but that one is going to be hard to shake off. 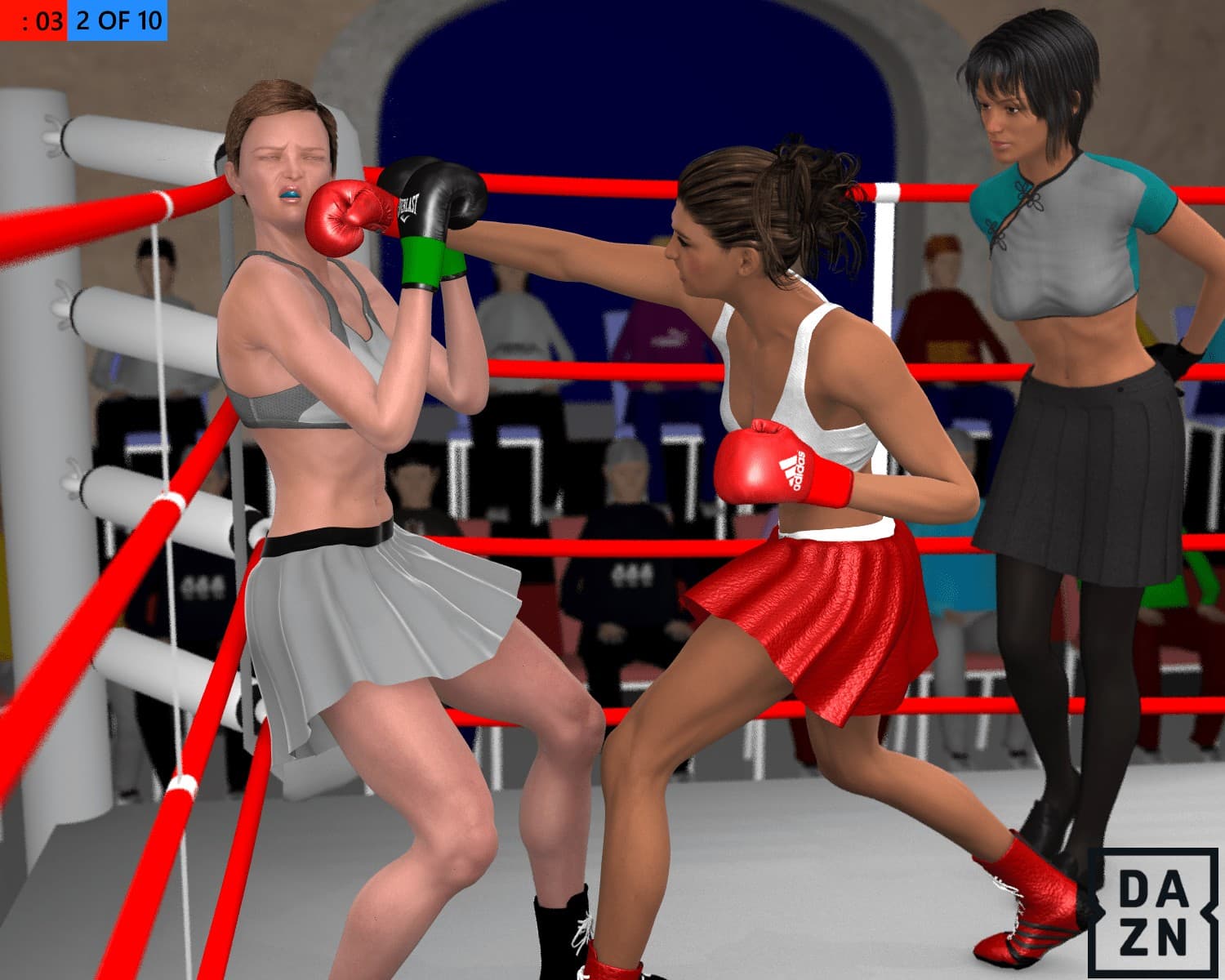 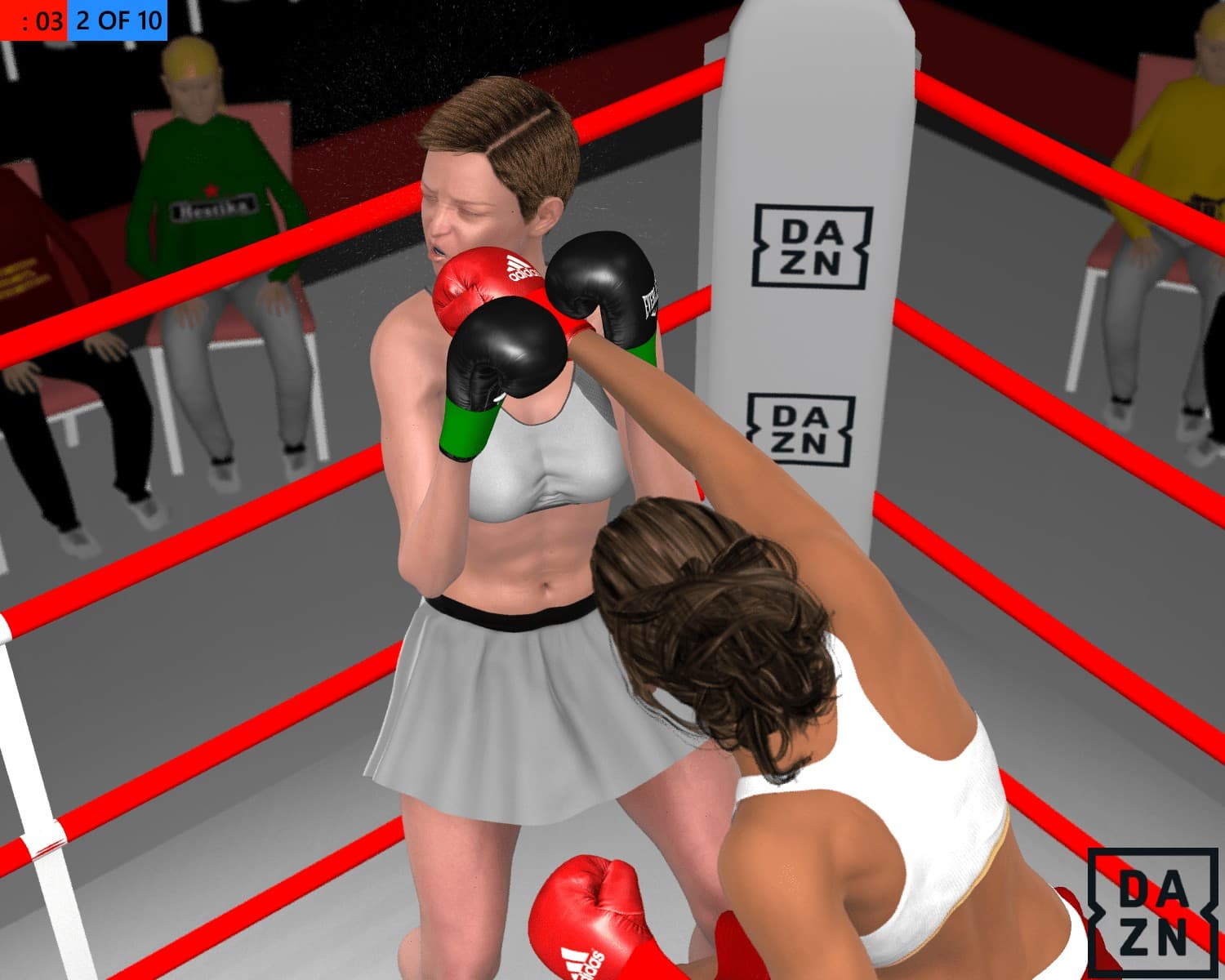 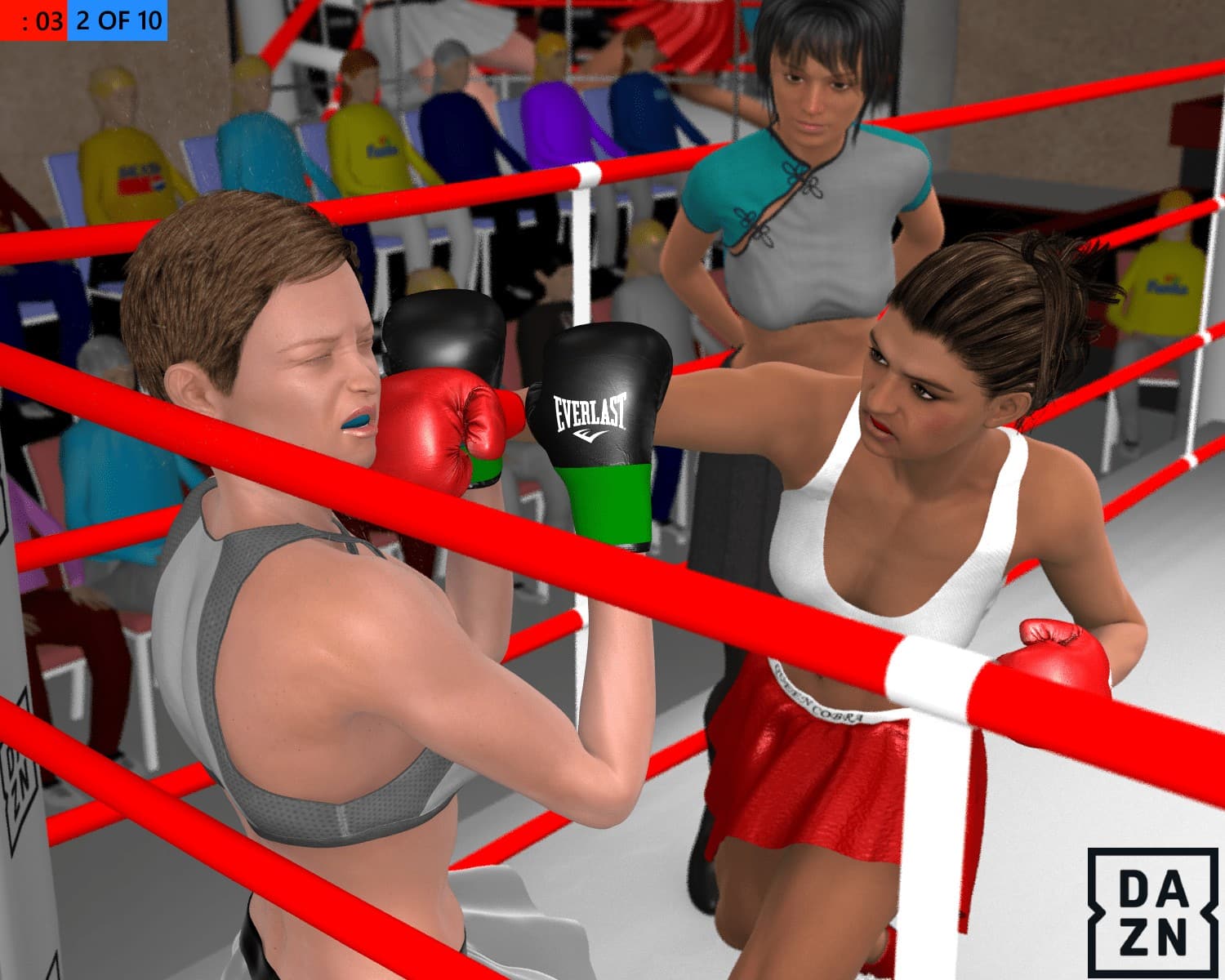 The Canadian knows she has her opponent hurt, but Steffi is too tough, too.  The veteran bobs and weaves, preventing further punches landing, before escaping her predicament as the bell rings.

Virani returns to her corner after having put together two very strong rounds and seemingly displaying the ability to hurt the veteran Steffi when she lands her best shots.

Thomas: “Okay, that was another good round, Virani.  Keep using your speed and keep fighting at a distance.”

Virani: “Steffi’s freaking strong though.  Old woman strength.  I wish Kanti would god damn do her job and stop some of the shit she gets away with.”

Thomas: “You know Kanti.  Anything short of her repeating and egregiously fouling you, don’t expect anything other than a warning.”

Thomas: “I’d say we should take a round off here.  Let’s see what Steffi brings to the table.  Only take what she gives you.  I think she wants to take you into the later rounds here.”

Virani: “I’m not sure Steffi will last that long.” 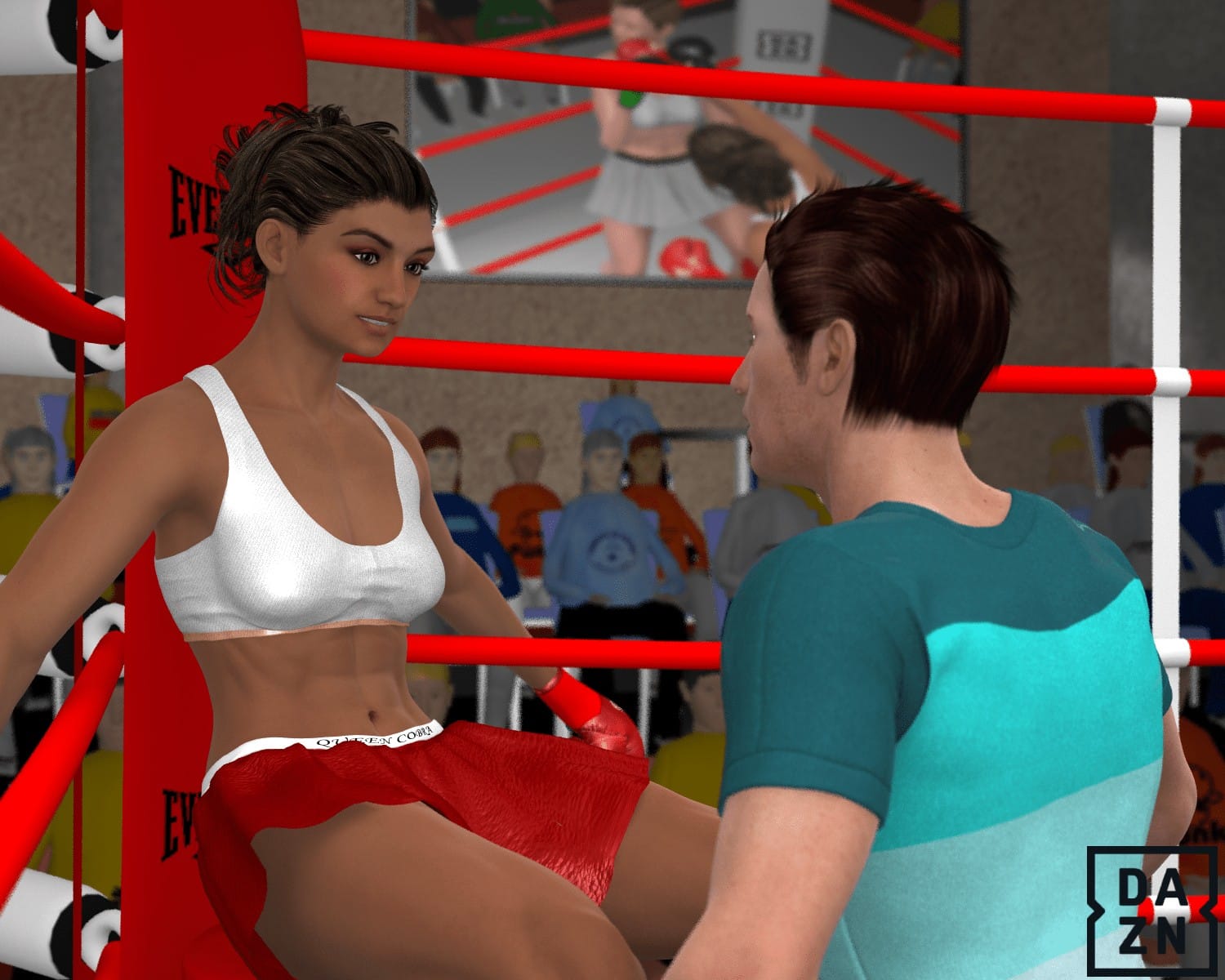 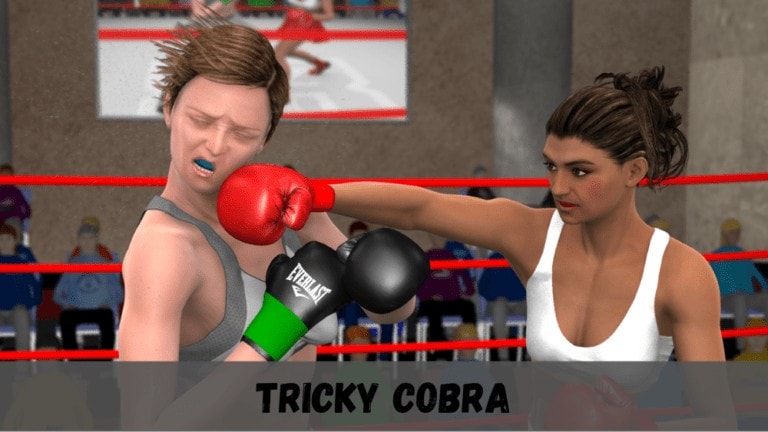 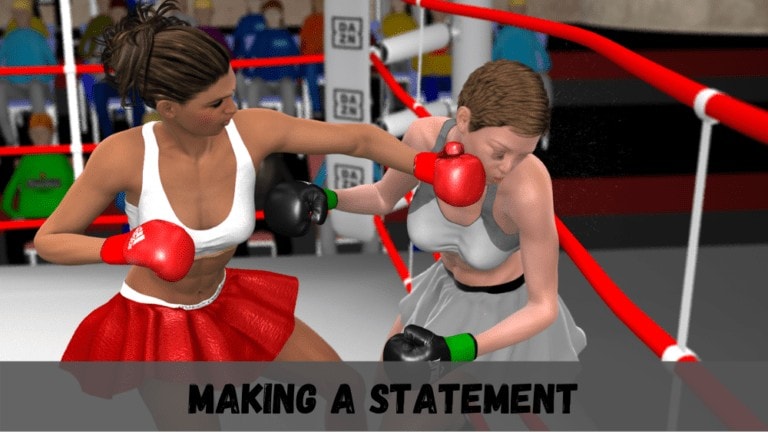