It’s Saturday night at the Casino de Montréal, Canada. More precisely in la Belle Province called Québec, the one where people speak French. Chloé Potvin is in the ring in a Super Lightweight contest.

What happened to Chloé after her win against Sky Houghton in May 2019? She started eyeing another fight, but she picked up an elbow injury while skateboarding. What derailed her plans also brought business complications. The local promoter tried to tear up her deal under the allegation that practicing another sport than boxing is a breach of contract.

Ever the feisty one, Chloé took the guy to court and won. He still owes her two fights with full purses until the Oiseau de malheur is free as a bird.

Injury recovery took some time, but Chloé was able to get back in the gym in March. Hard training and sparring sessions helped her regain her shape. She had to choose between a tune-up or a proven name for her return to competition. She went for the middle road in Stella Haussmann, a big puncher who has her limits.

Stella took a few months off after getting destroyed by Alesia Schumann in September 2019. Then, she had a couple of tune-ups to regain her confidence. That ended with a brutal knockout win in both cases. Traveling to Montréal to take on Chloé Potvin means stepping up again.

Chloé goes into this fight with a 20 wins, 5 losses and 2 draws record. Stella’s record stands at 7-1.

How does it go? Let’s find out at ringside.

The Québécoise wants to take the first round to feel things out. Jabs, basic moves and tentative combinations to assess the opposition. The German is in no mood to play around, though, because she has a reputation to restore. She goes straight in with power shots. Solitary Confinement doesn’t believe in clemency, from the courtroom to jail to the boxing ring.

That opening round is a painful one for Chloé, who is surprised by the aggressiveness and the power of the visitor. 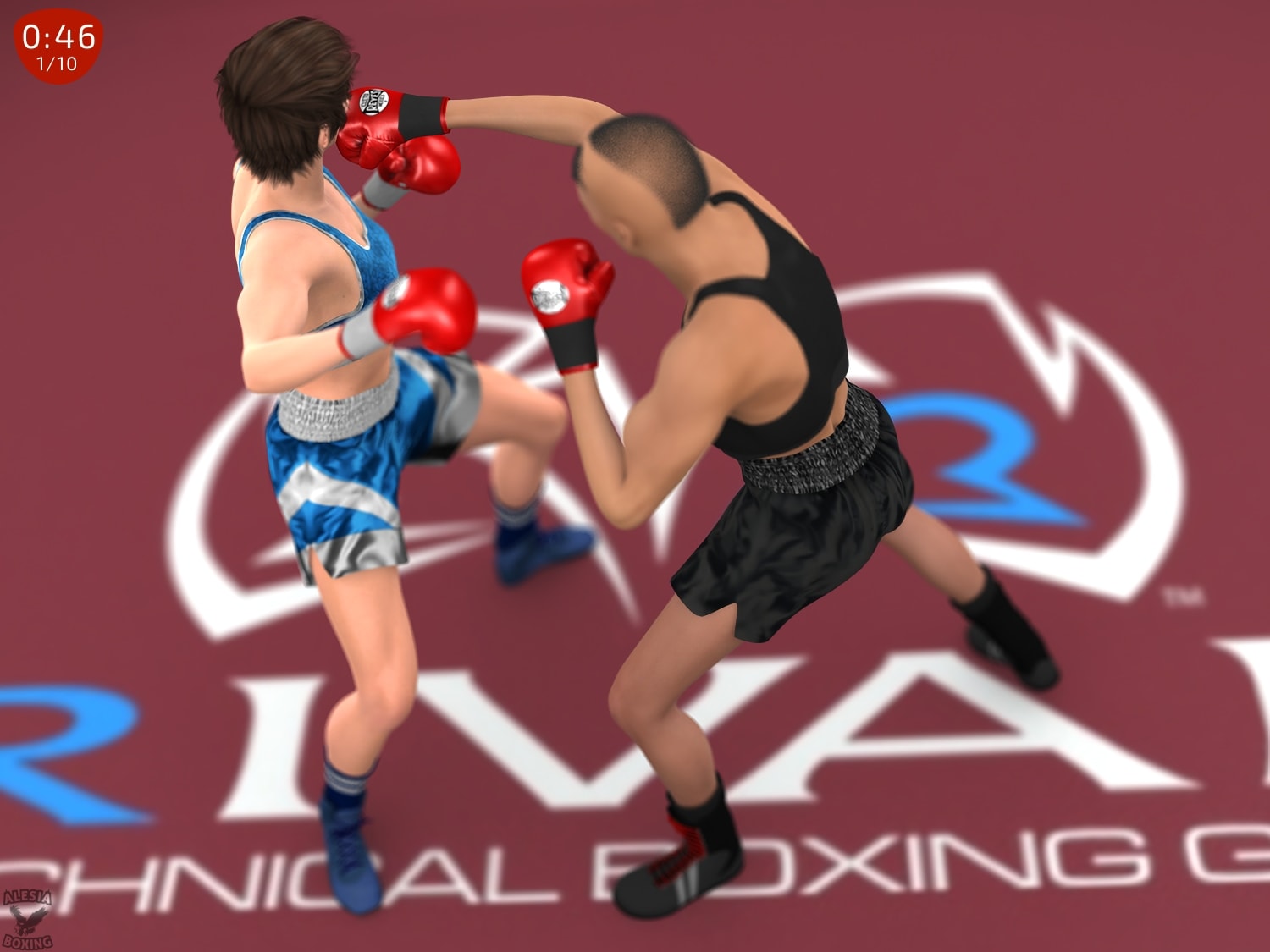 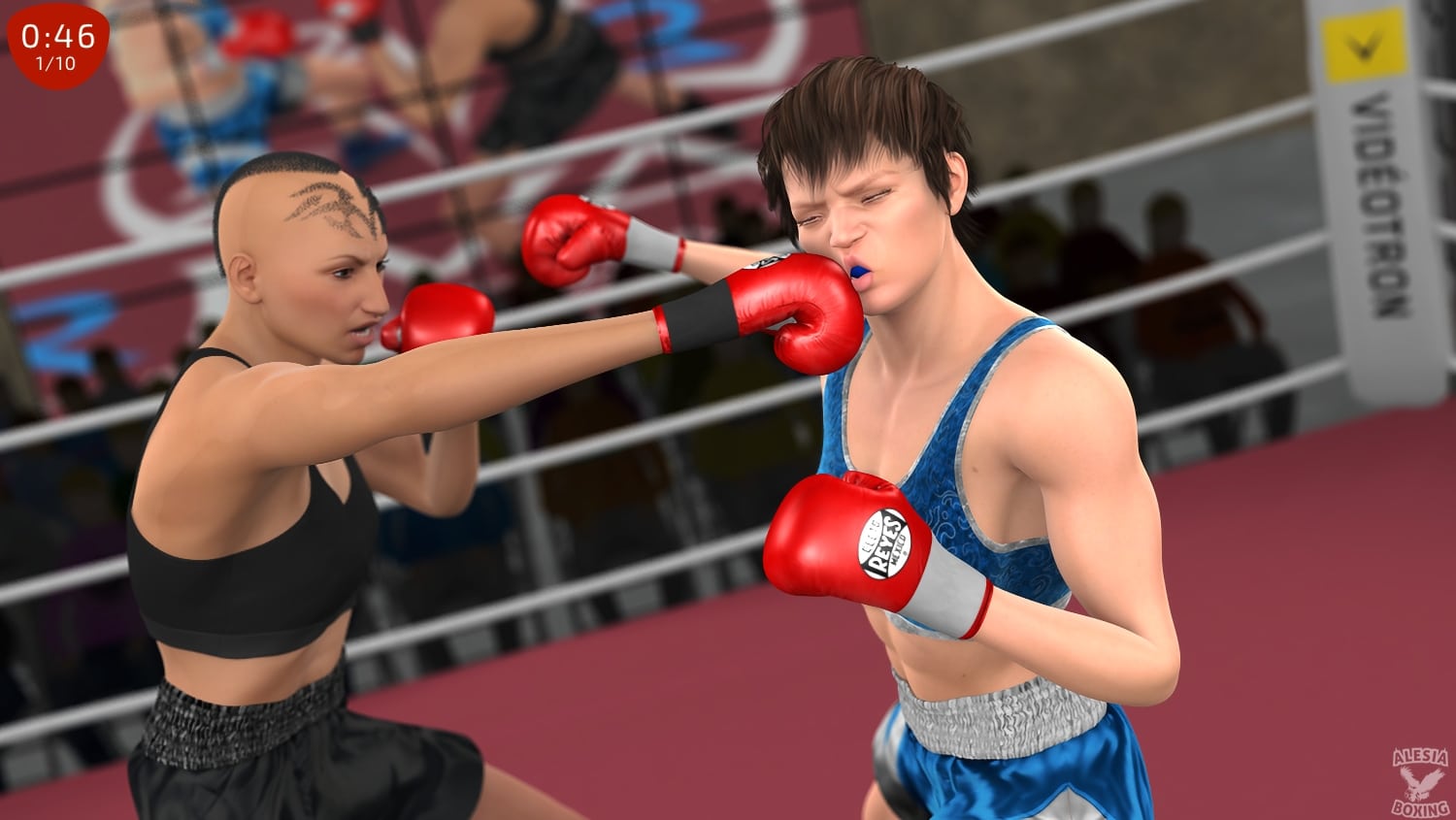 At the urging of her coach, Chloé opens fire in the second round, which is more even. The two boxers have their moments and it’s not clear who wins it. Possibly a 10-10 on the judges’ scorecards, unless they have a little bias for the woman in blue.

Chloé truly finds her rhythm in the third engagement. Although an aggressive slugger, she plays a game of patience on the counter to make Stella walk into big shots. The best one she lands is her signature punch, the right uppercut. Not unlike a certain Alesia Schumann, she is comfortable with a powerful release under pressure. A clinical, painful punch that makes your head turn and spin at the same time.

Clearly a Chloé round. 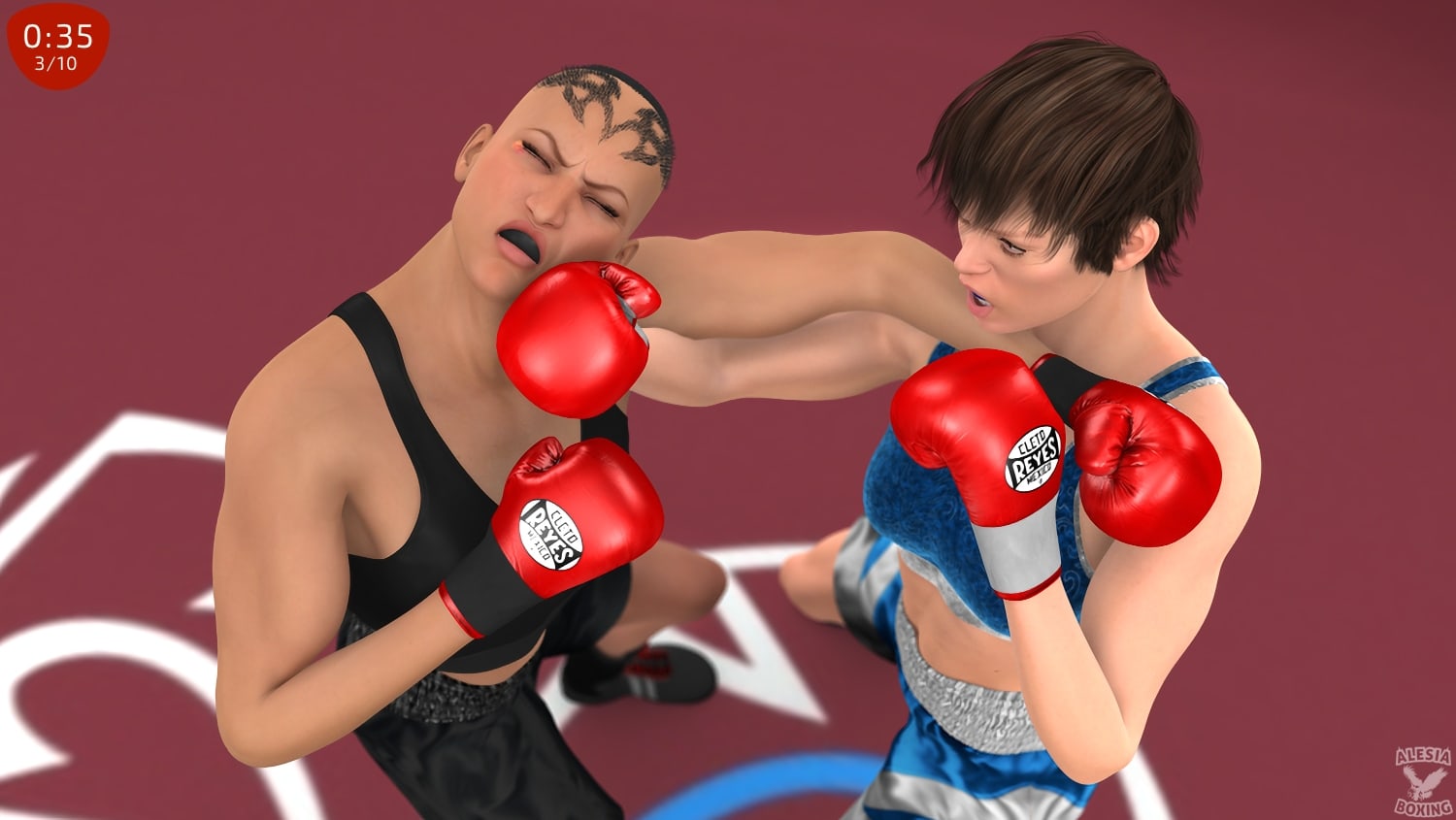 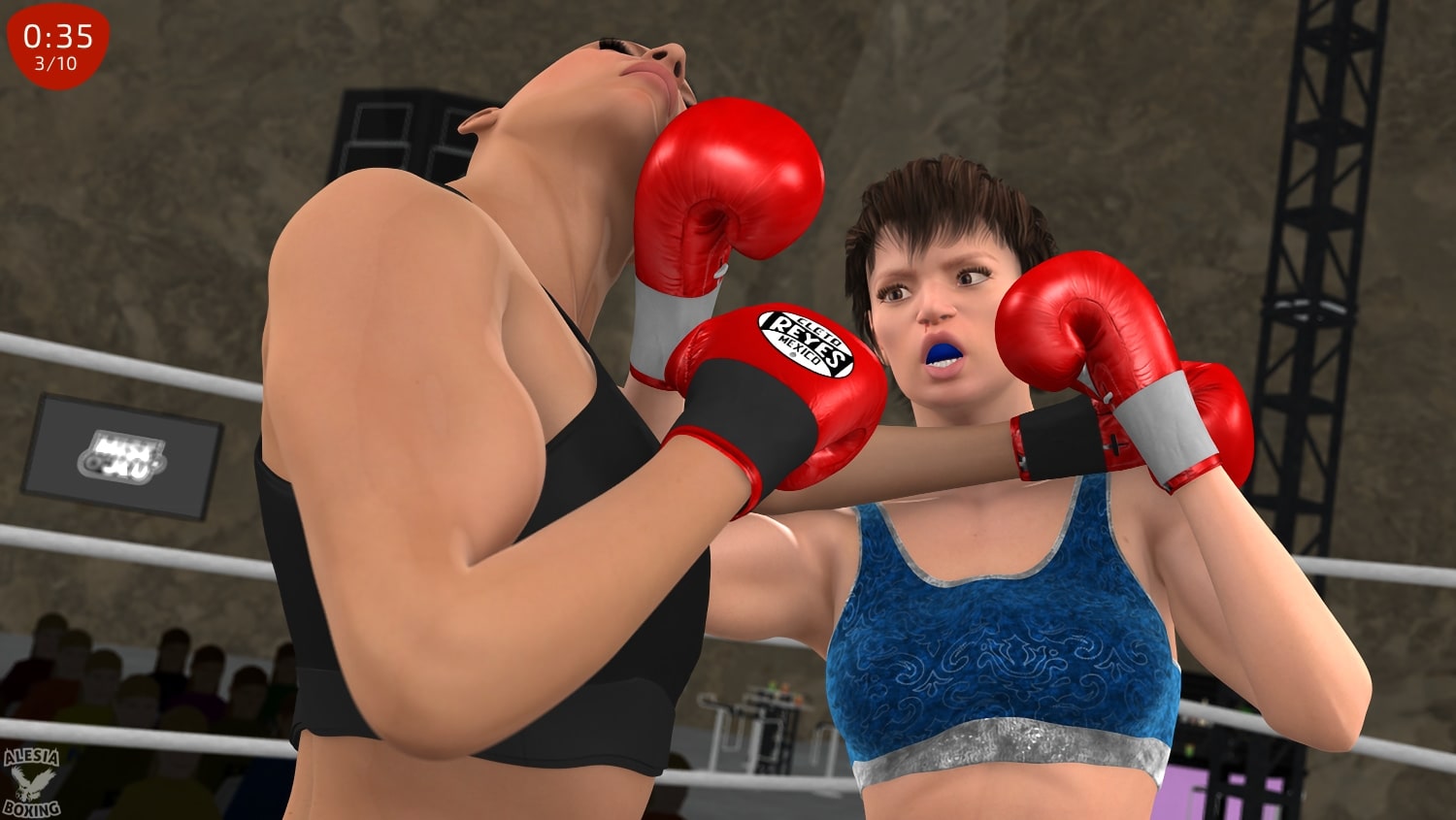 Oiseau de malheur carries the next two rounds with selective peppering of Stella. She alternates between attacking and counterattacking with the accuracy and balance you can expect from a seasoned veteran. Although her brute force would make a toughman contest easy to win against Chloé, Stella cannot rival the glossy polish of the more experienced Québécois puncher in front of her.

We have more of the same in Round 6, which Chloé dominates with ease.

Stella’s legs wobble a bit as she takes power shots. Desperate to make a dent, she swings for the fences with a left hook and gets caught at the worst possible time. Chloé comes in with a howitzer of a right cross. The blow is so supercharged that it knocks her off her feet just like a Chelsea Carter tackle could. 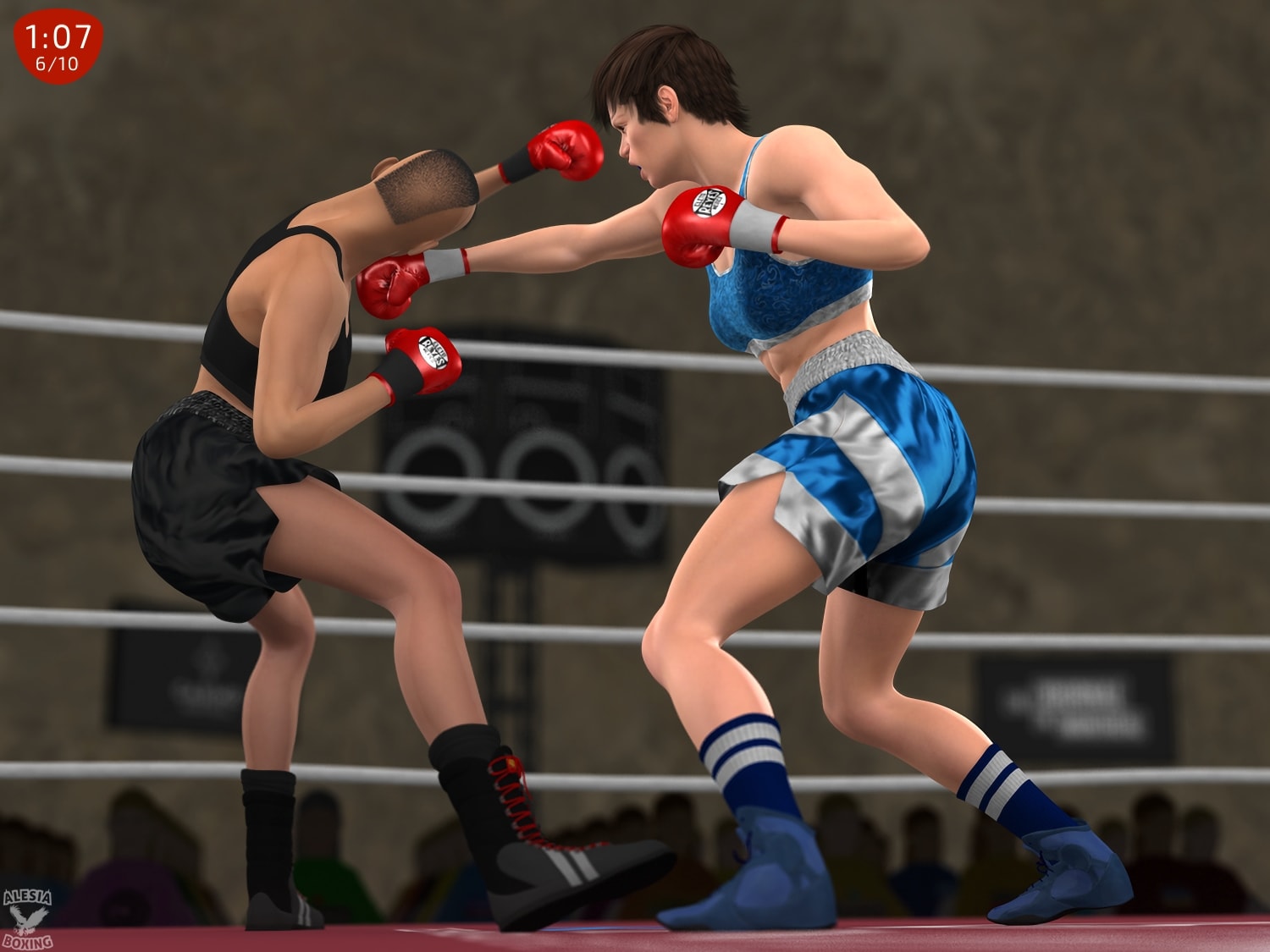 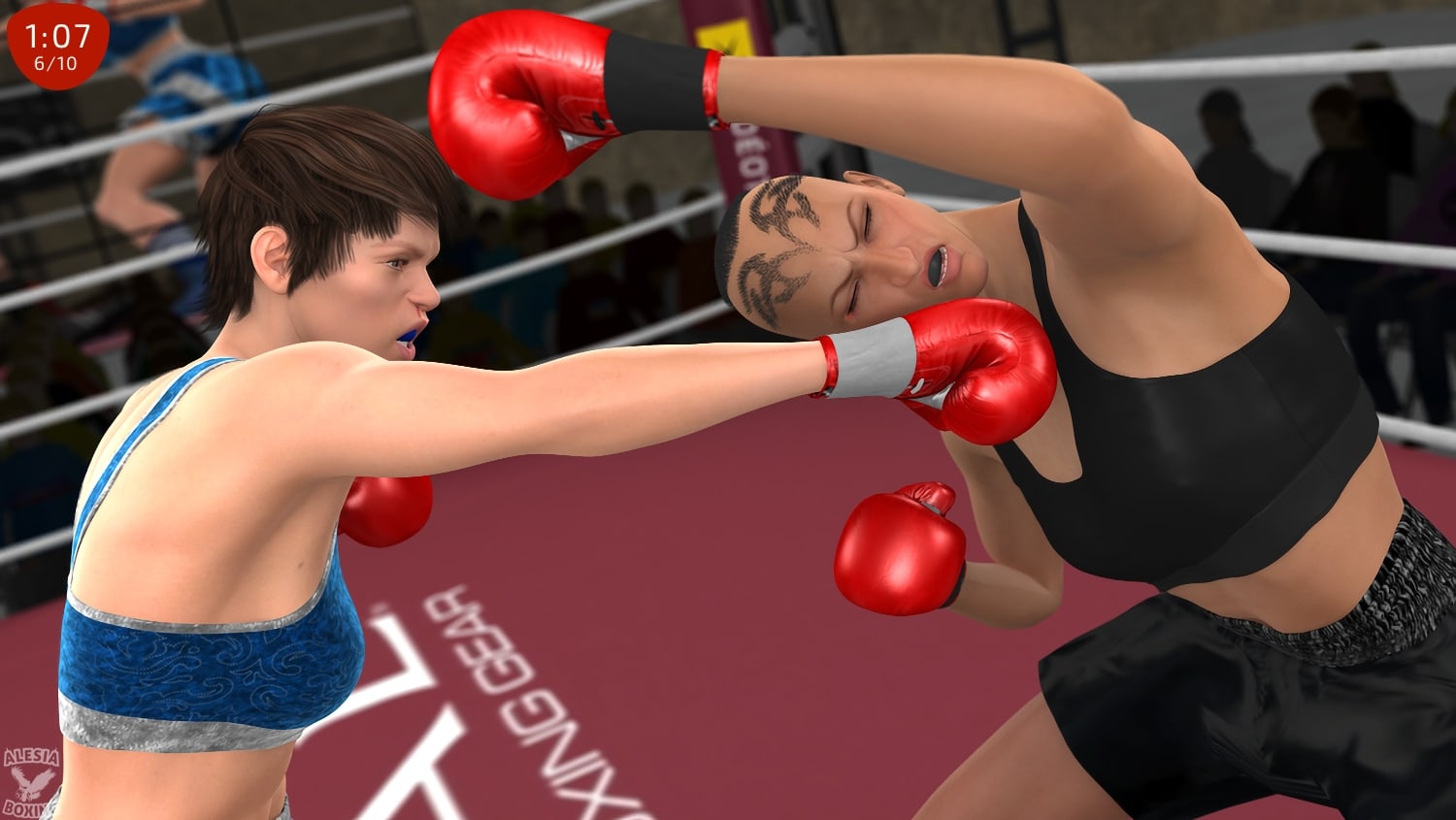 Stella’s fall is so convincing that referee Chantal Gagné steps in, waves Chloé away and declares the knockout within a single second, even before the visitor is done falling.

Chloé immediately turns to her corner and runs to her coach for a hug. 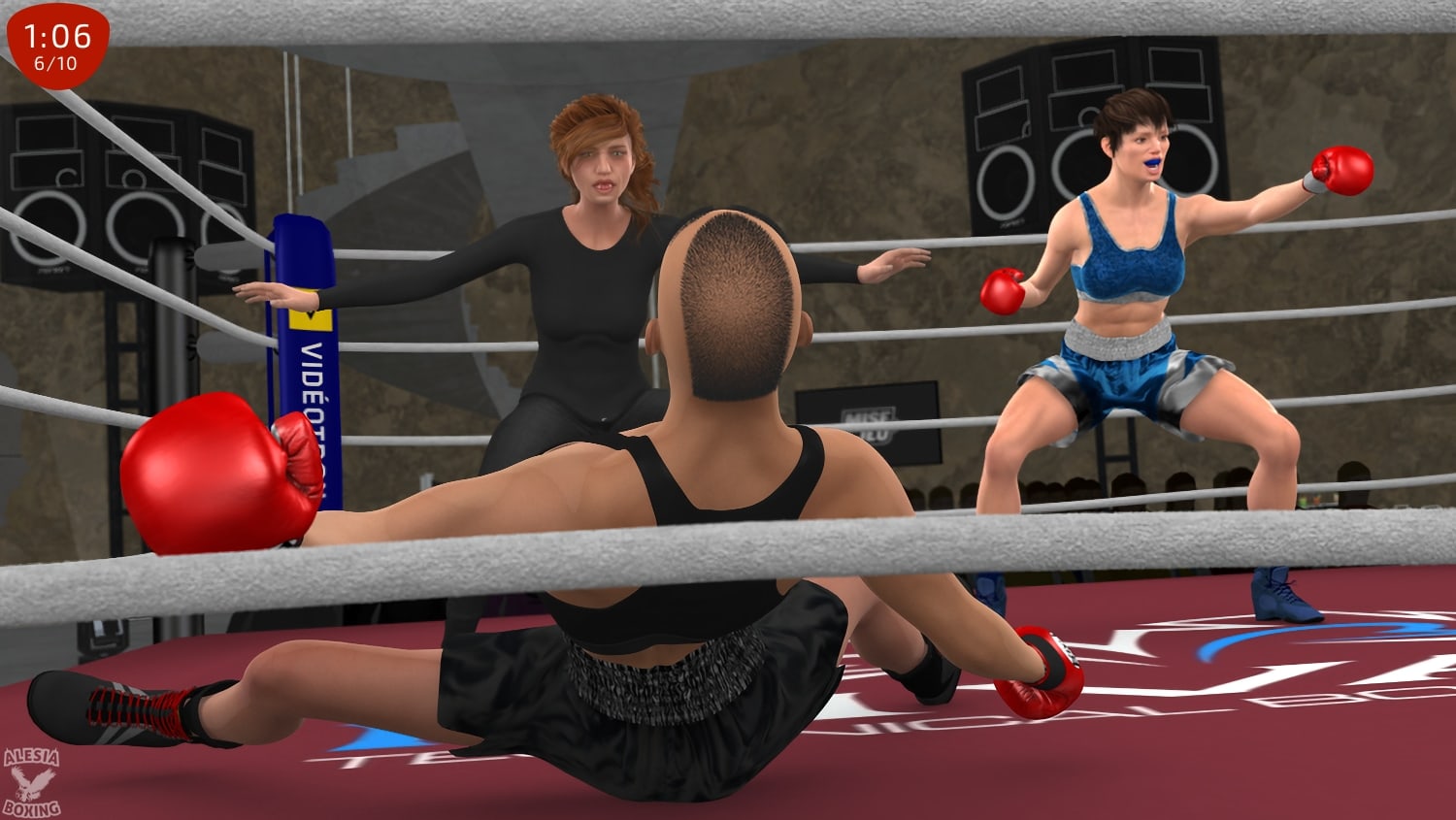 The official particulars confirm that the home fighter scored a knockout at 1:06 in Round 6. Her record now stands at 21 wins (18 KO), 5 losses and 2 draws. It was a blast of a return to the ring after more than a year away.

Ranked fourth in the latest BOX! Magazine rankings, the winner believes she can reach the greatest heights again as she fields questions.

Chloé: “I think that this win is a statement. I defeated Stella Haussmann convincingly. Almost as convincingly as Alesia Schumann did a year ago, and I’m sure that the world champion will see this fight. I don’t know what she’ll think when she sees this, but I’d like her to consider me for a title shot. I’ve earned my stripes and nobody ever gave me that shot. Maybe next year?”

Regina: “Good return to the ring. Definitely an option for us.”

Alesia: “I like Chloé. Hard-working fighter and it’s true that nobody gave her a shot. Not that I owe her anything but she’d be a good challenge.” 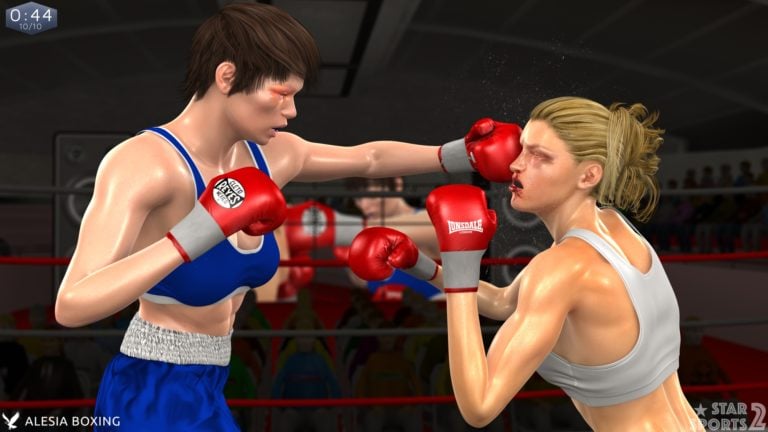 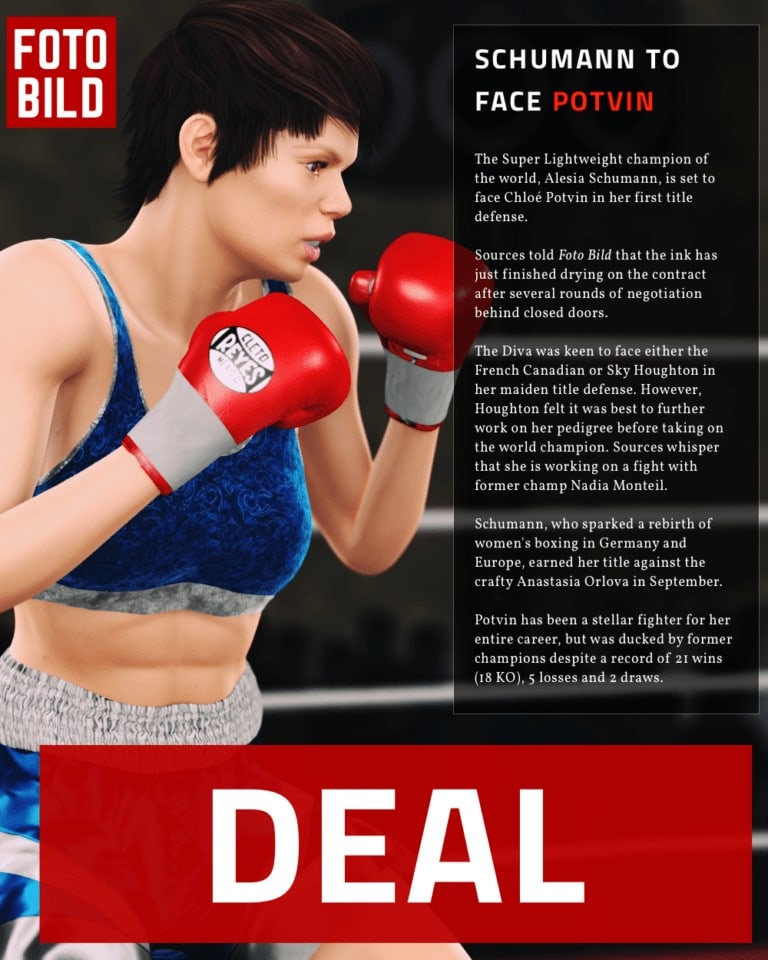 A Québec City fighter who follows the footsteps of many celebrated local boxers. A tough customer and contender in the Super Lightweight division.
Profile
basic HTML to style comments