Brooklyn – “Peppermint” Taylor Grant is about to dance under the lights at the Barclays Center. What has the talented boxer been up to since her defeat at the hands of Alesia Schumann?

In a difficult stocktaking meeting, she fired Nina Hines for her absence of adaptability and criticism. Nina’s unwillingness to share the blame for failure was the last straw.

Weeks later, Taylor packed her bags to move from New Orleans to the Bronx, in New York. She sought a new, challenging environment instead of home comfort, and fell in love with the gritty charm of New York as quickly as you can snap fingers.

Joining the Stitches boxing club, training under the supervision of head coach Sam Romero, brought adversity. The decorated amateur fighter couldn’t turn pro due to multiple Achilles tendon ruptures. The young and ambitious coach has a big mouth and a fantastic ability to put people back in their place.

In the very first sparring session, Taylor boxed the only way she knows: lightning-fast punches and delicious technique to hurt mostly upstairs. She gave her partner a five-round pounding, but the coach asked her to stay and hit the bag until everyone else left.

Peppermint got a talking-to in the empty gym.

Taylor: “Are you calling me stupid?”

Sam: “I’m saying that you fight stupid. I’ve looked you up. You’re a fucking headhunter who tries to knock everybody out. That’s why Alesia Schumann beat you on her way to her world title.” 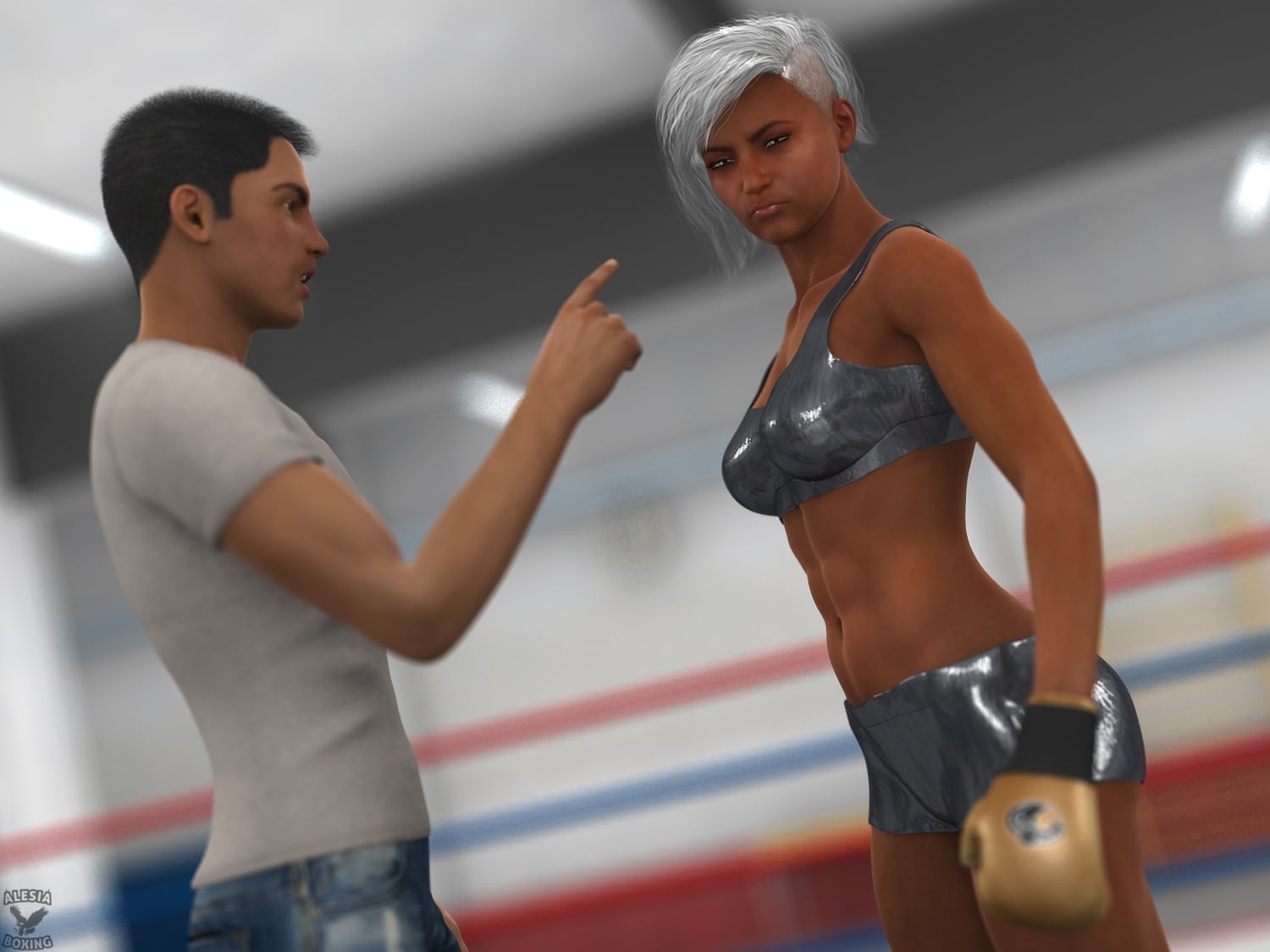 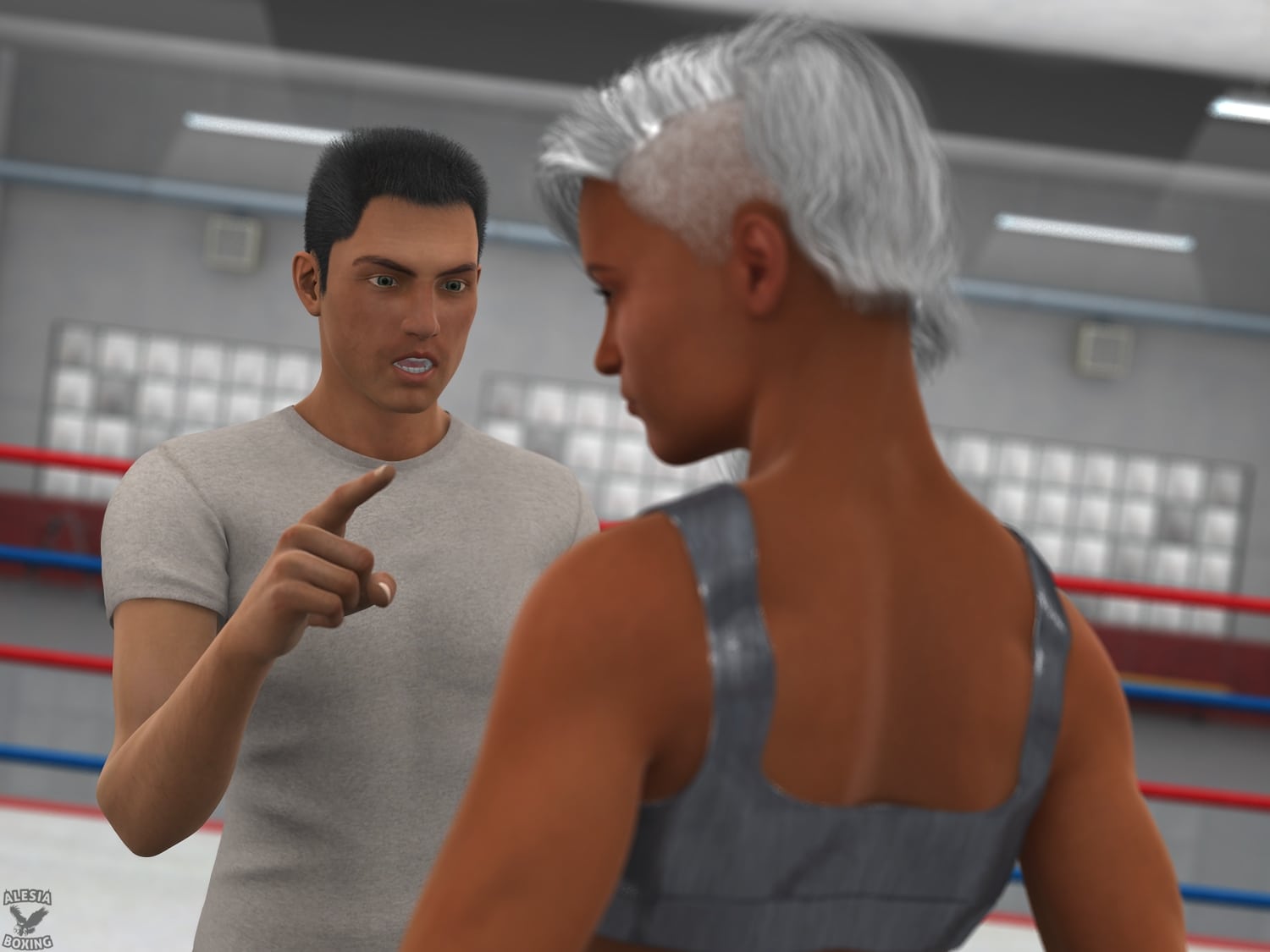 Sam: “Quiet! That shit won’t fly in my gym. You’ll a be Top 5 but never champion because there’s always someone smarter than the best punchers. If you refuse to change, leave.”

Taylor turns her back on him and says: “I’ll find another coach.”

Taylor froze on the spot.

Sam: “You’ll always find someone who’ll let you be the boss, and take the money to watch you fall short. If you work with me, the truth will be in your face. Do you wanna be world champion?”

Sam: “Then, listen and change. You’ve got the talent and the body. It’s not that hard for you to be smarter, and definitely not negotiable if you wanna train here.”

She took a week off to think about it, and did go back to work on becoming a more complete fighter.

Today, Taylor faces Catarina Espiga on the undercard at the Barclays Center. Her mission is to box patiently, even if the opportunity for a knockout doesn’t show up. For her part, Espiga couldn’t say no to a juicy payday.

This fight starts wholly differently than past ones. Instead of gunning for decapitation, Taylor looks to maintain the correct distance to deal with the puncher. Lovely technique and movement with flying green gloves to score points.

The most important change in the black girl’s game is more frequent use of an accurate jab. She makes sure to deny the puncher major “scoring chances” by keeping the shoulders tight even when she throws. Her stance is flexible to “sit” when needed and to avoid being overly static. It’s dynamic. 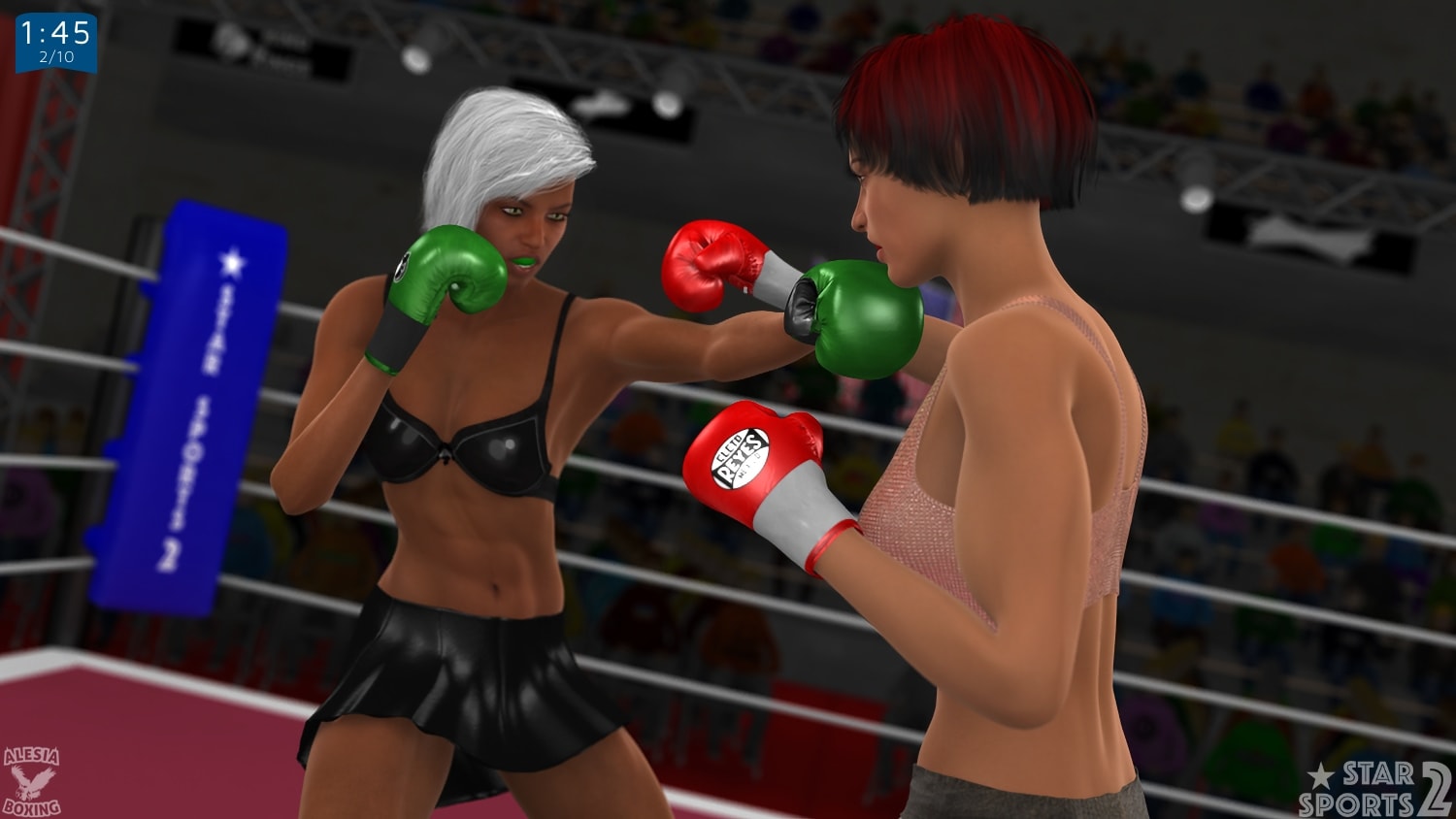 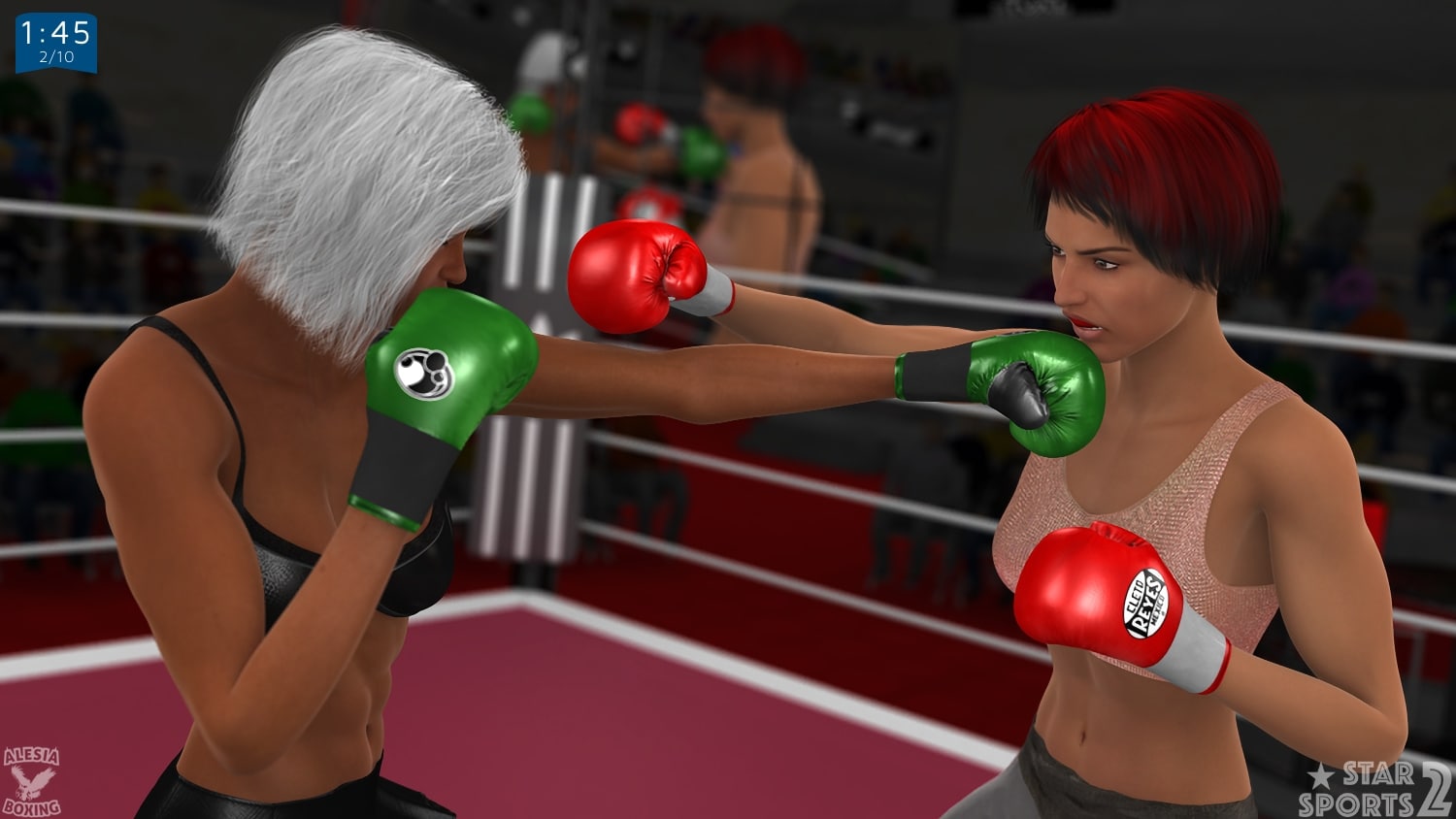 Taylor wins the first three rounds rather easily. That makes Catarina increase the pace in Round 4 to avoid falling behind too much. The former number one Super Lightweight reacts by twisting her legs and upper body to change the angles and – gasp – even turn to defense to do the hard work.

More than a minute in, she sees a straight right coming and ducks under it. She lowers her right hand and smiles mischievously before shoveling a solid shot in the Mexican’s solar plexus. 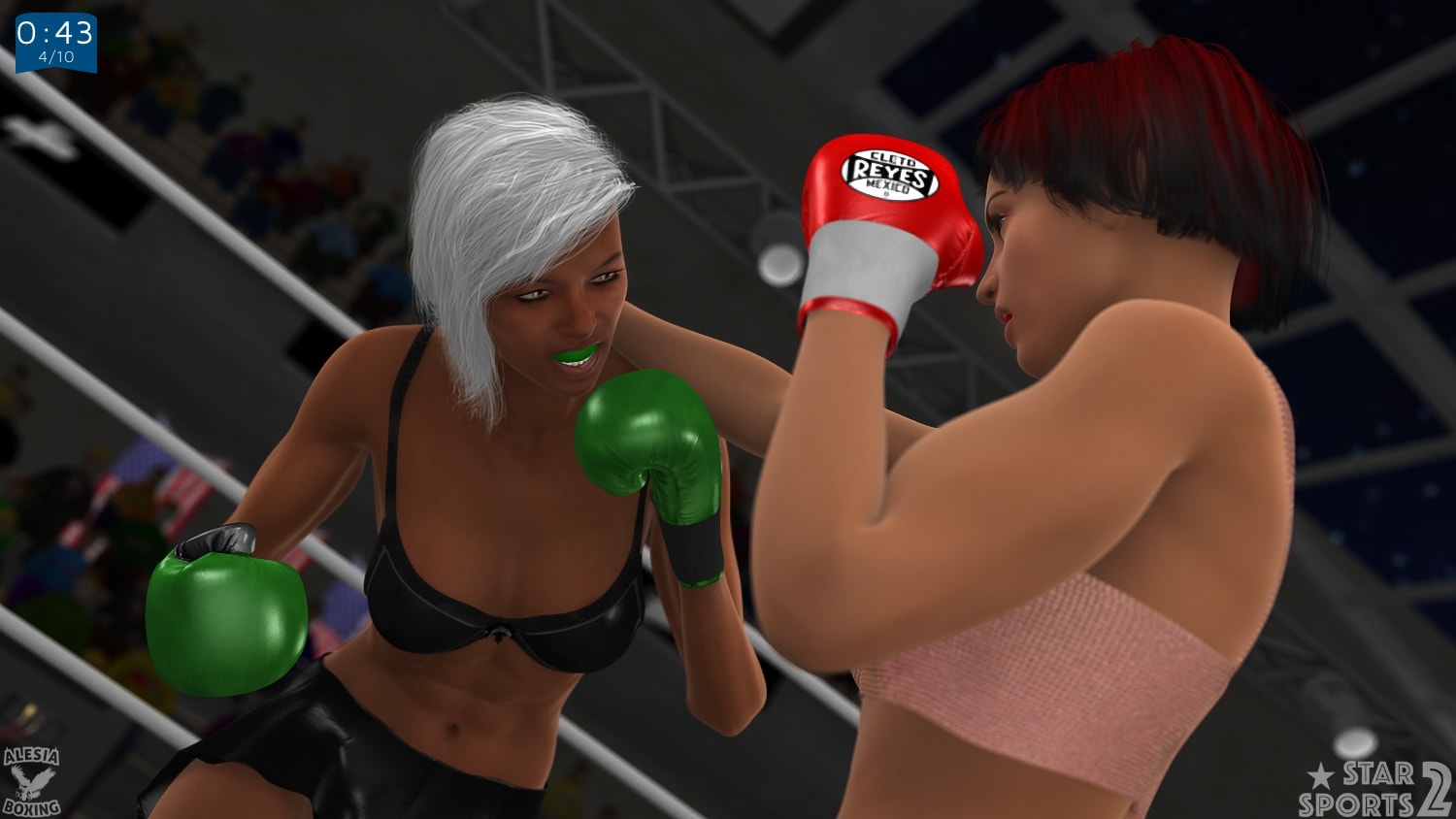 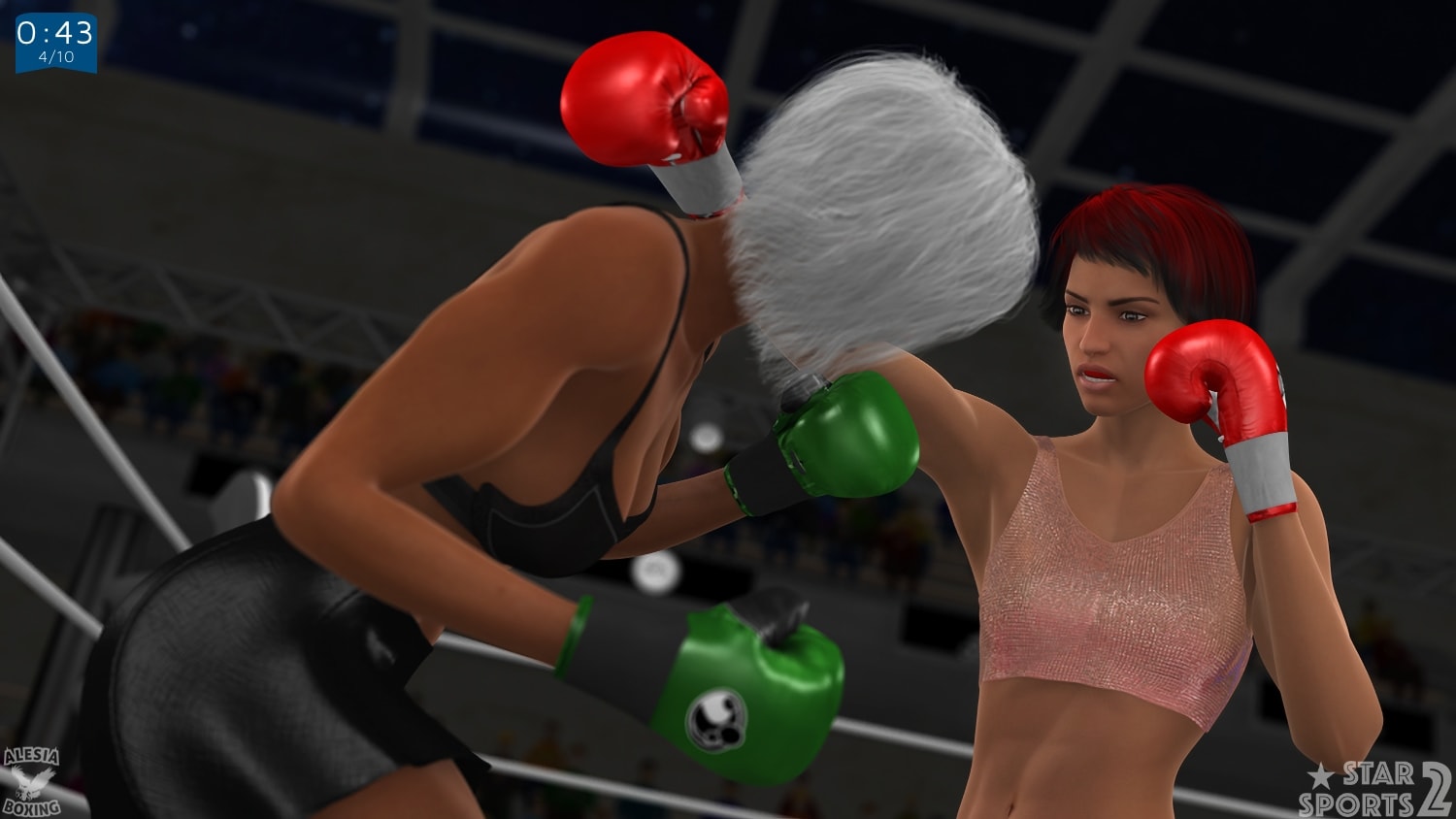 The fight progresses with Taylor winning rounds and accumulating a strong lead on the scorecards.

Jim: “After seven rounds, we currently have a landslide in Grant’s favour. She is outboxing Espiga with speed, accuracy and power shots from all angles.”

Warren: “I have her winning every round so far for a 70-63. Grant’s reputation as a fast puncher with a deeper background made her the favourite, but the way she fights has gone through a makeover. She’s patient. She picks her spots. Instead of doing the work by attacking, she lets her opponent do it for her. And she enjoys it!”

For good measure, coach Sam Romero asks his protégée to take the body more often in the final stretch. She agrees and lowers her stance the rest of the way to slow the puncher down. Taylor cruises through the last three rounds for what appears to be the most professional win of her career. 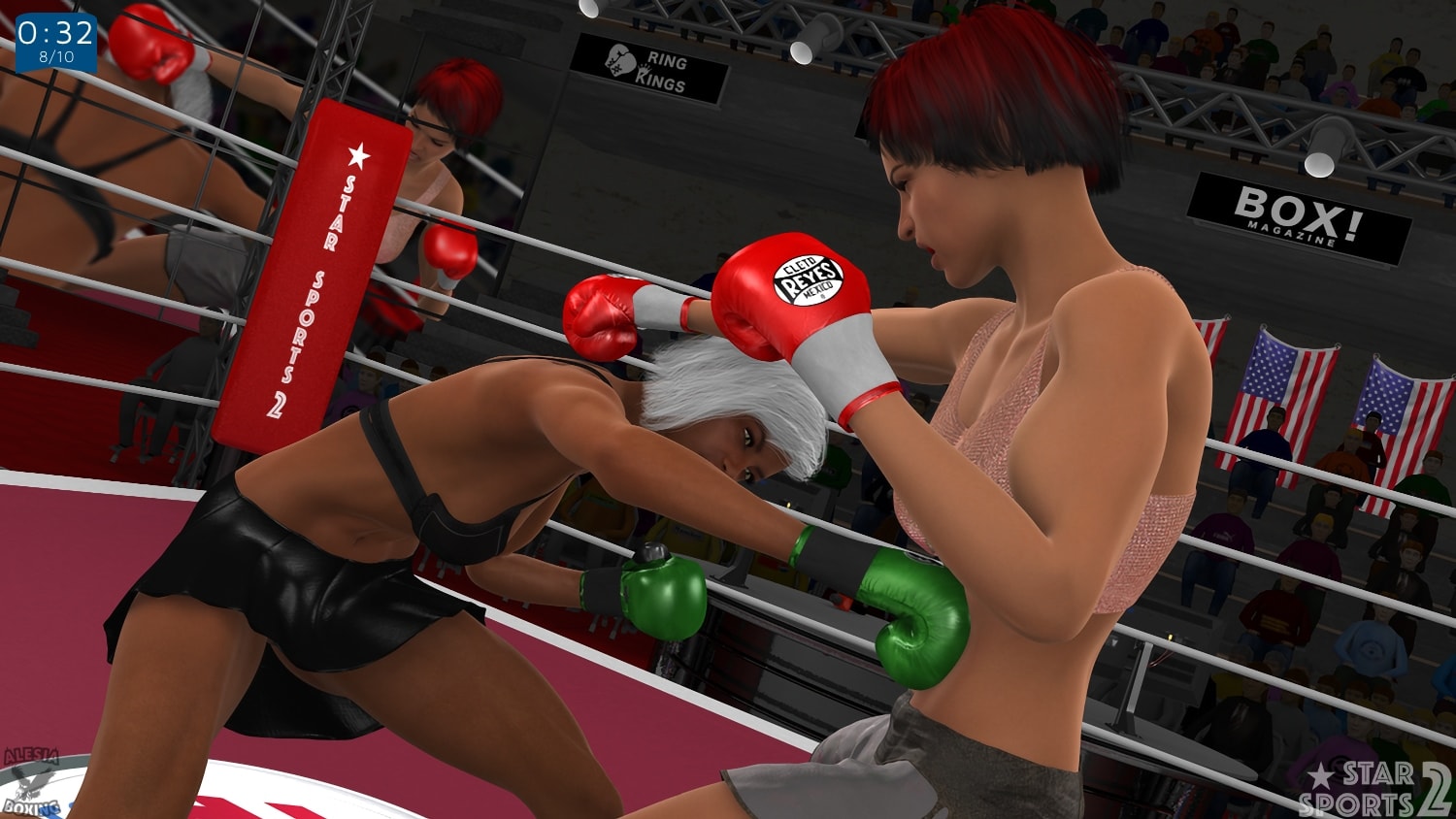 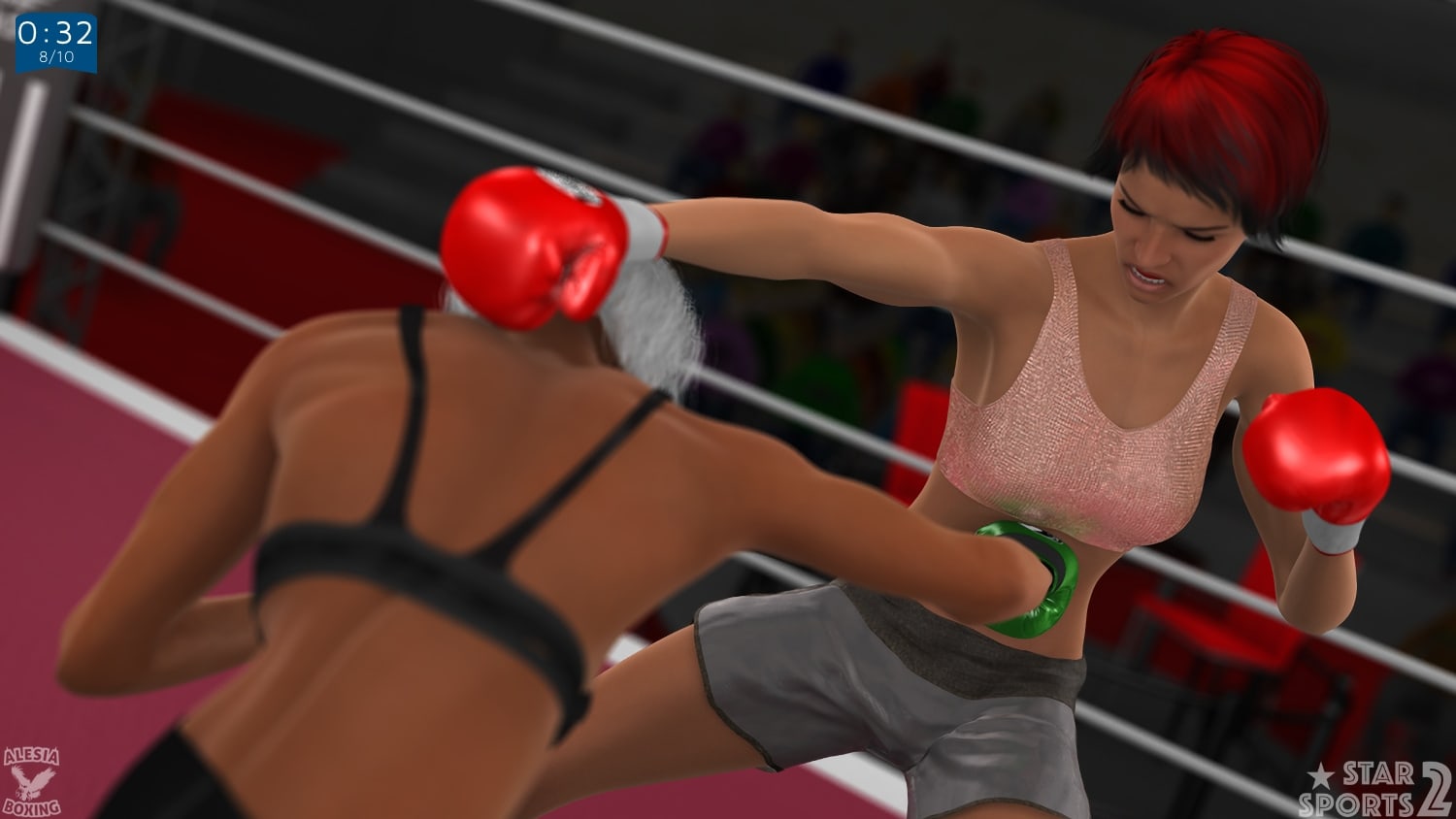 When we go to the scorecards, no one doubts whose hand will be raised.

Ring announcer: “All three judges score the bout 100 to 90 in favour of the winner, by unanimous decision… “Peppermint” Taylor Graaaaannnnnnnnnnt!”

In the background, the crowd and coach Sam applaud Taylor for this performance. Taylor’s record improves to 17-1 (11 KOs) while Catarina’s drops to 6 wins and 2 losses. 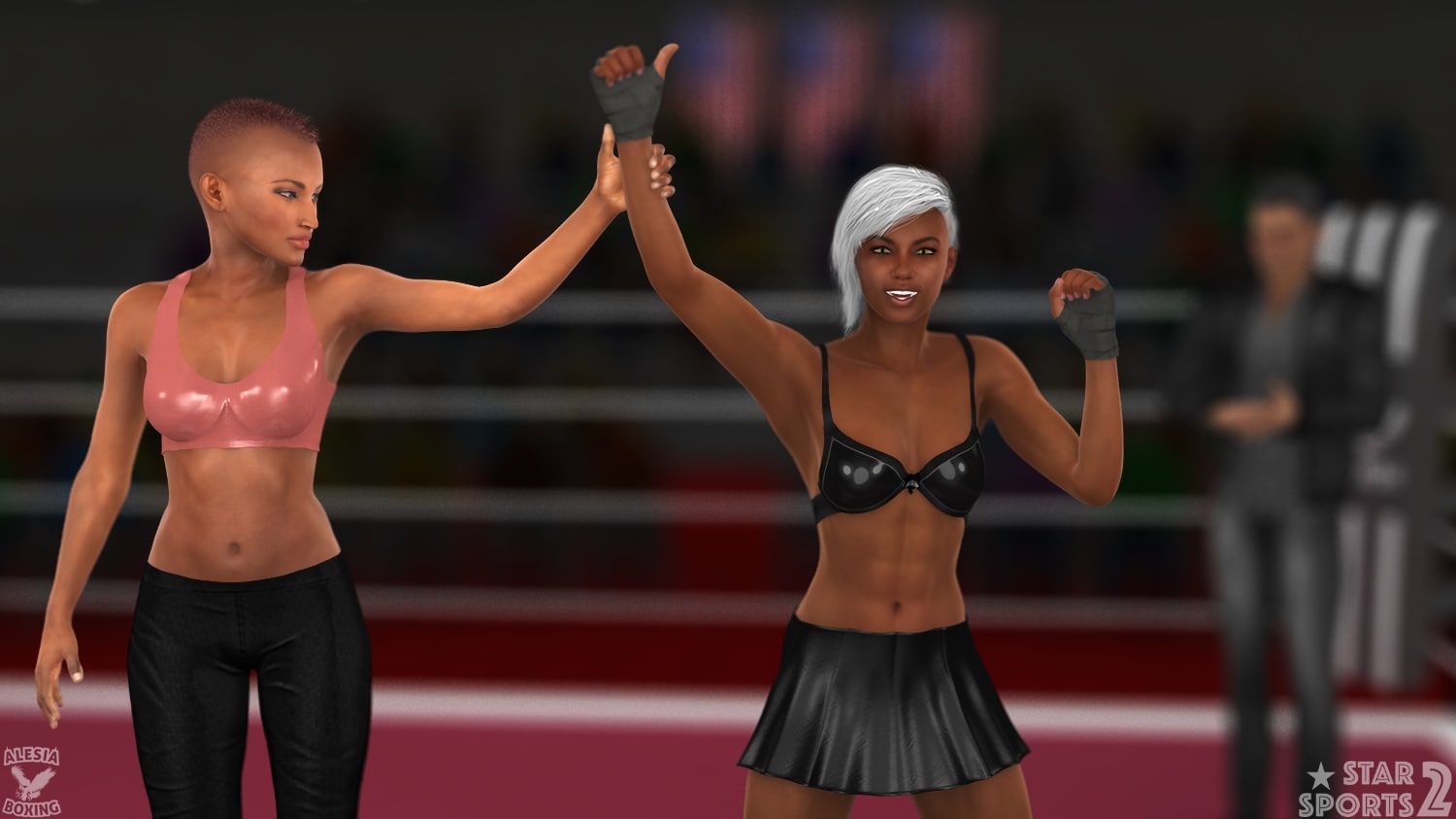 She still wants it

The TV crew has the winner lined up for an interview.

Jim: “Congratulations, Taylor. This win was a clean sweep. You boxed differently today, and never seemed to care about a knockout.”

Taylor: “Thanks! I don’t mind the fact that Catarina was still standing at the end. The plan was to be the best fighter for 10 rounds, with fast hands and better protection. I had my reasons to get this decision.”

Jim: “Was it the aftermath of your first pro defeat?”

Taylor: “Yes and no. After that loss, I moved here in New York and found a coach, Sam Romero, who told me that either I change or he kicks me out of the gym. It’s a shock for someone who has been the division’s number one contender, and I can’t say I liked it, but it was necessary. My goal is still becoming world champion, and I believe I’m the most talented Super Lightweight.”

Jim: “Do you want a rematch with Schumann?”

She looks at her coach with a devilish grin.

Taylor: “If I call Alesia out in front of Sam, I’m getting fired from my gym!”

Taylor: “I want a title shot, badly, but I’m still adjusting to a new approach and there’s work ahead. I’ll fight for the belt when I’ll be ready to give the worst nightmare to whoever is my opponent.”

Jim: “A stark warning from a talented fighter. Taylor Grant, thank you.” 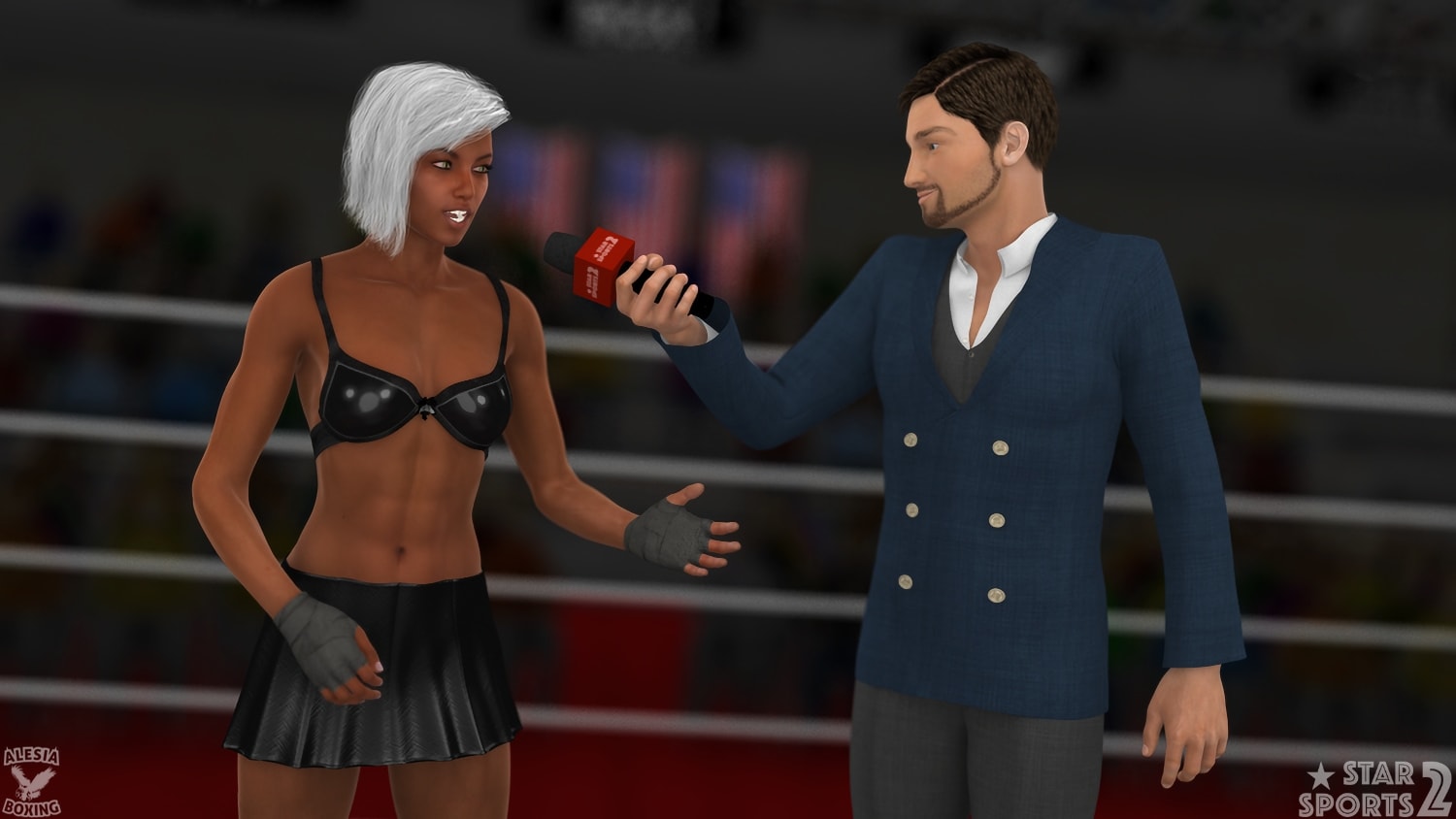 While the coach was clear about fighting style, he never forbade a little showboating. Taylor treats herself to a triumphant pose as she walks out of the arena, stopping by the big screen that shows her as the winner. 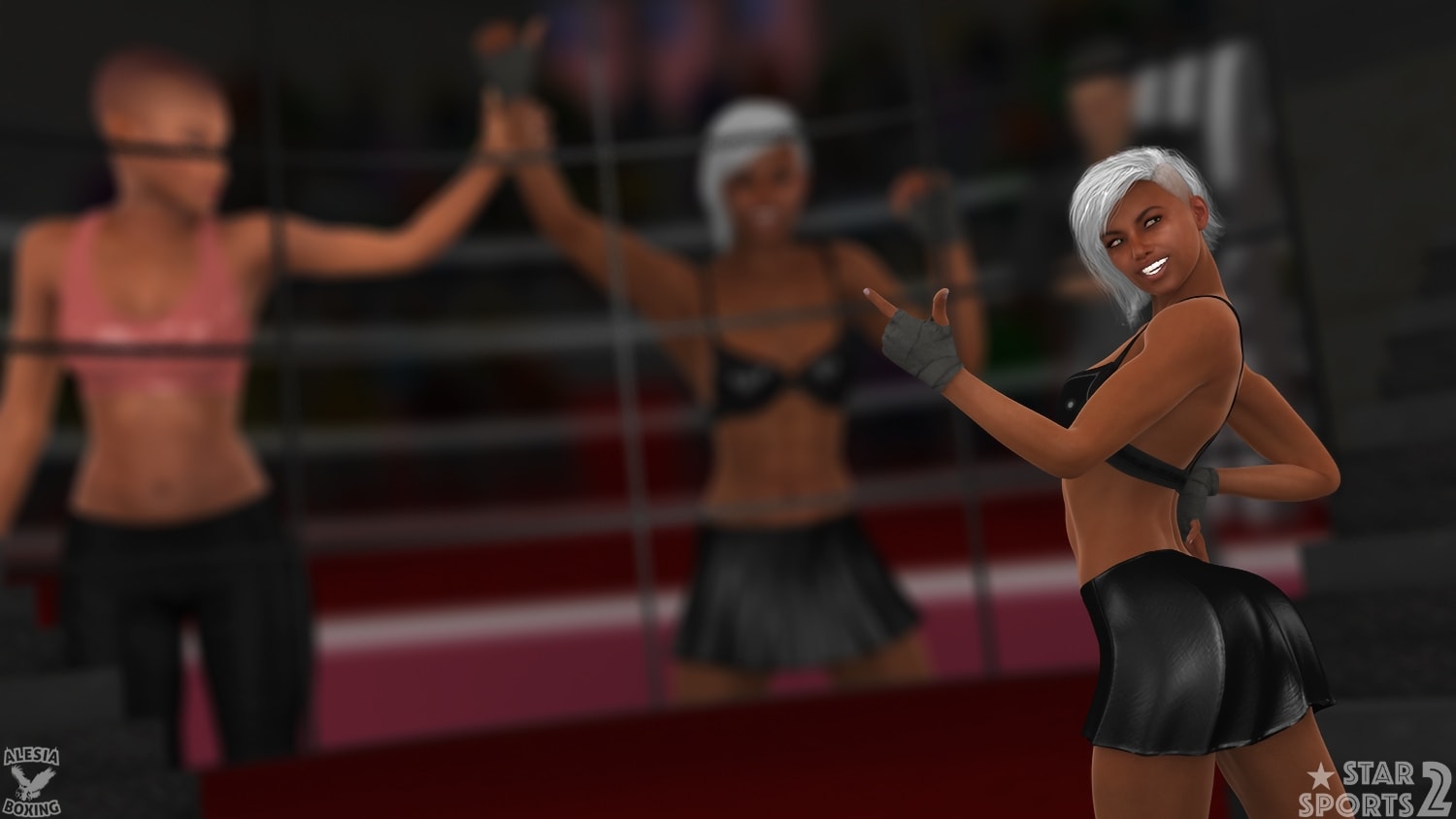 Congrats from the champ

In Munich on the next day

Regina: “What do you think?”

Alesia: “Impressive. It was only Catarina Espiga, but that was gorgeous fighting. And that outfit?”

The world champ uses her phone to send a congratulatory tweet to the winner. 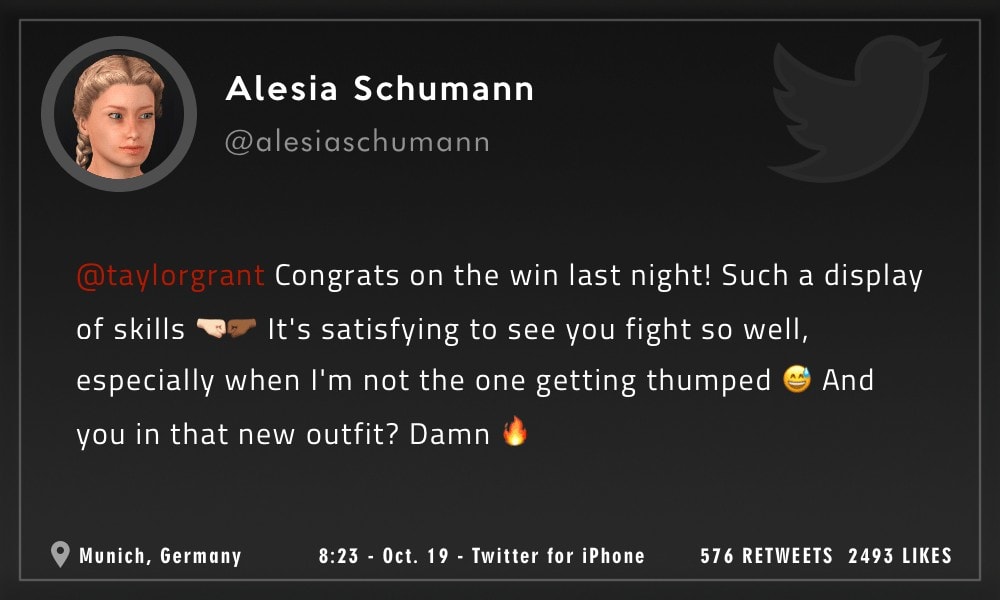 Her former opponent responds on the same day. 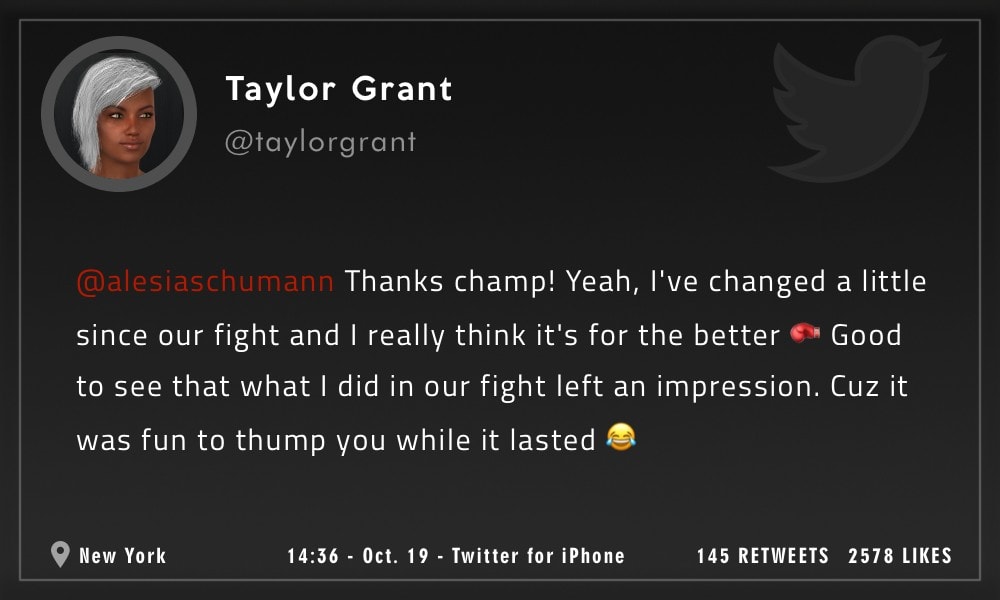