A Trap is Set

DING! The 3rd round begins here in the co-main event. The Canadian Cobra has two rounds in the bank and has been told to be patient and see what Steffi has to offer. Steffi retreats back into the ropes and dares Virani to attack.

Steffi thinks: I got you with the counter in the 1st round. Here’s a similar trap. It’s see if you fall for this one.

Virani thinks: I know you are trying to lure me in, but I’m not going to play to the same script. Not exactly.

Laila Ali: “The Canadian Cobra is stalking Steffi Slater early in this 3rd round. Side effects from the end of the 2nd round, or is Slater playing a deeper game? Virani is showing her some different looks to see how Slater reacts…” 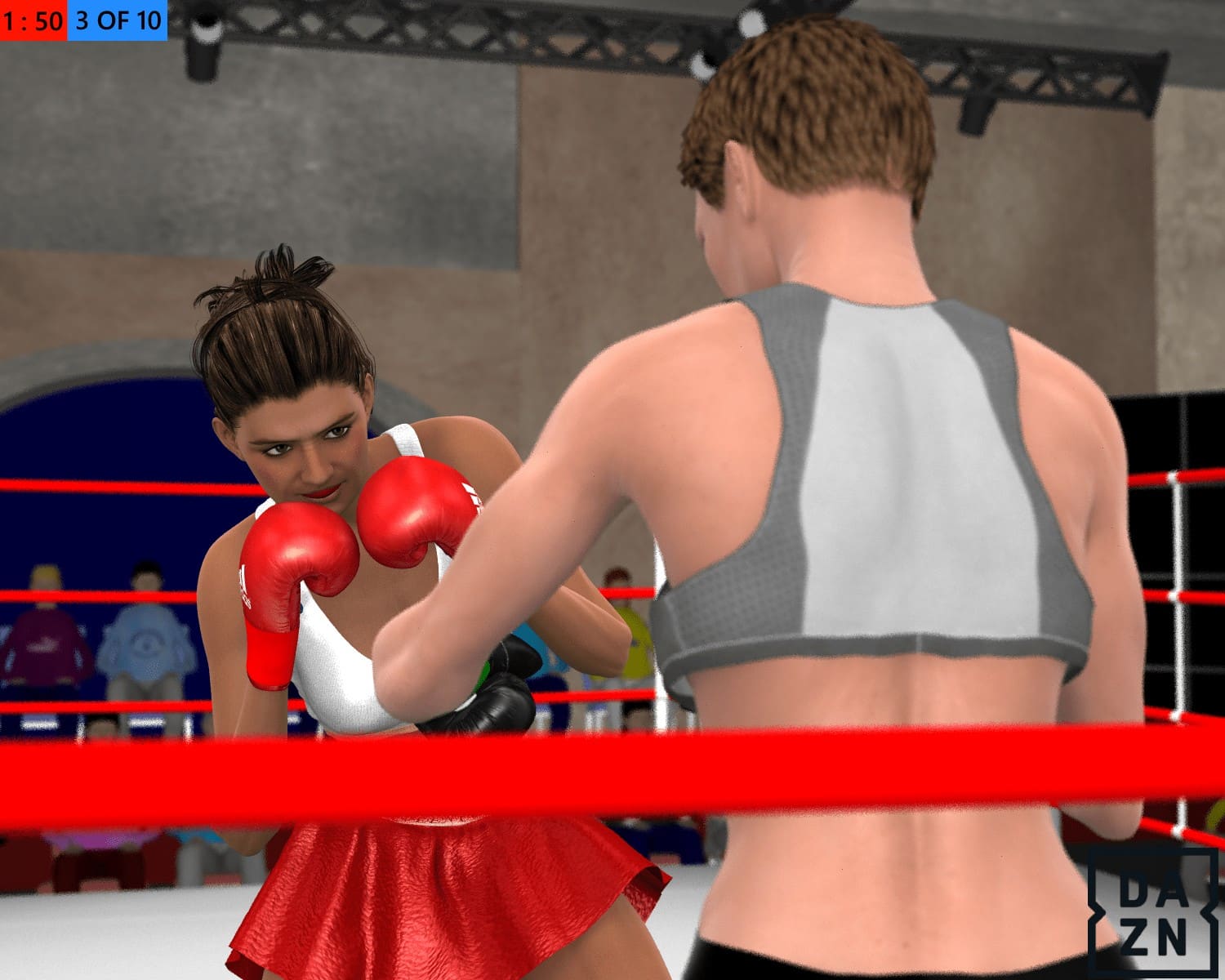 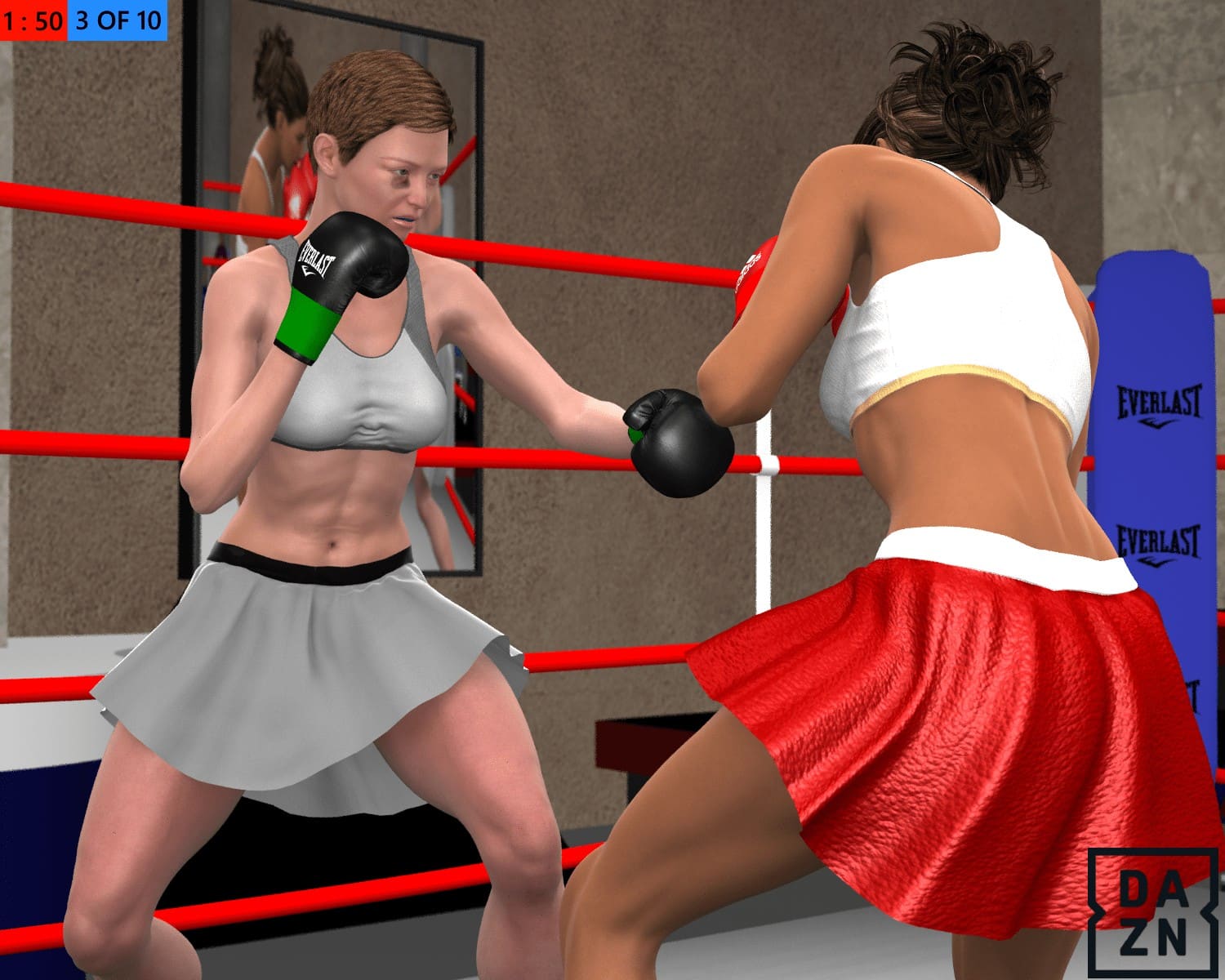 A Trap is Sprung

Virani thinks: You think I’m going up high because I’m a headhunter. I’m changing the script.

Virani feints a high jab that draws Steffi’s guard up high before stepping into a left uppercut into Steffi’s midsection. Red leather connects with abdominal muscles that didn’t quite have the time to react and harden. Those same muscles that might have absorbed the blow when Steffi was 25 or 35 now seem to give way.

Laila: “A tenderizing blow to Steffi Slater’s midsection seems to have hurt The Lady in Gray. She may regret trying to lure Virani into the ropes…and now she’s on the ropes and hurt by MacVicar. Not exactly where one would want to be.”

Virani thinks: “Okay, and now another…” 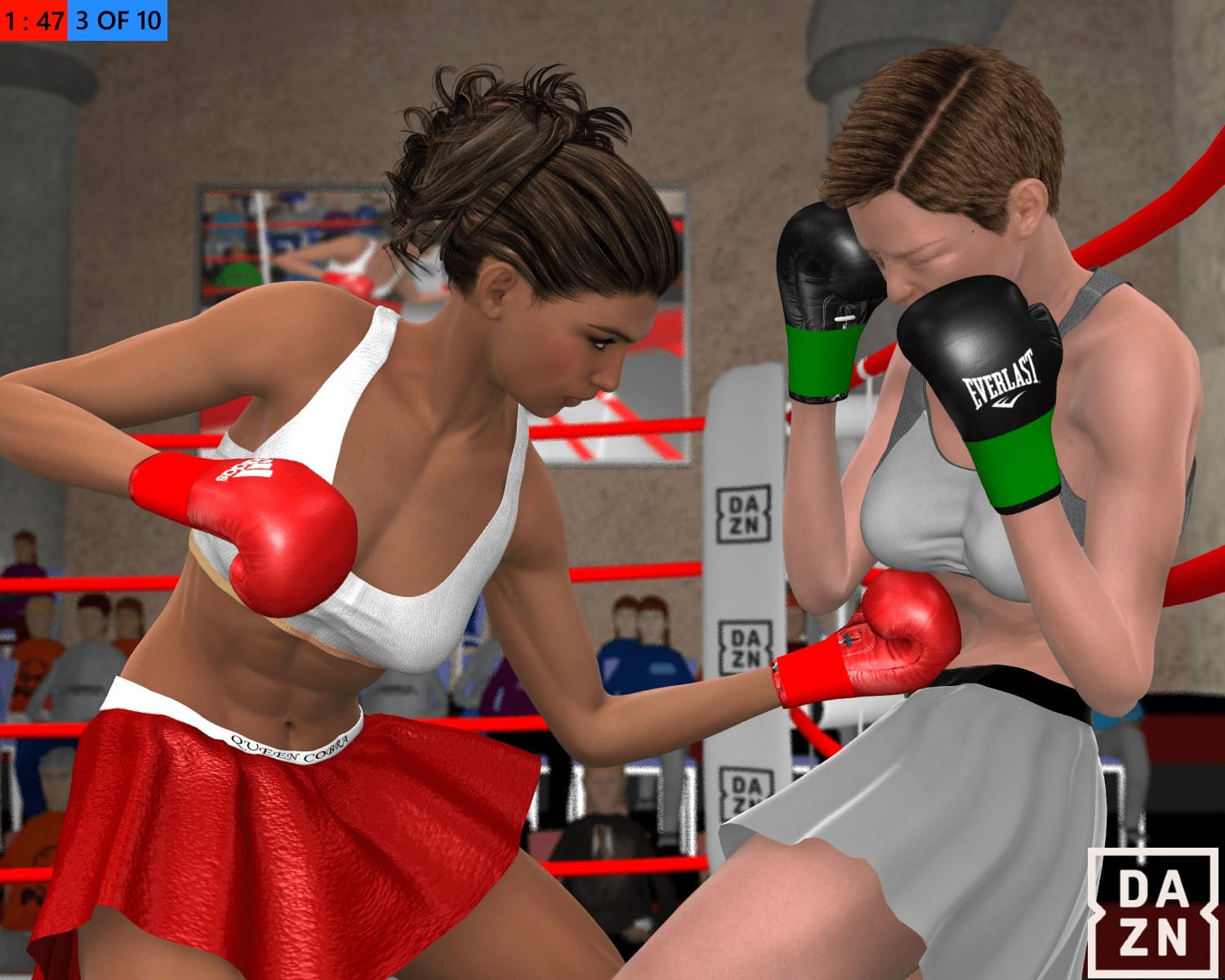 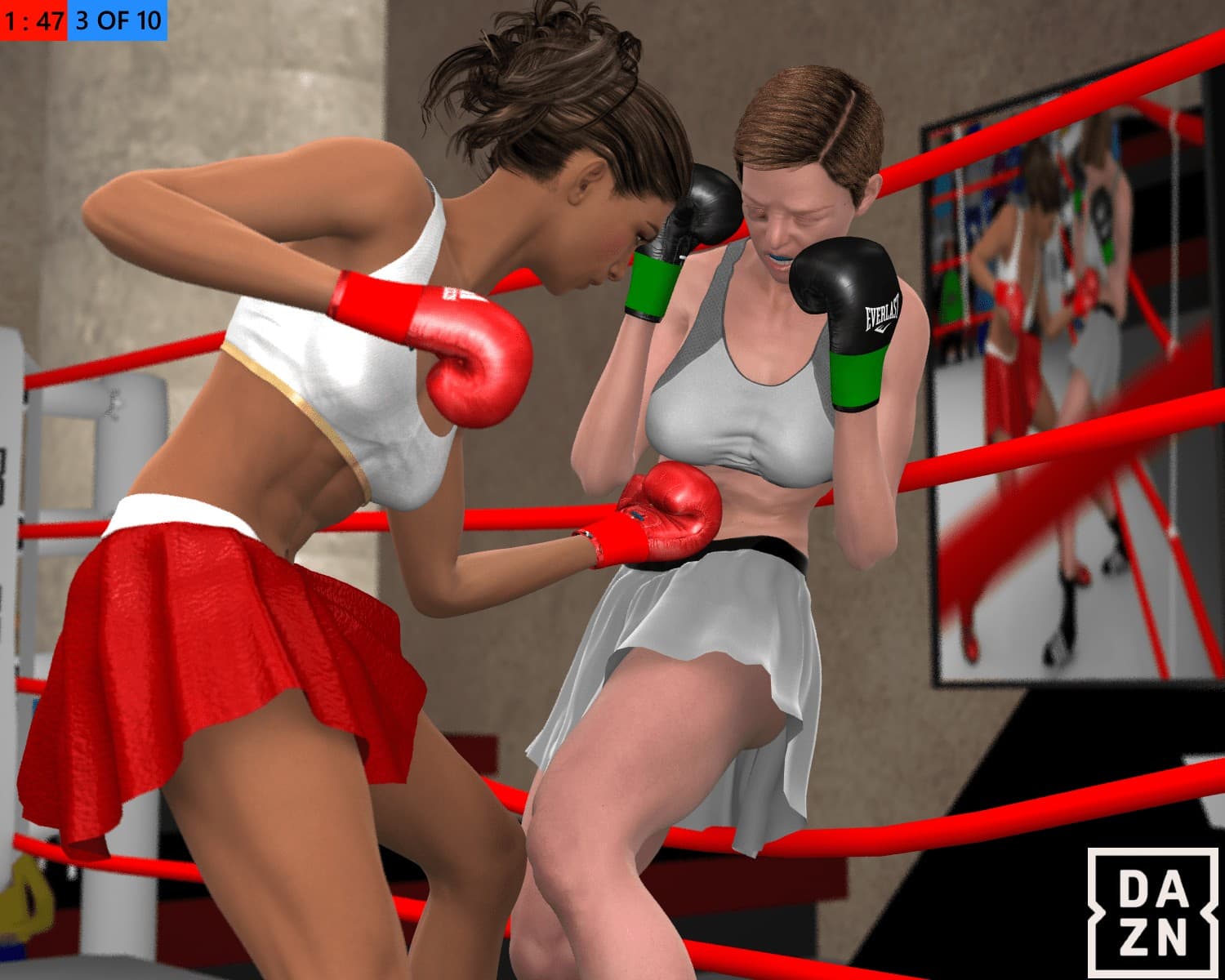 The Canadian Cobra stays on Steffi, throwing an awkward, but effective uppercut that catches Steffi right under the chin, surprising the veteran, who had clearly expected a right to follow a left…but Virani’s breaking of the expected pattern pays off bigtime. If Steffi was hurt before, she’s in big trouble now. 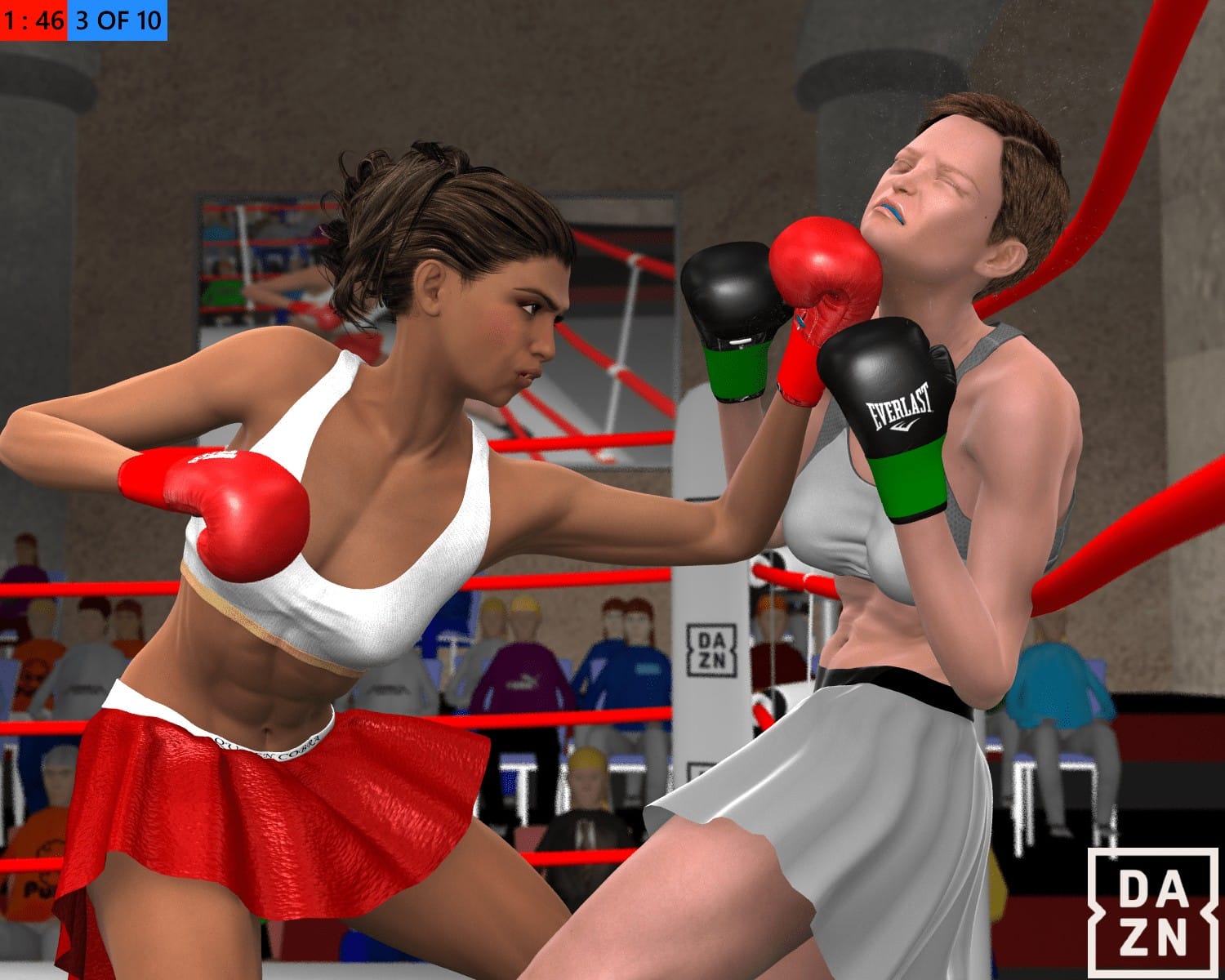 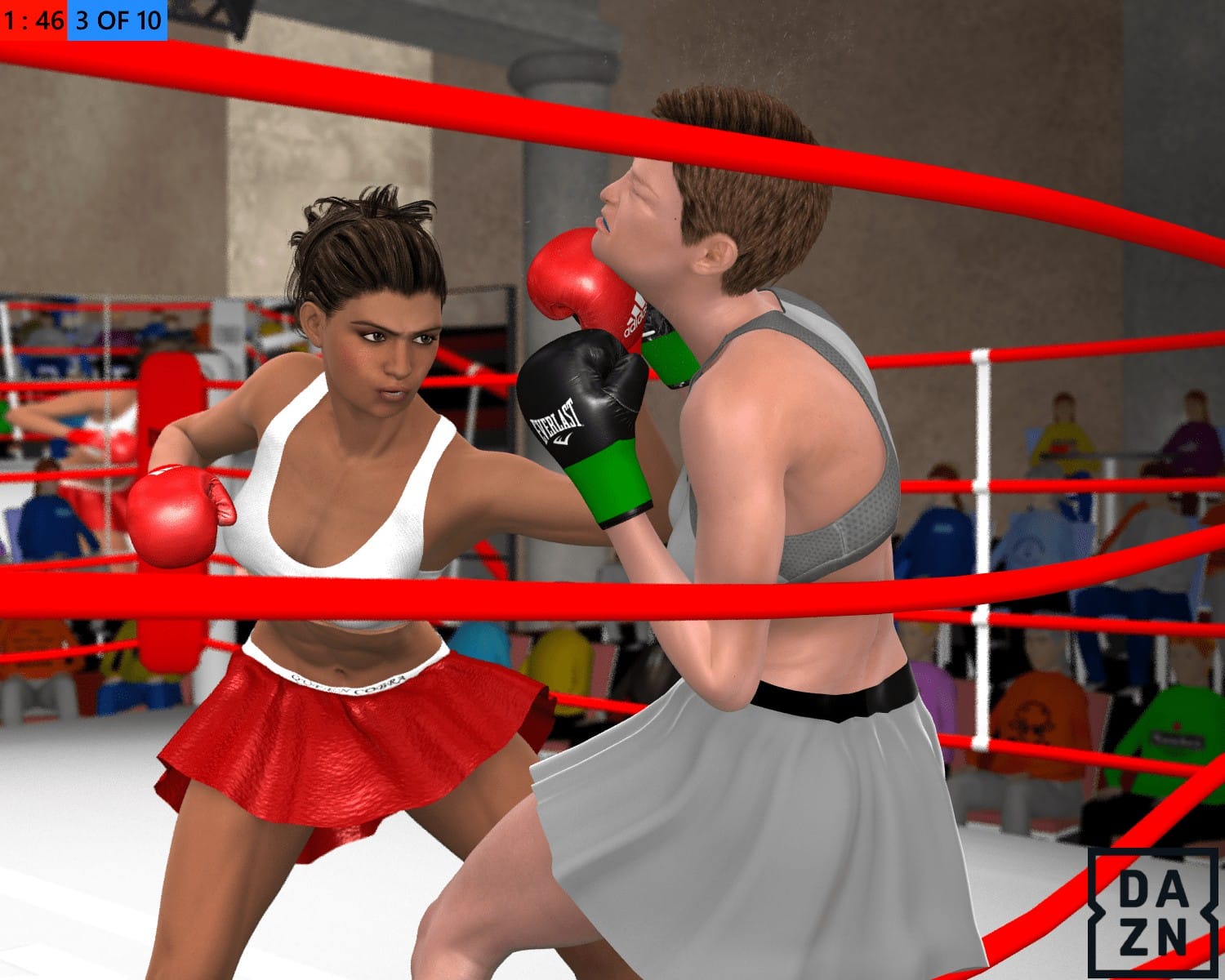 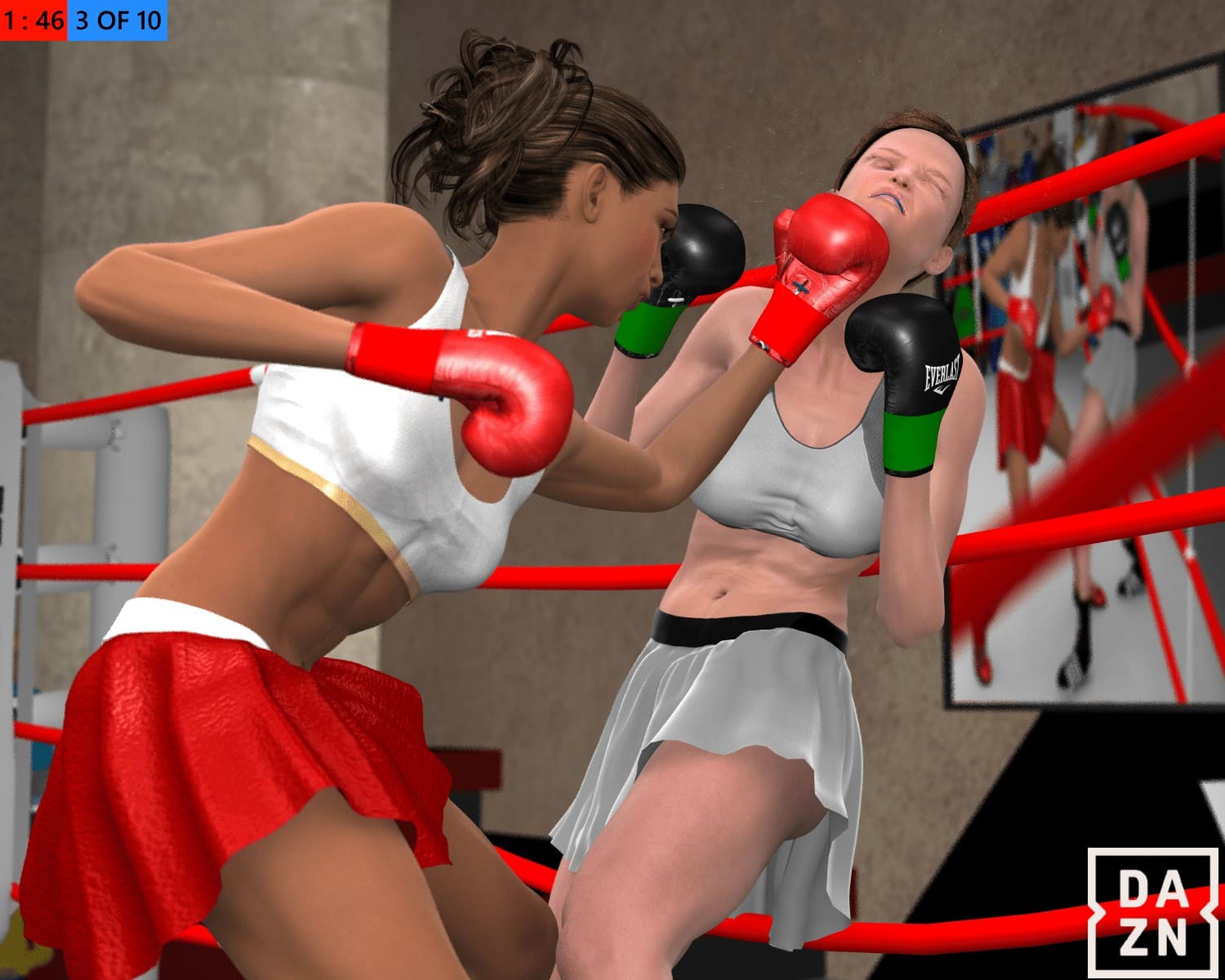 A stunned and staggered Steffi has taken too much red leather for the moment, especially after getting her bell rung in the 1st two rounds.. Her guard collapses as her legs lose strength. Never one to miss a good opportunity, Virani MacVicar throws yet another left – this time her vaunted left hook. There’s no guard from Steffi and no chance that the Canadian slugger can miss.

Laila: “Oh my goodness a 3 punch combination of left hands has turned Steffi Slater inside out! The power of the Cobra looks like it has undone the long time veteran.”

Virani thinks: Get up from that one. 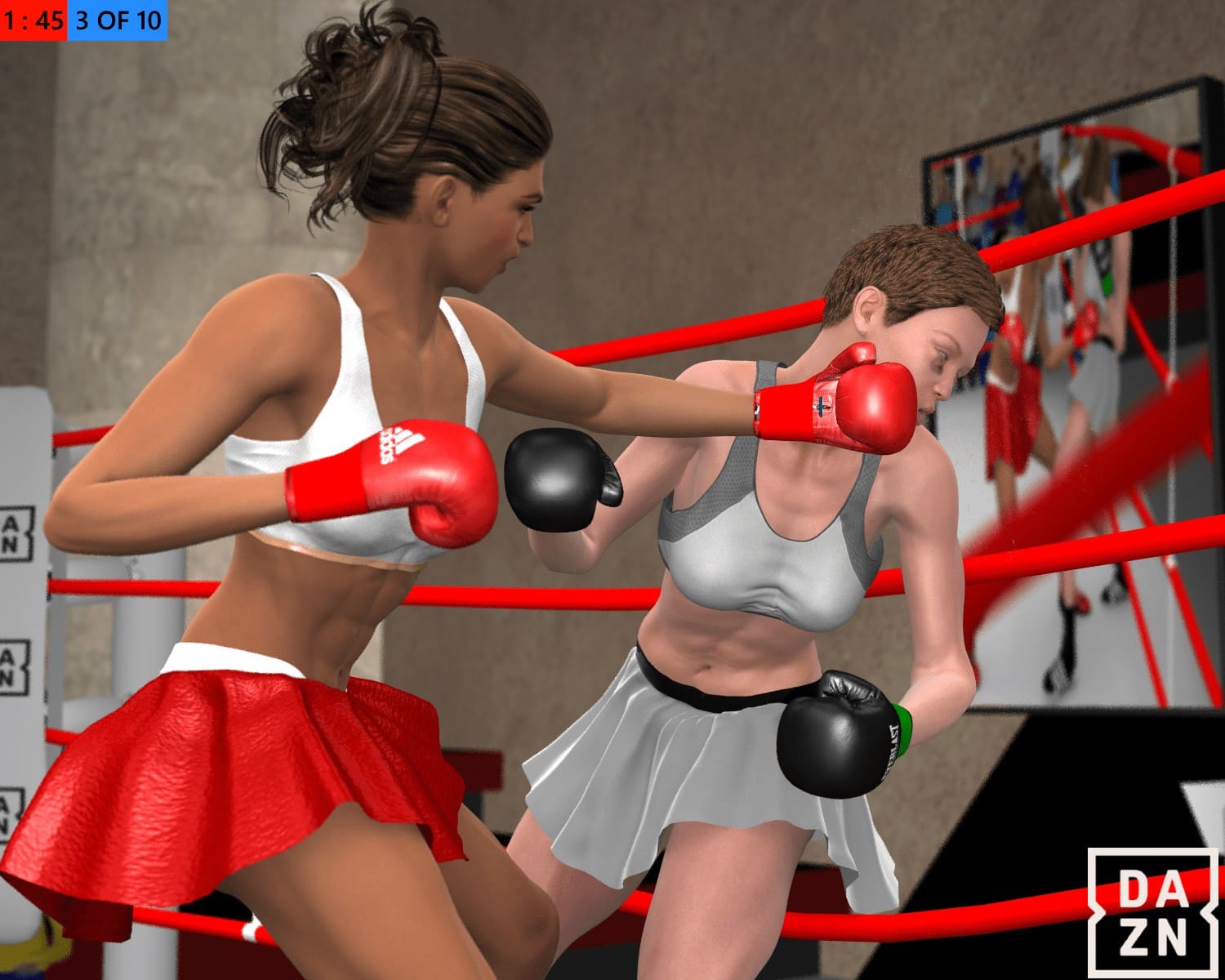 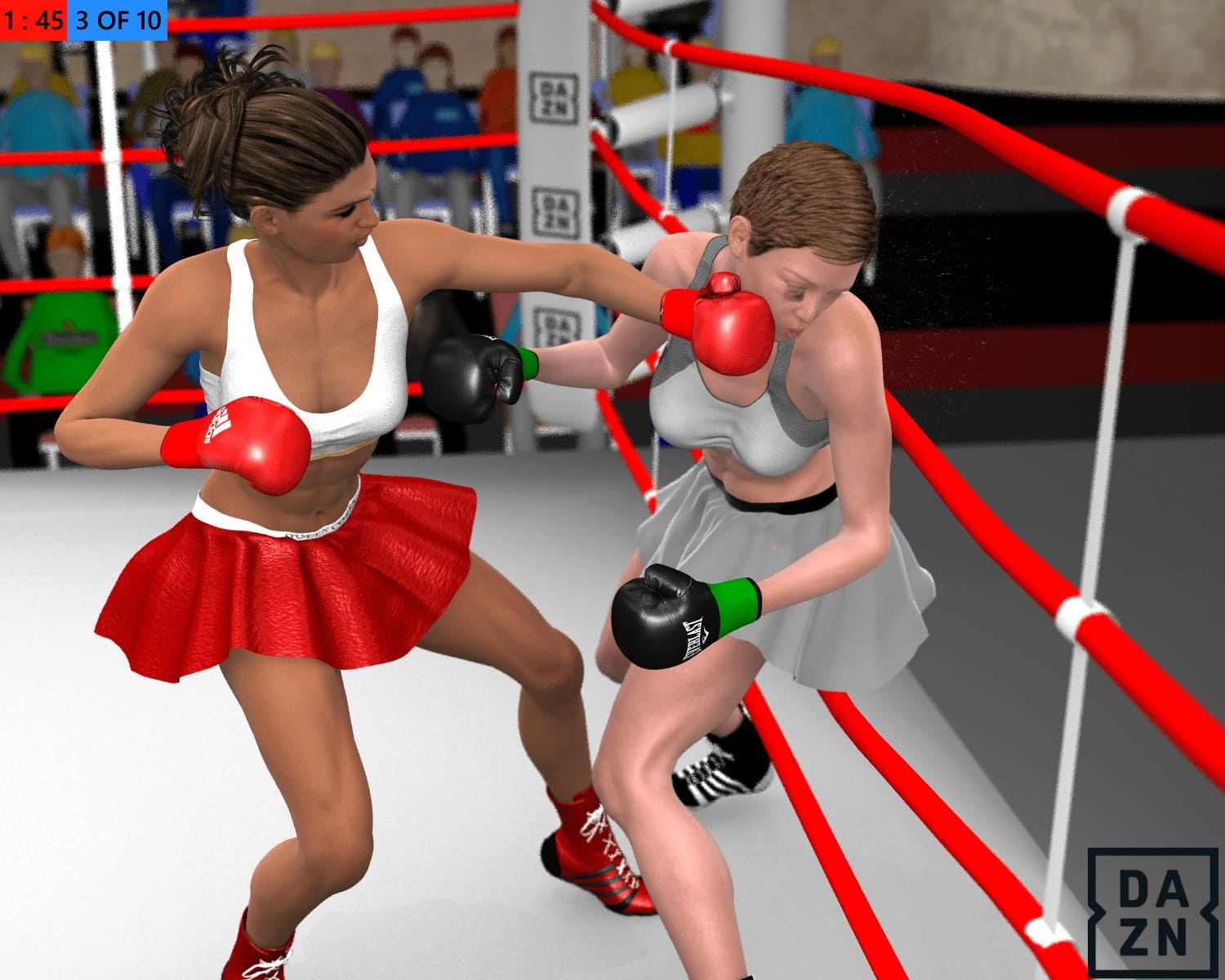 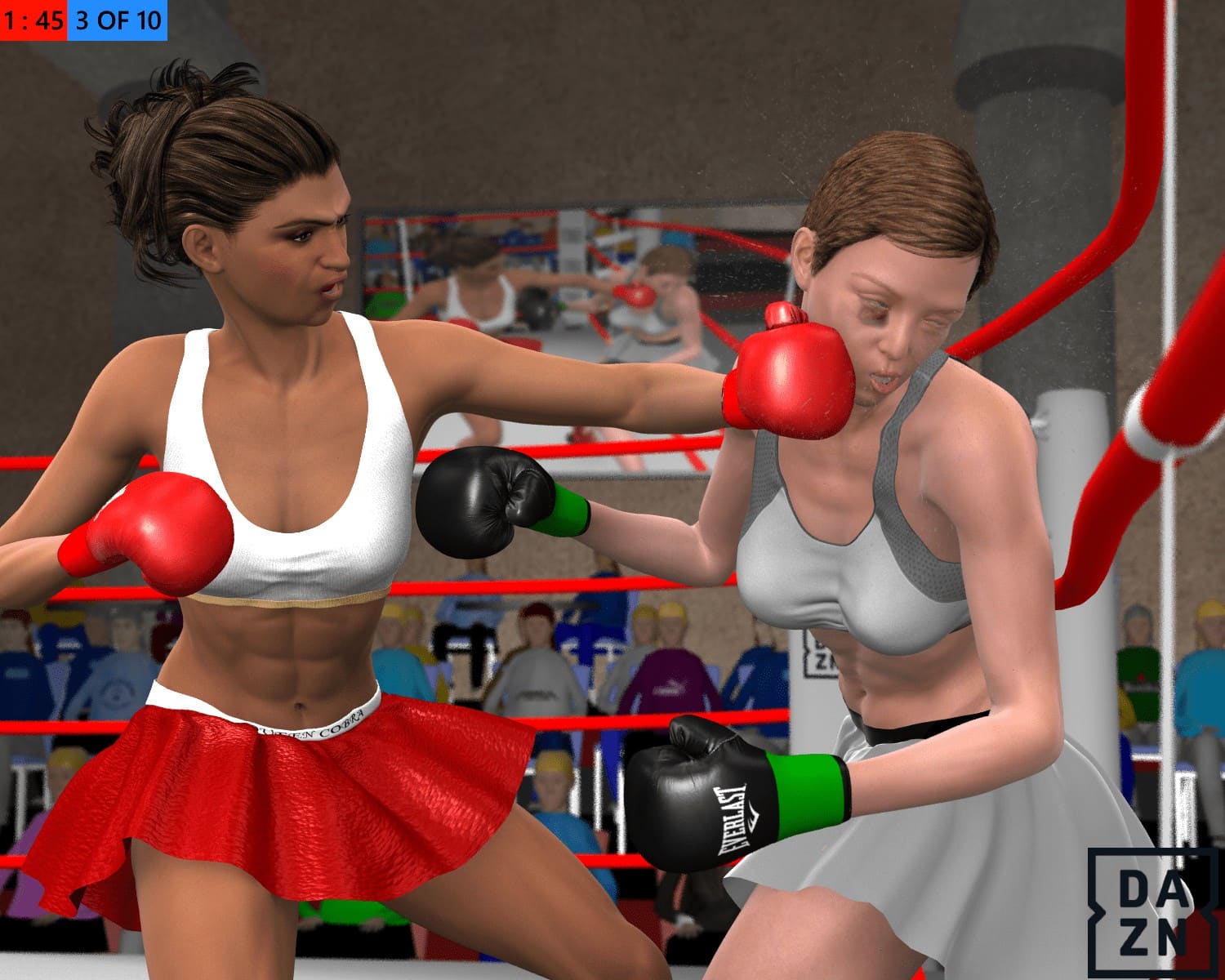 Turned absolutely inside out by 3 courses of red leather, Steffi Slater twists down to the canvas, falling hard on her shoulder. Her left arm is actually outside of the ring, draped over the bottom rope. The Canadian Cobra stands dominant over her fallen opponent, almost seeming angry at Steffi for falling down.

Laila: “Slater is down! The normally durable Slater has gone down for the second time in three rounds, and it’s going to take some doing to get back to her feet!”

Virani thinks: This was a top 5 fighter? I faced a better fighter in my 4th pro fight. Pathetic. 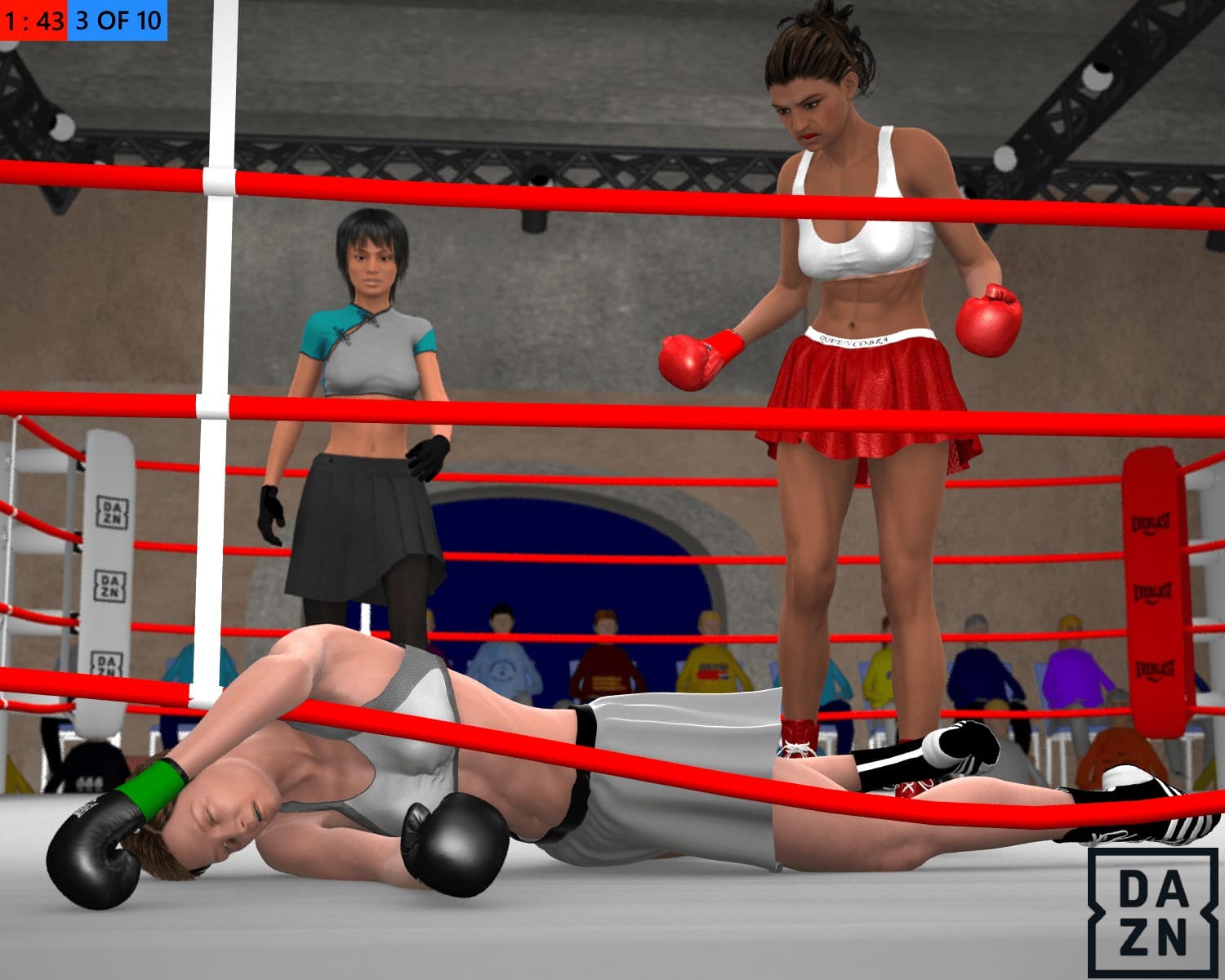 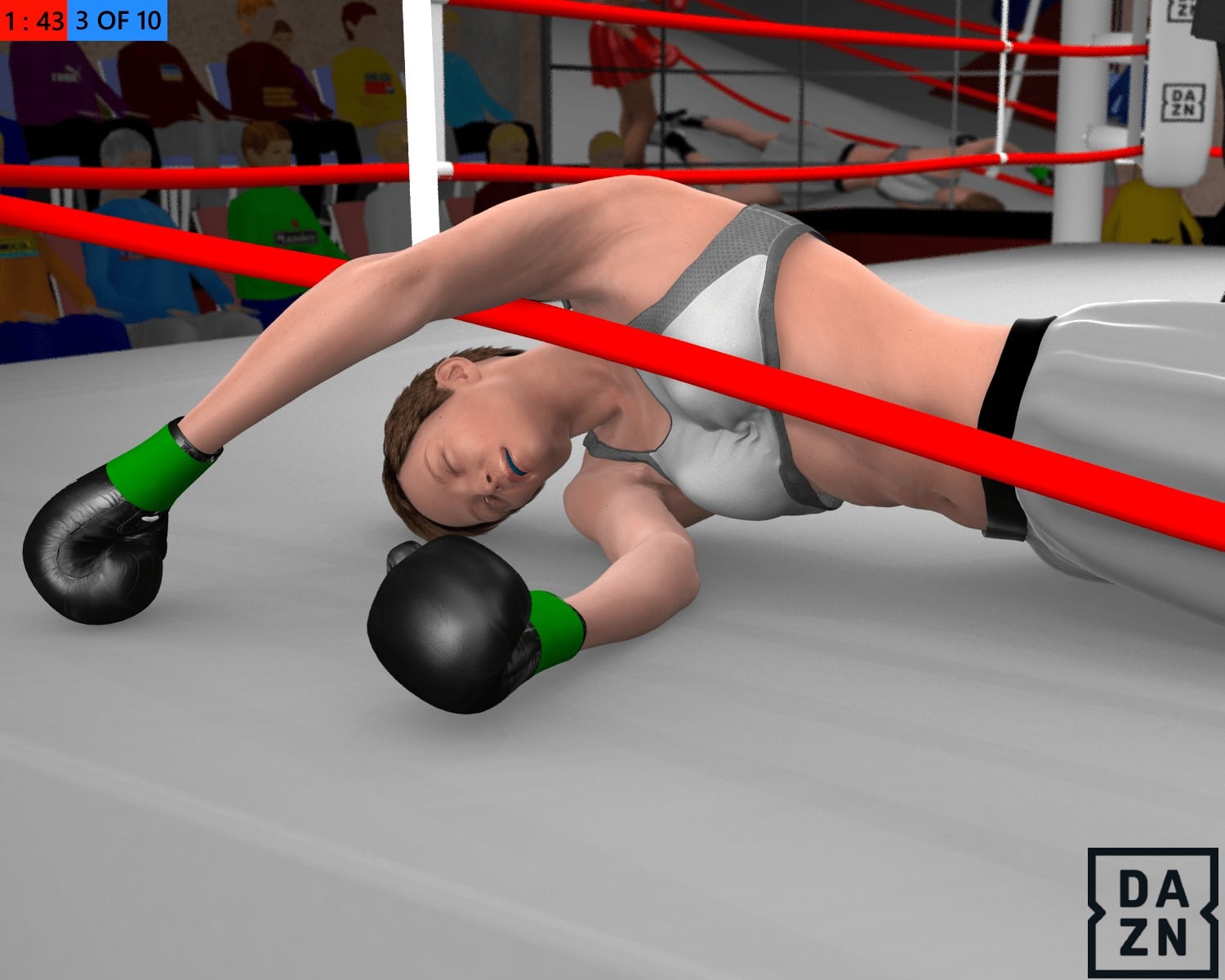 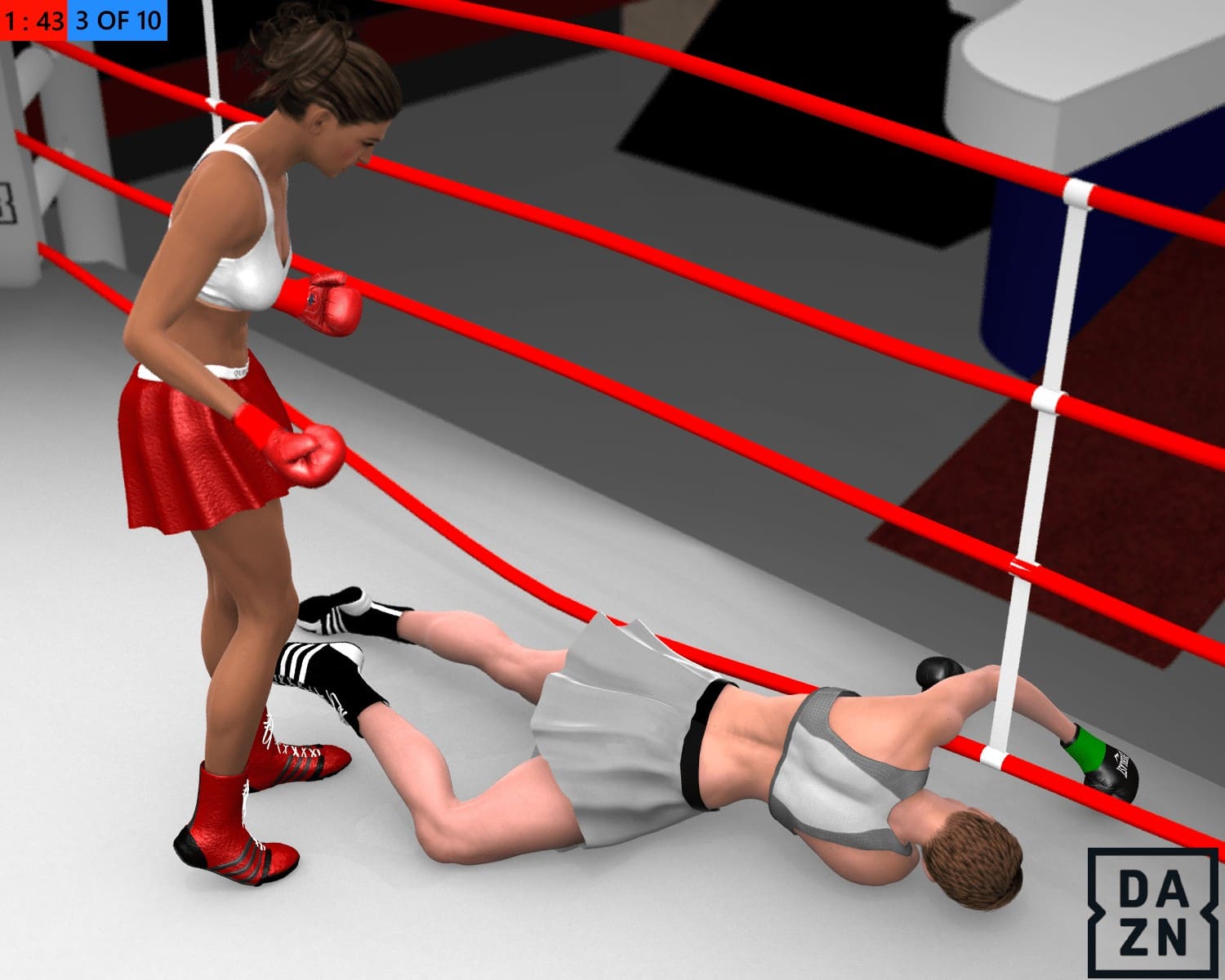 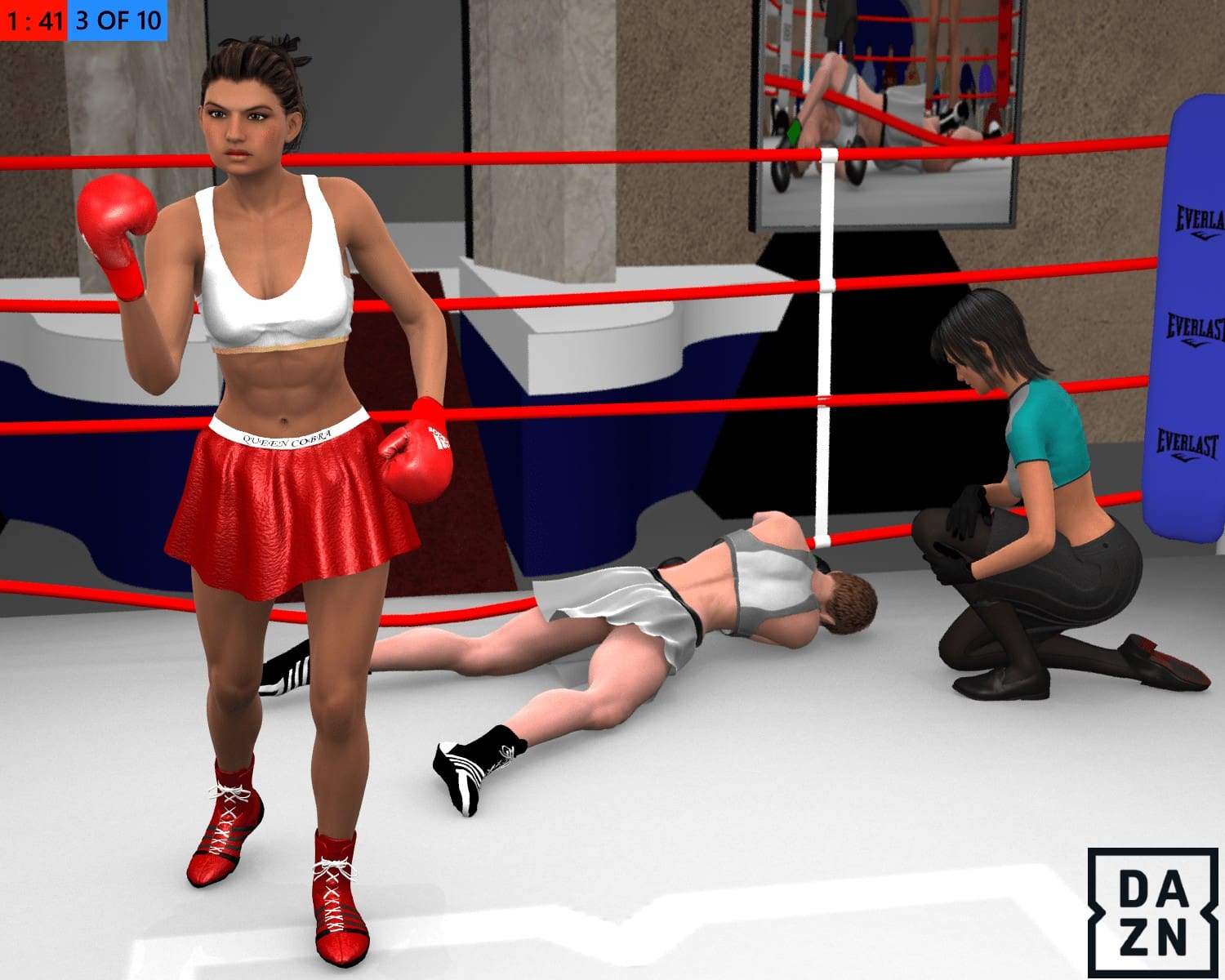 Referee Kanti Agrawal kneels beside Steffi after the knockdown. After seeing little movement from the downed fighter, even the usually lenient Kanti can’t be bothered with a count – she waves off the fight at just over 20 seconds into the 3rd round as Virani collects a stunning knockout victory.

Kanti thinks: Damn, this girl is done. There’s no point in letting this go any further.

Laila: “AND THE FIGHT IS OVER. A truly stunning performance from Virani MacVicar as she passes her biggest ever challenge with flying colours. Surely this is the kind of display that will make Virani a darling of the rankings organizations – truly a title challenge must be coming up next.”

Virani poses as the decision is confirmed, basking in the moment of her triumph. 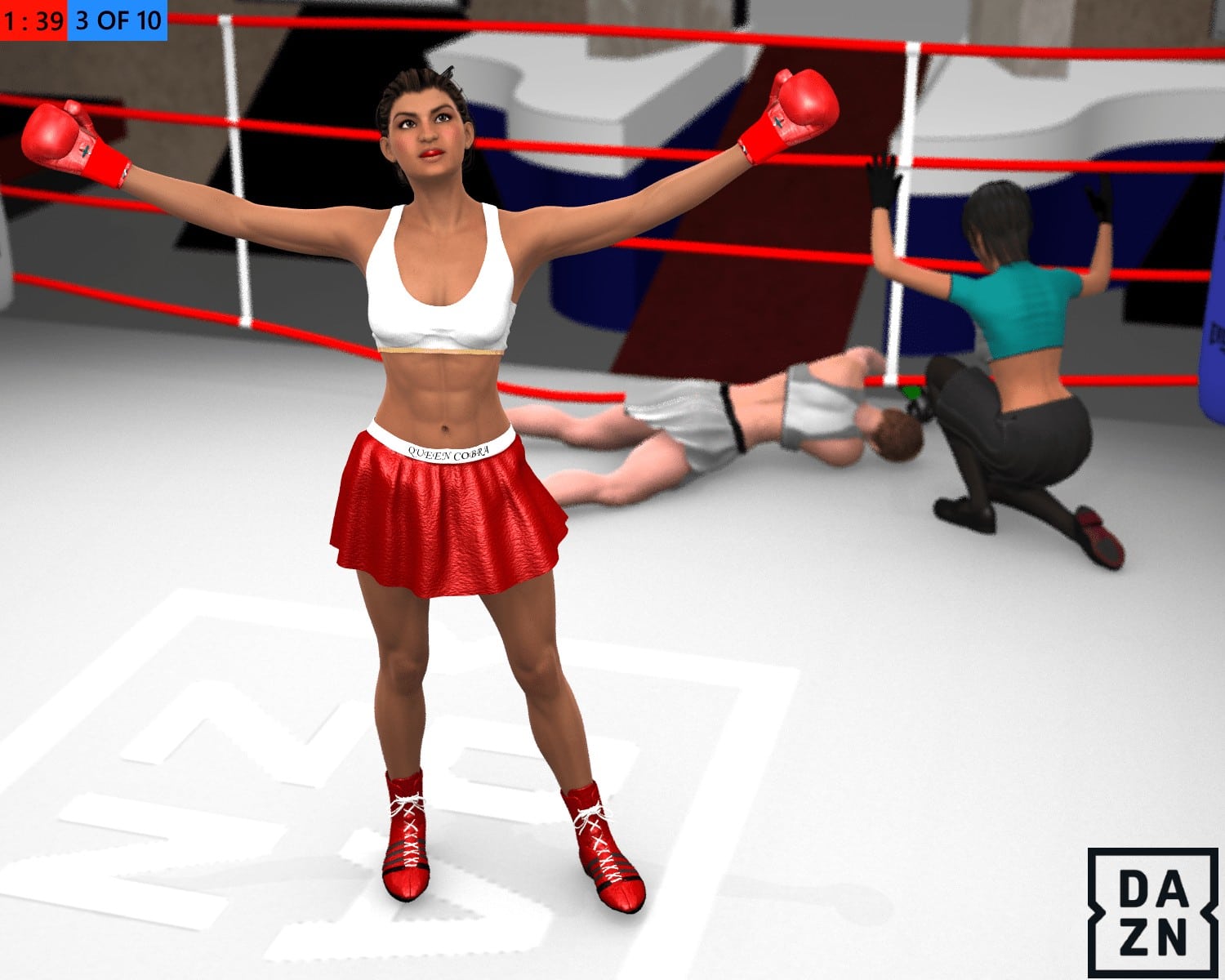 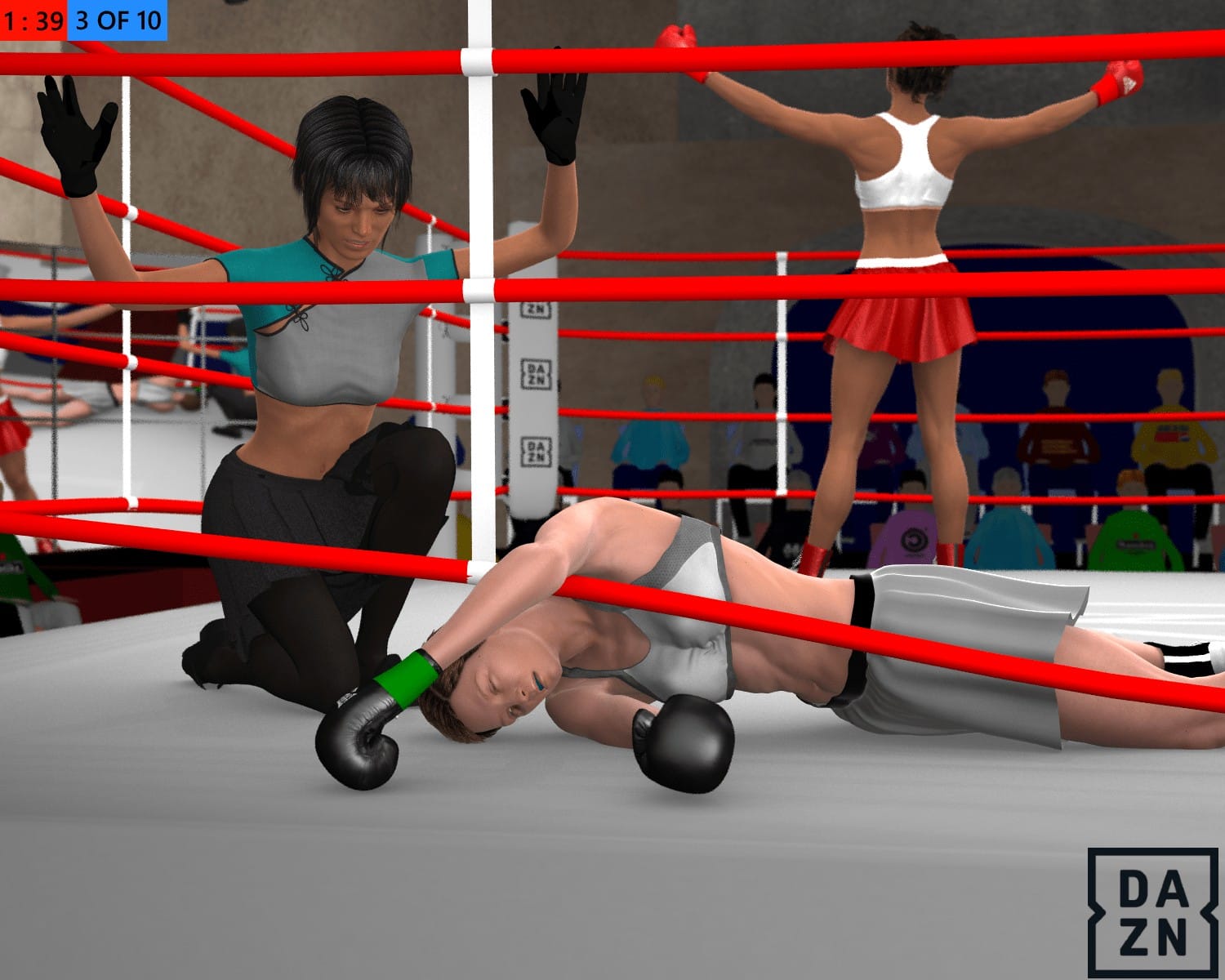 The defeated Steffi Slater is quickly checked over by the medical personnel ringside before escaping to the back. The veteran has just been embarrassed in a high profile fight, and doesn’t want to deal with the fallout at the moment. The network nor Virani mind – this is her moment.

Ring Announcer: “Ladies and Gentlemen, this bout comes to a dramatic close just 21 seconds into the 3rd round as referee Kanti Agrawal has stopped the contest, declaring the winner, by way of KNOCKOUT, ‘The Canadian Cobra’ Virani MacVicar!”

Virani gets her arm raised by Kanti after collecting her 11th pro win. Her celebration isn’t just the cheerful, happy-go lucky Virani that we usually see. There’s a bit of fire in the Cobra. A bit of agression that didn’t get unleashed.

Kanti thinks: I seem to be raising this girl’s hand a lot lately. Not that I mind!

Virani thinks: Best win of my career. Steffi was a chump compared to me. Now I’m going to make sure I’m fighting for a title next. No more preamble. It’s time to do what Alesia did and cement my own legacy. 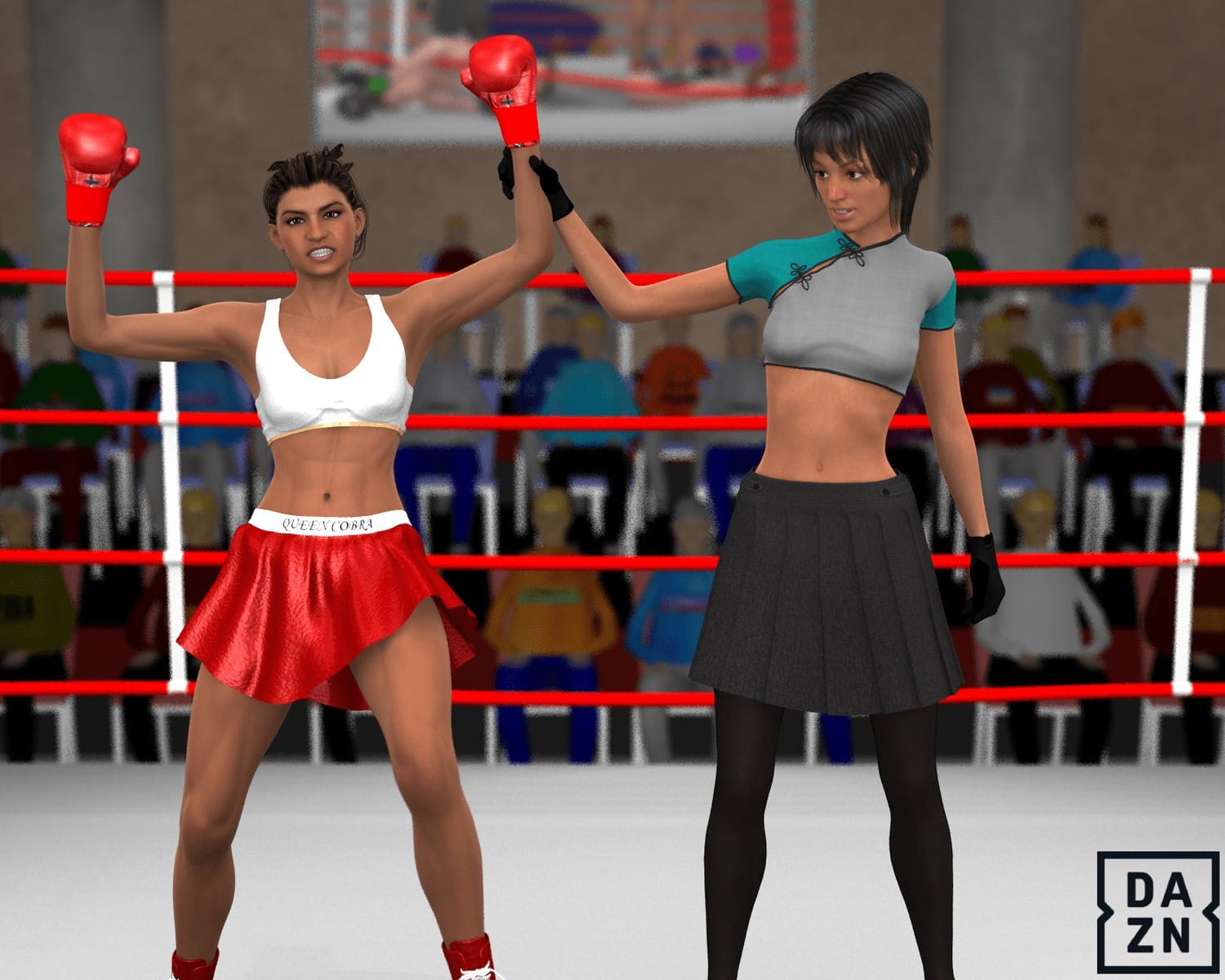 As is usual for a fight on DAZN, especially one that has ended nearly 7 rounds earlier than it was scheduled for, Laila Ali comes in to interview the winner.

Laila: “I am here with Virani MacVicar. Virani, you took this fight on short notice and people were expecting this to be a big challenge for you. Can you explain what happened to make this a short night for Steffi?”

Virani: “This was a fight I wanted. I knew Steffi wasn’t as good as her record stated and I proved that. This fight was simple – she couldn’t take my power. As soon as I hurt her, I knew this was done. I’m the biggest puncher in the division. No one can handle me.”

Laila: “The power was there for sure, but there was composure from you too, can you talk about that?”

Virani: “Right. We knew Steffi would try to play a bunch of games to try to get me out of my comfort zone, but whenever she’d try to get me angry, I’d just make sure I put that emotion away for later. All she had for me was those games. She tried to outsmart me…but we saw how that ended. I think they are still wiping up the drool she left on the canvas.”

Laila: “That ending combination – 3 variants of a left hook or uppercut. Something that you worked on in training?”

Virani: (laughing) “No, I don’t think I’ve thrown that combination ever before, and I probably will never again. I was just in the flow, and they felt like the right punches. She was expecting the right, so I just kept giving her lefts!”

Laila: “A performance like this on a big stage will only fuel speculation of what comes next for you. Especially because up next we have the IBF Title fight between ‘The Empress’ Hee Jung Park and Yenifer Perez up next. What do you feel is next for you?”

Virani: “I want the winner of that fight. ‘The Empress’ saw me fight in person and then turned me down for a fight. I’d love to wipe that satisfied smirk of superiority right off her face. And if Yenifer beats her, then I think I’m next in line.” Virani points into the camera and flexes her left arm, “The truth is, neither of those girls can handle me. They should run scared, and they will, I bet you anything.”

Laila: “Well I’d love to see either of those fights. Enjoy the moment Virani, and we hope to see you back in the ring soon.” 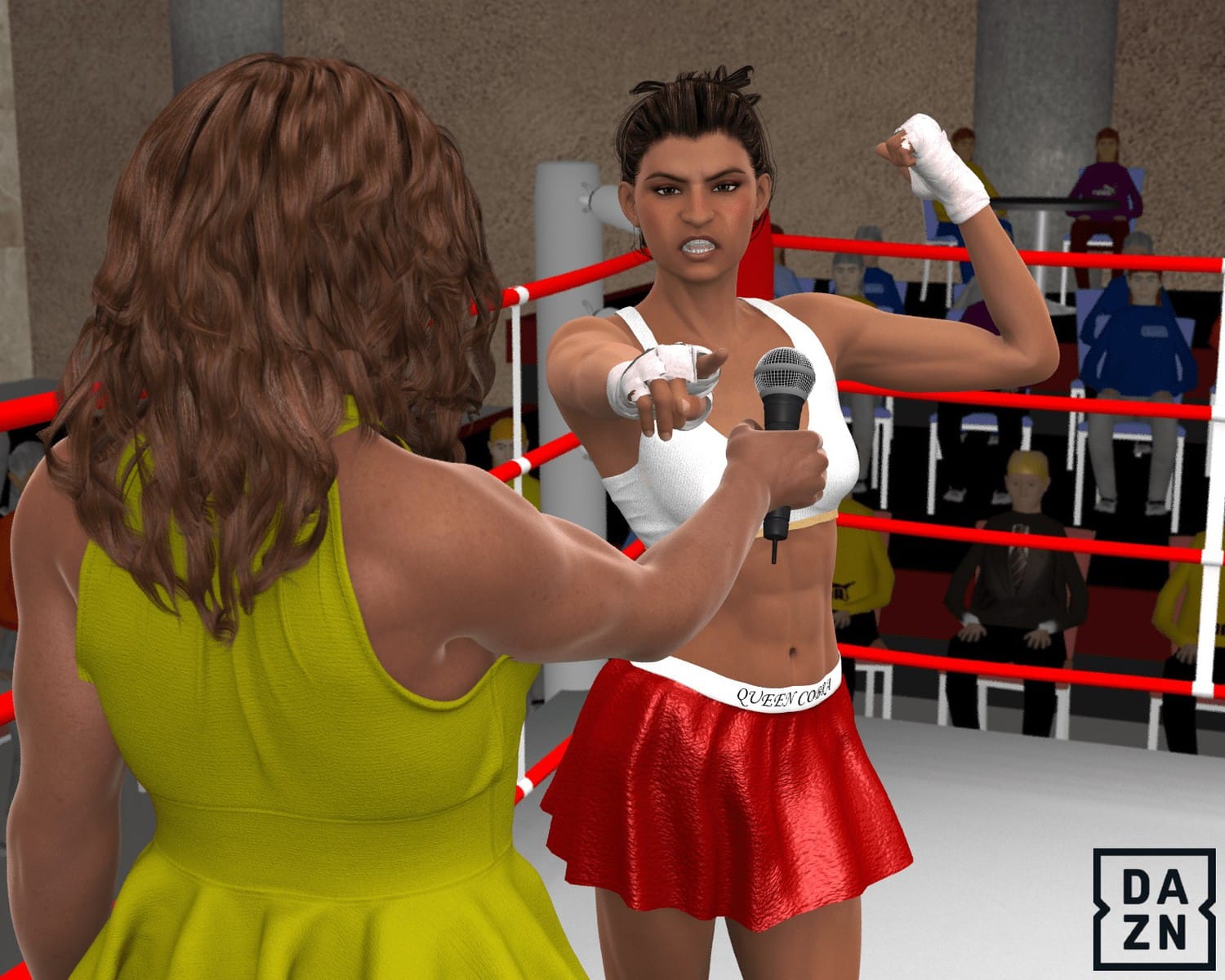 Virani and Thomas share a brief embrace, celebrating the moment.

Thomas: “Where the hell did that combination come from?”

Virani: “I’m pretty sure you must have taught me it at some point.”

Thomas thinks: I think I’m running out of things to teach this girl. Good thing she seems to be doing okay without learning more! 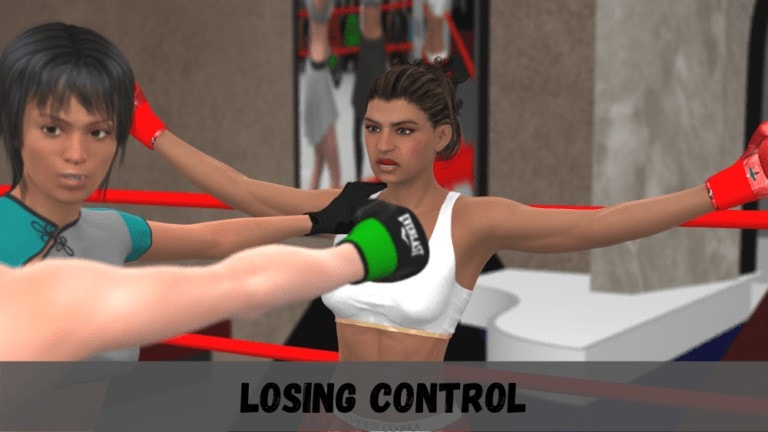