We check in on Michaela Sommer as she is about to begin a defence of her German Featherweight title against the mandatory challenger, Martina Rauch.

Michaela is returning to the ring for the first time after her controversial defeat to Virani MacVicar. She was motivated very much to get back in the ring and her handlers at Final Bell boxing have assured her that she has their backing.

But before Michaela can start fighting the ranked challengers she so desires, she wants to protect her domestic crown. Her opponent for her title defence, Martina Rauch, comes in to the fight with a respectable record of 11 wins and 3 losses. She’s only had one stoppage in her career and isn’t much of a puncher, preferring to work behind the jab and outpoint her opponents. A pure boxer.

An office manager in her day job, she boxes for the love of her sport and desire for competition. Looking sharp in her red outfit, she knows that she is the underdog coming into this title fight and looks to cause an upset. 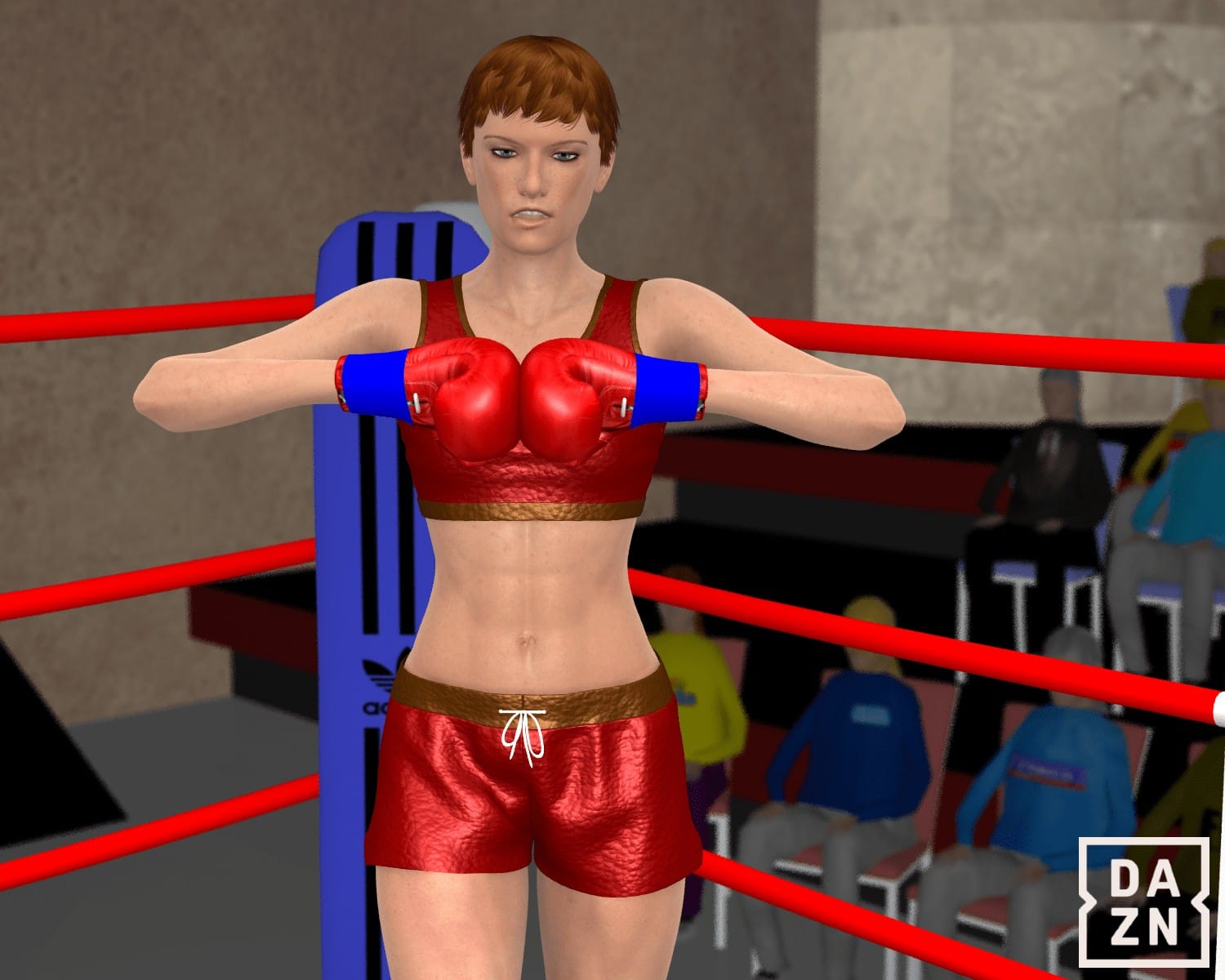 The defending champion is introduced to the crowd in Hamburg, where she gets an excellent reception from the crowd. Given that she is from nearby Bremen, it’s not much of a surprise that she’s a favourite with the locals. She’s also popular because Michaela loves to inflict punishment on her opponents, and that is very much what crowds like to see. She comes into this fight with 10 wins and 2 losses, with all of her wins coming by way of knockout. Both of her losses have been controversial.

She is very much intent on both retaining her lovely German Title and sending a message to the rest of the division. 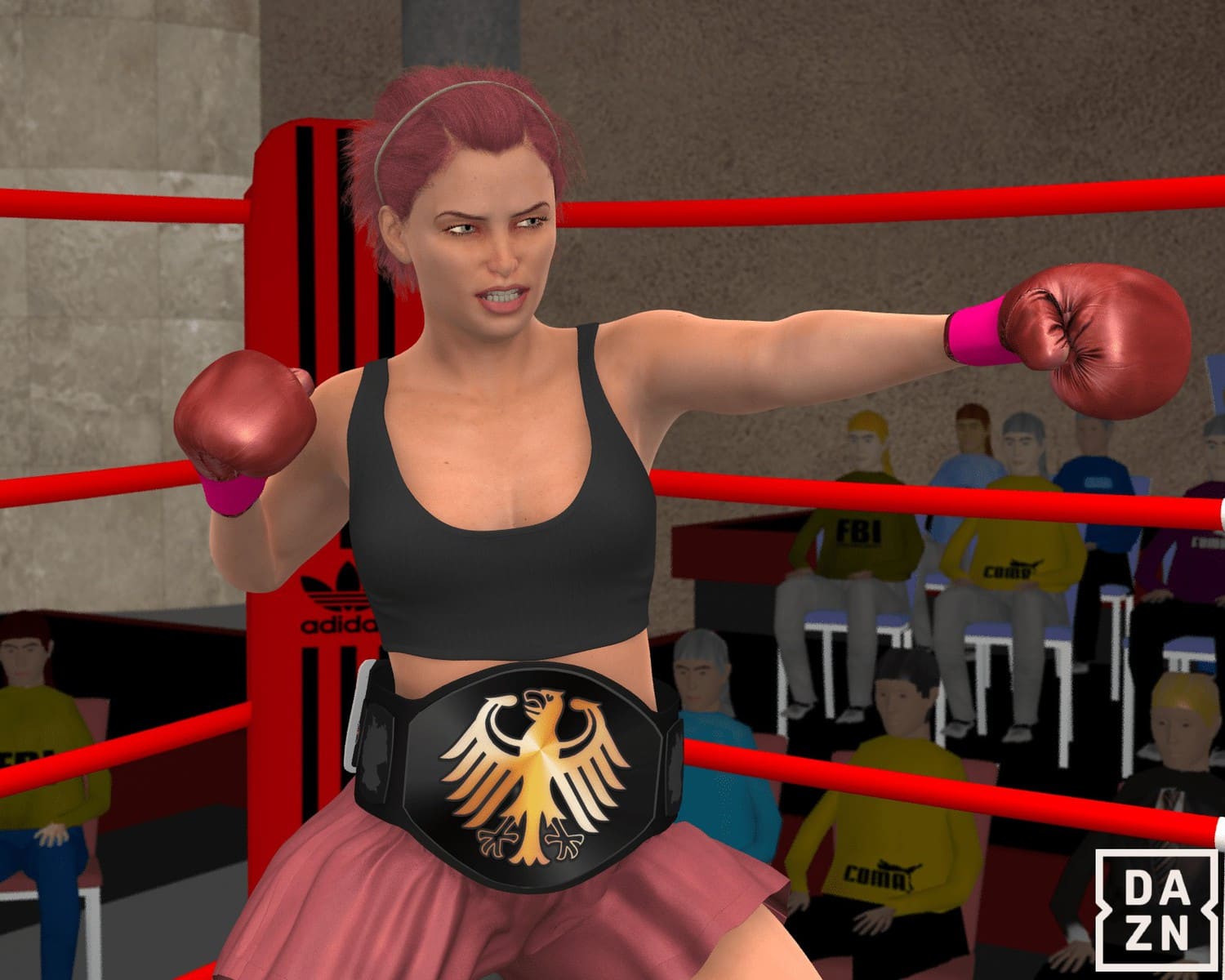 This one goes according to the script early on. Martina tries to keep the slightly portly Michaela at bay with her jab, while Michaela wants to work inside. Martina’s jab lands with decent accuracy, but Michaela isn’t too worried about taking a little leather, only taking the time to try to decode Martina’s movement and timing.

When ‘Queen Kong’ does decide to strike, she lands with far greater authority than Martina can ever hope to manage. The champion sets to intimidate the challenger by letting the girl in red feel her power. Even if she takes a punch or two, if she lands a good one of her own, she can communicate that every blow that Michaela lands will be punishing.

Ultimately she achieves this goal 1:34 into the first round. To this point it had been quite an even round, but as Michaela’s sneaky overhand left crashes into Martina’s jaw, there’s no doubt that the champion can land the more impactful punches. For the remainder of the round, it is all ‘Queen Kong.’ 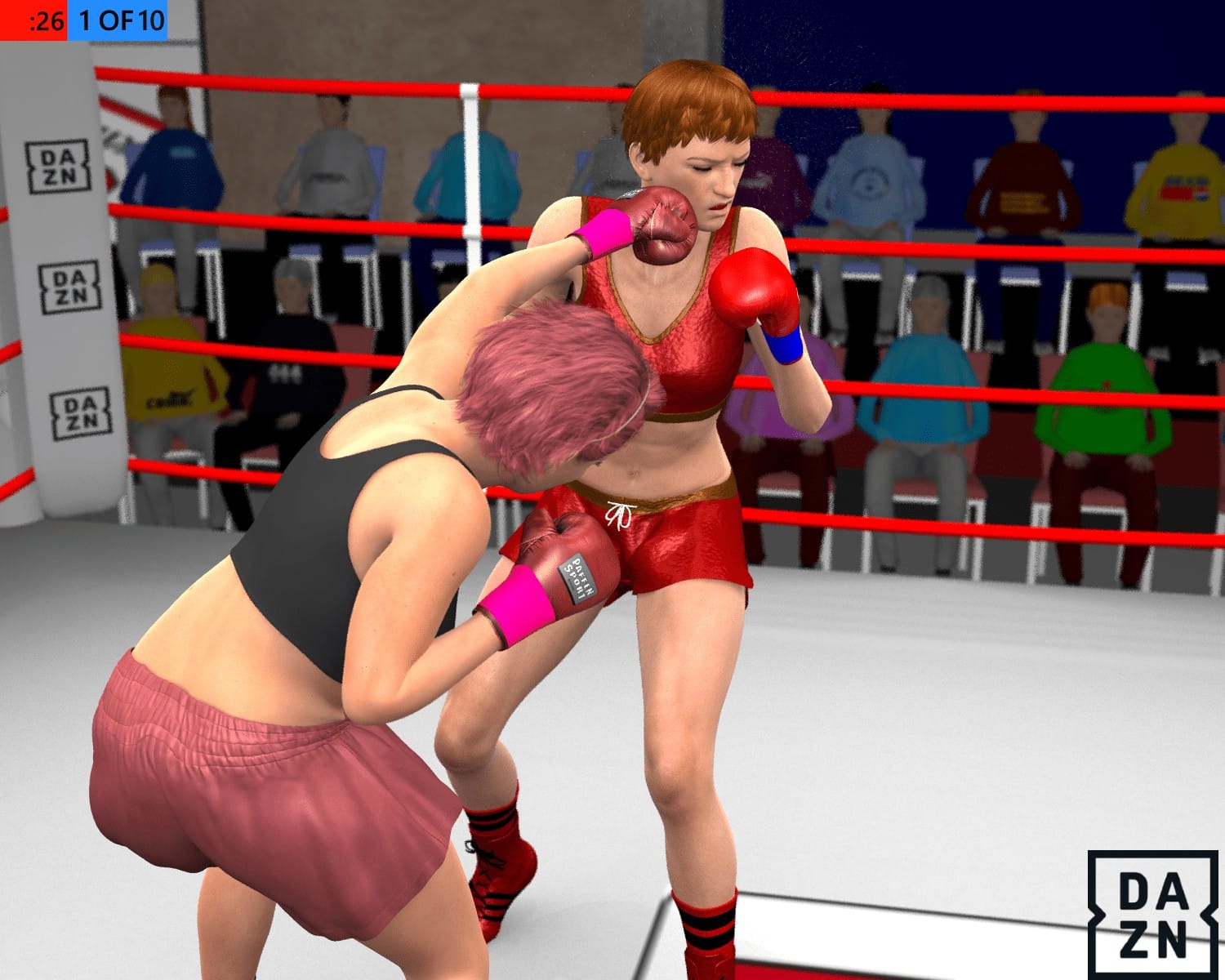 The second round shows a shift in focus as now that Michaela has gained the respect of Martina by throwing punches to the head, she changes focus. Michaela focuses the body, not just with power shots, but with lunging jabs to the midsection. It’s the kind of work that can be punished…but that probably ends up with you trading with Michaela, which doesn’t seem to be on Martina’s agenda.

The red clad fighter does better in this round, and it is arguably even on the judges’ scorecards, but Martina does take a good chunk of punishment to the body. 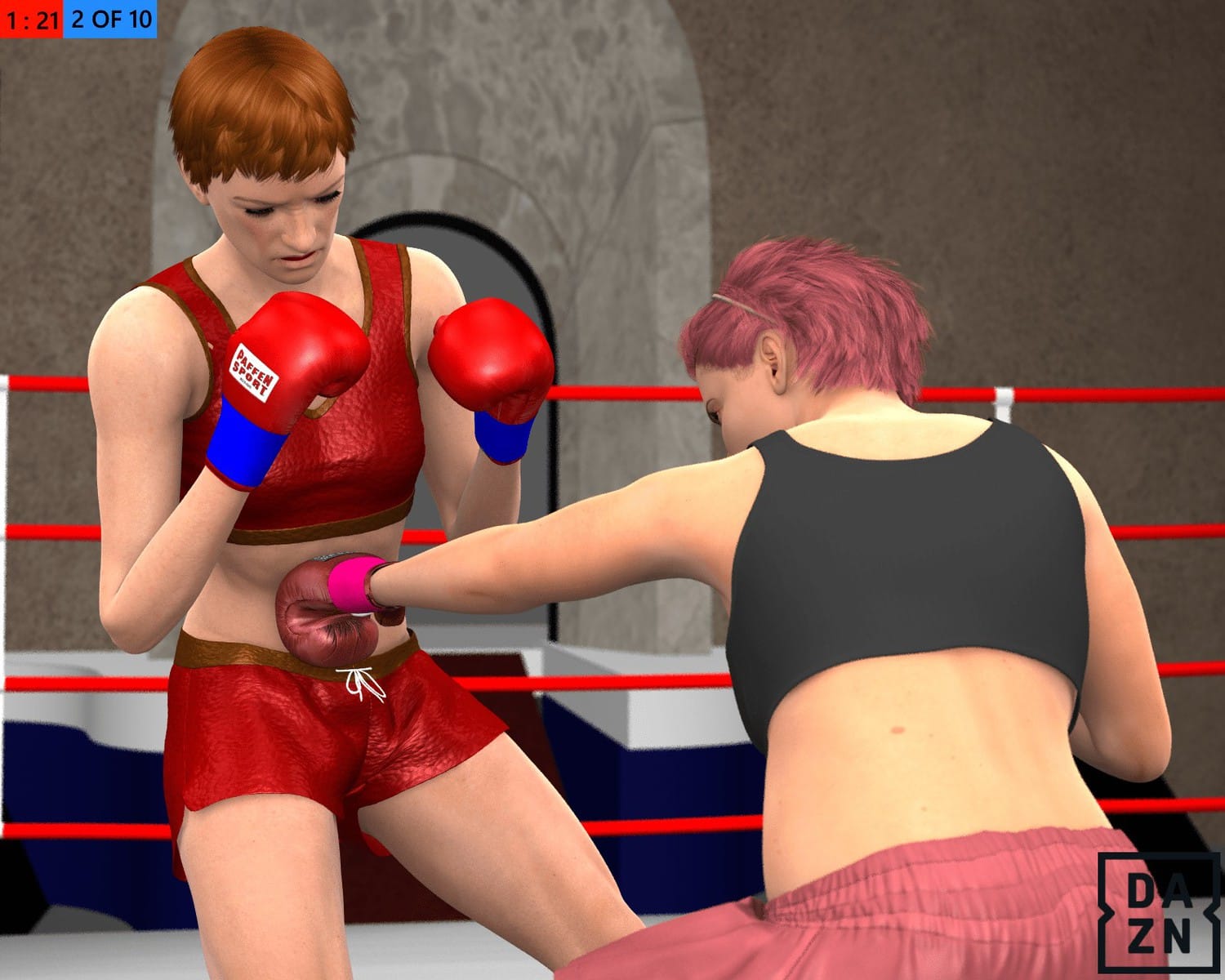 Michaela isn’t happy with an even round, nor is she in letting Martina into the fight. The champion attacks from the off in the 3rd round, landing both to the head in the body. Martina manages to block most of the shots to the head or at least the ones that Michaela does land aren’t the most devastating of the German champion’s punches.

What Martina does suffer, is repeated punishment to the body, clearly already taking their toll on the challenger. Being in the ropes with Michaela isn’t pleasant even when you have the tools to fight back, and it is becoming clear that Martina does not have them. 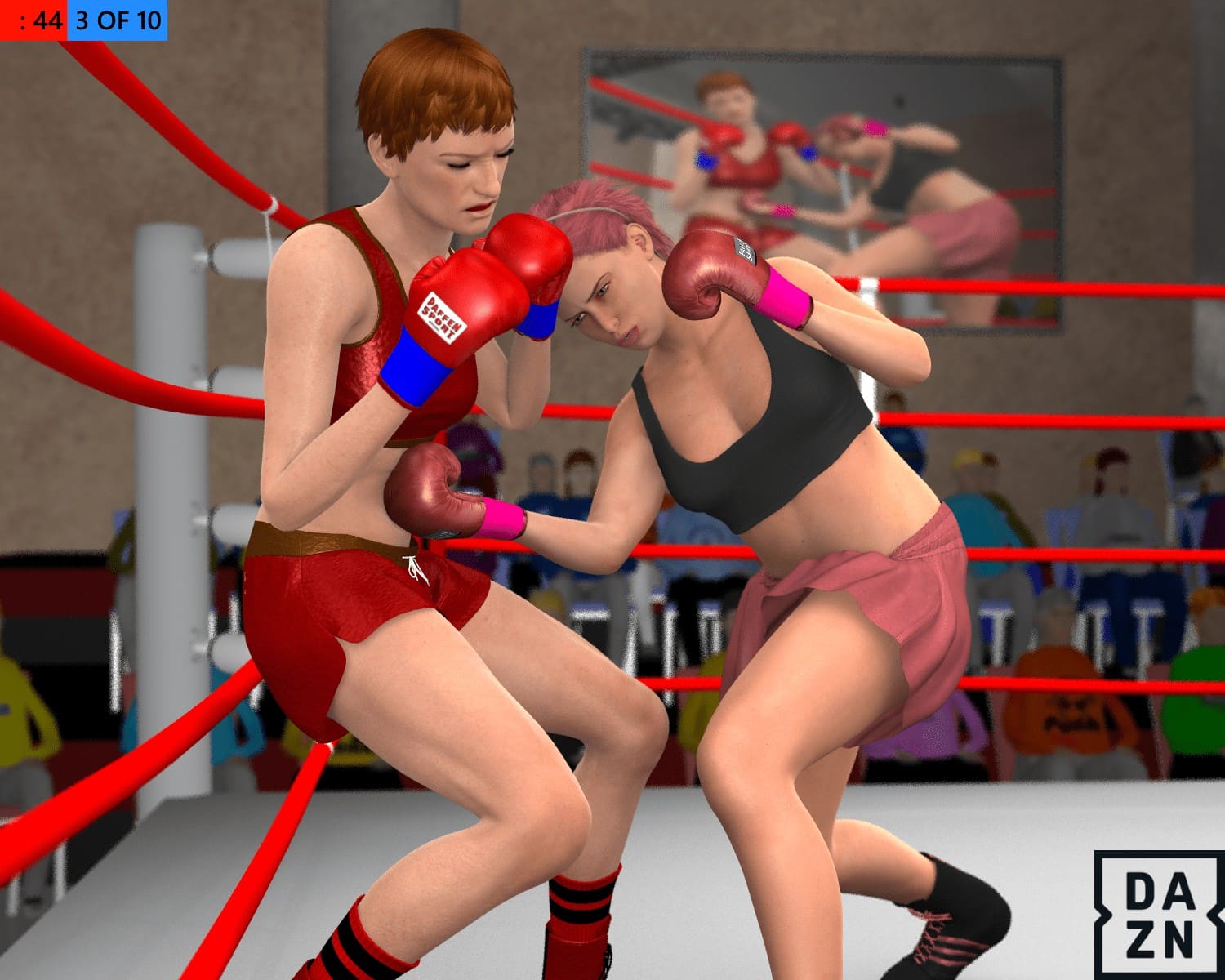 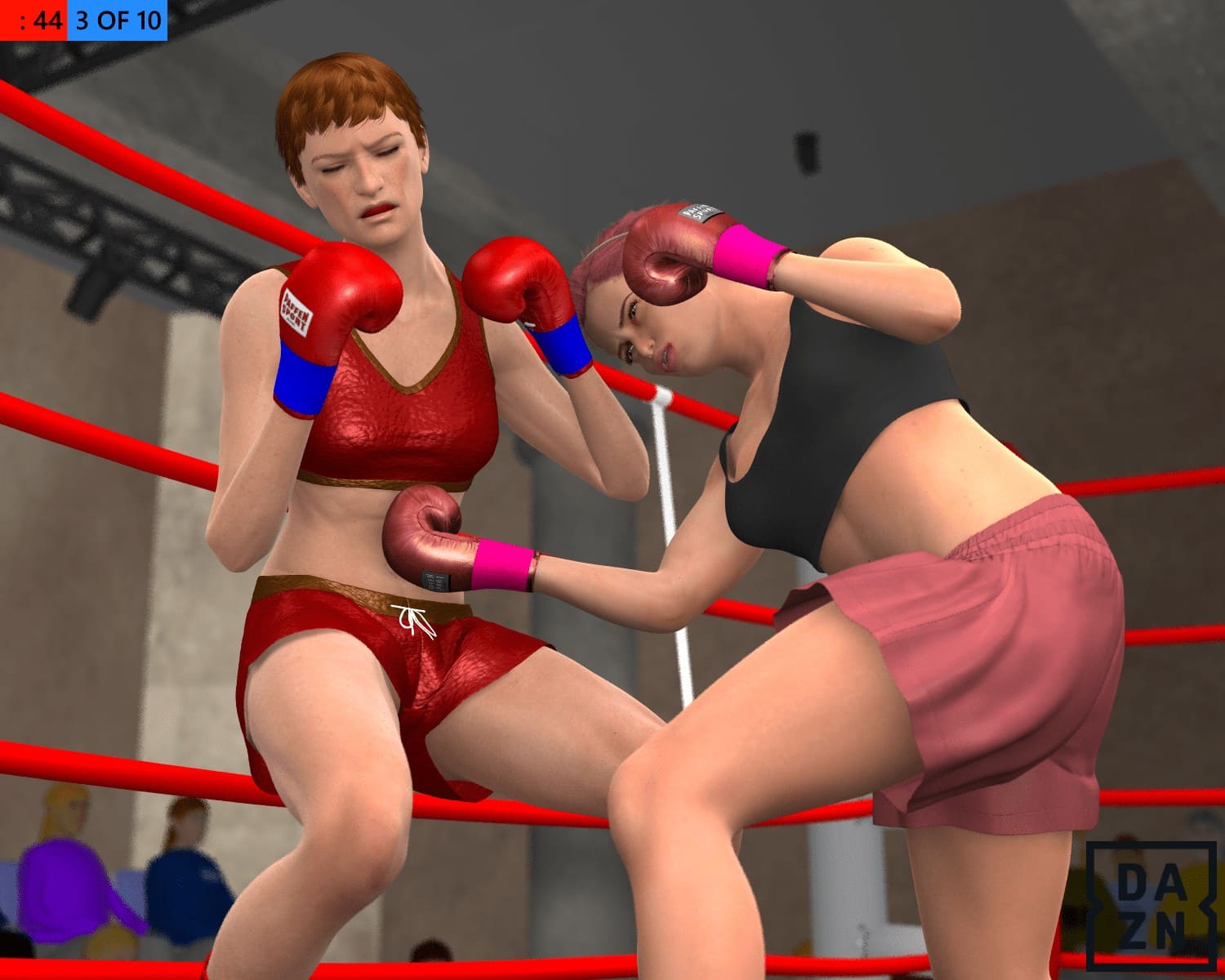 In between rounds, Martina’s coach advises her that she is just going to get run over by the freight train known as Queen Kong if she can’t start landing authoritative punches of her own. Martina make her best effort to do so. Although this does succeed a bit at first, Michaela quickly adjusts to this new Martina. First she starts to move her upper body, becoming a more elusive target.

Though she doesn’t look like the most elusive fighter in history, when she does concentrate on her defence, Michaela is difficult to hit, as she proves at :29 seconds into the 4th round, when Michaela avoids a left hand with some nice defensive movements. 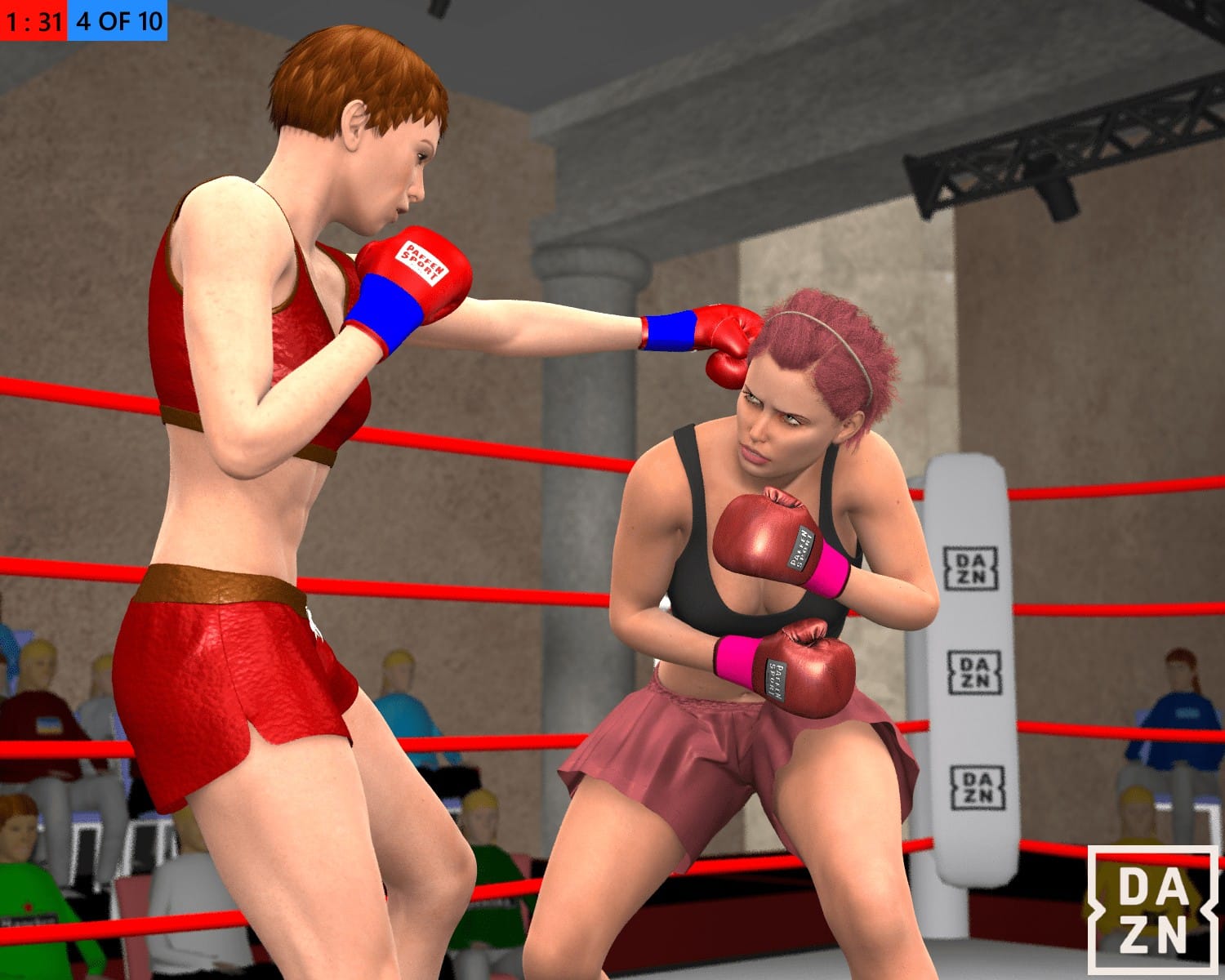 Martina’s offensive output generally falters by the end of the 4th round, not having found the success that she desired. The champion senses the flagging confidence of the challenger and goes on the attack. She again focuses on the body of the challenger, continuing to work over the girl in red. Michaela repeatedly gets Martina along the ropes or into the corner and then is able to go to work. As the 5th round progresses, it is clear that Martina is flagging. 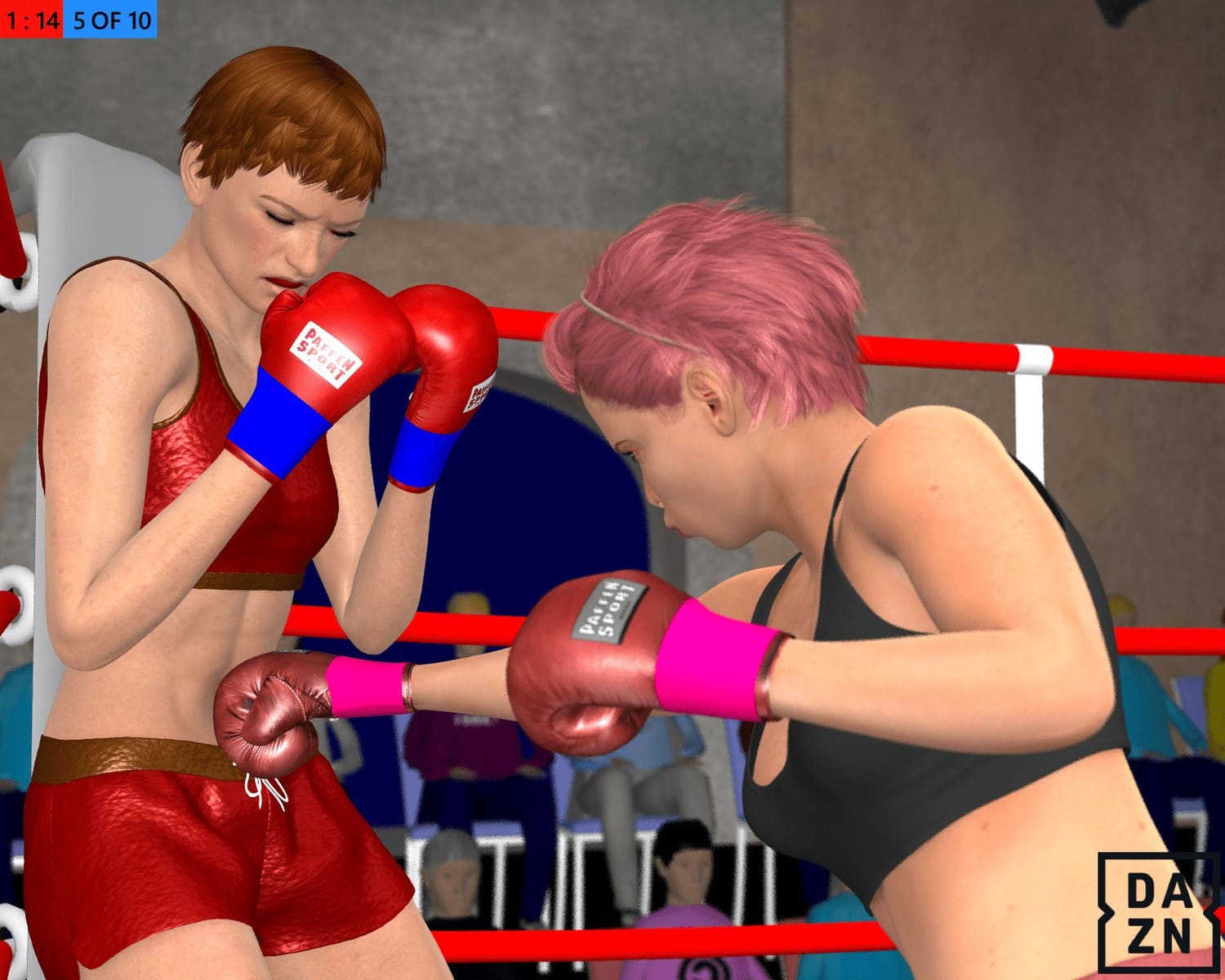 After taking a beating in the corner, Martina tries one more time to change the tide of the fight, but instead gets caught with a massive right hand that jerks her upper body and head backwards. The biggest punch from Michaela so far in the fight, and it looks like the champion might be on her way to victory… 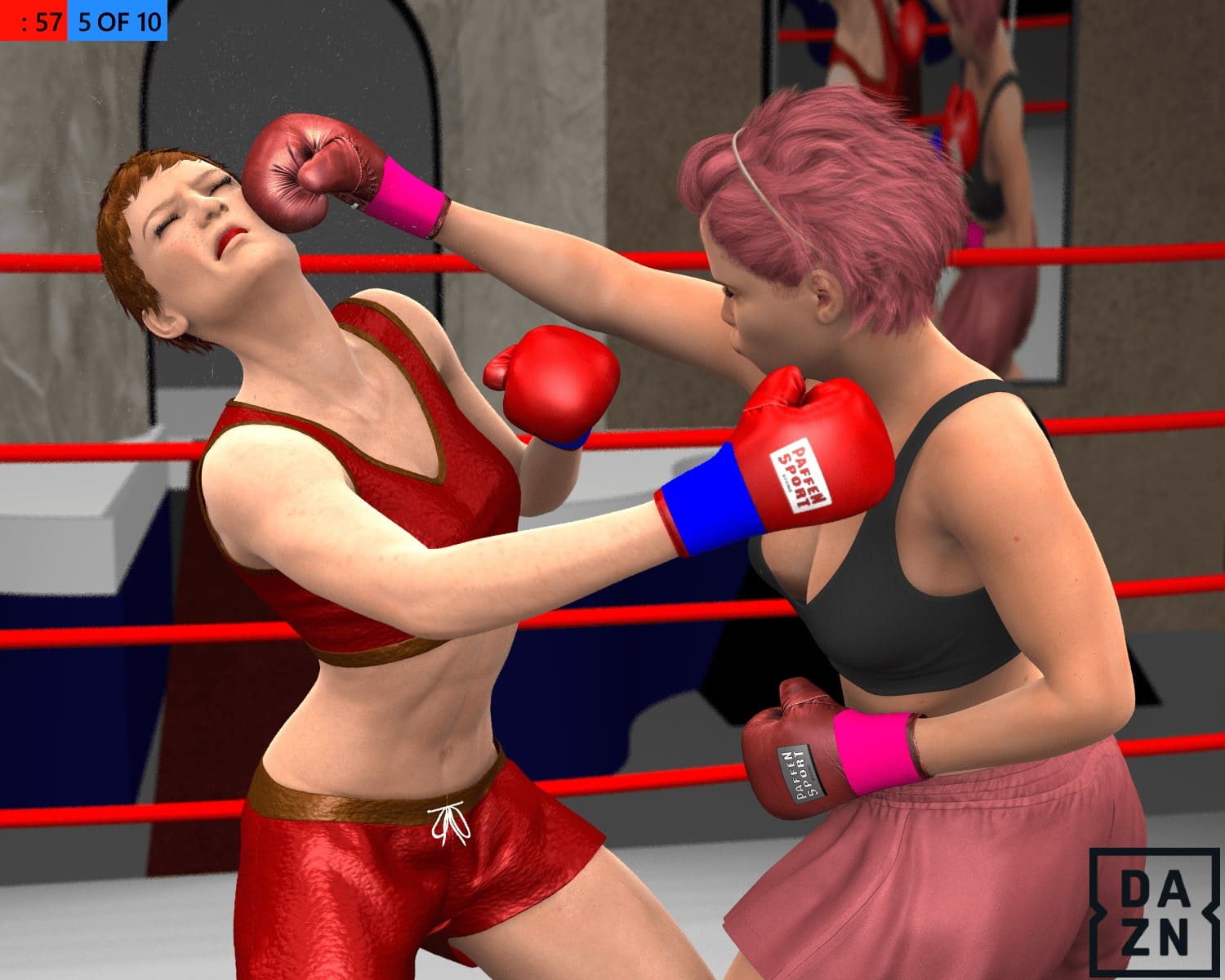 Martina turns her back on Michaela and walks away from her opponent. Michaela winds up to throw another right hand, but holds back, sensing that Martina has had enough. Her instinct is proven correct as the referee races in to protect a fighter that has clearly thrown in the towel.

The referee confirms the stoppage moments later as Martina had no desire to continue, knowing that she was outclassed and was likely to have ended up splayed out on the canvas if the fight continued much longer. Some times, even with a title on the line, discretion can be the better part of valor. 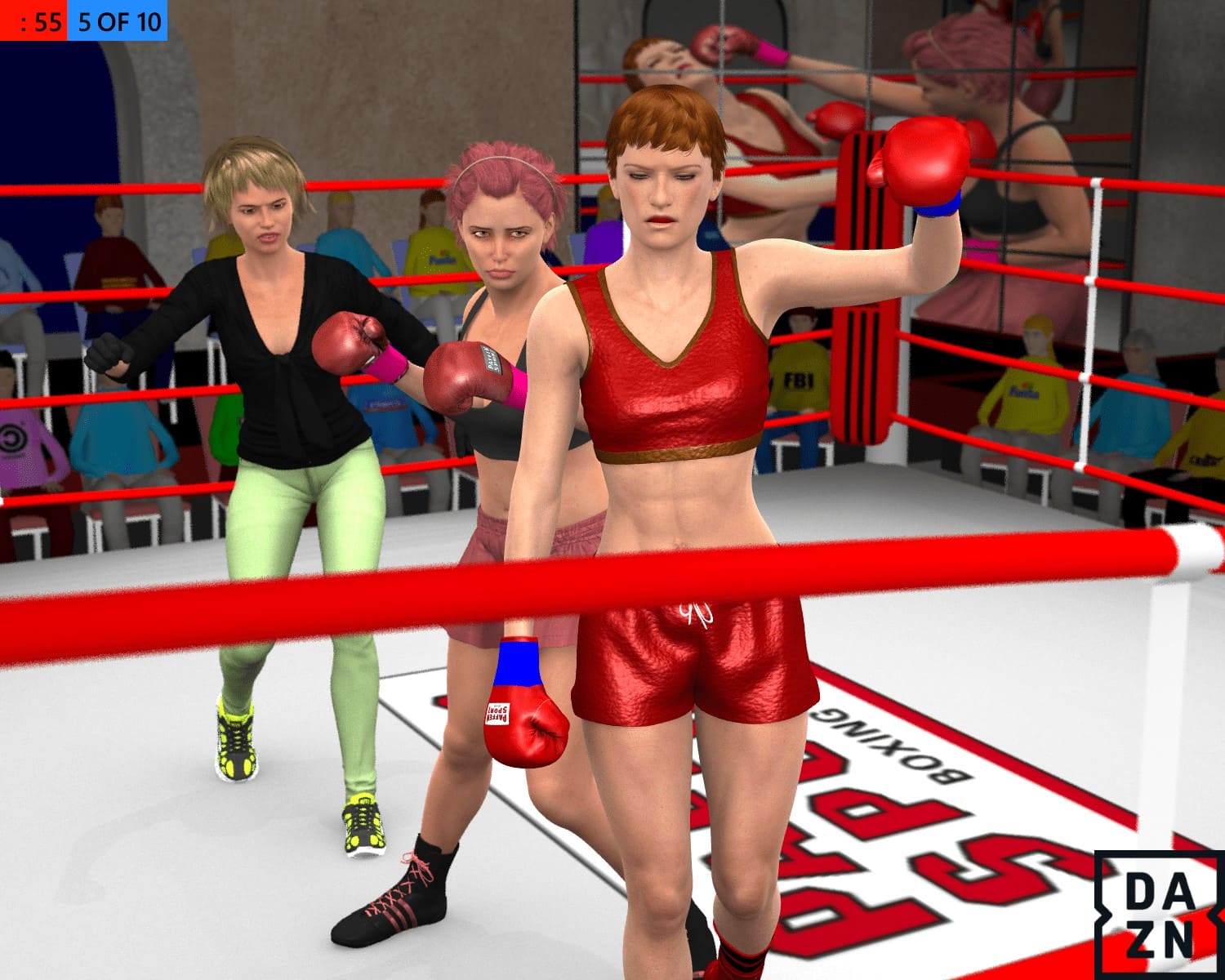 A few moments later the result is confirmed. The winner by Technical Knockout in the 5th round and still the German Featherweight champion is Michaela Sommer! 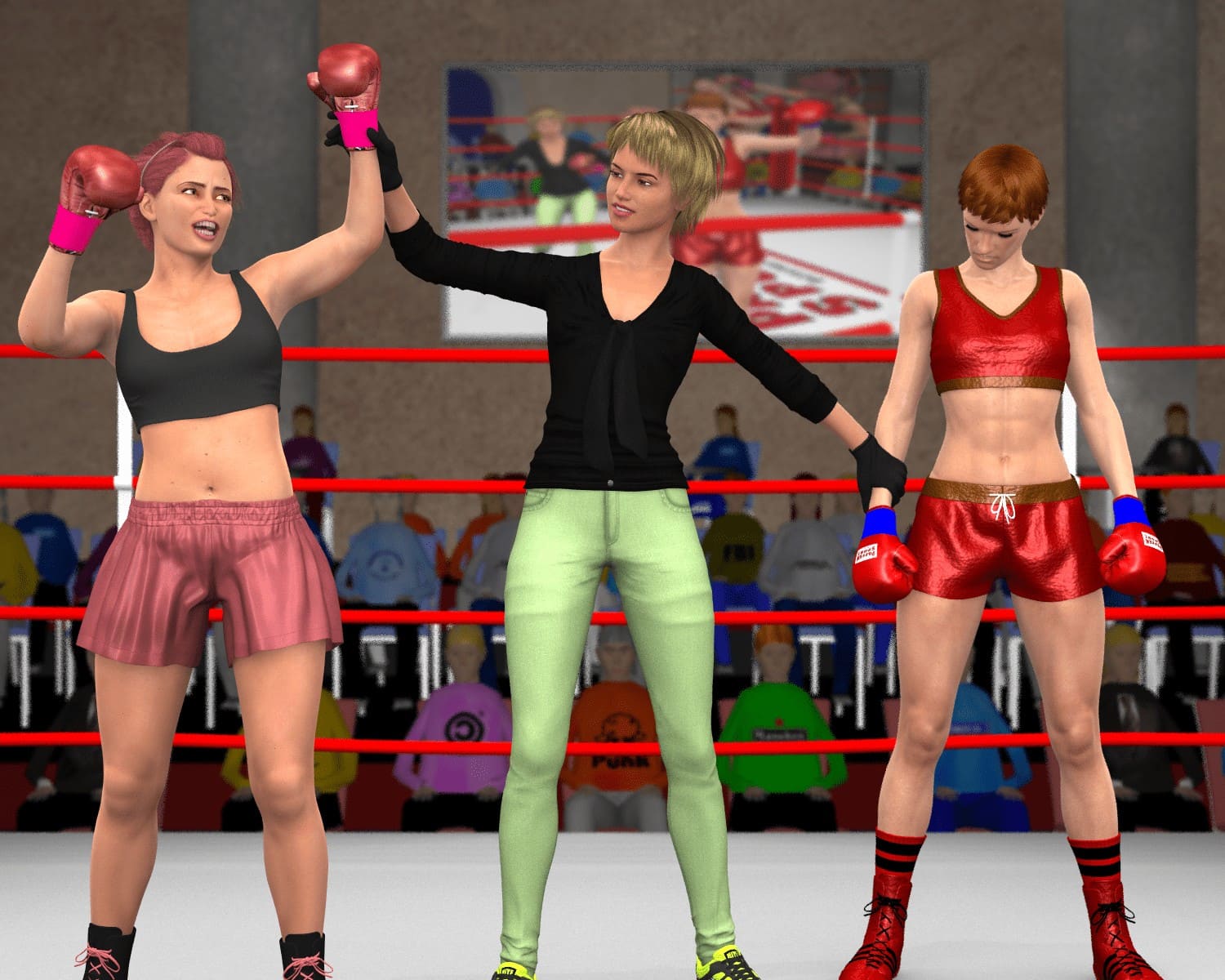 After the match Michaela is contacted by one of the higher ups at Final Bell boxing, where they reiterate their desire to get Michaela a top level opponent, though she might have to be willing to travel to do so. Queen Kong says that she isn’t afraid of anyone in the division, though most of the division should be afraid of her. 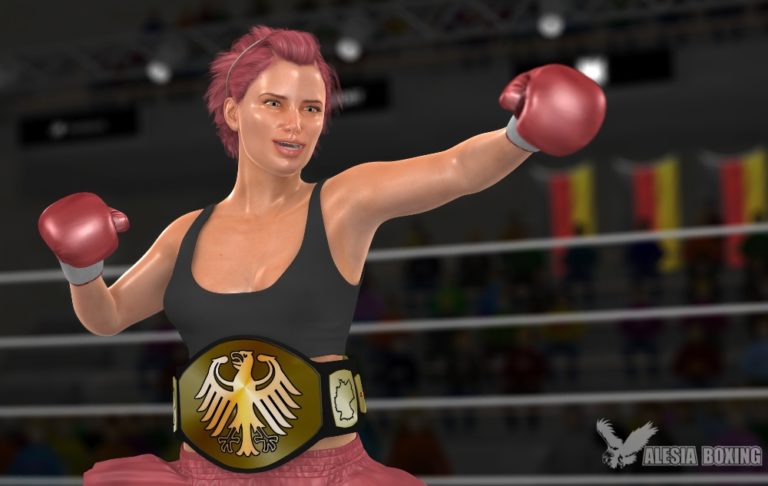 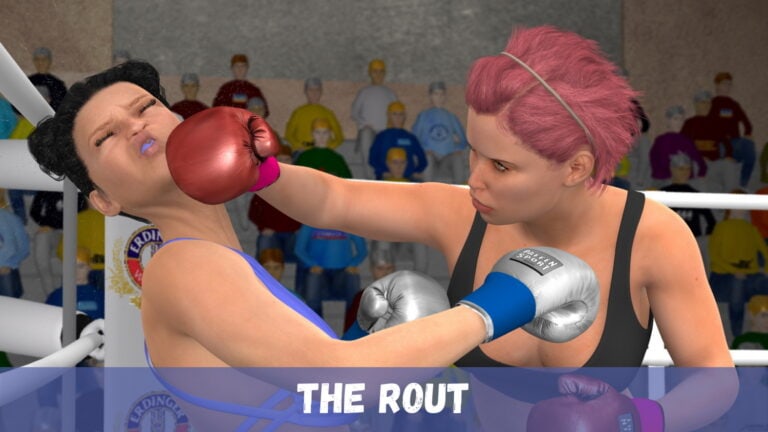