To Jab or Not to Jab

The two fighters come out of their corners quickly to begin the 3rd round. With this being an 8 round fight, there is a bit of urgency to both fighters as they know that there isn’t too much time to stage a dramatic comeback if they fall behind.

Encouraged by Thomas, Kasandra stays at her preferred distance, but generally doesn’t fire off too many jabs, instead trying to read Leanne to see how the black gloved fighter will react. The Englishwoman doesn’t seem to mind this new wrinkle though, and she even starts to use her own jab to unsettle the taller Kasandra.

However, Kasandra shows that she doesn’t need to use her own jab as a rangefinder as she pops Leanne with a quick right hand after Leanne’s halfhearted jab misses.

Laila Ali: “Kasandra Sobieski answers back here early in the 3rd round as she changes things up by not throwing the jab in the early going and instead landing a lead right hand. Sometimes, it’s about the punches that you don’t throw and Leanne Storm is going to have to have to respect that Kasandra will throw a lead right when the opportunity allows. It’s mixing things up and changing the tempo a bit in this fight.”

Leanne thinks: Not a big fan of having to use my jab like this…

Kasandra thinks: Move your head or I’ll move it for you.

Emma thinks: Beware of giving Leanne the fight that she wants… 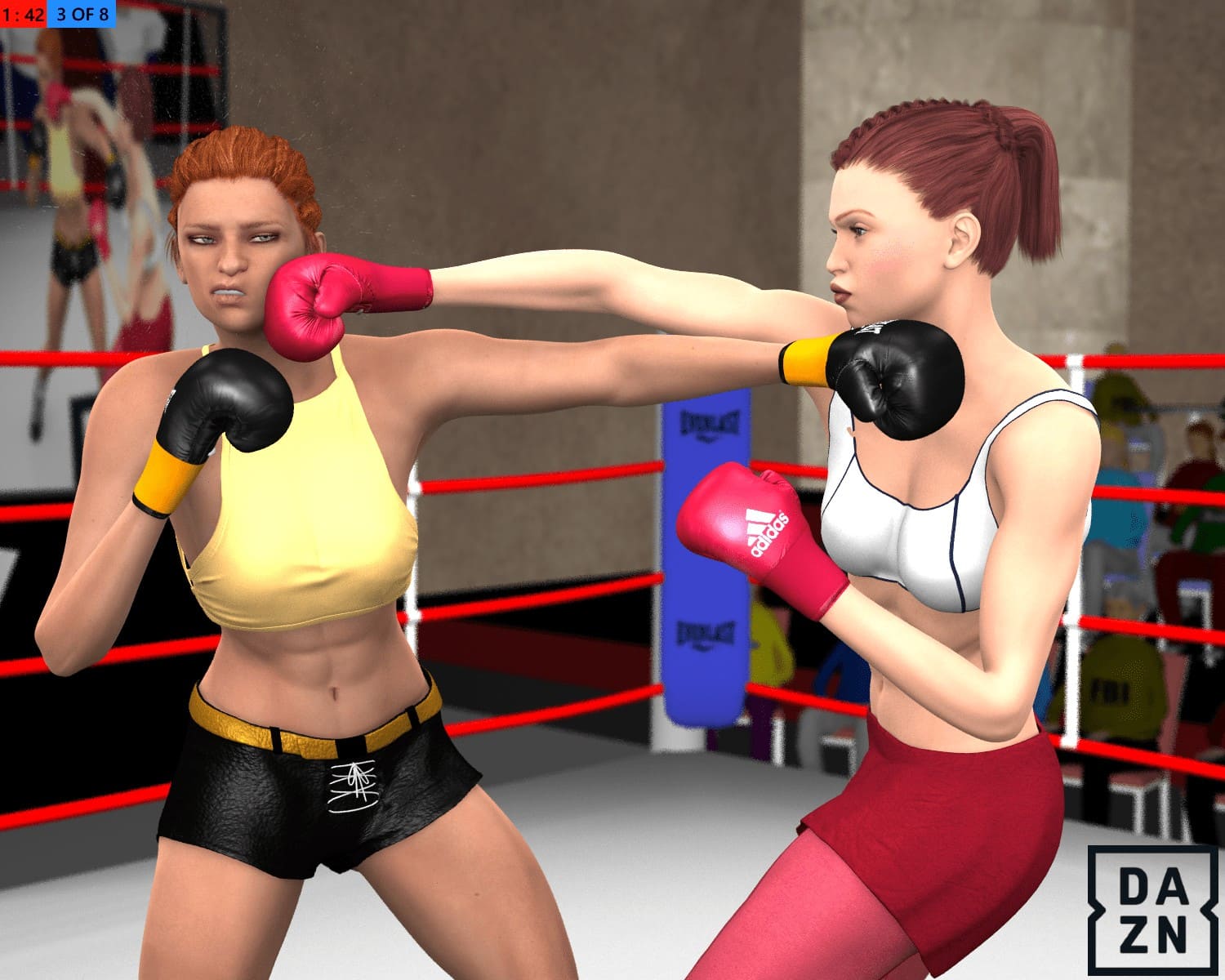 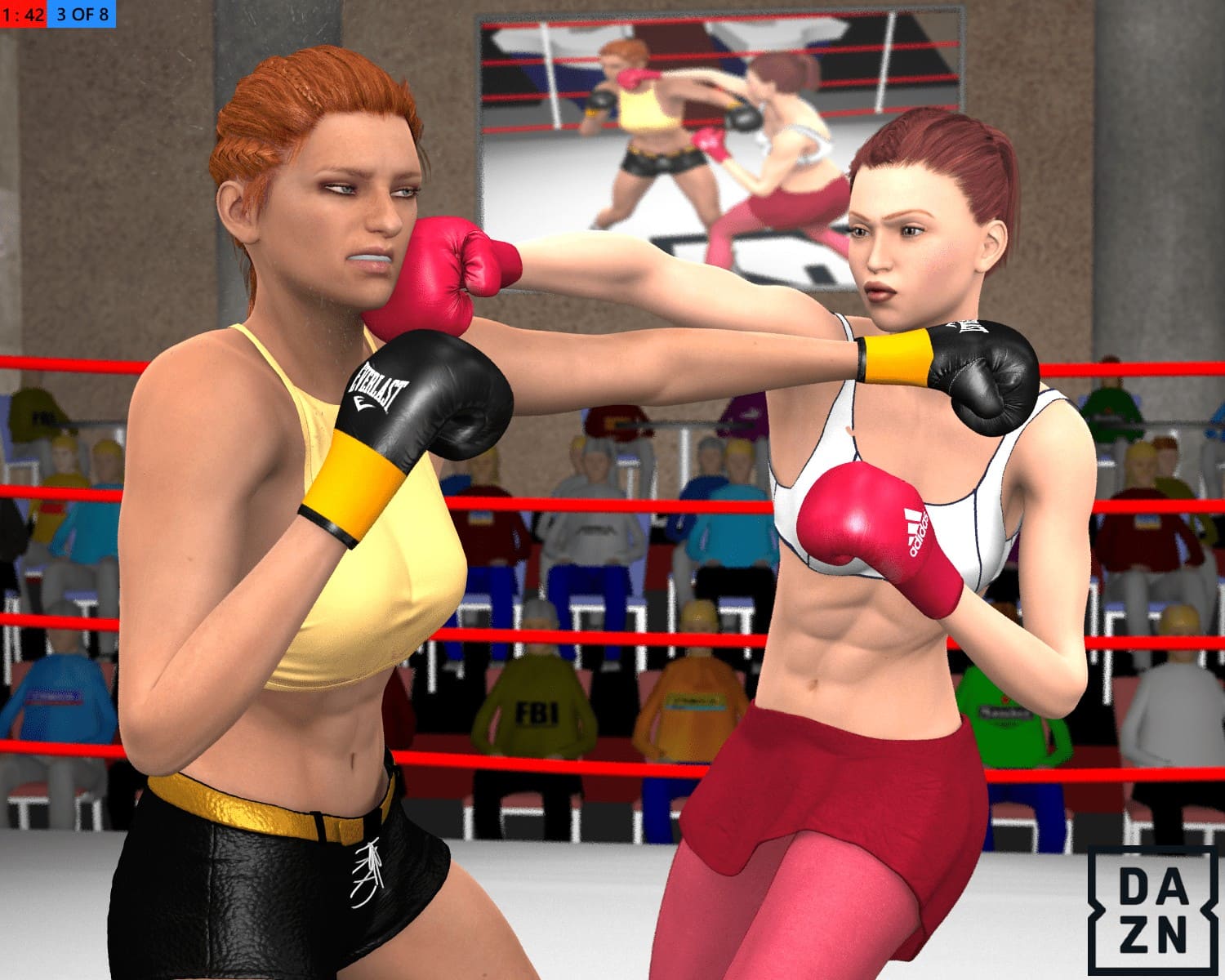 Leanne shakes her head for a moment, as if to say ‘no, that didn’t hurt me.’ That seems to concerns Kasandra for a moment who thought that her right hand was a pretty good punch. Those kind of mindgames have their place in the ring. Who knows if Leanne was actually hurt by the punch, only Leanne herself knows.

But the main impact at the moment is that it makes Kasandra a bit more hesitant to want to engage. Leanne doesn’t need another hint, but instead of just firing randomly, she goes to a rarely used weapon, but one that Kasandra used well against her earlier in the fight.

Leanne flurries to make Kasandra back away, but as she does, Leanne closes the distance with an almost leaping jab, that snaps Kasandra’s head back.  Turnabout, it turns out, is fair play.

Laila Ali: “It’s the power jab from Leanne Storm as she gets Kasandra retreating and makes her pay with a straight left that I don’t think anyone was expecting. Leanne may have come in with a reputation of a scrappy fighter, but she’s showing great tactical thinking in this one to stay even with Kasandra Sobieski. 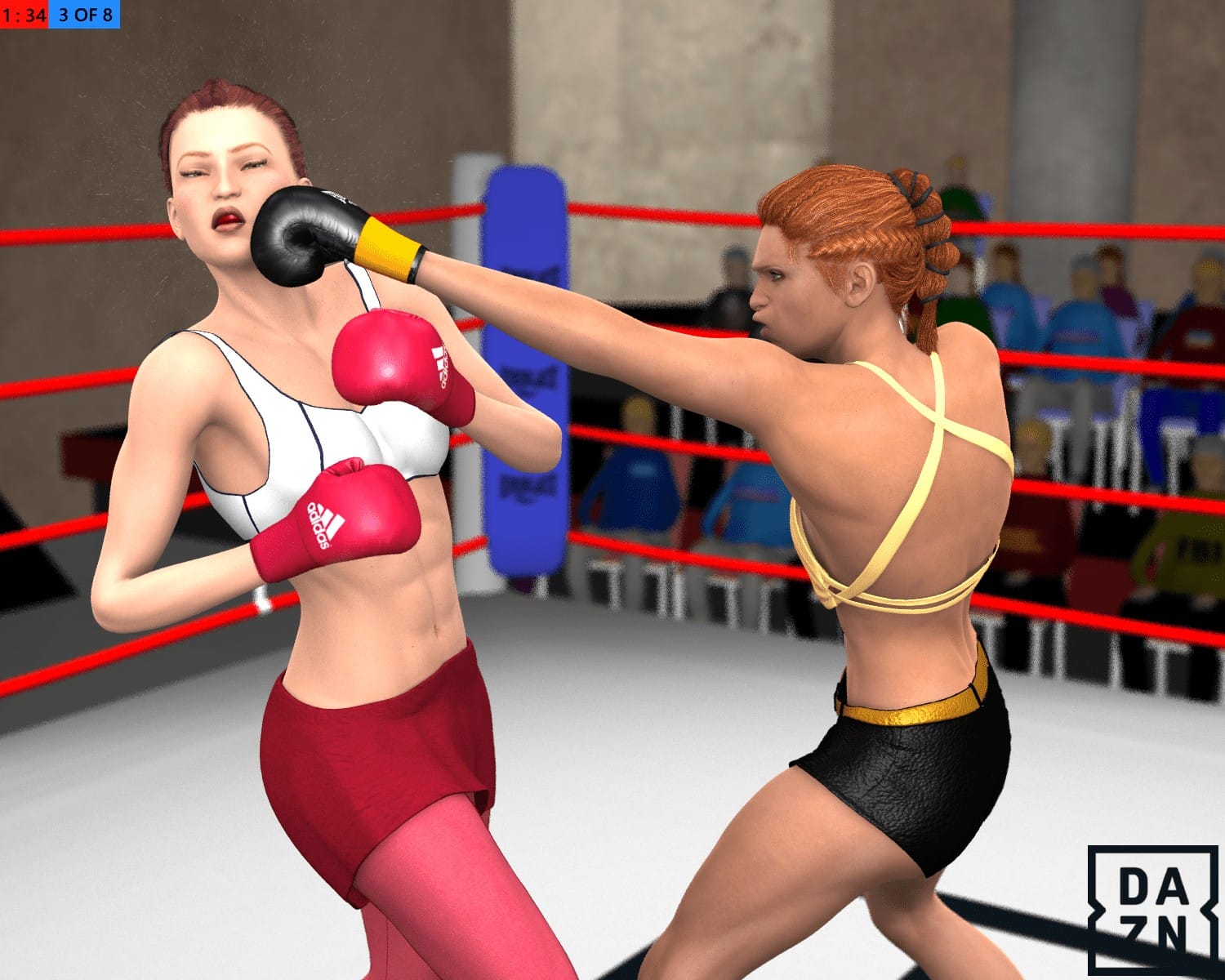 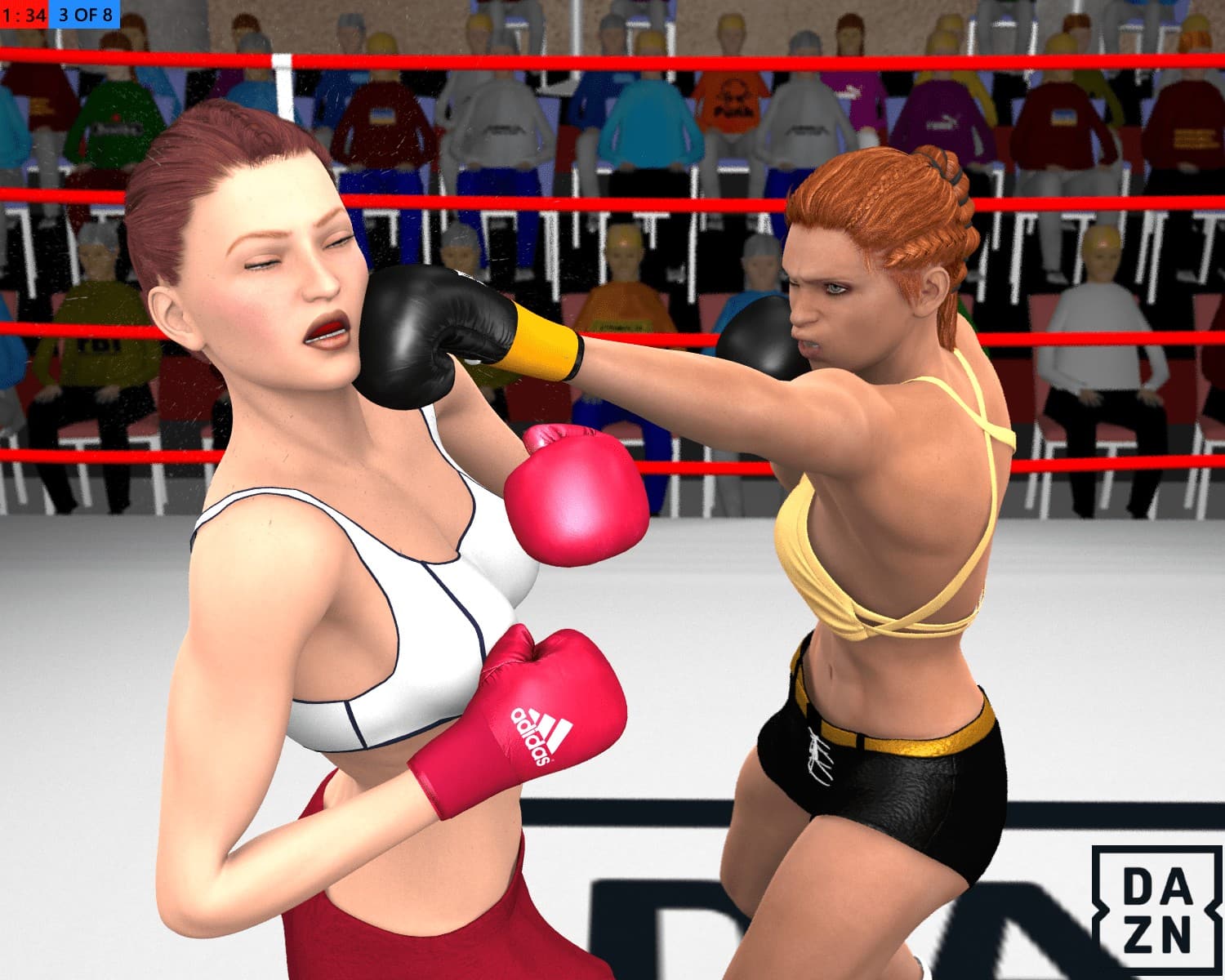 The instruction from her coach comes at exactly the right time, as it gives the Polish fighter a sense of purpose. She returns a bit to the jab, using it sparingly but effectively, and also using it as a tool to open up her right hand, which finds some purchase as well.

As Leanne tries to react to this newly aggressive Kasandra, she tries to get low and puts her effort into landing a counterpunch. Kasandra leads with a jab, which Leanne reacts to by trying to throw an overhand right. But Kasandra withdraws her jab and pivots into a left hook, which sends Leanne’s right hand wide of the target and also opens up a crushing angle for the Adidas branded leather to sail home.

Laila: “That’s the biggest punch of the night from Sobieski who baited Leanne with the jab before saying ‘surprise! It’s a left hook!’ Very nice boxing IQ from the Polish fighter, who learns that being first also creates the opportunity to have your opponent make a mistake.”

Emma thinks: Kasandra isn’t a knockout artist, but that one had to sting. 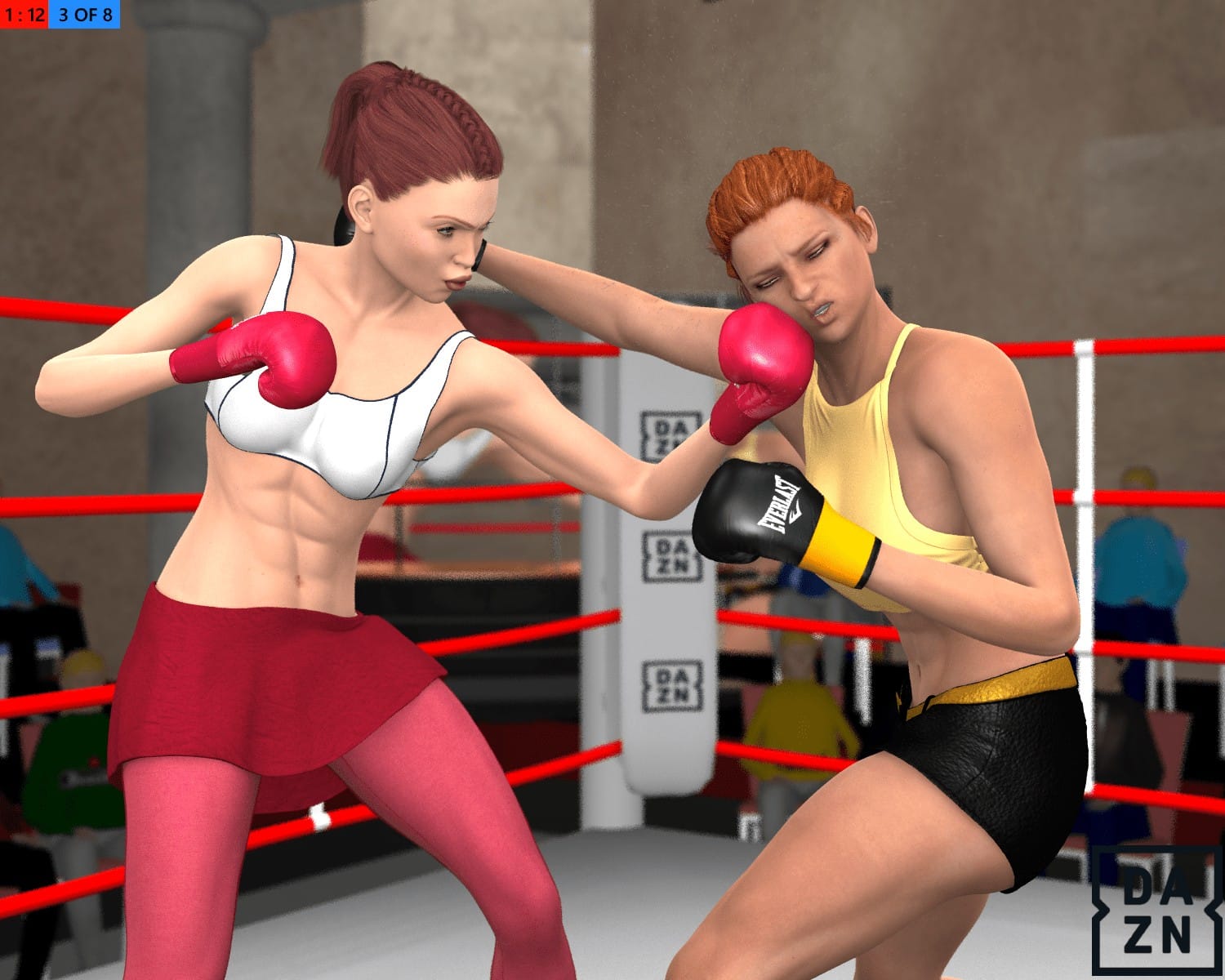 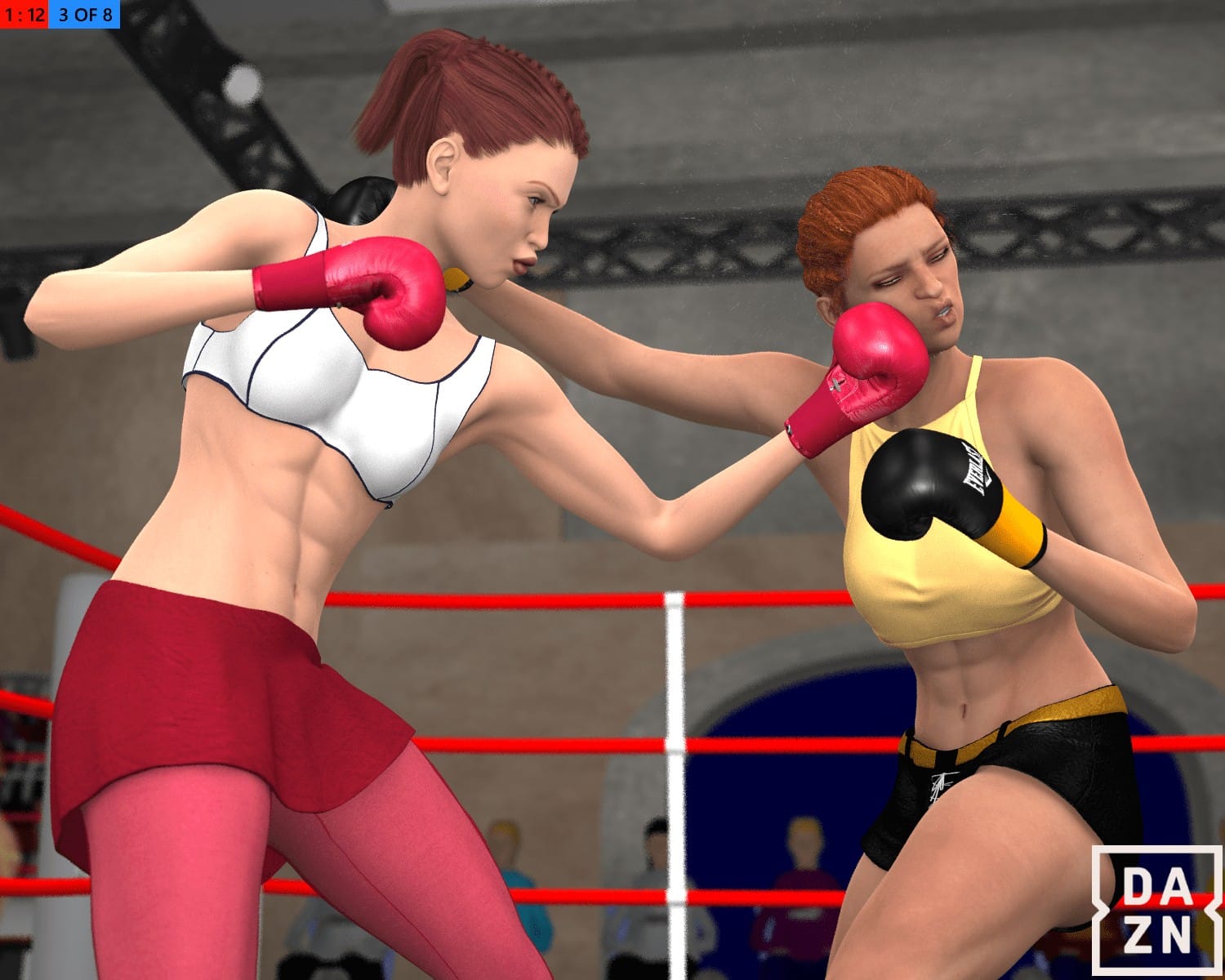 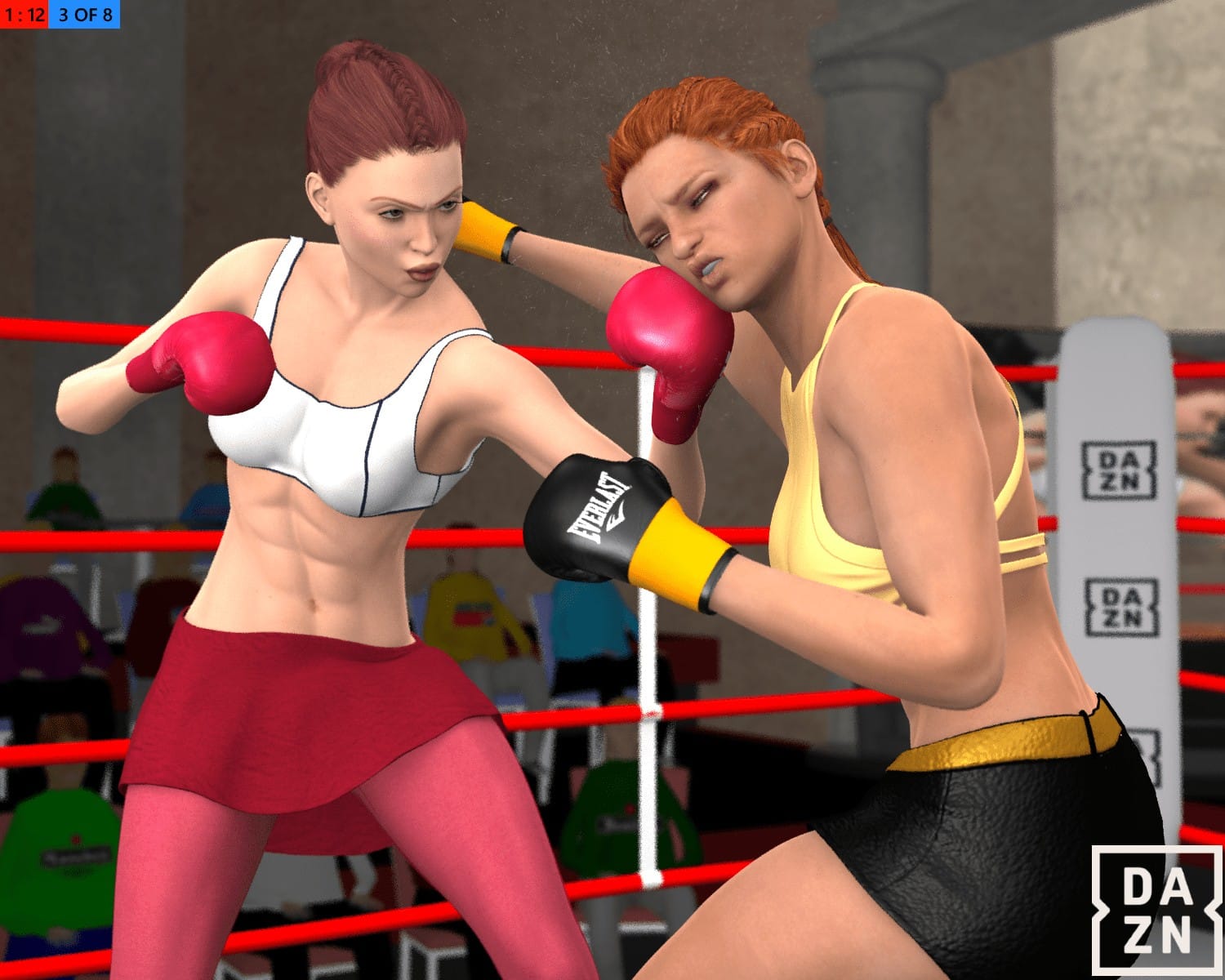 But after receiving the biggest punch of the fight, Leanne doesn’t seem to react much. In fact she lands a jab to the body of Kasandra as if to say – ‘that was just one punch, there’s still a fight going on here.’ Kasandra’s confidence is high at the moment, she’s been able to hit Leanne pretty consistently throughout the fight so far.

Leanne thinks: Going to try something a bit different here.

Leanne retreats, and seemingly makes a mistake as she ends up in the corner. Kasandra pursues her redheaded rival, intent on adding to her hurt. She jabs, which makes Leanne lower her body to get her head out of range, before Kasandra steps in with a right hand. But Leanne steps in at the same time, throwing a short, powerful left hand that digs deep into Kasandra’s midsection.

Laila: “A stunning reversal as Kasandra Sobieski gets caught with a massive punch to the midsection! The sound that punch made had that audience at ringside groaning in sympathy!” 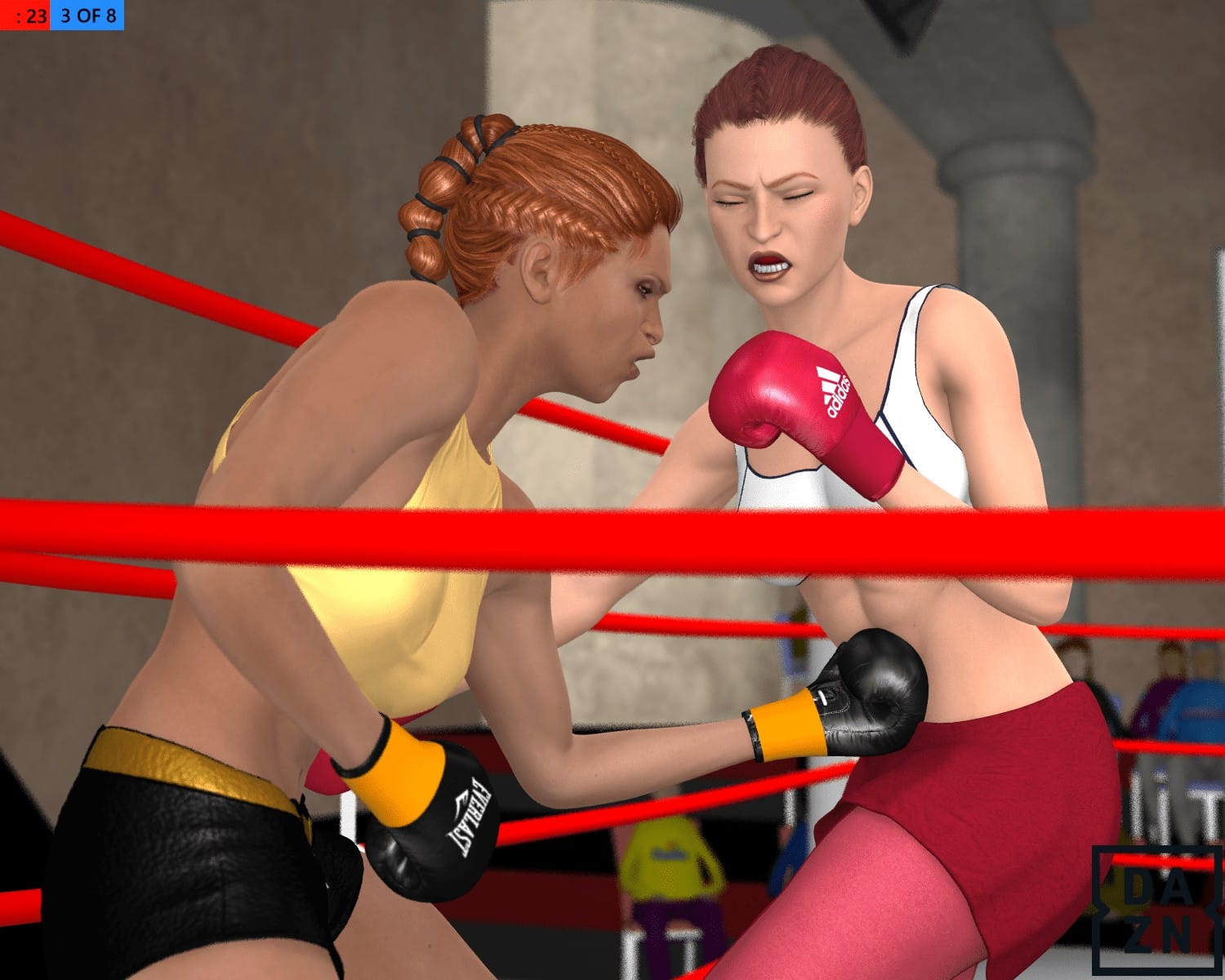 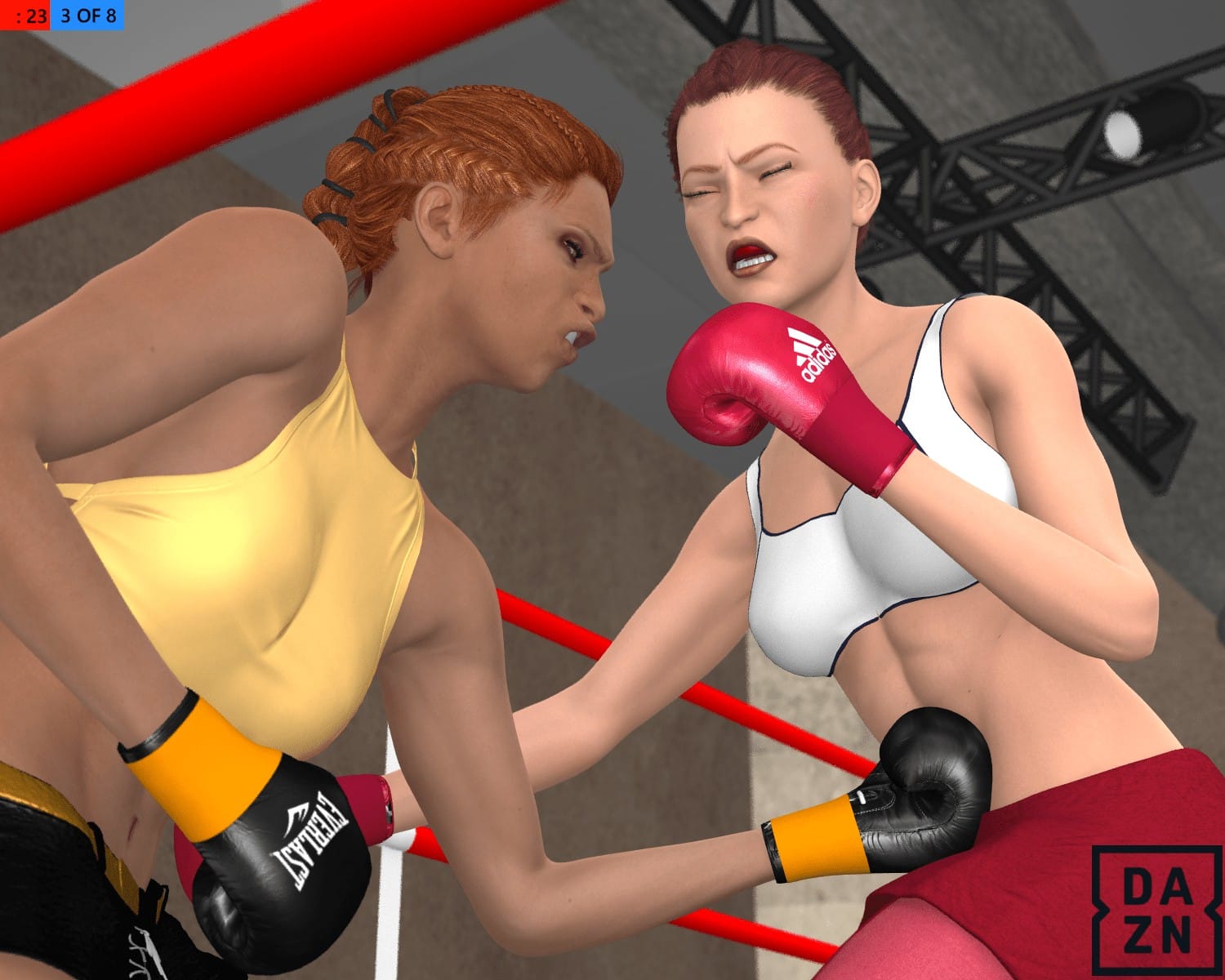 Kasandra thinks: Was that a boxing glove or a knife that hit me? Oh my god that hurt.

Leanne thinks: It’s a bit crude, but judging by the sound that she made, I think that hurt her bad.

Stricken, Kasandra nearly turns her back as she retreats from the corner. She’s never been hurt like that from a punch, and it makes her freeze. Leanne can see a reeling opponent when she sees one, but doesn’t get too wild. Leanne attacks the body, making Kasandra bend down to protect her midsection, so Leanne goes upstairs. She fakes low with a right hand, making Kasandra’s hands go down, before turning her motion into an uppercut that catches Kasandra just short of flush.

Emma thinks: This is…. trouble. 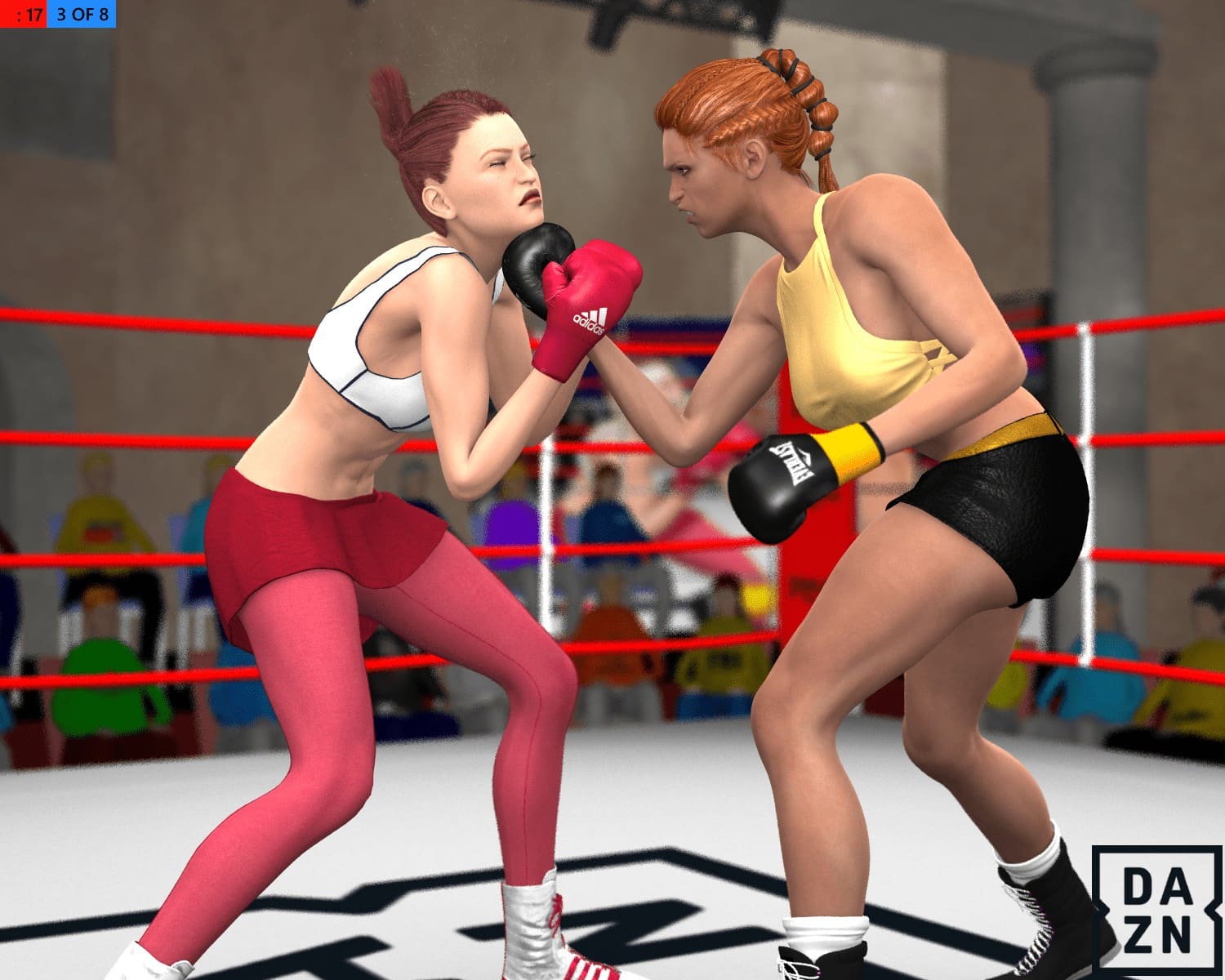 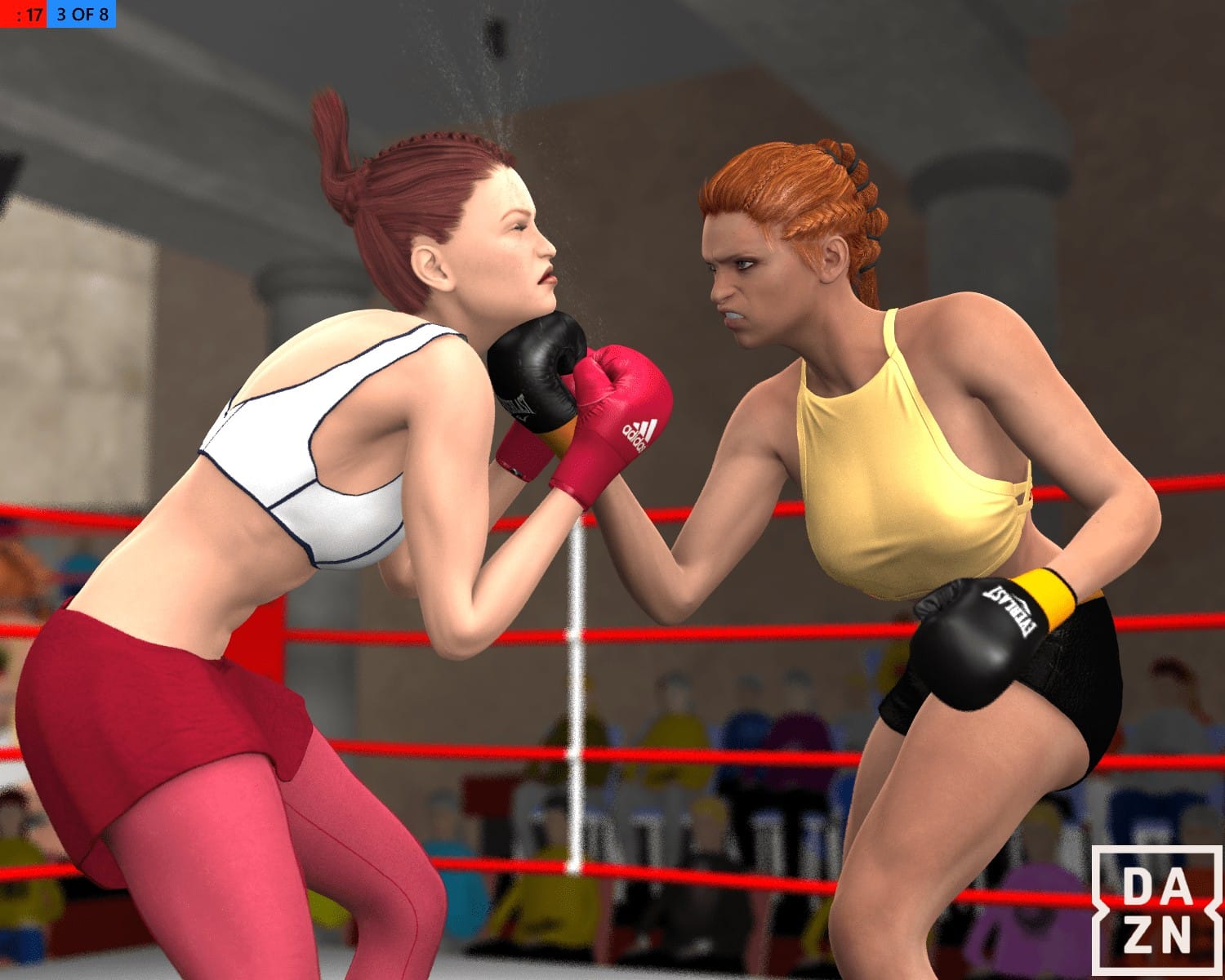 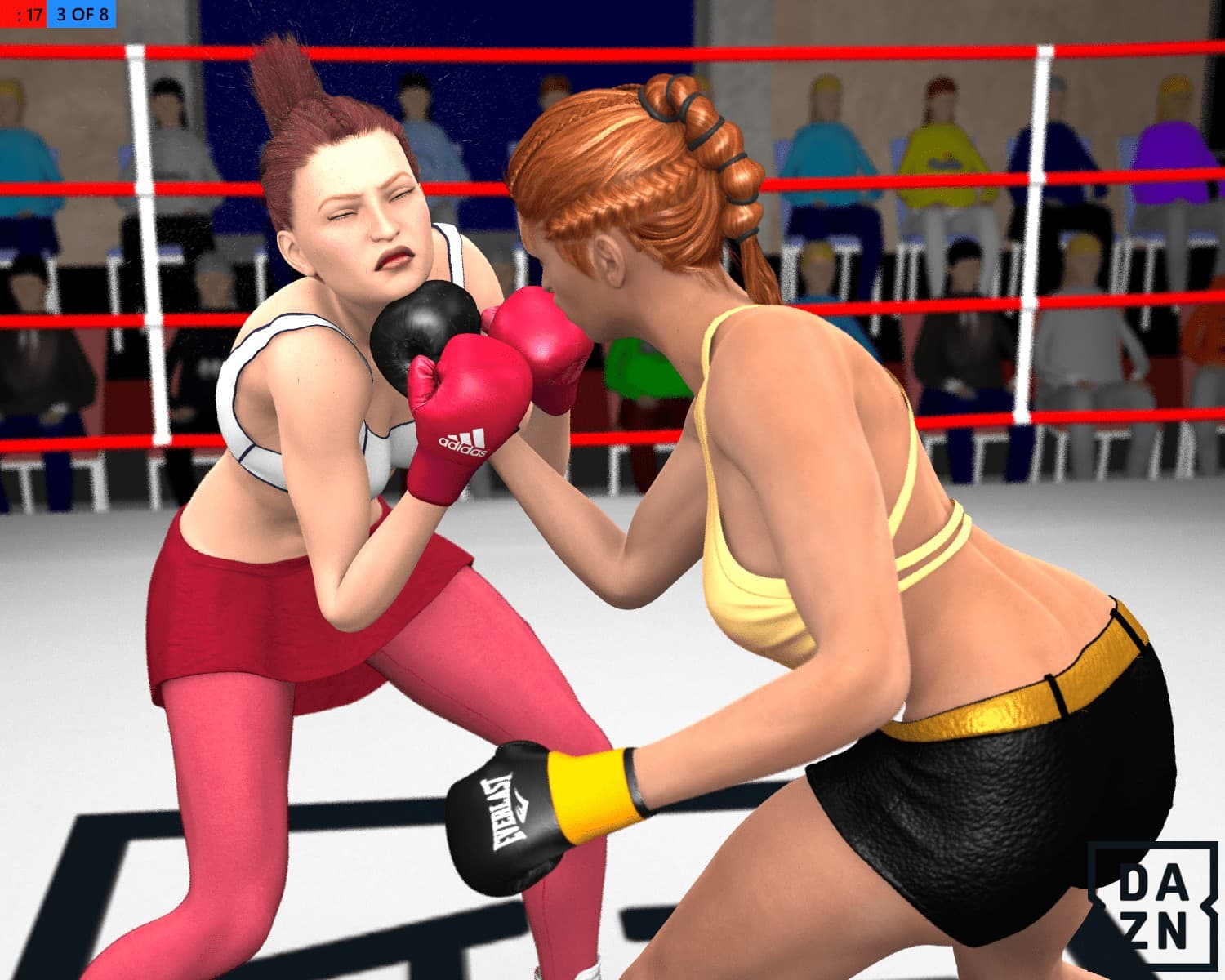 The hurting Polish fighter now doesn’t even think of firing back, she only thinks about trying to prevent more pain from black leather. It’s fortunate for her that the round is mostly over. The patient Leanne displays good composure, as she gets Kasandra to raise her guard, before going low with a punishing right hook to the body.

Laila: “The crowd is getting a bit antsy as the local favourite is in trouble here. Sobieski has never been down in her career, but she looks a bit lost here as Leanne batters her around the ring.” 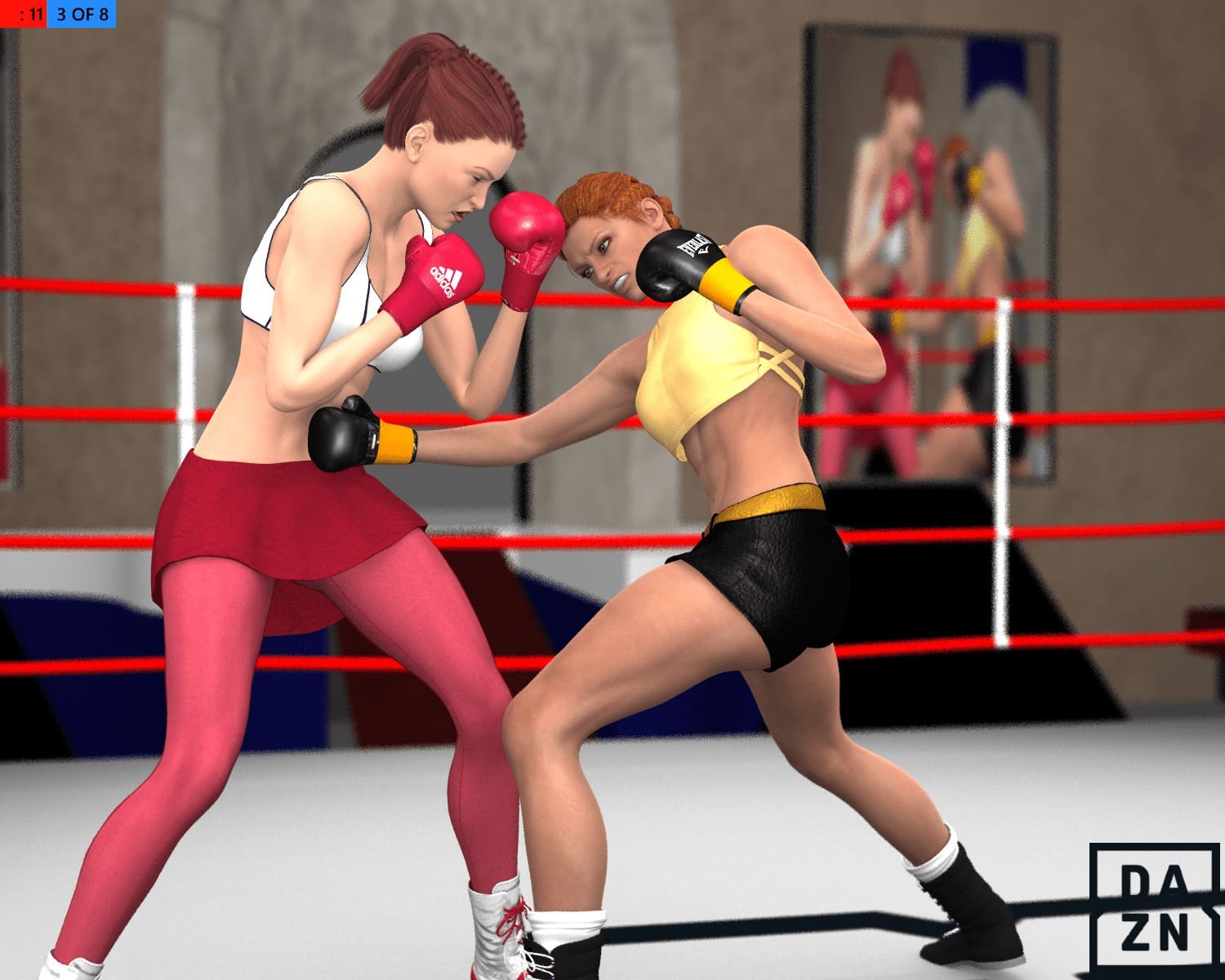 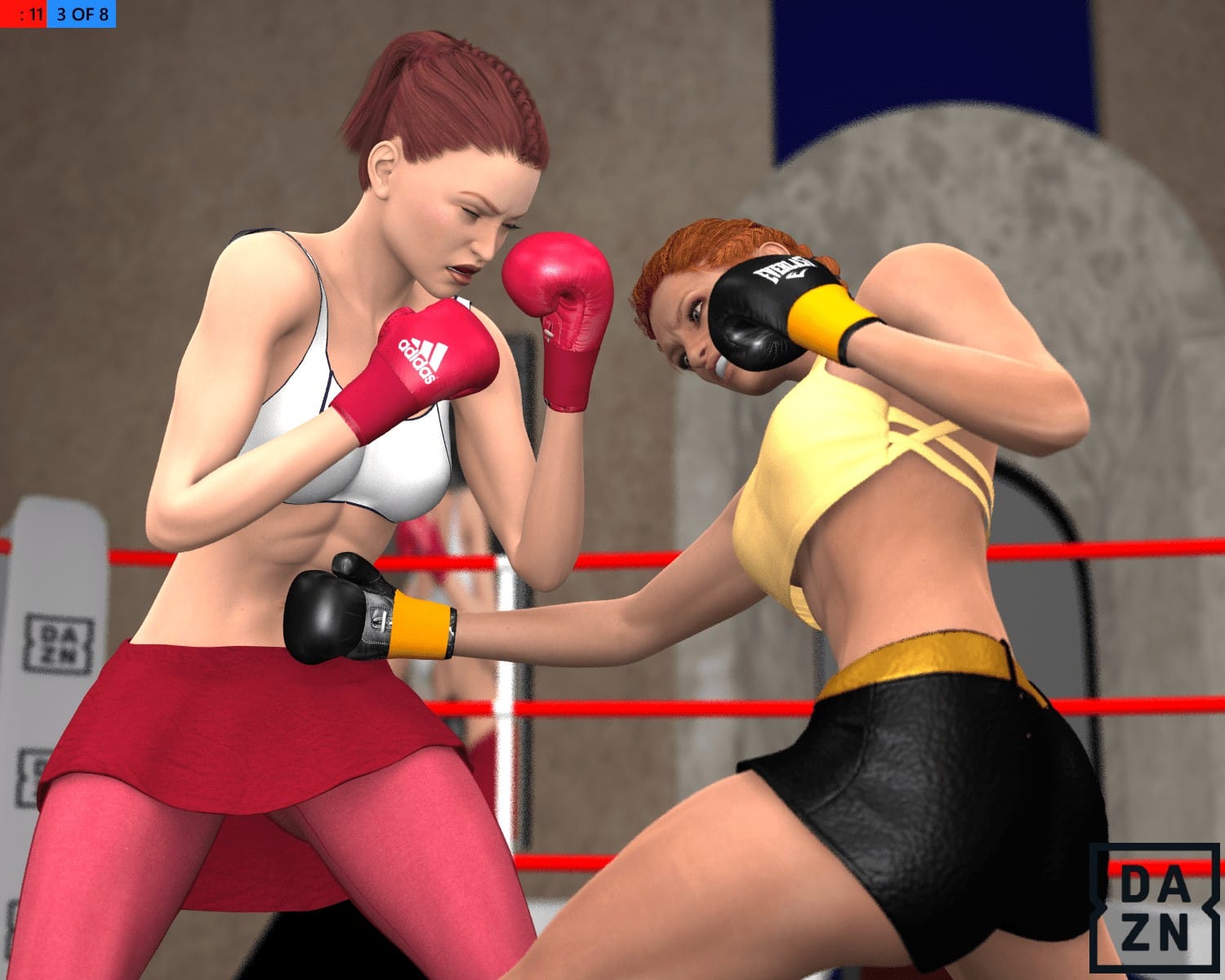 The ten second warning goes off, which seems to give a bit of life to Kasandra, who knows that she only needs to survive ten more seconds. She has trouble keeping her guard up, but she gets her legs moving enough that Leanne can do little but wing wild shots that fall short. By the time that Leanne is able to get Kasandra going towards the ropes, the bell is about to ring to end the round.

But that’s when Leanne splits Kasandra’s weak guard with a big right hand. 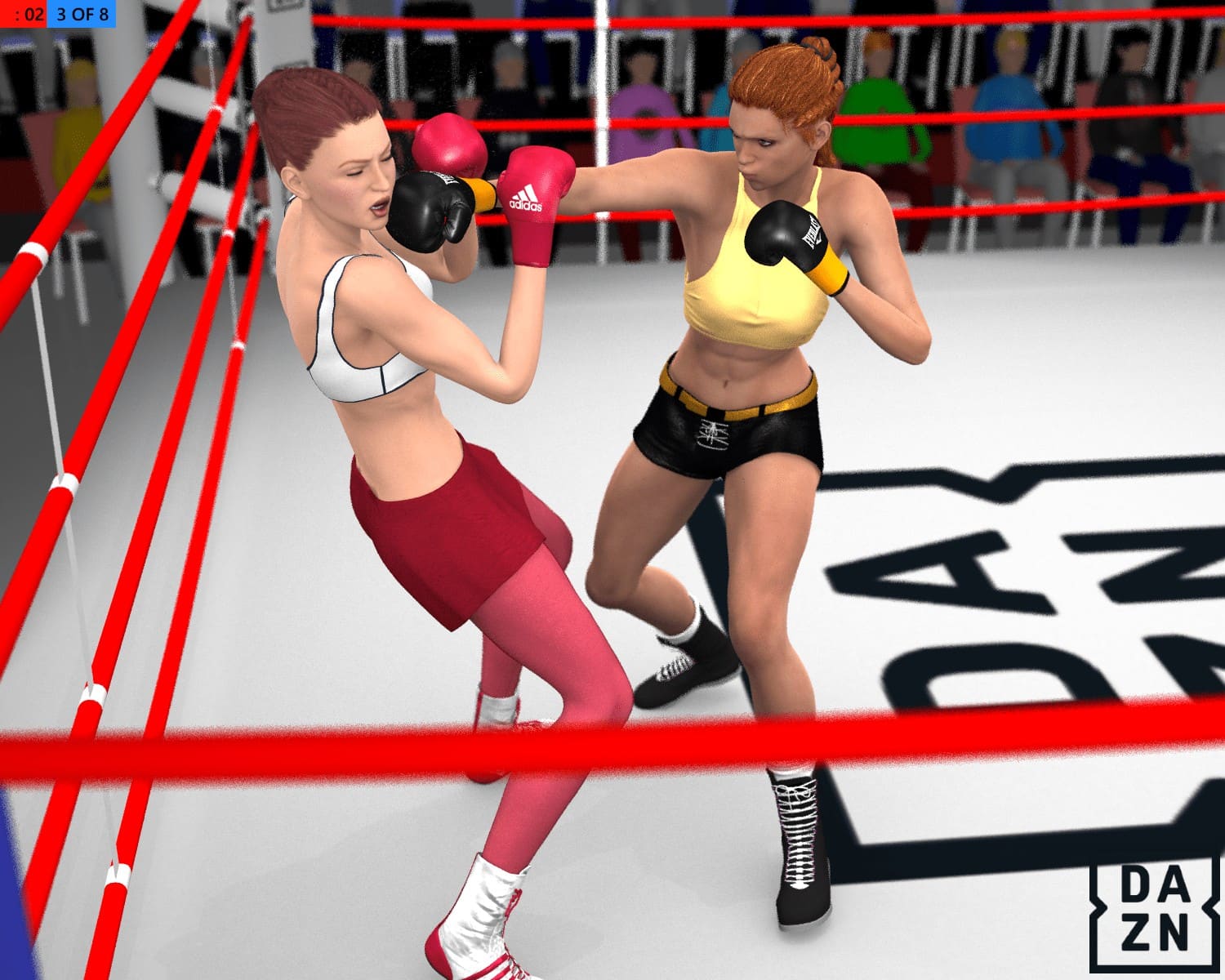 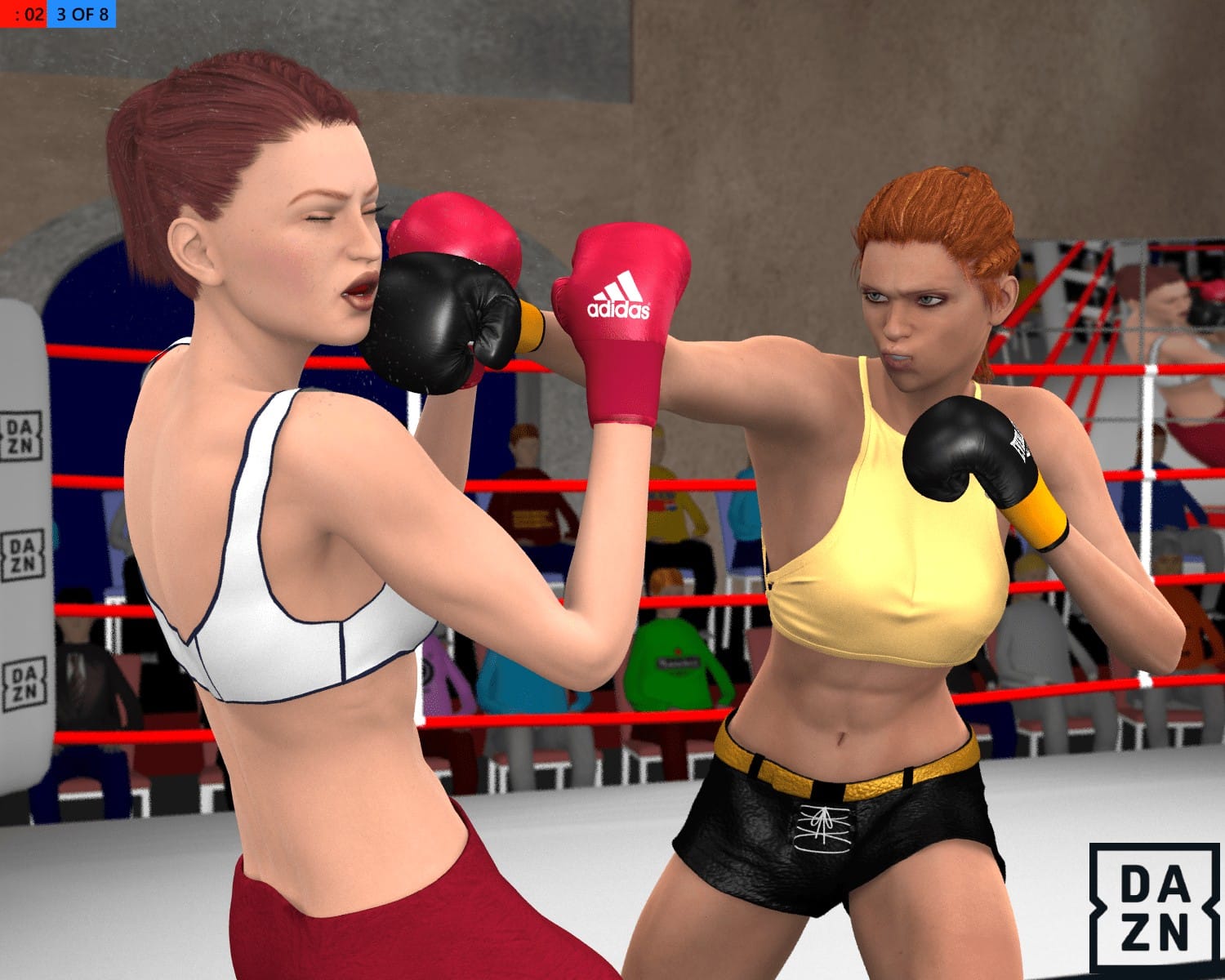 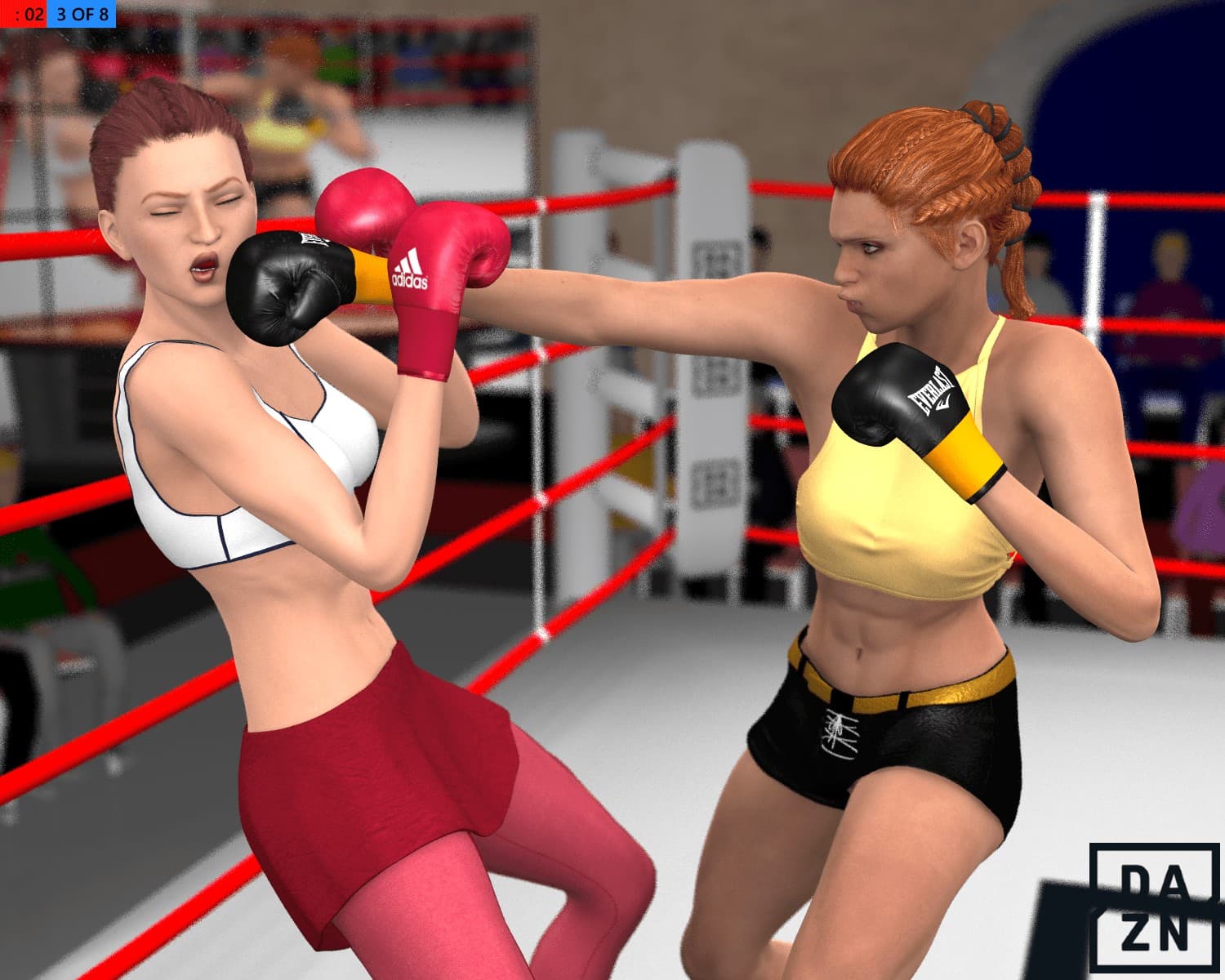 Kasandra wobbles, and then the bell rings.

Laila: “The bell has saved Kasandra Sobieski here in the 3rd round as she appeared to be in deep trouble in the closing stages, hurt to the body and the head by Leanne Storm. The underdog Englishwoman has turned the tables here and she is winning this fight through 3 rounds. Let’s see if the corners can turn things around.”

Emma thinks: Kasandra’s in big trouble here. She tends to wilt when things get hard in sparring and this is no sparring match. I hope Thomas is ready for this.

Kasandra plops heavily onto the stool, looking more than a little bit out of it as Thomas does the usual routine of taking her mouthpiece out and giving her a drink of water.

Thomas: “Okay, that wasn’t your round, but it is just one round. 5 of those left.”

Kasandra thinks: I’m not going to last 5 more rounds. Fucking hell I’m hurt. Those shots to the body were out of this world. They still sting!

Thomas: “She’s going to come after you early in the round, I want you to be mobile and when she steps in, just tie her up. We fight at your distance or not at all, got it?”

Thomas: “Don’t try. Do it. Come on, girl, you spar with Virani all the time, and this girl’s got nothing on her. Let’s raise your game, I know you can do it. Let’s raise the compete level in there. You can outbox her. Be first, and hurt her when she tries to come in. We can make her not want to engage. Commit to it and you’ll be fine.” 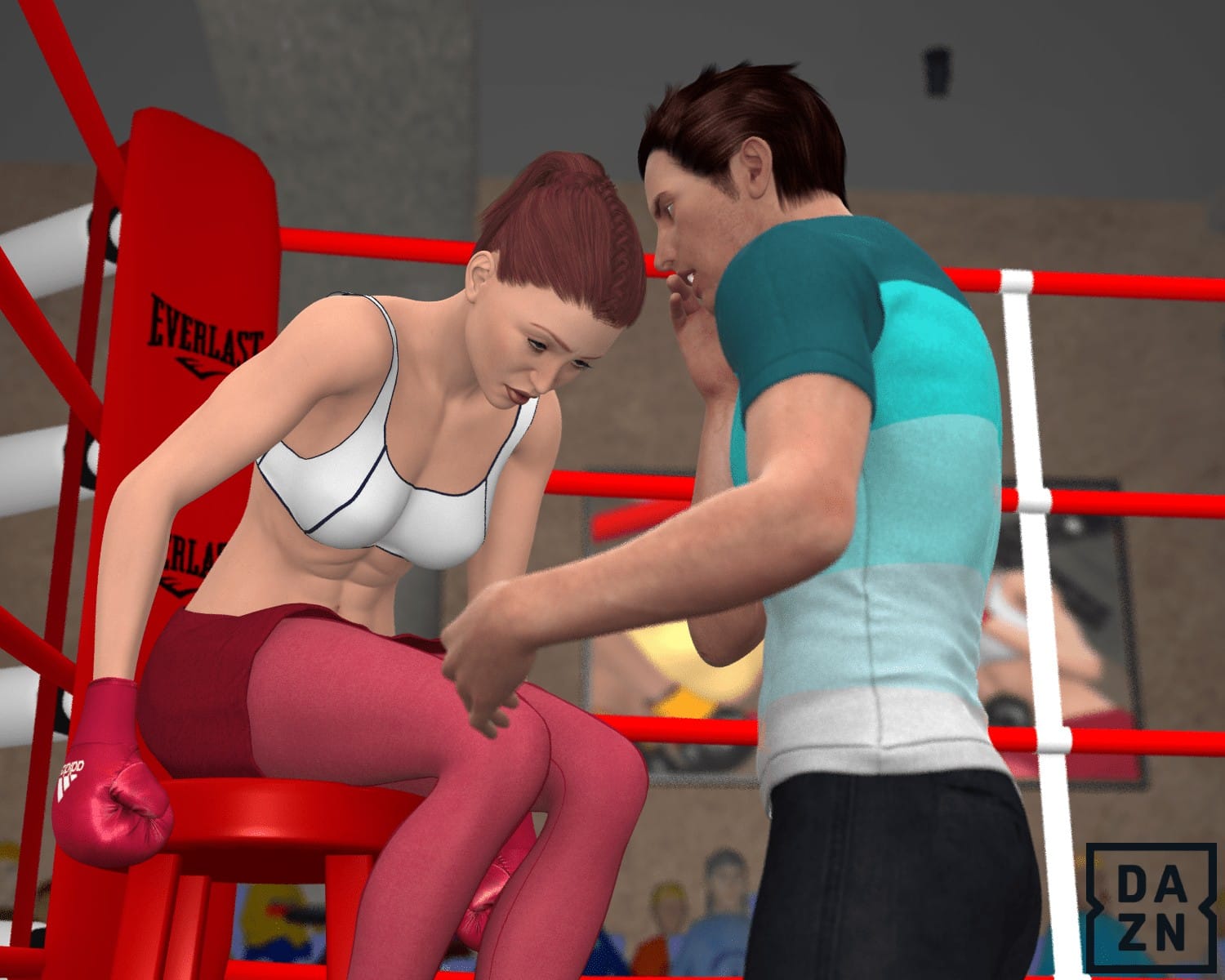 Over in the blue corner, the mood is confident. The girl in the gold top has been able to land her shots and take Kasandra right out of her gameplan.

James: “Beautiful round girl. I knew I passed on some of my talents to you.”

Leanne gives her father a confident, knowing smile in return.

James: “This is the part that you and I are both good at. Now that you’ve hurt this girl, it’s time to put her away. Don’t let her find her dancing shoes again. Corner her and fire away until the ref tells you to stop. Take the body, and it will open the head again. We aren’t afraid of her power, so don’t be afraid to take risks.”

Leanne: “Steak dinner when I win?”

James: “Steak dinner, win or lose. Because you are my girl. It just might be easier to eat the steak if you win.” 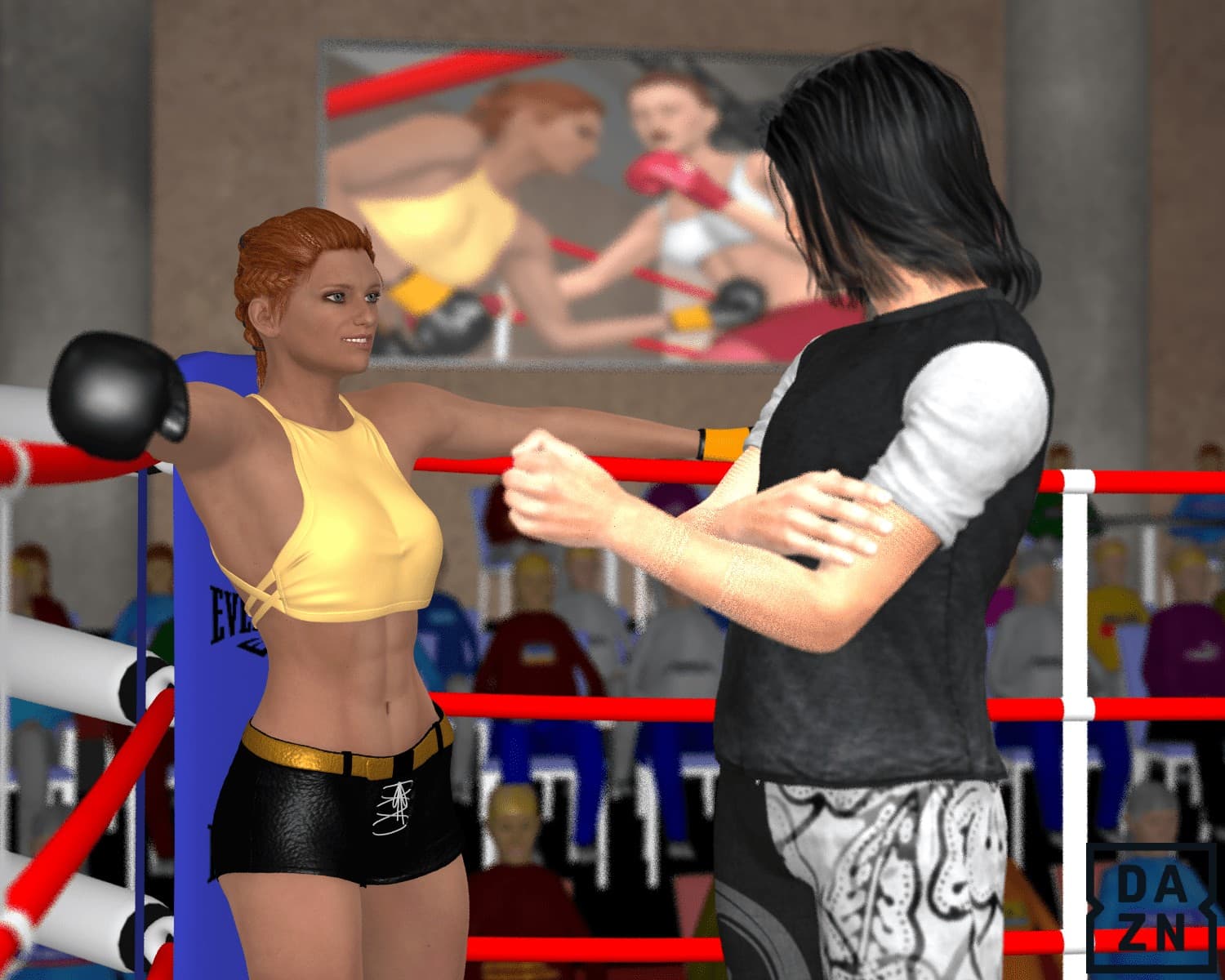 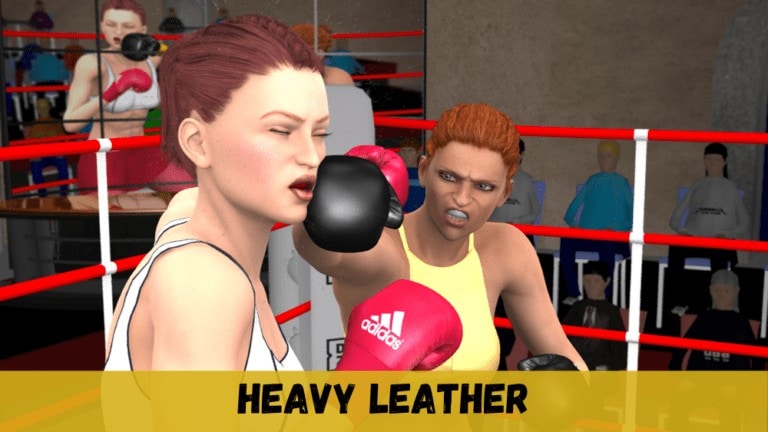 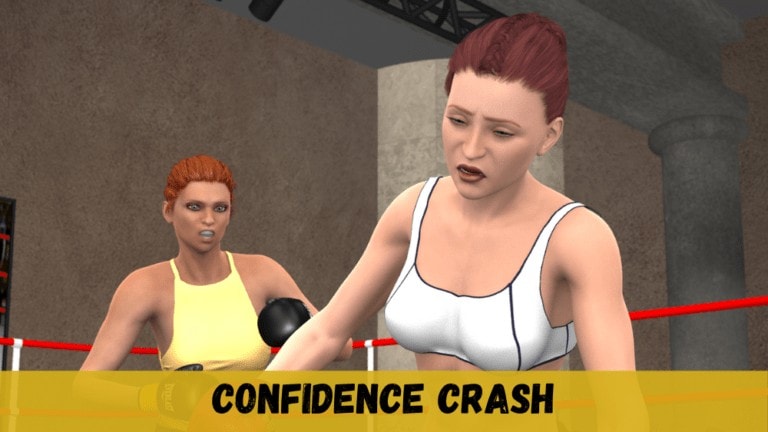