Emma thinks: This is a decisive round. Either Kasandra comes back, or she gets run over.

The two fighters meet at the center of the ring for the 4th round of this 8 round contest. Leanne is the aggressor early on, making Kasandra retreat as she is still trying to find her legs after that last round.

Leanne raises her gloves and comes forward feinting and faking. Kasandra instinctively throws a jab in response, as Leanne prepares to throw a home run punch of her own… 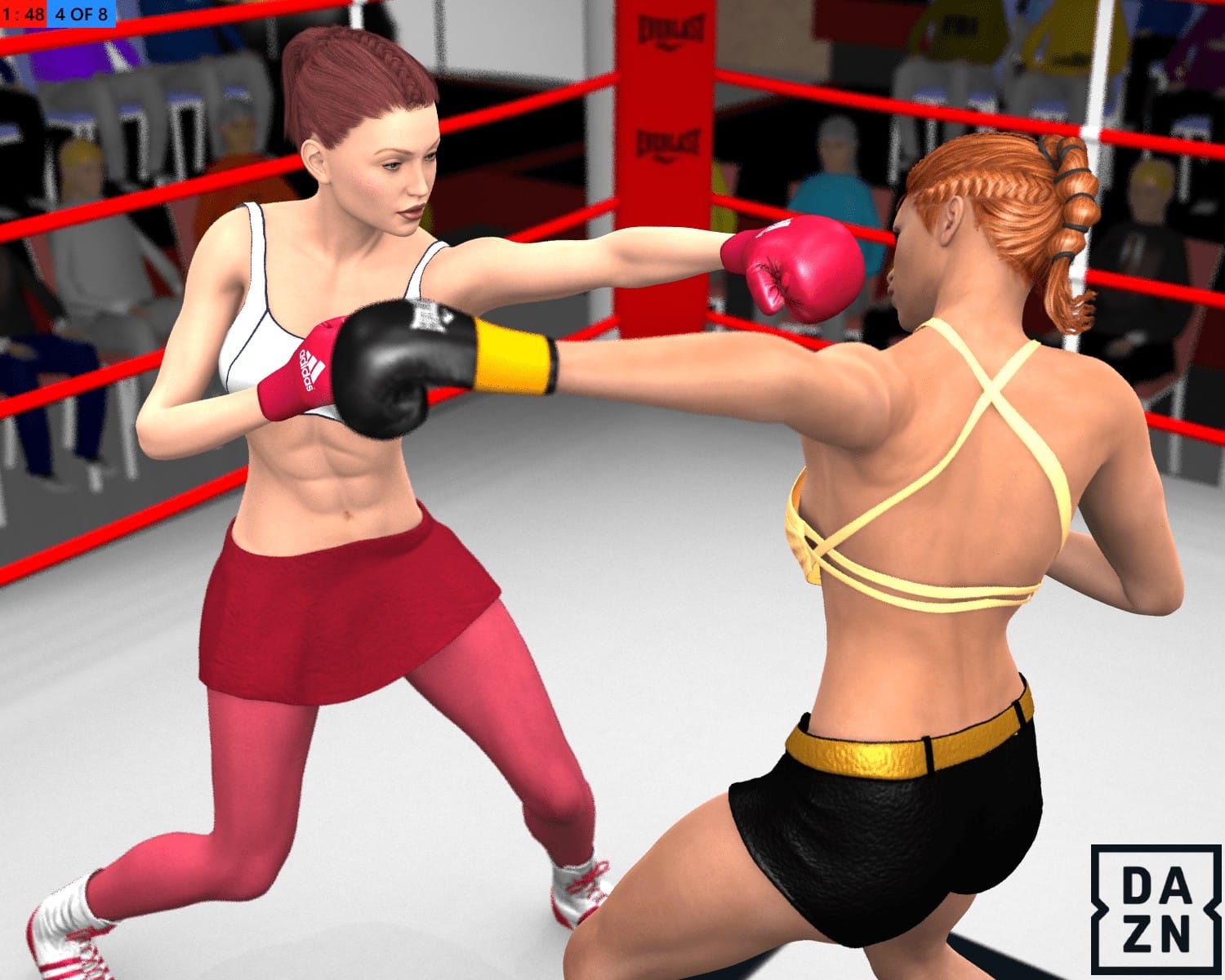 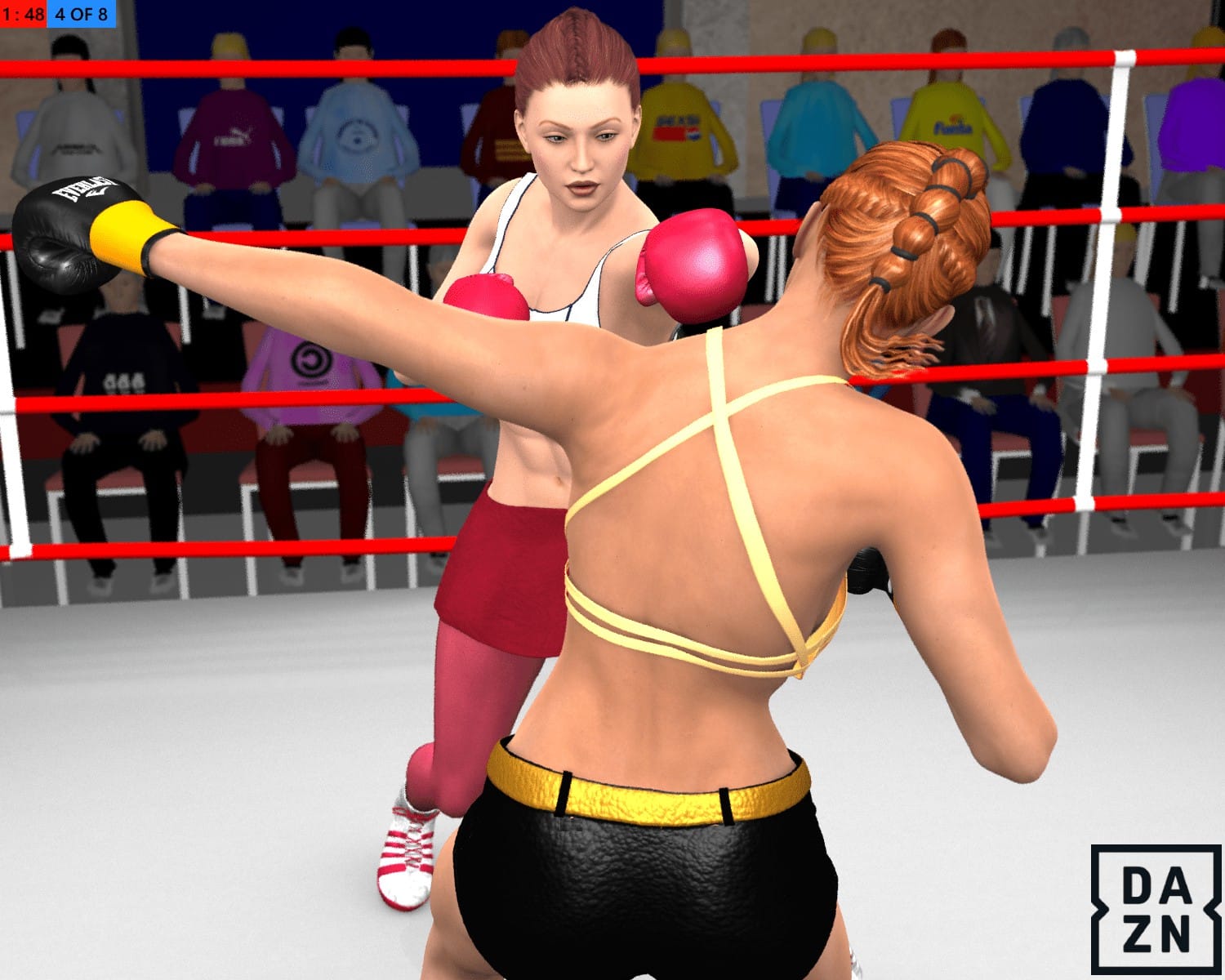 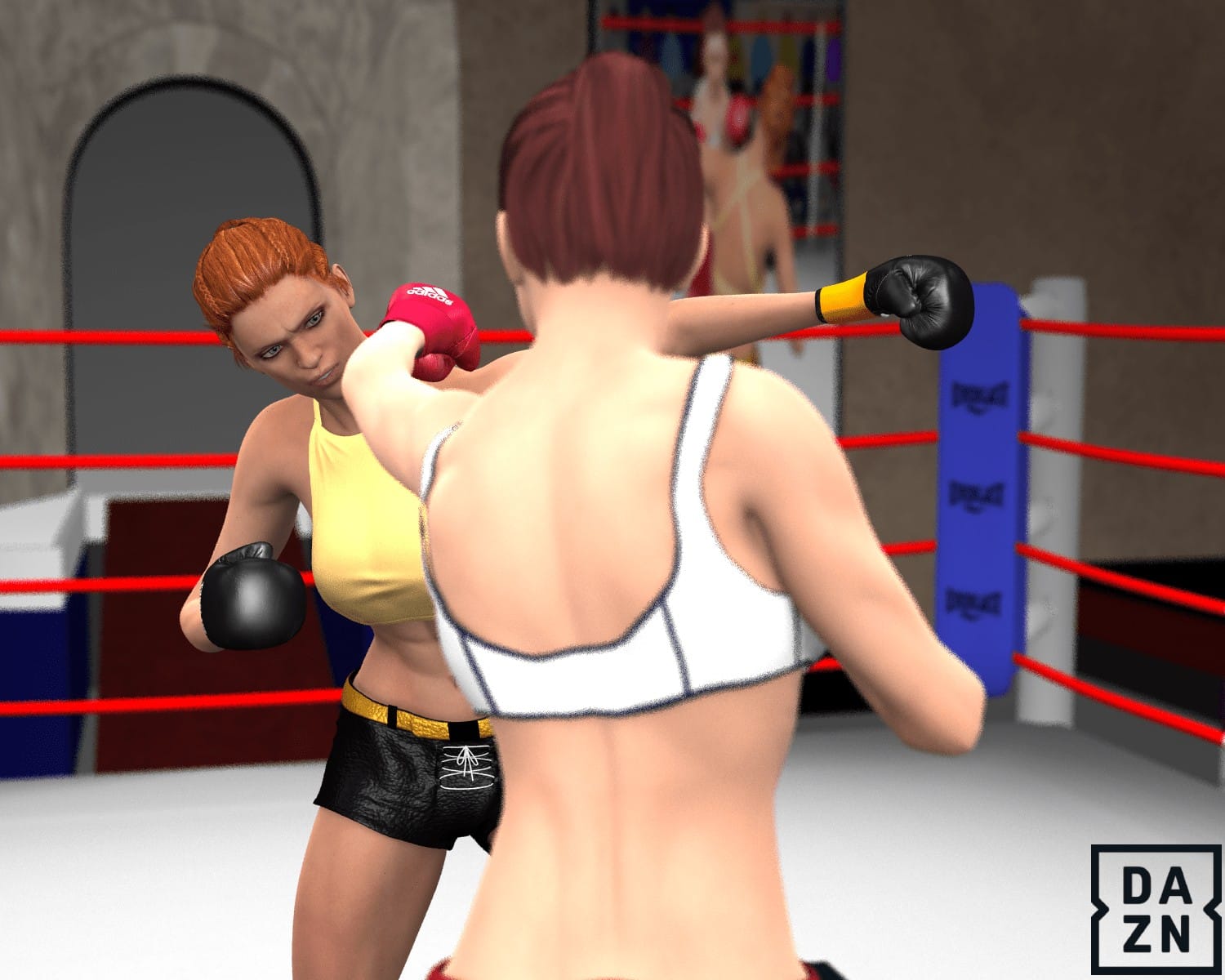 Laila: “A haymaker from Storm! That overhand left hand came from her hip and she put everything into it. Sobieski somehow stays on her feet, but she is staggered!”

Emma thinks: Oh my god. How are you still standing, Kass? 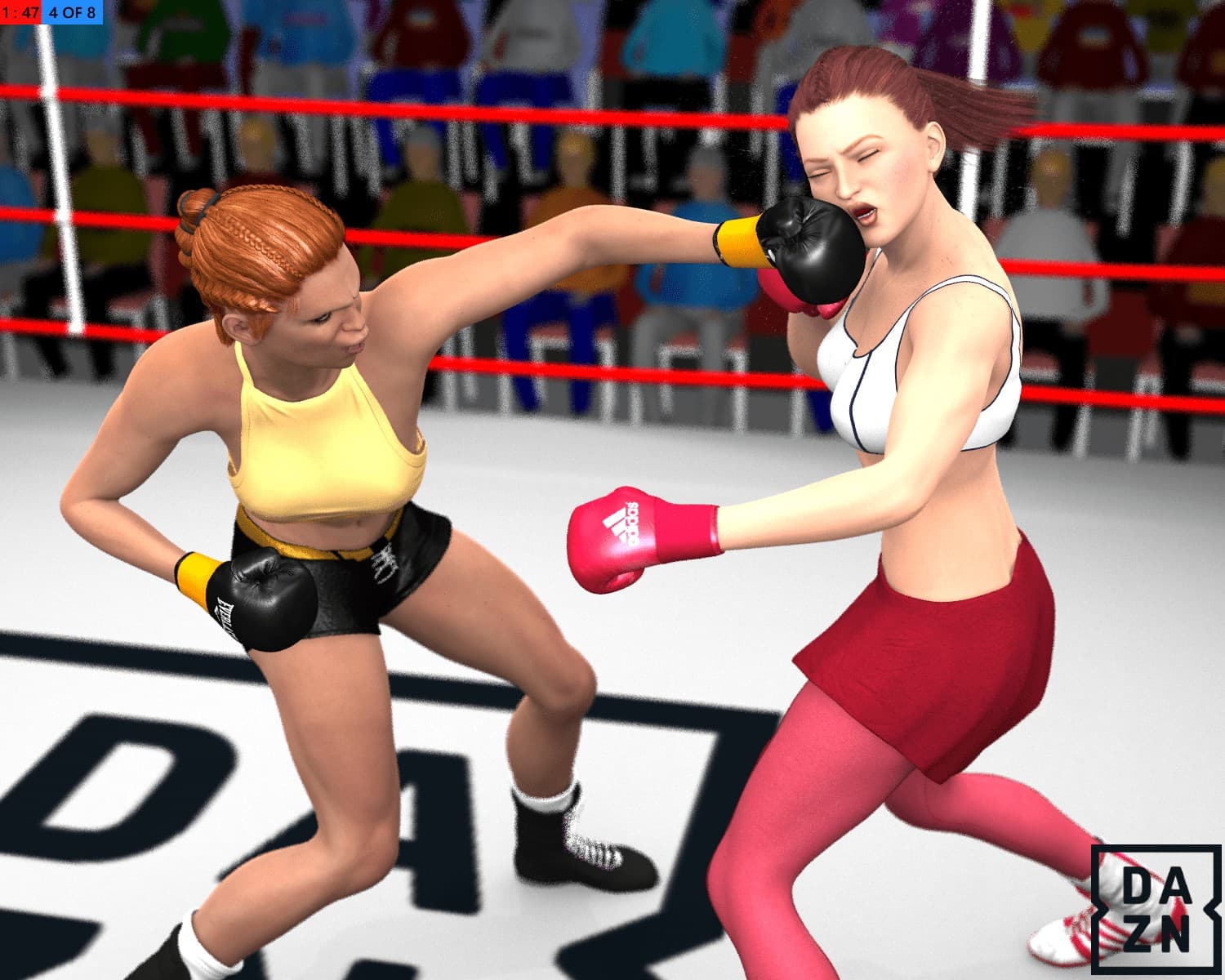 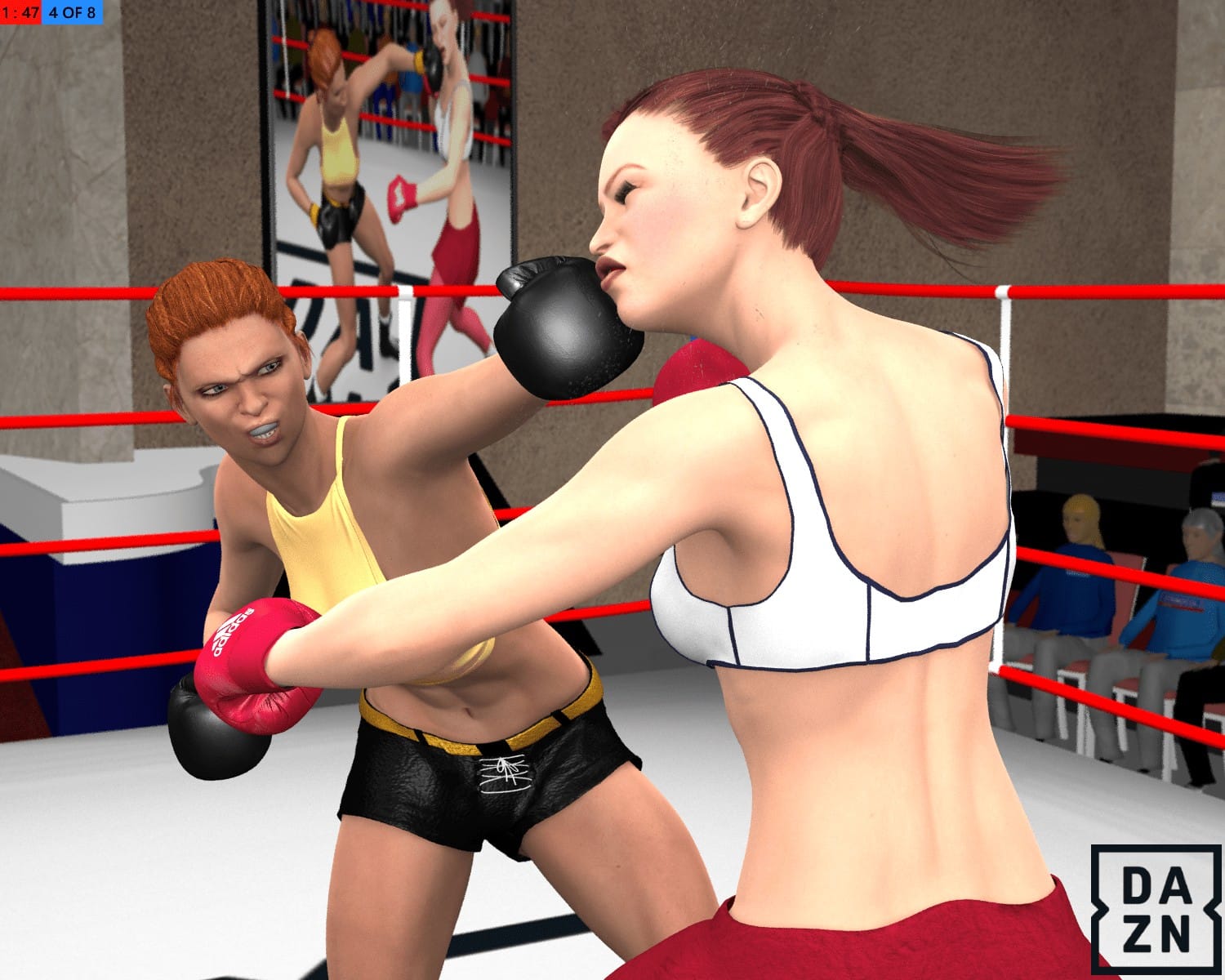 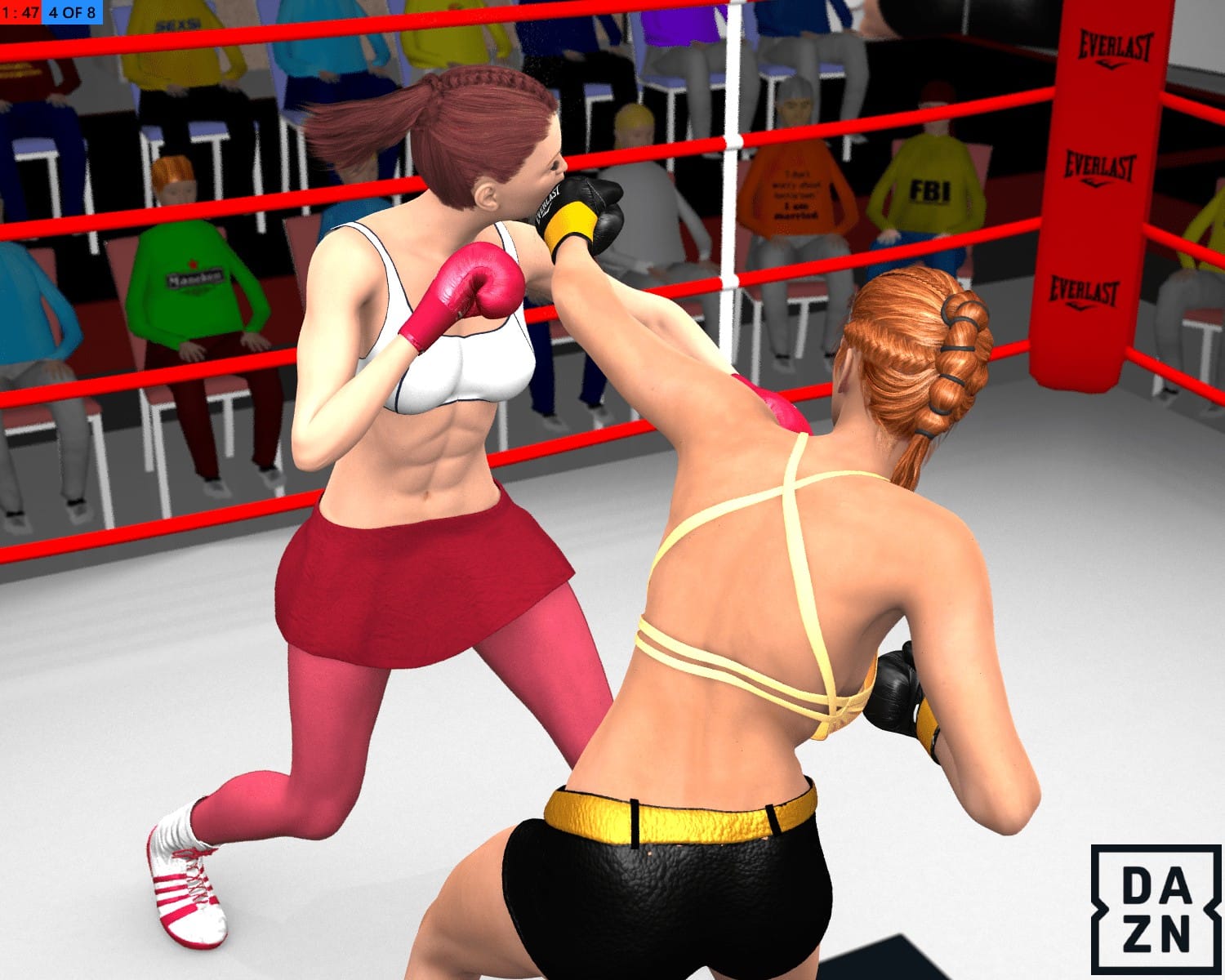 Kasandra stumbles back to her left, her legs not being able to give her the stability they usually do as her brain is trying to recover from being scrambled by that left hook. Leanne freezes for a moment, clearly unsure about what to do next, and probably having expected that Kasandra might have gone down after the punch.

Leanne thinks: How the fuck is this girl still standing? That was knuckles to chin!  That was the hardest punch I’ve ever thrown and I got all of it!

James: “Don’t just stand there! Finish her off!”

Kasandra thinks: Too…hurt…get me out of here… 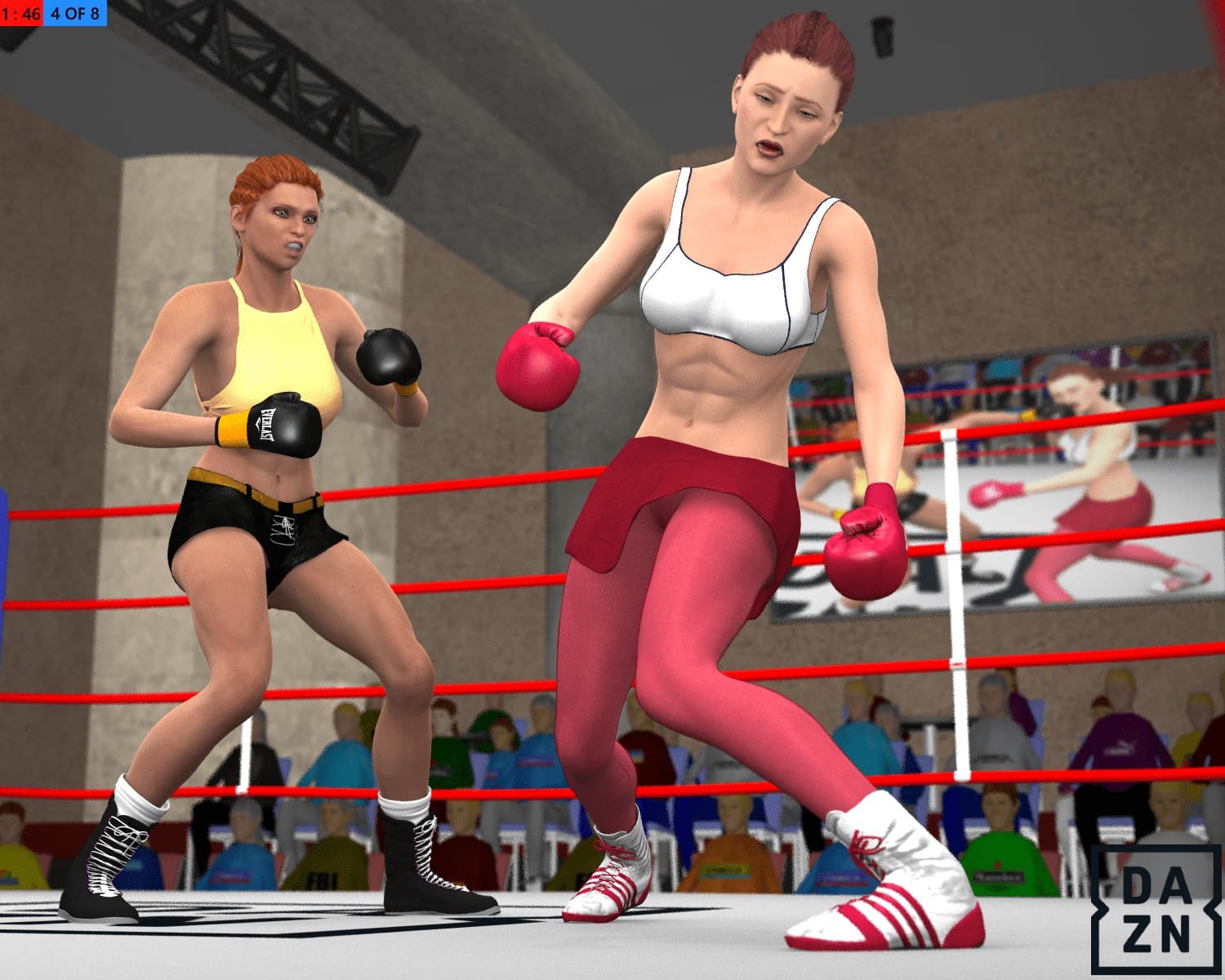 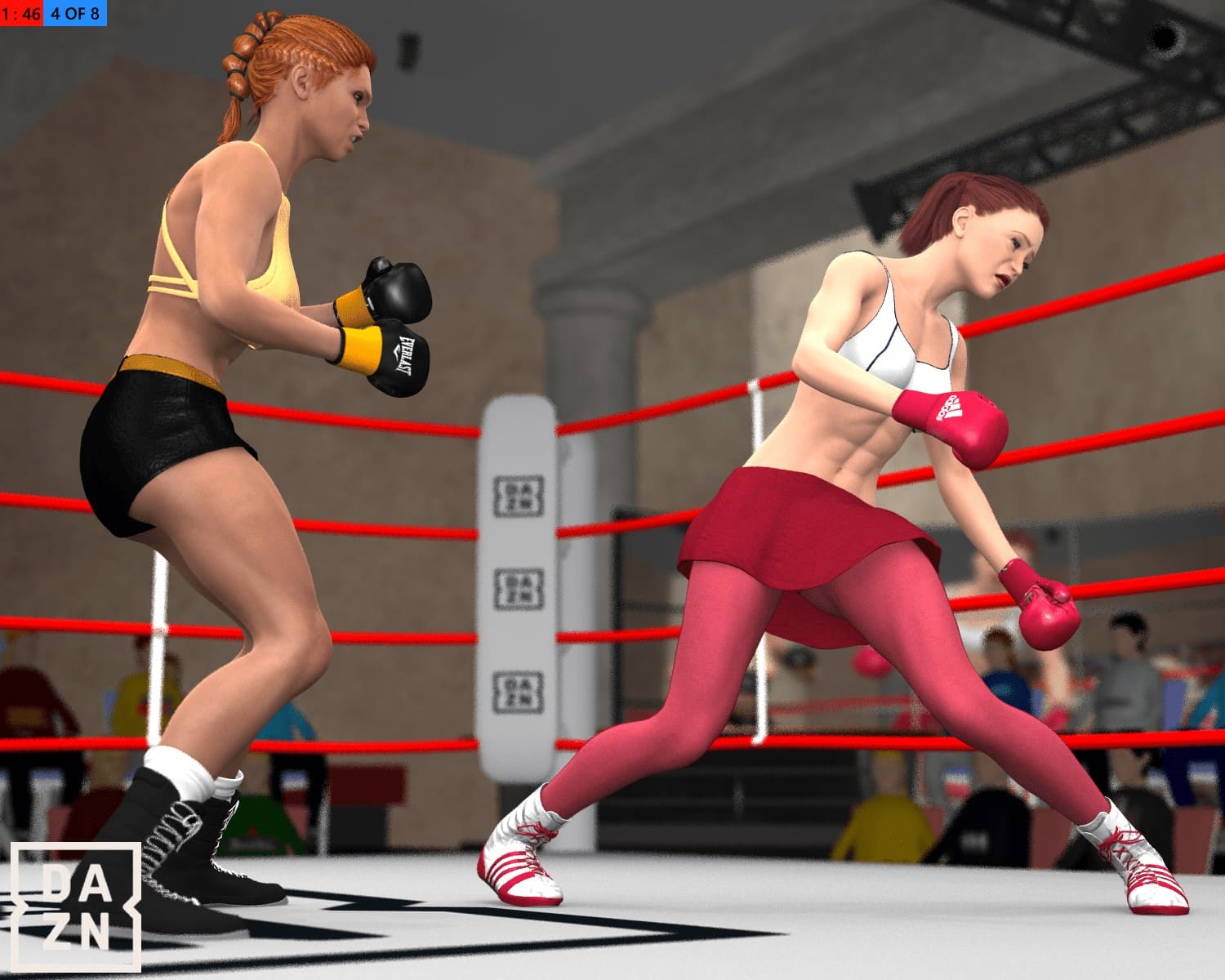 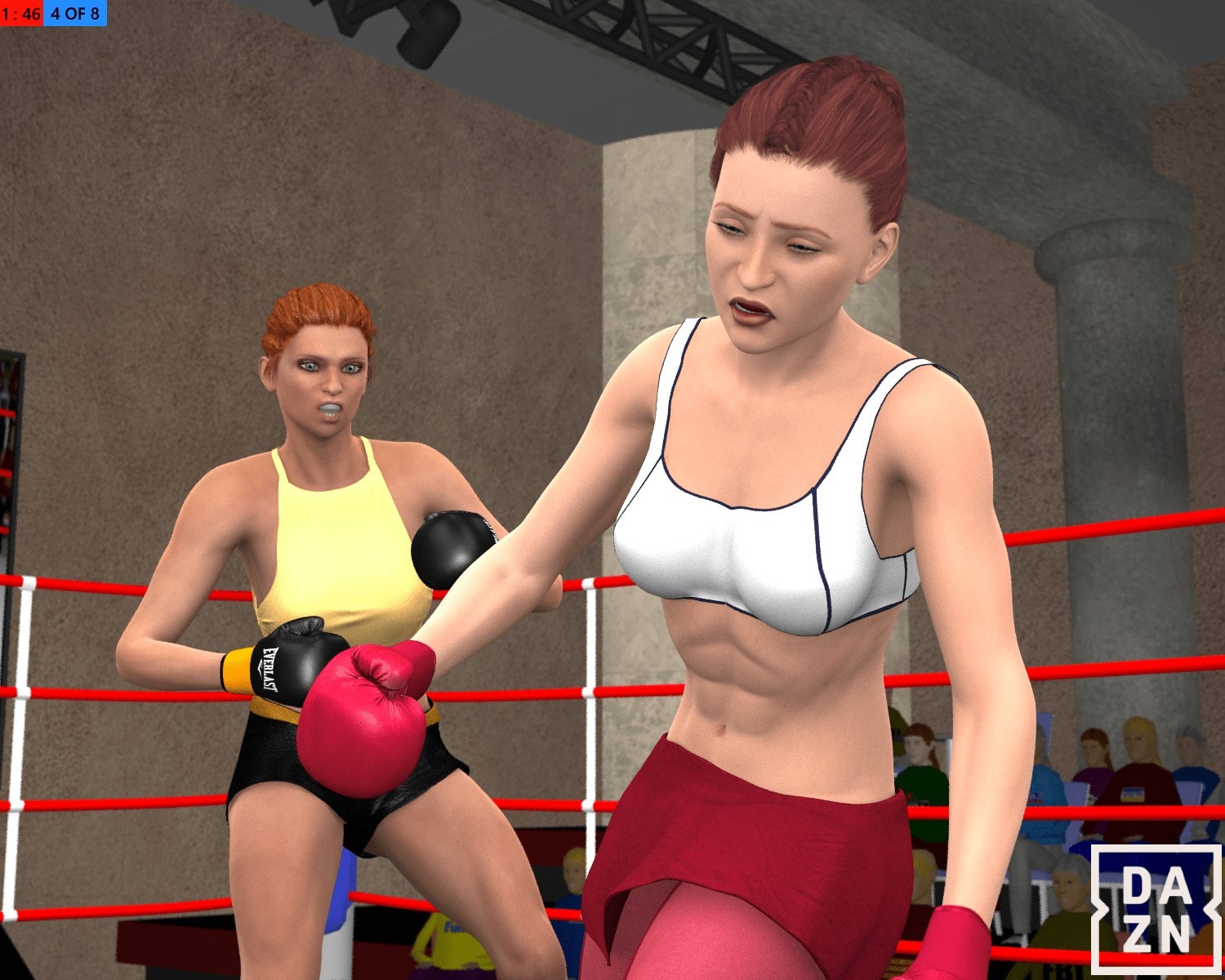 Laila Ali: “Sobieski goes down after that hellacious punch! She kept her feet for a moment, but she seemed to trip as she tried to back away!”

Kasandra wants nothing more to do with this fight, her spirit is broken and the idea of taking another punch from Leanne is one she can hardly contemplate. Still disorientated, she manages to take a knee, having turned her back to Leanne.  A moment later she’s she’s on both knees staring at the canvas as her mouthpiece threatens to escape her mouth.

Leanne might have been able to land another punch as Kasandra went down, but she holds back, seeing the signs of a fighter that simply doesn’t want to be there anymore. She may look like a tough, no nonsense fighter, but there is a sense of mercy, of a camaraderie between boxers there too. If the situation was reversed, she’d want her opponent to pull her punch too. 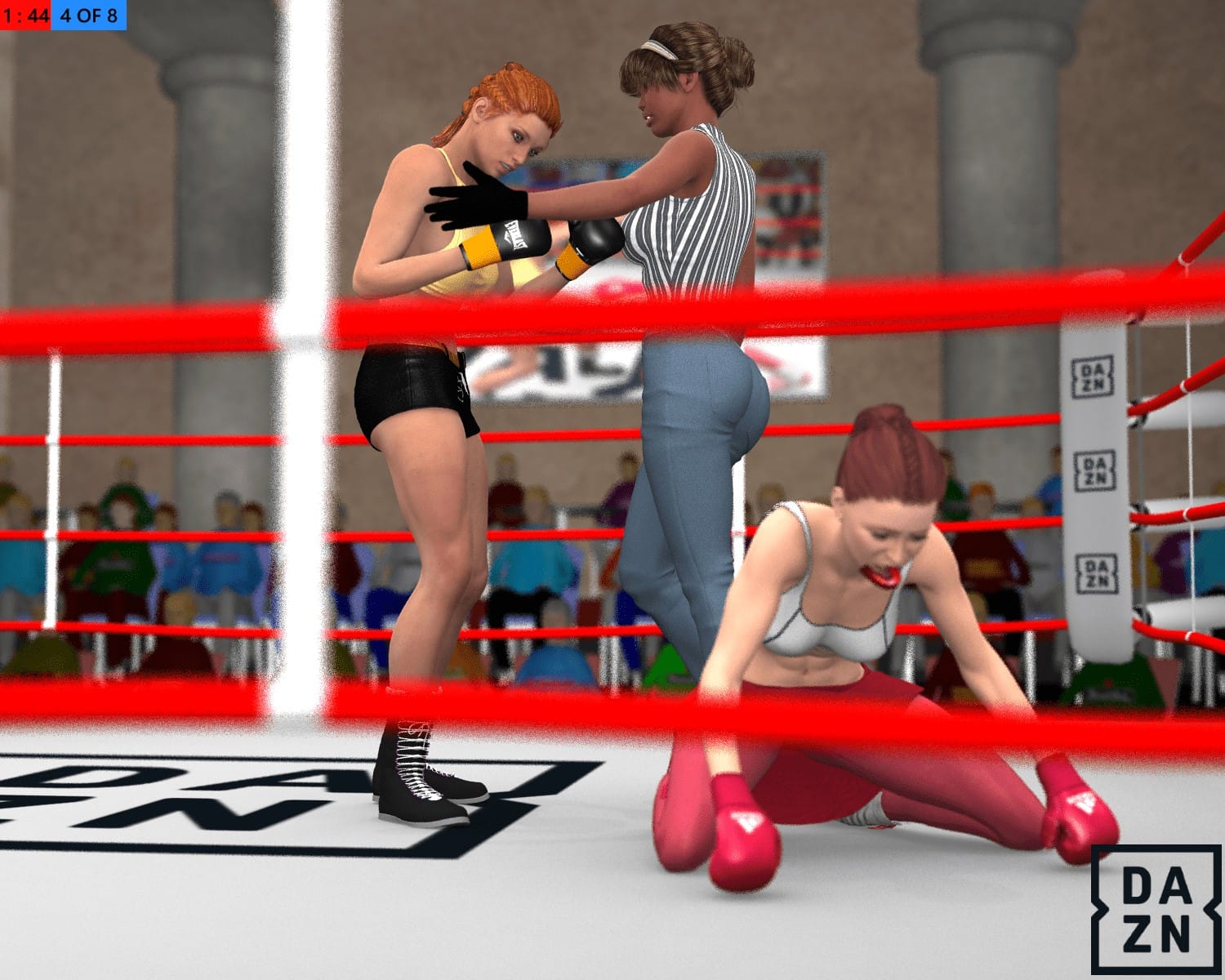 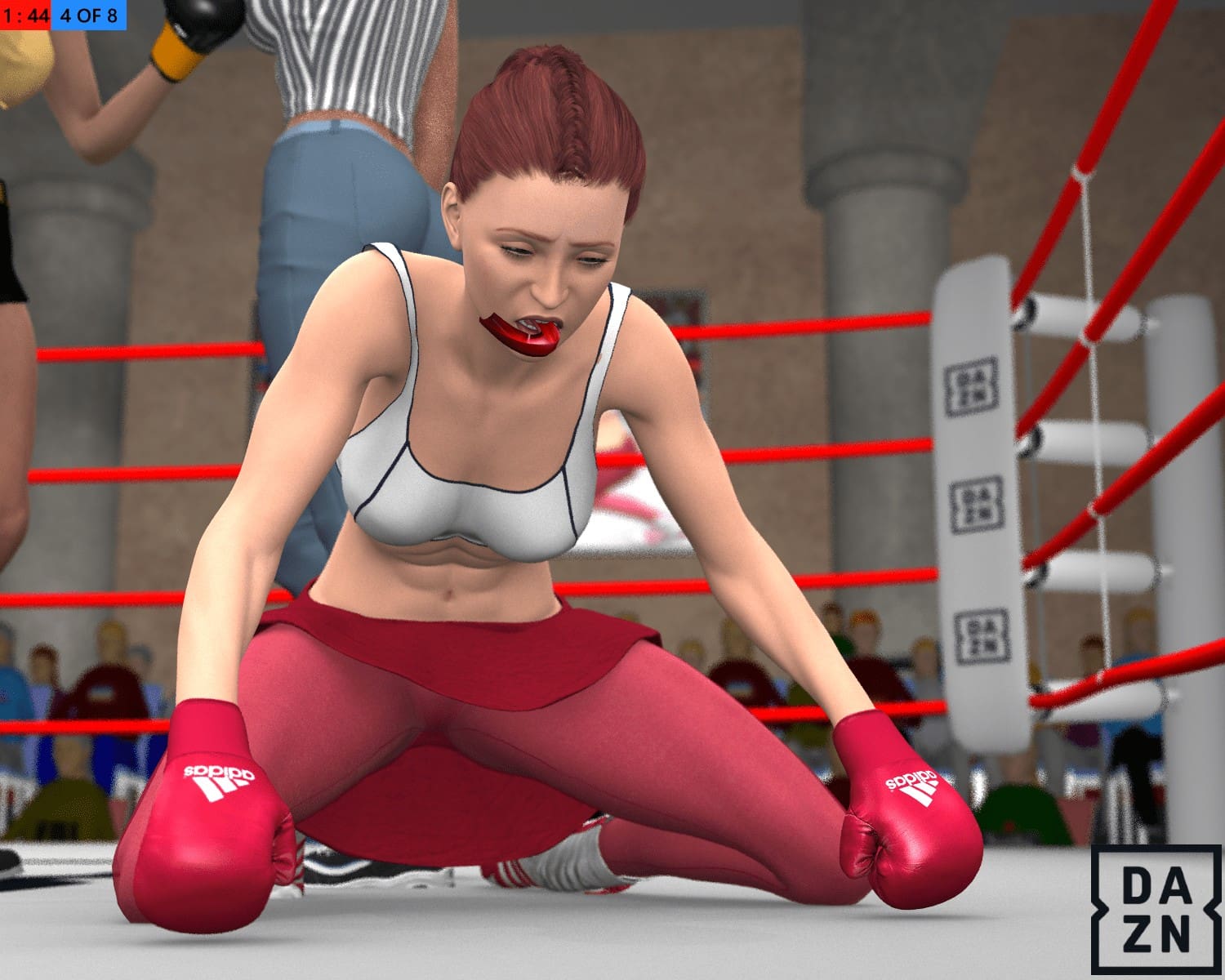 Referee Clarissa Starling is quickly on the scene as Leanne Storm dutifully retreats to the neutral corner, still slightly amazed that her rival is conscious.

Kasandra only stares downward at the canvas, her head spinning. There’s no will to fight on against the pain, only an acceptance that she has reached her tolerance. 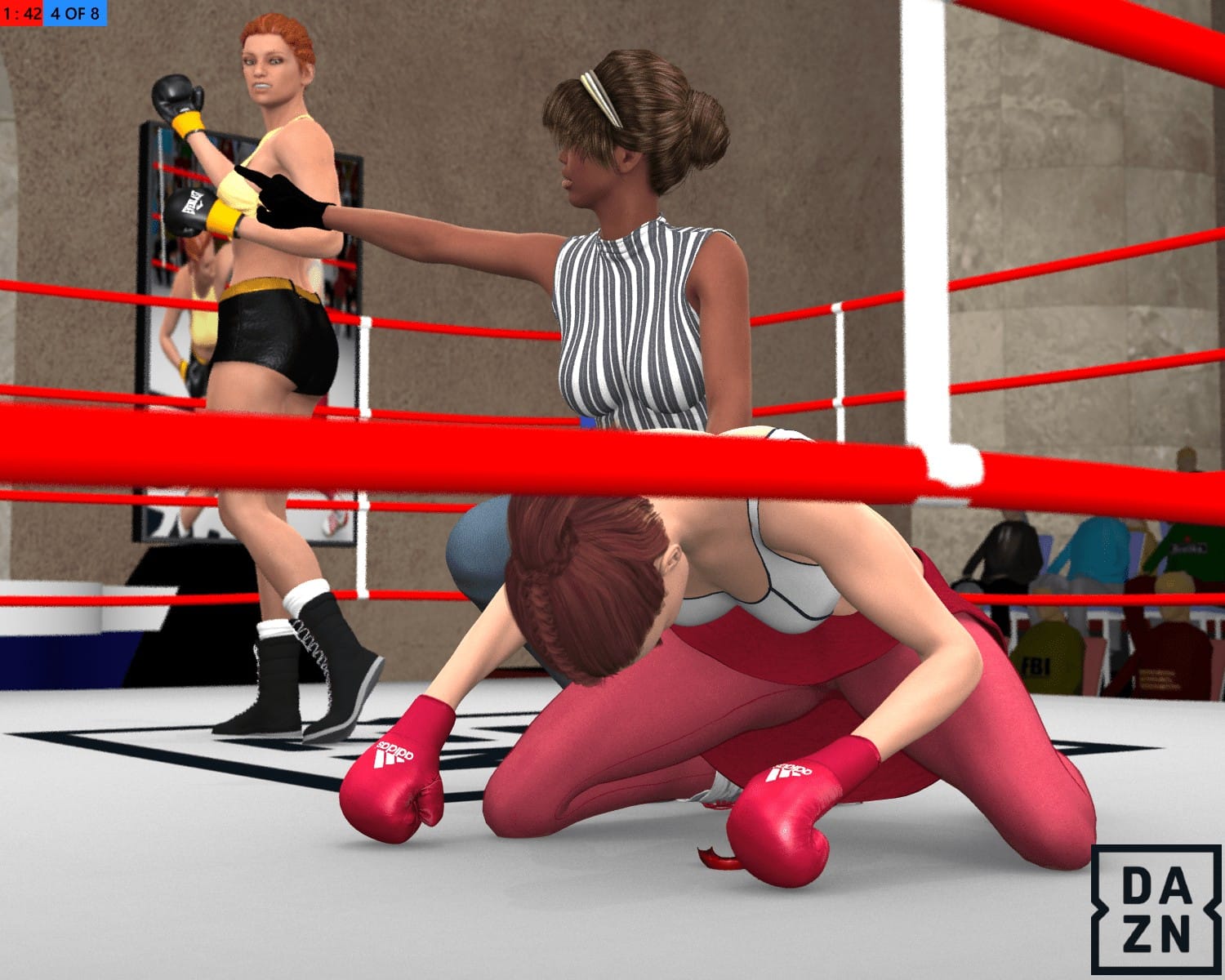 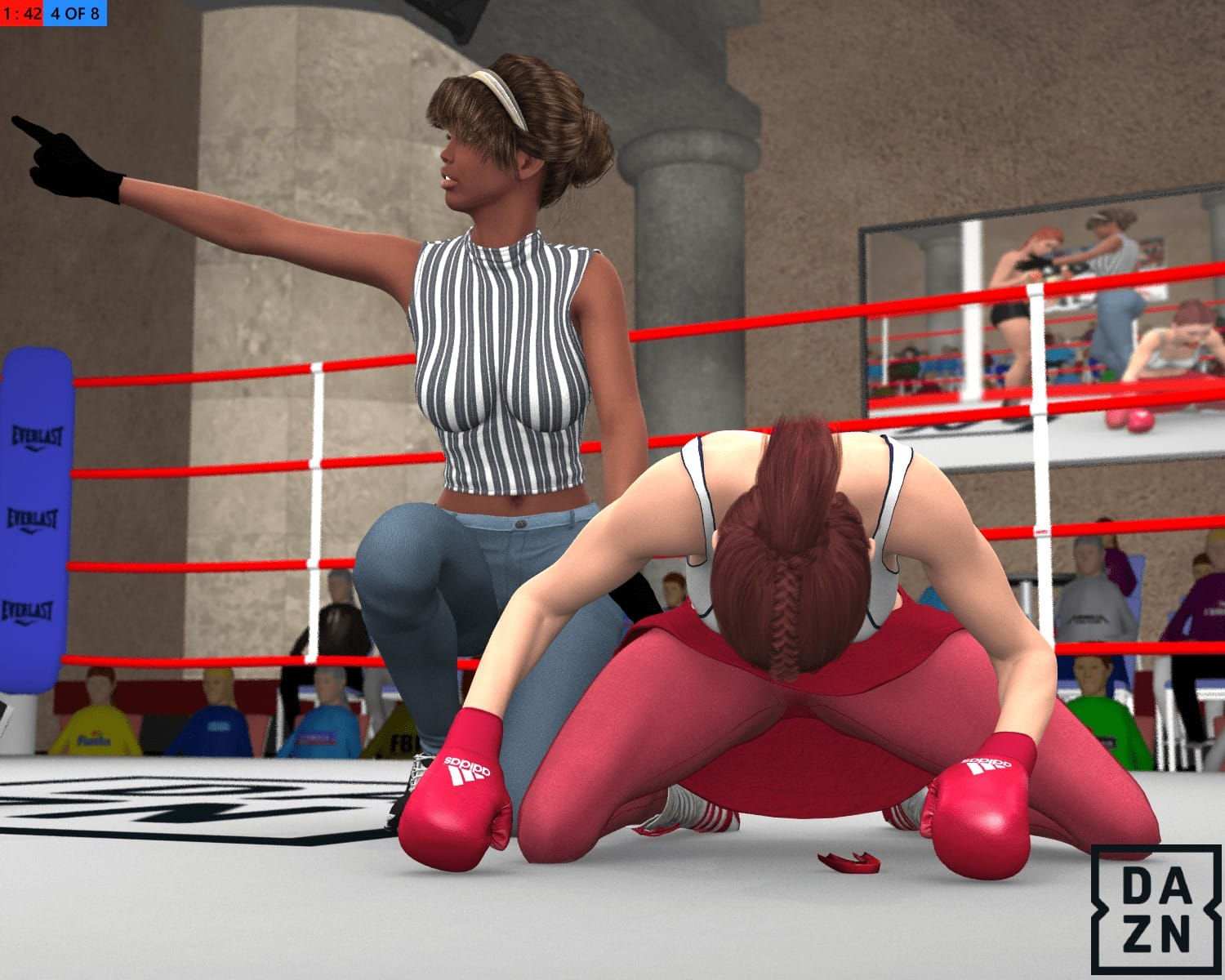 Kasandra lifts her head for a moment as she feels the ref kneel beside her. Then she bows her head towards the canvas again as her mouthpiece drops from her slack mouth.

Clarissa thinks: I looked into her eyes there for a moment, there was nothing there. The only sound she is making is a weary moan. There isn’t any fight left in this girl. You don’t spit out your mouthpiece if you want to keep fighting. That punch broke her. This one doesn’t need a count, it’s already over.

Clarissa: “Fight’s over! Stay down, Kasandra, it’s over.”

Laila Ali: “There will be no count needed here! Referee Clarissa Starling has had a close look at Kasandra Sobieski and determined she is not fit to continue! A close fight has come to a sudden and unexpected end as Leanne Storm’s punishment has ended with a stoppage victory! A huge win for the Englishwoman.” 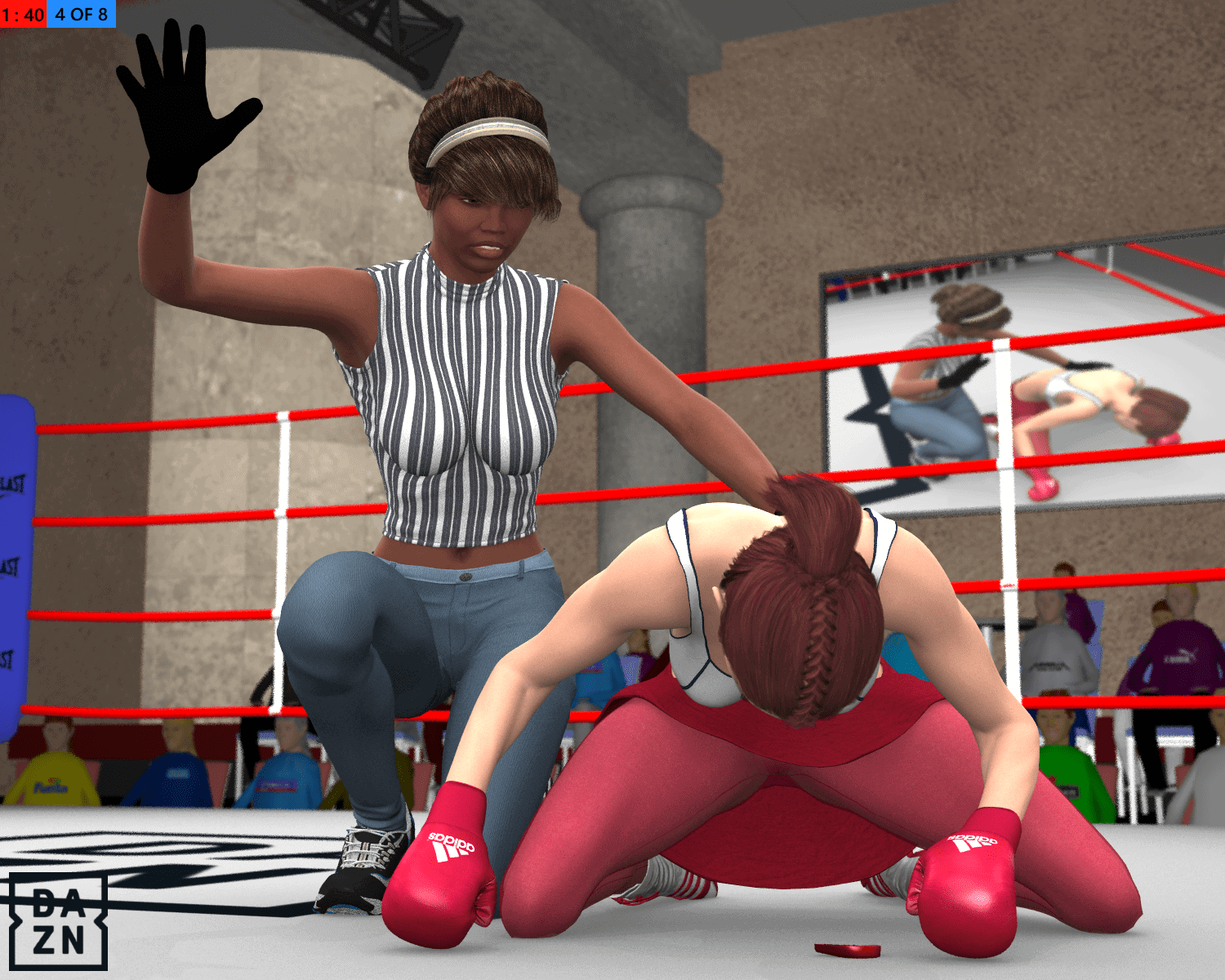 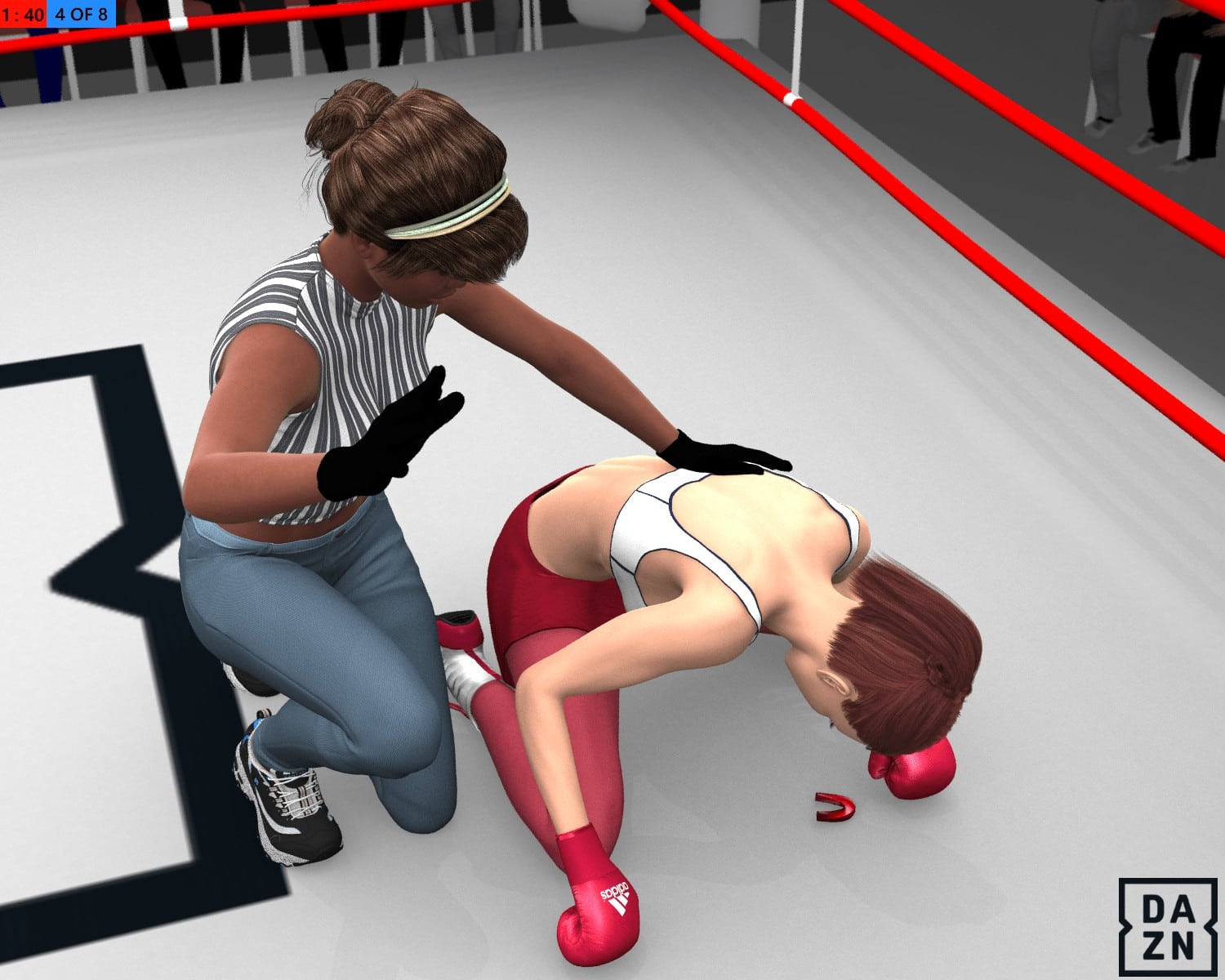 The referee attends to Kasandra, while in the other corner, father and daughter share a warm hug.  Both veterans of the ring at this point, they know that each victory is sweet, but that this televised victory may be the sweetest.

Laila: “It’s a scene played out over and over again in the ring, one side is elated, having the joy of victory, while the other side is deflated, having to wonder what went so wrong on this night. I have to say that in my opinion, Leanne Storm was very underrated as she performed very well in this fight, blowing away what was perceived to be a less experienced, but more talented fighter.  There will be questions in the Sobieski camp of how this one got away.” 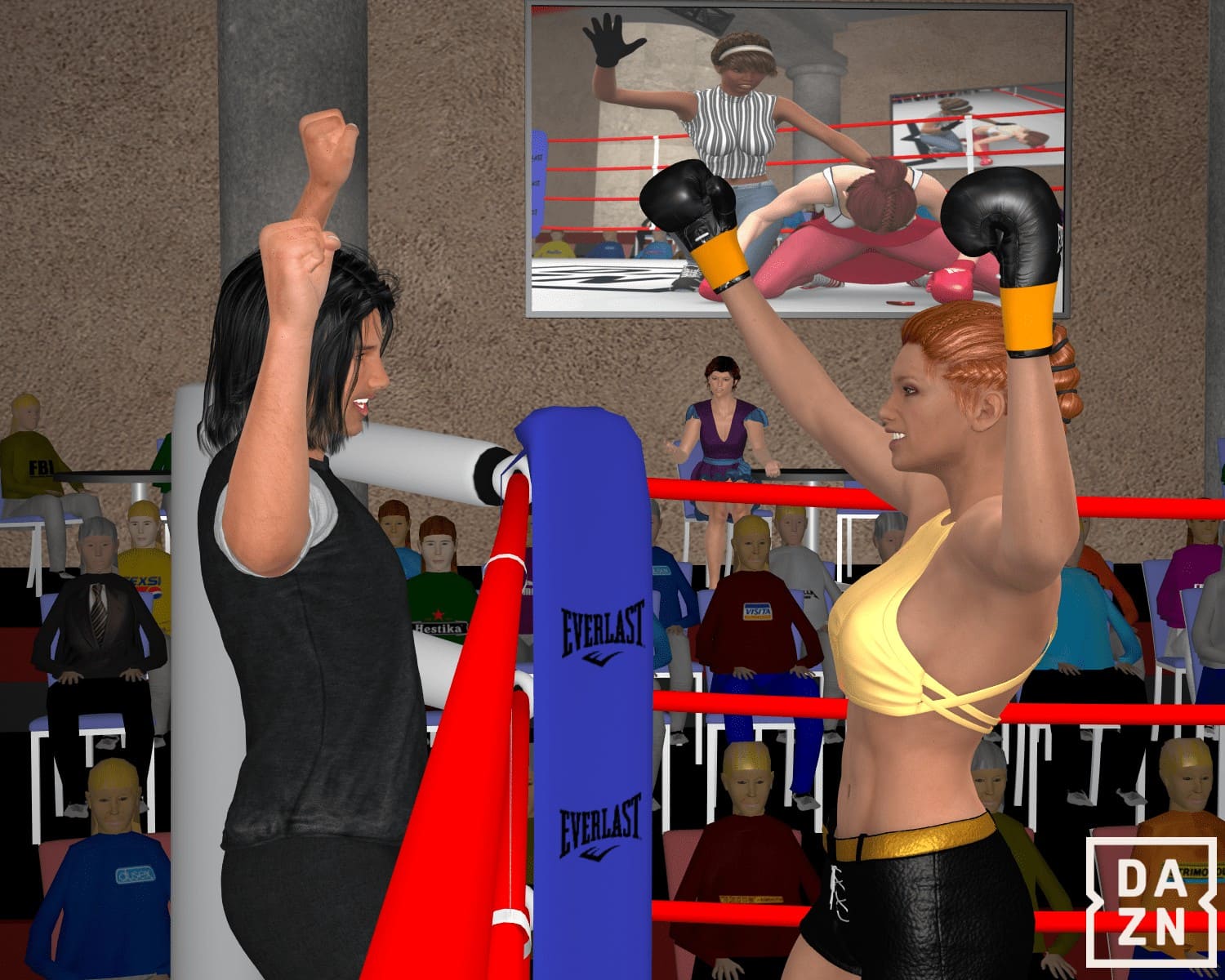 Clarissa and Thomas help a slightly woozy Kasandra to her stool where she is checked over by the ring doctors. Clearly deflated by her first loss in the pro ranks, Kasandra’s answers are short and terse. Clearly she wants to be anywhere but here.

Once their checkup is complete, with no problems being detected,  Thomas gets a few moments with his charge.

Kasandra: “If you could dig me a hole to crawl into so I could die, that would be great.”

Thomas: “There’s nothing to be ashamed of, Kass. It’s just a loss.”

Kassandra: “You don’t understand…I gave up in there.”

Thomas: “No, you got hit with a howitzer of a left hook that would have knocked a young elephant out cold, and you still almost withstood it. You didn’t quit.”

Kasandra looks down. Her coach doesn’t understand. Her spirits are lifted briefly as Emma elbows her way to her corner for a much needed talk.

Kasandra: “I’m alive. She hit me so hard at the end there, I think I was fighting you.”

Emma: “Don’t worry, I can’t hit that hard. Let’s talk after okay? I know this feeling sucks, and you want to be alone, but I’m going to be there for you okay? Don’t avoid me because I will track you down and smother you with my friendship, okay?”

Kasandra manages a weak smile at her friend. But Emma is the first person since the fight ended that made her feel just a bit better. 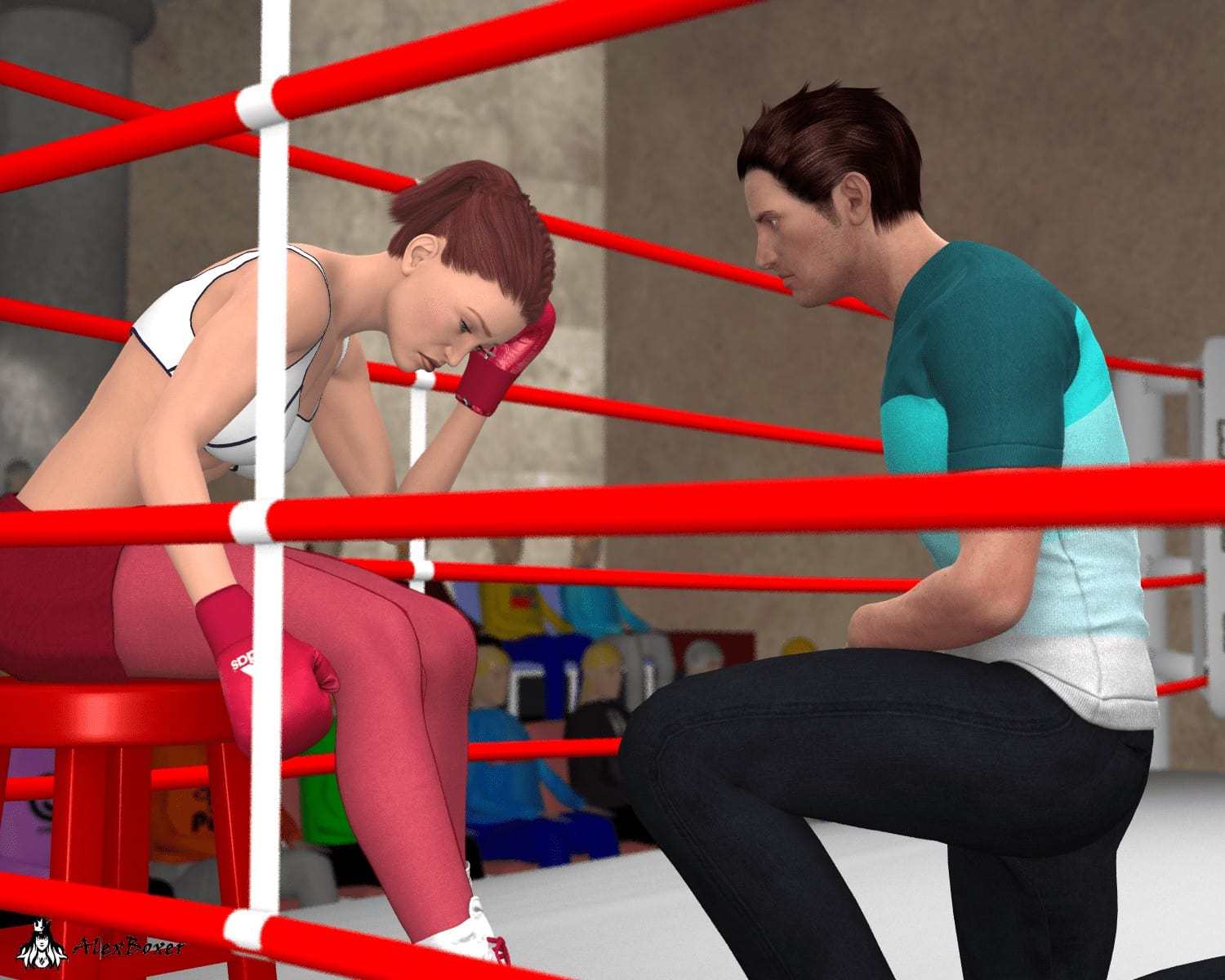 Before Kasandra and Thomas can make their way out of the ring, Leanne manages to cut through the crowd to get to her opponent. Still not confident that she can stand, Kasandra remains seated, while Thomas gives the two fighters space. Leanne embraces Kasandra lightly before kneeling before the defeated fighter.

Leanne: “Are you okay, Kassandra?”

Kasandra thinks: Why is everyone asking me that?

Kasandra: “Yeah. I don’t think I’ve ever gotten hit like that. I think I forgot my own name for a minute there.”

Leanne: “Girl, you almost withstood that! You are a warrior for being able to stand after that. Respect.”

Kasandra: “Next time, I’ll try to avoid it. Easier than having my chin rattled.”

Leanne: “Thank you for the opportunity to fight you on this stage. I honestly think you are a really, really talented fighter. I’m sure you’ll do great in your career. If there’s anything I can do to help you out, please do let me know. I might look a bit scary in the ring, but I think I’m a bit of a softie outside the ring.”

Leanne embraces the Polish fighter again, which Kasandra returns a bit more warmly this time, having detected nothing but honesty from her recent opponent. 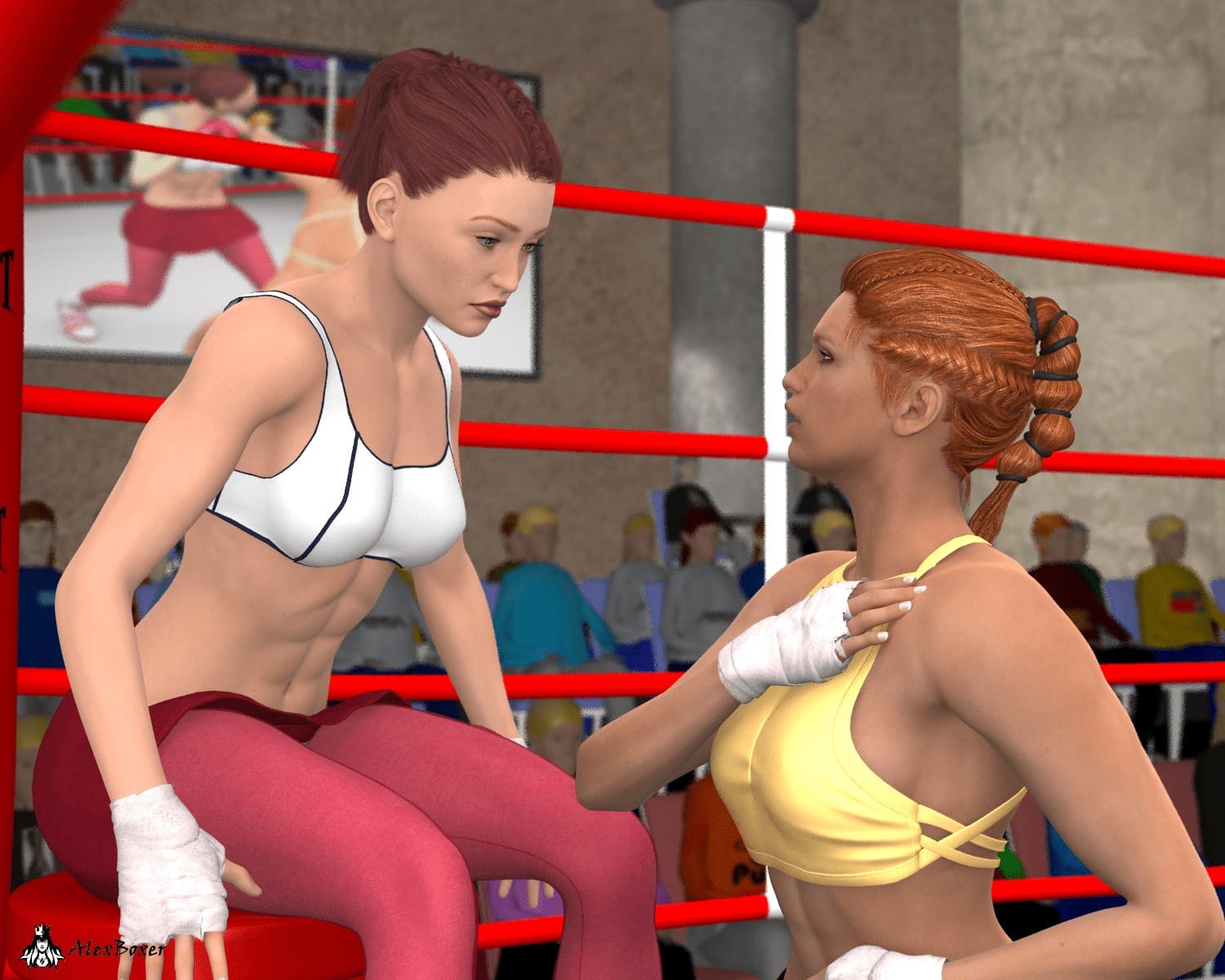 Kasandra exits the ring, as she’s not really necessary for the final part of this story, the part where the winner is officially confirmed.

Ring Announcer: “Ladies and Gentleman, referee Clarissa Starling stops this bout at 20 seconds of the 4th round, the winner by technical knockout, Leanne Storm!”

Leanne gets her arm raised in victory by Clarissa.  There’s no doubt that the Englishwoman is a very happy winner. 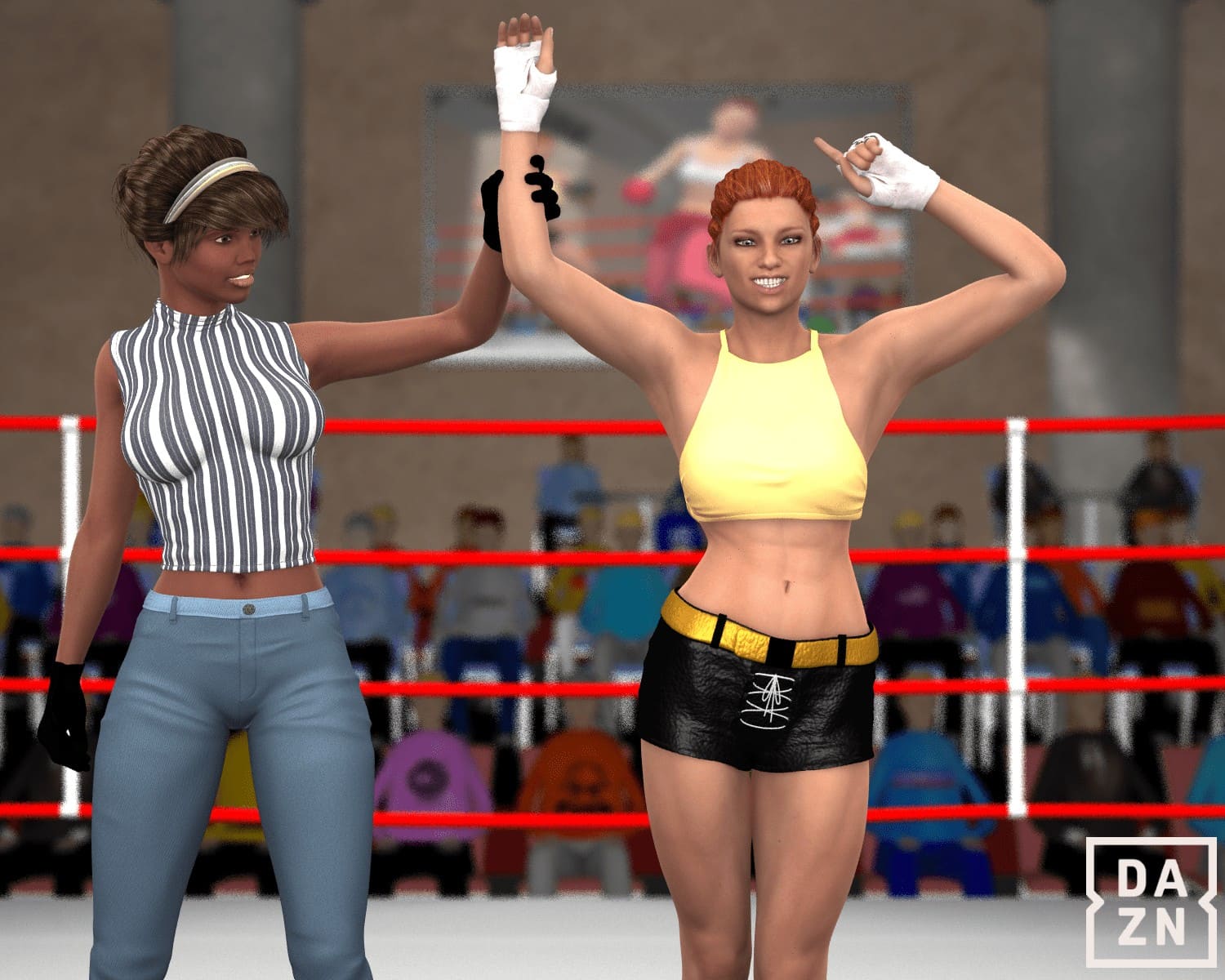 Laila: “A happy winner tonight in a well fought contest.  I think I speak for most of us when I hope that we will see Leanne Storm back on DAZN as soon as possible!”

Emma thinks: Okay, there’s something I’ve got to do here now. 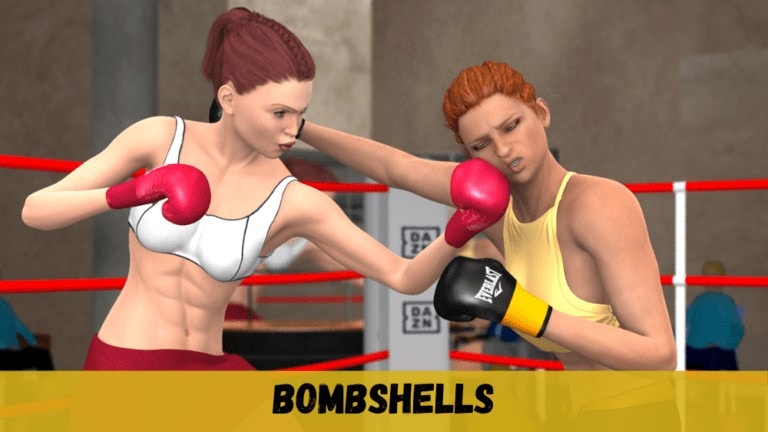