Esther: “One down, nine to go. Sophie Schumann opened hostilities effectively against Megan Thomas, the American Lightweight champion. Can she continue her work? Let’s find out.”

Having been burned by the young puncher, the veteran keeps a little more distance as the new round gets underway. While she loves landing big shots, she is less keen on receiving them. Eating orange gloves wasn’t fun.

Extra space means extra time to think. Megan feels more at ease to release her jab. As Sophie is drawn in to attack, she sends that straight left out in the middle to attack the nose as she opens her guard to throw a left. 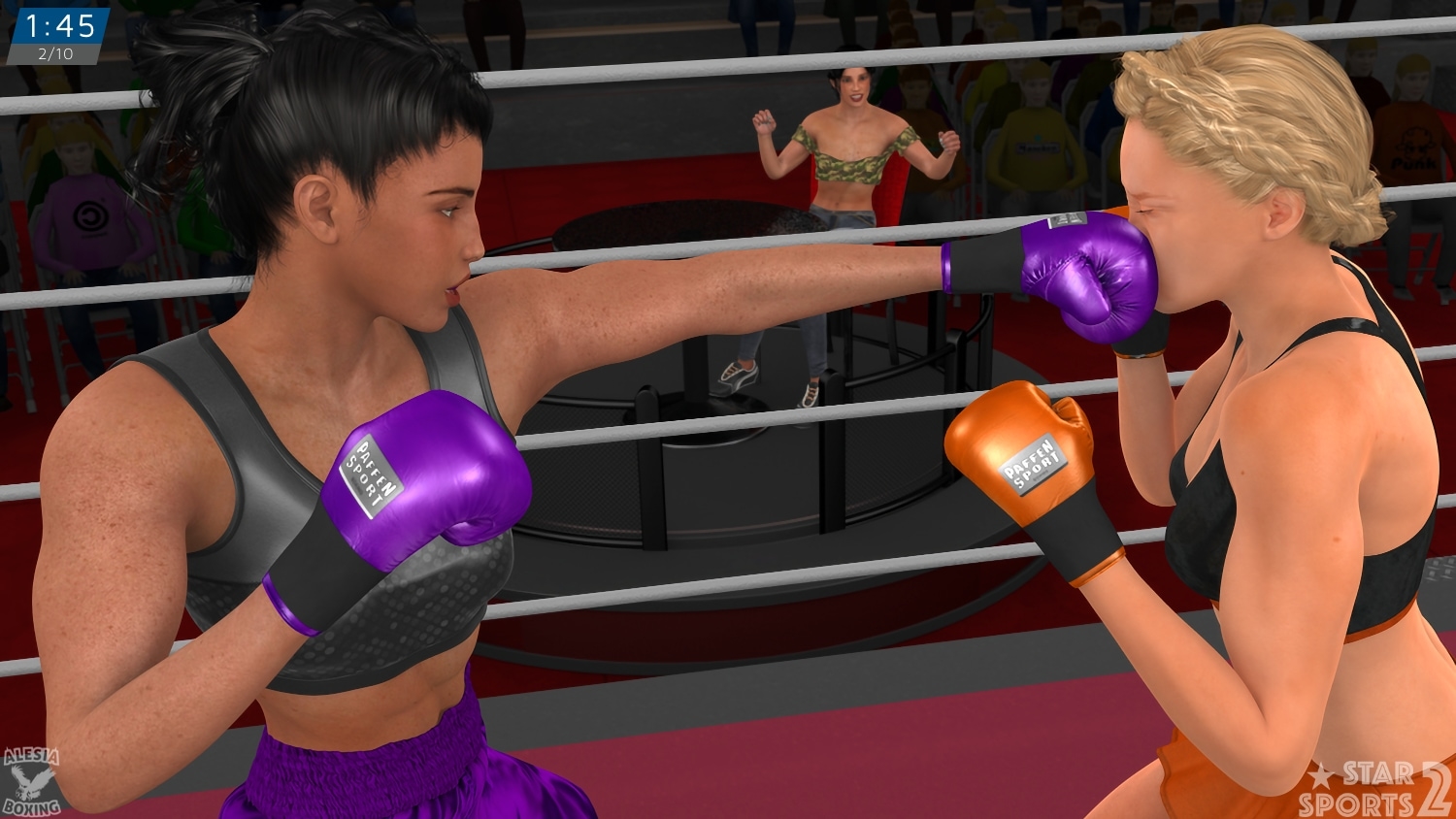 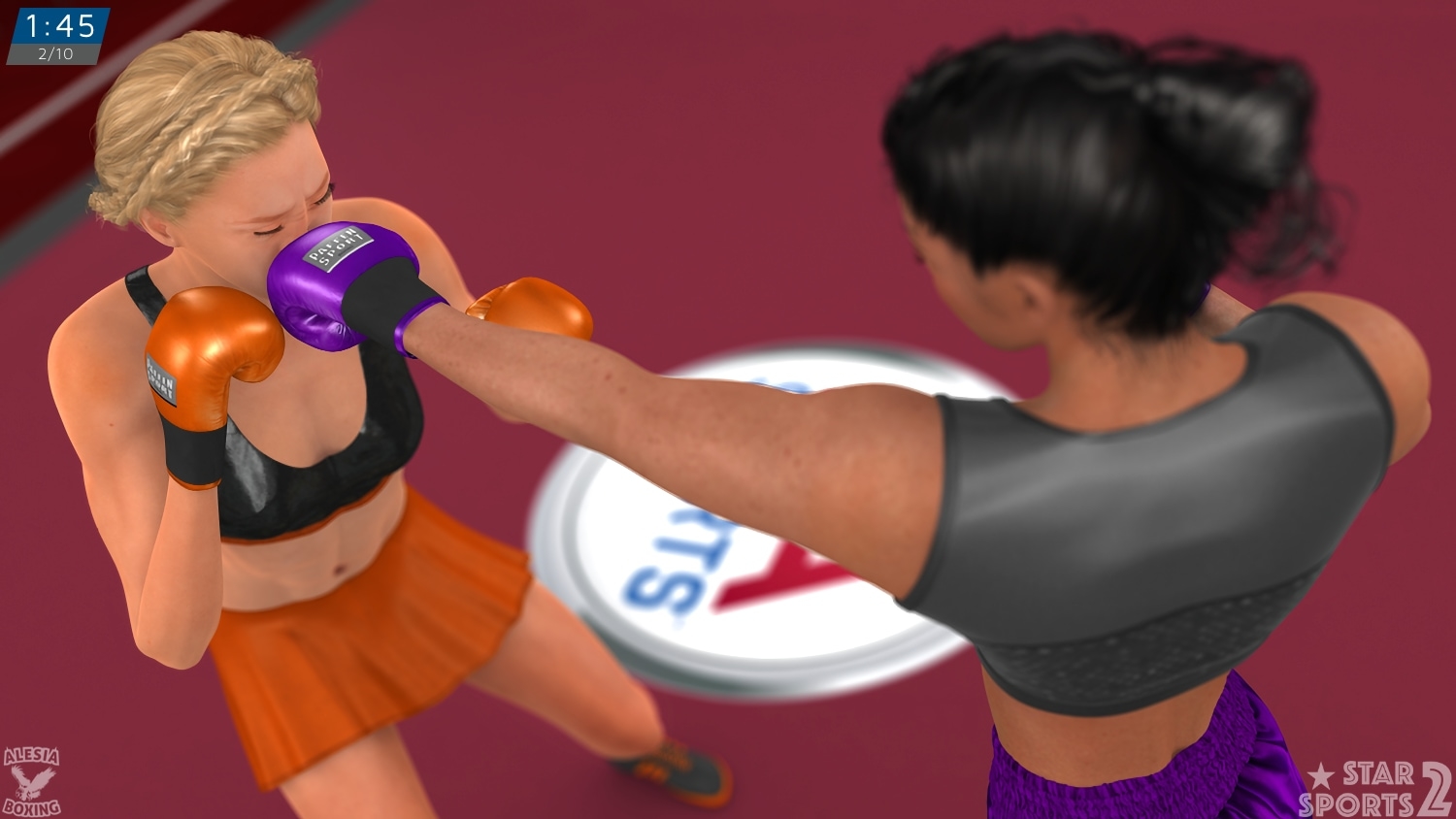 To the blonde’s surprise, that jab proves to be stiff and versatile enough to thrwart her. If she stands there, she gets it in the gloves or the middle of the face. When she throws a punch, it finds a gap somewhere. The purple leather doesn’t hurt so much but it’s like the pesky guard at the border: slows you down when you’re in a hurry. The difference being that Megan is eager to leave a “stamp” on Sophie’s passport.

The Queen of Brooklyn scores with a solid one downstairs after 30 seconds. Sophie goes headhunting with a right cross in the middle of the ring, and Megan “dives” in with a jab to the midsection.

Jim: “Thomas is regaining form after stumbling out of the gates. We know her as a hard puncher but she’s going for a slick routine here, Warren.”

Warren: “She doesn’t have much of a choice. Were she to try and trade with Schumann, she would put herself at risk. She might as well use the jab and try to outbox as advised by her corner. The last time the German got outplayed, she took a beating.” 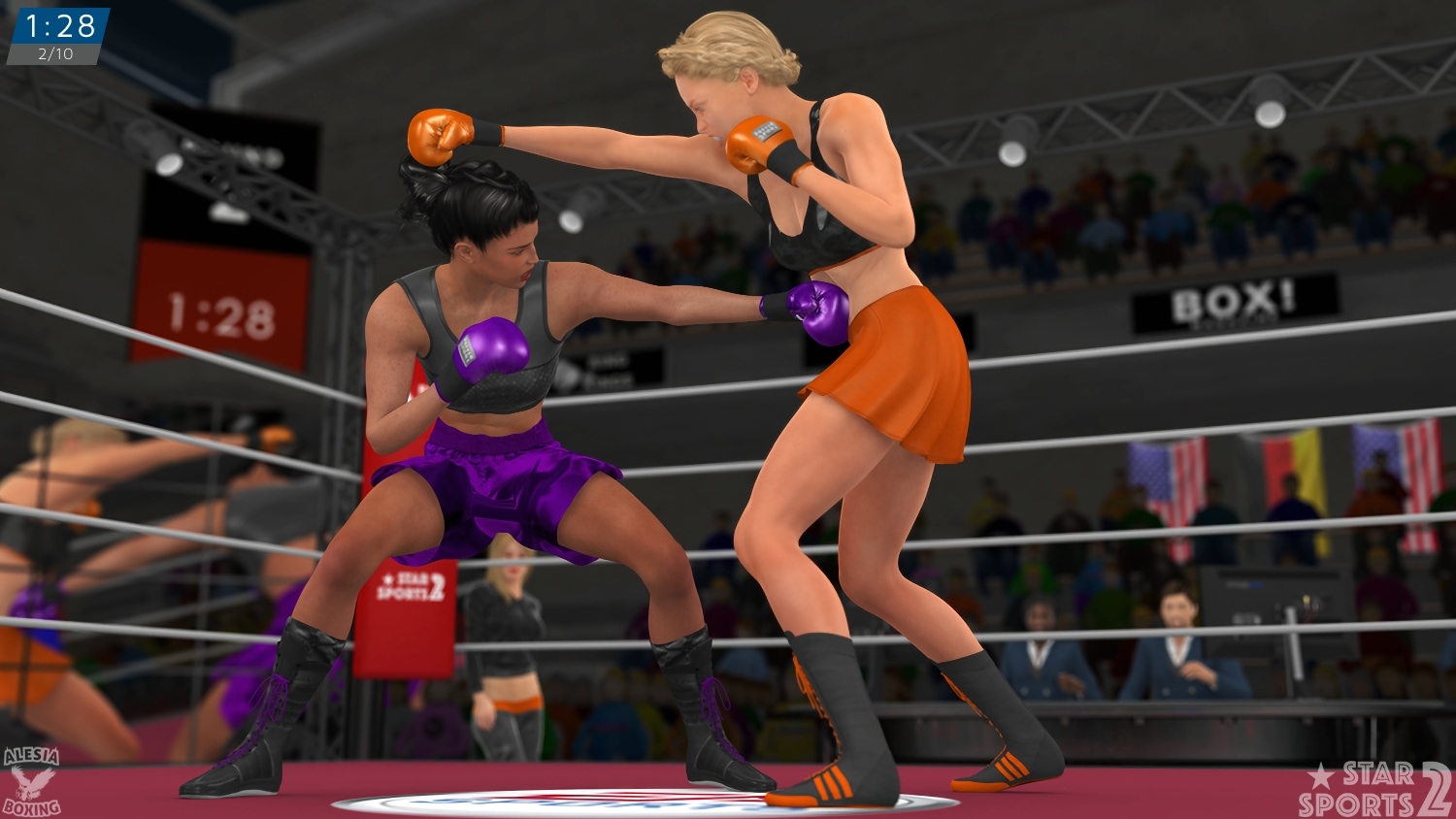 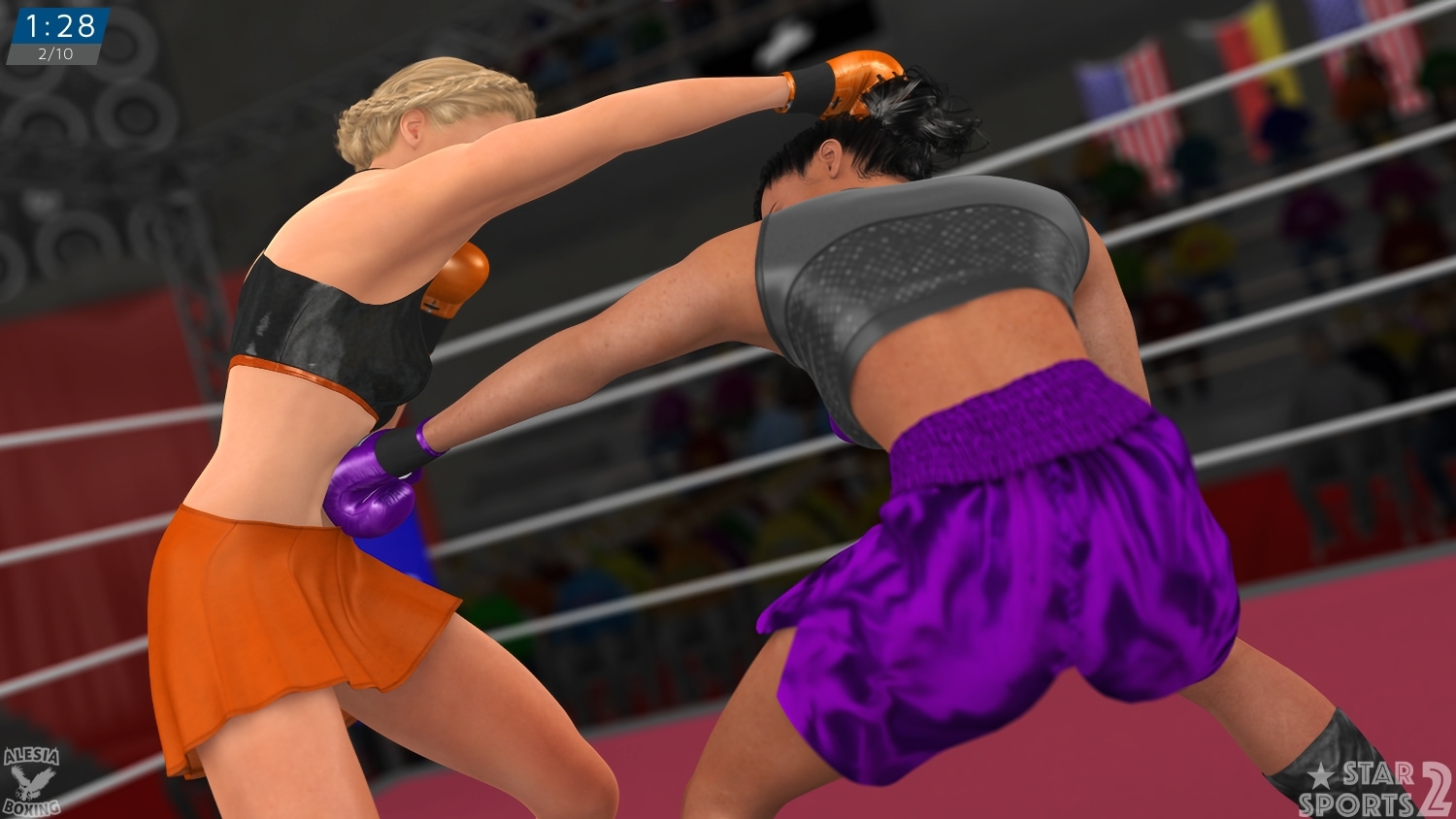 Stuck in the elevator

The American brunette resists charges and sends Sophie back with smart counters. It seems that Picasso can’t apply her brushes as she wishes, although she has been tasked with attacking in this round. Past the one-minute mark, she steps back and throws a long-range left hook, but Megan drives forward with a right hook to the body, square in the ribcage.

Megan thinks: “I like this. Maybe I can take time to work for once.” 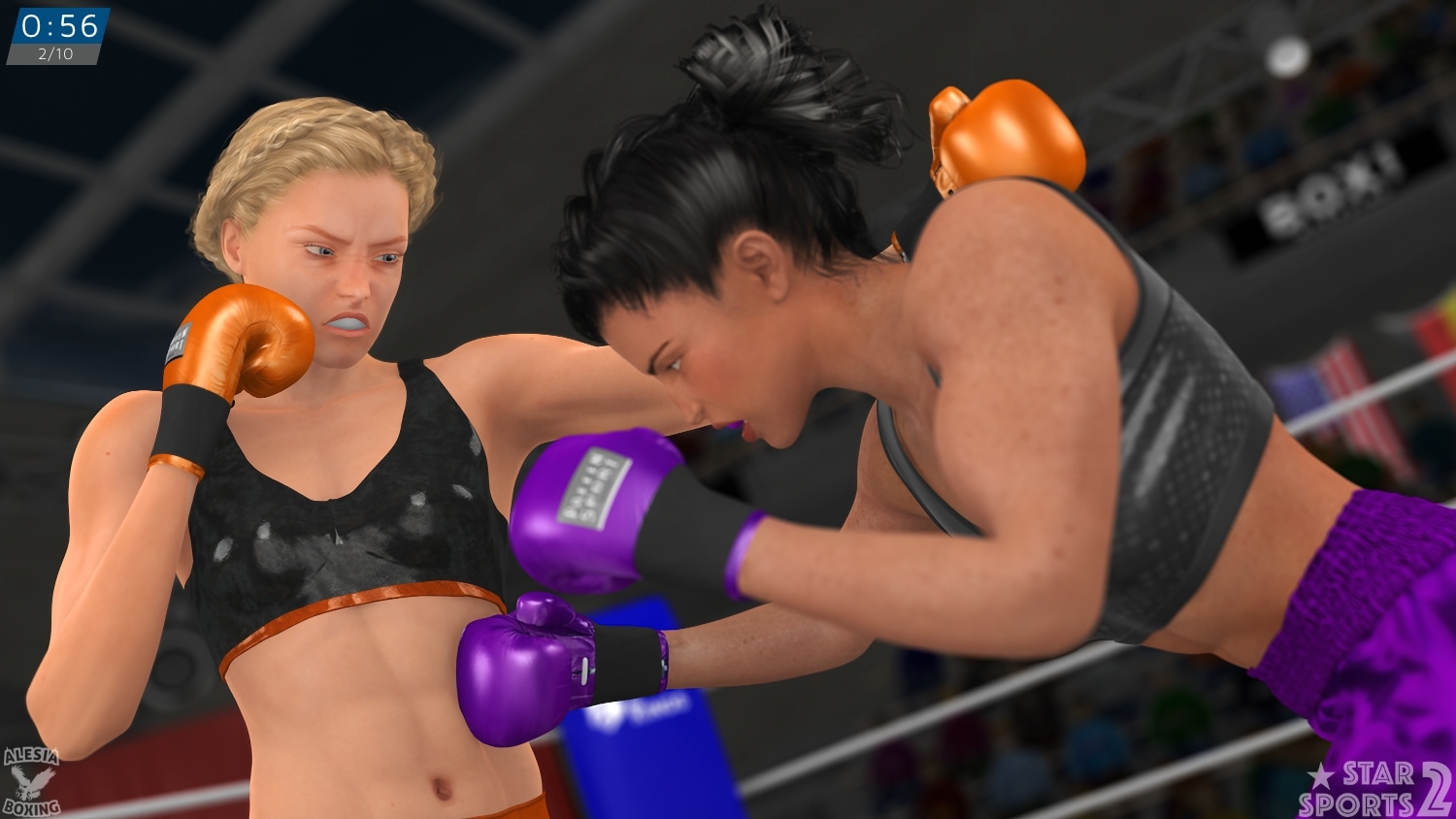 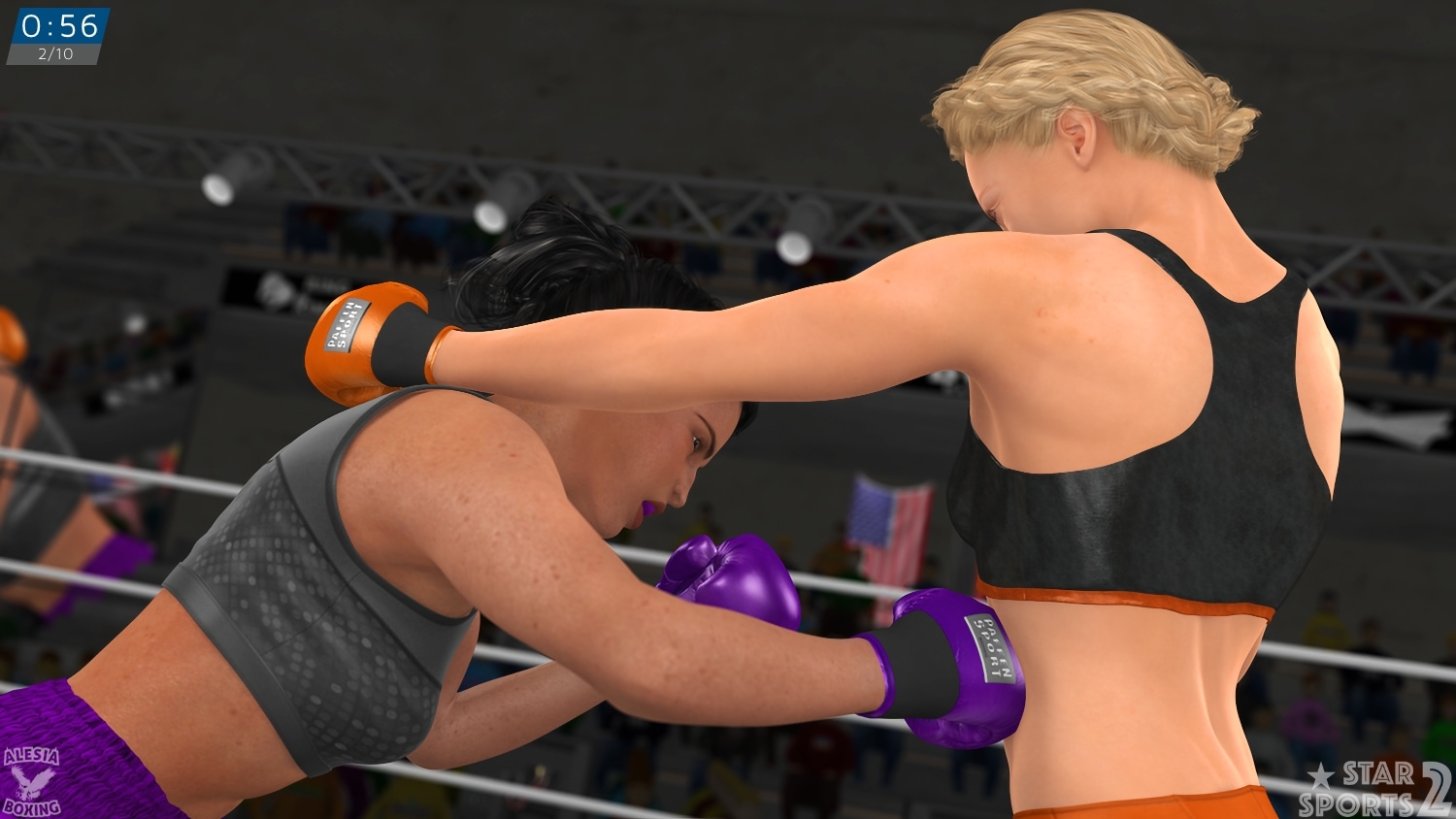 The black-haired beauty keeps Picasso under pressure. When you have the advantage, you want to press and keep your opponent bothered. The German finds this as comfortable as being stuck in an elevator. She takes some leather but avoids getting destroyed.

When the pair get to the ropes with increased pressure, though, the bitter orange gets zesty. Megan strikes her with a solid jab before looking to unload a right cross. Sophie pulls to the left when the American pivots. She gets enough distance and angle to find a blind spot and stick in a short left from underneath. A perfect strike. The orange glove crushes Megan’s right cheek. PISH!

Jim: “What a punch! Schumann was under the weather but her puncher’s instincts came through with a surprising and effective left that, if I may, have hurt Megan Thomas.”

Warren: “Awkward punch, awkward angle, real pain. It’s a warning to Thomas that she can’t afford to be too greedy.” 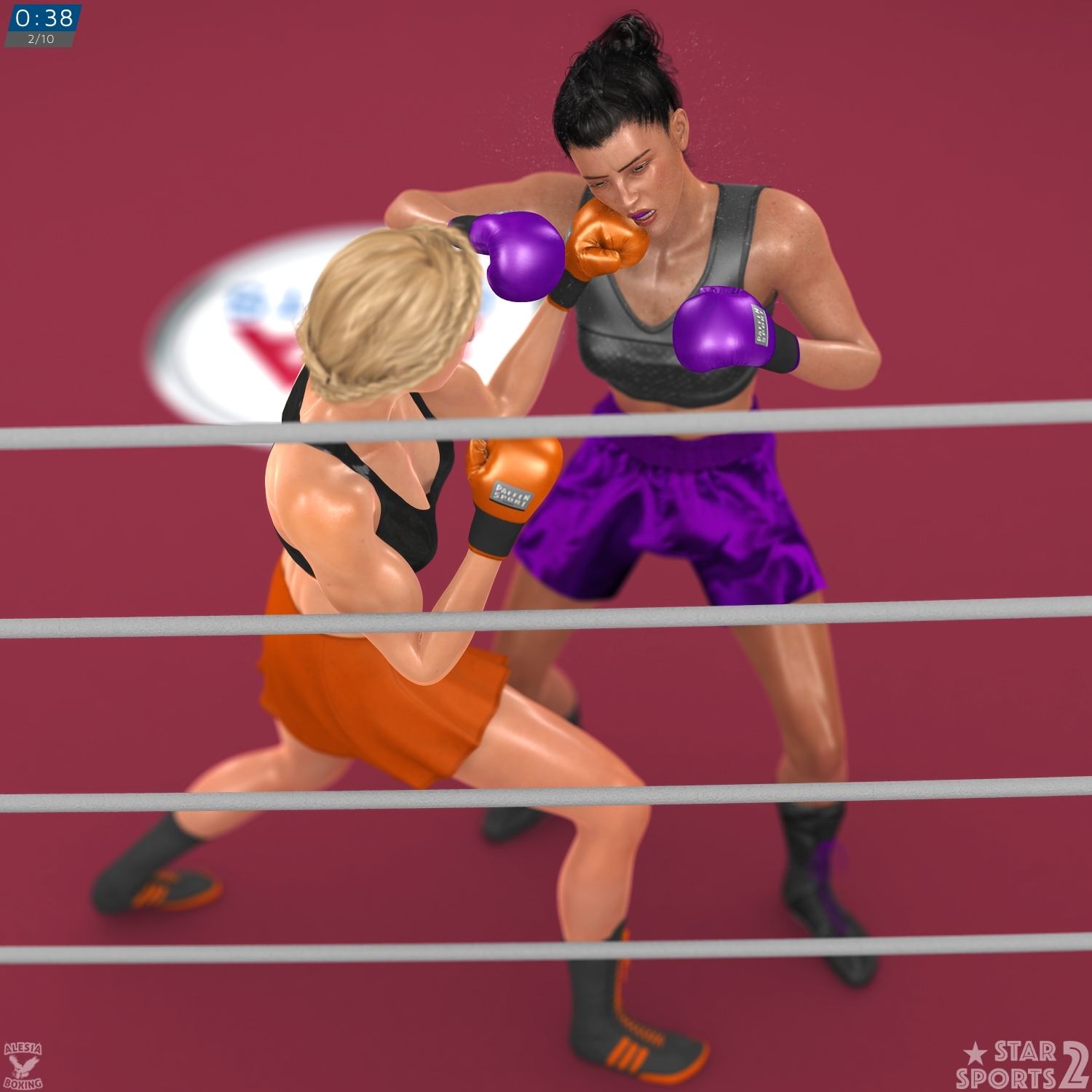 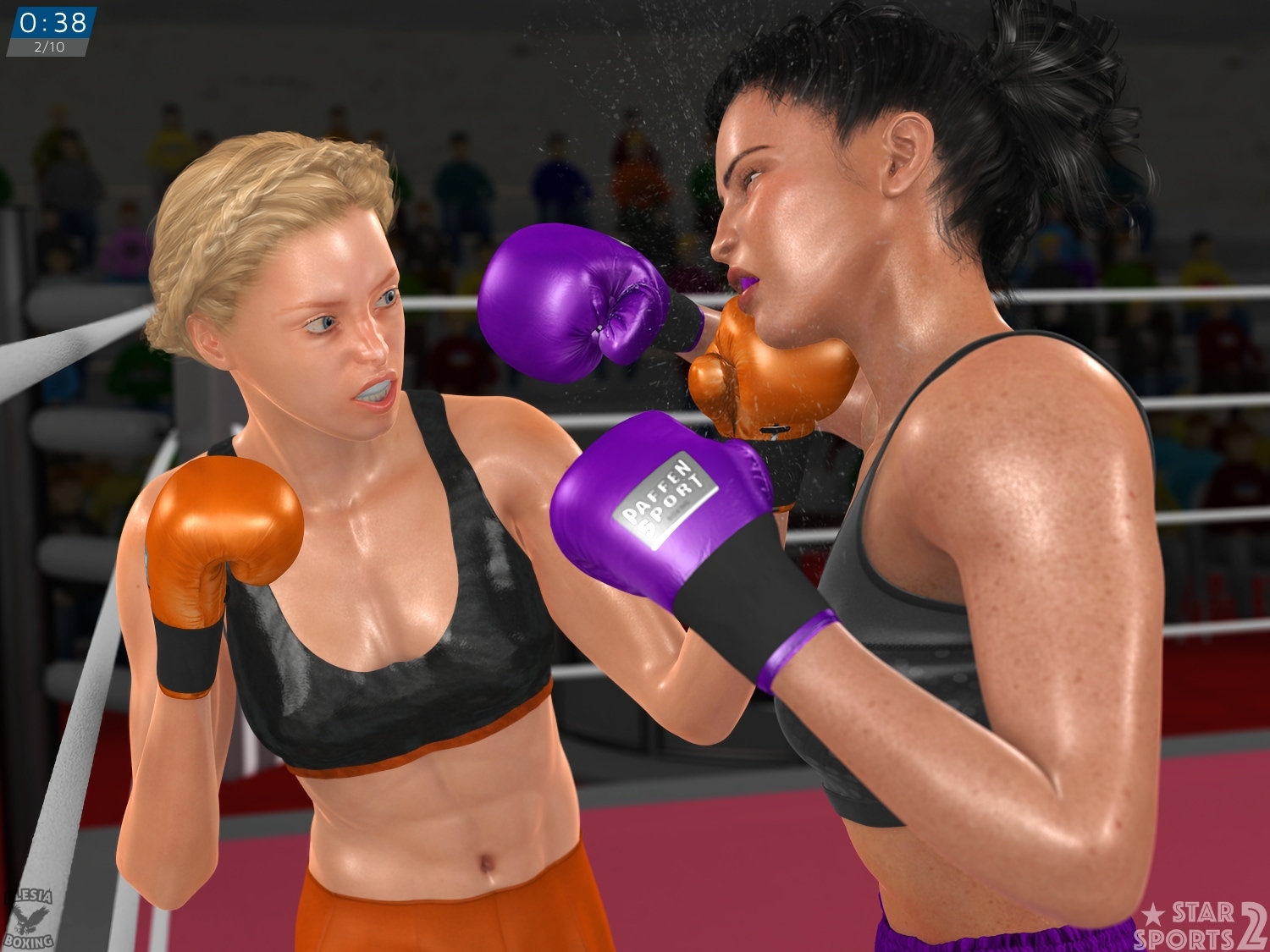 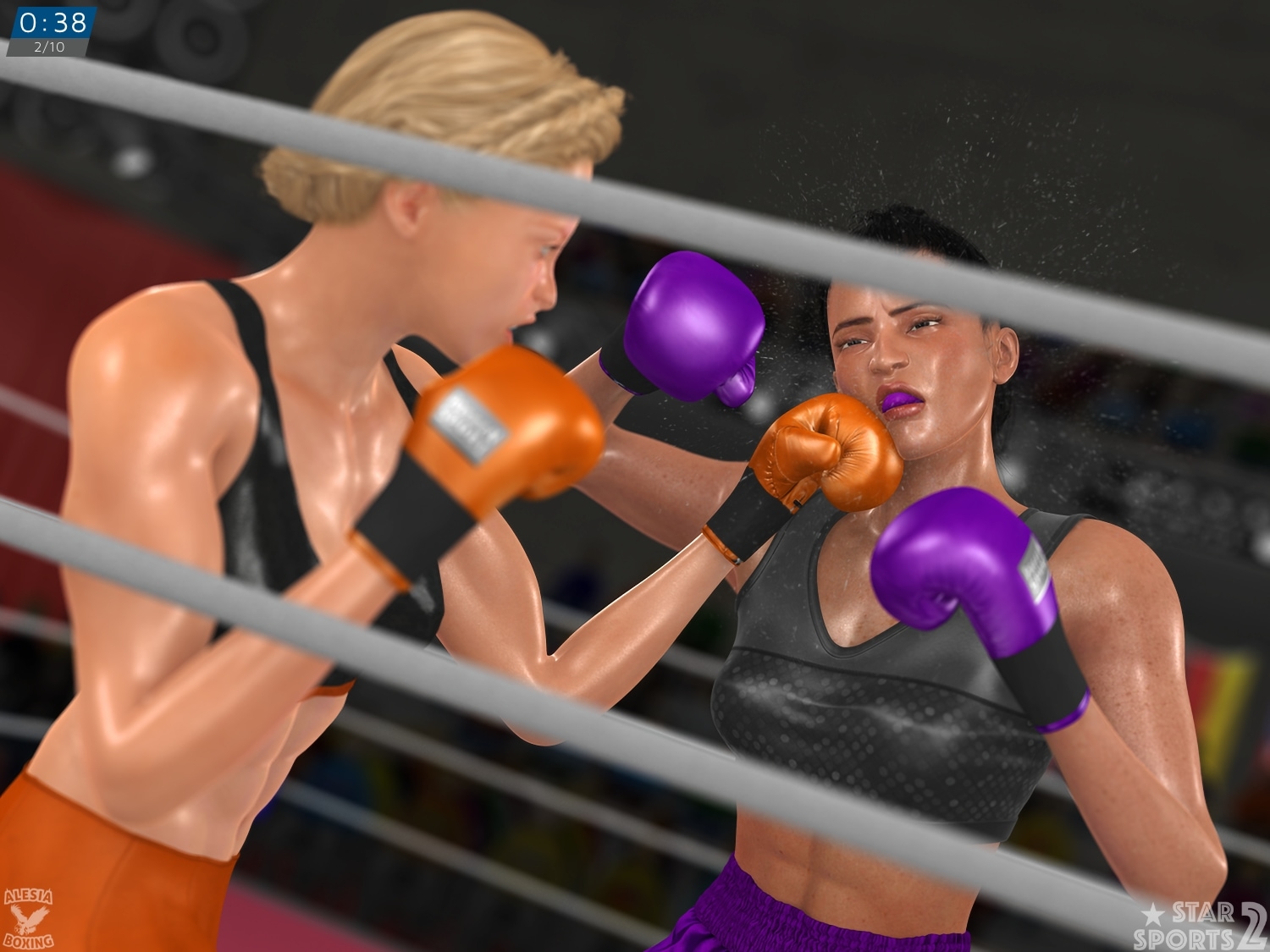 With her right cheek tingling, Megan heeds the warning. What a rhyme. She ducks under a right hand and pulls out.

Megan thinks: “She hits hard enough to hurt me. Won’t let it get to that, though.”

The American’s next effort is to piston the jab. Whenever the blonde gets close as she looks to attack, there’s a purple glove offering her a warm greeting. It’s especially annoying when you try to throw a slower punch like the left hook. 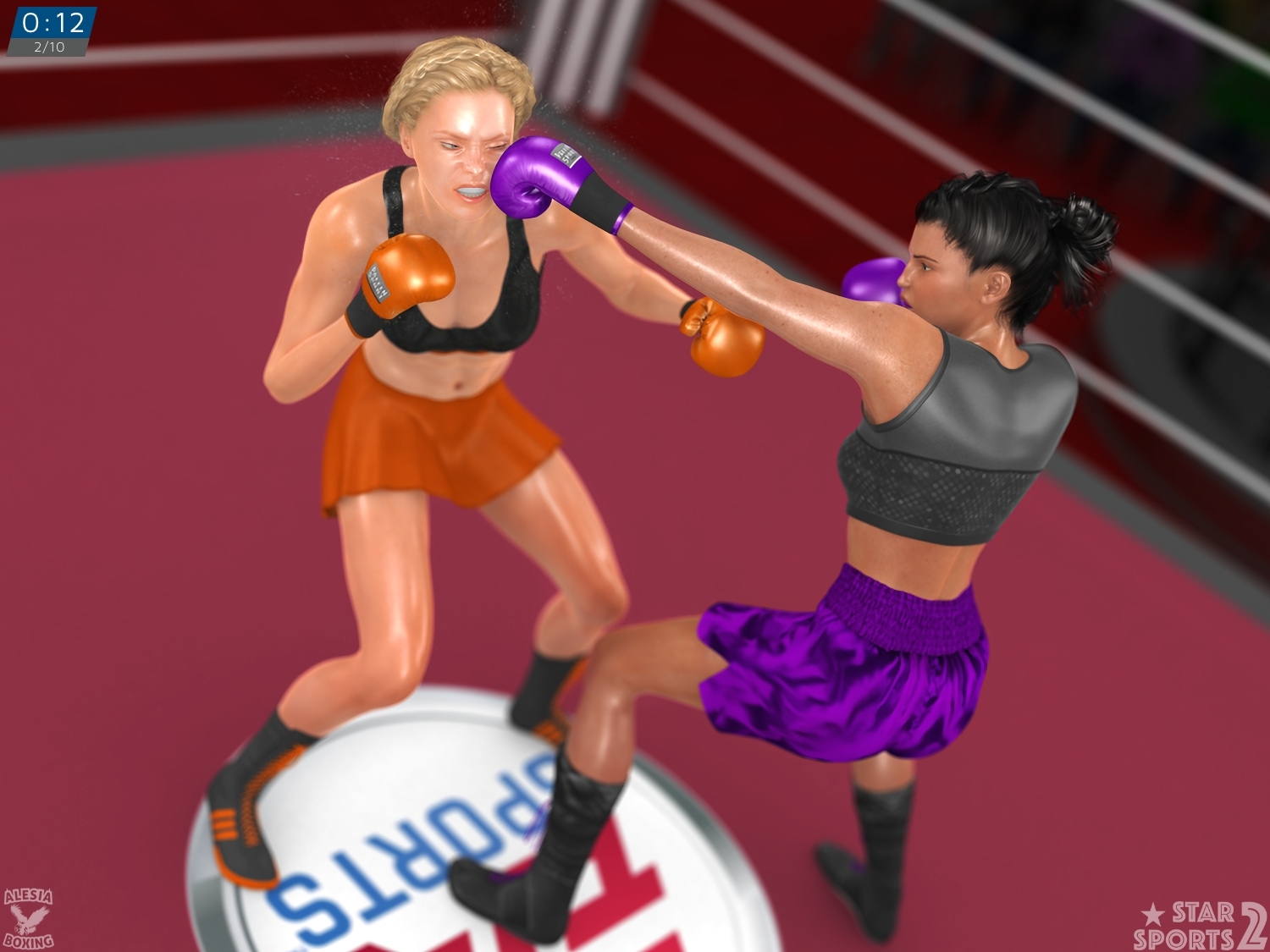 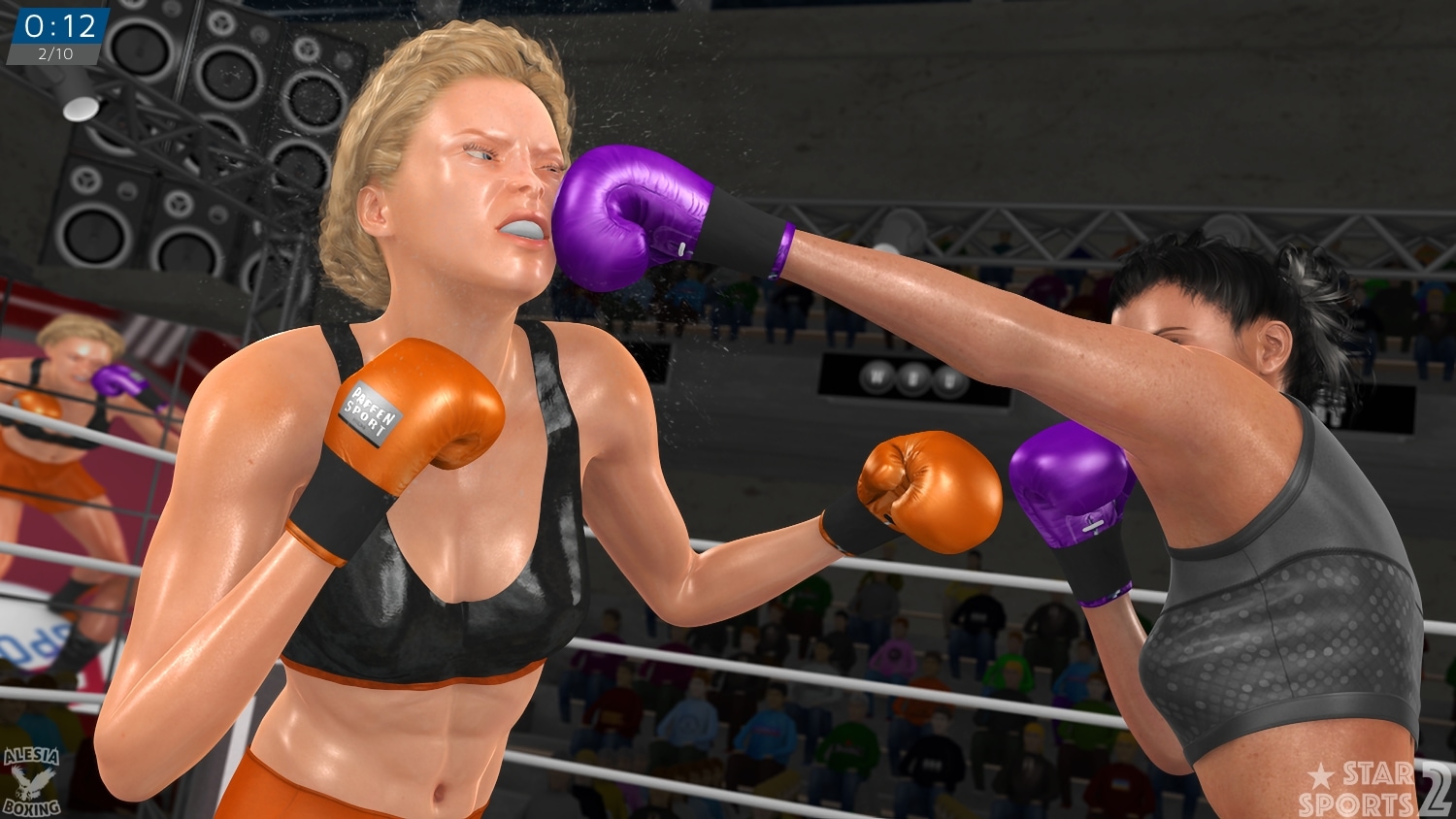 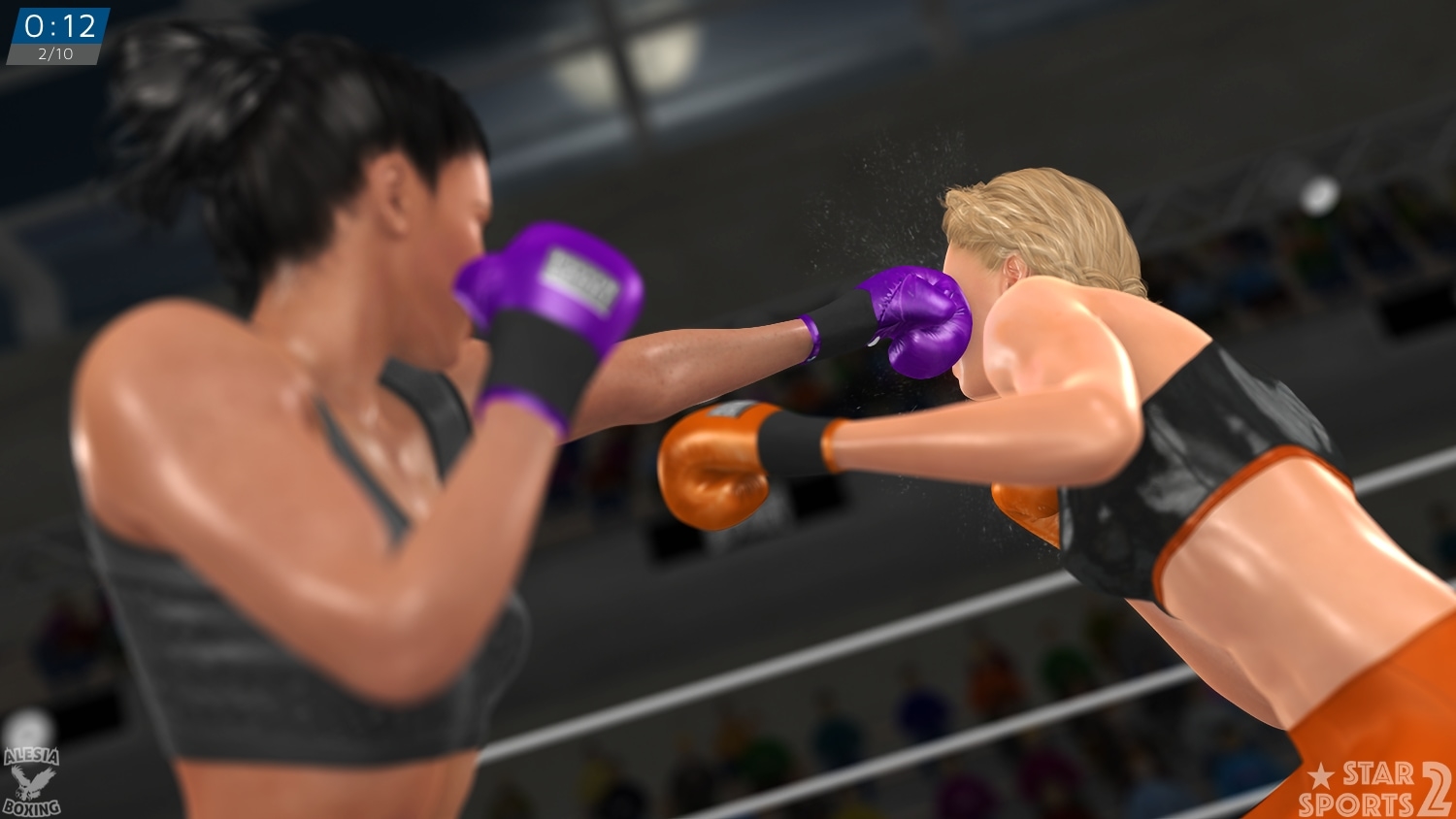 That jab really annoys Sophie, who finds Megan’s left glove too “interested” in pounding her flesh. The American is more daring in the final phase of the round, wanting to use that jab to set up a more convincing power shot to rock the boat and make a lasting impression.

The blonde elects to nullify that firepower with defensive moves. Just like her sister, she has a safety-first moment. It’s only the second round and it’s better to drop a round than to get dropped yourself.

In the final seconds, the orange menace is in the ropes but she’s not the menacing one. Megan is playing that role with a relentless jab that gives her control. She throws it at the chin, but the German ducks to the left. She is exposed to a right hand, but the bell rings in time for Megan not to throw it.

Jim: “This is a Megan Thomas round as far as I am concerned. She bossed it with the jab, and Schumann didn’t have a clear answer to offer to the American champion.”

Warren: “Indeed. However, we can assume that her coach will have words and potentially a solution to her problems.”

Chelsea: “What do you think?” 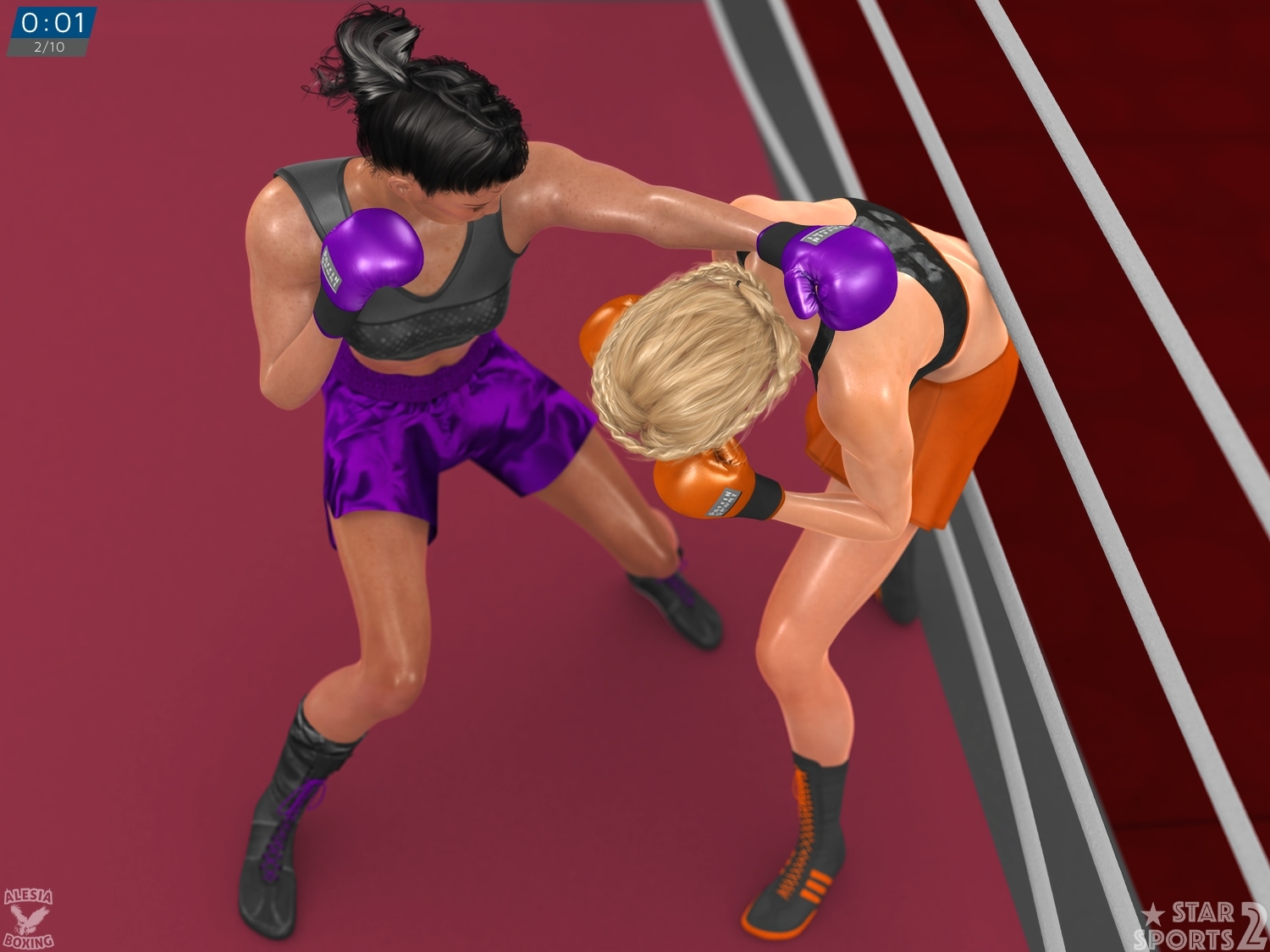 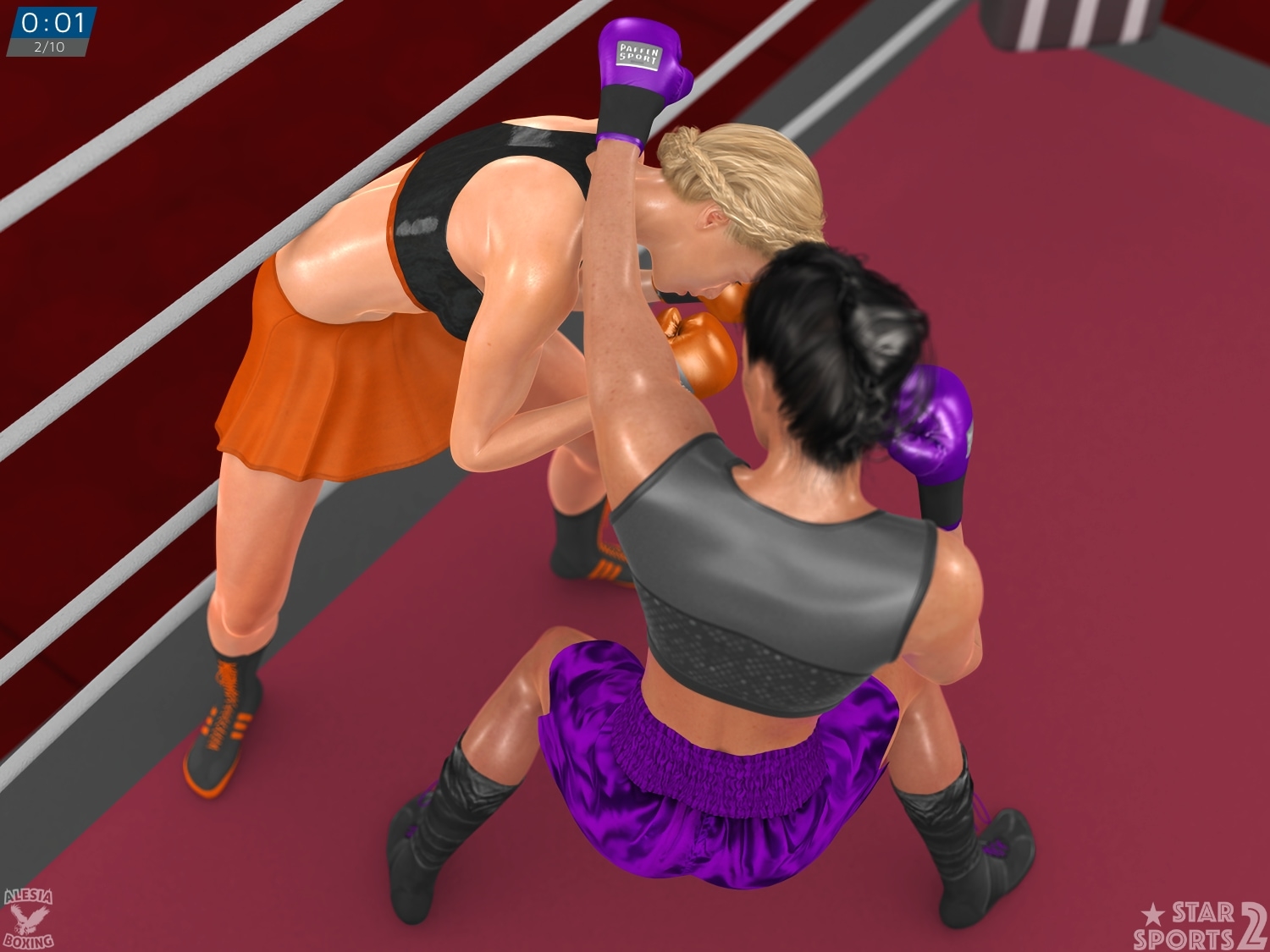 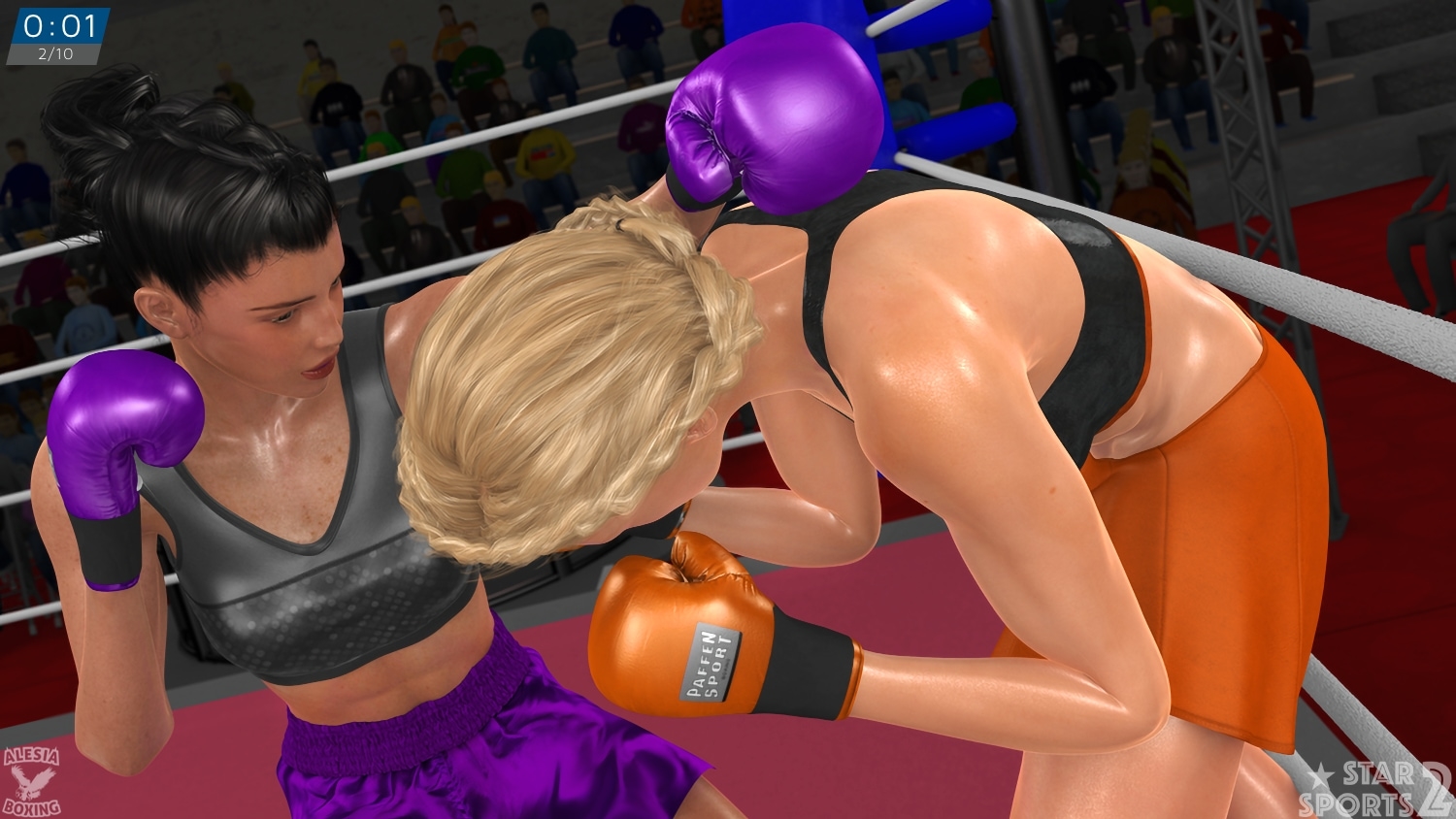 We go to the corners from the referee’s point of view.

In the red corner, Regina is not satisfied, but she doesn’t give her protégée a lecture.

Regina: “She carried that one. We need to make a small adjustment. I want you to stand a little closer to her to deny the distance needed to deploy that jab. Gotta be inside with your low stance instead of backing up. Throw punches from angles. You scored with that left hand, just like I’d like you to do. Alright?”

The coach then greases up the skin under her left eye since she sees a red mark.

Regina: “It’s coconut butter. Wladimir Klitschko recommended it to me because it’s a little better than vaseline.” 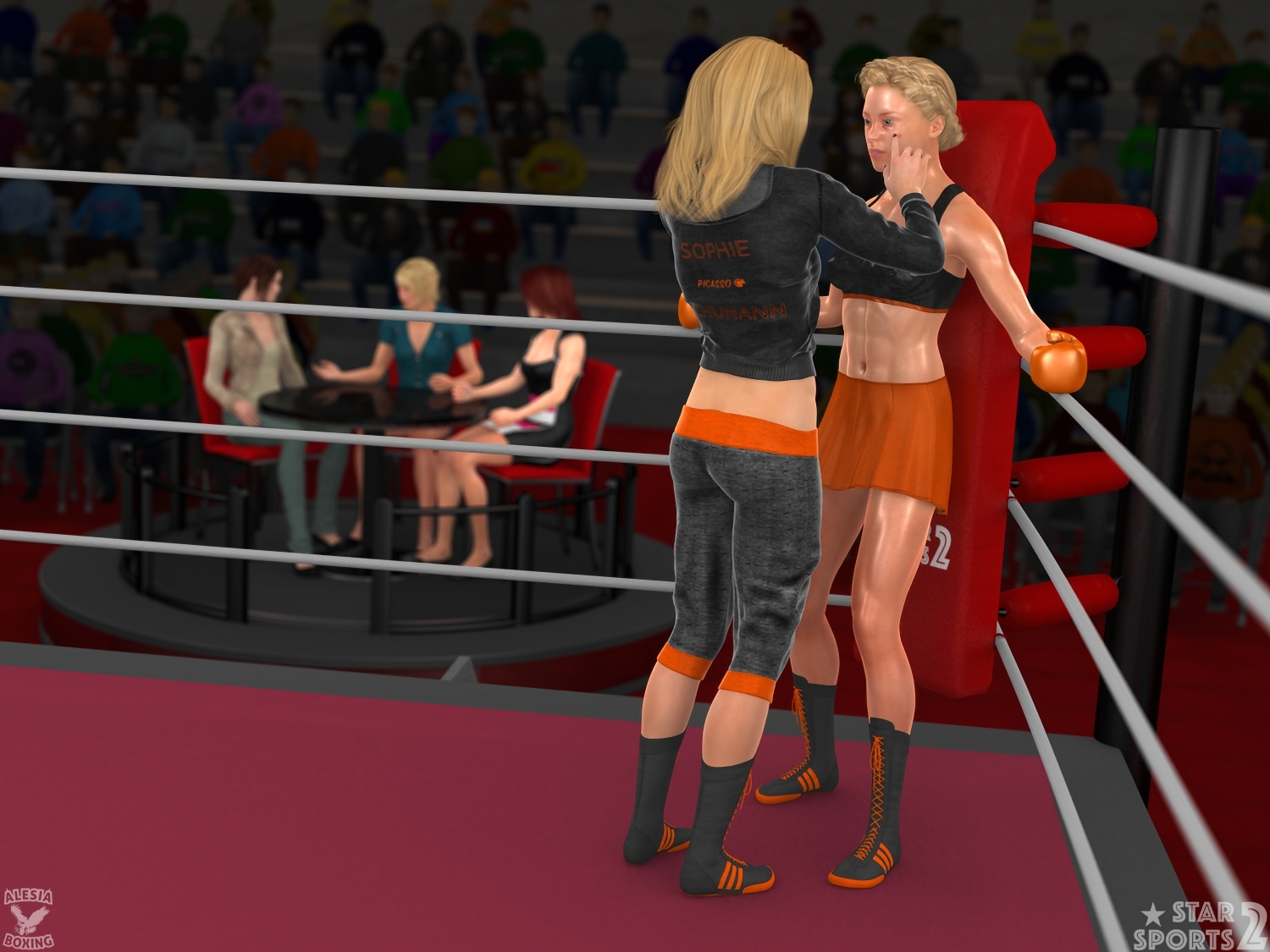 Across the ring, Joseph Forrest is happy and he wants more.

Joseph: “Alright, chica. Good job jabbing her into irrelevance. Outboxing the puncher is the thing. Now, I want you to crank up the pressure a little to land more power shots. Don’t look for the knockout just yet. Let’s take our time and do a professional job. Doesn’t matter when we finish her. It’s about how we do it.” 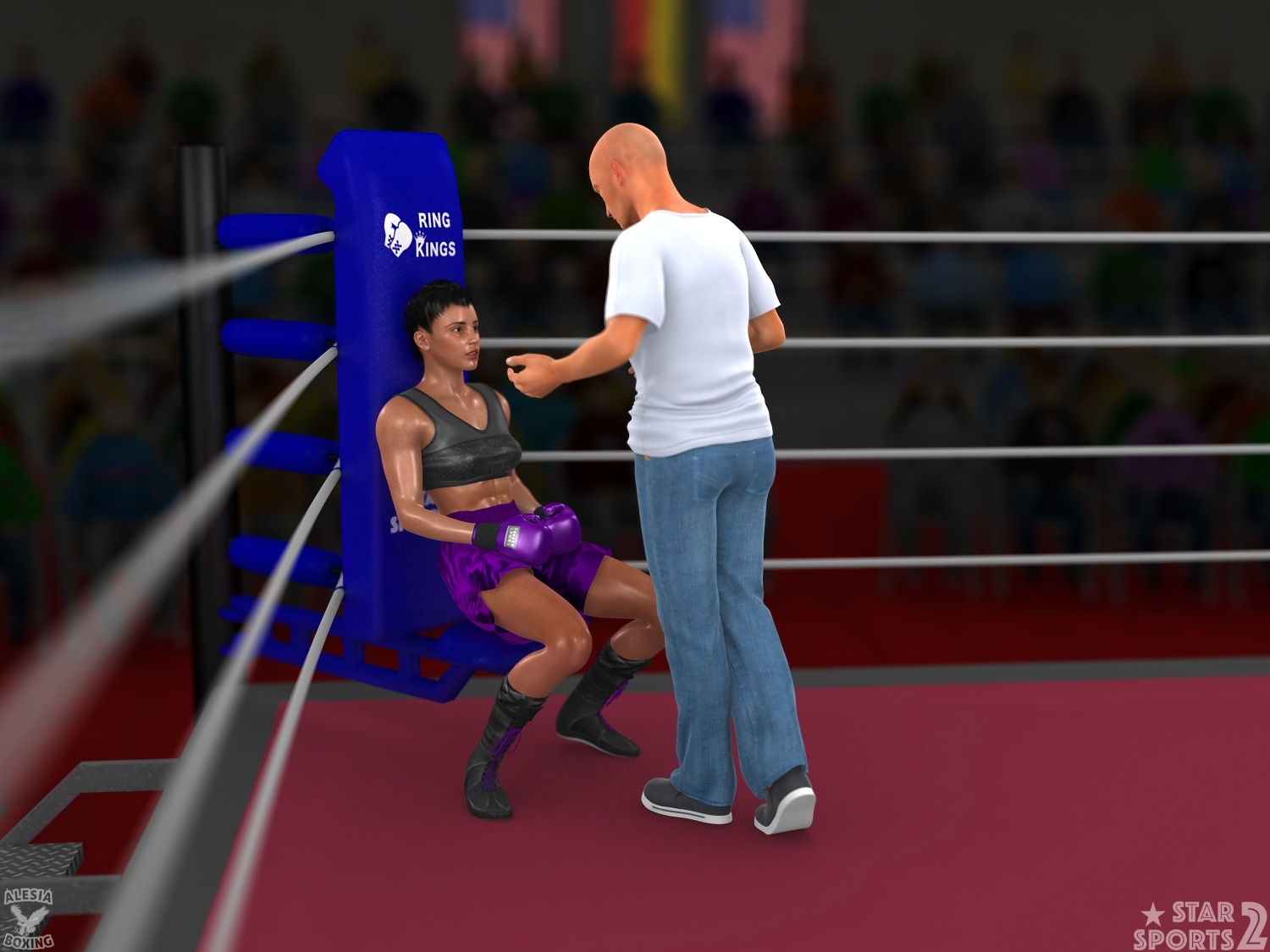 Chelsea: “Alright. Not her round. She can get back into it, though.”

Alesia: “Yeah. I’m not worried. As long as she doesn’t drop too many rounds, she won’t need to take unnecessary risks.”

Akane: “I really wanna see her win that fight and become famous.”

Alesia: “Then, Chelsea can take on Megan and give her a beating. I liked that face shove at weigh-in! Now I fancy seeing you tackle anyone.”

Chelsea: “Haha! I made a reputation with these tackles.”

Jim: “While the women are ringside are having fun, we have some reporting duty. Your scorecard after two rounds, Warren?”

Warren: “It’s even at 19-19. Miss Jabalot did a fine job taking the second after dropping the first. She may have her tactical limitations, but she looked good out there, and is looking to build upon that soon.” 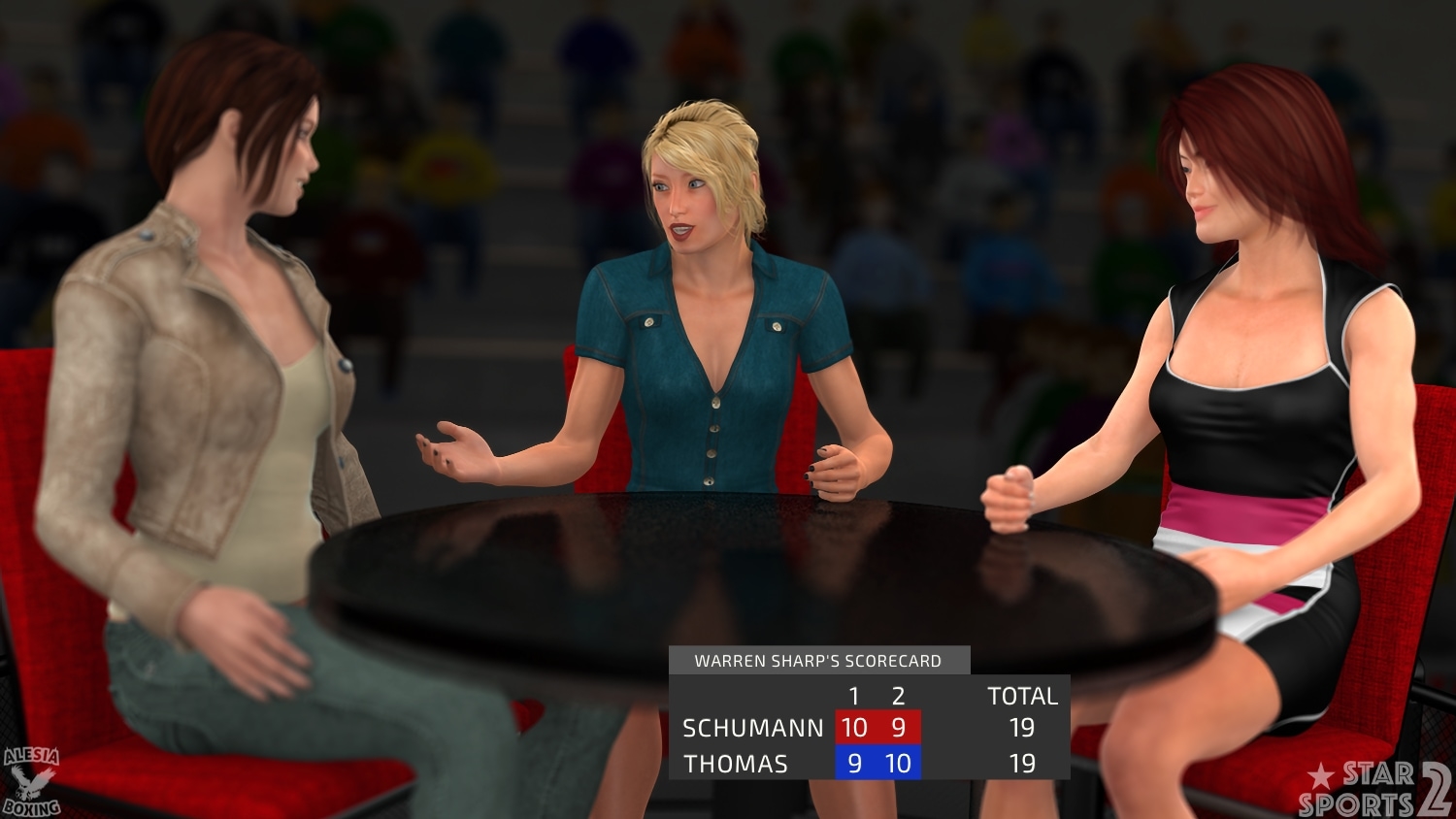 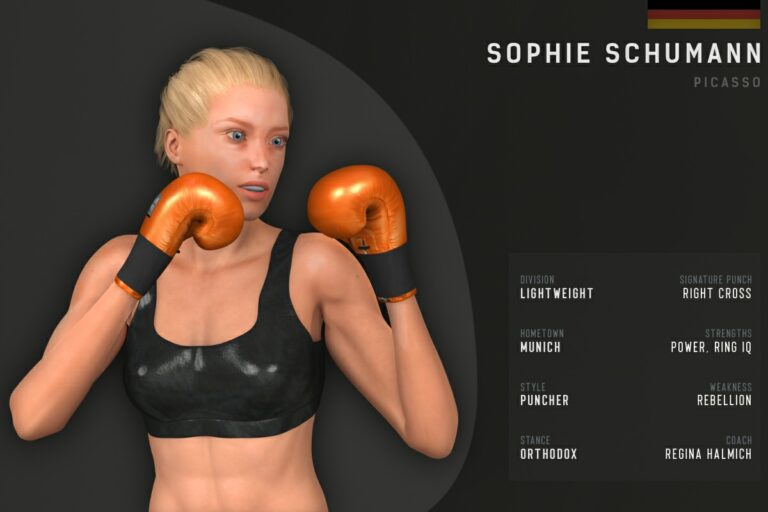