Emma starts off the fifth round on the front foot, and this change from a passive to an aggressive fighter takes Mechelle by surprise. The fighter in red and black does well not to get overwhelmed or take a massive punch from Emma, but she does take a couple of clean shots.

When Mechelle tries to gain back the upper hand in the round, or at least slow down Mechelle with the jab, she finds that she’s been beaten to the punch as she absorbs a strong jab to the body from Emma McGale. The Peach gets Mechelle at full extension, a lovely jab from the brunette.

Chantal: “McGale may not be bulling Mechelle inside like she might have wanted to at the start of the fight, but she is boxing with much more confidence in this round than any of the few previous rounds. McGale may have been knocked down, but Gauthier will have to produce something special to stop her.” 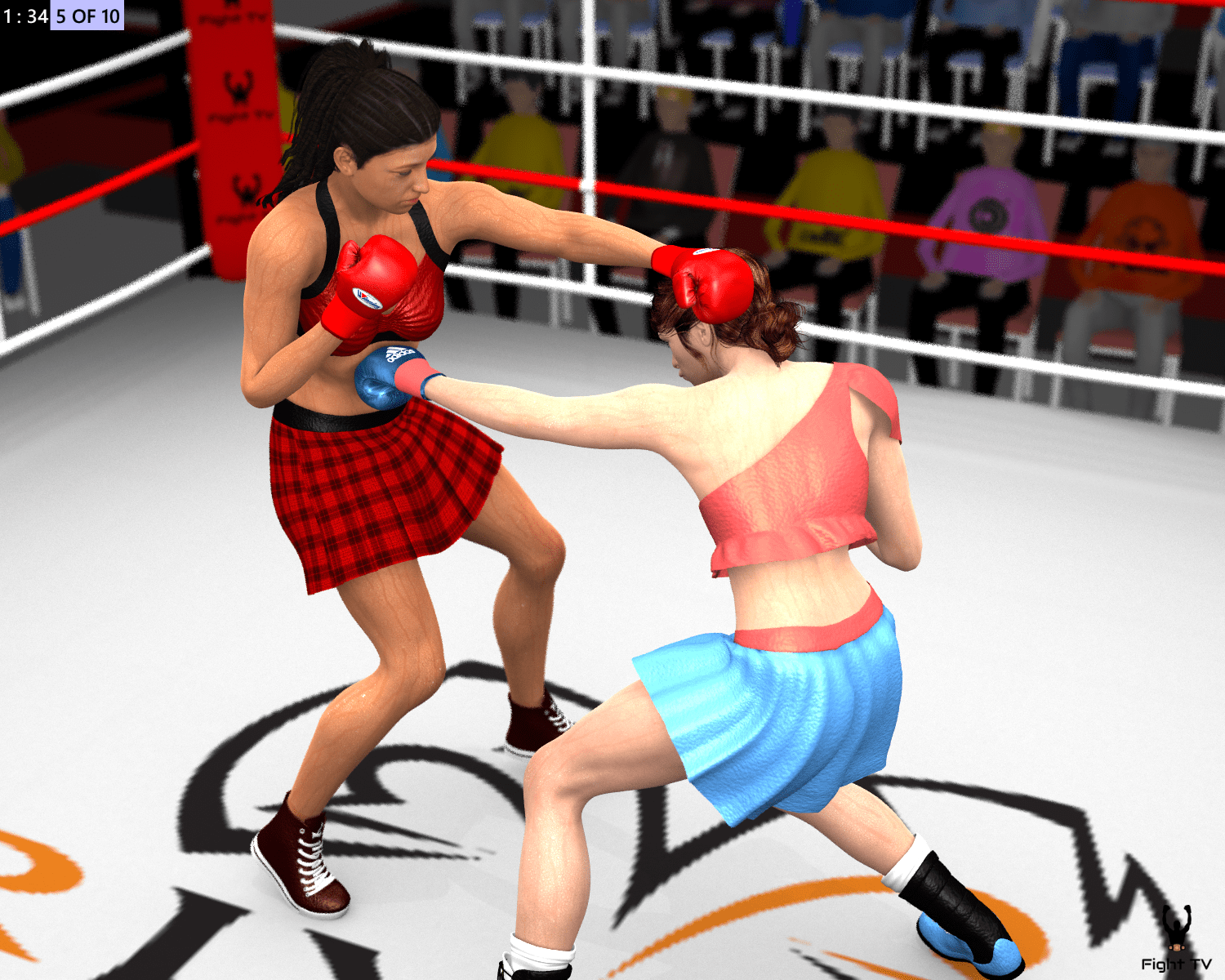 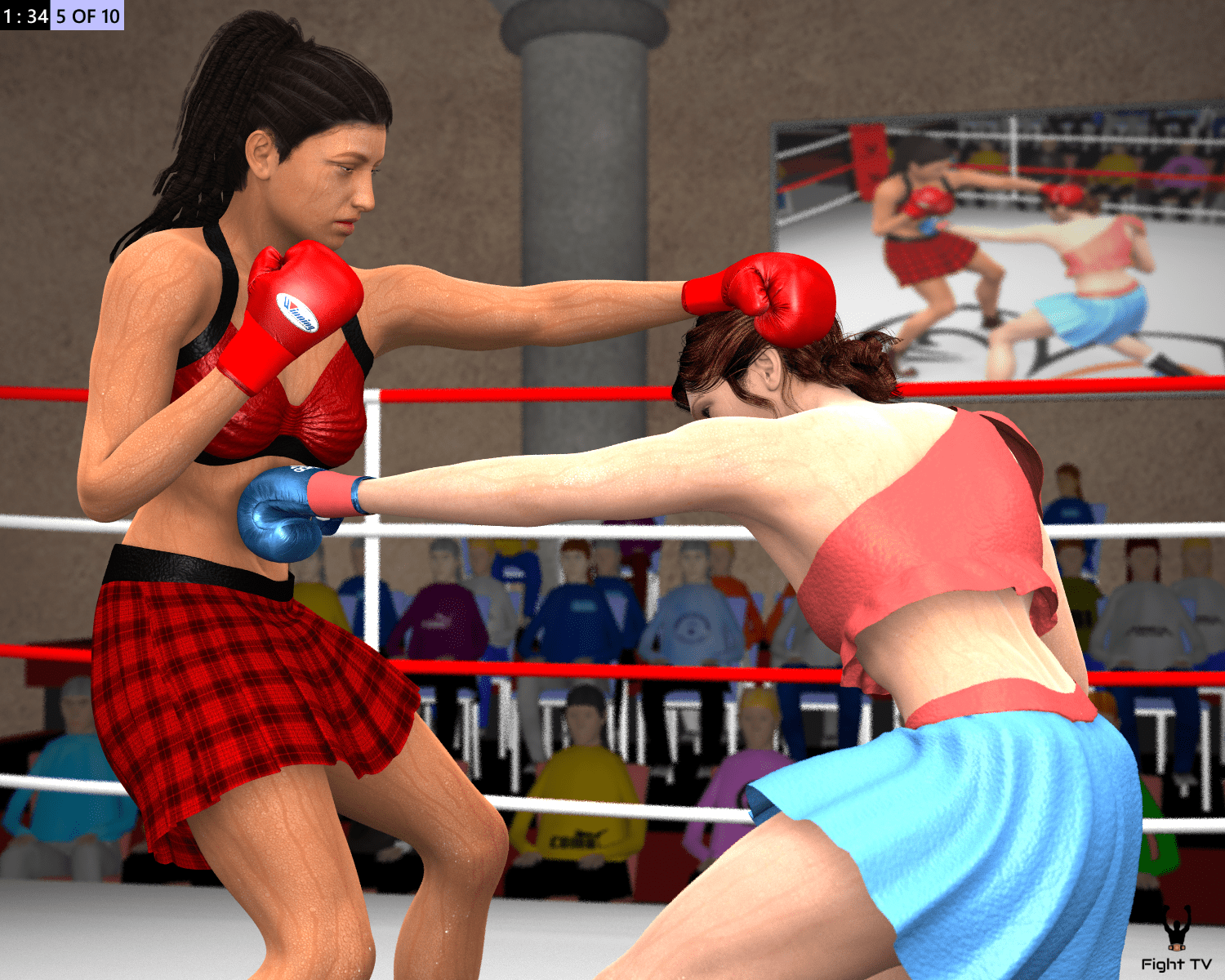 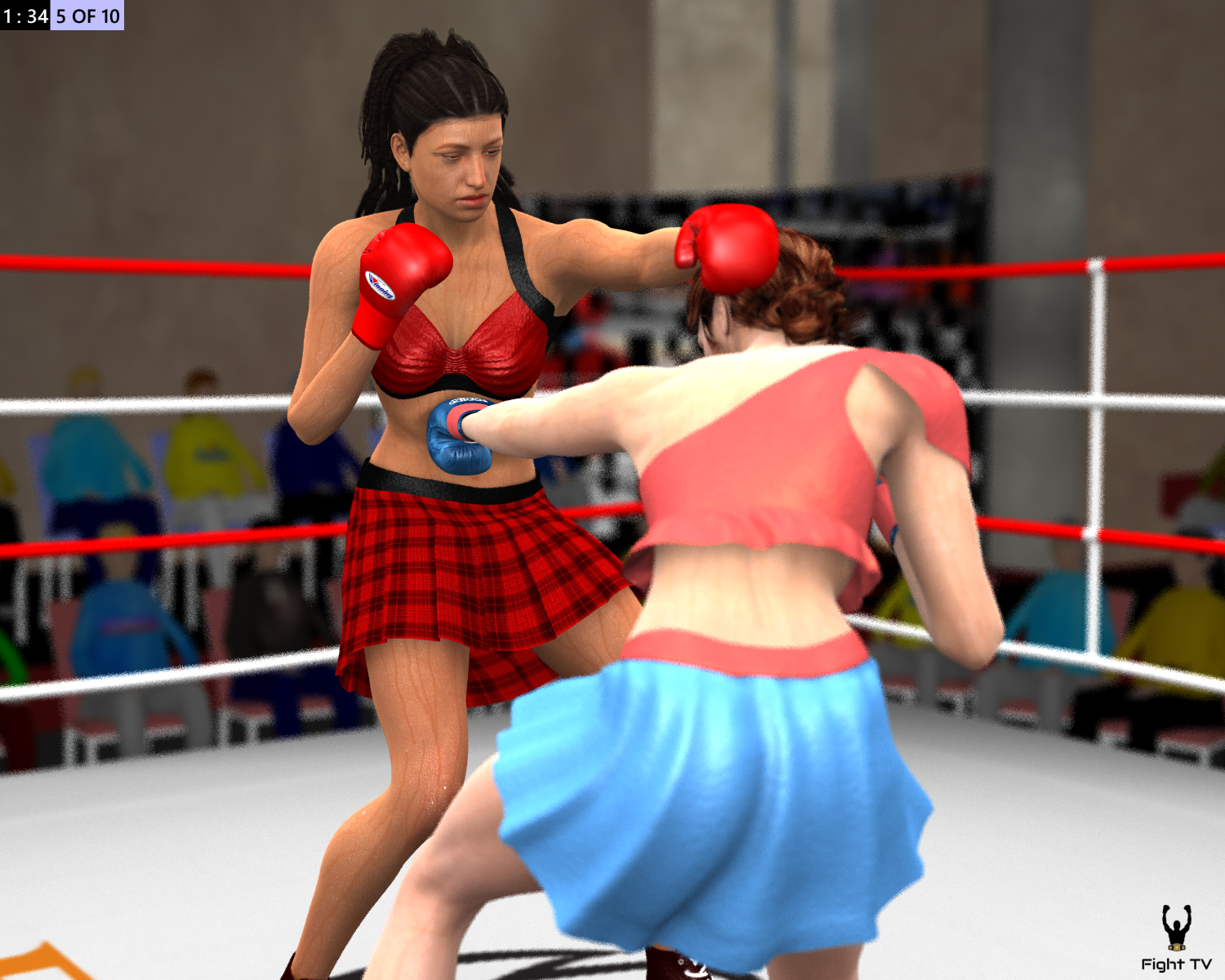 The Pretty Warrior is none too pleased with this turnaround, but she doesn’t have much success in stopping it. She’s getting cleanly outboxed here in the fifth and her right hand cannot find much purchase anymore, as Emma seems to have gotten her timing down.

McGale keeps a tight guard, but her increased upper body movement makes it difficult for Mechelle to get that red leather to mark up The Peach’s cute face.

Chantal: “Though this fight has been more of a slugfest, McGale shows that she isn’t a one dimensional fighter here, as she makes Mechelle swing and miss like the Montreal Expos.”

Emma thinks: Remember I sparred against you in the past Mechelle? Remember how I always won? Maybe now you might. 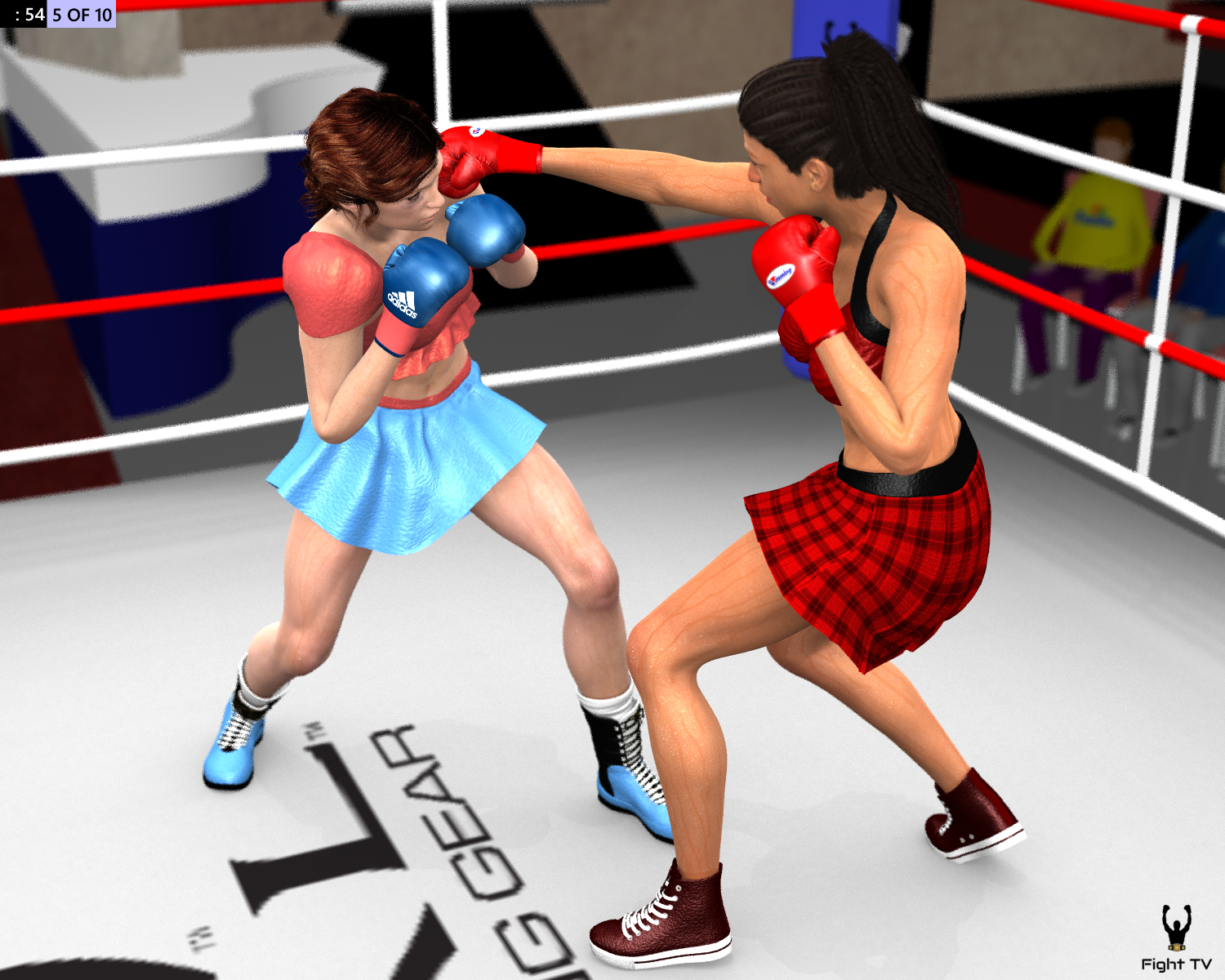 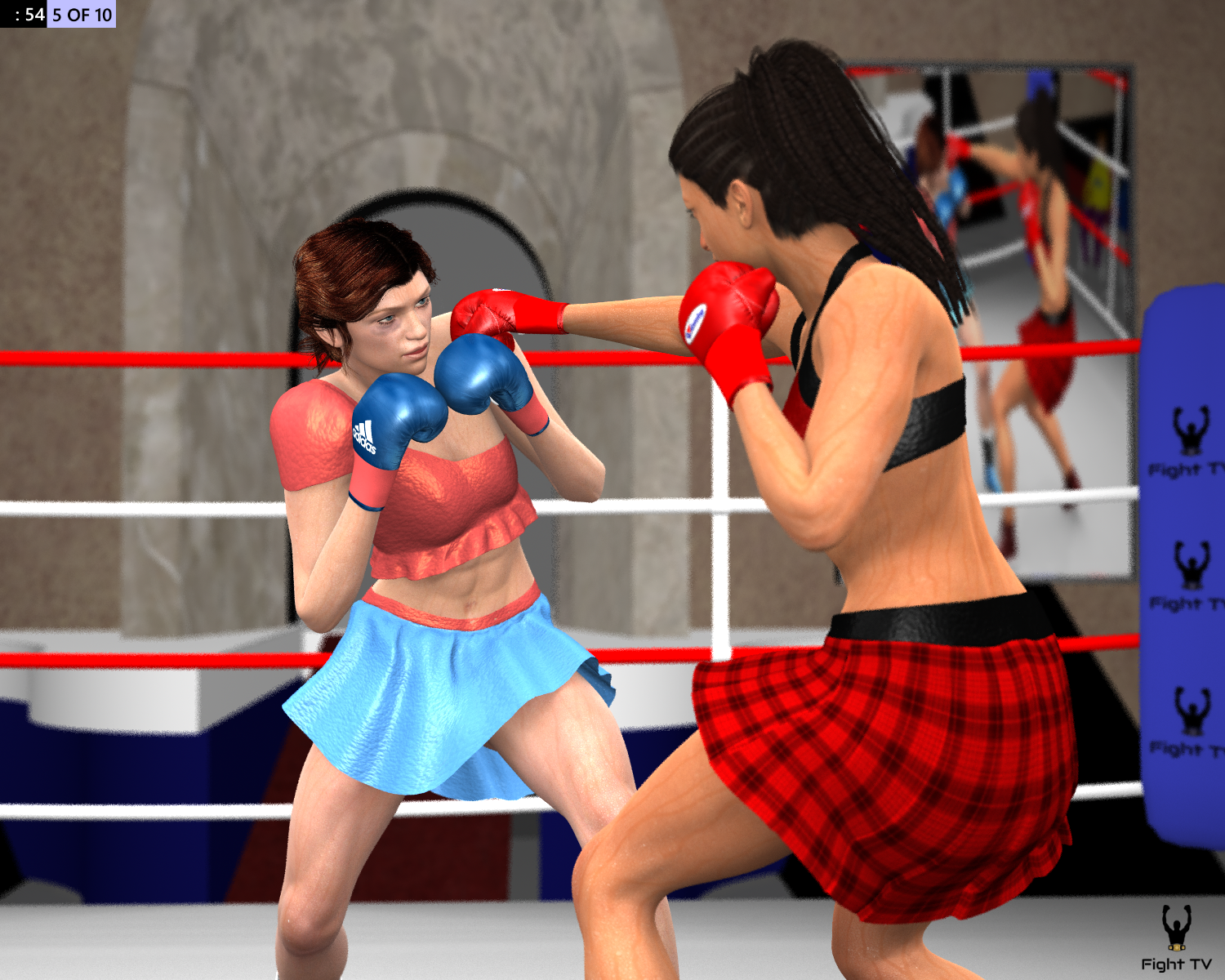 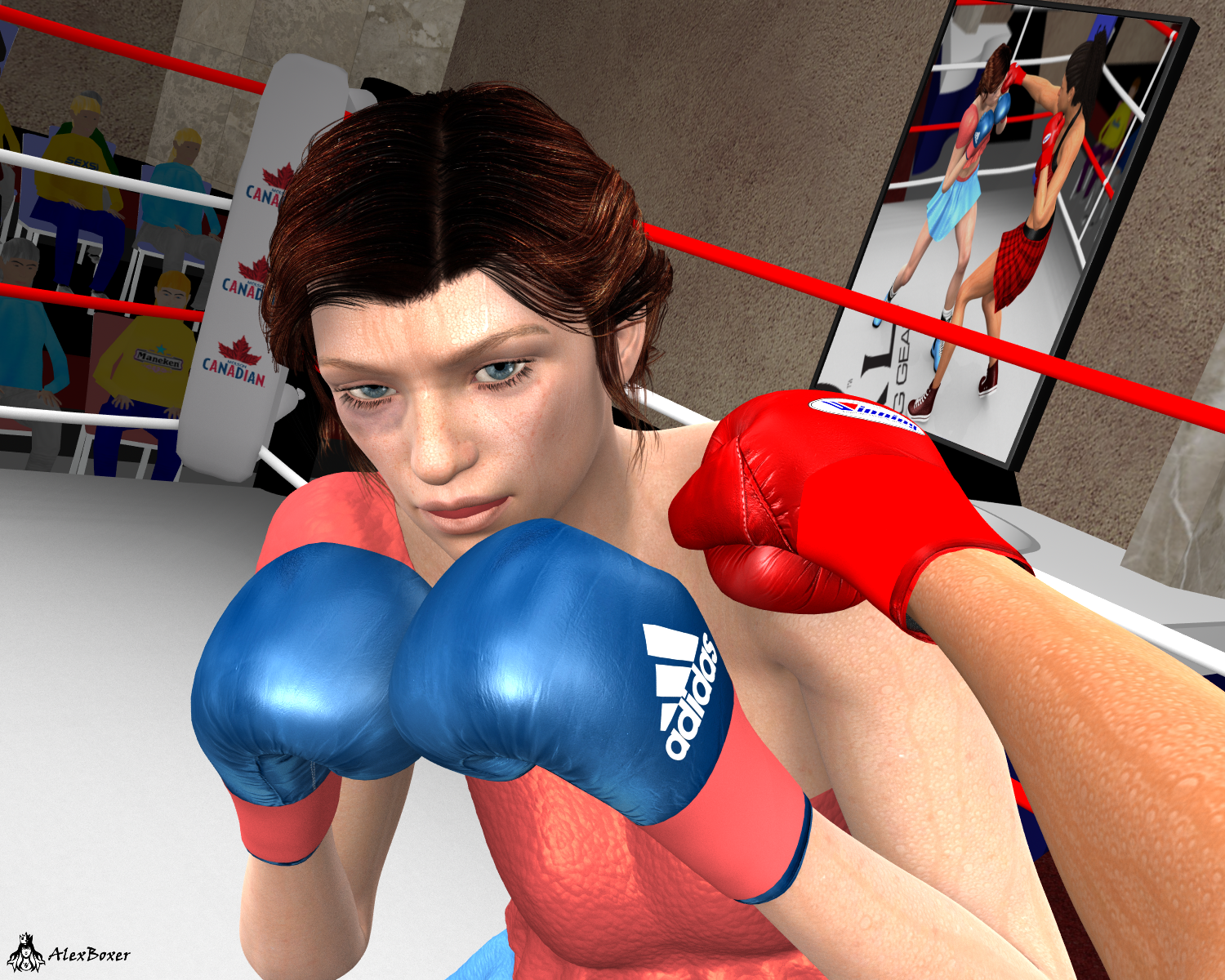 Having been thoroughly outclassed in the fifth round, Mechelle tries desperately to make a late impression on the judges and her opponent. She goes back to her biggest weapon, the uppercut, but Emma was more than ready for that, and although she doesn’t get a punch with her deep blue gloves in, she uses her shoulder and upper body to make that uppercut miss wildly.

Chantal: “The uppercut for Mechelle Gauthier has been her best weapon, but that time McGale said ‘No thank you, I’ve had enough of that punch.'”

Mechelle thinks: I think Emma’s coming back into this fight. I really wish I finished her off in the third… 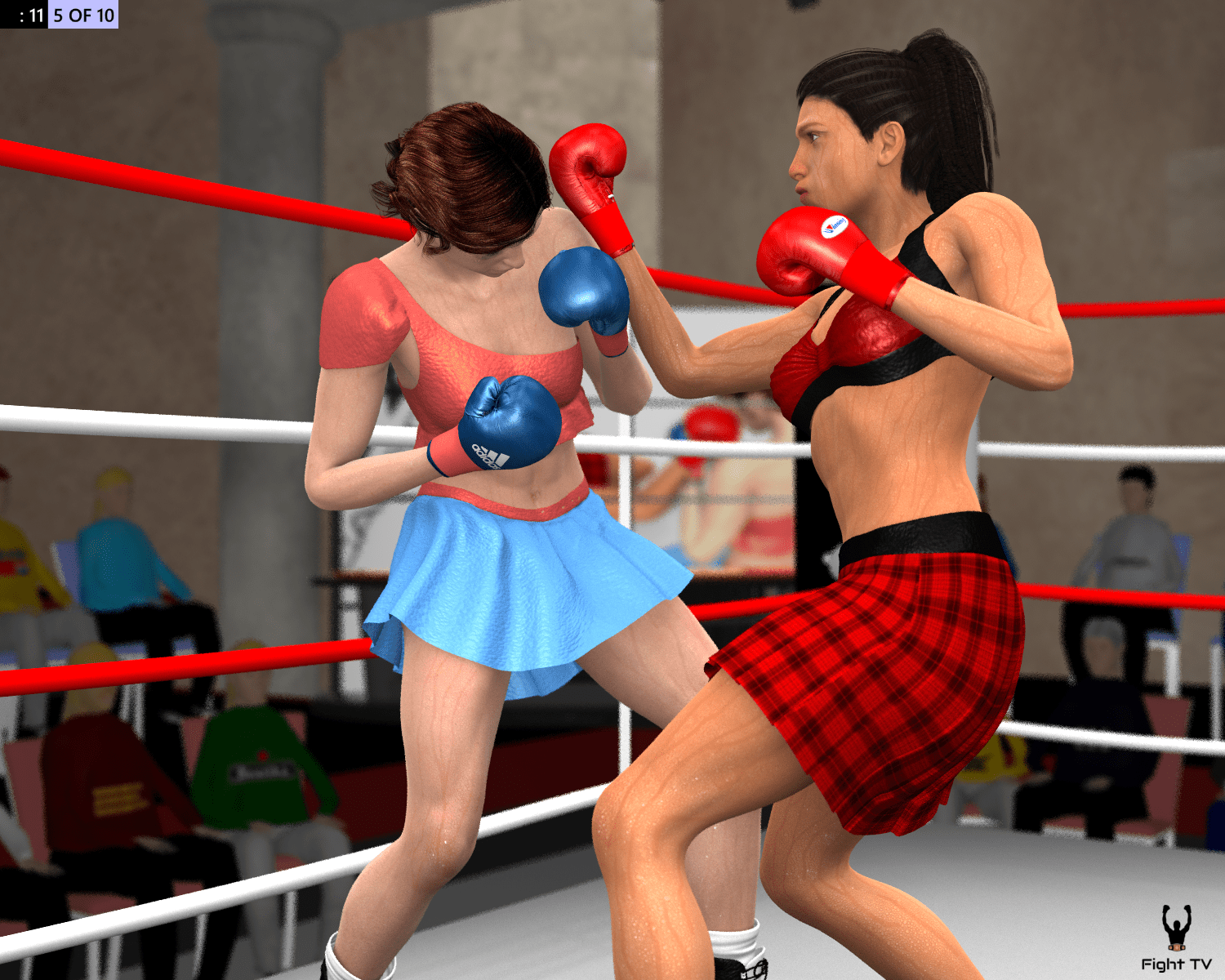 In the corners leading up to the fifth, Thomas gives Emma a simple instruction – take the body. Emma approves and starts the fifth with that in mind. Mechelle has trouble dealing with The Peach’s ruthless’ body focused attack. Even when Mechelle tries to fight back, she finds herself almost getting folded over by wicked punches to the body, like this one at 1:24 in the round. Mechelle’s attempted counter was a day late and a dollar short.

Chantal: “The sound of that left hand from McGale will be music to the ears of supporters of the Peach. That’s the kind of shot that Mechelle will be feeling the effects of for the remainder of the fight, and the next week, in all likelihood.”

Sylvie thinks: This is bad. Emma’s doing good work to the body, not the way she usually does, but she’s being effective. 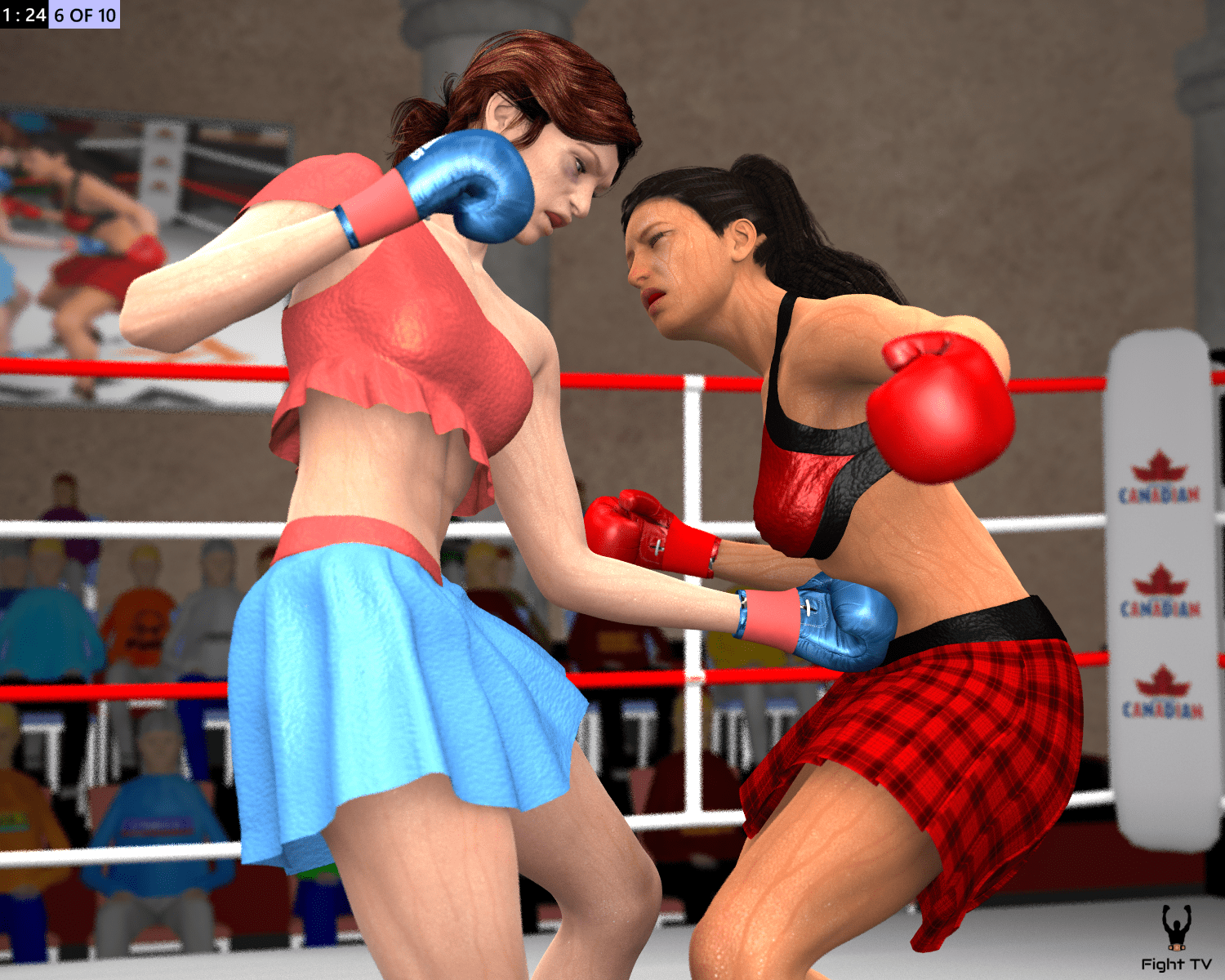 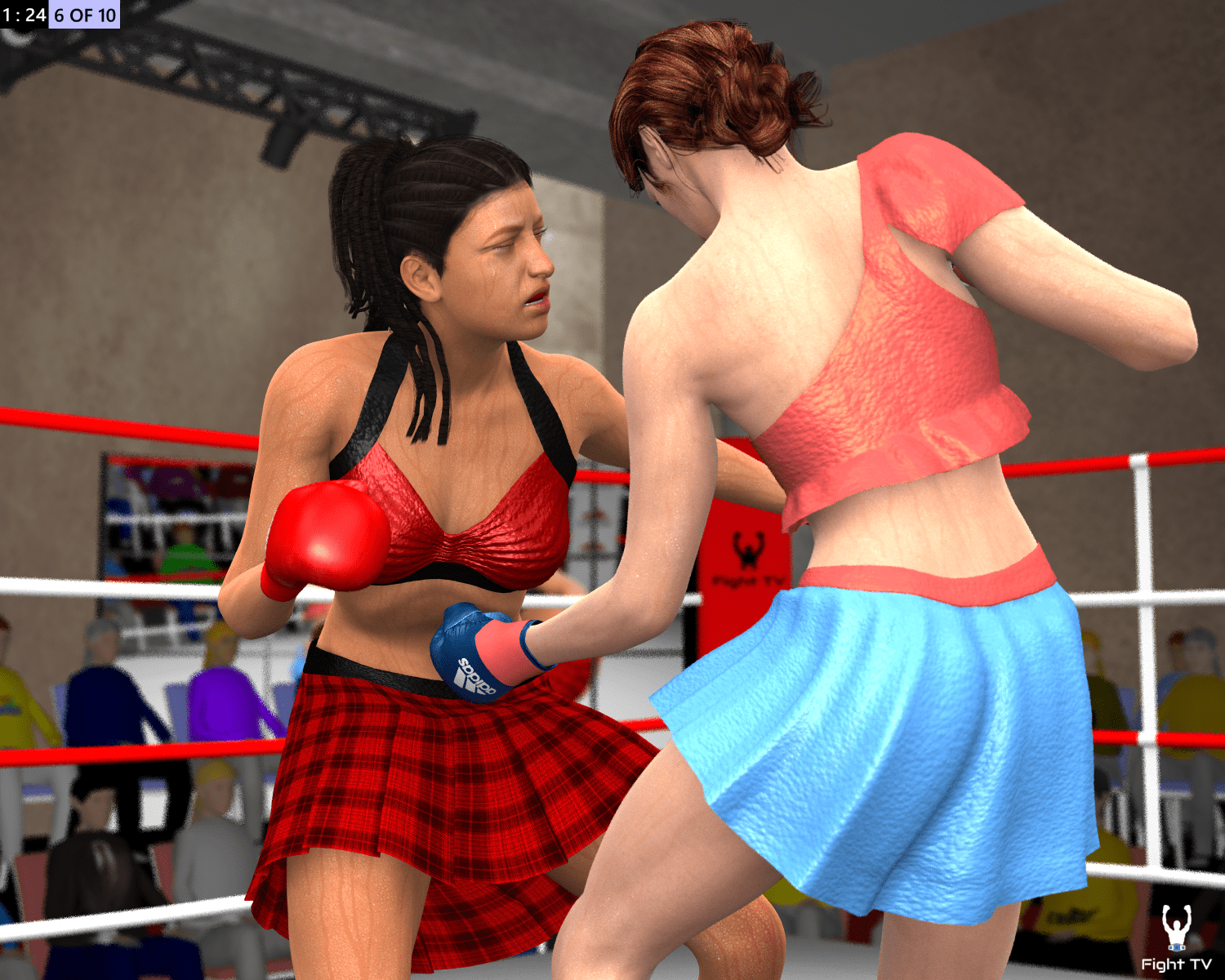 Halfway through the round, Mechelle figures out that either she’s going to get beaten down or she’s got to fight back. It’s tough for her to fight through the pain that Emma has doled out in the round, but steps into range with Emma in an effort to initiate an exchange.

The Peach is more than happy to engage with Mechelle, and the two get into it, exchanging leather fast and furious. It’s Mechelle that comes out ahead on an exchange of right hands. Though Emma’s punch didn’t miss by much, Mechelle’s short right hand punishes her, catching her right around the eye.

Chantal: “Mechelle flips the script here and scores with a great right hand, while barely avoiding the reply from McGale. Mechelle’s punches have had a great accuracy to them in this fight. Emma’s increasingly swollen face is a testament to that.” 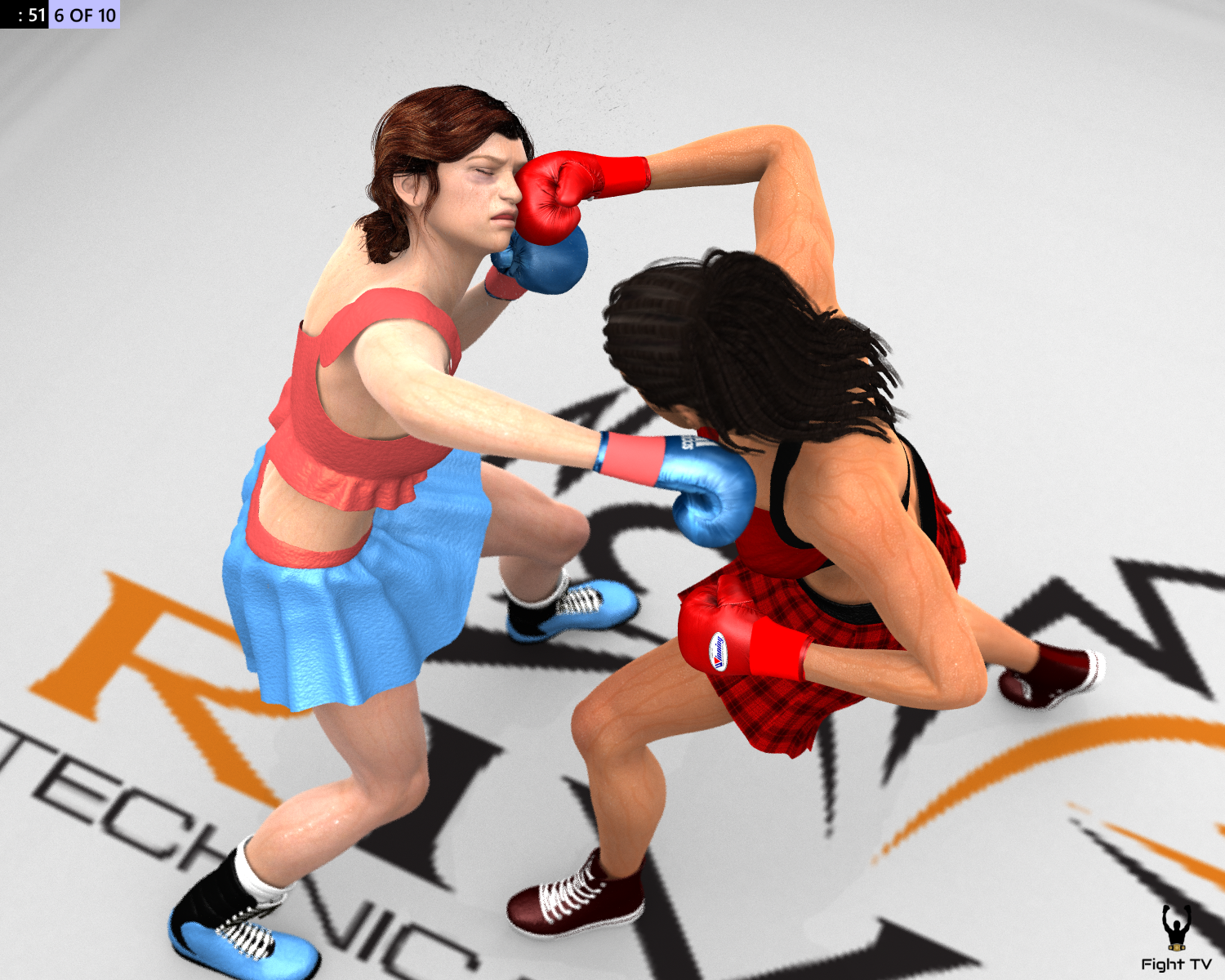 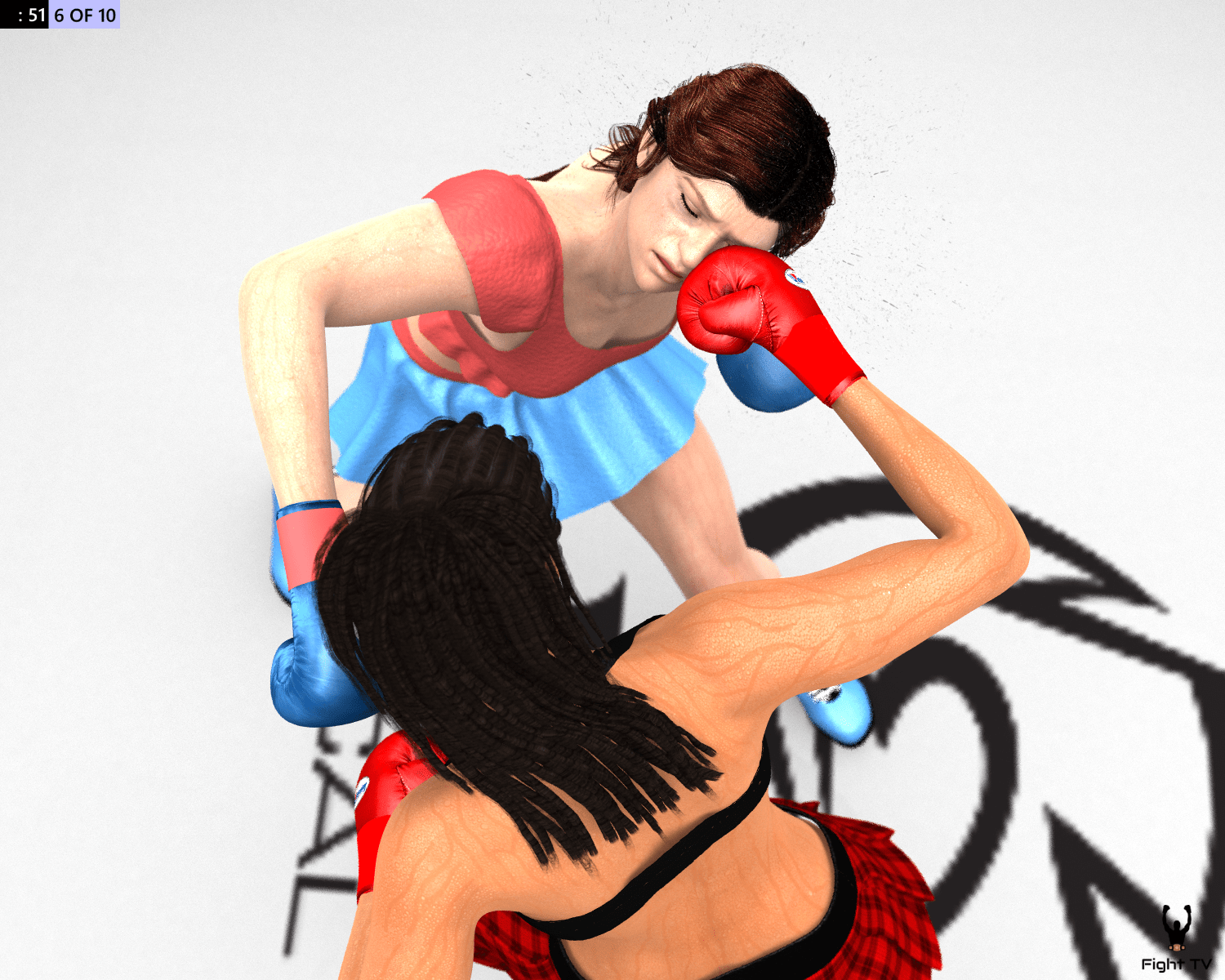 But Emma’s resolve is unflappable, she merely resets and goes back to work. Mechelle might have gotten a bit of the flow back, but Emma simply just takes it back. She outlands Mechelle two or three to one. Nothing earth shattering, but Mechelle is gradually slowing down as she takes shot after shot from Emma’s blue gloves.

Emma thinks: I got this. I’m outboxing Mechelle. I don’t think she has any more answers to give.

Chantal: “A lovely left hook from McGale as she gets Mechelle around the temple. That’s a dangerous punch, as it can take away a fighter’s equilibrium, which is pretty dangerous when in the middle of a boxing ring. Mechelle looks okay, but this has not been her round at all. And it almost feels like this fight is slipping away from her.” 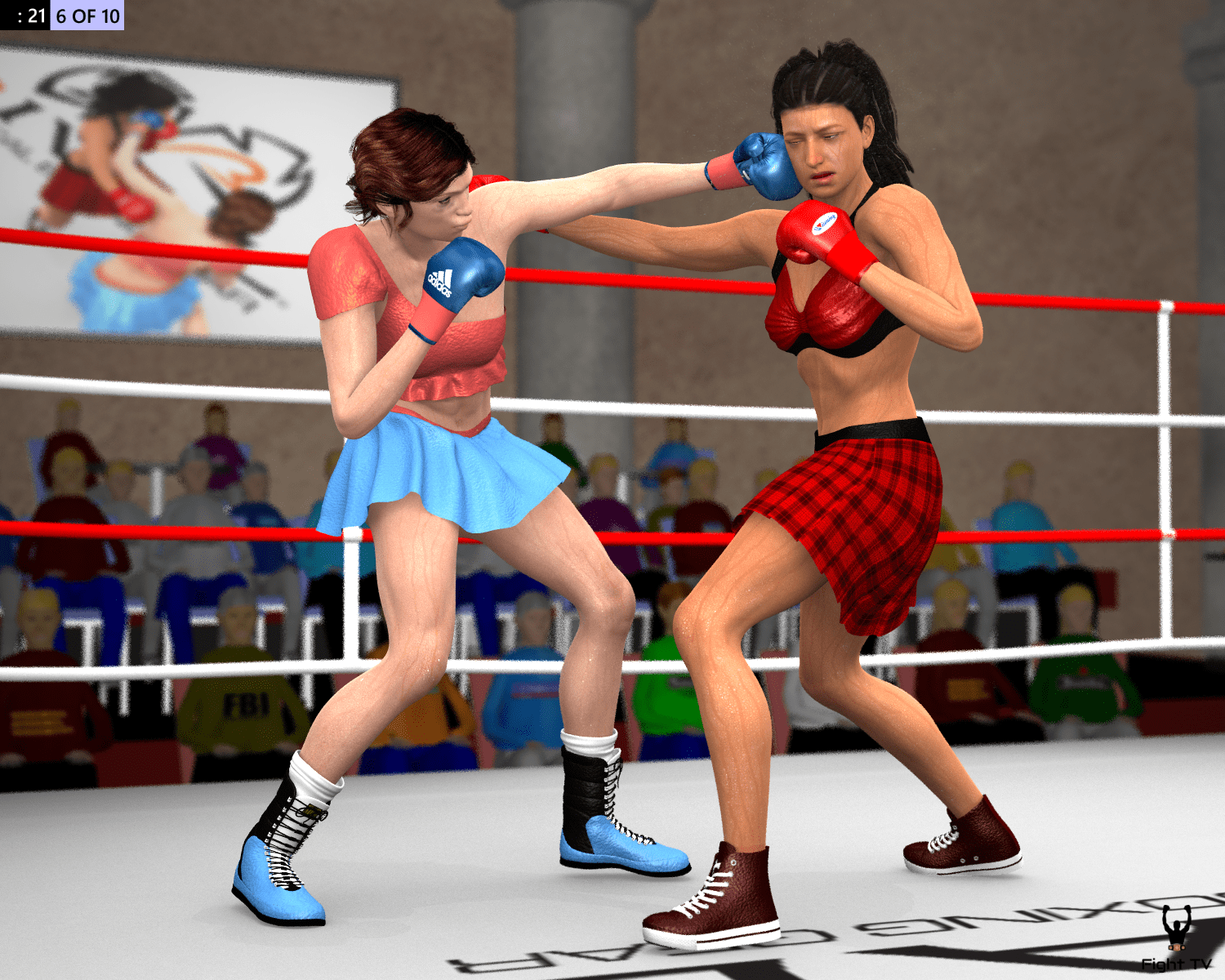 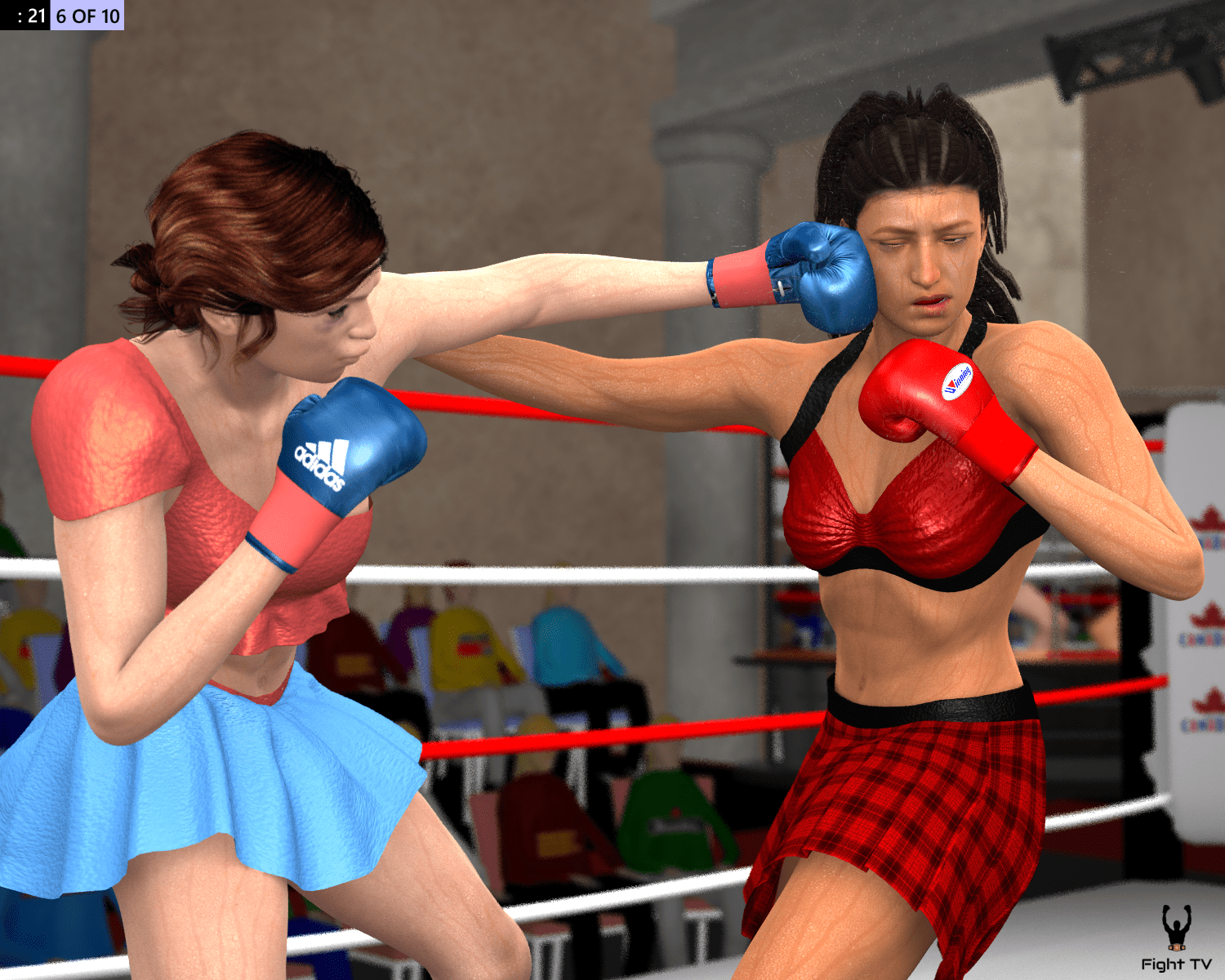 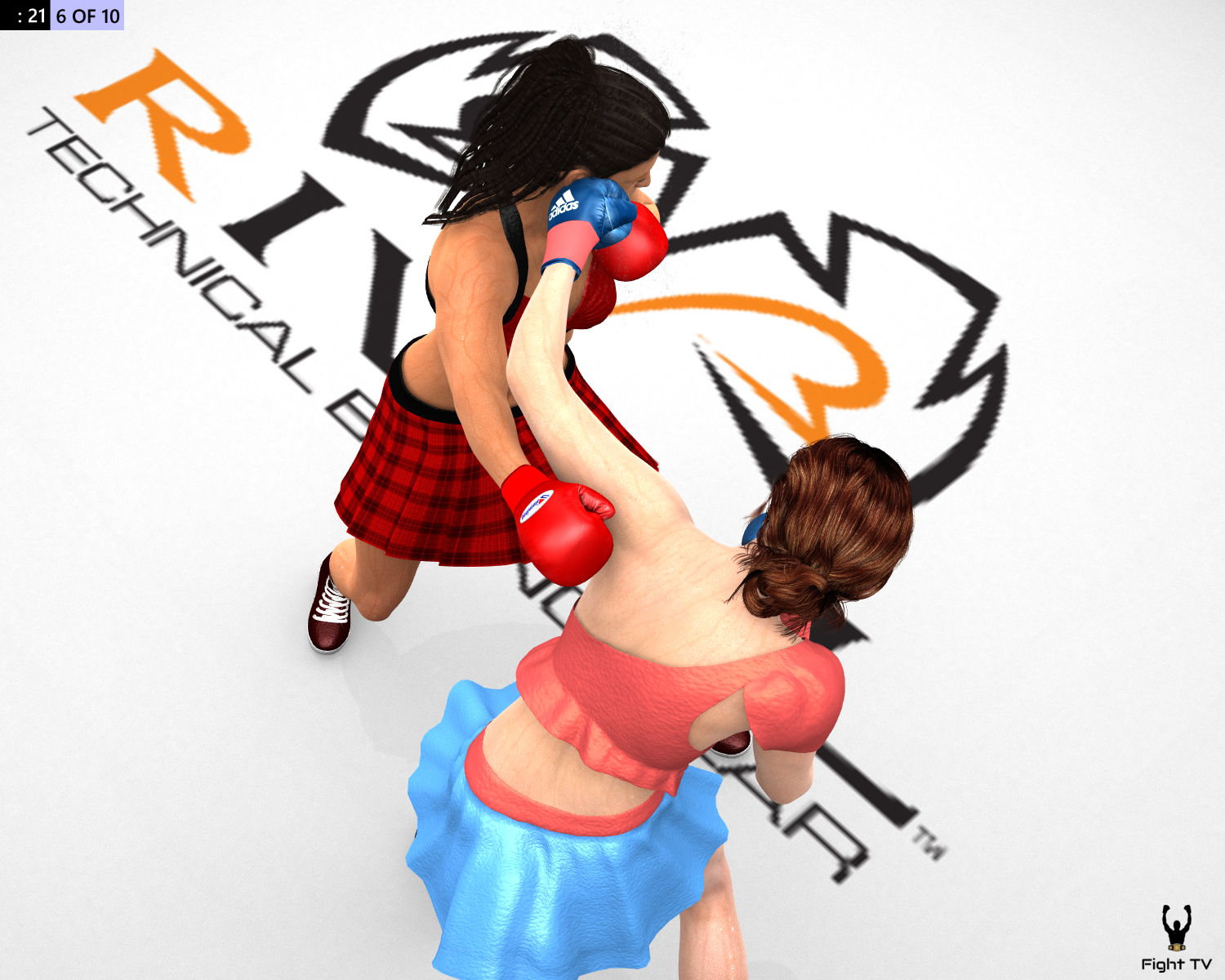 The sixth round is over, and the body language from the fighters as they walk back to their corners tells the story. Even if Emma’s face looks a little more marked up than Mechelle’s, the confidence is clearly higher for The Peach. 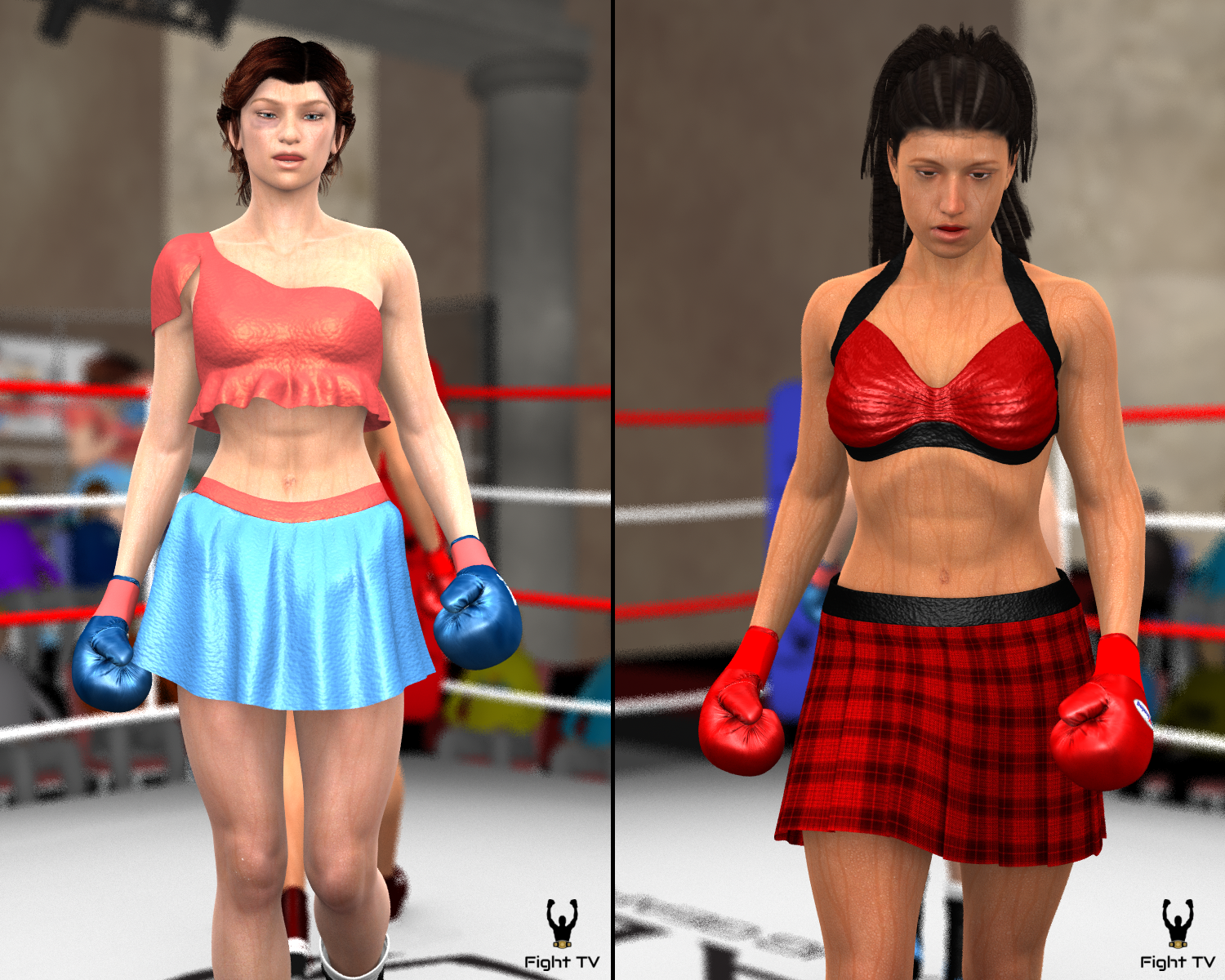 In the blue corner, things are pretty calm. Emma has emerged from a tough period of the fight and has been able to impose her will on Mechelle.

Thomas: “Your face is looking a bit swollen.”

Thomas: “It’s not too bad, but your right eye is closing a bit. You might adjust your stance to protect it a bit more.”

Emma: “I’m doing better work with my hands in her face than protecting my face.”

Thomas: “I think this one is going the distance though. Don’t be too callous about your own defence.”

Emma: “I’m still down on the scorecards. I gotta punch my way to victory.”

Mechelle: “I don’t get it coach, what’s happening? She’s just beating me.”

Sylvie: “You’ll still be ahead on the scorecards. Don’t let your head drop. I want a renewed focus on your defence. She’s having too much success in landing punches. I want her to at least work harder to land her shots.”

Mechelle: “I’m not sure I can do much better.”

Sylvie: “Okay, do you want me to throw the towel in then? Are we giving up?”

Mechelle: “Fuck off, I’m not quitting.”

Sylvie: “Good. Show me some defence, and then rearrange this girl’s face some more. You’re doing good work on that, so why stop now?”

Mechelle: “I don’t intend to.”

Sylvie thinks: Sometimes coaching isn’t about providing great tactical advice, its about keeping motivation up when your fighter is struggling. That’s something Mechelle has almost always needed.

An original character owned by Alex. Click on her fighter card for her full profile and fight history. 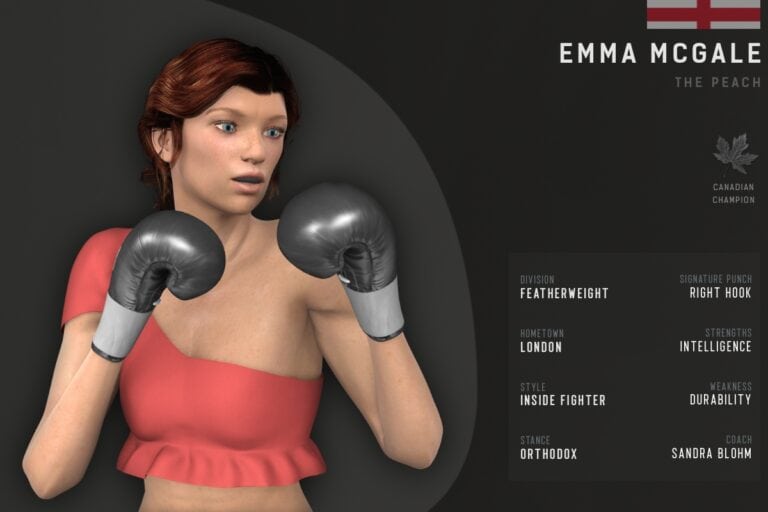