Berlin – The stage is set for a special match in January at the Mercedes-Benz Arena, and Veronica Lillegard takes to the centre of the ring as announcer. Two of the best pound-for-pound fighters will take to the ring.

Veronica is the new Vice President and number two at DE Box-Promotion, the company that owns Final Bell Boxing and Ring Kings. Previously overworked, CEO Heidi Becker wanted the right person. In three interviews, she quizzed her mostly about personal motivations and vision. She made the last “question” a decision to prove skills.

The previous ring announcer wanted far more money than the company was ready to offer for contract renewal. Given 15 minutes to reflect, Veronica said she’d use her public speaking skills to take over duties for the biggest events, which she would attend anyway, and offer minor shows to others. Impressed by the ruthless power move, Heidi gave her the job.

Veronica: “Ladies and gentlemen, welcome back to the Mercedes-Benz Arena for the MAIN EVENT of the evening. 10 rounds of boxing, two minutes each, in the Super Lightweight division. An exhibition between two world champions, who are handing their purses to the Synapses foundation for brain trauma and mental health.” 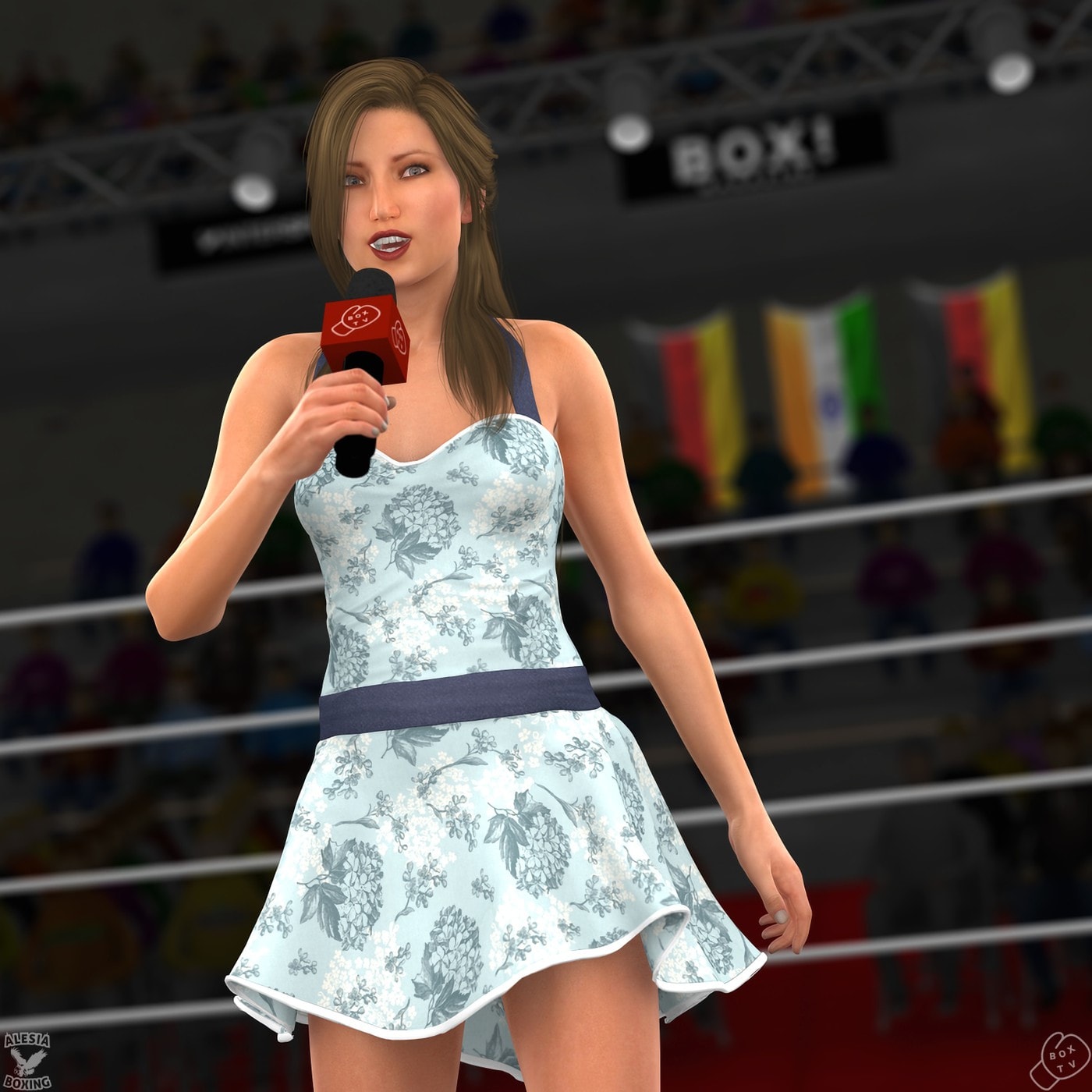 Veronica: “Introducing first, and fighting out of the red corner. She is wearing white and black, and is trained by Regina Halmich. Her record stands at 12 wins, two losses, with 10 of her wins coming by way of knockout. Aged 28, she is the reigning Super Lightweight champion of the world… the Queen of Uppercuts, the Minister of Defense… Alesia ‘The Diva’ Schuuuuuumaaannnnnnnn!”

The Diva meets the announcer under a thunder of applause. 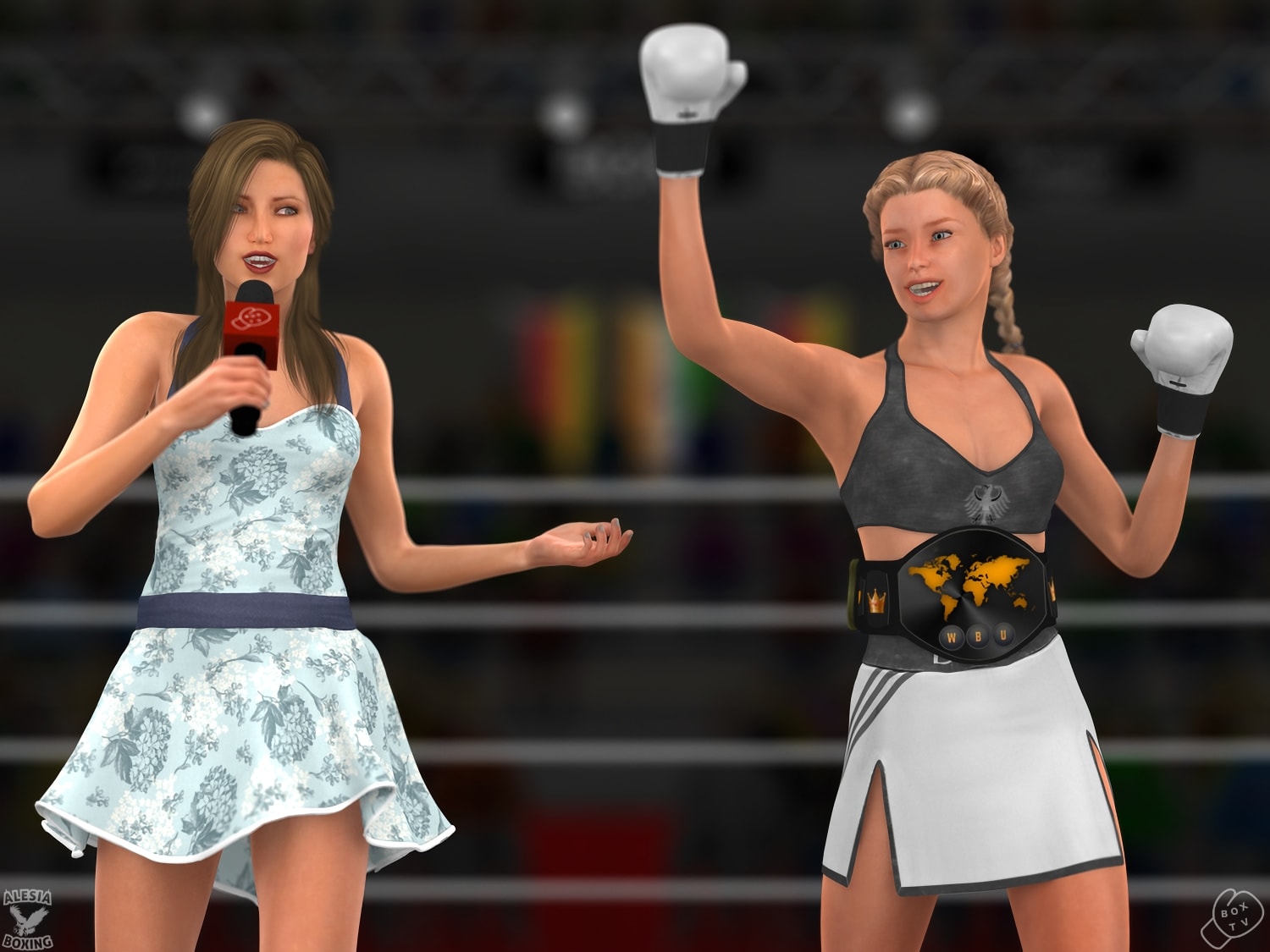 Veronica: “Her opponent across the ring fights out of the blue corner. She is wearing red and brown, and is trained by Parvati Tavade. Her record? Stellar at 36 wins, 25 of them by way of knockout, and only one loss. Aged 35, she is the reigning Lightweight champion of the world… the pound for pound champion according to BOX! Magazine… from Bombay, the pride of India… Zohana ‘The Dementor’ Paaaaaatel!”

A regular on European soil, Zohana also gets a great reception from the Germans. 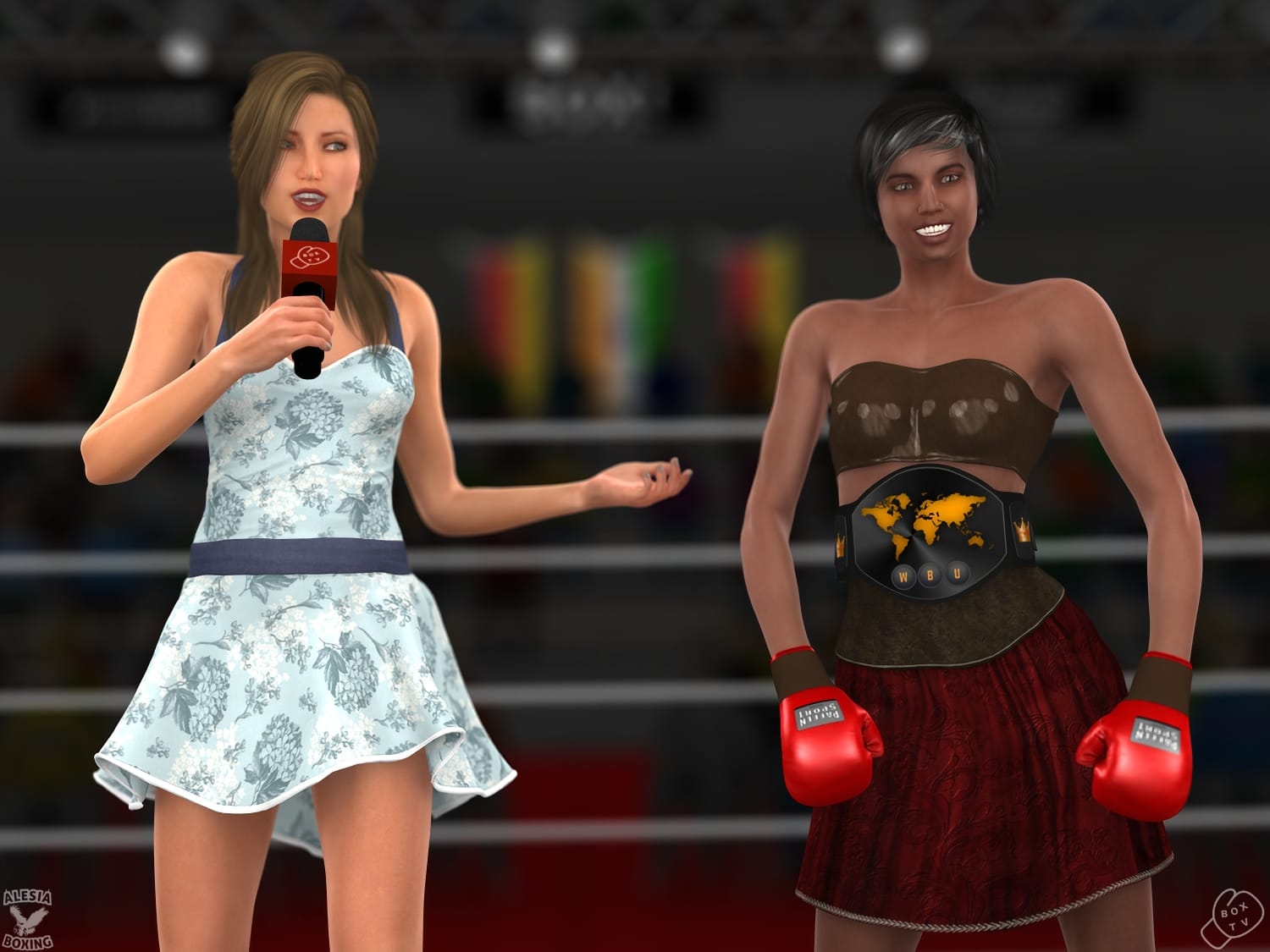 Referee Zelda Deniz gathers the fighters for instructions, the bell rings and they get to business.

Zohana: “Let’s give them a good show.”

It’s an impressive sight for the audience, and for Alesia herself, to see the Indian veteran in action in the first two rounds. Flexible legs, shuffling arms and fluid movement from head to toe. A full package of skills, experience and confidence.

The Diva tries to keep up with The Dementor’s level, but it’s a challenge. Zohana delivers pinpoint accurate fists wrapped in red leather, with speed and placement, but she keeps punches light since it’s an exhibition. 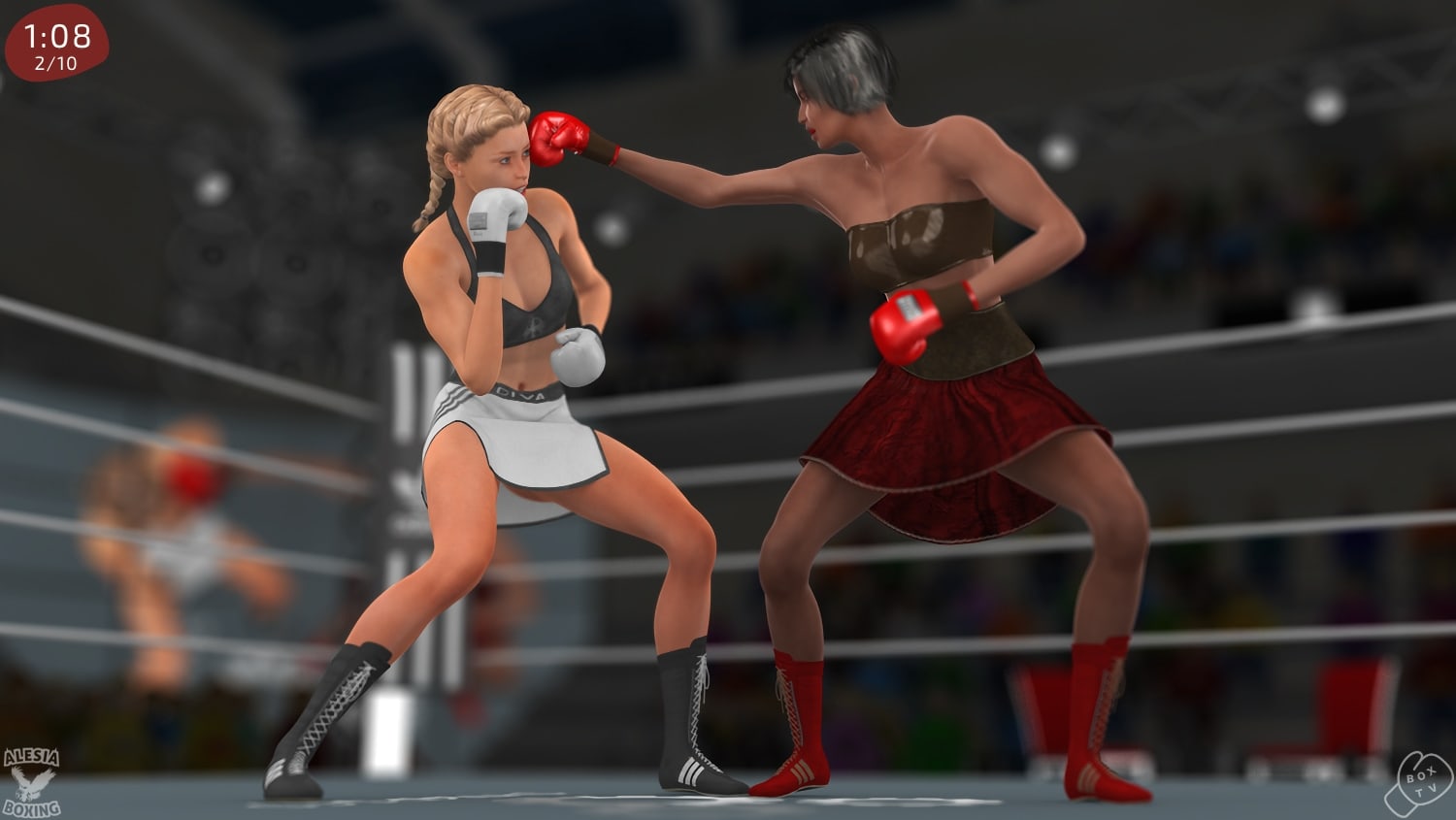 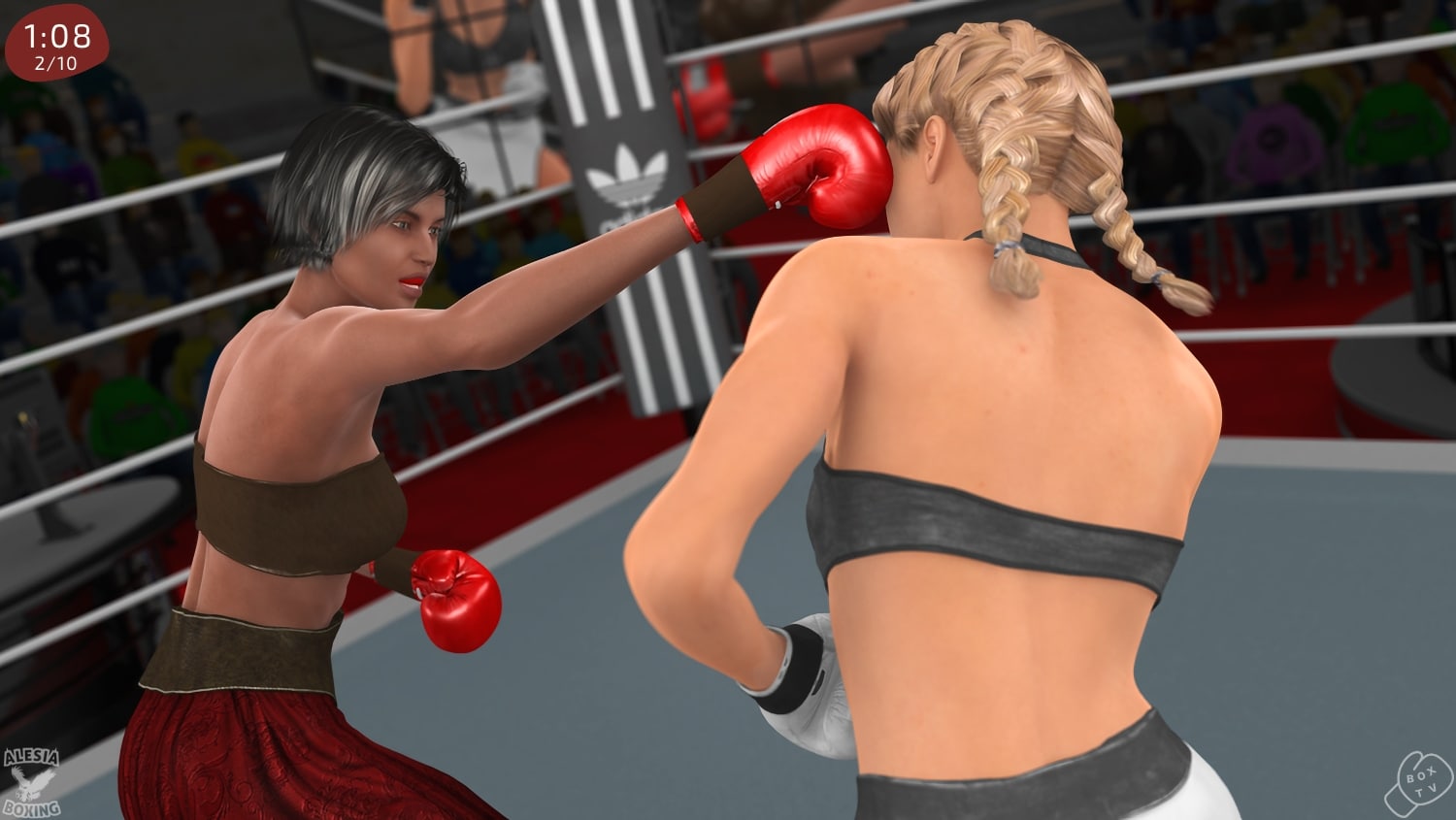 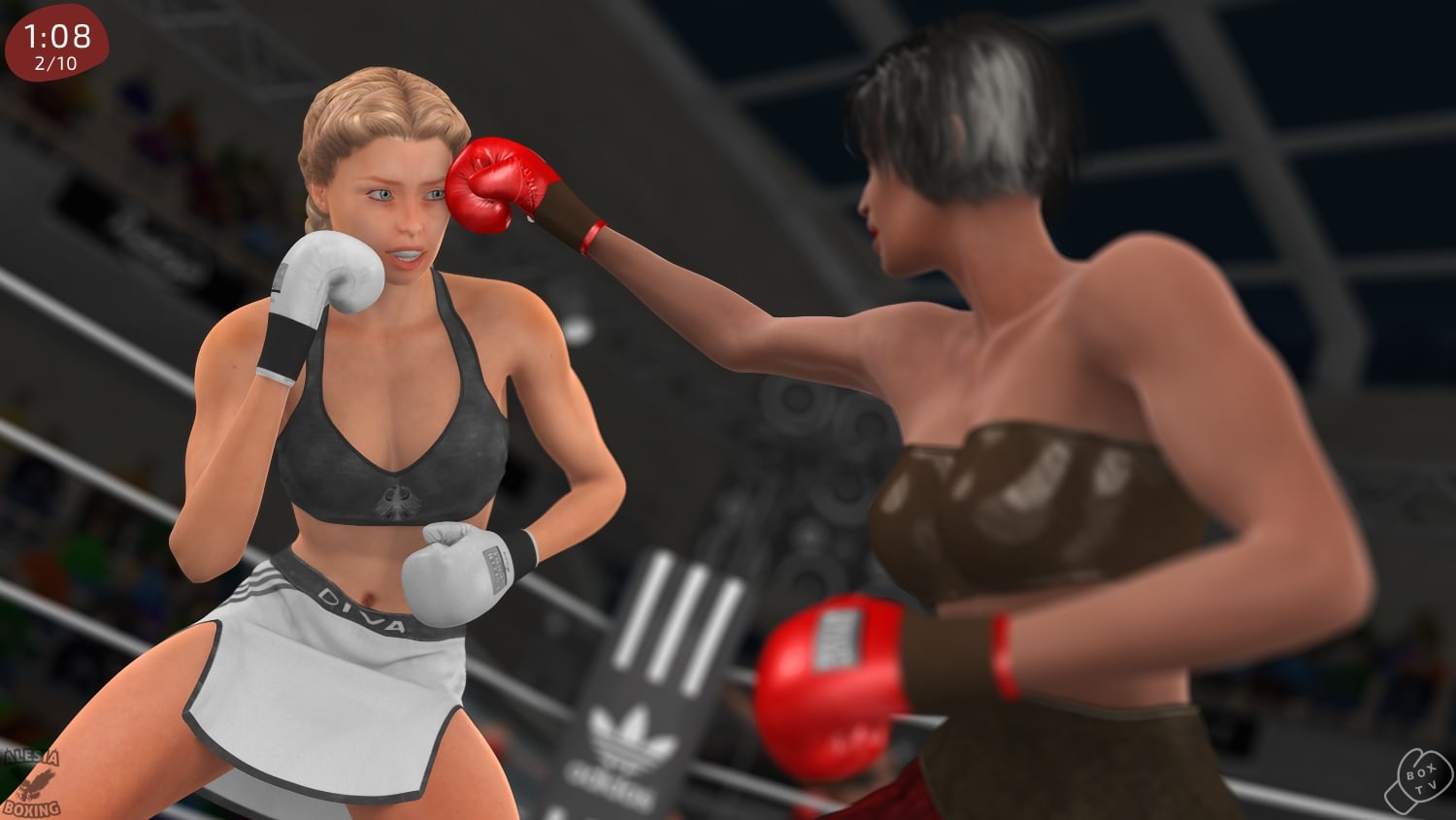 Zohana takes the first three rounds with the expertise of a seasoned champion. Prompted by Regina to just enjoy the boxing, Alesia stages a bit of a comeback in Round 4. Now familiar with the Lightweight’s timing, she is more successful in using the Philly shell and her trademark counterattacks to hit her friendly opponent with white leather. 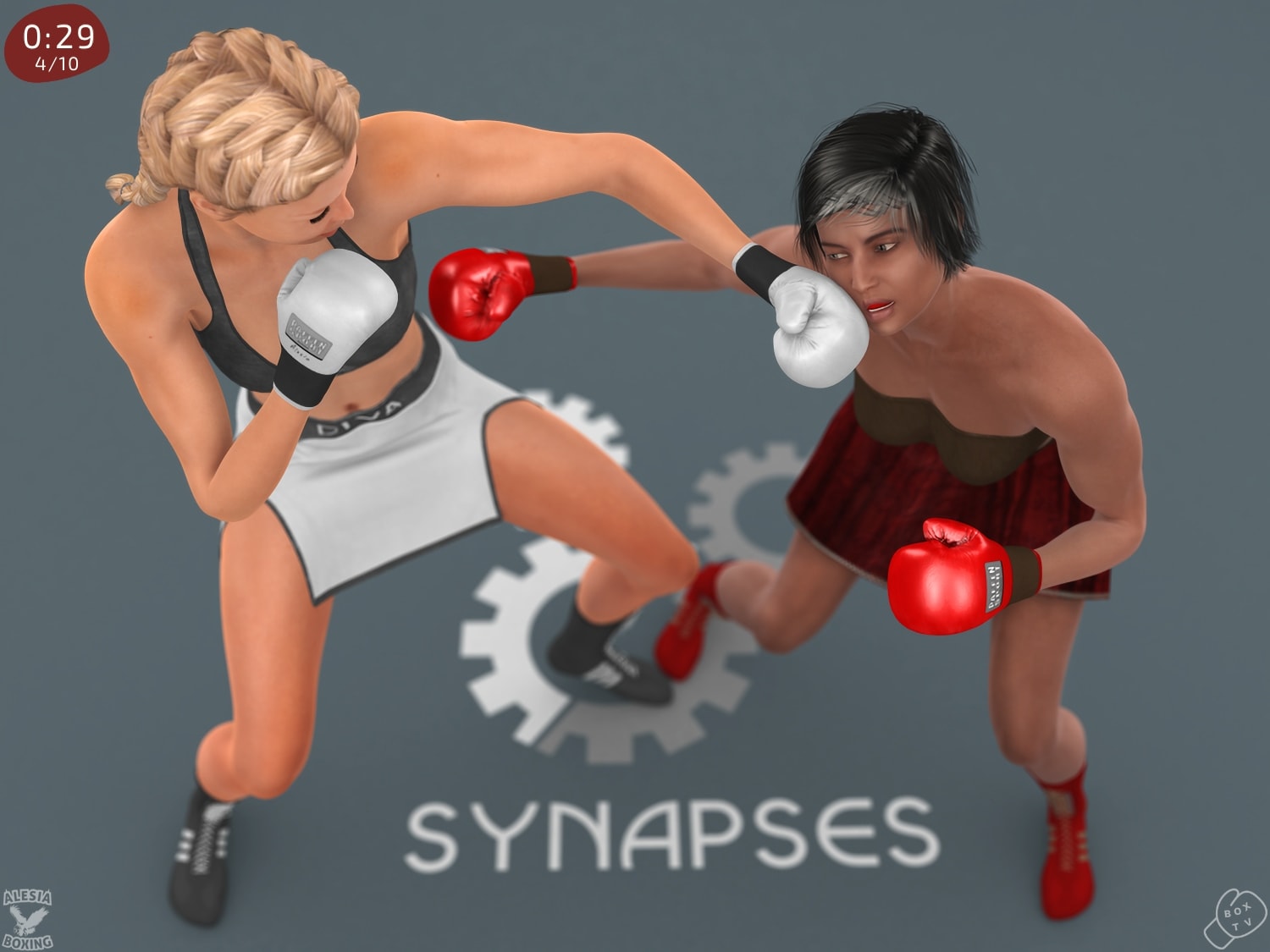 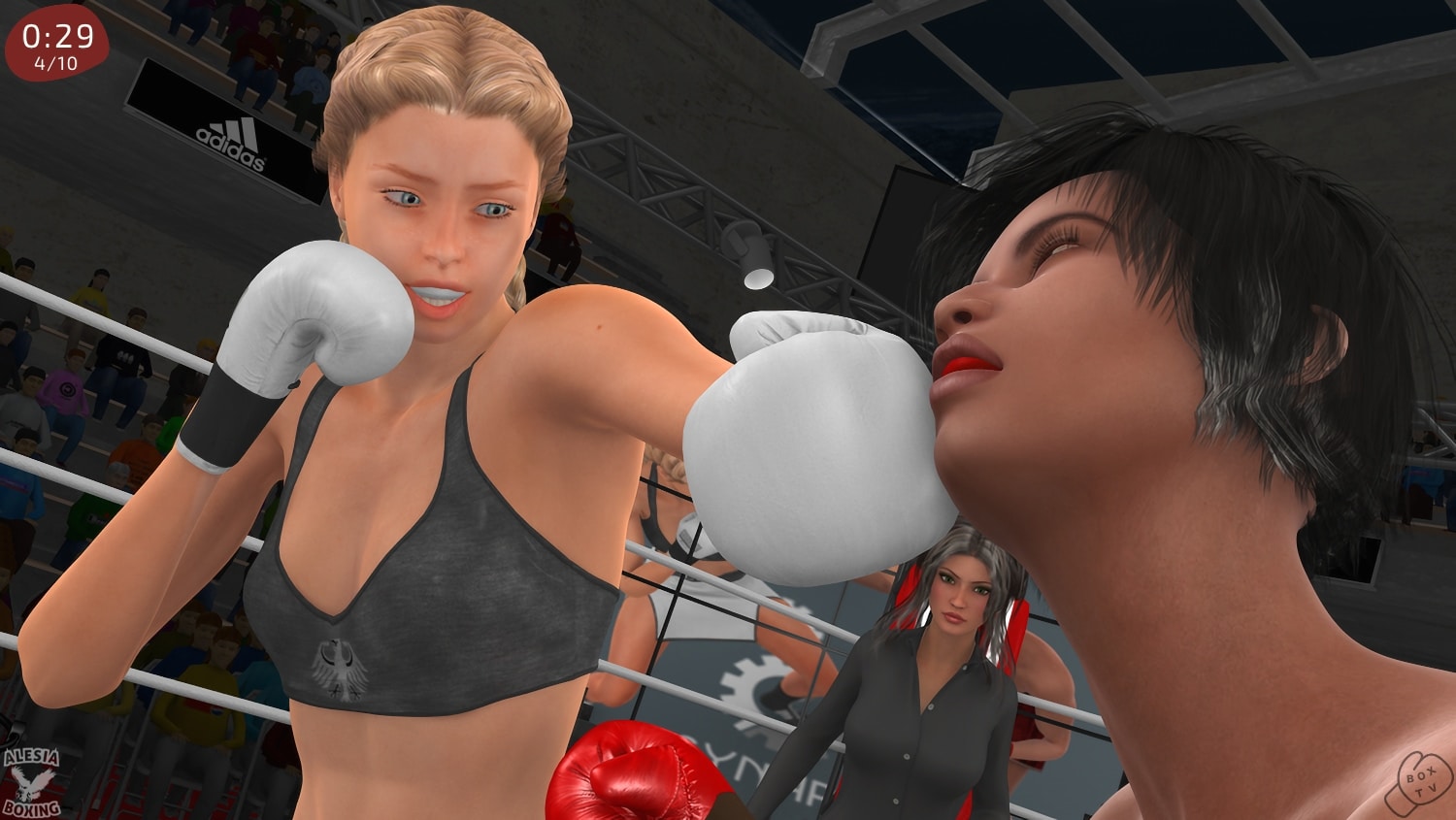 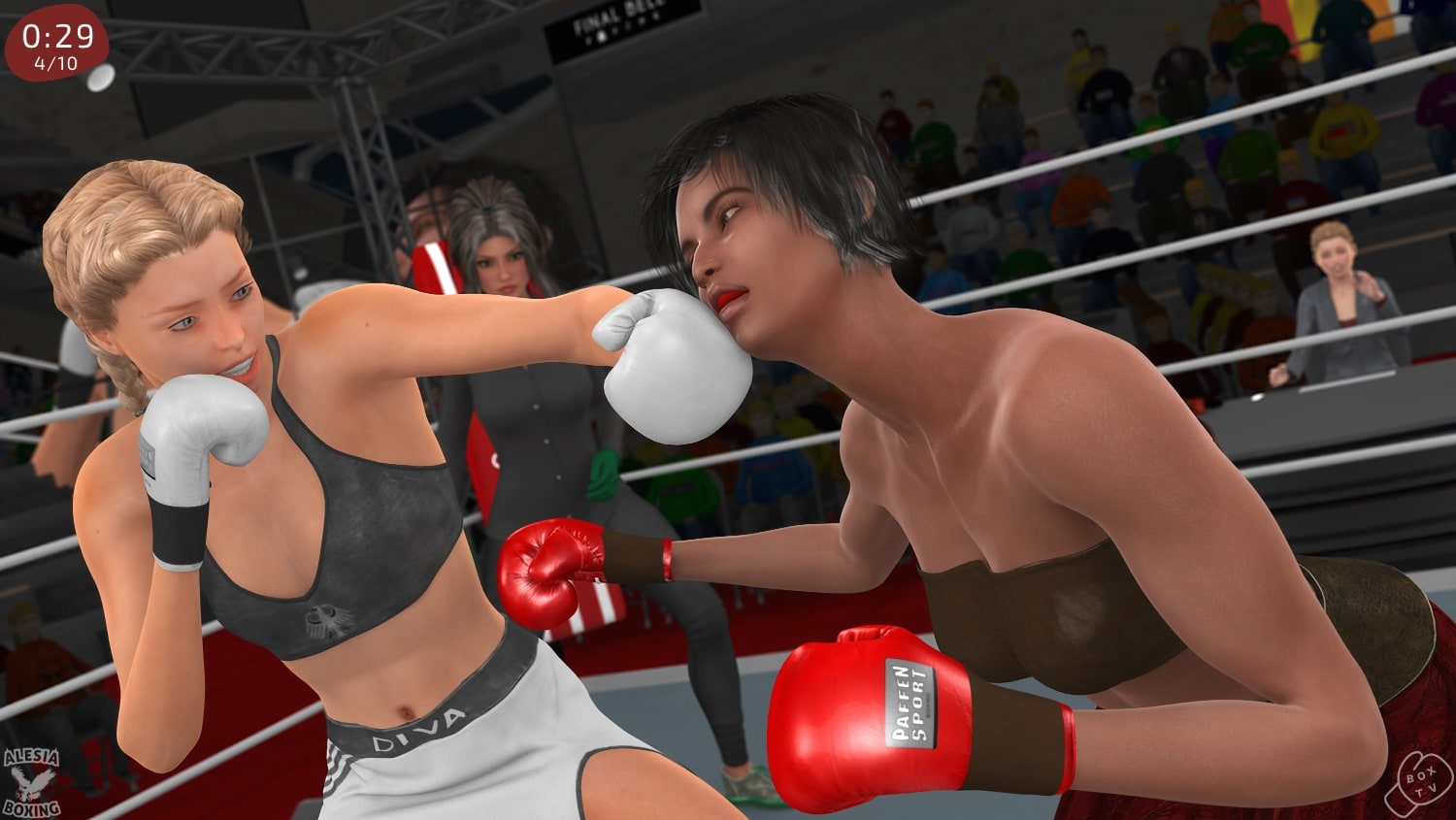 The Dementor shifts gears in the fifth round. She moves in the ring with the ease of a gazelle and lets her fistic creativity flow.

At 1:04, she makes swift changes of stance, with hand shuffling. She gets close to the German, who thinks “uppercut”. Then she steps back to make her instead reach for the left hook. A confused Diva is thinking of two punches at once when Zohana sticks a long-range jab in her mouth.

While Alesia is among the best pound-for-pound boxers, she is in the ring with the number one, who has an edge.

Ally thinks: “My God. She’s toying with me.” 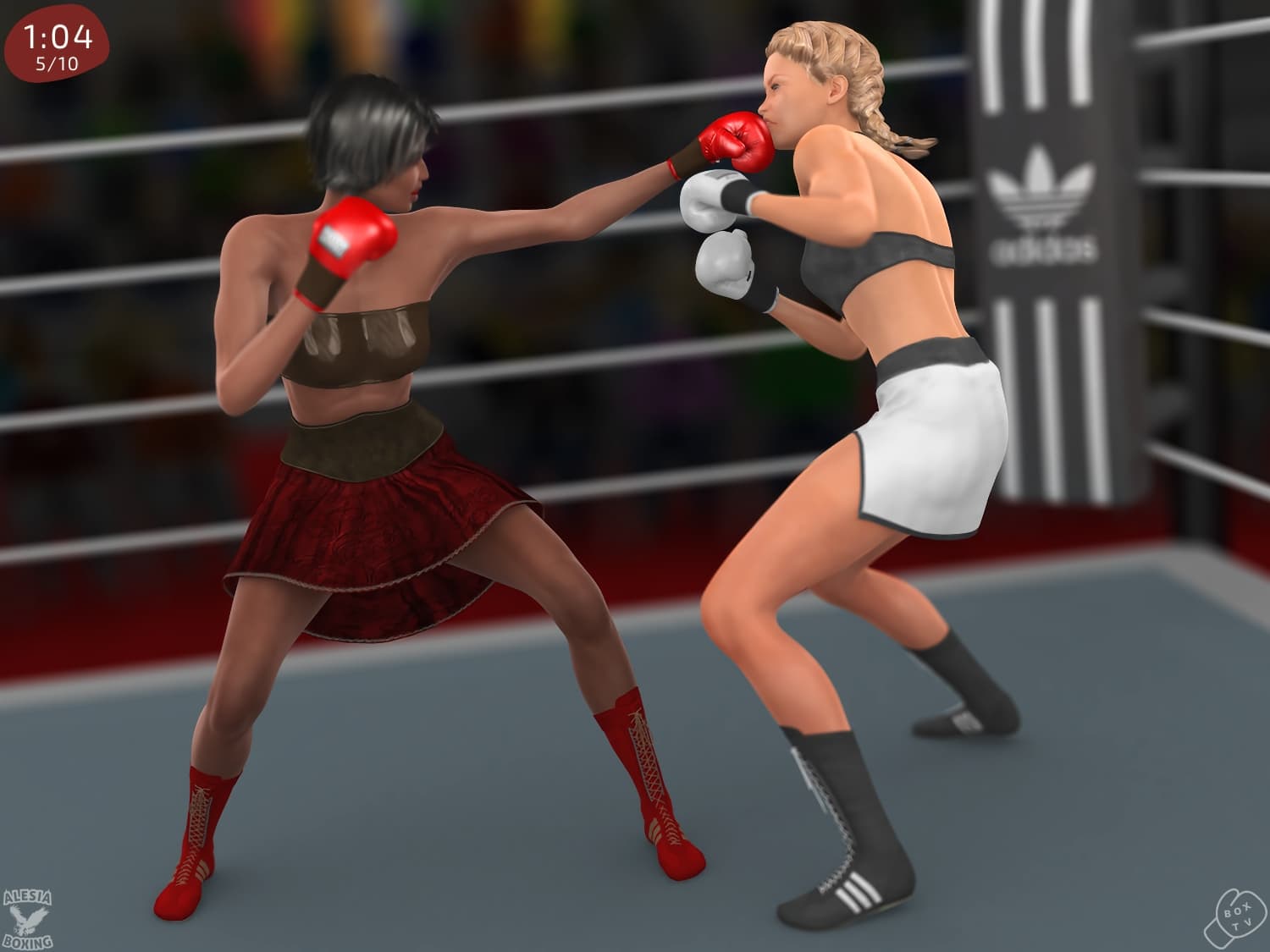 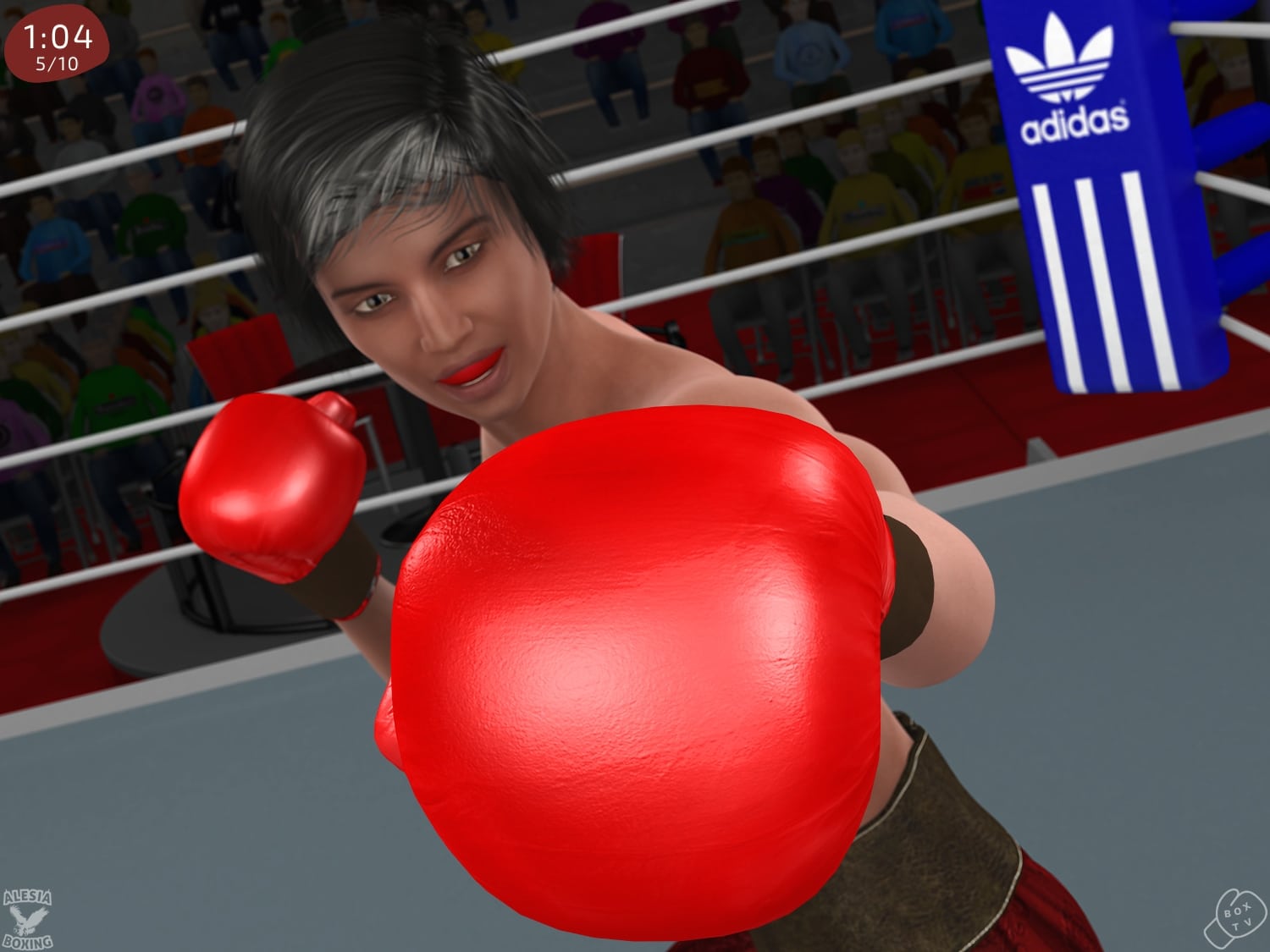 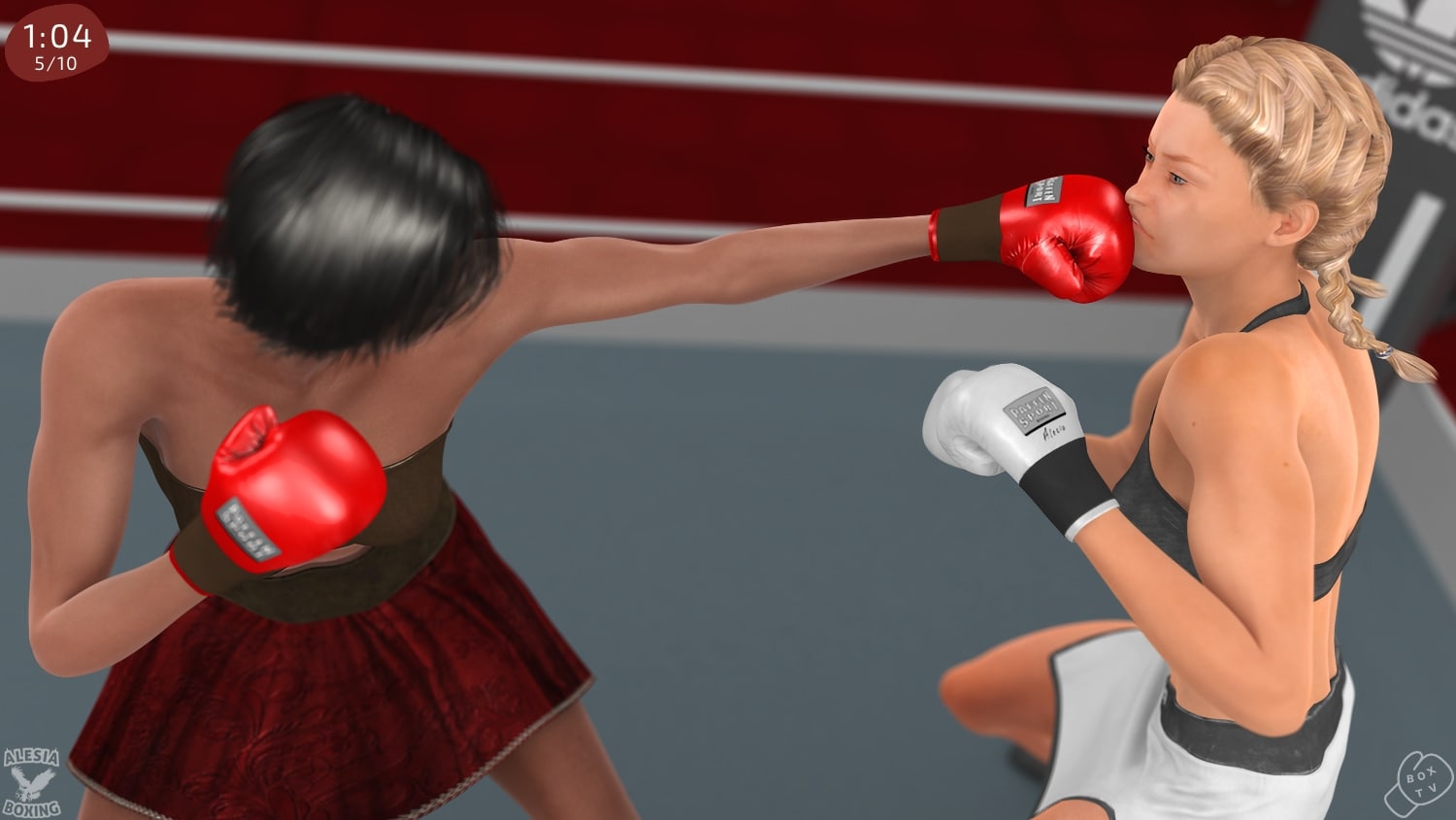 The Lightweight champion increases the work rate in the sixth round. She wants to demonstrate that she hasn’t lost a step at 35 years of age, and that she can teach the younger woman a friendly boxing lesson.

Constant back and forth as well as diagonal movement makes it hard for Alesia to ever settle down for an opportunity to throw a serious volley. Zohana moves forward to the left, feints and moves out. She stands for a second, prompting the Bavarian to cook up a left jab to the body for control. When she starts releasing, the Indian veteran steps back diagonally to the right and lets out a long right cross that cracks her on the chin. PISH! 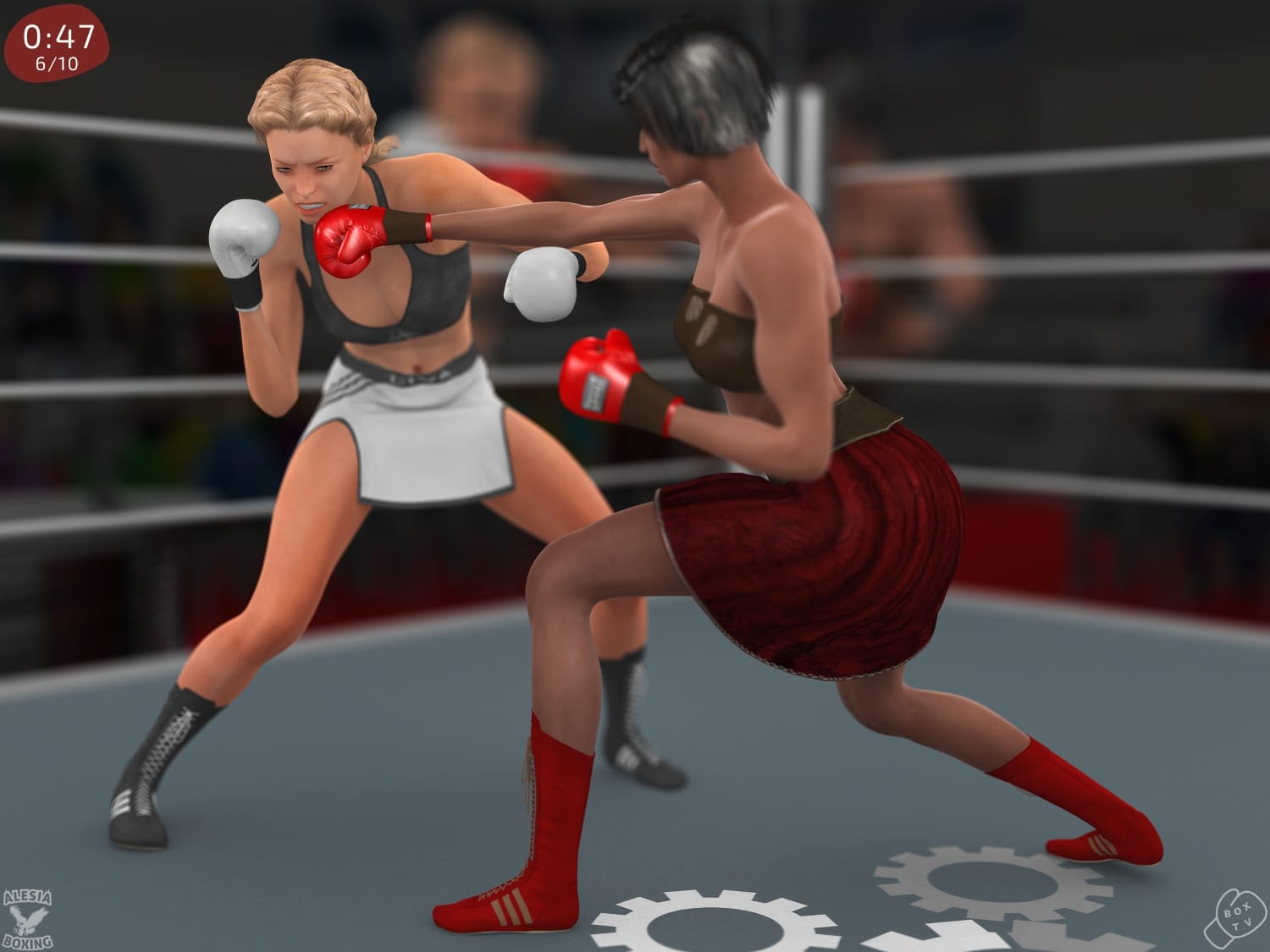 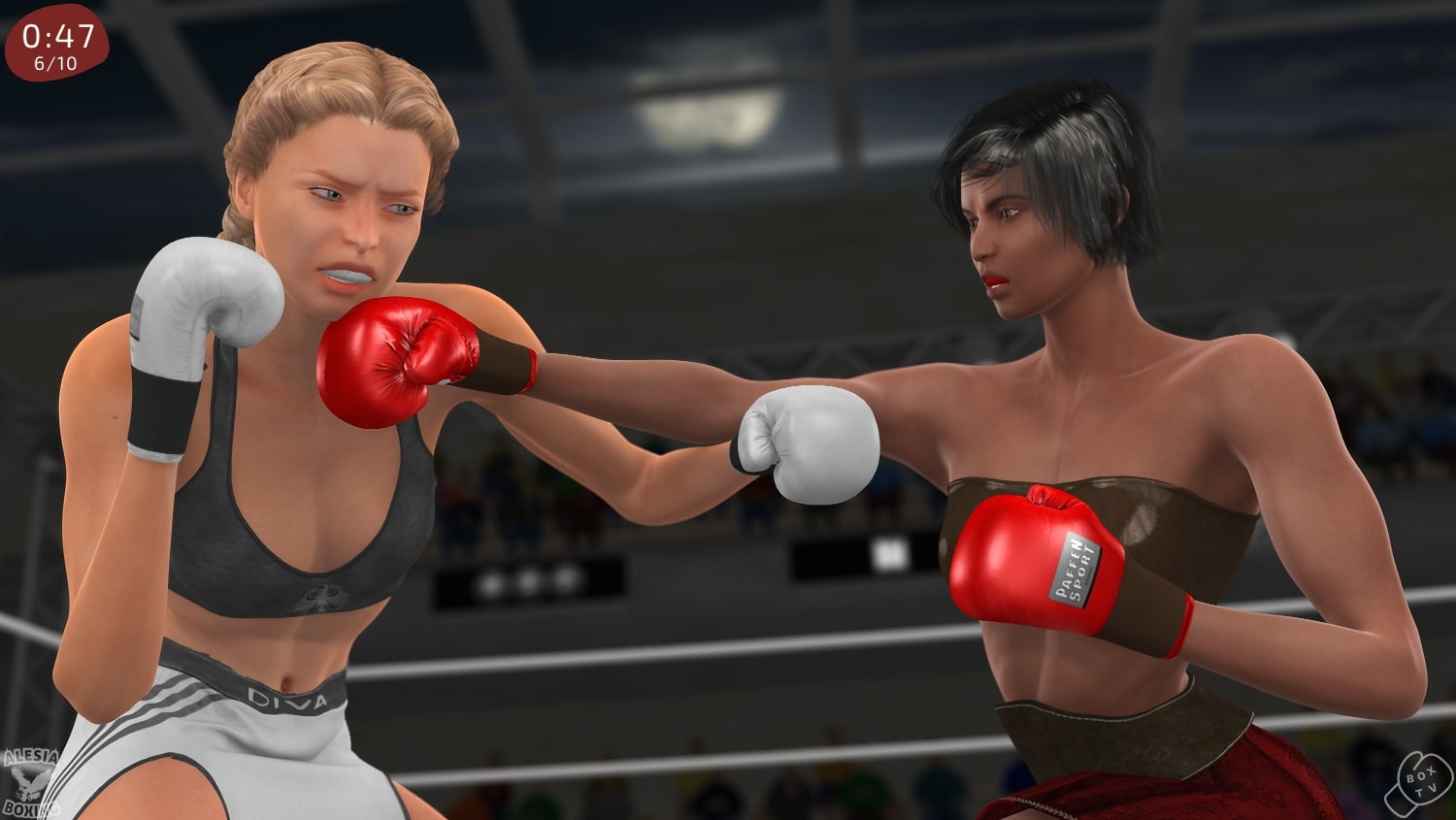 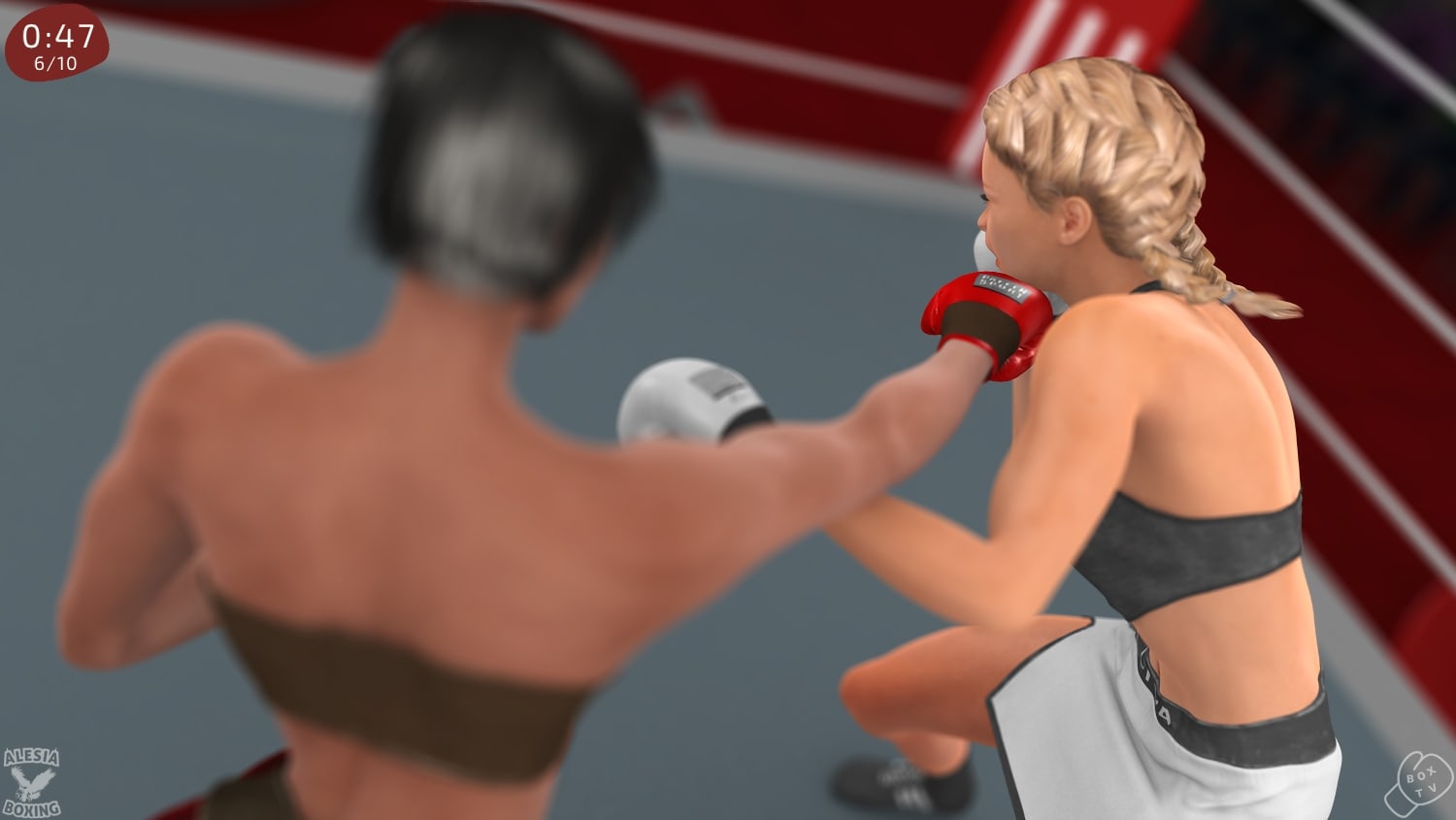 It’s not the hardest punch the Diva ever took, but the timing and placement are so impeccable that it makes her dizzy. She goes forward to clinch, a move that Zohana doesn’t resist.

Zohana: “I’m not gonna knock you out, Ally. Just work with me.” 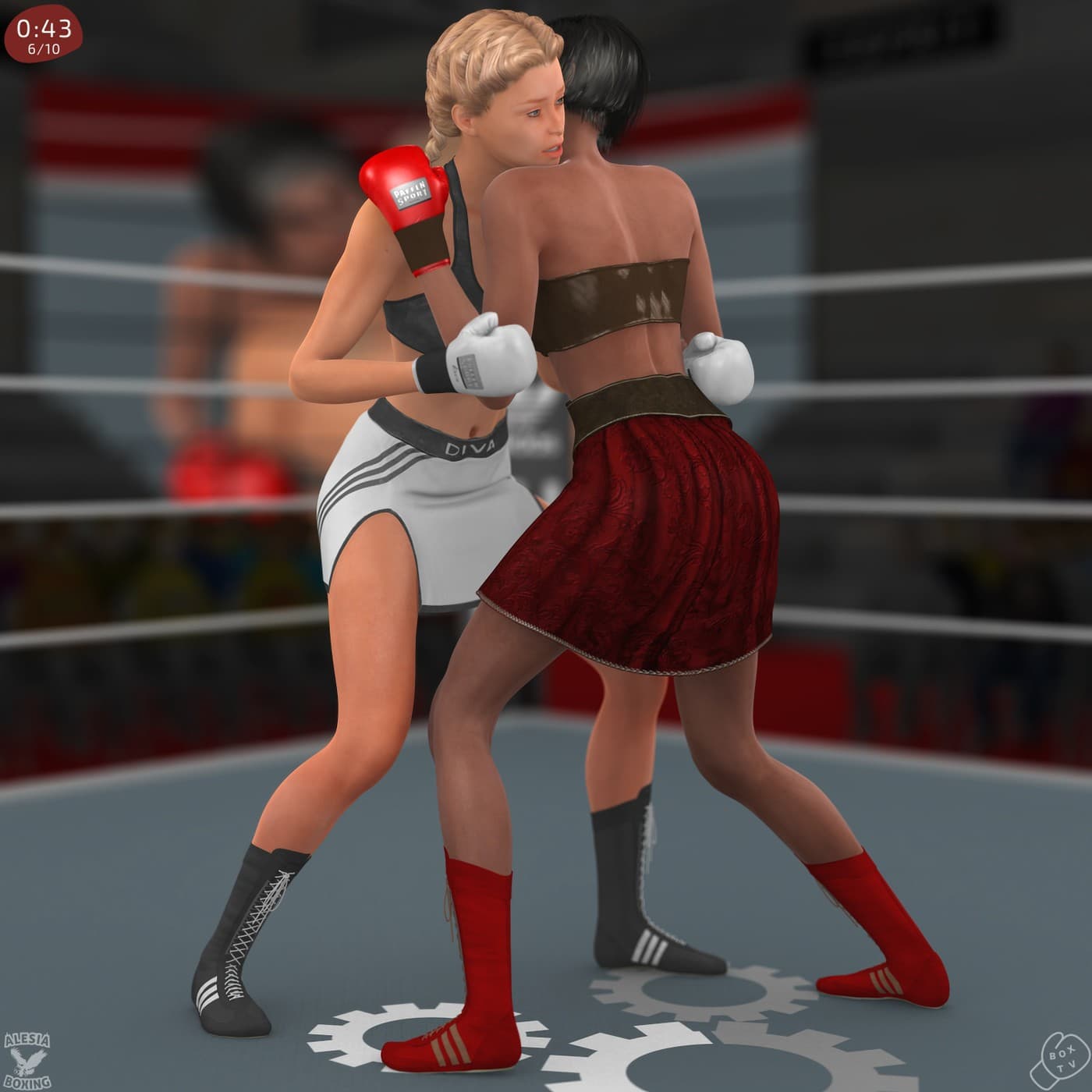 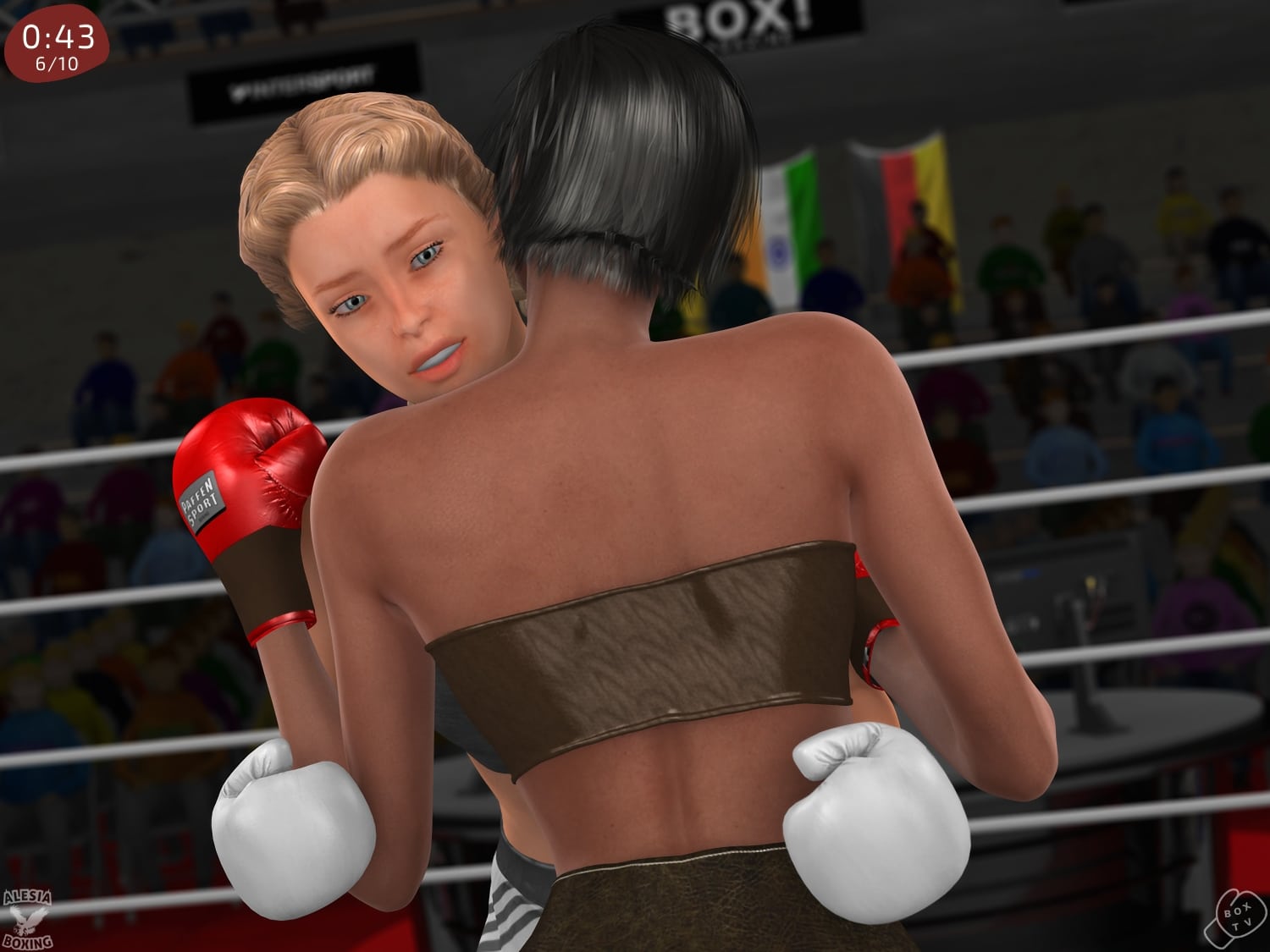 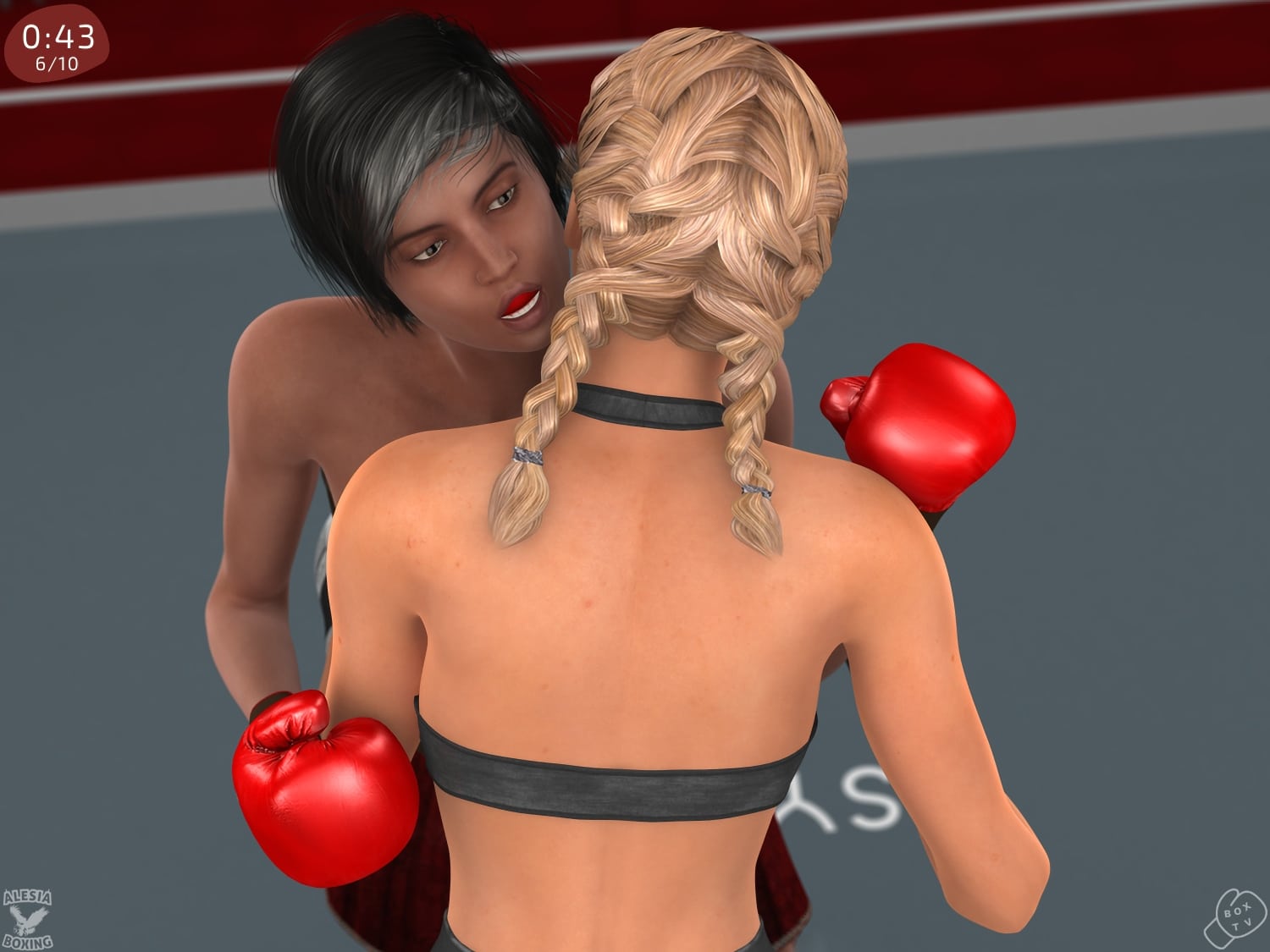 Conscious that her opponent is running away with the lead, Ally gets back into the fight in Rounds 7 and 8. She hits the fifth gear with a Philly shell masterclass that even the best fighter in the world finds troublesome.

One of the high points for the German is at 0:53 in Round 8, when she makes Zohana miss with a right cross. Then, she comes in, grabs the falling arm, pulls gently and hits the Indian with a right hand on the cheek. Paff. 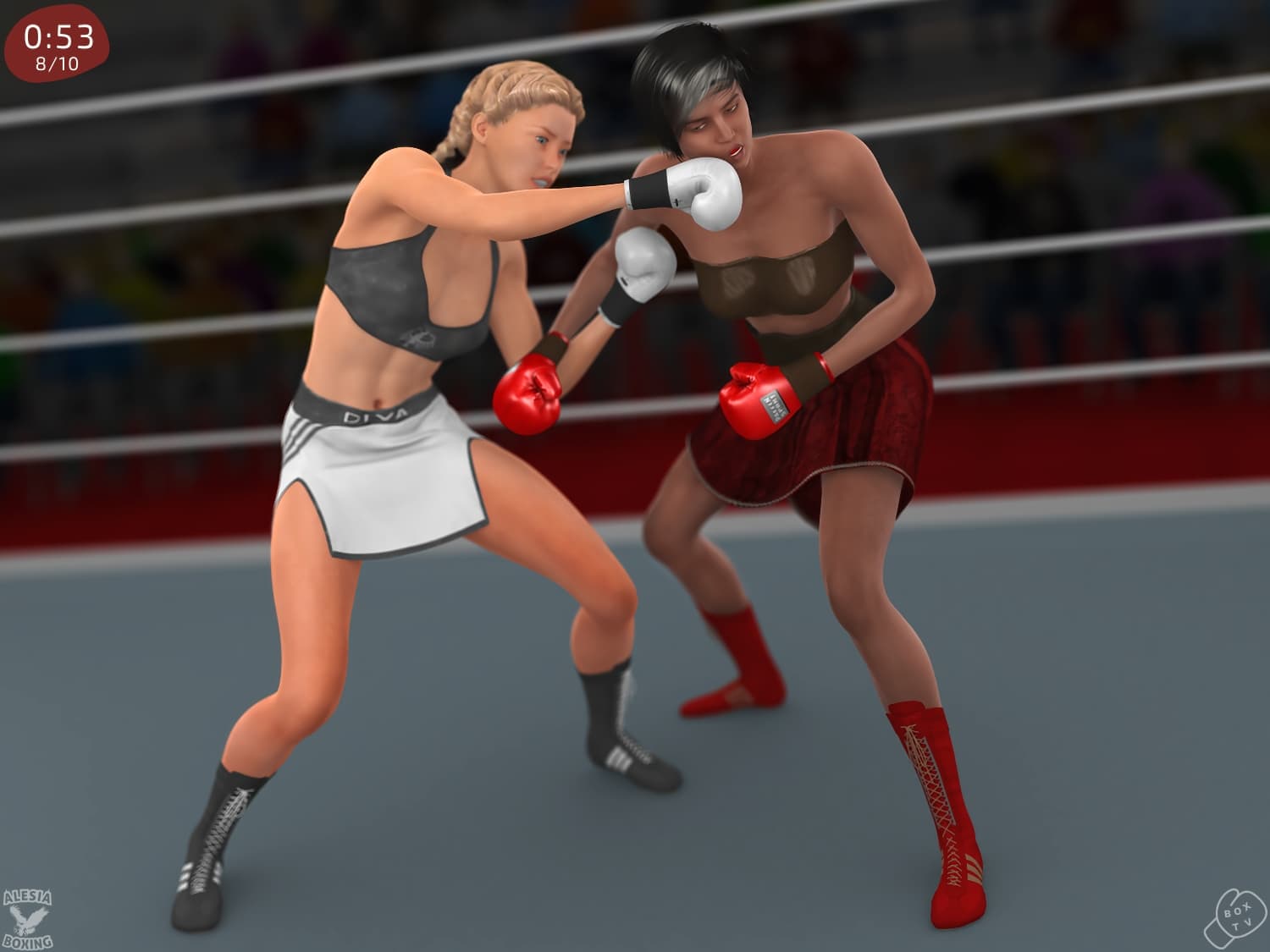 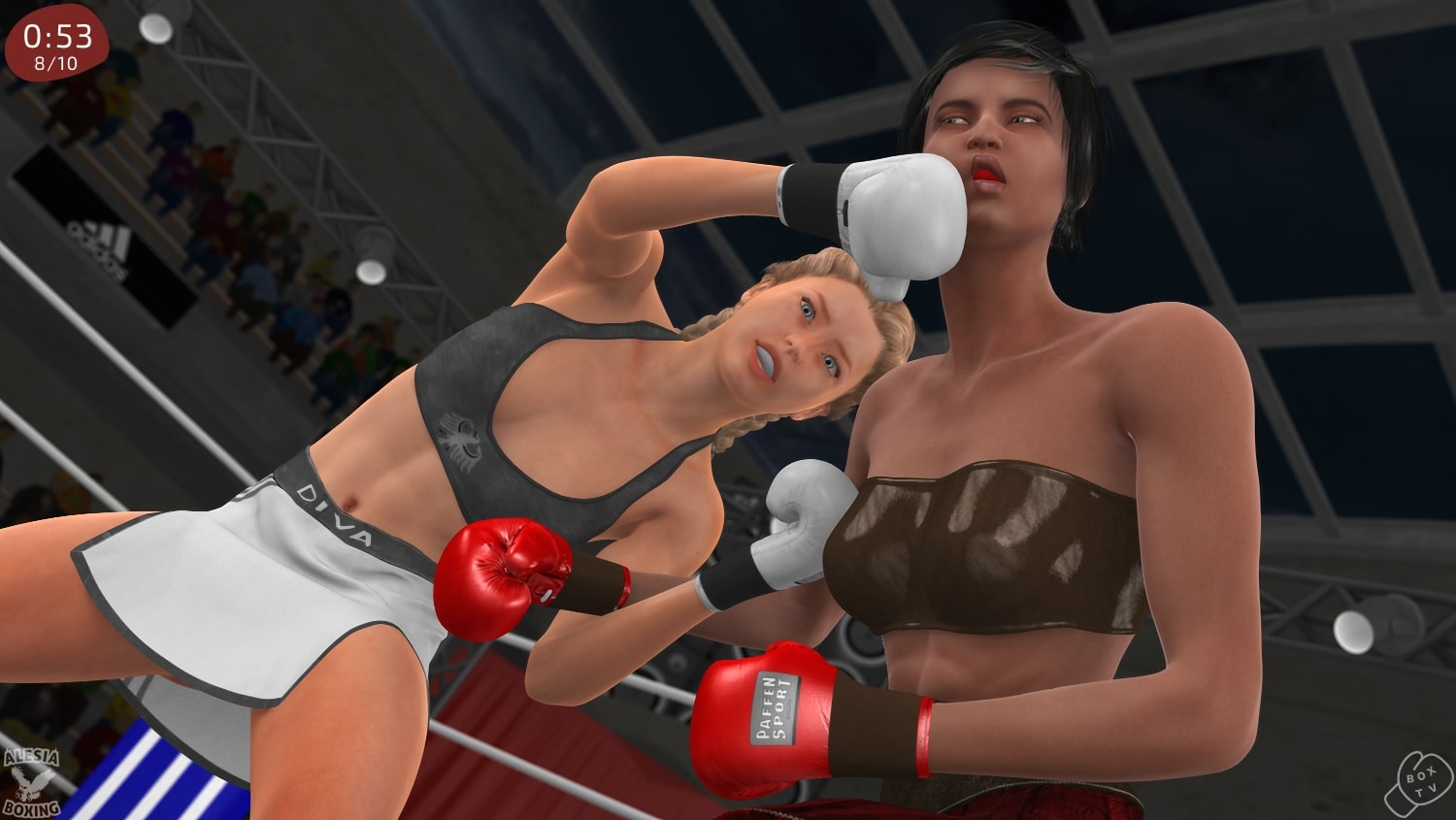 The two warriors agree to go “all out” on speed and technique in the last two engagements. Once again, advantage Patel. She outboxes Alesia with maddening twists, turns and pivots thanks to agility and creativity that no fighter has matched yet.

Exhibit A is the last clean punch she lands in Round 10. Ally wants to settle down for a jab, but Miss Patel threatens to throw a fast right cross. This makes the blonde go for a shoulder roll. By the time she is doing the right thing, the Indian had already stepped outside to the left. She has no problem crushing her cheek with a long curling left hand.

Ally thinks: “How the fuck can anyone do this?” 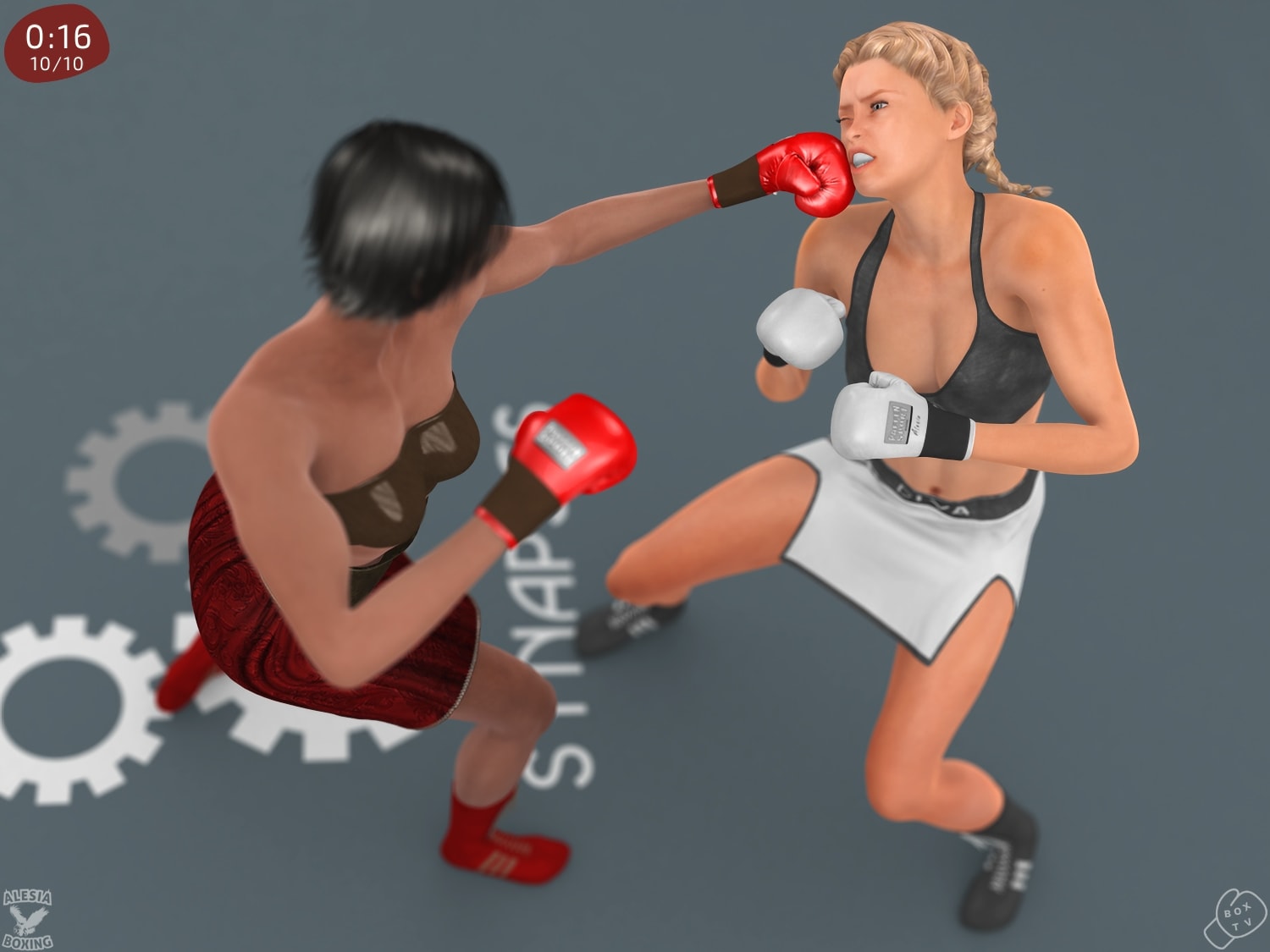 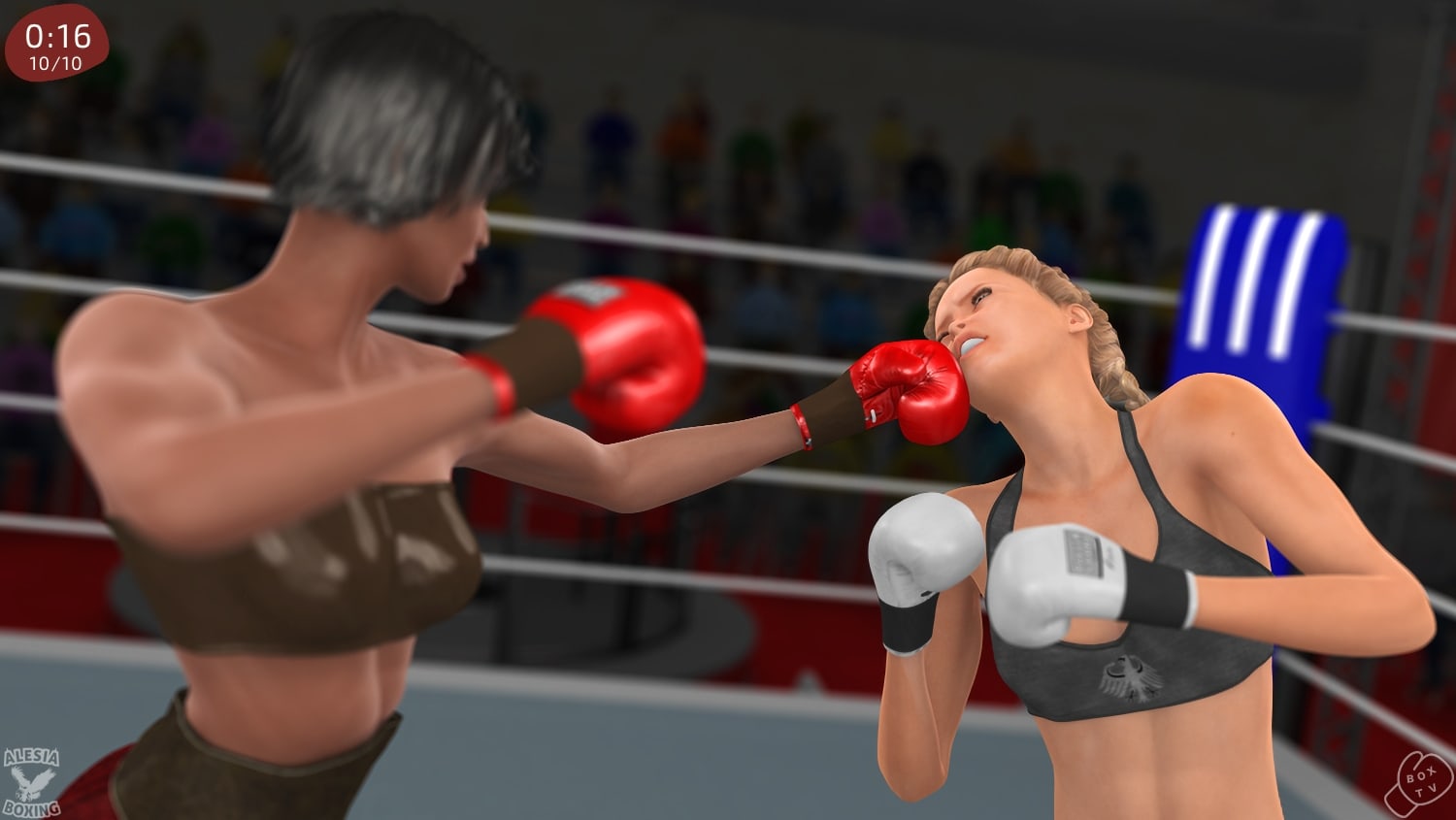 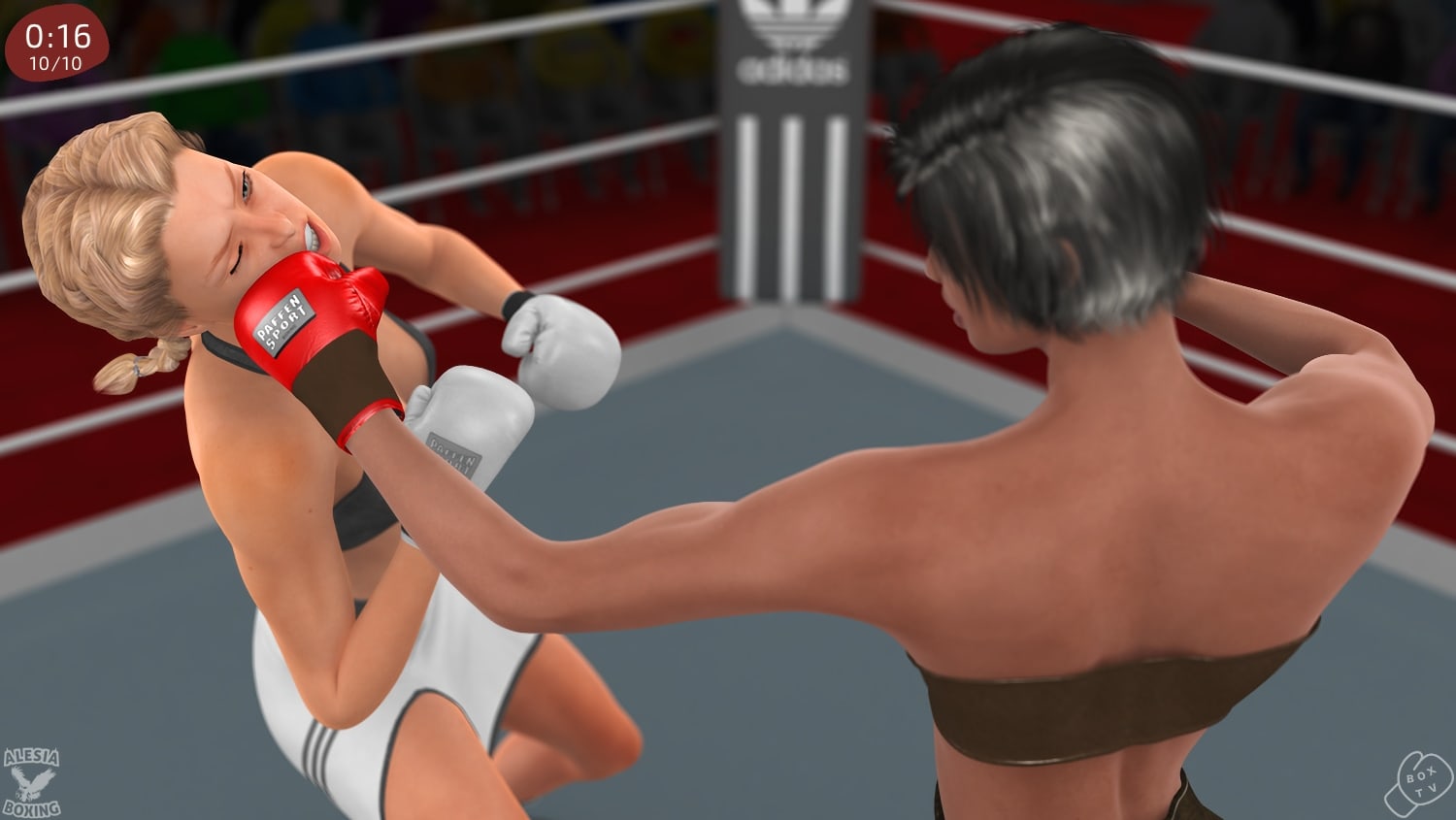 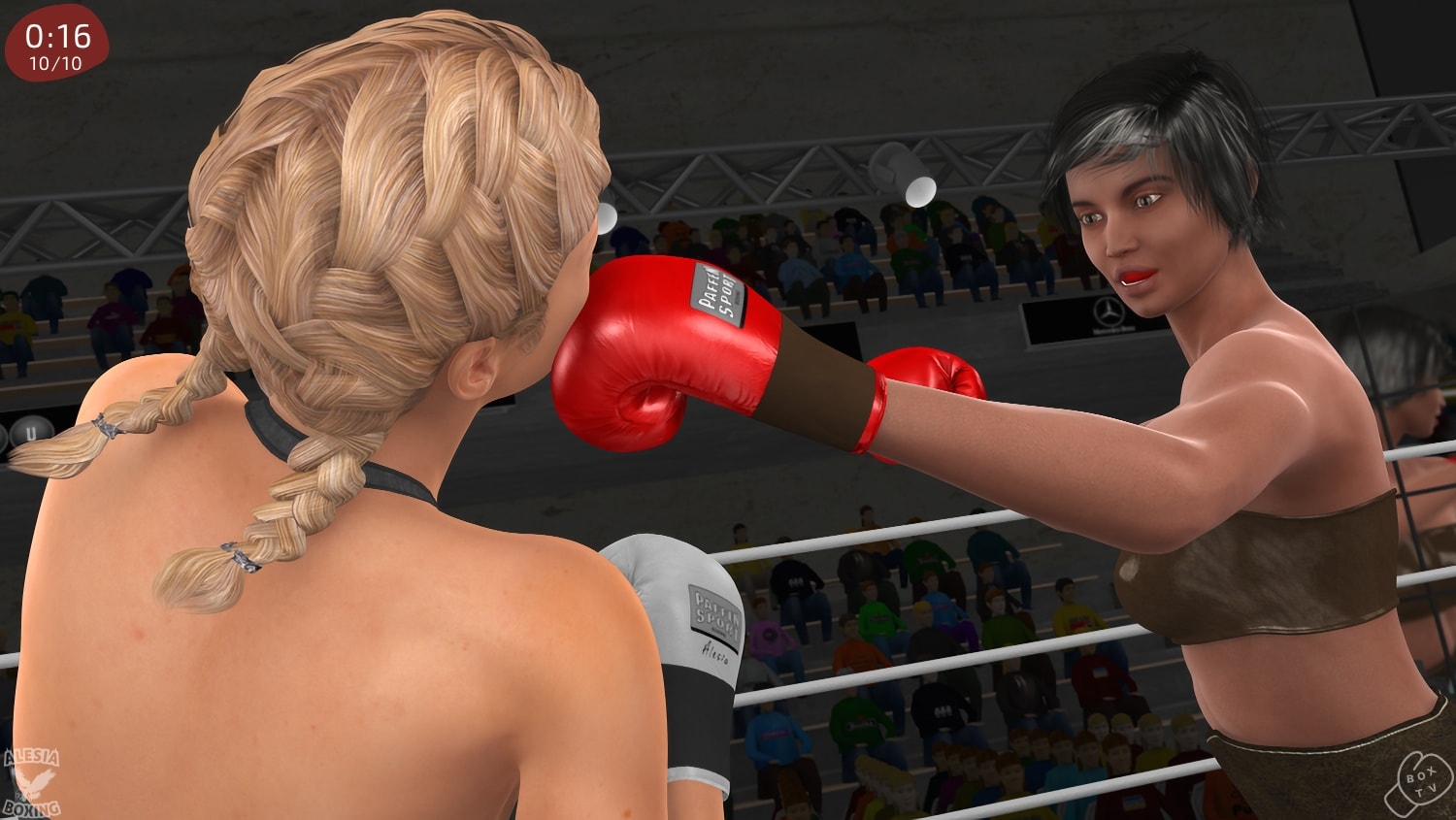 The crowd cheers after 10 rounds of action. The two boxers give each other a hug and get ready for the decision. They both know who’s winning it.

Veronica: “The three judges score this bout 97 to 93 in favour of the winner, by unanimous decision… Zohana ‘The Dementor’ Patel!”

Alesia’s professional record moves to 12-3 but since this was an exhibition, she doesn’t lose her Super Lightweight belt. This fight has helped both to demonstrate skills at the highest level. 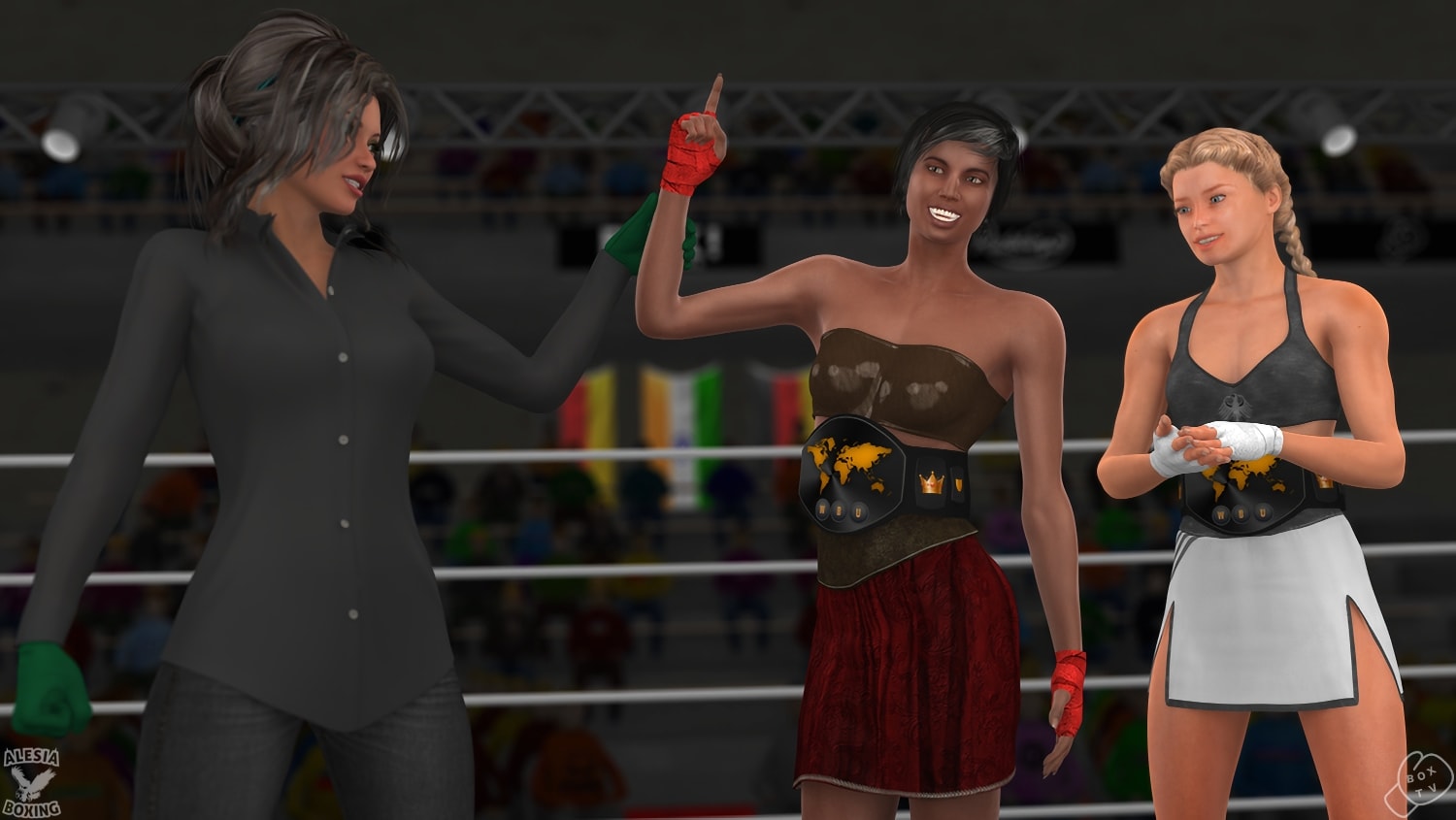 Esther Schouten has the pleasure of interviewing both.

Zohana: “That was fun! I think I’ve shown why I’m considered the best fighter in the world, but Alesia is solid by my standards. She behaves herself with class outside of the ring. World champions should be ambassadors of the sport. Alesia is exactly that, and that is something I cherish. Boxing often attracts the talented misfits of society, and we need to provide them with examples to follow. How did you like the fight, Ally?”

Alesia: “Tonight, I got schooled by you for charity instead of comfortably sitting on the sofa and eating chips. Who can say no to that?”

That draws a few laughs.

Alesia: “But seriously, I’m very happy we did this and I back every word you said. If anyone feels like signing up for a boxing gym after watching us at it tonight, it was all worth it. Plus, you can only learn and improve by working with the best and I’ve done that with Zohana tonight.” 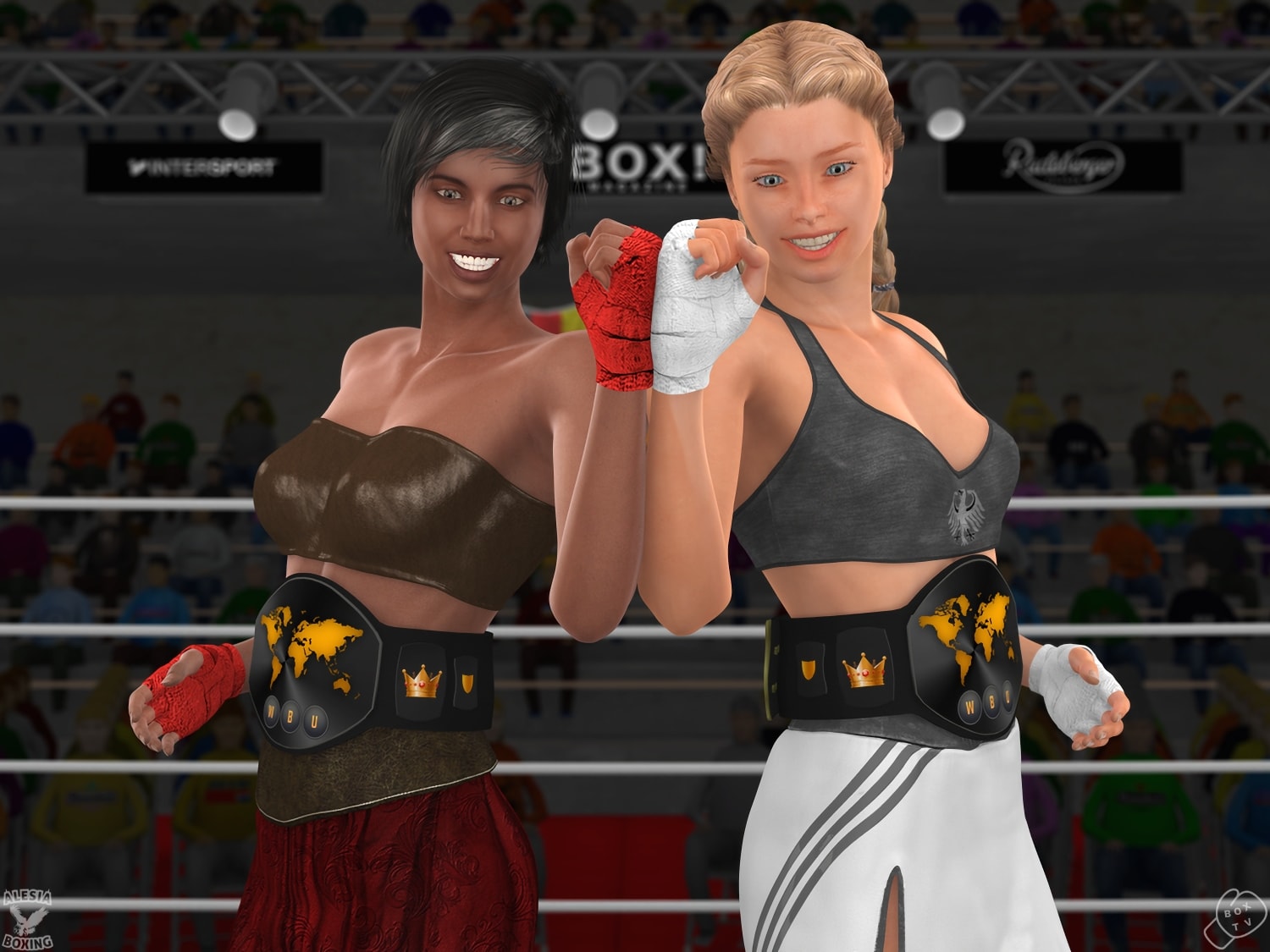 The world champion in the Lightweight division, and top pound for pound fighter. The pride of India with maddening skills.
Profile
basic HTML to style comments