An American veteran takes a new path in a new division

Final Bell Boxing are proud to announce that a veteran joins their ranks immediately. Steffi “The Lady in Gray”” Slater moves from the United States to Germany and moves up in weight classes.

Slater, whose record stands at 22-6 (11 knockout wins) at 44 years of age, is set to move up to the Super Lightweight division. She will be be trained by Maxim Weiss in Berlin.

“I may have done a little soul-searching since my last fight, but the fire to compete is still there, says Slater. I never stopped training six times a week and I’m not done punching people in the face for a living. Final Bell made an offer I couldn’t refuse.”

“We look forward to Steffi delighting boxing fans in German and European arenas, says Heidi Becker, CEO at Final Bell. She’s a gritty veteran and an addition we were looking forward to make.” 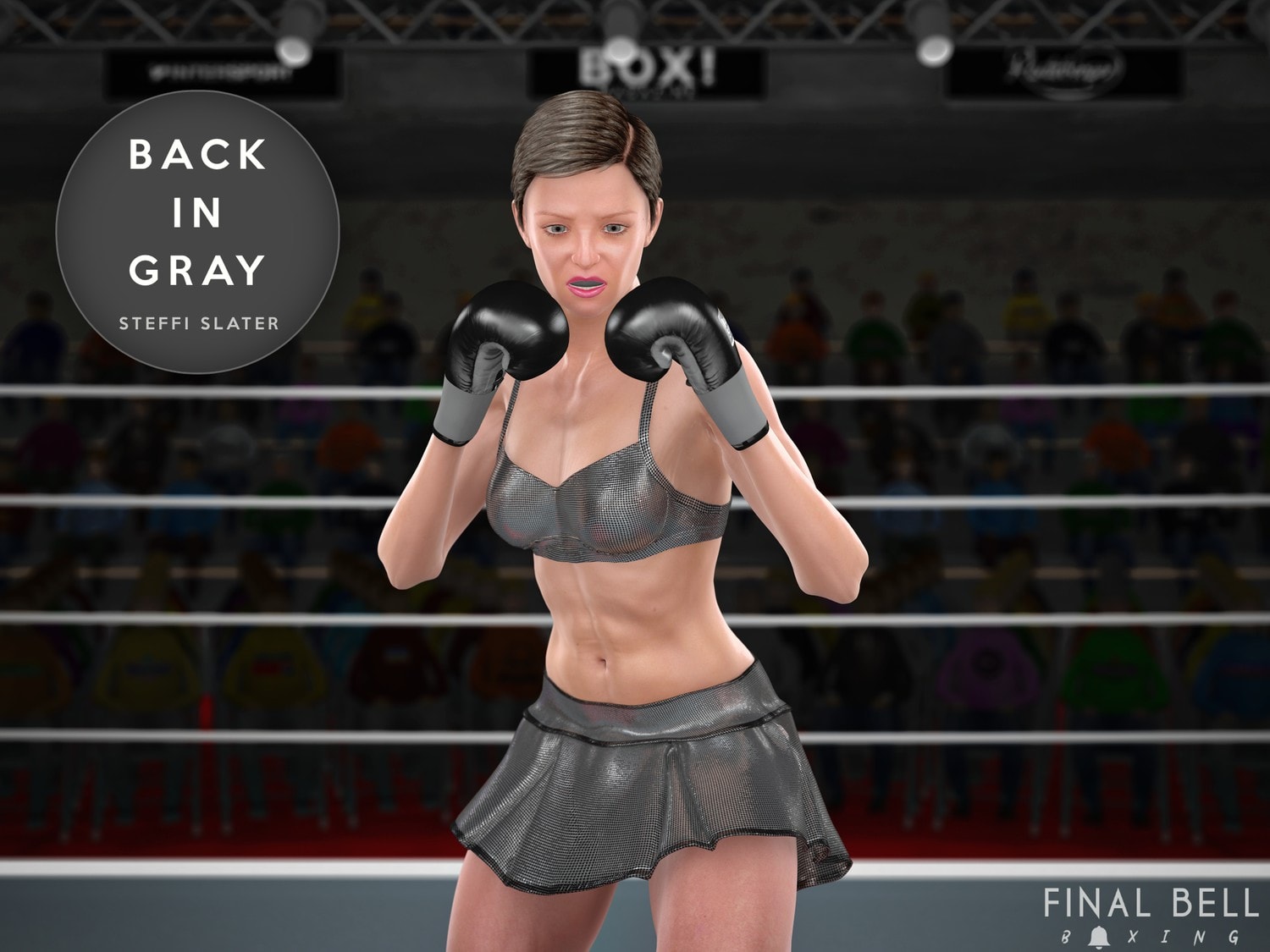 How did this move happen, and why? A business conversation between Heidi and Veronica Lillegard, her Vice President, tells the tale.

Heidi: “So, what do you have to report on the special mission I gave you?”

Veronica: “It’s accomplished. Here’s the contract with Steffi’s signature on it.”

Heidi: “Perfect! I really wanted Steffi on board and you’ve delivered.”

Veronica: “I didn’t blow the budget for the base wage, but she made me go to the upper end of it. Tough negotiator. She only signed when I admitted I had no mandate to hand out more.”

Veronica: “She did get embarrassed by Virani MacVicar. It’s a bit of a gamble.”

Heidi: “I don’t put much thought into that. She stayed at Featherweight for too long. She can’t have fought at full strength because the weight cuts are draining with age. Going from 126 to 140, she won’t even have to cut weight anymore, and she’s a fitness freak. Give her a win and she’ll be 23-6. That’s a strong record.”

A challenger for Alesia?

Heidi: “Yeah. They will quickly give her a good ranking. She’ll be in the mix as a title contender, and an option for Alesia. Look what happened when Chloé got injured. We need more selection. We had to scramble to save the day.”

Veronica: “Interesting. If we do make that fight, it might be more of a quality tune-up for Ally than anything else, though.”

Heidi: “Exactly the point. She’s got the ability to give a champion a solid workout and make the distance. Ally’s generally been in the ring with opponents who have the ability to score the biggest knockouts. We can’t throw her to the wolves all the time.”

Veronica: “I assigned her to Maxim. Good coach, and she’ll be able to live in English in Berlin. That takes out two major worries.”

Veronica: “She’s quite nice in a normal setting even though she’s rough in the ring. And she’s got a hellacious body. All tone and curves. I’m a decade younger and I wish I had that.”

In Berlin, Maxim welcomed his new fighter with a smile and a conversation.

Maxim: “Thanks, Veronica. It’s an exciting new project to work with Steffi. I hope you make yourself at home pretty quickly in Berlin. I’m sure you’ll love it. So, Super Lightweight? What’s your walking-around?”

Steffi: “137 pounds or so. I used to shed a lot before fights. Gotta say it became difficult with time.”

Maxim: “Then you’ll be right at home. Might benefit from putting a little more weight into the punches as well. What’s your real estate situation?”

Steffi: “Final Bell gave the guarantee so I could sign for a flat. Give me a couple of days so I can get settled. I wanna train soon, though.”

Maxim: “Good. I’ll then introduce you to Astrid Olsson, another pro I work with. A few training sessions and we can have a little sparring to put you back in the mood.” 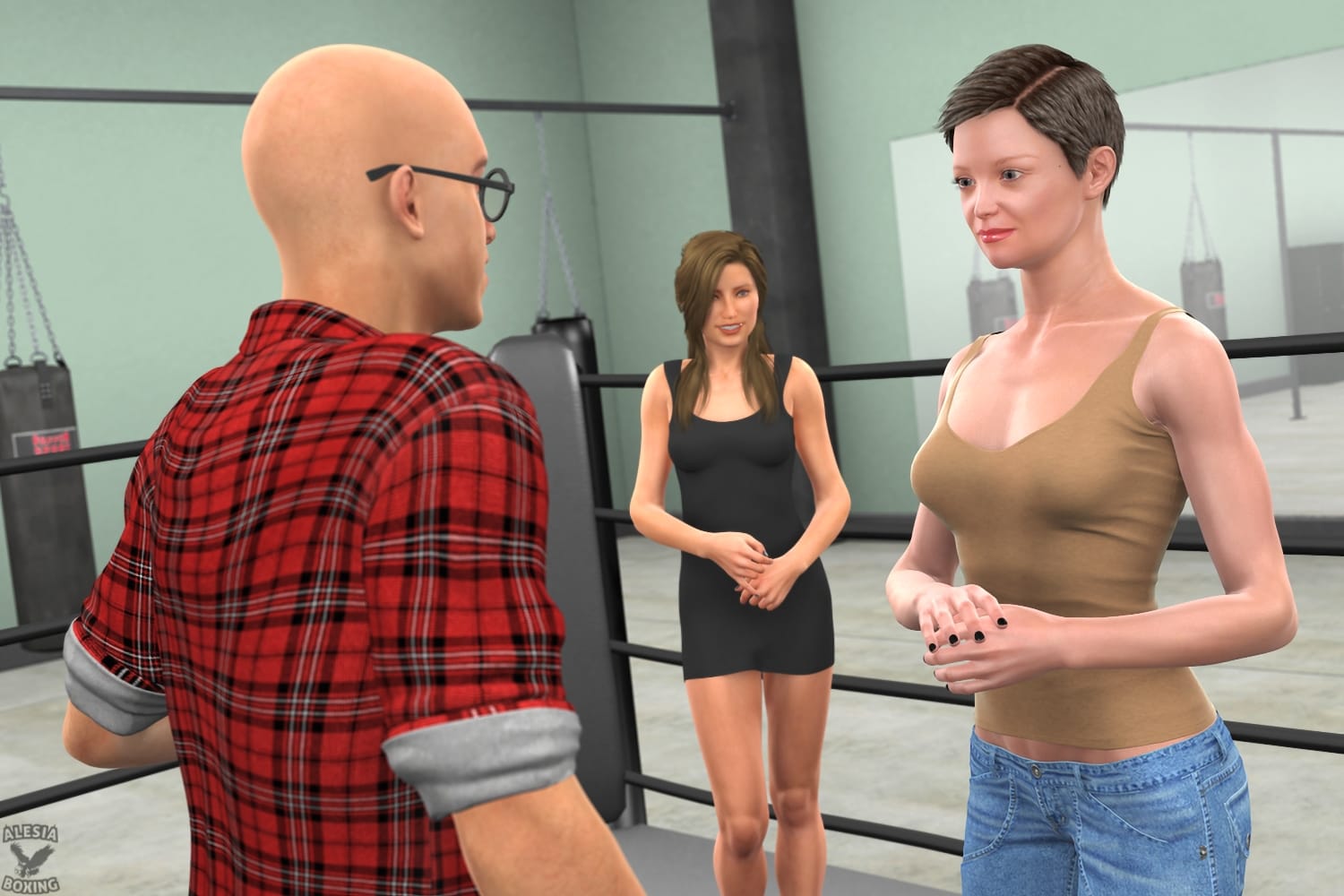 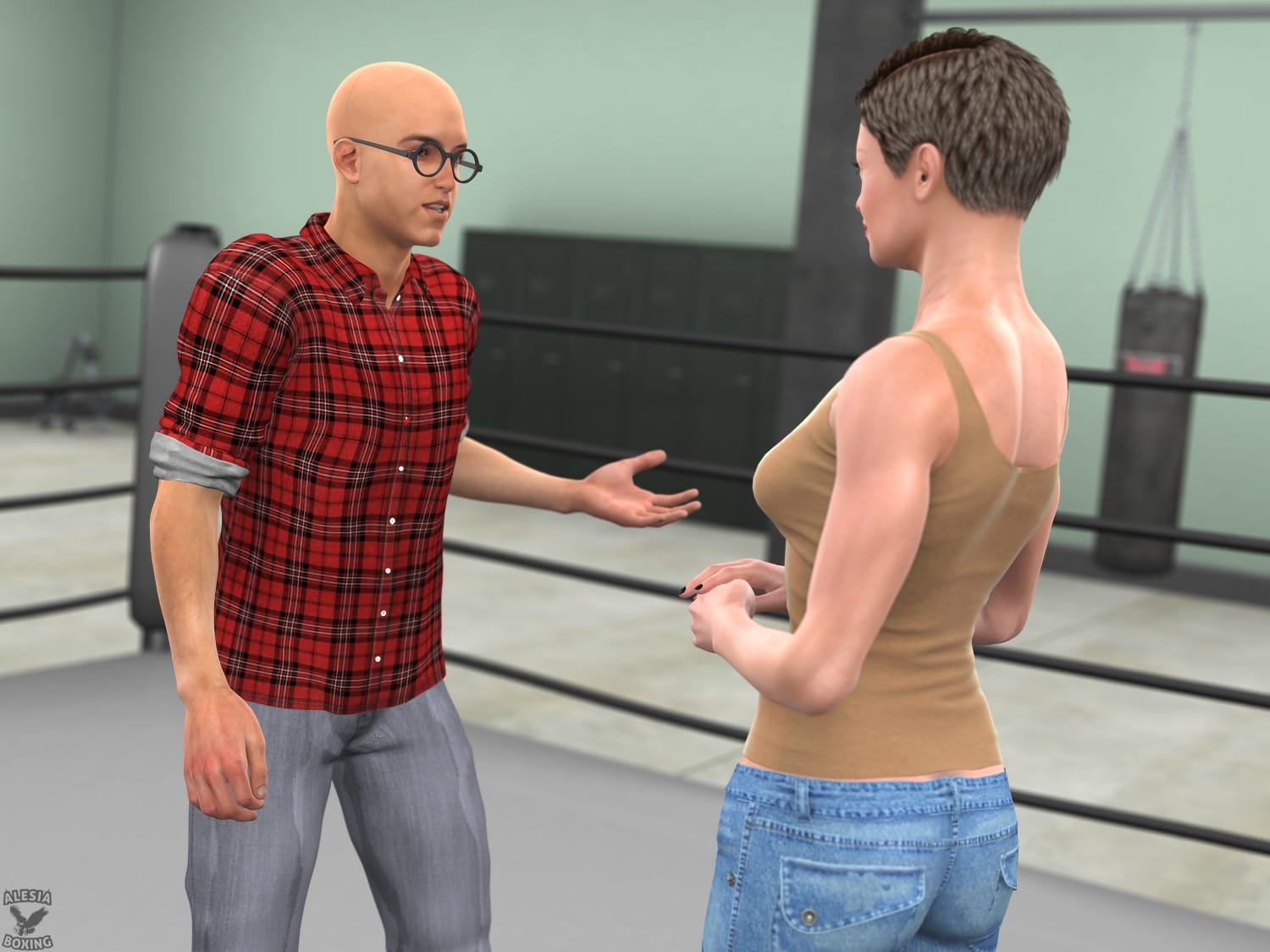 About a week later, Steffi has done some training and got familiar with Maxim’s methods.

Maxim: “Let’s knock off the ring rust, shall we? Let’s have a little four-rounder with light action. Just know that Astrid is fun and a little crazy.”

The Swede is quick to put the American under pressure. Steffi works a little defense, and she’s tentative in the first couple of rounds. 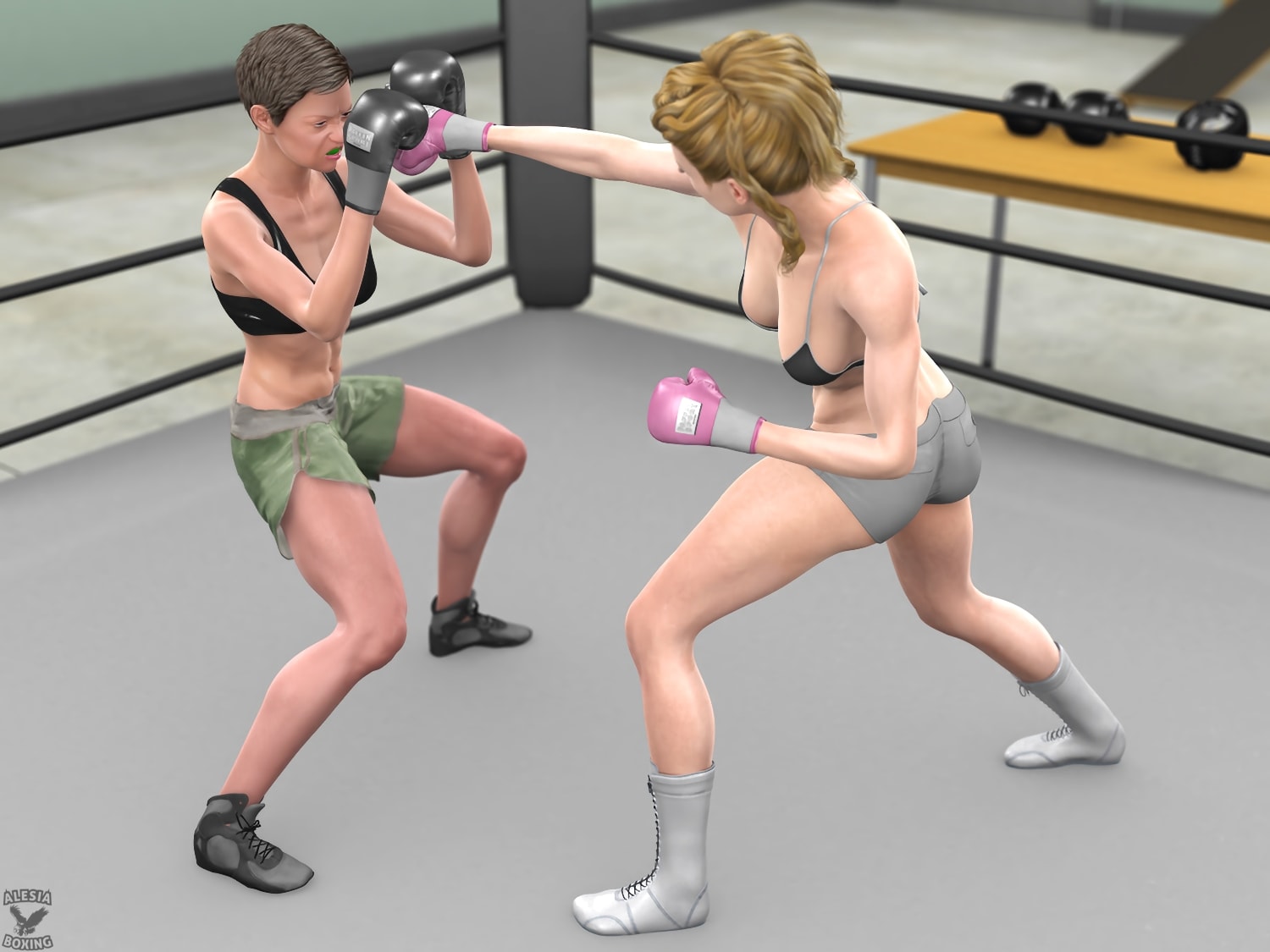 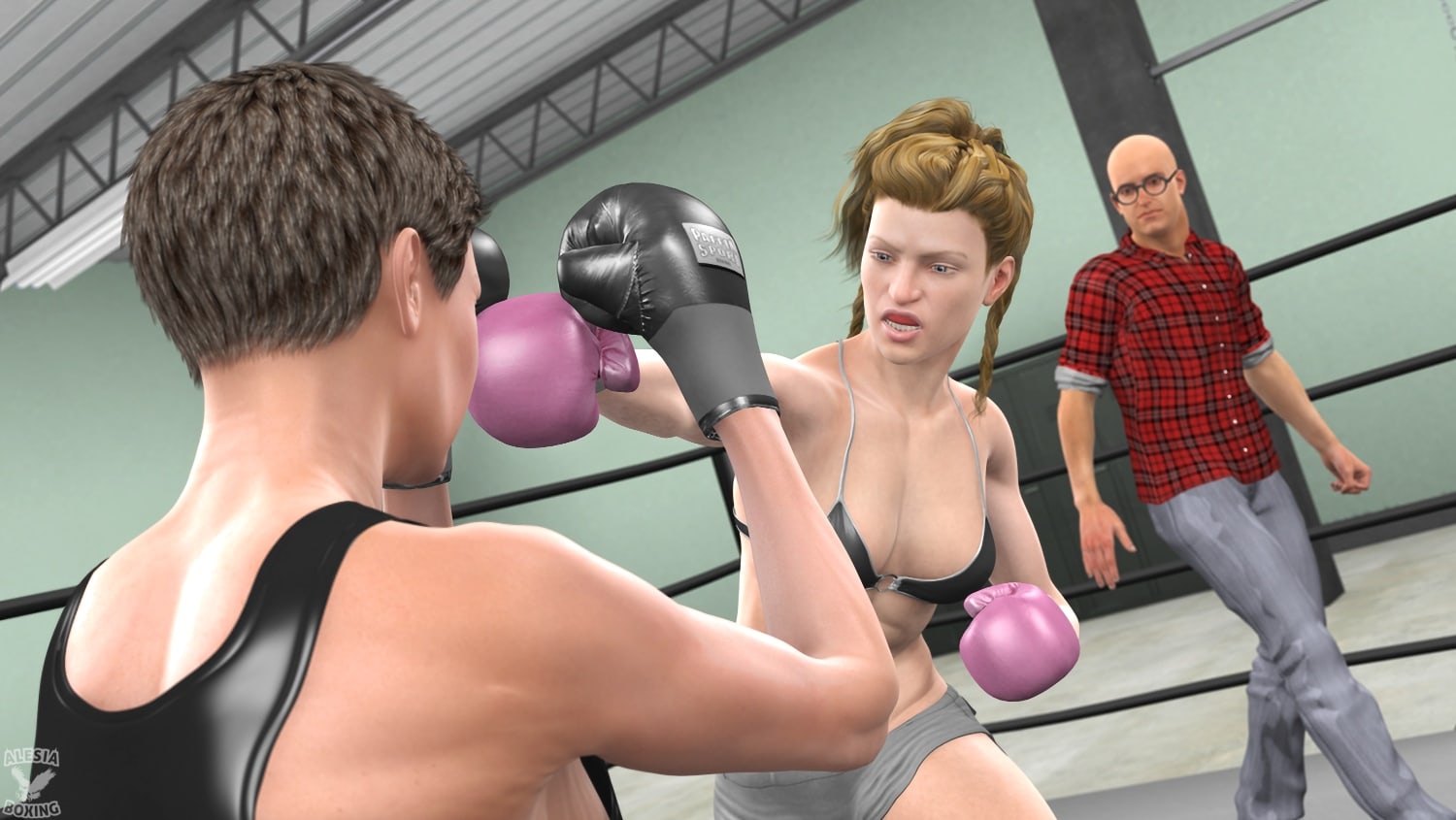 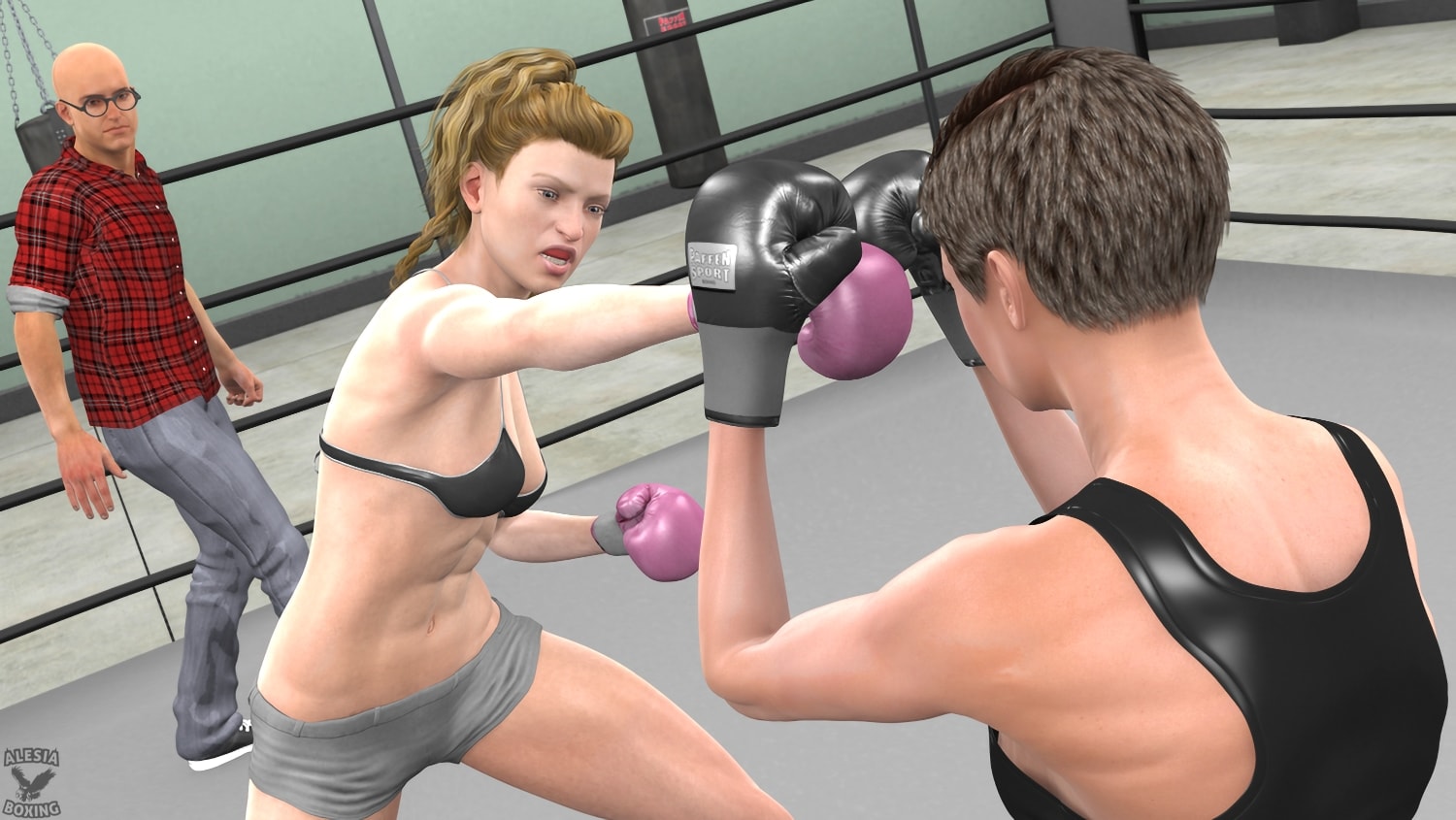 Waking up the beast

Maxim: “Come on. I want a little more from you, starting in the third. Let your hands go.”

The charming Swede comes up with a solution that matches her DNA perfectly.

Astrid thinks: “I know what to do. Gonna stamp a big power shot in the middle of that face. The beast will come out!”

The blonde delivers within seconds as the third round starts. A bit of pressure puts Steffi on the defensive before unloading a short right hand that is one of her trademark punches. Pink leather paffening to test the older woman’s resolve. 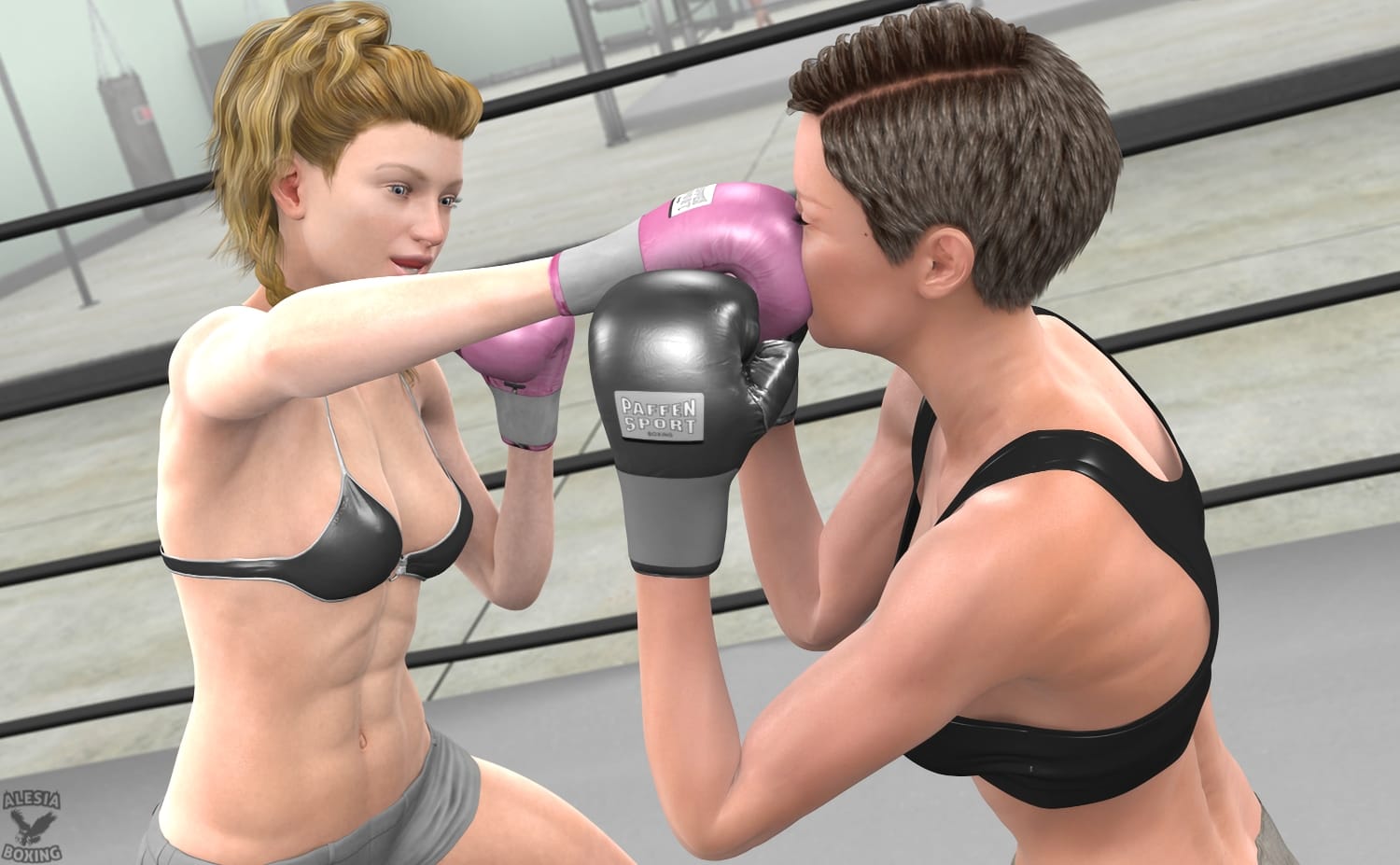 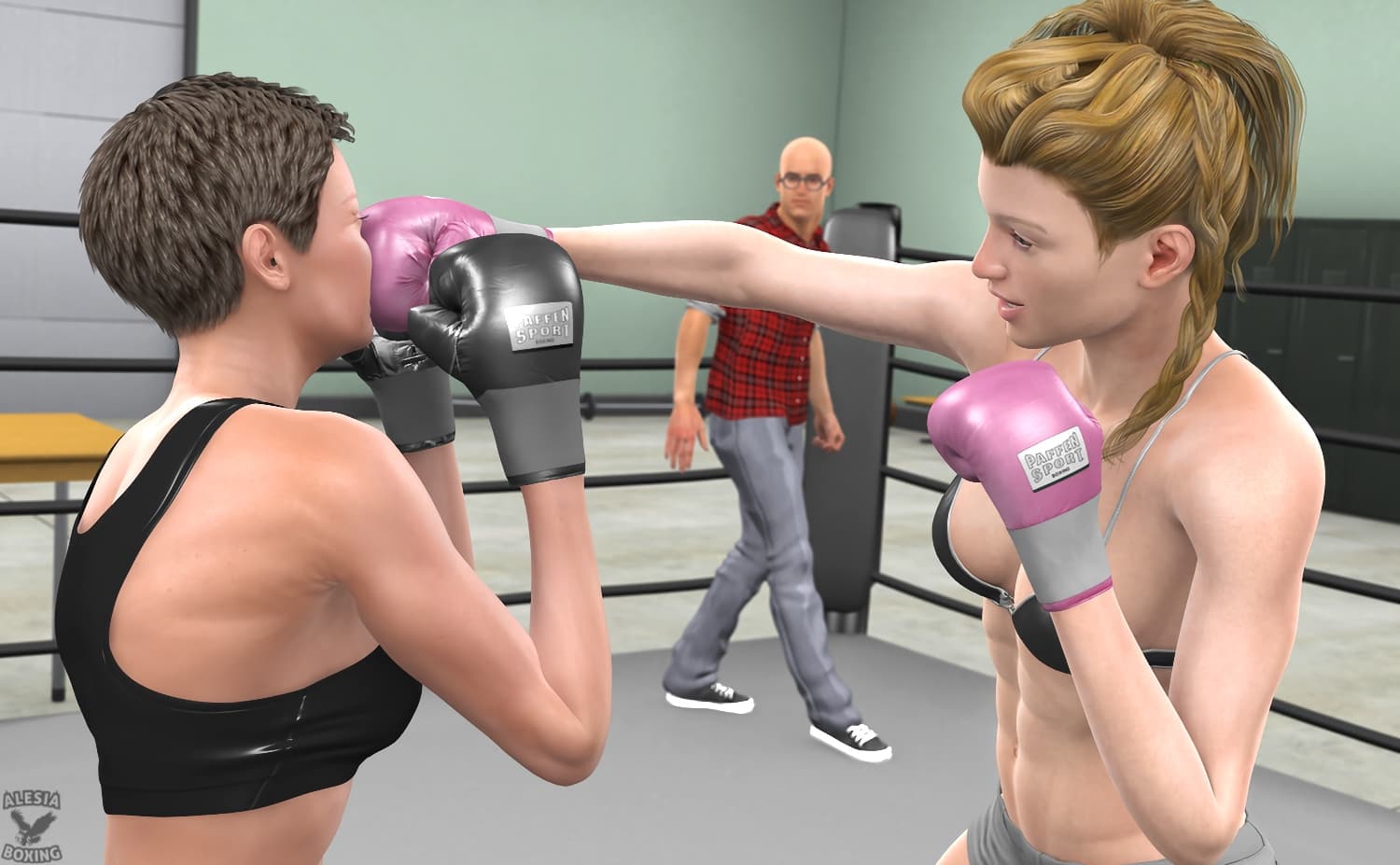 For good measure, Astrid smiles when talking to her counterpart, to wake up the harder side of her.

Astrid: “Liked the taste of that?”

Steffi: “You’ll pay for this, you little shit. Now.” 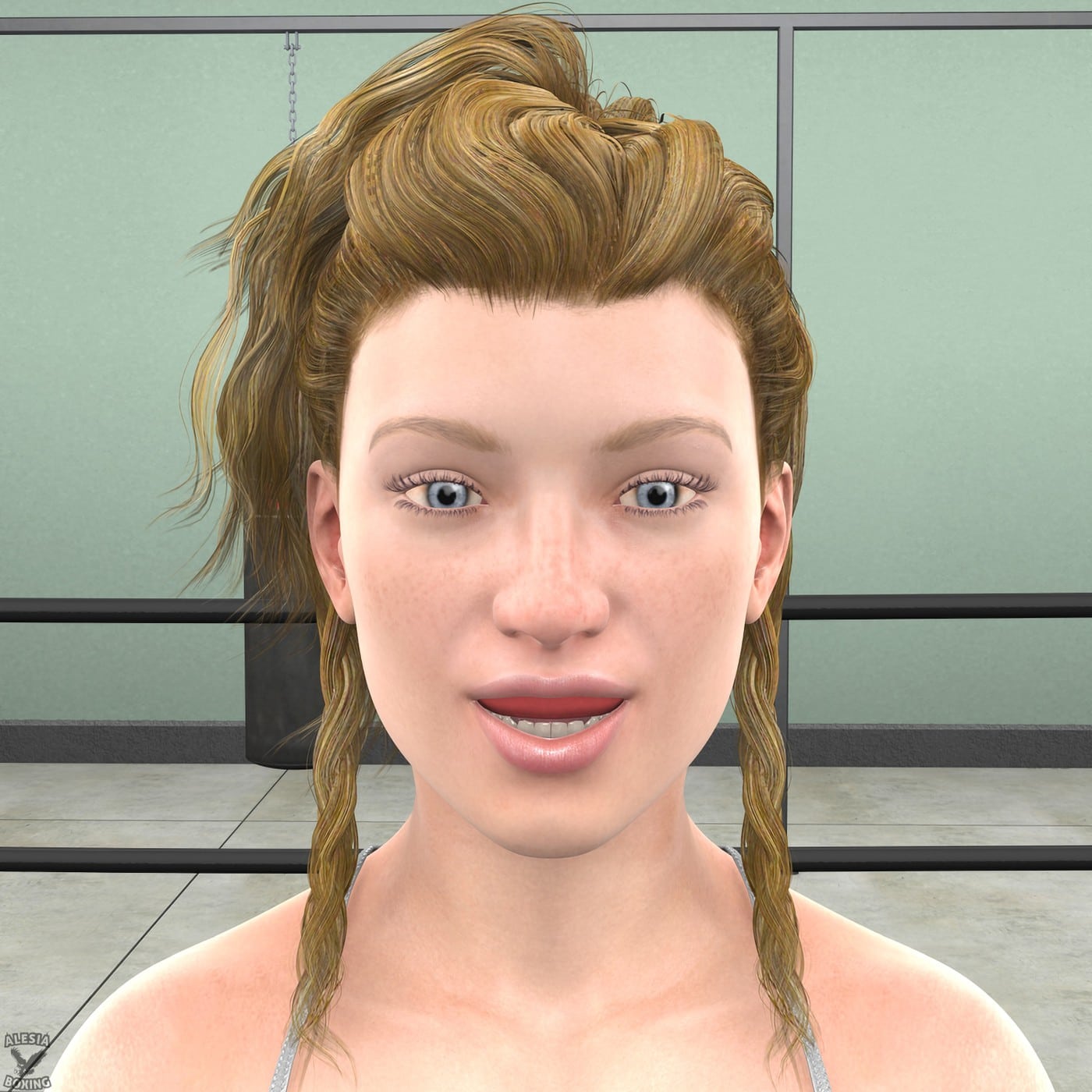 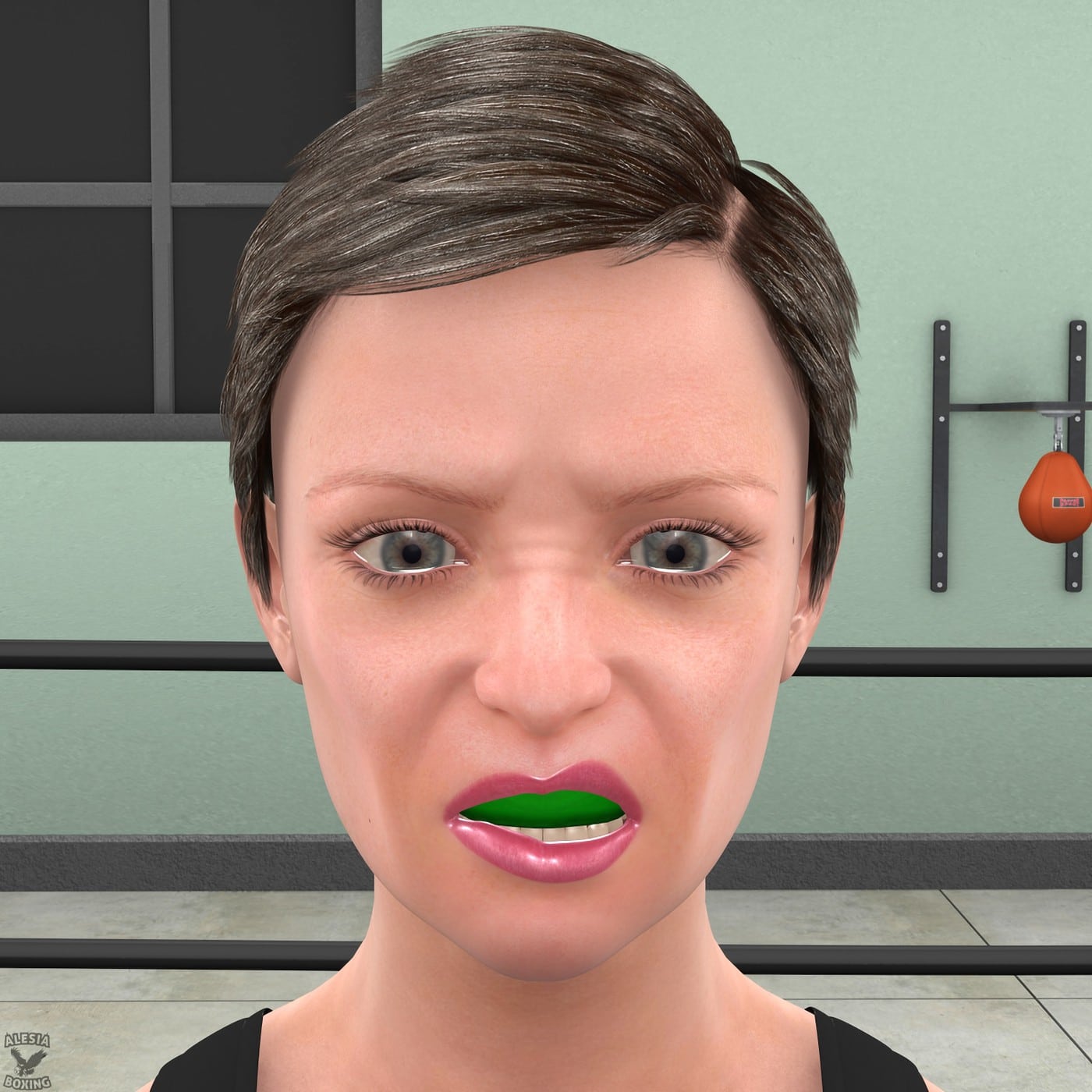 If the Swede wanted to light a fire under the veteran, she can call it a success. Steffi comes after her and uses every trick in the book to dominate the rest of the session, until the buzzer ends it after four rounds.

It’s an intense experience to have The Lady in Gray after you, and Astrid feels every punch that lands. She doesn’t mind, though. She loves the intensity of a good scrap, even though it means getting hit. 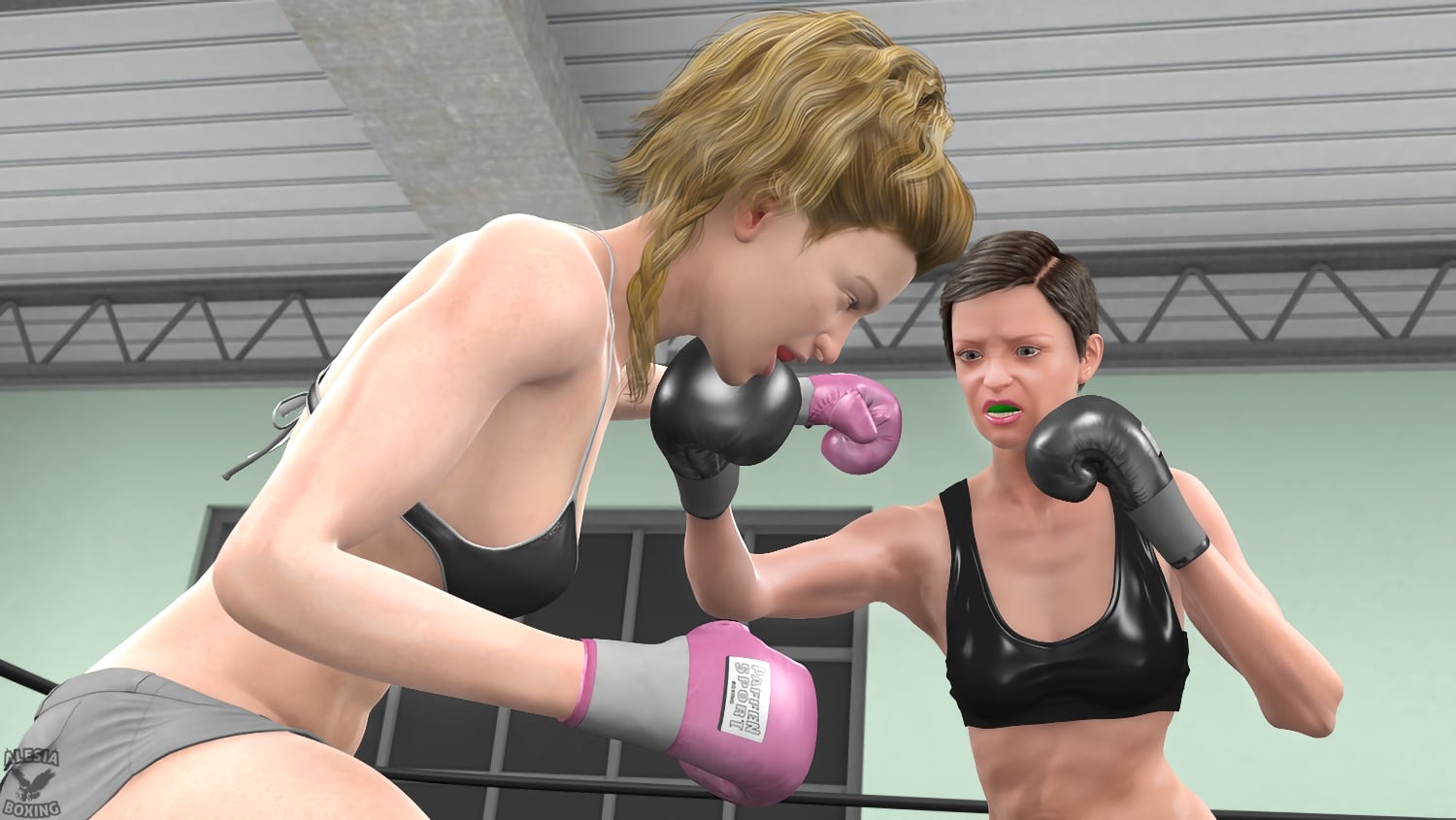 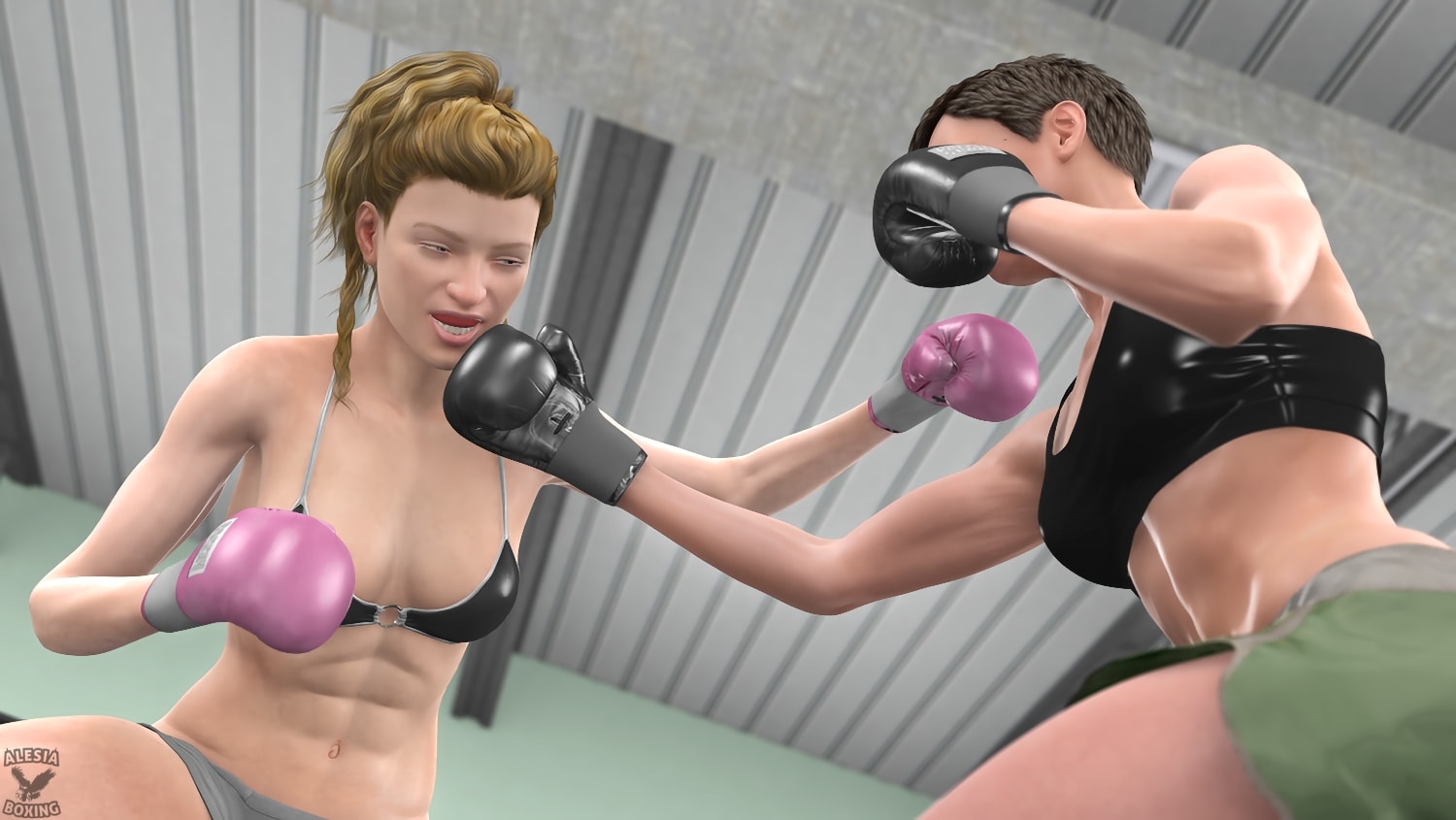 After four rounds of action, Steffi calms down.

Steffi: “Hey. Thanks for the work. I got a little intense.”

Astrid: “Just like it should be! Had to push you a little to get you going.”

Maxim: “Haha! I think you two will get along just fine.”

Born on September 14, 1976, Steffi Slater is a veteran of the game who has joined Final Bell Boxing in Germany for the last stretch of her career.