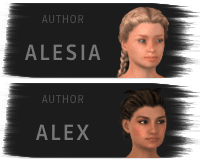 No hard feelings between Alesia and Virani after going to war.

The crowd is still cheering a fantastic knockout of Virani MacVicar, scored by their beloved Diva, Alesia Schumann, at the Olympia Eishalle in Munich.

It takes only seconds after Kanti’s end of the 10-count for Thomas to climb in the ring and get to his fighter. It’s been years since Virani was struck this hard by a punch, and it’s never a fun experience for the Canadian boxer. Kanti takes her mouthpiece out.

Alesia retreats to the red corner to find her coach Regina. They agree that it would be rude to rush to Virani before she’s up.

When she’s ready, the slightly confused fighter groans before taking a sitting position.

Virani: “What happened? I don’t even remember. I’m guessing I didn’t win.”

Thomas: “She landed the big one. The uppercut. The cleanest she ever landed.”

Virani: “I don’t remember that either.”

After brief recuperation, Virani is helped to her feet by the coach and the official. The Germans cheer as it appears that the Canadian will be okay. With a mandatory health check and automatic “knockout suspension” by the World Boxing Union, of course. 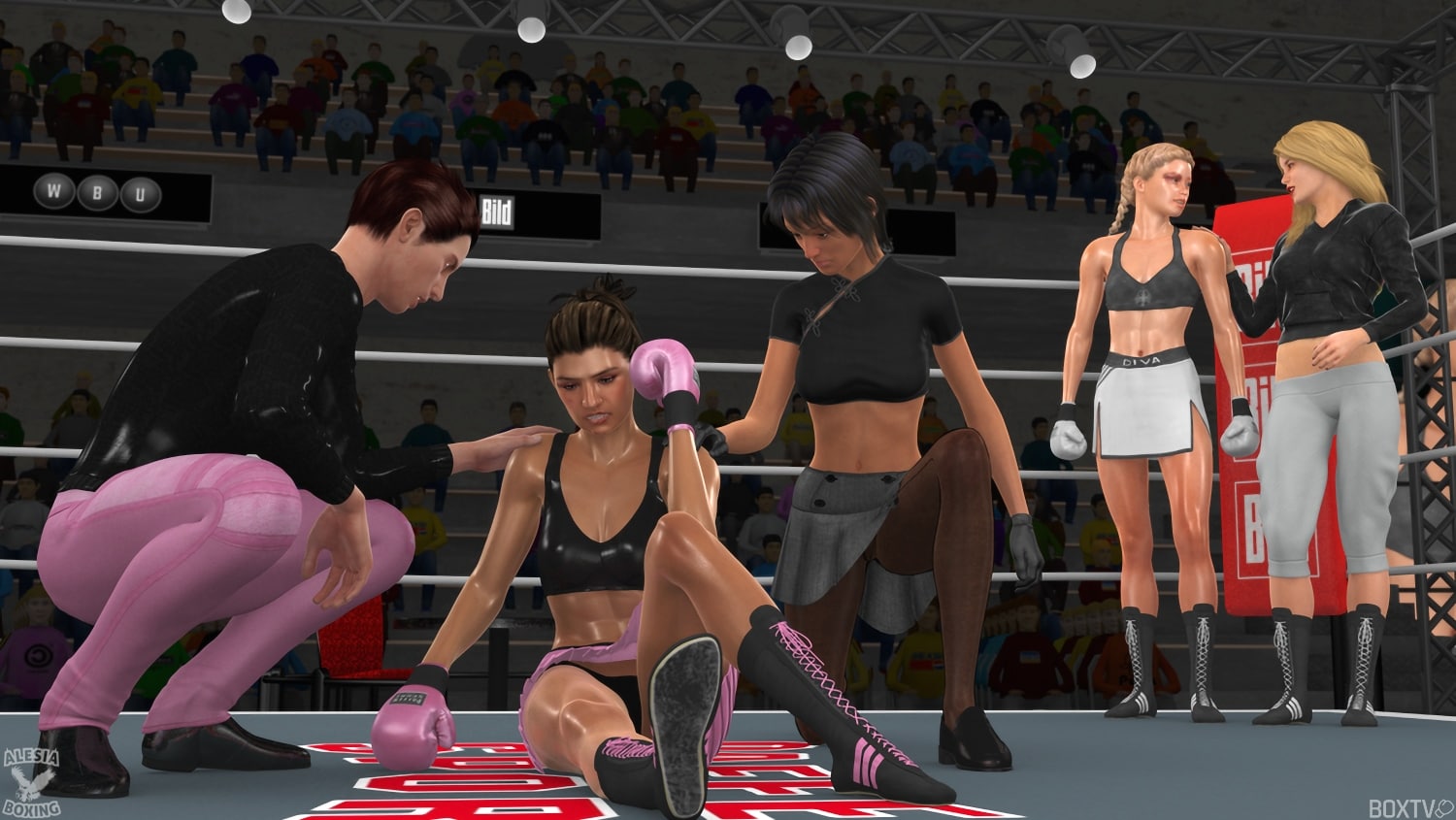 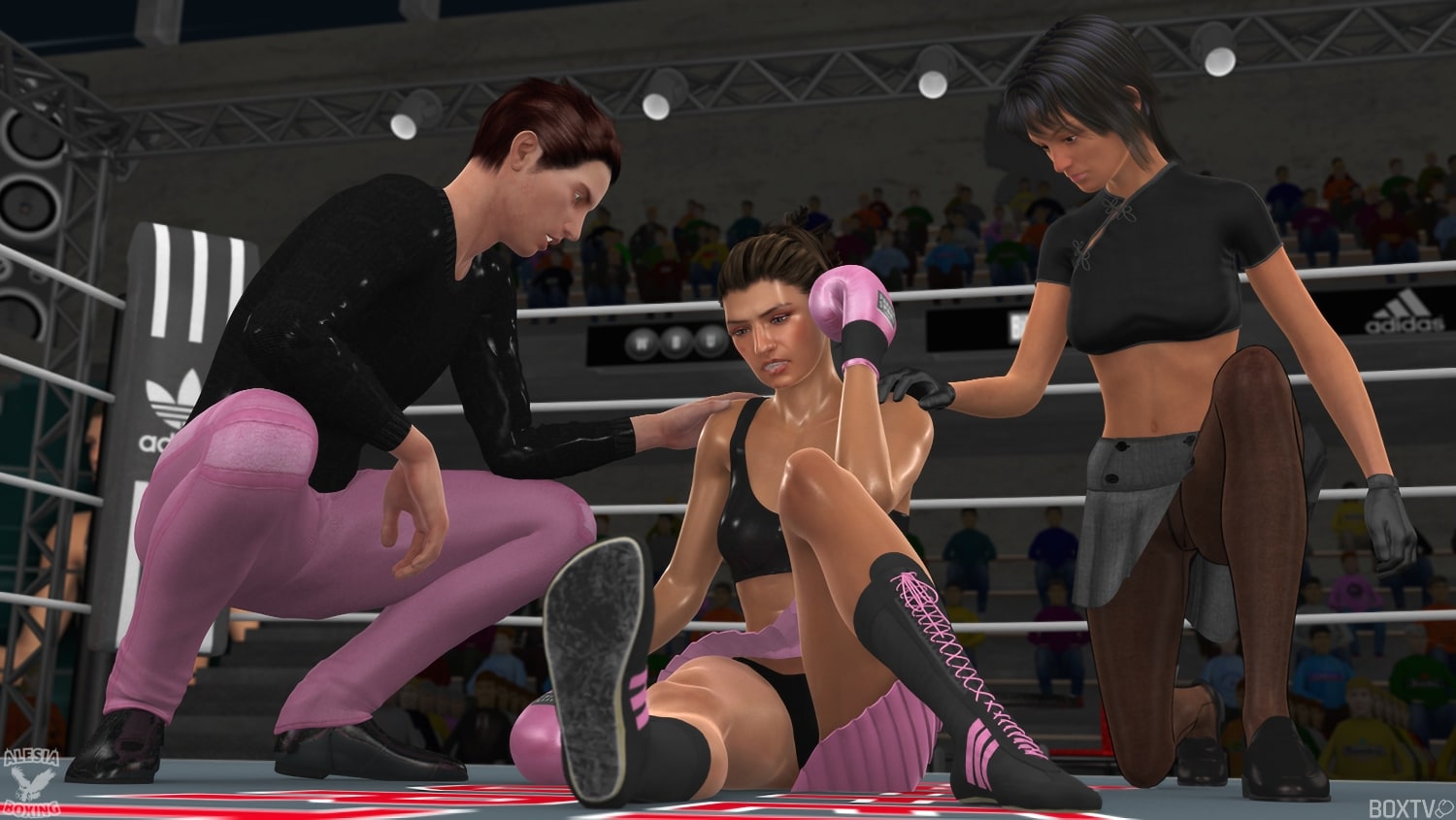 When the Cobra is back on her feet, the Diva takes a tentative look at her. Virani goes to her and they have an embrace. There were violent and mentally rough with each other, but no hard feelings seem to remain.

Virani: “I don’t even remember the punch. It must have been a good one.”

Alesia: “I never want to do this again. Too rough.” 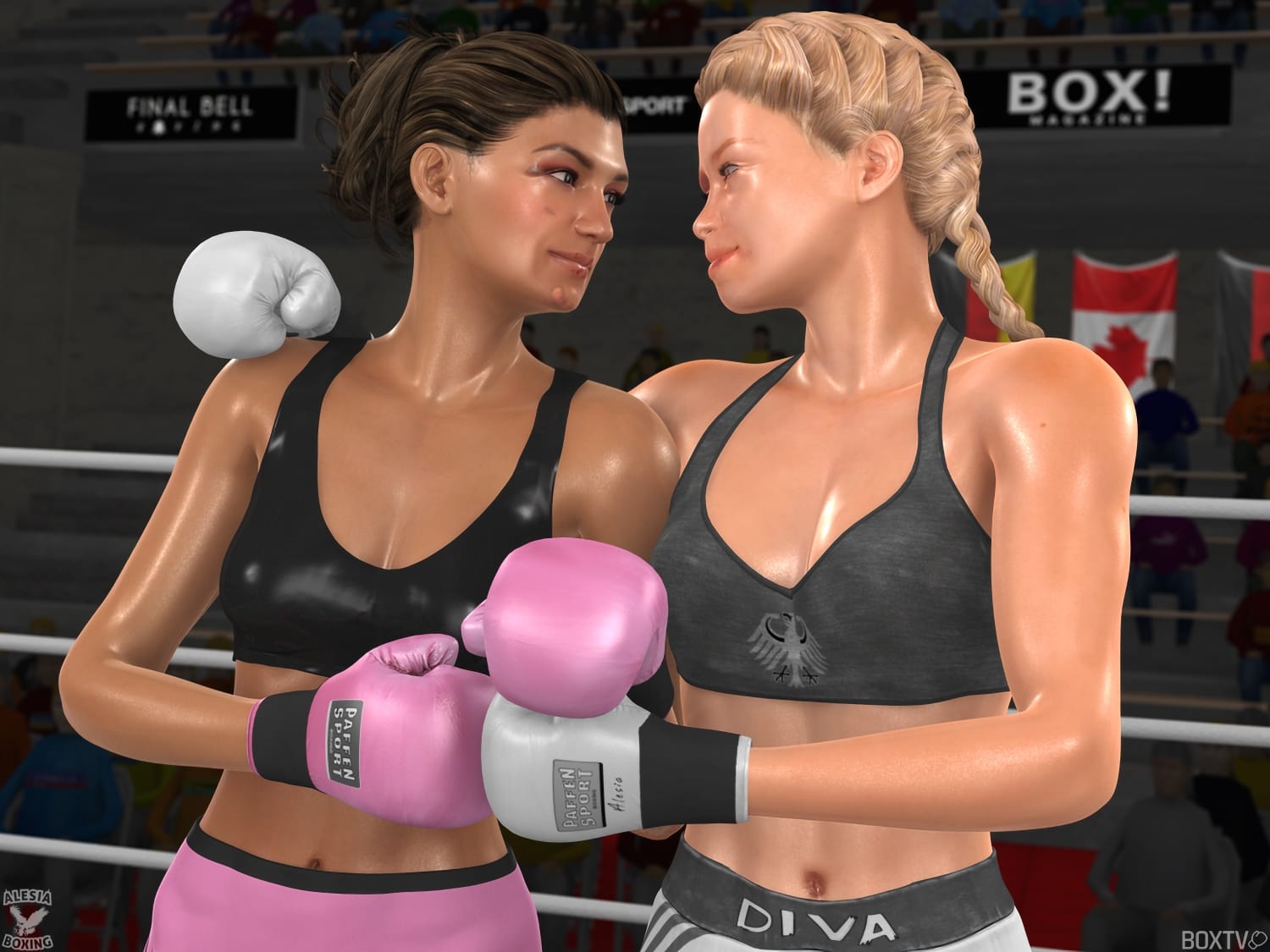 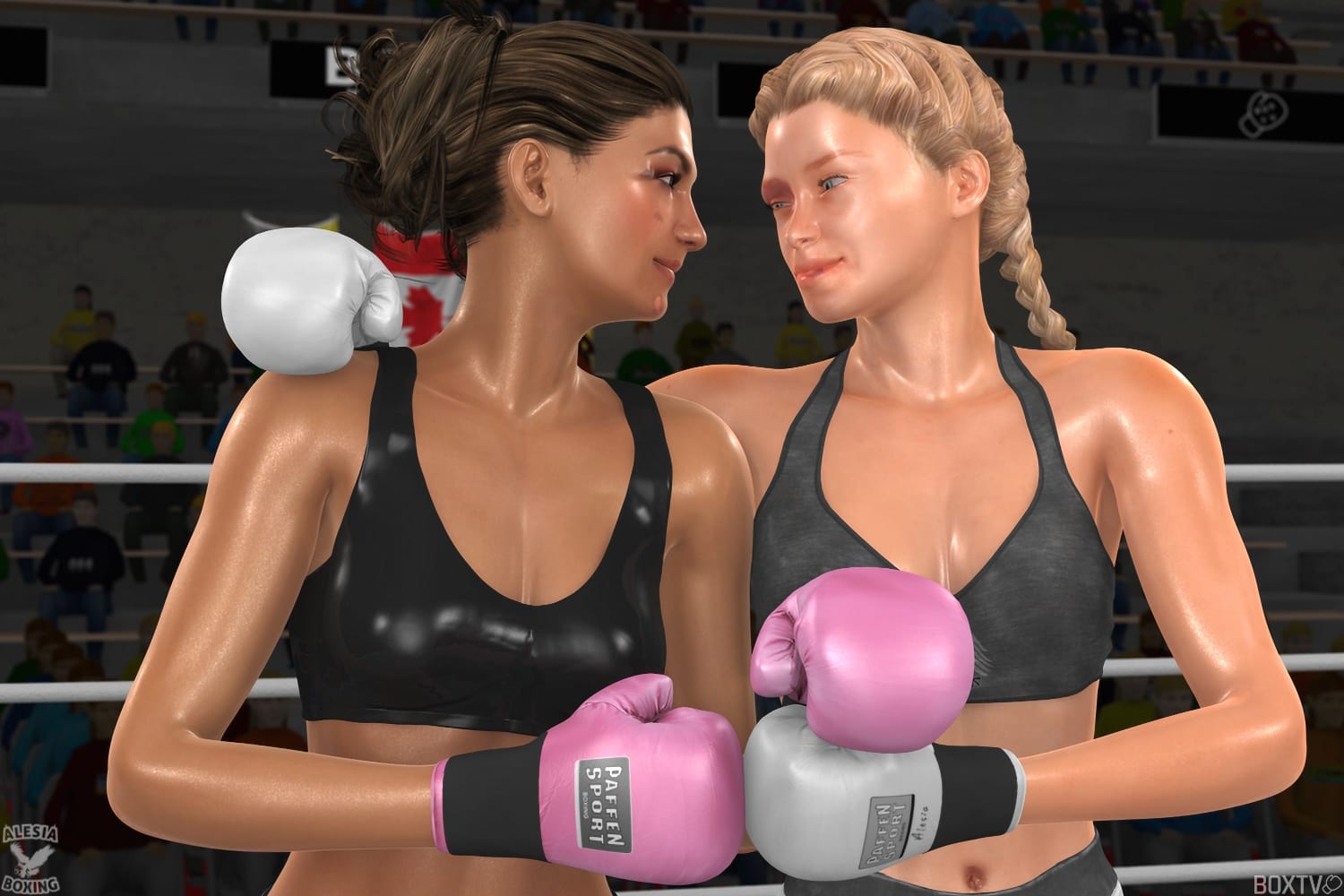 It’s time for the official particulars. Everyone knows exactly what happened, but the rituals of boxing are immovable.

Veronica: “We have a winner at 2:02 in Round 8. By knockout after a cracker of a fight… she is the reigning Super Lightweight champion of the world, the Minister of Defense and the Queen of Uppercuts… Alesia ‘The Diva’ Schuuuuuuumaaaannnnnnnnnn!”

The Munich native gets another warm round of applause and cheers. She notches her 13th win and 11th knockout as a professional.

Esther: “What have we learned from this fight?”

Anna: “Don’t get ambushed by Alesia when she sits down for a power shot. I believe that this knockout demonstrates how hard she hits. Her game isn’t only about stamina and tactics. She flashed the white bombs when she needed a finish.” 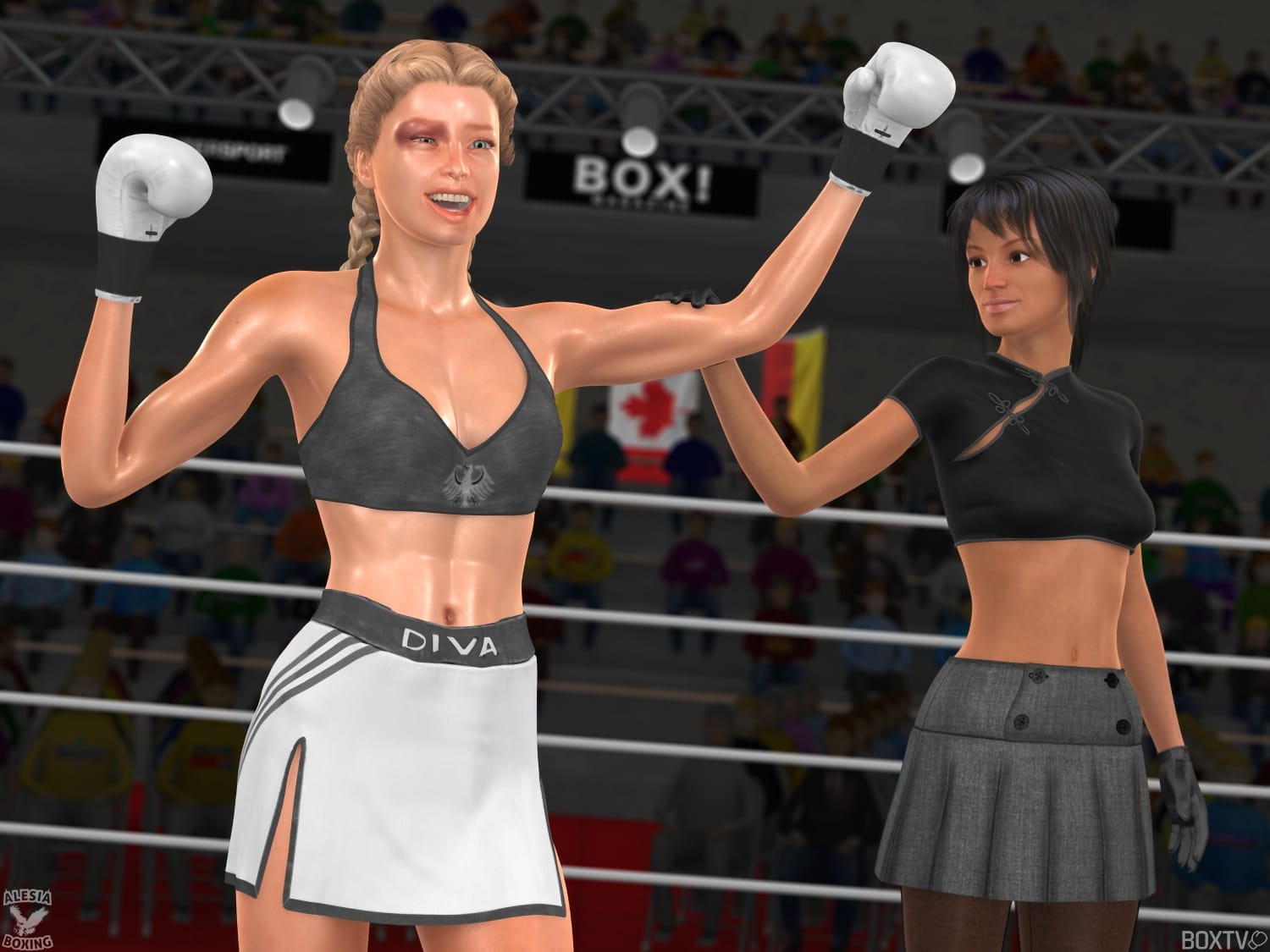 The TV crew moves to the middle of the ring for interviews. Esther is about to give everyone a taste of Dutch bluntness instead of lobbing friendly softballs.

Esther: “Congratulations on the big win. You seem to have punchers’ number. People have to wonder what’s the secret recipe by now, with your firepower always overmatched by theirs.”

Alesia: “I think it’s time for people to respect my punching power. It’s not the only dimension in my game, but there are 11 knockouts out of 13 wins. It’s not like I brought out a wand to cast a magic spell, or like my opponents fall because they want it. My hands make it happen!”

She gets some applause for that answer.

Esther: “Have you accomplished anything by defeating a Featherweight, three weight classes below? Was this just a workout for you?”

Alesia: “Who are you to judge?”

Everyone winces when hearing that.

Alesia: “Come on. I think we should respect the opposition’s fighting ability!”

Another cheer comes out of the crowd.

Esther: “You heard the question. Will you answer it?”

Ally just got cornered by a more journalistic style, which she’s not used to.

Alesia: “Look. We both came to the weigh-in at 133 pounds. It felt like Virani hits harder around that weight, and like I was more vulnerable when taking a clean shot as well. Going down seven pounds was demanding and I believe that the conditions were even. No one did me a favour, least of them Virani. She negotiated the weight and made pink bombs explode in my face.”

Esther: “Speaking of that, you looked shaky for a few rounds. Were you afraid?”

Alesia: “I was bricking it! There’s something scary about having this chick coming at you, because you know she can end a fight with two clean shots. She was eager to give me that treatment, and I felt it even more when she roughed me up. Anyone who says she’s not scary should get in the ring with her. Had to overcome that feeling to get the win.”

Esther: “She still challenged you. Don’t you owe her a rematch?”

Alesia: “No. There’s a difference between being challenged and feeling like you haven’t truly won. And I won this fight fairly. Once I really got going, This was my fight. But credit to Virani for being a solid boxer. I’ll never take that away from her. She deserves a Featherweight title shot and I’m cheering for her to win that.”

She gets another round of applause.

Esther: “One last question. You guys had some heated personal moments in the last minutes. She played mind games on you. Any regrets about any of this?”

Alesia: “The mental battle? I don’t care. It’s part of the sport. What’s difficult is seeing a friend down after scoring the knockout. By contrast, it was less emotionally draining to get floored by her in the third round. Just physically painful.” 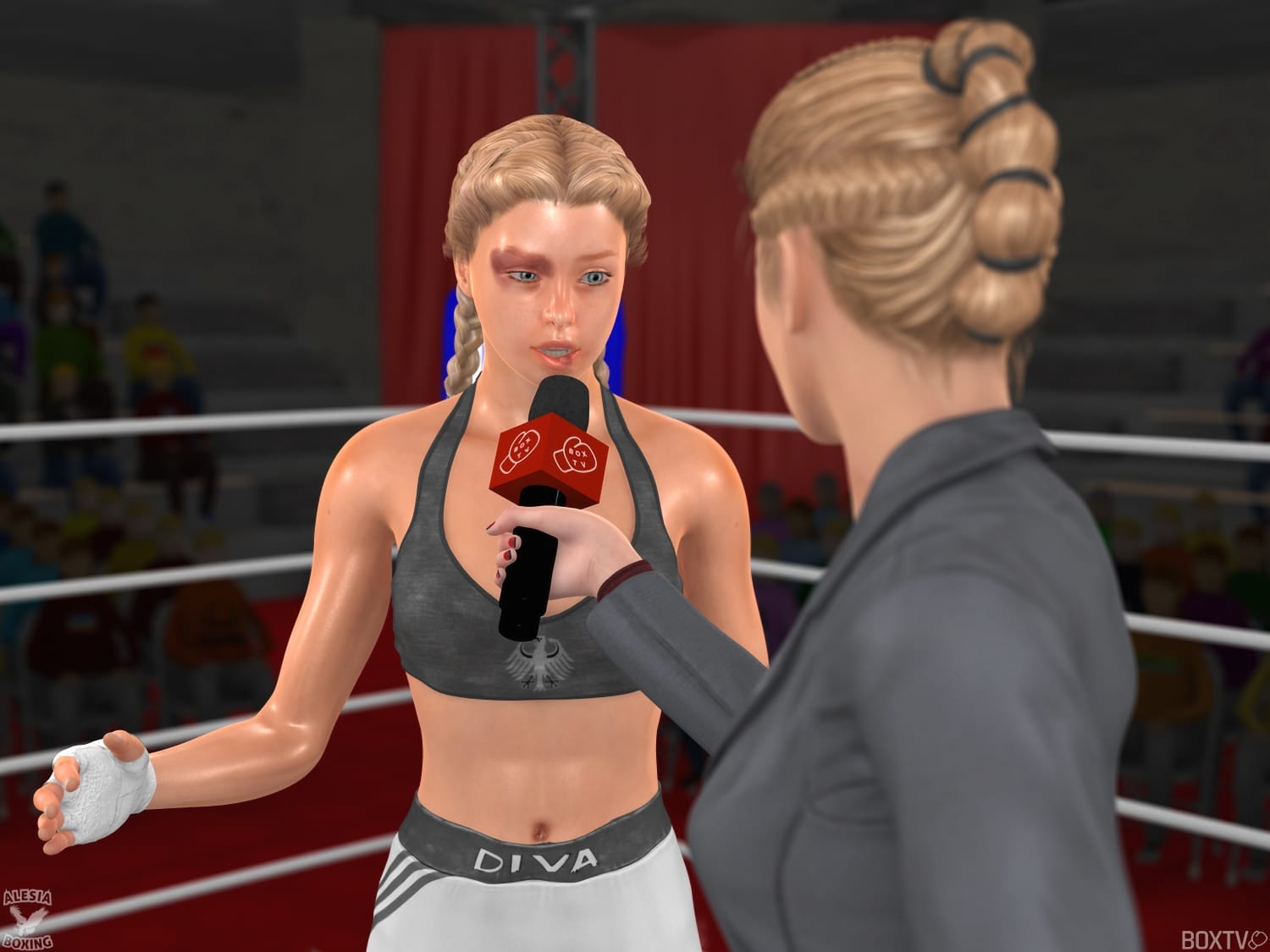 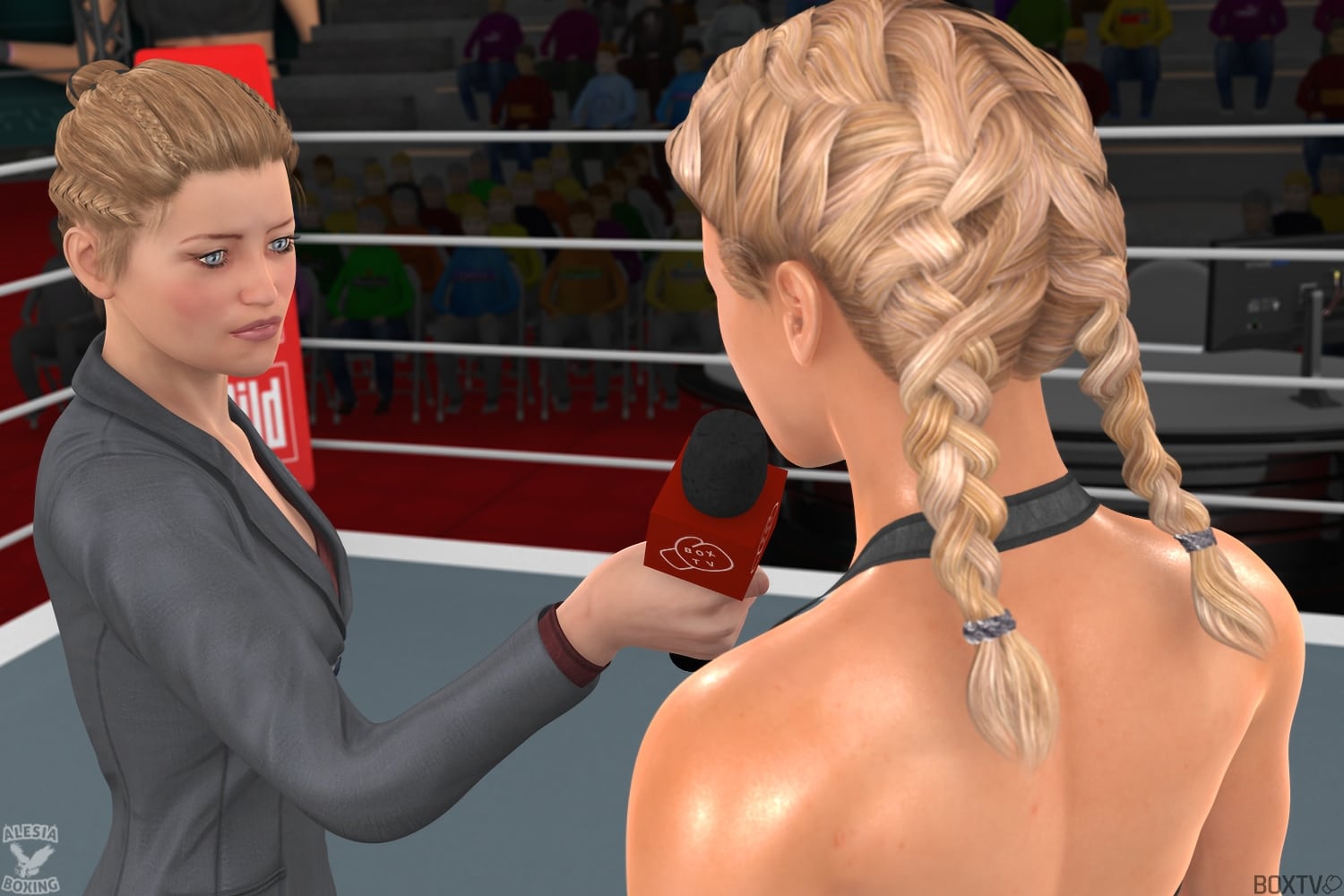 Esther: “Thank you. I now have Virani up for a few questions. The first one: why did you take on this fight? Many observers predicted this result ahead of time.”

Virani: “I knew the risks, thank you very much, and I believe I gave a good account of myself here!”

She gets applause for that one.

Virani: “Honestly. How many fighters took Alesia to Round 8? How many dominated her for three straight rounds? How many of them were Featherweights? That’s a demonstration of my boxing ability.”

Esther: “You also enjoyed the early phase so much that you flexed on top of her.”

Virani: “Do you think you can beat someone like that by being deferential and asking her to kindly fall for you? I don’t think so.”

Esther: “What was your plan?”

Virani: “I knew that I needed to win within 5 or 6 rounds. You have to take the fight to her without giving her a chance to settle. It was effective for a while, but that slippery defense stretched it and I think I lost control right when I needed to crack down on her. I mean, full credit to Alesia, I take nothing away from her. She won, and deserved to win. I hit her with some flush shots and she endured.”

Esther: “What happened between you and your coach? Looks like the relationship was disintegrating between rounds.”

Esther: “The world heard your exchanges on a live international broadcast.”

Stung, the Cobra tries to think in a hurry. She has doubts and so does Emma. What was said in the blue corner is indeed public information.

Thomas thinks: “Wait, what? She could have only thrown a positive line to nip it in the bud.”

Esther: “Do you want a rematch?”

Virani: “No. This was fun, and I take pride in my performance, against one of the best pound for pound fighters. It’s a moral victory.”

Esther: “Can we assume that you still want to face Hee Jung Park?”

Virani: “Obviously. She should stop ducking me now that I proved I’m at world championship level by giving Alesia a good challenge. I mean, let’s be honest, she saw what I did to Alesia. I bet she’ll retire before she gives me a title shot.” 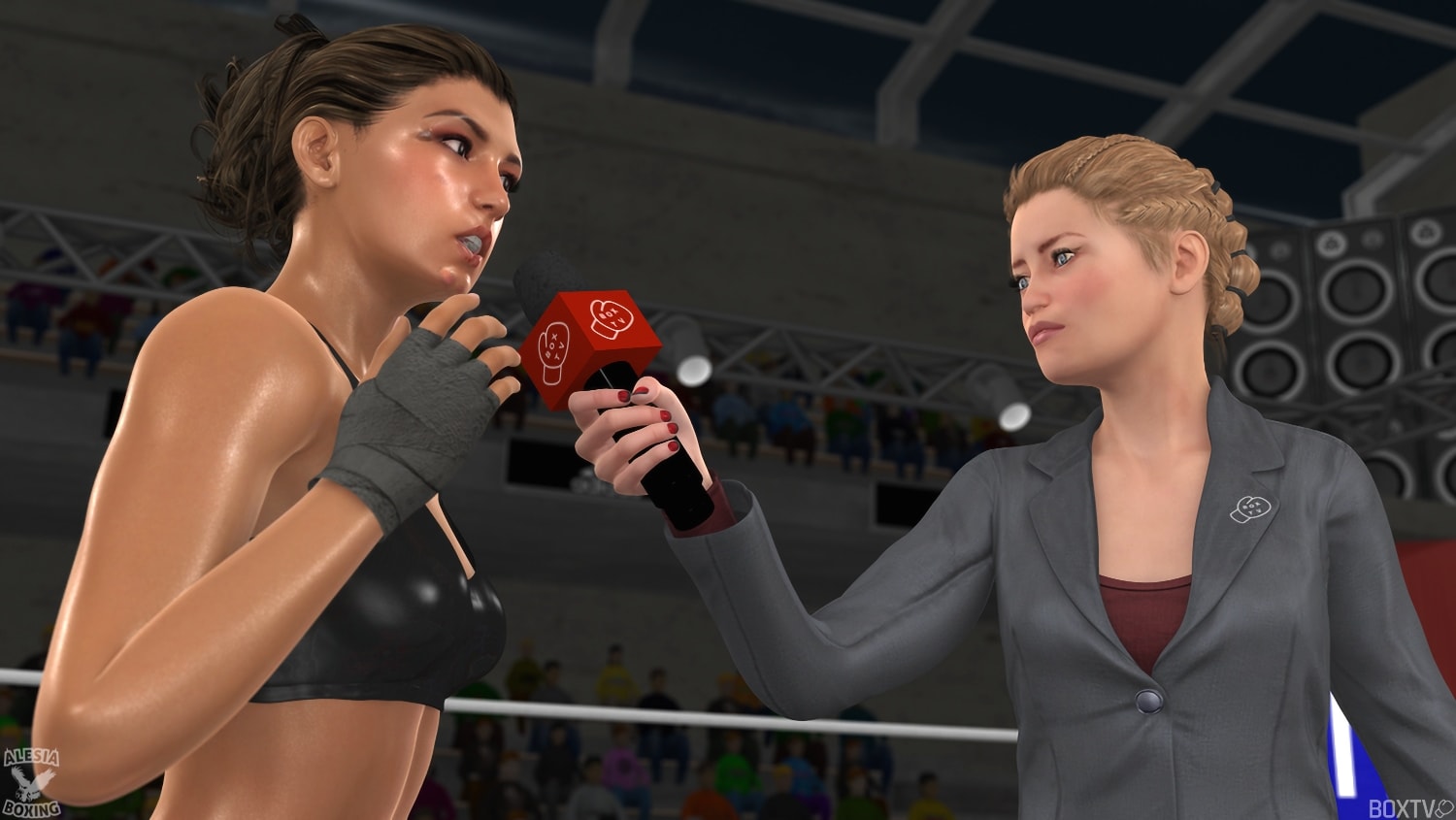 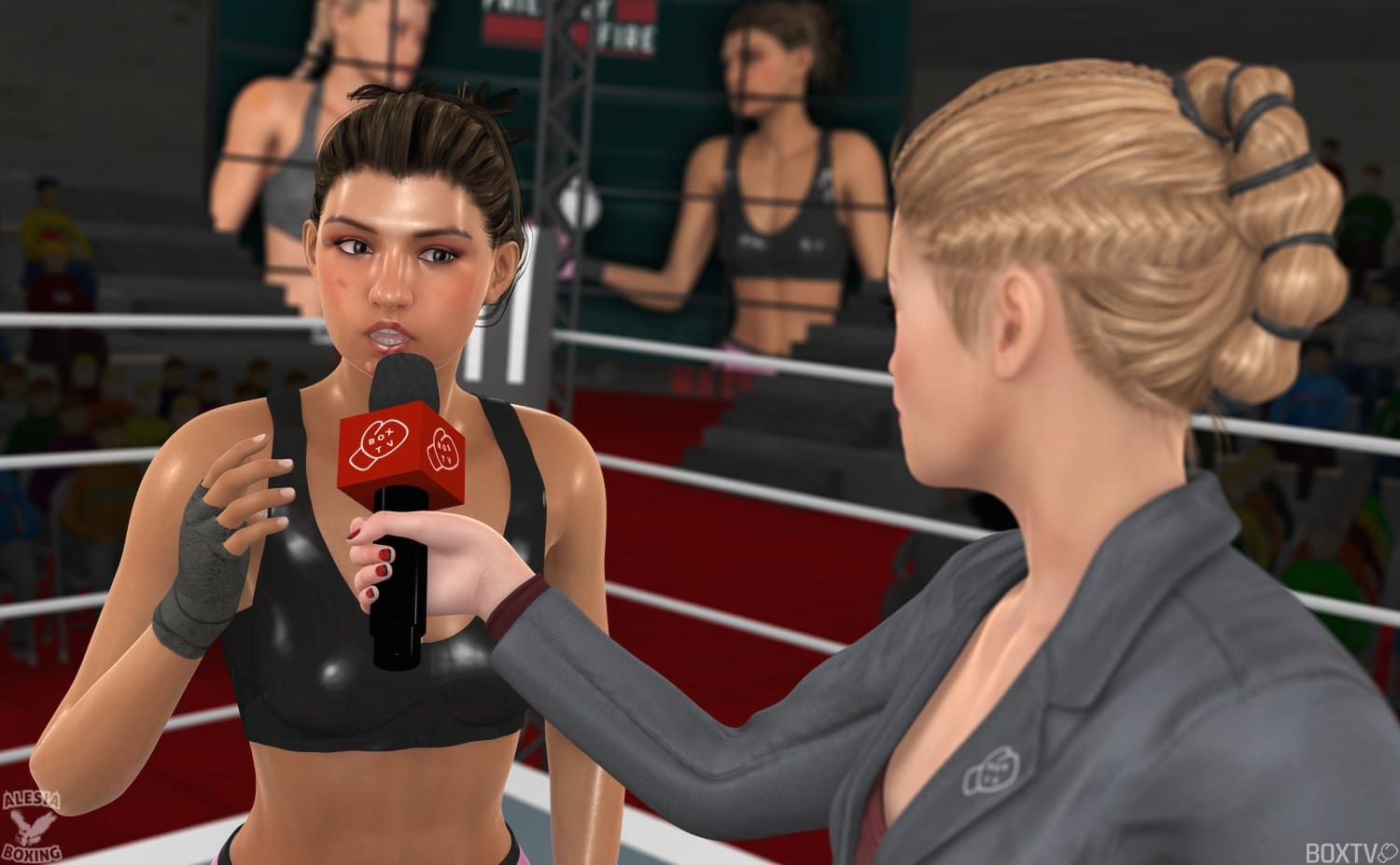 After those verbal fireworks and a shower, the mood is a little more somber in Virani’s dressing room. A loss is a loss. The coach is silent at the beginning, to try and process everything he saw tonight.

Emma: “I’m feeling for you. But you fought well. I think there is some pride to be taken out of that.”

Virani: “Thanks Emma. Tough little stretch for the both of us. But I’m pretty happy with my performance. I didn’t hold anything back and it almost worked.”

Emma: “You really gave it a go. At least you can say that. It would be terrible had you failed to give it a real try. You know?”

This makes the coach pipe up.

Thomas: “The matter here is respect. I didn’t like what I saw, when you taunted and flexed over her after a knockdown.”

Virani: “It all felt great. Punishing her for three rounds, mentally dominating. It’s an addictive sensation when you have a taste of it. I wanted more of that. I only regret doing it to Alesia, because she is my friend. Otherwise, the only sensible thing to do in a sport like this is to use every edge I can get.”

Emma: “I don’t think Alesia cares about it, though. You heard what she told Esther about the mind games. To her, that’s part of boxing.”

Thomas thinks: “Wasn’t this the girl that had to be cajoled into knocking someone out? She’s evolved.” 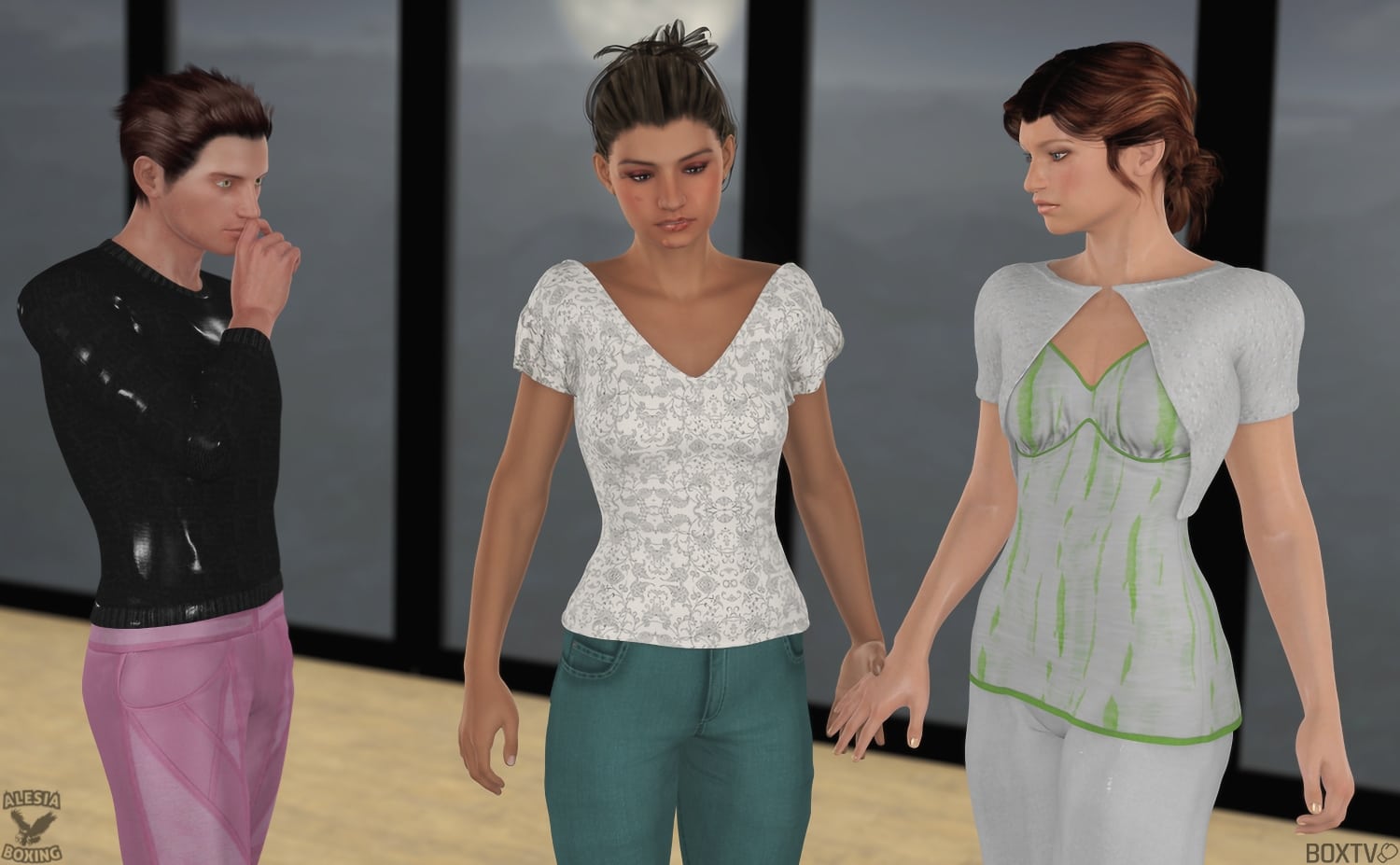 Also freshly showered, Alesia is talking with Akane and Sophie as Regina handles another interview outside.

Sophie: “The satisfaction of winning never gets old, does it?”

Alesia: “Definitely not. Seeing her down for the count, though? That was terrifying. I feel bad about doing that to a friend. It was a brutal finish.”

Akane: “Get real! She wasn’t exactly caressing you with her hands. She wanted to give you a brutal beating and to celebrate a win at your expense. The only gift she had for you was that red eye.”

That draws a laugh from Sophie.

Sophie: “Akane is right. It was either you or her. You can always be nice to her now, but in that ring, you had to take her down.” 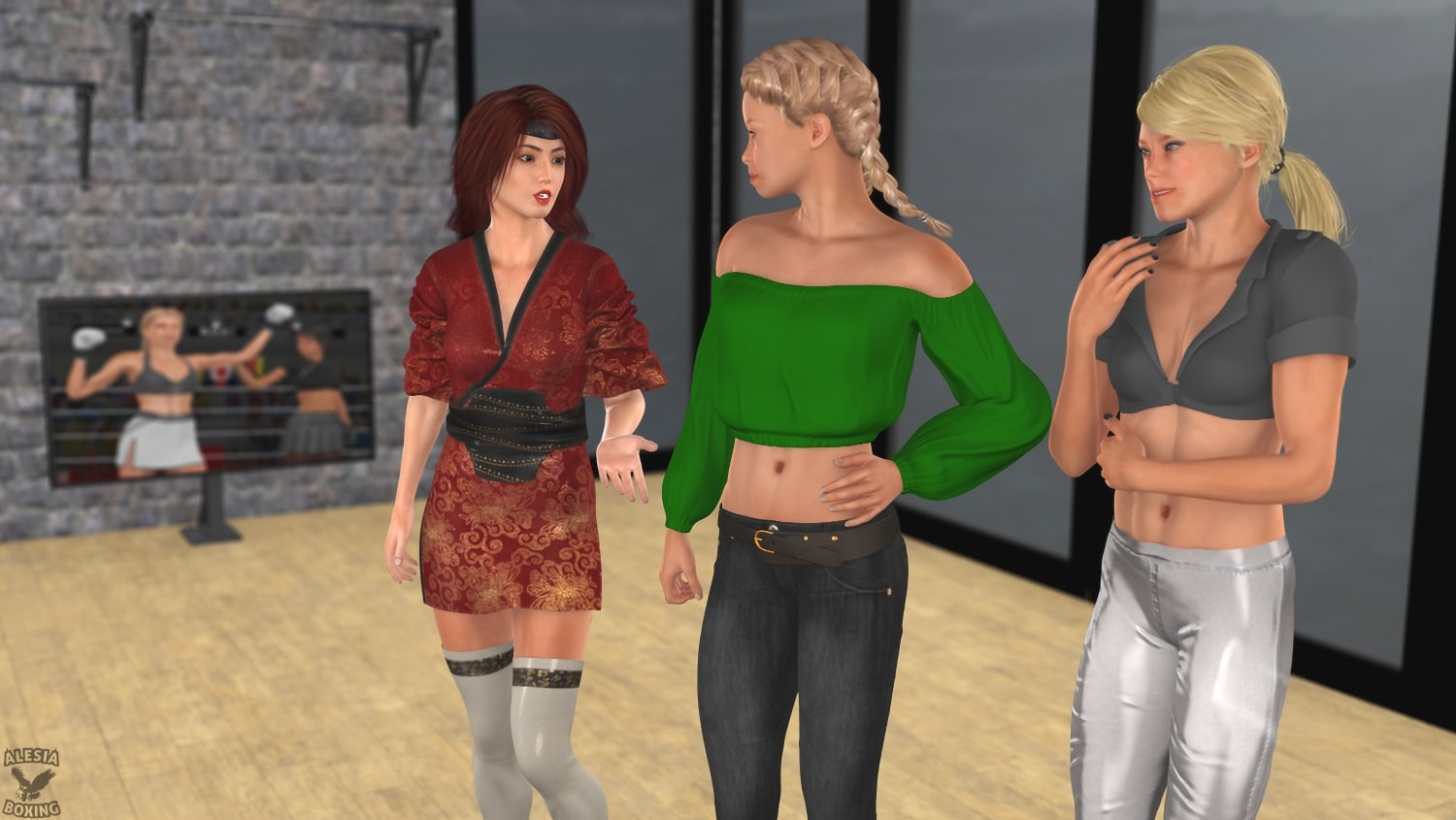 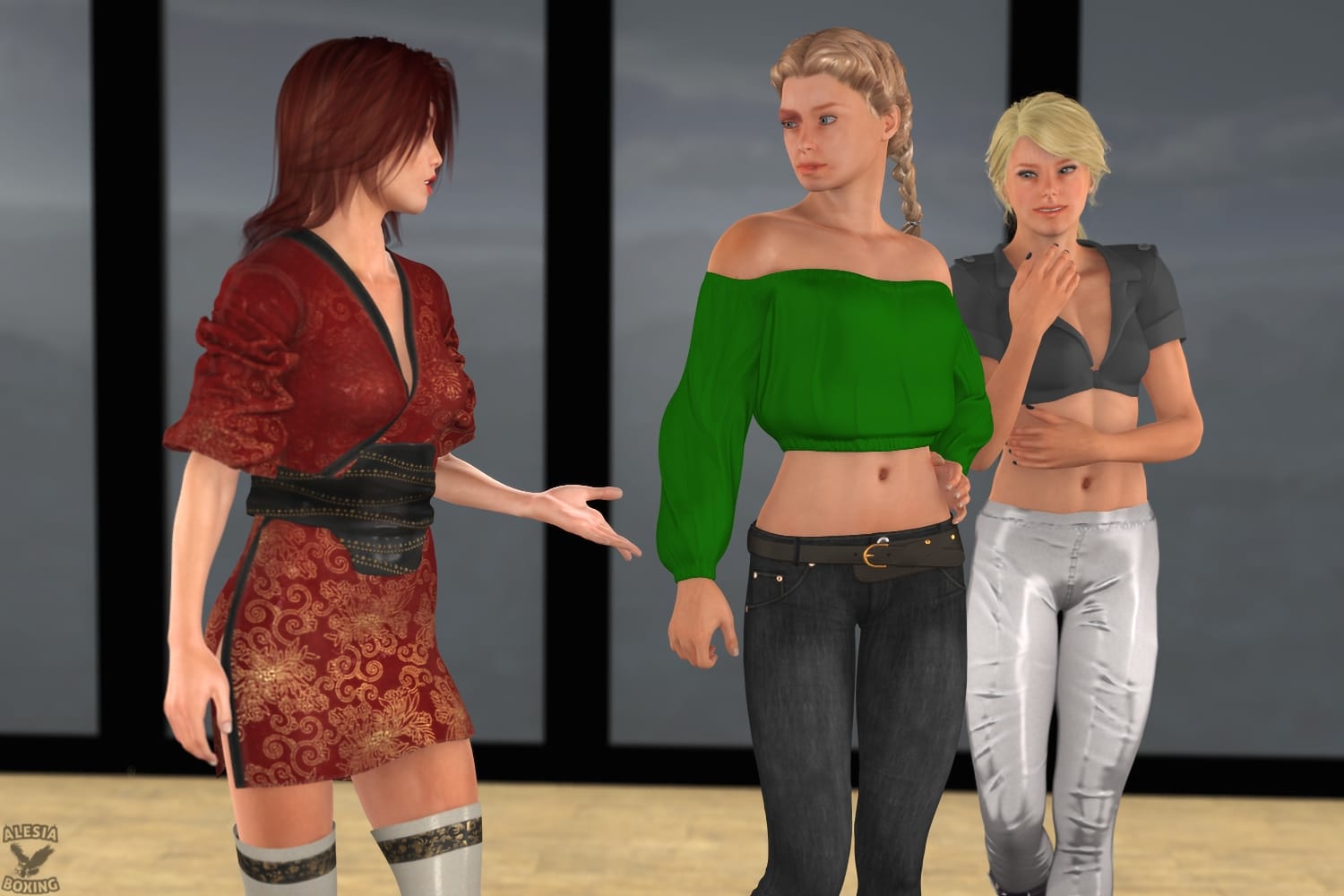 Alesia goes to Virani’s dressing room. She knocks on the door and is let in.

Alesia: “Hey. That was some interview from Esther, huh?”

Alesia: “Glad to hear that. Hey, I have a request. Actually, I’d be insulted if you said no.”

Alesia: “I’d like you to spend the week at my place. Your folks are leaving on Monday morning, right?”

Virani: “They are. I want to stay, but are you sure you want me around?”

Alesia: “Yeah. We never spend much time together. I want to hang out with my friend, not just to see you in the ring for an hour. I need it after this result. Please be my guest.”

Virani: “We both need time together. I’m happy to stay for the week. That will be better than heading straight home alone and thinking about what happened tonight.”

Alesia: “Thank you. Come to my place on Monday.”

Before Ally goes through the door, she faces another question.

Virani: “I saw the knockout on replay finally. Makes me wonder: did you hit me at full force at any point in our sparring sessions?”

Alesia: “I never do that in sparring. I keep it for competition.” 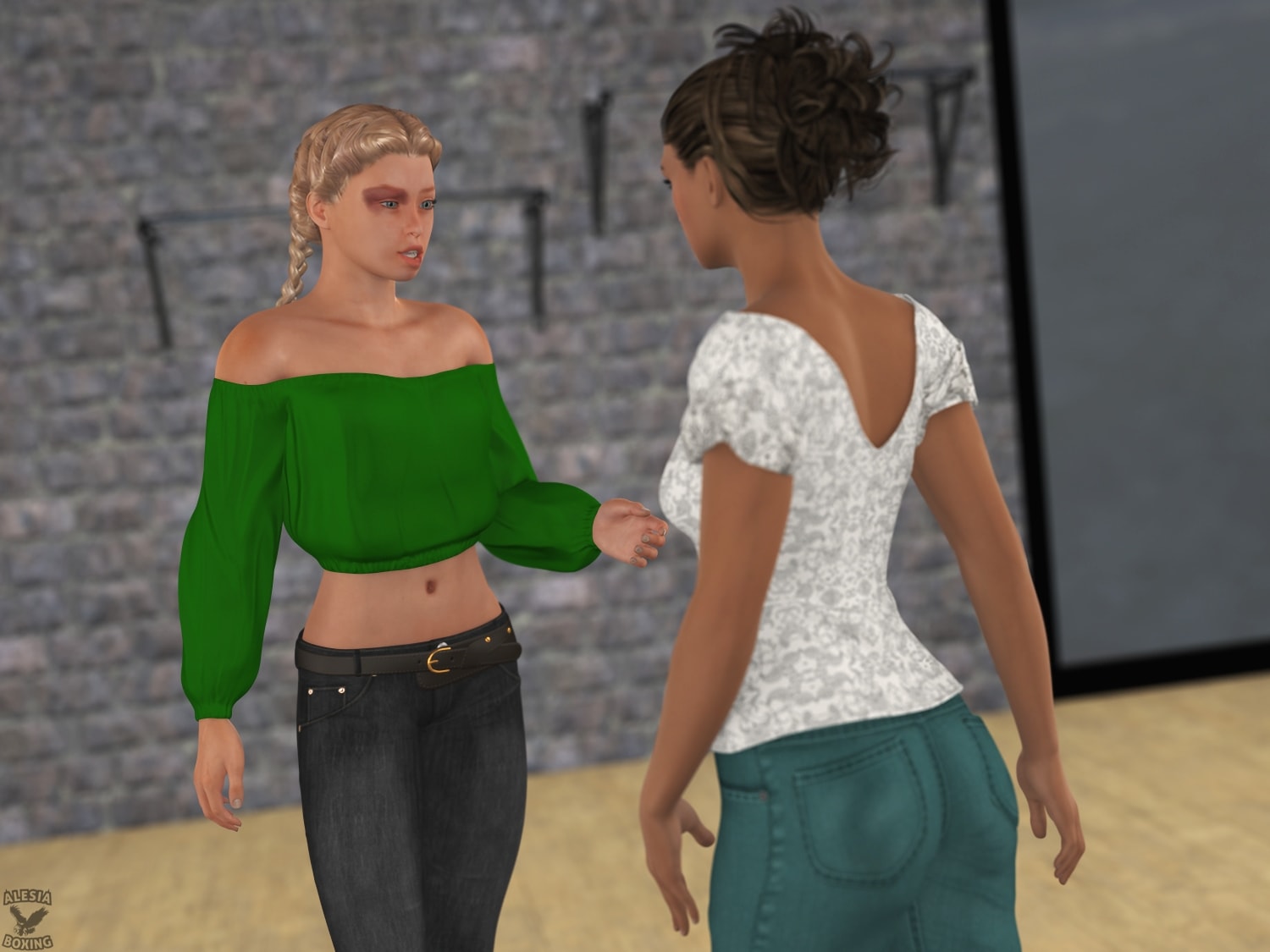 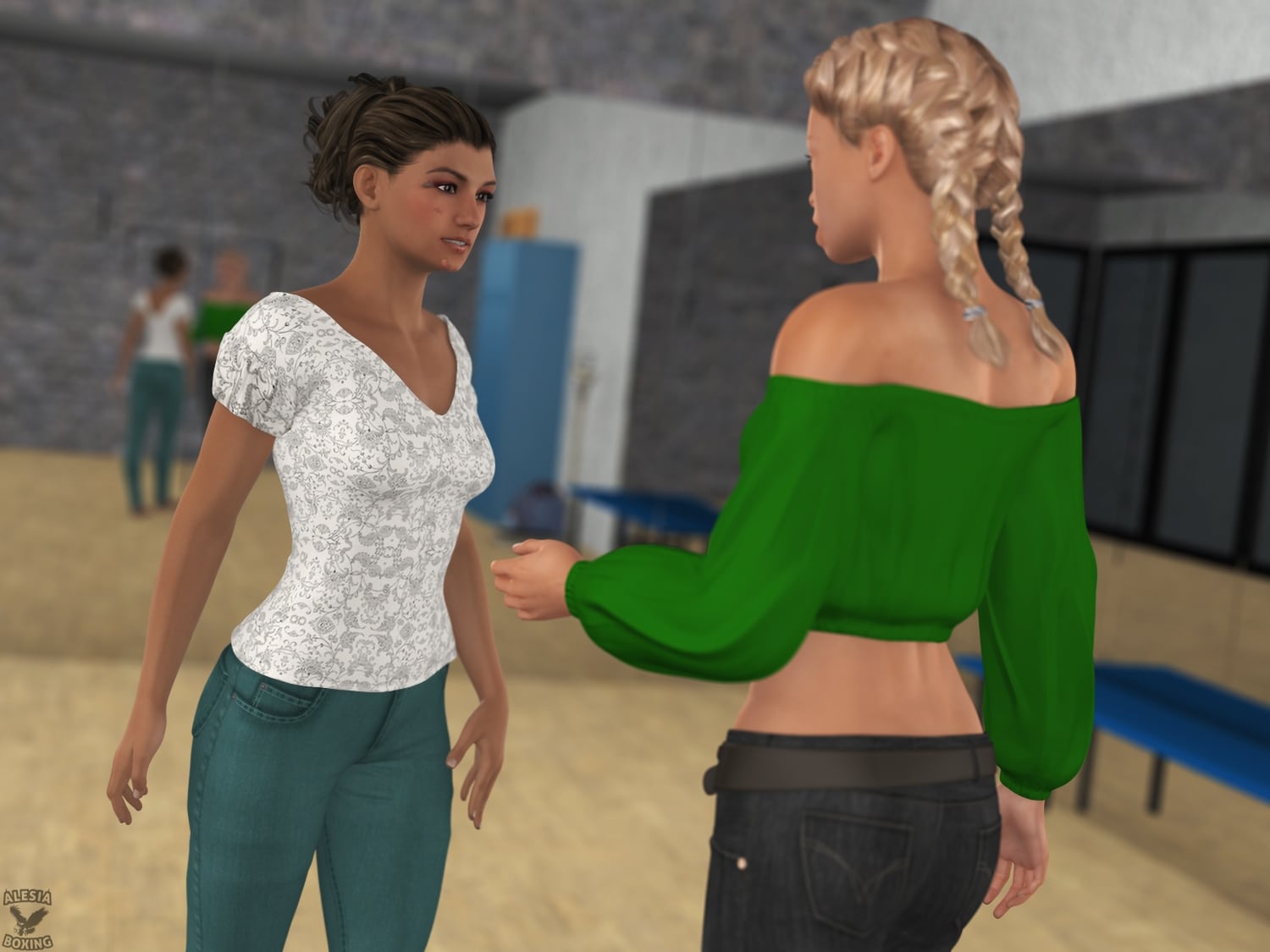 They have a warm hug before parting ways. The two women have a few things to sort out, and they’ll have the time for it. Oh and there’s the idea of enjoying each other’s company without throwing and receiving punches.

The reigning Super Lightweight champion of the world, former German champion and one of the pound for pound best. The Diva is known for her tactical strength and durability.

Current number one contender in the Featherweight division, by Alex. Click on her fighter card for her full profile and fight history.