We are live in Seoul, South Korea, in the main event.

A first defence of The Empress’ IBF Featherweight title in her hometown. The visiting challenger, Wendy Pozler, doesn’t seem awed by the occasion and she has a clear height advantage over the defending champion.  The experience advantage goes to The Empress by a lot.

Kanti: “Ladies, I went over the rules with you in your dressing room. This is a ten round fight. I want you to follow my instructions at all times. Protect yourself at all times. Please remember you cannot be saved by the bell in any round. If you score a knockdown, I will not start the count until you are in a neutral corner. No exceptions. Remember, this is a title fight so I expect you to be on your best behavior. Do you have any questions? No? Touch gloves and go back to your corners.”

Laila Ali: “There didn’t appear to be words exchanged between the two fighters, but there were some steely gazes being exchanged there in front of an expectant home crowd. Let’s see what these two have to offer us.” 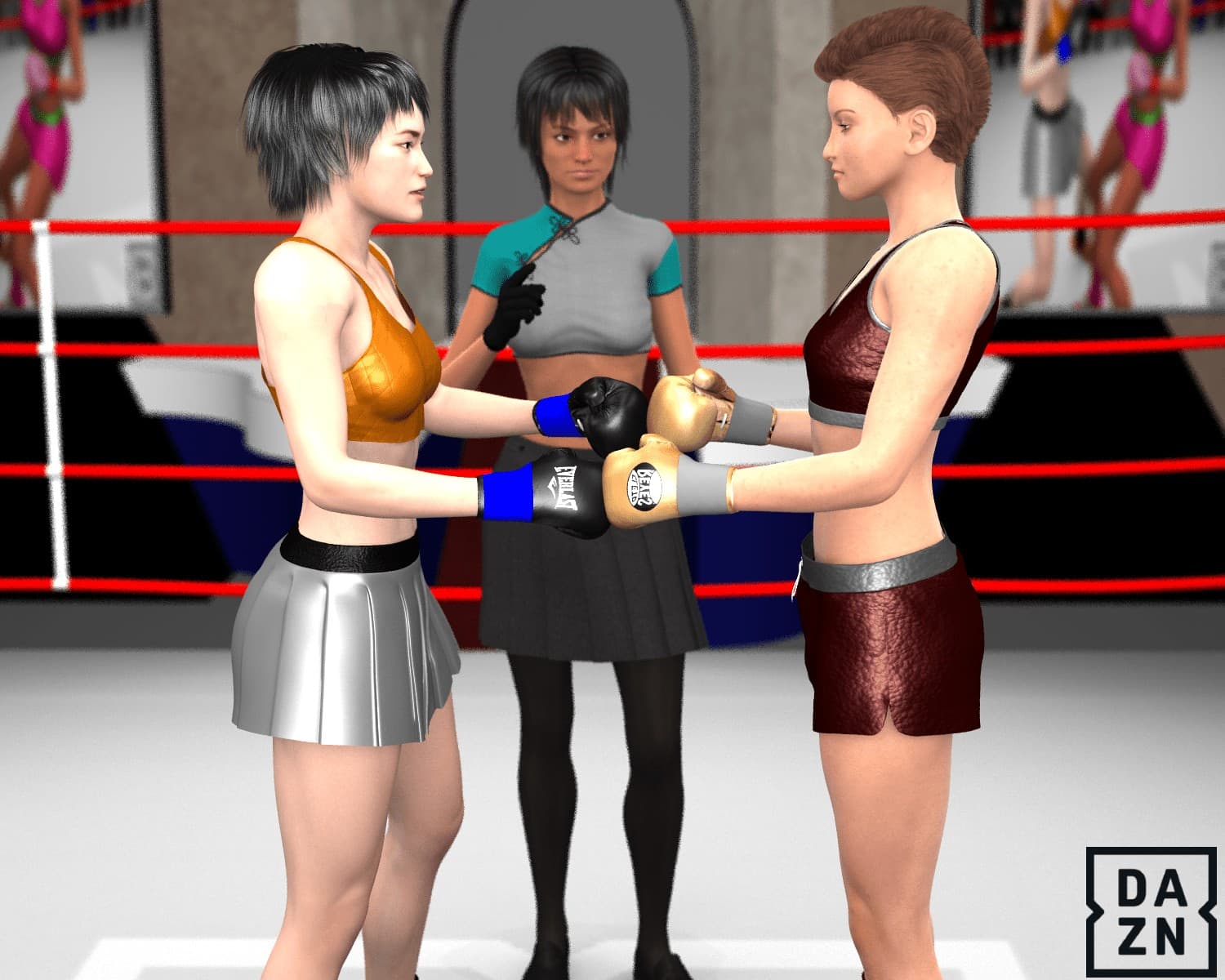 As you might expect, given the height disparity between the two fighters – the taller fighter, Wendy, wants to work the jab, and the shorter fighter, Hee Jung Park, wants to get inside of the jab. The experienced champion works the angles and makes the Czech fighter miss, not allowing her to establish the jab.

Then she starts her plan – breaking down the taller fighter. After a missed left hook, Hee Jung stabs out with a strong left jab to the body. Even early in the fight, the impact produces an audible grunt from the ‘away’ fighter.

Laila: “Watching ‘The Empress’ box is an experience. She has all the skills and all the experience that you gain by training in the sweet science for years. That sort of jab to the body is a great punch – and she does it with good movement – even if Wendy wanted to hit her back, she almost certainly wouldn’t be able to. The Empress engages on her terms only.” 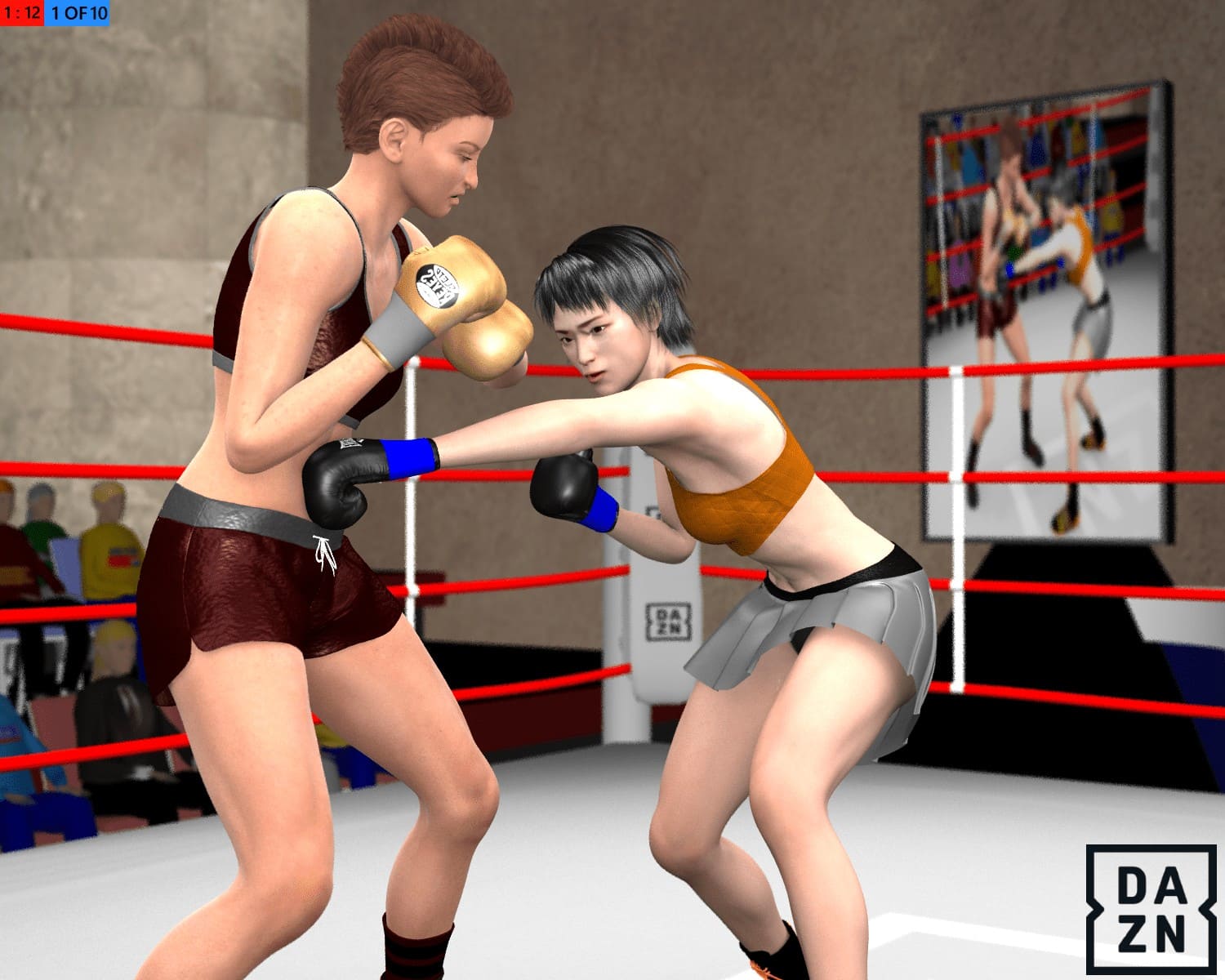 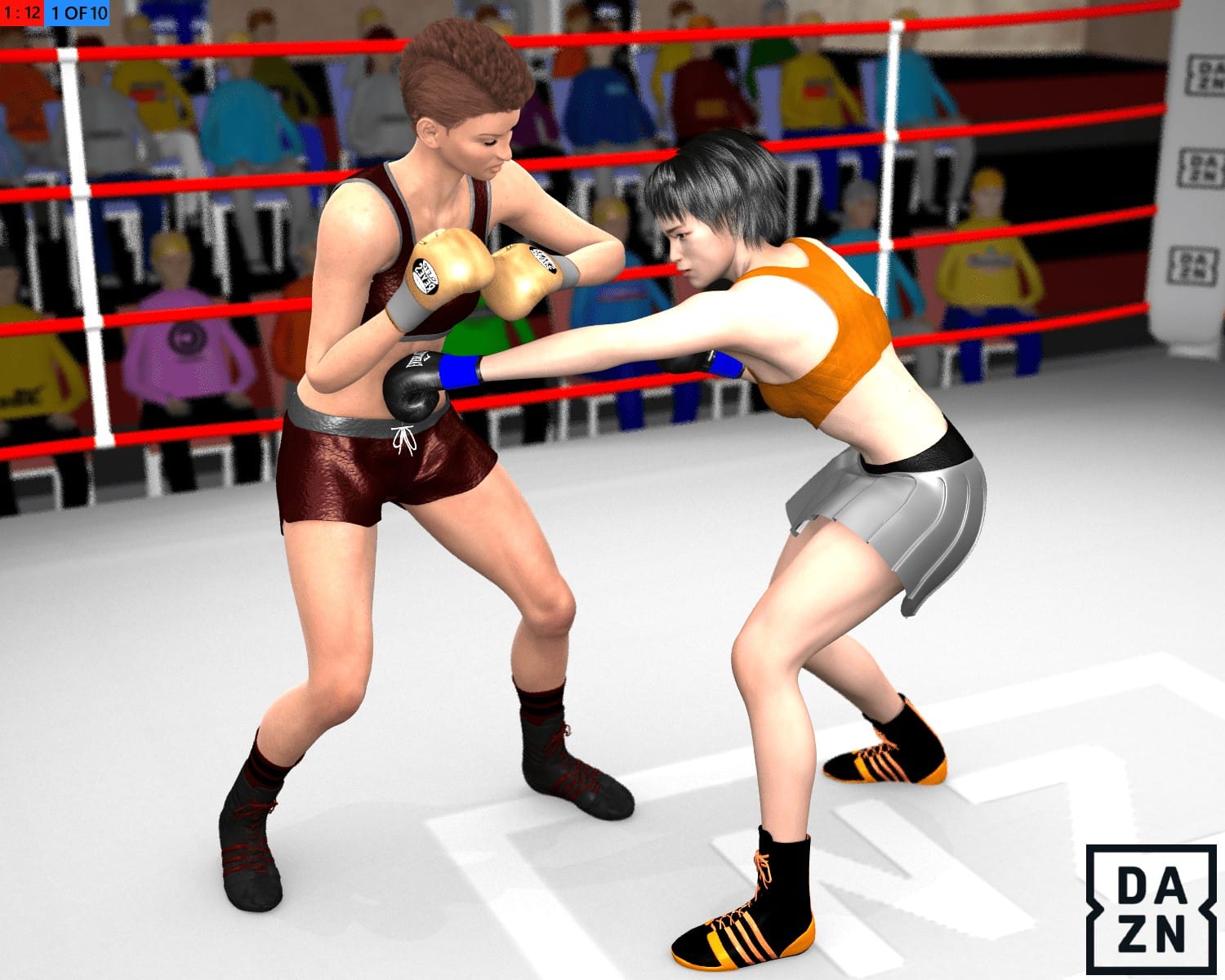 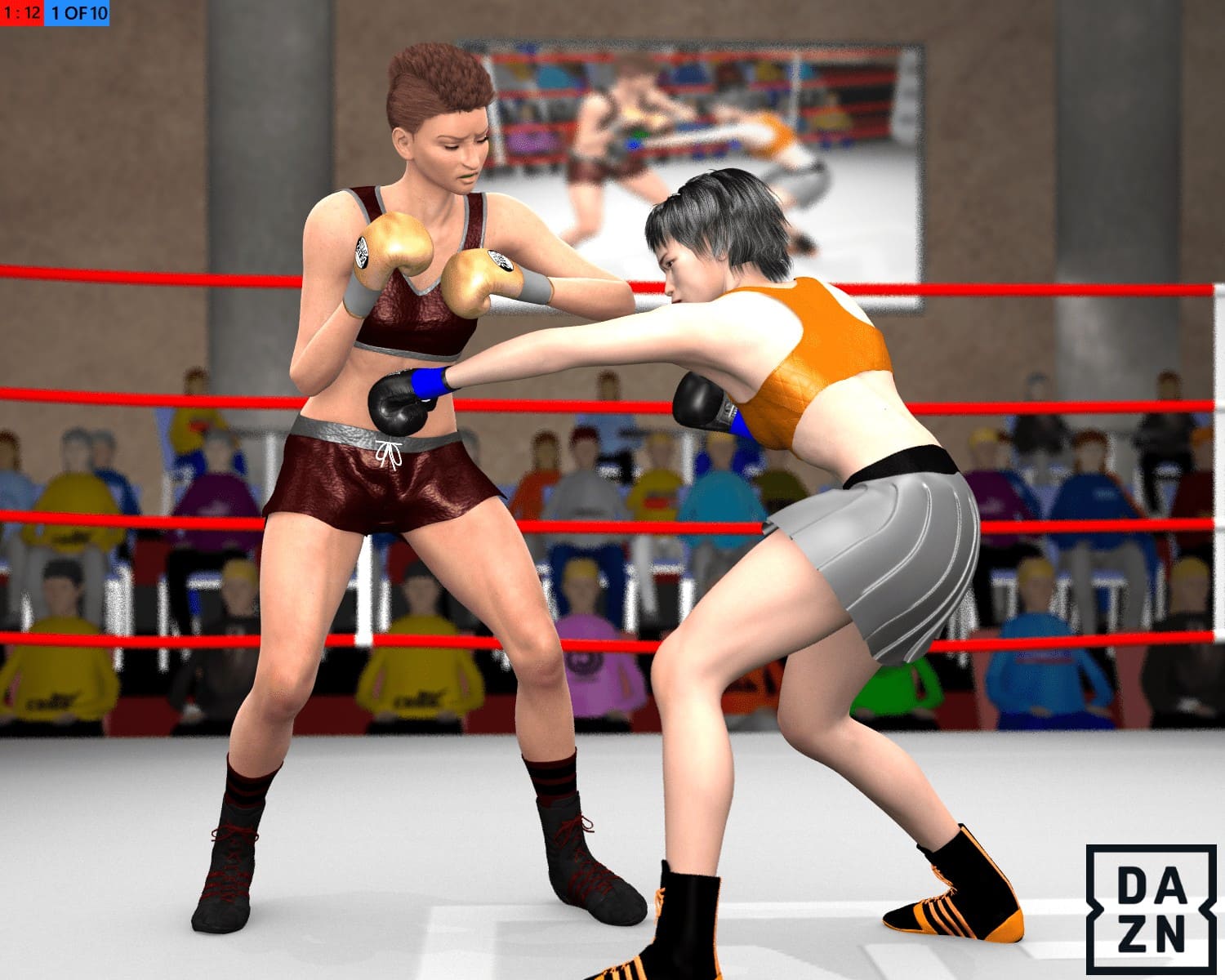 The Empress carries the first round fairly comfortably.

In the second, Wendy knows that she cannot fall behind on the scorecards – given that she is fighting the champion in her hometown, she needs to get a move on. She doesn’t necessarily need to win by knockout, but she needs to win a round decisively, for her confidence if anything.

Wendy sits back a bit more, noticing that The Empress has put a focus on going to the body. The Czech plays the patient game, and is effective on the counter – her best punch of the round is a right hand at full extension that catches the Empress as she tried to throw the jab to the body that was so effective in the first round.

Laila: “Wendy Pozler demonstrates that she is not overwhelmed by the moment, and she has made a quick adjustment to even up the rounds here. The underdog is showing a little bit of bite here in Seoul.” 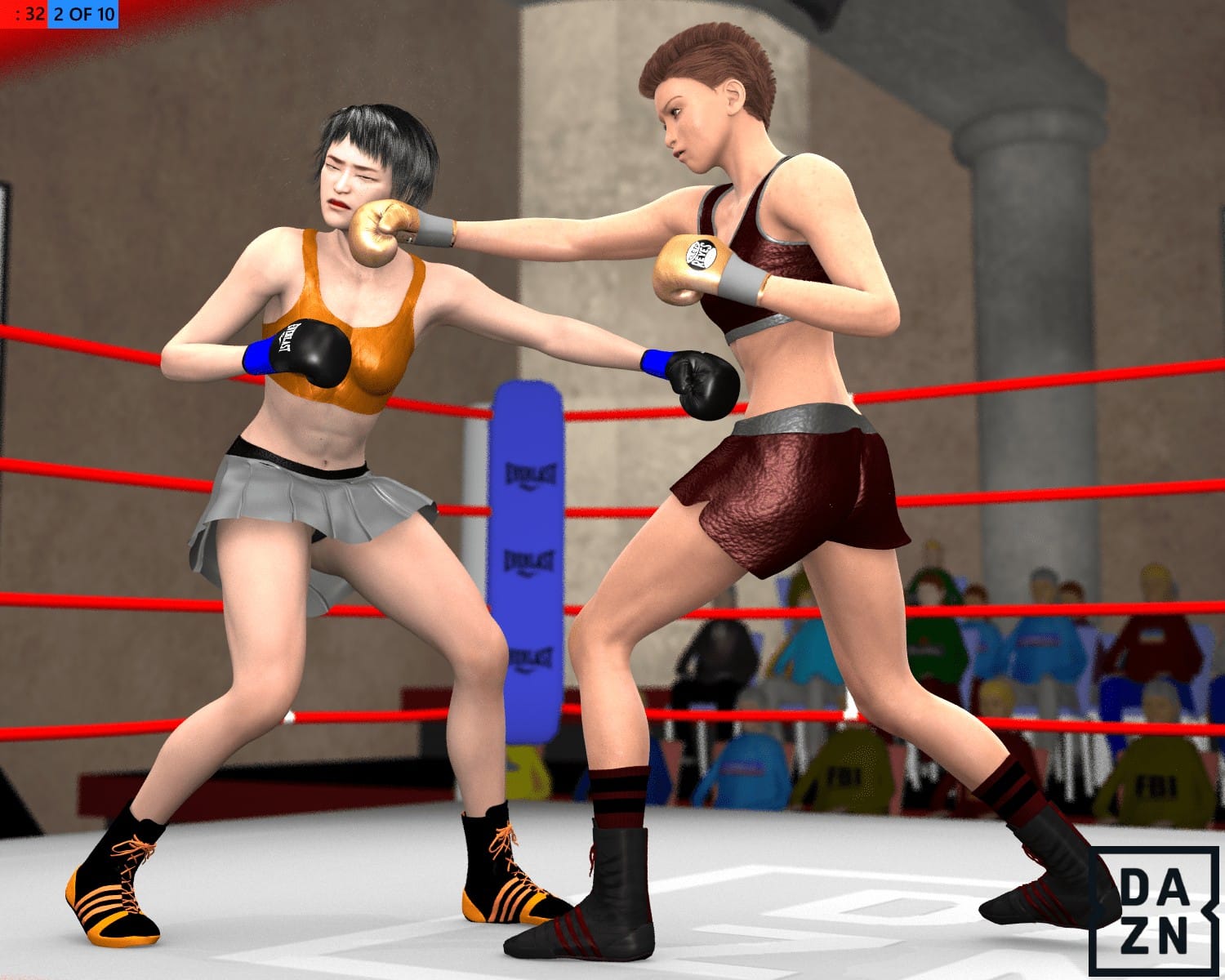 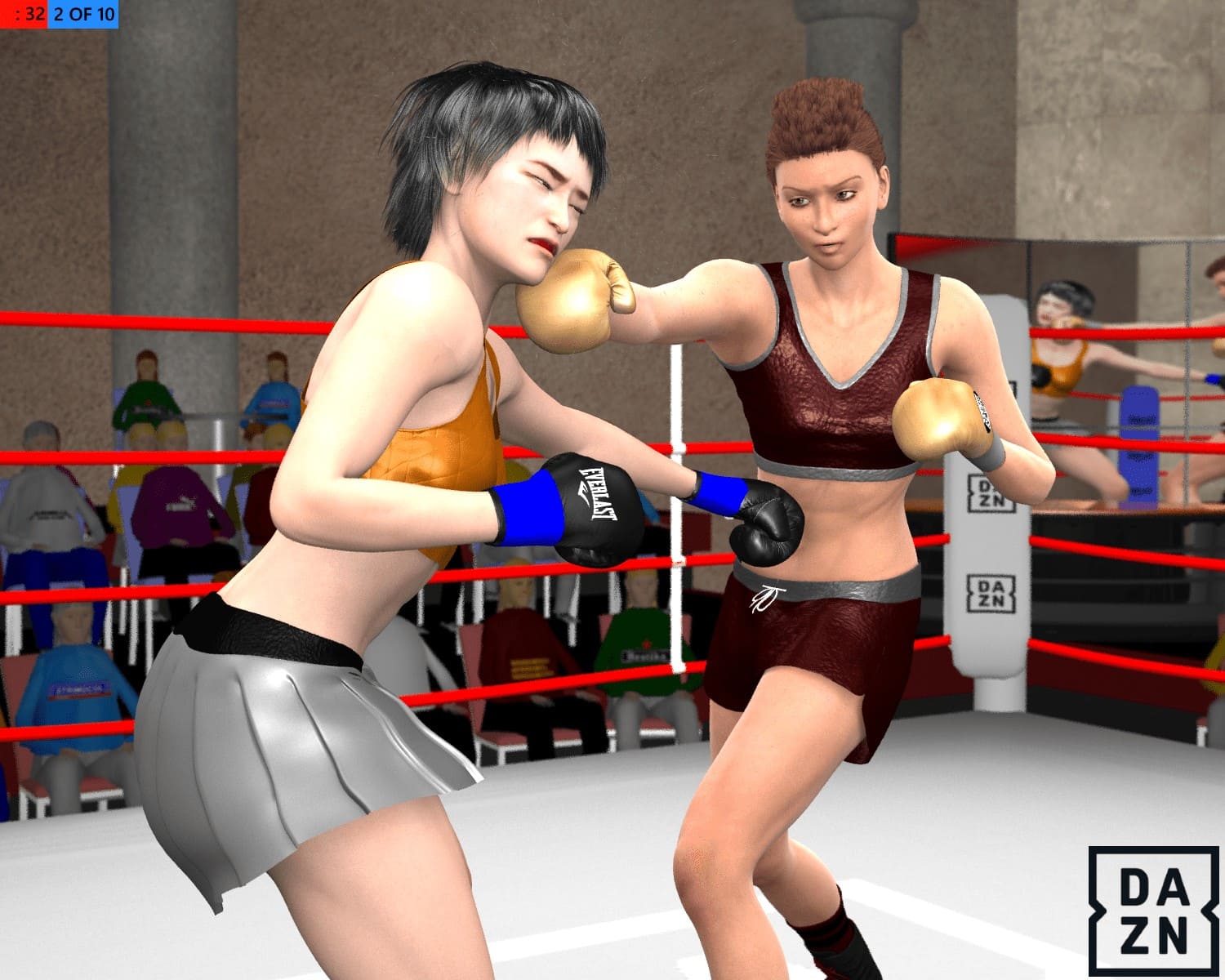 A show of skill

The good vibes don’t last long for ‘Storm Surge’ in this one. The Empress seems to almost take it as an affront that she could lose a round in front of her home fans. Wendy tries to bait more counters, but The Empress is wise to that, being effective by being first.

The Empress really turns the style on in this round, showing the speed that she had at the lower weight classes. Pozler seems a bit overwhelmed by the pure display of boxing skill. Nothing lands with knockout power, but the black leather is adding up already.

Laila: “The Empress is showing that this ring in Seoul is her ring. Pozler is game, but she hasn’t been in the ring with someone like Hee Jung Park and it is showing a bit.” 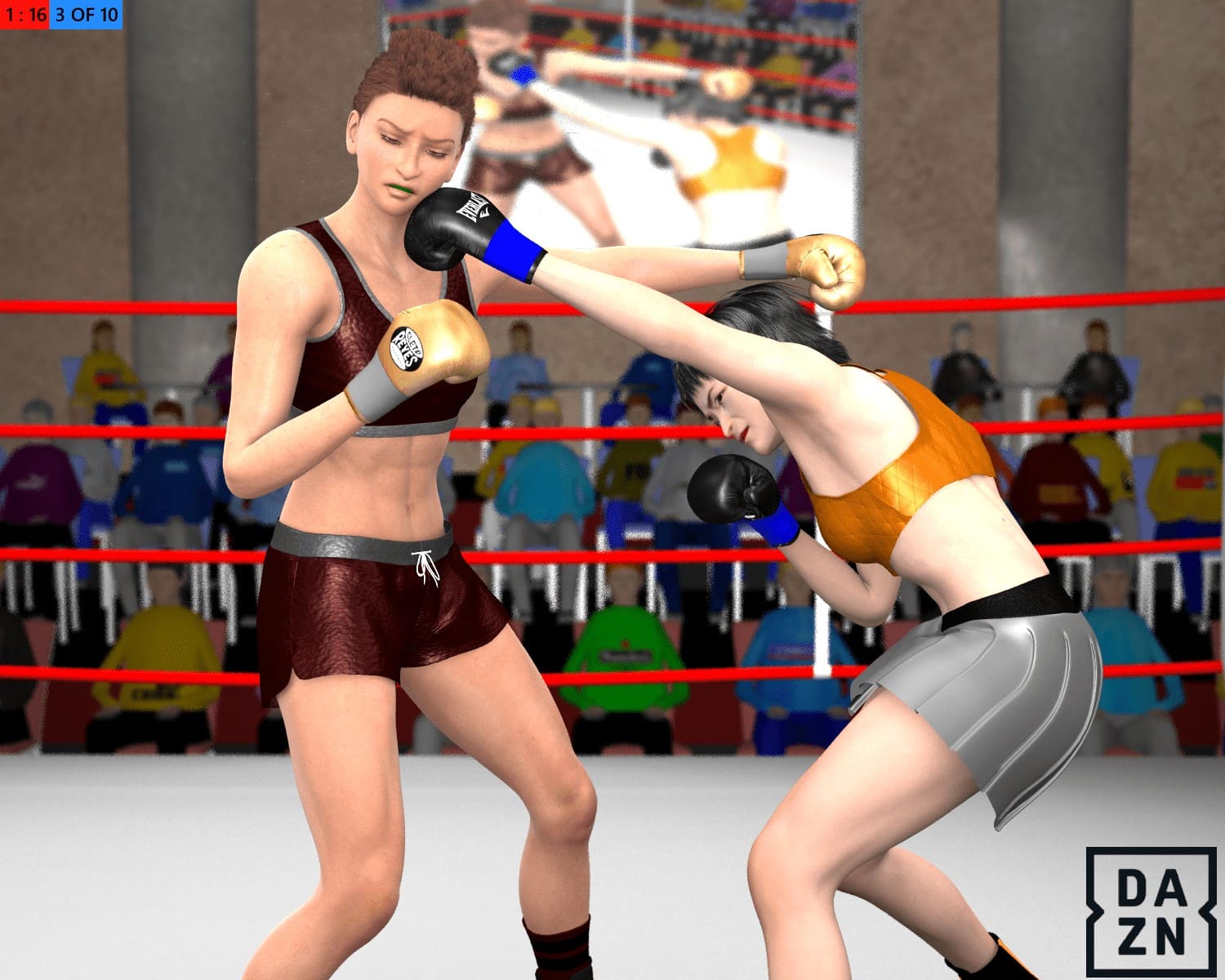 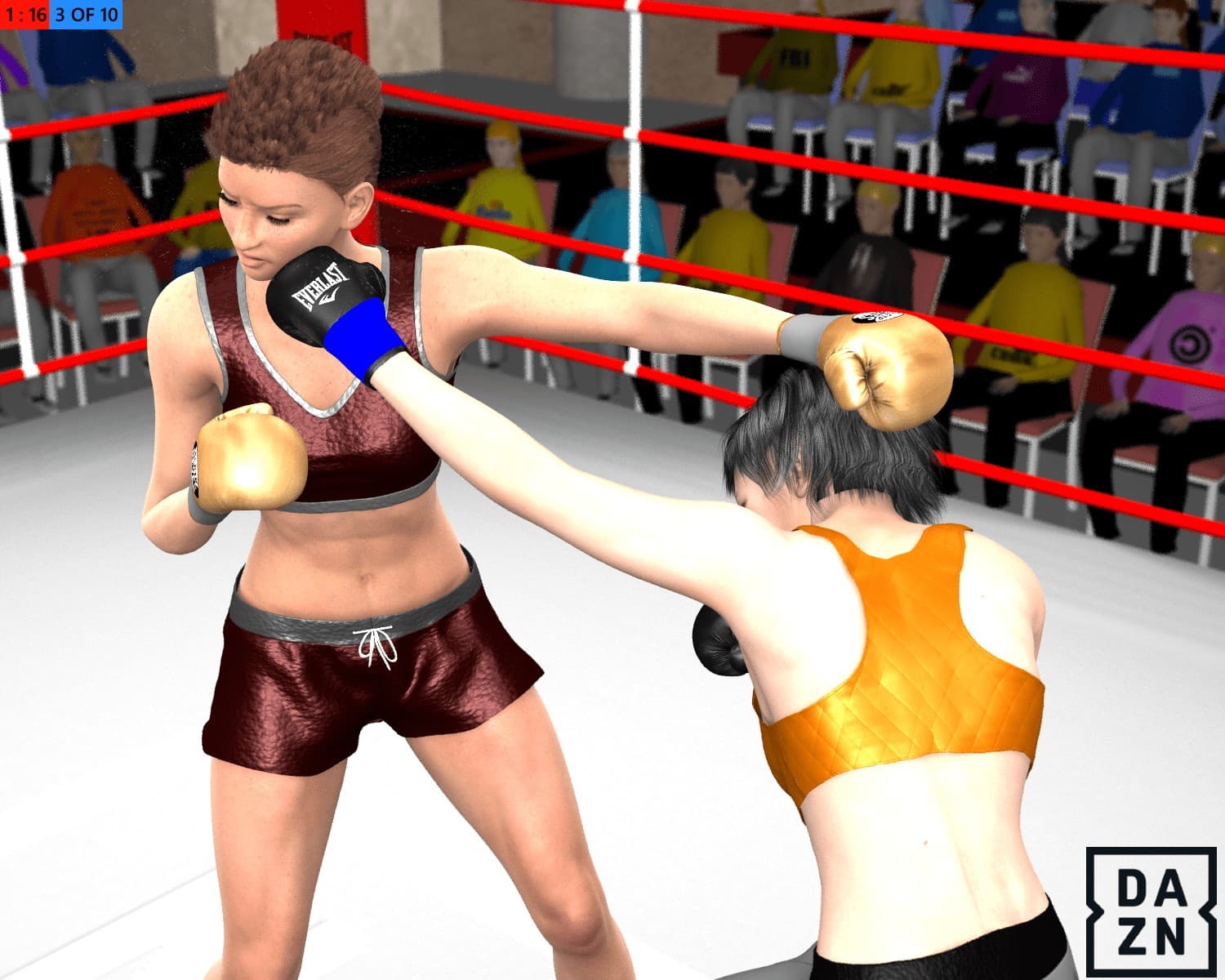 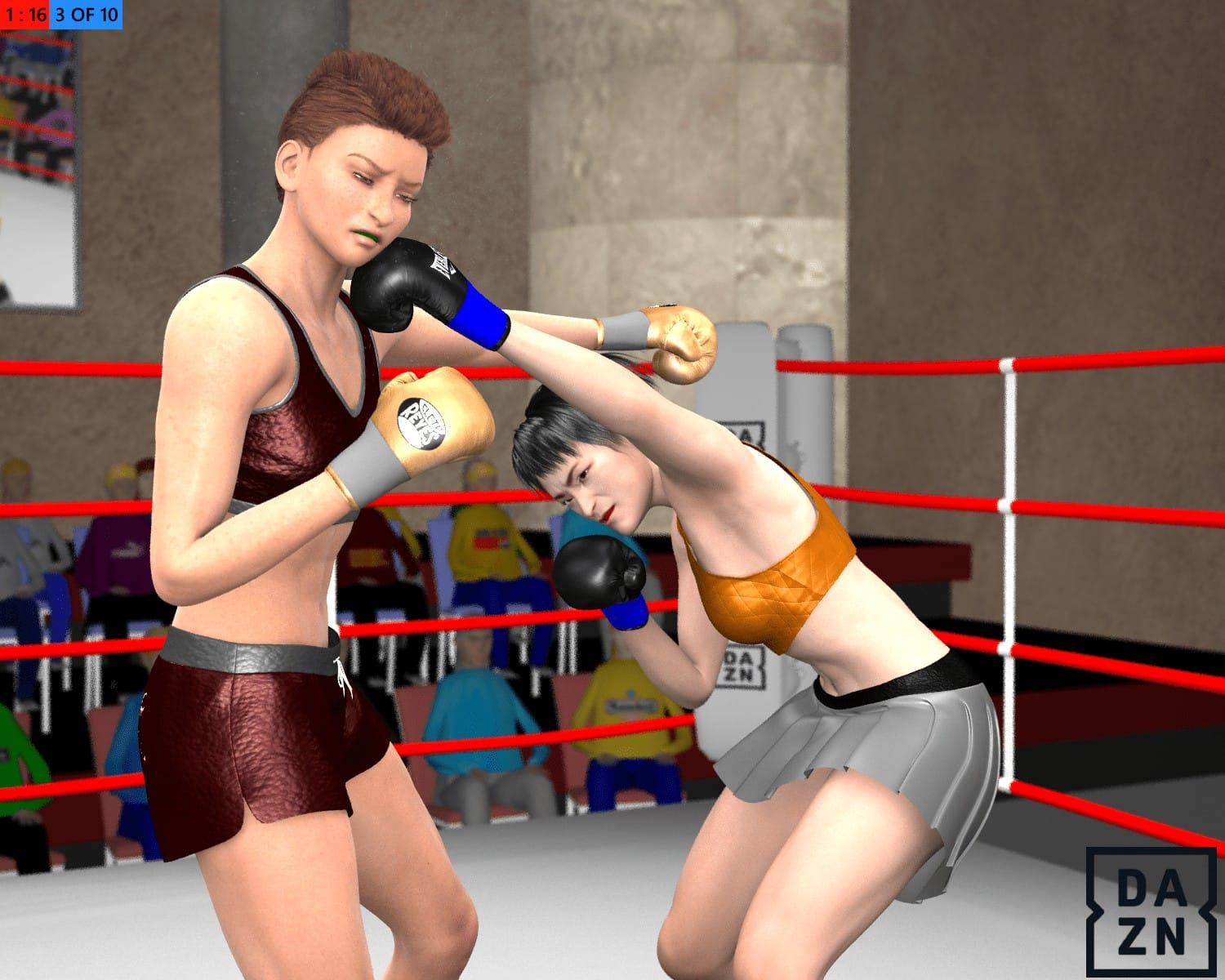 Realizing that she’s at risk of losing the round, Wendy tries to steal it late by throwing a flurry of punches, but the Empress avoids most of them, showing off some impressive defence. Sure they aren’t the fastest or hardest punches, but the defence on display is spectacular.

Laila: “Hee Jung Park is making Wendy Pozler, a fighter with 17 pro wins, look like a rank amateur. Some people said that Hee Jung Park was past her prime. But at 40 years old, The Empress seems as good as ever. Long may she rule. Unless you are Wendy Pozler. Then you want to depose her.” 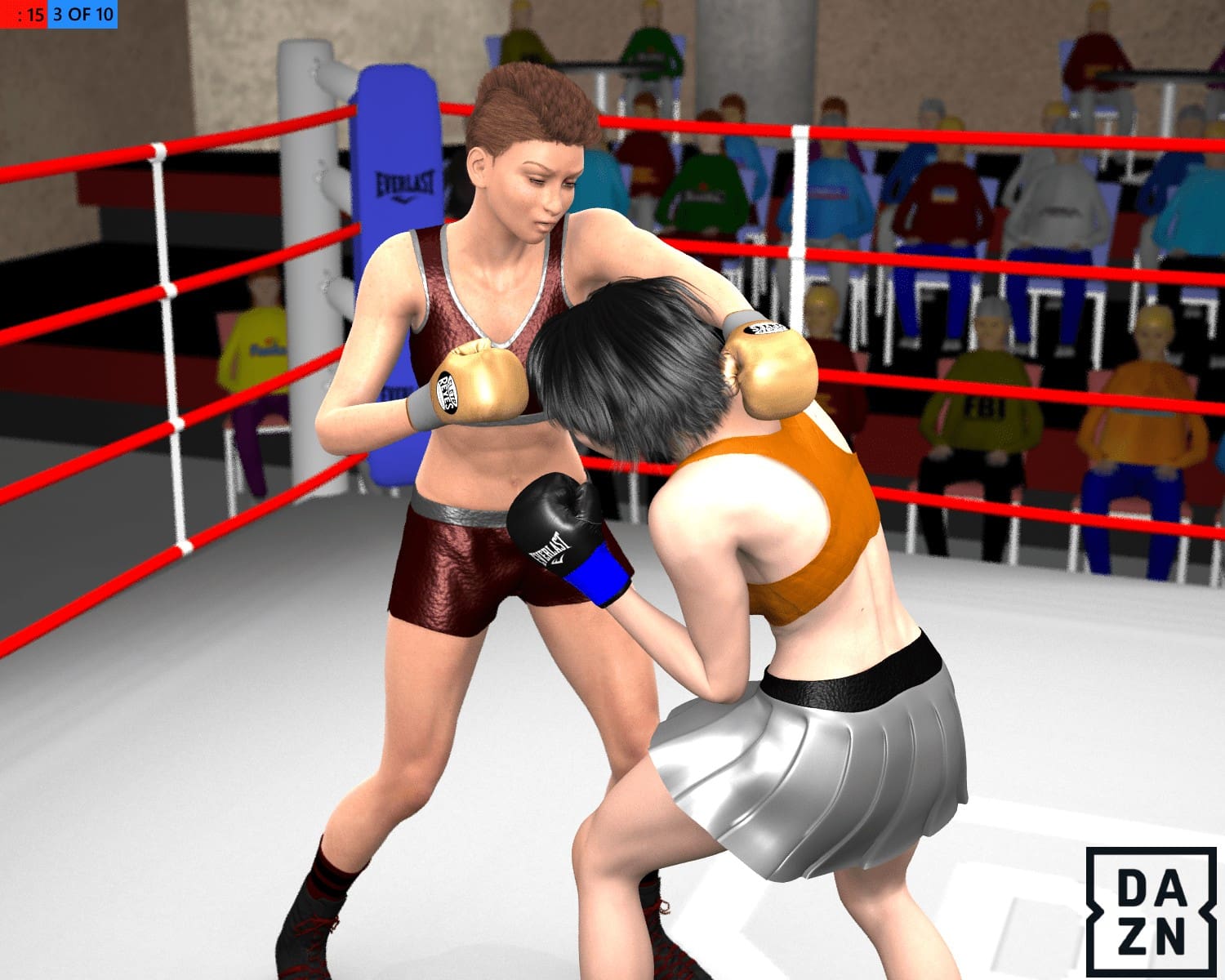 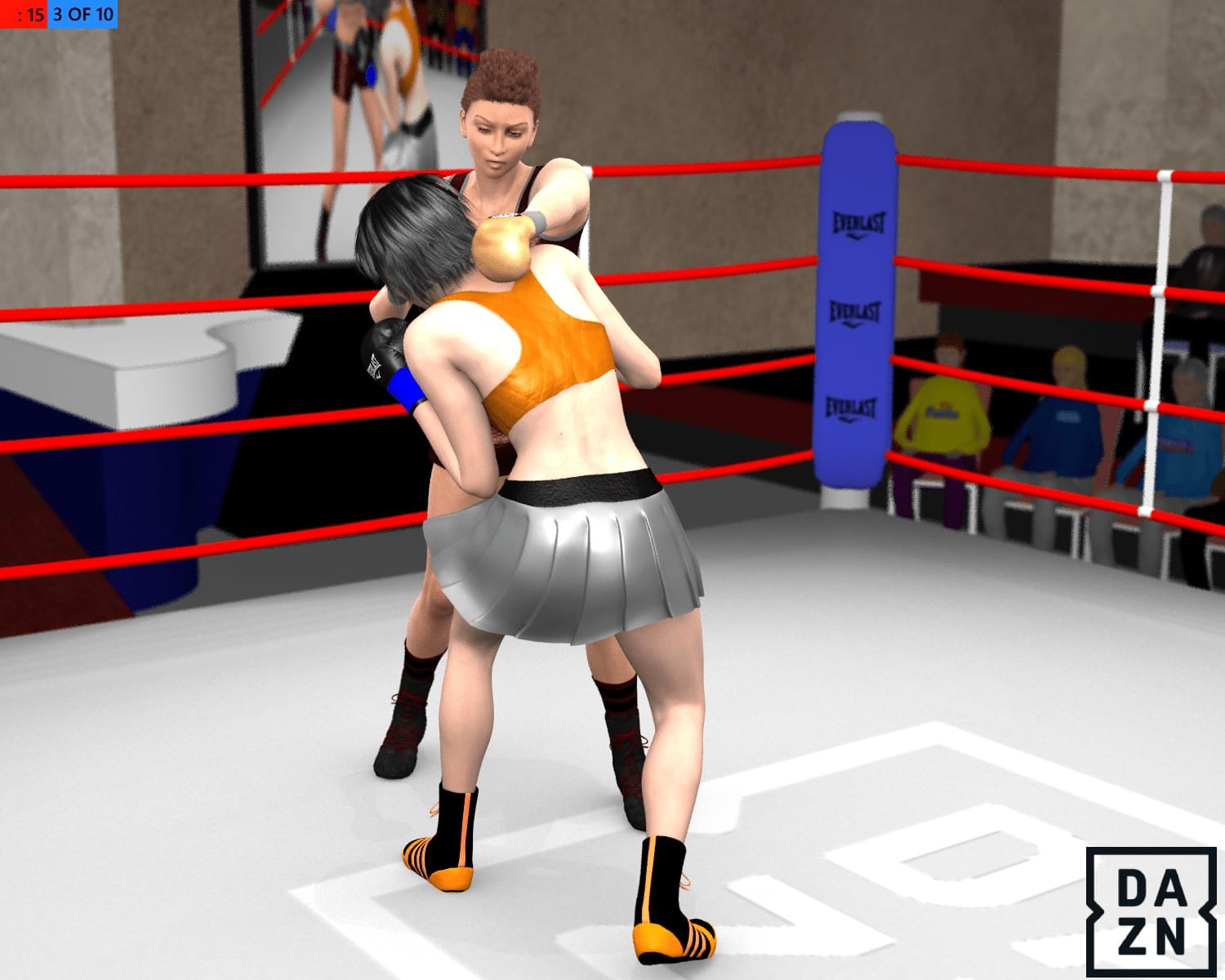 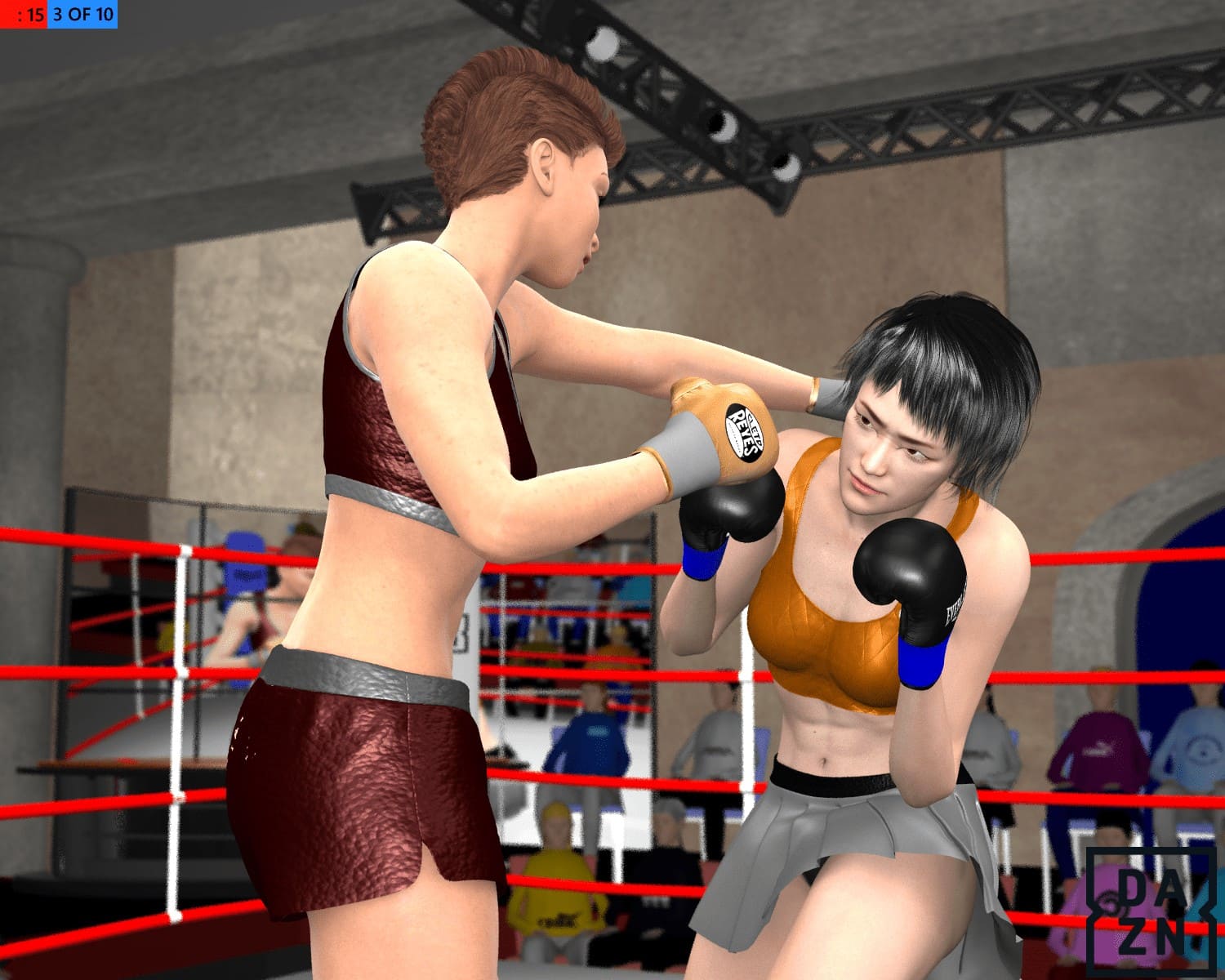 After a thoroughly deflating 3rd round for Wendy, the only remaining question seems to be if Hee Jung will go for the stoppage, or if she’ll be content to ride to an easy decision victory. After a pedestrian fourth round, Hee Jung gets the instruction – step up the tempo and give the fans something to cheer for.

Of course, because she is the Empress, she doesn’t force the issue, but everything she throws this round she throws with a bit more snap to it, with a bit more viciousness. Wendy’s head starts snapping when right hands land. The message is clear – ‘I’m here to knock you out, can you stop me?’

With 16 seconds to go in the fifth, Hee Jung hurts Wendy for the first time, brilliantly timing a right hand to snap the Czech girl’s head back. ‘Storm Surge’ reels, under fire and feeling overwhelmed by the speed, ferocity and inventiveness of The Empress’ attack.

Laila: “We are just shy of the halfway point and the Empress has her foot on the throat of her opponent. She is landing those black gloves with absolute authority. The South Korean may not be a one punch knockout artist, but she is tenderizing Pozler and getting her ready for the canvas.” 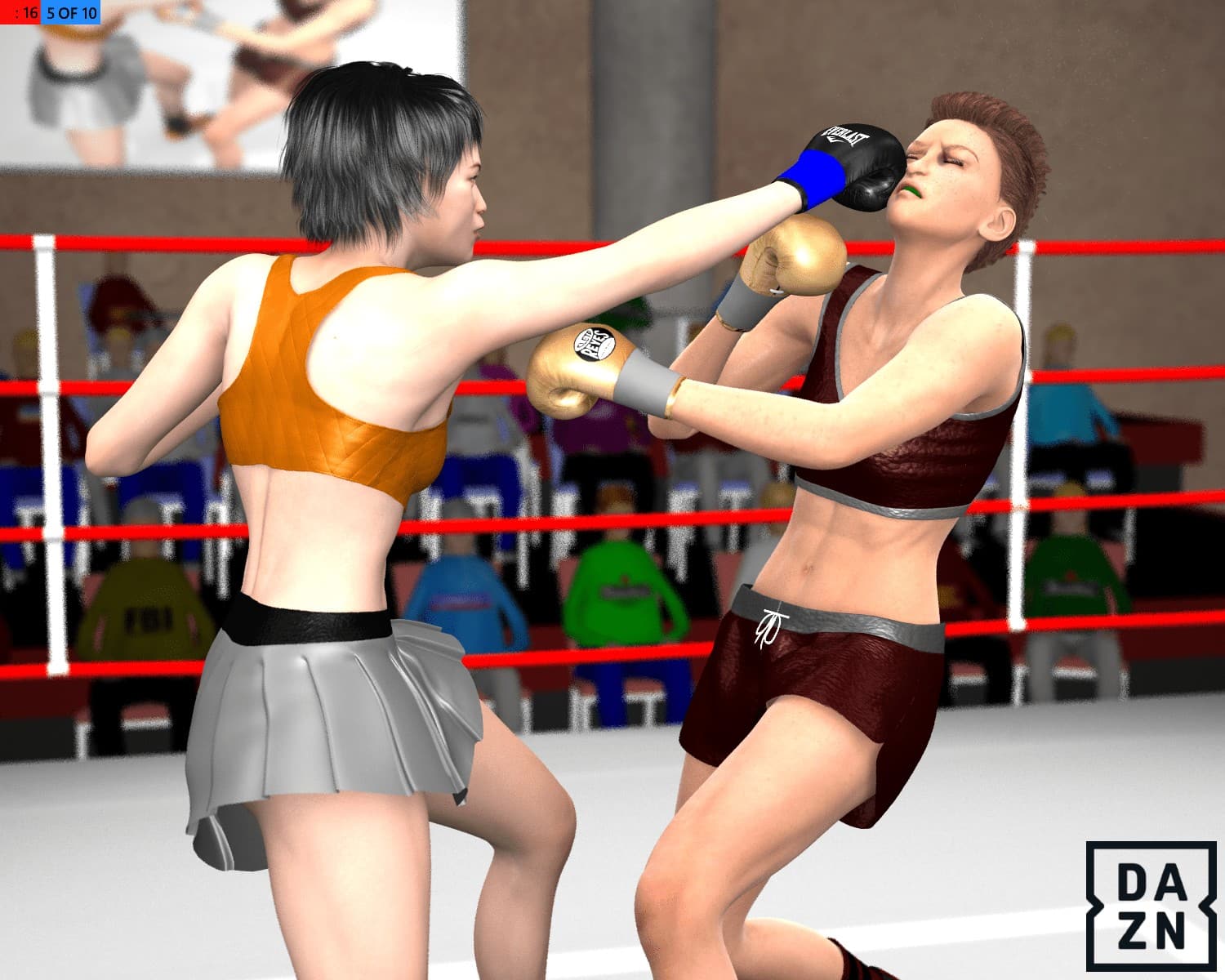 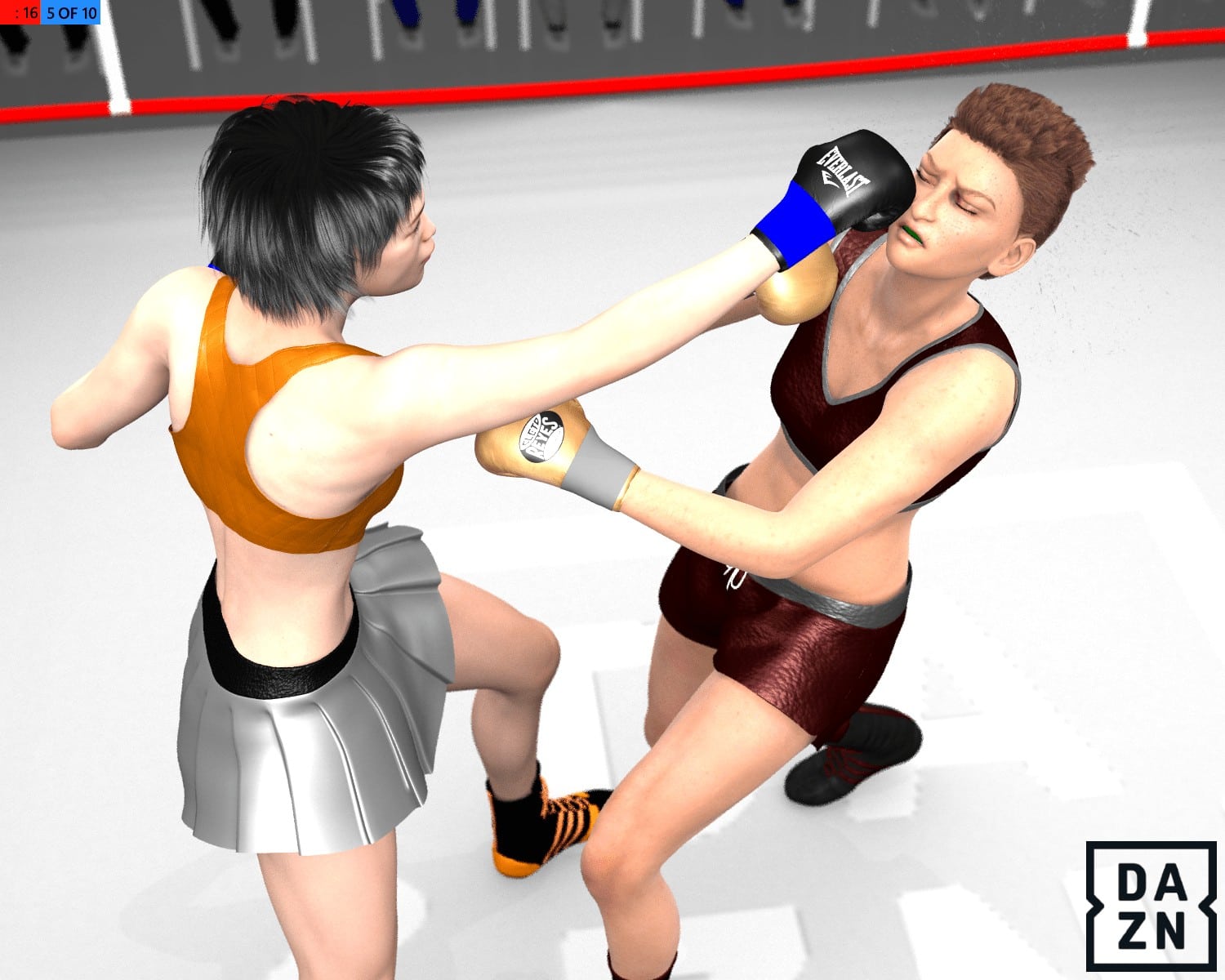 Staggered, Wendy goes into survival mode, with a very Hee Jung Park in close pursuit. Wendy bobs and weaves in the ropes, trying to endure the incoming leather.

Laila: “Hee Jung Park is going to work! She is looking for the finish! She can’t find that decisive punch right now, but it does seem to be coming. Pozler will need a dramatic turnaround. A Storm Surge, if you will.” 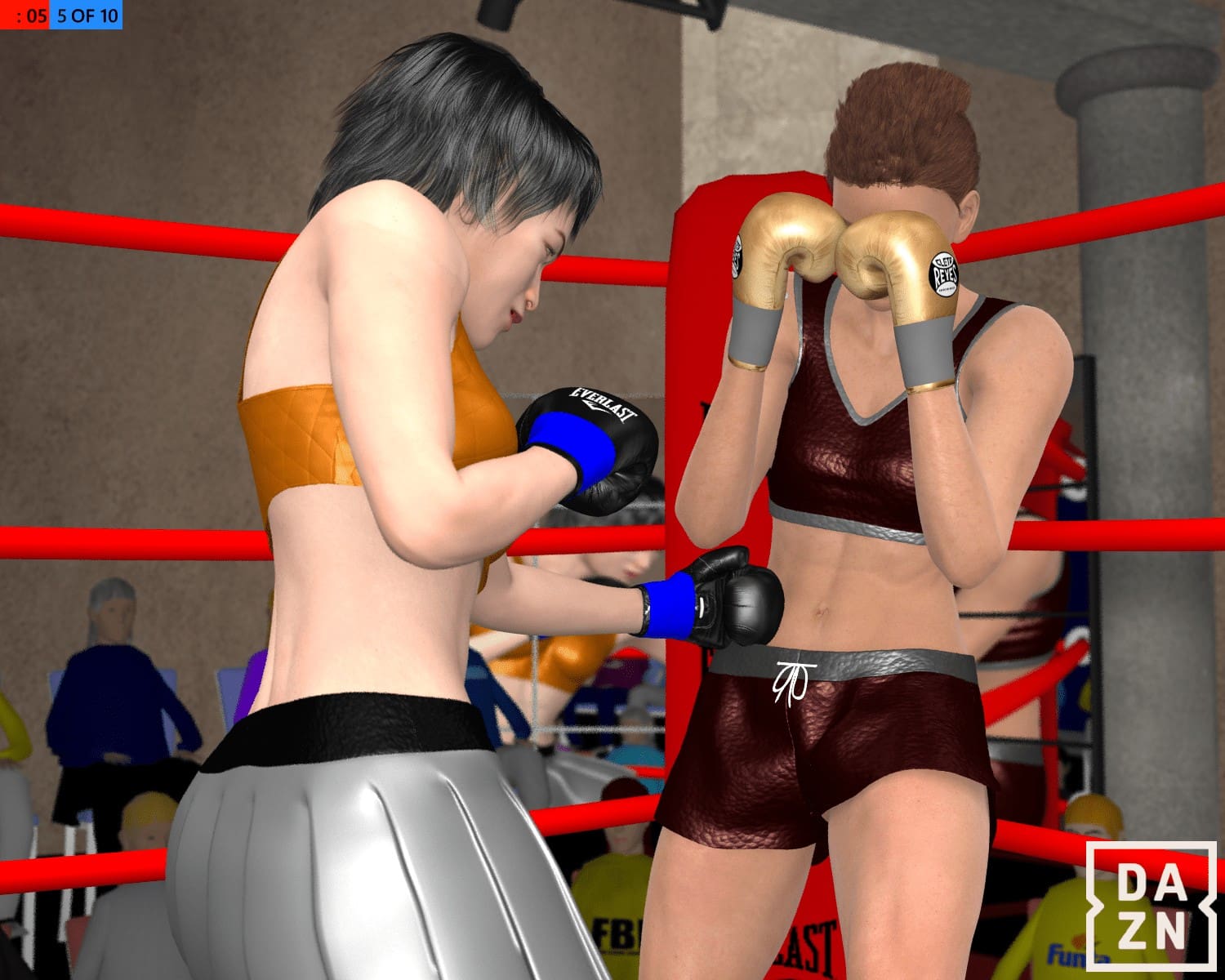 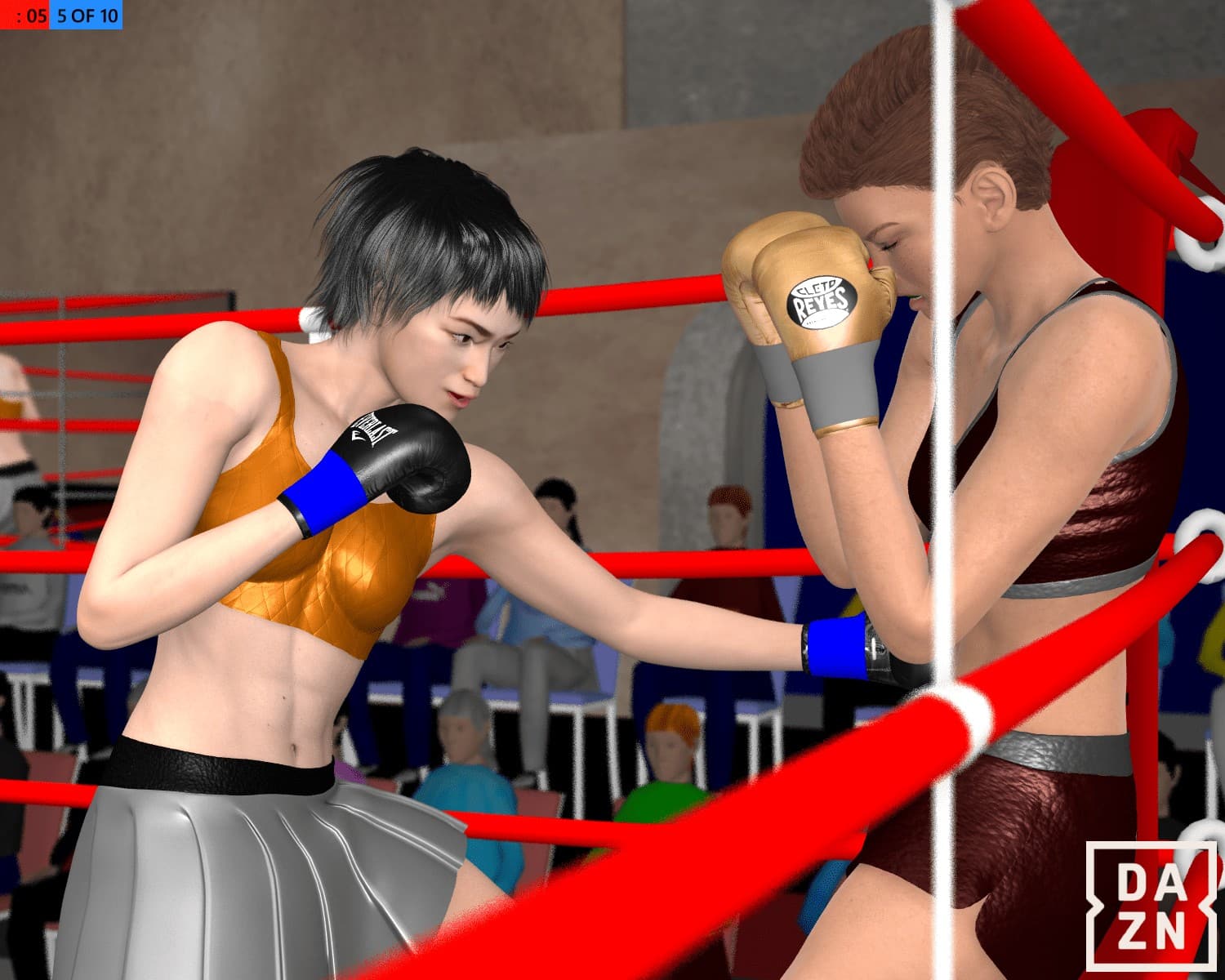 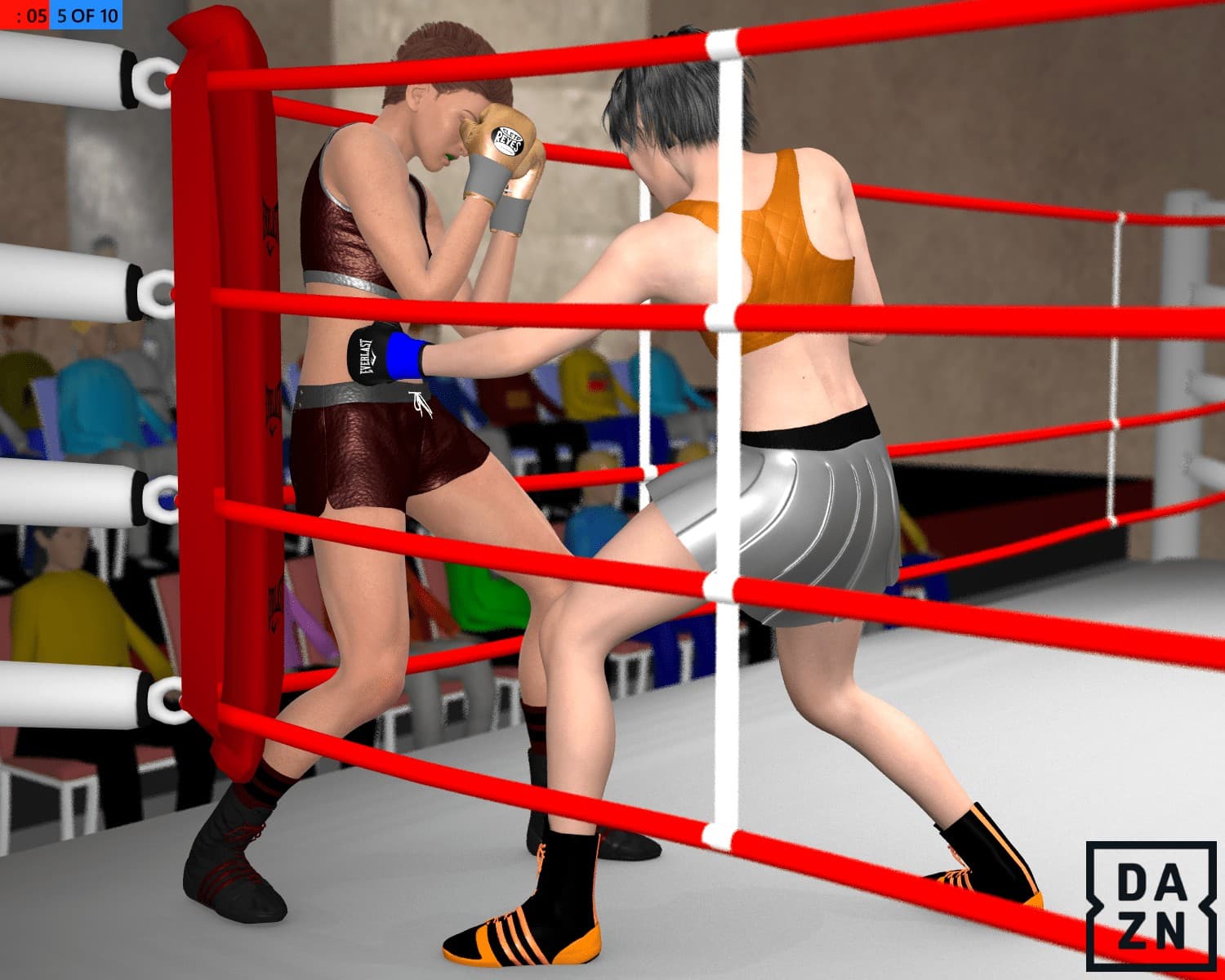 Pivoting for the finish

Wendy comes out in the sixth round with a renewed spring in her step as she tries to get back in the fight. It takes Hee Jung by surprise, but despite some initial success, it doesn’t do anything to stem the tide. Hee Jung, like the tide, endures.

Then the tide of the fight starts to wash Wendy away. Having spent a good deal of energy, Wendy fades in the second half of the round, letting Hee Jung’s black gloves do the talking.

Those black gloves conceal fists that want to do damage. A fusillade of artillery from the smaller fighter gets Wendy reeling towards the ropes under intense pressure. Hee Jung’s offence carves open a space for a big right hand, which Hee Jung steps into and turns Wendy’s head around like a top.

Laila: “Pozler is hurt!  That right hand buckled her knees. This one might be over shortly!” 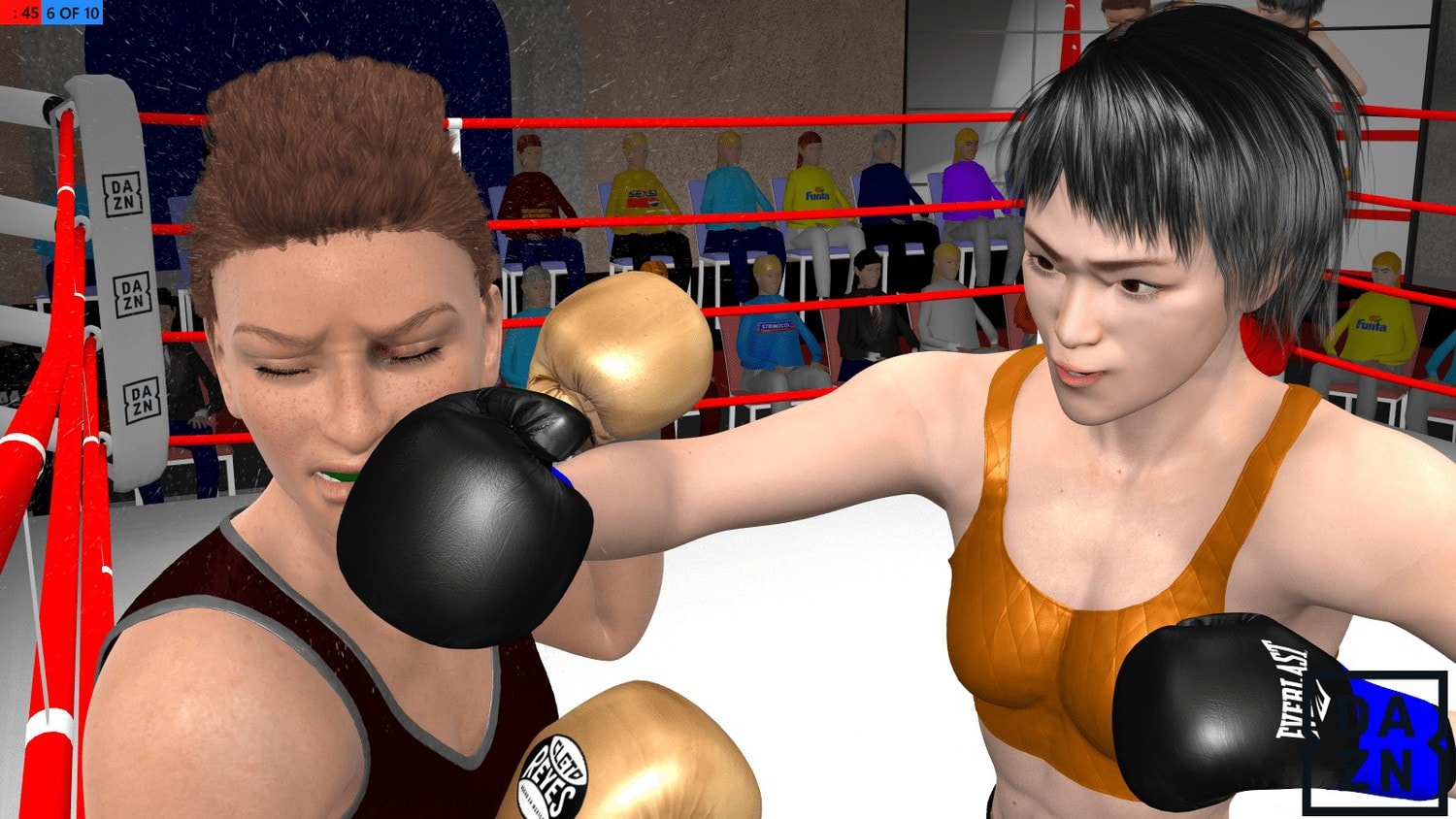 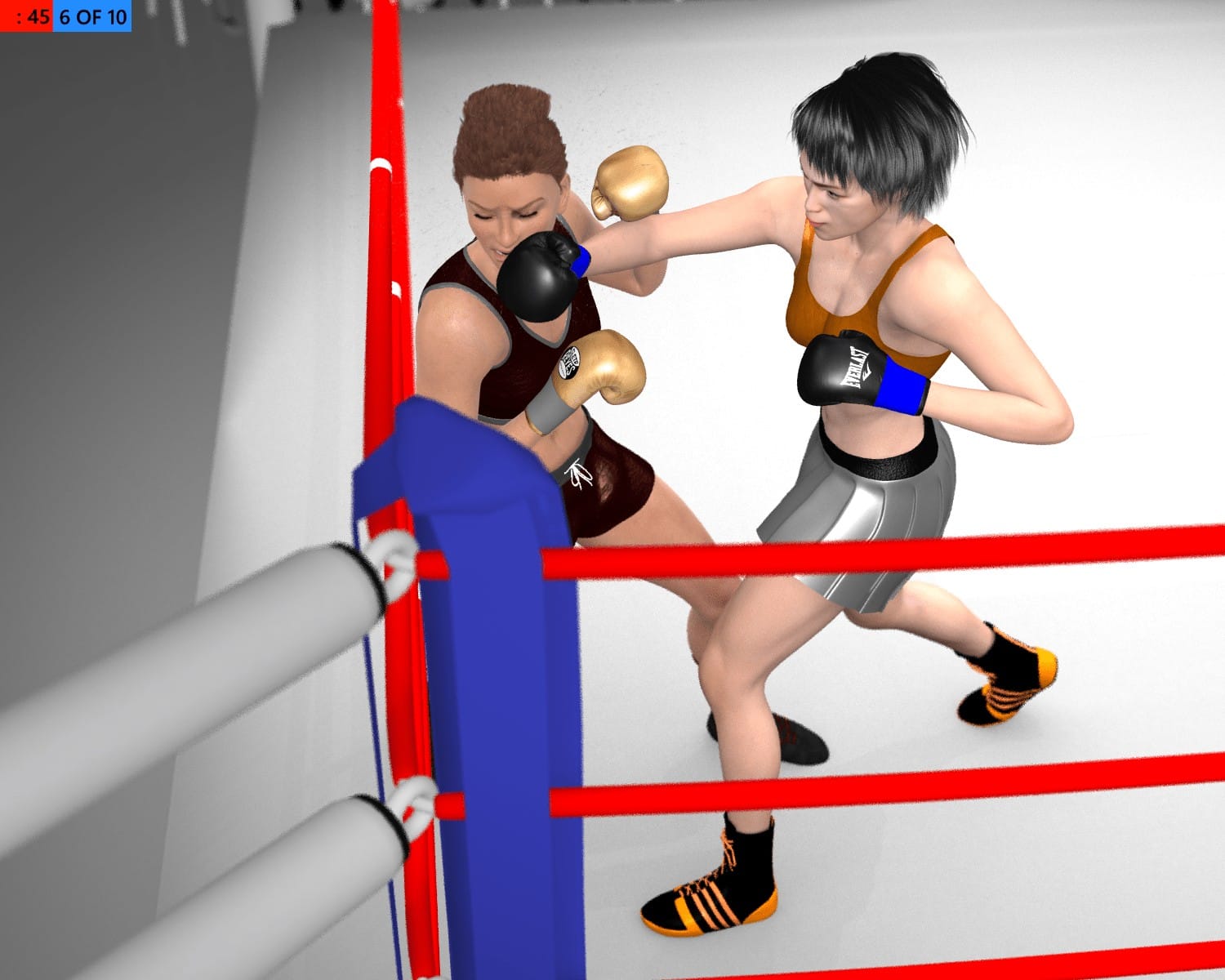 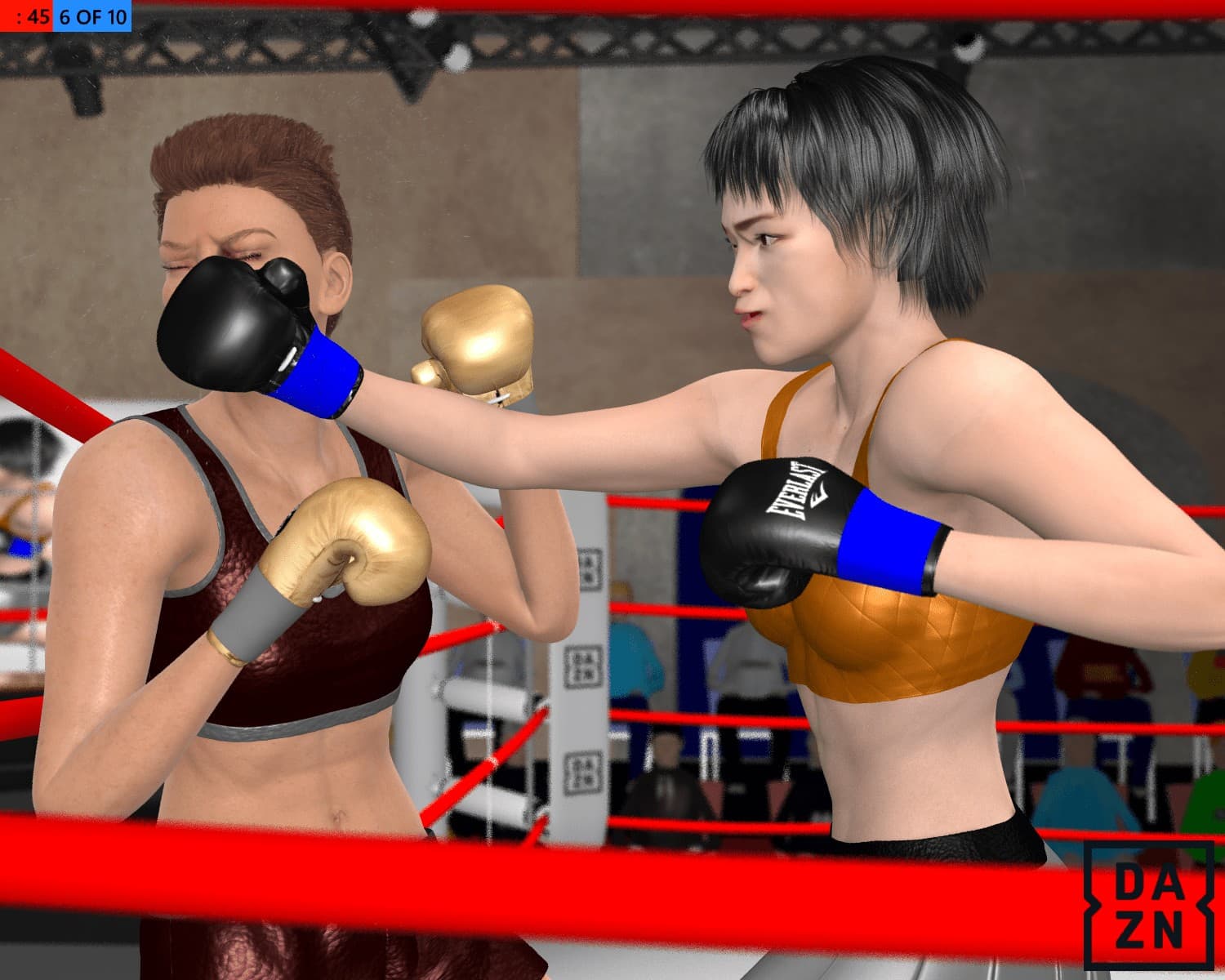 Hurt, Wendy desperately tries to fire back, but that only make it easier for the Korean to pick out an uppercut that catches Wendy under the chin. With Wendy moving forward, Hee Jung’s punch only gets more powerful. Wendy’s eyes squeeze closed as she tries to endure.

Laila: “Wendy is courageous until the end, but she needed to grab on, instead of trying to fire back.” 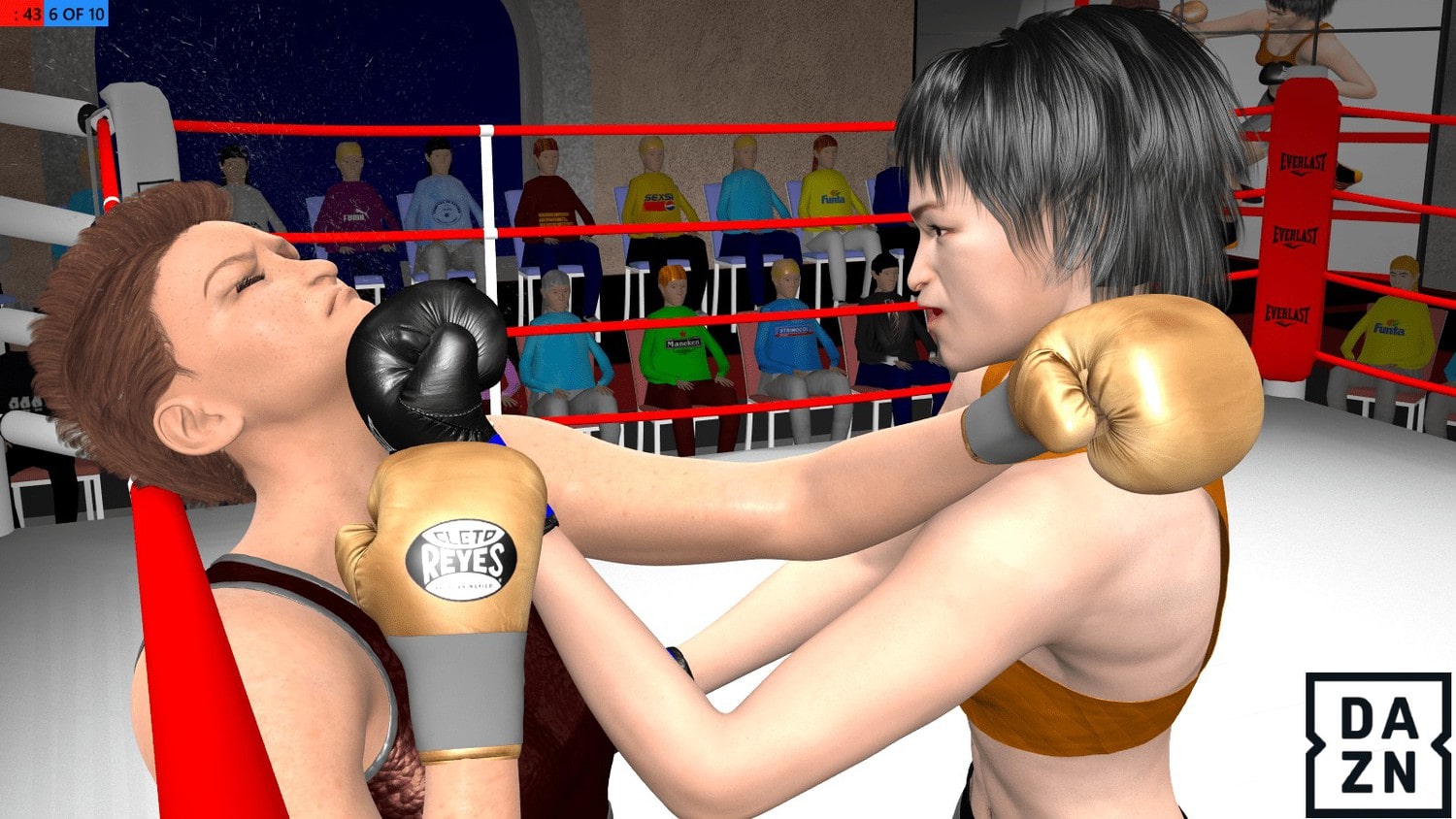 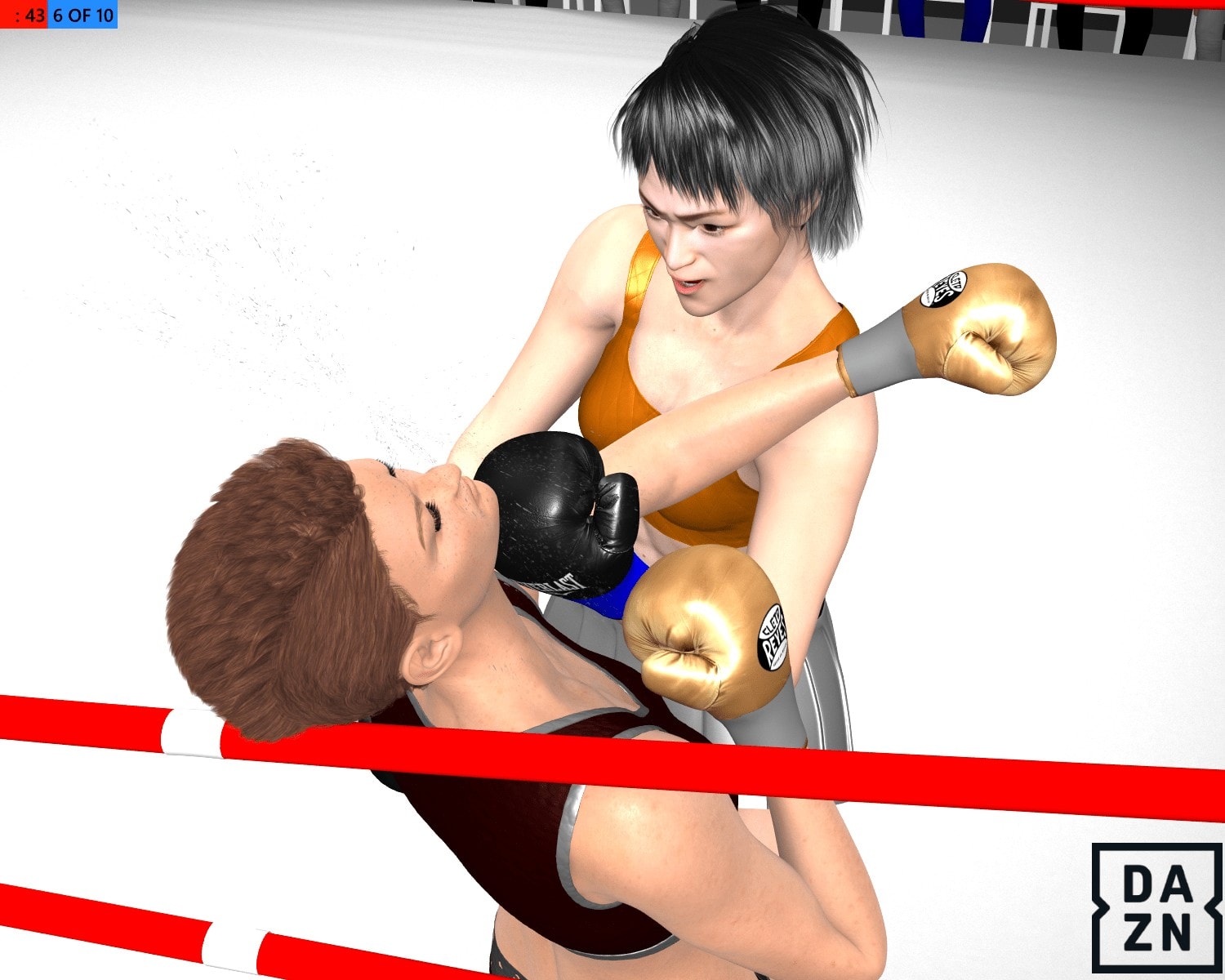 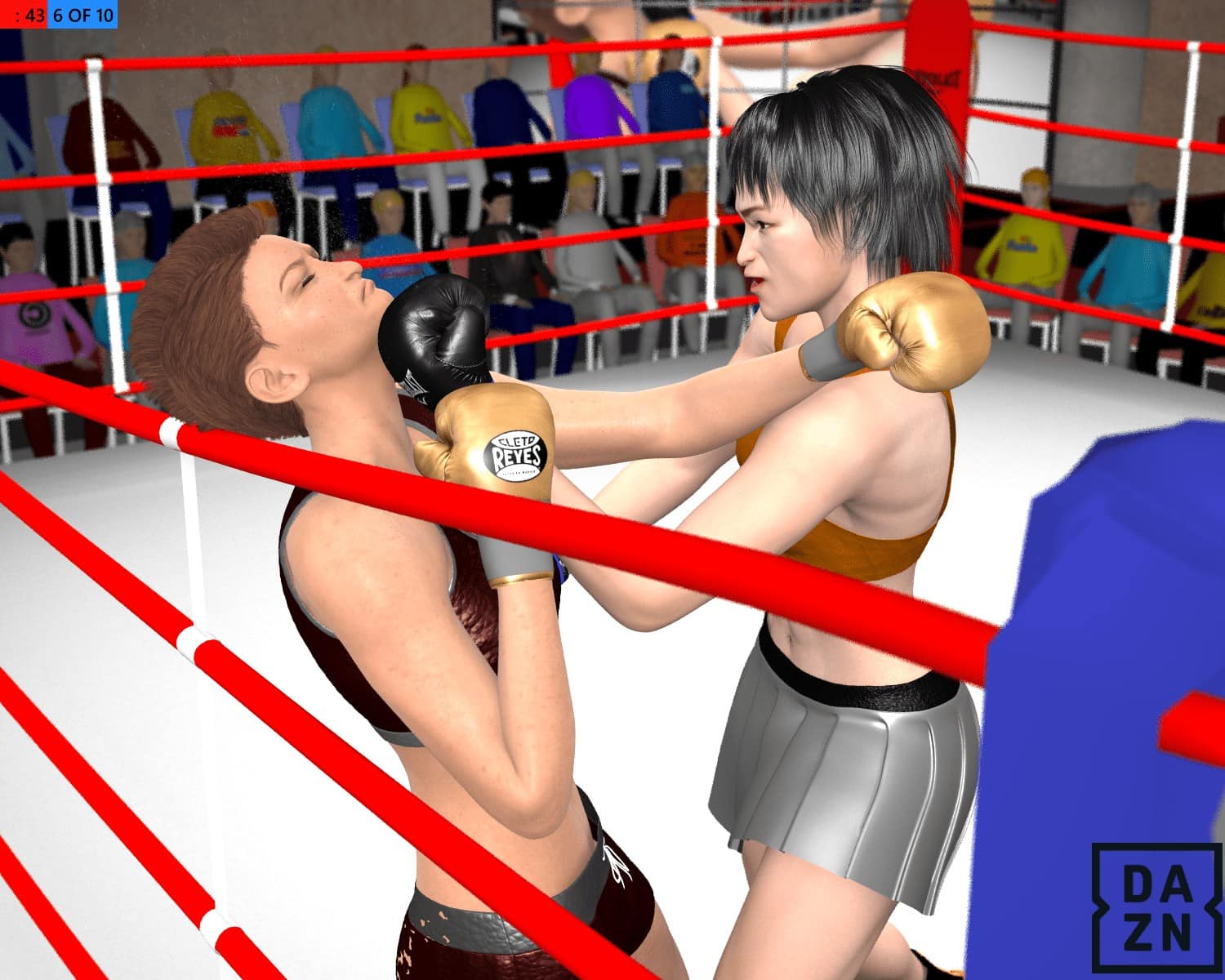 After being clattered twice in short succession, Wendy’s legs lose strength and she collapses to the canvas. Hee Jung walks away with a shrug on her largely unblemished face as if to say ‘is that it?’

Referee Kanti Agrawal is quickly on hand to observe the downed fighter. She quickly reaches her decision.

Laila Ali: “When even the lenient Kanti Agrawal does not give a count, it just underscores the authoritative nature of that knockout from the Empress, who looked in fine form against a game, but overmatched opponent.” 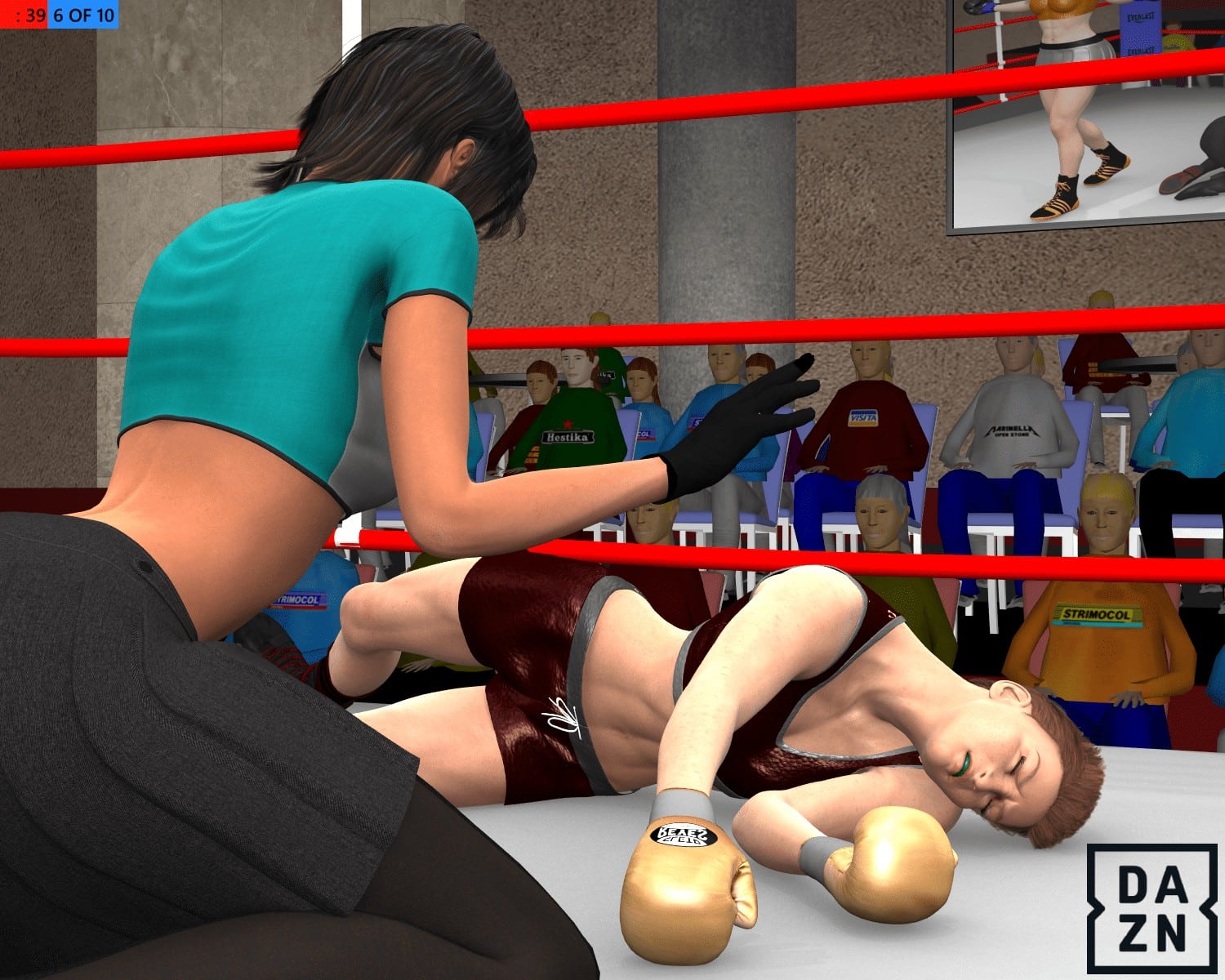 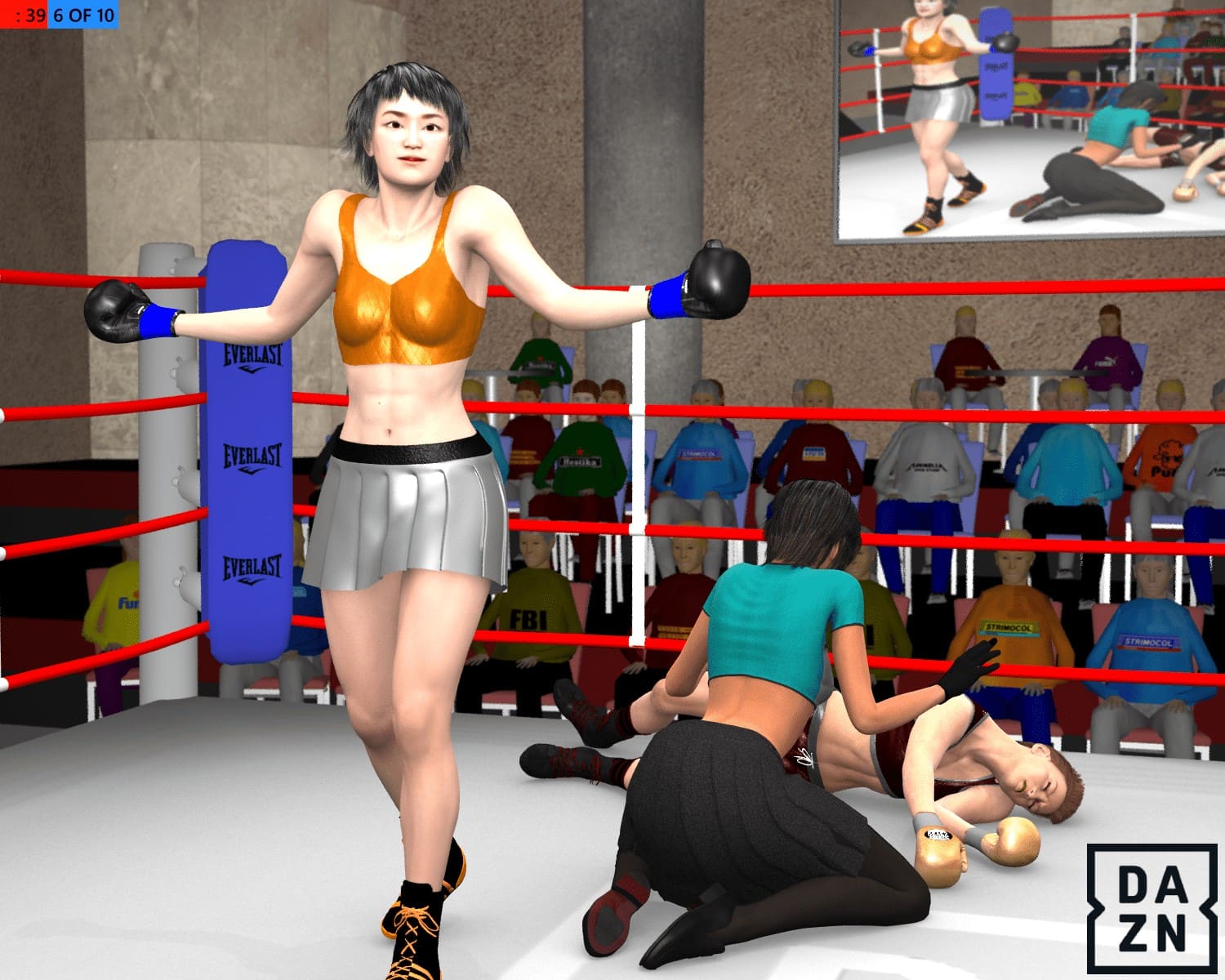 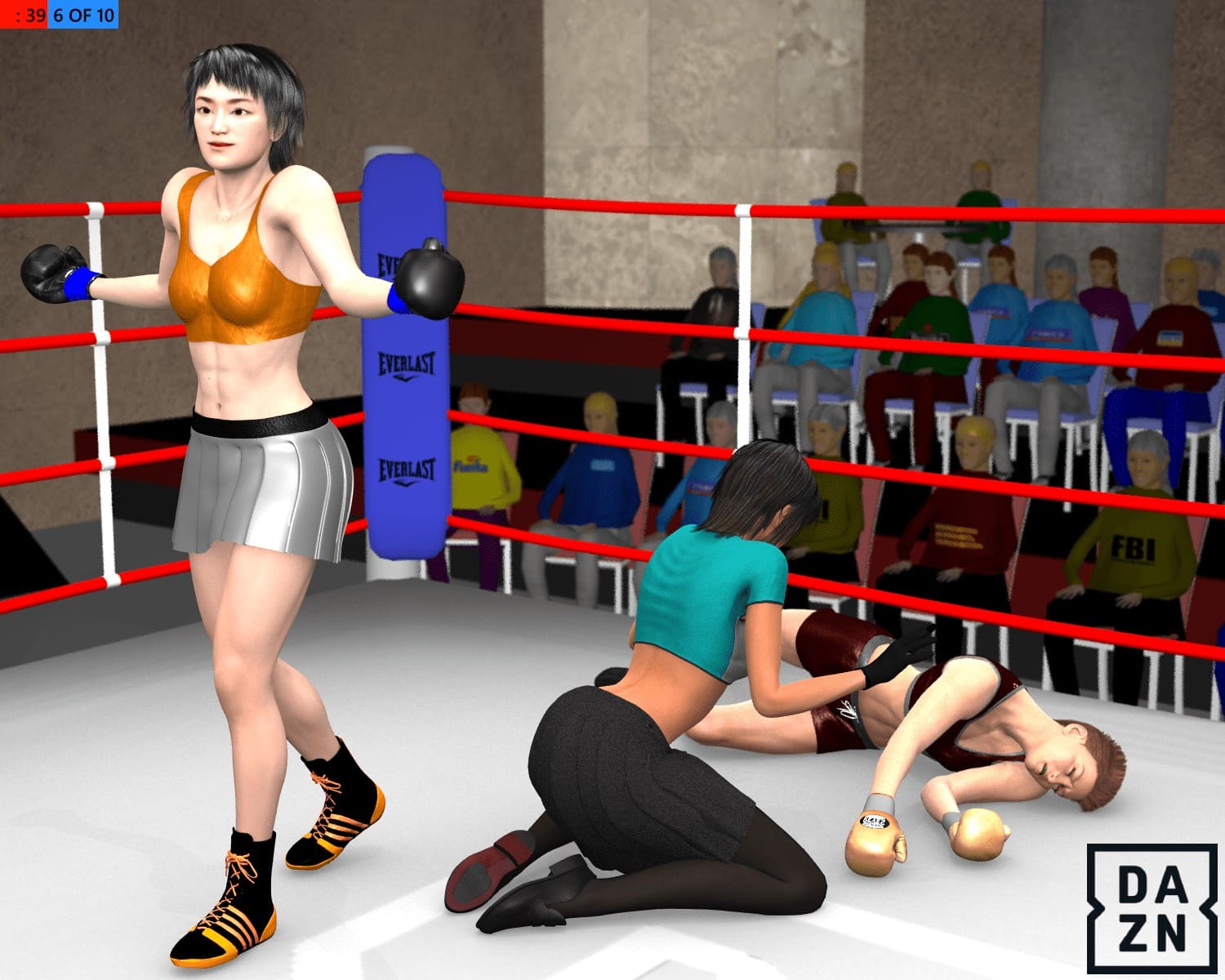 Calling out the Cobra

After being checked out by the medical staff, a dazed Wendy is helped to her feet and then out of the ring. Her chance at a world championship is dashed.

Hee Jung gets the joy of getting her hand raised in front of her home crowd in Seoul. The win moves her record to an impressive 30 wins and 7 losses, with 16 wins by knockout.

With a belt slung over her shoulder, Hee Jung looks like an impressive champion. 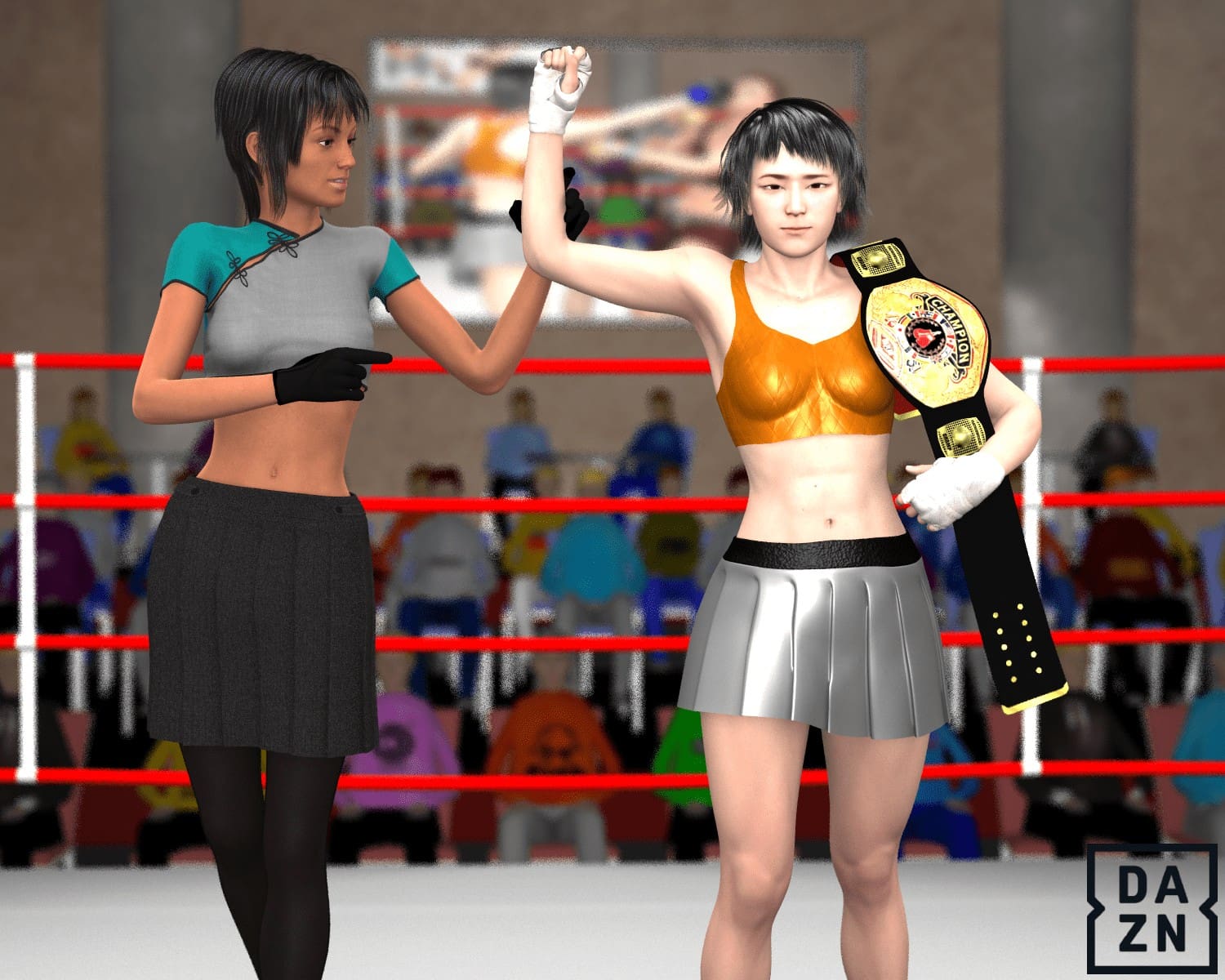 Laila: “While I didn’t make the trip to South Korea, we will hear from the champion after her big victory.”

Hee Jung first speaks in Korean to the Korean crowd.

Hee Jung: “Thank you, for coming out to support me. I know I cannot always fight in front of you, but I know that when I do, there is no one that can beat me. You give me the boost that I need in training and in front of you today, I would have given everything to win. I cannot thank you enough.”

Then the South Korean switches to English, keen on delivering a message to a particular person.

Hee Jung: “But a champion is only as good as the fighters she faces. This was a fight I wanted, because I wanted to fight at home. But the big fighters are in America and Europe, and I must travel and take on the top contenders. So to my top contender, Virani MacVicar, here’s my message. You want to prove you are a top fighter? Prove it.”

The interviewer follows up with an obvious question. What does she think of her desired next opponent.

Hee Jung: “I think she’s the number one contender. But there’s a reason I am the champion. And I’ll prove it.” 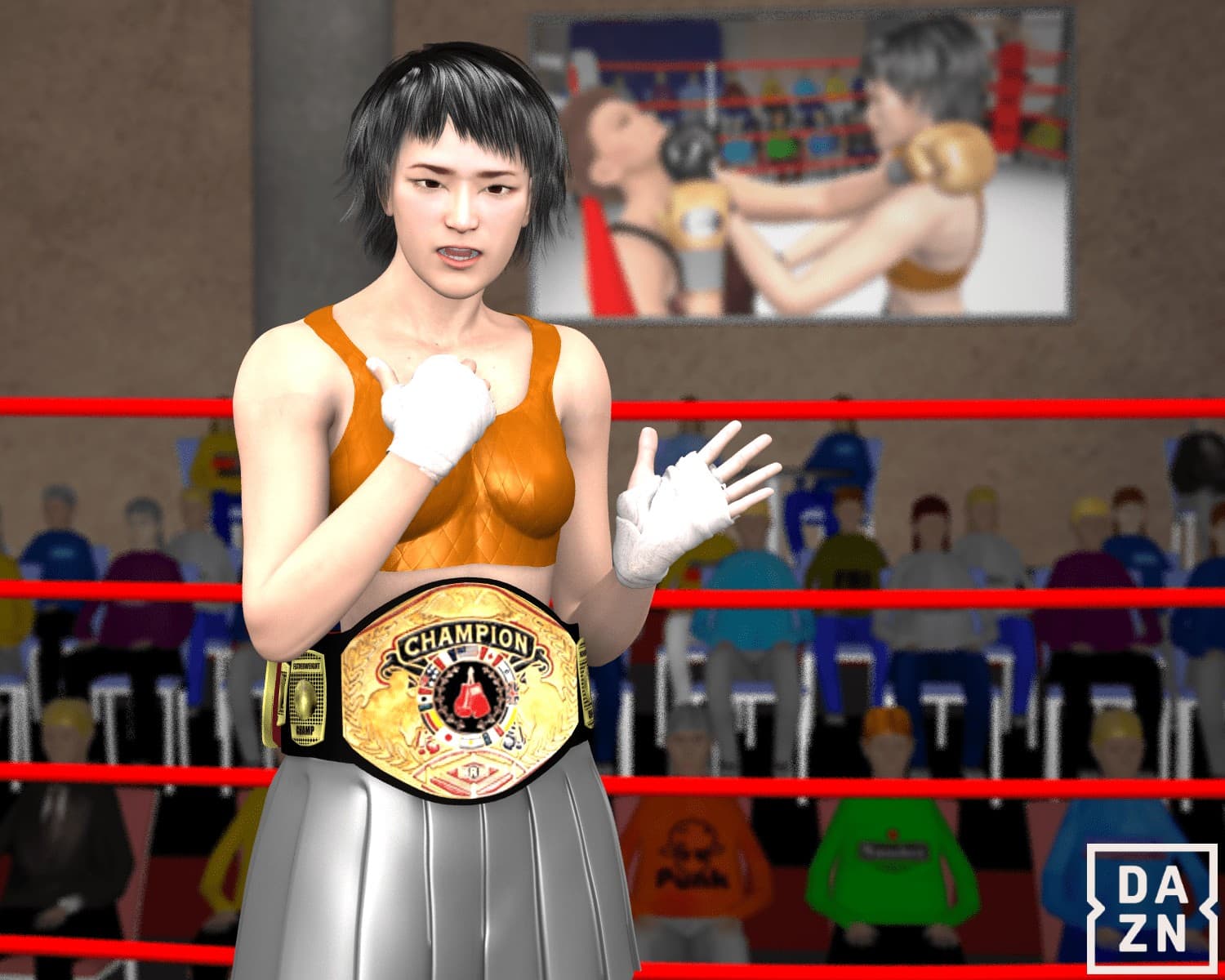 Featherweights on the rise! 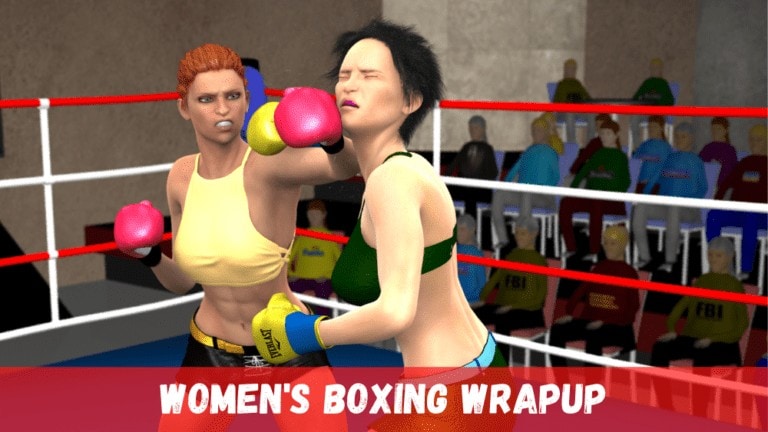 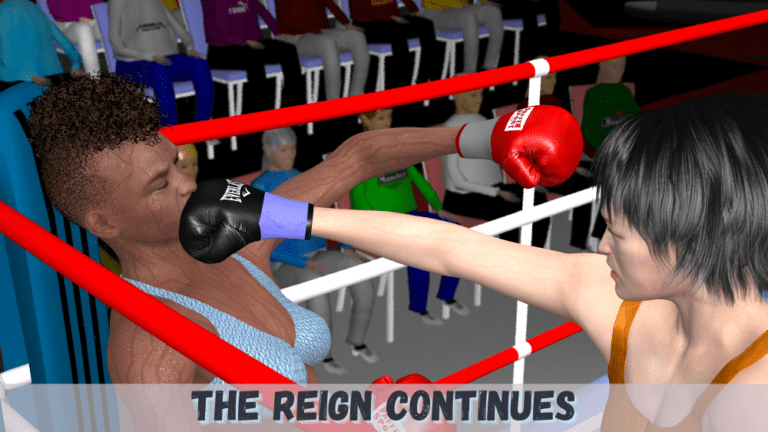