Elsie has a crafty start against Sophie

Esther: “Sophie Schumann plays host to Elsie Nadege in a key matchup in the Lightweight division. The action starts…”

Elsie approaches the middle of the ring calmly, looking solid and determined in the face of the kind of Top 10 entrant that took down most of the opponents she faced. Sophie is also pretty calm. A lot more than in the past, when she would zoom to the middle and immediately look to pound the opposition.

The first punch comes very quickly, though. Just three seconds gone and the African opens hostilities with a sharp jab. Picasso has to lean back to make it miss by a hair as a red glove slips inside the orange guard.

Elsie thinks: “Welcome to my world. I throw a lot and this time will be no different.” 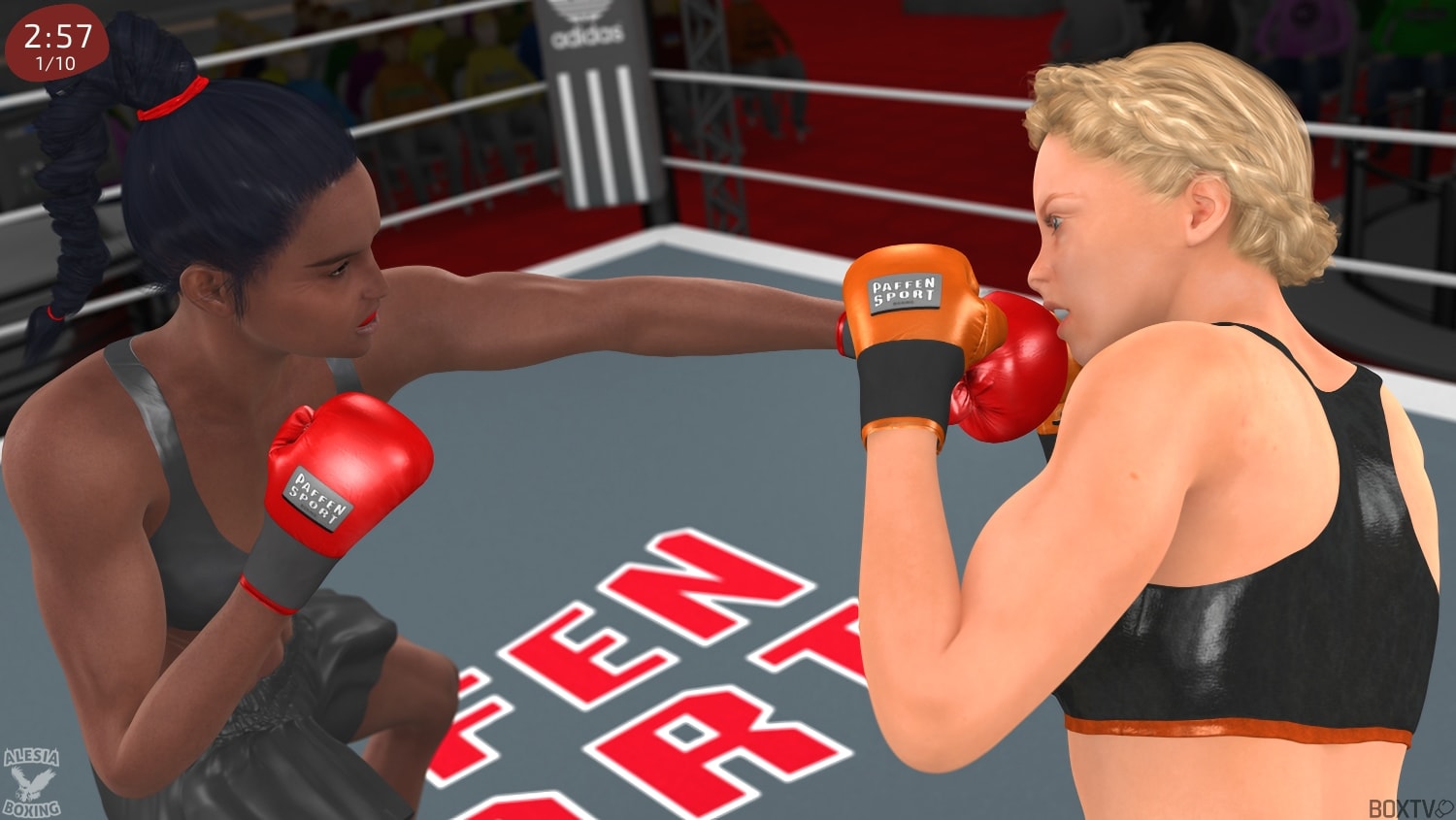 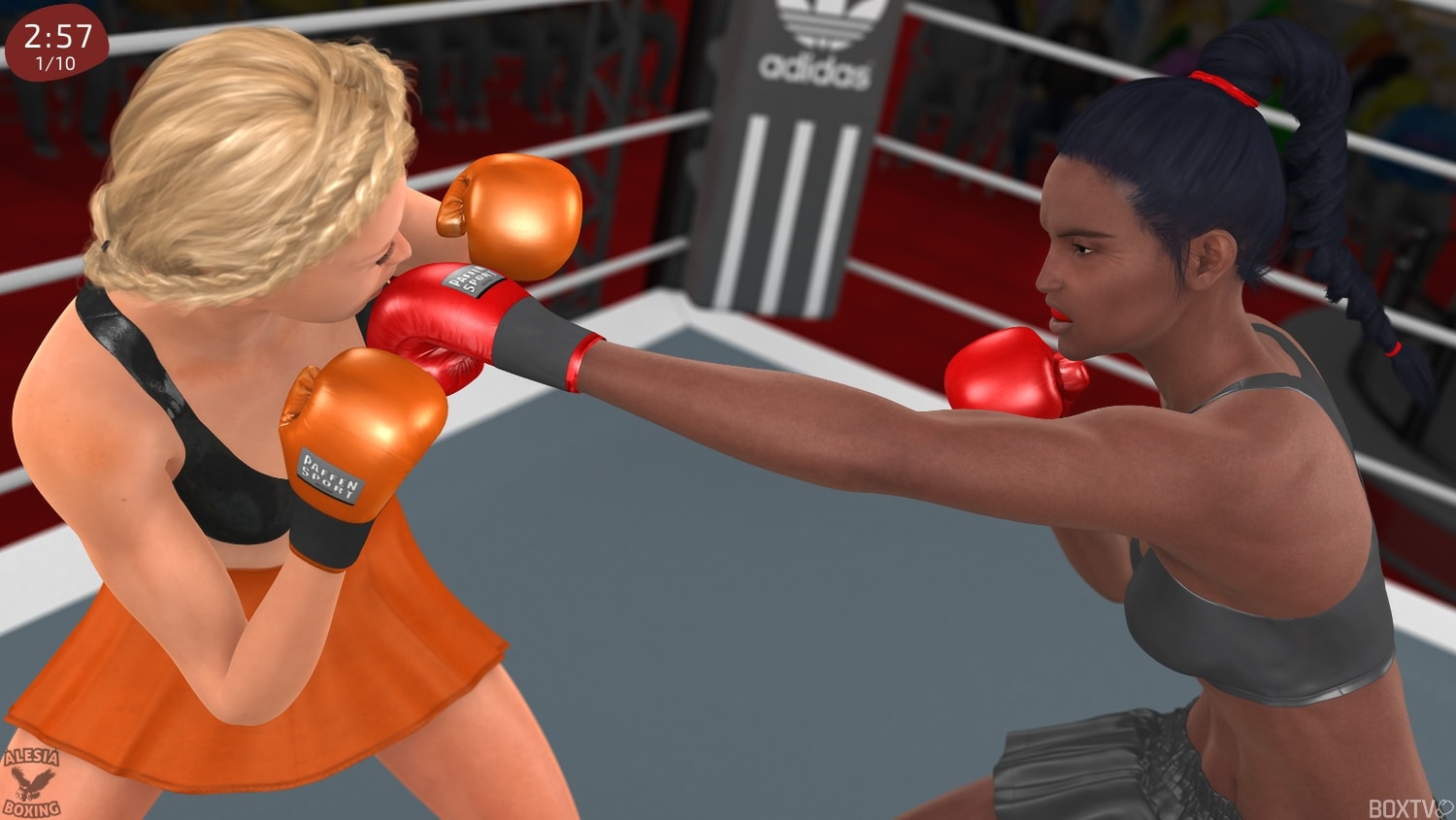 The Cameroonian keeps darting quick shots to keep the blonde’s defense busy. When she’s trying not to get leathered up, it’s much harder to work on setting up the devastating power shots that she is known for. Impetus gives the black woman some control of the action in the early phase.

Now experienced enough to understand that she can’t leave the stage entirely to her opponent, Sophie starts firing back. She double jabs, making Elsie block with her right glove. Then, she follows up with a right hook. Your Highness makes a sweeping motion with her left arm to bat it down and deflect the arm, as the inside of her glove controls Sophie’s.

Esther: “What’s the difference between elite fighters and the rest?”

Anna: “Speed of execution. In the upper tier of any sport, the athletes make accurate and technically correct moves much faster than everybody else, just like Elsie’s little tap to kill a punch. You have to be strong and confident to do that.”

Esther: “Something that world champion Zohana Patel, who is ringside, certainly can appreciate.”

Akane: “Who’s this stunner across the ring?”

Alesia: “Zohana, the champ I faced in an exhibition.”

Akane: “Damn. I’m not into women but I’m into Zohana Patel.” 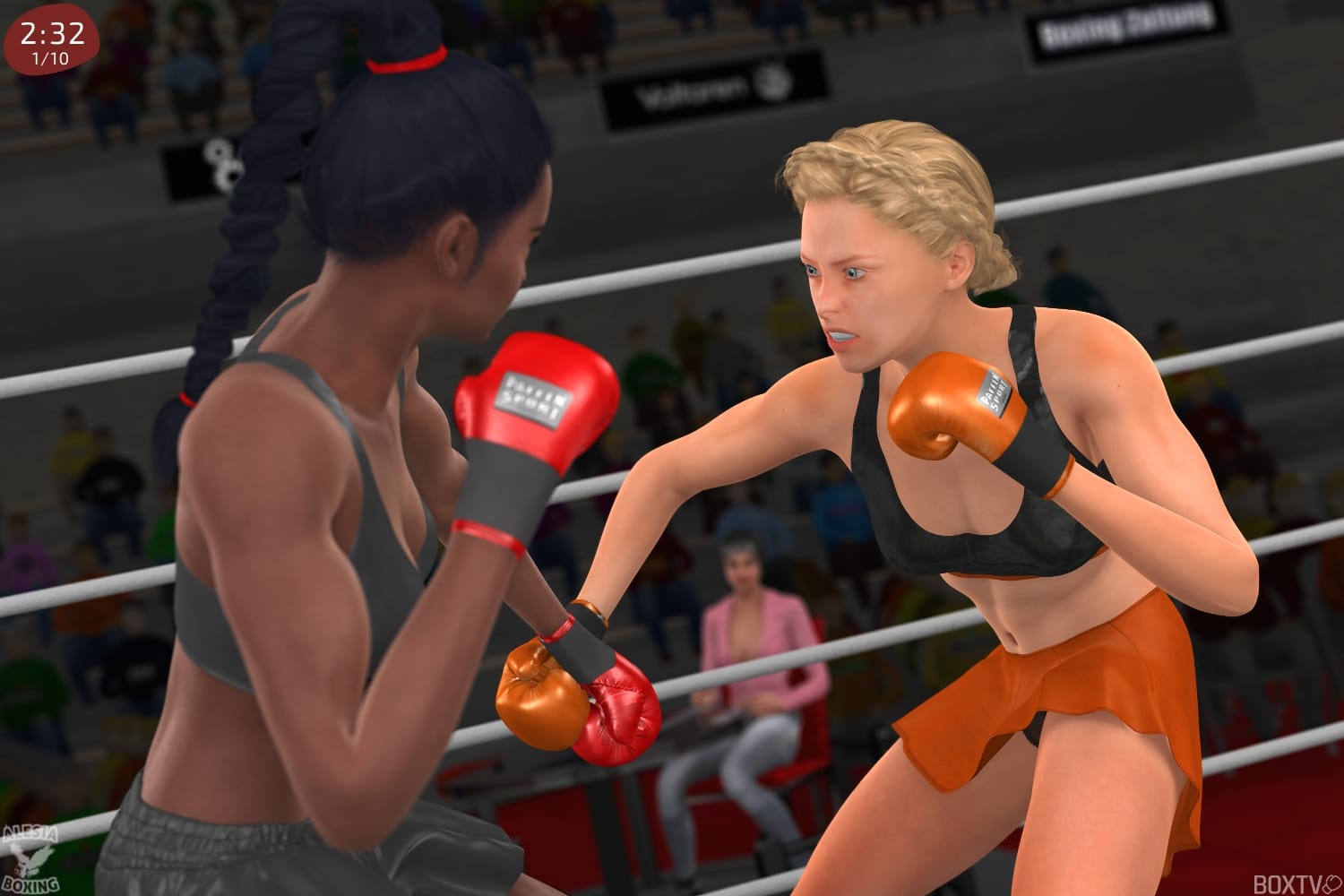 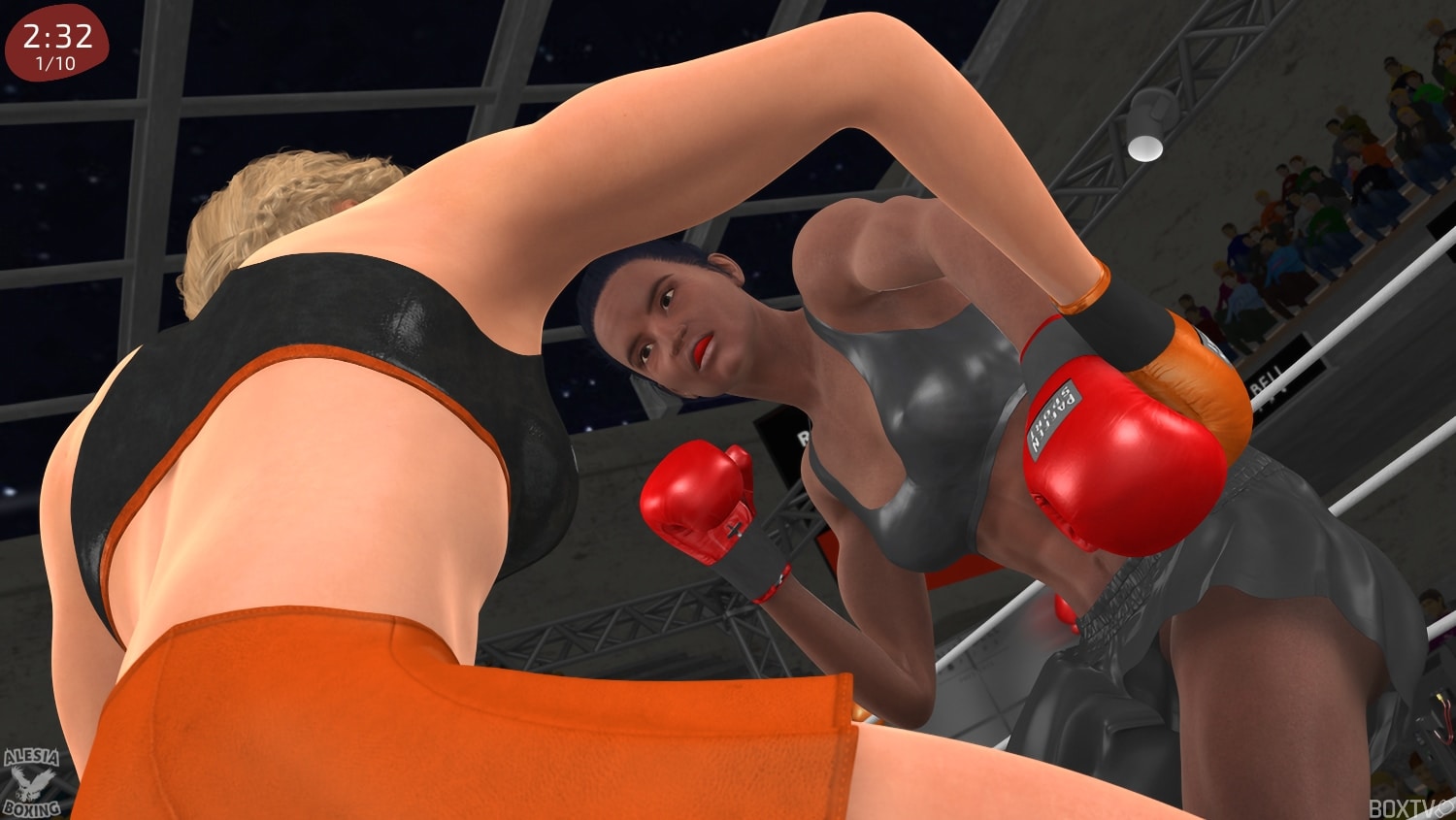 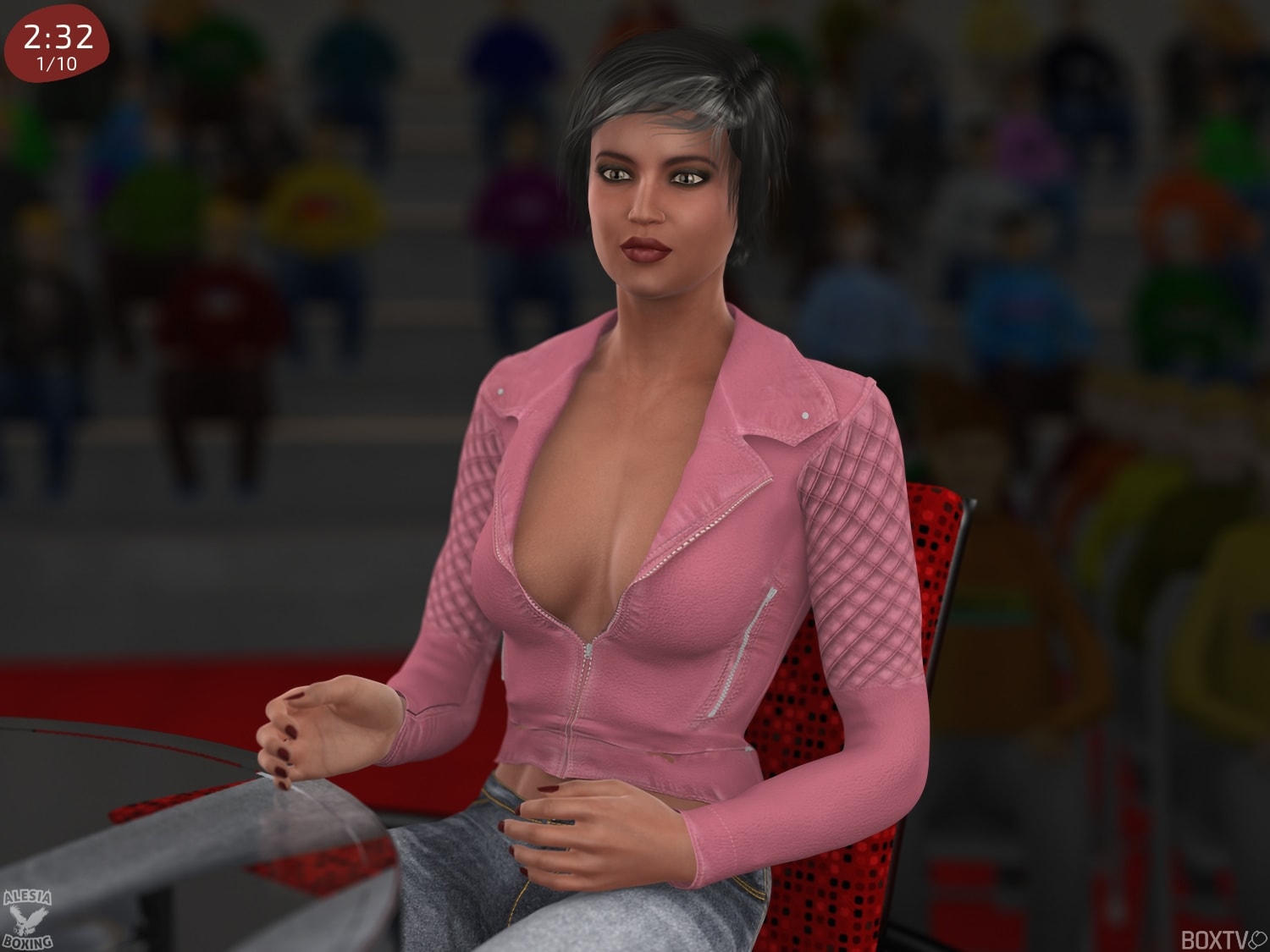 The perfect defensive move messes with the German’s balance. The African shifts her weight to the right hand to pop it in the middle of Sophie’s face.

Elsie thinks: “The sound of the gloves in their faces, and their little groans? It never gets old.”

Alesia: “Such a clever move.” 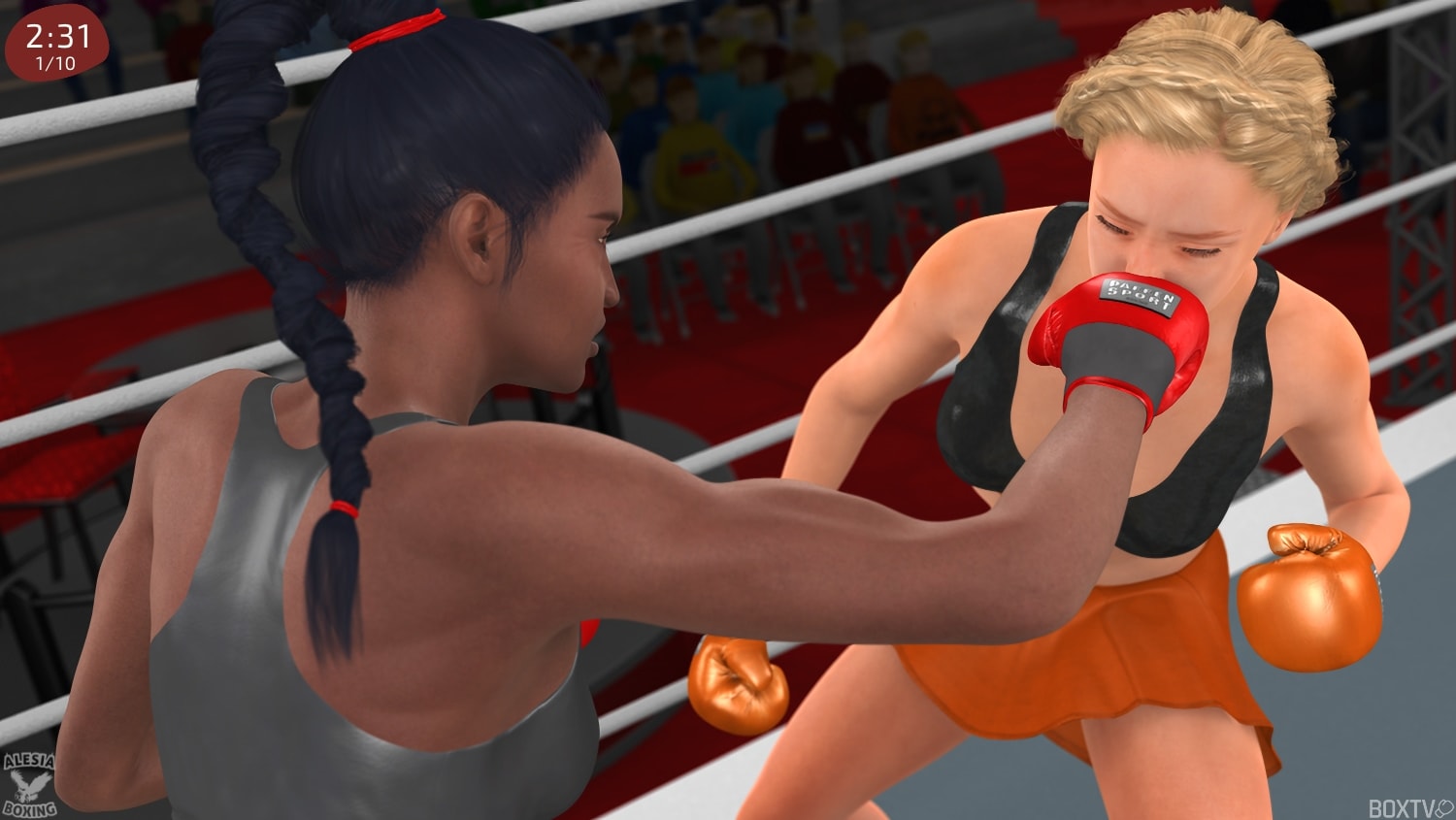 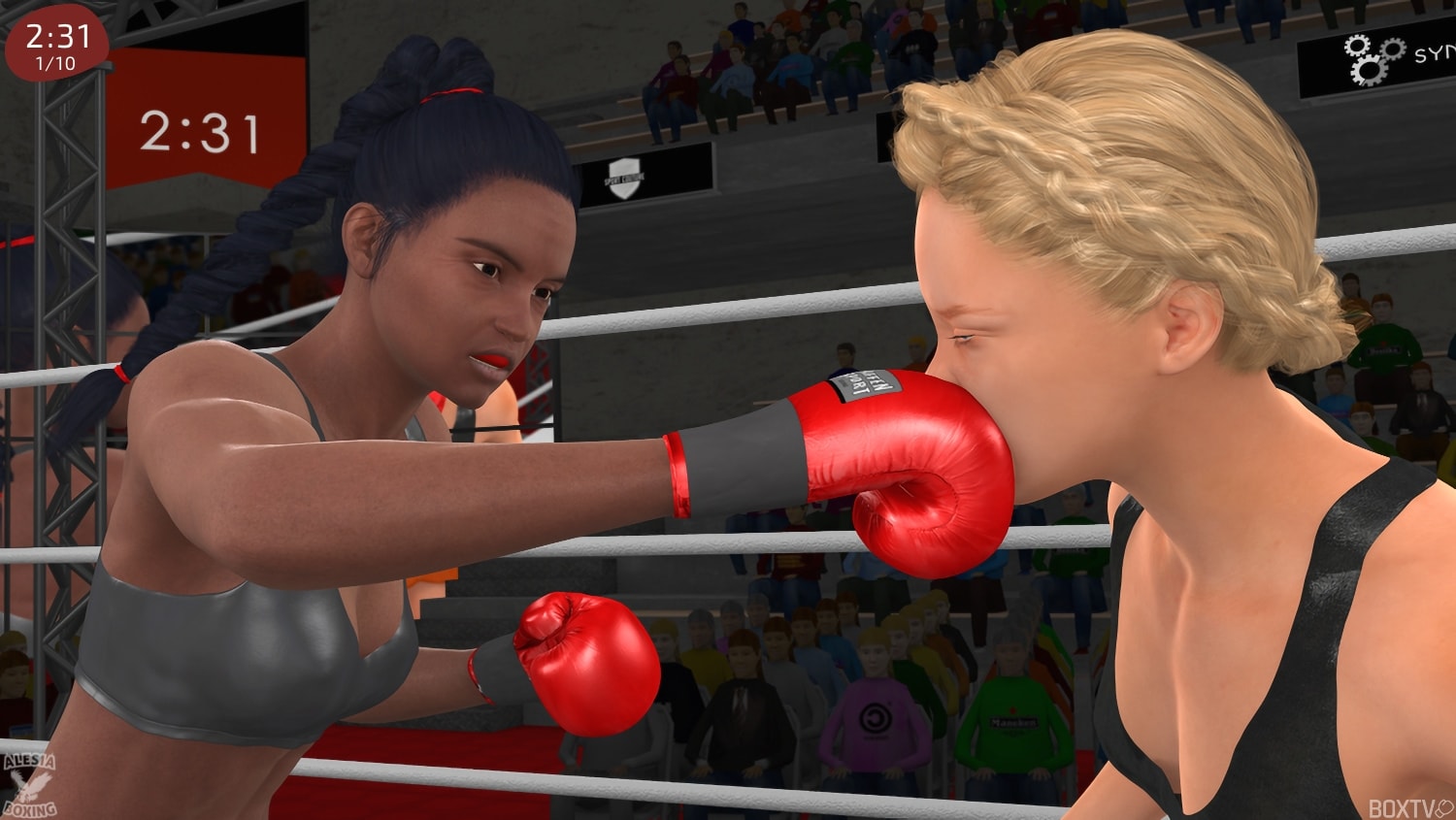 The young Bavarian doesn’t take “no” for an answer. She gets to work by increasing the pace and going forward. Not willing to throw caution to the wind, she bobs and weaves between combinations, looking to force Elsie into making a mistake and leaving an opening.

The African remains steady, with little blocks and dodges that don’t disrupt her stance while preventing major damage from the bitter orange.

Sophie can finally connect as we approach the halfway mark of the round. She comes in to drive a solid left hook that crashes into Elsie’s chin. The visitor fires back at the same time, with an uppercut that thumps the blonde’s chin.

Esther: “We have a fair amount of action in the opening round, with good technique on both sides. I do believe that the African has a bit of an advantage so far, like the border guard that doesn’t let you through easily at customs. What do you think?”

Anna: “We’re seeing that you have to pay the price to have a good chance to hit her. Nadege keeps throwing and her hands are very accurate. It takes elusiveness to evade border police!” 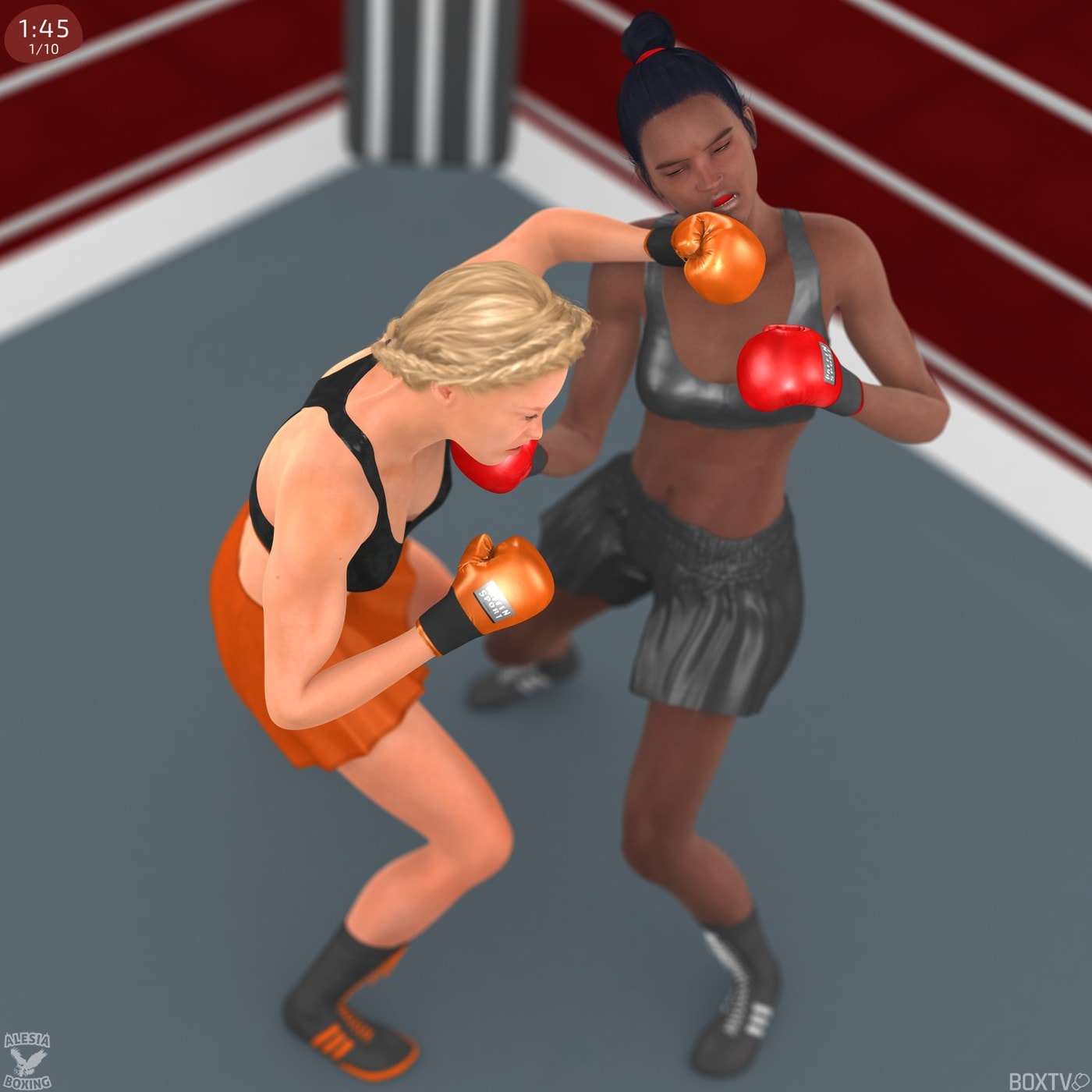 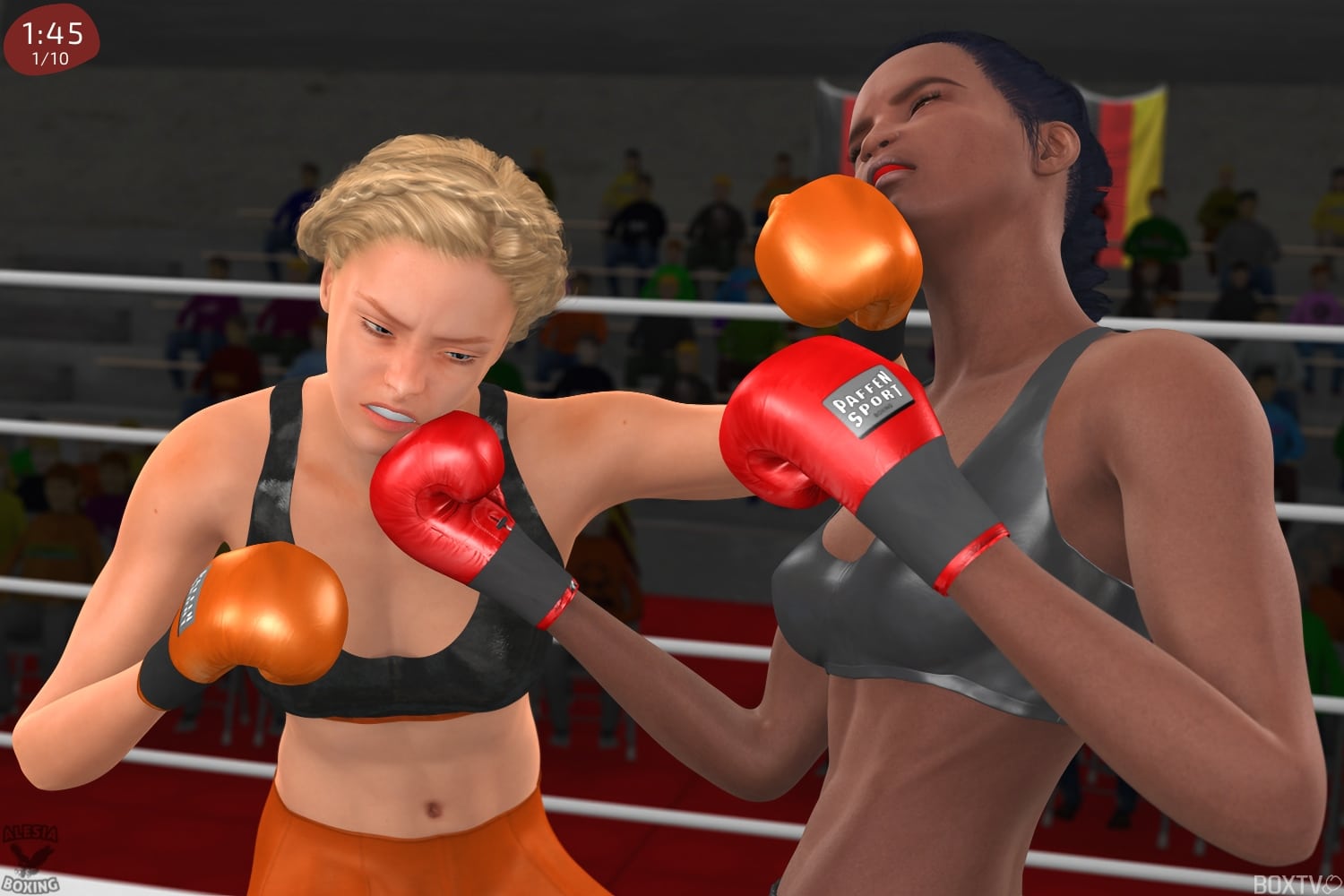 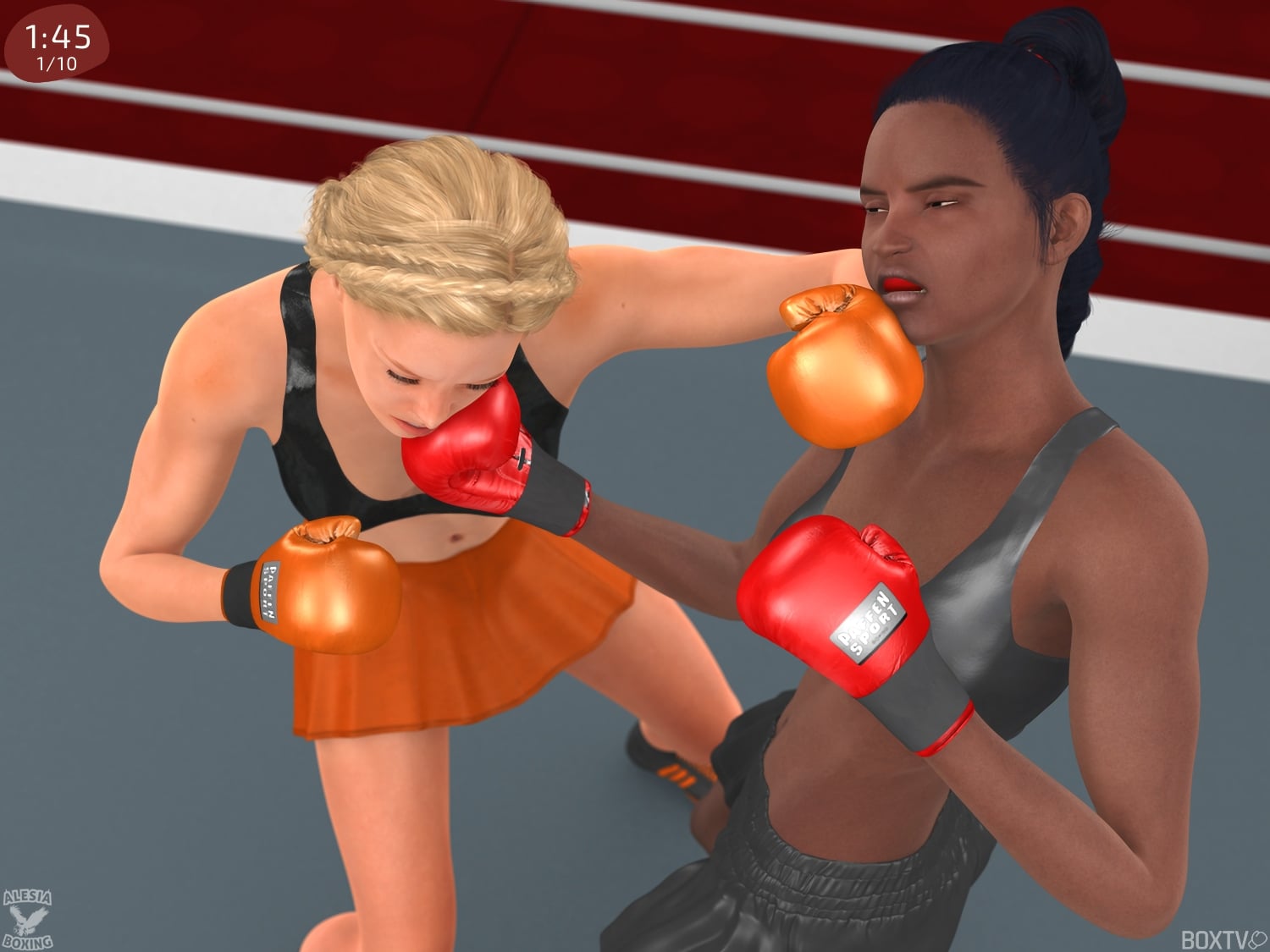 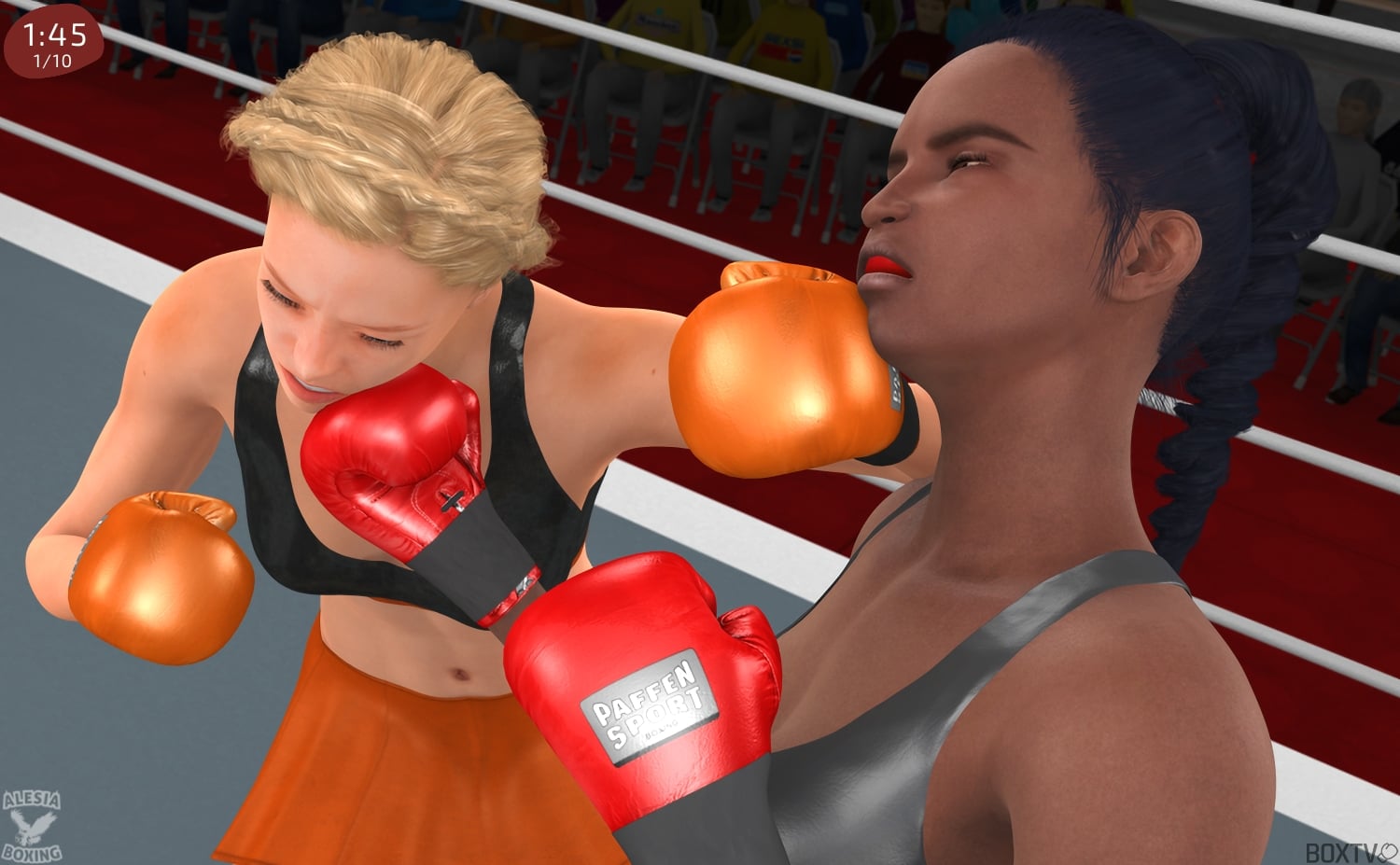 Sophie thinks: “She’s good, but I can hit her.”

A successful strike is all Picasso needs to turn on the lights of her studio. The fistic artist applies some pressure while playing cat and mouse with Your Highness. A little feint here, a dodge there to avoid the volume punching, and a lot of space measurement to find the right range.

After some fruitless exchanges, the Bavarian stands still with her left hand a little low to tempt her opponent to throw the right hand. When she does, Sophie leans forward and lets a straight left fly. Pish! A splash of orange in the jaw, to the delight of the Munich crowd.

Esther: “Sophie Schumann is a creative boxer and Elsie Nadege just got fooled by a devilish little manoeuvre. Who ever thought that counterattack painting would be a thing?”

Anna: “That part of her game has grown in significance in the last couple of fights, and she needs it to work today. Countering effectively is the best way to weather the storm of punches that the visitor made her trademark over the years.” 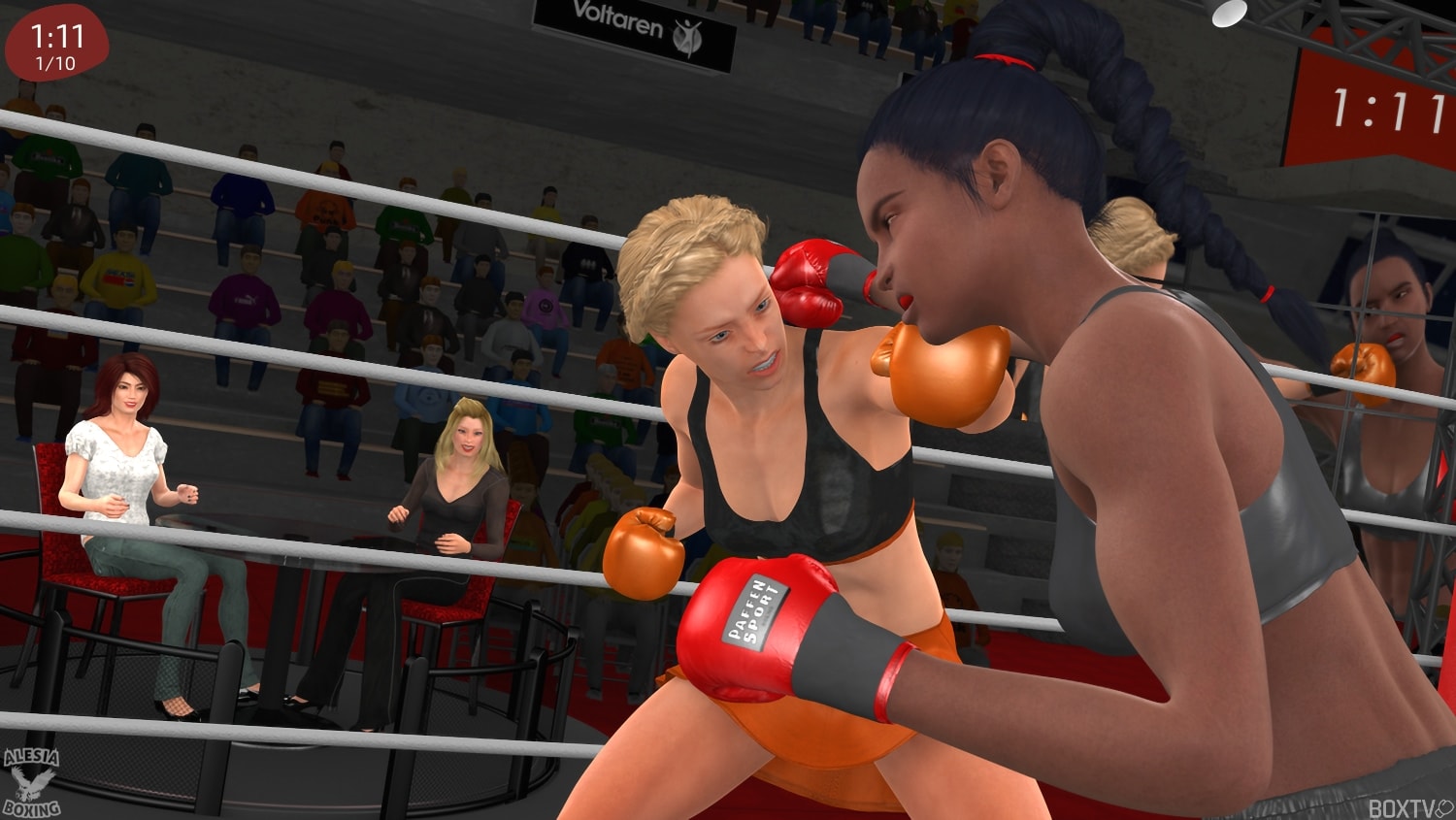 The battle continues with a few more skirmishes. In the absence of clean contact, the German makes it clear that she can stalk and threaten the Cameroonian without making herself an easy target. She comes close to scoring with power shots on several occasions. In this phase, Sophie makes the ring hers.

Elsie thinks: “Time for a little roughhousing so she can feel my strength.”

The black woman grabs her white counterpart and gets a good grip to outmuscle her and stifle the attacking momentum. Elsie keeps the upper hand in physicality until the official forces a break. 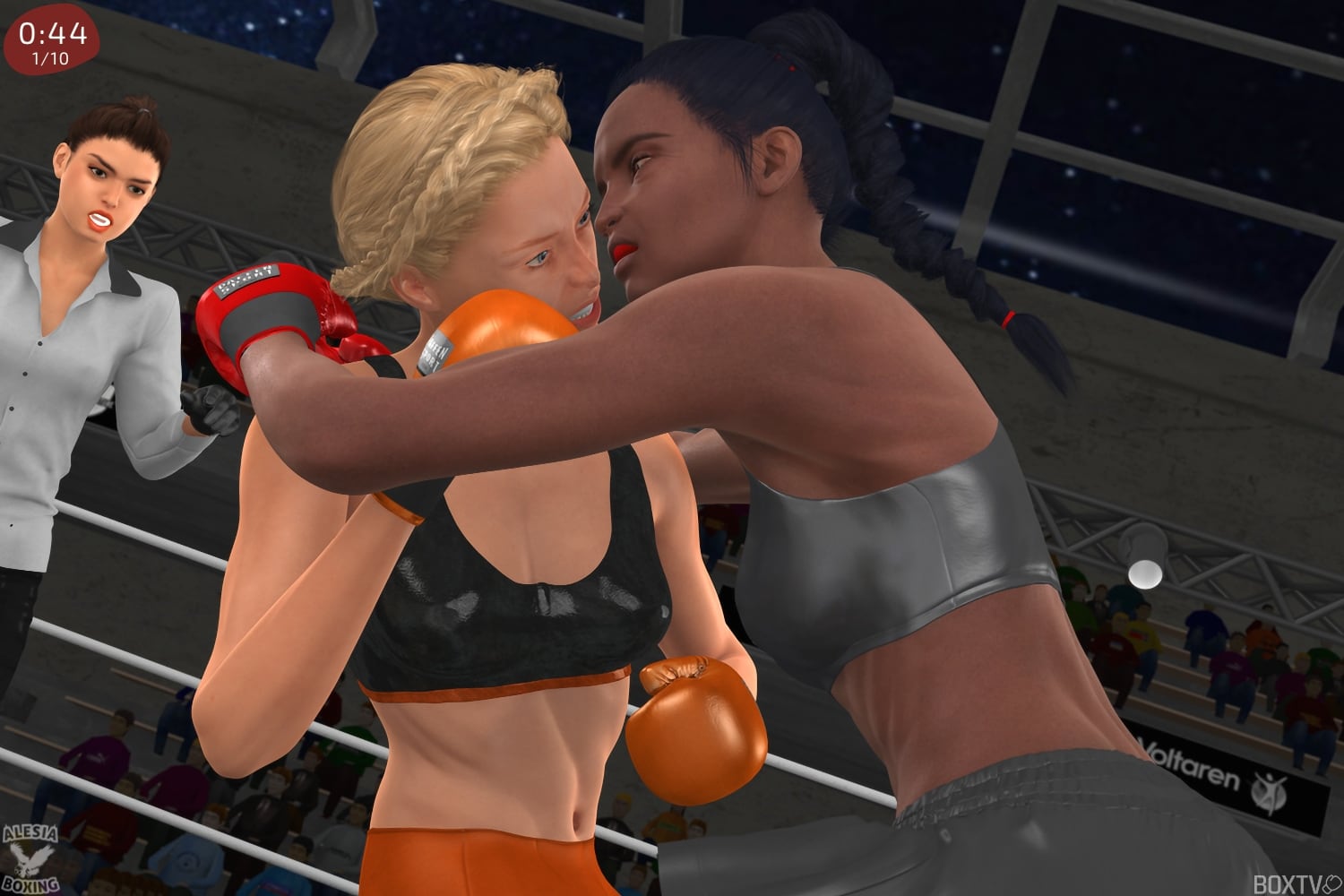 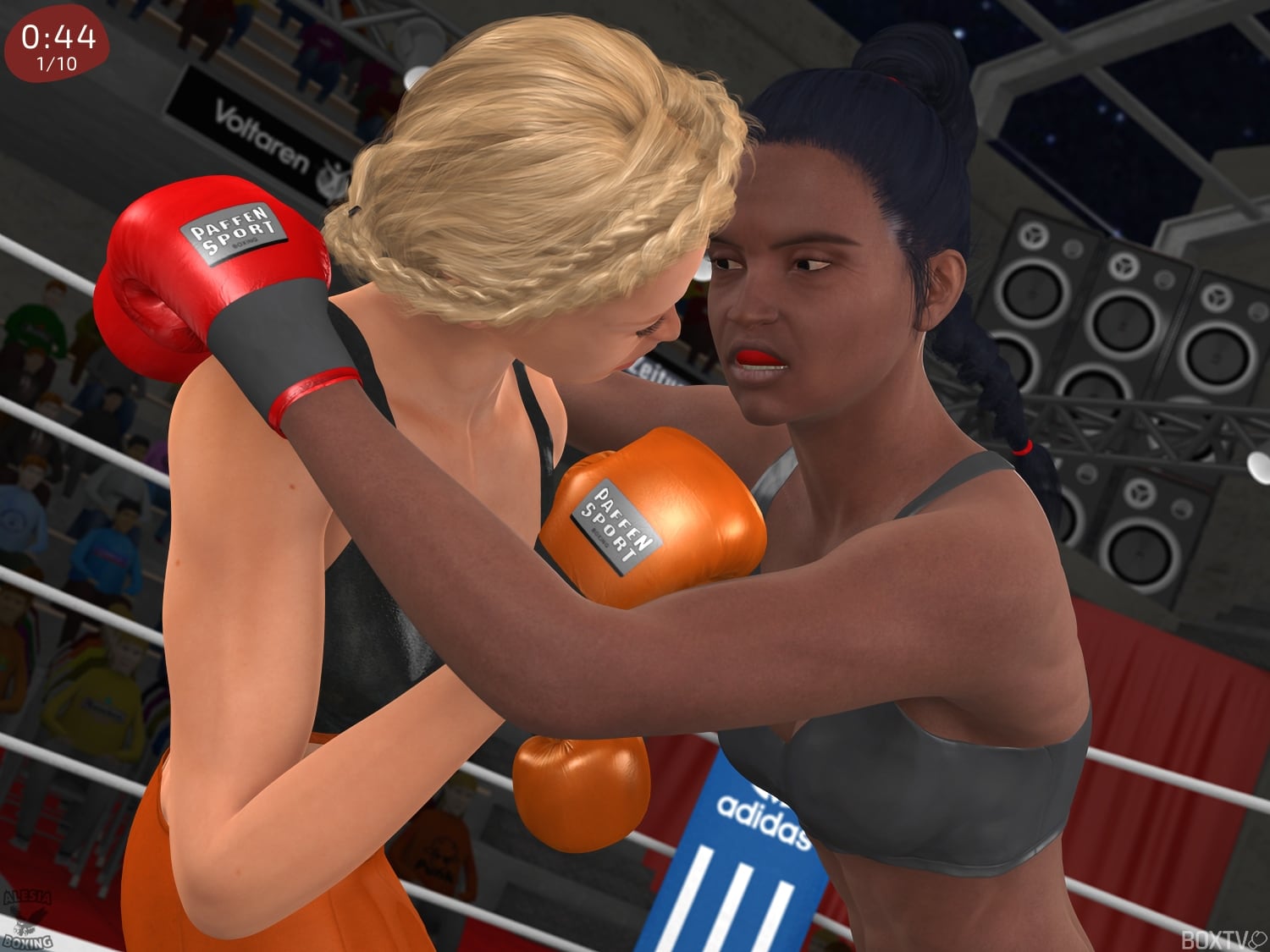 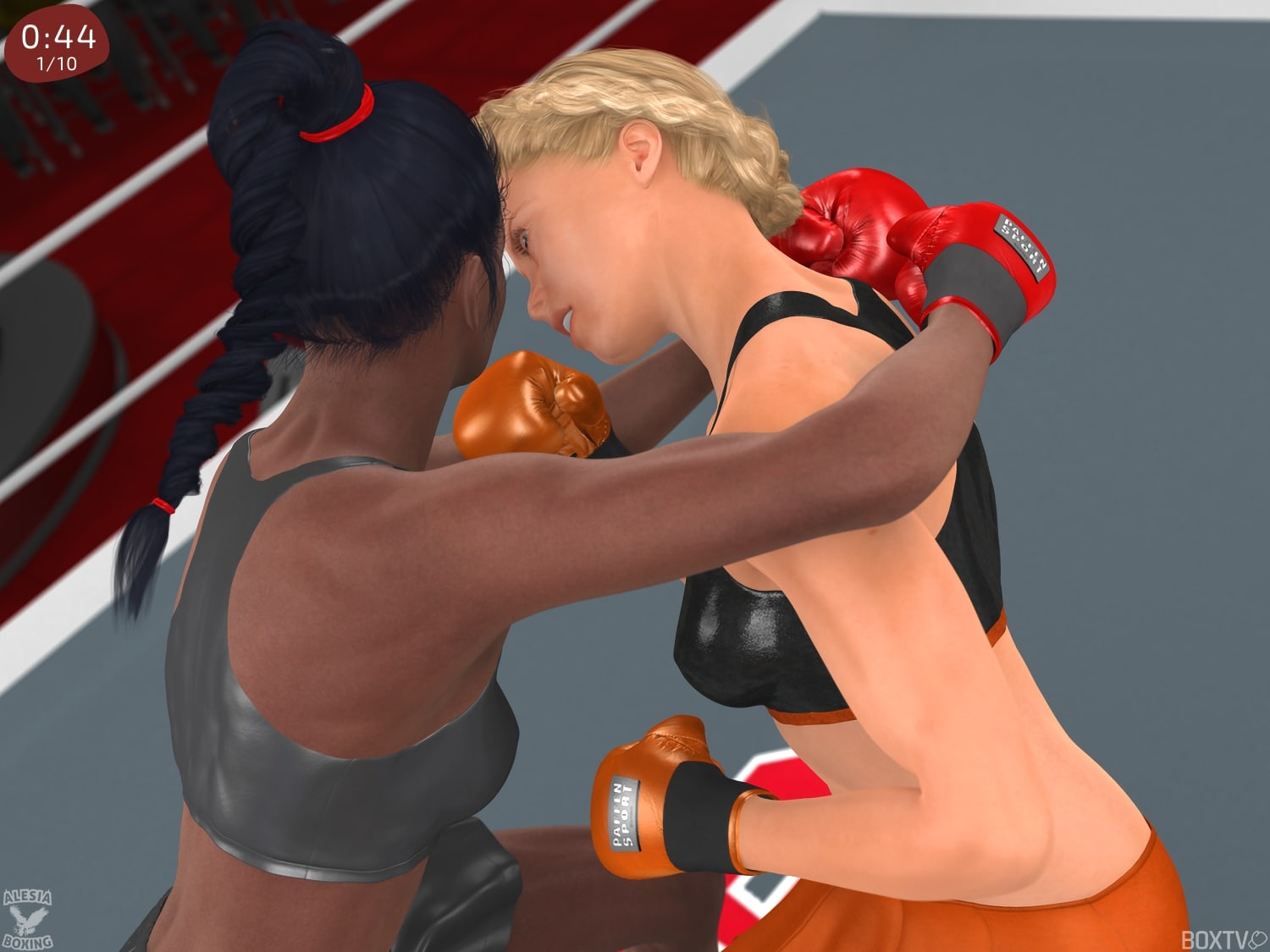 The devious little move has the intended effect. Sophie stays a little more distant to avoid getting caught by a pincer. It gives Elsie the space she needs to let her hands go. She throws flurries to keep the German away.

While most punches make little clean contact, the African gets a breakthrough with less than 20 seconds left. The blonde tries to fire back with a left hook to silence the veteran’s guns, but that turns out to be a mistake. Elsie finishes her combination with a left hook thrown a nanosecond before. She twists her torso and the red glove gives Sophie’s jaw a solid whack. Paff!

Esther: “Schumann got caught while trying to trade. The cleanest, hardest and surely the most painful punch of the round. In the Battle of the Braids, the woman with the tail may be stealing the first round. What meaning does that entail?”

Anna: “That pun made me groan. Anyway, there are still a few seconds left before we can make that assessment, but Elsie Nadege’s pedigree makes this contest inevitably more difficult than any other that Schumann had in the past.” 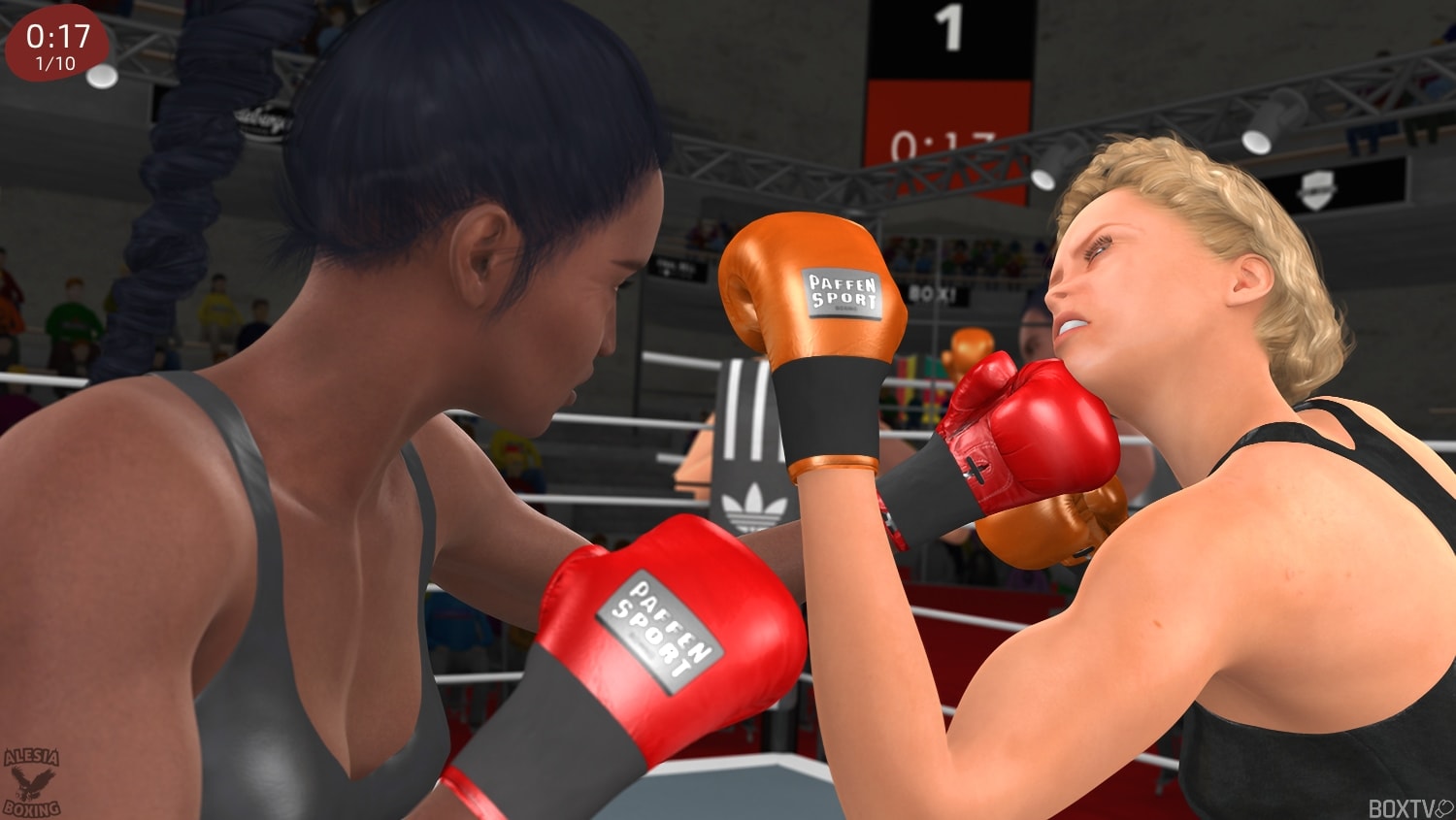 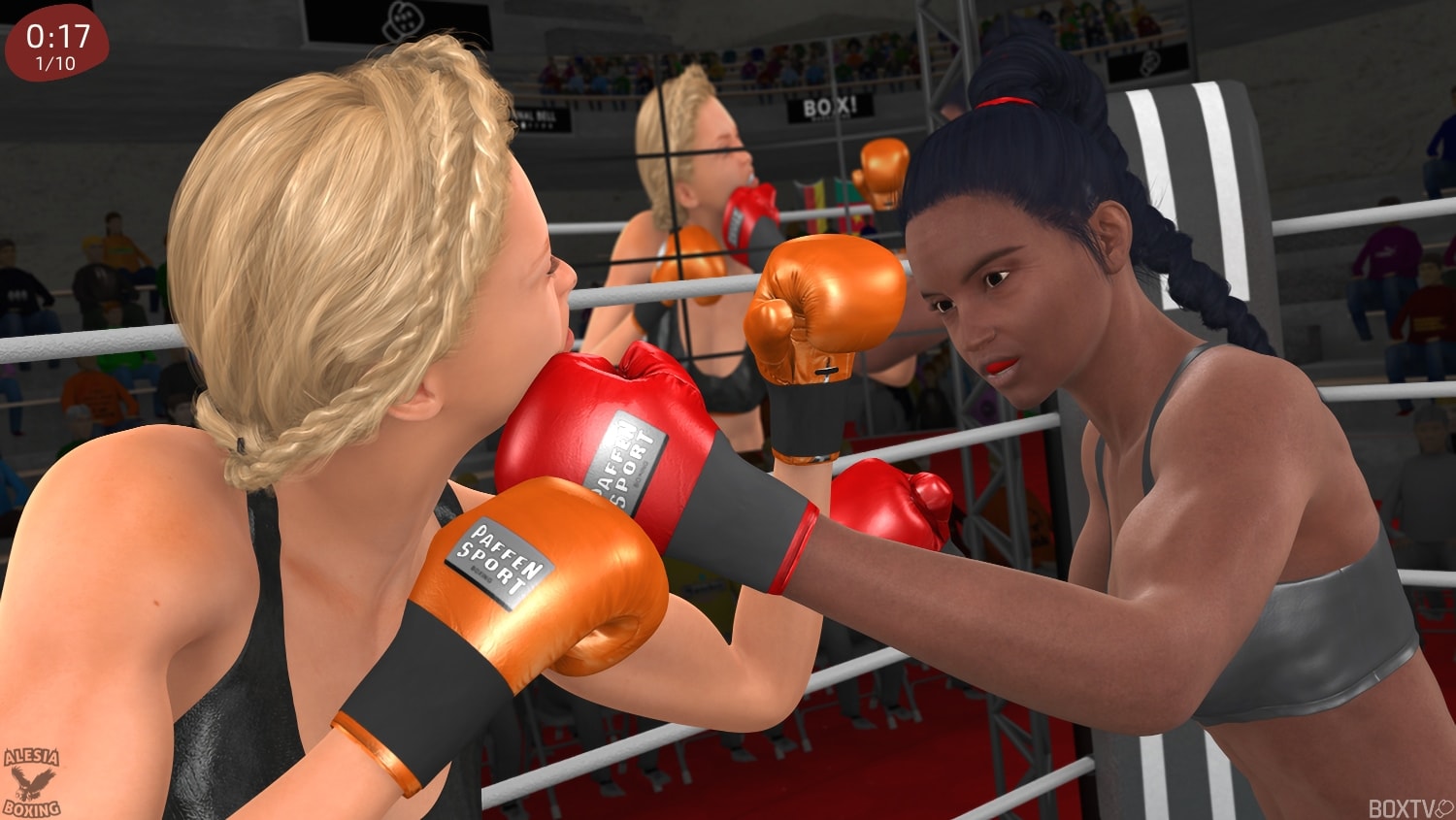 Elsie takes back the initiative to fully clinch the round. At a rate of three to four punches thrown every second, some of them landing partly, she drives Sophie back near the red corner.

What happens next is exactly when happened previously. When Picasso has to defend herself by hitting back, the woman wearing a shiny gray outfit takes the opening and cracks her on the chin, this time with a fast straight right. Pish!

Esther: “As hinted seconds ago, Nadege is taking the first round with relentless punching. What a skilled boxer she is.”

Anna: “That’s true. It’s the first time I have seen anyone winning an opening pro round against Sophie, who never likes dropping even a single round in a fight. She has high standards, and I don’t expect her to be pleased.” 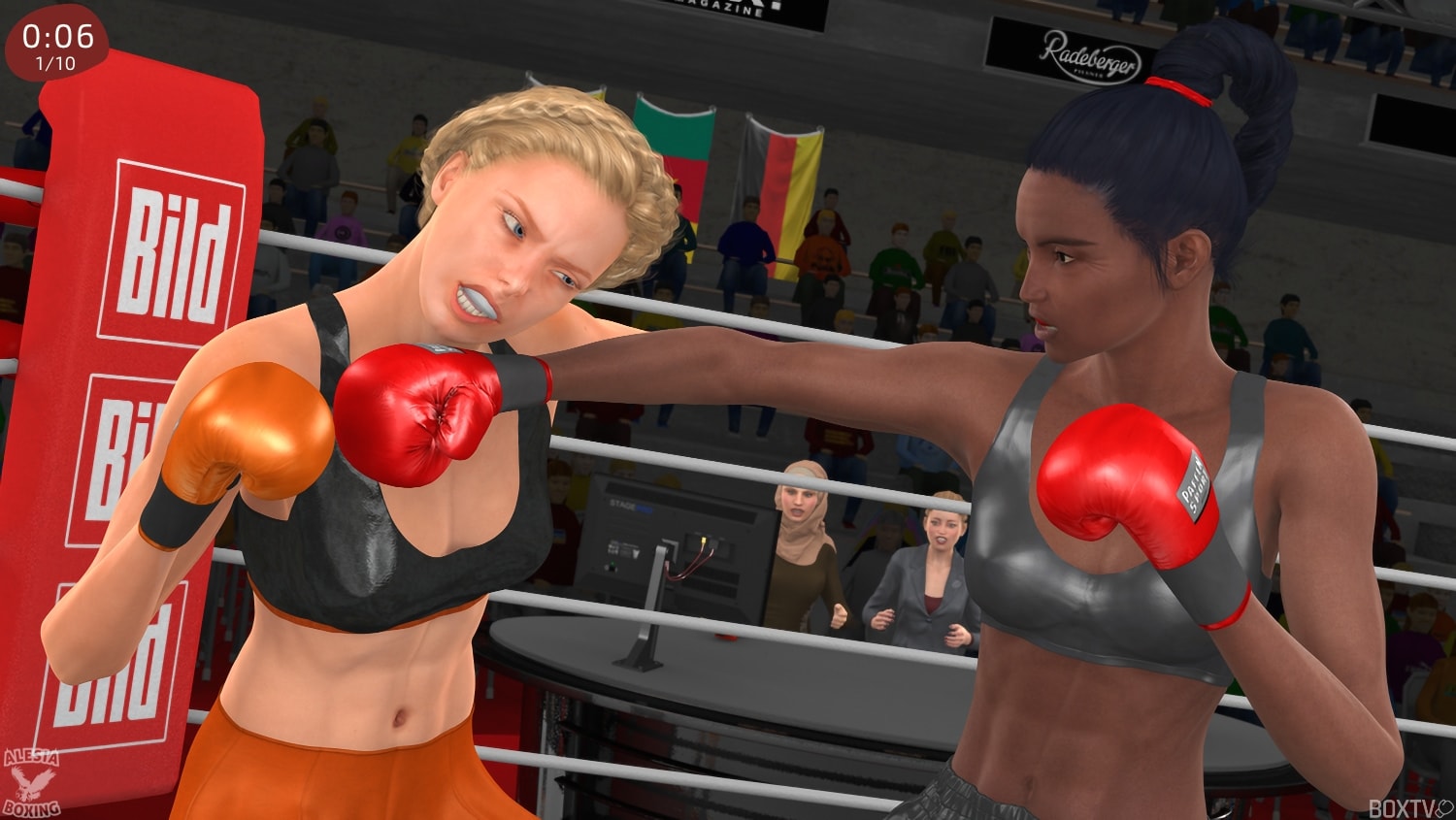 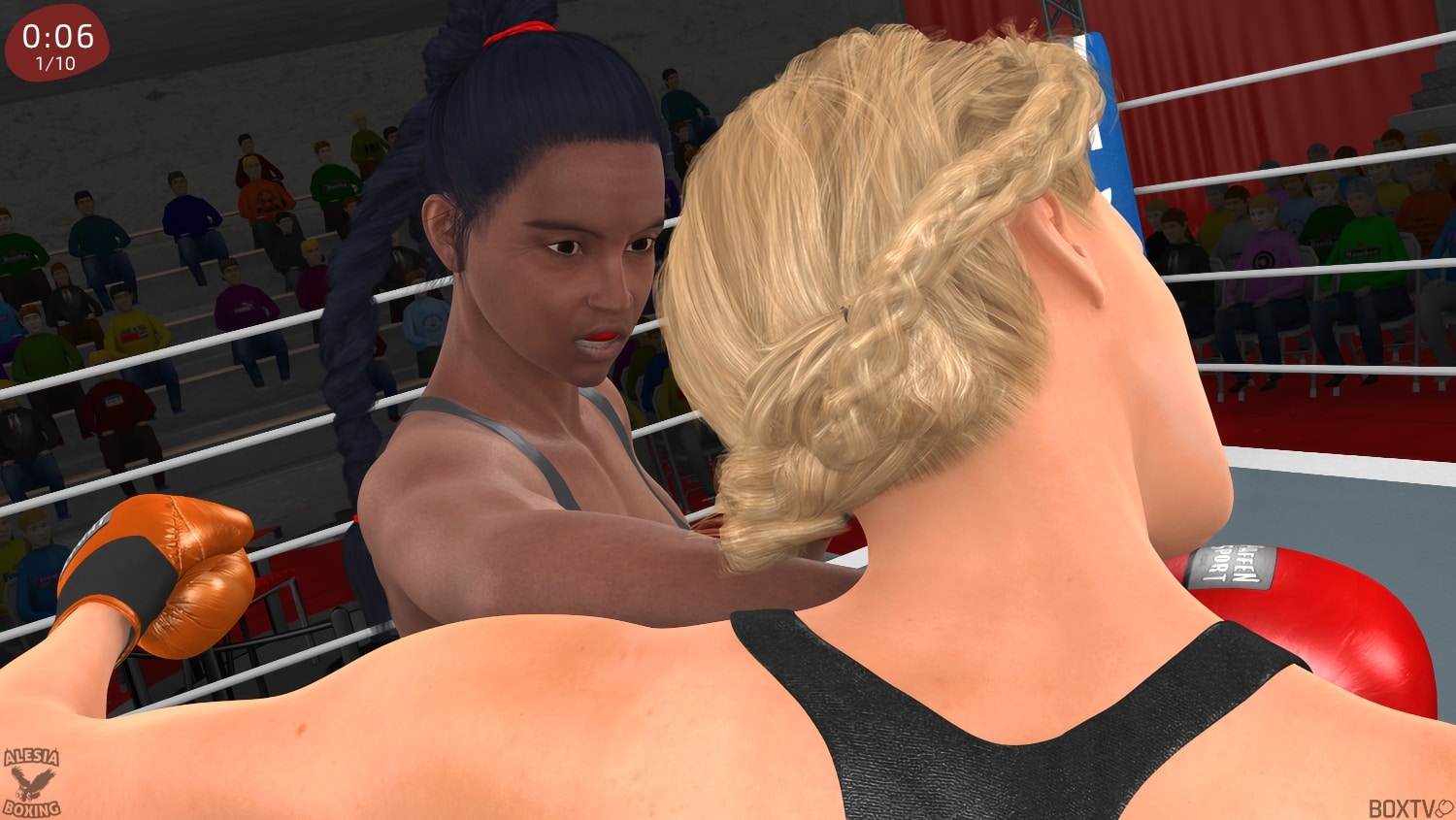 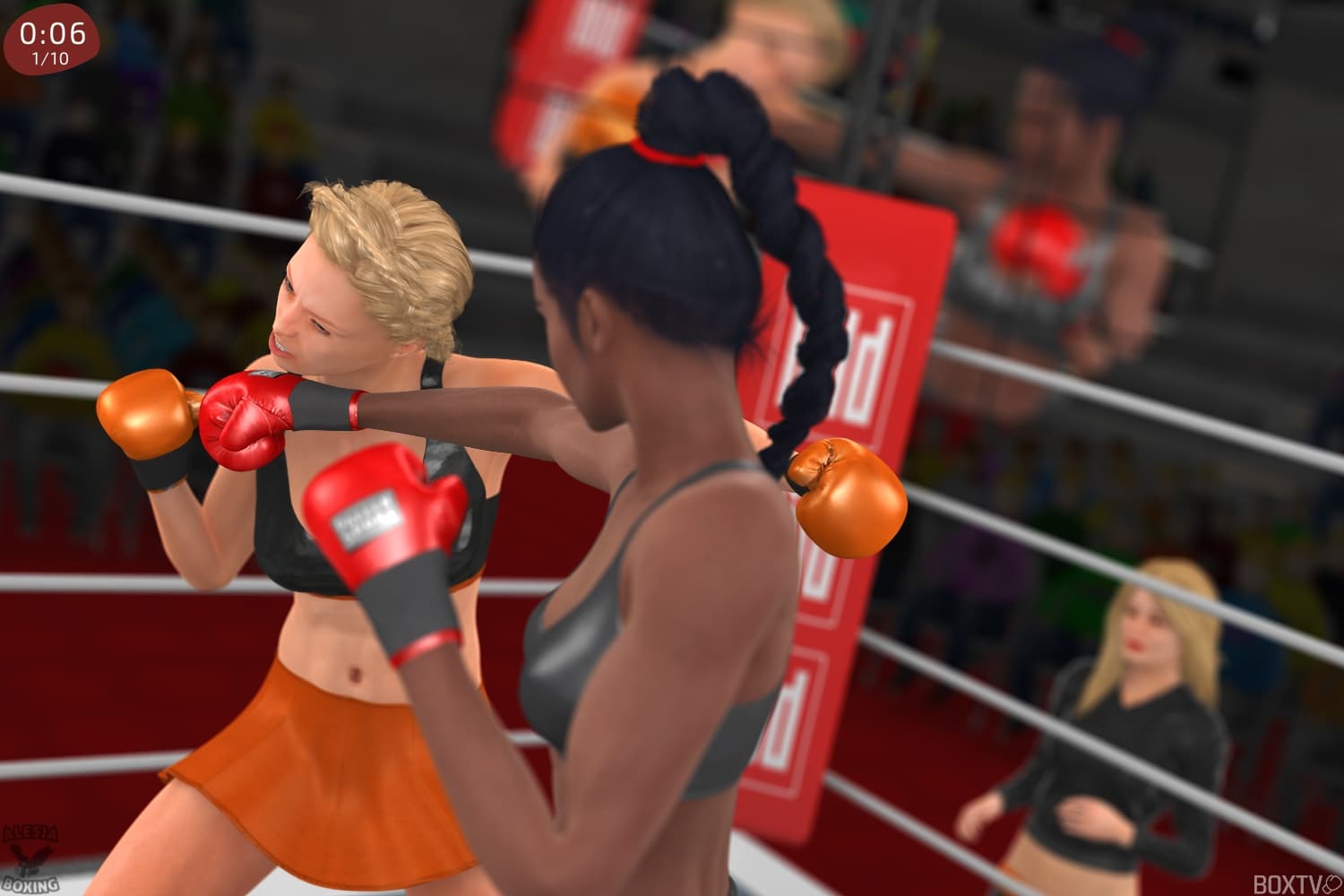 A couple of trades later, the bell rings and the contestants get back to their corners.

As predicted, the German is not happy but Regina signals that she must remain calm.

Sophie: “She doesn’t respect me.”

Regina: “Get used to it. You never get any of that from the Top 5. Now, we need to make an important shift in patterns. We’ve worked a lot on your defense and we need it now. This girl will always throw more punches than you do, and how you react is essential.”

Regina: “Parry and dodge. Find the timing to hit back when you’re in a good position. The only way to earn her respect is to make her feel the pain, and we know you can dish it out.”

Regina: “I want you that this isn’t easy, but I know you can do this. You have the skills.”

Clifford: “Good round. Unless the judges are super biased, you took this round.”

Clifford: “There are still nine rounds left in this fight and I don’t want you to become careless at any point. That blonde in the other corner is a little tank. It doesn’t take her much to hurt someone. One punch is usually enough. Stay focused, keep throwing shots to keep her busy and don’t get too close.”

Anna: “I make this a 10-9 round for Elsie Nadege on my card. If you are a fan of Sophie Schumann, you shouldn’t be overly worried but the London-based African knows what she’s doing in a boxing ring. It’s a bigger challenge than at any point for the talented Bavarian.” 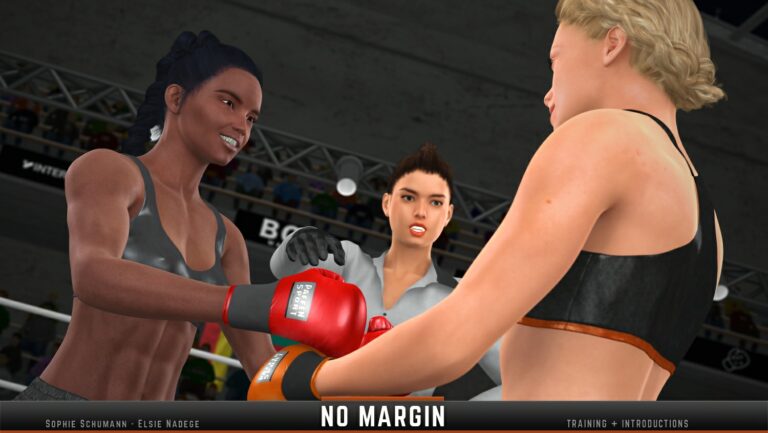 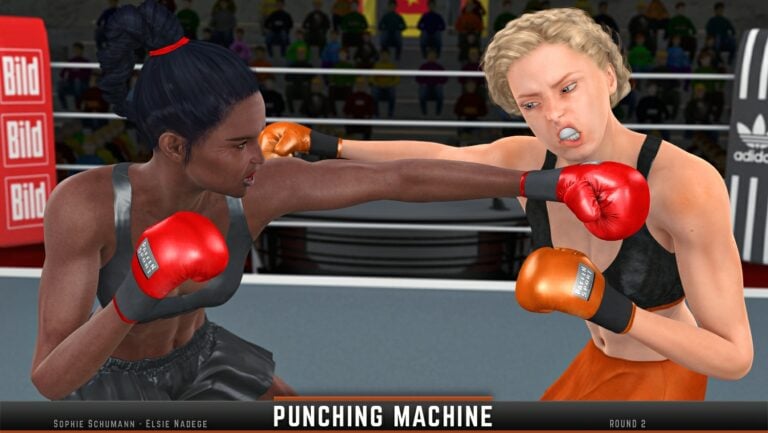