The bell rings and Round 4 can begin between Sophie Schumann and Elsie Nadege in Munich. Three rounds down, Picasso knows there is no margin of error. She must get back into the fight.

Elsie is more relaxed. She feels “in the zone”. As soon as the contestants are reunited in the middle of the ring, the black woman goes back to work. She makes the first minute and a half a complicated affair with many punches thrown, with high volume and varying speed.

Sophie finds herself on the defensive more often than she would like, shackled by the torrent of red leather coming at her. She defends to prevent clean shots from landing, but that’s hardly going to help her win the fight. She needs to pummel her opponent to gain her respect, not just avoid the pain.

With half of the round gone, Elsie still has the momentum. She swings a left to the body. The blonde steps to the right and lowers her left elbow to block it effectively before ducking under the right cross that follows, before getting out of there.

Sophie thinks: “When am I going to get a break here?” 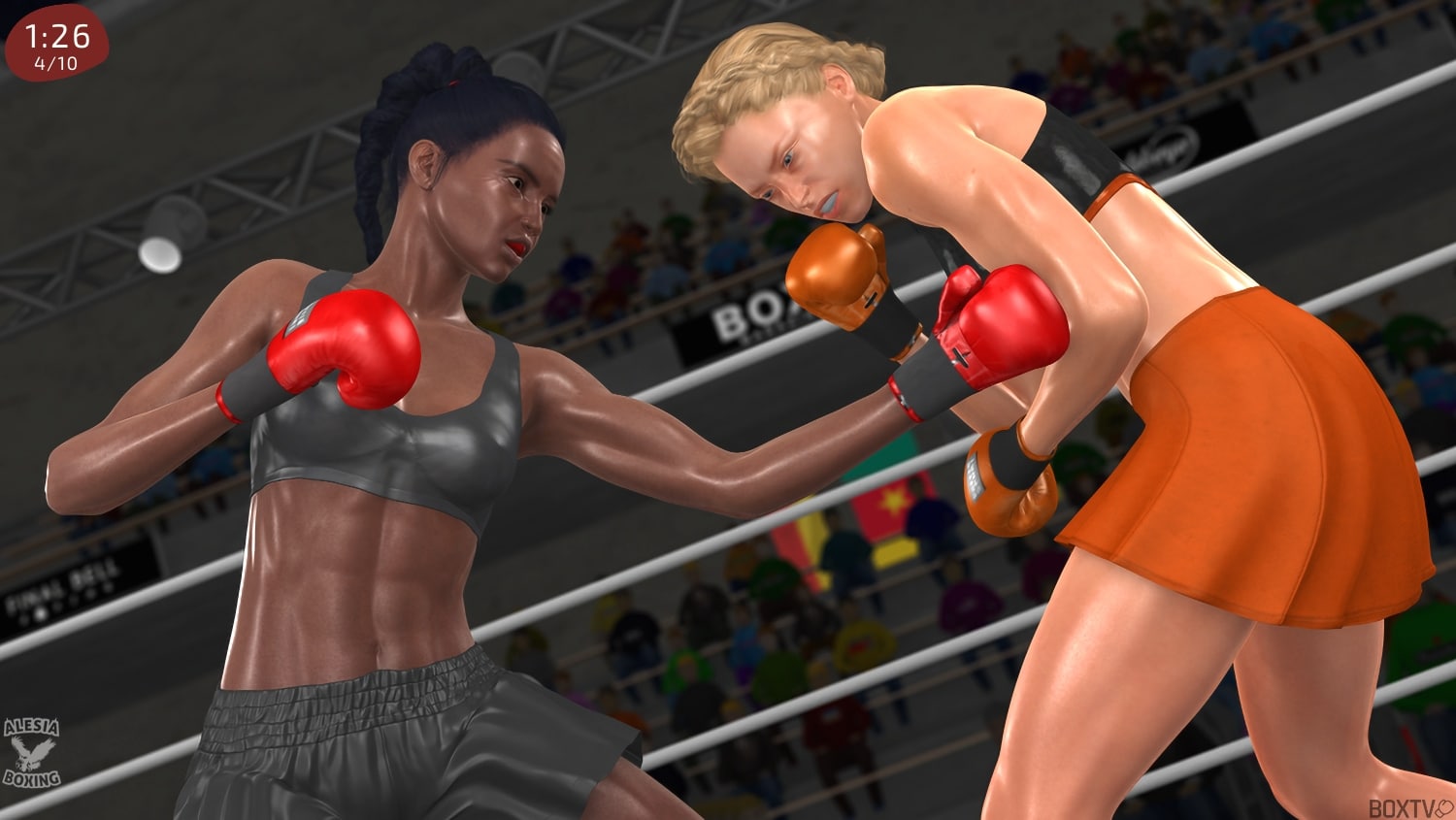 That break doesn’t come. The veteran is steady and always keeping her under offensive pressure. It’s a sink or swim situation against a boxer who is a natural at this game, and it looks very much like the African chewed on some extra-long lasting energy bars all day long before this fight.

Sophie has two choices. Either she gets discouraged and gives up, or she attempts standing her ground against such a seasoned competitor. If you know her, you know what she’ll vote for. Win or lose, quitting is not an option for a Schumann sister.

With just over a minute left in the round, Elsie launches another lengthy combination and the German fires back with shots of her own. The young contender’s overhand left hook scores but it’s the Cameroonian’s right cross underneath that does the most damage. It lands cleaner, with knuckles thrusted in Sophie’s jaw.

Esther: “Nadege is the colourful version of the Energizer bunny. She simply never stops punching and Schumann’s problem remains whole in this fourth round. There seems to be no simple solution in sight.”

Anna: “It’s an impressive display of pugilism from a woman many thought was on the decline. It turns out that she’s rolling back the years, or showing she never lost a step.” 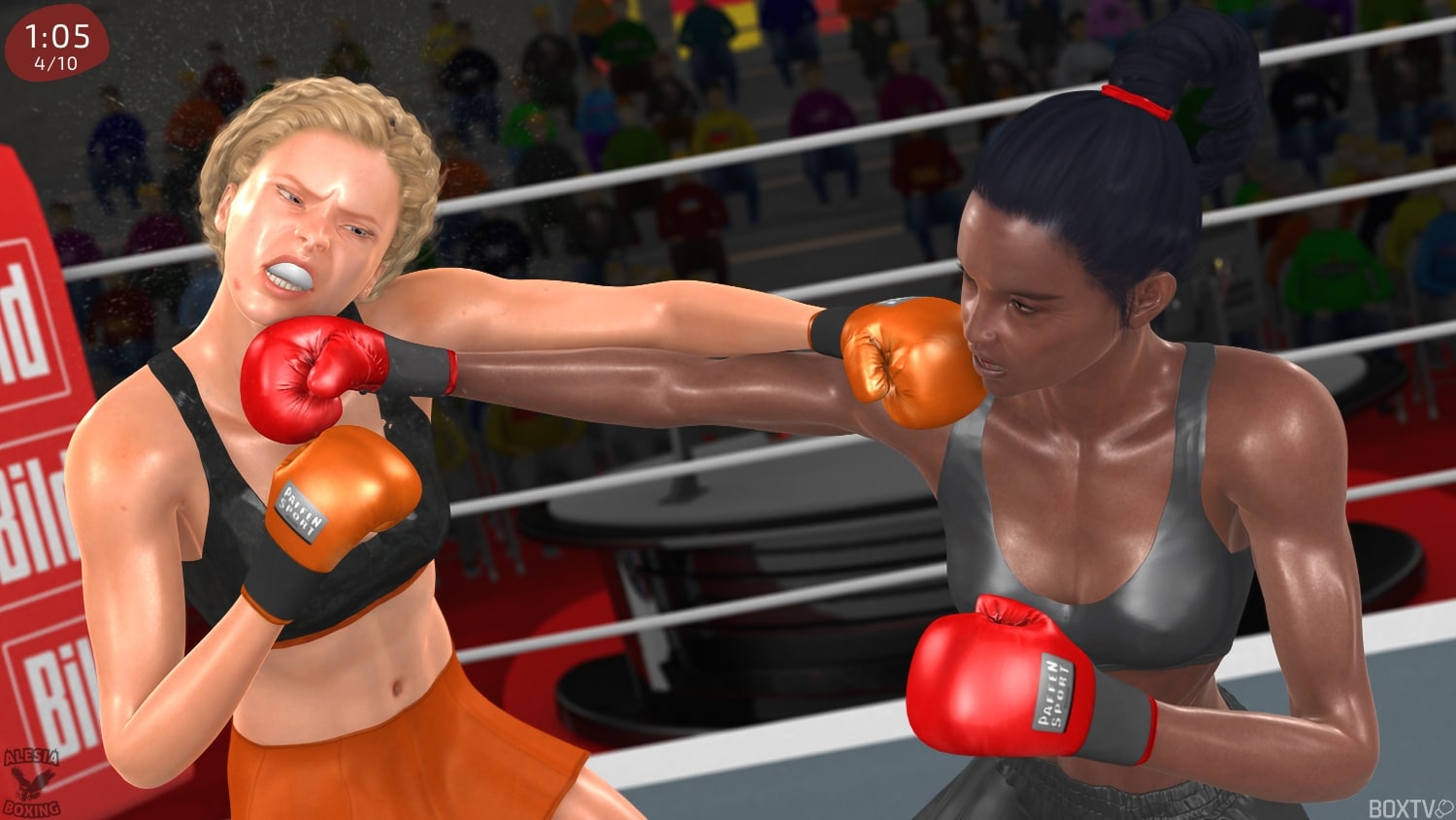 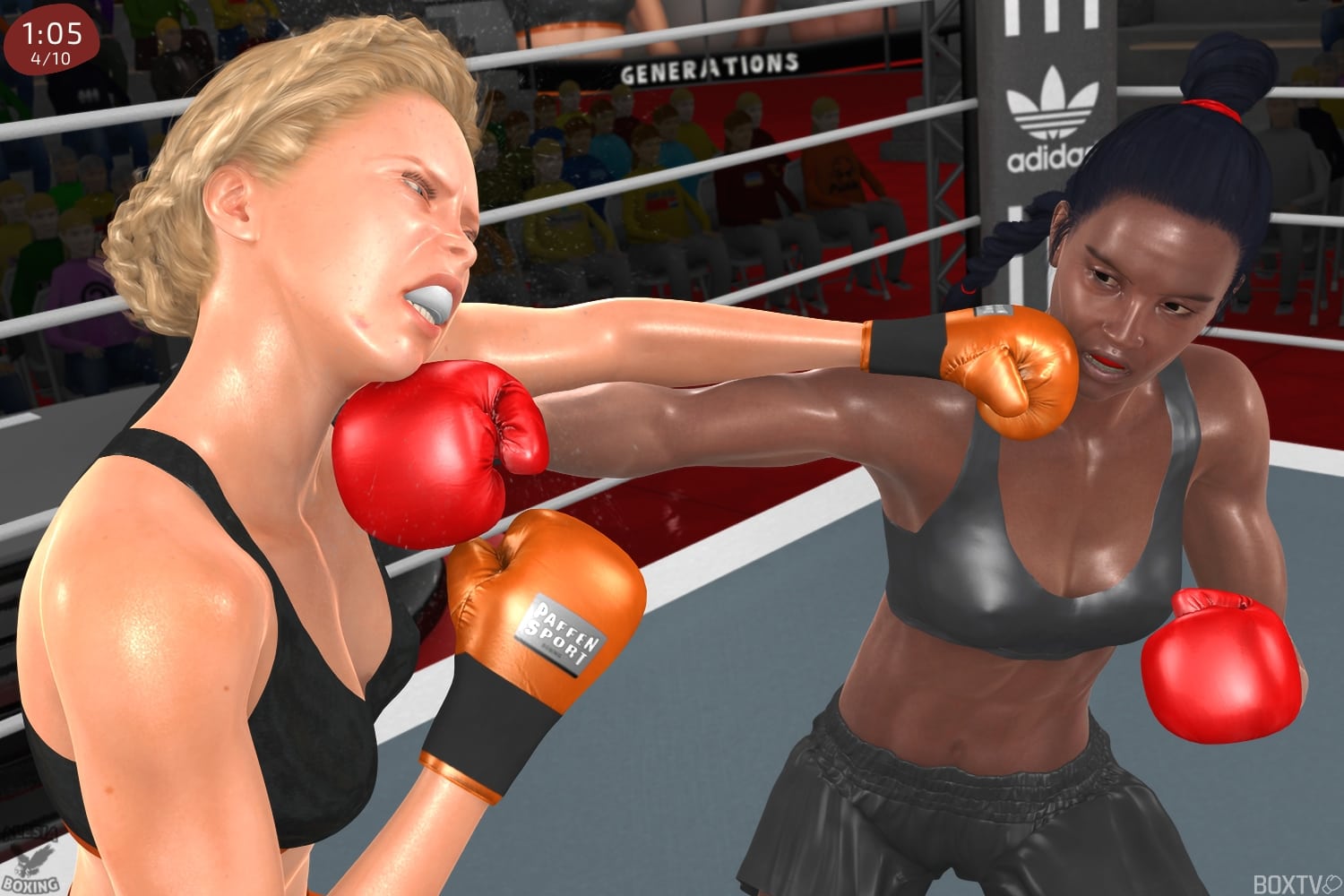 Elsie sees that Picasso is shaken after taking that head-swivelling right hand, and she stalks her around the ring while throwing even more combos. The German does spend a few seconds trying to evade, and there’s one problem that one of the broadcasters is about to notice.

Esther: “Schumann is hurt again! What do you think, Anna?”

Anna: “I think that this fight is seconds away from a stoppage. Observe the body language. Sophie is there mentally and she wants to fight, but her body can’t do it anymore after taking that right hand, so she isn’t throwing punches back. I believe that Elsie broke her physical resistance and that Rebecca Linden won’t allow that to continue for long.”

Indeed, Sophie is trying to escape instead of hitting back. That’s the perfect recipe to get cornered when a pressure fighter keeps coming at you. Caught in tight space with her opponent, Sophie can only watch as Elsie throws a powerful right cross that lands flush in the middle of her face, knocking her back by a couple of inches, making her back hit the corner pad.

The crowd gasps. Akane and Alesia have no words.

Elsie thinks: “Come on, ref, stop this. I’m winning and I don’t want to damage this girl more.” 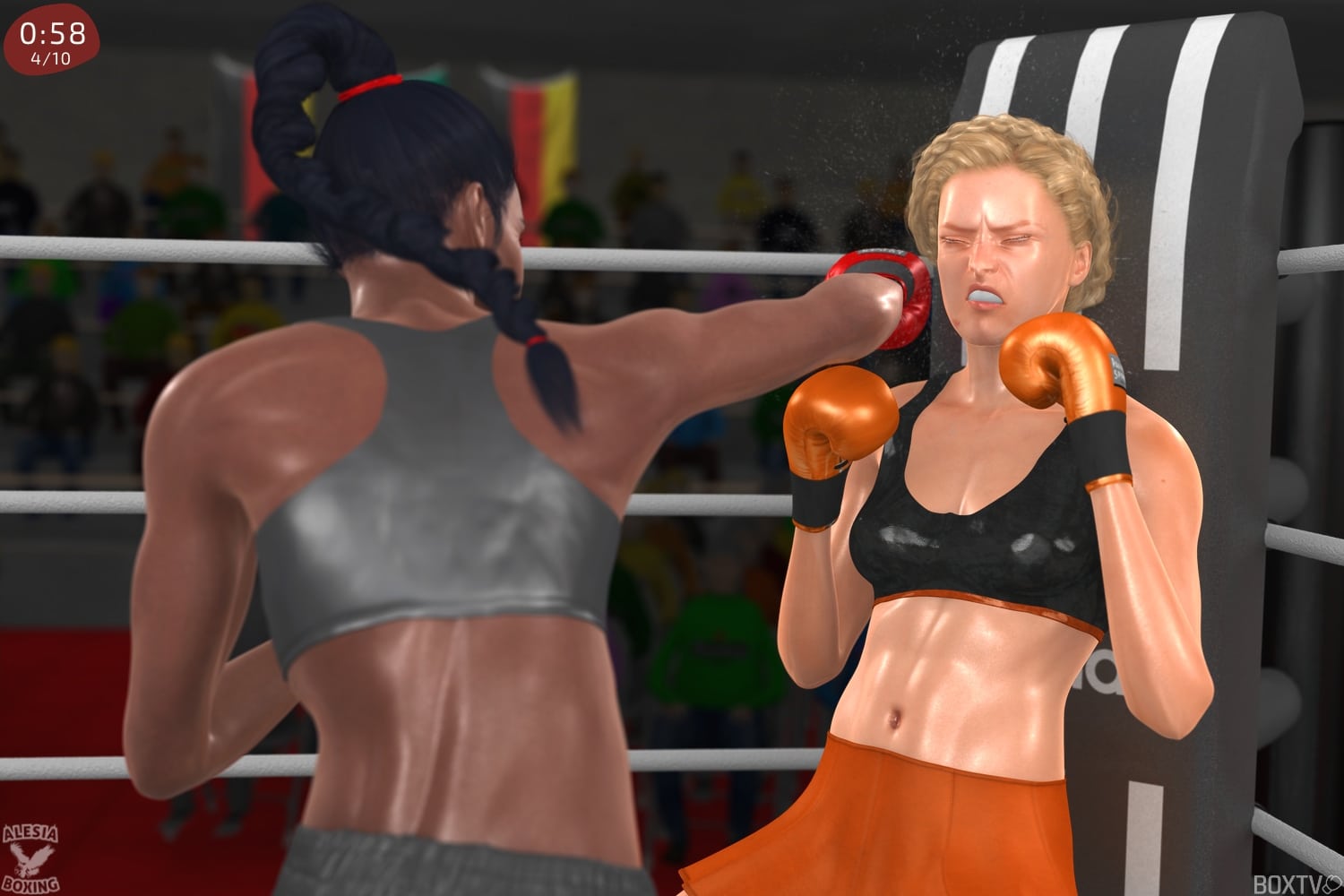 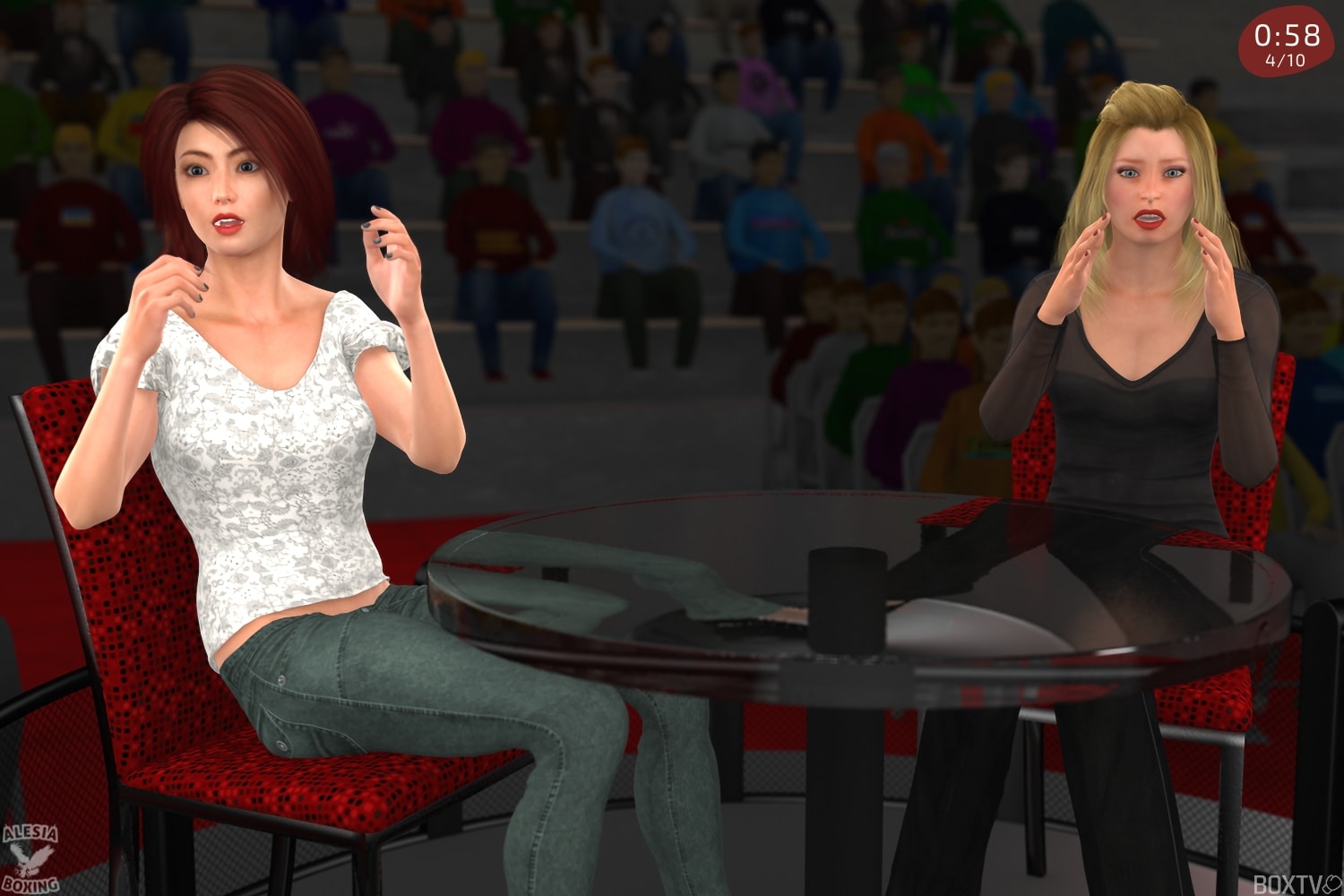 Rebecca thinks: “Enough. I’m protecting her career. She doesn’t deserve more of this.”

The German official starts moving to put herself between the fighters. Elsie steps back as soon as she sees the the ref closing in.

Esther: “It’s game over. Sophie Schumann gets stopped in Round 4 by Elsie Nadege, who put together a masterful performance in Munich tonight. Instead of a crowning moment for the young prodigy, we witnessed a shocking defeat.”

Anna: “It’s a surprise since the matchmaking was made to provide her a high-profile win, but not if you consider the credibility and quality of Nadege. A top Lightweight is reborn tonight after having fought at the highest level in years.” 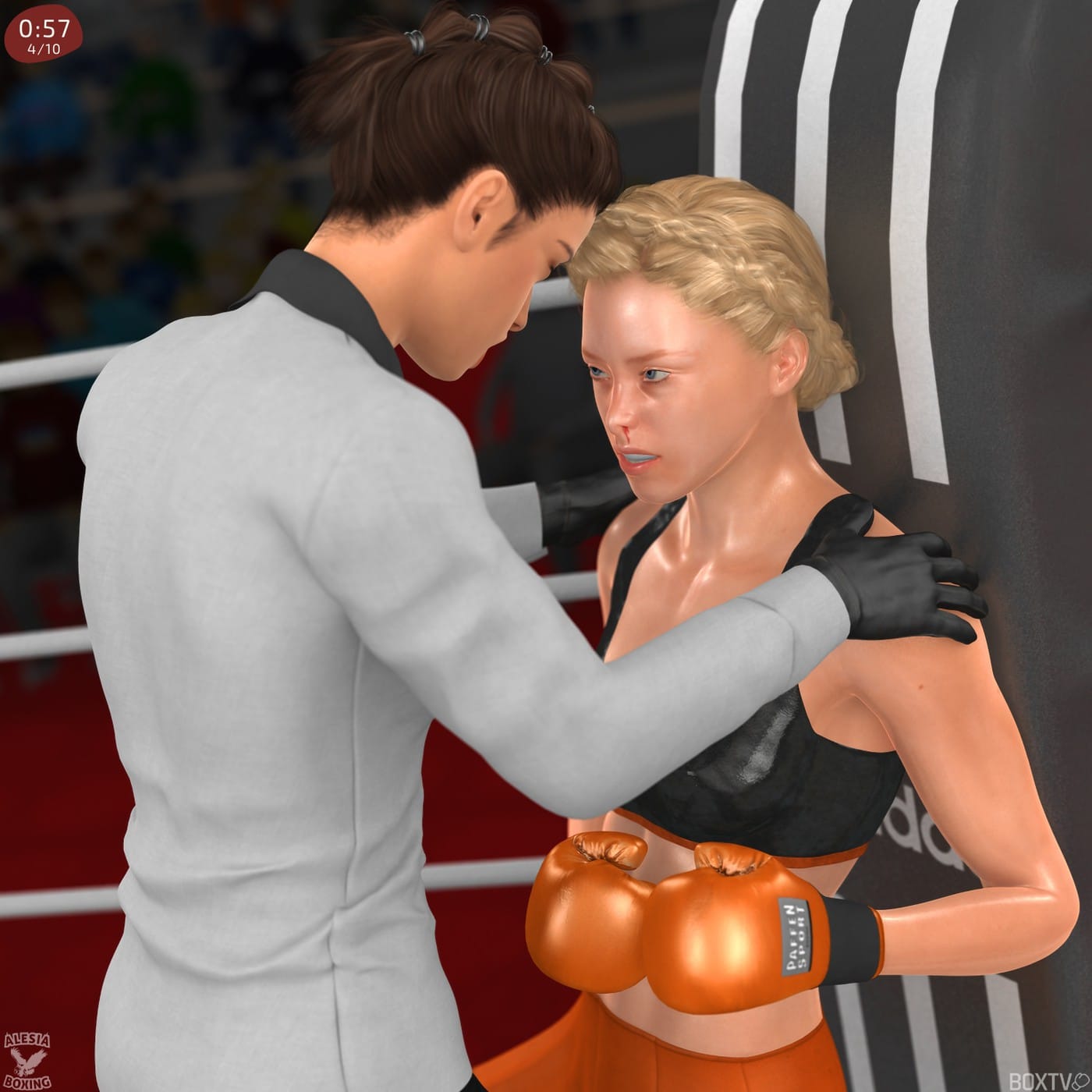 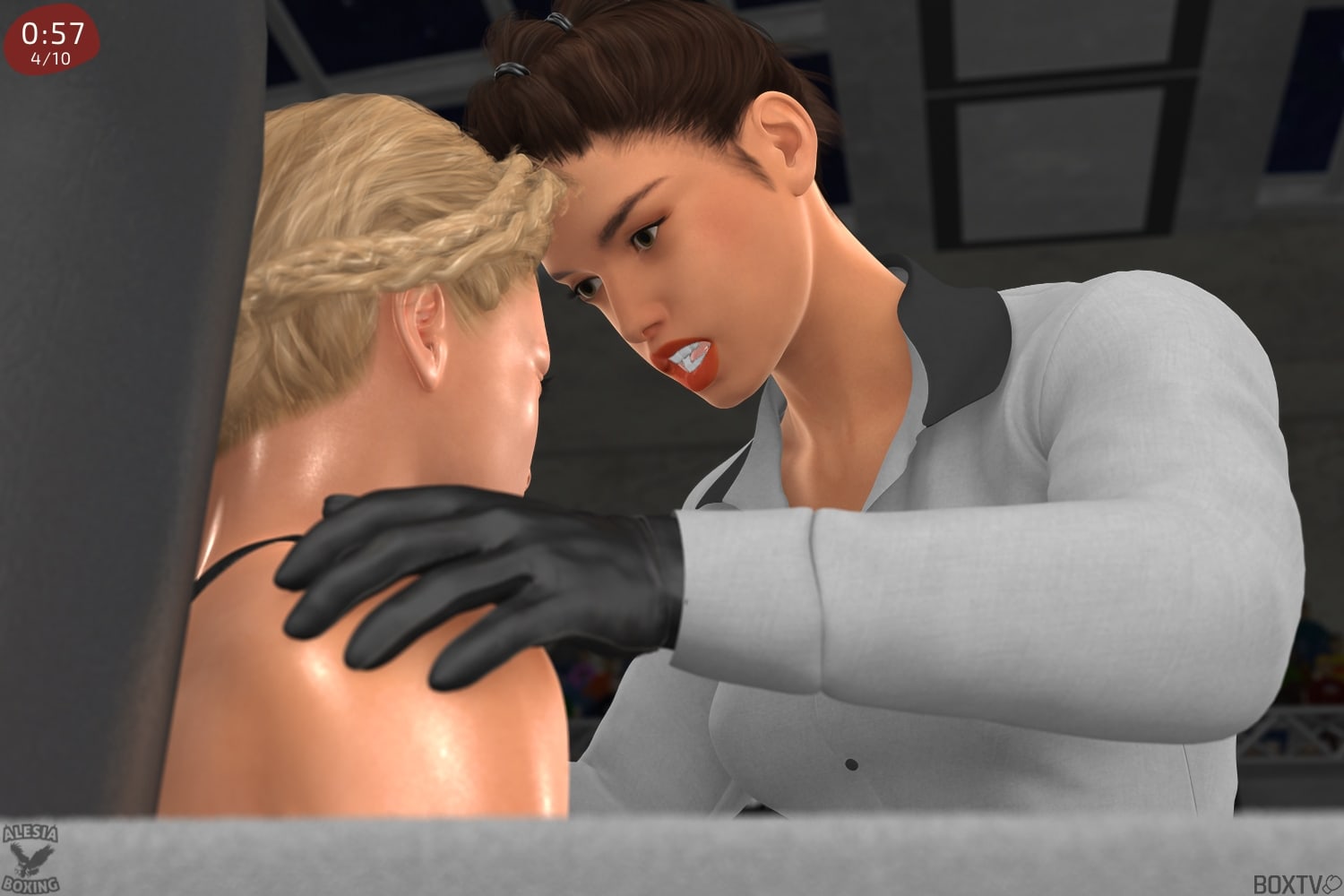 Veronica: “At 0:57 in the fourth round, we have a winner. By TKO after a brilliant display of fighting…. from Cameroon, Elsie ‘Your Highness’ Nadege!”

The pro-Schumann crowd is clearly not getting the win it wanted, but it still offers Elsie a generous round of applause. She earned this win.

Rebecca: “Congrats, girl. That was solid.” 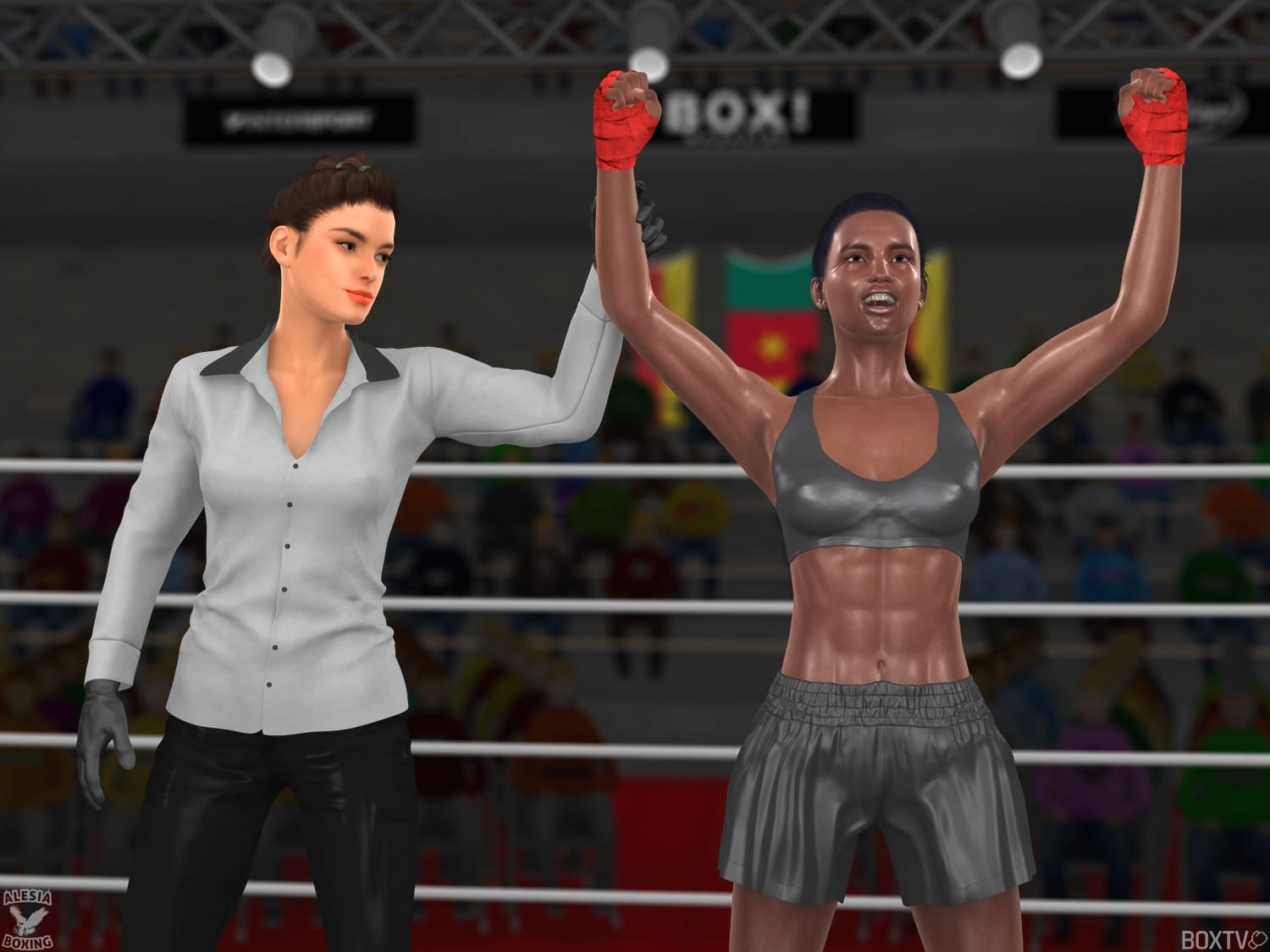 Esther gets into the ring for the post-match interviews.

Esther: “Congratulations Elsie. That was convincing. Did you get here with a chip on your shoulder?”

Elsie: “Kind of. When you’re 36 and you get a match against a prospect, you know what the businesspeople of boxing are going after. You’ve got a name, they give you a payday, and they want to see their youngster climb up. I knew I had to deliver a strong performance tonight and I did it. I’m very happy.”

Esther: “It looks to me like this fight went exactly as you planned.”

Elsie: “Yes and no. I fought my way and got the result I wanted. However, I credit Sophie for boxing intelligently. Had she not, this would have ended much faster. If you watch this match on a replay later, look at a few things. She made adjustments, showed defensive skills and hit me with very hard punches in the third round.”

Esther: “It’s always easy to be kind after a win, though. Many observers will probably say that Schumann wasn’t ready for this level.”

Elsie: “This was my night, but I also think that Sophie has a great future and I’ll watch with interest as she grows. Look, she’s 23 and she has yet to hit her prime. This was her fifth fight. I’m part of the present and she’s the future. I mean every word. To be fair, this fight came a little early for her.”

Esther: “Do you see a rematch in that future?”

Elsie: “I honestly don’t know. I believe that this match puts me back in contention for the world title, where I have much more to win than in a rematch. Unless the title is on the line. Then it makes sense for both of us.”

Esther: “Do you see yourself fighting Zohana Patel once again?”

Elsie: “Do you know any top fighter who doesn’t want a title shot?” 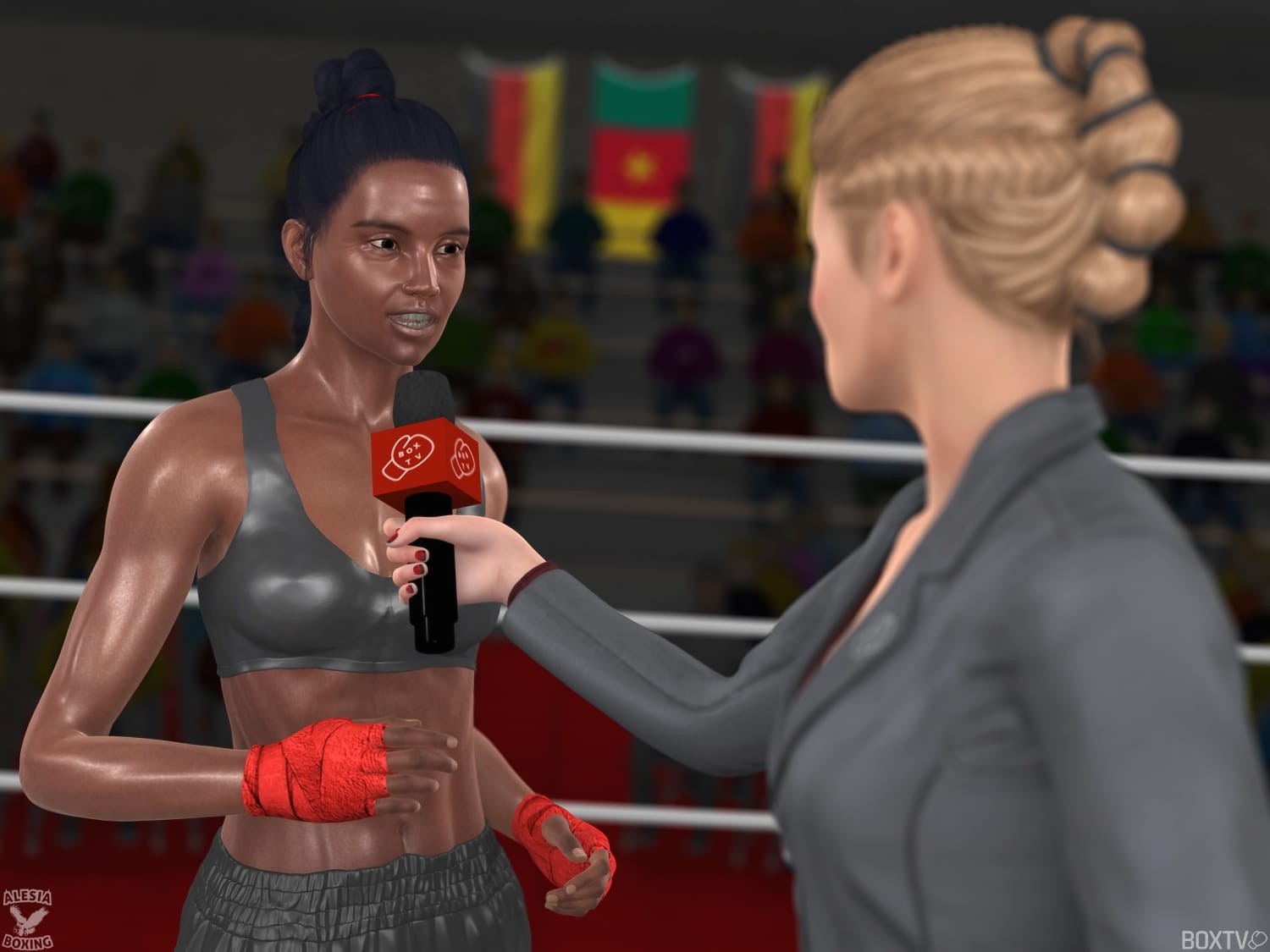 Esther: “It’s Sophie’s turn. Why do you think you lost tonight?”

Sophie: “I don’t know if I’m in much of a position to analyse after getting stuffed like that. But I mean, she killed my power game. I was ready to be patient to create my moment, but it never came. She threw so many punches that I never got going. I’m not happy to get stopped, but look at how she fought. I can’t take credit away from her.”

Esther: “Did you make mistakes tonight?”

Sophie: “Not that many, I think, except dropping my left hand in the third round. I think I showed maturity and the ability to adapt, but her hands were always in my face. All the time.”

Esther: “Do you agree with Elsie that this fight may have come too early for you?”

Sophie: “I don’t know if I have the neutrality to answer that.”

Regina: “With hindsight, yes, it came too early. It’s a different story in a year, though, because Sophie is growing very quickly as a pro boxer. She did nothing wrong today.”

Esther: “You won’t like this question, but many will draw a comparison with the loss against Chelsea Carter in London a couple of years ago. What do you say about that?”

In her San Francisco flat, the American rolls her eyes. “Not the same, you idiot.”

Sophie: “Watch the matches back-to-back and you’ll see the difference. Back then, I expected everyone to roll over and play dead after a couple of power shots. I was smarter tonight, but Elsie was too much to handle. It’s as simple as that, and I’ll get back stronger.” 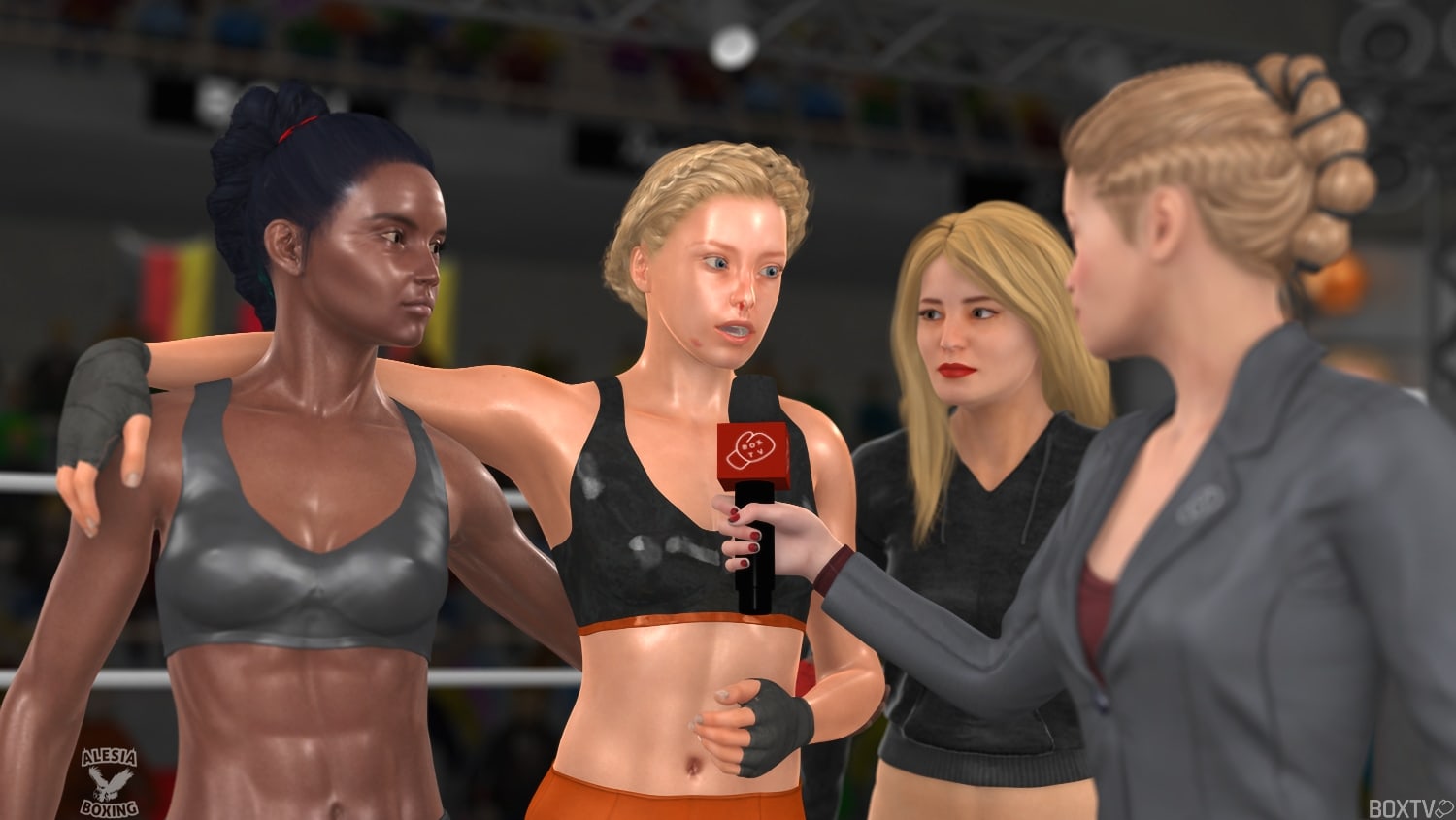 Esther: “Thank you. That’s it from us tonight at the Olympia Eishalle in Munich. See you again soon!” 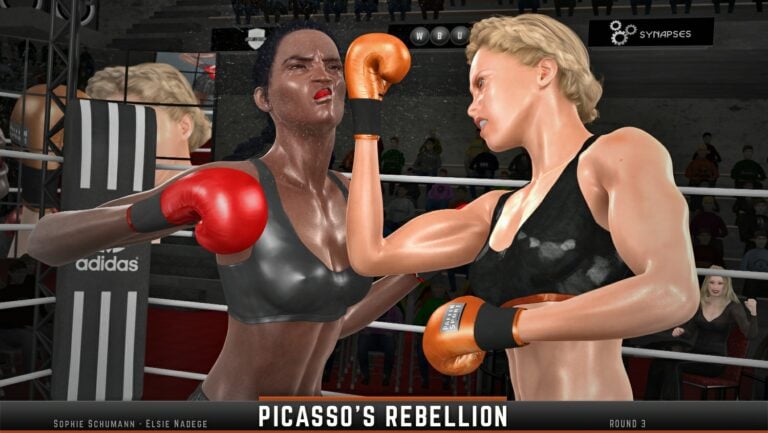