Sarita faces a test and Sophie works on rebuilding

Berlin – It’s the opening hour at a coffee shop. Sarita Waris requested a meeting with Maxim Weiß to attempt to join his gym. Will he agree to that?

They meet up at the door, order coffee and sit down at a table.

Maxim: “Not without a reason.”

They order coffee. Mocha for her. Tall filter for him.

Sarita: “Alright. I know that you probably were left unimpressed with my fight with Steffi, but I’d like a second chance at this professional boxing thing. I’m aware that you have done a great job at building and rebuilding fighters, so I’d like to work with you.”

Maxim: “I’ll be very honest from the start. I didn’t like everything I saw from you during that fight. I mean, it’s clear that you have talent and that you learned the techniques of boxing, but your fitness? It was miles and miles behind Steffi’s. Not only was she a better boxer, but had you even been equal, you’d have run out of gas anyway. That’s not how pros work.” 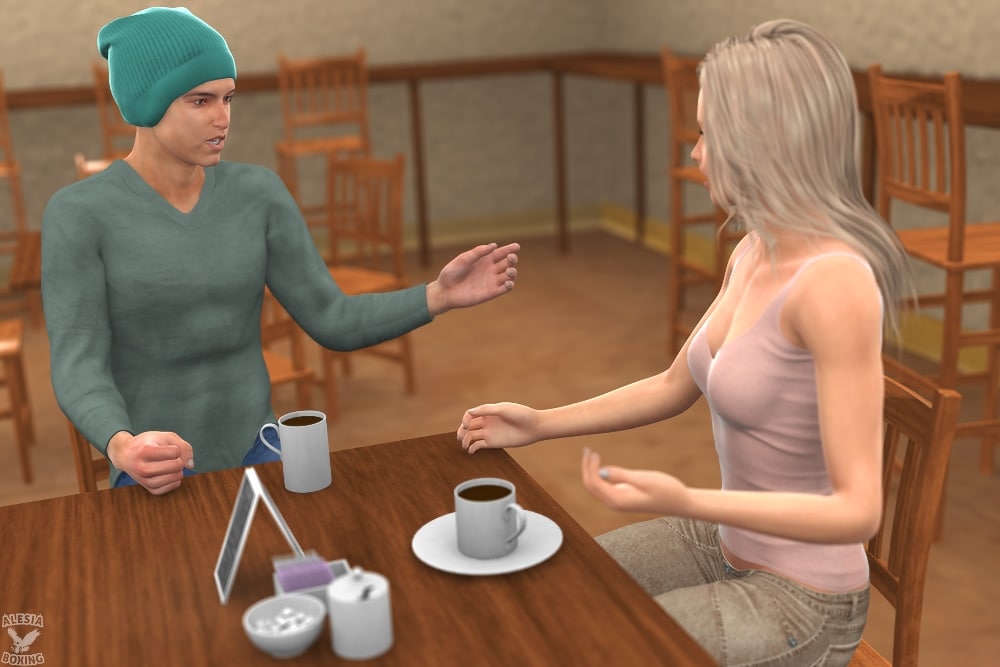 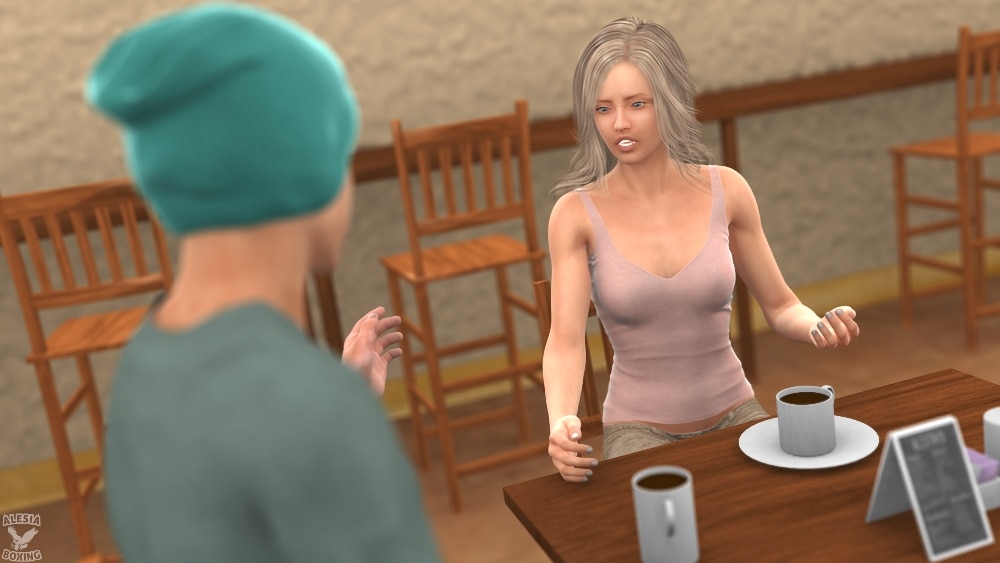 Maxim: “Let me finish. You seem to be one of those teenagers who failed to turn into adults. You got ability, and you don’t strike me as someone stupid, but I think you got lazy and arrogant. There’s no room for lazy in the boxing ring. You can have all the attitude in the world. I don’t care. The work’s gotta be done, though.”

Maxim: “You’ll have to prove it with a fitness test.”

Sarita: “You set the time, place, and the workout. I’ll do it. I’ll prove you wrong, Max.”

“Interesting, he thinks. Still feisty, but if she is true to her word, that chick’s got real potential.”

Maxim: “Later today, I’ll tell you when and where to show up. No protesting. You do everything I say.”

Sarita: “Yes. I have a question, though.”

He nods to allow it.

Sarita: “Imagine that I convince you. What about being in the gym with Steffi?

Maxim: “Well, not only is she your senior in age, but she’s also in terms of pedigree. You disparaged her and you’d have to earn her respect. That’s not negotiable.”

Sarita bristles. “I reckon that won’t be easy.”

Maxim: “She’s a hard woman who’s earned her stripes in this sport. She doesn’t owe you a thing. The good news is that she’s nice to anyone who’s on her good side, so it’s up to you to make amends.”

Days later, they meet at a basketball court not too far from the gym. This fitness test won’t be easy.

Sarita: “What are we doing?”

Maxim: “Do a little warm-up running around the room for a few minutes first. Light just to get your system ready.

For those who are unfamiliar, the beep test is an indicator of cardiovascular capacity. At the first beep, you run forward 20 meters to the “finish line” on the other side of the room, turn around and wait for the next beep.

At first, you have plenty of time to get there and be ready for the next run across the room. That time shrinks with every run, making you accelerate to make the distance. Each stage tests your cardio until you either miss time or abandon out of exhaustion. A young adult woman who runs past 10 stages is in good shape. Past 12, she is in excellent condition.

By stage 5, Sarita is working but not tired.

Maxim thinks: “She isn’t puffing. Better than when she fought. Let’s see if she can make it to at least 11.” 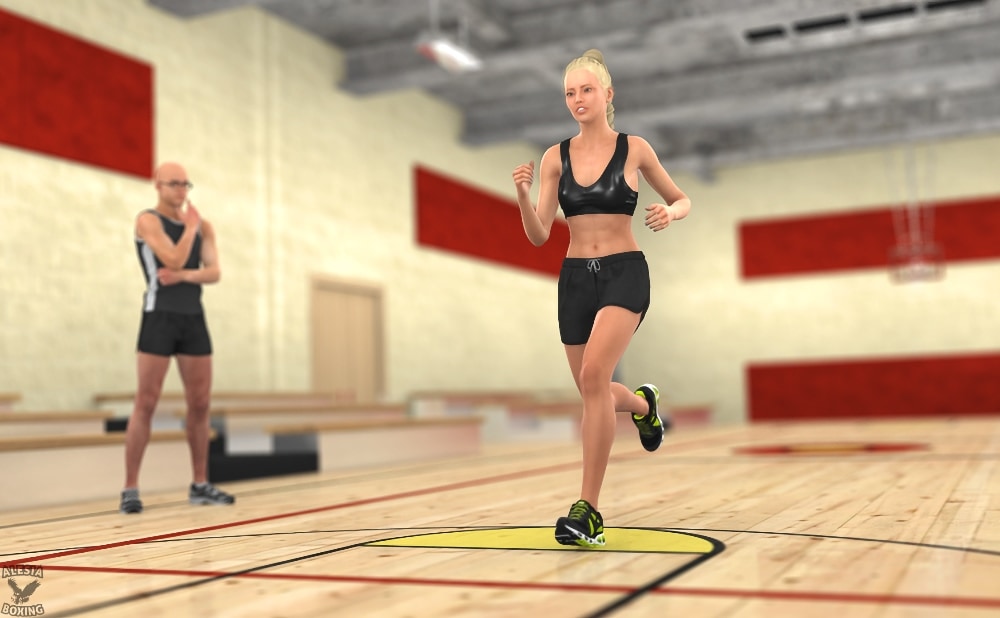 The intensity goes up, and the Finnish girl turns on the engine to keep up with the required pace at stages 8 and 9. At that point, many people who take this test start dropping out.

Fatigue is growing, but the blonde keeps digging in energy reserves. Endurance built in long runs in the past months comes in handy.

Sarita makes it past 12 and keeps going, but she runs out of gas on the last sprint to reach 13.

She makes it past the line just in time before the next beep.

Maxim: “Alright. You hit 13. Impressive. Welcome to my gym. I’m happy to train you.”

A huffing and puffing Sarita smiles but she keeps catching her breath before she can speak, making her new coach laugh.

Sarita: “Thanks. I’m happy. Give me a little time so I can move to Berlin. Can you get me papers for a work permit?”

Maxim: “Yeah. Final Bell will handle it all for you.” 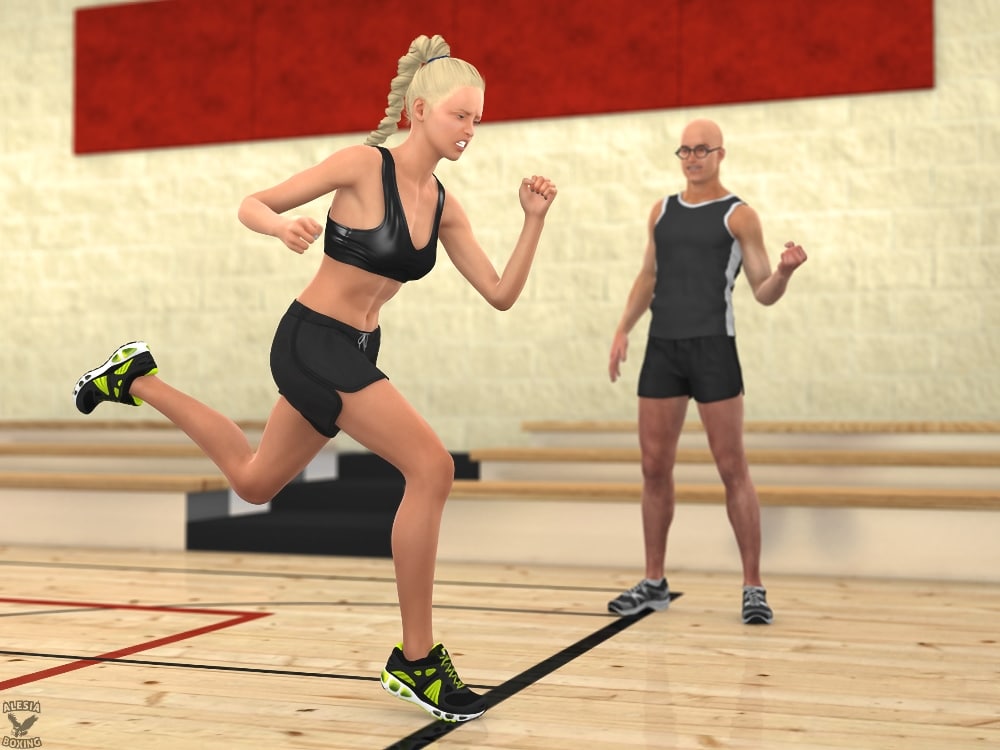 Near Munich – Sophie Schumann and her coach Regina are having a walk in the Alps. The joys of being in Bavaria. The mood is relaxed. Unlike years ago, these two enjoy spending time together.

Sophie: “I was thinking about something you said after my loss to Elsie. That I did nothing wrong. Still, I’m sure that we can make adjustments.”

Regina: “I already have a couple of ideas.”

Regina: “First, I have a question. Do you hold your personality back since turning pro?”

Sophie: “Hmmm. Yeah. I guess I’m scared of my reputation as an amateur.”

Regina: “Doesn’t mean you should become a delicate flower. Let your character express itself a bit more. There’s a beast in you and letting it loose would help you in the ring. It’s about intensity.”

Sophie: “Let me think about it. What else?”

Regina: “I trained you well with a classic style and the next step is making you more creative. You already show some of that skill naturally, and I want to push you in that direction. It will help to find solutions even against the toughest opponents.”

Regina: “We’ll work on that, but before we do, I’m sending you to France for six weeks.”

Regina: “You’ll work with Nadia Monteil. You’ve seen a lot of me. Nadia can take a fresh look at you and diversify your training. A change of scenery will be good before we get ready for the next fight.”

The coach thinks: “You’ll find out that Nadia more than agrees with what I just said. She’ll initiate the changes.”

Regina: “She’ll welcome you in two days, so I want you to get ready.” 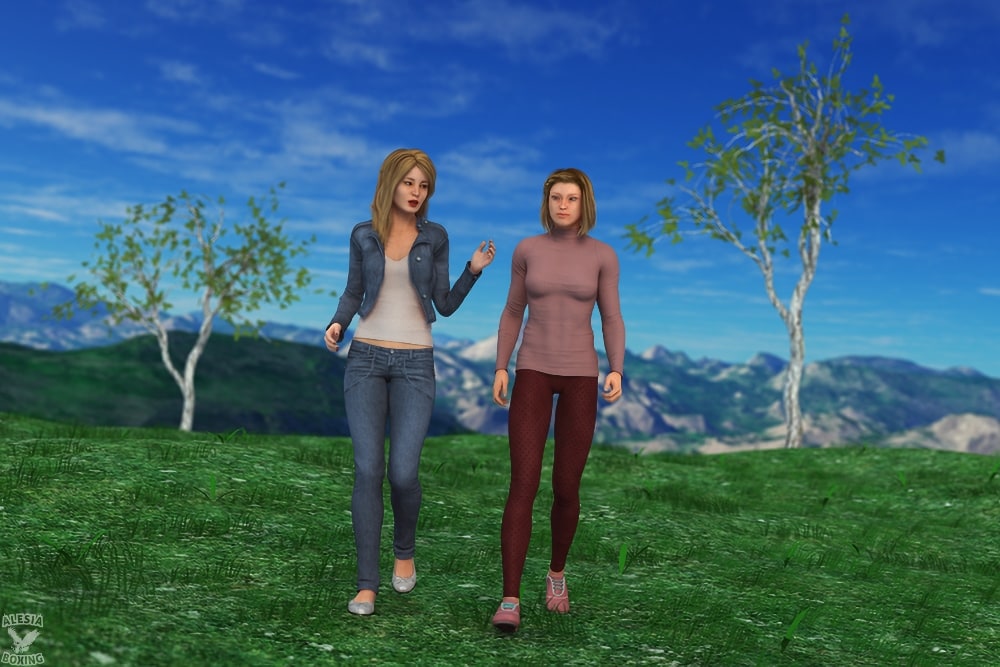 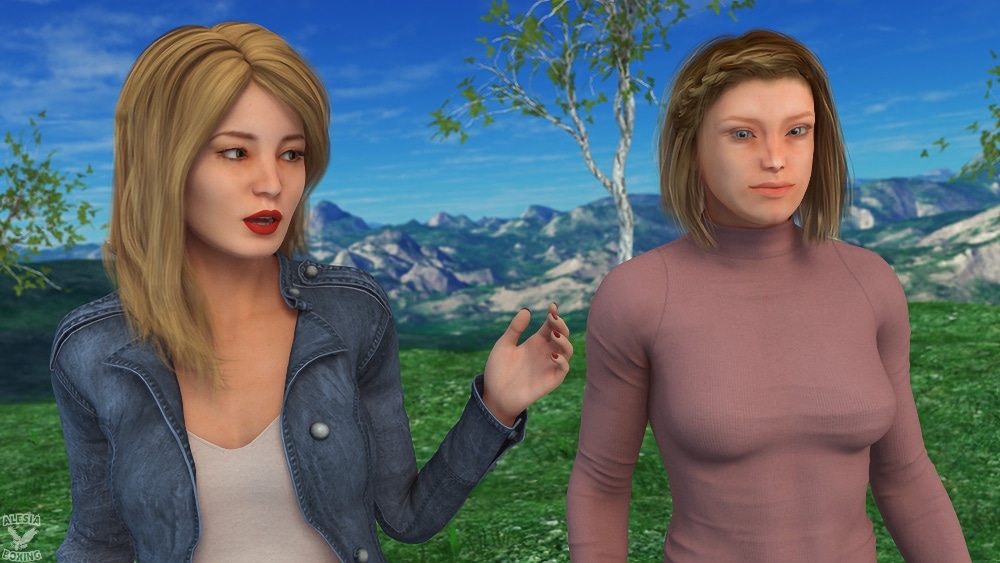 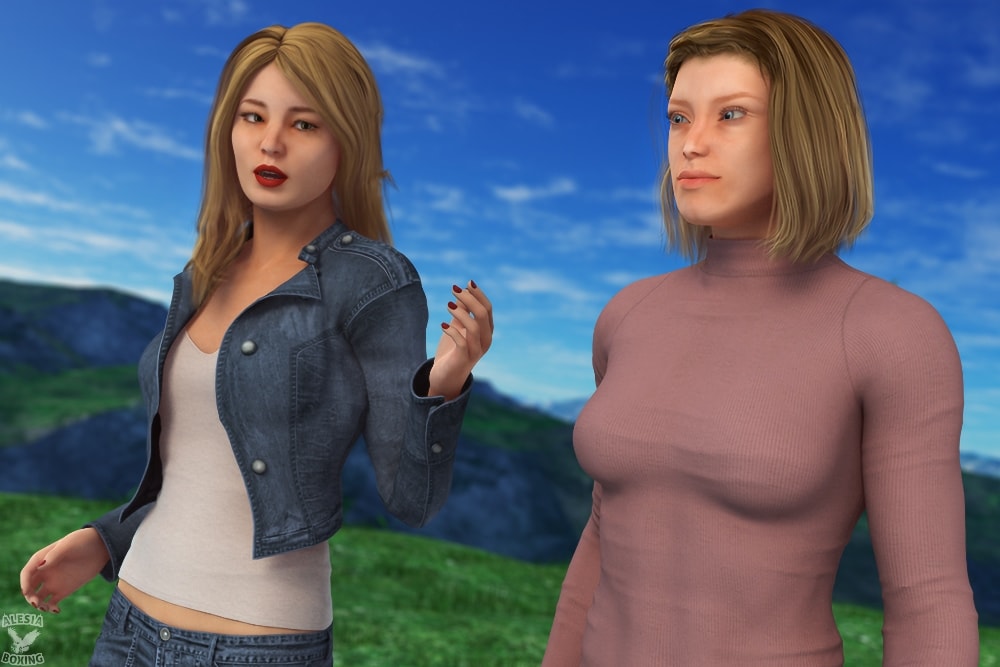 When Sophie makes it to the Paris gym where Nadia set up shop, she gets quite the welcome.

Sky Houghton laughs: “Some intern. Only part of the Top 10.”

The young German gets a welcome, an intro to her temporary gym and shelter at Sky’s flat. Being nurtured by a charismatic coach who was a dominant world champion makes this an impressive new experience.

Nadia teaches new tricks to the blonde, especially to increase the smoothness and creativity of her moves in the ring. Including keeping her hands looser for freedom. Sophie is very receptive to the influence, and overall enjoying this stint in France.

Nadia: “That’s it. Decouple. You can lean back with the legs and twist the body to put weight into a good shot. It makes you unpredictable.”

Sky, who spars with her regularly during those six weeks, notices something. “She doesn’t realise it yet but she’s learning to move like Zohana Patel. It will be something when this beast gets the hang of it.” 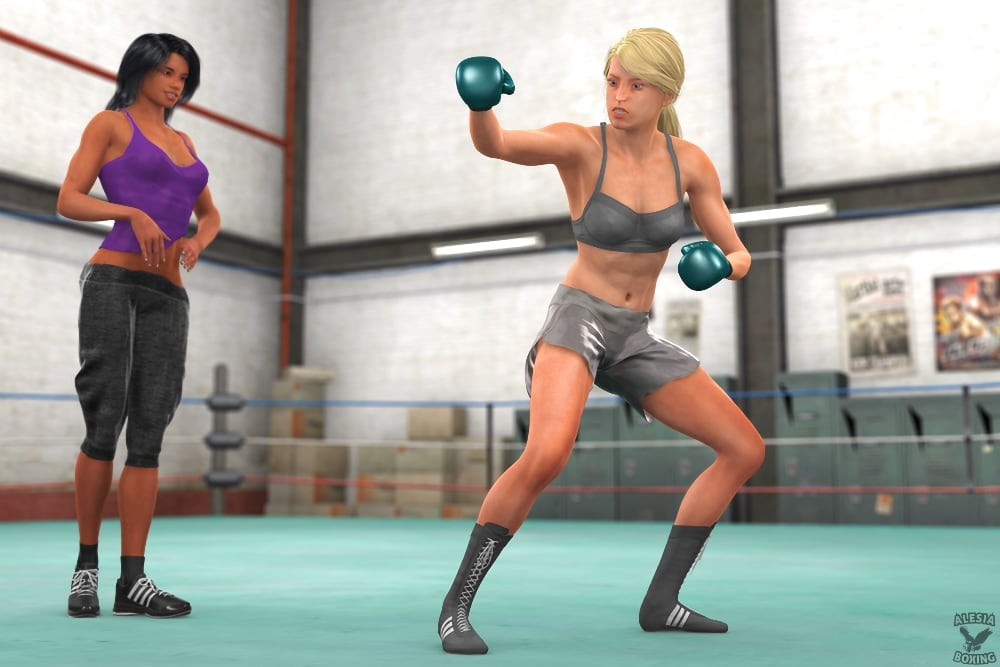 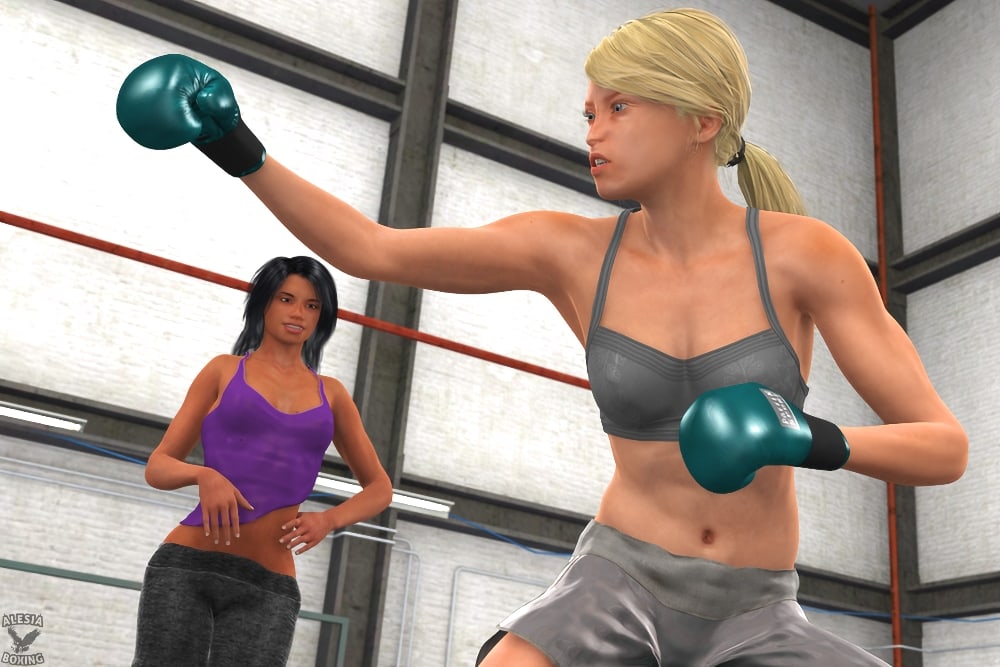 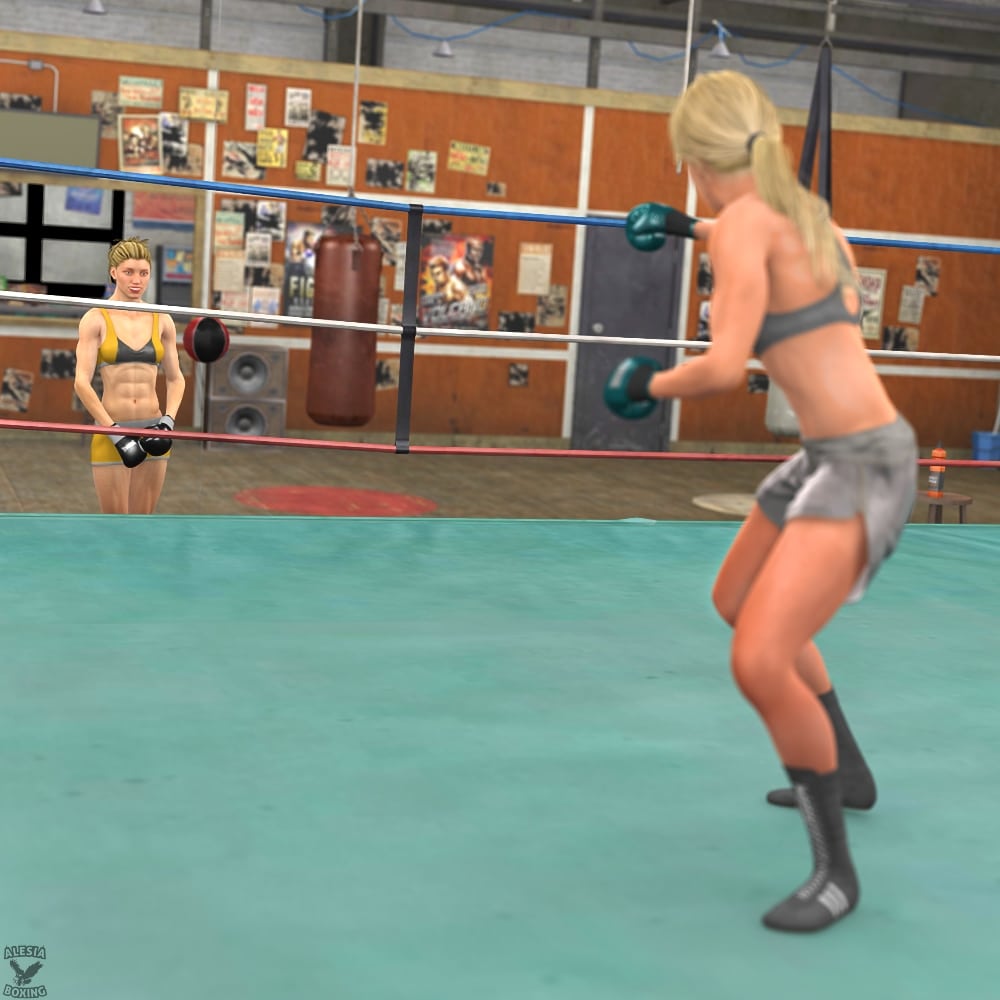 At the end of one of their sessions, the German comes up with a question.

Sophie: “Regina said I’ve been too tame since turning pro. What do you think?”

Nadia: “She’s right. I mean, don’t you realise what world champions do? How did I become one? Your sister Alesia? Zohana Patel? With a mental edge. Gotta make opponents nervous to be near you.” 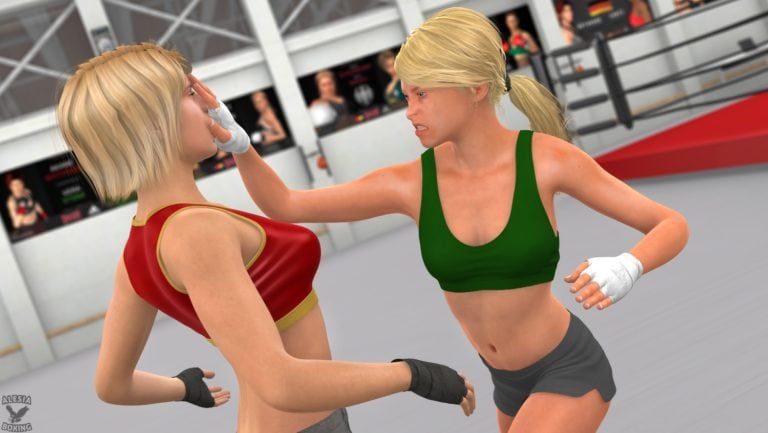 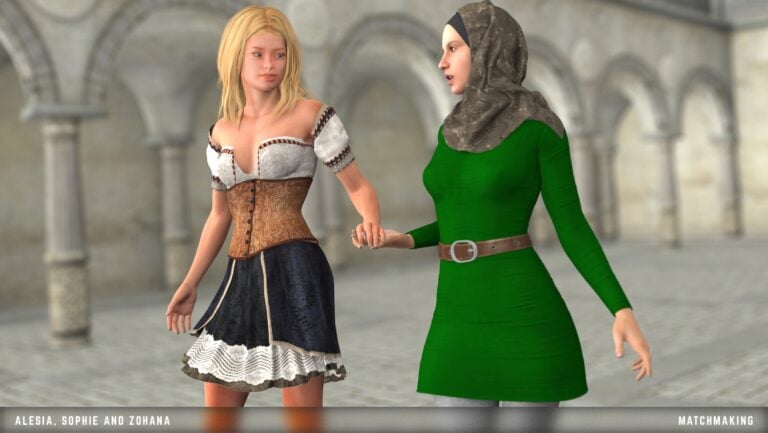 The little sister of Alesia Schumann is a born troublemaker but supremely talented puncher. The mandatory challenger in the Lightweight division.
Profile
basic HTML to style comments