Ring Kings and Star Sports 2 have announced today that kicking off the televised portion of their January 2022 card in Ottawa, Ontario will be a rematch between Mechelle Gauthier and Emma McGale for the Canadian Featherweight title.

The fight will take place over ten rounds of two minutes each. 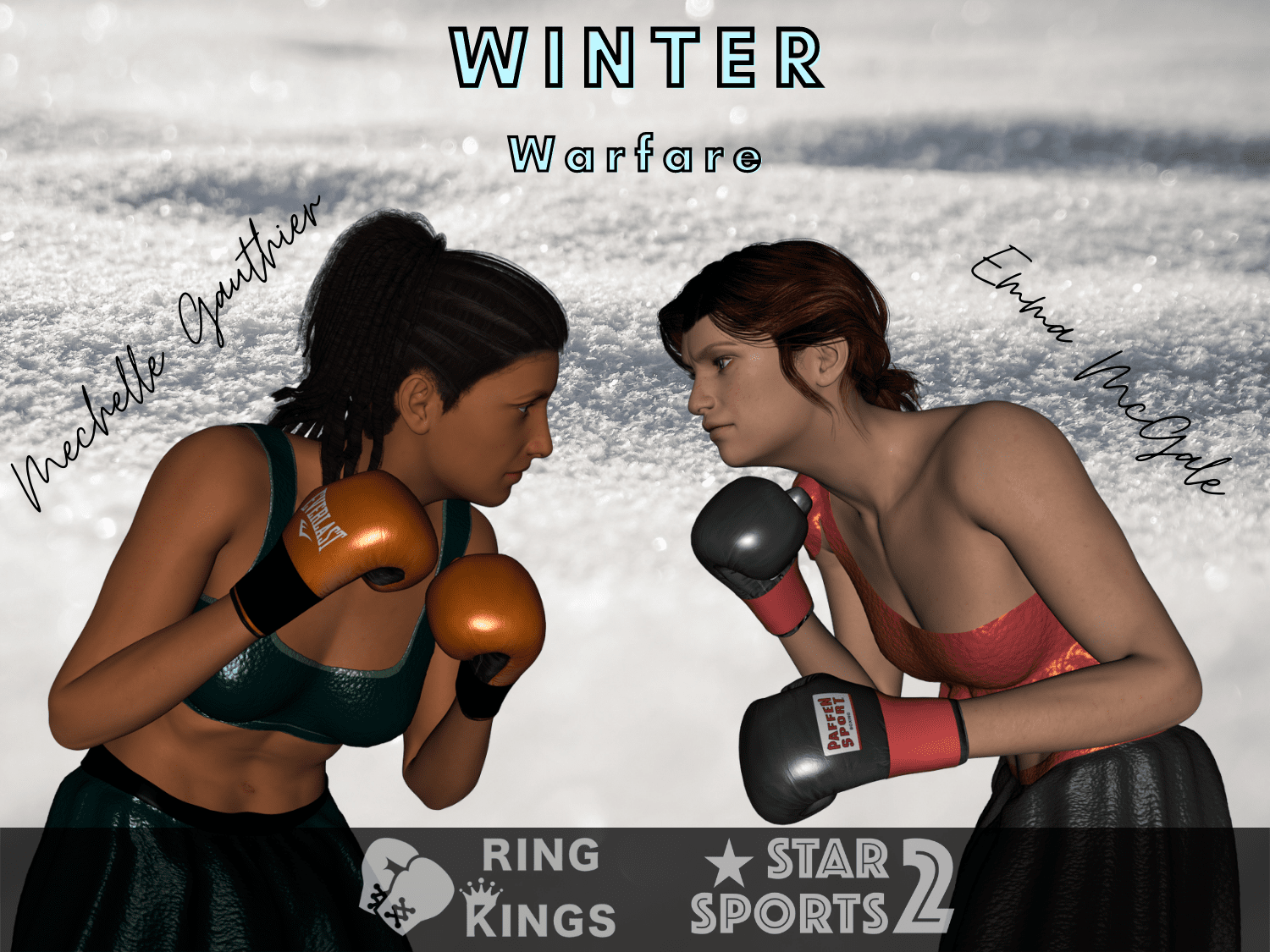 The defending champion, ‘The Pretty Warrior’ Mechelle Gauthier (9 wins, 2 losses) feels confident going into a rematch that she won by knockout in Round 9 of their last fight. “I won last time, and I don’t see why this fight will be different,” said Gauthier. “Emma gave me a heck of a fight and I respect her, but I intend to defend my championship in style, as befits a champion. I promise the fans a good time, and of course a knockout.”

The challenger, Emma ‘The Peach’ McGale, rebounded from her loss by decisively knocking out Australian Featherweight champion Vicki Groves in her last fight. Now with a new head trainer in Sandra Blohm, expectations are high for the challenger now 11-6. “I’m far better than my record suggests, and I intend to even out my record with Mechelle,” said McGale. “This time, the one on the canvas will be her. I will cement myself as the best in Canada.”

Tickets are on sale starting at $40 for presale and redeemable with the Final Bell app.

How the fight was made

Emma McGale is traveling to a city that she does not have particularly fond memories of: Montreal. Last time she was there, she got knocked out in her bid to win the vacant Canadian Featherweight title. Hardly a happy memory.

She was coming to the city on the invite of the victor of that fight, Mechelle Gauthier. Emma figured that she might as well combine this meeting with a short weekend vacation.

The two fighters meet at Mechelle’s home, a modern apartment in the quiet part of the city. The two exchange polite chit chat for a little while, as Mechelle plays the gracious host. Then, it’s down to business. 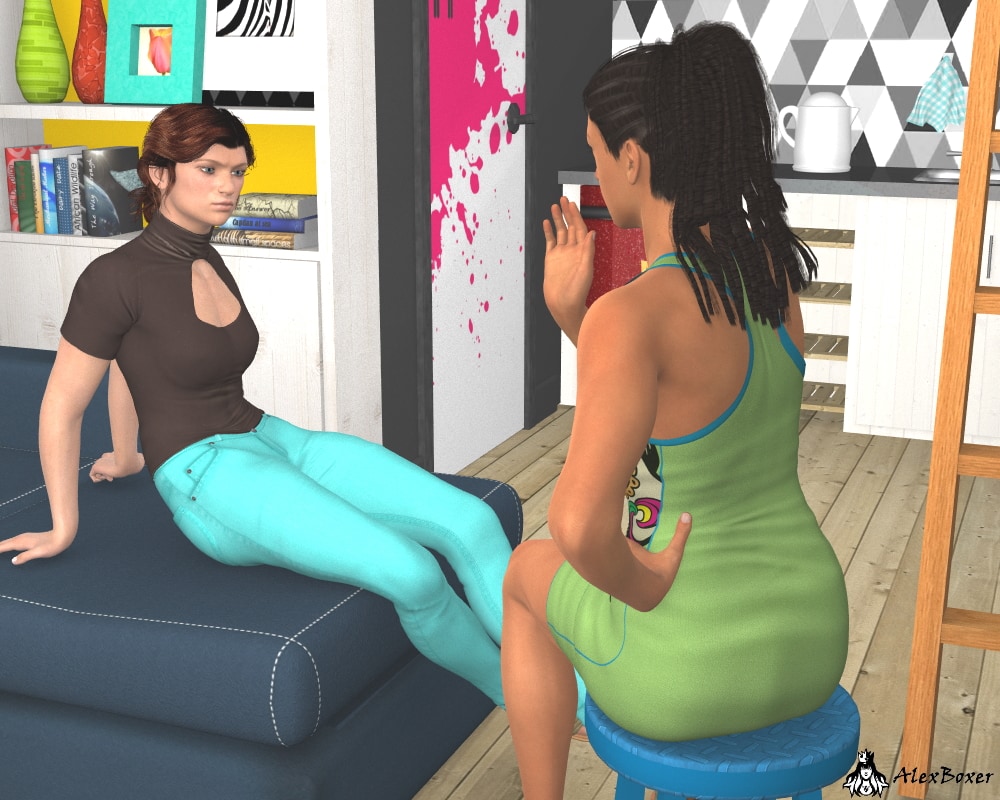 Emma: “I’m guessing there’s a reason that you invited me here, and it wasn’t to wine and dine me.”

Mechelle: “Well, my boyfriend is away for the weekend, so I needed someone to drink wine with. But yes, I obviously did invite you out here for a reason. I want to have my next title defence against you.”

Emma: “You didn’t need me to come here to ask me that. You know I’ll fight you whenever you want.”

Mechelle: “I know that. But I have demands for the fight.”

Emma: “Demands? This is a regional title, not a world championship.”

Mechelle: “Look, probably neither of us are going to fight for a world title. All I want, since you are signed to that fancy Final Bell or Ring Kings or whatever its called, I want the fight to be on Star Sports 2. I don’t want it to be on a streaming service that most of my friends and family have never heard of. I want to be on a main card, on TV. Get that for me, and I’ll give you your rematch.”

Emma: “I don’t control what promoters do. I can’t guarantee that. Heck, the only time I get on the main broadcast is when they want me to lose to some prospect they are hyping up.”

Mechelle: “Then I’ll just wait until you are made mandatory challenger for my title and we can fight then. I don’t mind waiting. Look. I want to make the most money I can – these title fights are the best money I make in this sport, and it’s still not that much. I want a title fight, where I get the champions split of the purse. That’s when its worth it for me to put my title on the line. Otherwise I’ll beat up some hopeless contenders here in Montreal while you wait.”

Emma: “You are being kind of a bitch about this. I thought we were on good terms.”

Mechelle: “I am. I like you, Emma. I enjoyed fighting you, and I’ll happily do it again. But I can’t ignore the finances. Not when I, for once, have the leverage.”

Emma: “You’re lucky you’re so cute. I’ll see what I can do. No promises though.”

Mechelle: “One more thing. I want a rematch clause.”

Mechelle: “Look, to make it easier, I don’t care where the fight is. I just want it to be on Star Sports 2.”

Emma: “And the money that comes with it.”

Mechelle: “Now you are catching on.” 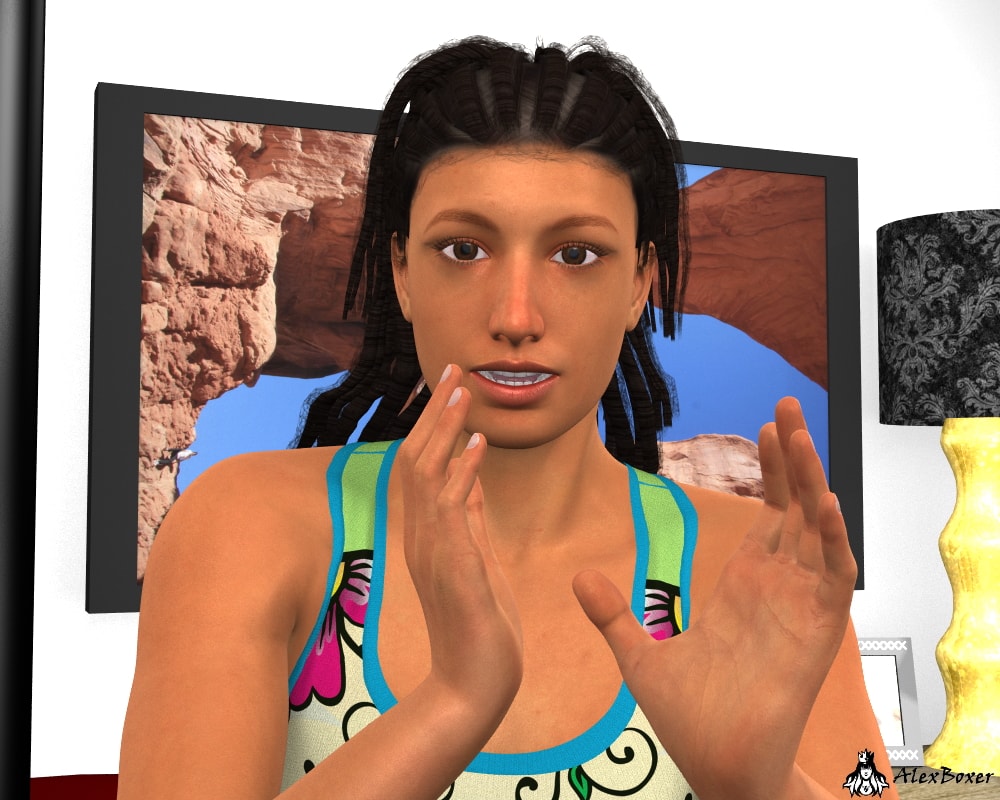 Mechelle: “Cool, now do you want and come see the city with me? I’d be happy to play tour guide. And dinner is on me.”

Emma: “I can never deny you. You are too cute.”

Back from her brief vacation, Emma goes to visit with Anita Martin. No longer head of Cobra Promotions, she has been made a regional manager for Final Bell. A little bit lesser of a role, but within a far larger company. Emma needs Anita to go to bat for her to get the fight made.

Anita: “Bright and early on a Monday morning. How can I help you, Emma?”

Emma: “I had a face to face meeting with Mechelle Gauthier over the weekend. She wants to fight me for the Canadian title.”

Anita: “Great! I assume they want to put it on one of their cards, so maybe I can reach out to Ricota Promotions and see if I can help in any way.”

Emma: “Ah… well, here’s the hitch. She had a few conditions for the fight. The big one is that she wants it to be on Star Sports 2.”

Anita: “Oh. So she wants it to be on one of our cards. Emma. Card space is so limited, we don’t just put anyone on those cards. And you are asking, not just to be on a card, but have a title fight on that card, which means it needs to be 10 by 2 minute rounds – that’s just such a time commitment. And it can’t be on just any card, it has to be a fight card in Canada. I don’t think I can get them to go for it. I don’t even think I can ask.” 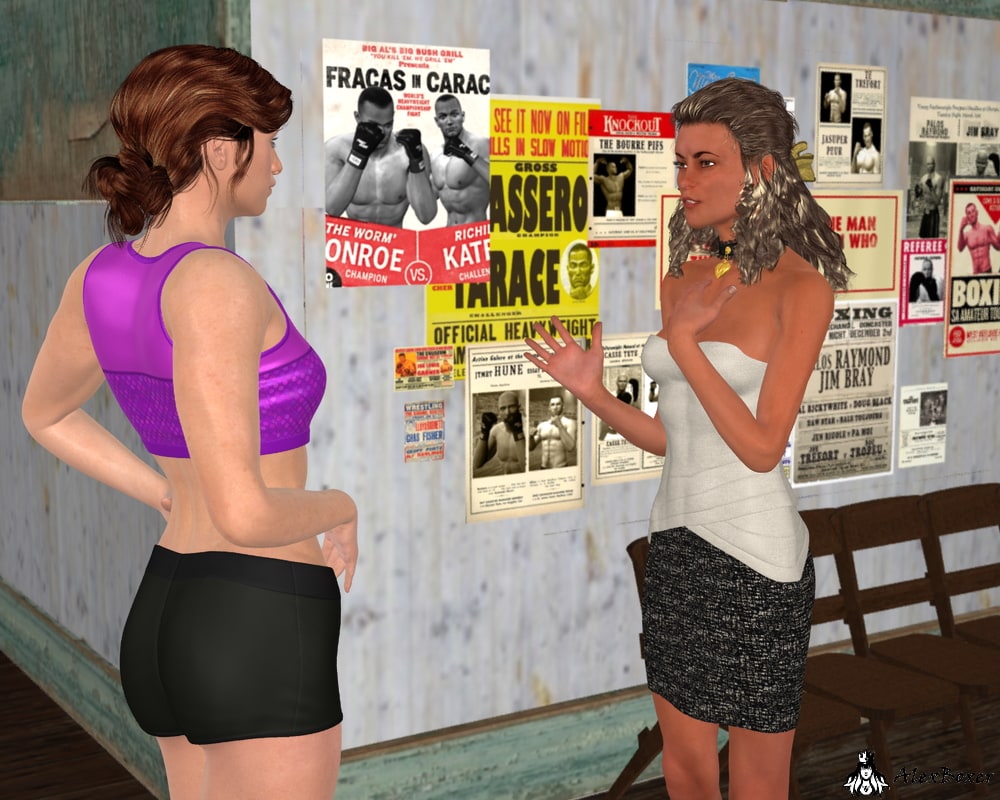 Emma: “We are talking about one fight. A rematch of an action packed fight with several knockdowns, between two, dare I say, quite attractive young ladies. I’m not asking to be the main event. I’m asking to replace one fight between a half decent prospect and some journeyman from Ecuador with a completely fabricated record.”

Anita: “Look, that fight isn’t without its financial merits. But, this isn’t Cobra Promotions anymore, where you are the best friend of the owner. This is Final Bell. Where there are shareholders that we report to. Shareholders that care only about the bottom line.”

Anita sighs and shakes her head.

Anita: “Look. I’ll see what I can do. Because its you, and I like you a lot Emma. And I think there is merit to putting on a good, well contested fight on a fight card instead of prospect ‘A’ beating up journeyman ‘B.’ But it’s going to come at a price.”

Emma: “I’ll do whatever it takes.”

Anita: “You won’t like it. This one favour means you can never say no to another fight. And they will want you to pay them back. They’ll put you in against fighters that outmatch you and not give a shit. Just think about if its worth it.”

Emma: “I need my shot at Mechelle. I’ve already been thrown to the wolves. If I have that belt around my waist, at least I’ll have something.”

Anita: “Okay. I’ll make some calls. But no promise. And Emma? If I make this happen, you owe me.

There’s radio silence from the regional manager for almost two weeks. But out of the blue, Emma gets a call.

Anita: “You are the luckiest girl on the planet, you know?”

Emma: “Tell me that you got it done, Anita.” 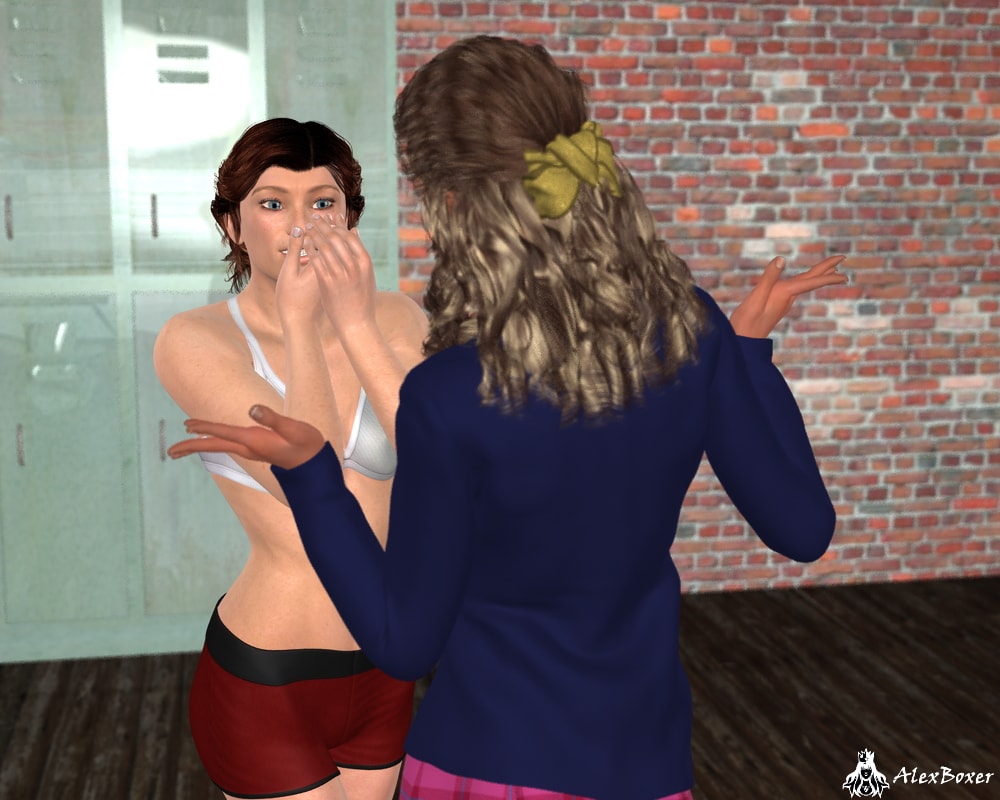 Anita: “A fighter just dropped off our card in Ottawa in three weeks’ time. With that little time left, the choice was either bump a fighter from the prelims to the main card, or find someone who doesn’t mind fighting on short notice. You don’t mind, do you?”

Emma: “Fuck no. If the fight was tonight, I’d be sprinting to my car already. Mechelle agreed? To a short notice fight?”

Anita: “Her promoter wrangled a really good purse out of us. But there wasn’t that much choice. A local contest was what we needed to sell tickets. This fight fit perfectly. She gets a decent payday and airtime on Star Sports 2.”

Emma: “Holy shit, I don’t believe it. I didn’t think you could make it happen.”

Anita: “Emma. I’m telling you, you better win this one, and it better be the fight of the night. I stuck my neck out on this one for you. If you don’t win, I’m not sure we are on speaking terms anymore.”

Anita: “Call your coach. You need to sort out a camp, and pronto. And Emma?”

Anita: “Remember to thank me in the post-fight acceptance speech. My kids find it amusing when their mom gets a shout out.”